Traveling with Don is always an adventure, as he is not content to take the road “most traveled.”   You can always be sure there is going to be some wild and crazy adventure involved, even if it is just a day trip.  And since he speaks better Spanish than me as well as being the “alpha dog” in the family, I am always eager to follow.

This time, it was to discover another one of Mexico’s “Pueblo Magicos,” or magic towns.  As mentioned before, these are a group of small towns that have earned the designation from the Secretariat if Tourism for their natural beauty, cultural or historical significance.   So far, I have only been to half a dozen of these towns, but each one has had a “certain ambiance.”  There is never enough of an attraction to warrant UNESCO World Heritage status by any means, but enough palpable charm to make me grateful Mexico has taken steps toward preservation.    If I had the time and the language skills, I would wander Mexico until I had covered the entire list, as I haven’t visited one yet that I didn’t enjoy.

The entire state of Oaxaca has only one town with the Pueblo Magico designation, “Capulalpam de Méndez.”  Try saying that with a Texas twang!   I spent a day there, and I still can’t say it!  (Maybe “Kah’-pool-YAH-pam???”) 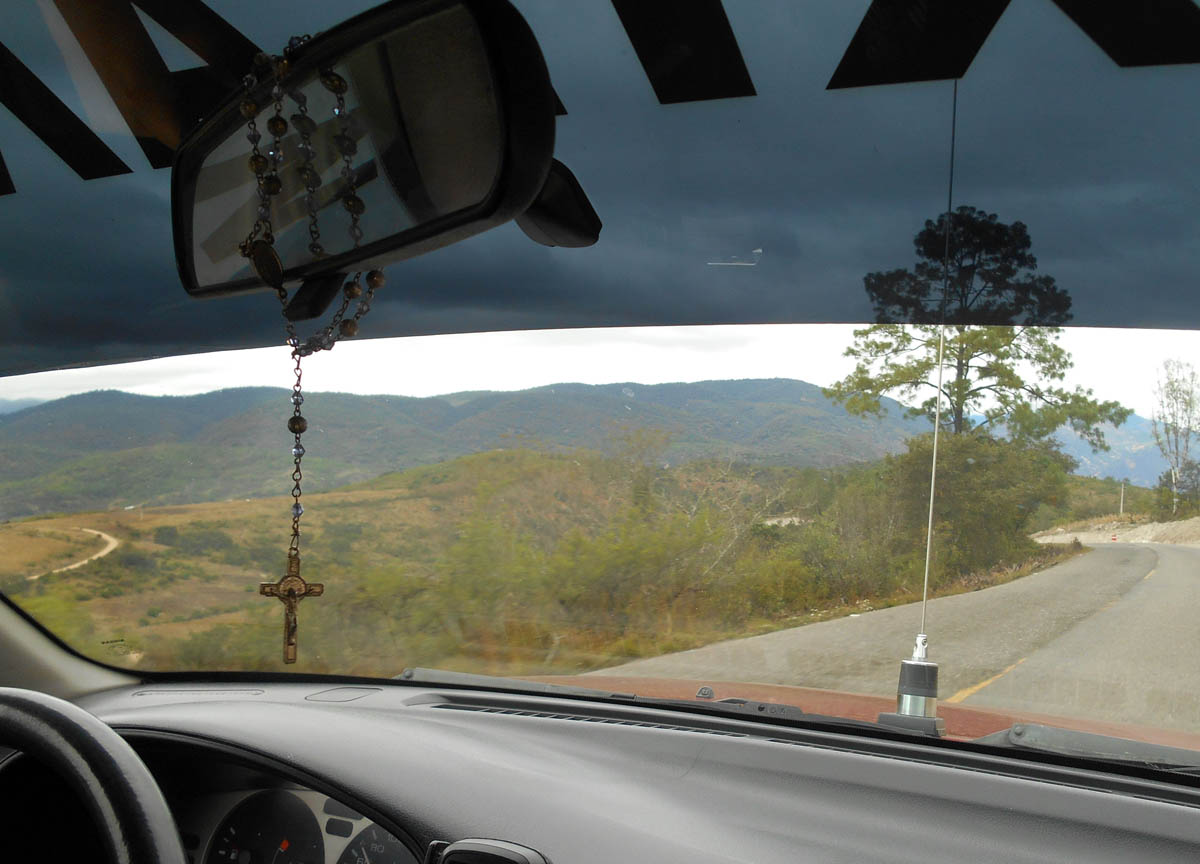 Rosary on the Rearview — Comfort or Concern?

It would take a total of three different automobiles to get us up to the mountain village – first a local to get us to the “colectivo” station.  A colectivo is a shared taxi.  They typically hold four passengers, so one must wait until they fill up before they will depart.  Next leg was the shared colectivo for the 90 minute ride up the narrow, winding road to Ixtlan.  Finally, a third colectivo would take us the final 10 kilometers into Capulalpam.  All this transport for almost two hours through the mountains costs under $10 per person! 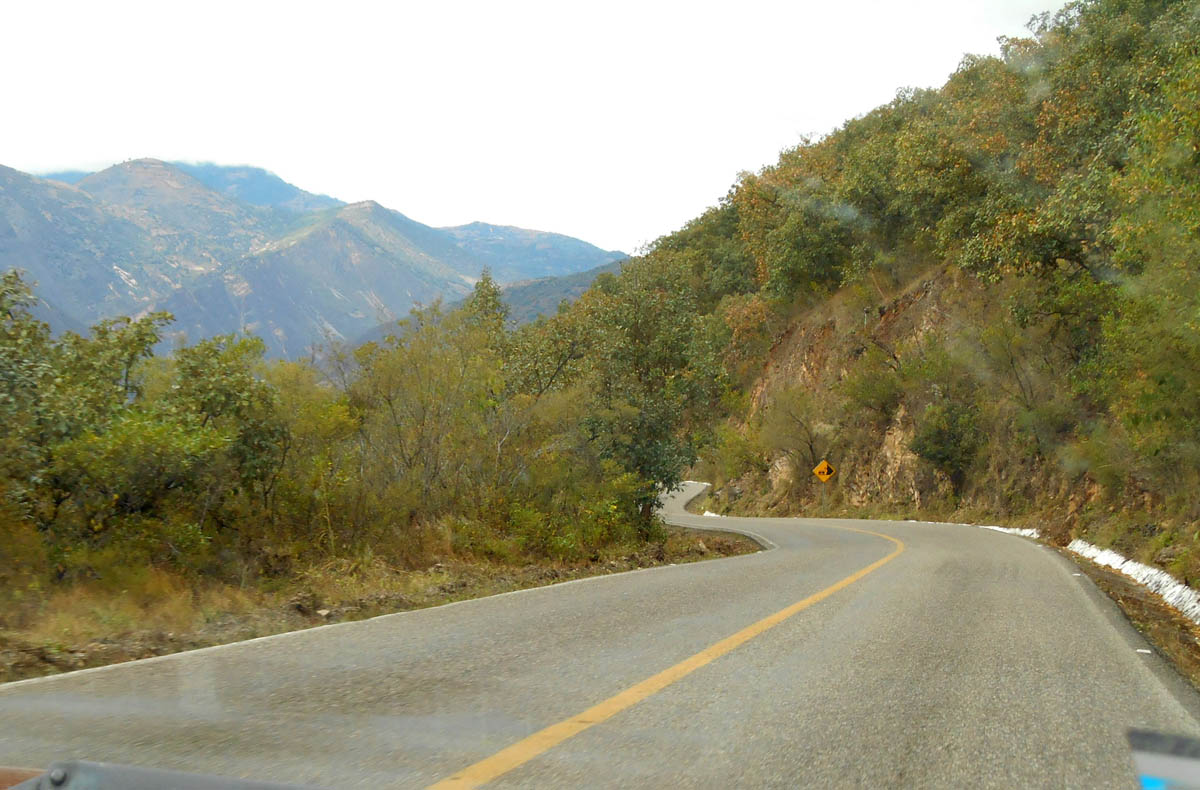 In spite of the fact that Don has a propensity for motion sickness, he made the ultimate sacrifice in giving me the front seat on the crazy, curvy ride up.  The scenery was breathtaking (though I did glance in the back seat occasionally to make sure he was not hanging out the window hurling, like he has been known to do!)  There were MANY opportunities to encounter two of my favorite road signs.   I think they sound so romantic and full of passion.  “Curvas Peligrosas,” for “dangerous curves” and “Camino Sinuoso” for “winding road.”   I always get excited when I see these two signs up ahead! 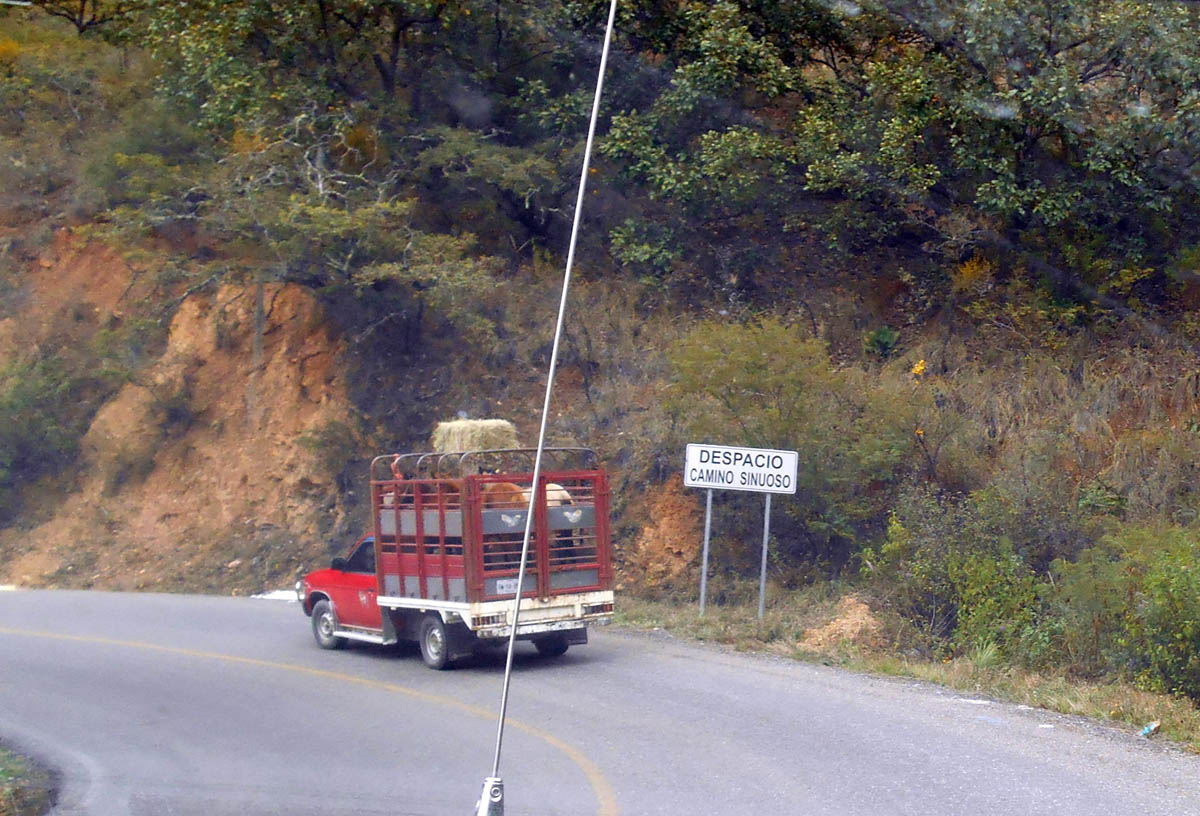 The little town of Capulalpam was spotless — very colorful, as well as quaint.  But it was also a bit deserted, as there seemed to only be a couple of tourists wandering around.  And we were noticeably the only Gringos. 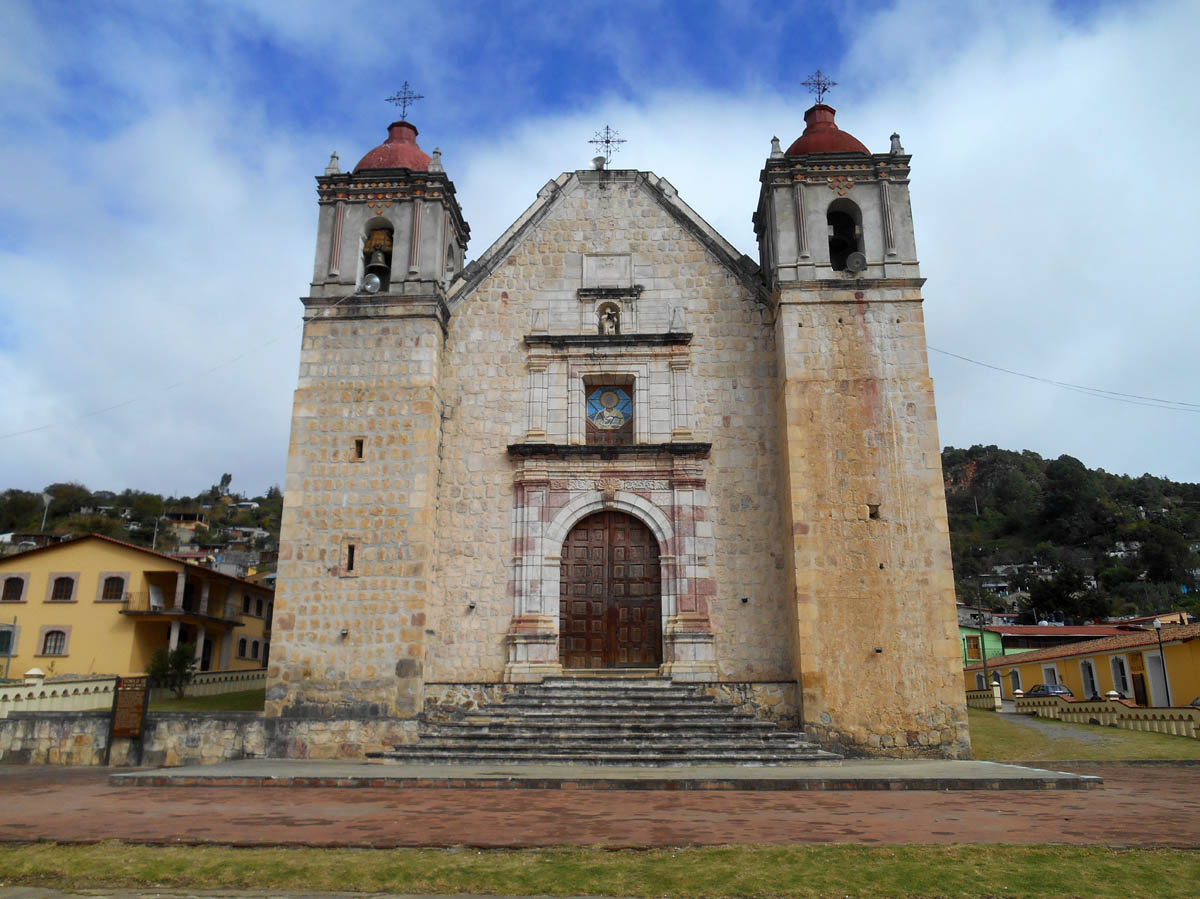 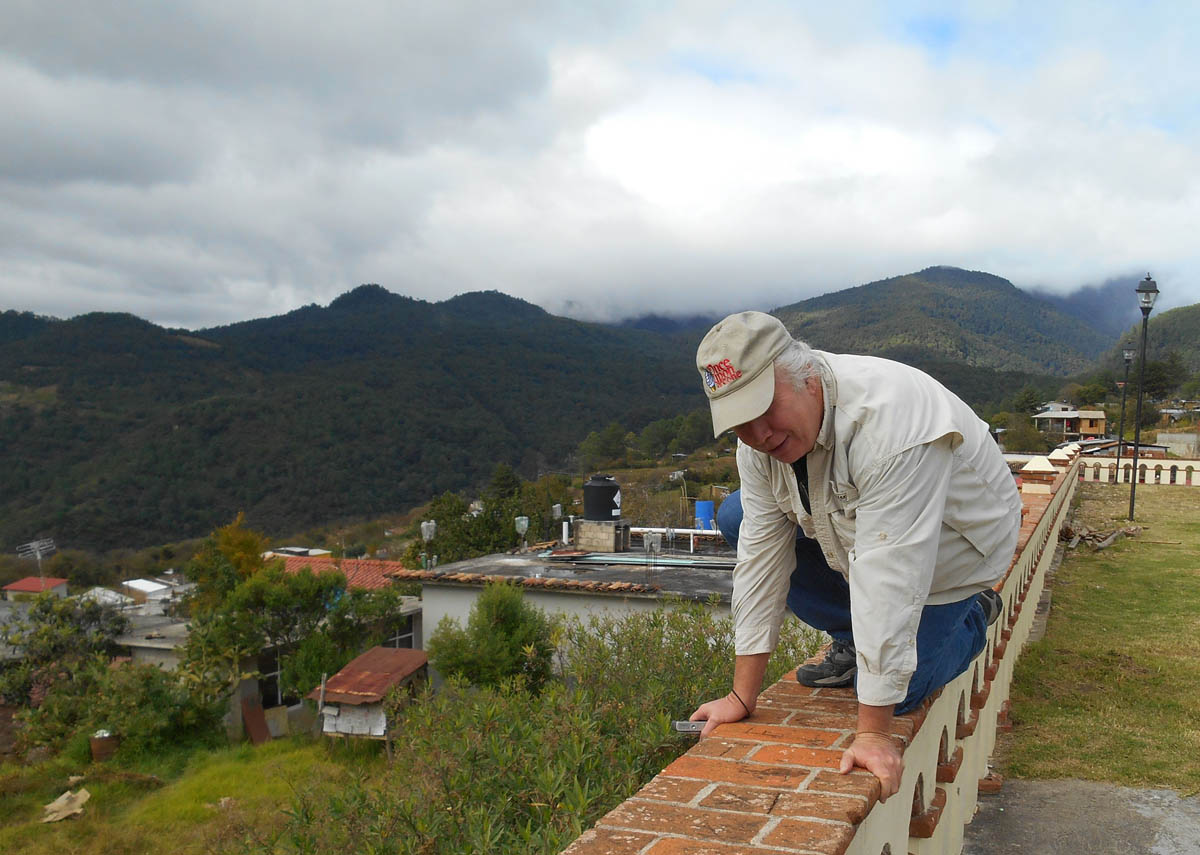 He will do anything to “one-up” me on a photo! 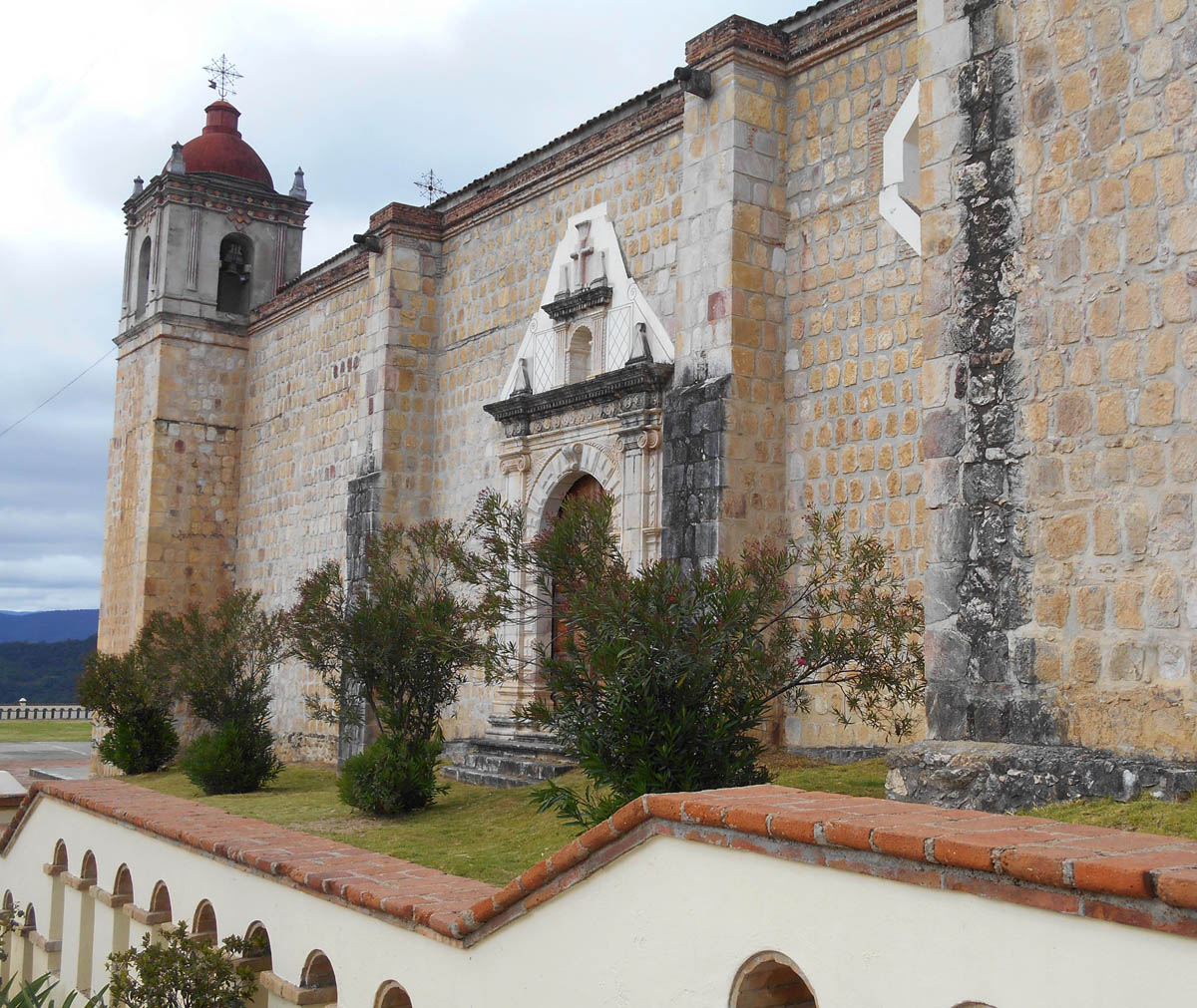 One of the things that stood out right away is that EVERYONE I met in the street spoke.  Not just a smile and a nod, but an actual auditory greeting!    It took me a few disconnects to finally get used to this, as I would typically be three steps past the person before I translated the “Hola, Buenos Tardes” into a greeting addressed to me personally, realizing I needed to turn around and greet them back. 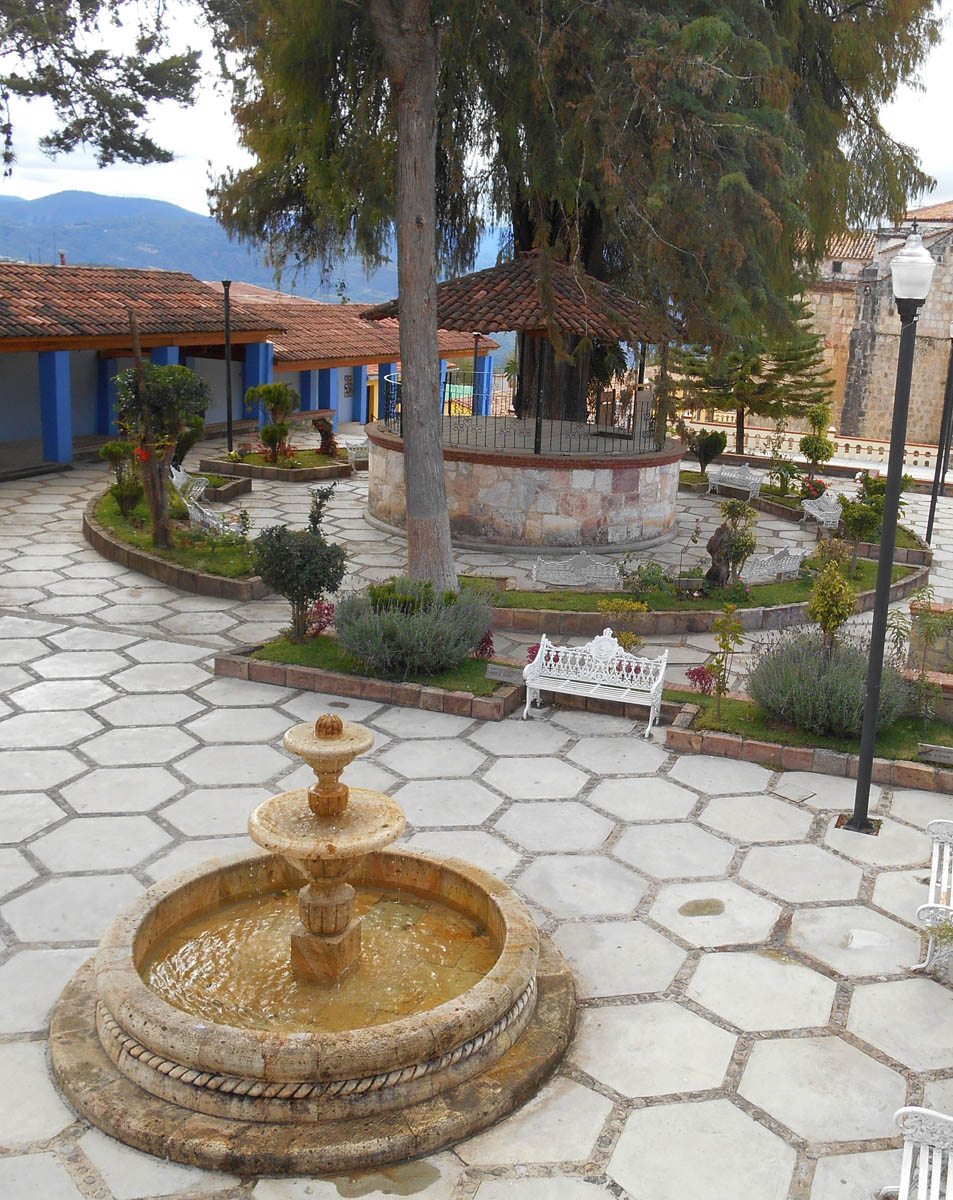 This is one of the cleanest towns I have seen, not just in Mexico! 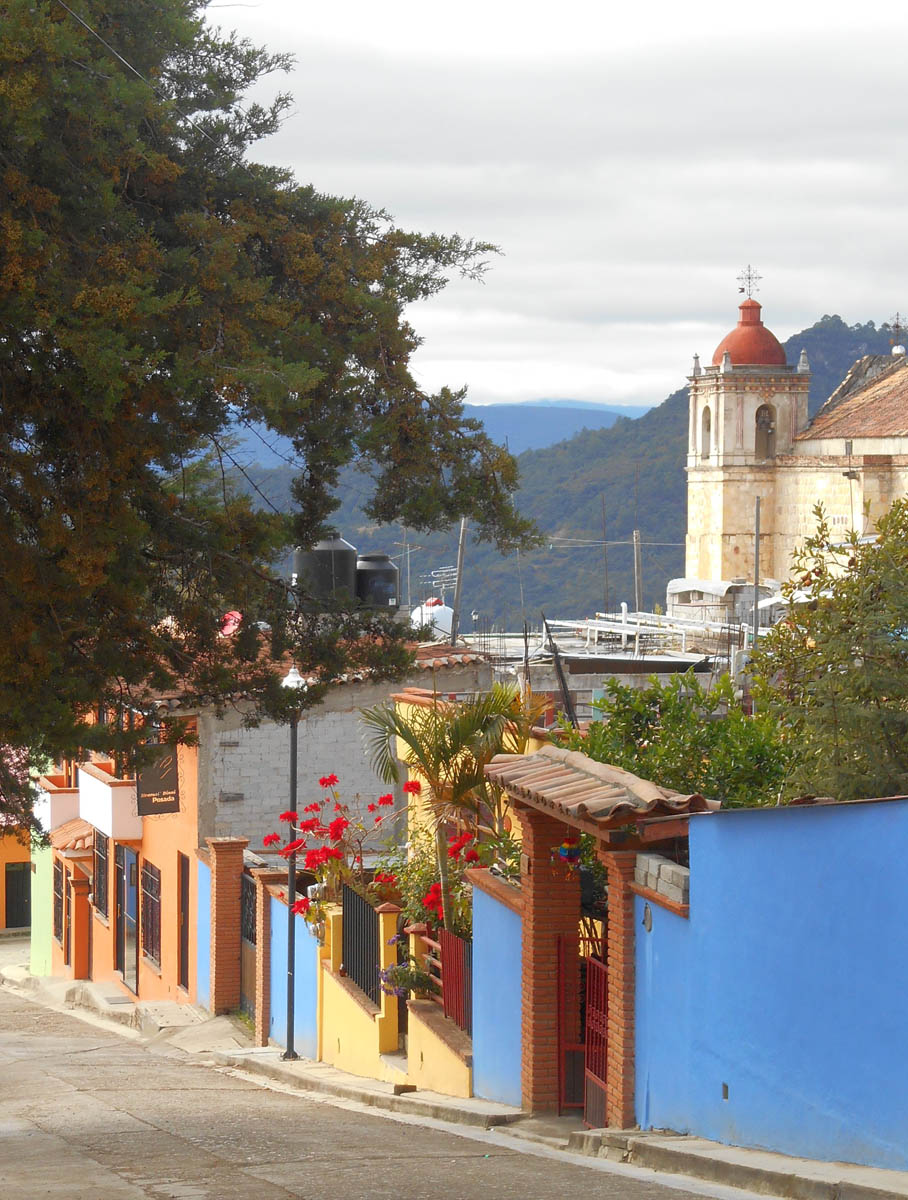 There weren’t a lot of tourist attractions in the town.  Just a quiet, quaint, remarkably clean little fresh-air mountain town in the pine forest.  They have a natural “healing center” with a Temazcal (sweat lodge) that they are trying to build up.  There is also a very fancy market for artisans which was empty, save for a couple of outdoor lunch stands where we enjoyed a bowl of hot chicken and pasta soup. 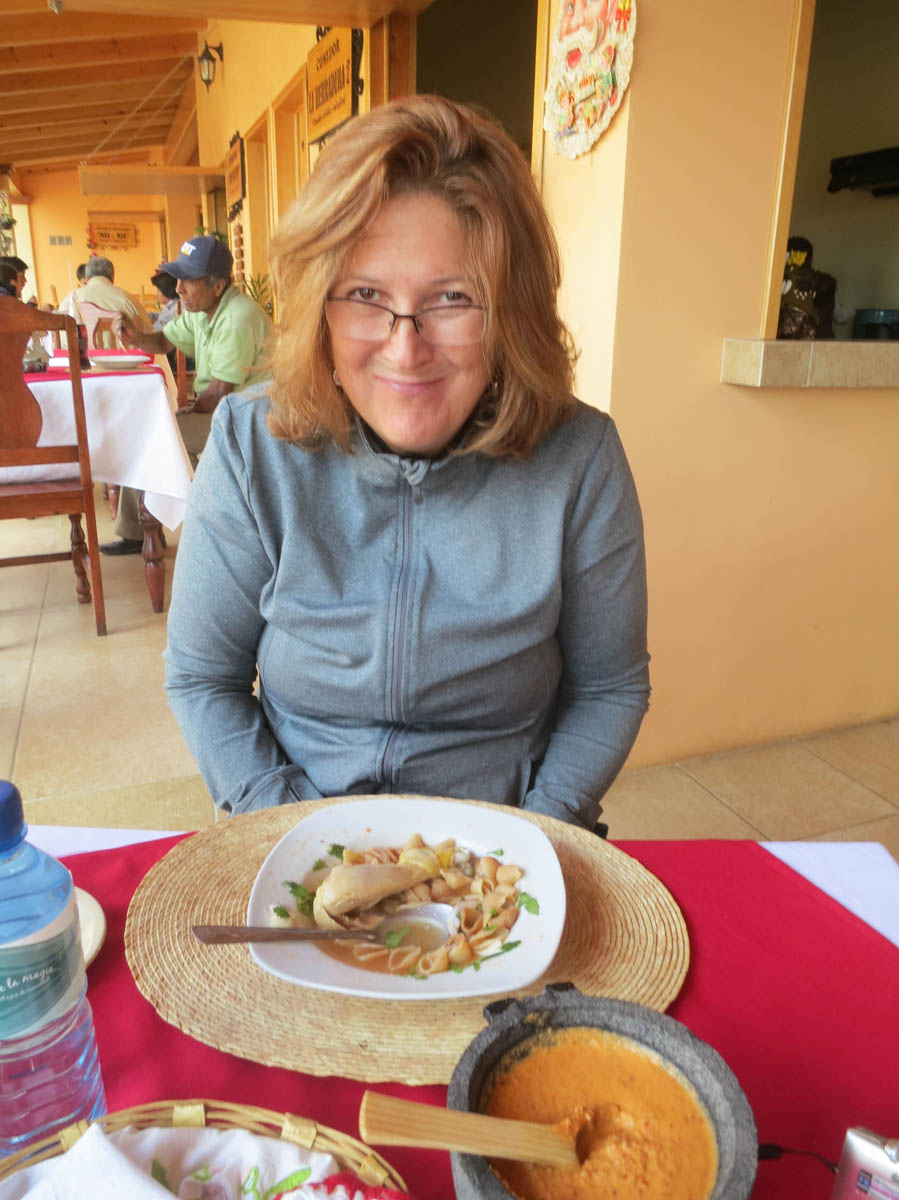 Can you tell I am COLD??

Like with most Mexico cities, the town centers around what can often be a disproportionately huge church.  At Capulalpam, it seemed even more so as the massive structure, built in 1735, occupied several blocks, and towered over the surrounding one-story buildings in the village.  The church was locked up tight, so we kept asking everyone around town when it opened.  Every inquiry netted a different answer until finally the young interning doctor at the “healing center” got on the phone and called someone to come let us in!  😉 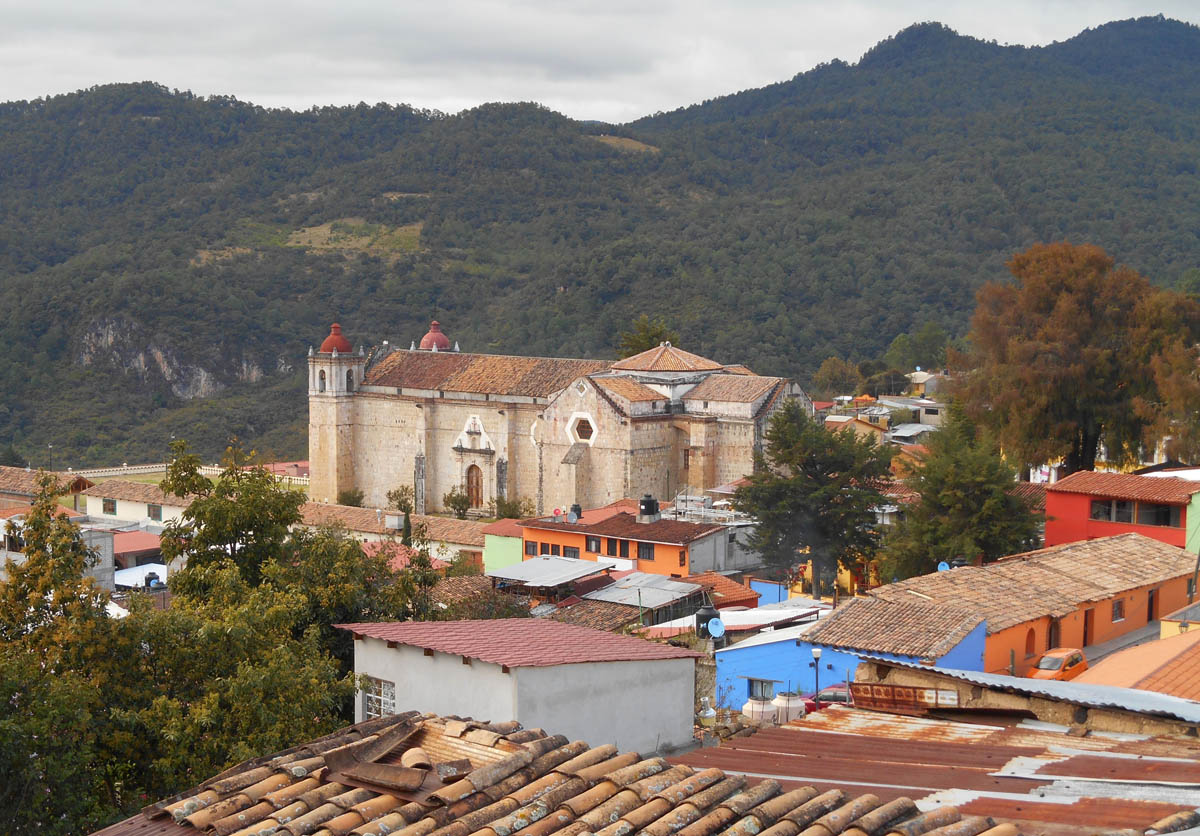 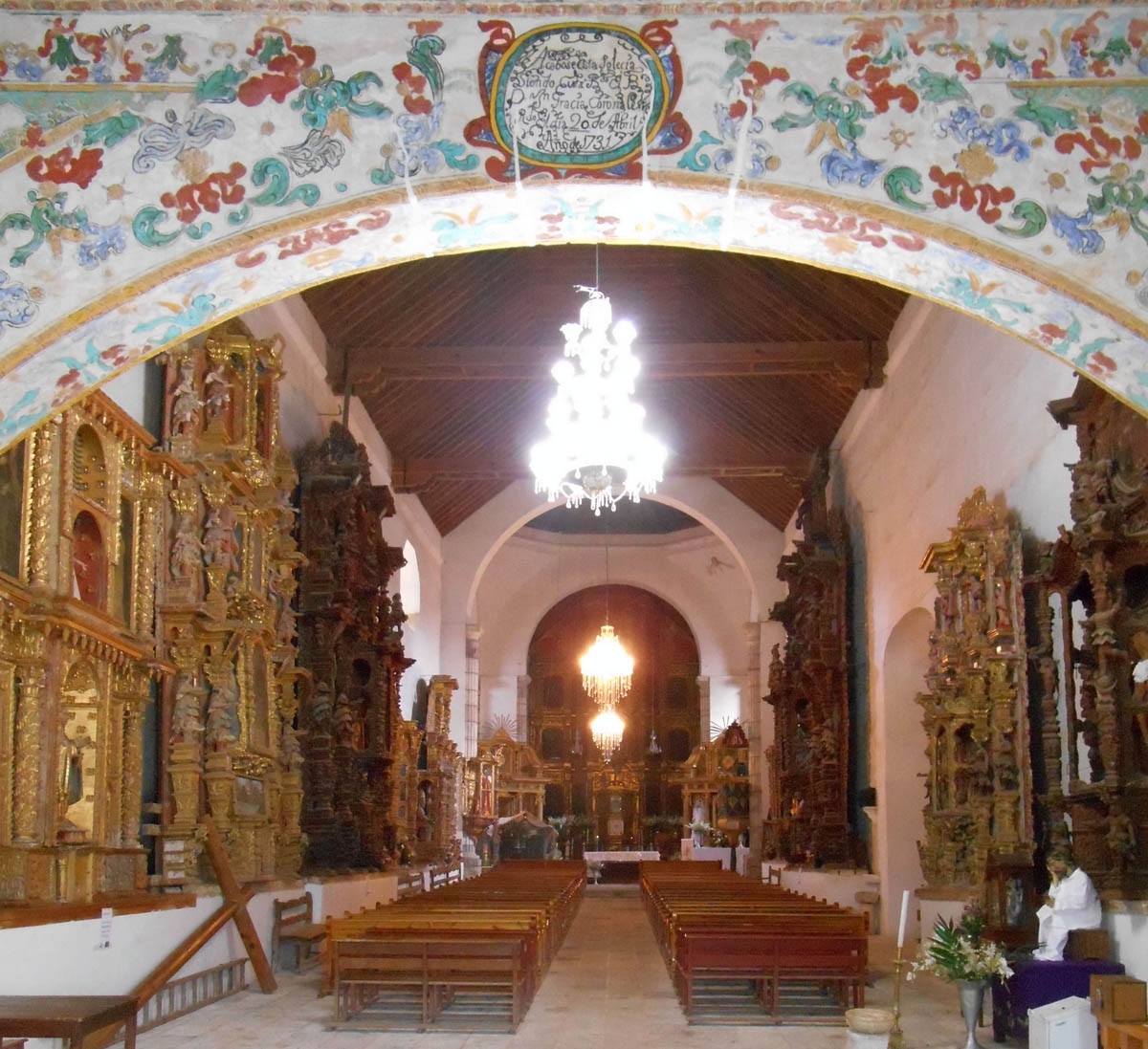 By now, it is getting late, and we decide it is a good idea to head on down the “curvas peligroso” before it gets dark.  In our haste to get the adventure underway, I failed to think through the temperature difference at 6,600 ft elevation, so I was now starting to move from chilly to uncomfortable in my capris and flip flops.   So we wait for our  first colectivo from Capulalpam down to Ixtlan, three out of four passengers present, but we must wait for a fourth.  Finally, we decide we are losing daylight, so we pay the extra 16 peso (a little over a buck) for the fourth seat, and we are on our way…..until, that is, we arrive at Ixtlan.

On the way up, we had just been dropped off in the street, so we had no idea there was a “colectivo station” where we needed to go wait in the return taxi queue.  The colectivos stop running at 7:00pm, and it is 70 kilometers back over the mountain roads to Oaxaca.  The “station,” little more than a tin-covered gravel lot with chairs lined along the walls, is packed.   As taxis pull in, everyone stands up.   The front four people exit to the taxi, and the rest of us move around the circle to the next available chairs. 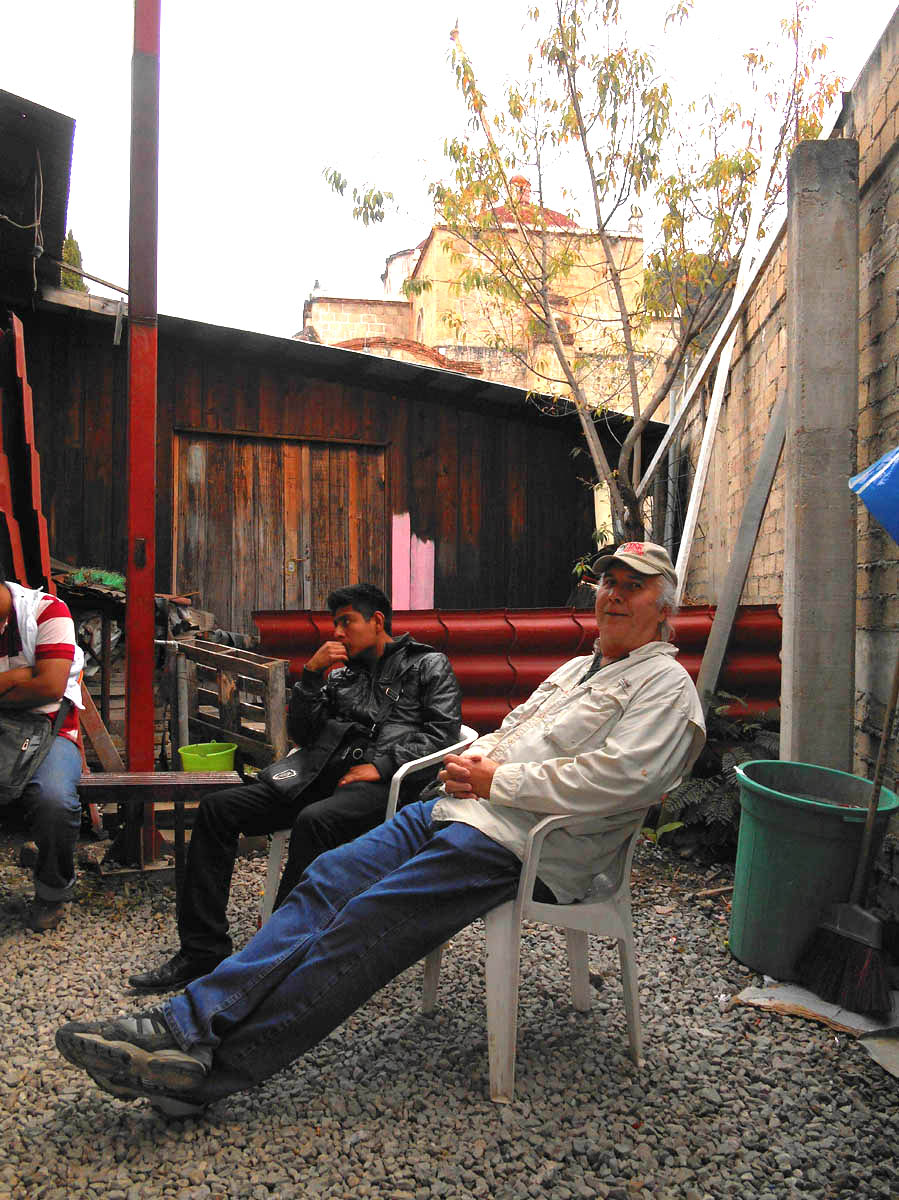 Waiting in the colectivo queue 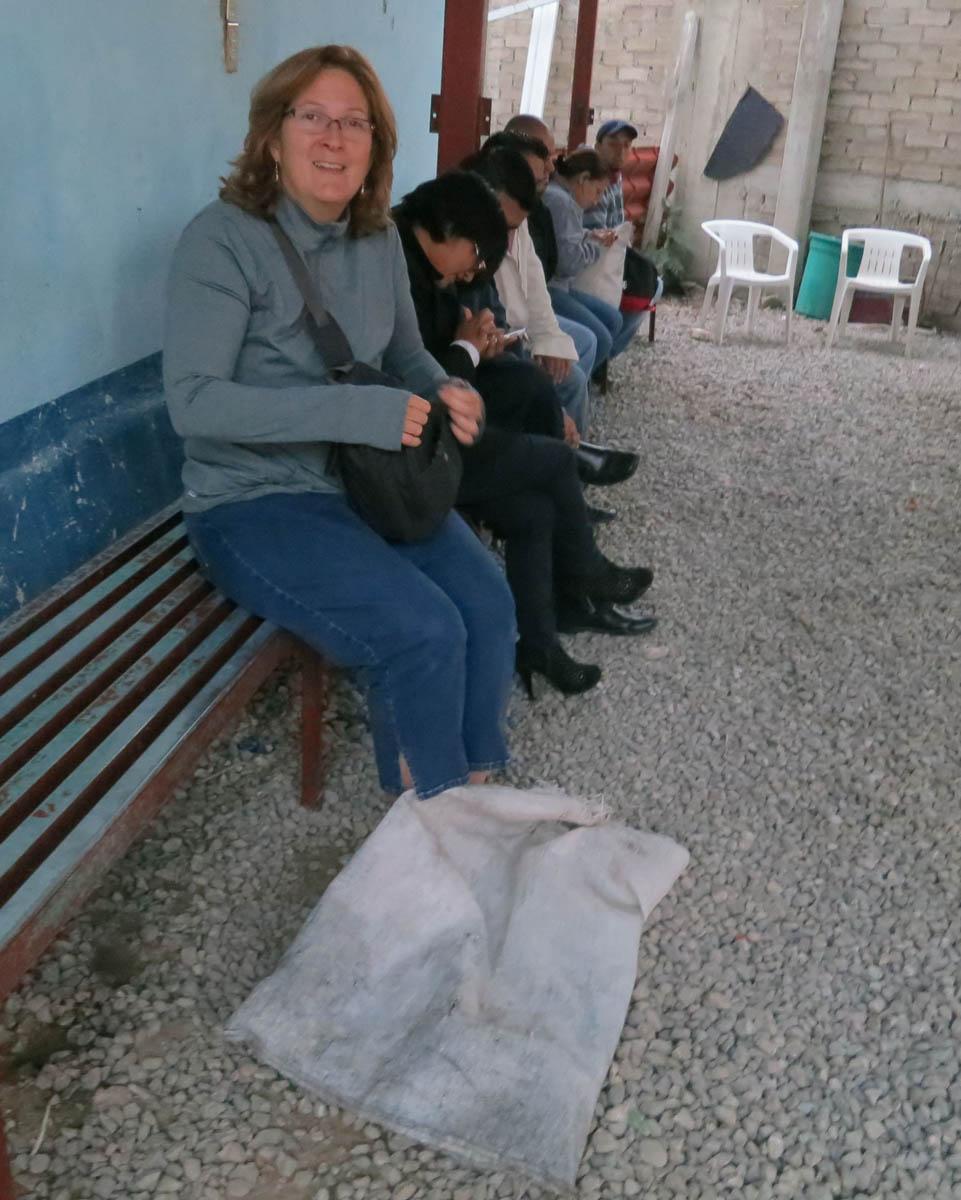 My feet are freezing in flip-flops, so my thoughtful brother fashions a “blanket” from an old sack for warmth.

I begin to do the math.  There are about 25 people in front of us, and taxis are arriving at a rate of one every fifteen minutes.   We would be in the seventh taxi, with only an hour till closing time.   We begin to discuss our options.  We could head back up the hill to Capulalpam and rent a hotel for the night, but we had no clothes, no toiletries, and worst of all, no laptops!  😉

Finally, they begin cramming FIVE people into the taxi, with driver makes six.  It is dark as pitch outside, and we are facing a long ride of “dangerous curves” to get back to Oaxaca City. We are up next in the queue.  I say to Don, “There are no seatbelts in the middle of the front seat.  When it is our turn, make a bee-line for the back doors!”

We scramble around in time to get a back seat, but the driver has the window down all the way, and by this time, it is FREEZING.   Don asks the driver to please “Cerrar la ventana, por favor?”   Once the drivers-side window is closed, we realize why he had it down….we are being gassed to death with an exhaust leak!  We are gonna be fast asleep by the time we reach the city of Oaxaca – I can see the headlines now, “Dead US tourists found in the back of a taxi – Details at 11!”   Not dead from the narcotraficantes as expected, but rather from narcolepsy brought on by CO2 poisoning!   So down go the windows again, and I resort to a game of “counting kilometers” as we begin our winding, hilly ride down through the darkness.

People often ask me, “As a ‘world traveler,’ what is the one item you couldn’t travel  without?”   Now, you know my answer… 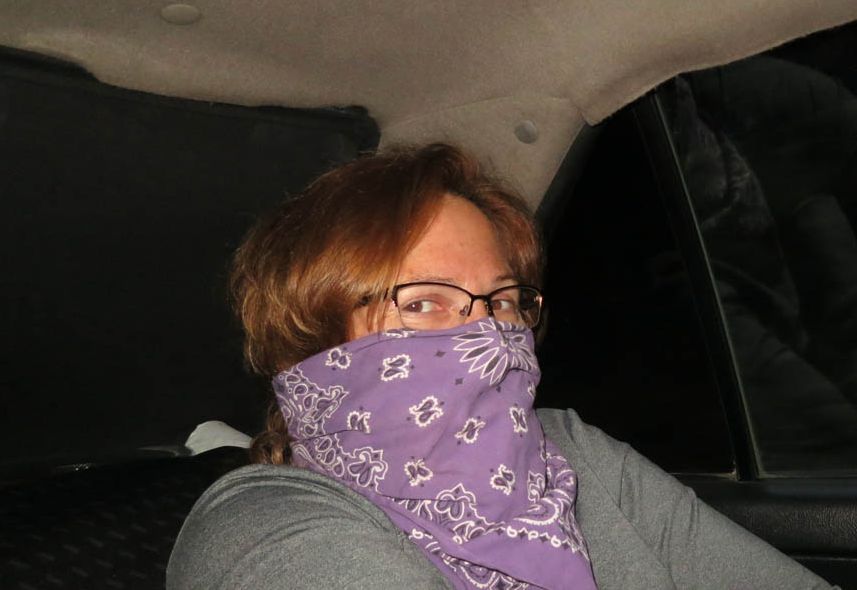 (Some photos in this post courtesy of Don Anthony)