One of my favorite things about visiting Mexico over the holiday season, in addition to the glorious weather and gorgeous scenery, is the authenticity with which the Mexican people approach the holiday season.

Decorations tend toward nativity scenes, piñatas, and poinsettias, and less toward tinsel and tacky Griswald-esque lawn ornaments. Days leading up to the holiday are filled with visits to traditional markets as opposed to trampling each other for DVD players and big screen TVs on Black Friday as if they were life support equipment.

I am not a religious person by any stretch, but I really respect that the Mexican traditions have tried to keep close to the original story of the Holy Family as found in the Bible (which does not even mention the word “Christmas,” by the way.) 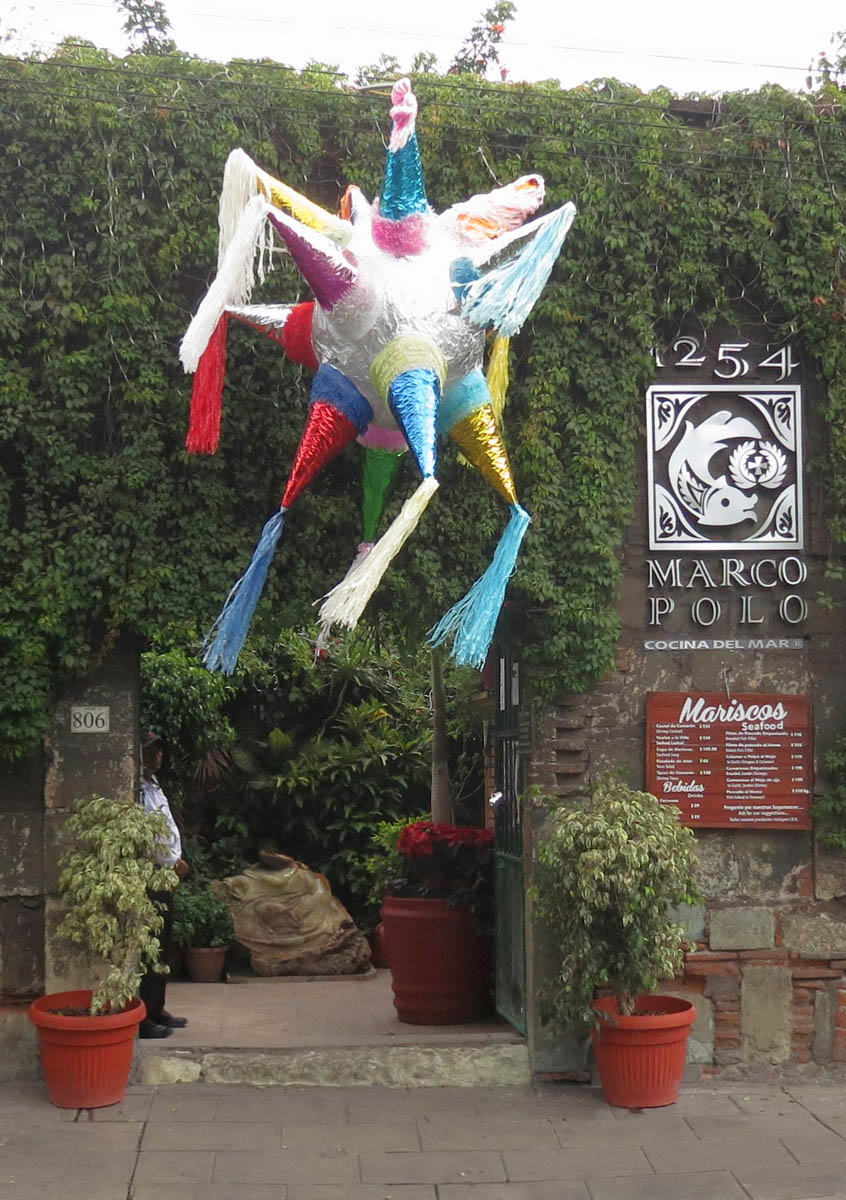 Piñatas filled with candy are part of the Christmas Eve tradition.

Celebrations stretch from 12th December to 6th January, each with some special significance as related to the Christ story. The commemoration begins nine days out with “Posada processions,” reenacting the quest to find “room at the Inn” on the way to Bethlehem. For nine nights, community celebratory processions with children dressed as Mary and Joseph, go from house to house being denied room at the Inn, until they end up at the house hosting the party. The Christmas season runs straight through to the 6th of January, ‘El Dia de los Reyes’ (the day of The Three Kings). 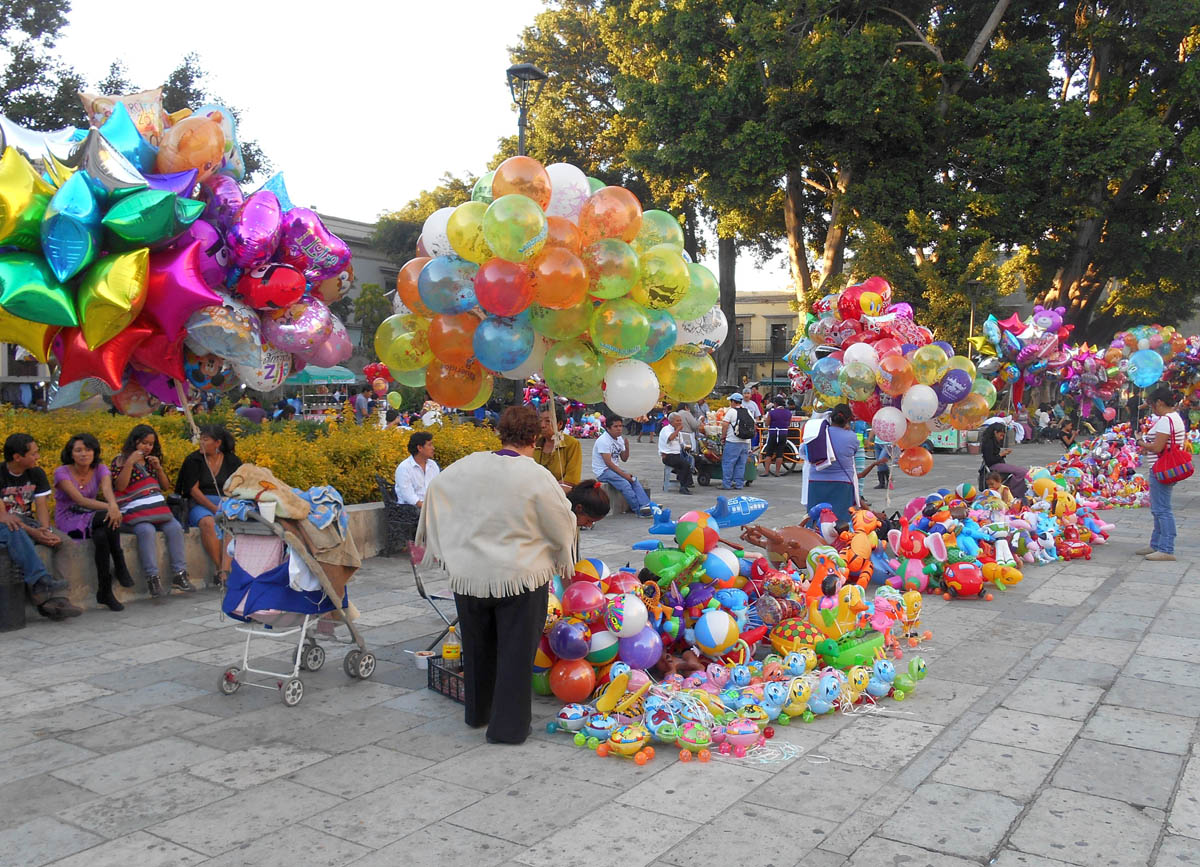 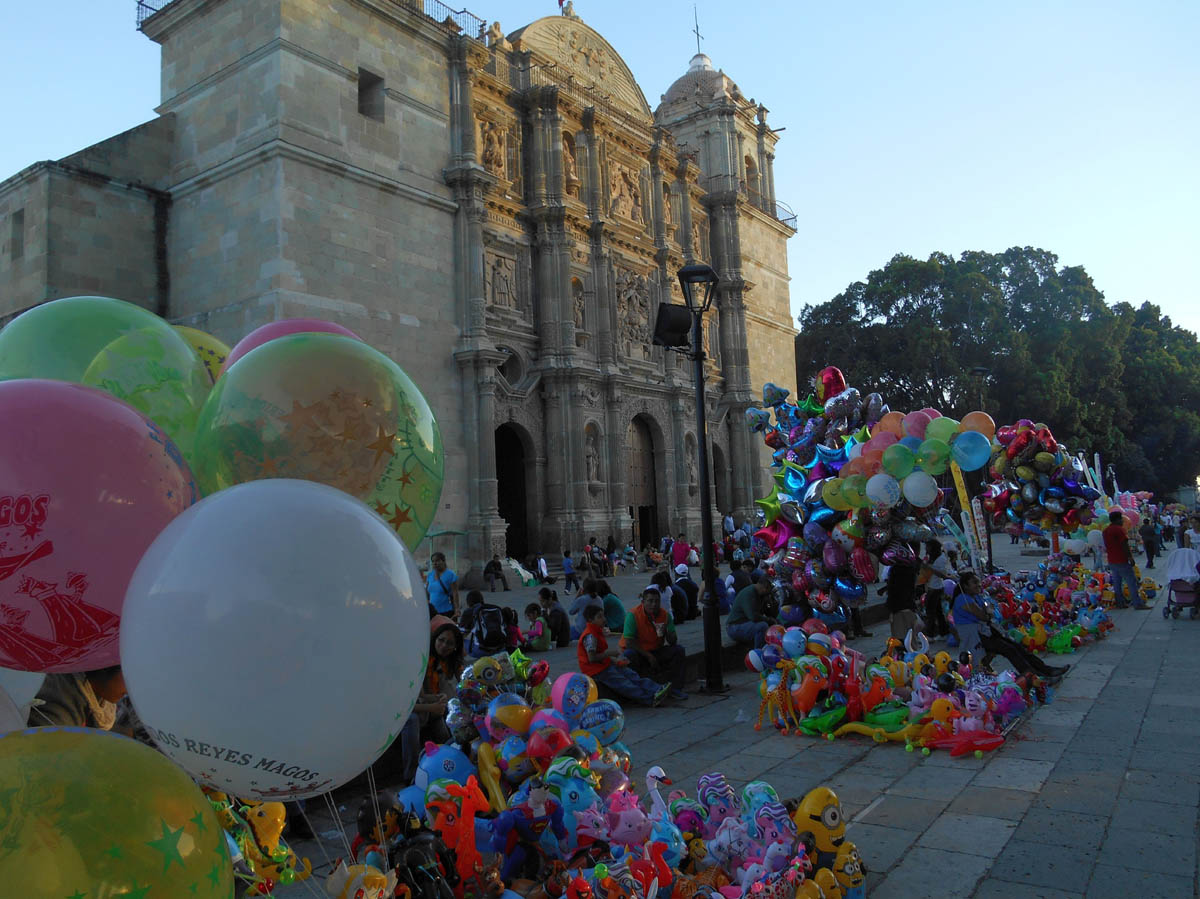 Helium balloons are an important part of the celebration, as children tie their wishes to them prior to releasing.

Christmas Eve and Christmas day are completely focused on family gatherings. There is no weather watch on the ten o’clock news, looking for a fat white man in a red suit being pulled around the sky by eight tiny flying reindeer. Presents are brought to the children by the Magi, Reyes de Mago, in keeping with the legend of the Three Kings who brought gold, incense (perfume) and myrrh (anointing oil) to the Christ Child. 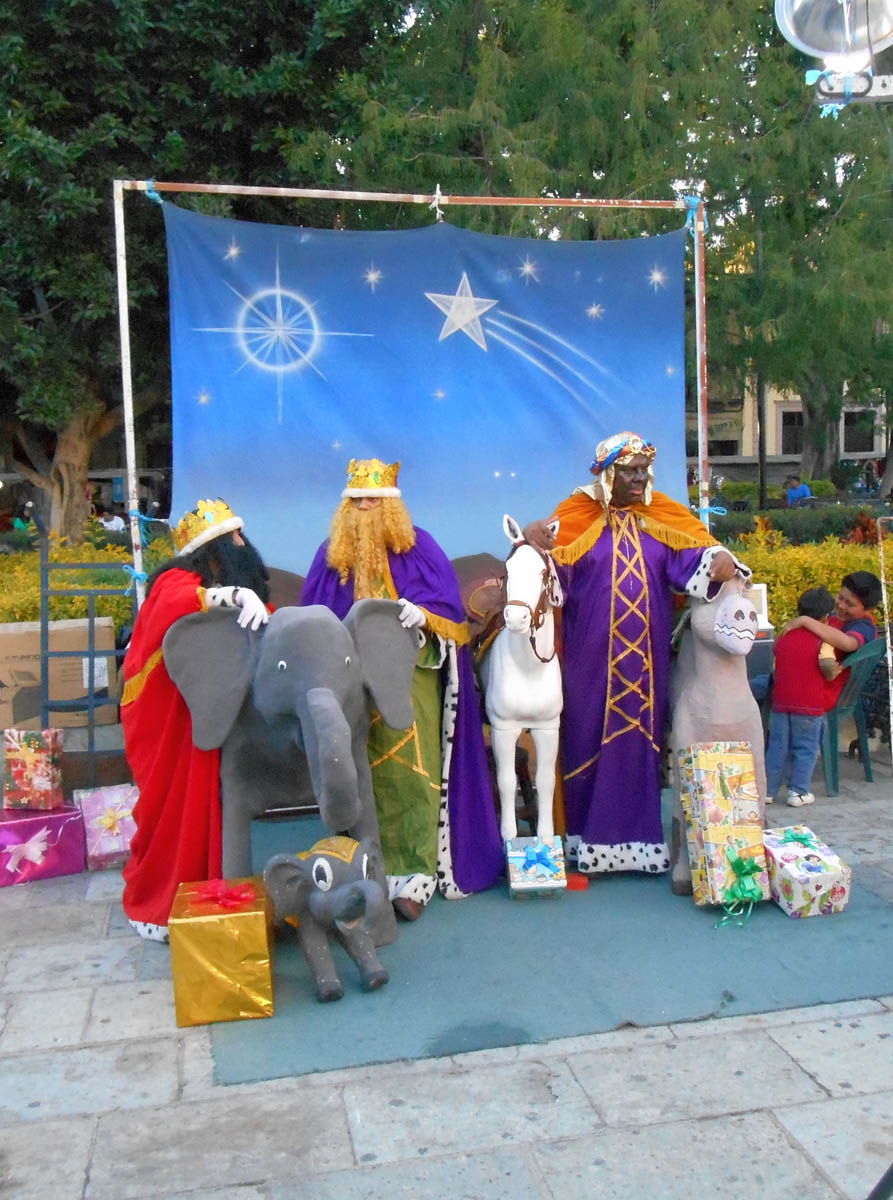 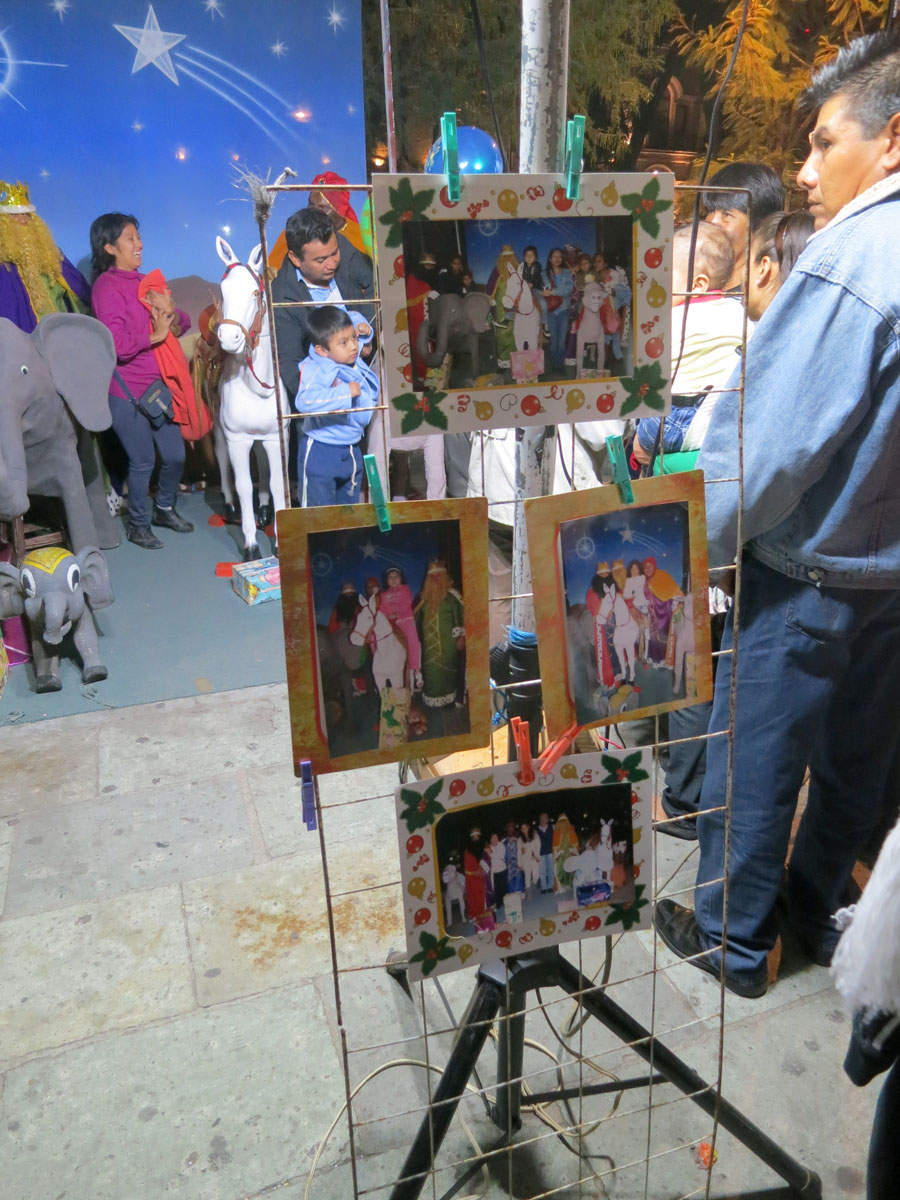 In days leading up to El Dia de los Reyes, I began to notice “Three Kings” popping up on every corner of the Zocalo. I was starting to notice a pattern in what I had once viewed as a homogeneous group of three men wearing crowns. But consistently, they had gone to all the trouble to show one of the Wise Men, Balthazar, in “black face.” 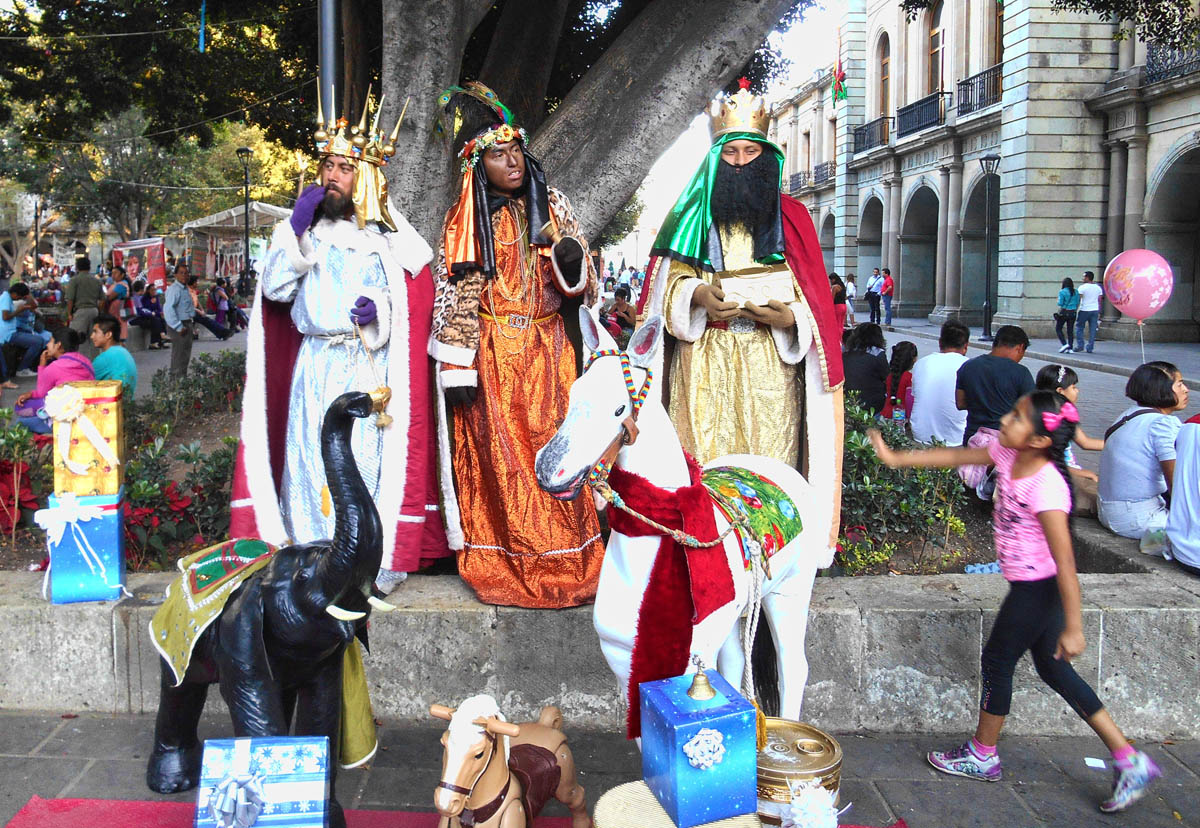 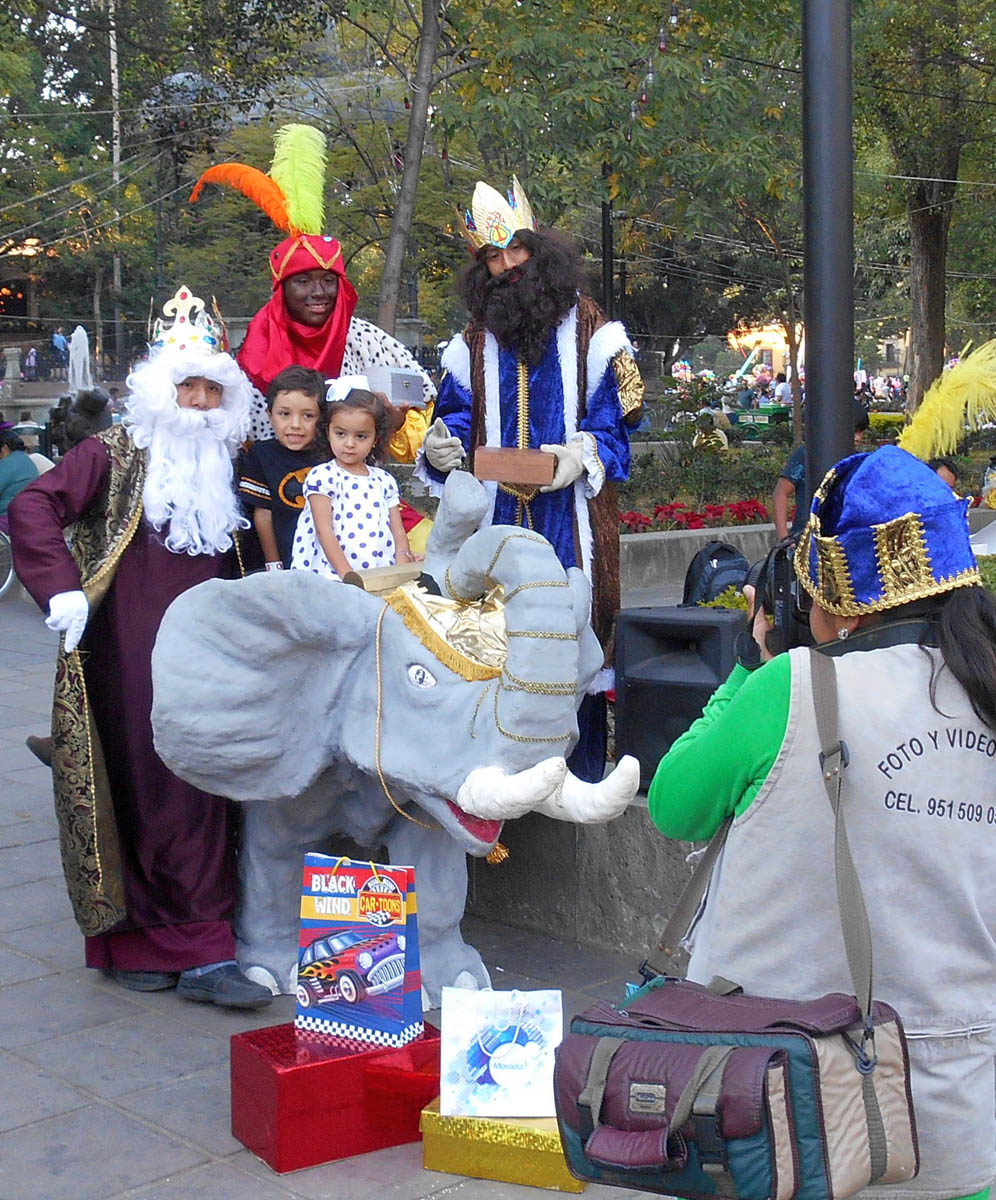 This led me to do a little research on the legend, to learn they weren’t all “from Orient Are.” Caspar is the older of the three, typically with a white beard. He is the one bearing the gold from Asia. Melchior brought frankincense from his native Arabia. And Balthazar, the youngest and often depicted in black-face, hailed from Africa. On the eve of January 5, the three figurines of the Three Wise Men are added to the nativity scene, and gifts are left overnight for the children. 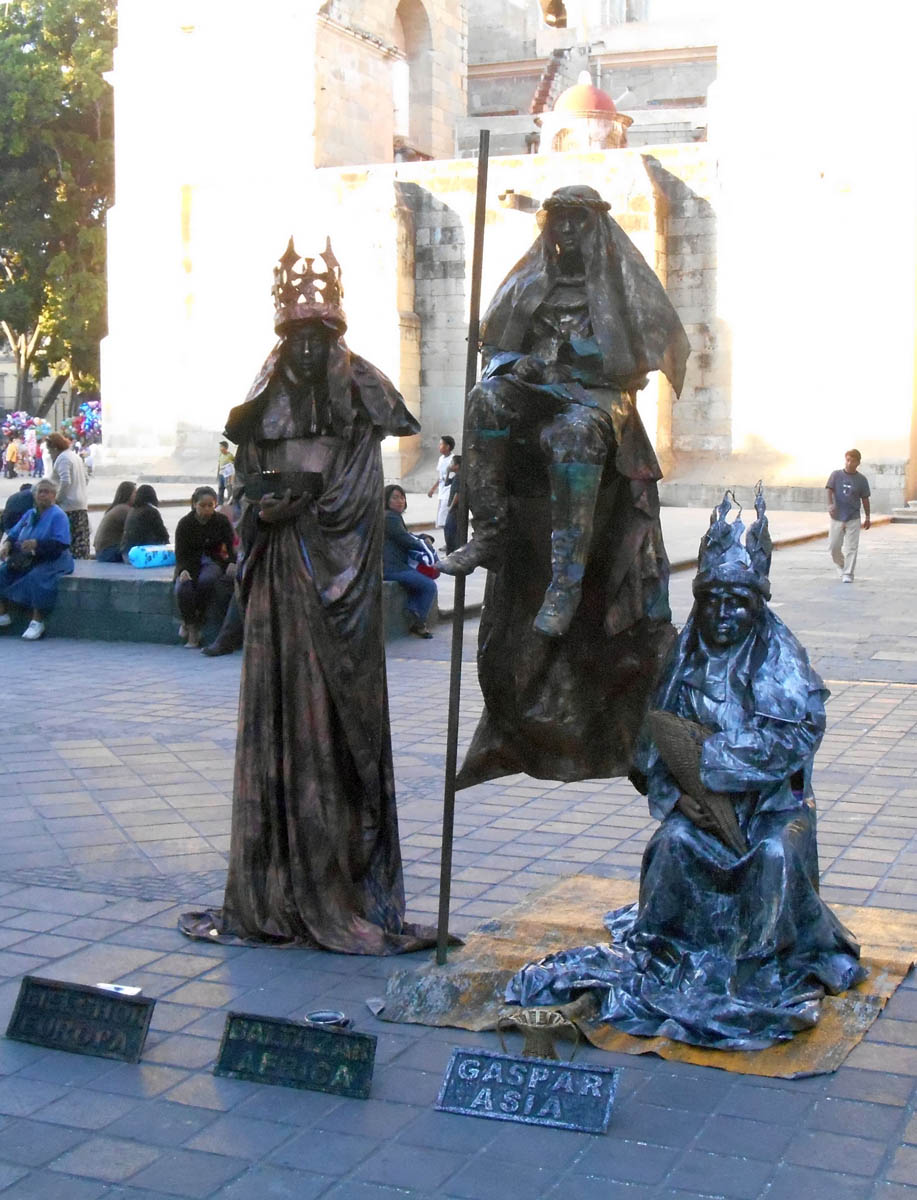 Unlike street performers in the US that will move or change positions if you tip them, these guys give out incense or a lollipop.

The following day, Rosca de Reyes, an oval cake resembling a crown, decorated with candied fruit is shared by the family. Inside the cake, a plastic or ceramic baby is baked, again to symbolize the necessity to hide the Baby Jesus from King Herod. The person who finds the baby is responsible for hosting a party on 2nd February for the Fiesta de la Candelaria. 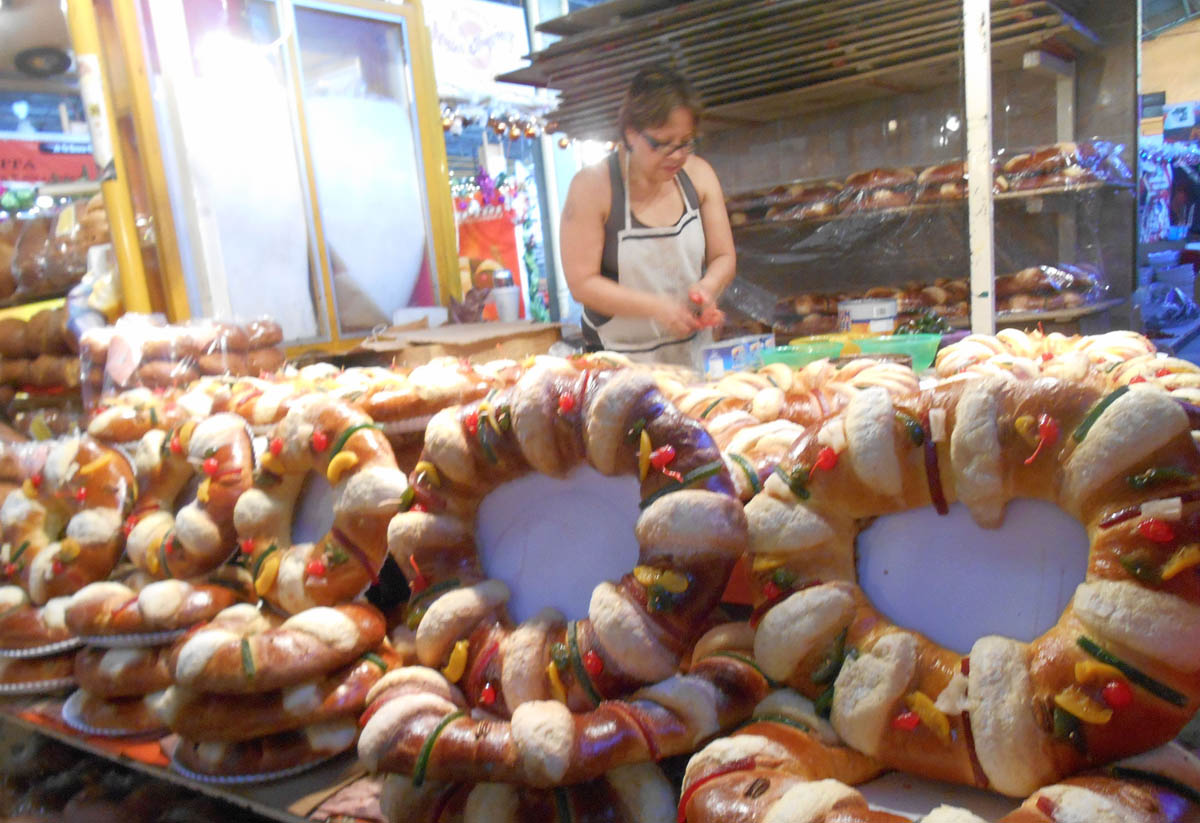 Rosca de Reyes, or King’s Cakes for sale in the market.

There was a parade scheduled for the Eve of El Dia de los Reyes, the 5th January. Don attended the parade and took these incredible photos: 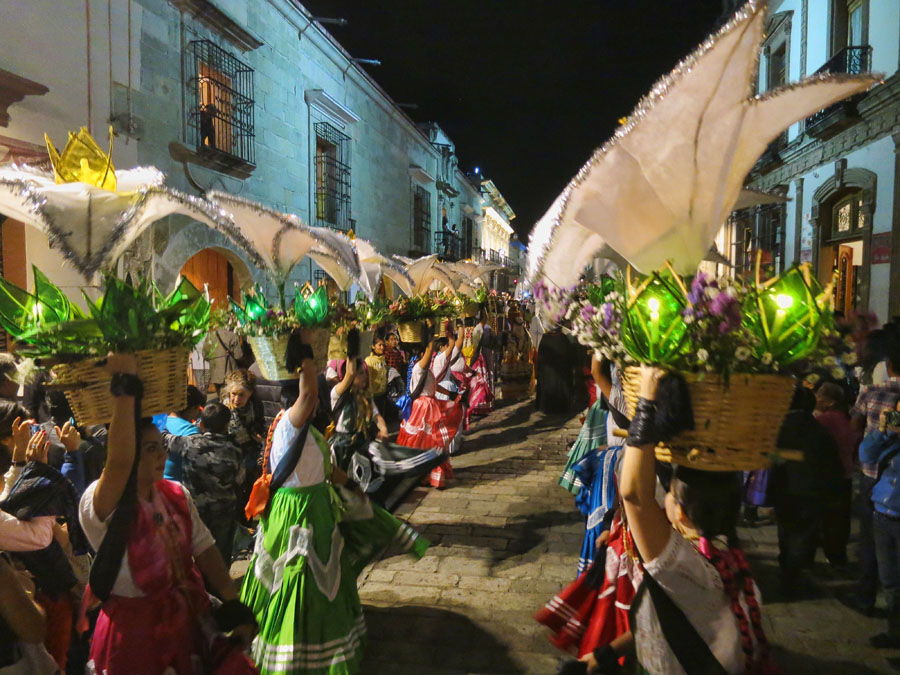 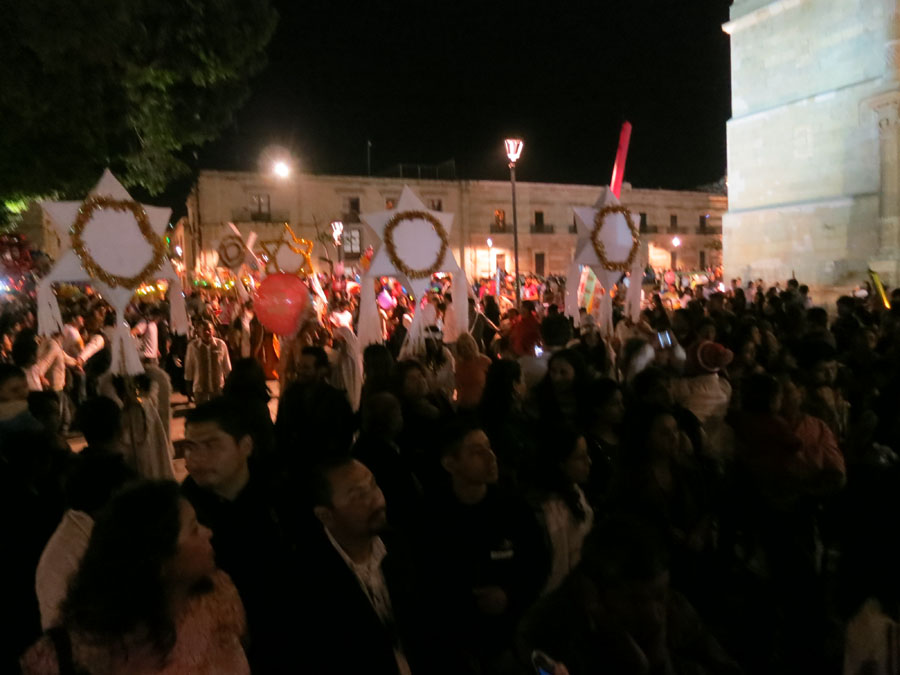 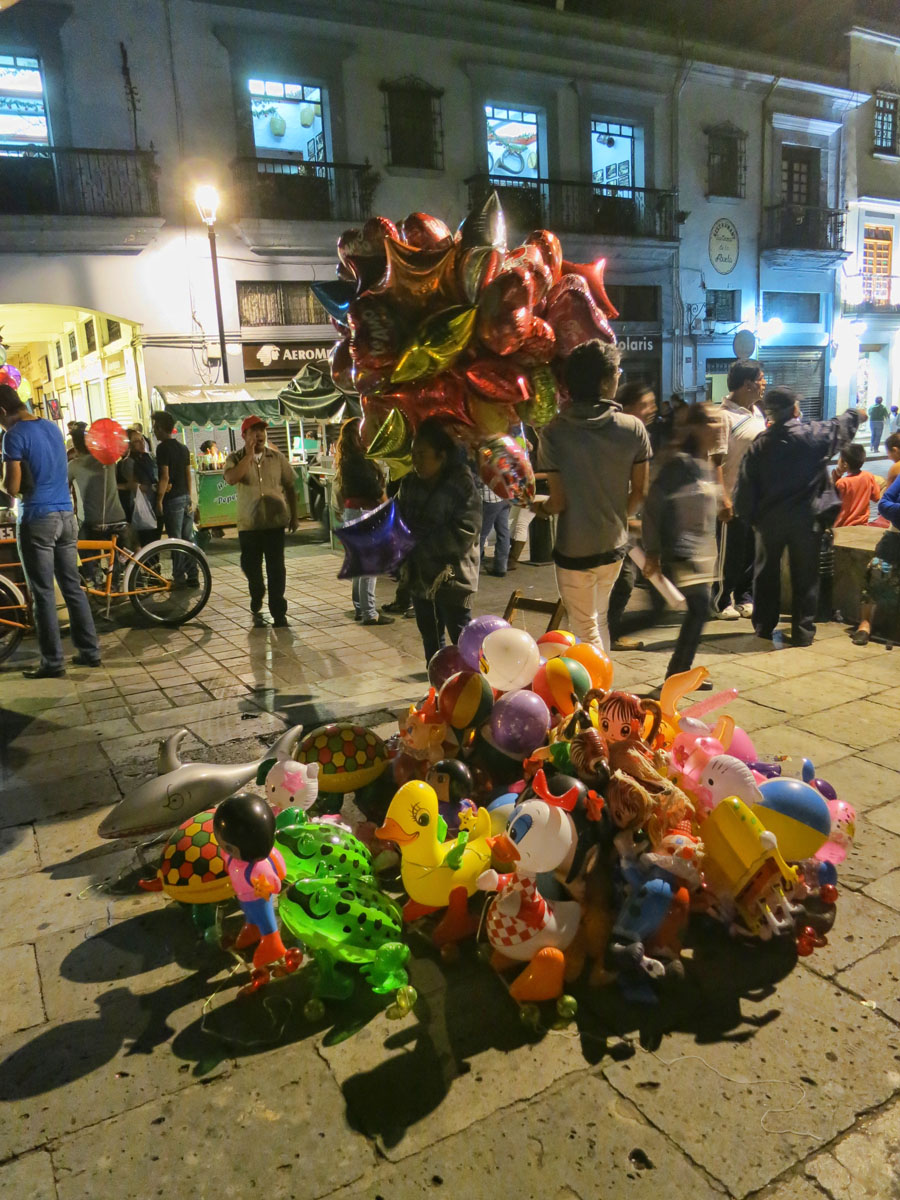 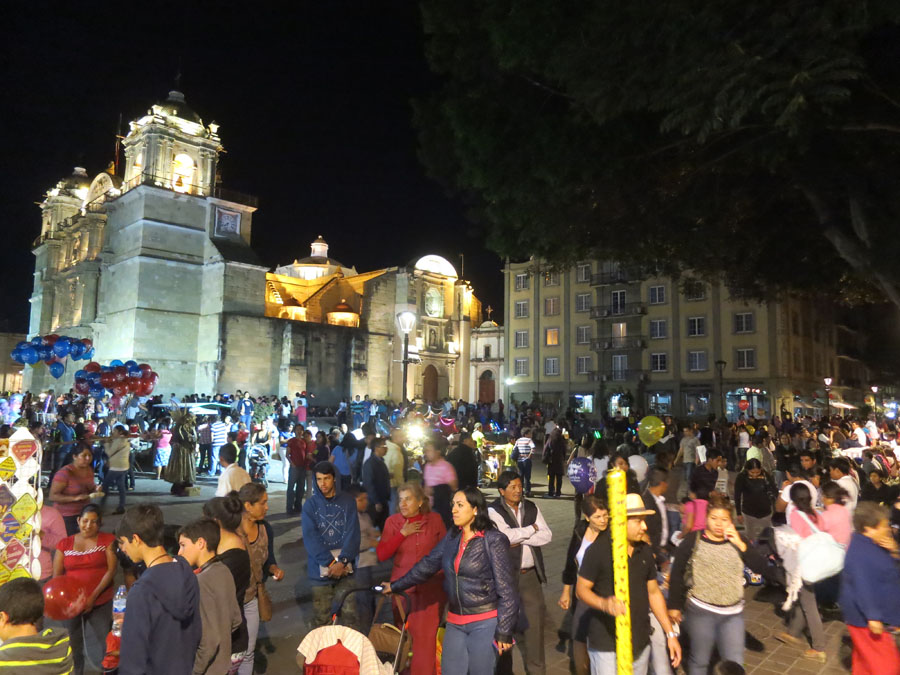 Unfortunately, I did not get to stay for the parade, as I had to leave Mexico, reluctantly…eventually. For it was time to return to work. But on a happier note, it is also time for me to return to the Winnie, where I will hopefully soon be once again following my own yonder star…