Since I had to come into town to finish up my taxes, I figured I may as well explore the other side of Tucson.   Two different Park Rangers at Saguaro National Park (West,) as well as my friend Lynne suggested I split my time in Tucson between Gilbert Ray and Catalina State Park to the north, since both areas were so vastly different in scenery, ambiance, and accessibility to “infrastructure.”   So I hitched up the Winnie and reluctantly pulled out of Gilbert Ray, saying goodbye to my statuesque, silent saguaro friends, vowing, “I’LL BE BAAACK!!!” 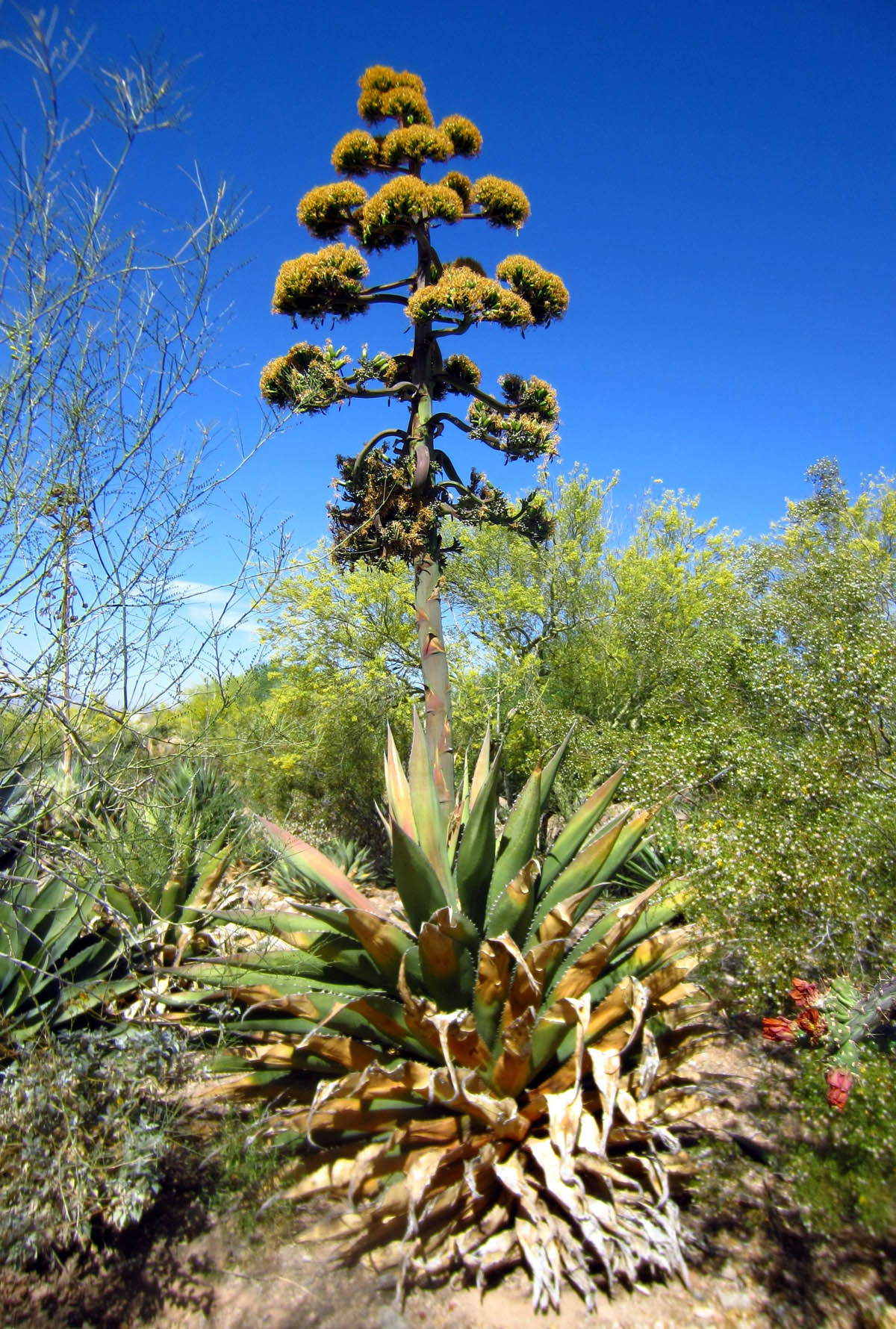 I had not yet had a chance to visit the Arizona-Sonora Desert Museum, which everyone said was a “DON’T MISS!”    So I took a day off from work to tour the museum, do my repositioning and re-provisioning between the two campsites, and hopefully still have enough daylight left for a hike (a pipe dream after three hours walking the museum, and setting up a new camp in the afternoon heat!)

The Arizona-Sonora Desert Museum opens at 7:30am, which is in my opinion the perfect time to arrive….just before the school buses full of screaming kids, followed by the tour buses full of yammering Asian tourists mowing their way through on a “speed tour” like a group of hungry locusts. 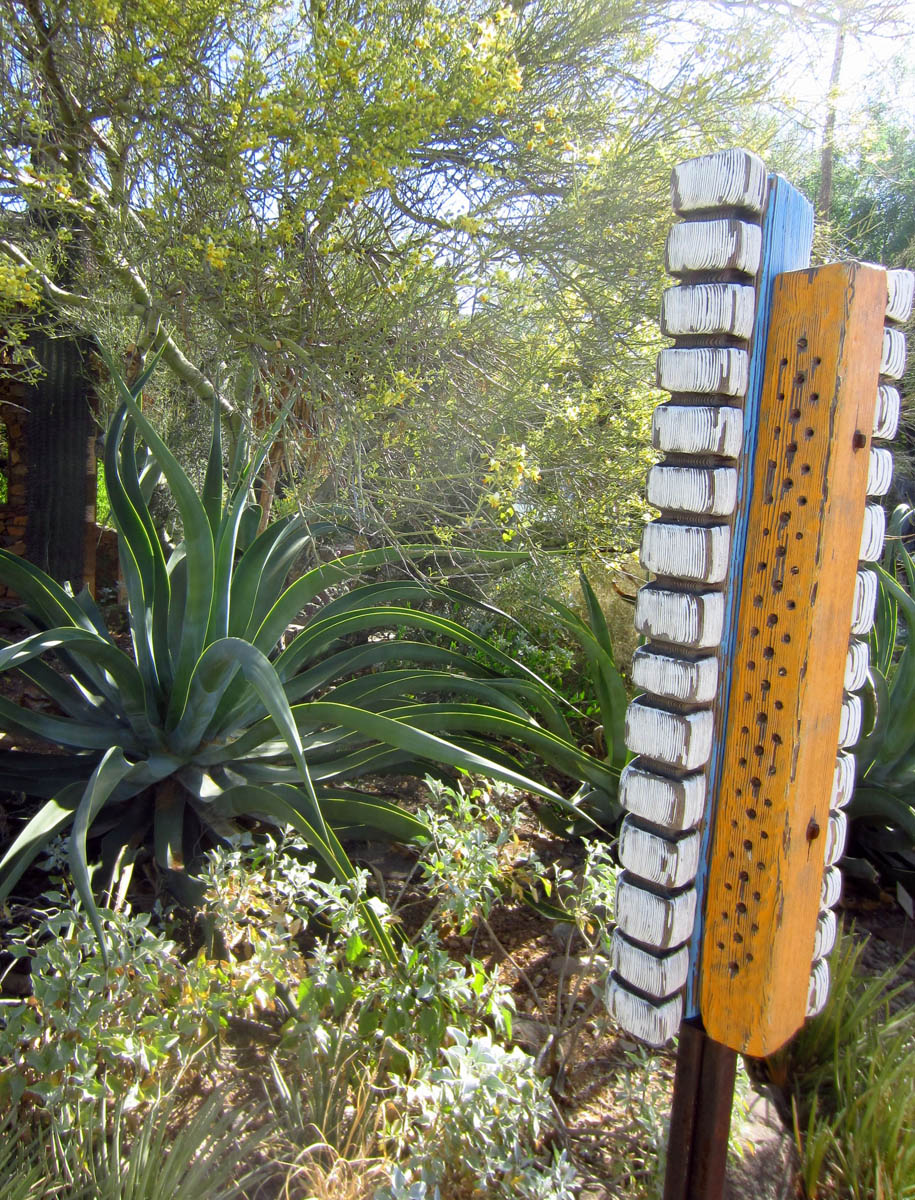 By reversing direction from the arrows indicating the “Main Route,”  I was able to have the hummingbird enclosure all to myself for about 15 minutes.  I could have sat in there all day, watching these busy, aggressive little birds, some no heavier than the weight of a penny, defending their territory, tending their nests, and dive bombing my baseball cap.  It was my favorite part of the museum, by far.  (I don’t have the kind of camera required for capturing these adorable, fleeting creatures, but that didn’t stop me from trying!) 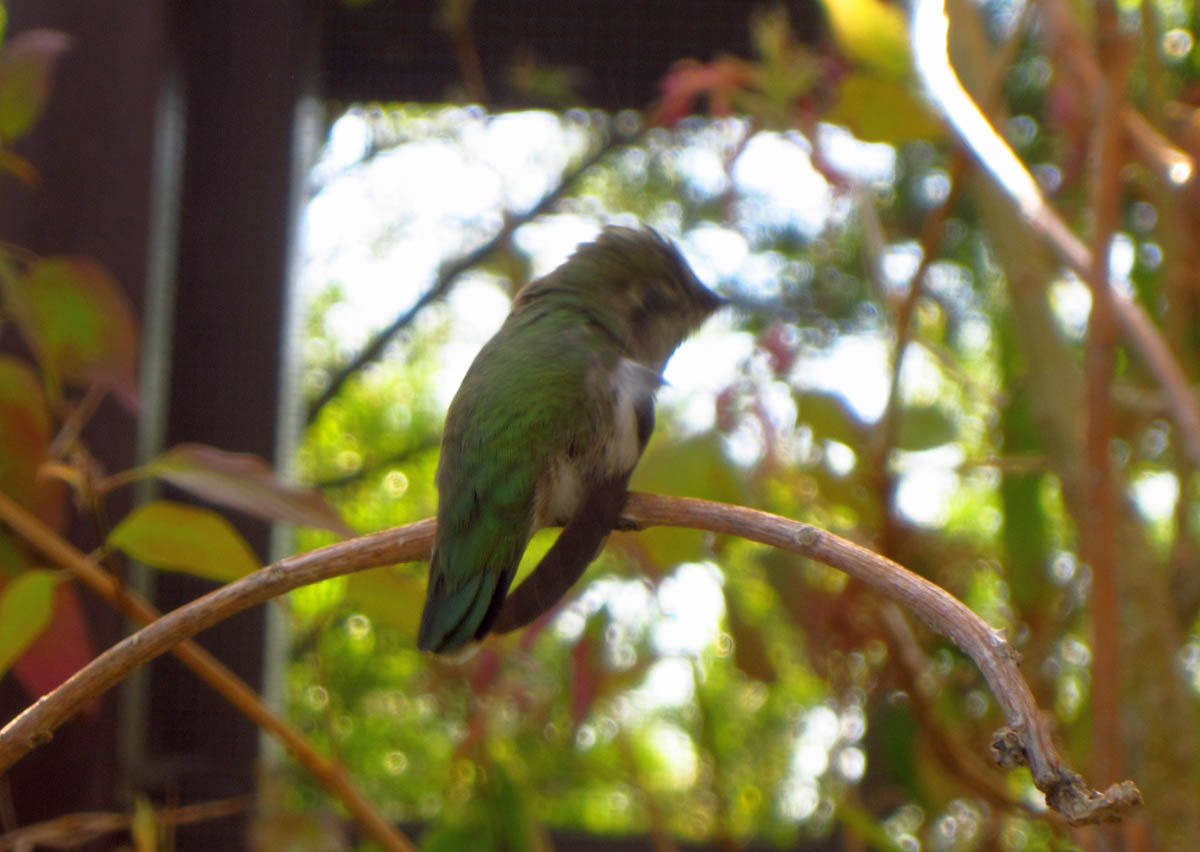 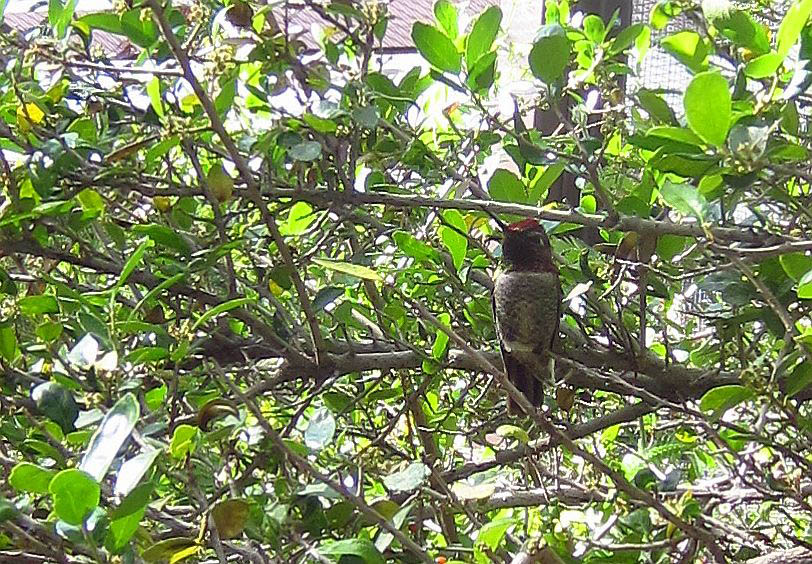 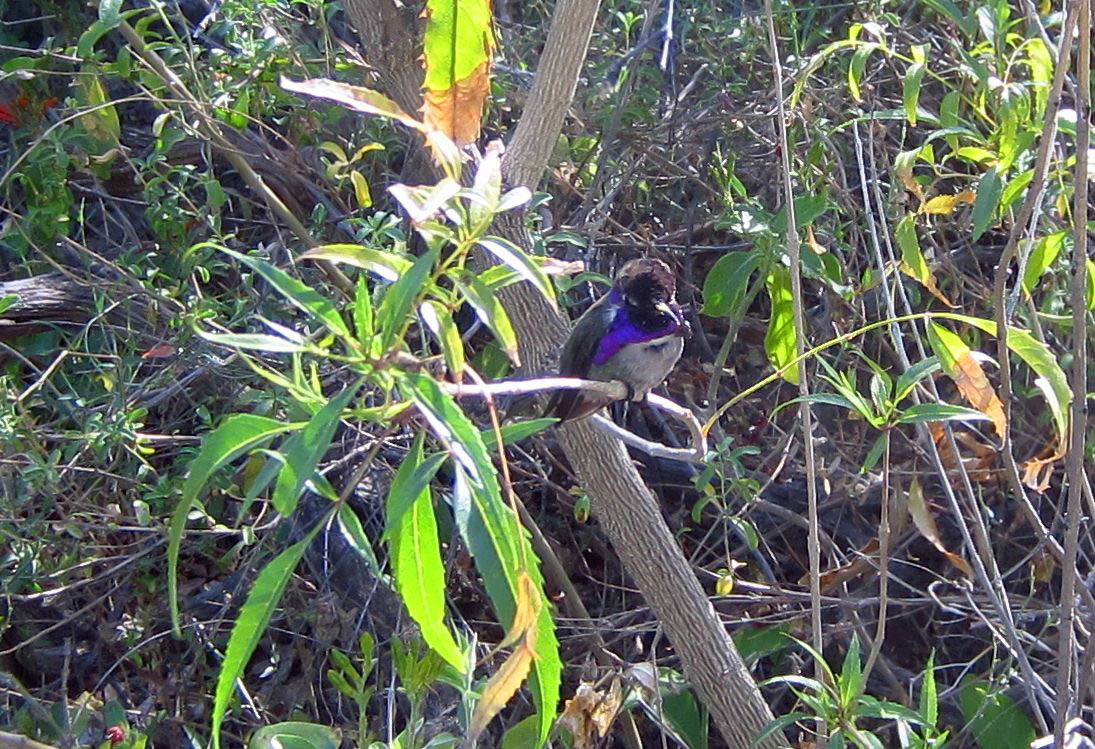 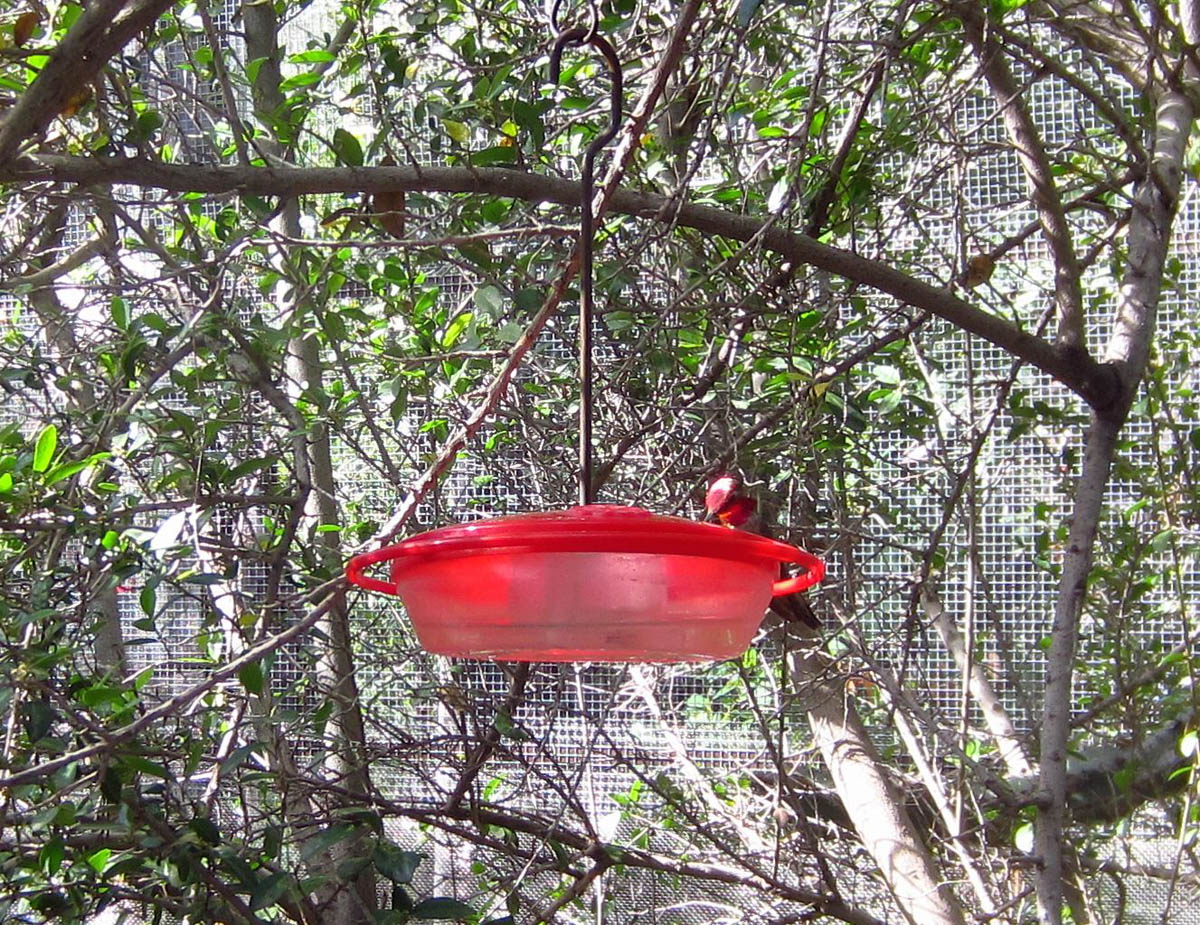 This one had an iridescent fuchsia head, which unfortunately didn’t show up so well with my P&S camera. 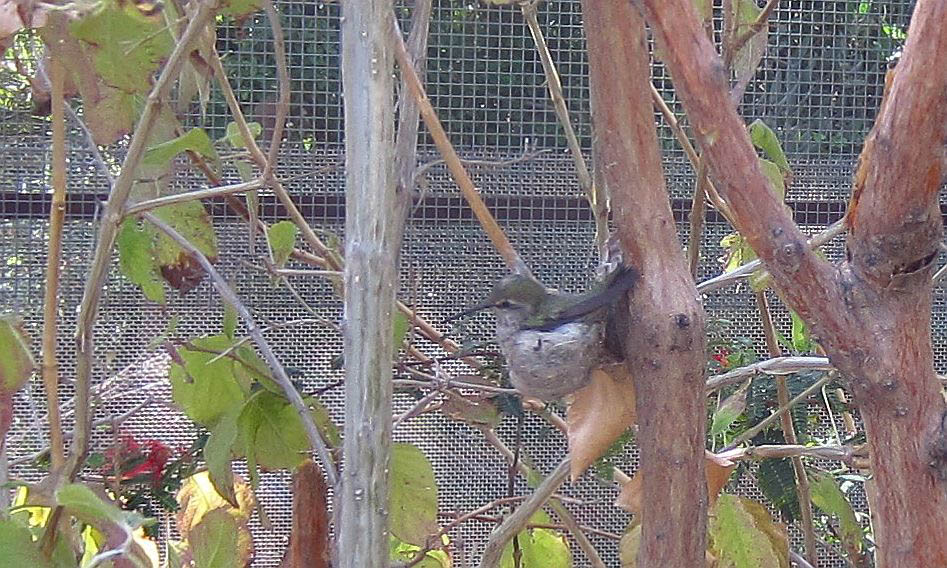 I had never seen a hummingbird nest before…so tiny!

The brochure describes this place as “a fusion experience: zoo, botanical garden, art gallery, natural history museum, and aquarium.”   I am not typically one for visiting zoos.  Too many years spent in my own “entrapment,” from marriage to mortgage to management.  So I usually try to avoid them due to empathy.   But I do have to say, this one was nicely done.   Of all the enclosed occupants, this one was the only one who seemed to be looking for a way out…literally “jumping out of his skin!” 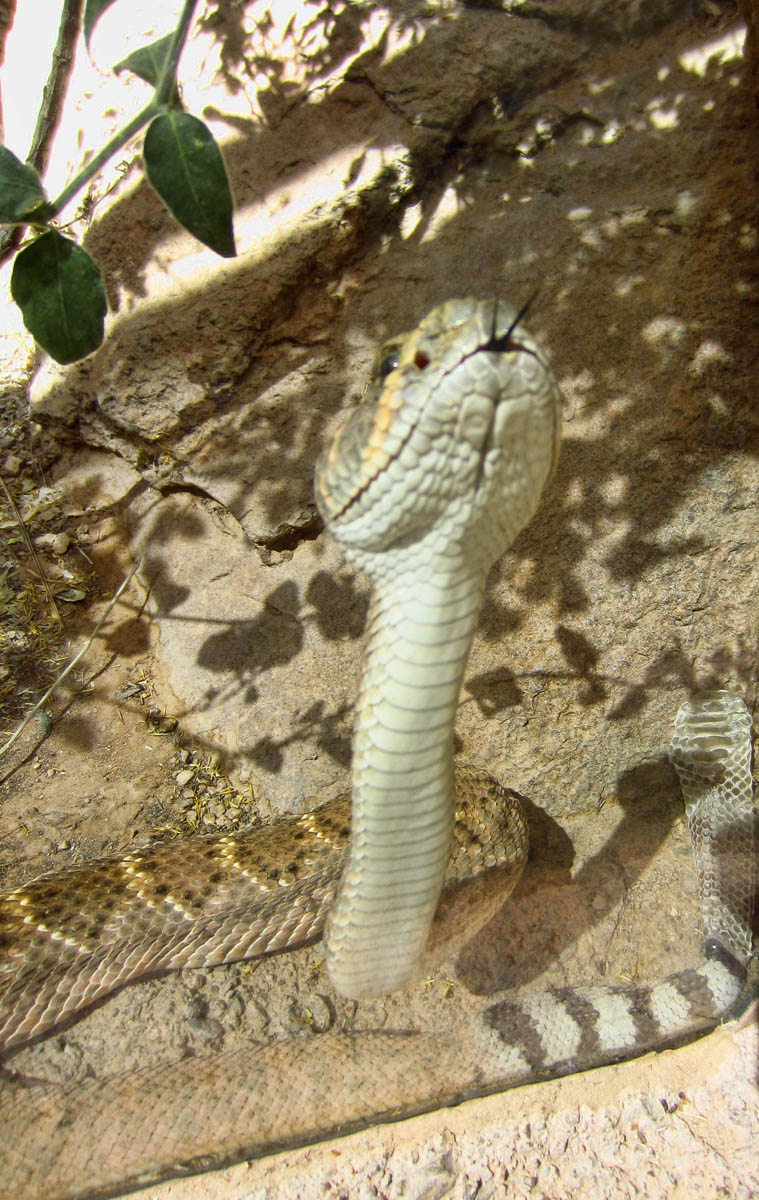 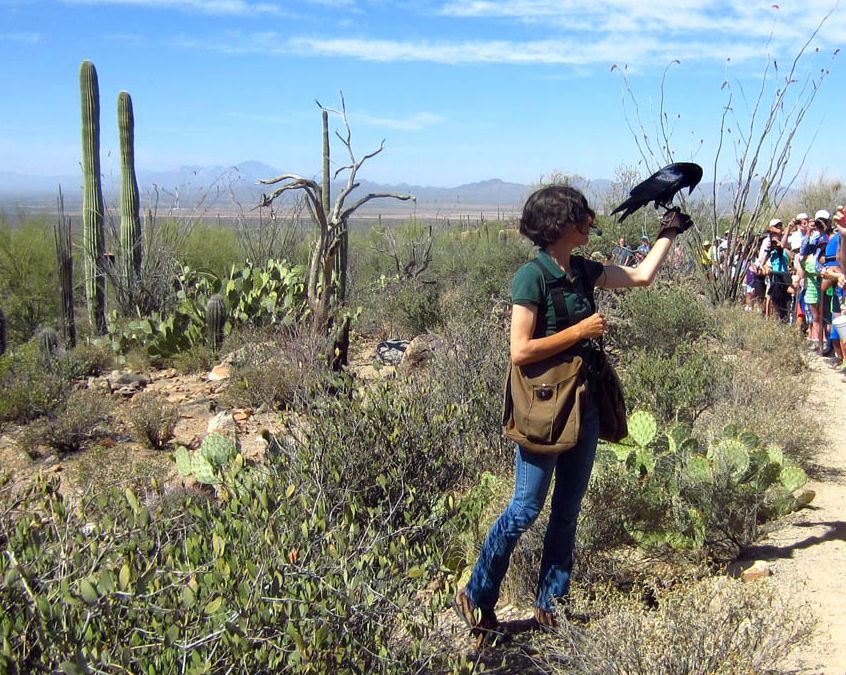 The Raptor Demo — unfortunately, it was an extremely gusty day, so we only got to see three; the raven, a horned owl, and a falcon. 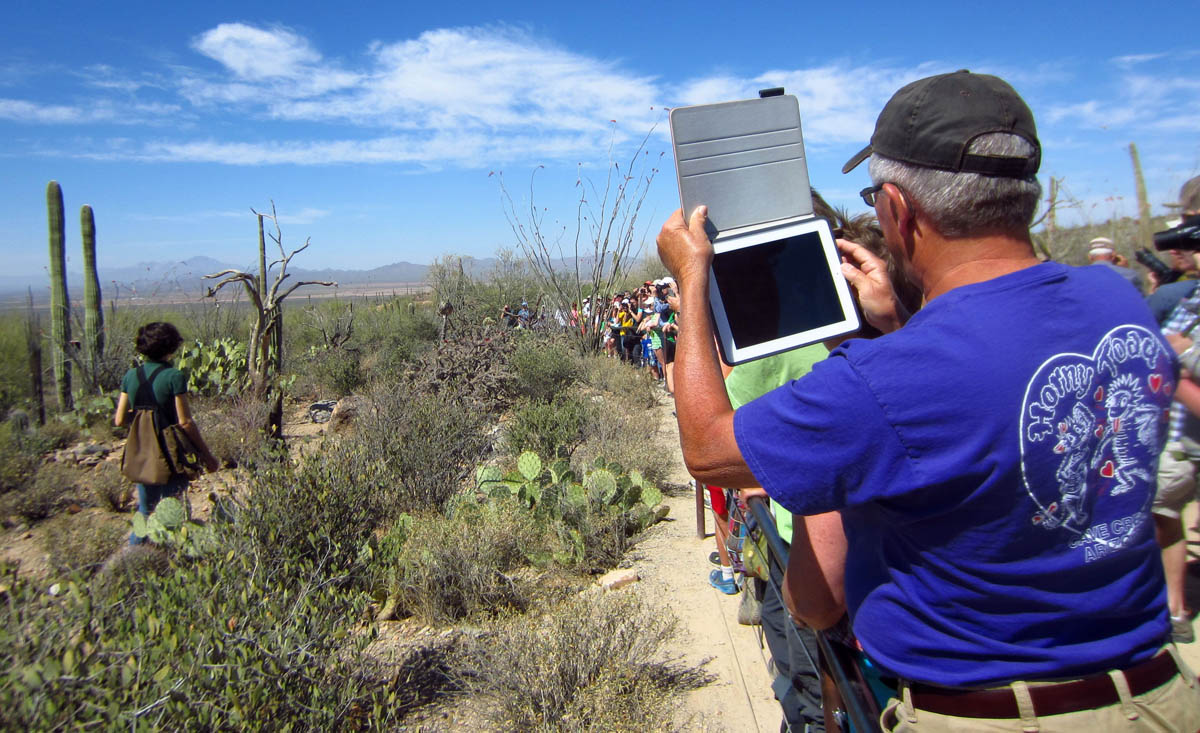 Although I spent three hours in the museum, I got very few photos.   I saw glimpses of bear’s paws, coyote’s ears, beaver’s butts, a mountain lion’s tail, but none of the subjects were interested in coming out to pose.  Still, it was an intriguing, entertaining visit in an authentic setting, worthy of the time spent.

Moving to the other side of Tucson afforded lots of opportunities for resupply up and down North Oracle Road, which runs within walking distance of Catalina State Park.  Even though a Walmart, In and Out Burger, and Dick’s Sporting Goods are just across the highway, you would never know it.  It is a beautiful state park, I must admit.  Closer to the mountains, with a spectacular view from my “front yard.”   It is a bit more lush and green, also.  Unfortunately, much of that “green” comes in the form of mesquite trees, which serve as a constant reminder of so many of the State Parks in Texas. The fact that 90+ degree summer is nipping at my heels didn’t help, as the week had turned much hotter. 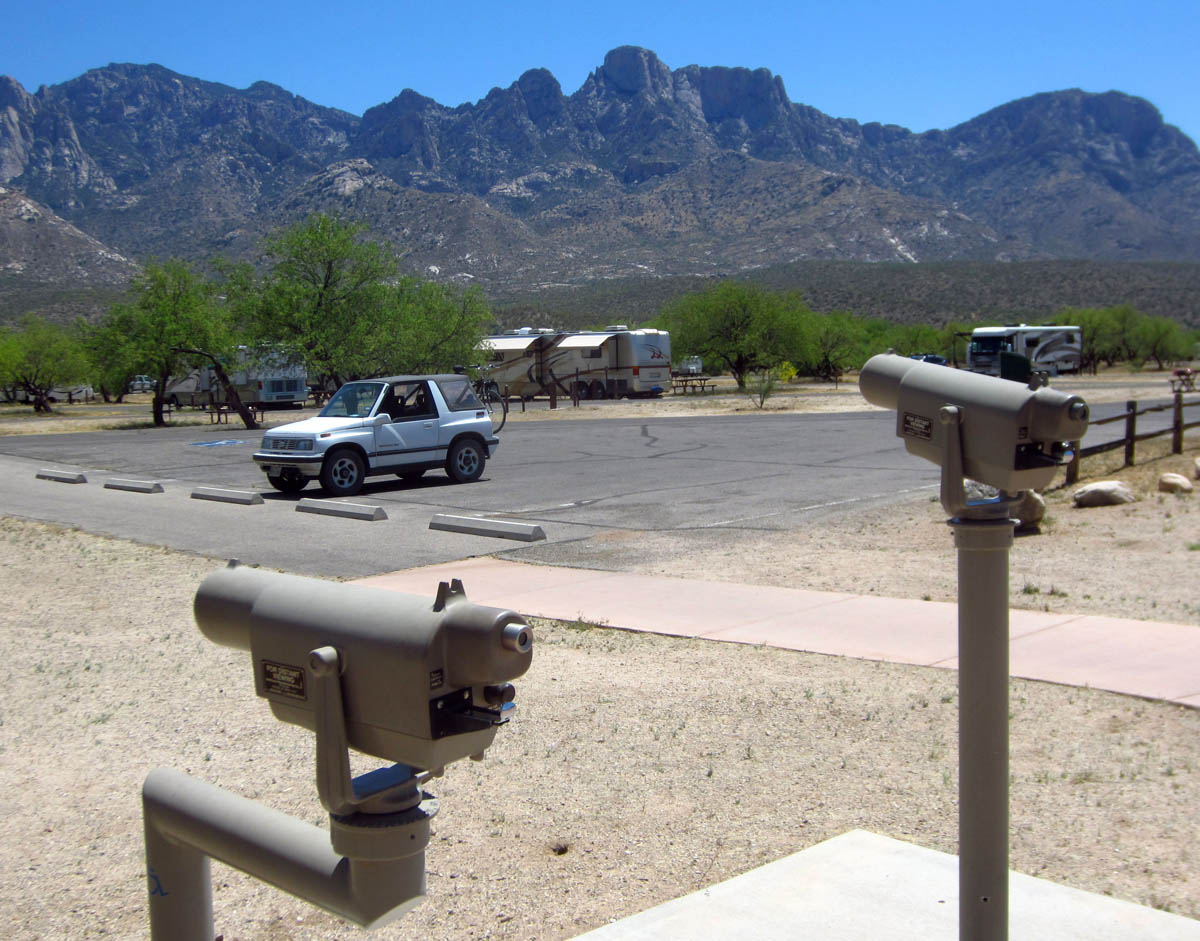 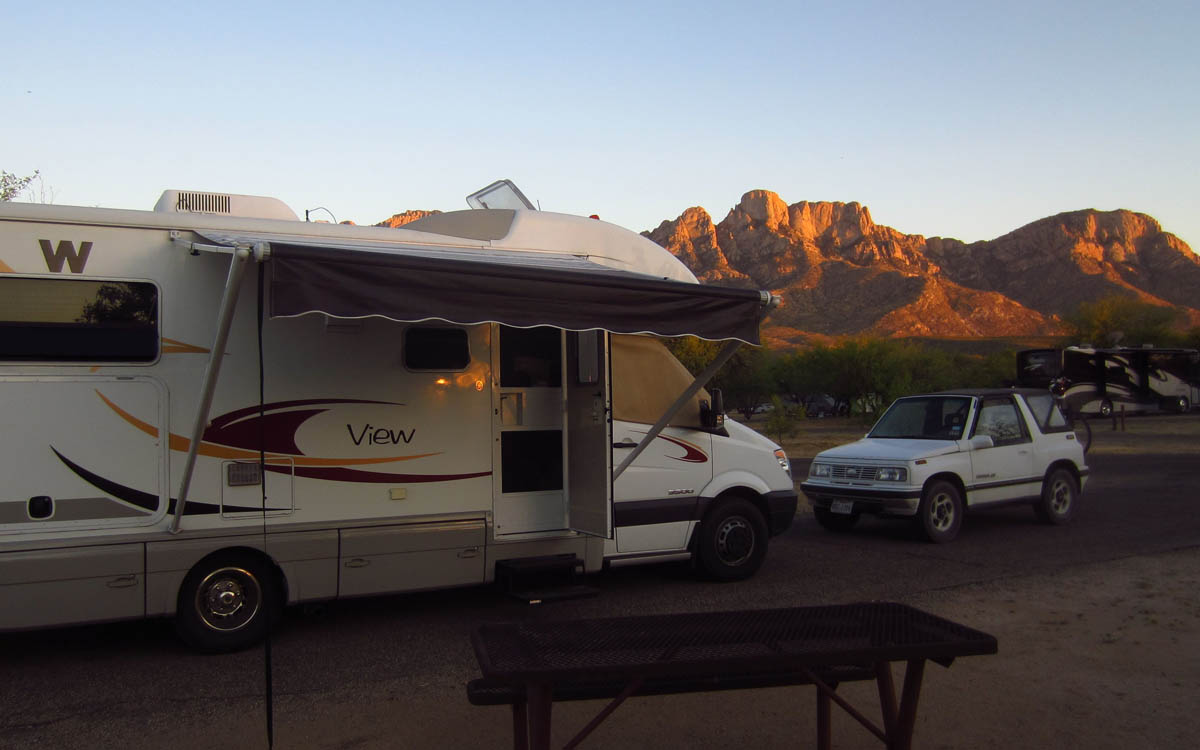 I’ll have to hand it to Catalina, though.  They did offer one nice place to seek refuge…in the biggest, fanciest, cleanest bathrooms of any campground I have yet to experience!    I don’t typically photograph restrooms, but these were exceptional.  The tile was so clean, I could have used it for a mirror!   Every shower stall had a hand-held shower-head.  Steaming hot water.  Good water pressure.   And a lending library right outside in case you decide to sit and stay for a while.   😉 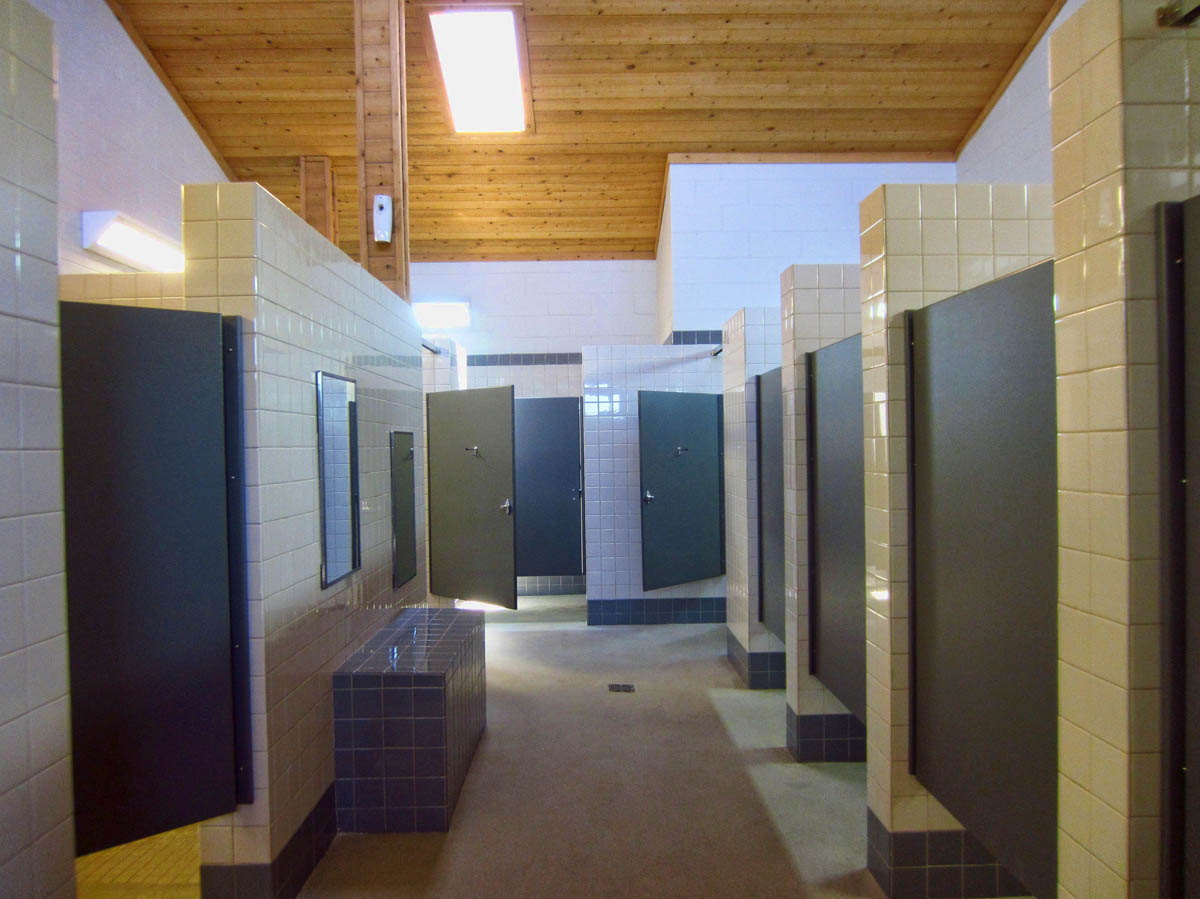 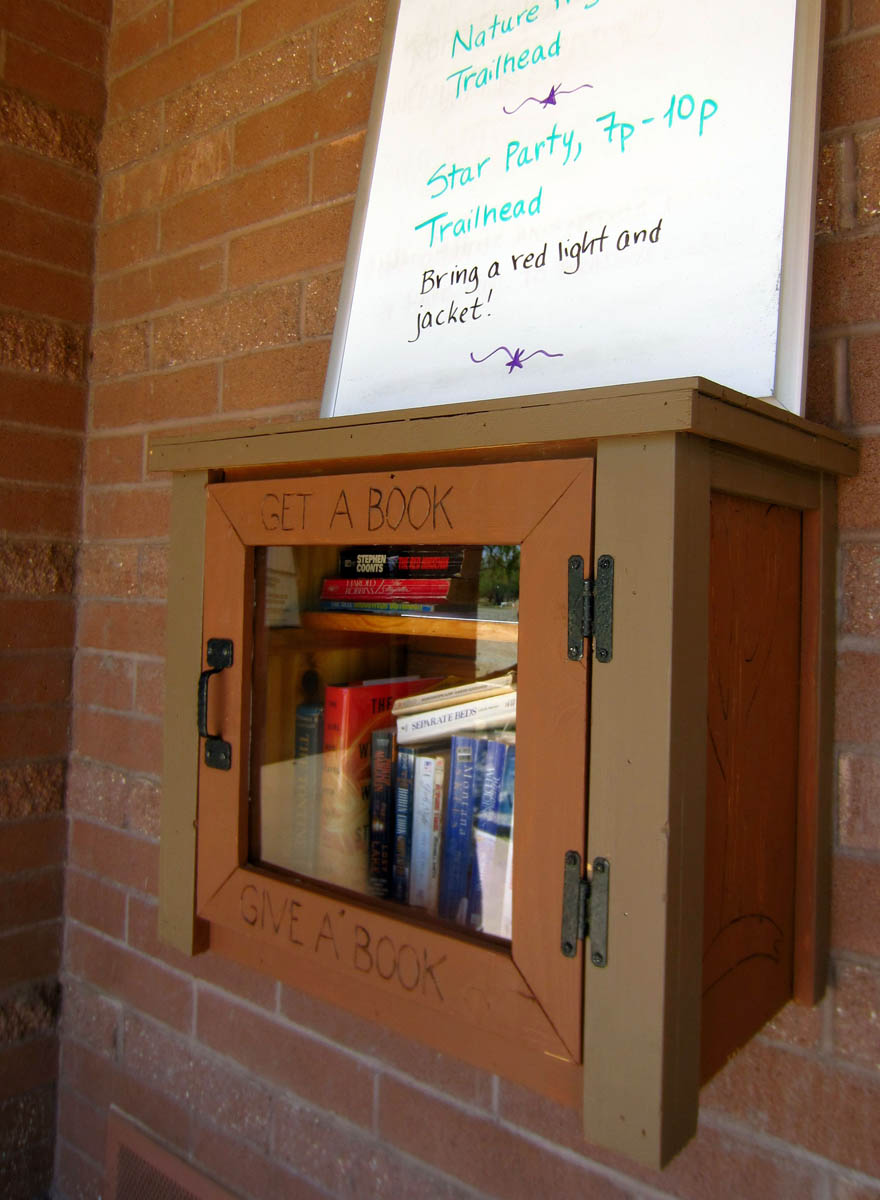 As badly as I was missing the quiet, scenic (albeit shower-less) little Gilbert Ray campground, the showers at Catalina did help take the edge off….never-mind the layer of dirt.  Too bad I couldn’t wear my dusty hiking boots in there too.  😉

5 thoughts on “The Other Side of Tucson”