After driving the nine mile Artist Drive loop, it is probably around 11:00am, and the temperature remarkably still feels comfortable to me.  (“It’s a dry heat,” I know, I know.)  So I figure, I am feeling good, I am going to keep going!

So I stop at Golden Canyon to do the 2.5 mile RT mile hike to Red Cathedral.  On my way in, I meet a couple coming the opposite direction.   I ask them how much further to Red Cathedral.   The man says, “You are halfway, but it is very far.”  The woman adds, “TOO FAR!!”   He says,  “My wife has suffered a little heat stroke. “  But she is standing and talking, so I don’t even THINK to ask if they need help. 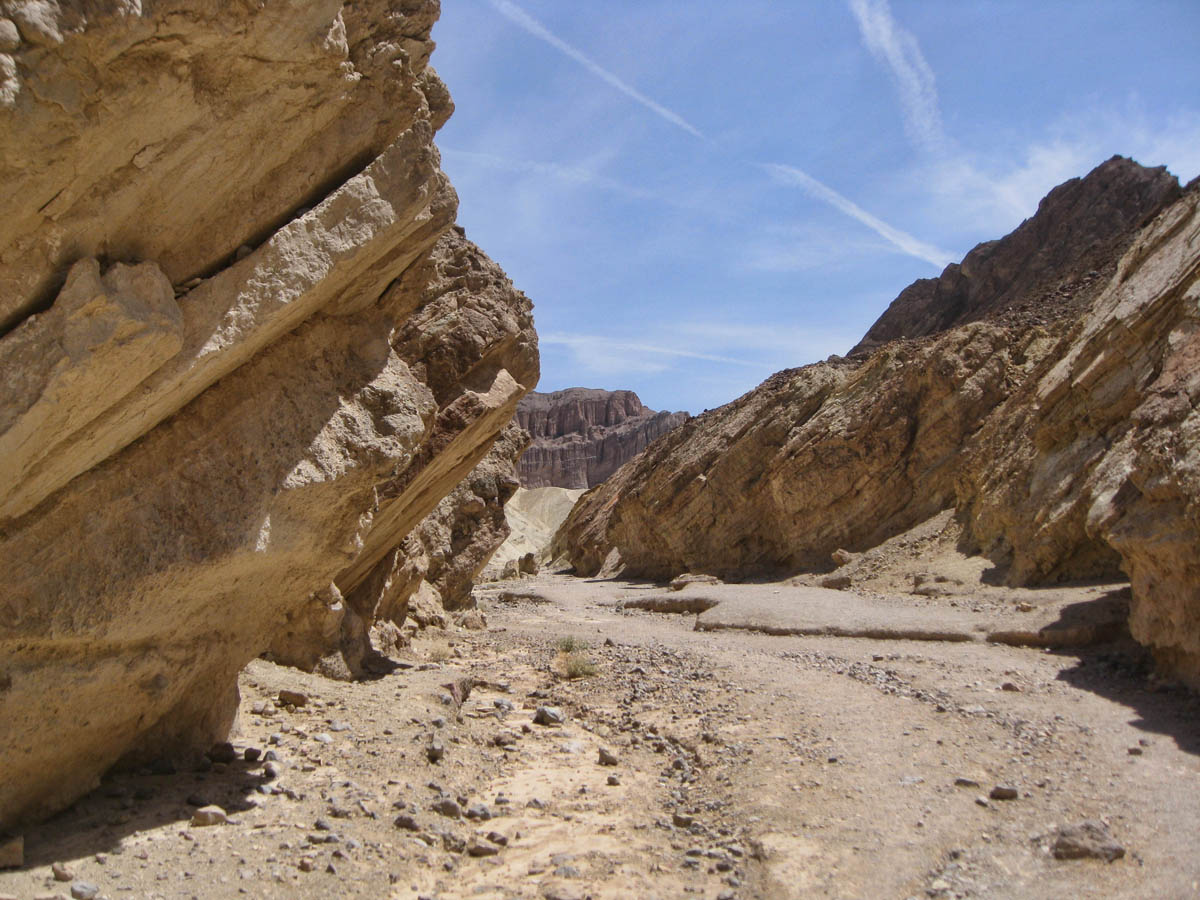 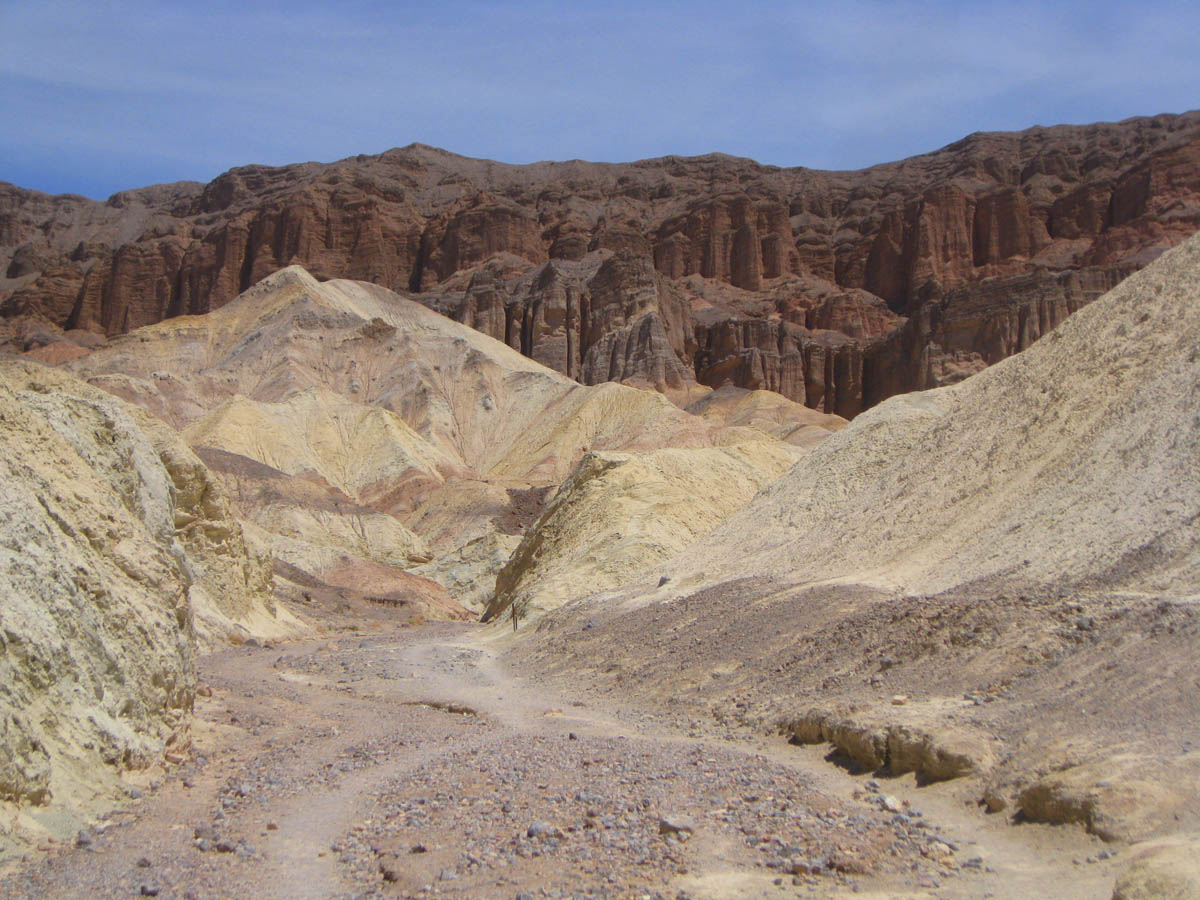 I keep walking up the canyon until I get to the Red Cathedral.   It’s getting hot fast, but I stop under the overhanging rocks in the shade frequently to rest along the way.   I get to the red rocks, and the trail appears to keep going much further than the .25 miles at the last milepost.   I am either on a different trail, or my distance perception is off.  I keep going, but I start to feel woozie and a bit disoriented, as it has now gone from “still comfortable” to “seek shelter” in a matter of a few minutes. 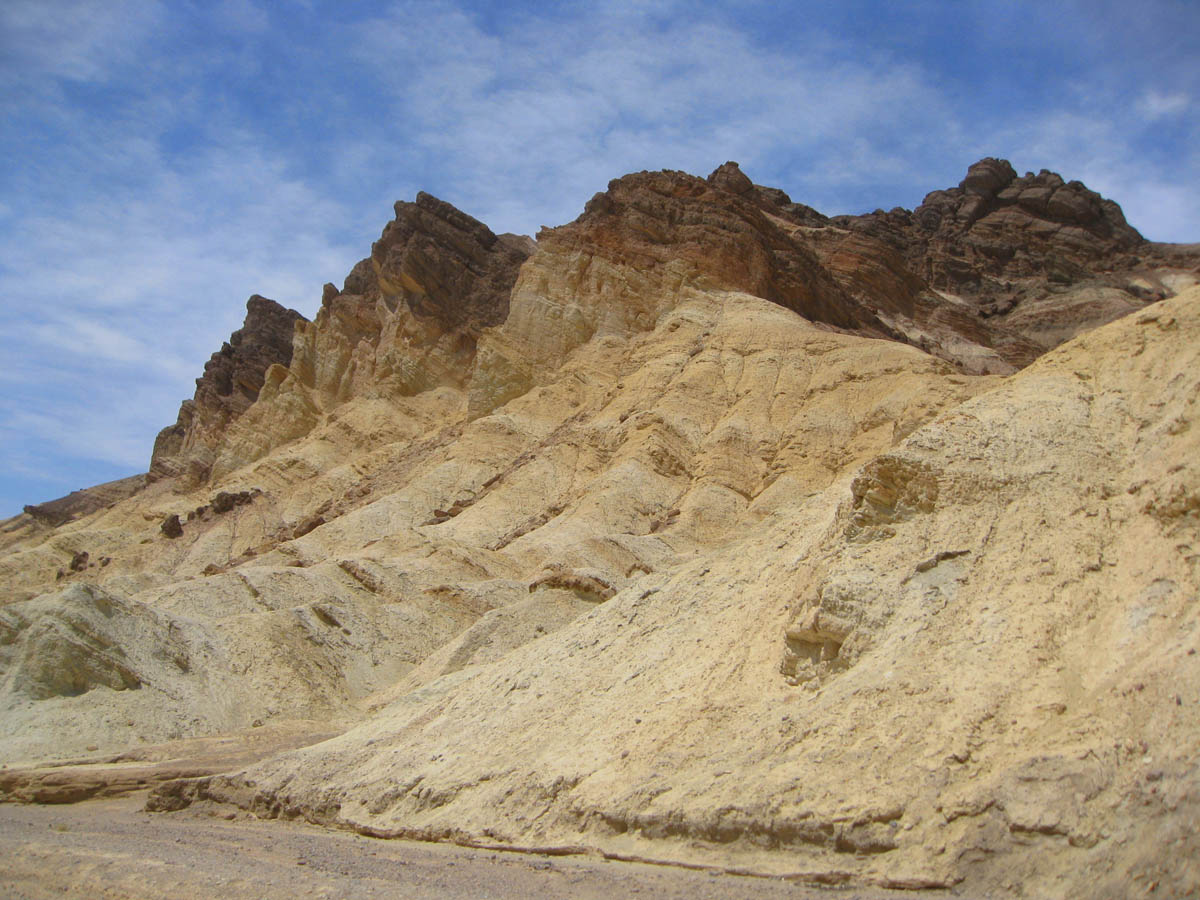 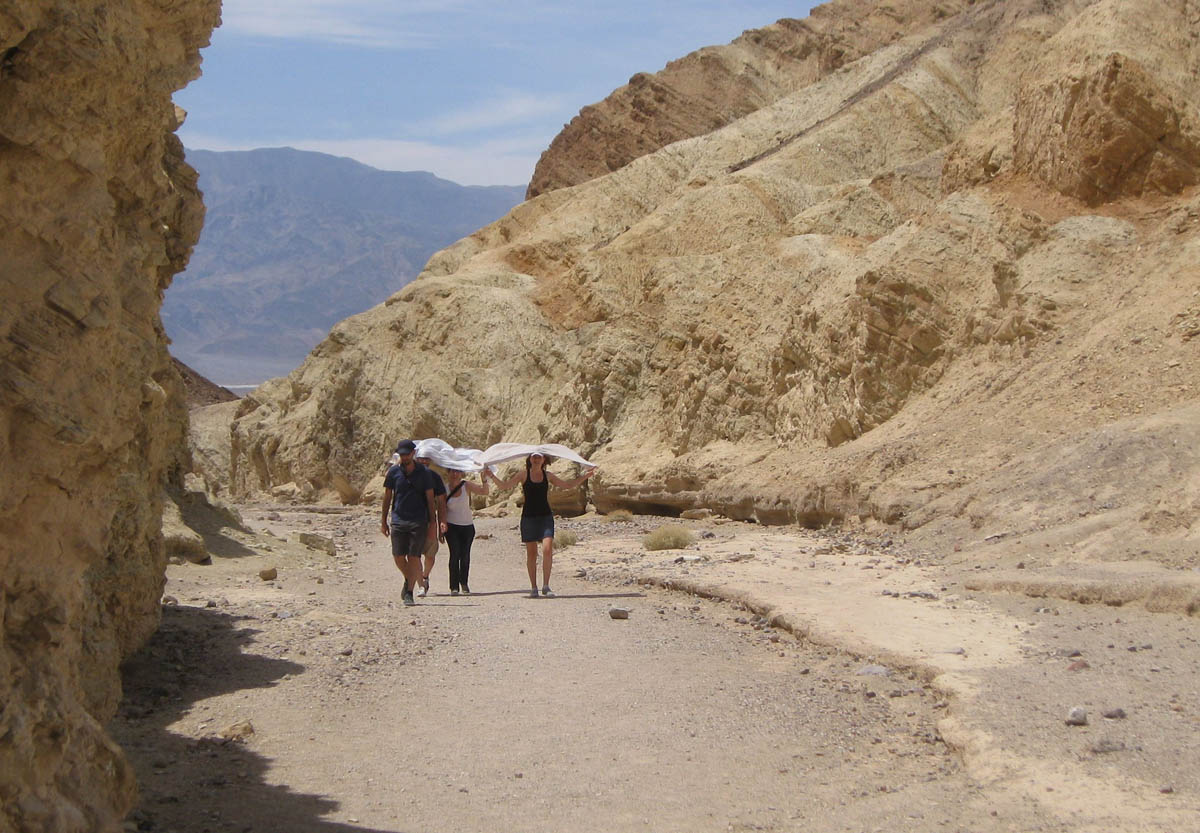 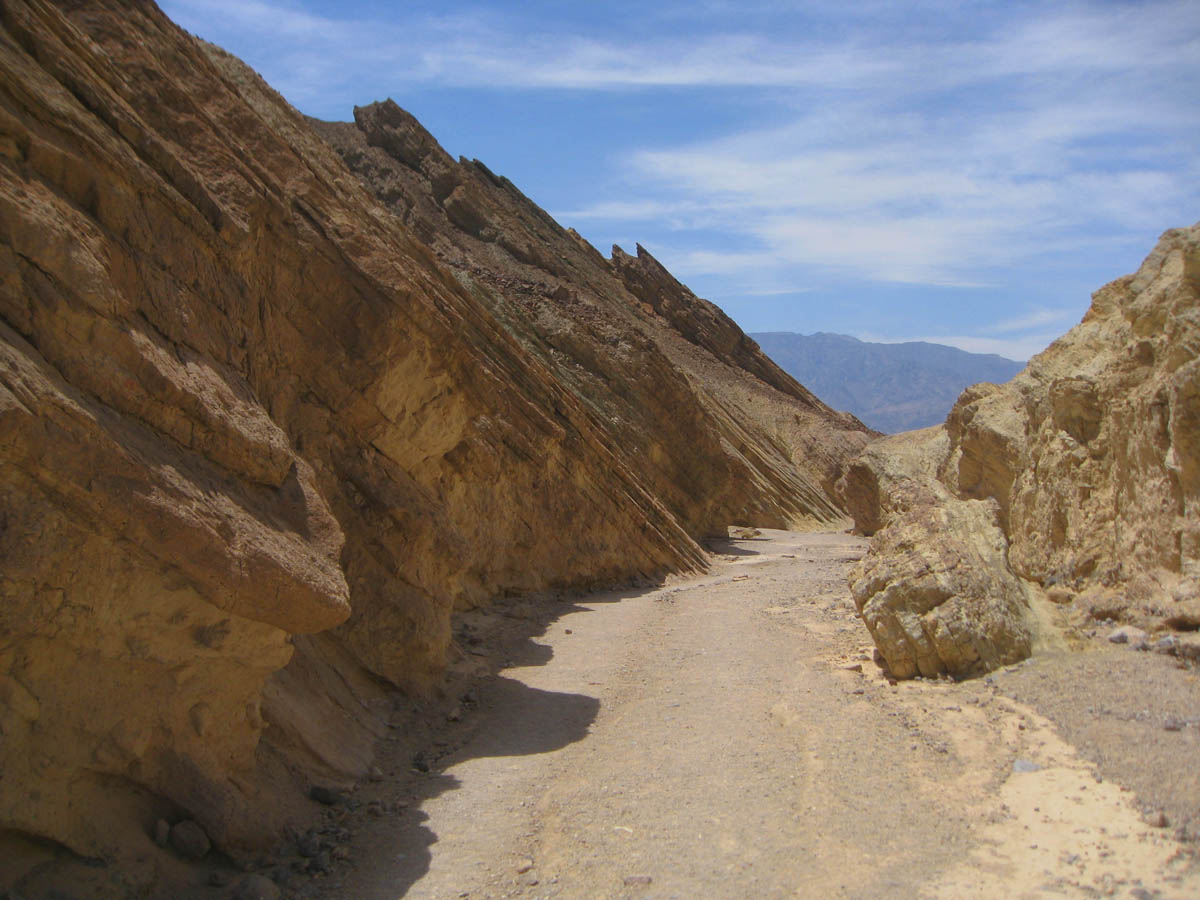 I want to reach the end of the trail, so I keep going, all the while hearing my dearly departed cave diving instructor Fitz’s voice in my ear saying “Being goal-oriented on a dive can get you killed.”  I start to see a few spots before my eyes, and smell that burnt skin smell from back in the day of tanning beds.  So I know it is time to turn and high-tail it back. 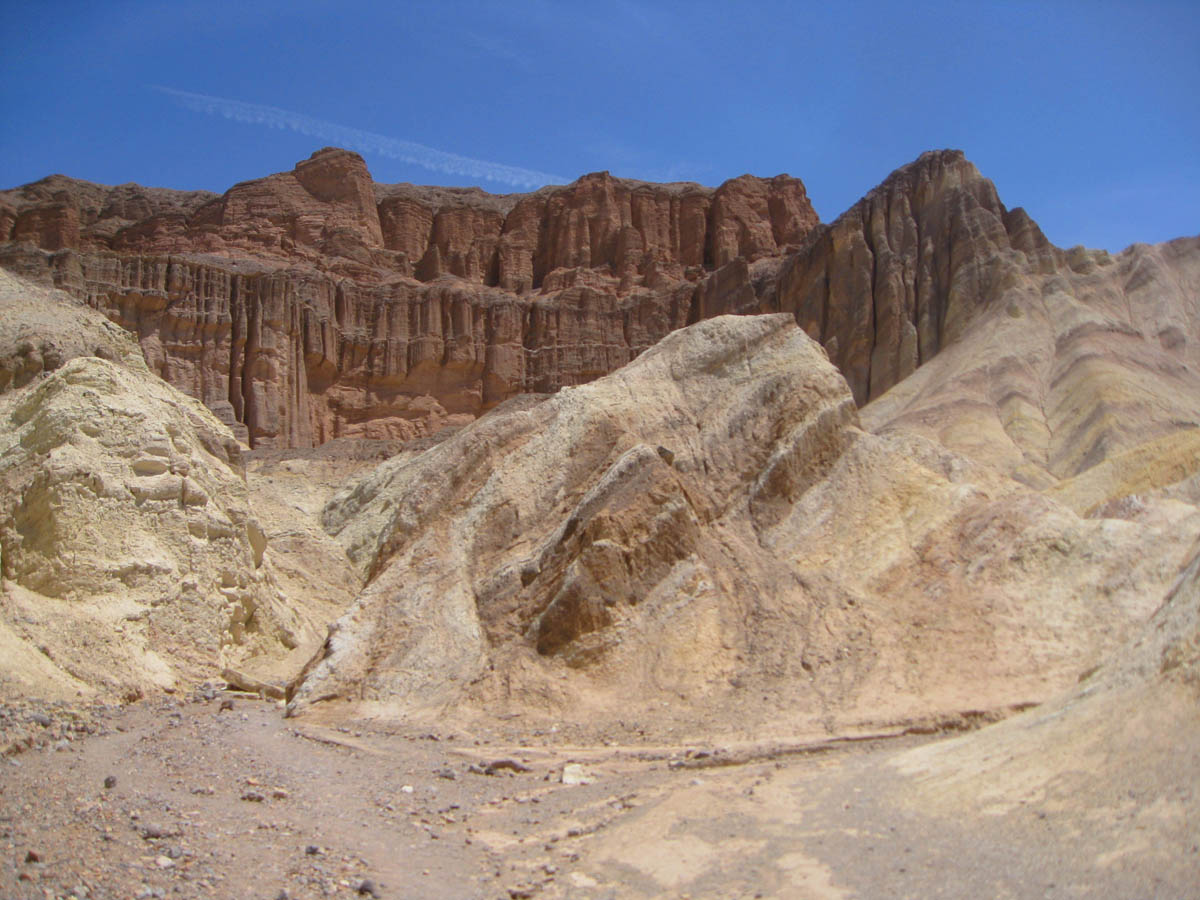 Red Cathedral in the distance. 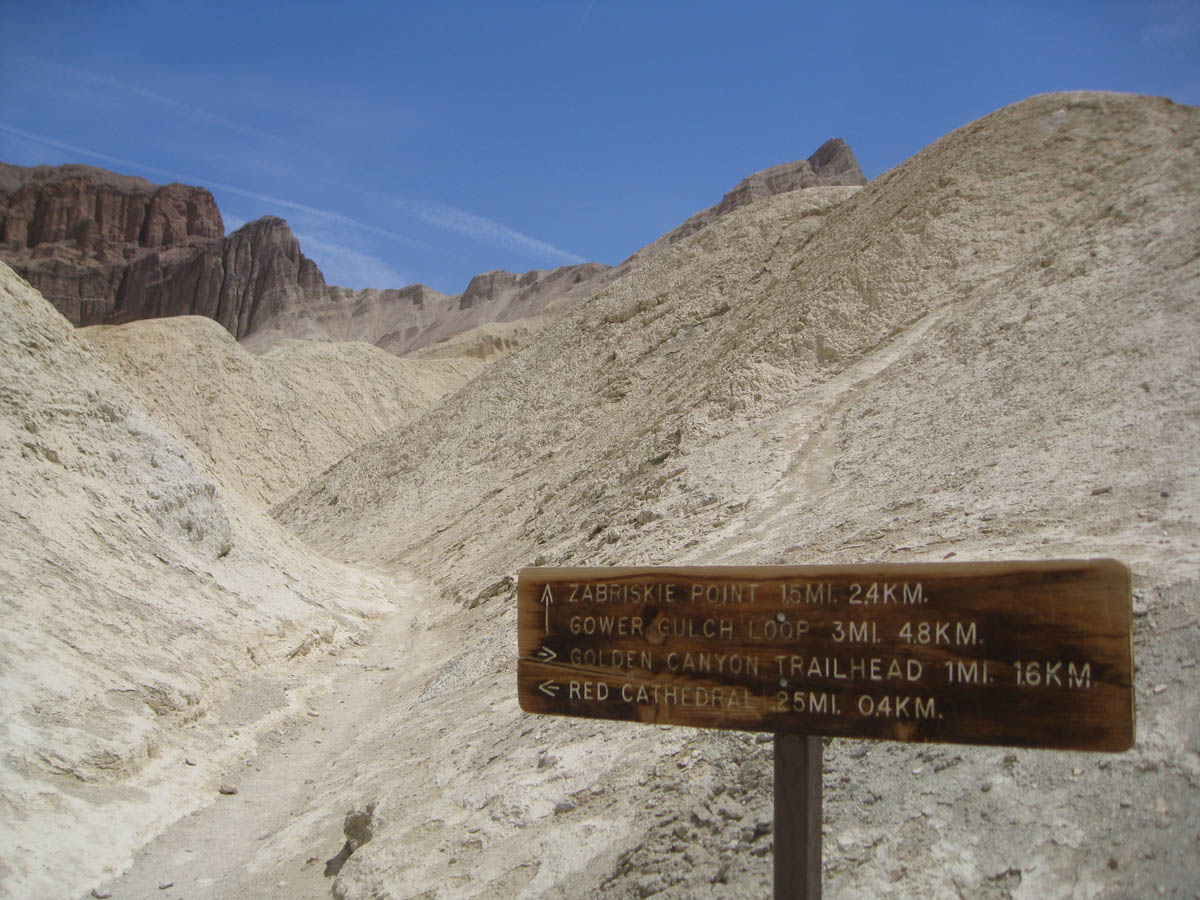 I still have plenty of water, and I know it is downhill all the way into the cooling breeze so I am confident I will be okay, but I need to pick up the pace as it is now burning hot. 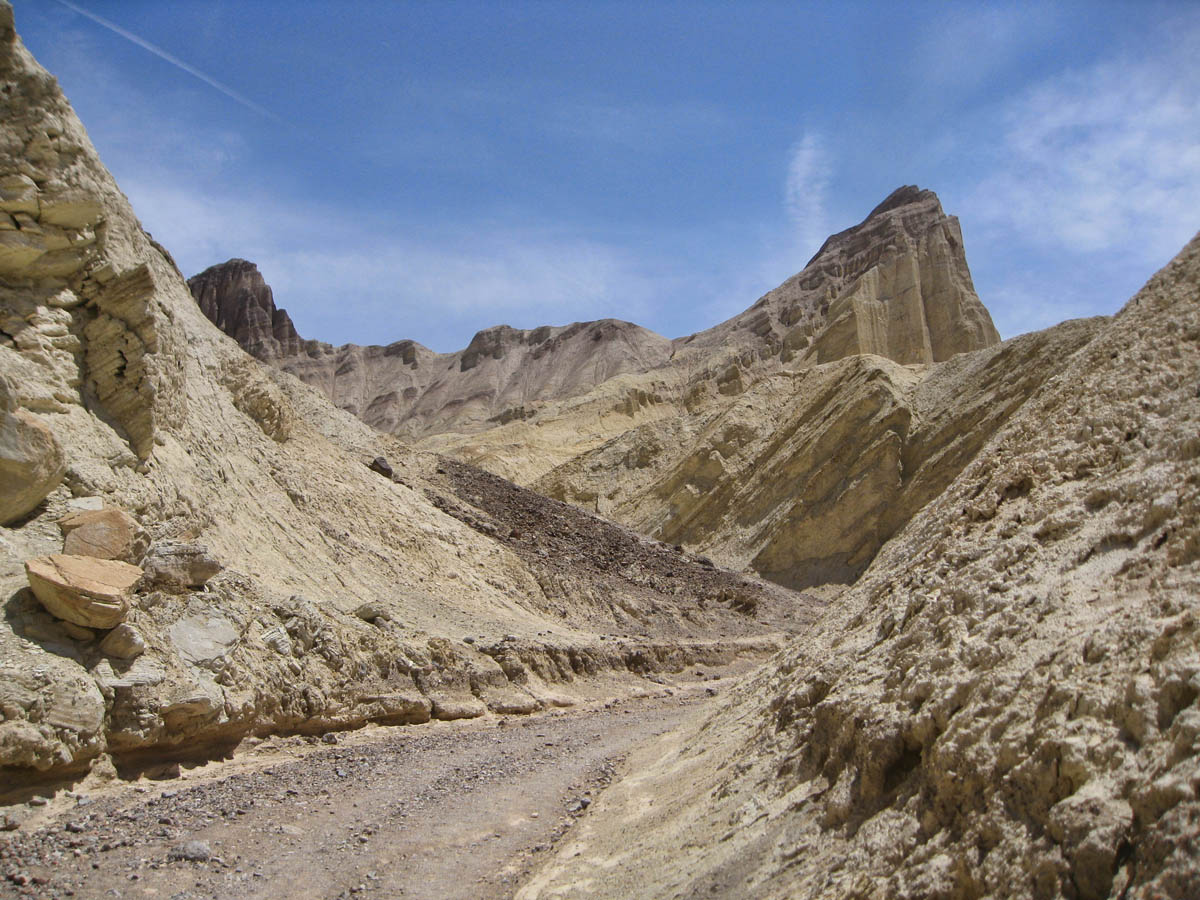 The back side of Manly Point near Zabriskie Point Trail junction 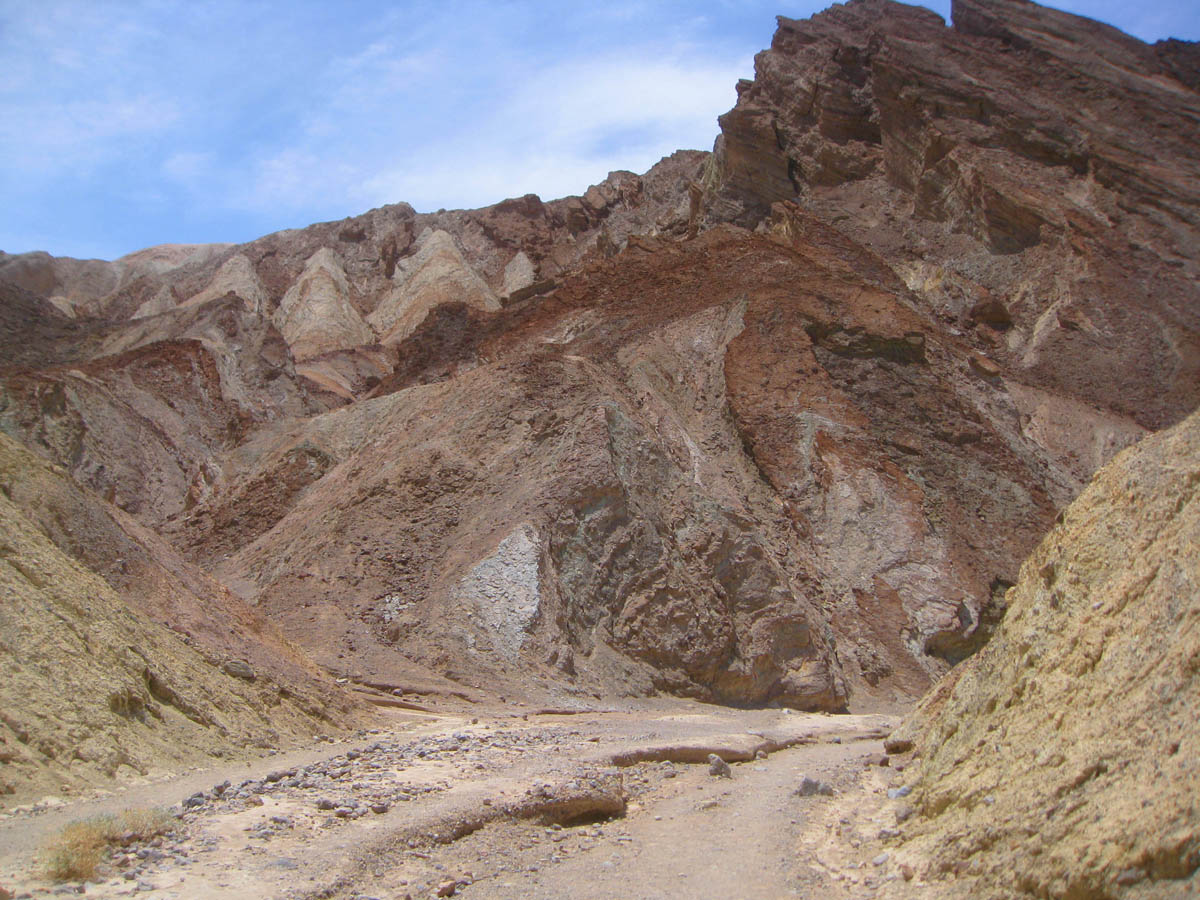 I go inside the Visitor’s Center and overhear the Ranger behind the desk telling the visitors that Badwater Road is now closed due to an emergency medical evacuation.  I wait until the crowd clears, then approach the ranger.  “Is this the woman in Golden Canyon?  I just left her.  Do you know if she is okay?”   She answers, “They are air-lifing her out now, but that is all I know.  It’s too dangerous to be hiking right now.  One to three people die in the park every year.”   (I later try to google for info, but cannot find any news.  I take this as a good sign…) 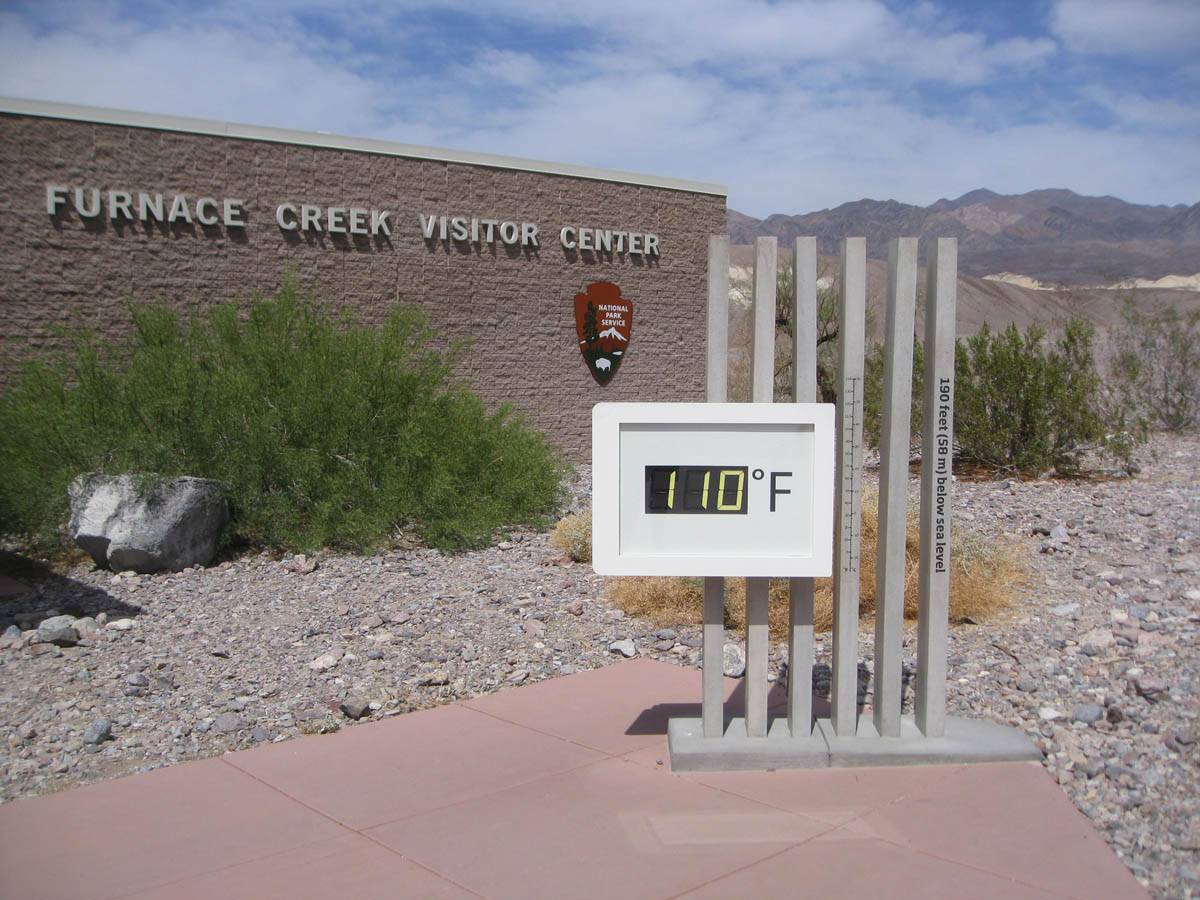 It is now 2:00pm, and the thermometer outside the Visitor Center reads 110 degrees.   I hang around inside where it’s cool for about an hour, looking at exhibits and sleeping during the movie.  😉   Then I go back to the rig.  I had left the thermostat on 88, but the wall thermometer now reads 91.   The AC keeps cutting off and on, but it it never drops below 90.  It shuts off without reaching the thermostat setting of 88.

I go for a swim in the pool to cool my body core temperature down, because I am now feeling like I can’t get water in me as fast as it is leaving.   I am nauseated, not sure if from dehydration, or from a bloated belly full of lukewarm water.  I have two ice cream sandwiches after the hike, and that is it as far as food for the next 24 hours.

Sleeping is nightmare.   I hang towels over the blinds on the windows for added insulation.  I put up the reflectix on the windshield, hang the cab curtain and close the opening above with a beach towel, all trying to minimize the space by closing off the cab.   My bedding is so hot, it feels like an electric blanket on high.  I cannot sleep,  so I get down on the floor, knowing it is always the coolest place in a Sticks and Bricks home.  So I try to sleep on the carpet, but it is no better.  Even the floor is hot to the touch.   I spend the entire night in what feels like a hallucinatory state, waking up covered in sweat every time the AC turns off, praying it will come back on again… 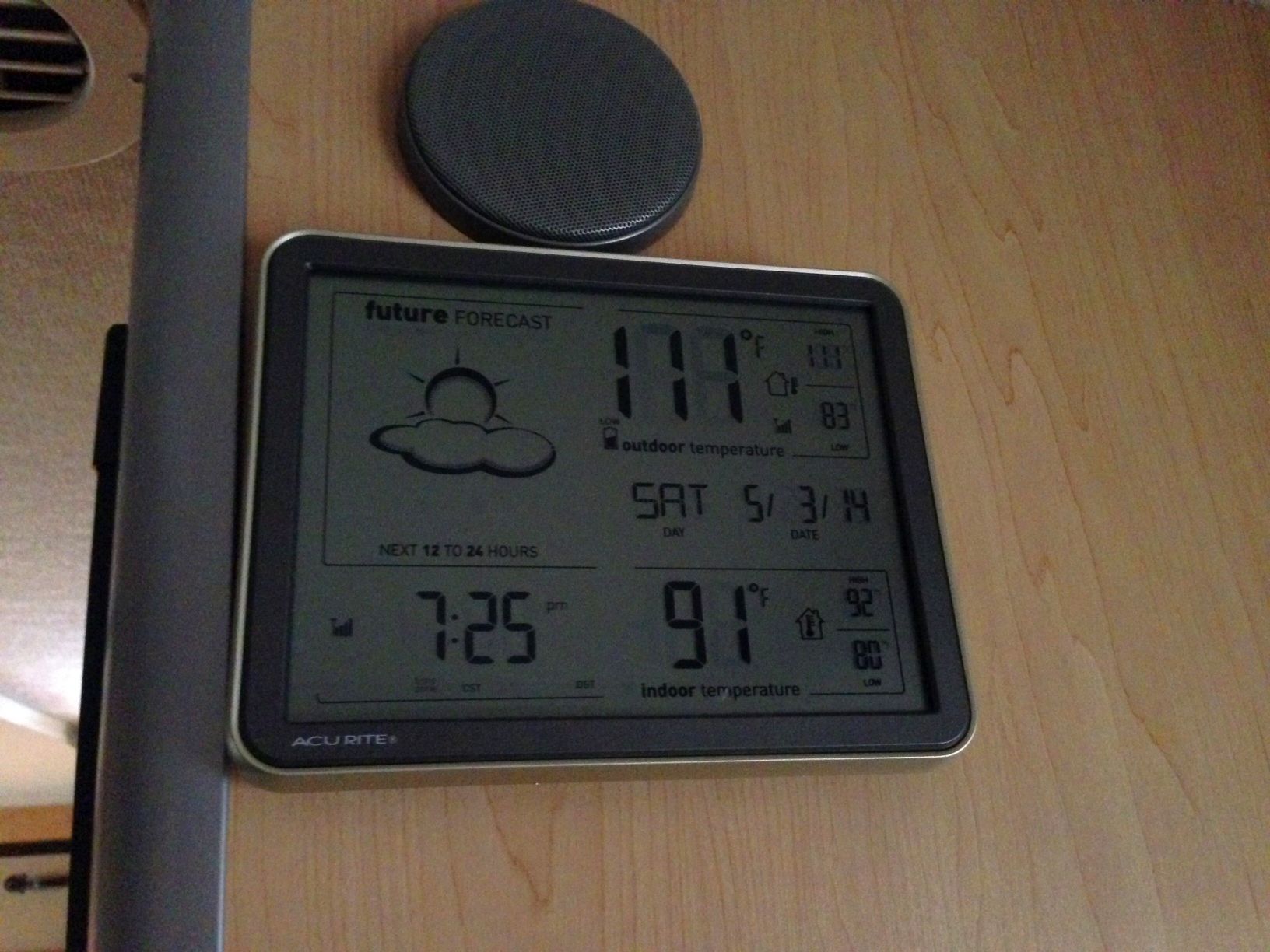