My National Geographic guide to the National Parks tells a story about a ranger who when asked by a visitor in Yosemite “What would you do if you only had a day to see Yosemite?,” his answer was, “I’d weep.” Imagine what he would say if he knew I only spent half a day… 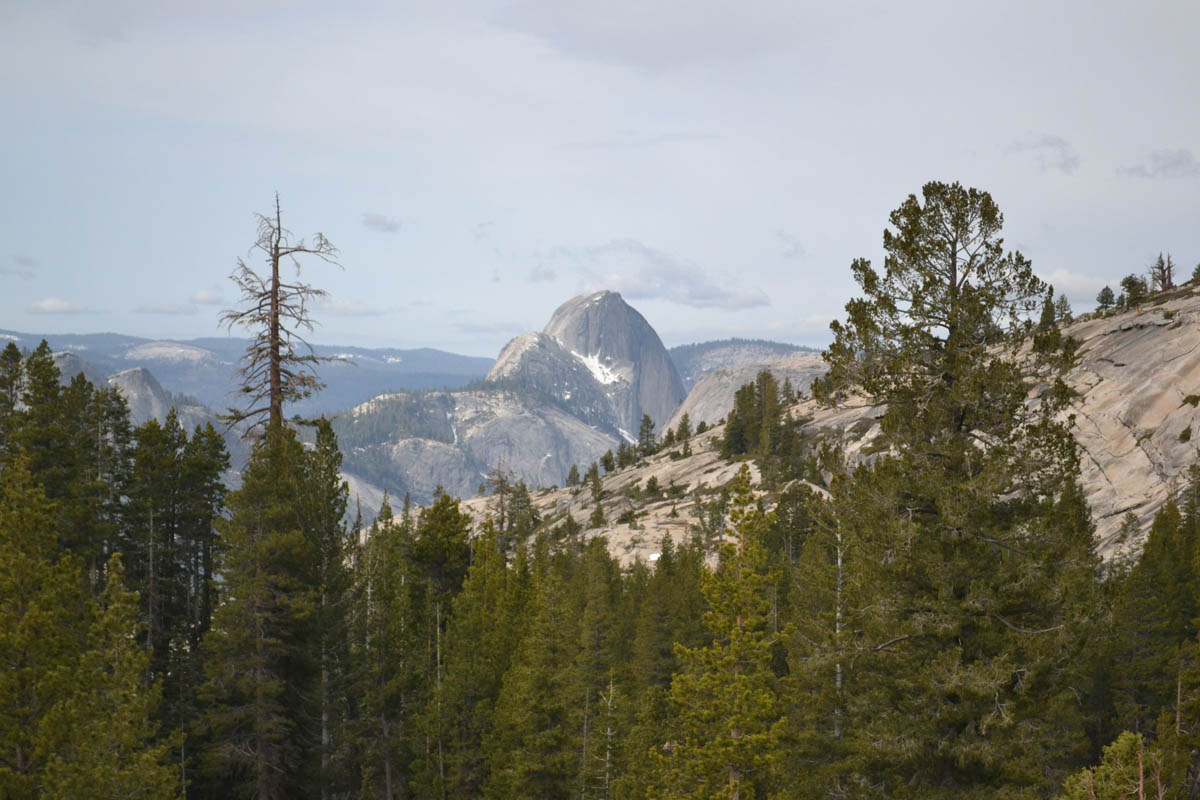 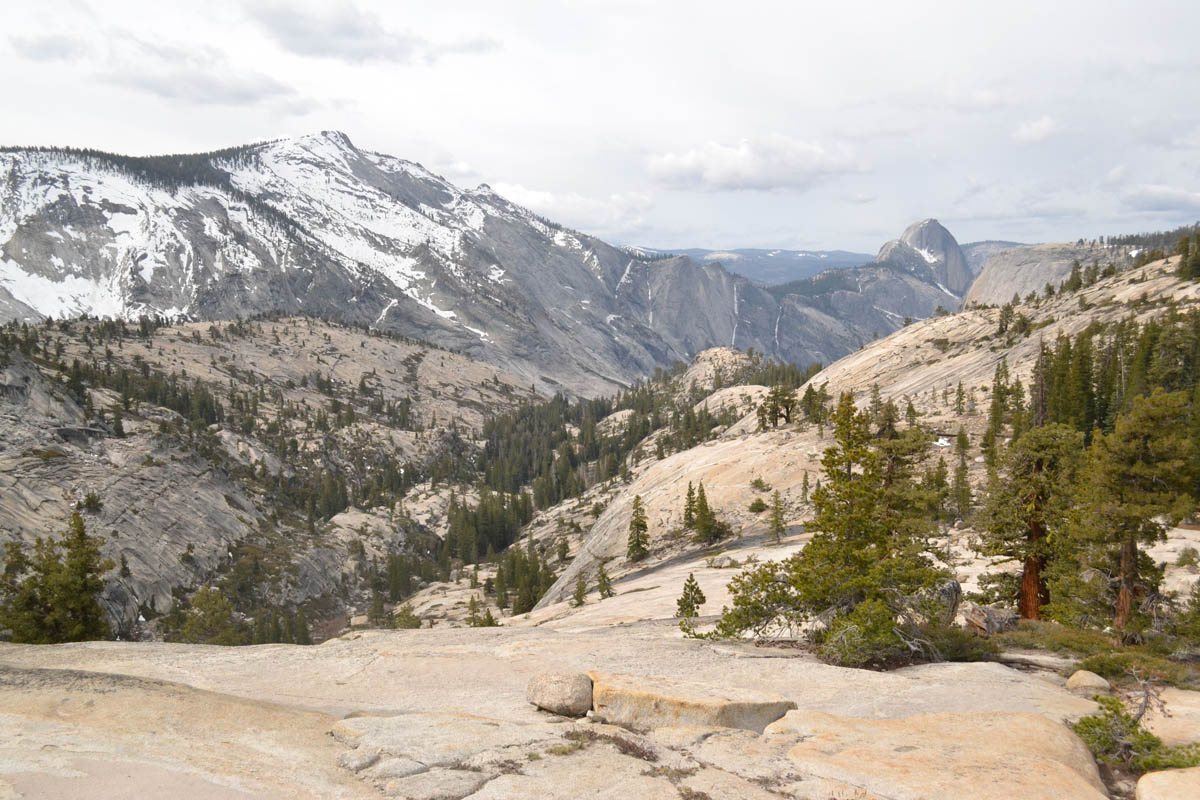 Stopping at Yosemite was an unexpected bonus. The Hwy 120 that goes up over Tioga Pass and connects Hwy 395 to the eastern side of the park is typically closed until late May. Winter snow buries the road 6 to 9 months out of the year, with drifts reaching up to 30 feet. They begin plowing in April, but it can take up to three months to finish, depending on depth and avalanche danger. So I knew the pass would be closed when I drove Hwy 395. I saw this as both a blessing and a curse. A curse because it meant driving right by a National Park I had never visited before. But a blessing that the pass was closed, otherwise it would be torture to bypass it due to time constraints. If I am to make the Skinnie Winnie National Rally in Canyonville, Oregon in two weeks, I knew Yosemite would have to wait.

However, the best news the helpful man at the Mammoth Lakes Visitor Center delivered? The pass was open! Due to the drought, the snowfall was light this year, so they had been able to clear the pass early. Camping at the Lower Lee Vinings Forest Service campground would put me just twelve miles from the gate! How could I pass up this opportunity? 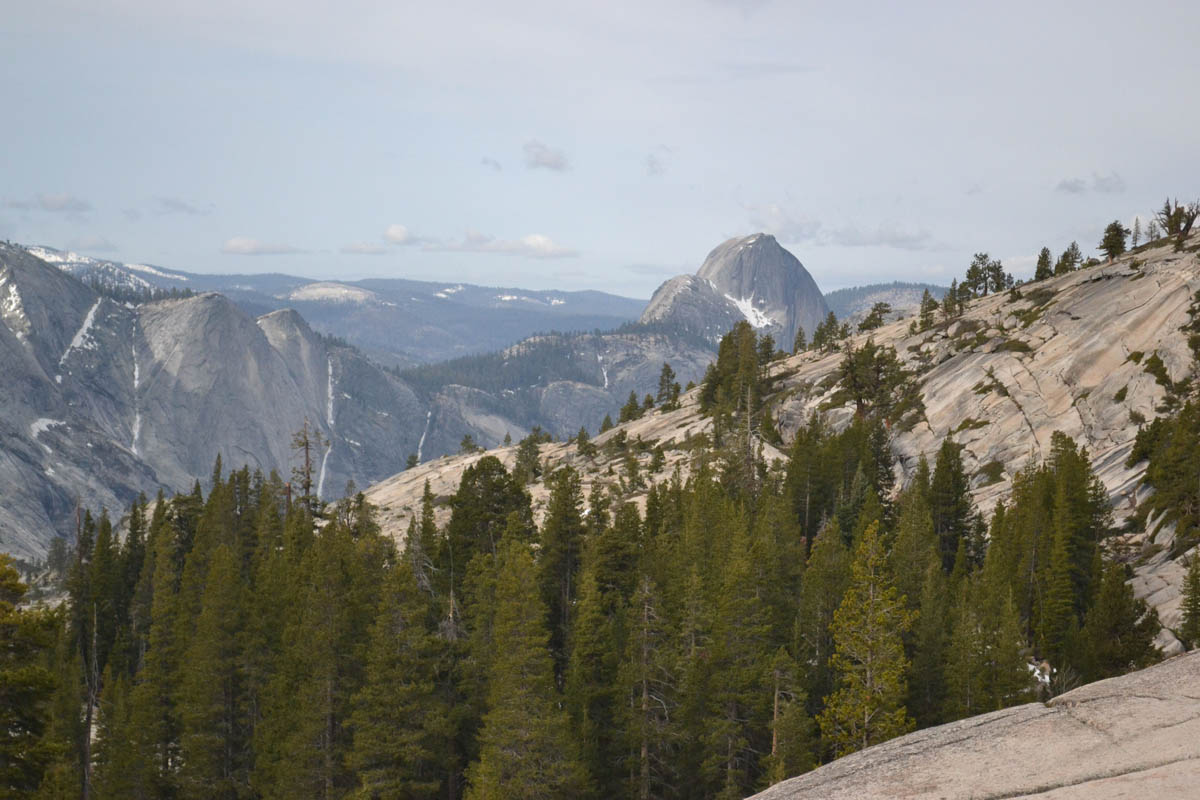 I wake up at sunrise as the pink rays are lighting up the sky. It is freezing in the rig, but I am warm under my down comforter, so I open up the window so I can hear the sound of the river and the birds. I lay there thinking there cannot be anything better in this world than right where I am right now, and how can I possibly leave it today? Leave this idyllic setting so close to Yosemite after only a few hours?? But then I ask myself, “What is the alternative? I can’t quit today without giving notice. Besides, I have no cell service here!” haha! So I decide instead of being sad about only having five hours in one of our most famous National Parks, I am going to be grateful for the unexpected gift of the visit.

I hear that the 12 mile road up Tioga Pass is steep and curvy. I worry about the little 20 year old Tracker, and make a promise that if he will make it up the mountain, I will not make him go more than 25mph! It takes over an hour to go 12 miles over the pass, and six minutes to get back down! Haha! 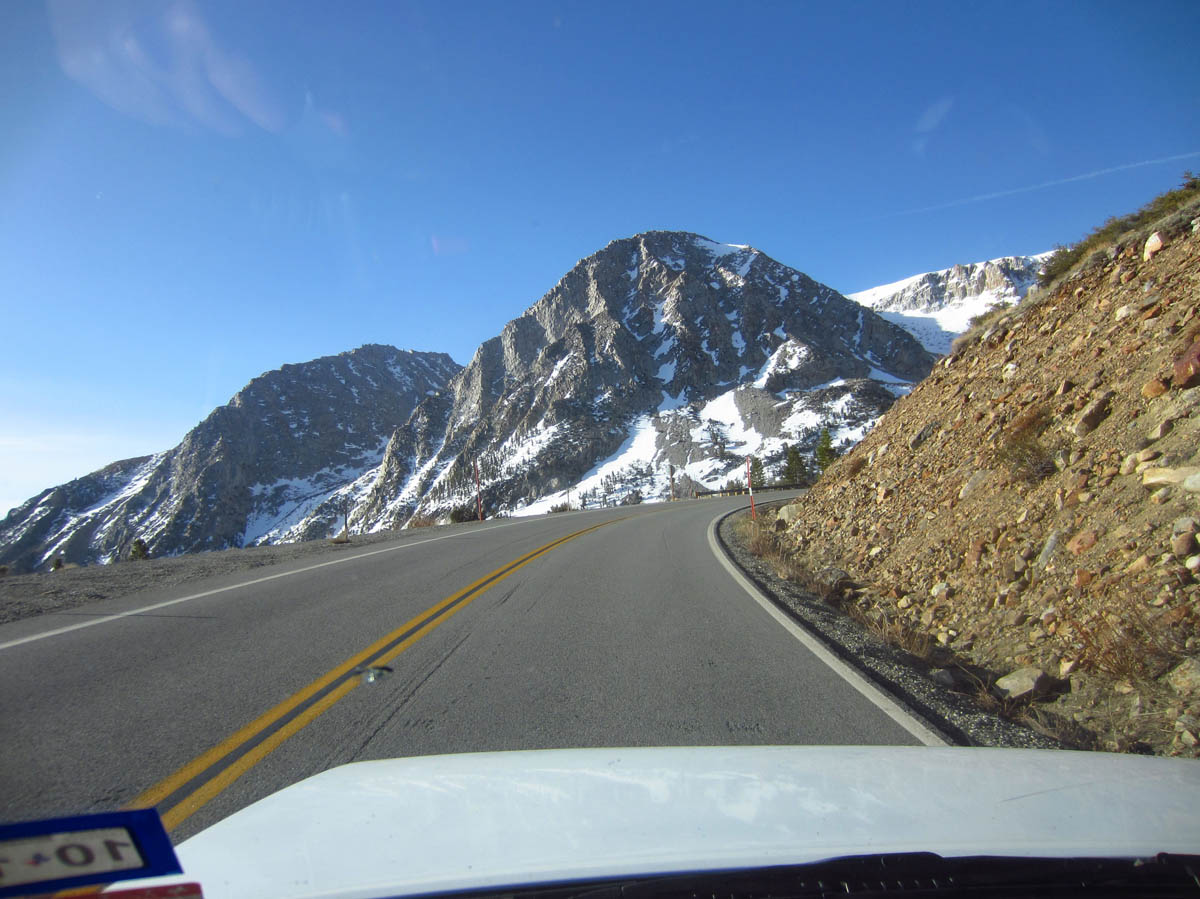 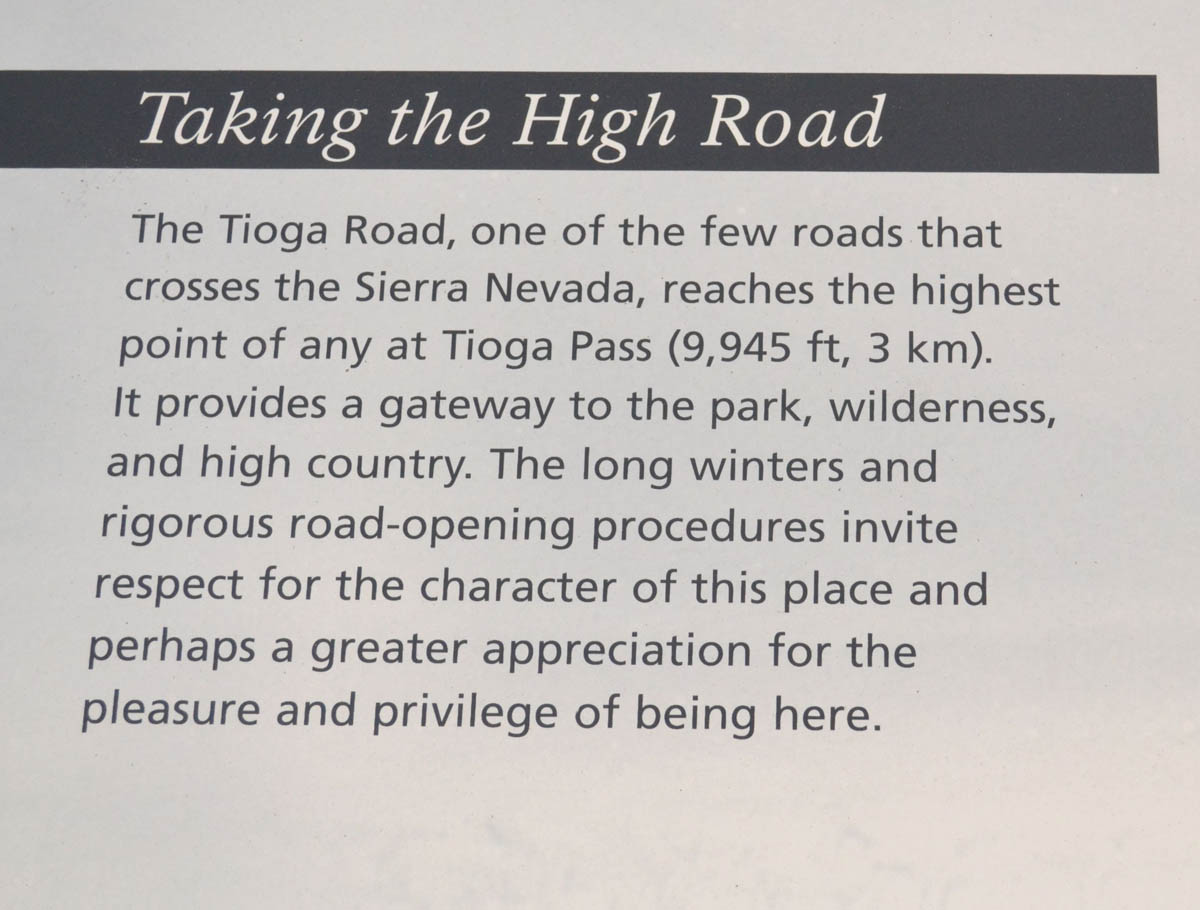 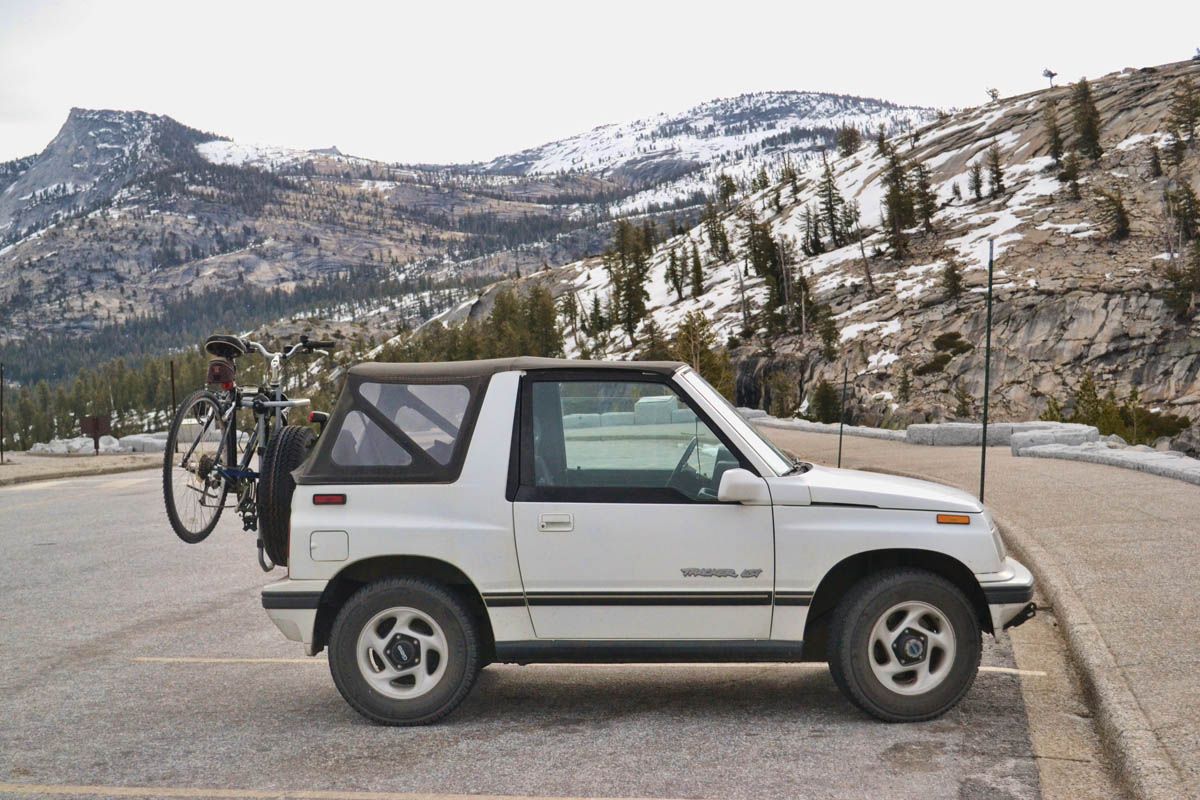 It’s no sacrifice to stop several times along the road to let the little Tracker rest. Every pullout over the pass offers some spectacular postcard scene. Finally, I see the gate ahead! Elevation 9,943 ft. We made it! The Tracker is Triumphant!

I chat with the woman staffing the entrance gate. She confirms what the man at Mammoth Lakes Visitor Center has told me. “Don’t go any further west than Olmstead Point. Yosemite Valley is another 55 miles from there. It would take you three hours round trip if you don’t stop –not worth it for a half a day.” She tells me that Olmstead Point will give me a good look at the back of Half Dome and the valley, and recommends I spend the rest of my time walking around Tuolumne Meadow, rather than pushing further into the park. 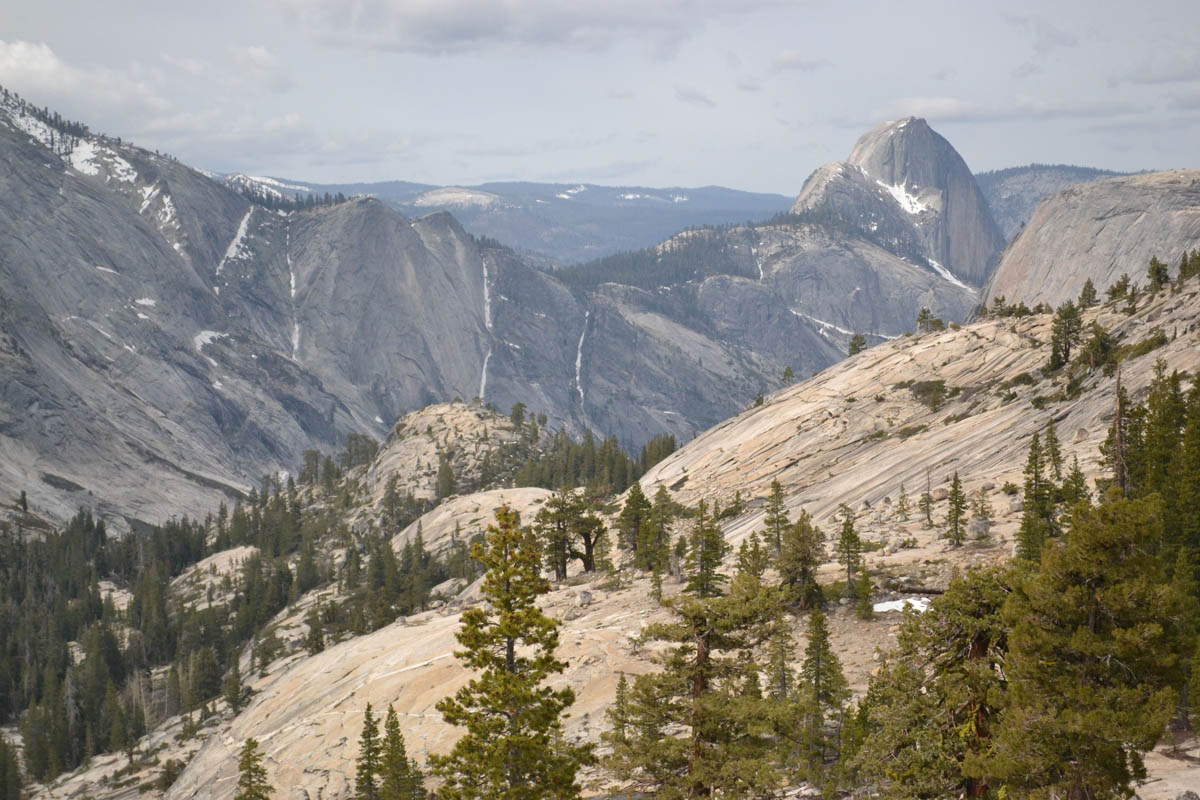 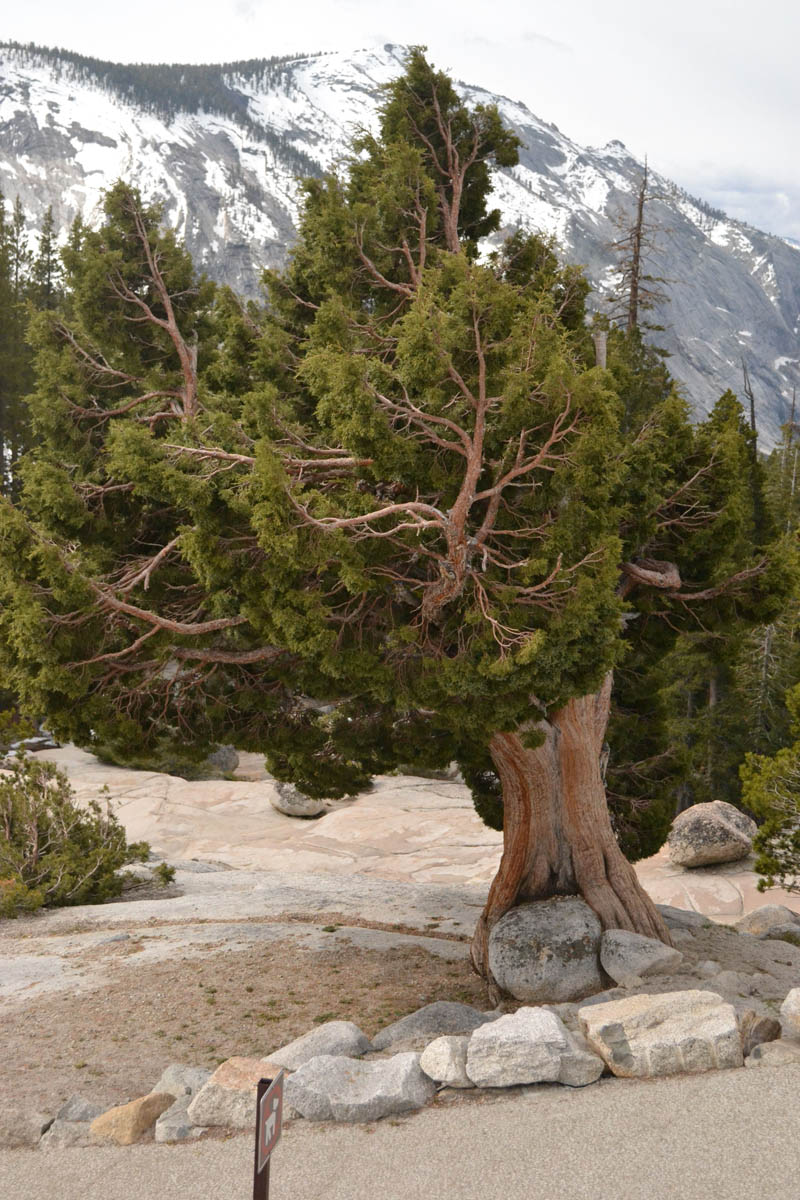 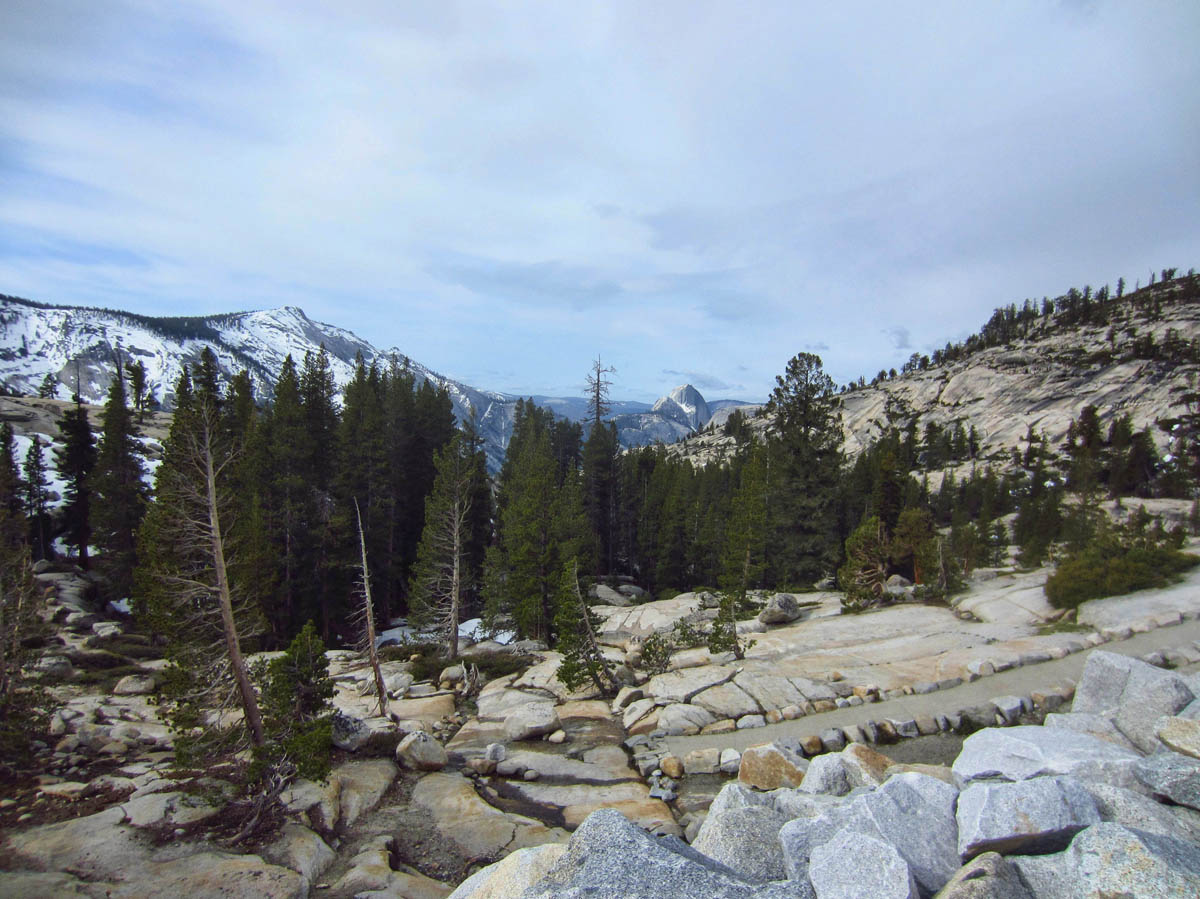 I decide to make a B-line to Olmstead Point, and explore on my way back, as clouds are starting to roll in so I want to get some photos before Half Dome is engulfed.
Olmstead Point is named after Frederick Olmstead, considered to be the father of American landscape architecture, best known for his design of New York’s Central Park (and as a former resident, I must note Atlanta’s much smaller Piedmont Park as well.) He was instrumental in the writing of a policy to protect Yosemite’s scenery and wildlife, which is considered a classic National Park treatise. 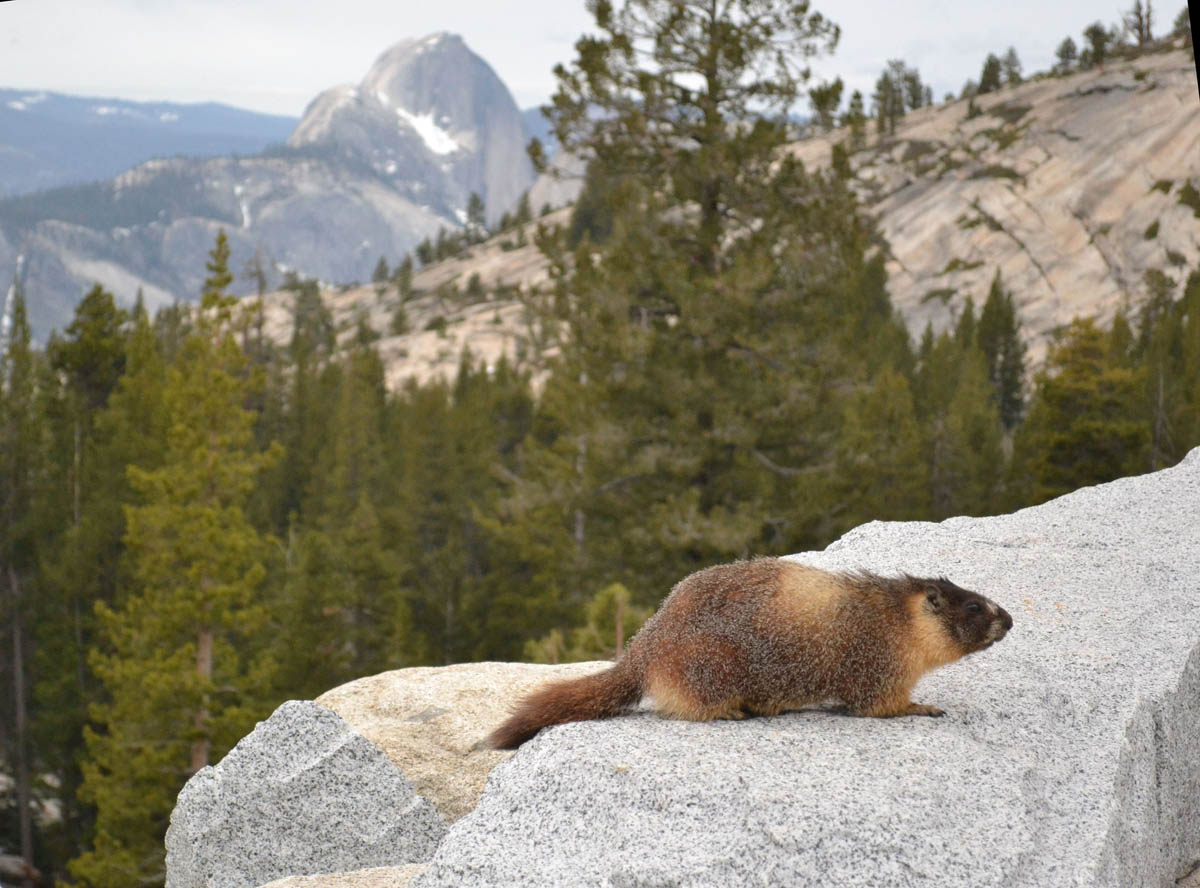 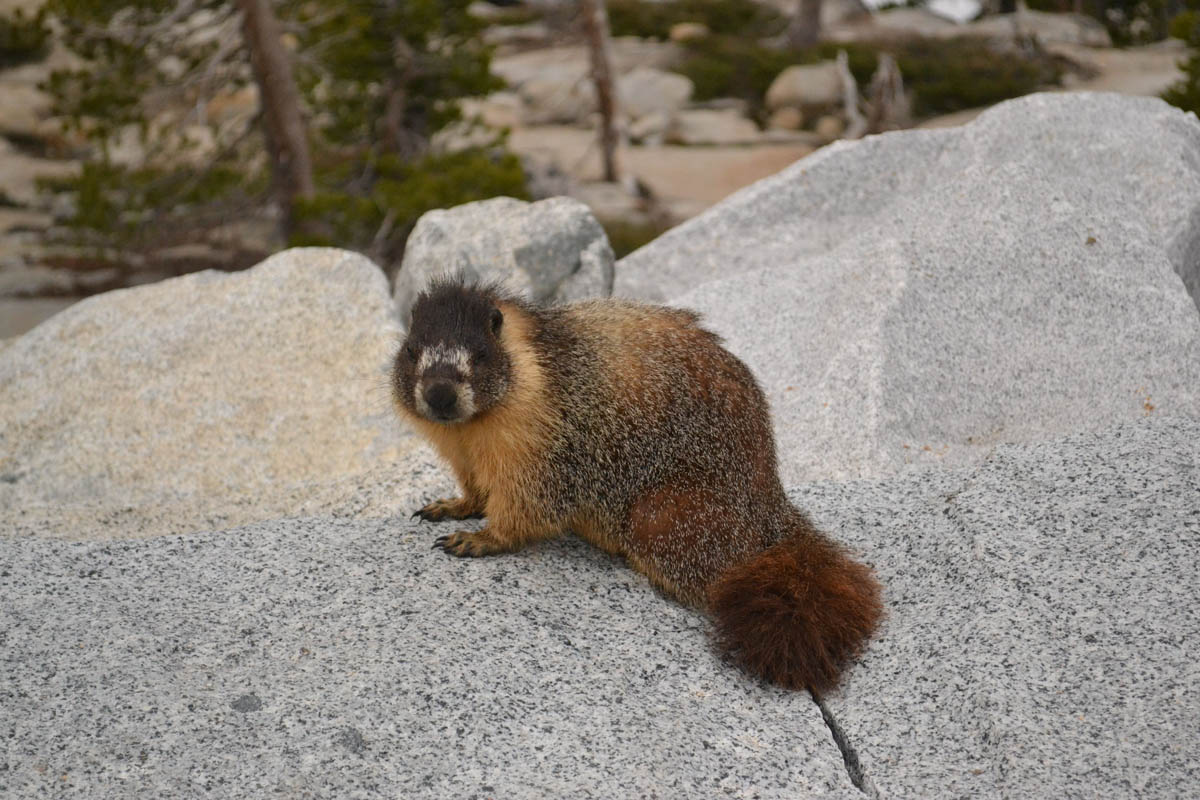 I spend some time hiking on the granite boulders just below the overlook, and I realize this is like my favorite National Park, Acadia, on steroids!! It is my kind of hiking through fragrant forests and over sticky granite boulders in the chilly mountain air. It feels frigid at the top of the point, but I put on my gloves, fleece headband and jacket, and find a rock out of the wind to enjoy my favorite hiking snack, a PBJ with blackberry jam, before I journey a little further down the path. I find it interesting that it is 55 miles into the valley by road, but only 9.6 miles by hiking trail through the canyon. If only I had a ride back up! 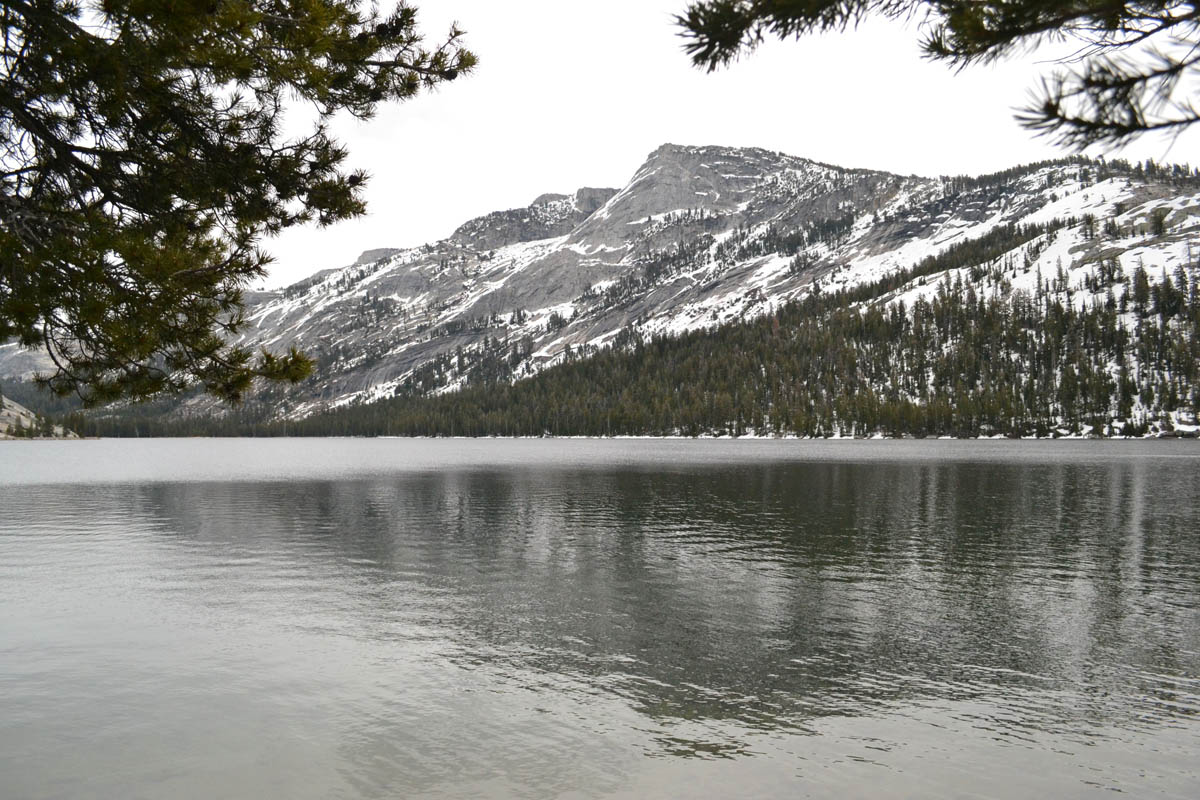 It is easy to see how Ansel Adams was inspired to black and white photography. This photo was taken in color, but appears B&W due to the contrast. 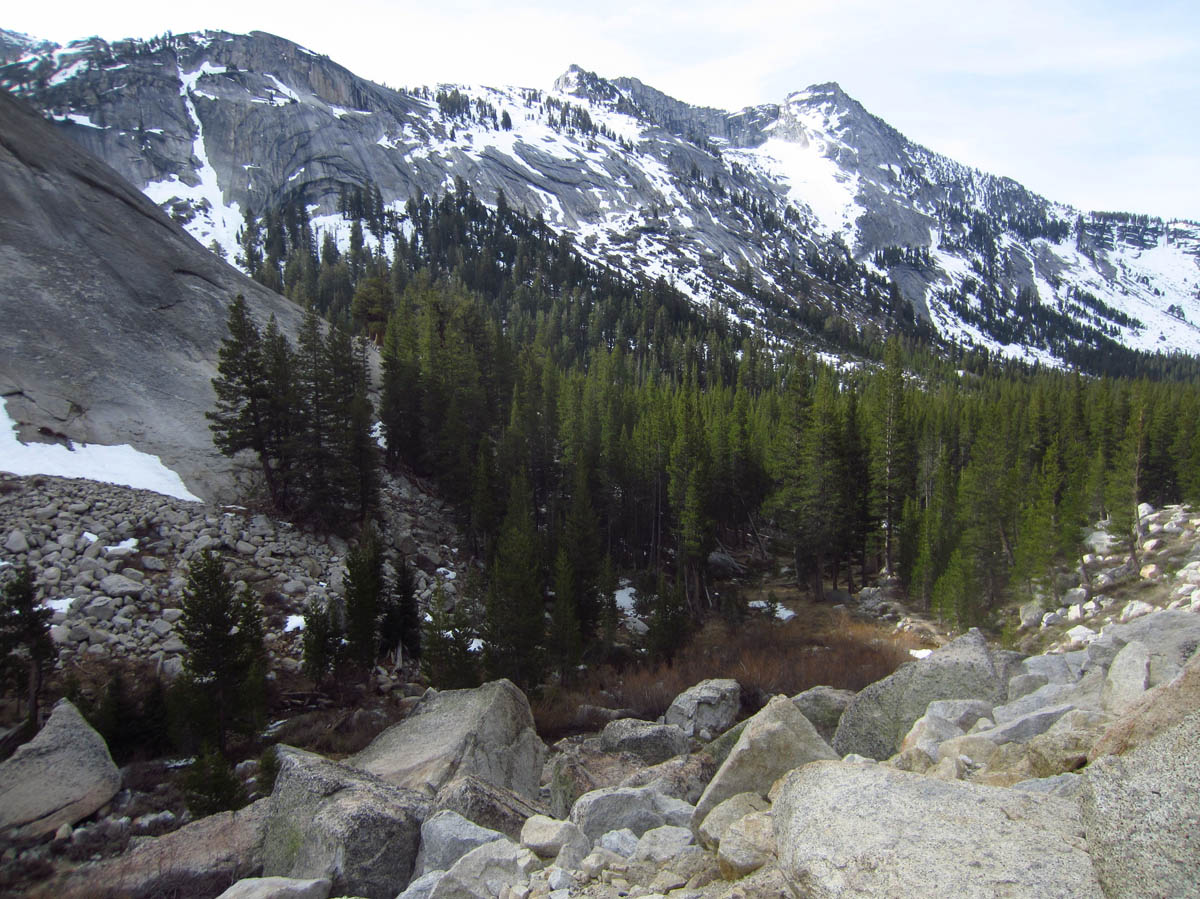 The ranger at the kiosk recommends that I also stop at the Tuolumne Meadow, one of the highest alpine meadows in the Sierra Mountains. There are short hikes throughout the meadow leading to Soda Springs, a cold carbonated spring, the source of which is a mystery. There are also rustic cabins built around the turn of the century, purchased by the Sierra Club for preservation, now owned by the National Park. 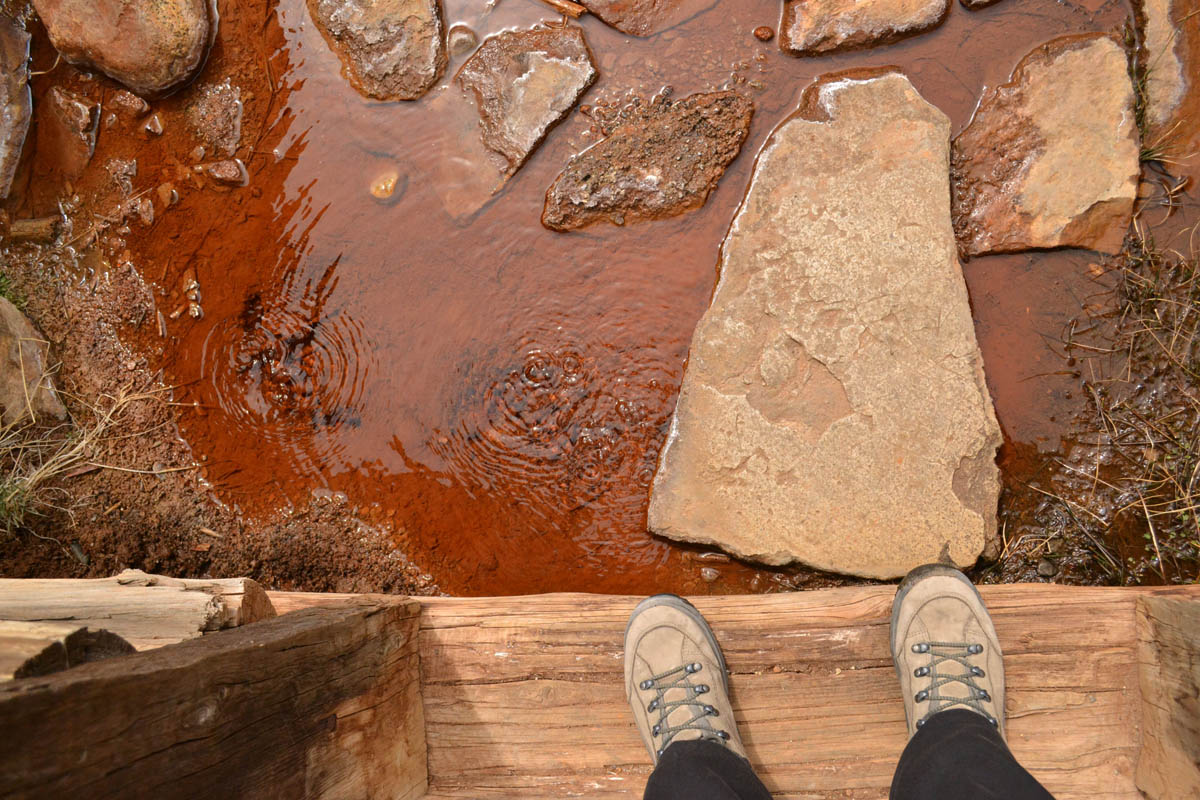 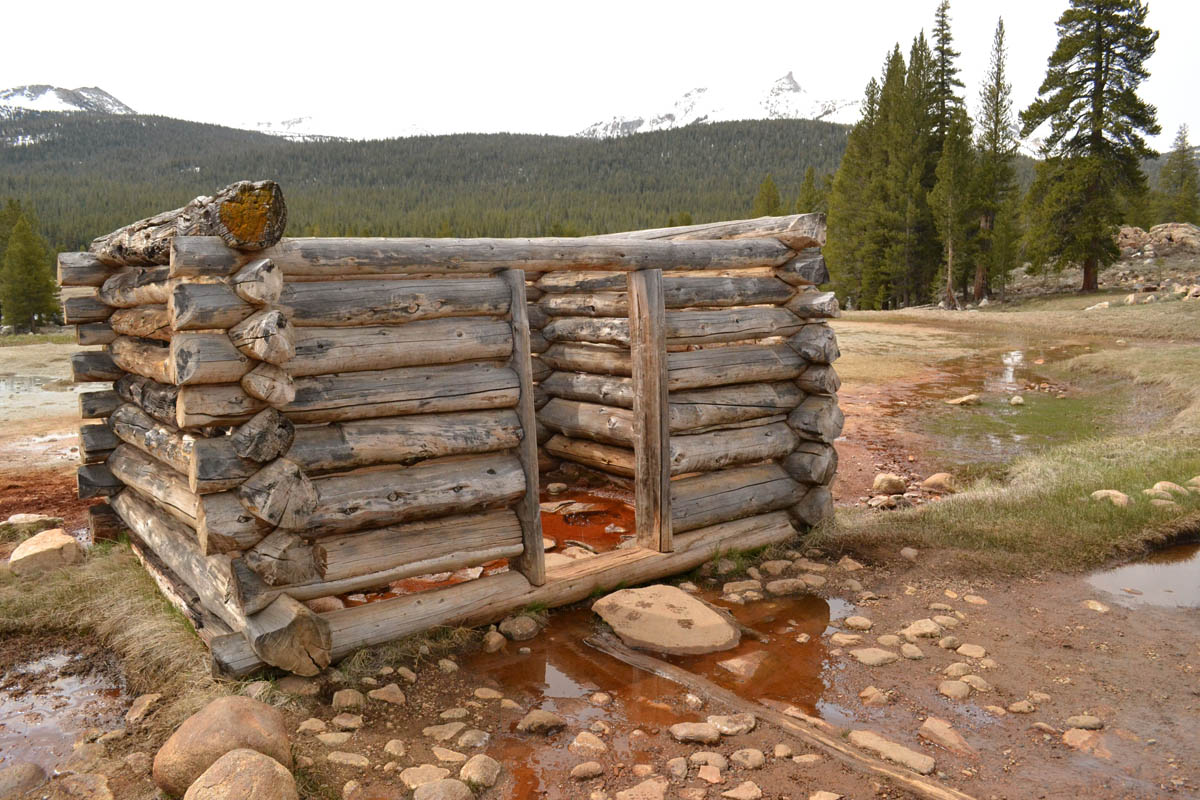 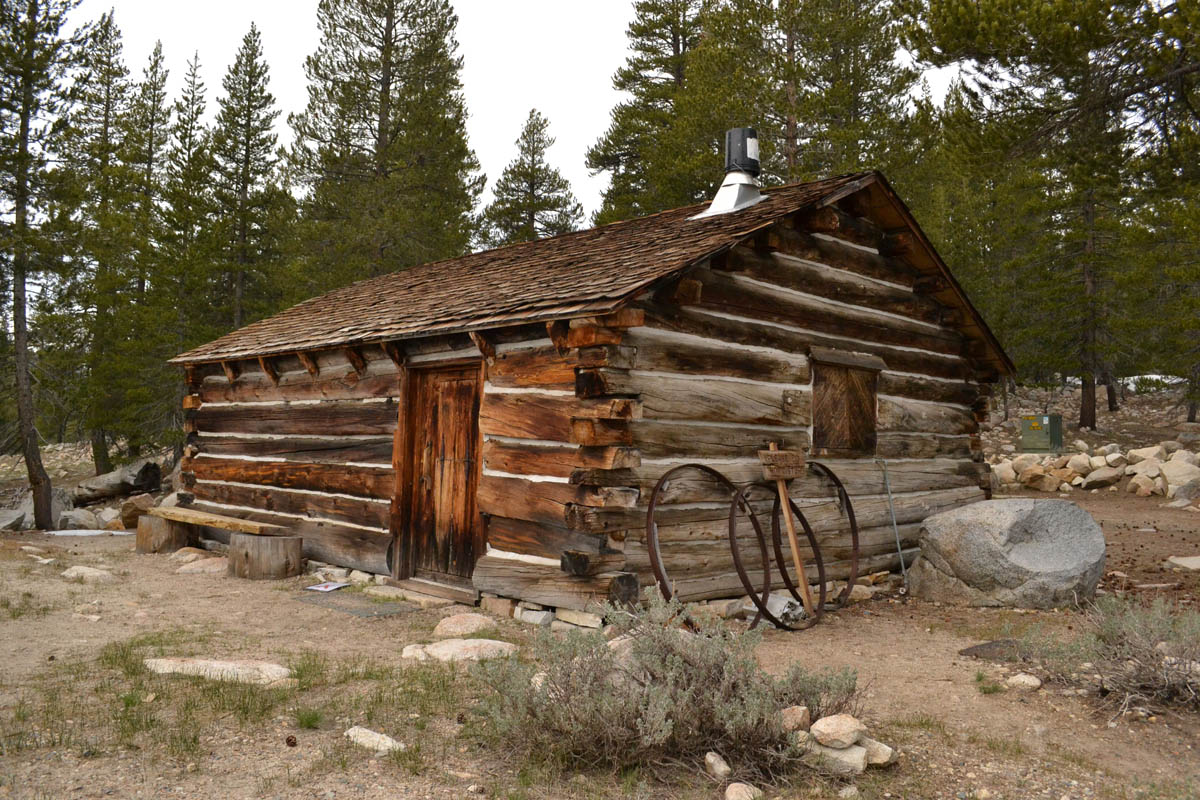 McCauley Cabin, built 1897 by Jean Baptiste Lembert, purchased in 1912 by the Sierra Club for preservation. 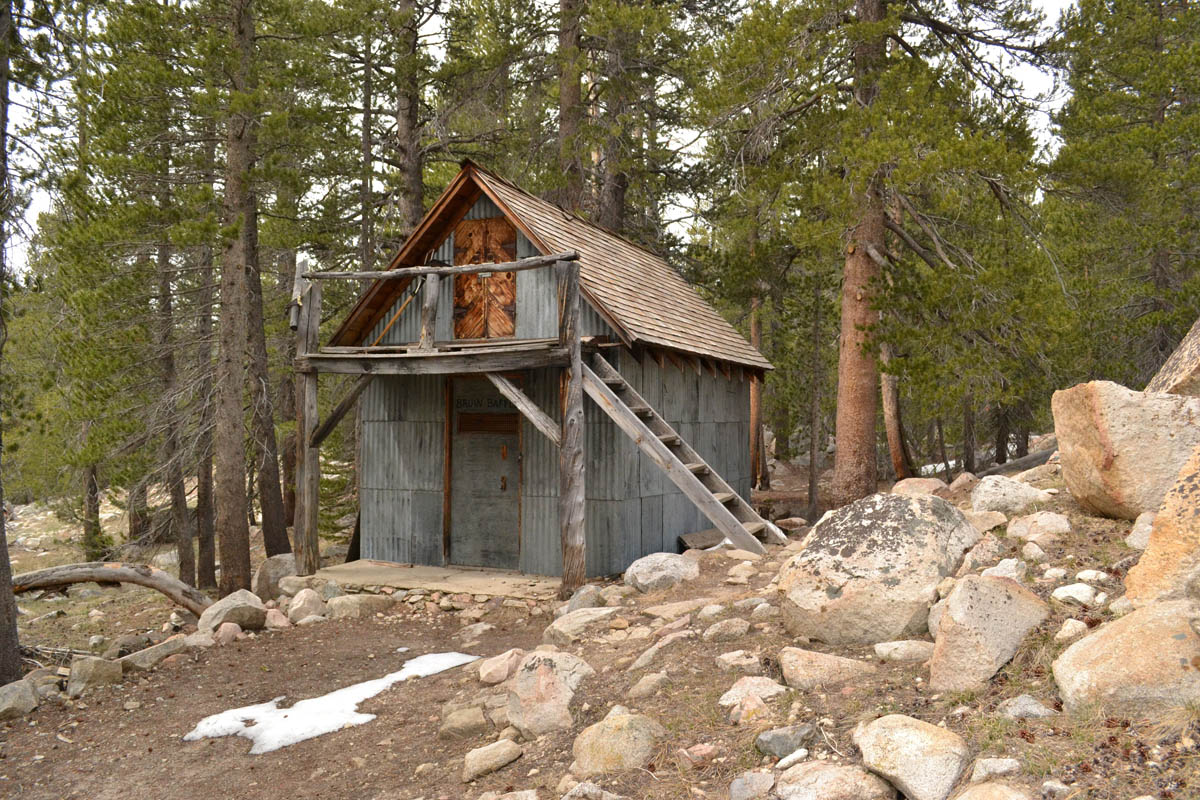 Where can I order the architectural plans?

Walking alongside the river in the Tuolumne high alpine meadow, there are quotes from John Muir posted on the information boards, such as “In every walk with nature, one receives far more than he seeks.” I am surrounded by tall pine trees and snow covered peaks, all alone in the meadow. I realize how close to “heaven on earth” I am right now. Yes, I could take another vacation day, but one and a half days seems just as absurd as a half day. After only 17 miles into the park, it is clear that it would take a week to scratch the surface. Even the smallest meadow deserves as much. I am appreciative of the gift this walk has given, for as John Muir noted, I have received far more than I sought.

“Keep close to nature’s heart…and break clear away once in a while, and climb a mountain or spend a week in the woods. Wash your spirit clean.” ~ John Muir 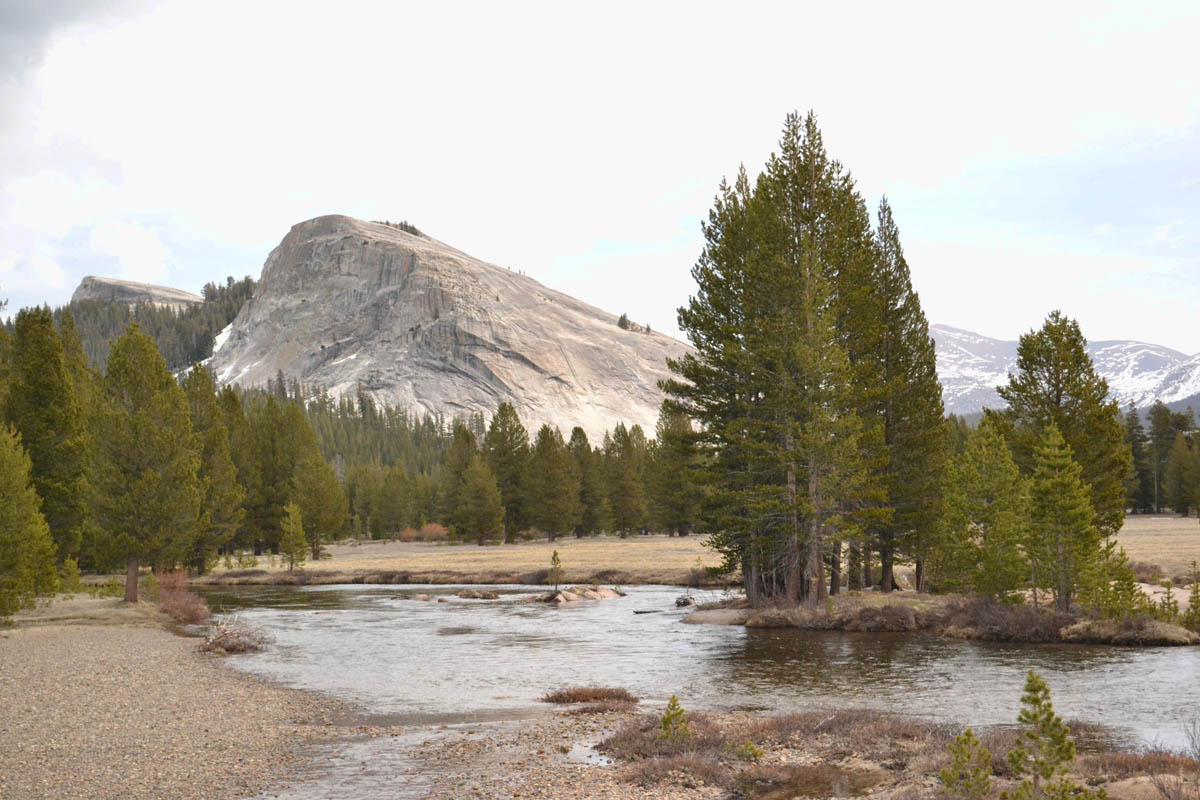 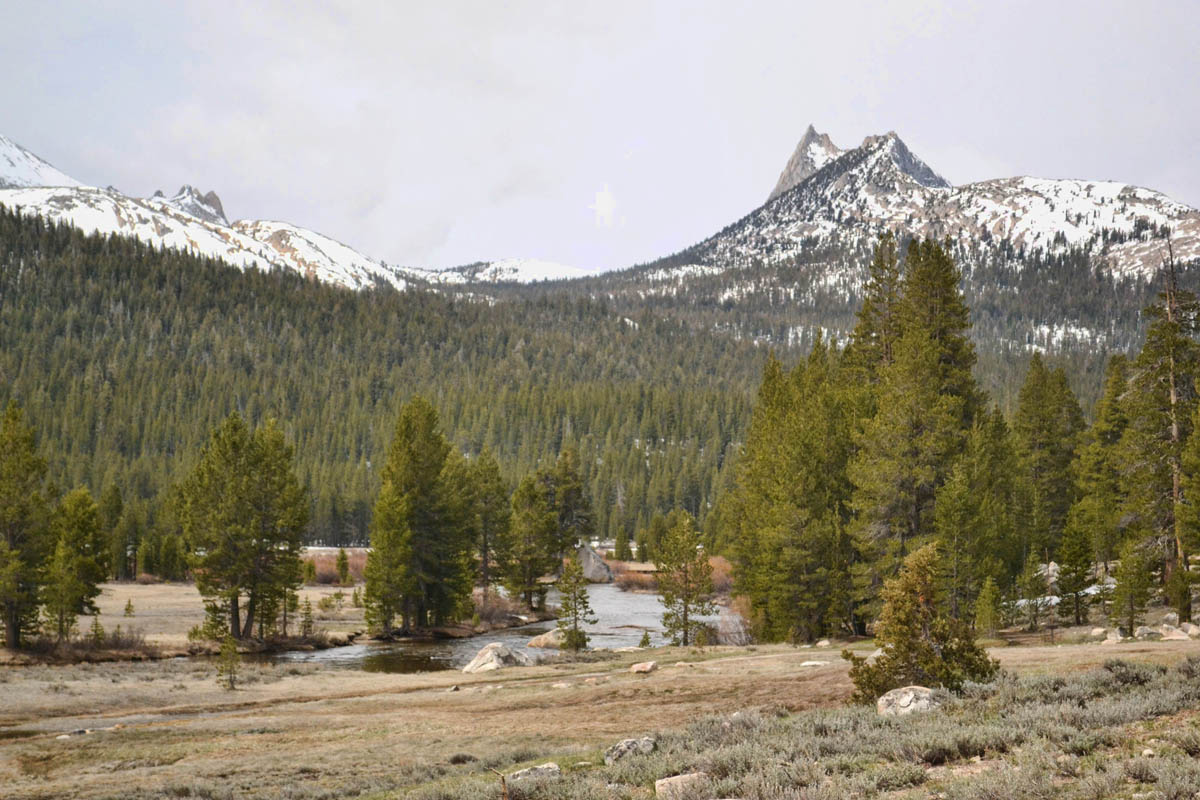 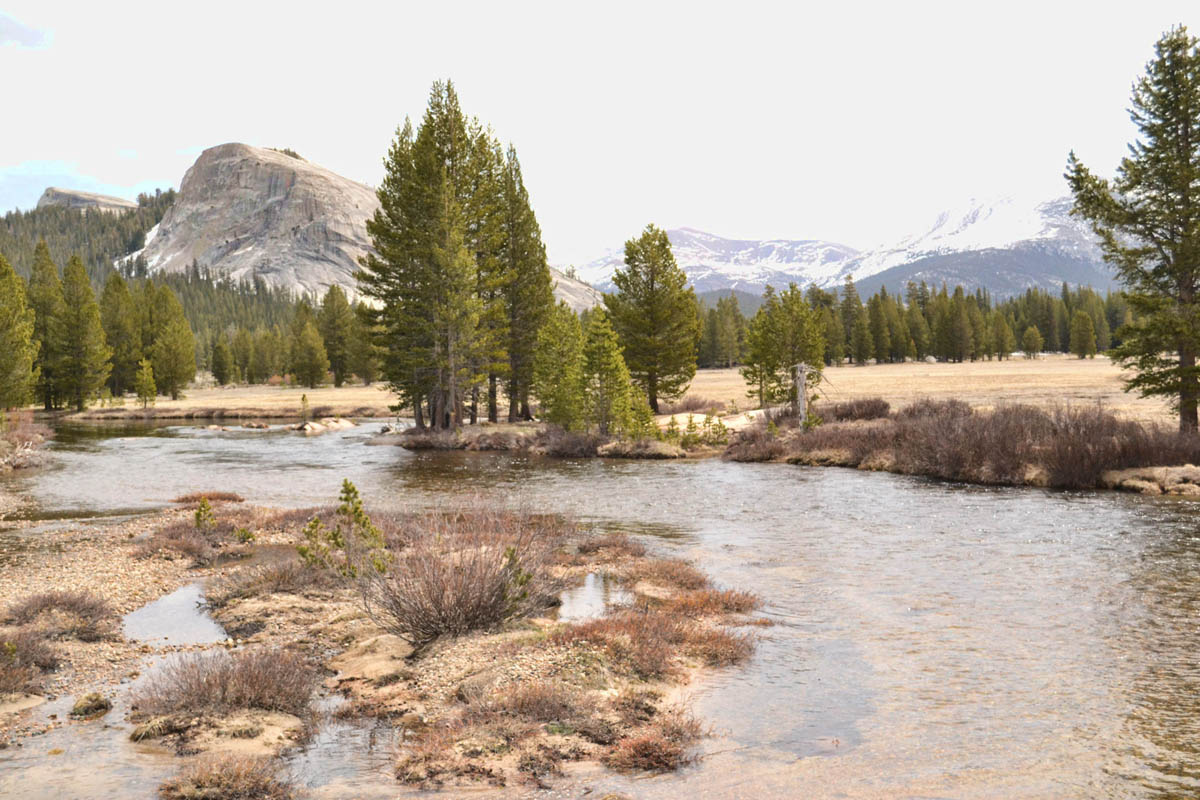 8 thoughts on “Suppose You Only Had Half a Day…”