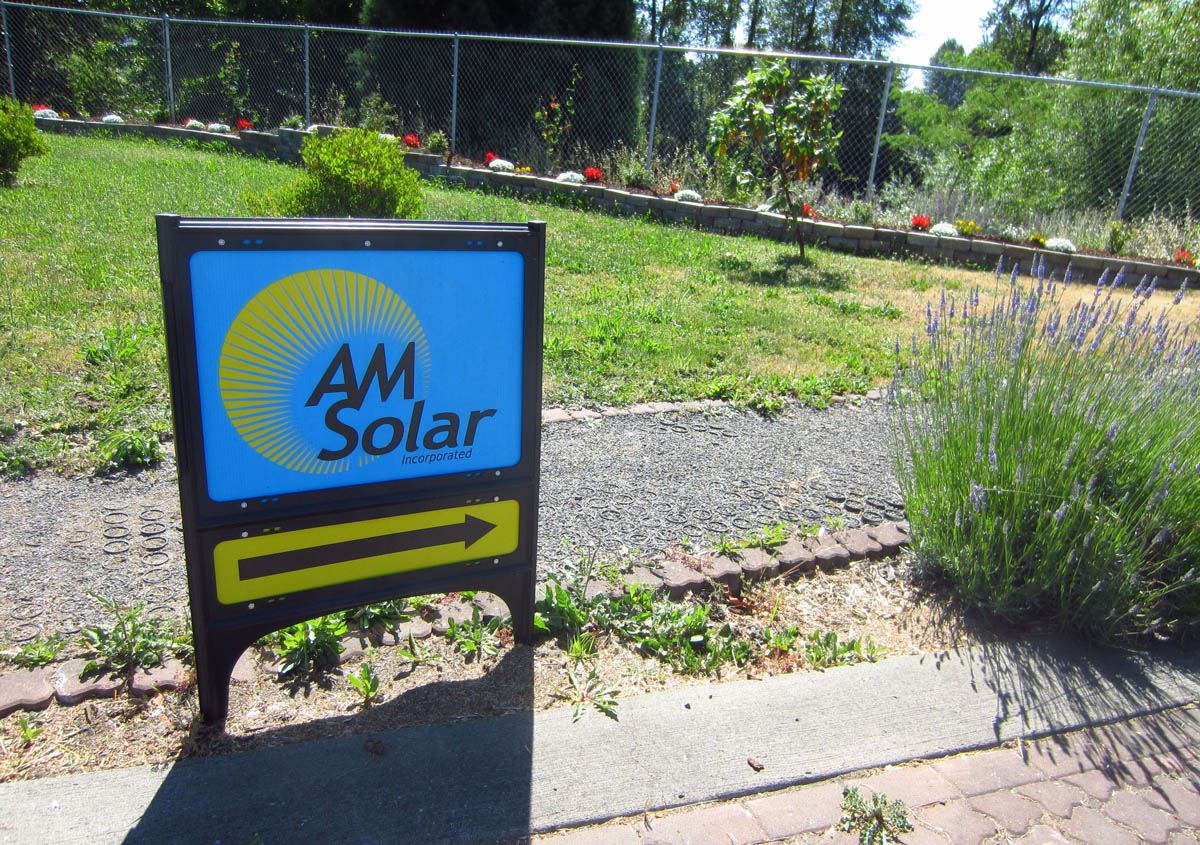 Anyone who knows me knows I don’t make large purchases easily.  For example, it took me almost two years to buy my rig, but once I found it, the honeymoon is still on.  The indecisive Libra in me makes me feel compelled to survey everyone I know and trust before I end up with what I feel is the best decision for me.  The knowledgeable, helpful, unflappable folks at AM Solar got a taste of my MO this past week as I vacillated on solar options like a shifting cloud cover on a springtime day.

When I first heard last winter that AM Solar would be presenting at the Canyonville Rally, I called to make an appointment for the install, but got scared off by “sticker shock.”  I had heard stories of people in the desert, whether it be Quartzite, Slab City, or Yuma, who would install at half the price.  So I decided against scheduling AM Solar for the job.  At the time, my intent was to make the Skinnie Winnie rally in Quartzite, so I had plans to find an installer there.   But plans got delayed, and I reached the desert long after the installers had migrated north for the summer.

I continued to affirm that I would find myself in the right place at the right time, until I ended up in AM Solar’s back yard, still with no panels.  Not only that, but I was down to only being able to run my work equipment for about three hours on my current batteries before having to start the dreaded generator.  I had to do something soon. 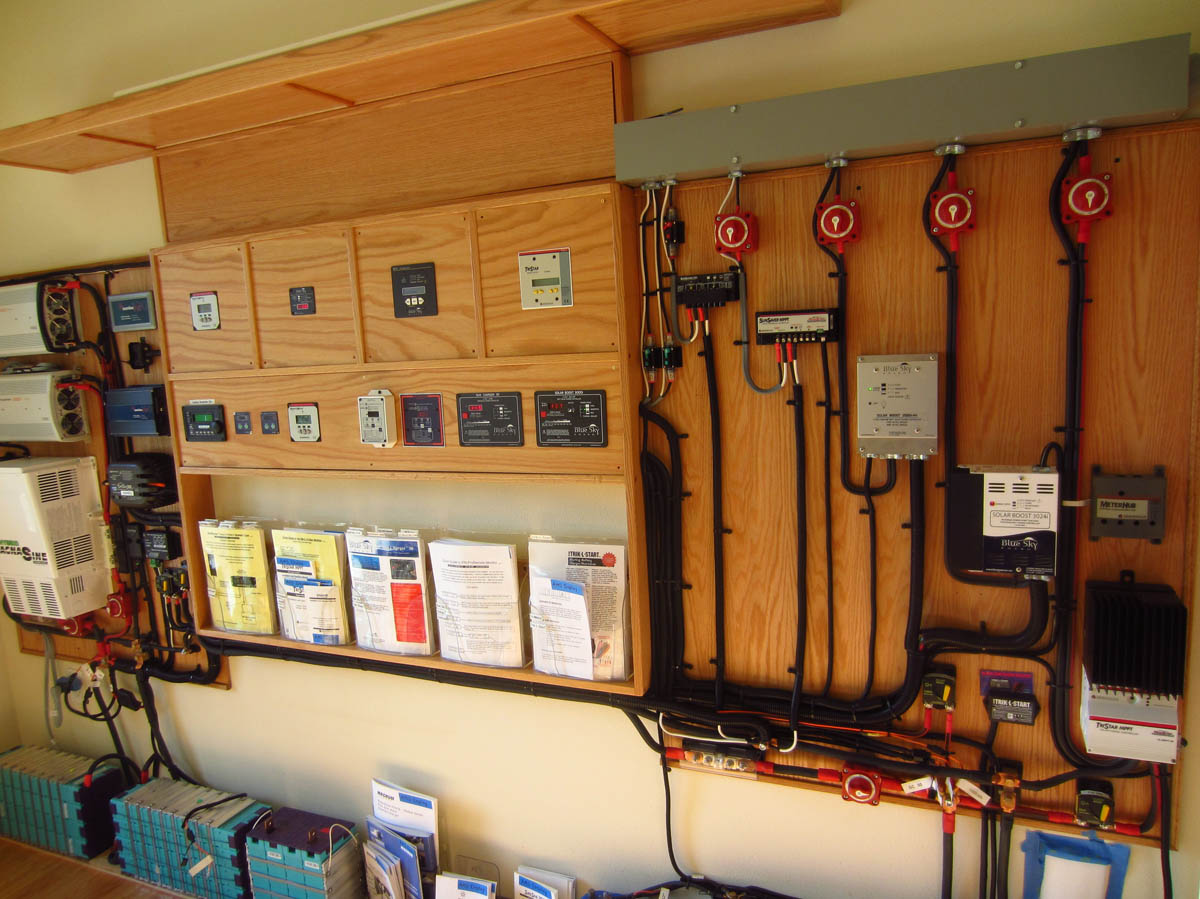 Greg and his wife Debbie, the AM Solar owners, came down to the Canyonville Skinnie Winnie Rally, and brought with them all the components required for solar installation.  Greg went piece by piece, explaining how yes, they are the same panels, but here is how their set-ups differ.   He painstakingly explained each part that had been custom ordered or designed, from marine grade wiring to flexible mounts to scalable boxes on the roof making it easy to add more watts down the road.   So I left the rally once again, as my friend Lynne teased, “Drinking the Kool-Aid!”

But AM Solar’s kits came so highly endorsed by bloggers who have become friends over the years.  I knew after Greg’s presentation, I wanted to go with an AM Solar kit.   All I needed was an installer.   I have the best there is built in to my own family, but my Einstein of a brother is headed to his own “happy place” in Mexico for the summer.  Who knows how long it will be before Don, the Winnie, and I will all three be in the same place at the same time again?

So I called AM Solar back, and asked for a “consultation appointment” with the intent to see if they had a system that would fit my budget.   This was going to be one of my infamous “one-toe-in-the-water-at-a-time” processes if there ever was one. 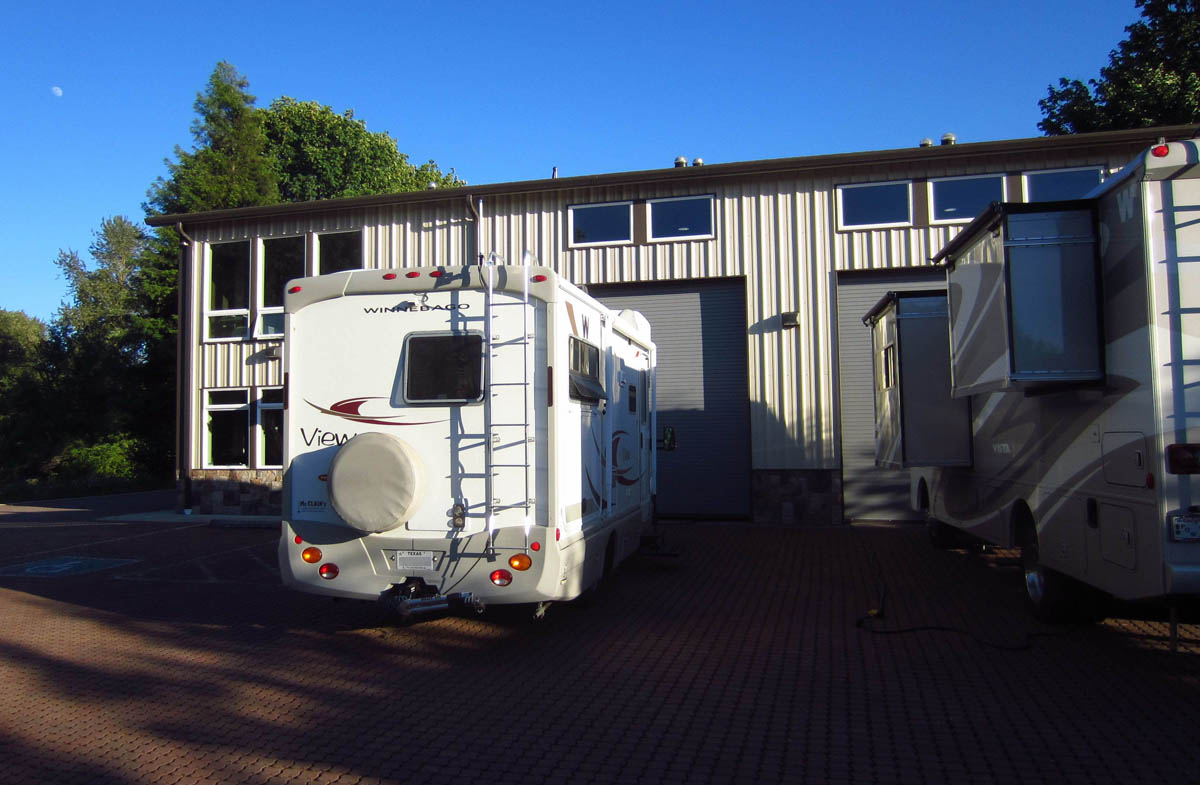 Hooked up in the driveway…

I was “invited” to overnight in AM Solar’s driveway the night before my 8:00am appointment.  I arrived a bit early, so I was introduced to “Marv,” who would be assessing my needs, my lifestyle, making recommendations, and overseeing the install.   Although the sign on the door said we were 15 minutes until closing time, Marv spent an extra hour, sitting in my rig, assessing my use and abuse of power.  😉

As I turned in for the night, I was still not quite committed to my decision.   I am not cheap, but I am frugal, and I knew there were less expensive options.   So I thought, “Let me go on Nina and Paul’s blog, and see who did their solar…they are the ‘go-to’ source for RV Boondockers, and I have come to trust their advice.”   Well, there on the Wheelinit blog was a picture of “Marvelous Marvin!”  My installer!  It was a sign!  LOL!! 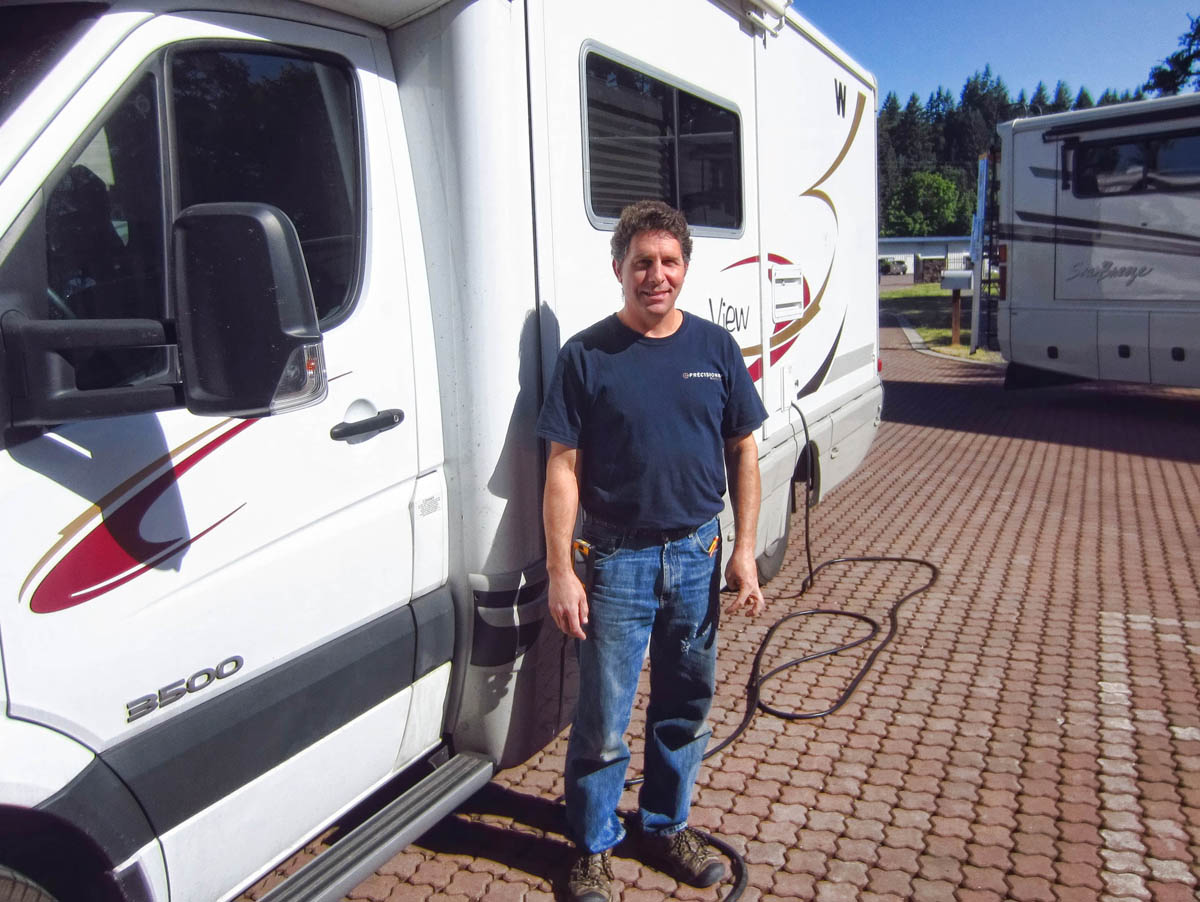 Marv was patient, thorough, and an excellent listener.  But most importantly, he made me feel assured that I was making the right decision to support my lifestyle.  He came across very seriously, but had a sly side as well.  I laughed as we were standing in the rig, and I voiced the concern on every RV owner’s mind, “Where are you going to drill the hole in my roof?”   As we stood beneath the open 12″ X 18″ skylight overhead, Marv looked upward, smiled, and said, “Don’t worry.  Manufactures put all kinds of holes in the roof.” 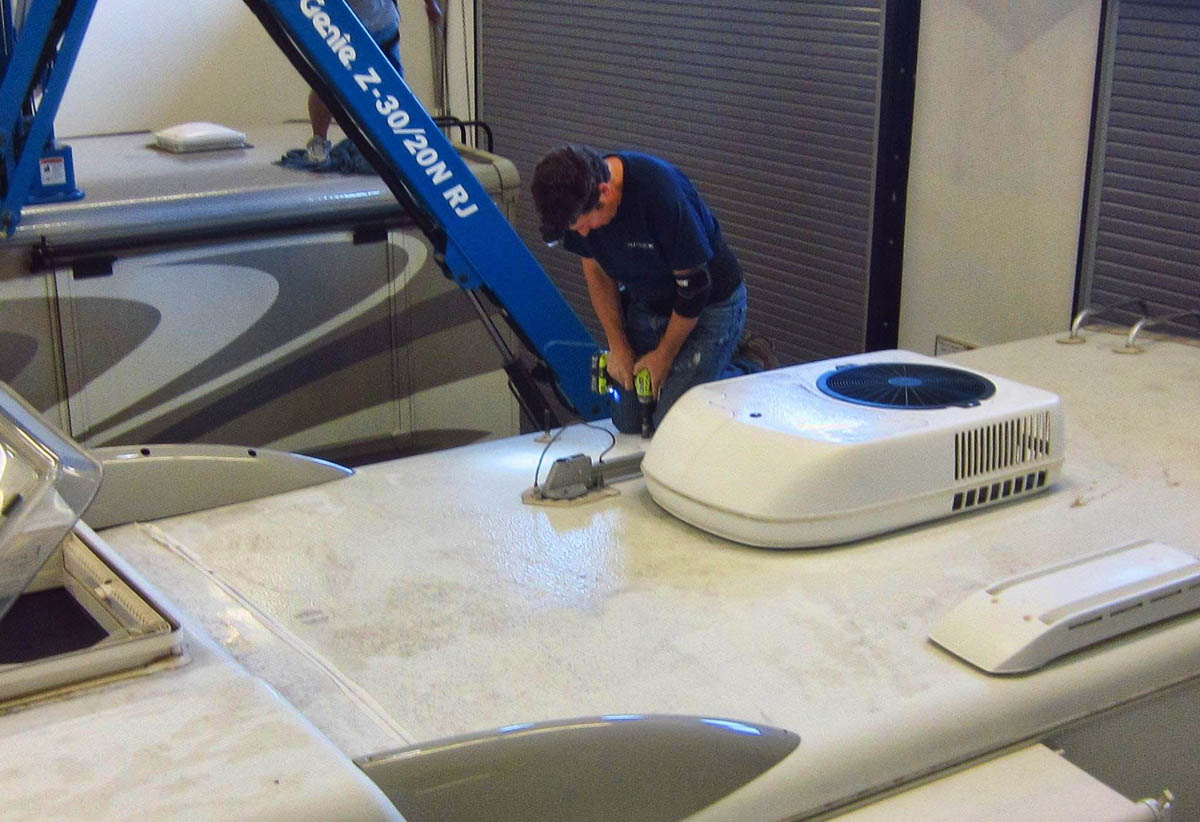 Marv unceremoniously drilling the hole in the roof.

I have never been treated so well as I was by these guys.   From the waiting room full of RV books and magazines to the shelves of local maps to menus, and even a stash of chocolate in the fridge, I was made to feel at home. 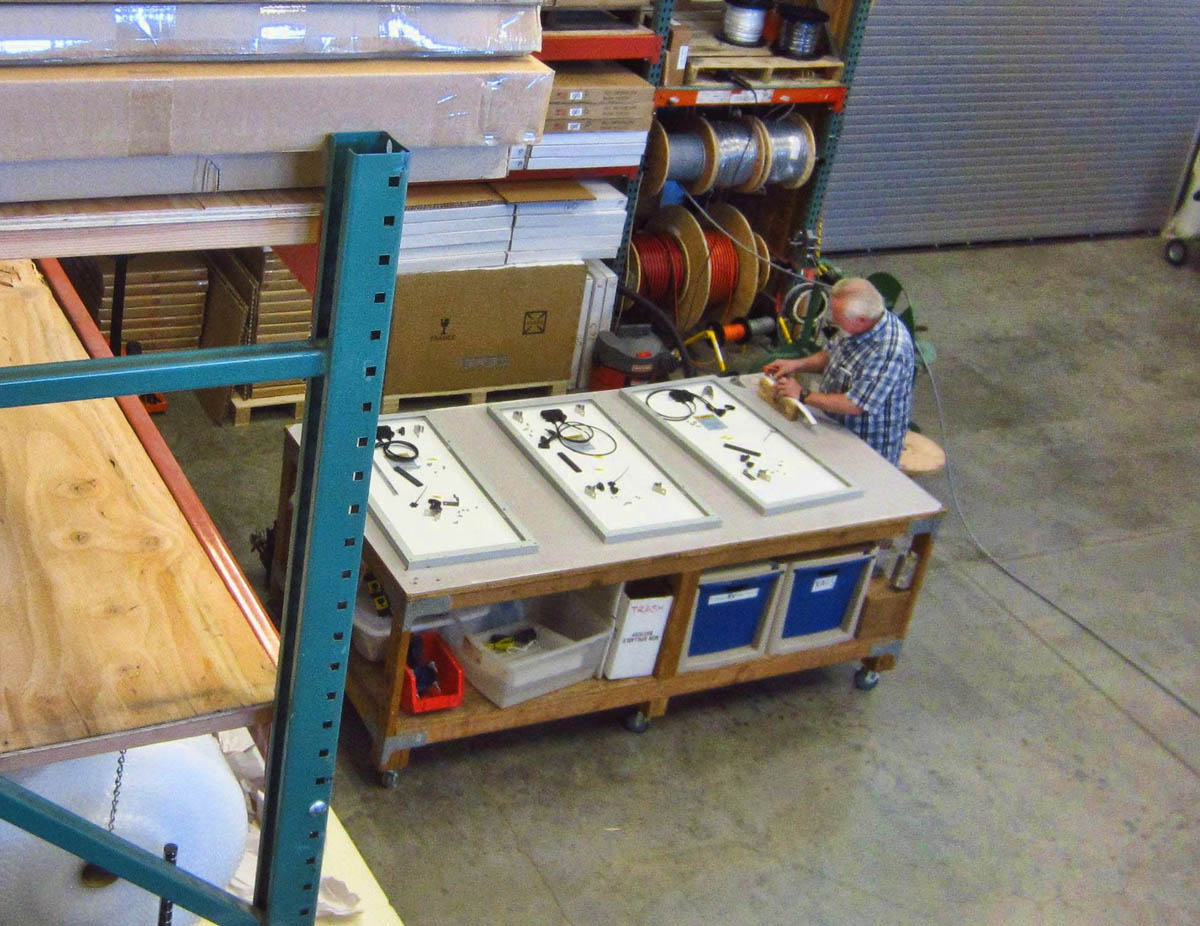 But by far, my favorite part was the upstairs viewing window where I could go whenever I wanted and stay as long as I wanted to watch the install taking place below.   Their work space is so immaculate, instead of worrying that someone would track dirt into my rolling home, it was just the opposite. 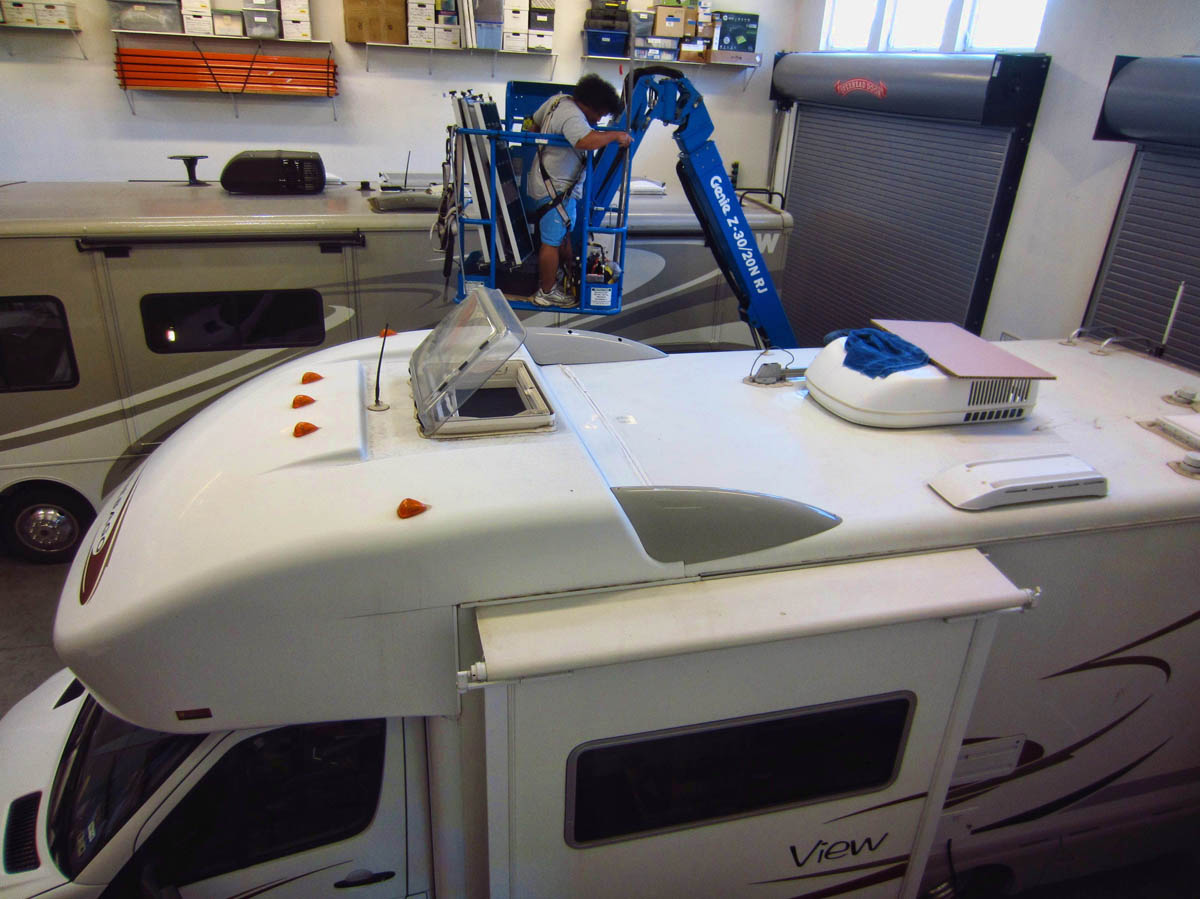 “Before” — my panels coming over on the forklift. 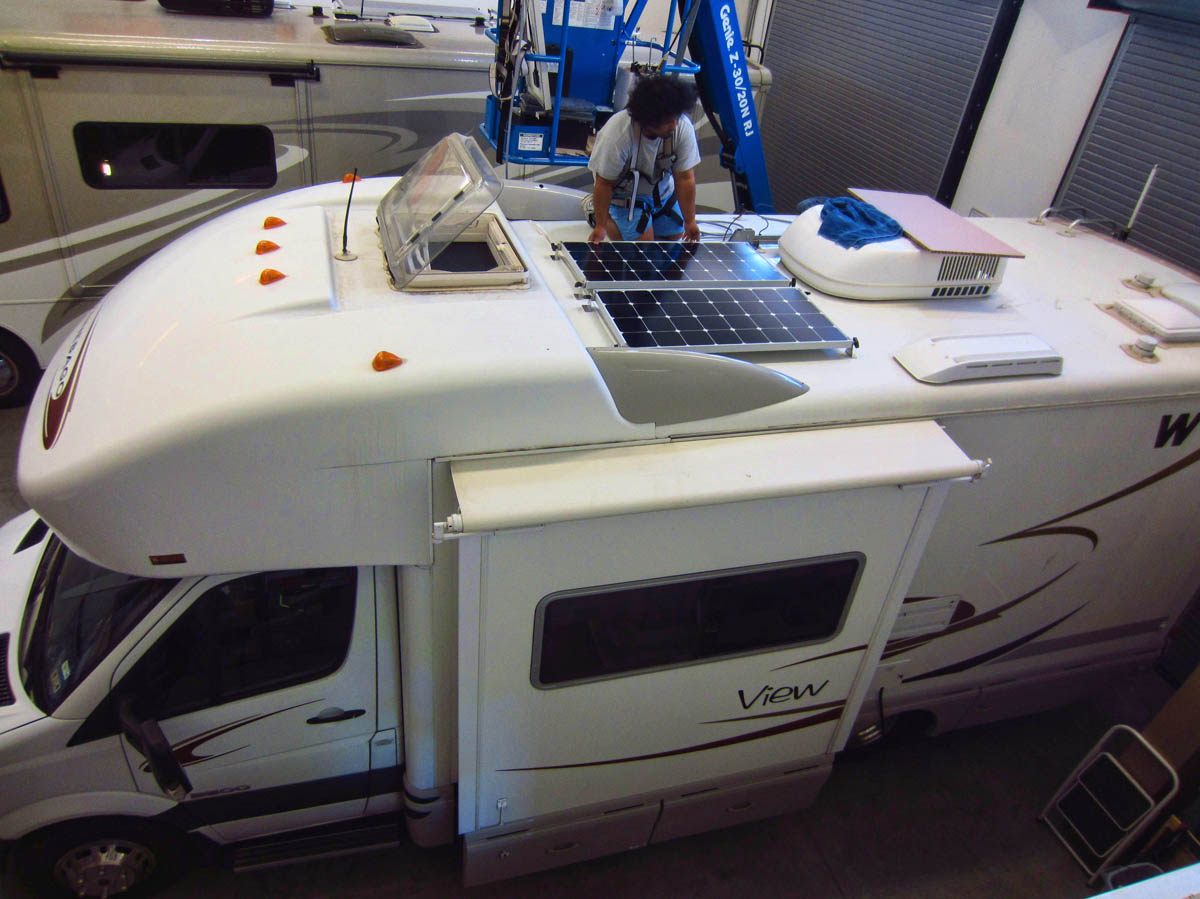 Our Views don’t have as much “real estate” as larger rigs. Any more than three panels, and the TV Antenna must be swapped out for smaller type. 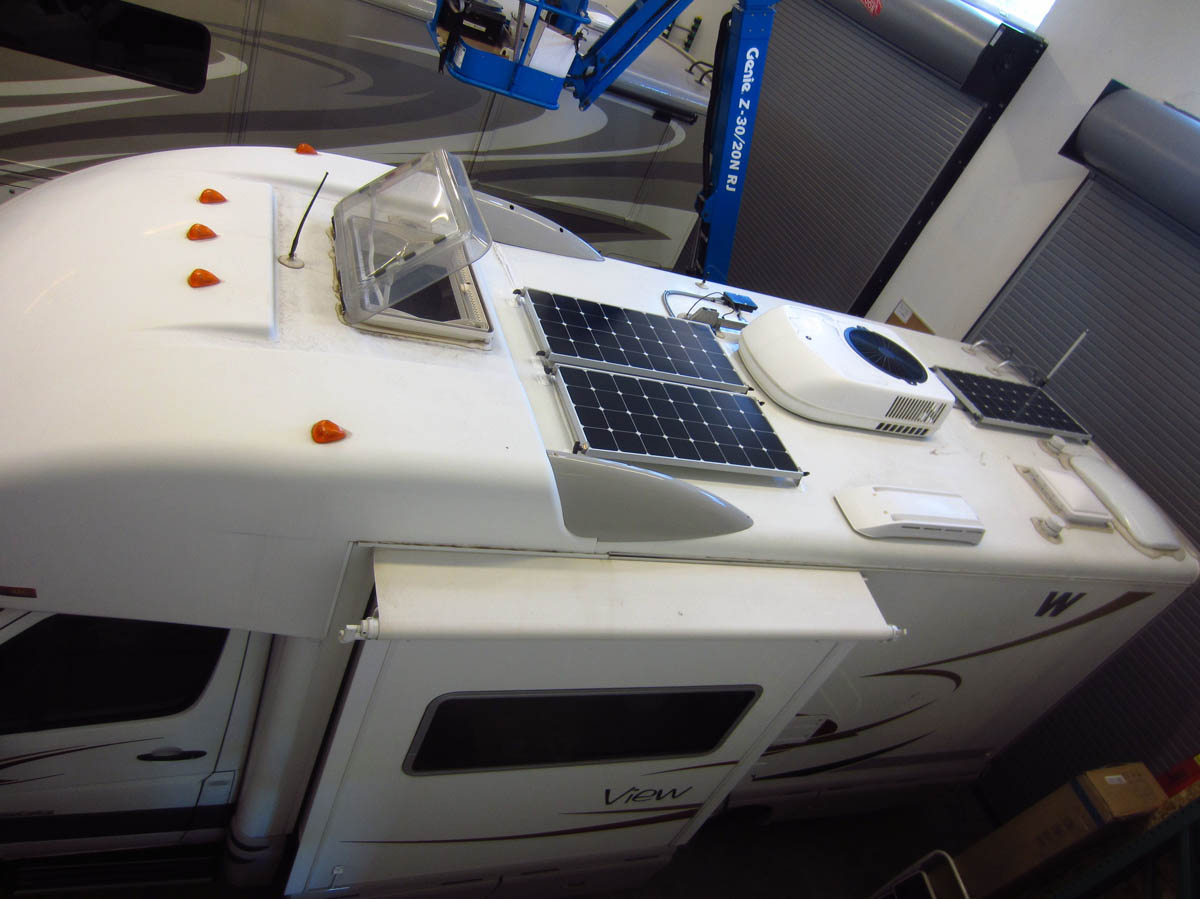 Marv and the team were competent and confident, and helped impart the same on me.  Marv spent at least an hour helping me understand how to operate my system, and get the most out of my new found freedom from the pole. 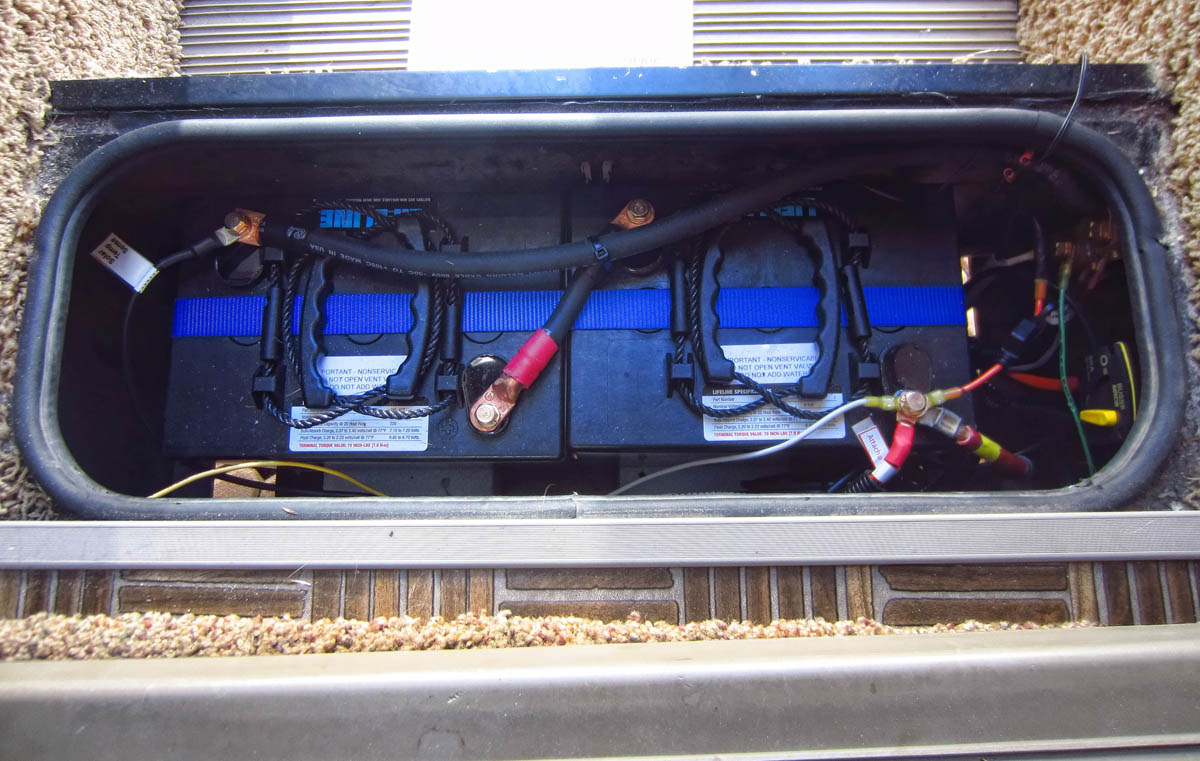 Believe it or not, I am actually having fun watching the numbers fluctuate on my Controller Remote panel.  Just as I find it a thrill harnessing the wind for power on a sailboat, I am finding the same thrill harnessing the sun.   Already, I am enjoying the benefit, as I feel so much more relaxed no longer having to keep one eye on the battery monitor and count the remaining minutes left on my two draining laptop batteries.  I haven’t been plugged in since I left AM Solar’s driveway six days ago, and haven’t yet dropped below 88%.

This opens up a whole new chapter…

“Tomorrow may rain so…I’ll follow the sun.”  ~ Lennon and McCartney

18 thoughts on “Heading Inland to Catch a Little Sun…”