I consider the hike to Grinnell Glacier to be the pinnacle of my Glacier National Park vacation, and the only part on which I have actually done research.   I have been looking forward to this day for months.

As I mentioned in an earlier post, there were 150 glaciers when the park opened in 1910, and now there are only 25 remaining.  Scientists expect by 2030, there will be none, at the current rate.   So I really want the chance to hike up to the foot of the glacier, stand and contemplate the evolution of our species.   😉   The hike to Grinnell Glacier will give me a look at two glaciers up close – Grinnell and Salamander. 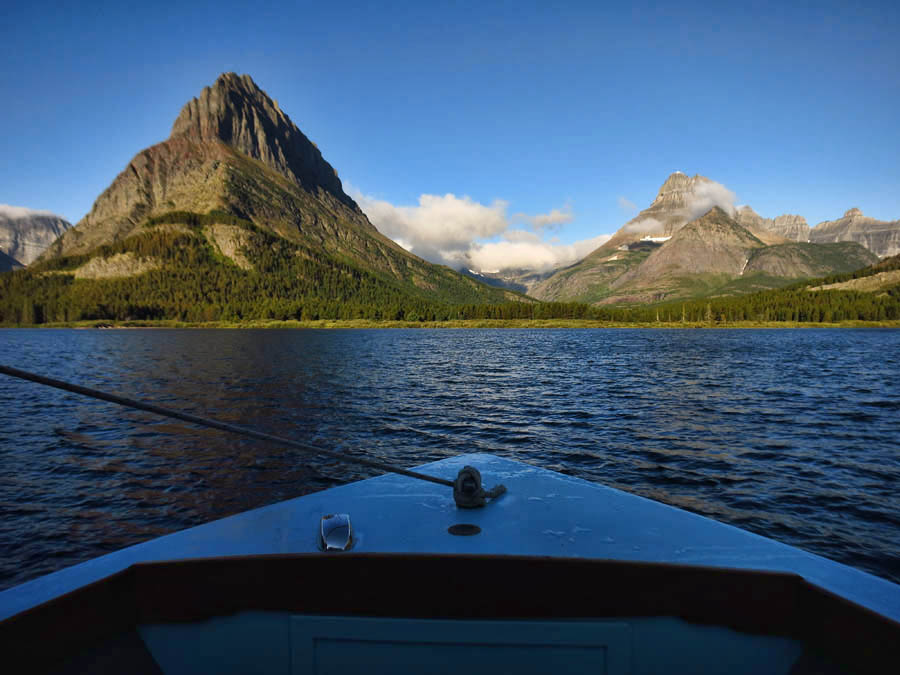 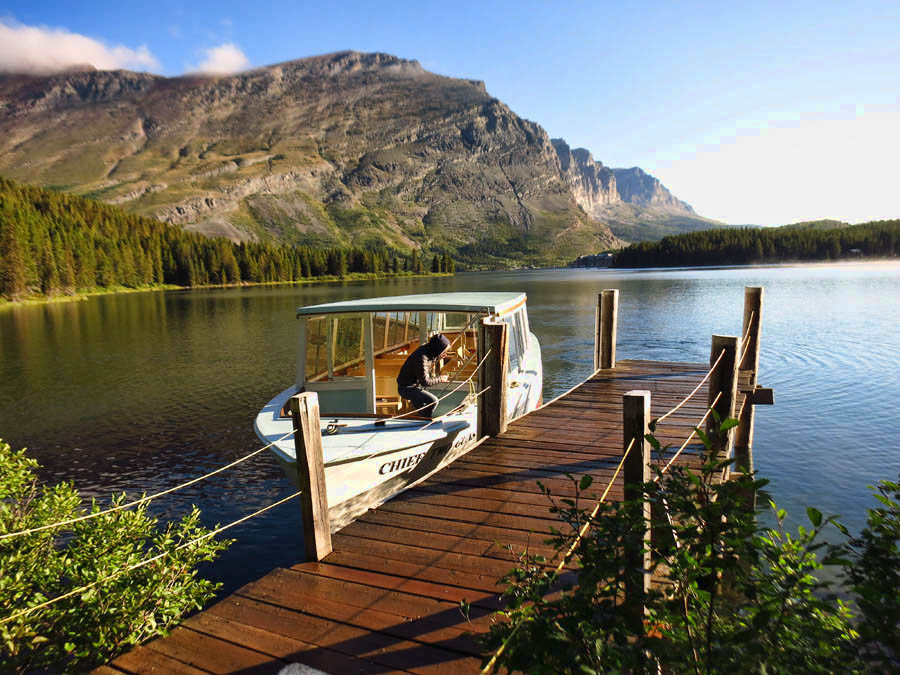 Grinnell Glacier is named for George Bird Grinnell, a conservationist, explorer, and founder of the National Audubon Society.   He spent many years exploring the park and was a major contributor toward the establishing of the park.  He was befriended by the Blackfeet tribe, and led an initiative to save the buffalo, among many other species. 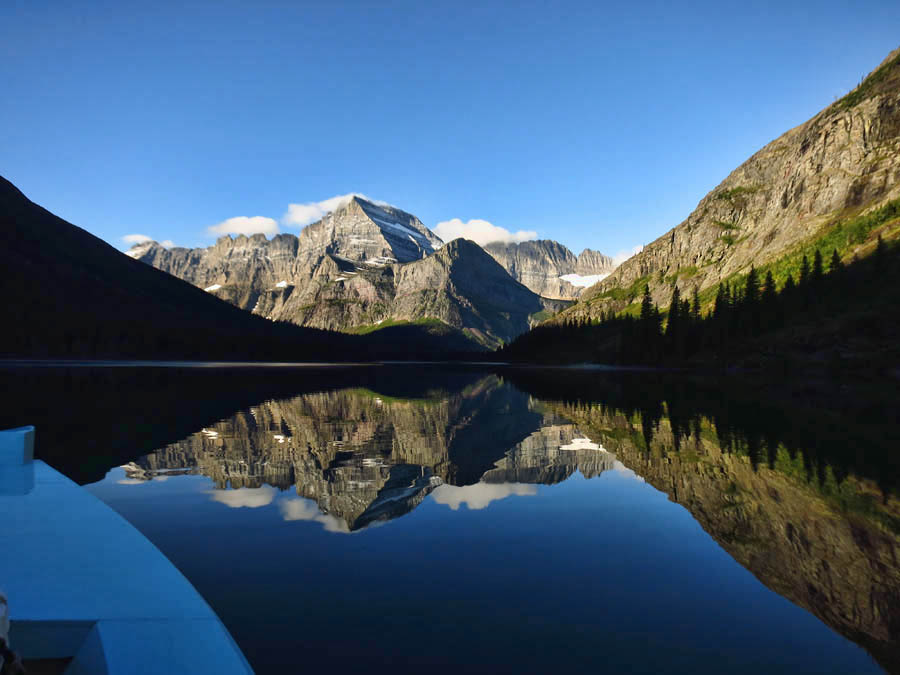 And Salamander Glacier was named for…..well….it looks more like a Dachshund to me. 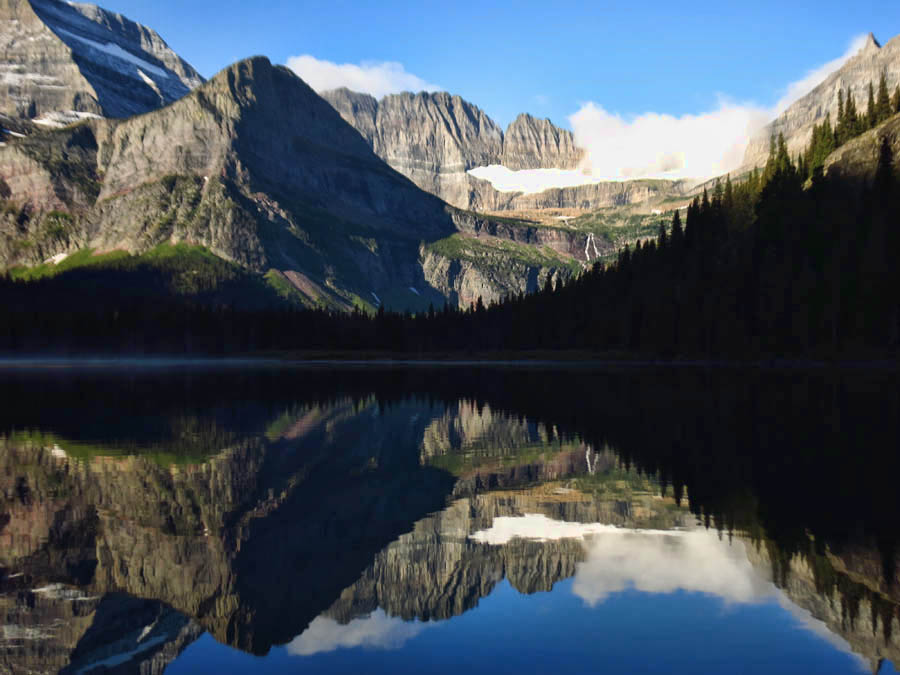 View of Salamander Glacier, looks more like a Dachshund to me.

The Grinnell Glacier hike can either be done all on foot (eleven miles round trip) or it is possible to shave off four miles with the two-boat tour.   One must pass both Swiftcurrent Lake and Lake Josephine along the way, so by taking the boat ride, it cuts four miles off the hike, making it 7.5 miles with a 1,600 ft elevation gain.

The boat tour crosses Swiftcurrent Lake on “Chief Two Guns”  with a ¼ mile trail over a mound of land that separates the two lakes.  Then board a second boat, “Morning Eagle” to continue on across Lake Josephine where the dock is located at the Grinnell Glacier trail head.   Not that I have any objection to hiking the entire eleven miles, of course!!   😉  But I enjoy a boat ride as much as I do a hike.   So I have booked this in advance, to insure my seat on the two-boat tour. 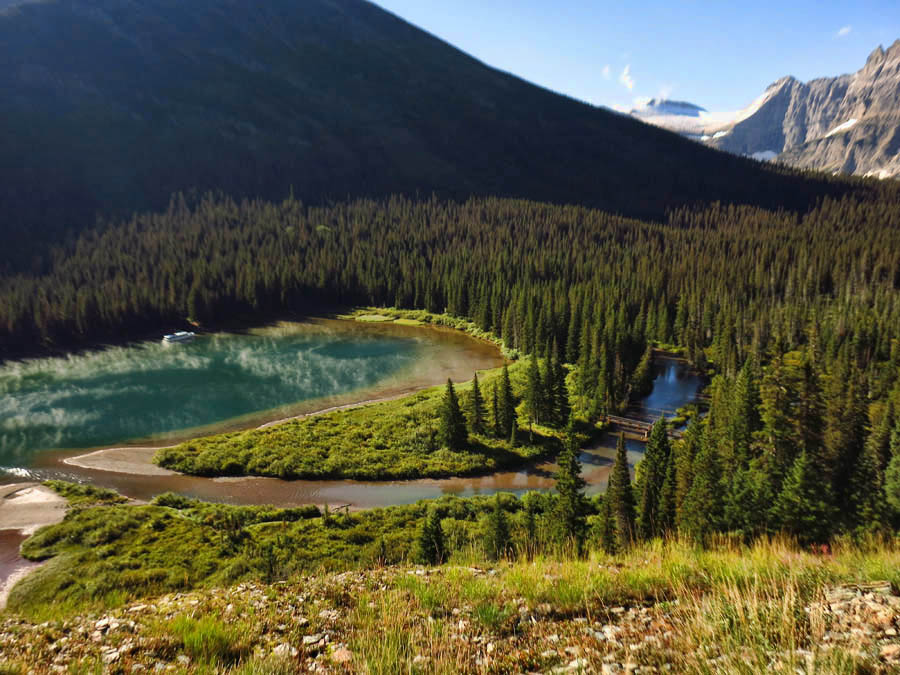 View of Lake Josephine boat dock, and bridge which is part of the boardwalk trail. Note early morning fog on the lake. 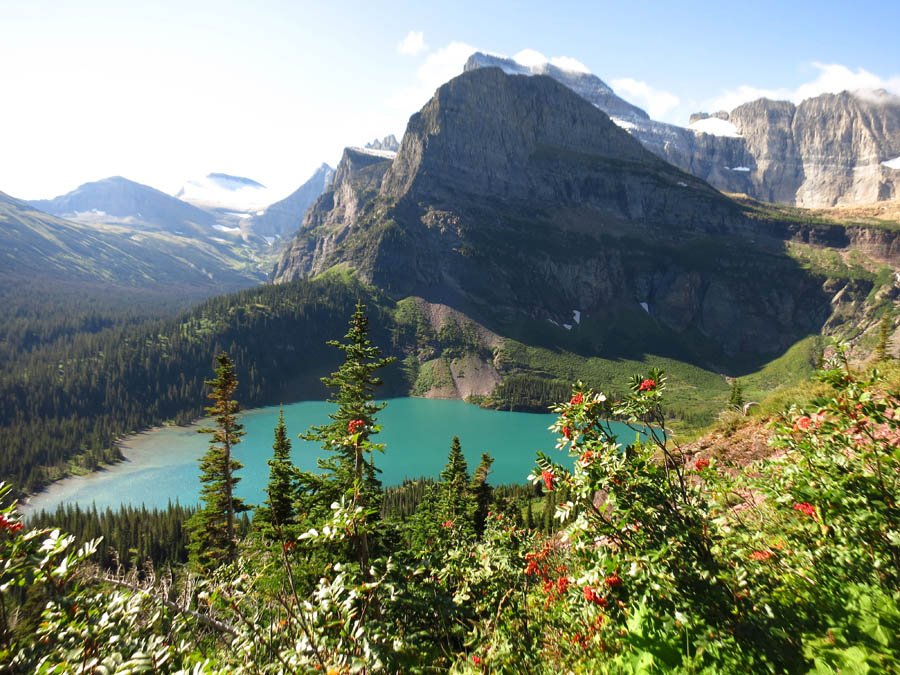 The tour schedule includes an early morning “express run” to the Grinnell Glacier trail head, which also features a guided hike with a ranger to the glacier.  Not typically being the “guided hike” sort, I sign up for this anyway.  One, because of the “Bear Fear Factor” where every sign seems to jump out at me warning,  “Don’t hike alone!”  Not that I would be alone on this hike, mind you.  Quite the contrary!   But I could not have known this back when I booked the boat tour.  The second reason was I really wanted the interpretive narration from the ranger in hopes of learning more about the glaciers. 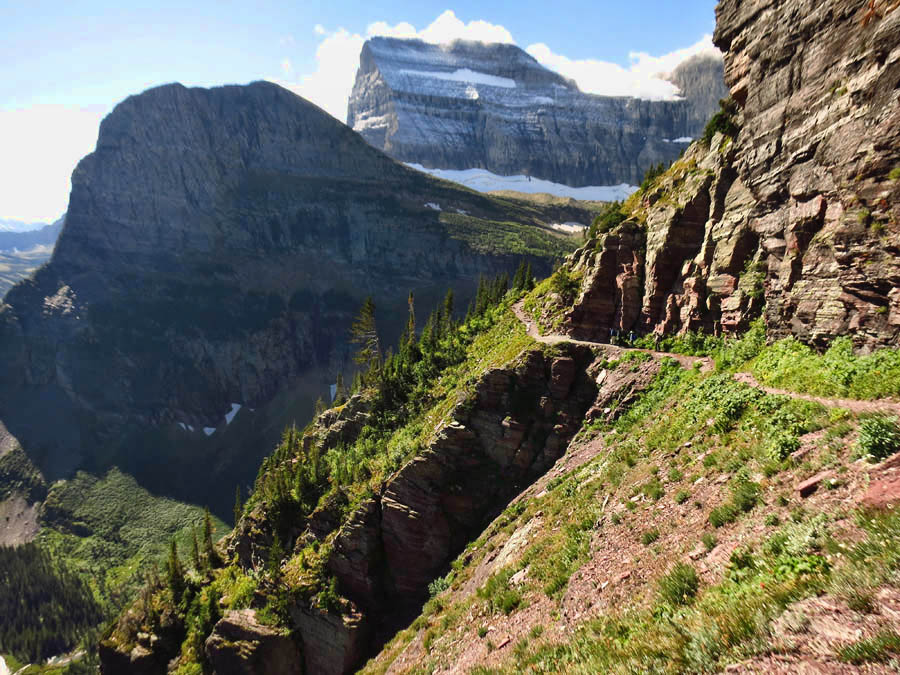 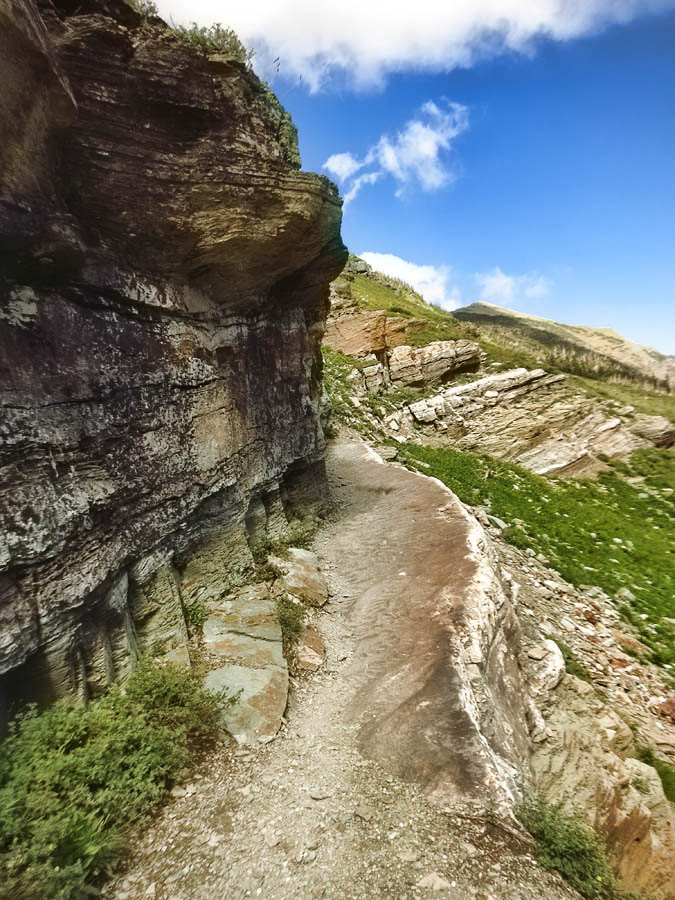 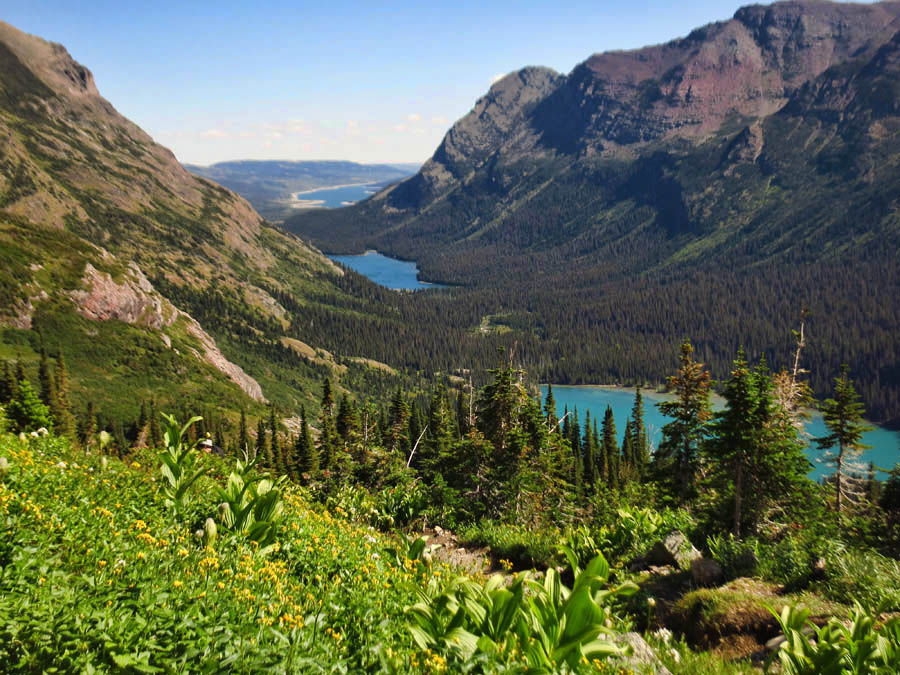 The hike starts out along an extensive length of boardwalk over a marshy area, before it begins the steep climb.  Our National Park Service guide, Rick, is a geology buff, so he tells us up front this hike will have a heavy geology theme.   We review the three different kinds of rock; sedimentary, metamorphic, and igneous, which brings back mind-numbing lectures from my school days.  This would no doubt lull us all to sleep if only we could catch our breath long enough after the lung-busting climb up the switchbacks.  Geology is not really my “thing” but I feign a whole lot of interest because I enjoy the rest stops.  😉 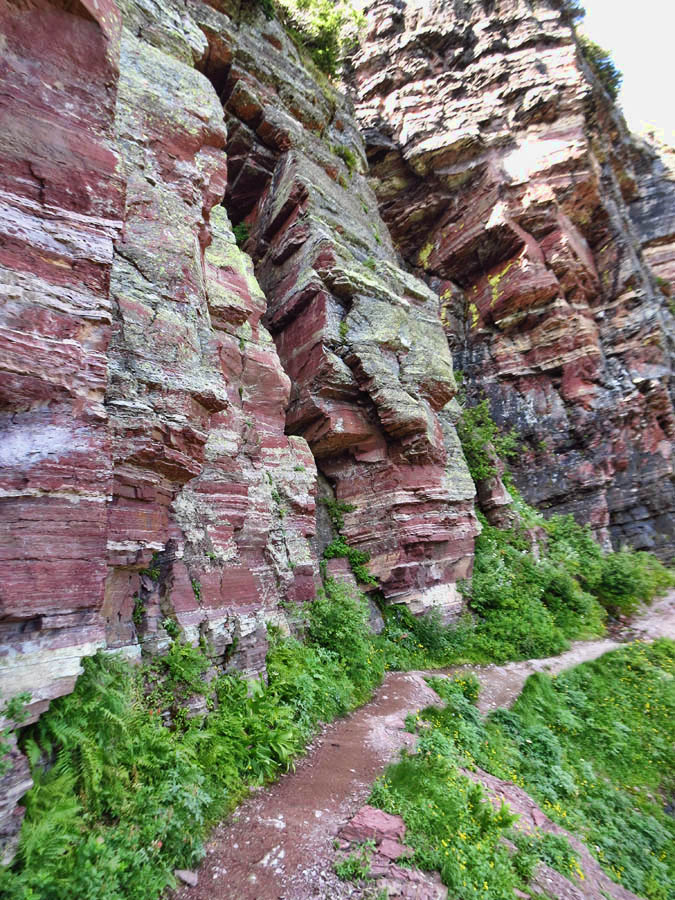 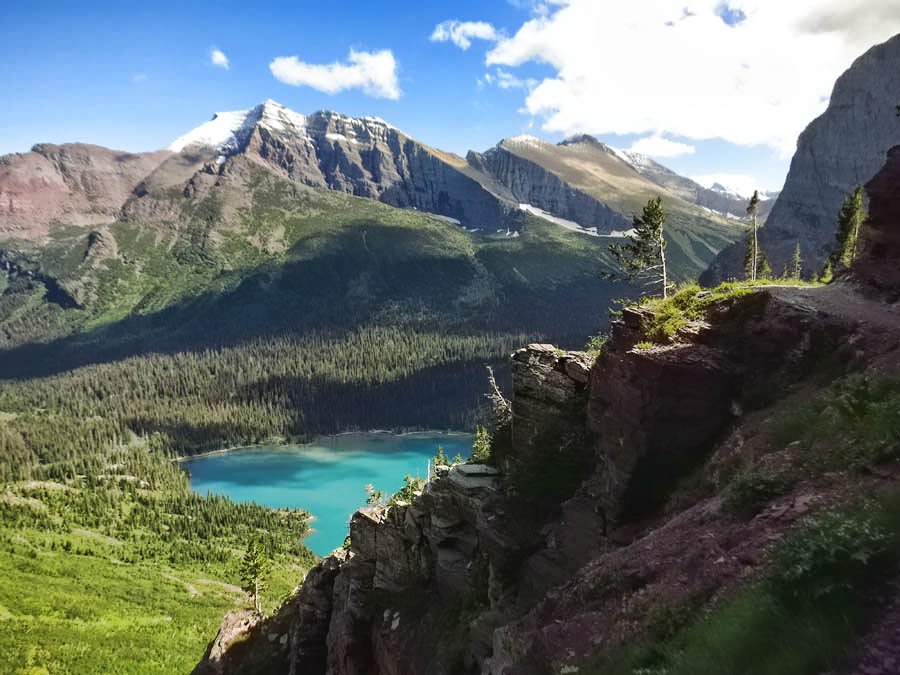 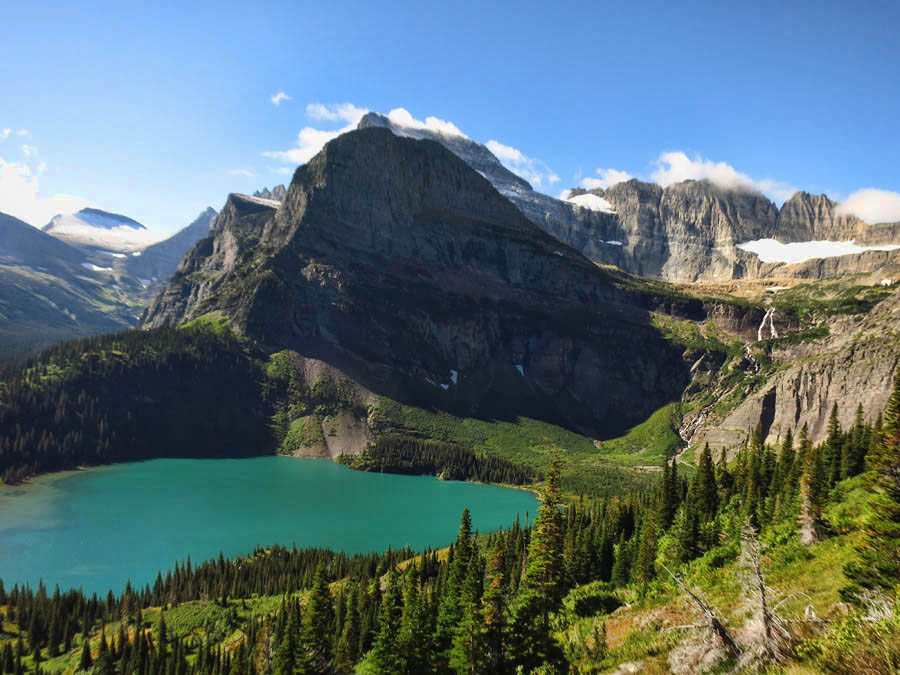 There are a ridiculous number of hikers on this guided hike, and I often think of breaking from the pack.  It’s a bit like a game of “whiplash” where the fast hikers race ahead, then wait for the slower ones to catch up, while those of us in the mid section collapse and expand like an accordion to hurry up and wait to hear the ranger talks.   Just about the time I decide I am going to break ranks and continue on my own, Rick tells us all that he has a foot ailment, and will not be able to make the entire hike.  So he will finish the narration midway up, and we will be free to complete the hike on our own, at our own pace.  YEAH!   My cake, and eat it too! 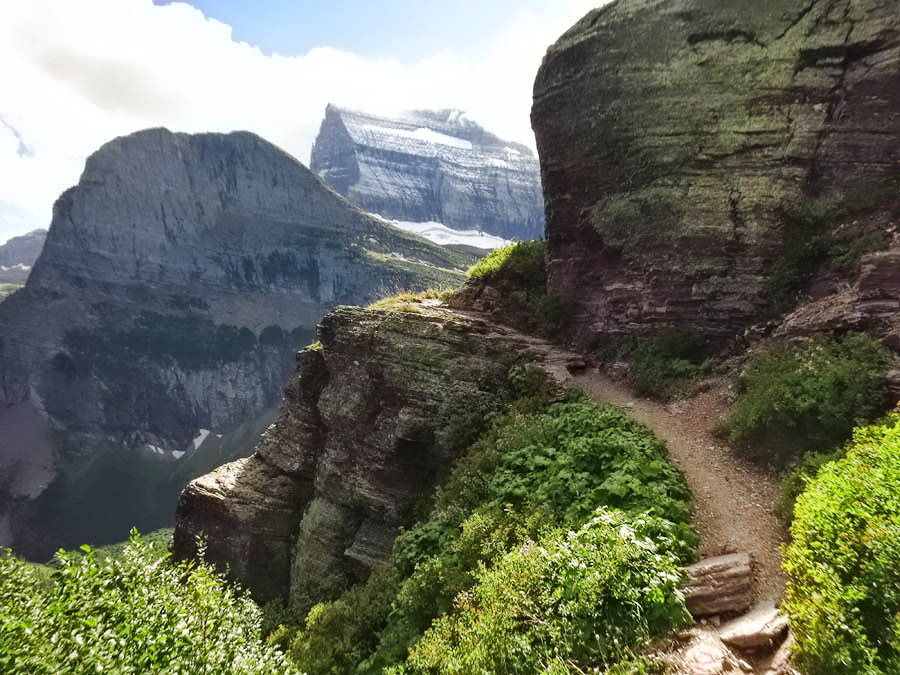 After the first third of the trail which is mostly climbing, the trail levels out a bit, but becomes quite narrow, most of it carved into the side of the mountain, or positioned on outcroppings.  There are a few small waterfalls to cross, and views of the stunning turquoise Grinnell Lake come into view.  At the furthest stretch of the narrow trail, it is possible to see three lakes in the distance, Grinnell Lake, Lake Josephine, and Lake SherberneReservoir (Swiftcurrent is around the corner out of view.) 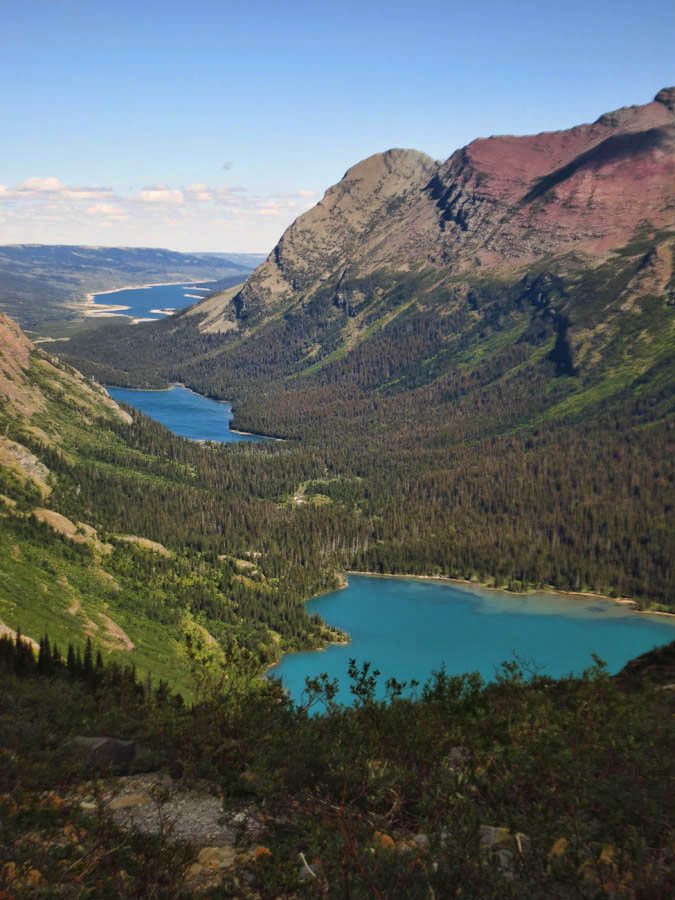 Finally when Rick reaches his limit, he gives the talk we have all been waiting for…the melting of the glaciers.  Back when Grinnell first explored the glacier in the late 1800’s, the glacier, then a combination of both Grinnell and Salamander,  was reported to be a thousand feet high and several miles across.  Now, an estimated 90% of the ice that Grinnell first saw is gone.  It has created its own melt water lake from the massive thawing.   Once it is gone, there is concern for a sustainable water source at this elevation.  Whether or not you believe Global Climate Change is induced by man, or merely by the natural warming and cooling cycles of our planet, there is no doubt it is having an impact on the park’s ecosystem. 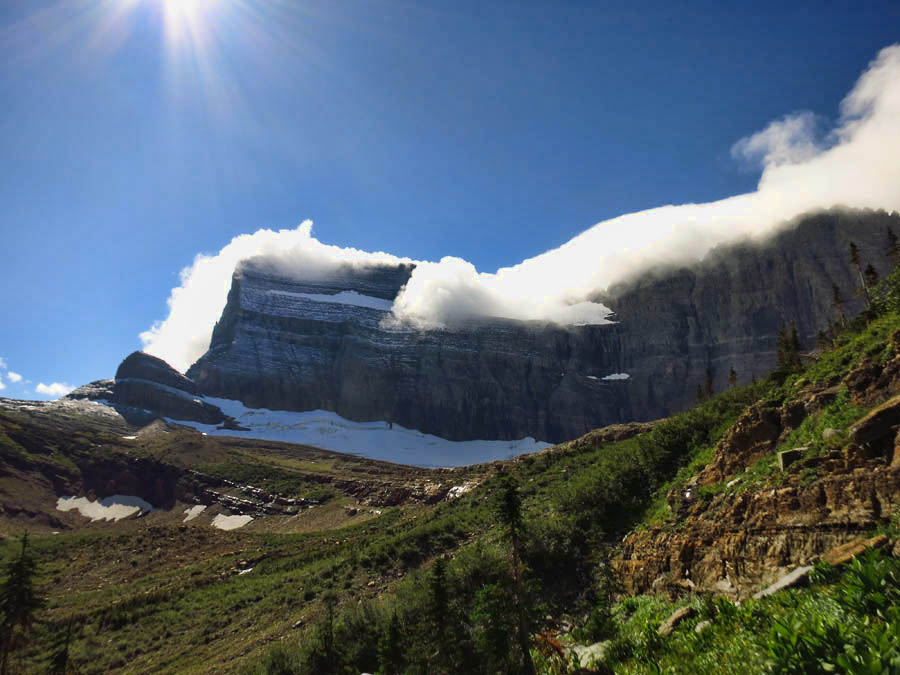 Closing in on Grinnell Glacier 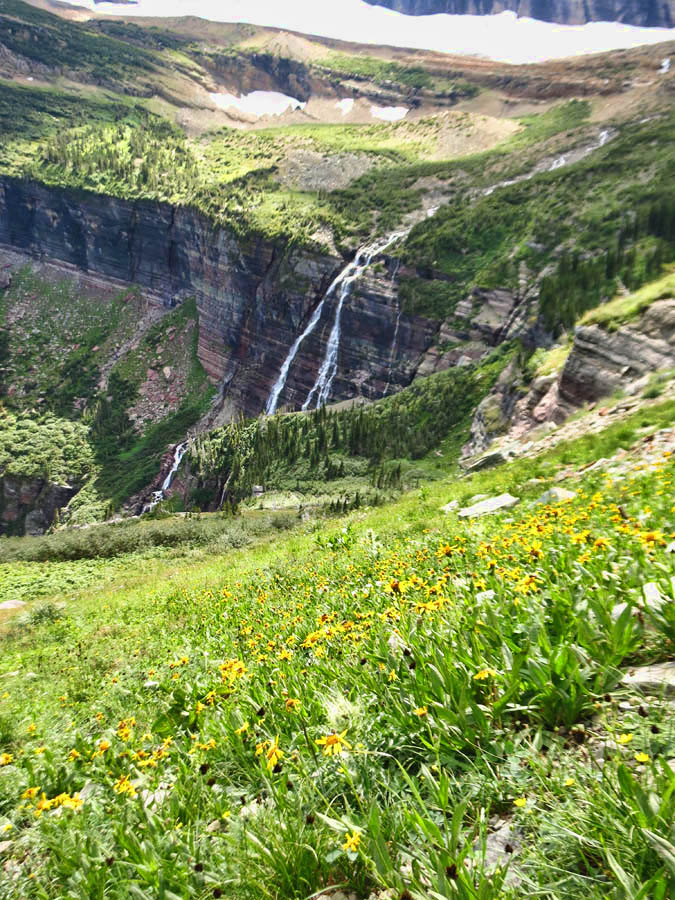 Before Rick turns us all loose, he tells us of a nice picnic area up ahead with benches and pit toilets.  “It’s a good stop to have a rest and regroup for the hardest part of the hike yet.  The final quarter mile to Upper Grinnell Lake is steep and rocky, but persevere.  Trust me, the views are worth it!”

Although I have done research on access to the hike via the boat tours and the trail itself, I have no idea what lies ahead at the end of the trail.  After making the final quarter of a mile climb up through the scree, I crest a large berm to get my first glimpse of Upper Grinnell Lake.   I let out what sounds like a combination of a gasp and a sob, as I had no idea I would be encountering an iceberg filled lake!   I am mesmerized! 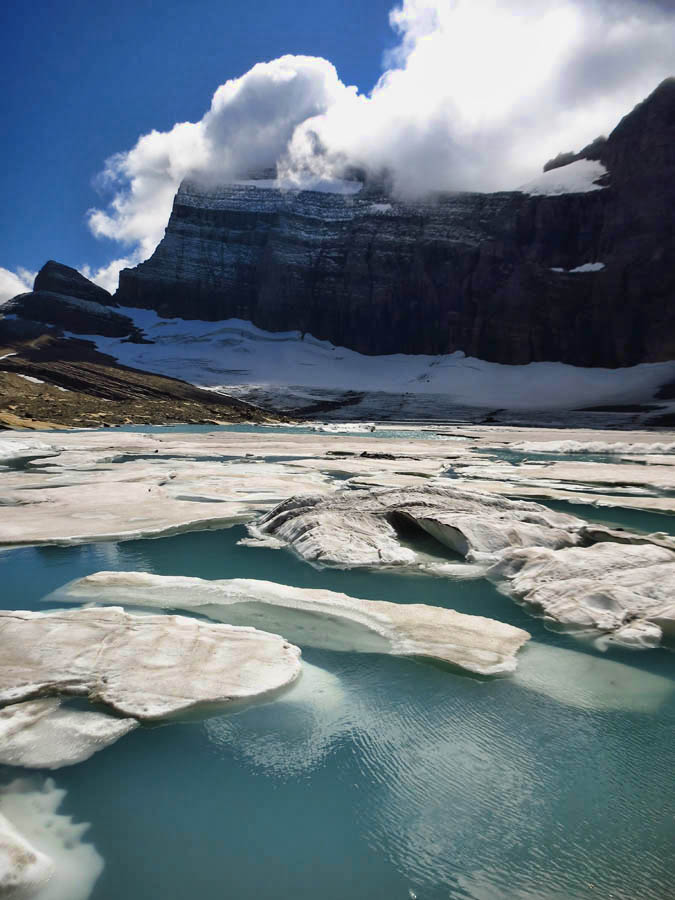 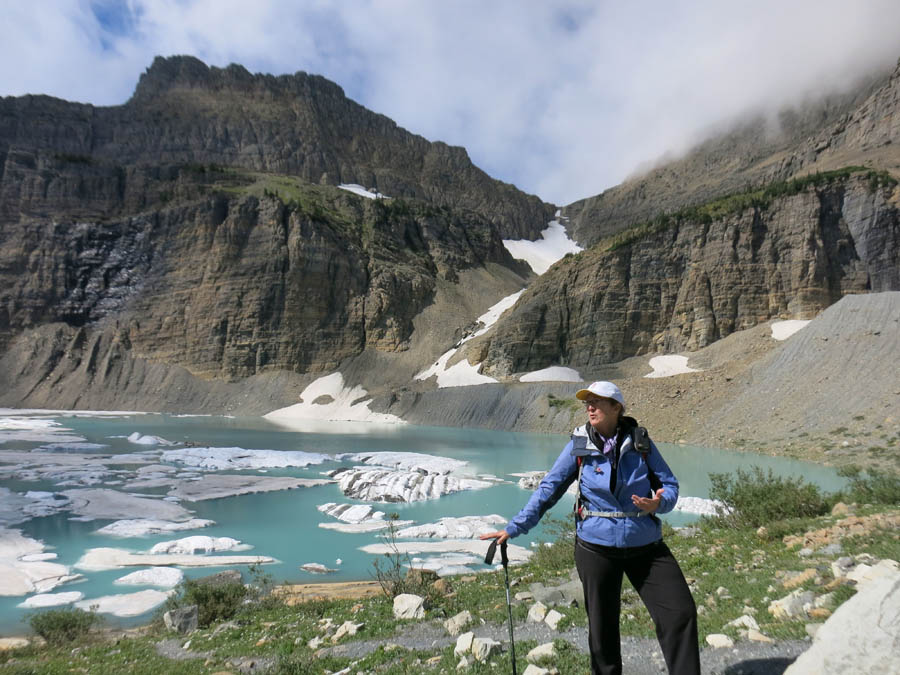 I ask another hiker wearing the Canadian flag as a hat to take my photo. I am busy directing, “The light may be better from that directio…” Too late.

I sit on a rock for a good hour, just staring into the shimmering ice-blue lake with the frozen chunks of ice floating, so still and beautifully sculpted by the elements.    I was so fortunate to visit Antarctica back in 2006.   Of all the indescribable things that I witnessed there, it was the ice formations that struck me as the most impressive, so this sight of the ice-filled Upper Grinnell Lake is a little flashback.

I have been hearing and reading a lot of debate lately as to whether our National Parks are really “worth it.”  The massive crowds, the entrance fees, the restrictive rules, the smoke-filled campgrounds, the stamp collectors, the bucket-listers, of which I am one.   As I sit here on this rock pondering the majesty of this place, I for one am extremely grateful for the NPS.  In fact, it is the only way I can justify the ridiculous amount of income tax that comes from my paycheck every two weeks.   I like to fool myself into imagining that my portion is going toward preservation of our National Parks.   Yes, there are a lot of people around.   Yes, I have to sidestep and yield to the occasional group of hikers along the trail.  But the payoff is so worth it!!  Call it a theme park if you like, but I will peacefully coexist among the “unwashed masses” to enjoy the beauty and splendor of such a “Magic Kingdom” place as this.   Can you imagine what Upper Grinnell Lake would look like if there were no NPS protecting it?   I would be staring down at the ice-blue lake from a 20 story hotel with a glass elevator overlooking fake icebergs floating in the poolside cocktails below.  I am taking the stand (on an iceburg, no less!) “Support our National Parks!!” 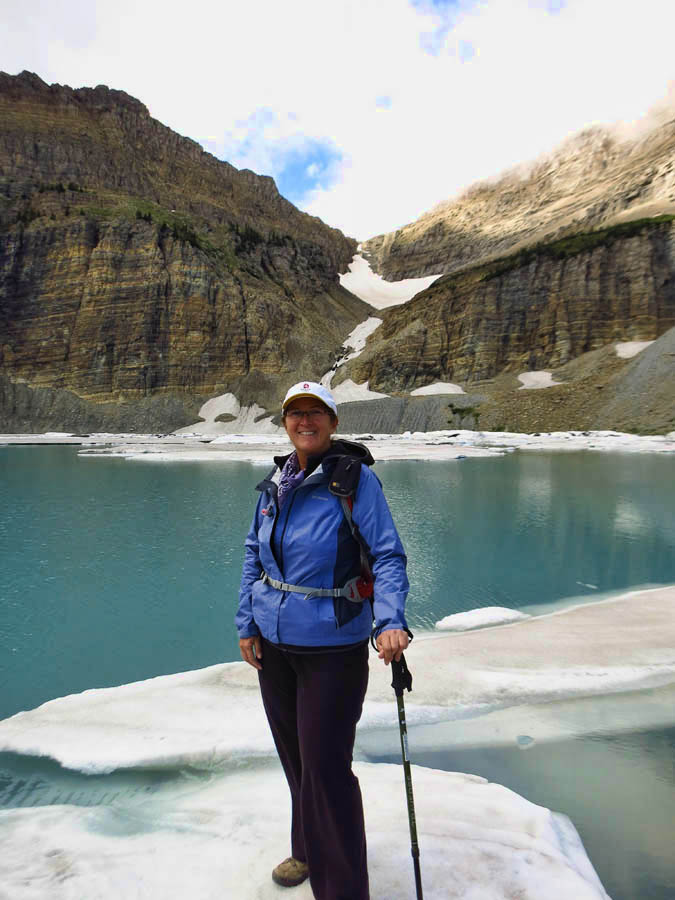 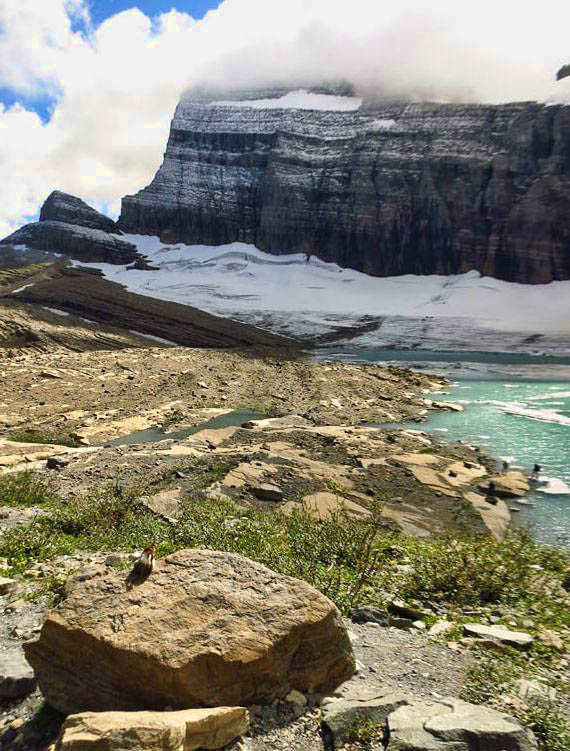 Note wildlife sighting on large rock..(smaller than a bread box, so it does not count.)

I make my way back down the mountain solo, stopping often for photos.  Rick has told us lower Grinnell Lake looks best in late afternoon sunlight, and he is right.  The western sun really makes the turquoise color pop. 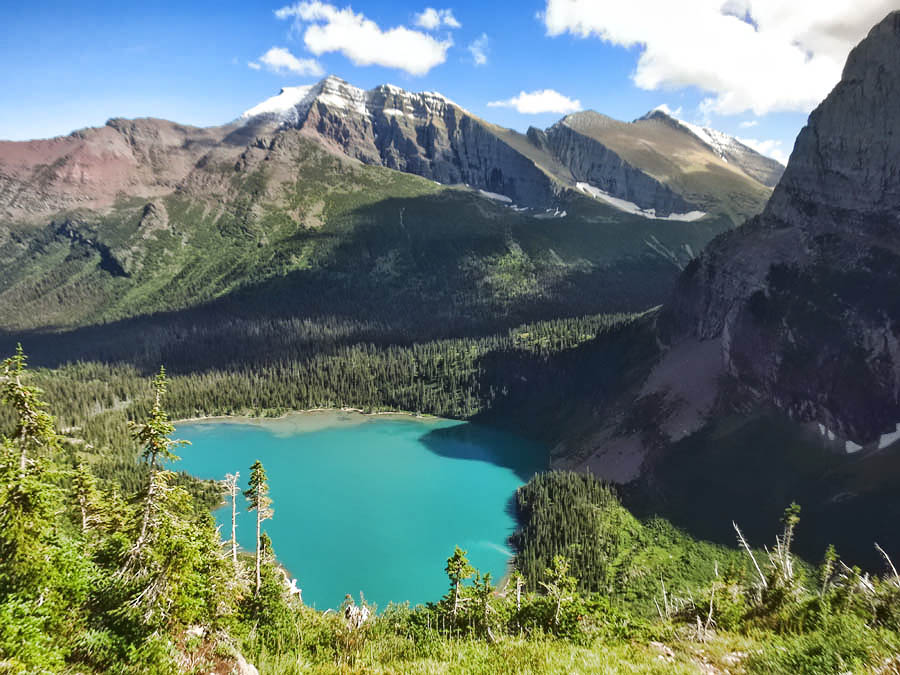 As I near the switchbacks, I come upon a group of people with telephoto lenses pointed up the mountain.   Sheep on shelves!   Three big horn sheep, all lying on their own rock shelf above.  I try zooming in with my point and shoot camera, but it can’t really figure out where to focus, as they are well camouflaged.  I just don’t have the right equipment to do them justice.   But still, I am counting them!  All three, bigger than a breadbox for sure! 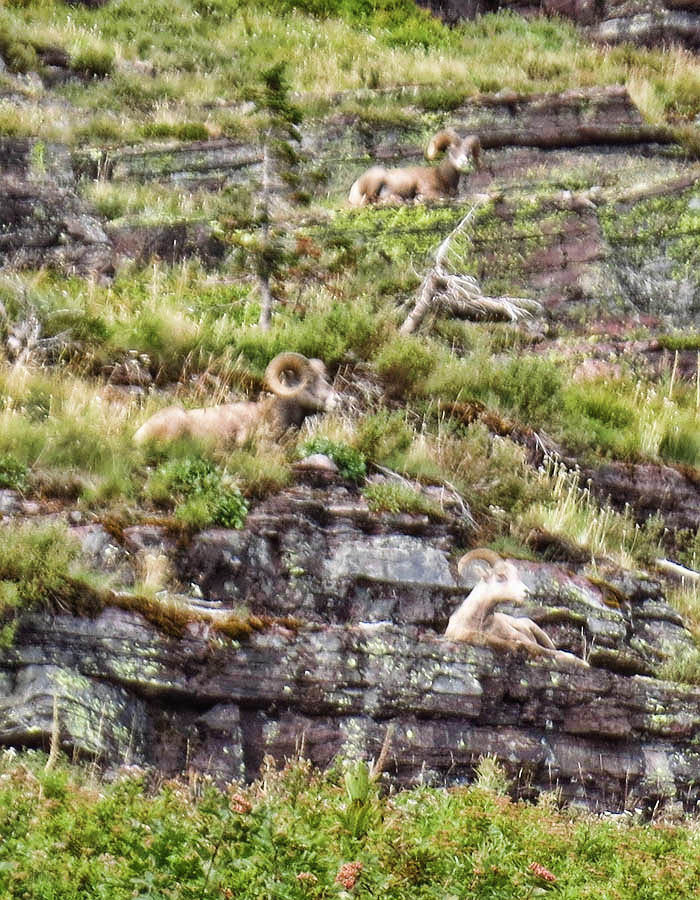 I fly back down the switchbacks to the shore of Lake Josephine, where a crowd waits for the next boat departure.  My ranger-led hike gives me a guaranteed spot on the boat, so I sit on the dock and relax, watching the golden setting sun cast shimmering glints across the lake.   “Morning Eagle” approaches to take me back on the final leg of my hike, home to the Many Glacier campground on such a perfect September day! 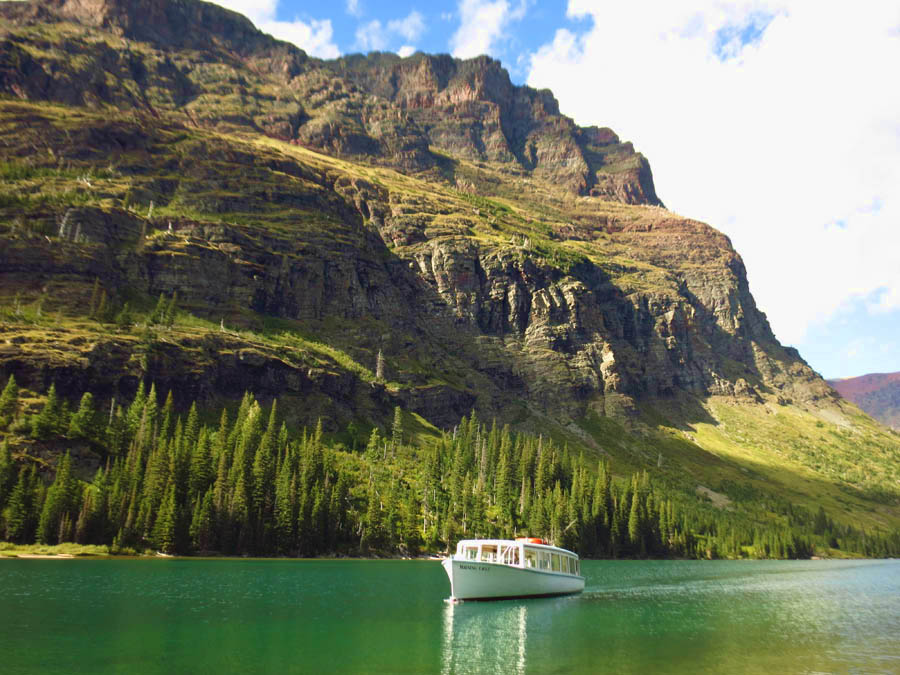