So now that I am fully acclimatized (said with a wink and a grin!) it is time to do the one hike that has been on my mind since discussions began last winter about a summer visit to Colorado. For three summers now, I have watched posts on the Box Canyon Blog about a place called “Ice Lake,” only accessible by foot. Year after year, I watch as Mark and Bobbie guide friends and family up to this most magical of places, while each year, Mark reminds us of what has apparently become his favorite eighties ear worm, “Ice, Ice, Baby!” I have watched Marathon Leonard jump in wearing only his blue skivvies. Watched the faces change in the selfies taken with Mark’s built-in-long-arm-selfie stick. Studied varying amounts of snow on the mountain backdrop. Looked longingly at close-ups of wildflower cameos, and vowed one day I’d get there too! 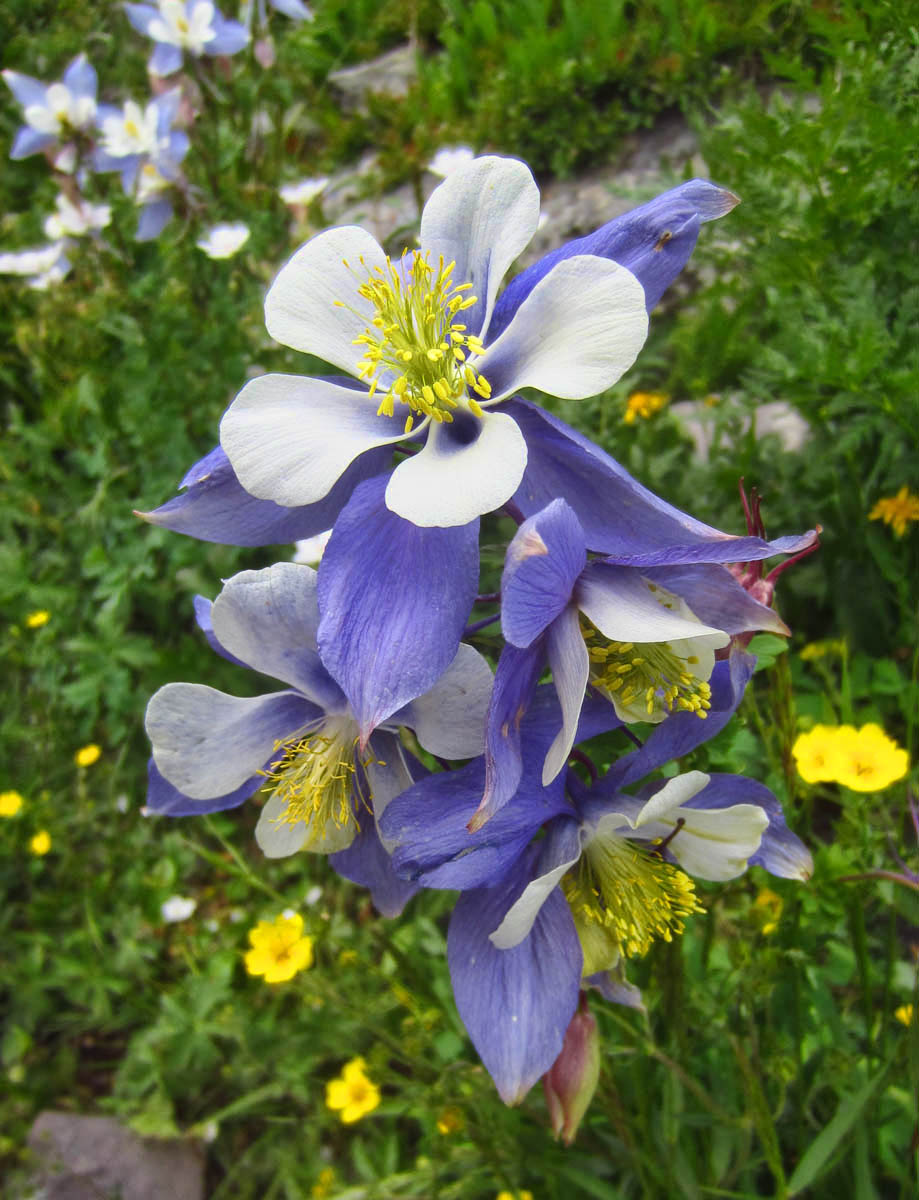 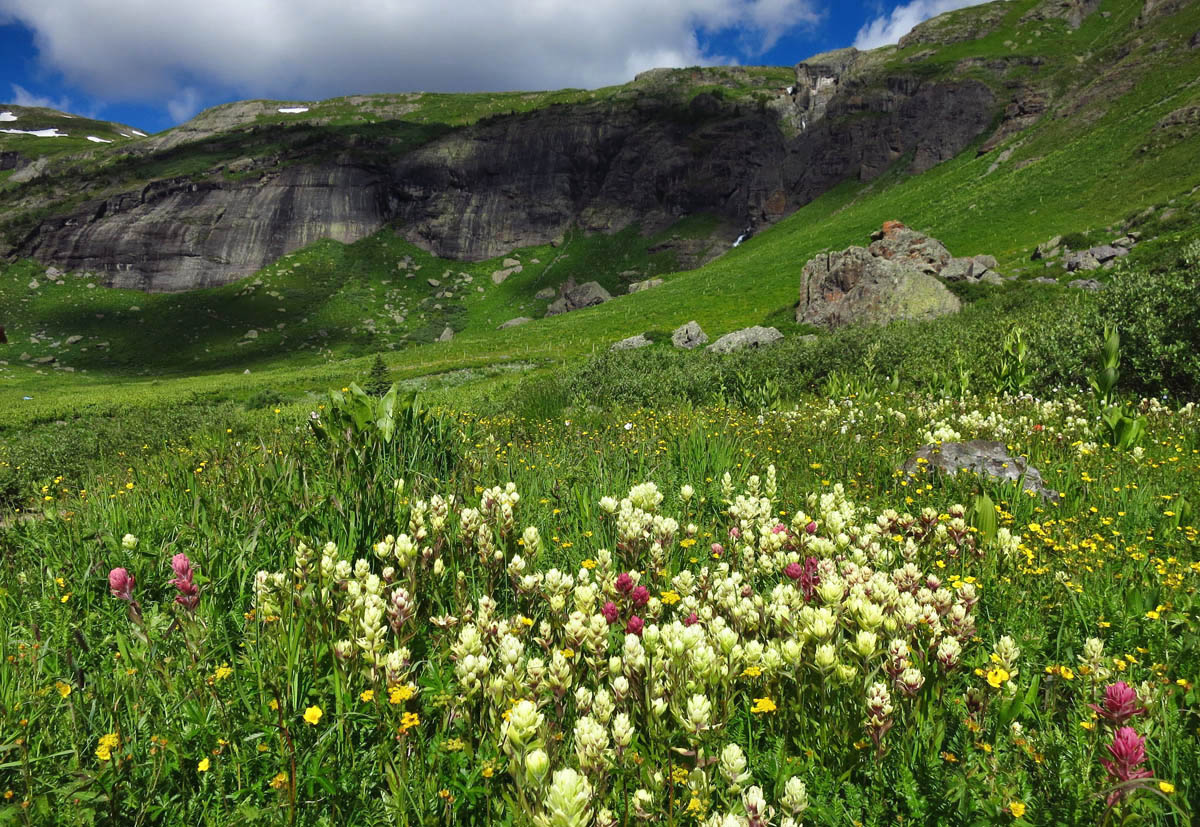 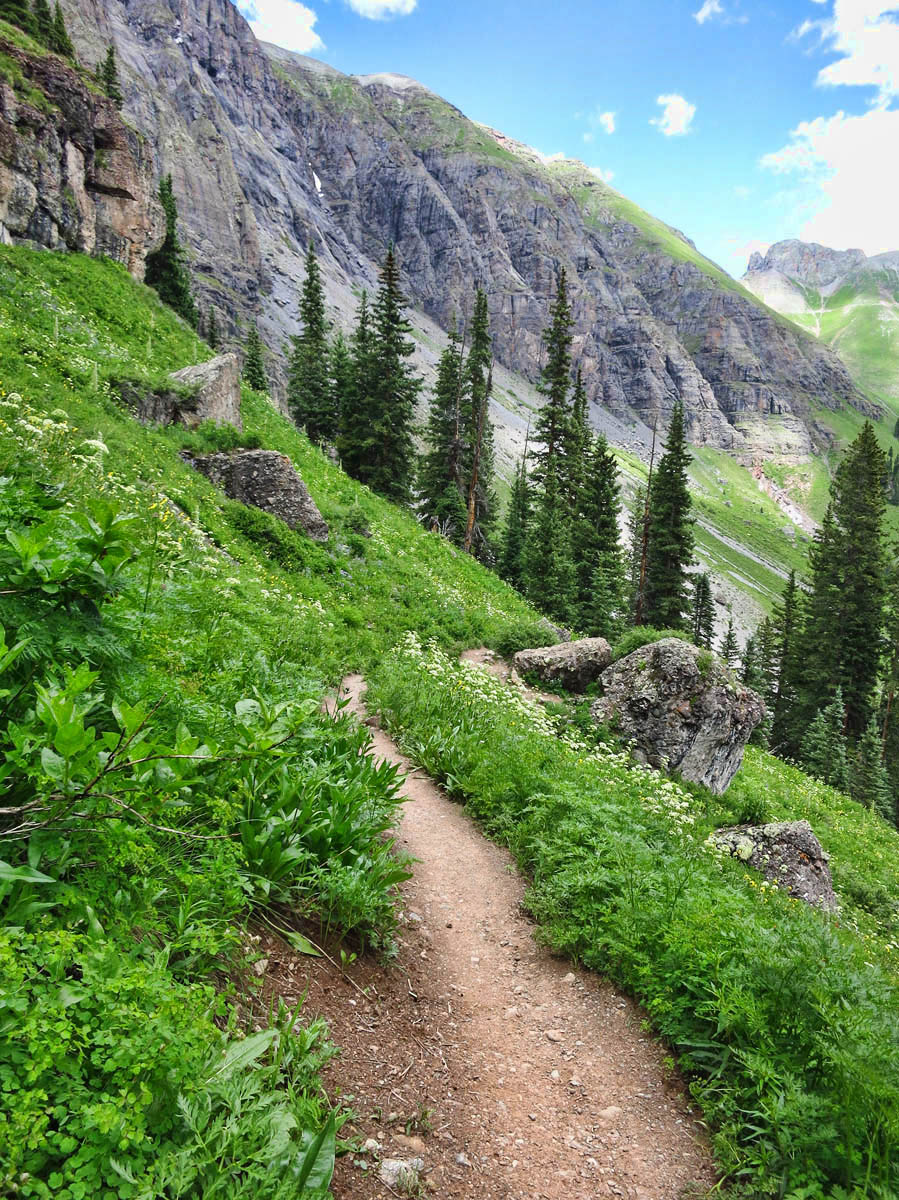 People often tease me about my “bucket lists,” but I find having a destination to look forward to often helps me through the more challenging times….like 75 straight days parked down on the farm in triple digit heat. I am a firm believer in “visualization as a path to manifestation,” so with a picture of a high alpine lake on one wall and a road map of scenic drives of Colorado on the other, I somehow got through some pretty dark valleys in the shadow of death…

I even used Ice Lake as a carrot on the end of a stick to motivate me to get to the gym. When I first sat down with Personal Trainer Micah, he asked me about my fitness goals. I said, “Well, there’s this hike to this high alpine lake…” 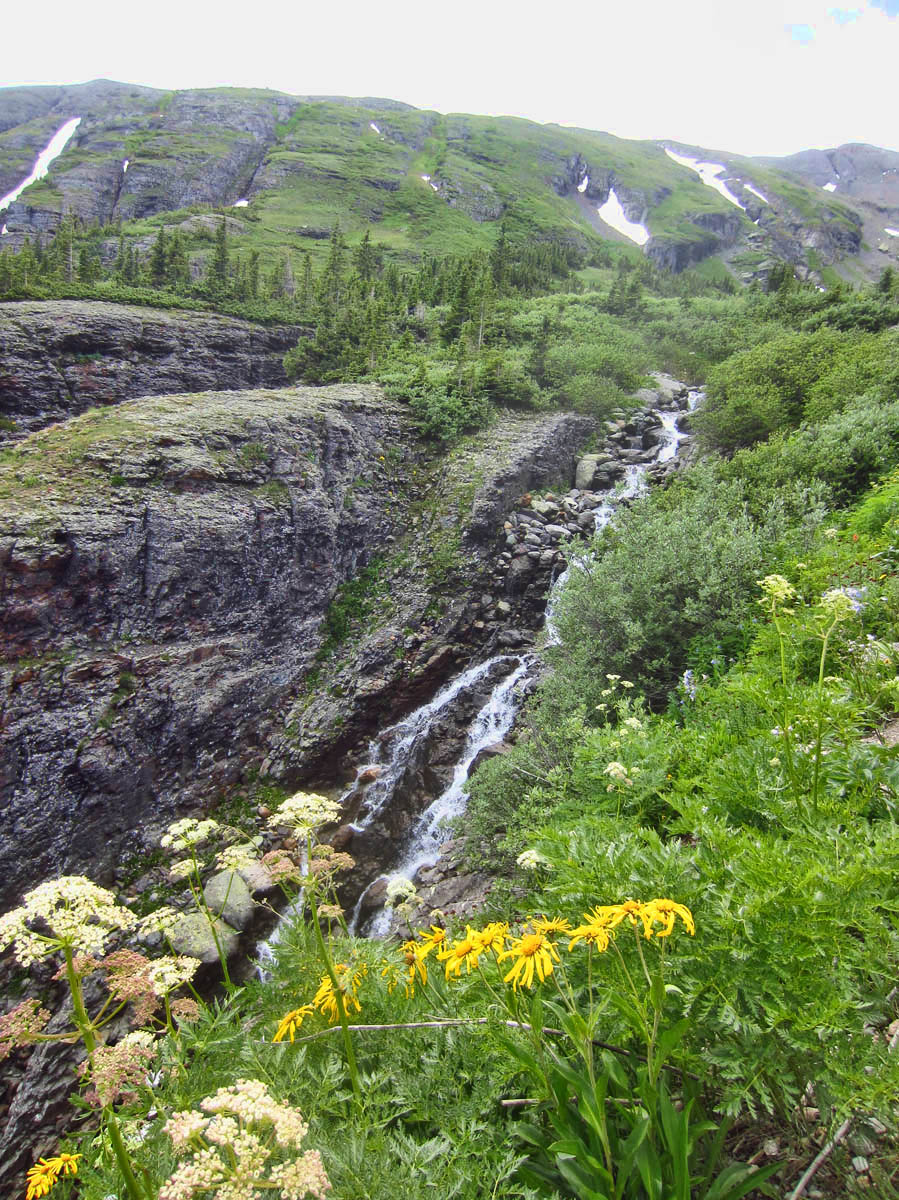 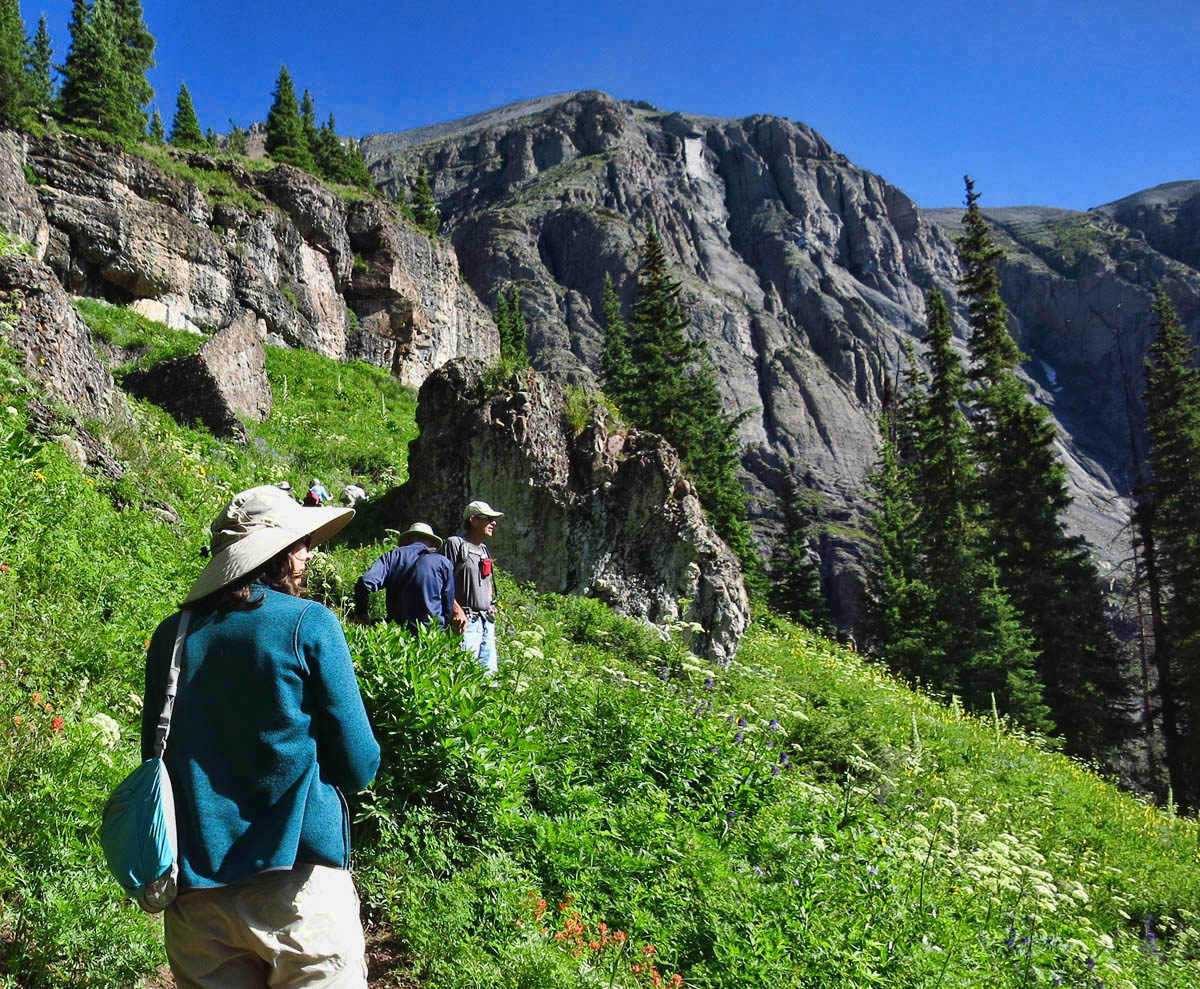 It’s monsoon season in the Rockies, and that means weather conditions must be just right for a hike to the high ups. We have been waiting for several days for the weather forecasters to align on whether the storms will arrive in the morning, the afternoon, or both, when finally a fair weather window appears on the calendar mid-week. Waiting for this day to arrive is agony, as it feels like this is turning out to be one slippery “carrot.” 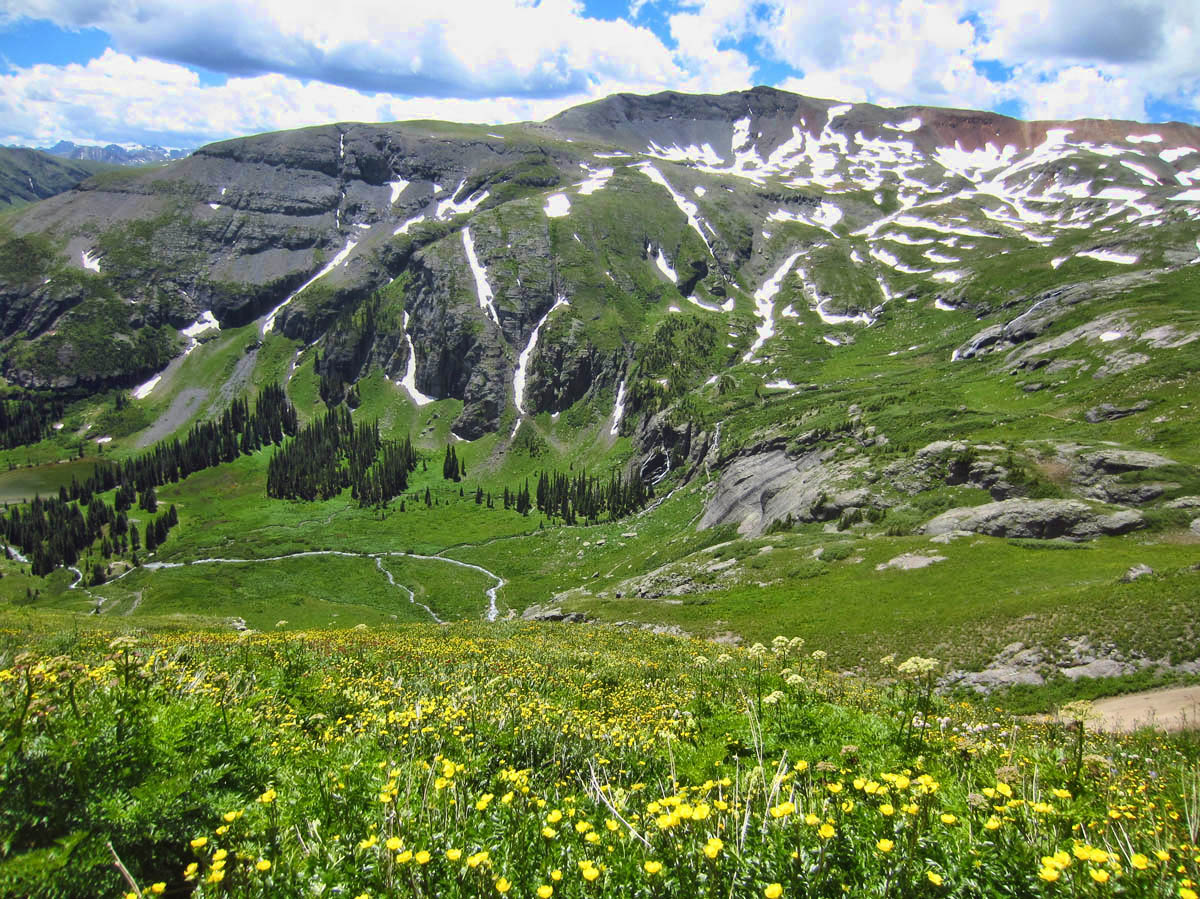 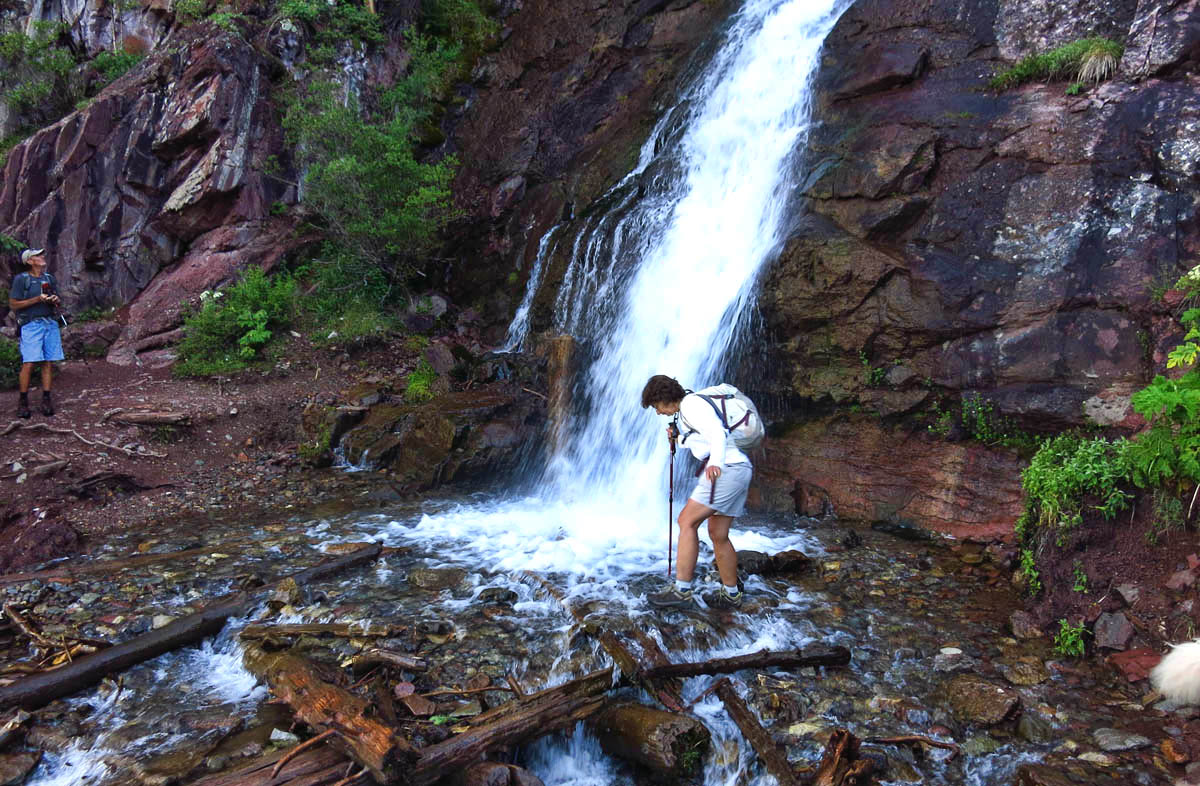 Finally “Ice Lake Day” arrives, and spirits are high in anticipation. We drive up above the South Mineral Campground near Silverton in the Subarus to shave a mile of “up” off the hike. Bobbie’s boss Tamara has joined us, and the two of them disappear ahead on the trail like a couple of Thompson gazelles, but I suspect trouble ahead when we find them waiting for us at the waterfall. Due to late spring snows, the water is deeper than they have seen it in recent years. Bobbie and I are the only two without waterproof boots. She tiptoes across the rushing water like a “Connect the dots” game, but we have only been on the trail about a quarter of a mile. I just don’t think I can risk hiking six miles in wet shoes and socks. I want this hike too badly to take a chance on blisters from wet feet, so I strip down barefoot and wade the icy water. Little do I know it is going to be a day of stream crossings, the end of which will find me casually sloshing back across this same waterfall up to my ankle bones. (Thank goodness for wool socks!) 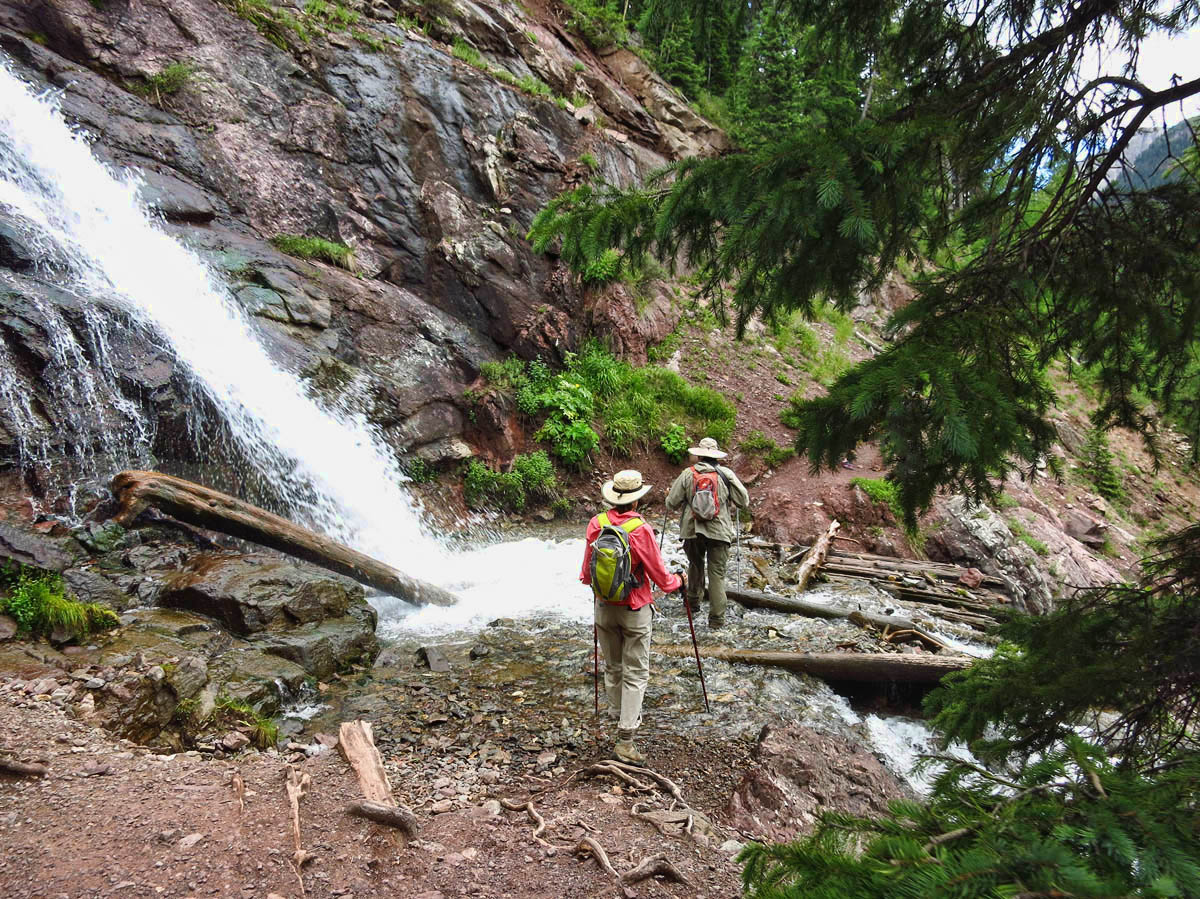 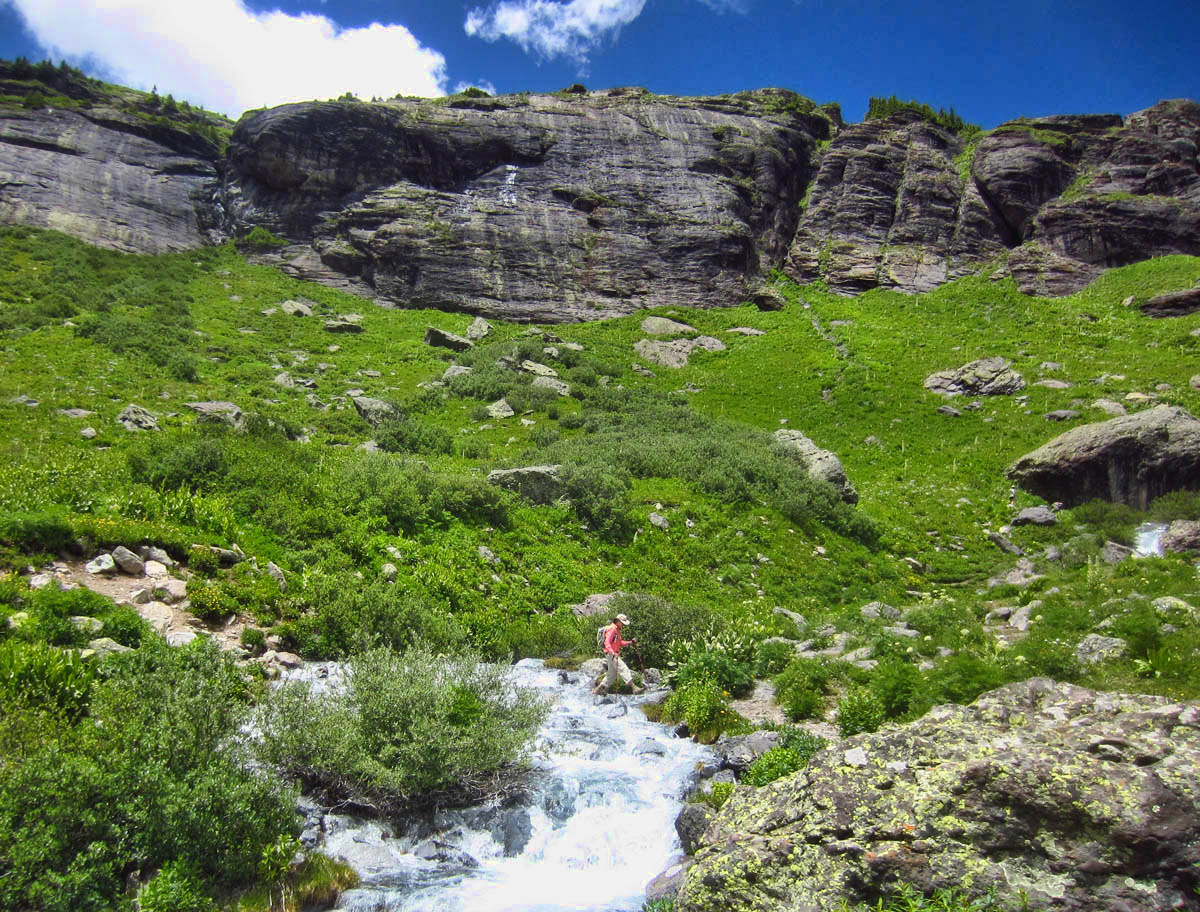 Gayle, fording one of the many stream crossings. 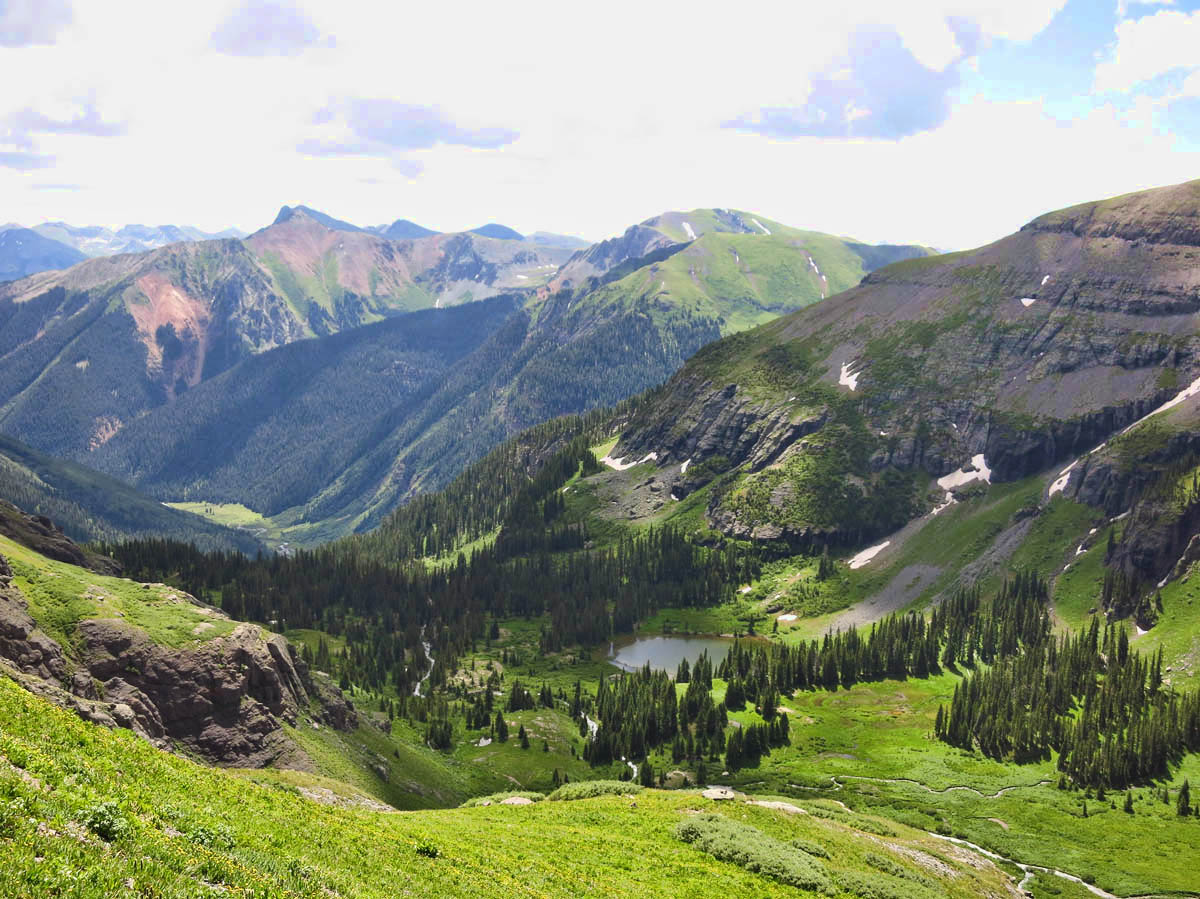 The trail starts off with a series of switchbacks gaining 1,600 ft in the first two miles. My breathing is labored as I struggle with the altitude, but I decide before I ever start that I am going to “hike my own hike” today, focusing more on getting there and less on keeping pace with the others. Pride comes before a fall, so I take my time. Thankfully, the picturesque wildflowers and stream crossings help to slow the group pace. 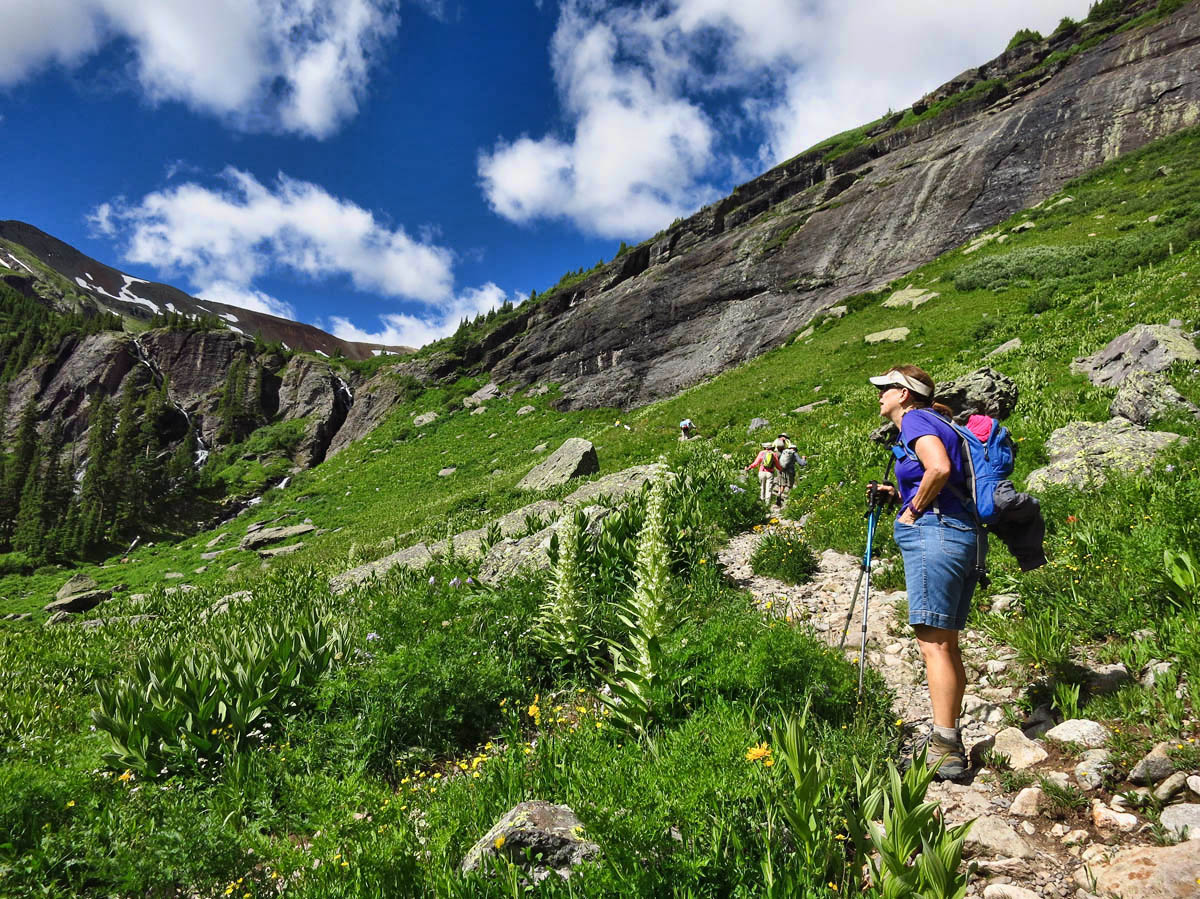 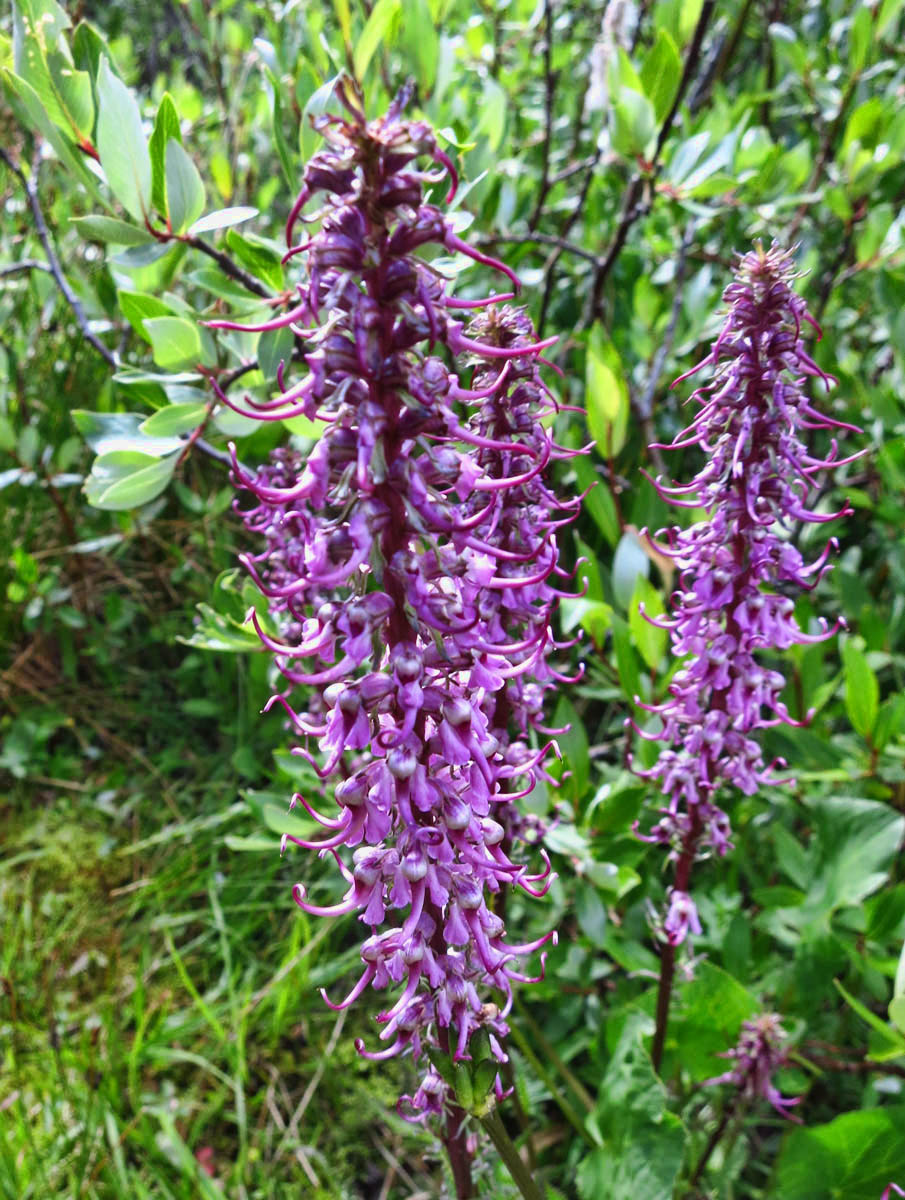 Elephant Head, named because each tiny blossom has what looks like an elephant’s trunk. 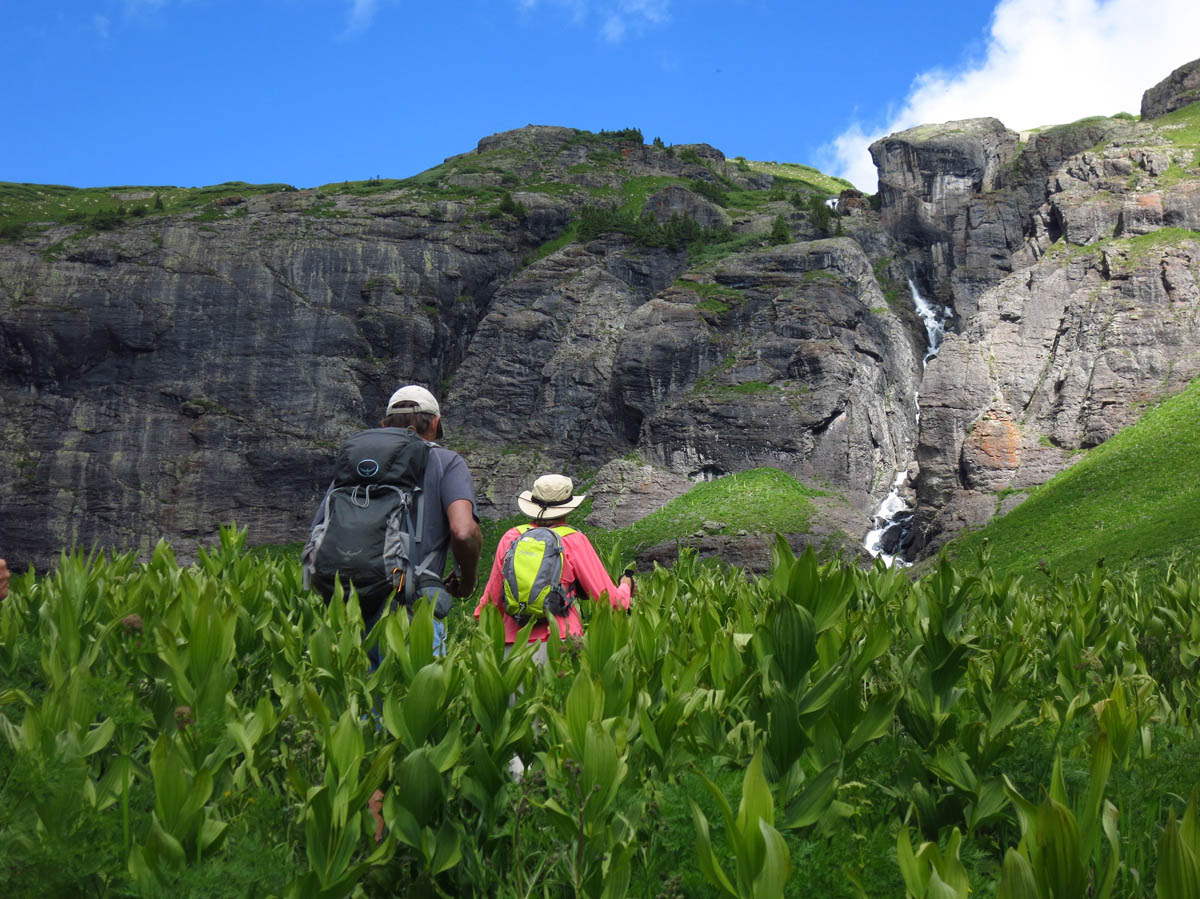 The final approach is the toughest yet. The trail gains 700 ft in elevation in a little over half a mile. Mark is shouting back dwindling ETAs, “Just another 15 minutes and we will be there! Down to single digits now!” I am reminded of my climb to Kilimanjaro where the guide told me “Just another 20 minutes” for three straight days. 😉 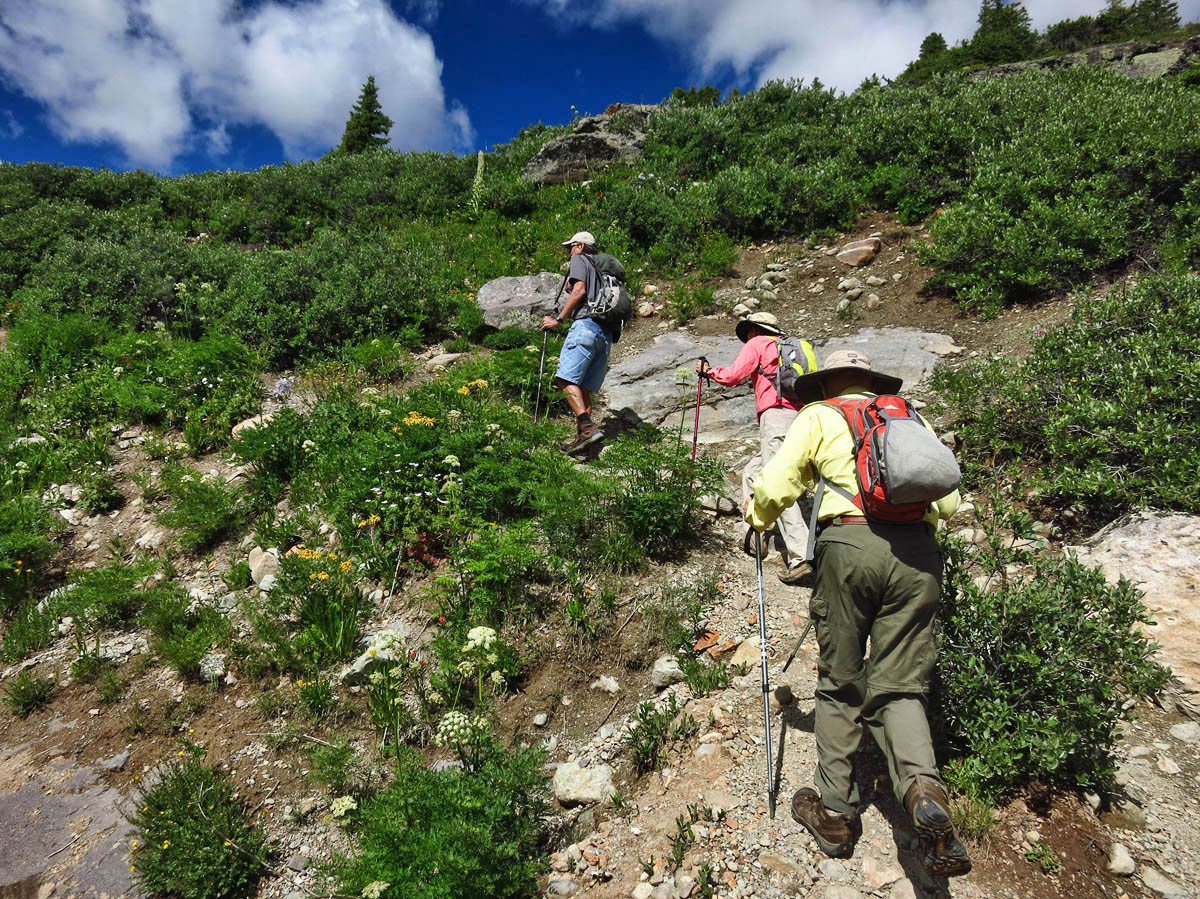 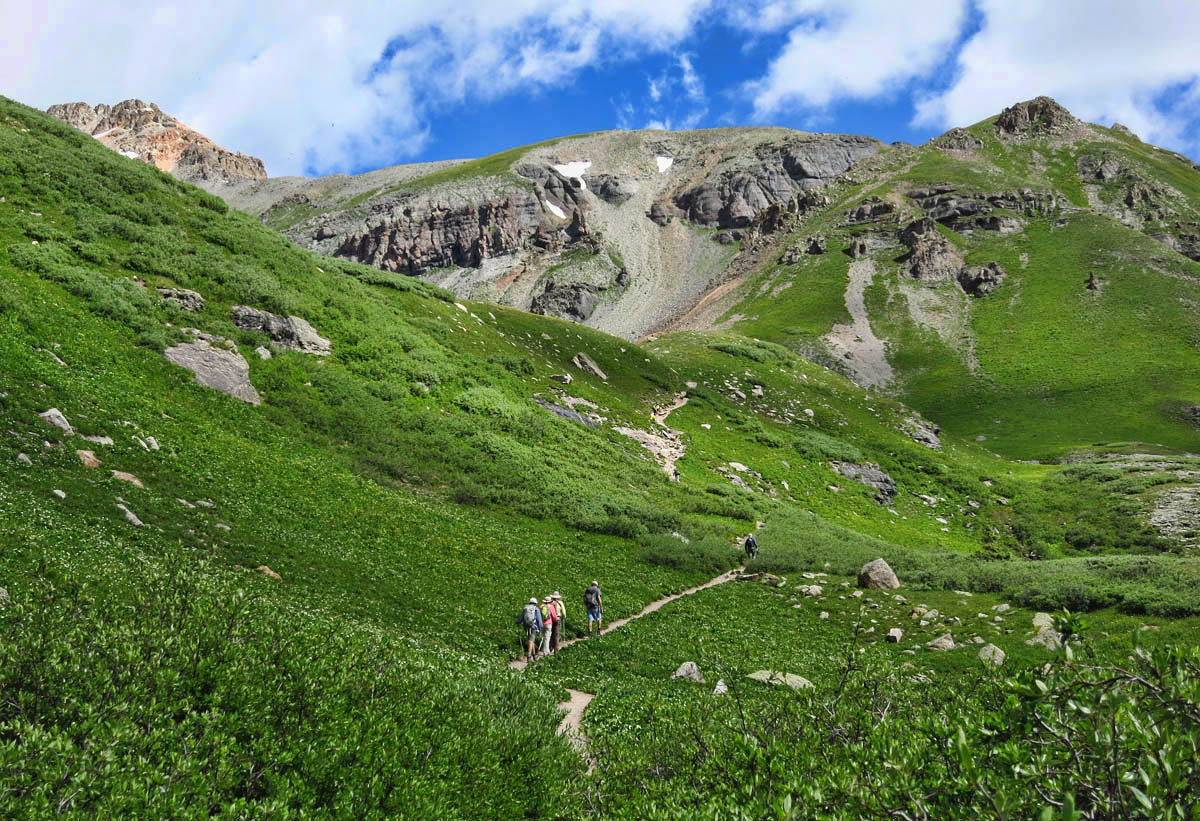 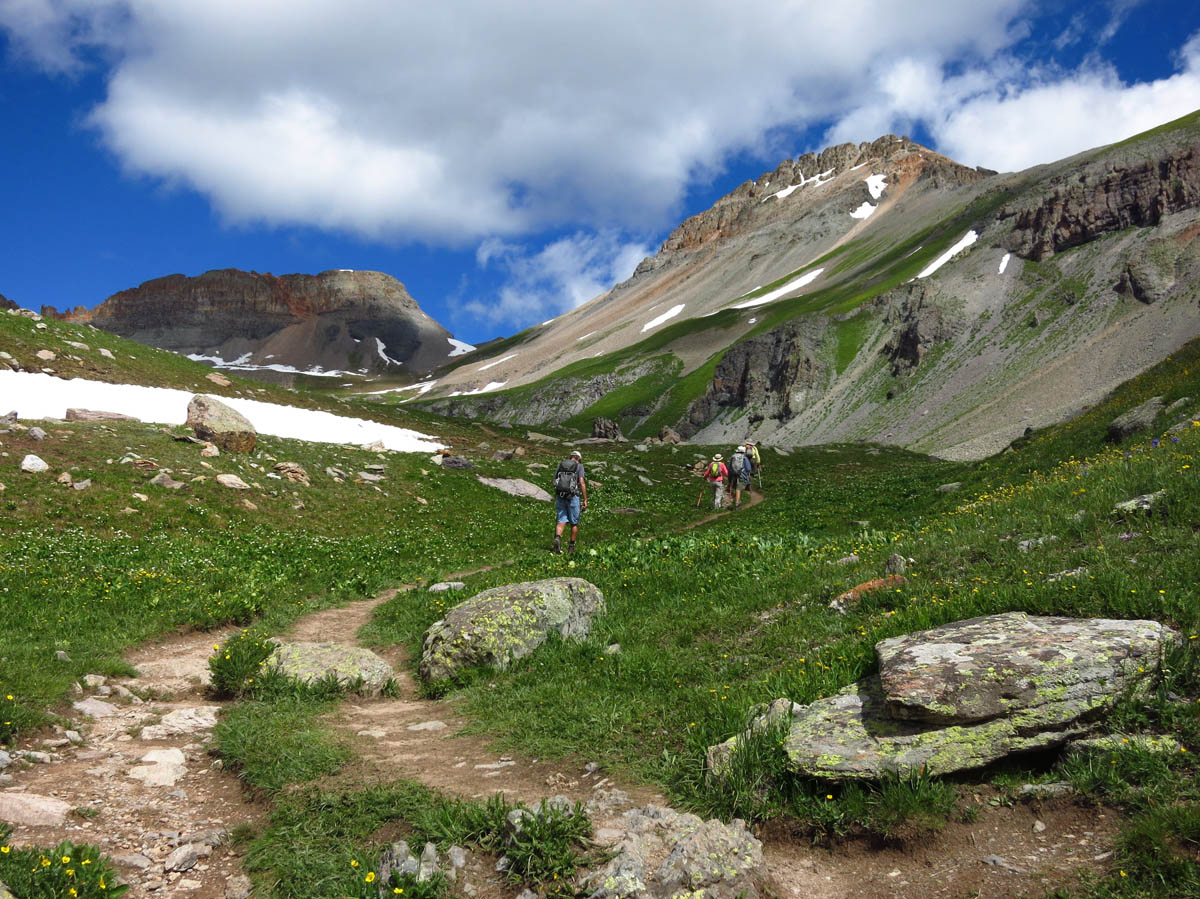 Finally, I hear “WHOOP!” coming from over the ridge, indicating that the faster hikers among us have arrived at the lake. I try to speed up, but my lungs, my brain, and my quads are waging war against each other for what little oxygen I can capture with my rapid, raspy breathing. 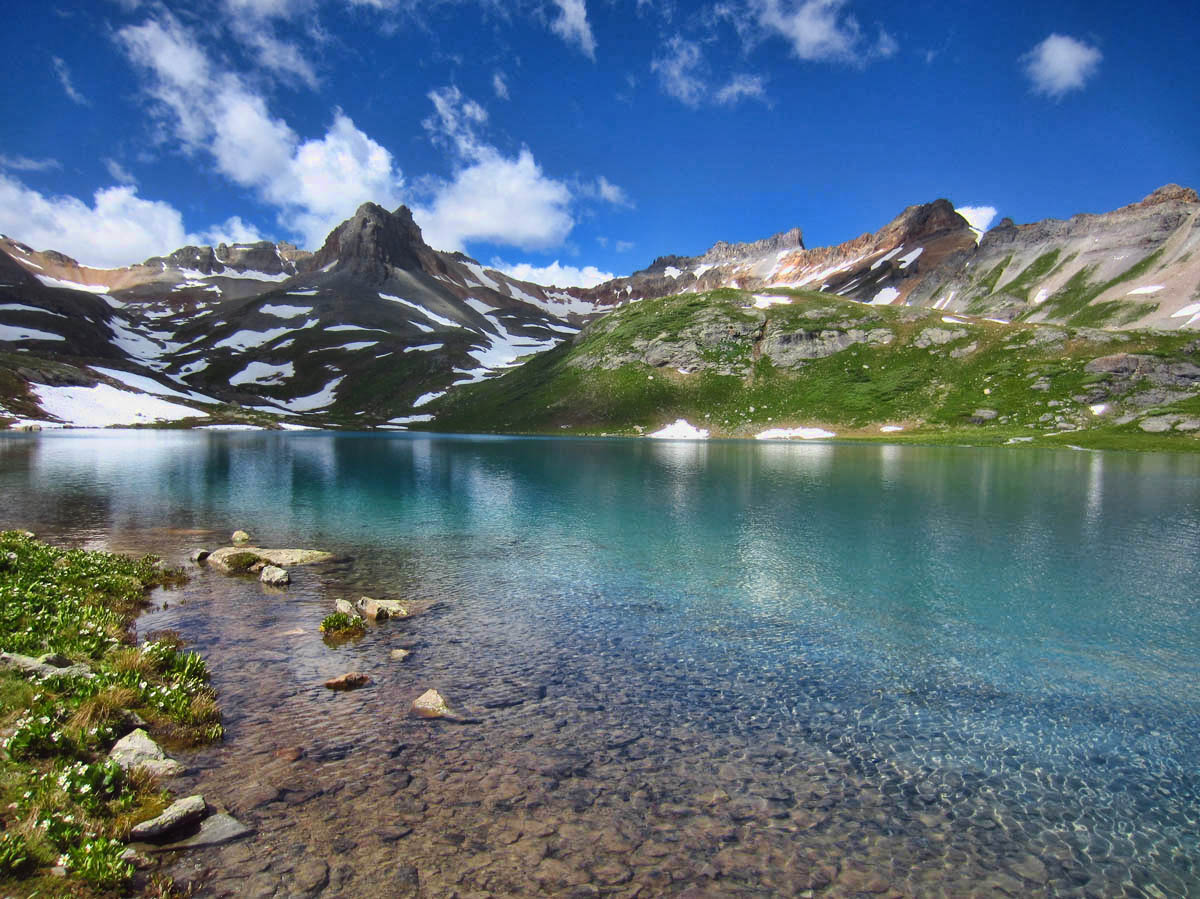 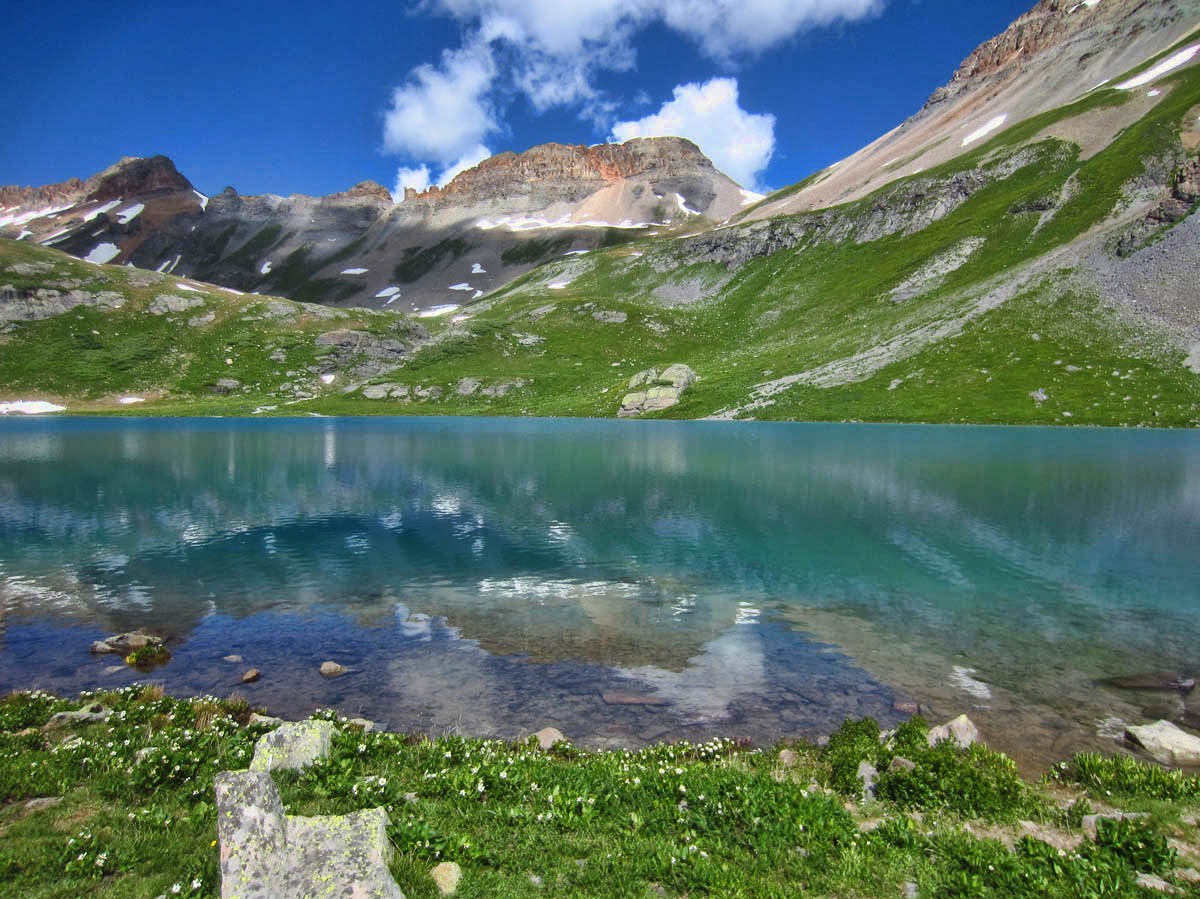 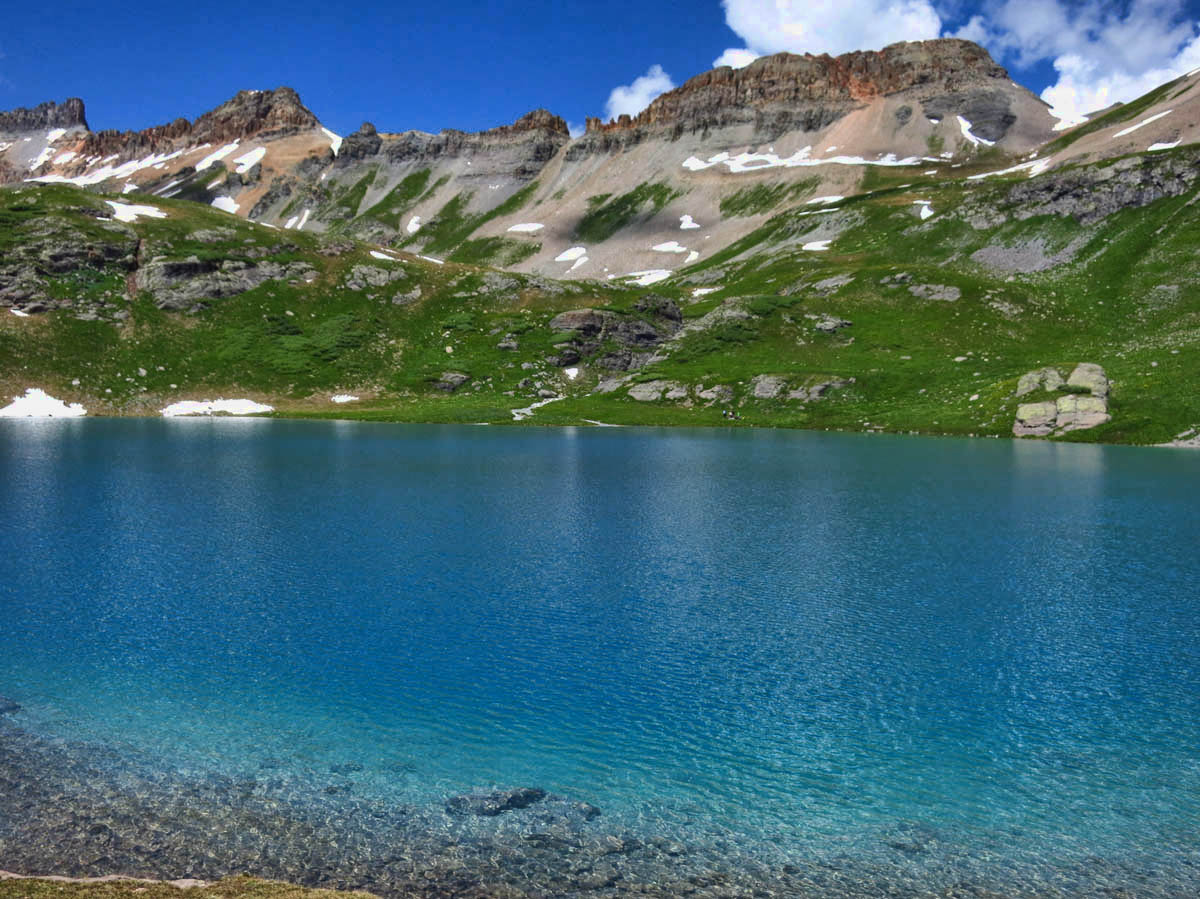 Once I reach the edge of Ice Lake, I lose it. My heaving breaths turn into sobs, as I am overcome by not only the beauty of the lake, but all that it has taken to get there. The long, hot days back on the farm dreaming of the cool mountain air. The sweat spilled down the Stairmaster back at the gym. The alpine lake calendar tacked to the wall back in the Winnie with the blood red X’s marking my eluding day of departure. And the memory of the loss of my brother still so fresh and raw. It wasn’t the 3.1 miles it took to get to Ice Lake, but the 900 that went before it. 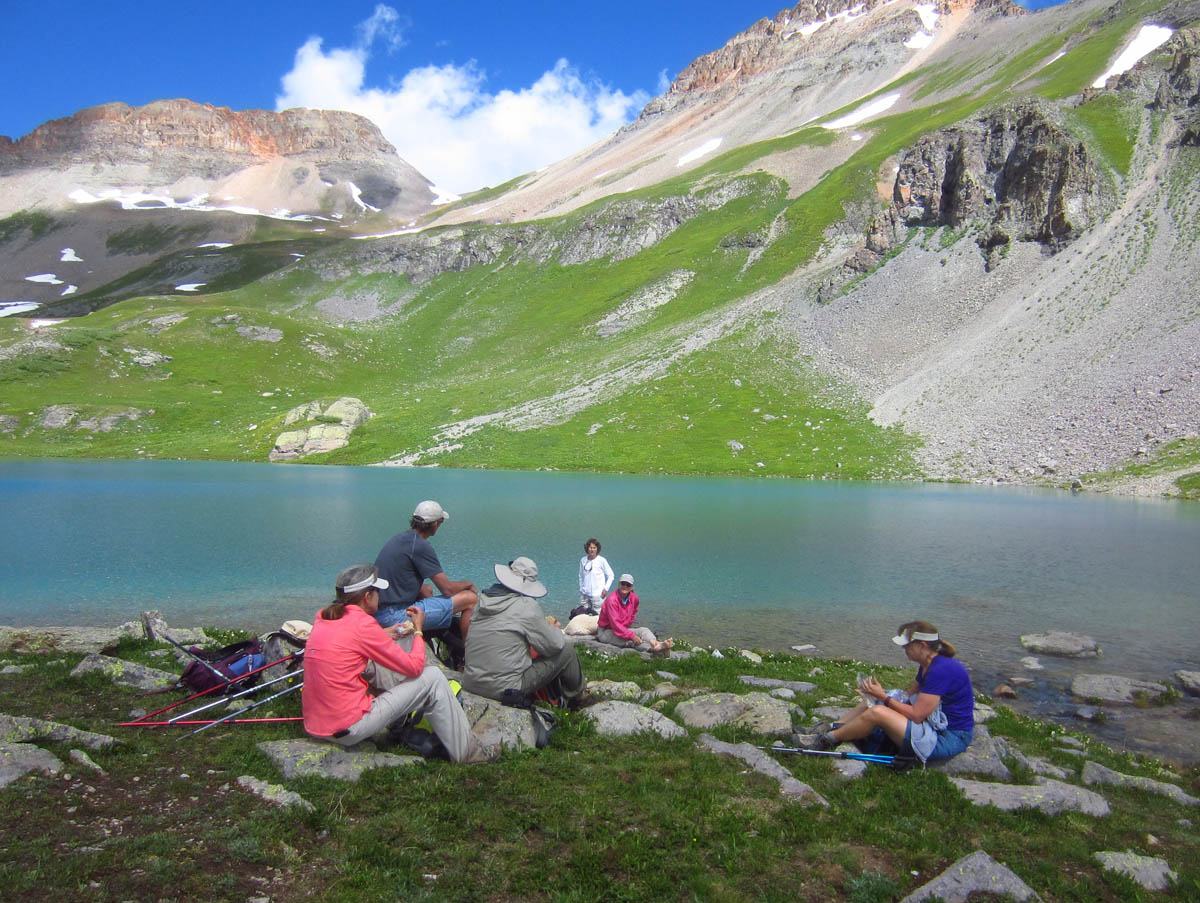 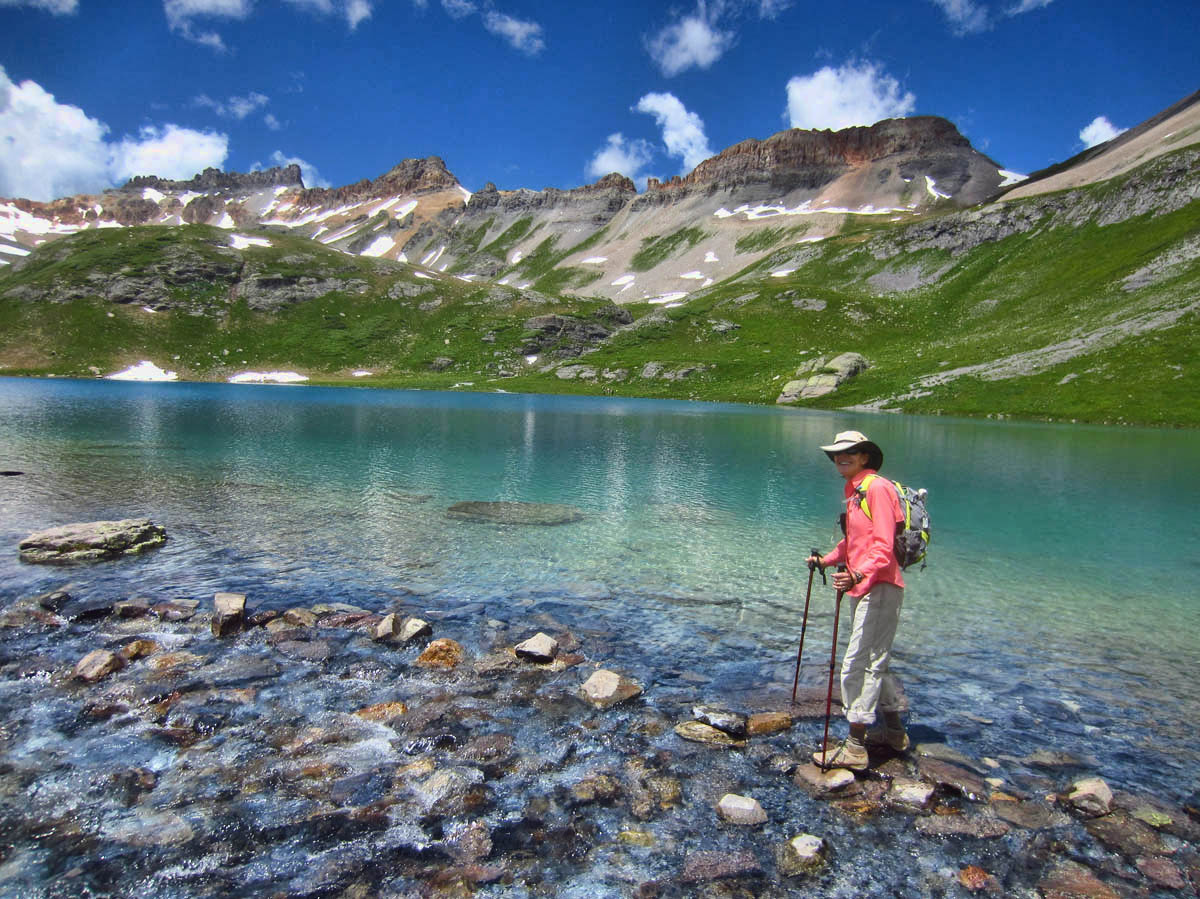 I spend some time near the edge of the lake, staring into the clear, shimmering water the color of Windex. I ponder removing my shoes and socks again, and wading out as far as my nerve endings will allow. But then, I get a glimpse of movement out of the corner of my eye….the Thomson Gazelles are on the move again, leaping across the stream and up the hillside in search of a second lake, and I want to go too! 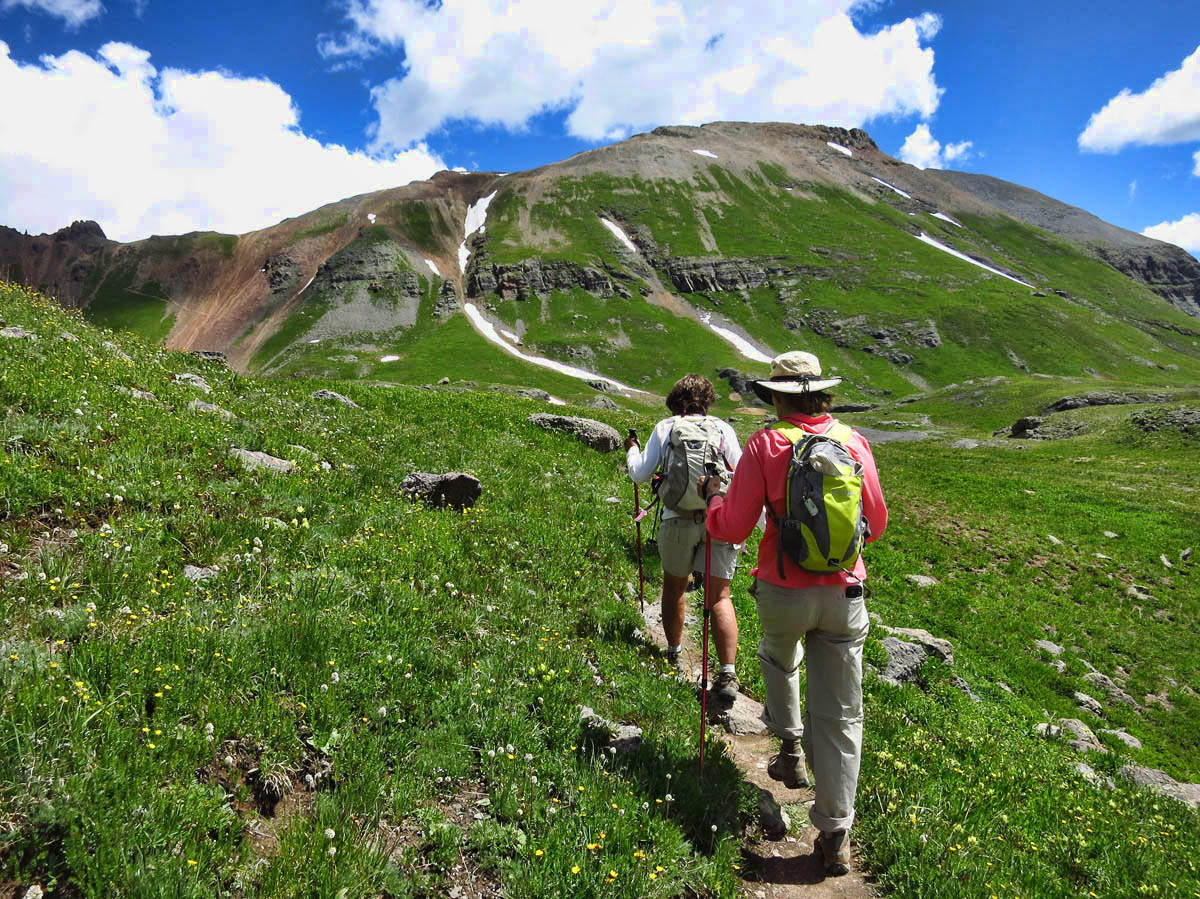 Following Bobbie and Gayle beyond Ice Lake to Island Lake. 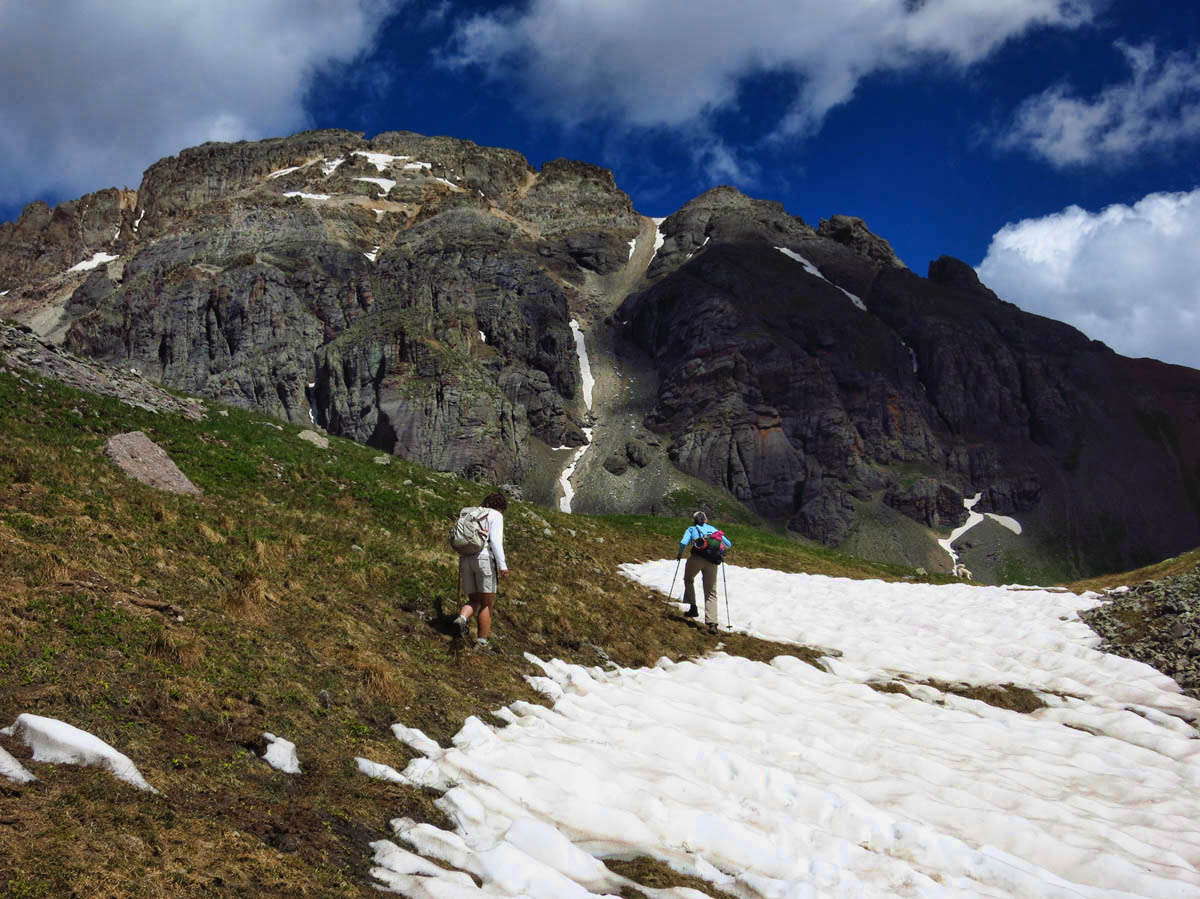 Tamara and Bobbie, tracing around the snow pack. 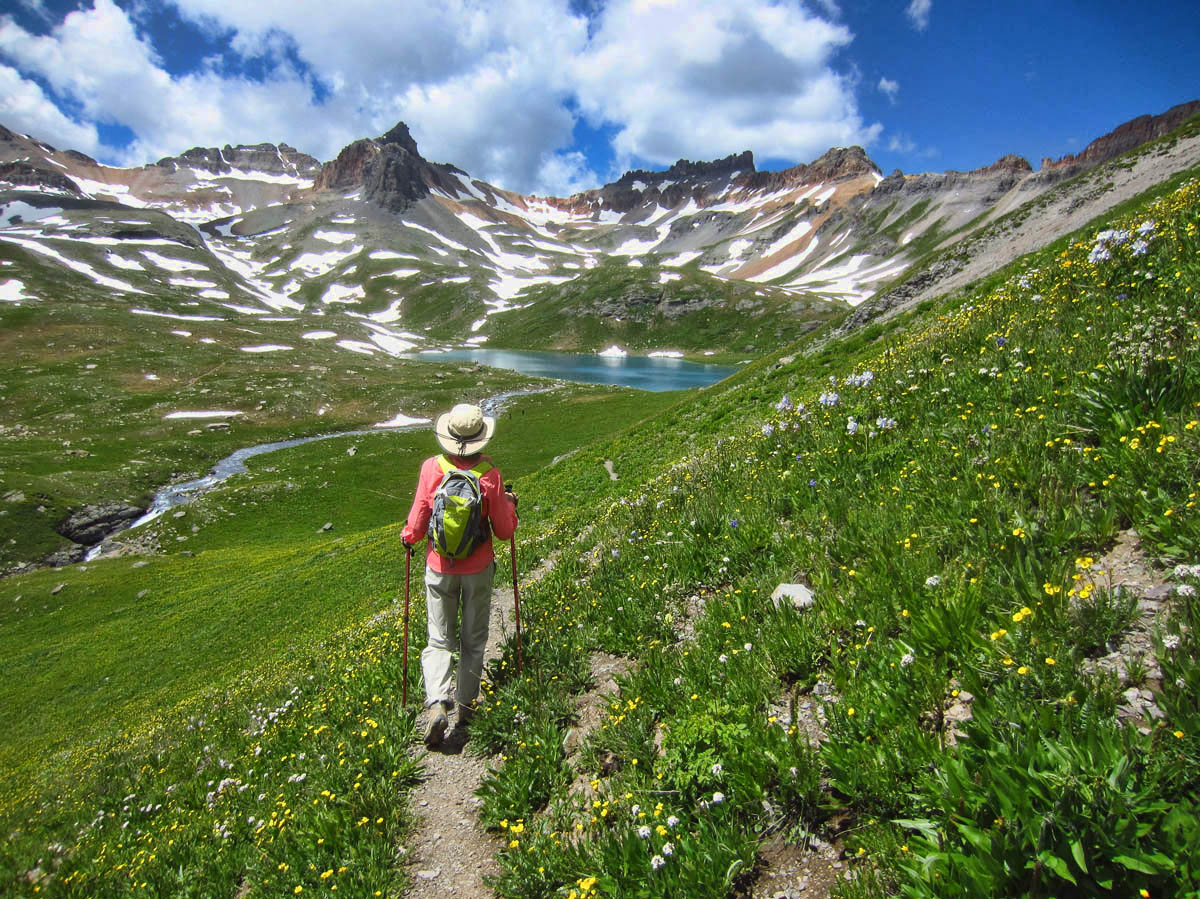 Gayle and I (and later, Jim) scramble to follow Bobbie and Tamara across the Ice Lake outlet, up the grassy slope over the next ridge, skirting a snow bank. We crest the ridge to see below us “the icing on the cake,” the stunning aquamarine Island Lake. 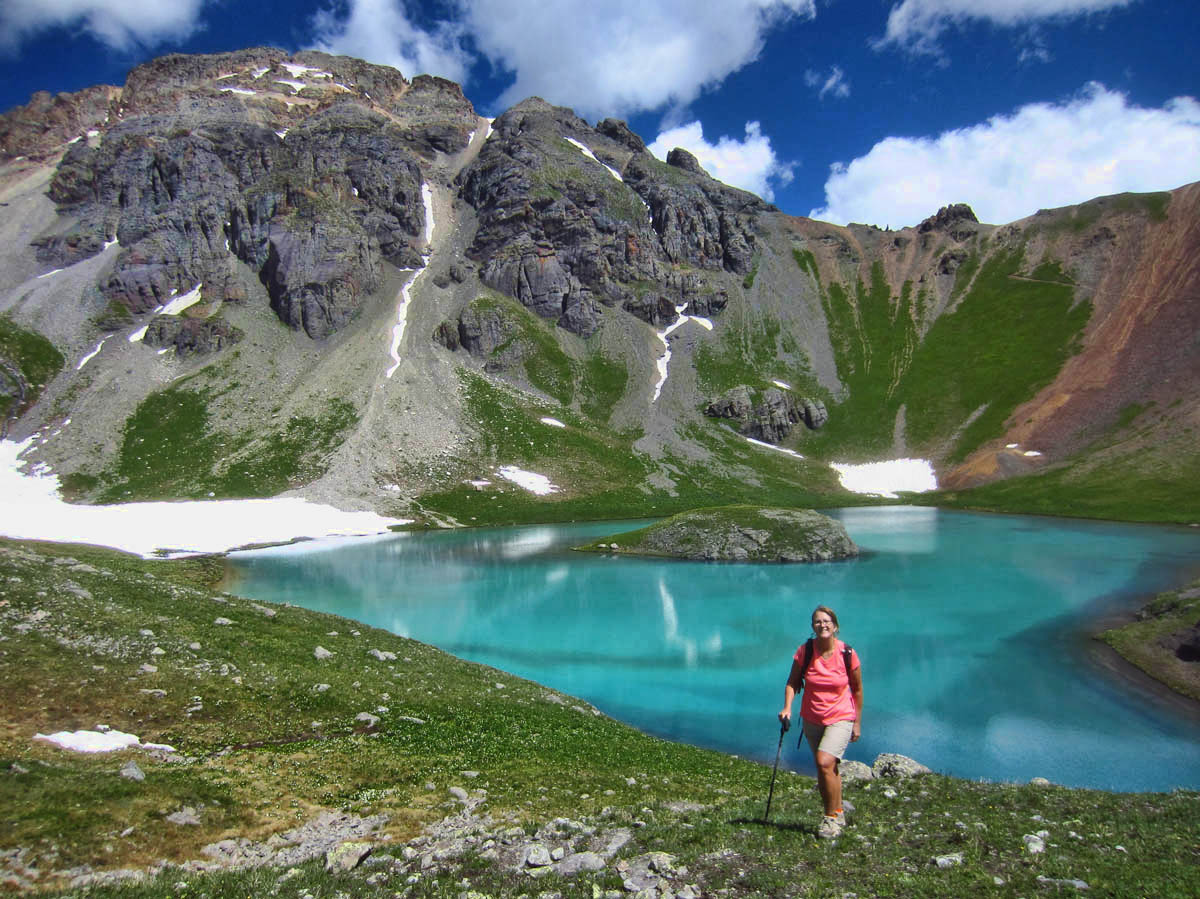 No one else around. Stillness. Quiet. Not a sound but the cold wind whipping over the pass, bringing an ache to my bare eardrums. Looking at the color of the water, one wonders if the eyes are playing tricks. Ah, Shangri-La indeed… 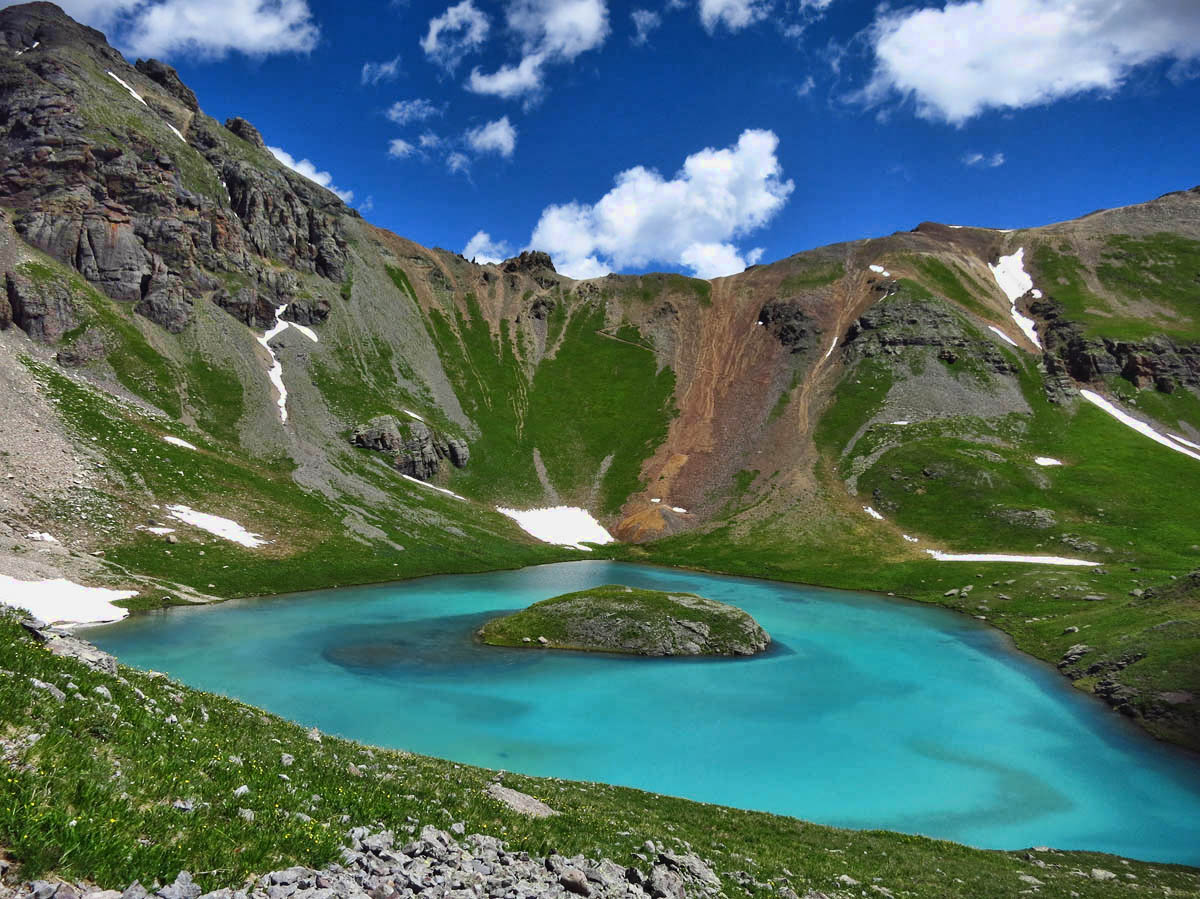 16 thoughts on “The Lost Horizon”