Back on a cold winter day in 1888, the Wetherill brothers were out in a snow storm looking for lost cattle when they spotted through the snowflakes something they described as “An enchanted castle.”  They had stumbled upon what is now known as the Cliff Palace.  Therefore, like Columbus who sailed the ocean blue in 1492 to “discover” America, the Wetherill Brothers were credited with being the first to “discover” the Cliff Palace.   Nevermind about the people who lived there for 100 years, or all the subsequent Puebloans, Navajo, Hopi, Zuni, etc. that followed.  The mesa is named for the Wetherills.  (You can’t please everyone, so you’ve got to please yourself!) 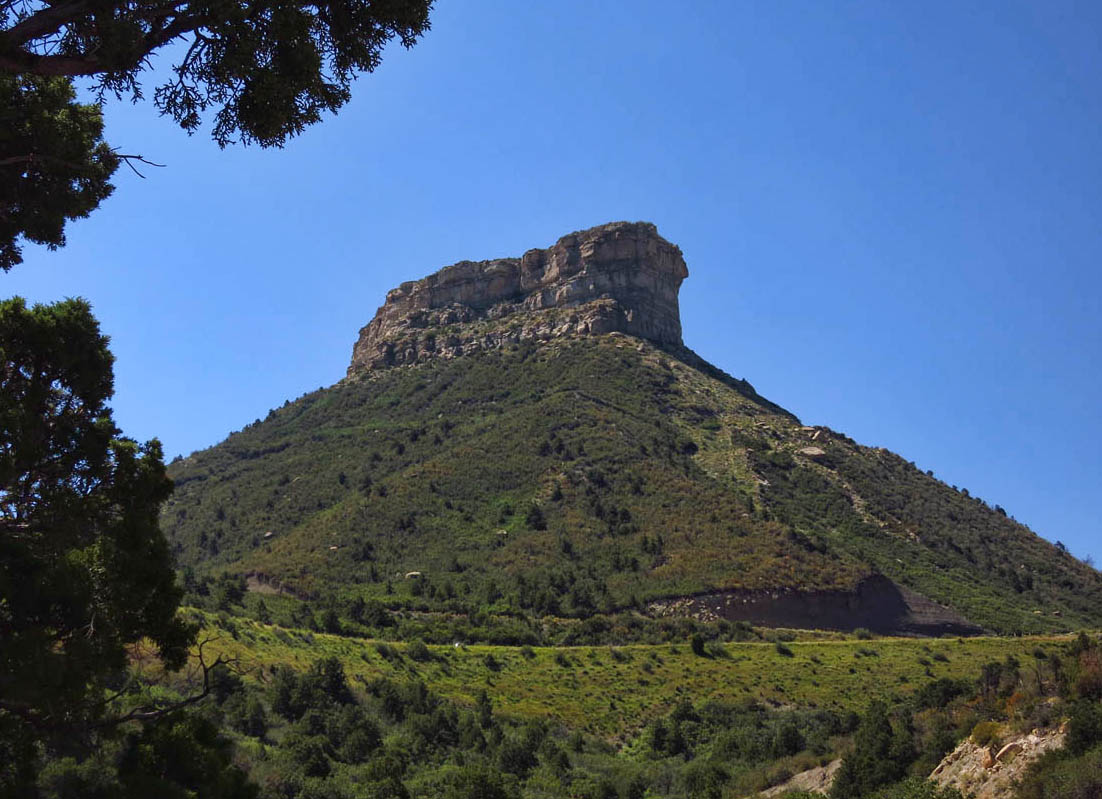 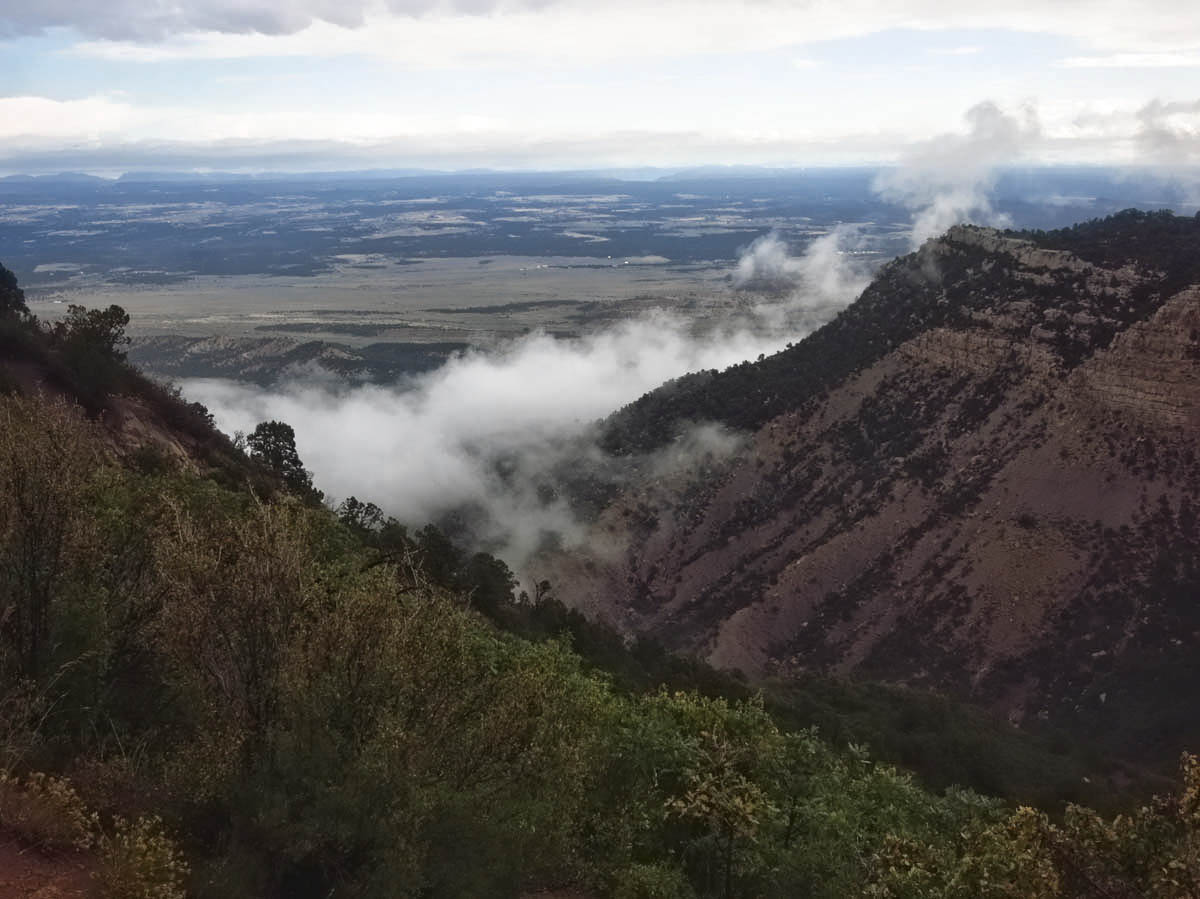 Early morning fog on the drive to Wetherill Mesa

This is reported to be the “quieter side of Mesa Verde,” as it does not contain the more popular tourist draws like Cliff Palace and Balcony House.   I know the road is going to be a “treat” when I read that no vehicles more than 25 ft or 8,000lbs are allowed on the 12 mile, narrow, steep and winding road to Wetherill Mesa.   When I also read to allow 45 minutes to an hour to travel twelve miles, well, I know it’s going to be a rough ride.  There’s not a straight, level stretch in the entire 12 miles. 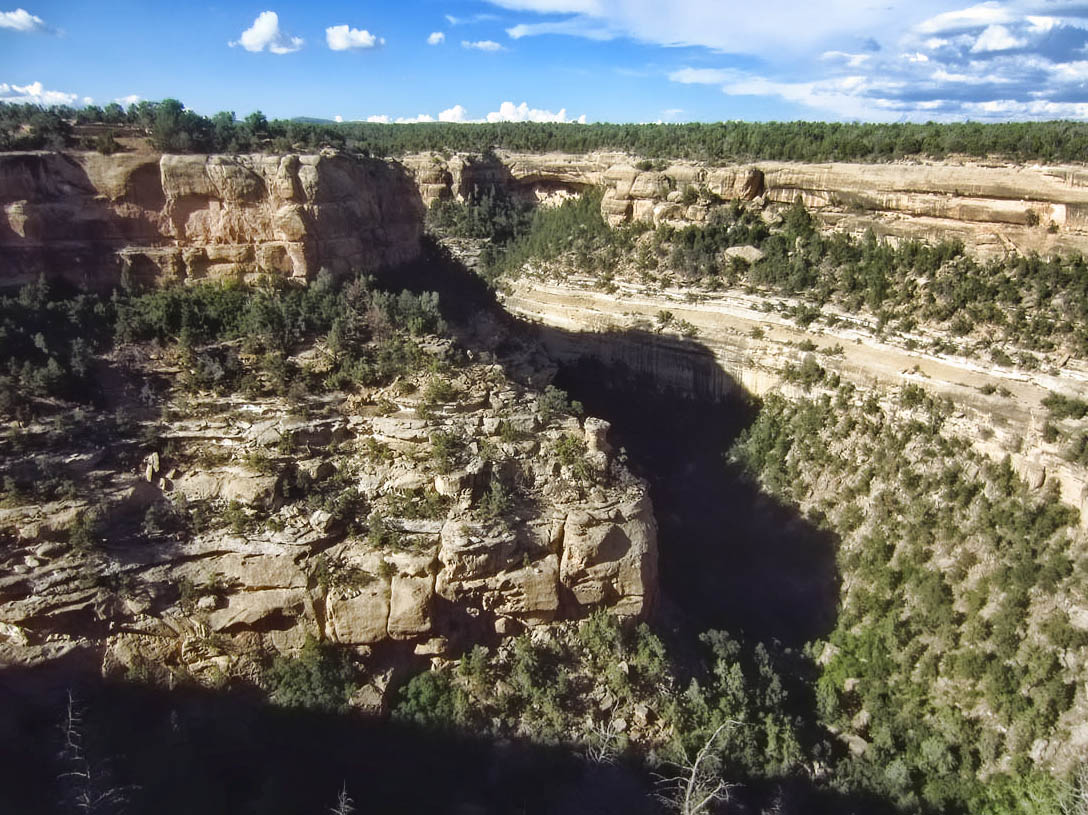 View from the Long House. Do you think they knew they had a “view?” Or was the view all they ever knew? 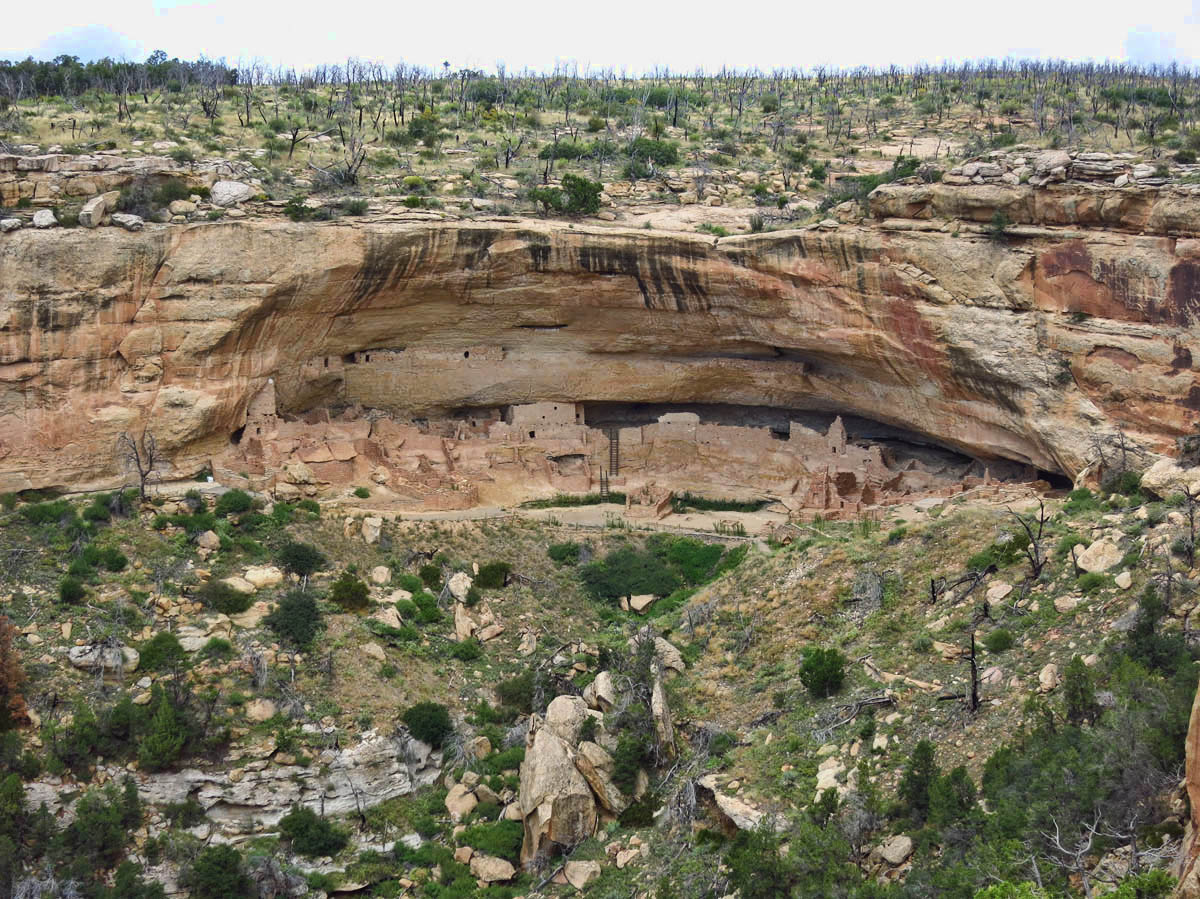 View of Long House from across the canyon.

The primary reason to visit Wetherill Mesa is to tour Long House, another Ranger-led tour.   Long House is the second largest cliff dwelling in Mesa Verde, including 150 rooms and 21 Kivas, just slightly smaller than Cliff Palace, yet it is not visited as frequently.   This tour is considered a little more strenuous, because it involves a 2.25 mile hike to reach the site, including ladders, stairs, and a 130 ft elevation gain. 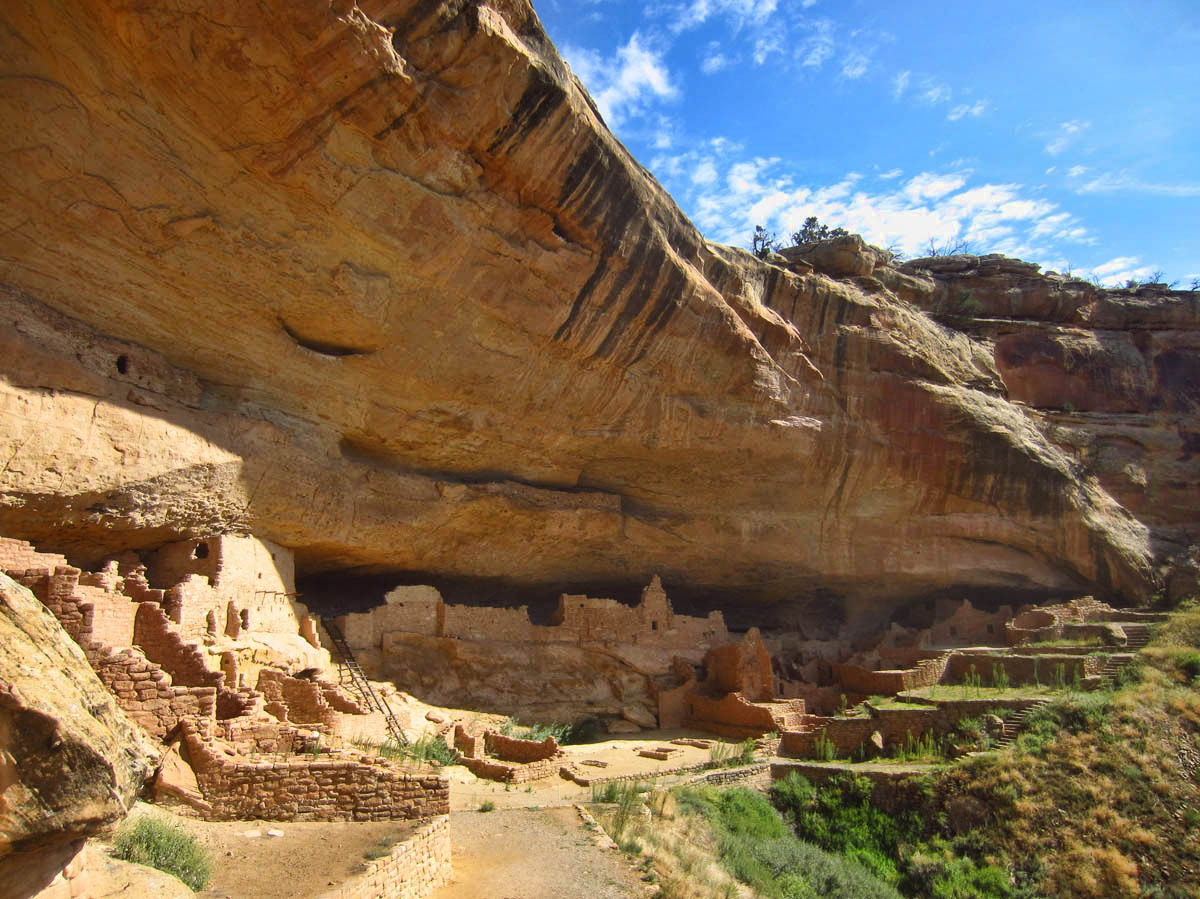 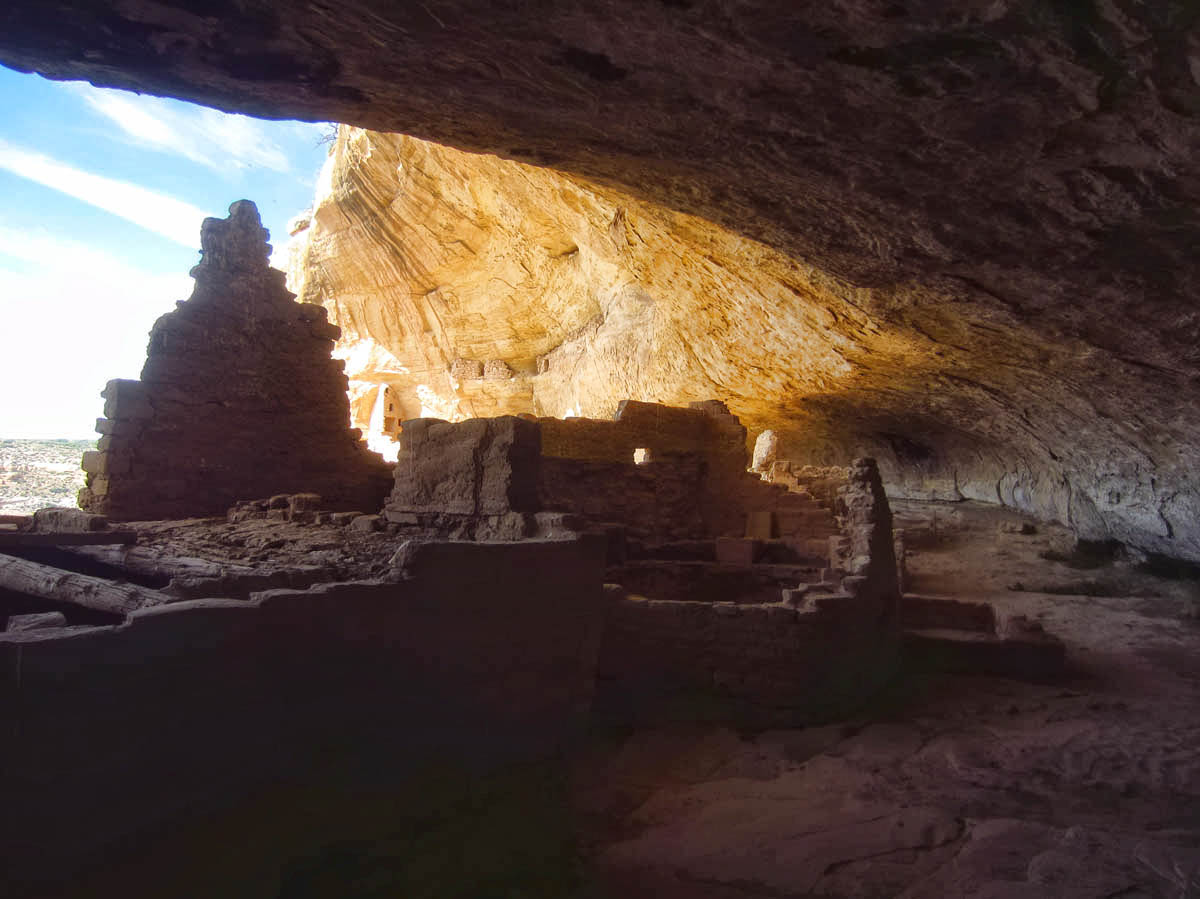 View of Long House, looking out from the back of the alcove. This tour allows deeper access than Cliff Palace.

The tour ends at the trail head, giving the option to continue hiking the mesa, or returning to the Wetherill Visitor’s Kiosk.   The mesa is designed more with hiking and biking in mind, and vehicles are not permitted on the roads.  At one time, there was a shuttle that made stops along the 5 mile Long House Loop Road, but there was a dispute with the concessionaire Aramark, and the shuttle no longer runs.   Therefore, the only way to access the additional mesa sites and overlooks is on foot or by bike. 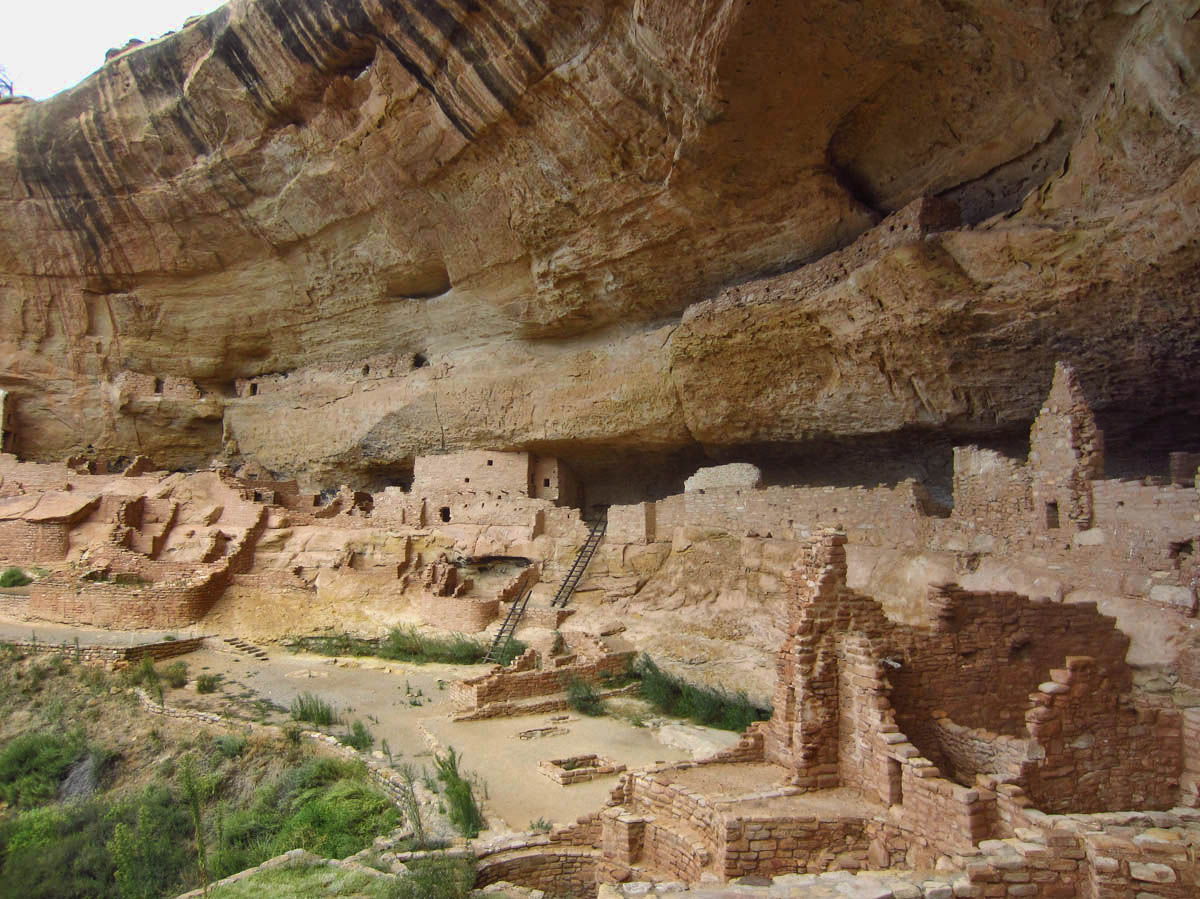 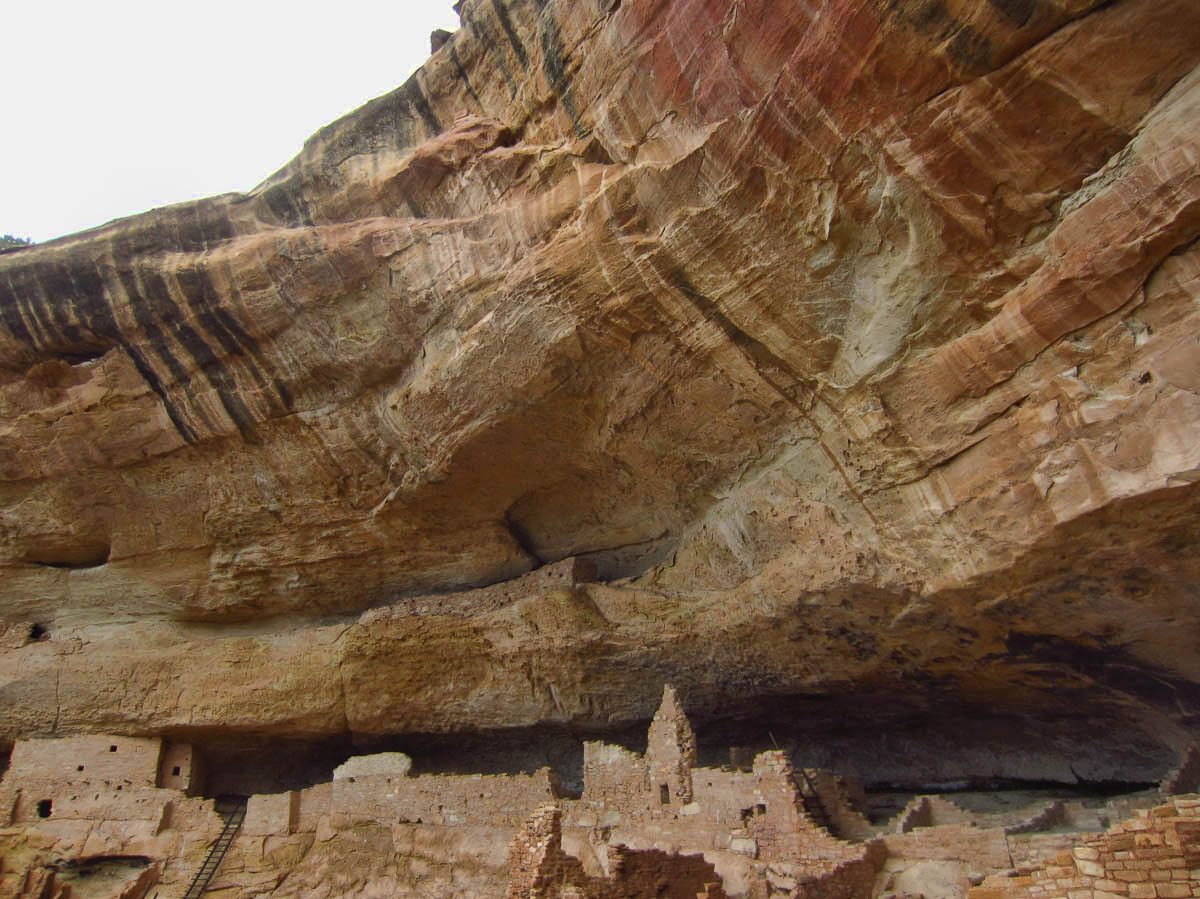 Long House has many granary rooms on the second floor.

Following the Long House Tour, I opt for the Badger Community Loop hike on the return.  This is a mesa-top display in four separate protective aluminum buildings linked together by trail.  These above-ground sites show signs of habitation prior to the cliff dwelling period, back to the pit houses of AD 550.  Although the Ancestral Puebloans are best known for their cliff dwellings, this was only a small part of the time they occupied Mesa Verde.   Most of their habitation was on the mesa top, where they farmed squash, corn, and beans.  It was only in the last 100 years that they moved down into the alcoves and built what have come to be known as “cliff dwellings.” 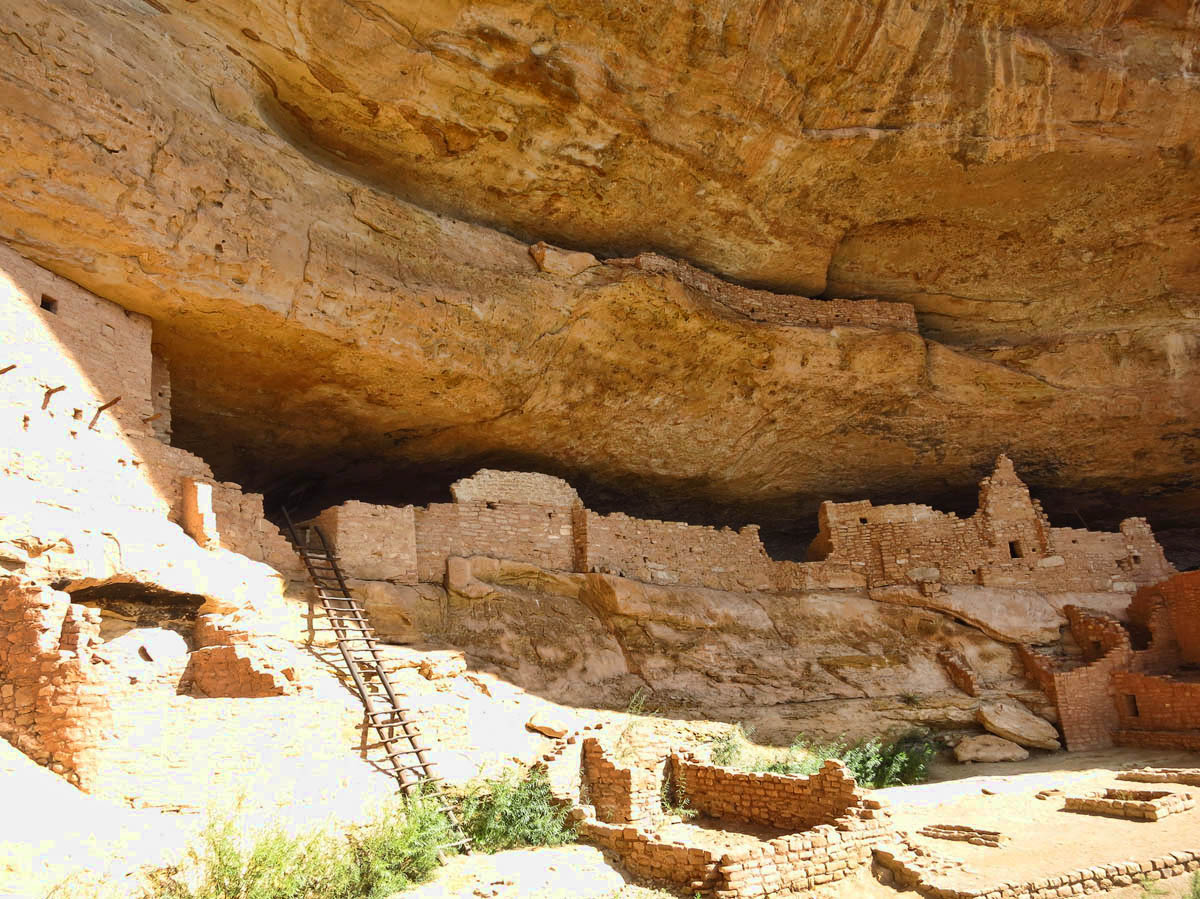 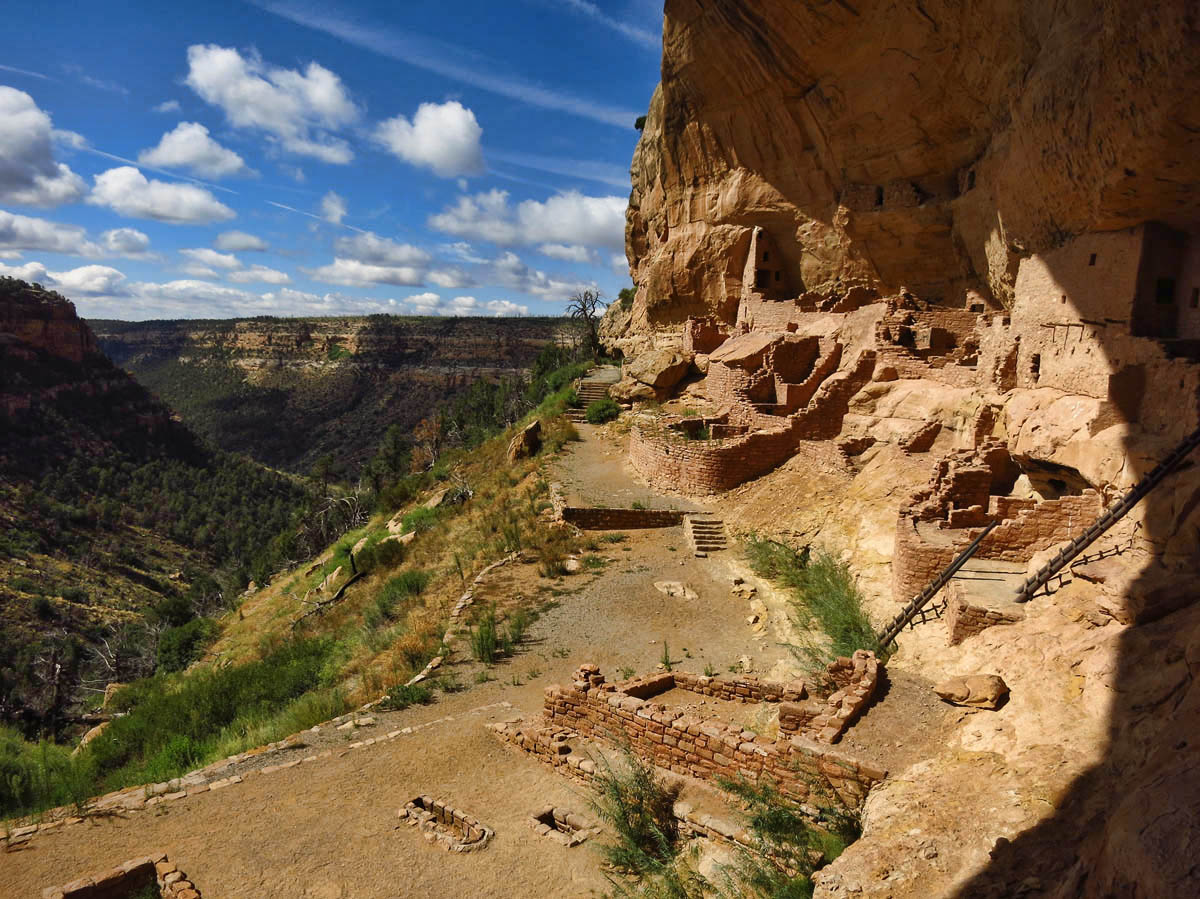 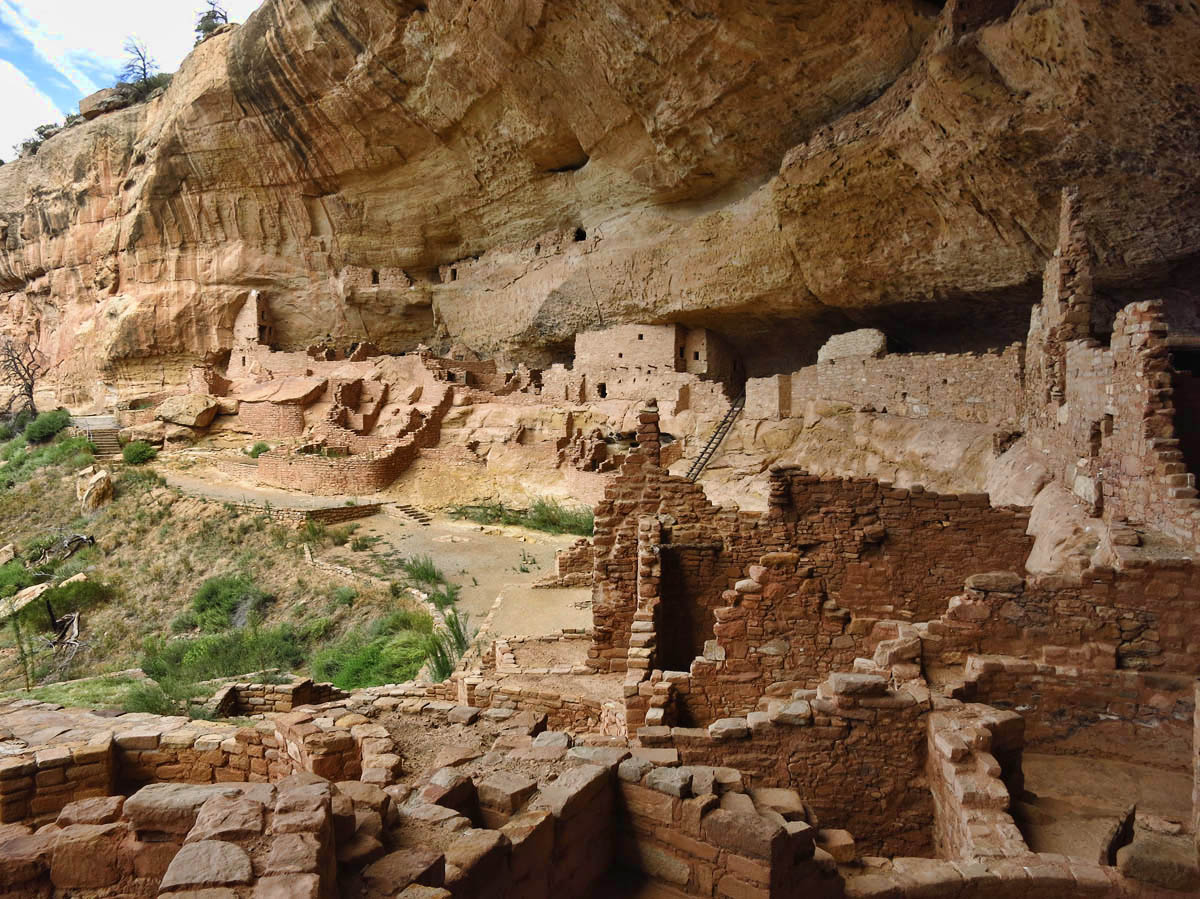 There is no indication why they moved down off the mesa, nor is there any clue as to why they left the area altogether 100 years later.   There are lots of myths about the Anasazi, that the entire civilization just “disappeared.”   However, they did not disappear, but rather migrated down into Arizona and New Mexico.   Tree ring analysis indicates there was a major drought around the year AD 1200.  So they could have moved into the alcoves to seek closer proximity to the water source, the seep springs within the alcoves.  It is also believed this drought of biblical proportions may have been a leading contributor for why they left the mesa altogether.

This side of the mesa also includes another self-guided tour, the Step House, where evidence of two periods exists side by side.  A restored replica of a pit house from AD 550 exists next to the later period cliff dwelling from the 13th Century.  This is another site that does not require an additional fee to enter, and there is a Ranger on duty to answer questions. 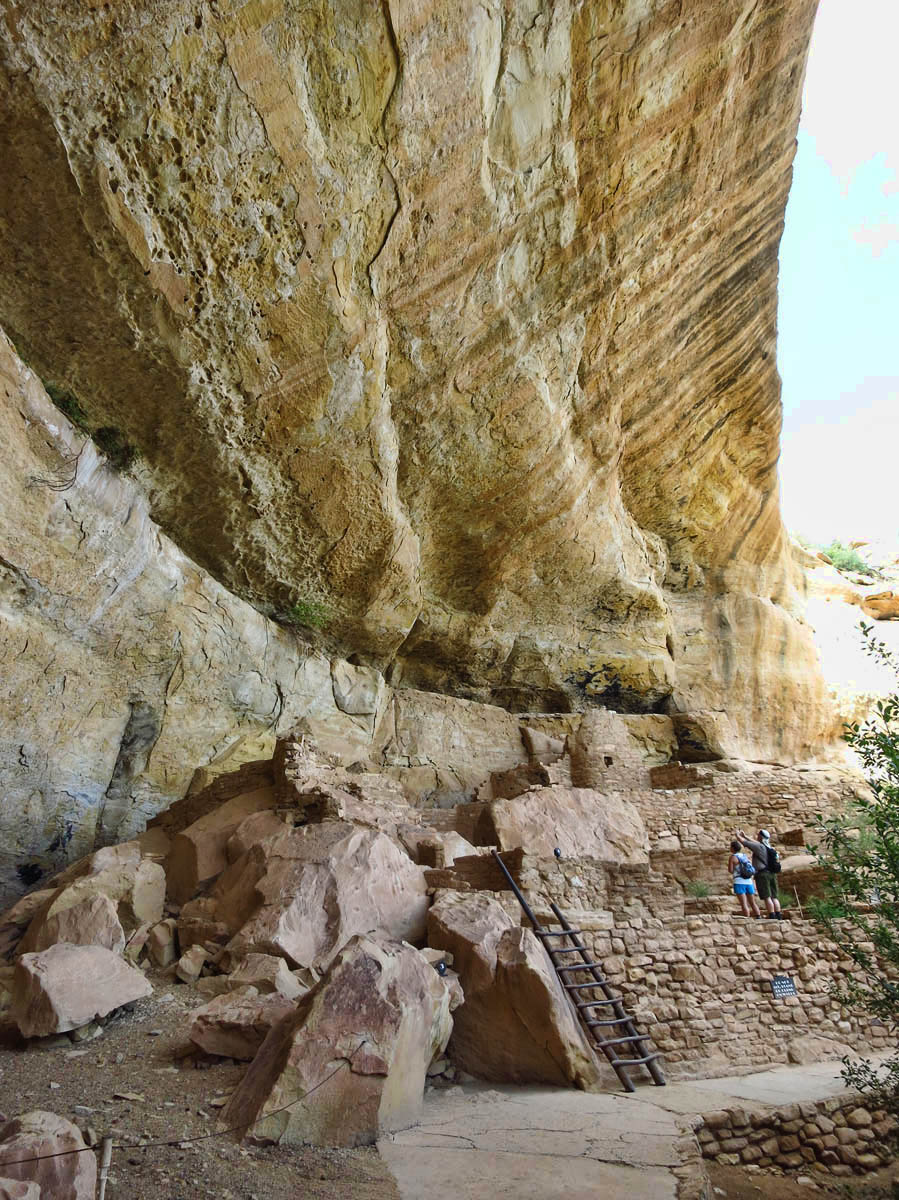 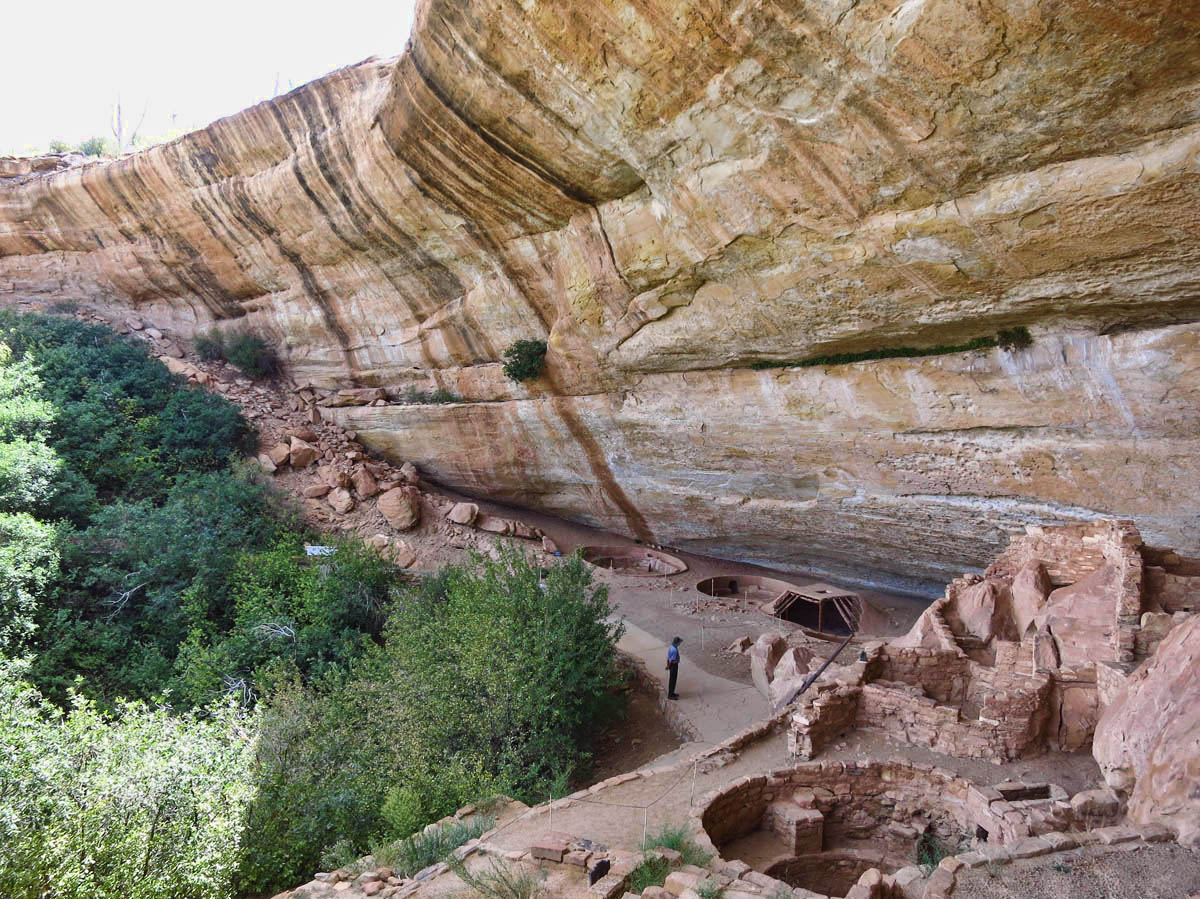 My most memorable moment of my time spent at Mesa Verde was during the Long House Ranger-led tour, when the Ranger had us all sit, theatre-style on a large original stone ledge beneath the alcove.  He told stories of family life believed to have taken place during the time of habitation…he talked of egress into the alcove via toe and hand holds, the collection and organization of firewood, and even the location and condition of some sacred remains of a four year old girl, found wrapped in a feather, beaded blanket and buried within one of the rooms near where we sat.  Then he asked everyone to get still.  No shuffling, no talking, no photo taking for two solid minutes of silence.  Good luck getting a crowd of 25 people to sit still for 10 seconds, let alone 120.  But on the heels of his story telling, he was successful.   He asked that we take this time reflecting on why we came to Mesa Verde, and what we would mentally take away from our time here.  The sounds of the chirping birds and chattering squirrels echoed off the back of the hard stone alcove wall.  I spent my two minutes pondering what it must have been like to be among the first to wake here, looking out over the canyon at daybreak. 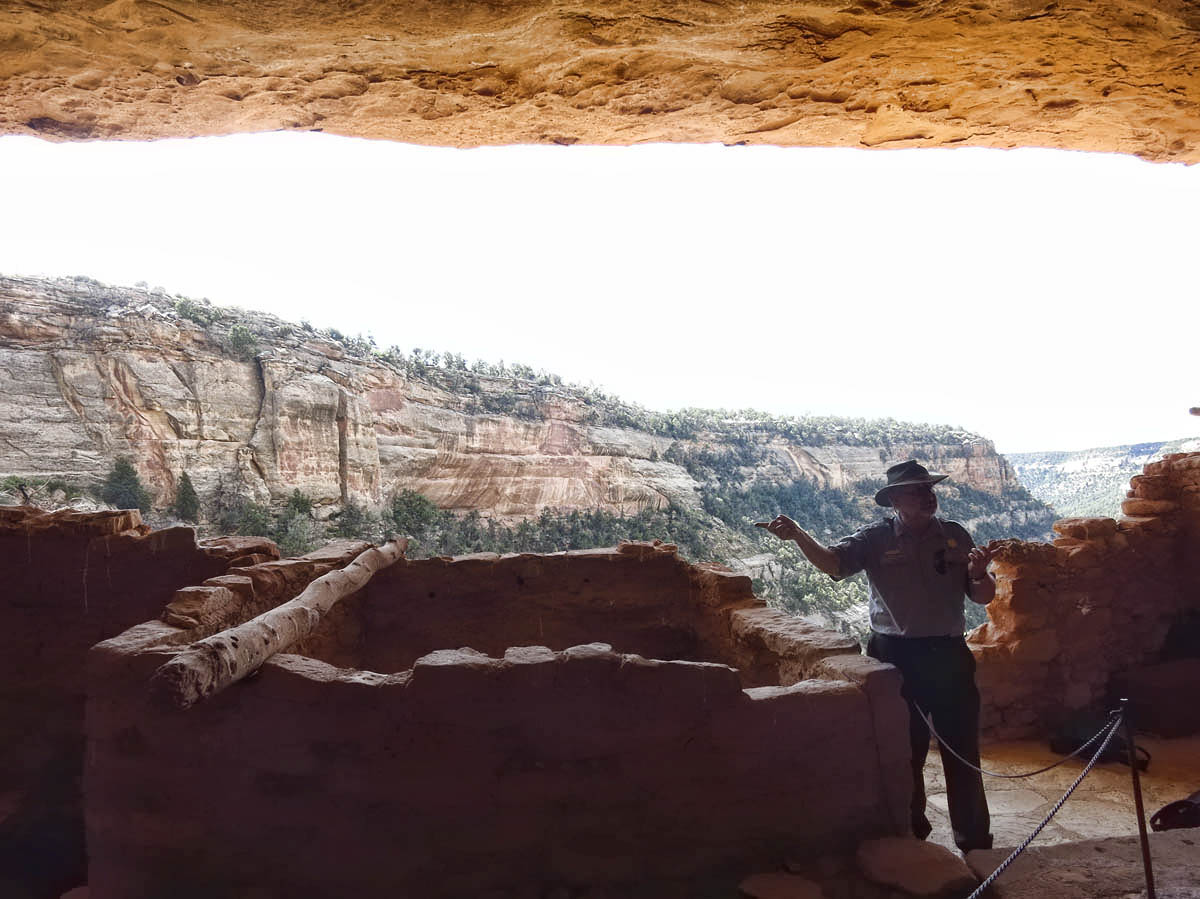 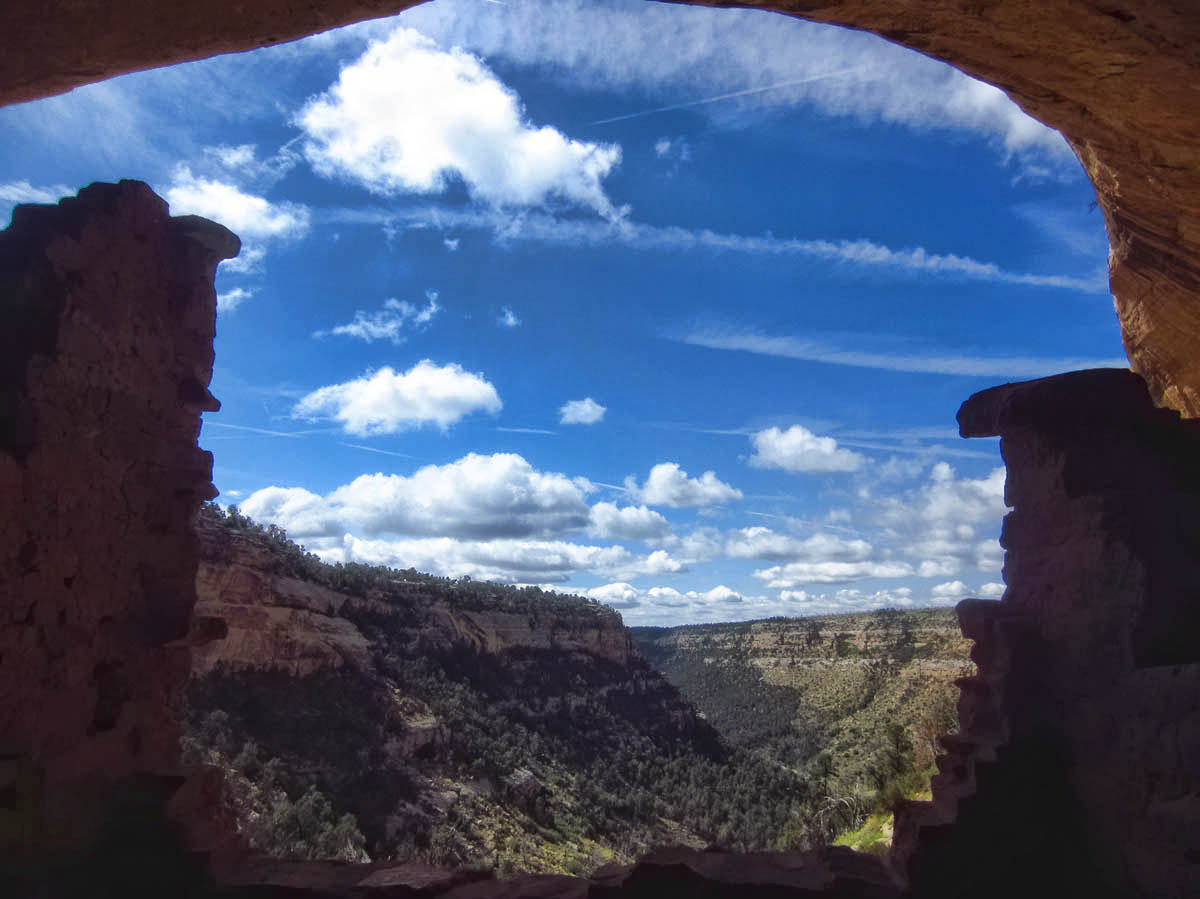 Looking out from the alcove, imagining what it was like to be a resident 700 years ago.

Then, he shared a recent meeting with a Hopi woman, a descendant of the Ancestral Pueblo people.  He asked what would she like for him to impart on the hundreds of tourists that walk through her ancestral home each day.  Her answer was “We didn’t disappear.  We’re still here.”

She then shared her belief that “Mans one purpose in life is to bridge the earth and the sky.”  That’s a purpose I can get behind… 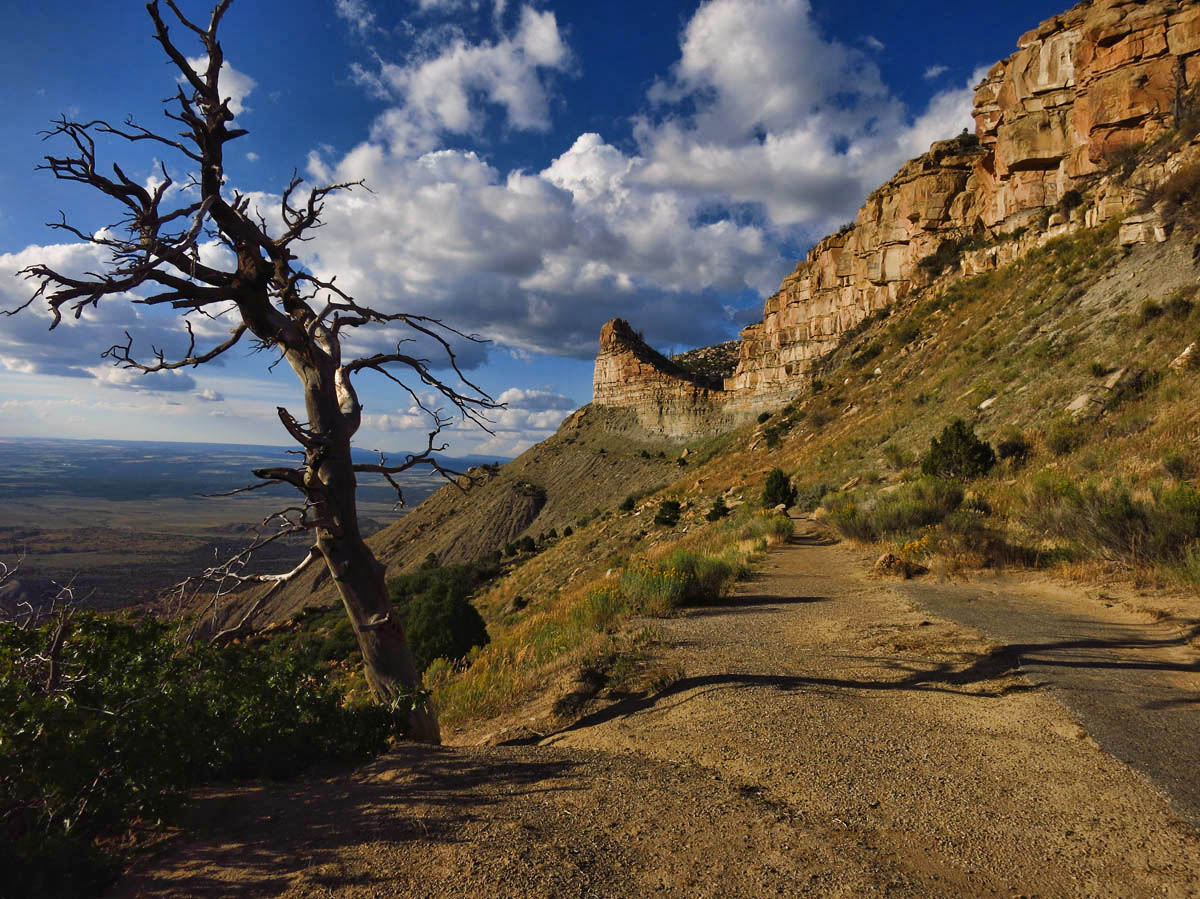 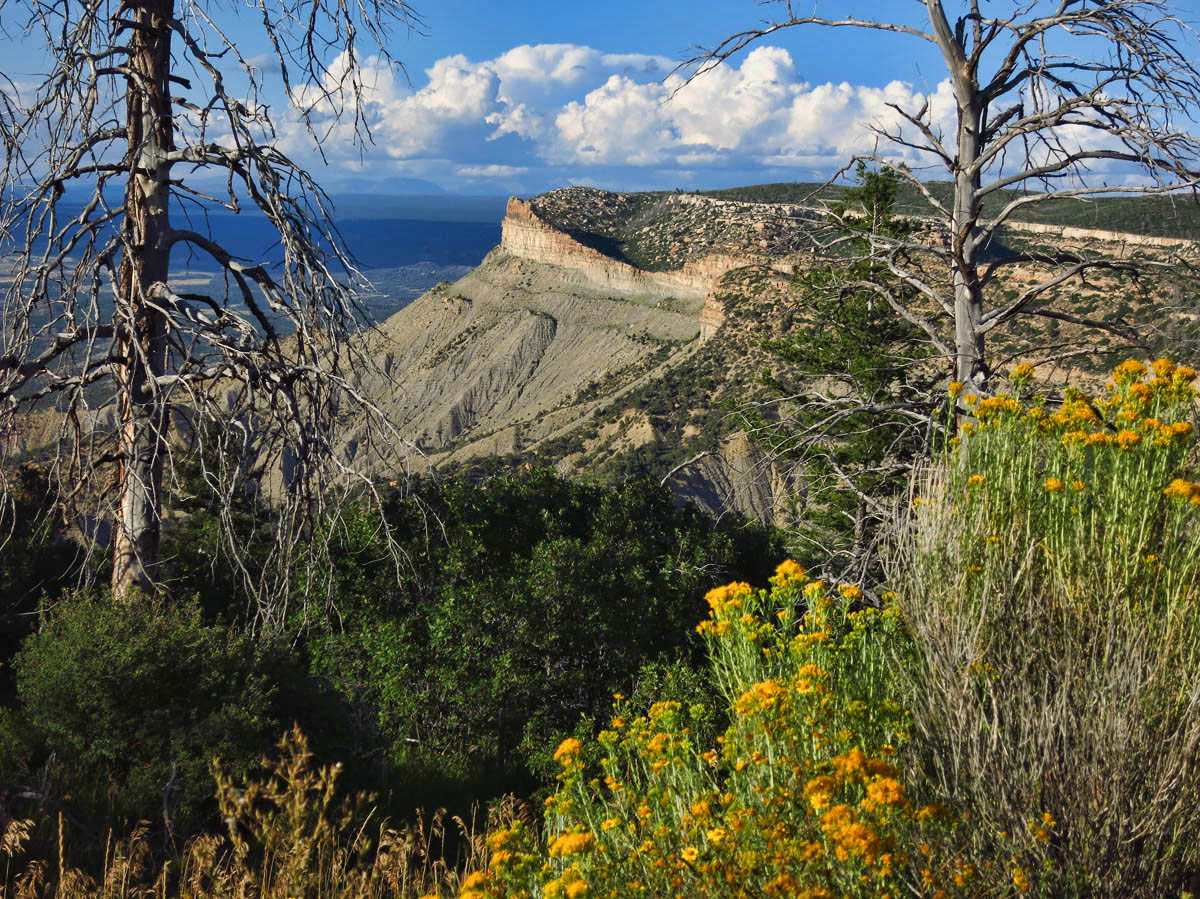 16 thoughts on “The Long and Winding Road to Wetherill”