I recently read an article about a man who has a “bucket list to go everywhere.”   The article claims he is the “Worlds Most Traveled Man.”   I am not that kind of checklist traveler…I don’t need to “go everywhere.”  But I do maintain lists of things I want to see, otherwise, I might never leave the internet.  😉   When it comes to an already well-developed list such as our 59 National Parks, I figure there is a good reason to use that list as a guideline.  These places have received the pinnacle of “Park” status, not “Monument, Seashore, or Reserve.” Only 59 of them are an official “Park.” So there must be something special there worthy of a list, right?  So I confess, while in southwestern Colorado, I took a slight detour to visit Mesa Verde National Park.  Not because I had any knowledge, let alone interest about the Ancestral Puebloan people.  Quite the contrary.   I just wanted to visit the National Park.

This is the second such checklist item in my life that opened my eyes wide to something I previously knew nothing about.  I admit to wanting to visit Antarctica to “tag the seventh continent.”  I left there spellbound by what I had seen.  I was literally swallowed up by the sheer magnitude of the life cycle that takes place there in spite of man’s egoistic existence.   Although on a much smaller scale, I experienced that same sort of epiphany in Mesa Verde. 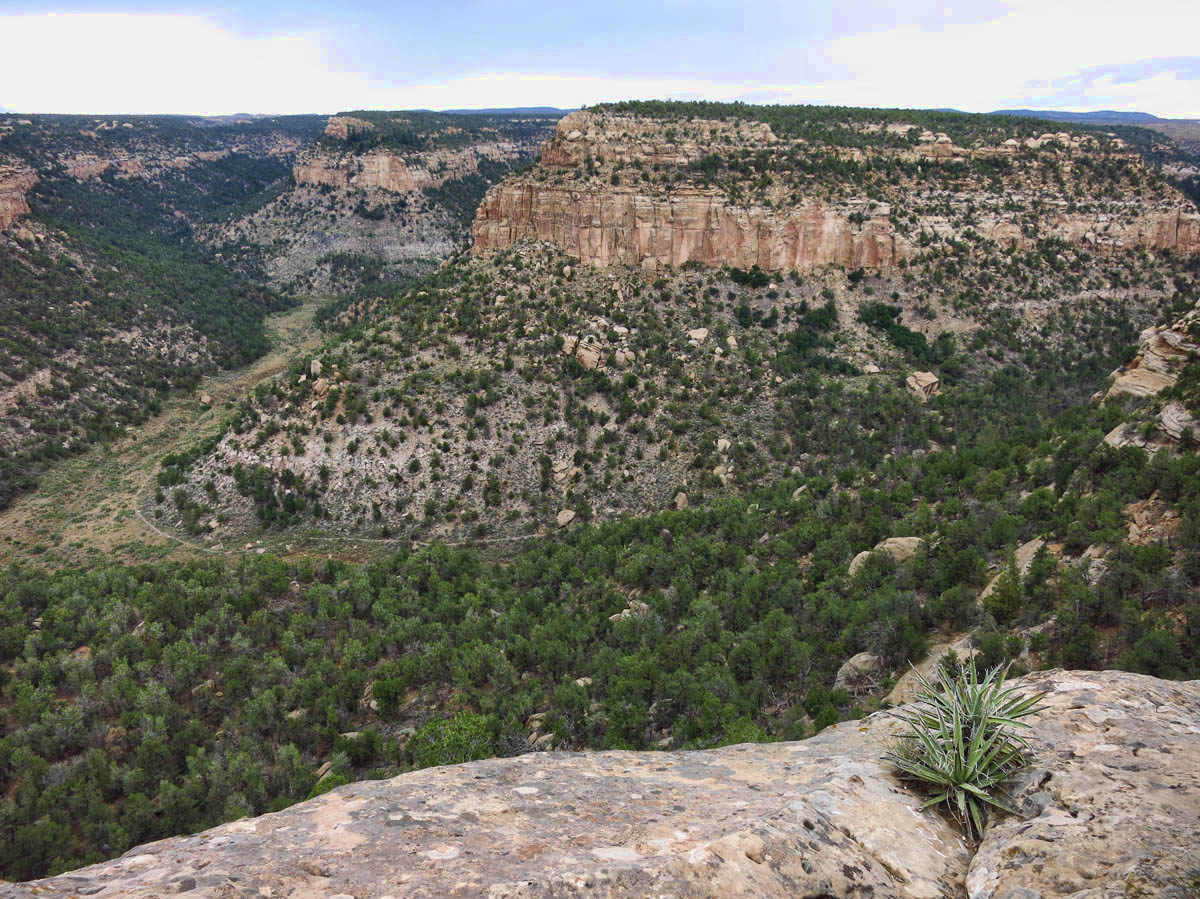 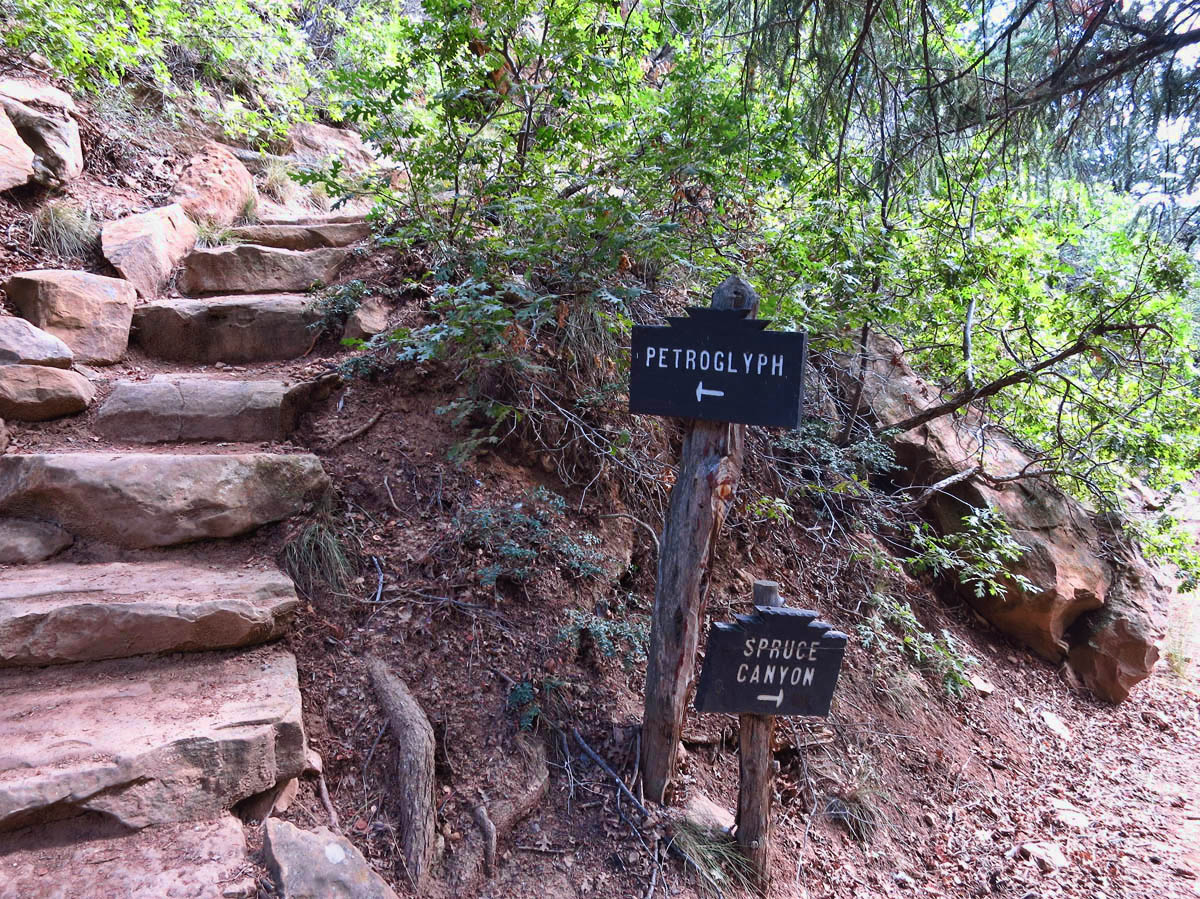 The Ancestral Puebloan people were believed to have lived in this area from AD 550 to 1300.  There are over 5,000 ancient architectural sites at Mesa Verde, 600 of which are cliff dwellings.  Around 40 of the 600 are visible from the park roads and overlooks.  These recessed cliffside dwellings were believed to be the last phase of their habitation, from AD 1200 to 1300. 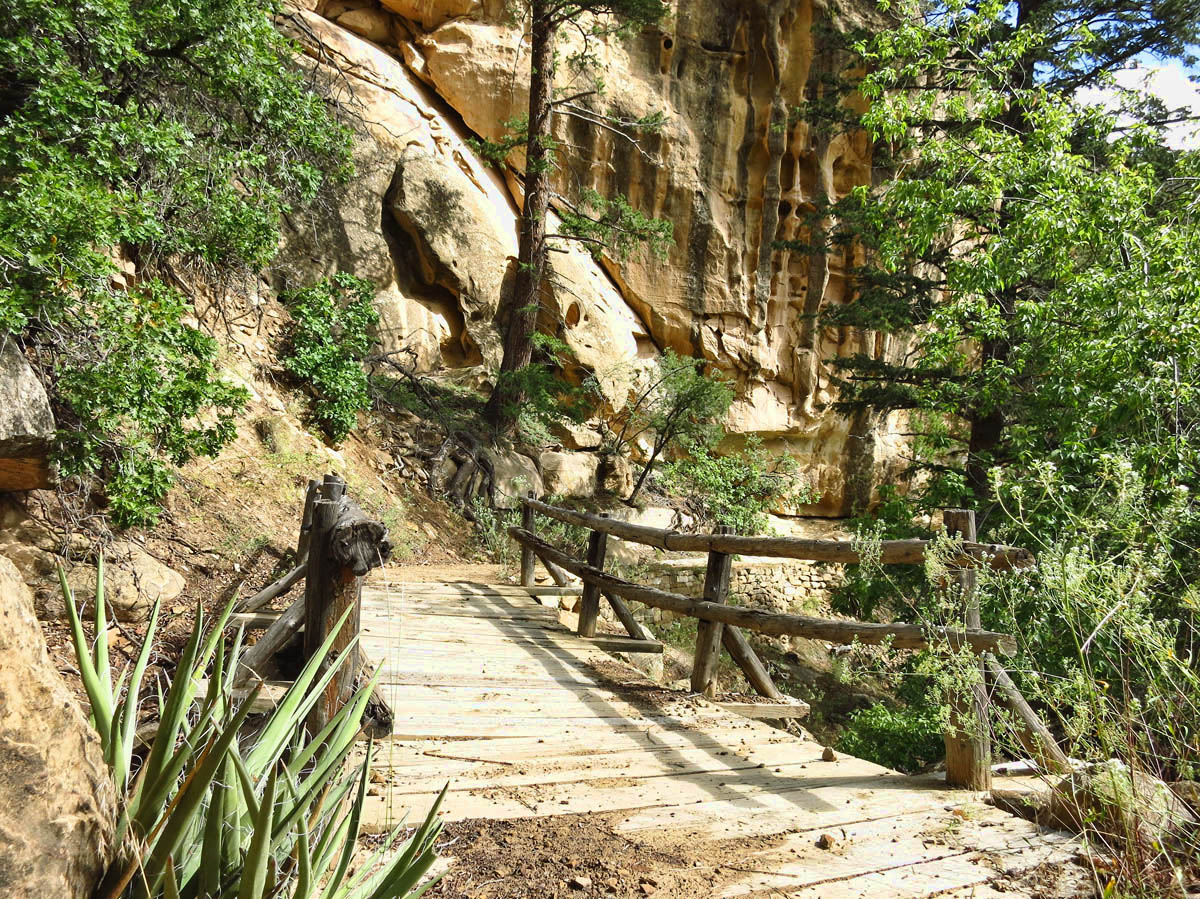 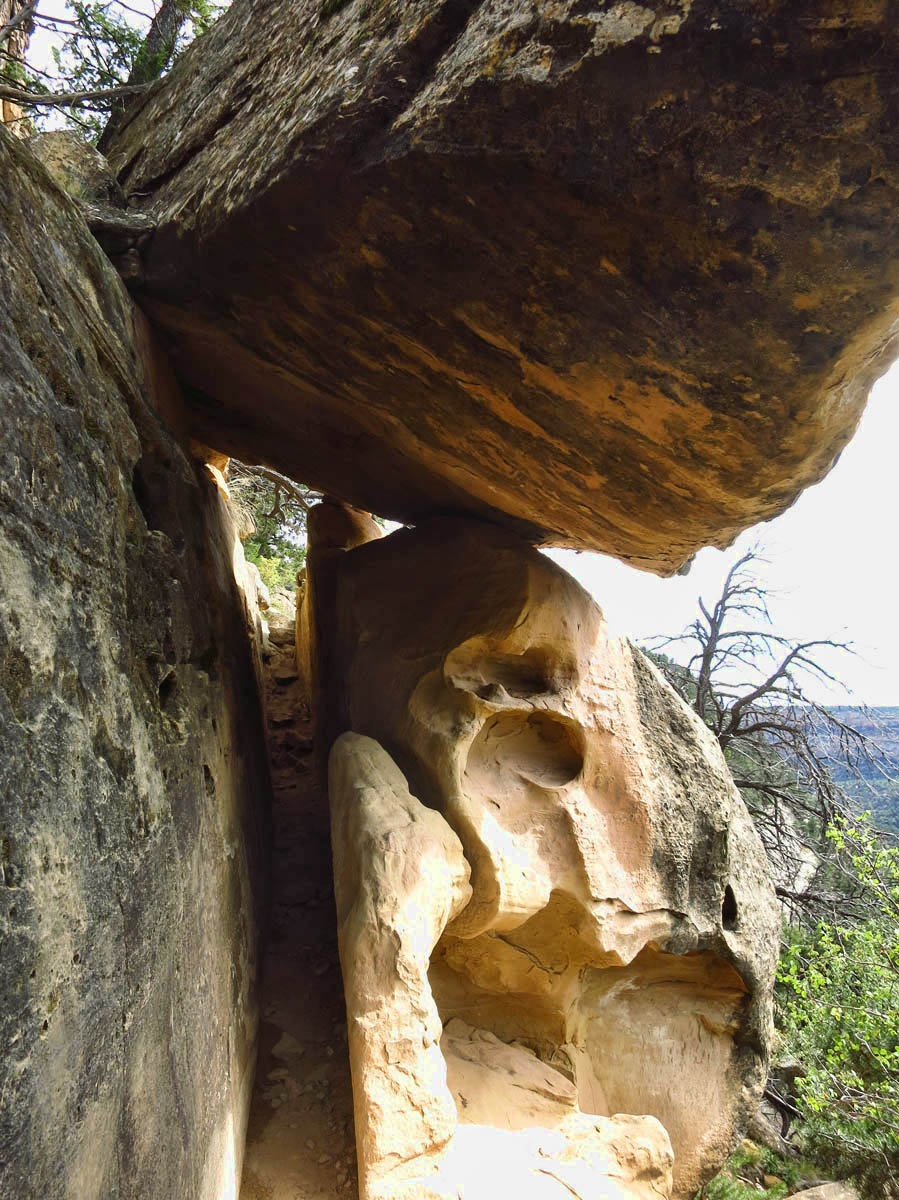 Yep, the trail goes through that crack!

This group of “ancients” has been more commonly known in the past as the “Anasazi,” but we were asked not to use that term, as it is a Navajo name which translates into “ancient enemies,” ergo the more PC term of “Ancestral Puebloans.”  A mouthful, eh?   We were also asked not to refer to the dwellings as “ruins,” as they are much in the same condition today as they were 800 years ago, and not “ruined” at all. 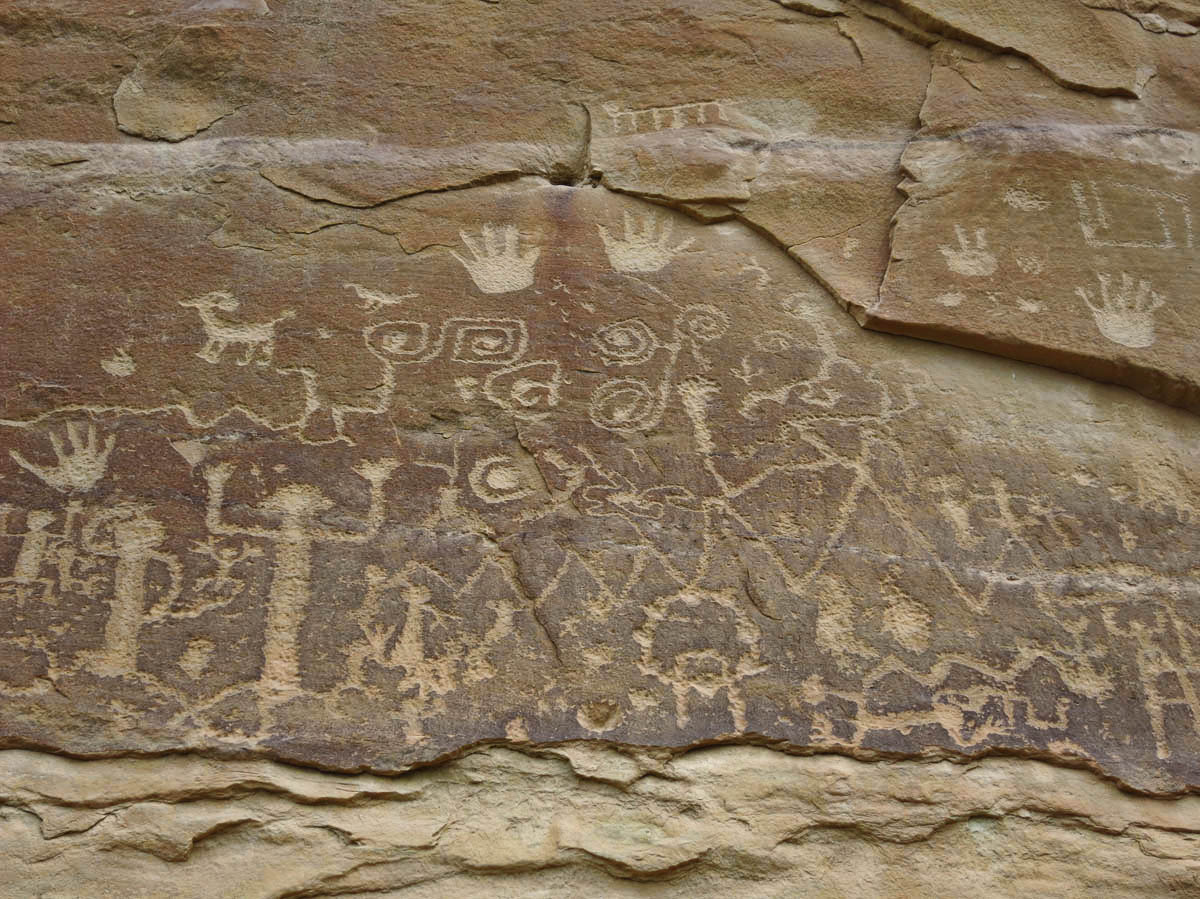 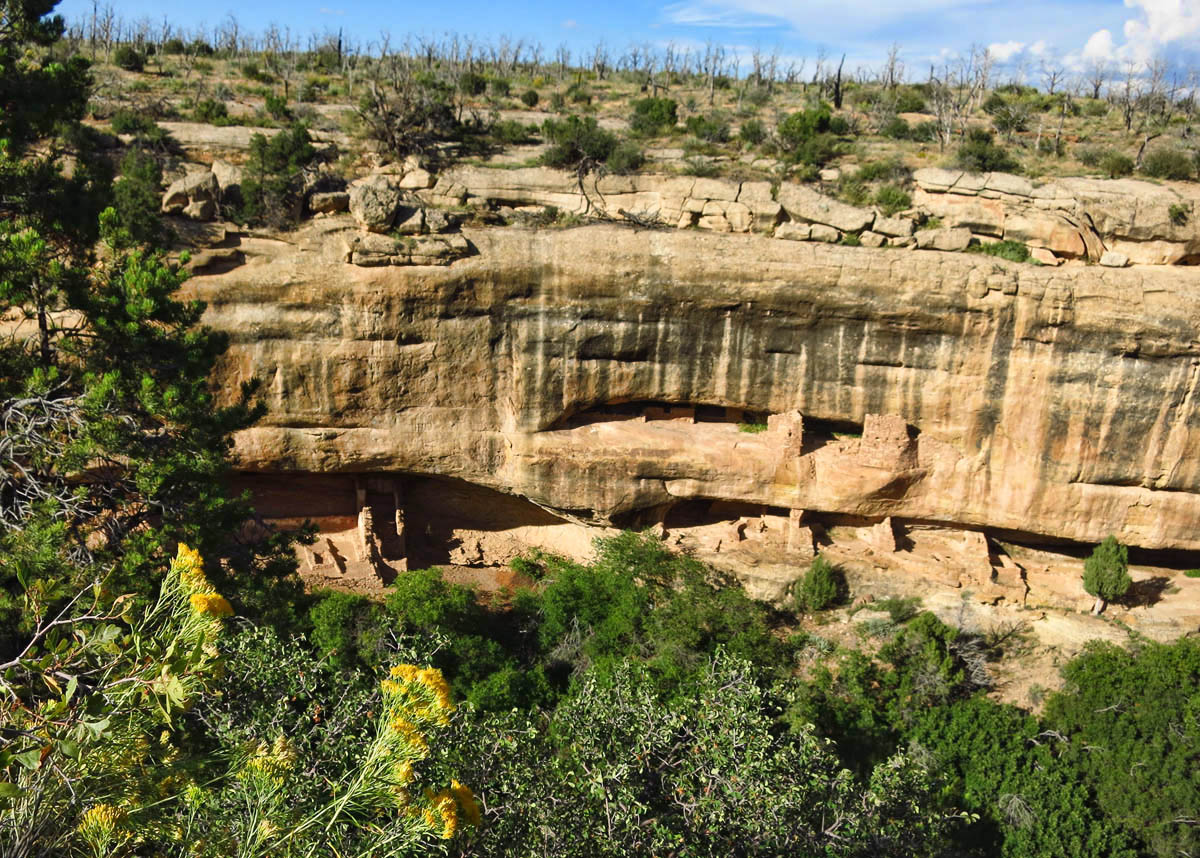 Looking across the canyon, it is possible to see many dwellings in the natural alcoves.

I had been watching the weather, as the high temperatures in the arid southwest region could make “no hookups” in the National Park an unpleasant experience, not to mention walking around on sun baked rocks all day.   But there was a cold front on the way, promising cooler temperatures during my stay.  There would also be rain showers, but hopefully the increased clouds would mean fewer crowds. 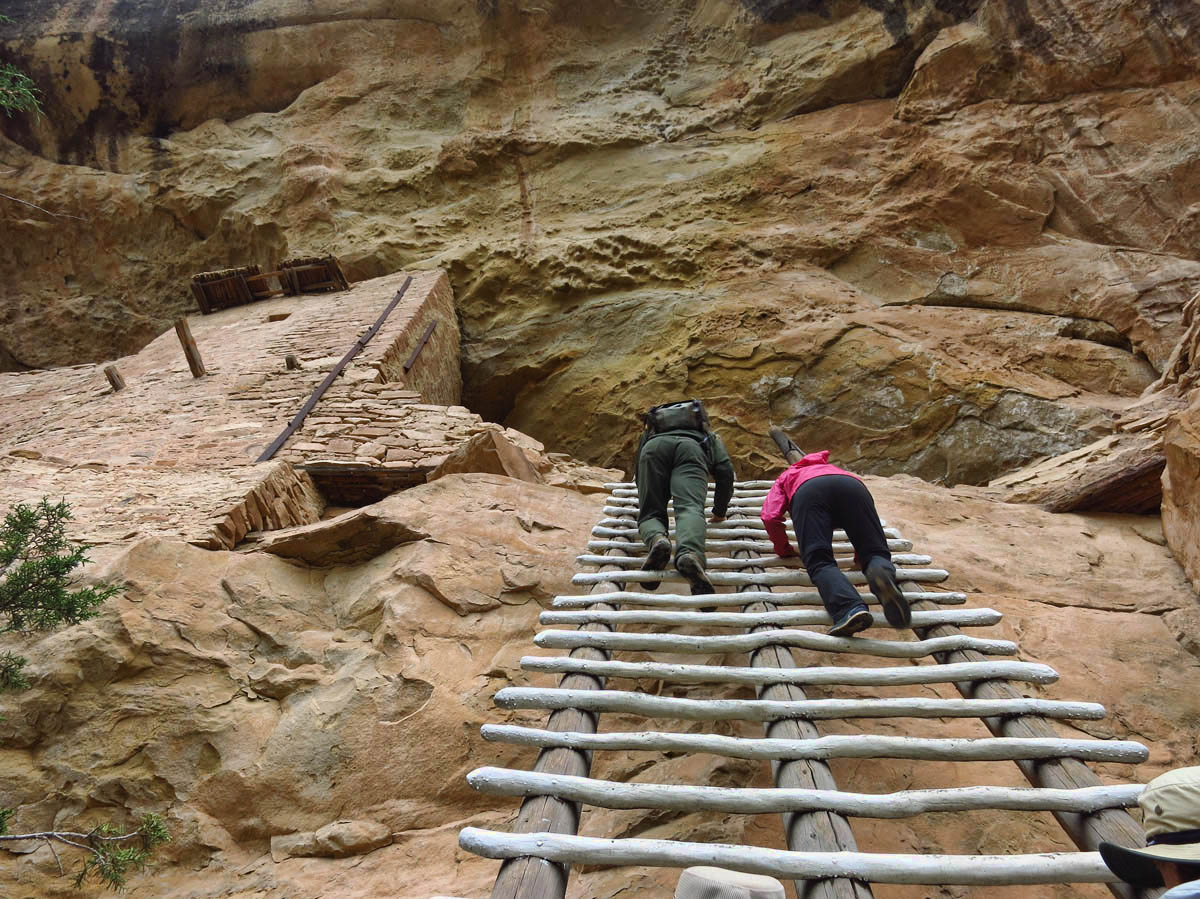 Thirty-two foot ladder constructed back in the 30’s must be climbed to access Balcony House. 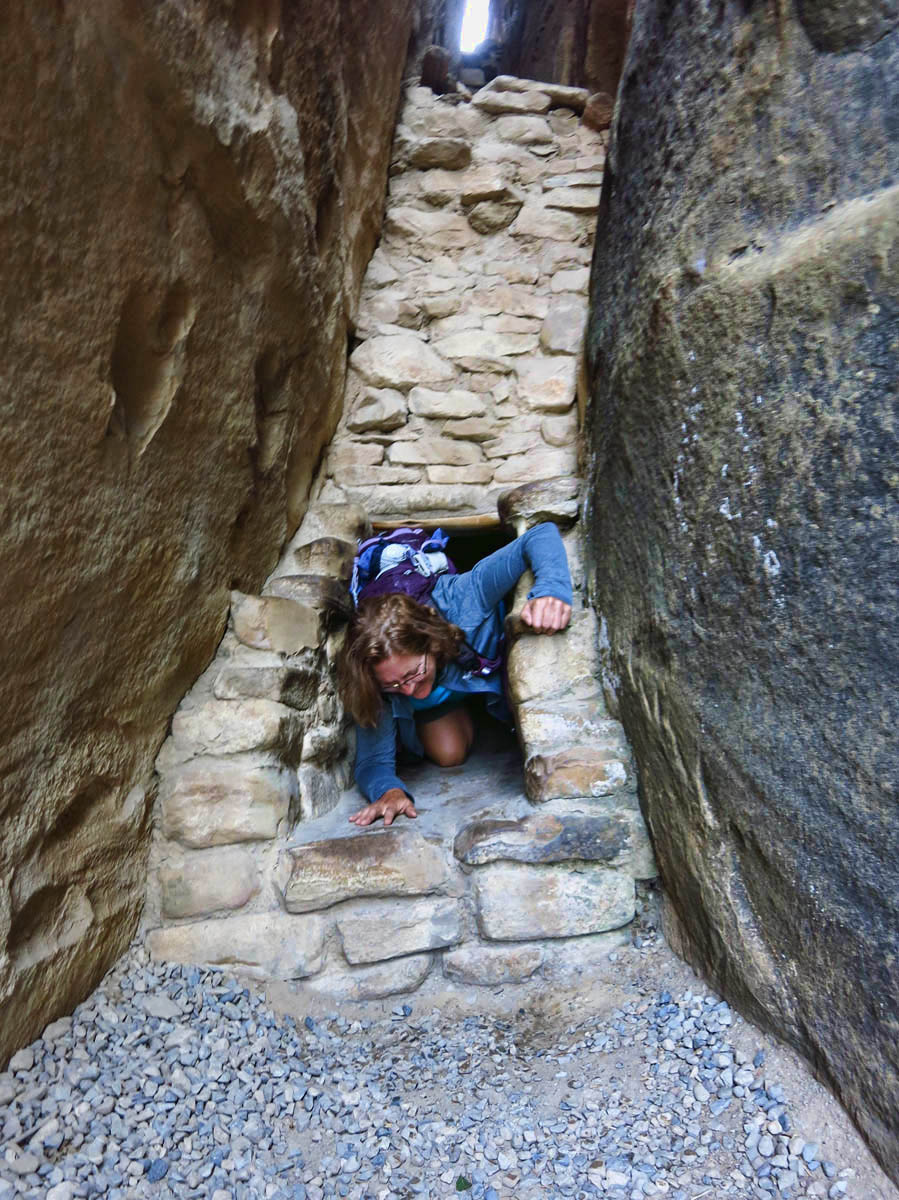 Though this 12′ x 18″ tunnel is now at the exit, it was believed to be the only entrance to Balcony House.

My first stop after pulling off the highway from Durango is the huge, modern, impressive Visitor Center and Research Center.  It is teeming with activity.  My turn comes up, and I get a volunteer who is also a solo full timer, so immediately we strike a bond and swap stories.  She tells me about the three ranger-guided tours, and also recommends some of the self-guided activities in the park.   The three main sites can only be visited on a ranger-led tour, but they are only $4 per tour.  At that price, I book all three, and figure it is not much to lose if I decide after the first one that it’s not for me. 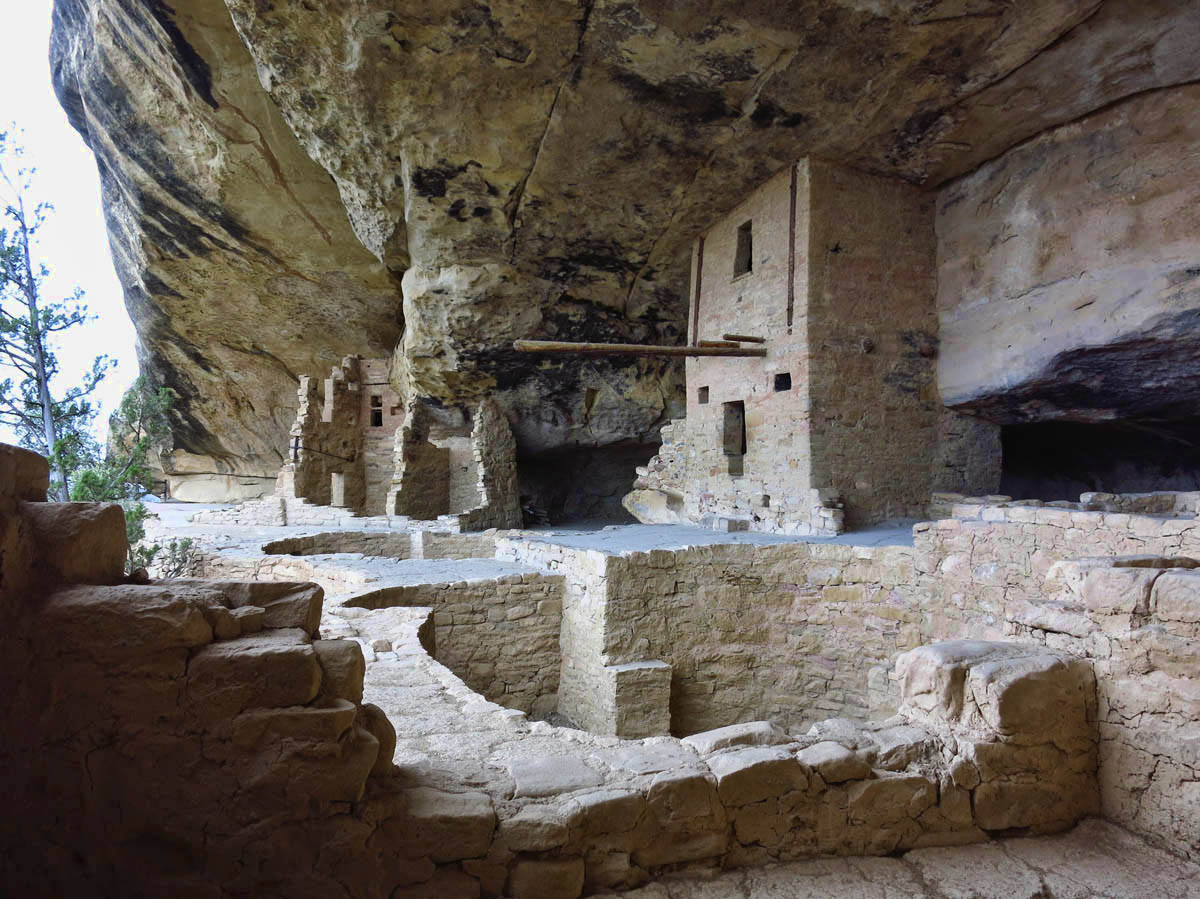 Balcony House has 38 rooms spread over 3 plazas, or courtyards. 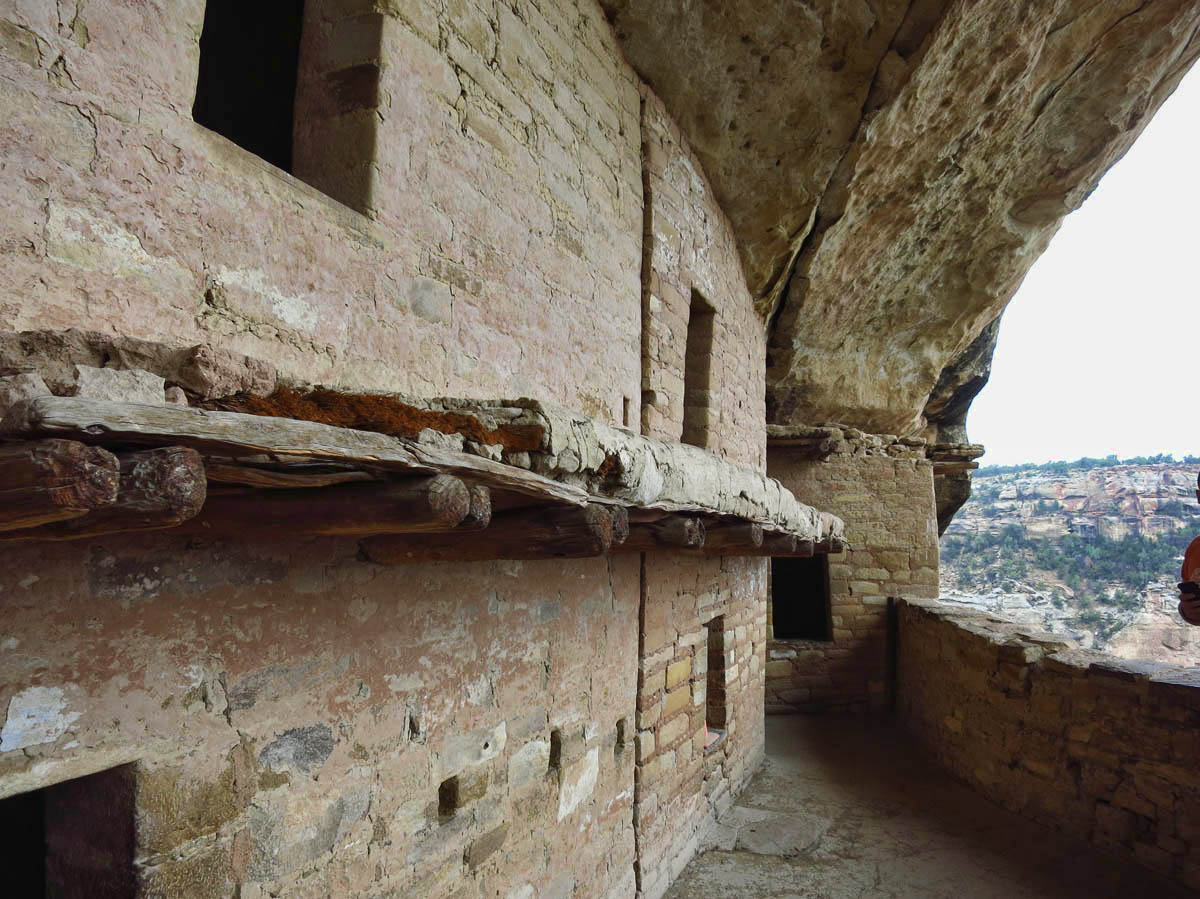 Original wood with tree rings dating back to AD1200, believed to be part of what was a “balcony,” enabling dwellers to walk from second floor room to room.

She recommends Balcony House as the first tour of the day, because that is a smaller site, and it gets more crowded as the day goes on.  This is their most “adventurous” tour, and it comes with a long list of restrictions.  Can I climb a 32 ft ladder without freezing from fear of heights?  Can I crawl through a 12′ long by 18″ wide tunnel with no fear of claustrophobia?  There are replicas in the Visitor’s Center, just to be sure.  Check and check.   (Odd that there was no mention of the 60 ft rock face you must scale to exit the site!)  I book the larger, most popular Cliff Palace tour immediately thereafter, and book the more remote Long House tour first thing the following day.   She directs me up the long hill, four miles to the Morefield campground. 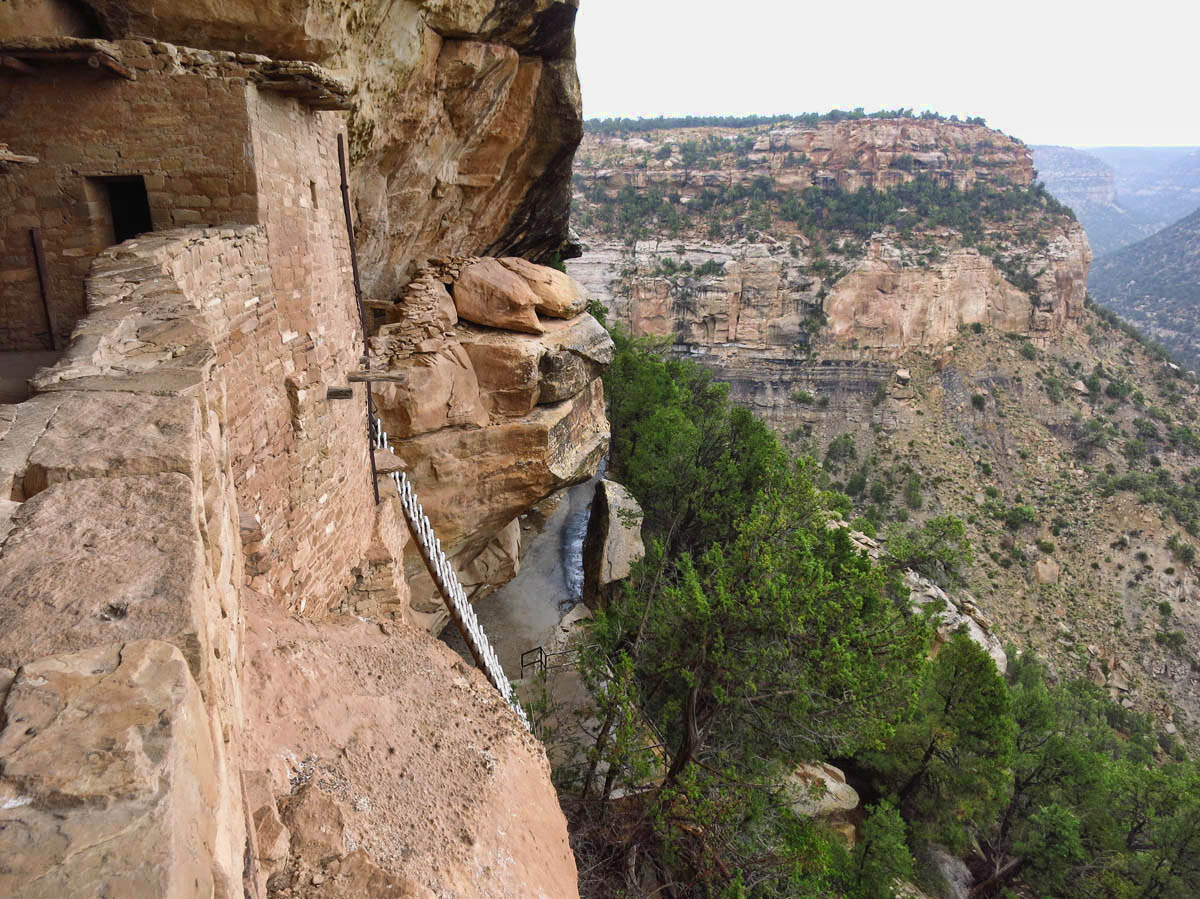 Looking down on the 32 ft ladder from one of the balconies. The dwelling is 600 ft above the canyon floor. 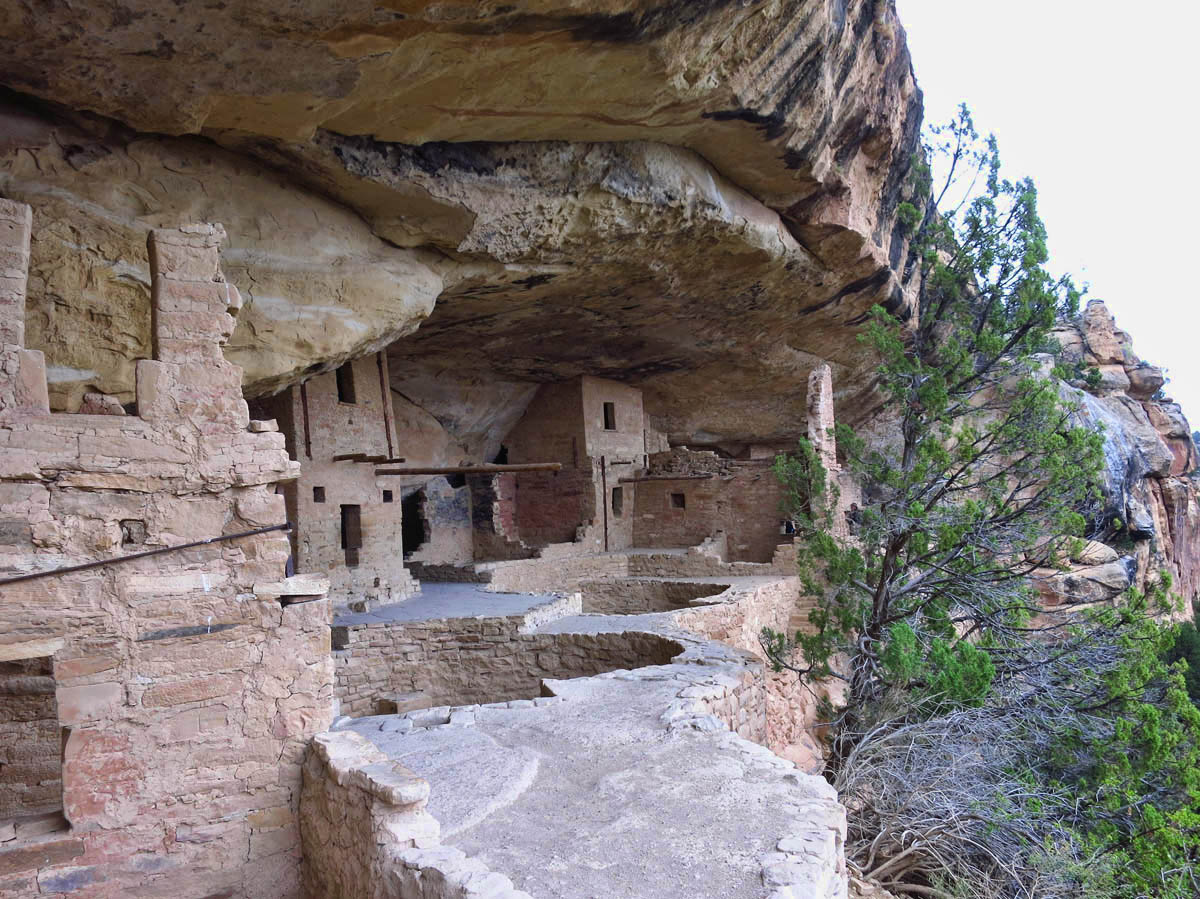 Balcony House only had 2 kivas, constructed side by side in the center of the house. 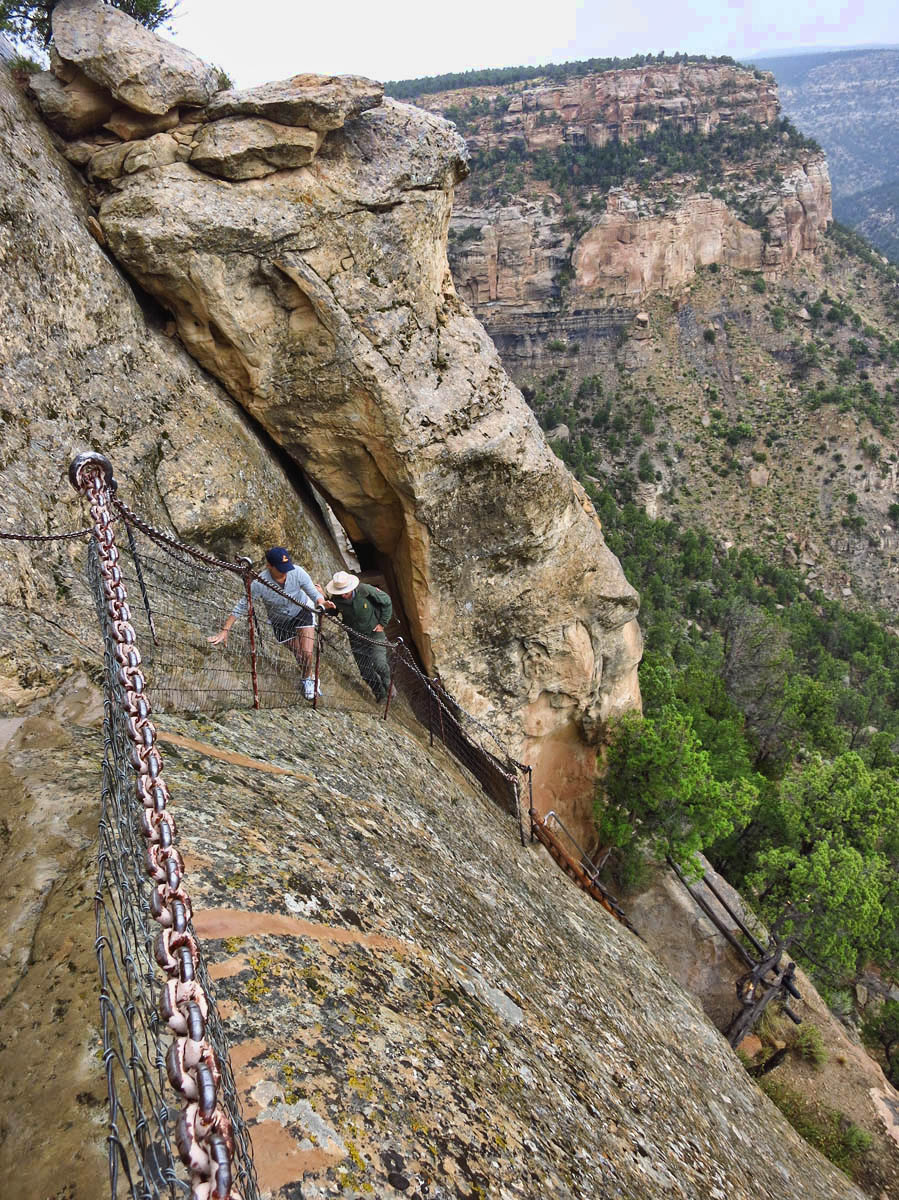 At the campground, there are free shower rooms with lots of hot water, a nice big Laundromat with wifi, a General Store, a cantina, and a gas station selling both gas and diesel.  There should be.  For the ridiculous price of $29 a night for a campground with no hook-ups, there should also be a free car wash included!   But it’s a matter of “location, location, location,” as the park sites are another 10 miles further up the road, and 4 miles into the park is as close as an RVer can get.   I find a nice, secluded spot on the Walpi loop, the most wooded loop in the campground.  I recommend this loop, as it has several sites surrounded by short trees, tall enough for privacy, but not too tall to block the solar panels. 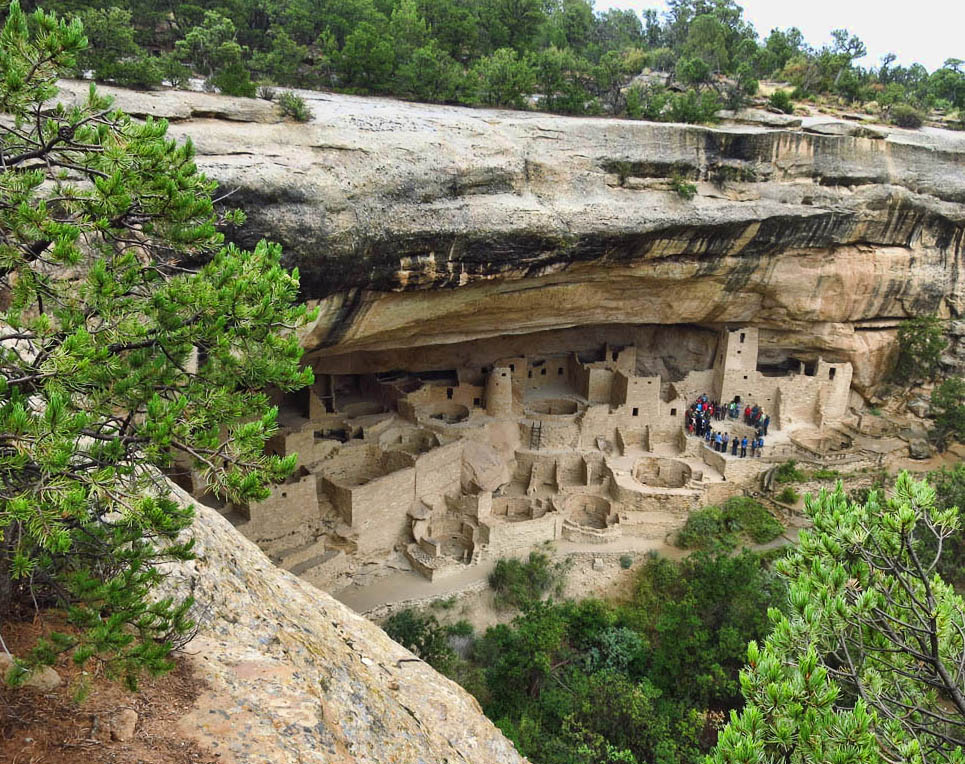 Overlooking Cliff Palace, waiting for next tour to start. (Note circle of tour ahead of us around Kiva for size perspective.) 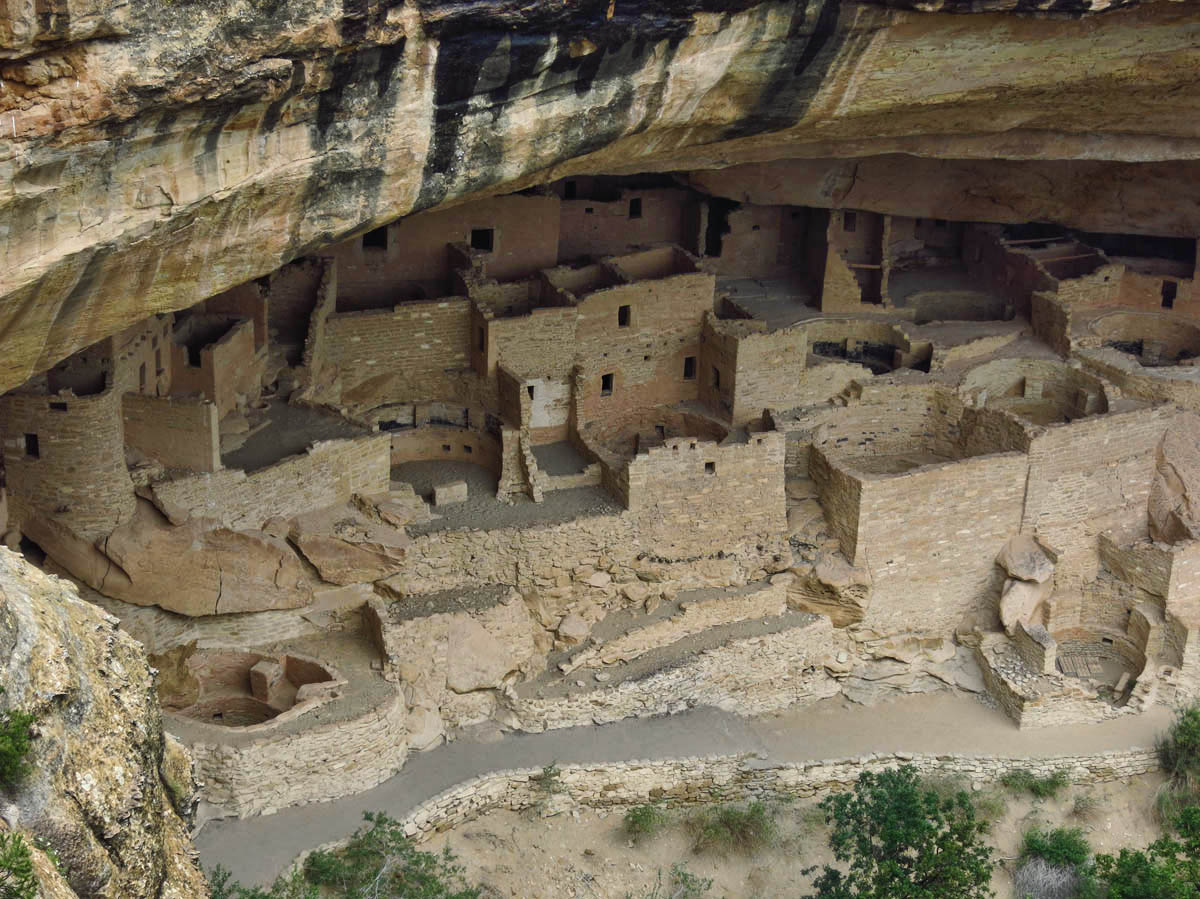 The architectural sites are concentrated on two different Mesas, Chapin and Wetherhill, separated by the deep Navajo Canyon.  Of the two mesas, Chapin sees more activity, with an architectural museum full of period artifacts, a 25 minute video, and impressive dioramas showing the phases of the Puebloan people, from first initial pit houses, all the way up through the migration from the cliff dwellings.

I spend my first day in the park exploring Chapin Mesa, touring three cliff dwellings, visiting the museum, driving the scenic loop, hiking a five mile loop down into Spruce Canyon and to the Petroglyphs.  It was a full day! 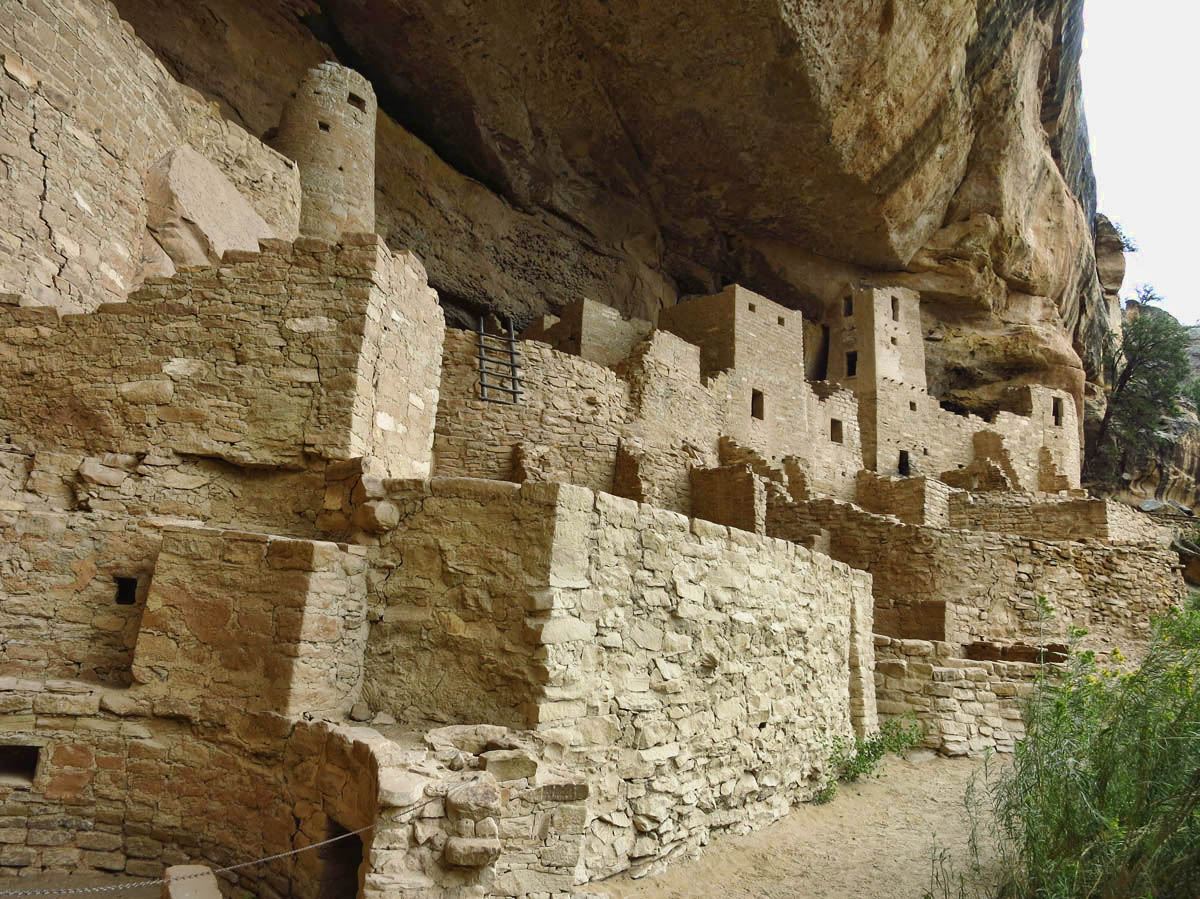 There are round towers as well as square towers in the dwelling. 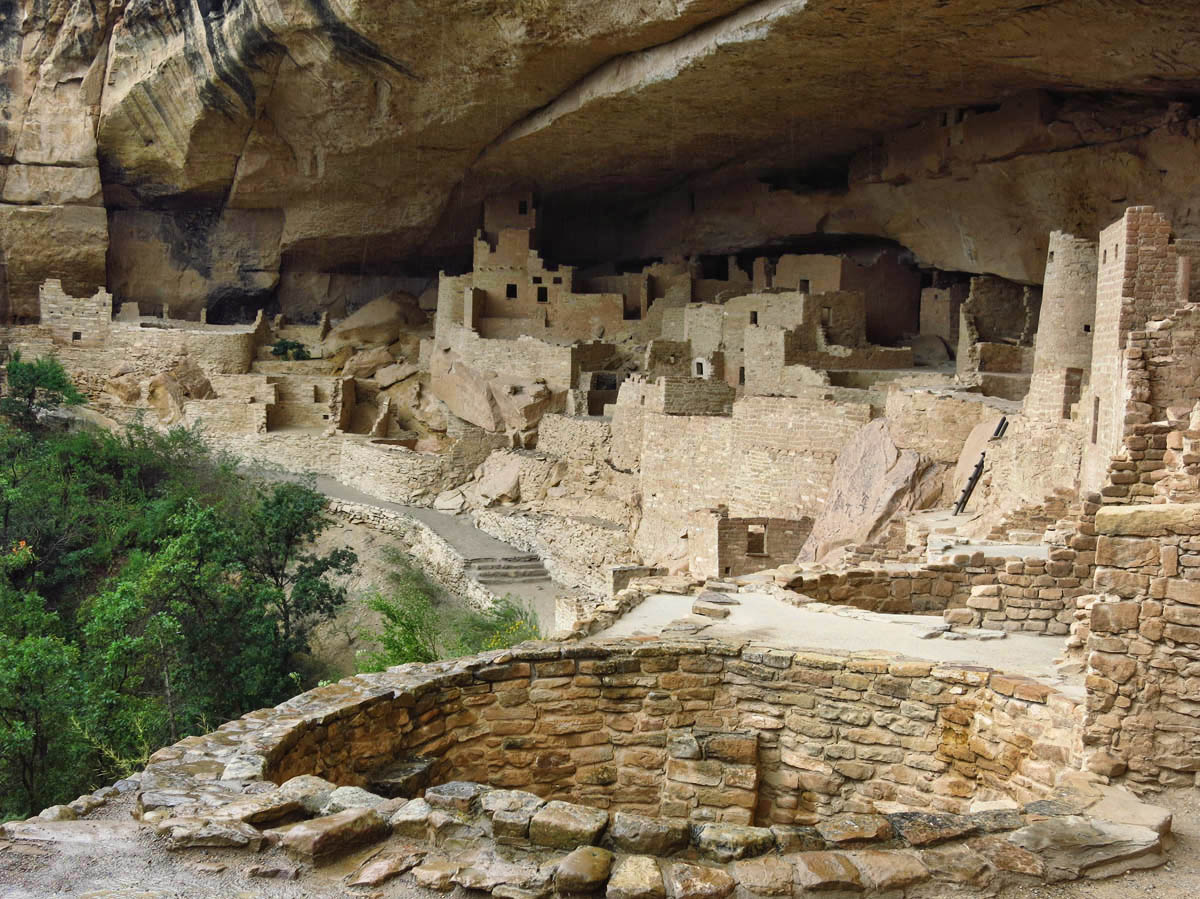 Overlooking one of the kivas, which were great architectural fetes for their time, with ventilators and tunnels.

My first tour of the day, Balcony House, considered the most “adventurous” in the park due to the 32 ft ladder and tunnel that must be navigated to access the site, will be a wet one, as the rains are steady.  But this works in our favor.  The Ranger tells us he typically as 50 people for this tour, whereas there are only 10 of us.   And the rain doesn’t really matter much once we get to the site, as the alcove is dry.   The Ranger tells us this is his favorite tour, as it is considered the most “intimate” of all the tours.  We will be accessing different rooms, whereas the larger Cliff Palace is more of a “drive by,” and since we are such a small group, we will see even more. 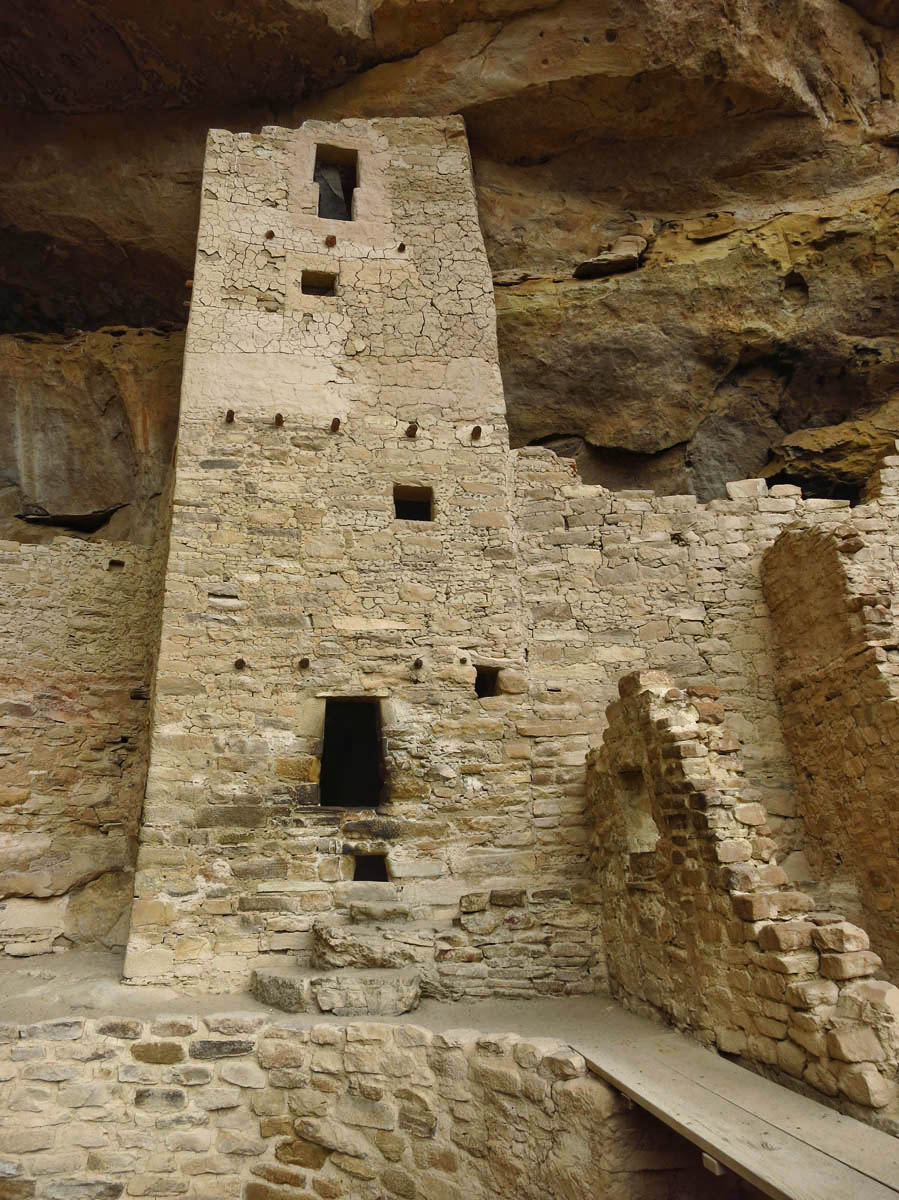 Tour participants are told not to touch the rocks, because this is what happens…note black oil stains around window in the Painted Tower. But we can touch this one window, in order to look up in the tower… 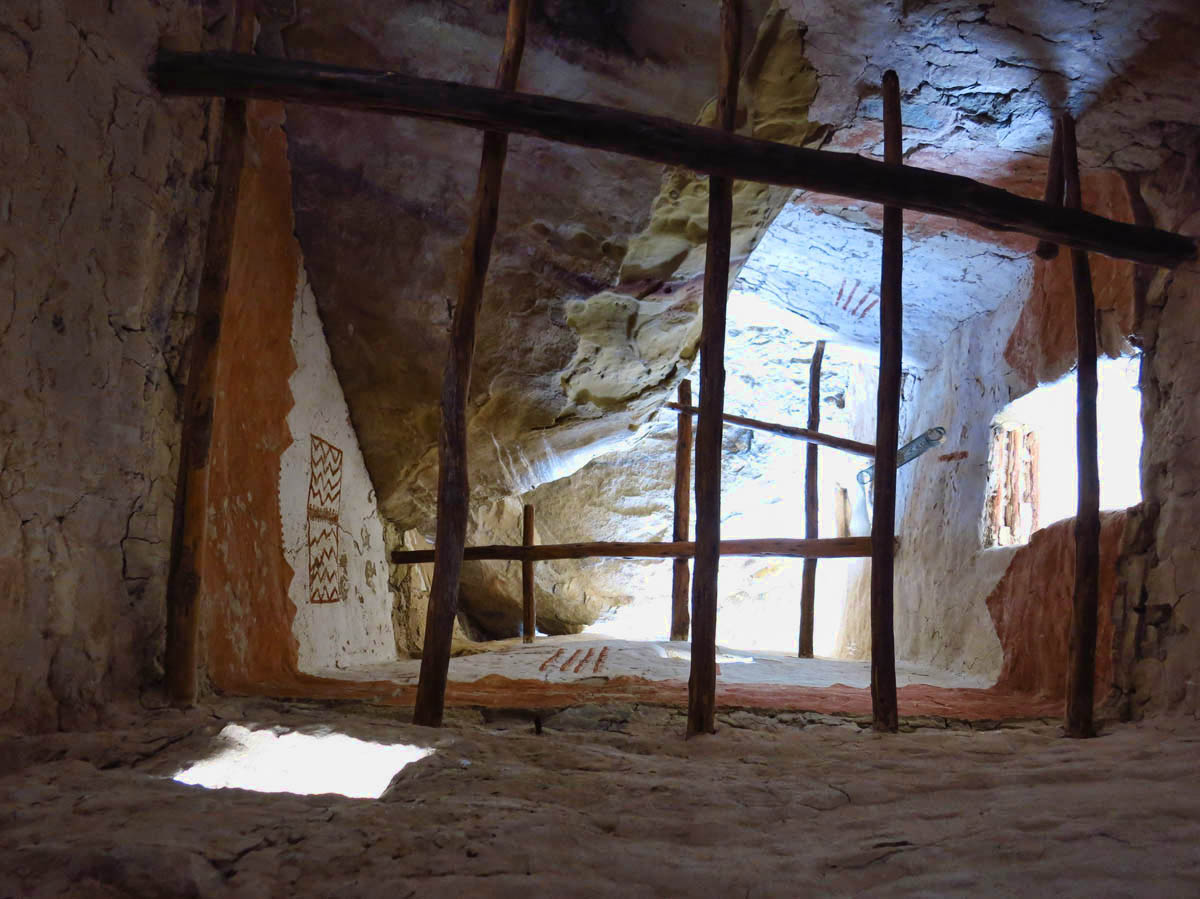 A view on my back, looking up into the Painted Tower. Note painted plaster is original.

The Cliff Palace tour is much more crowded in spite of the rain.  It is the most popular site in the park, as it was the largest of the cliff dwellings with over 150 rooms.  With its 23 kivas, it is thought that Cliff Palace was a social, administrative site with high ceremonial usage.  These perfectly round, subterranean kiva structures were believed to serve multiple purposes, from religious ceremonies to supporting family life in an underground environment that maintained a consistent 50 degrees year round, requiring only a small fire in winter.  Cliff Palace was believed to be home to 100 to 120 people. 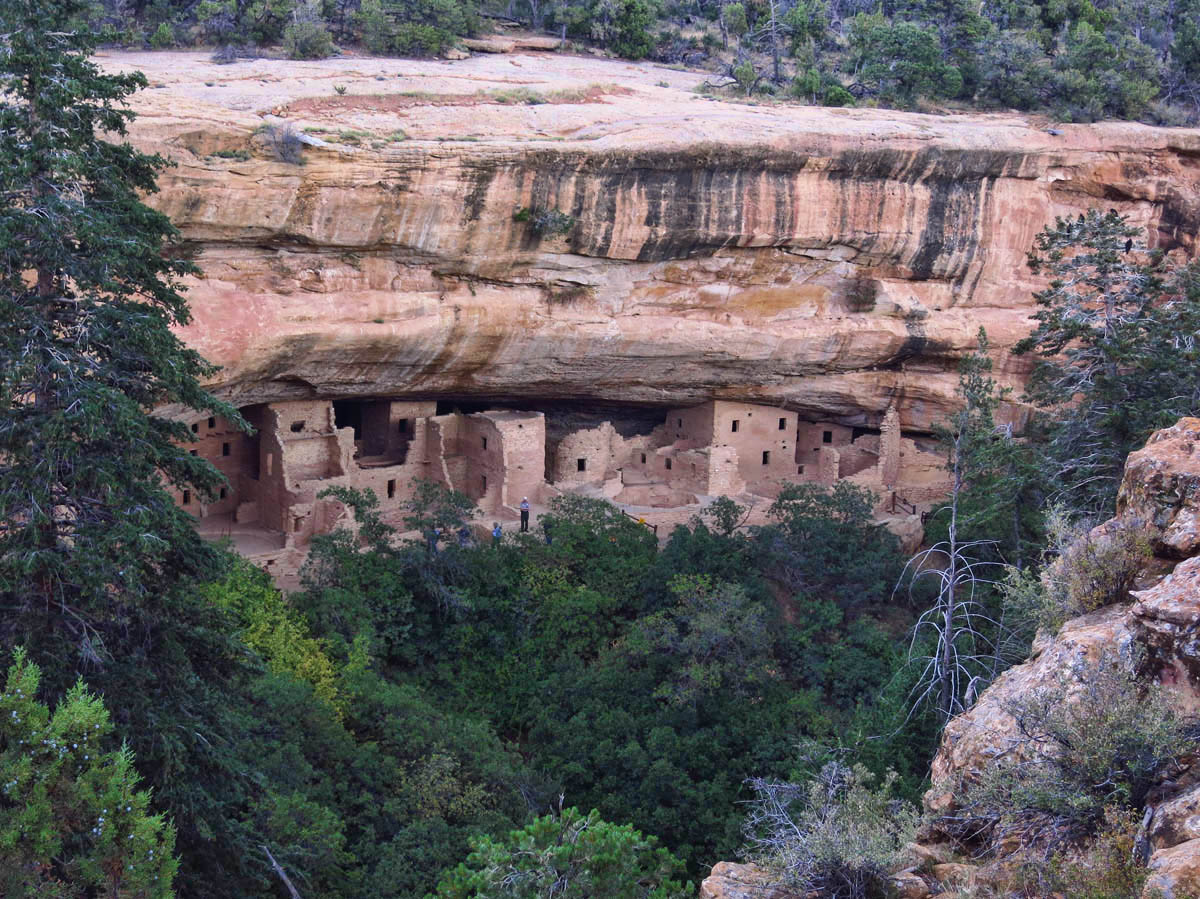 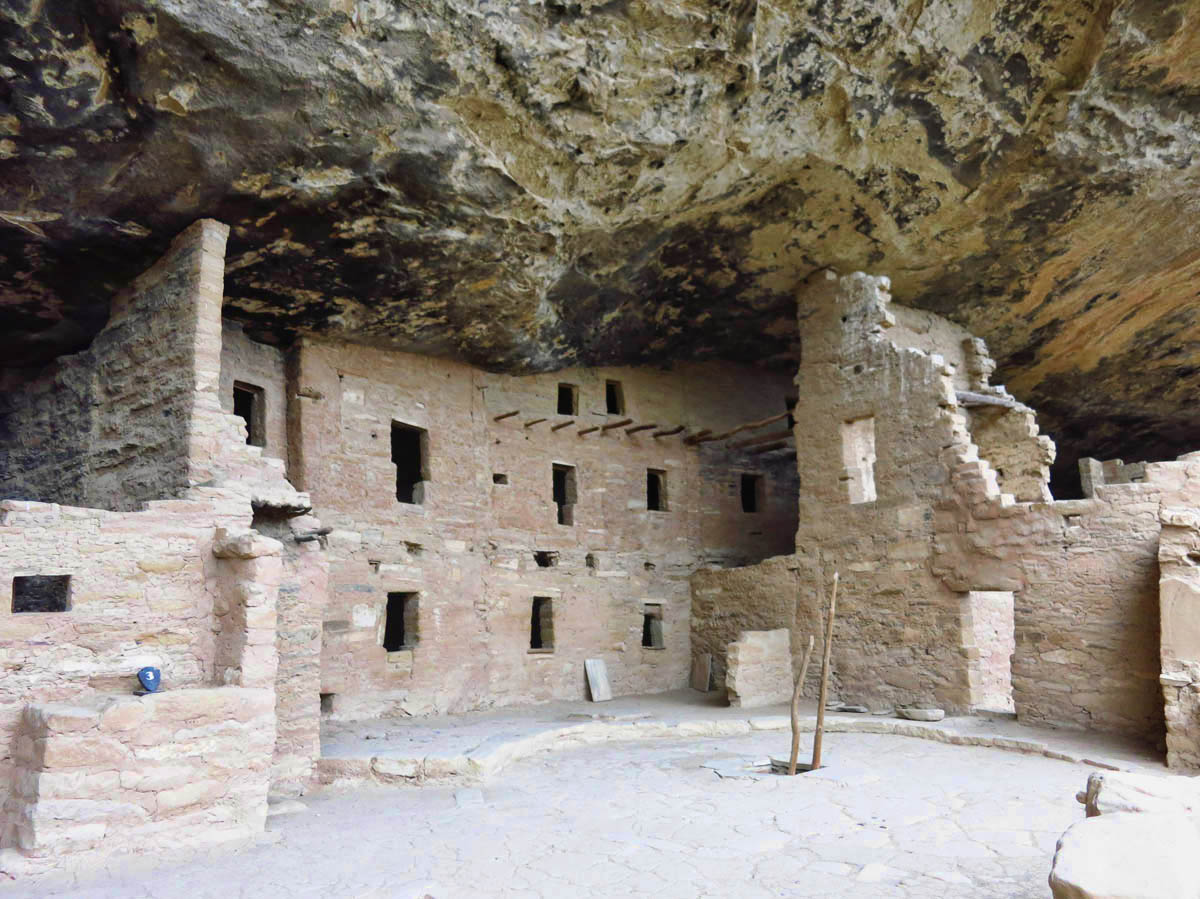 Spruce Tree House, a quarter mile down the path from the museum. 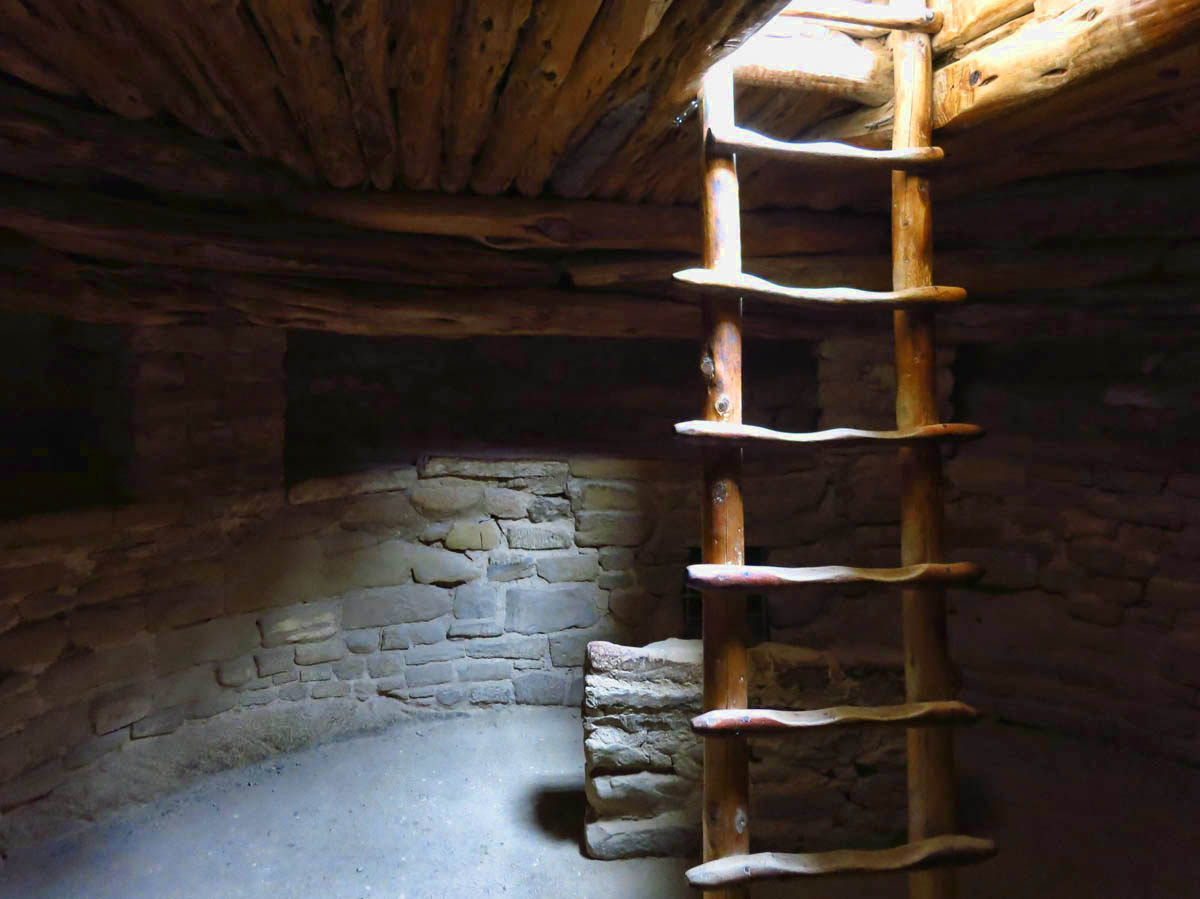 Inside a restored underground kiva. Roofs were made from logs.

The third dwelling open to visitors on Chapin Mesa, The Spruce Tree House, is also the third largest of the cliff dwellings.  It’s accessible via self-guided tour, just a quarter mile down the trail from the museum.  It is considered to be the best preserved of all the dwellings due to the larger overhang of the alcove, which helped protect it from weather.  There is no fee to access this site, since it is a self-guided tour. 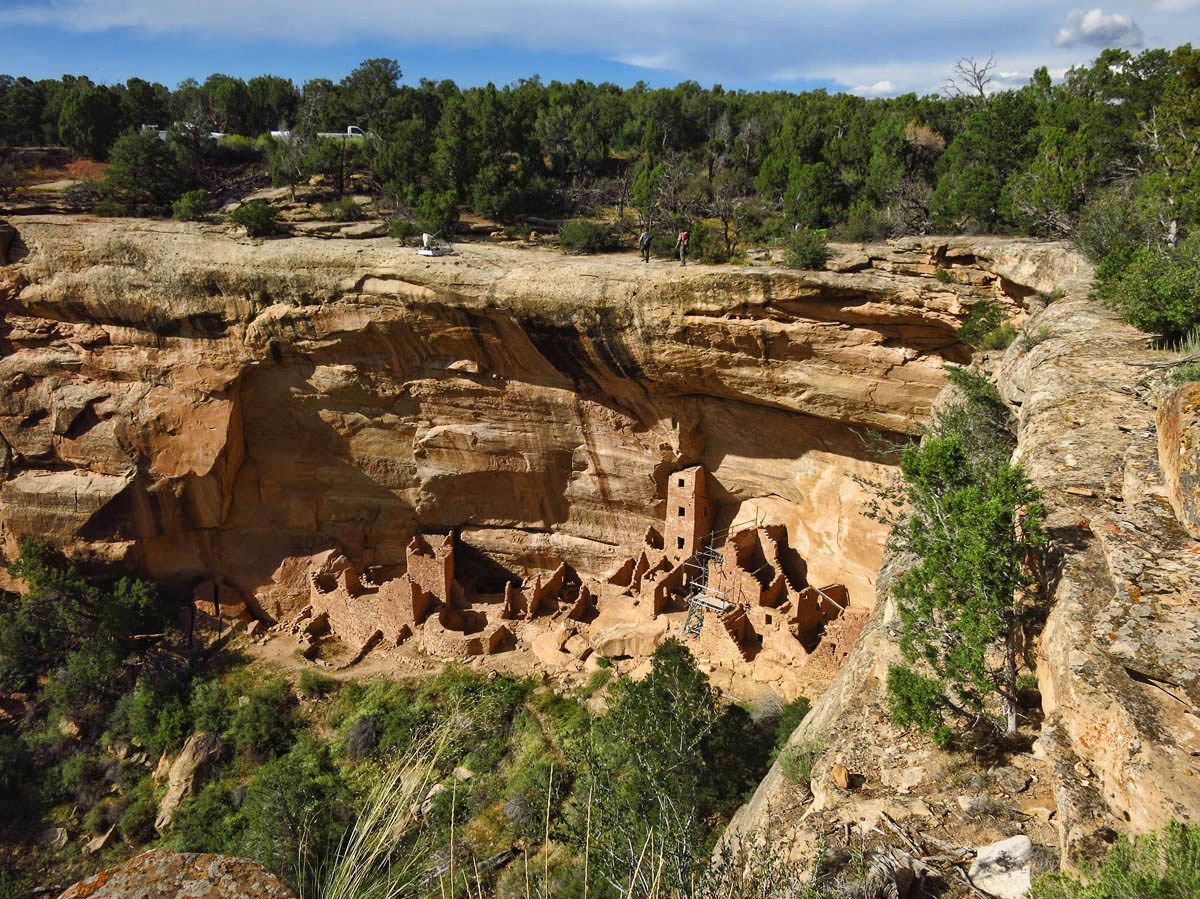 Square Tower House, with 60 rooms and 8 kivas. Under current preservation efforts, but 90% is original. 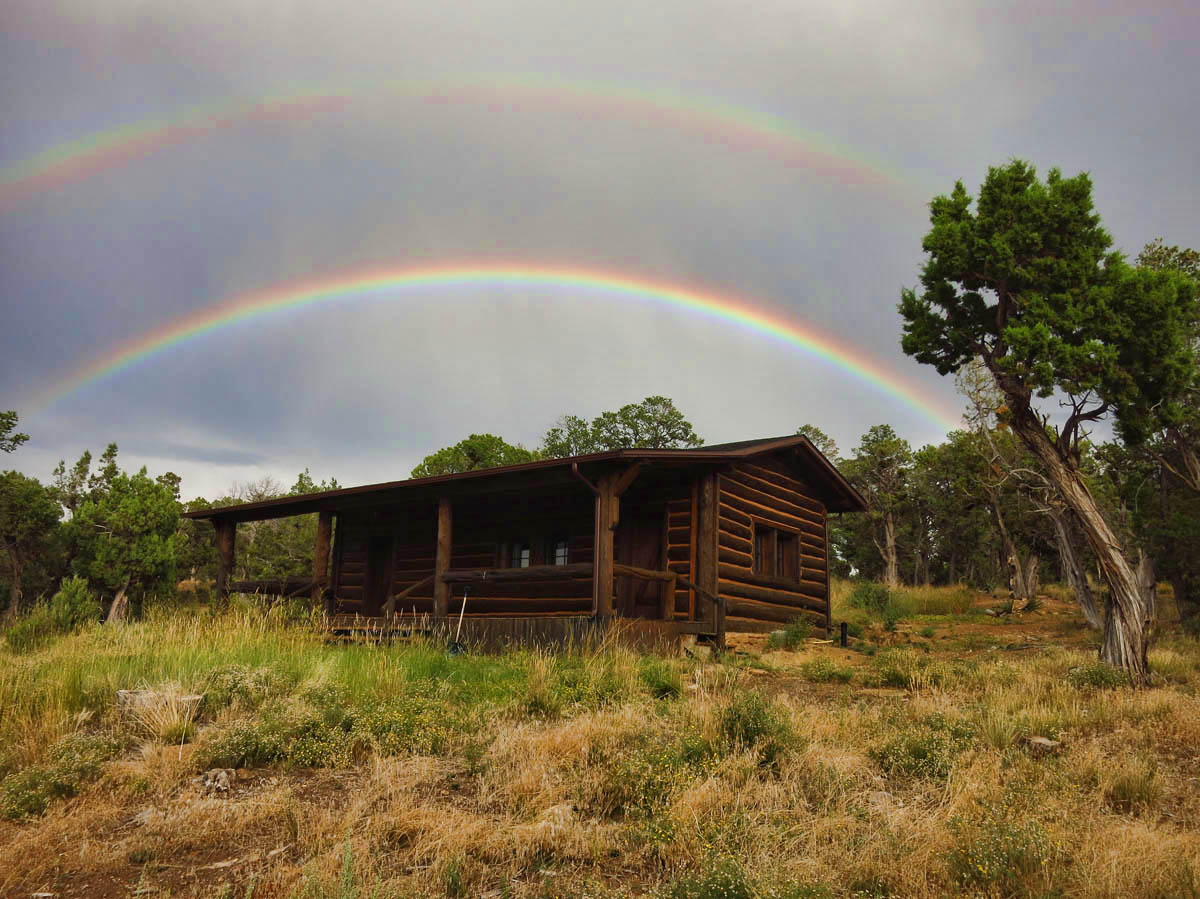 Next up….I explore the “quieter side of Mesa Verde.”

22 thoughts on “Mesa Verde: Legacy of Stone and Spirit”