Crested Butte has been on my radar for two reasons.  One being more reconnaissance in a “ski town.”  Like Telluride, it was a destination discussed often, but two traits of my former husband that factored equally; being cheap and being repetitious.  So we never broke out of the Ski the Summit/Utah mode.

But the main reason I have been eager to get to Crested Butte is because I want to do reconnaissance in another ski town…Aspen!  That’s right, explore Aspen from Crested Butte.  I have read there is a trail where you can hike “village to village” in eleven miles.  This just sounds so cool to me, especially when what can be done on foot in 11 miles takes over 100 miles to do by car!

I love talking to Mark and Bobbie and hearing about the crazy adventures they’ve had living in Colorado.  Whenever I ask, “Have you guys done that?” the answer always comes back in the form of a great tale of adventure or exploration.  So when I read that it was possible to do this hike leaving Crested Butte on foot and arriving in Aspen later that afternoon, I once again asked “Have you guys done that?”   Well, the record still holds, as Bobbie did it eight years ago with a group of “gal pals.”  After hearing her tell about it, I have to do this hike!

But my days in the dark clouds of Crested Butte have left me uncertain.  I sure don’t want to hike this in the cold.  And Mark says it can even snow up here at this time of year!   And I have been having trouble breathing, just from the extra 1,000 ft in elevation increase to 9,600 ft.   So I am apprehensive…

Bobbie has agreed to join me, and since Mark is still gearing back up after surgery, we will instead have our own personal Sherpa.  😉   This is great news, because now I don’t have to saw the end of my toothbrush handle off to save a few ounces of weight in my overnight pack.   I can do my usual over-packing job, and it will be there in my hotel in Aspen waiting for me.  Now, if I can only complete the eleven miles over Maroon Pass to get there!

Mark and Bobbie are coming from Gunnison, and I am 7 miles north on Washington Gulch Rd, so we agree to meet at the Visitor’s Center parking lot at 6:30am.  This means a 5:15am wake up call for me, which is not my finest hour.  There is a lot of pressure to be on time.  If I am late, Mark will write an entire sonnet about my tardiness.   The indoor/outdoor thermometer on my wall reads 37 degrees outside, 43 degrees inside.  It’s a good thing they  are already on their way, otherwise I would be tempted to stay in bed until it warms up, which at the rate we are going, might be next July! 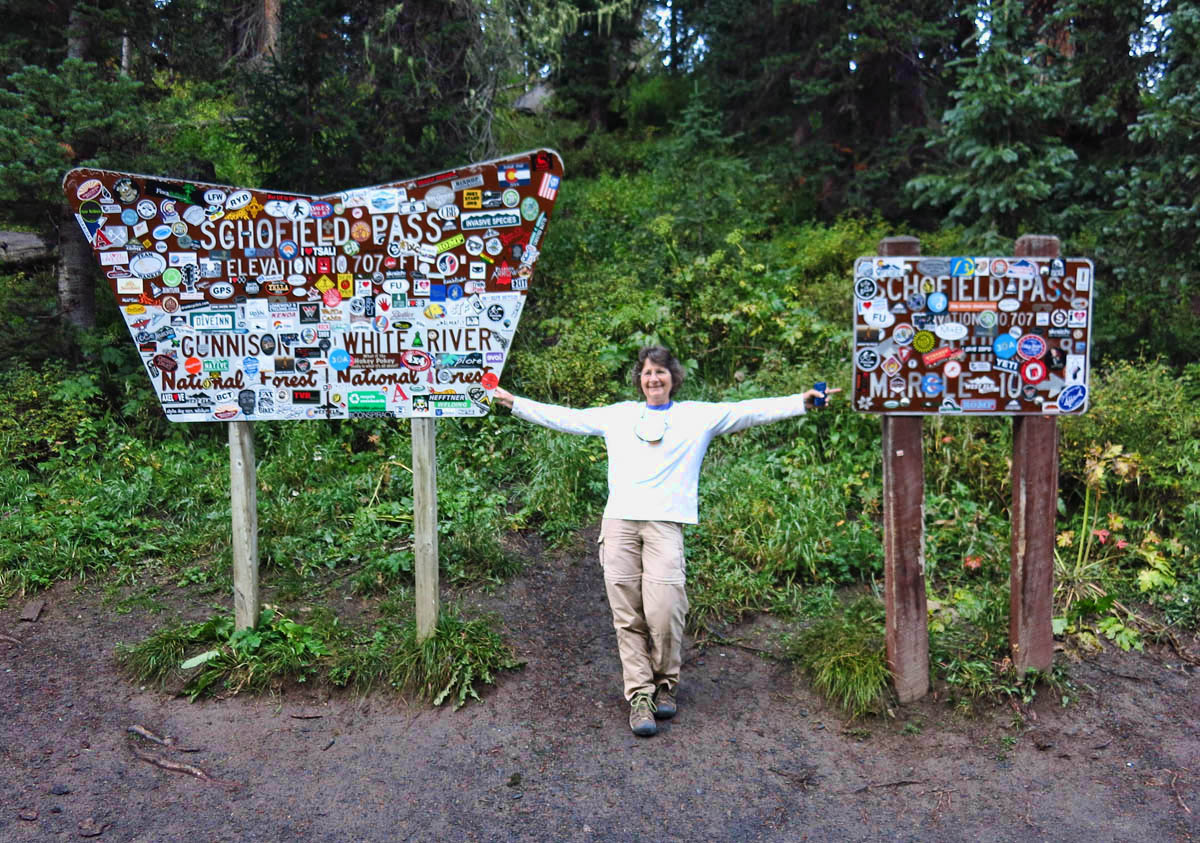 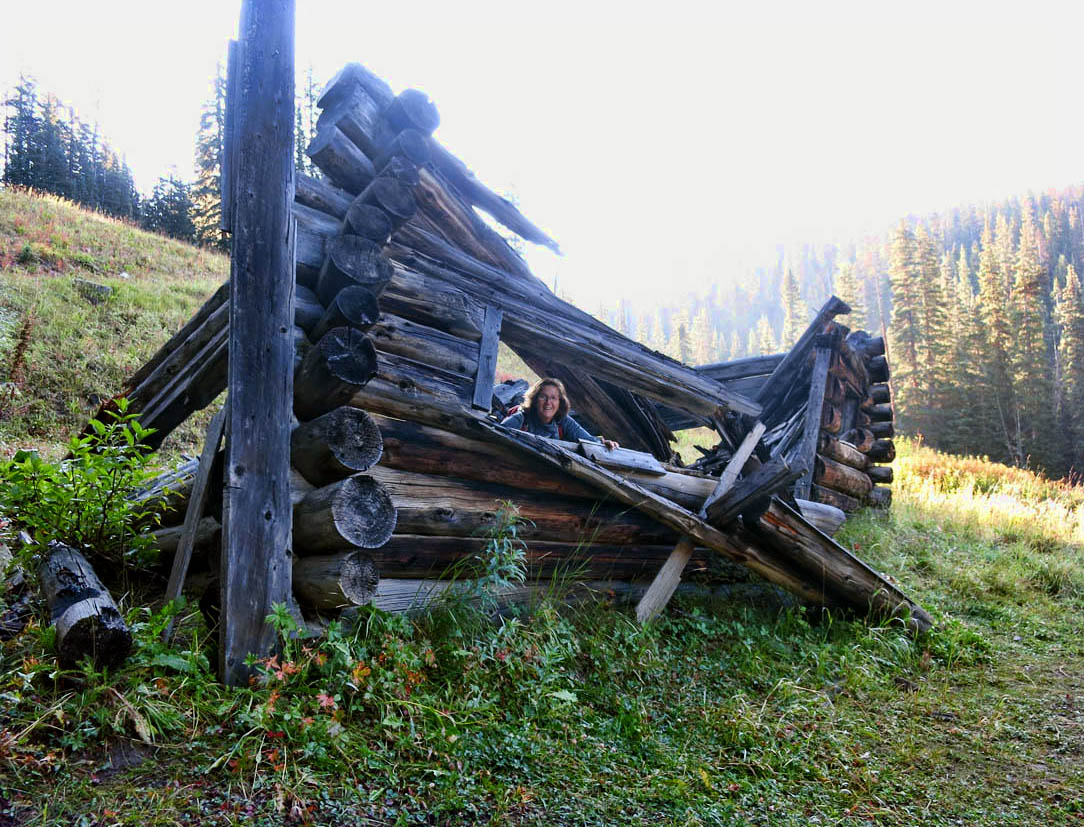 A rest stop disguised as a photo op. 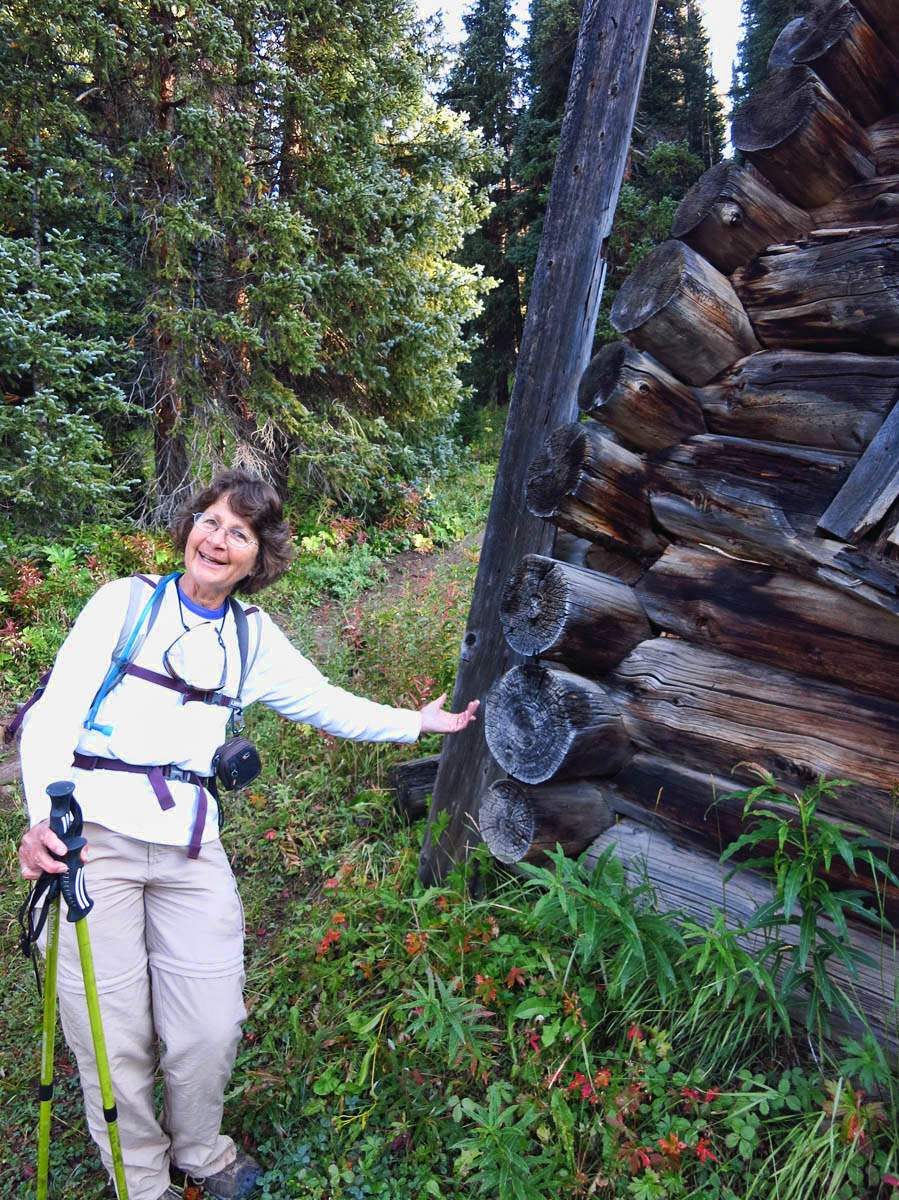 It’s way too early in the morning for that, Vanna!

It’s a rough ride up the 14 mile road to the trail head, just beyond Schoefield Pass.  I have quizzed the woman at the Visitor’s center earlier in the week to see if she thinks the Tracker would make it.  She tells me, “Under normal circumstances, yes.  But all this rain is not normal circumstances.  It’s a muddy mess up there.  Parts of it are narrow, one lane, with rock on one side and sheer drops down into the canyon on the other.  Even the shuttle guys, who are experienced four wheelers are sliding all over that road.”      I secretly hope Mark is willing to drive us to the trailhead, and I cook up an excuse that if we decide to drive back instead of hike, my Tracker will be in a more convenient location for him.   But he has a counter-excuse prepared.  Something about a column deadline, and speeds off out of the parking lot headed for the bakery named “Three Chix.” 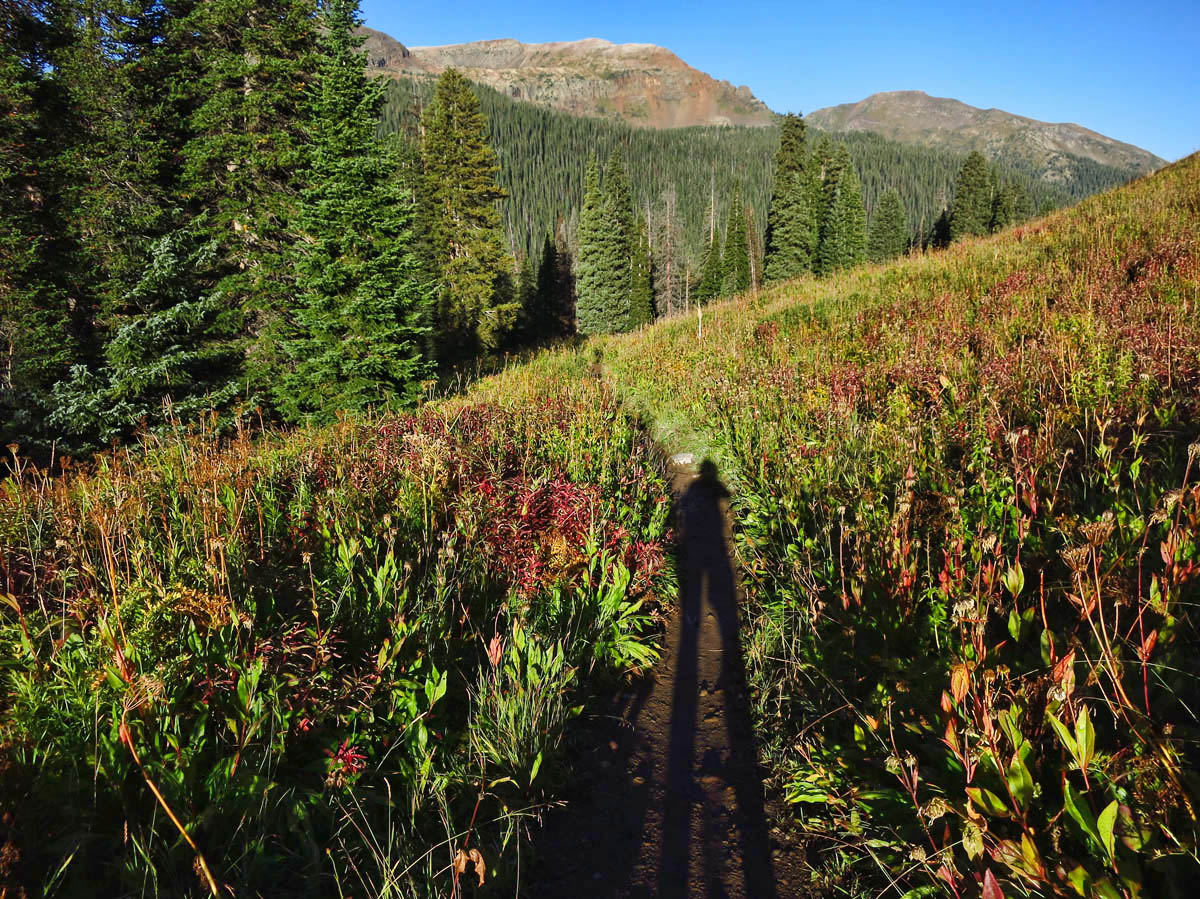 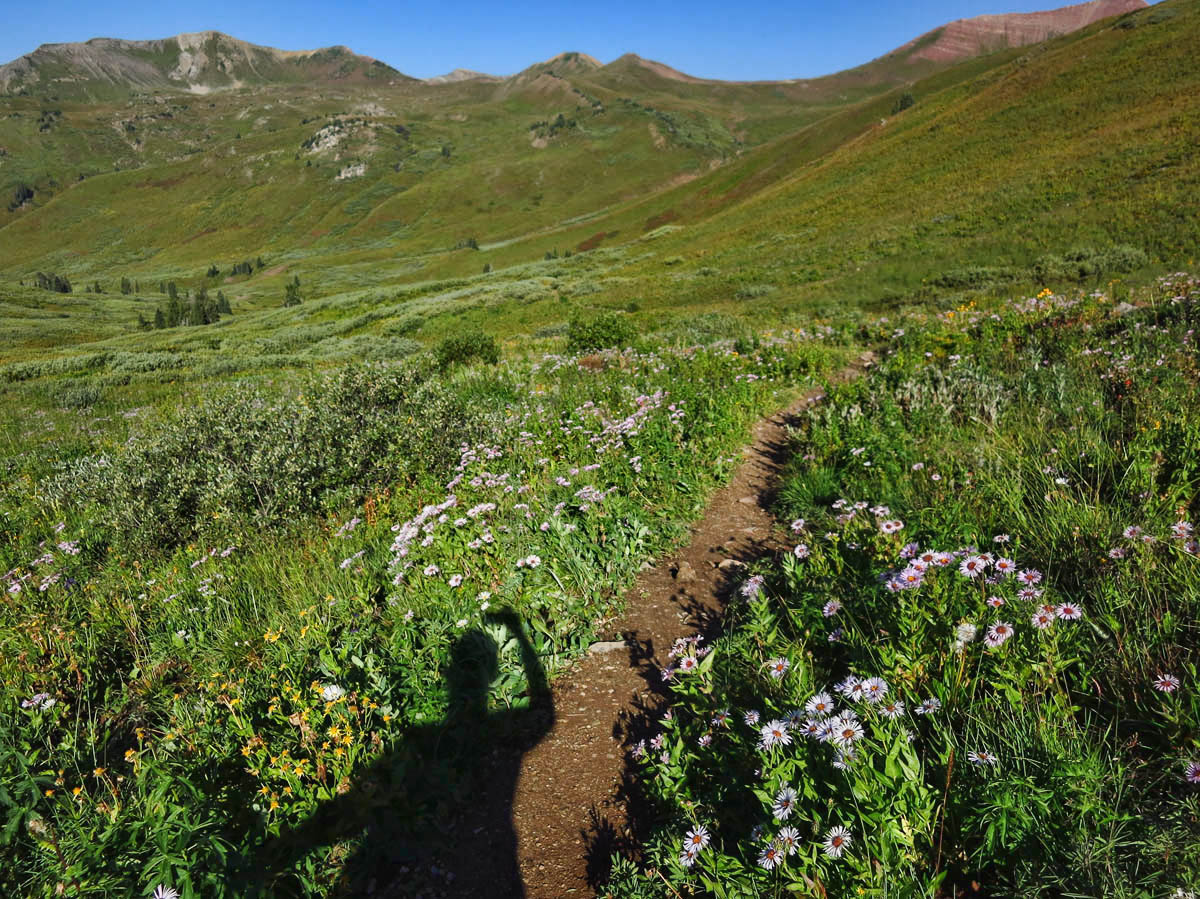 There are a few more wildflowers remaining at elevation than I expected.

It’s a long, cold, freakishly scary drive up Gothic Road to Schoefield Pass.  I ask Bobbie if she’s okay.  “Yeah, the drop-offs are all on your side!”  Thanks, Bobbie!   I feel such relief to see the signs indicating that we have reached the 10,705 ft pass, and the little Tracker has pulled through again! 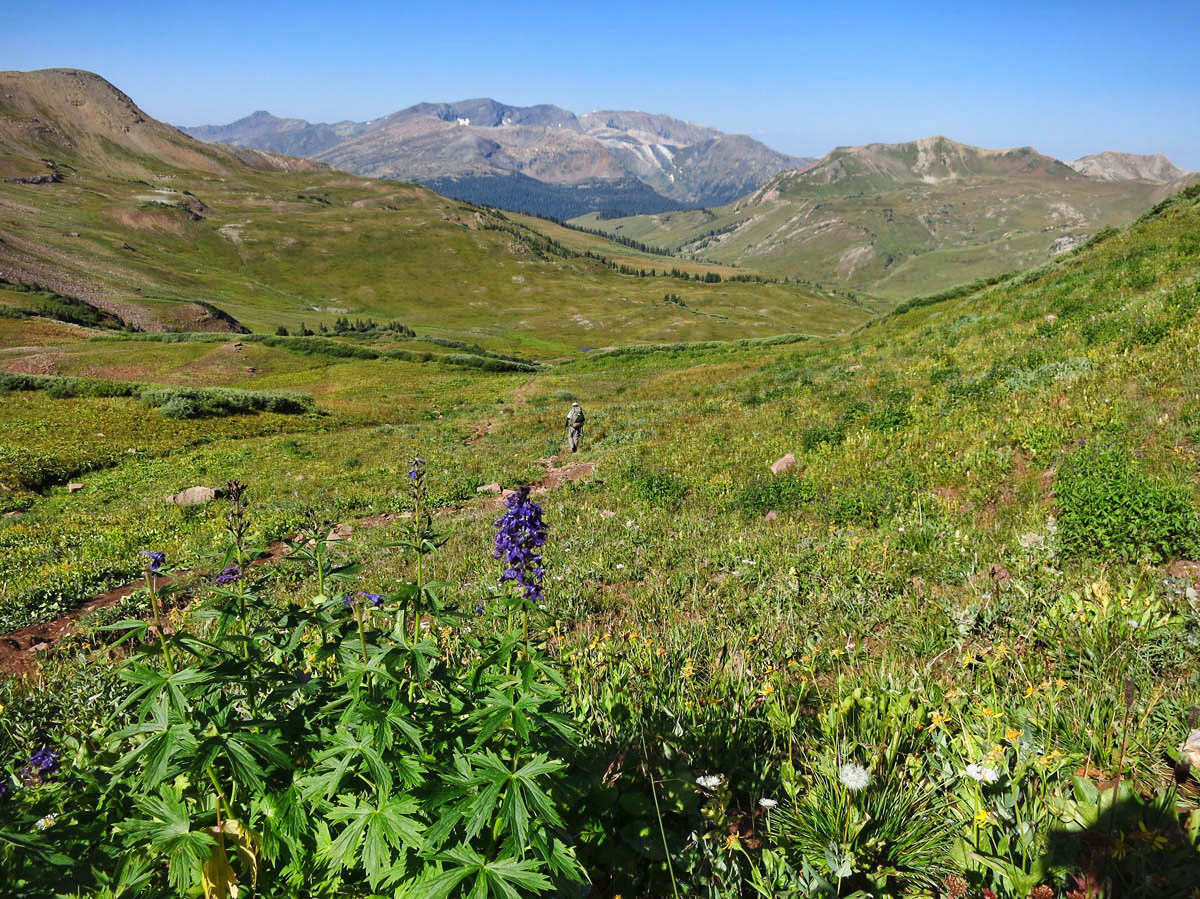 One of the many “Four Pass Loop” backpackers heads down the trail. 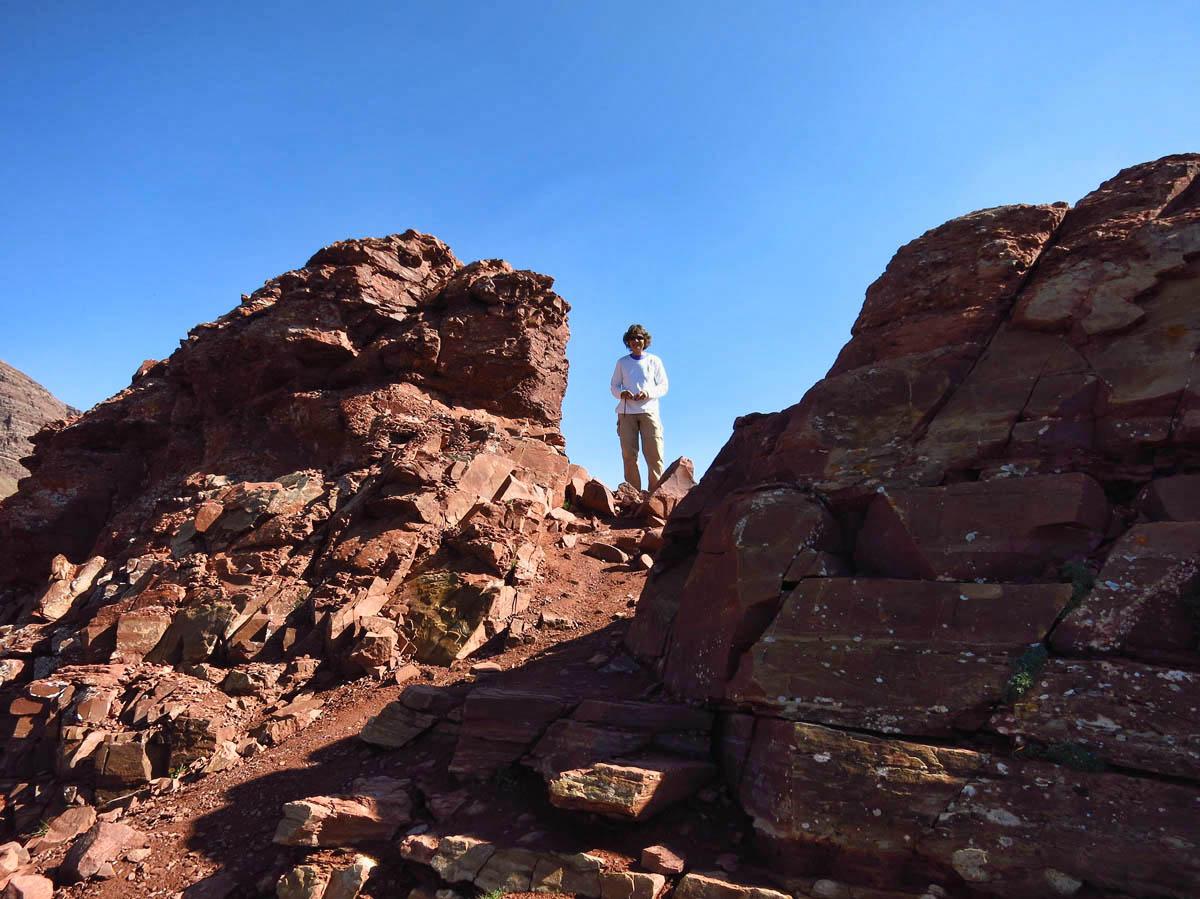 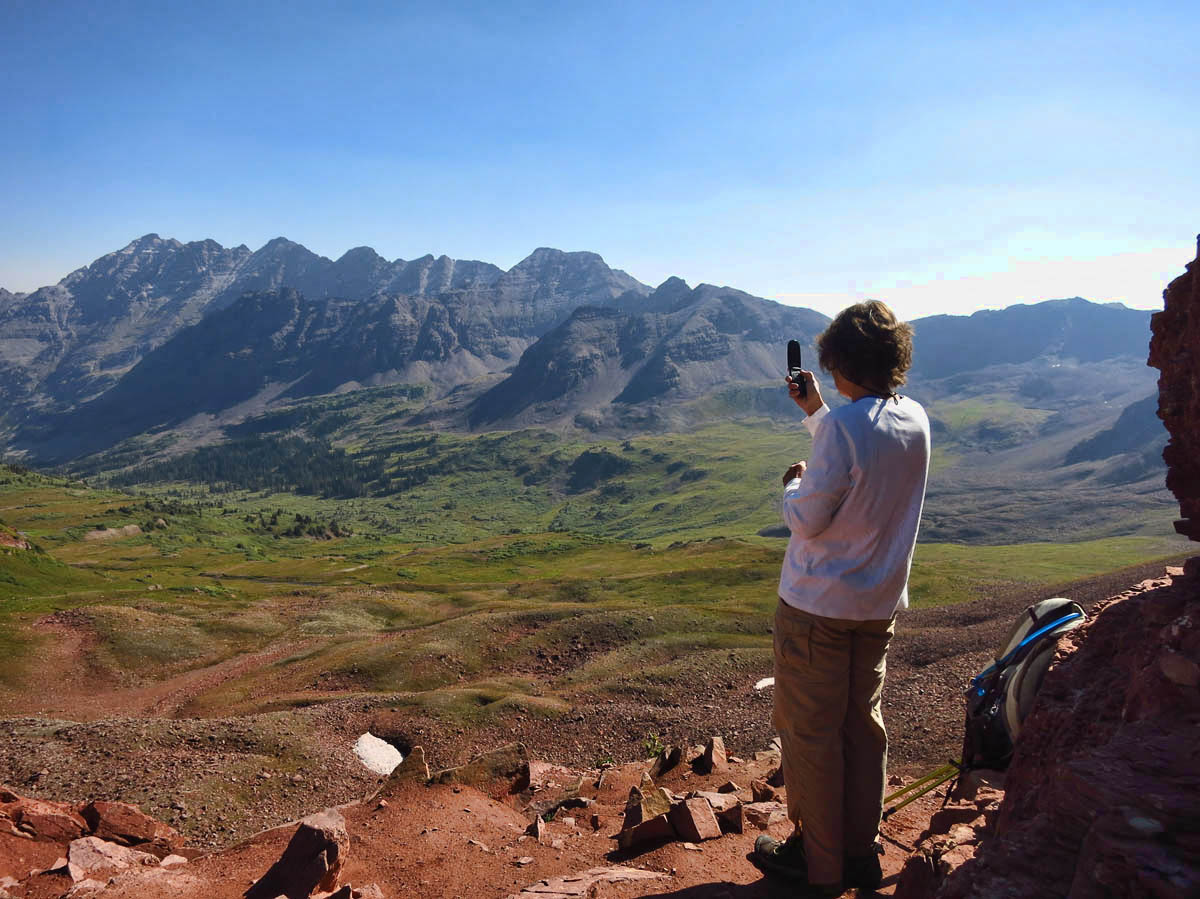 The question on every mountain climber’s mind, “Can I get a signal?”

It’s a brisk fall morning when we start off walking along a stream, and in the dark forest I can see my breath.  As we emerge into the basin, there are fields of “dead heads” as high as my armpits in the meadow, so I can only imagine what it must have looked like during wildflower season.  But if the flowers were in bloom, I suspect Bobbie and I wouldn’t have the trail all to ourselves. 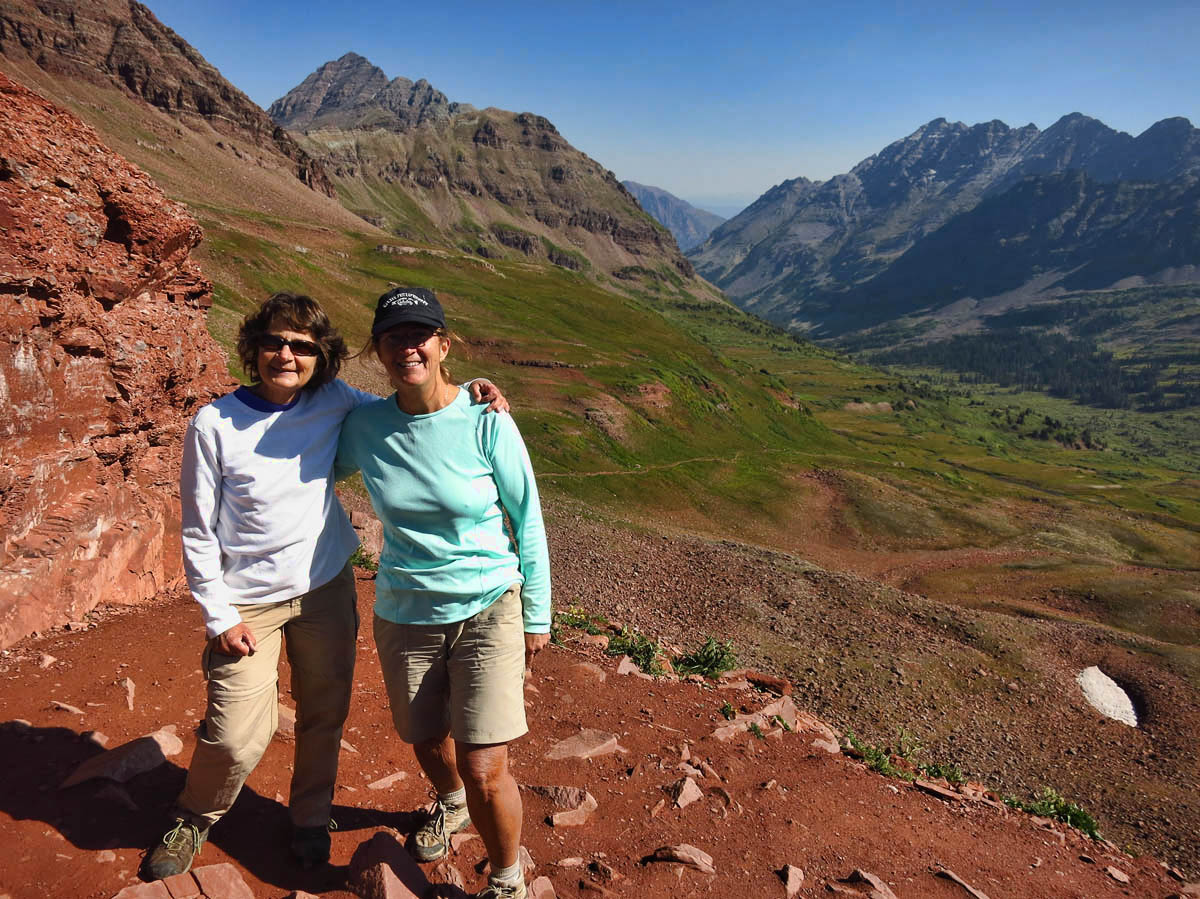 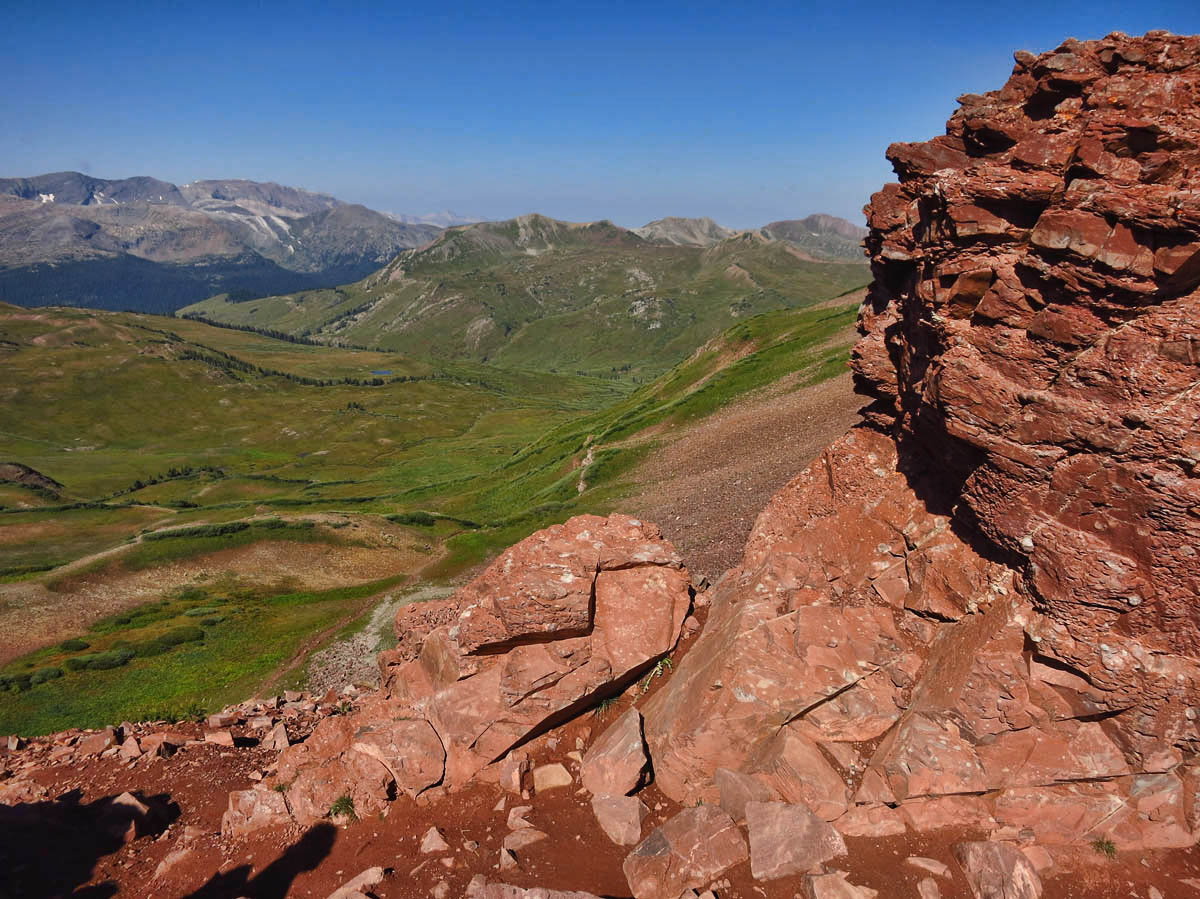 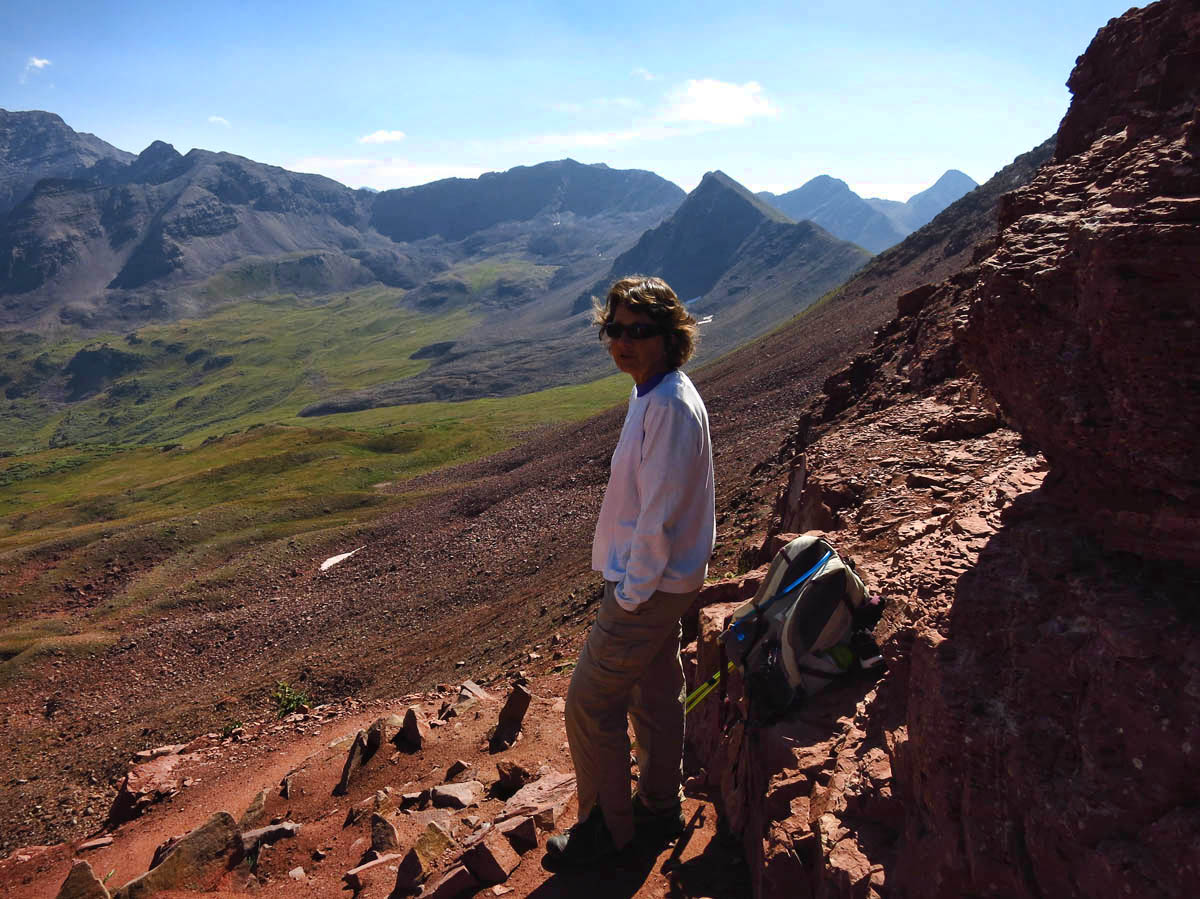 “It’s all downhill from here.”

The first three miles are relatively easy.  Just a pleasant, reflective walk as the sun starts to warm us.  But all too soon, the climbing begins.  The fourth mile is a series of steep switchbacks on the way up Maroon Pass.  I slow down considerably and lose sight of Bobbie altogether, but I hear her shout back, “Look!  There are people up on the pass”    “Oh, you mean those fly specks on the horizon?”    Bobbie beats me to the pass by 15 minutes, and waits patiently as I huff and puff up the last remaining stretch of scree.    I meet a few backpackers on their way down from the pass.   They are all hiking the 26-mile Four Pass Loop, a multi-day trip that climbs four 12,000 ft passes;  West Maroon at 12,500 ft, Frigid Air at 12,415 ft, Trail Rider at 12,420 ft, Buckskin at 12,500 ft.  I am just happy to have climbed one! 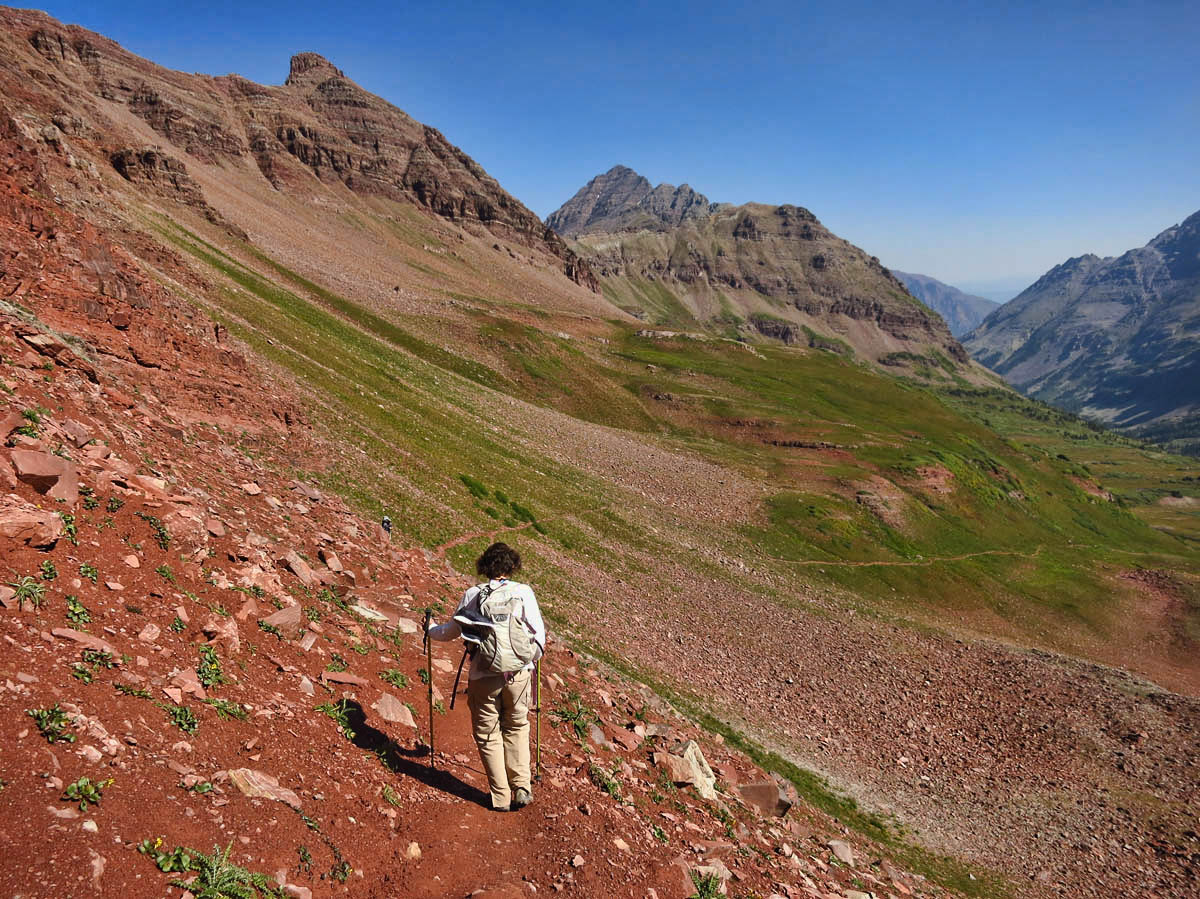 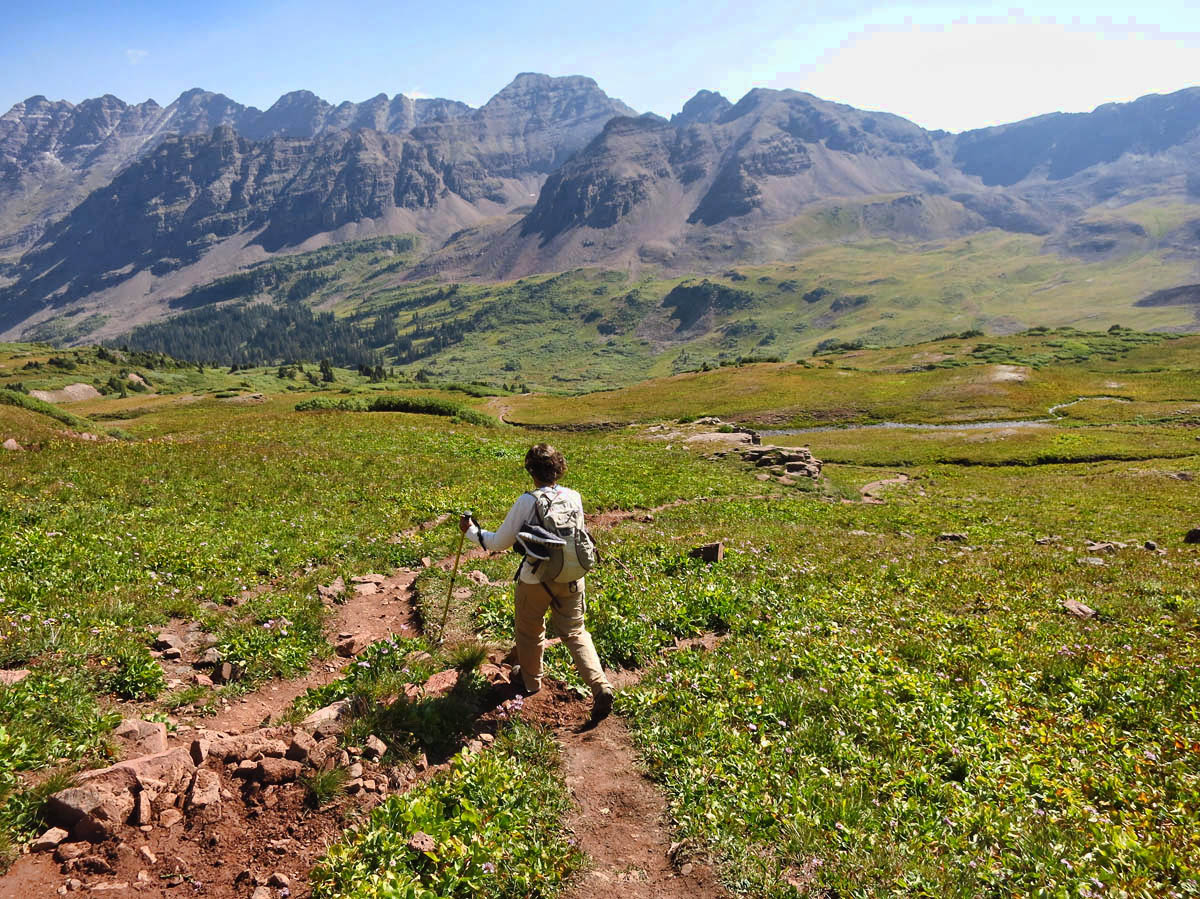 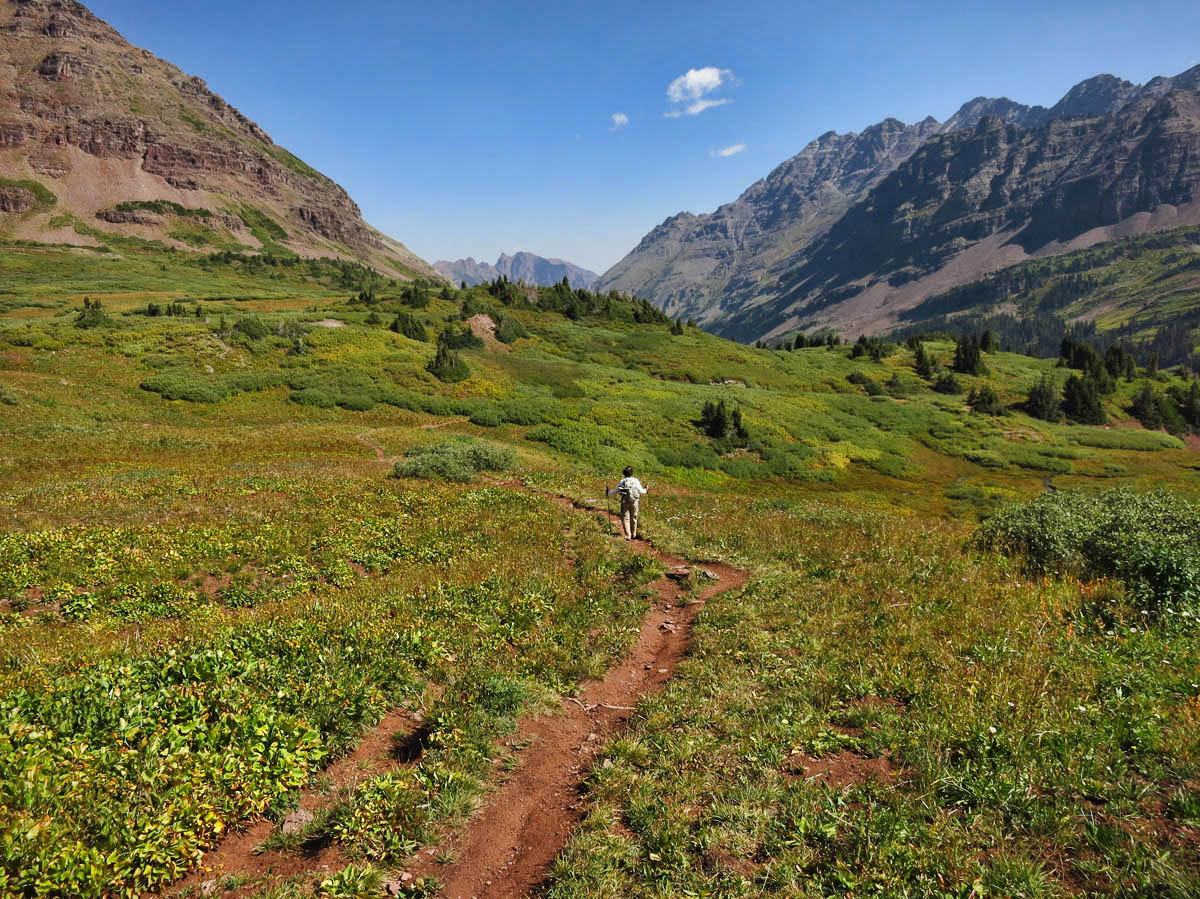 We stop at the top of Maroon Pass for a few photos and a quick bite to eat, and then it’s downhill all the way for the remaining seven miles.  Bobbie turns on the after-burners, and I do my best to keep up, but my camera slows me down, as I stop to snap one photo after another.   My only hope in catching up with her is that I know she will eventually have to pee.  She may be able to eat cheese and crackers, add and remove clothing layers, and shoot phenomenal photos on the run, but one thing I know, she at least has to stop to pee.  😉 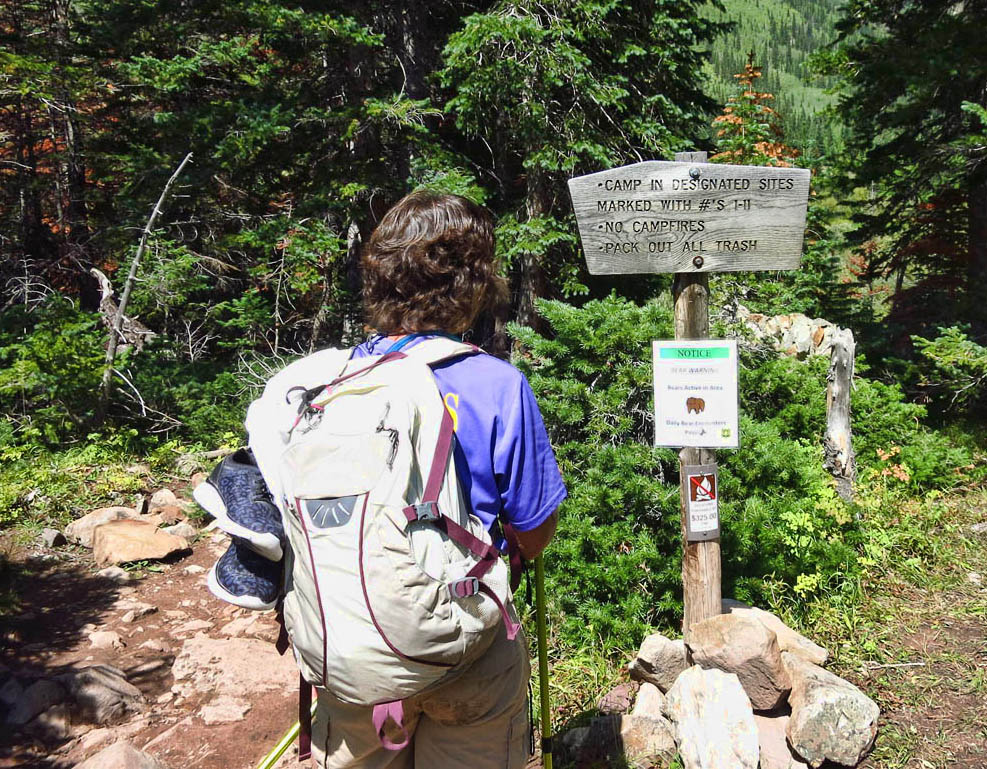 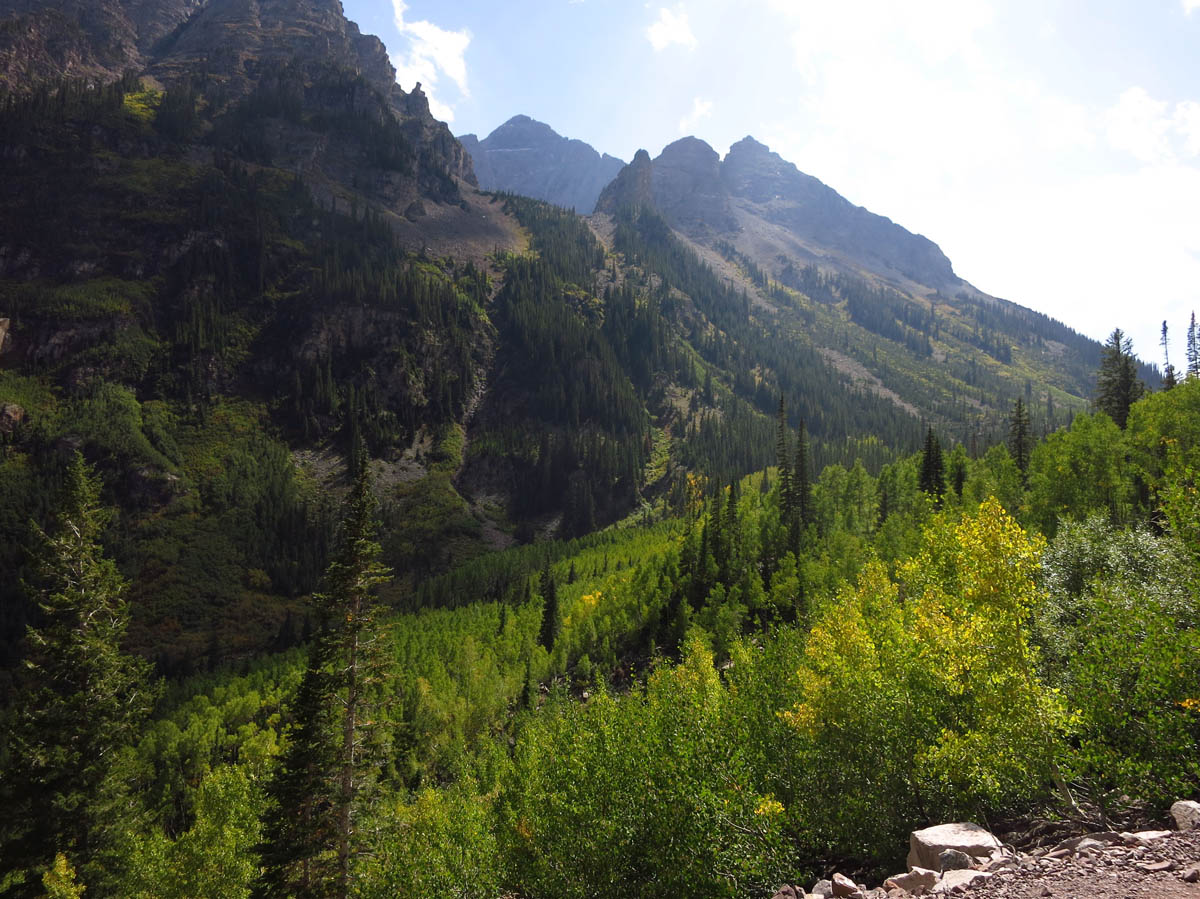 Very few signs yet of fall color, but it is starting… 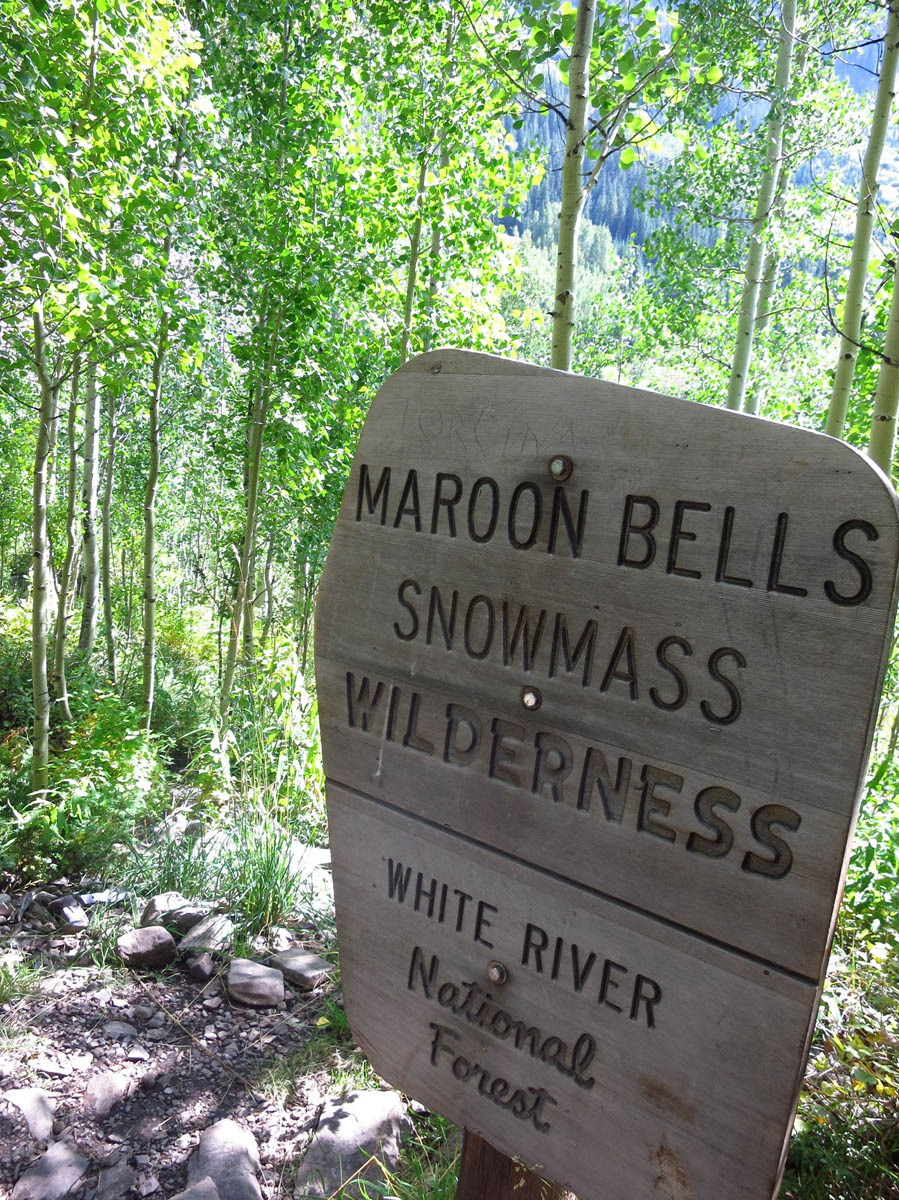 The views on the downside of the pass are just stunning.  And for the first couple of miles, the trail is quite pleasant.  But then, we start to see the effects of all the rain.  The trail becomes quite muddy, to the point that it feels like running an obstacle course to stay out of it.  Soon, the mud is the least of my worries, as we are traversing huge fields of car battery-sized rocks.    It’s a slow seven miles. 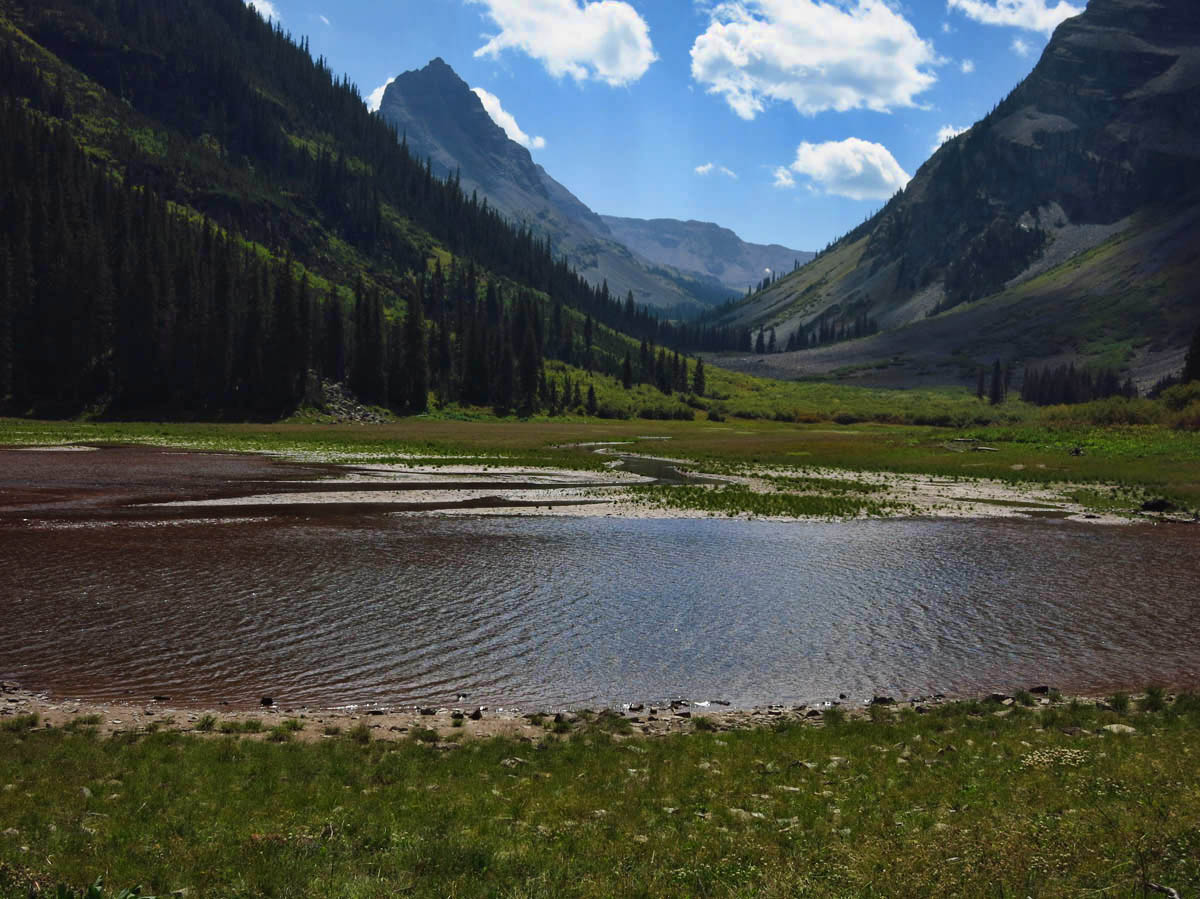 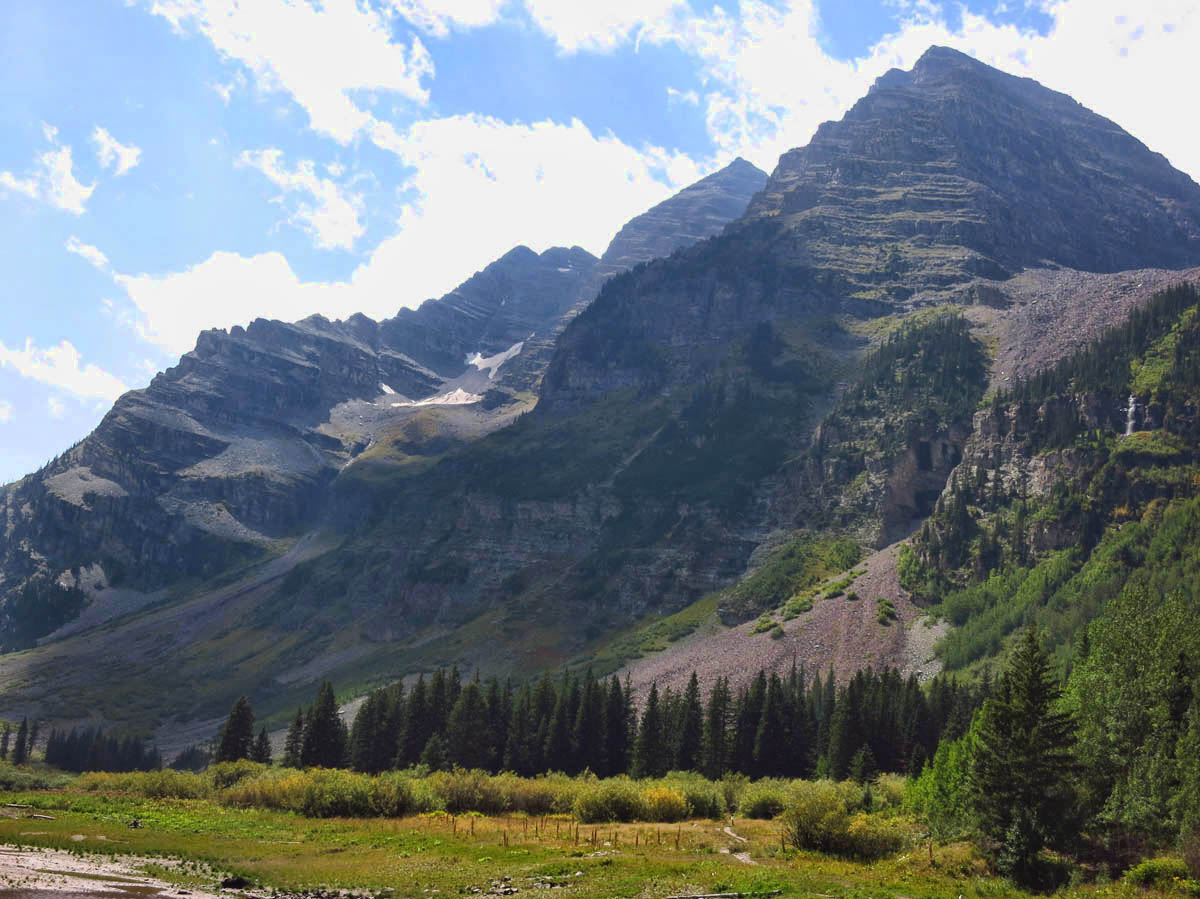 We get our first look at Maroon Bells, two twin 14ers. 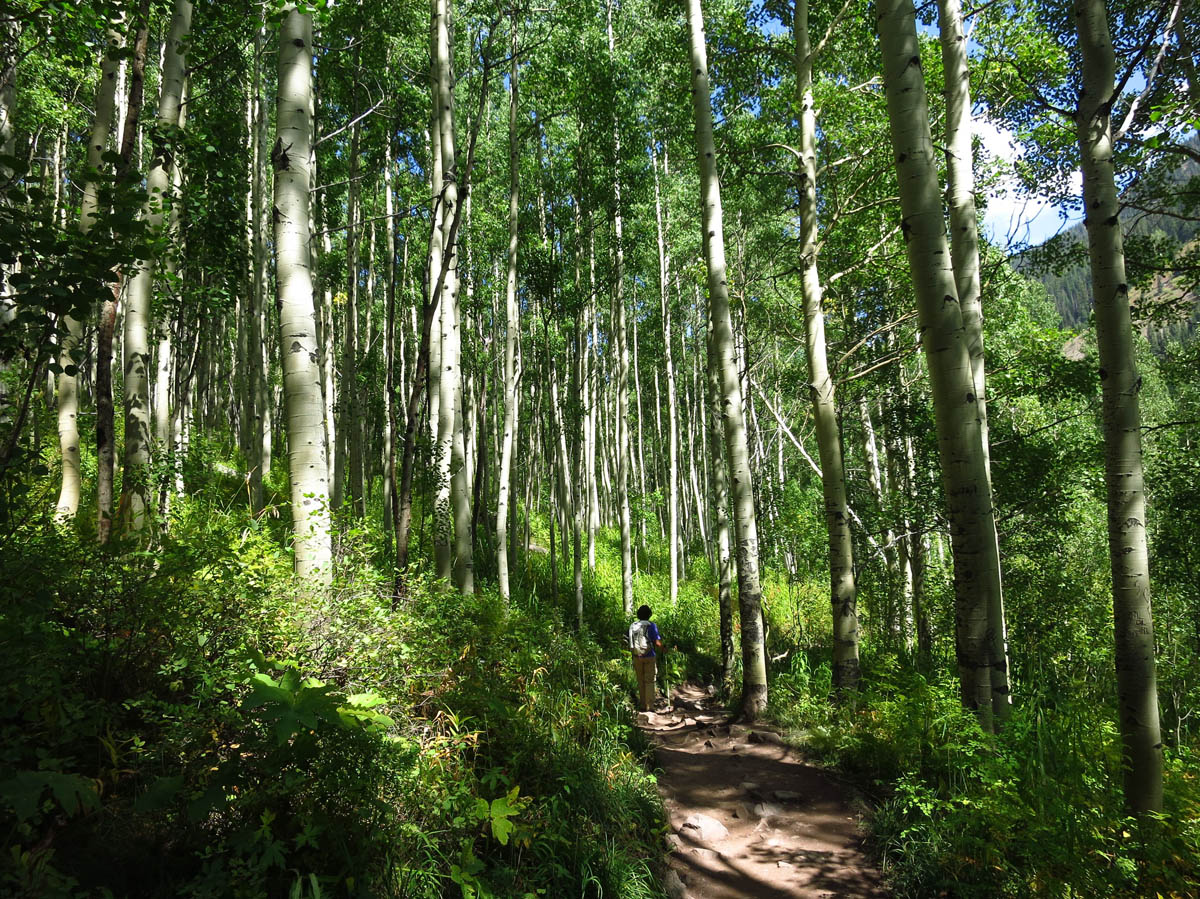 Bobbie heads through one of the many aspen groves

Bobbie tells me I will know when we are getting near, as the trail will become quite crowded, and we will start to see people hiking that don’t look like hikers.    Soon, backpacks have been replaced by baby carriers, and we begin to run into the groups of ethic sightseers as we approach Crater Lake.    Many people hike the 2 mile trail between Crater Lake and Maroon Lake. 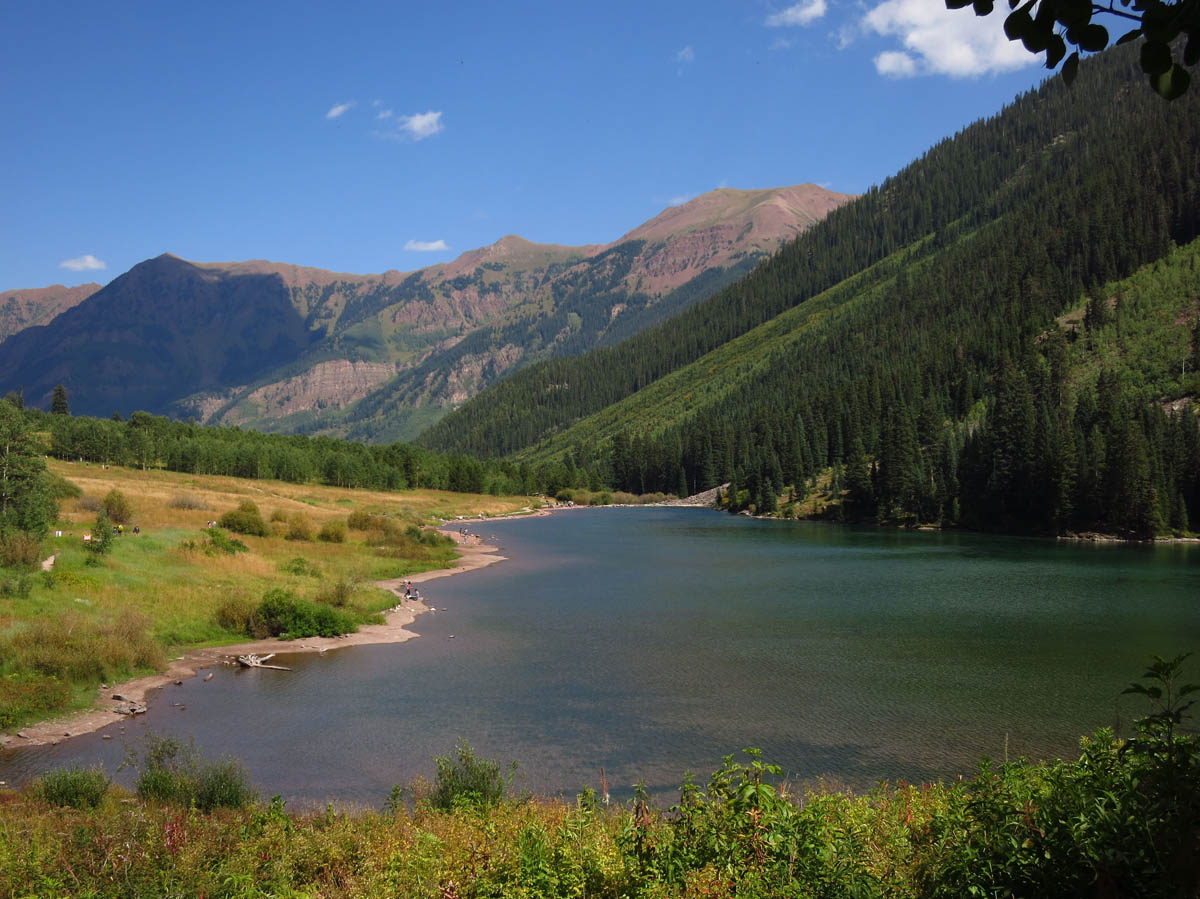 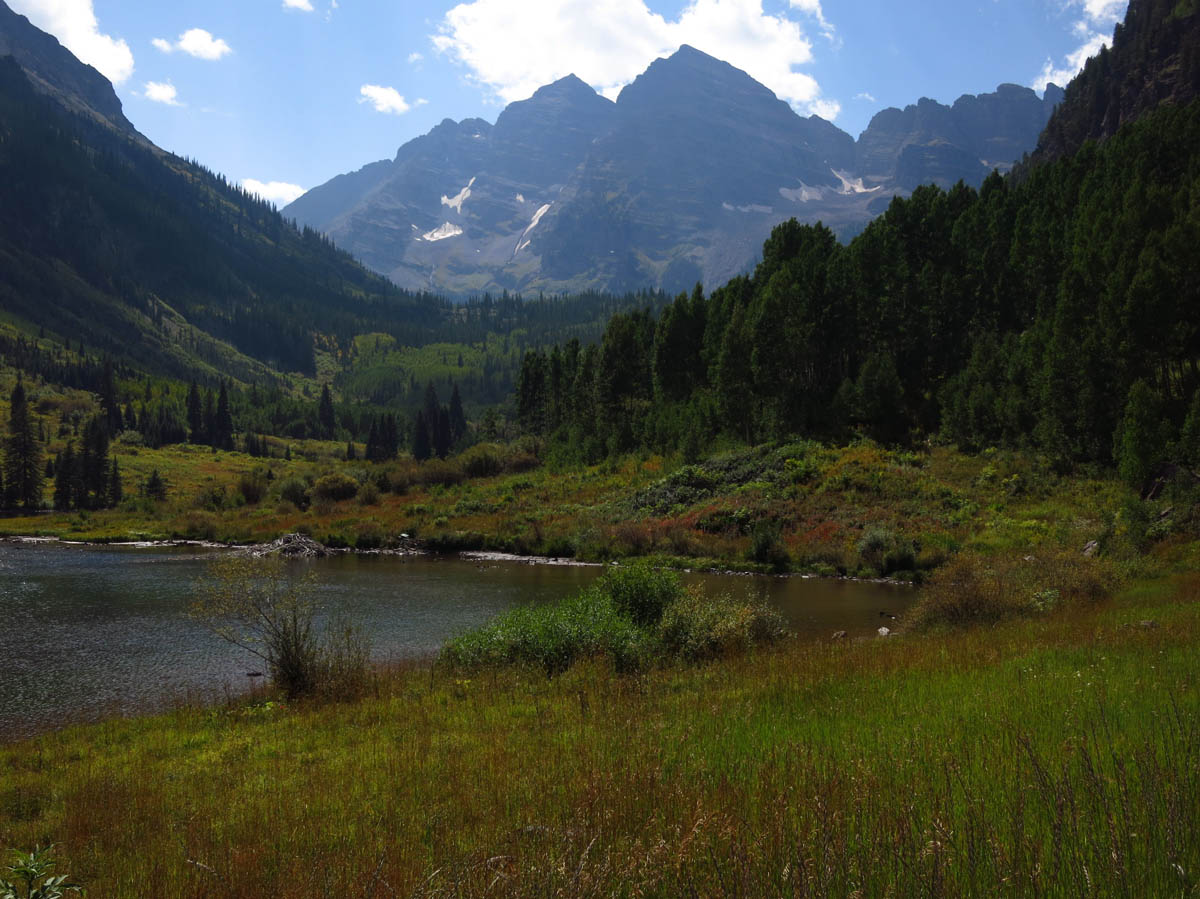 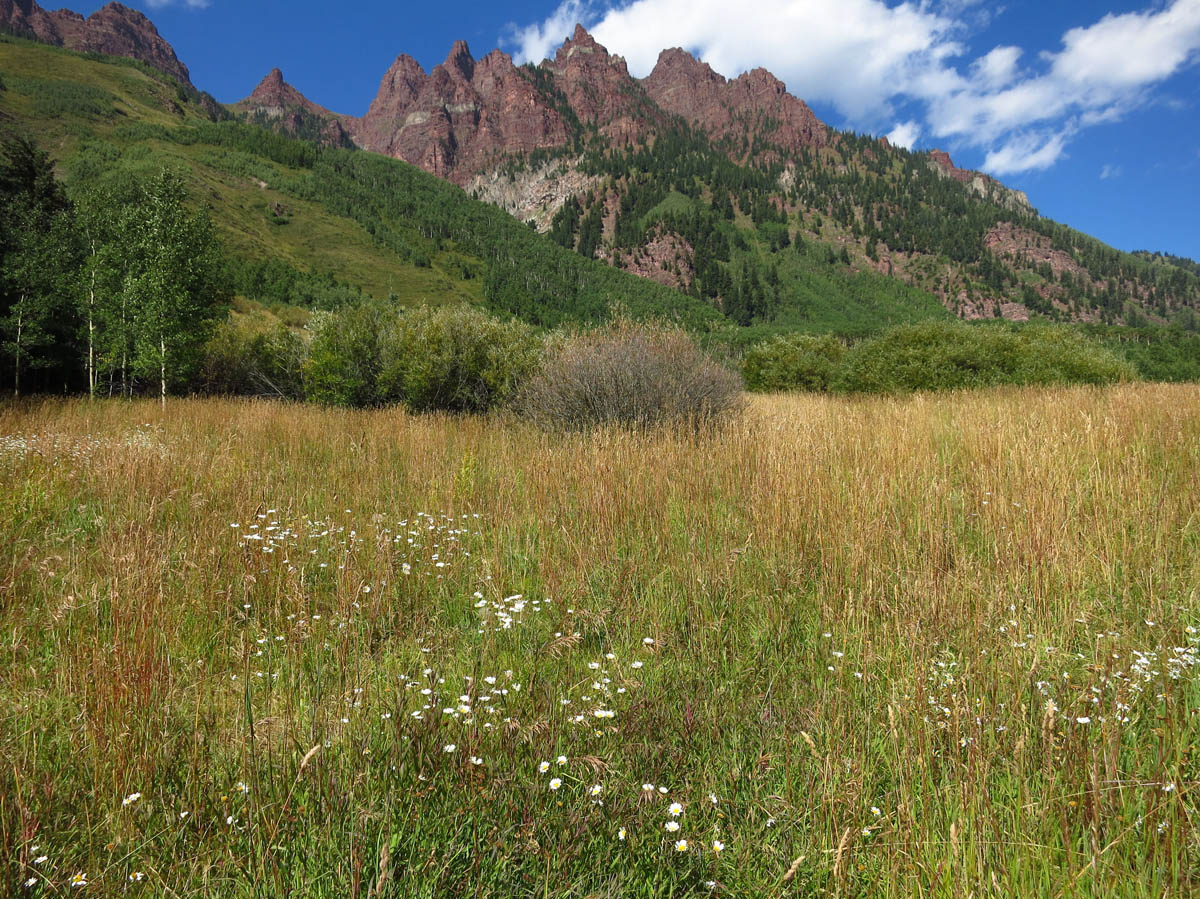 Soon, we are in sight of the famous “Maroon Bells,” reported to be “the most photographed mountains in North America,” and the number one tourist attraction in Aspen outside of skiing.  Unfortunately, it is a bit hazy, and the afternoon sun is now lighting up my camera lens, but to see these two twin majestic peaks is just breathtaking.    These are two of Colorado’s “14ers,” Maroon Peak at 14,156 feet and North Maroon Peak at 14,014 feet.     A plaque at the edge of the lake installed by the US Forest Service warns  of “The Deadly Bells.”  The sign cautions would-be climbers of “downsloping, loose, rotten and unstable rock that kills without warning.”   Colorado has 54 “fourteeners,” of which Mark and Bobbie have climbed fifty.   The “Deadly Bells” are two of the four peaks that remained when they finally came to their senses.  😉 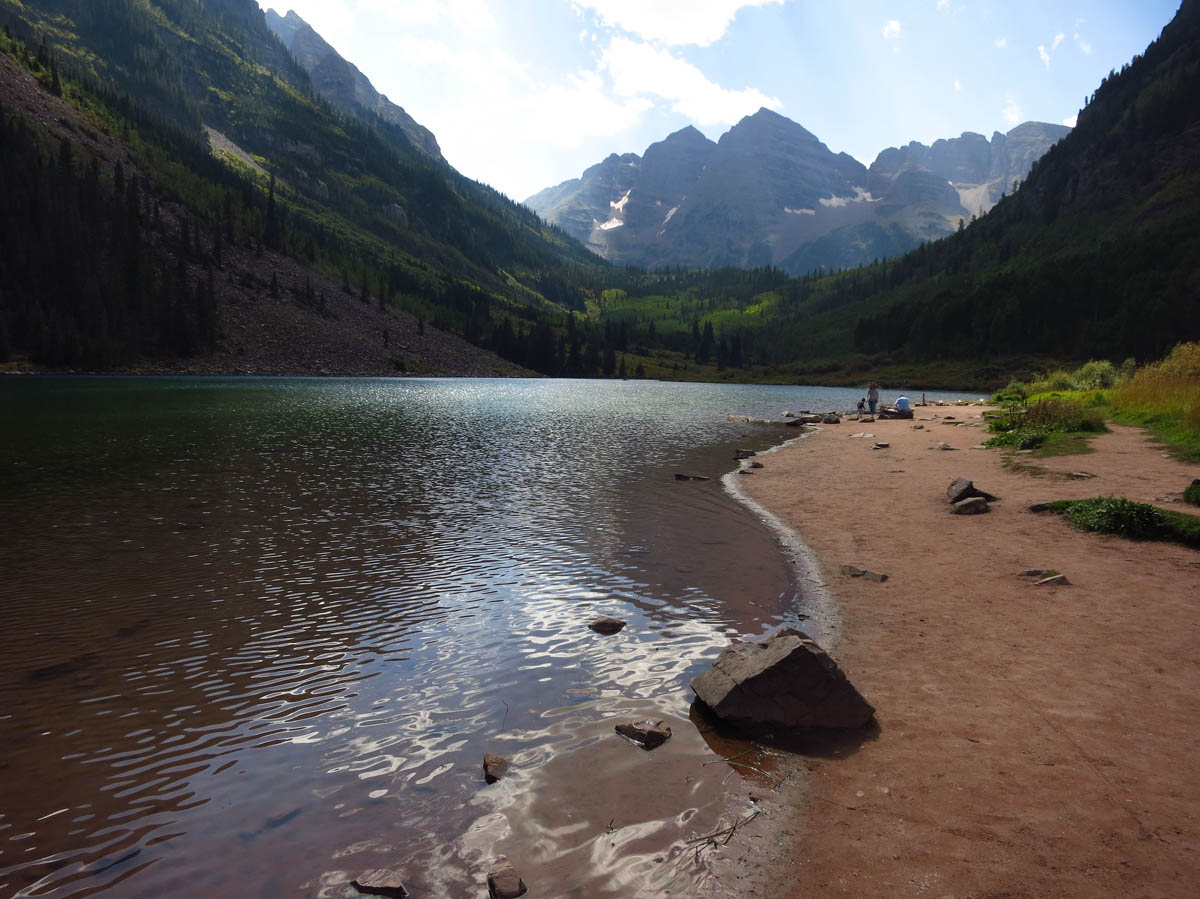 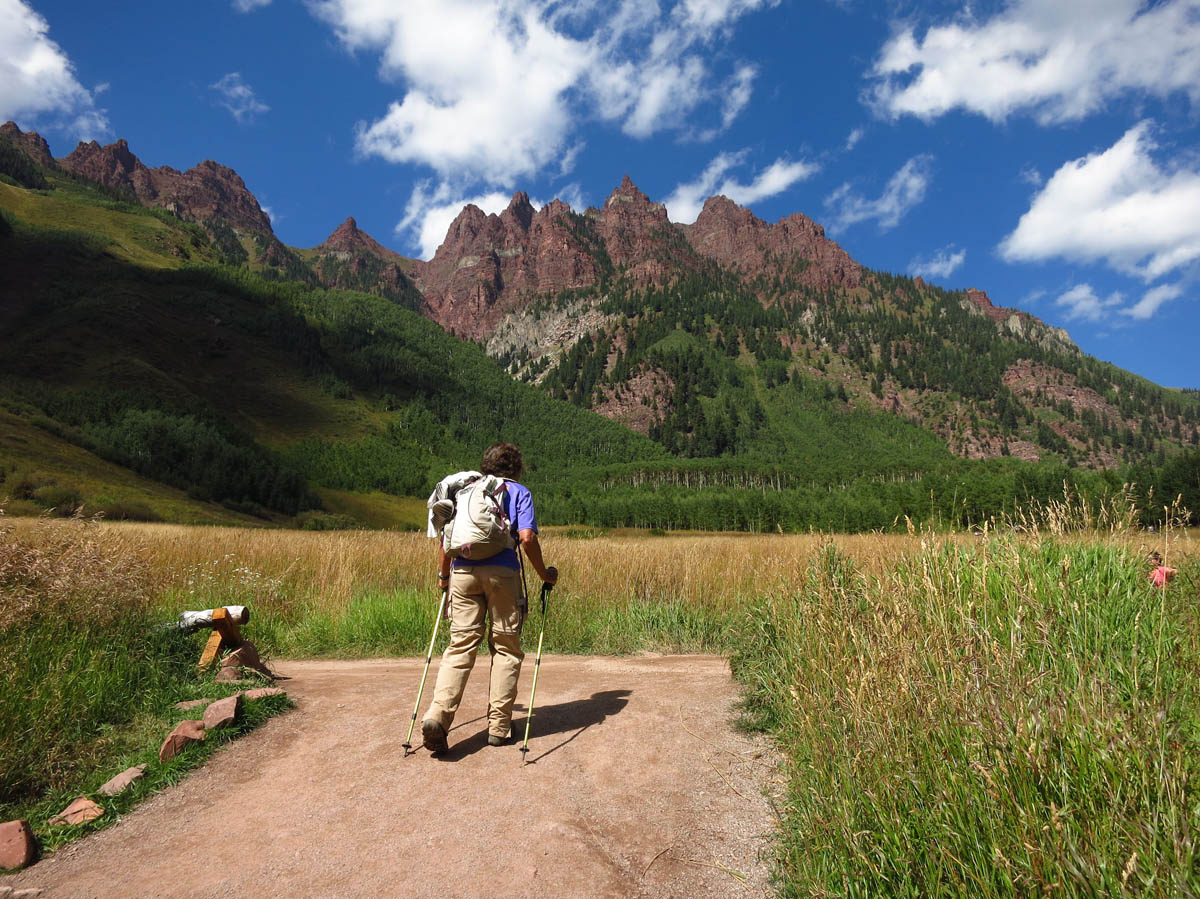 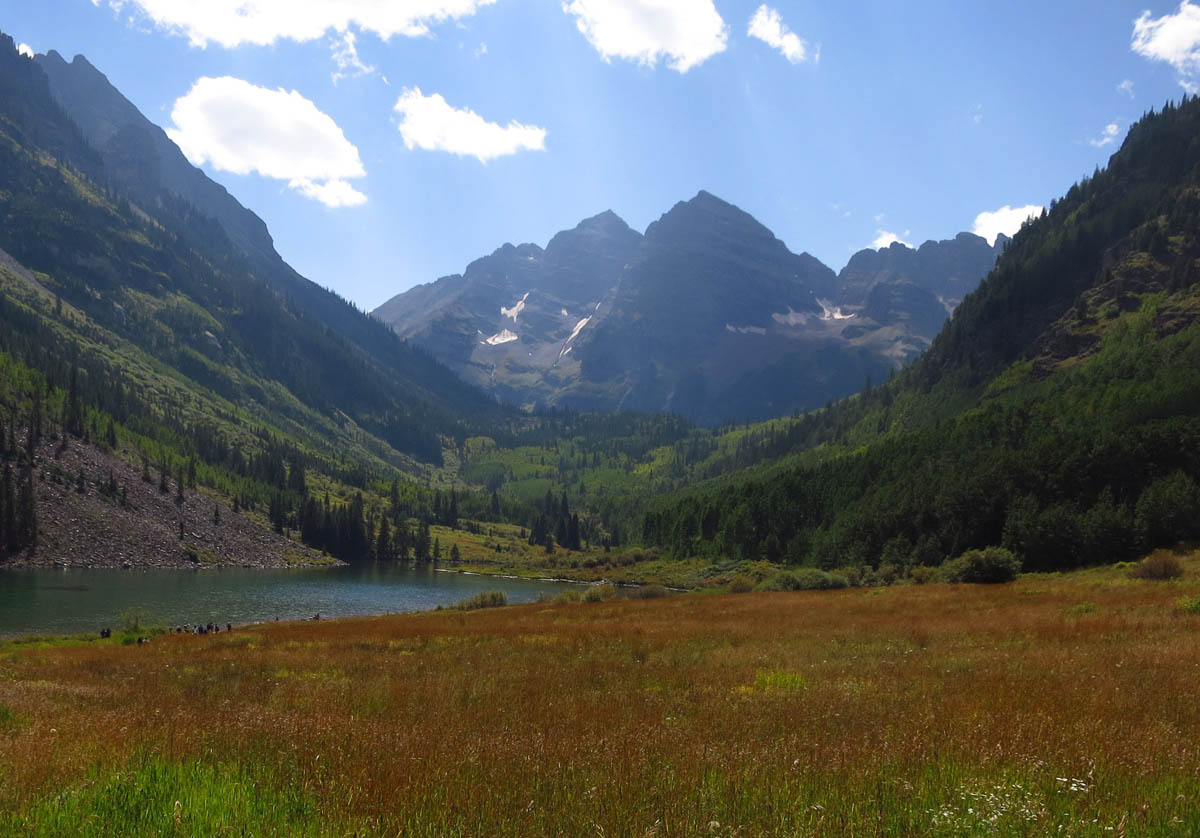 The trail ends at Maroon Lake, but no vehicles are allowed inside the recreation area between the hours of 9:00am to 5:00pm.  So we will need to take a shuttle into town, where Mark is waiting patiently while consuming all the complimentary cookies in our hotel lobby.  We arrive at the bus stop at 2:30pm.   I am feeling good, not tired at all.   We miss the 2:30pm shuttle to Aspen Highlands by five minutes.  They only run every half hour.  Then we miss the Apsen downtown shuttle by three minutes.  They only run every 20 minutes.  So it is 4:00pm by the time we reach our hotel.   Waiting or riding in a too-warm, crowded bus in the sun on a winding road for 90 minutes proves to be the most tiring part of the entire hike!

20 thoughts on “Hiking Village to Village — Crested Butte to Aspen”