Hidden Canyon is a popular hike along Zion National Park’s main Scenic Drive.   The 1,000 ft elevation gain and exposed areas are cause for its “Strenuous” rating.  It’s also one of only two hikes I turned back on last year, so it was on the radar to explore this year.   The hike starts out with an aggressive maze of relatively steep switchbacks, up some sheer canyon walls with the aid of chains, and finally reaches a small canyon where the “official” trail ends and the scrambling begins. 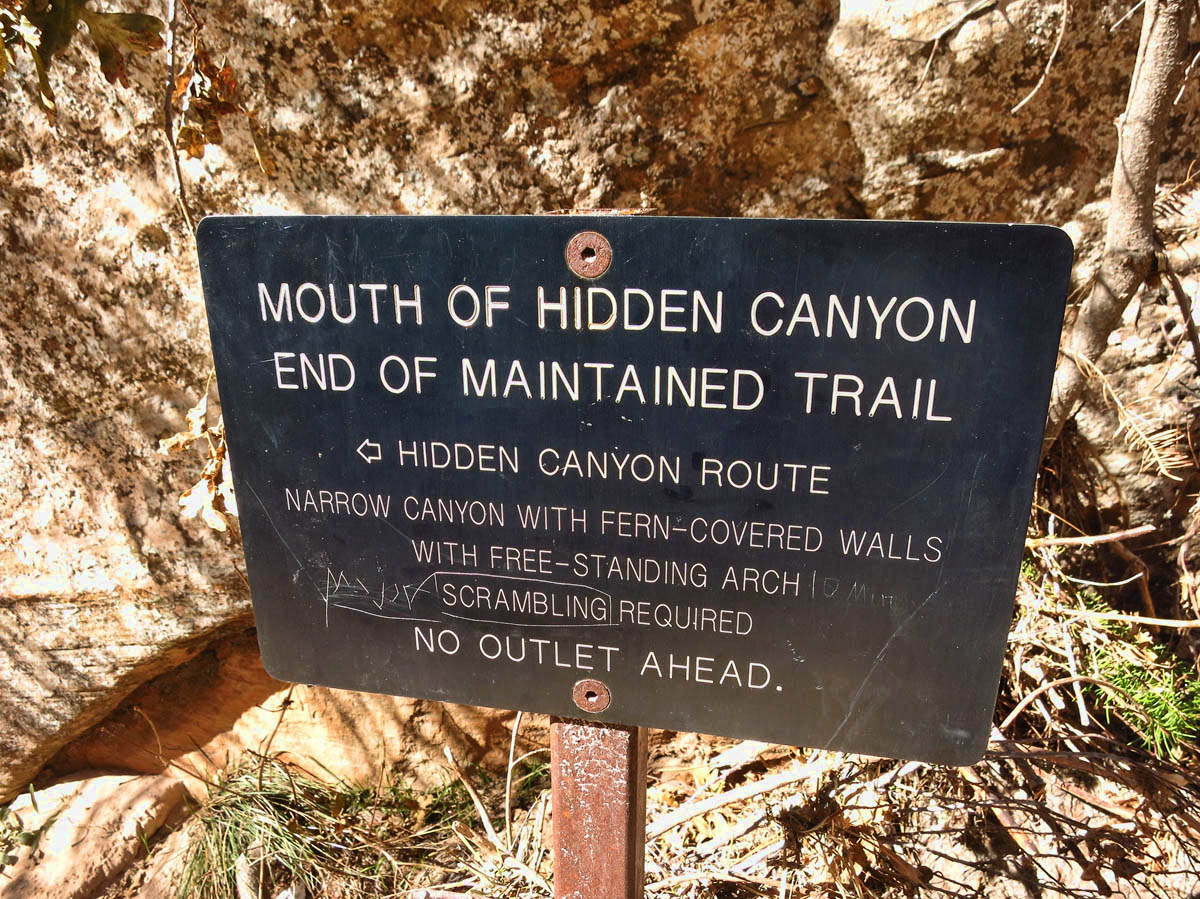 Note someone penciled in the word “major” before the word “scrambling.” 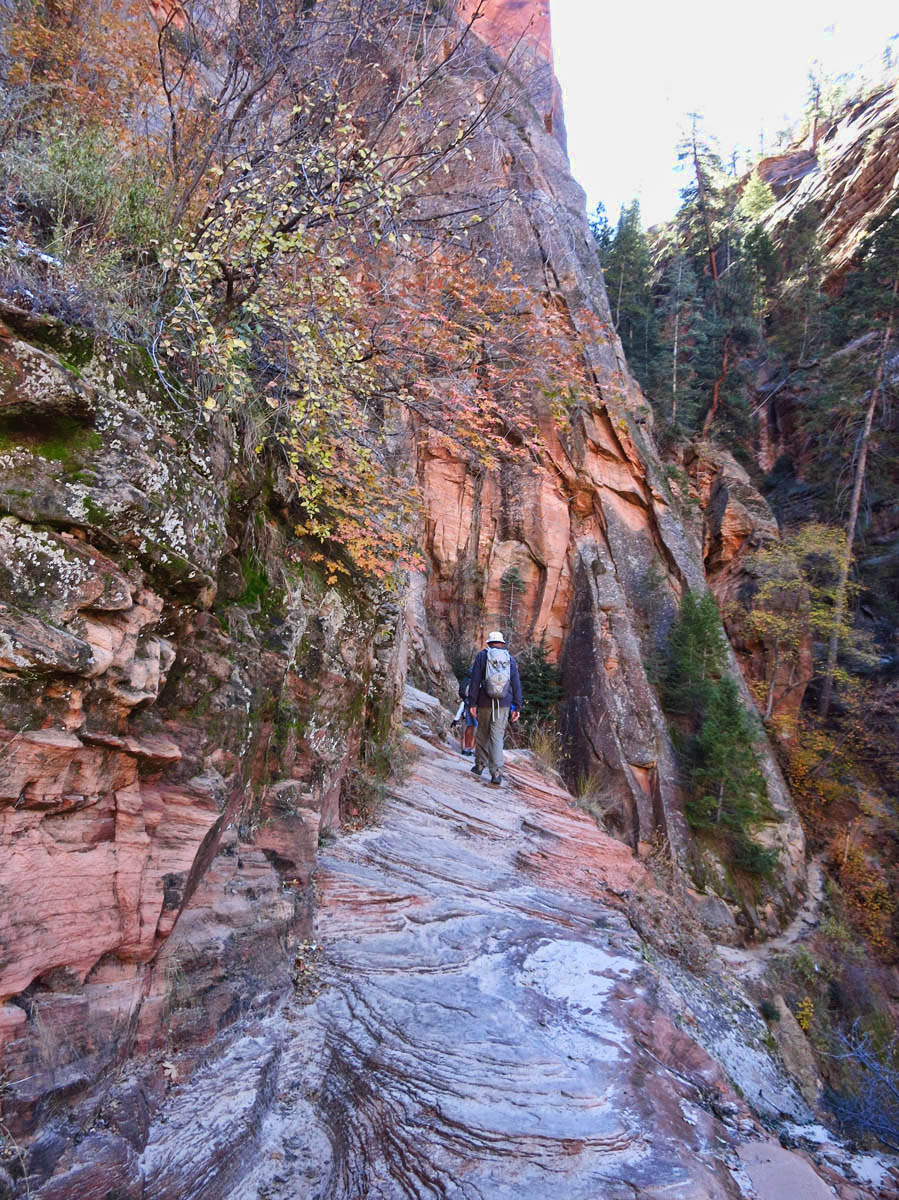 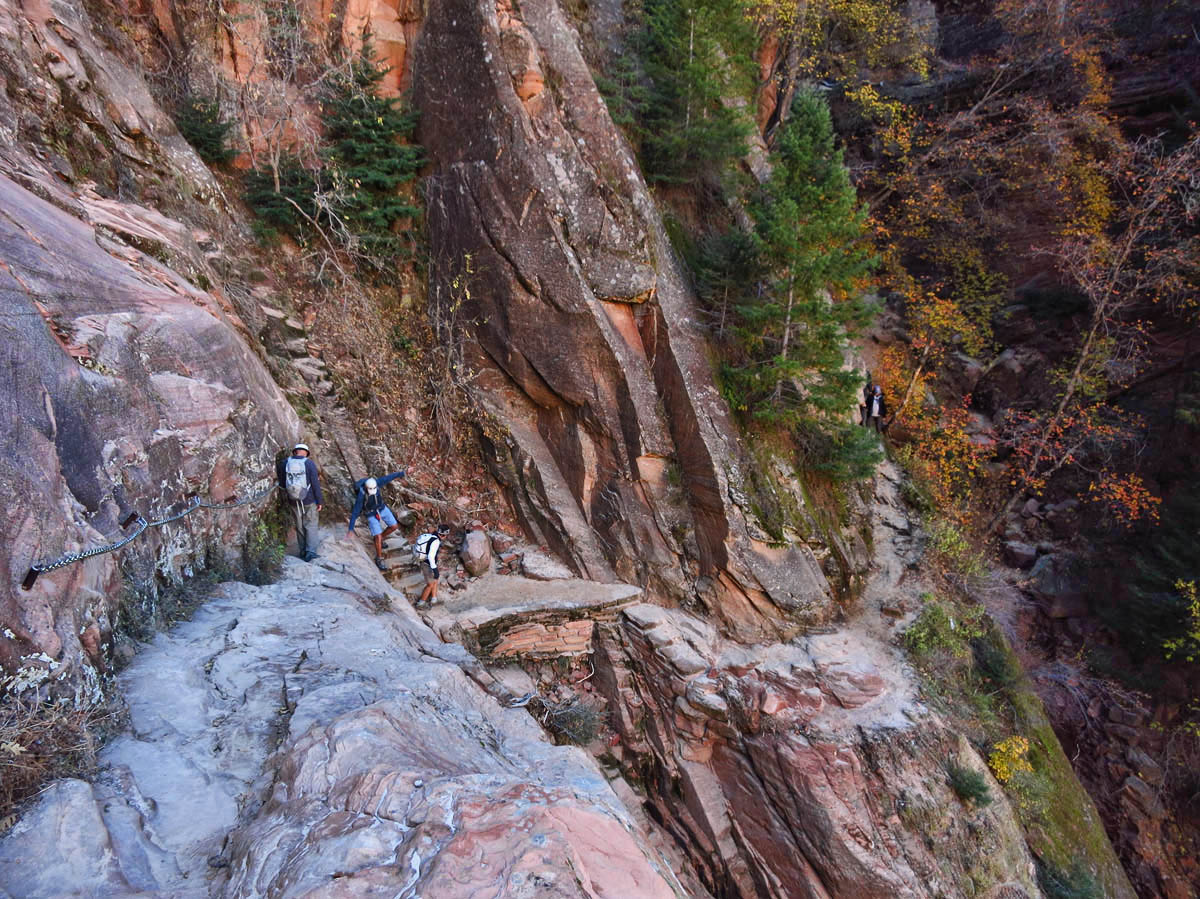 The weather was much warmer last year.  Add to the fact that I was newly retired and sporting about 20 additional pounds of “adipose tissue” from too many years of ten hour days chained to the desk.   The “mountain goats” of the gang (Mark, Bobbie, Jim, Gayle, et al.) were so far ahead of me on the trail that not only had I lost sight of them, but I could no longer hear their laughter echoing from high above.   Debbie and Allison stayed behind to hike with me and provide moral support. 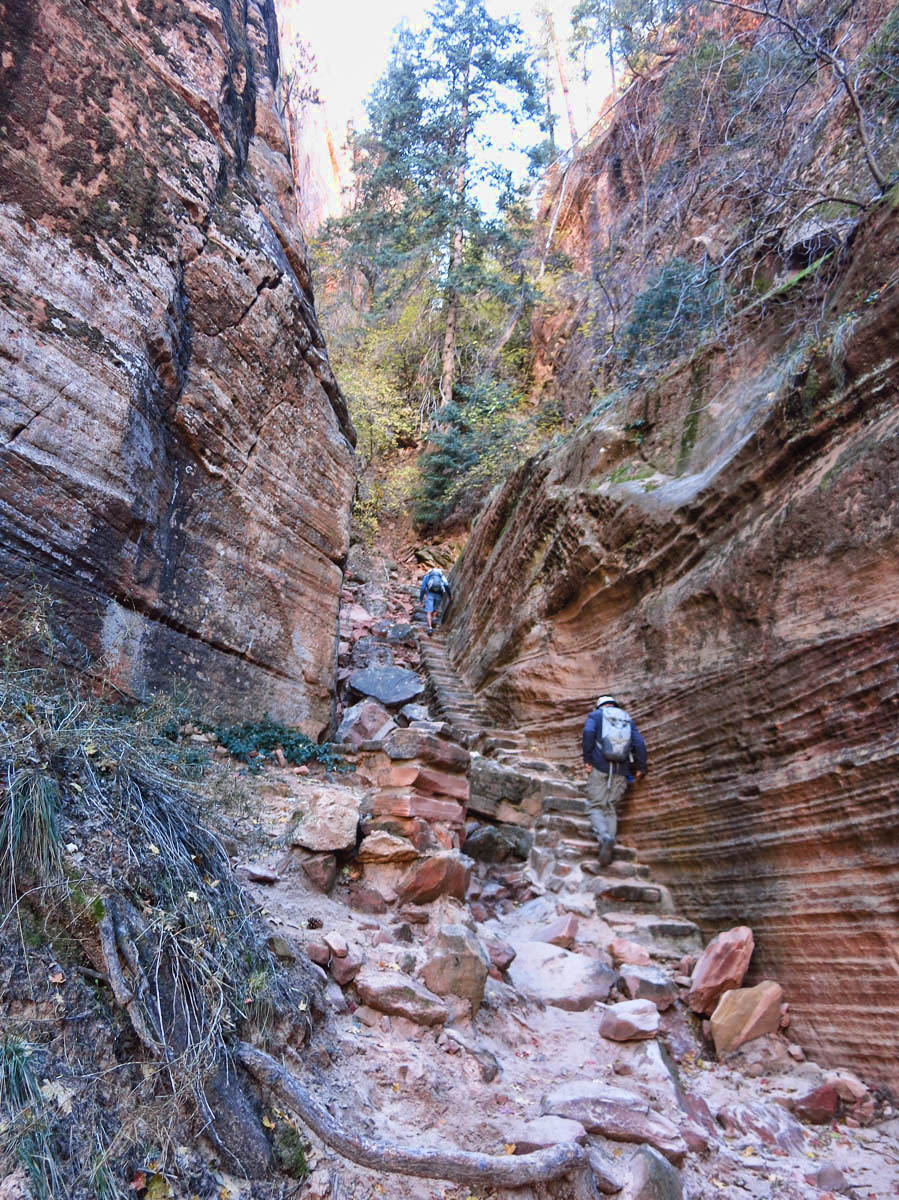 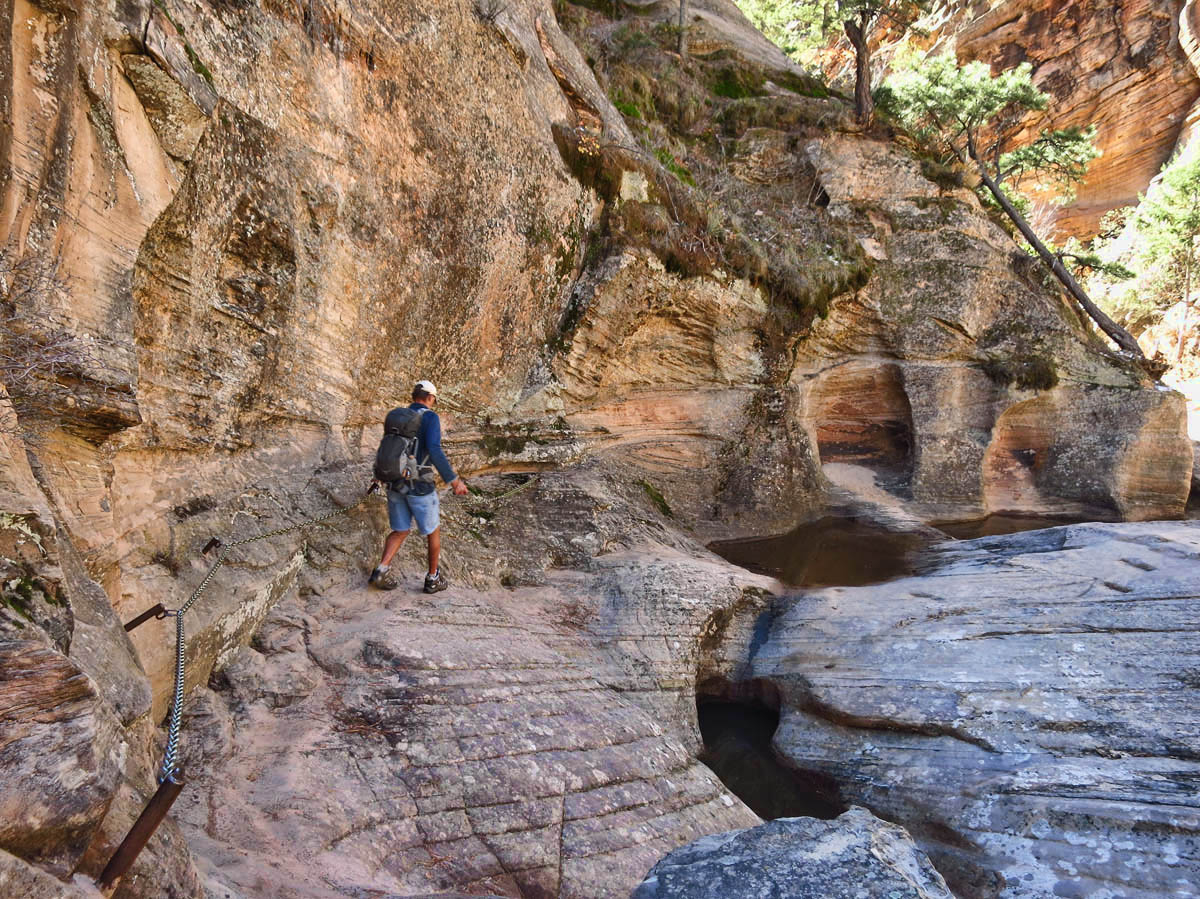 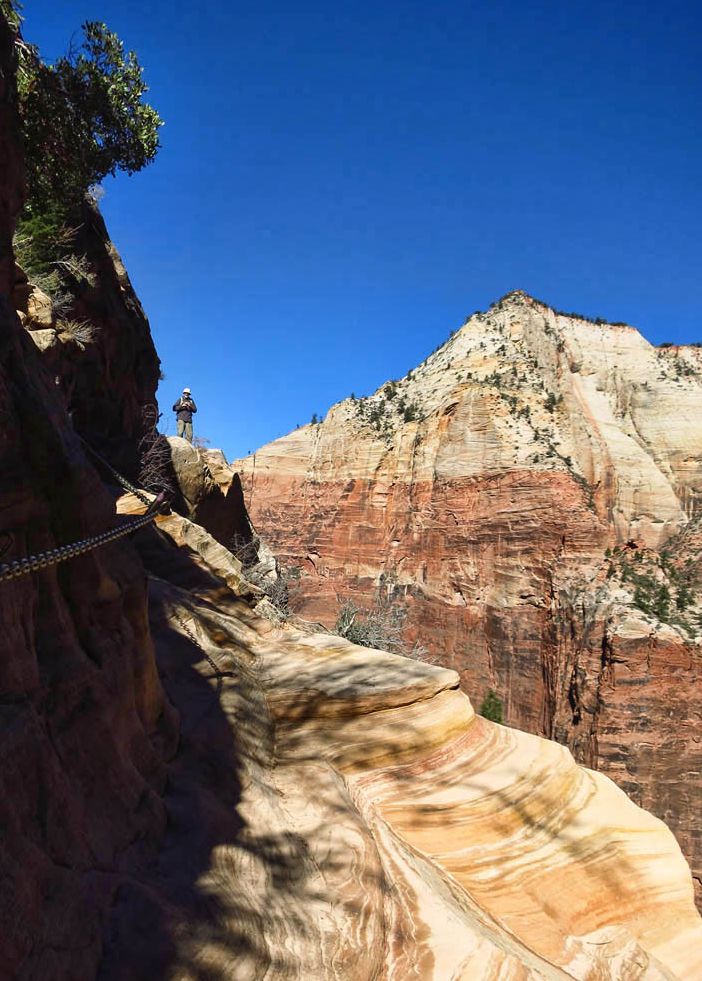 Chris looks down from atop the chained section. (Note chains for climbing aids on left.)

As we climbed up and up and up, what seemed like never-ending, punishing switchbacks doubled back, forcing me to face the pain again and again.  Perspiration was popping out all over my face and head, starting to drip from the end of my pony tail.  My dear friend Allison tried to reassure me by saying, “Don’t feel bad!  I sweat profusely as well!”  She went on to explain this in great detail, while standing there wearing a fleece hat, jacket and gloves.  😉   I was out of my league on all counts.  I gave up and turned around, only to wait in the car for two hours.  Nothing like a couple of hours sitting in a car with no signal and no reading material to motivate me not to turn back on a hike again! 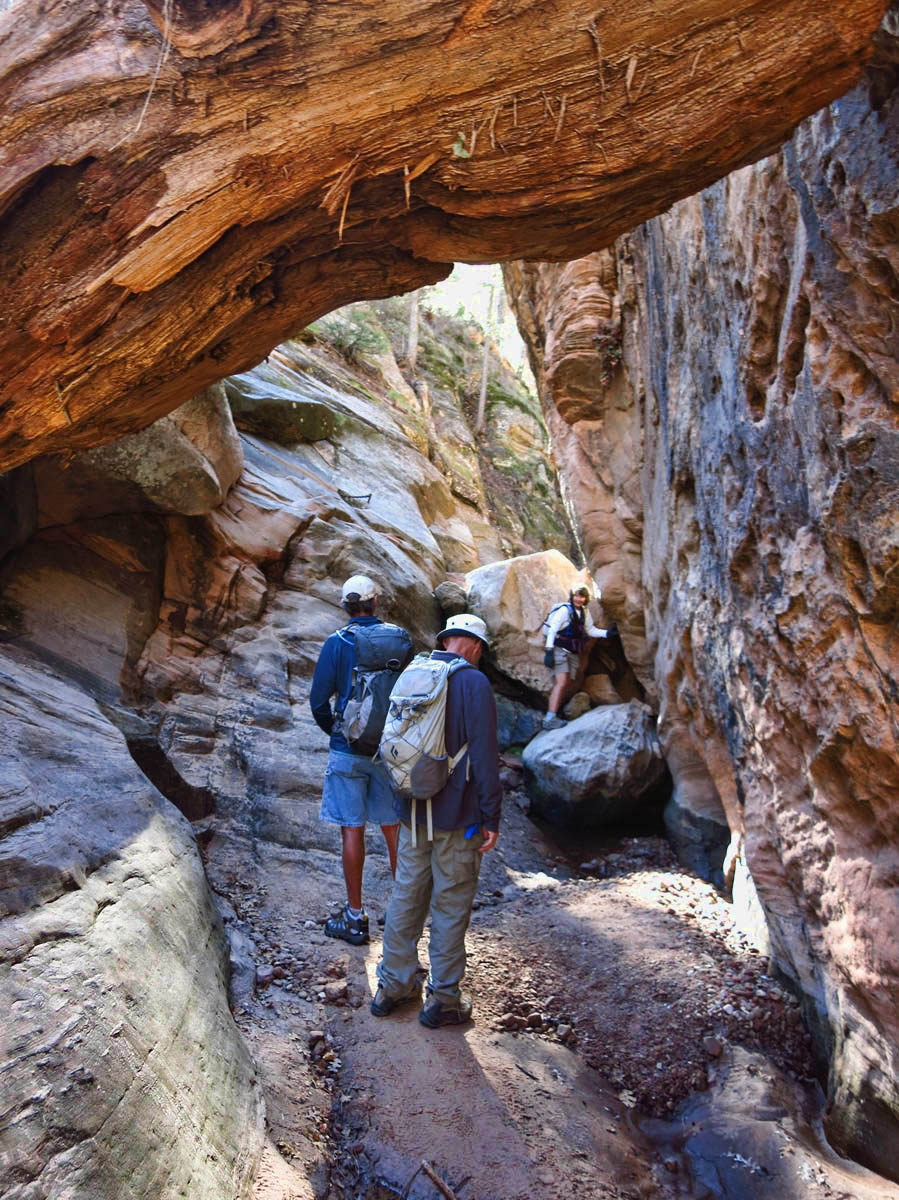 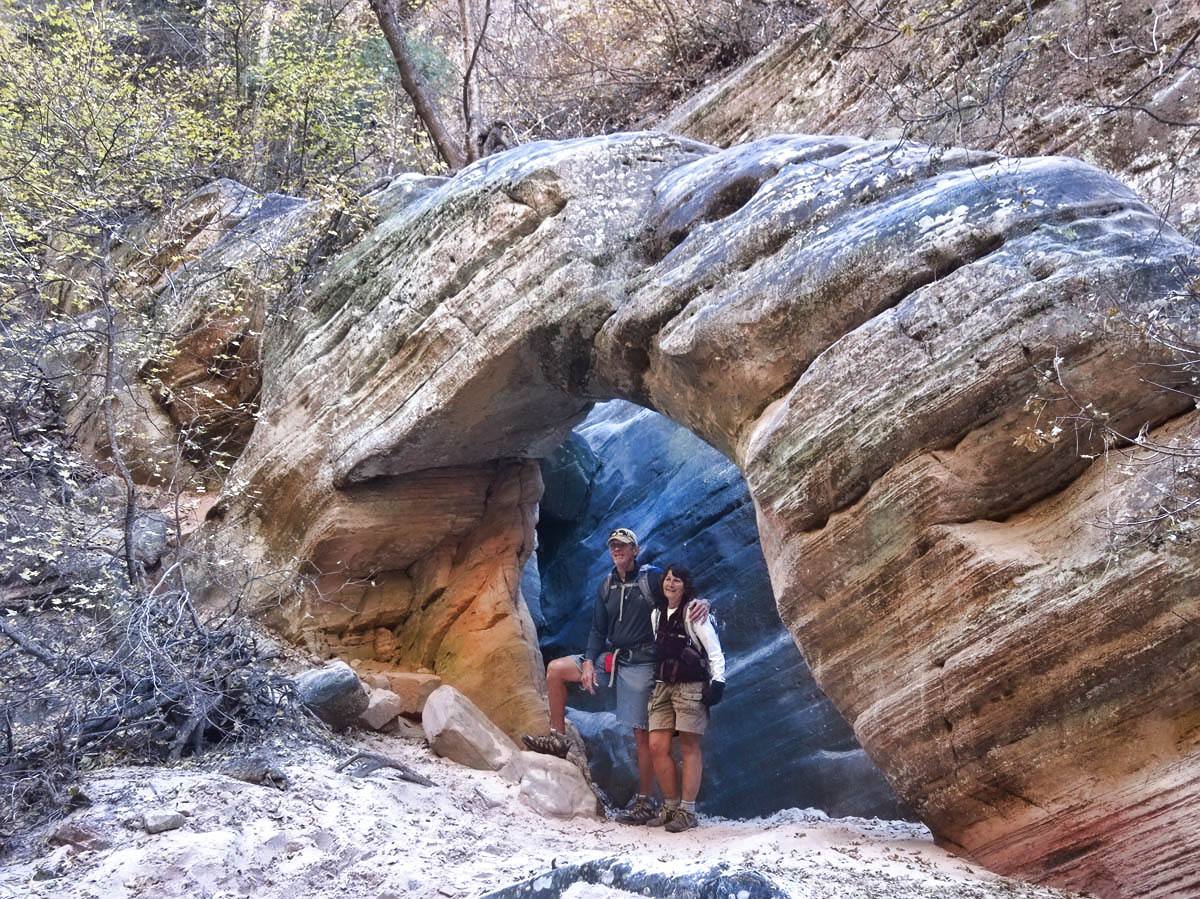 This small, free-standing arch is the turn-around point for many hikers. 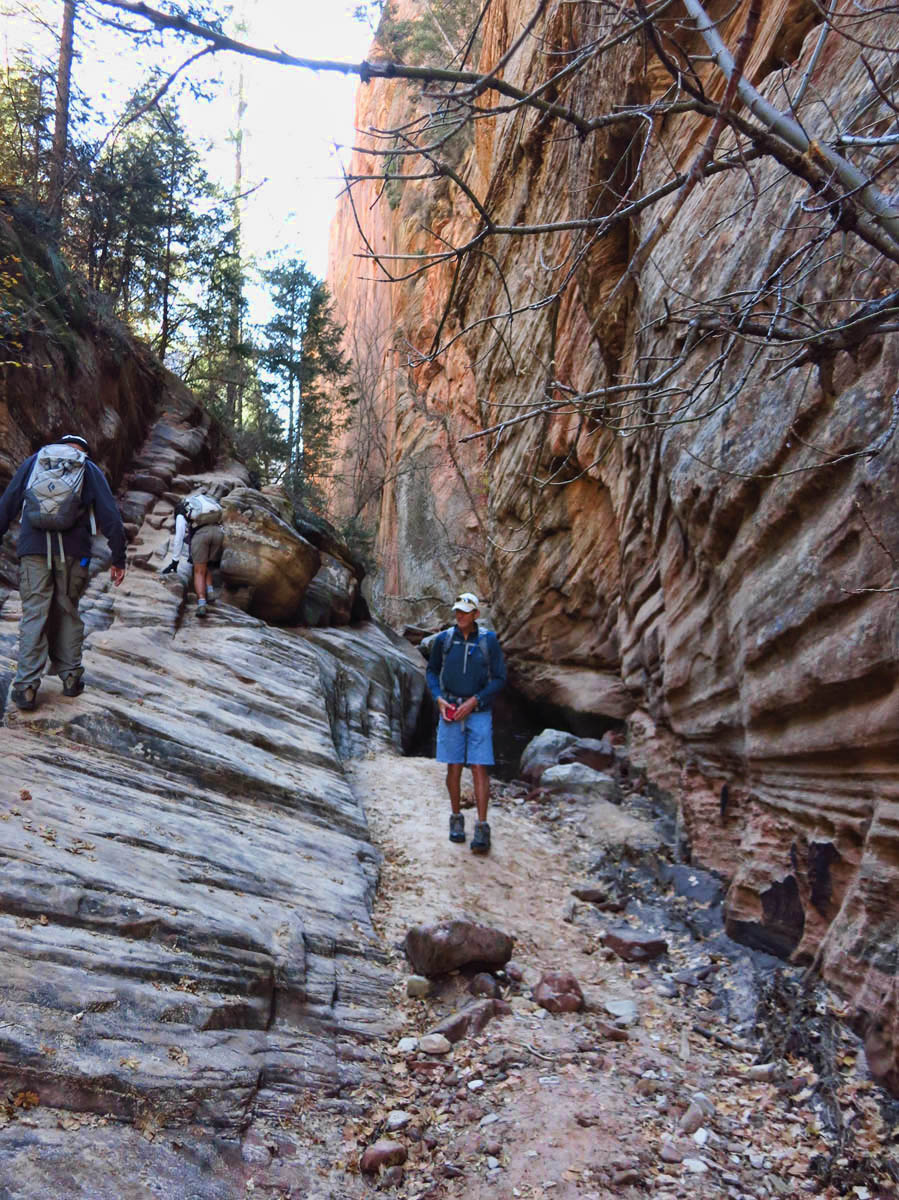 So this year, I was determined that the Hidden Canyon would be hidden from me no longer!  But it wasn’t hidden from many others either, it would appear.  It was only one of two hikes we did along the Scenic Drive in the heart of the National Park for good reason.   Hidden Canyon wasn’t hidden well enough!    As much fun as I find “bouldering” and rock-hopping, having to wait in line to negotiate the obstacle can be a bit of a buzz kill. 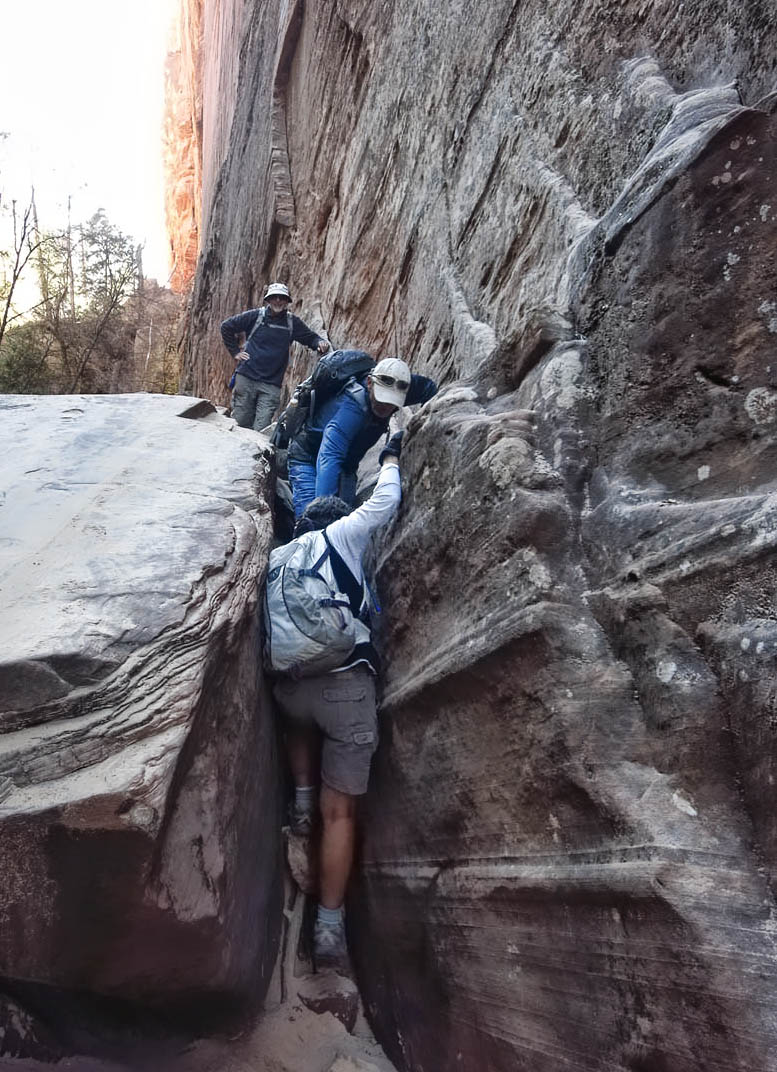 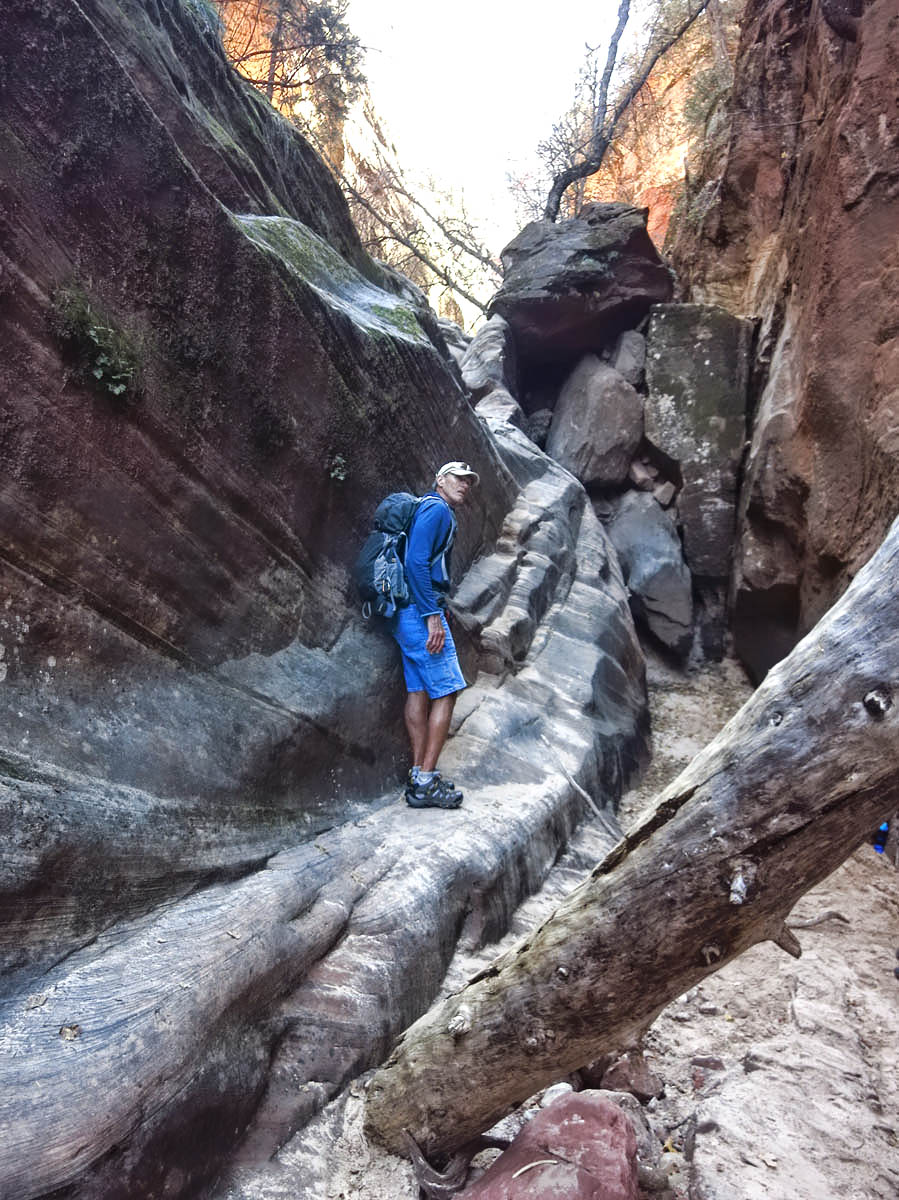 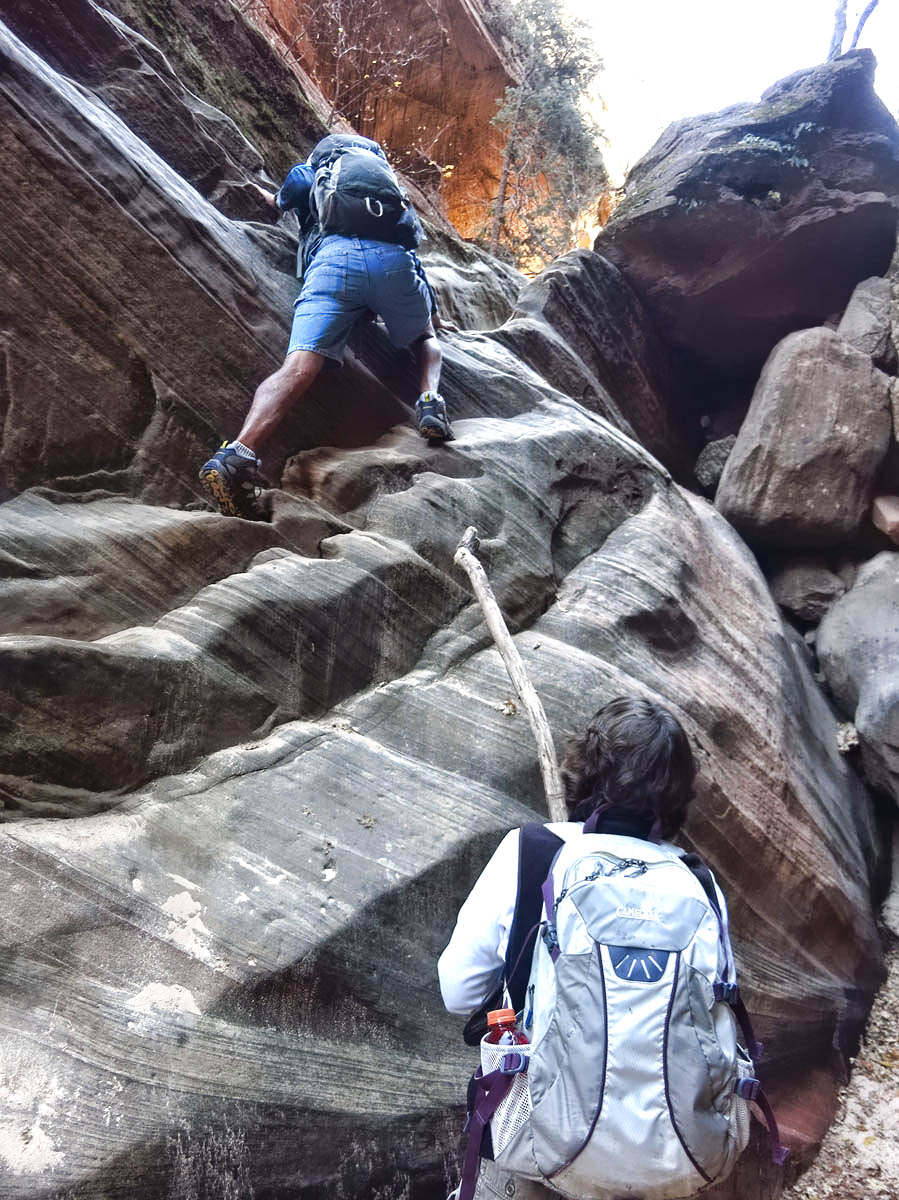 Many have posed the question, “Are we loving our National Parks to death?”   Zion certainly seems to validate that concern.   As number seven out of the Top 10 List of National Parks, Zion is receiving record breaking attendance for the second year in a row, tracking at 17% over the previous record -breaking year.   Since 2010, it’s up 30%.  An estimated 3.5 million people will travel over its signature red roads before the year is up. 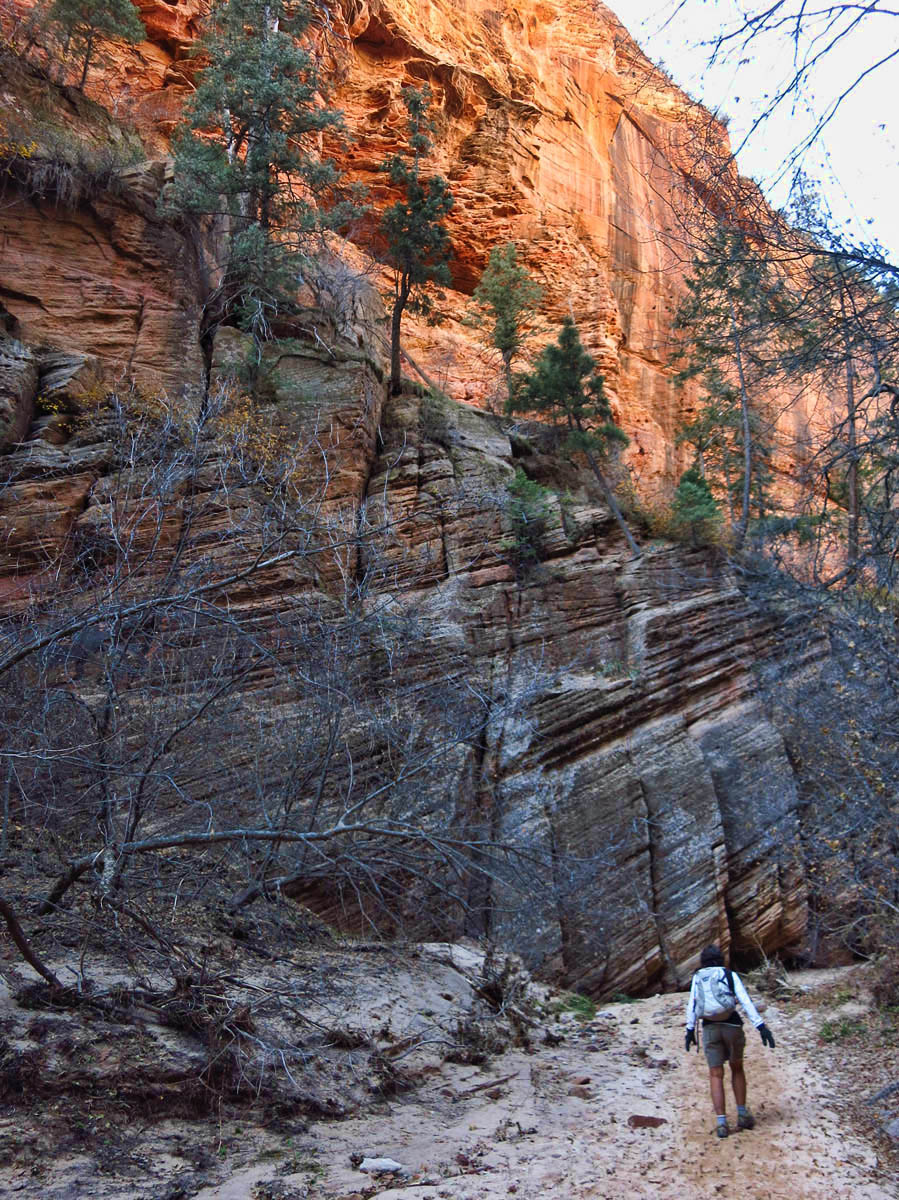 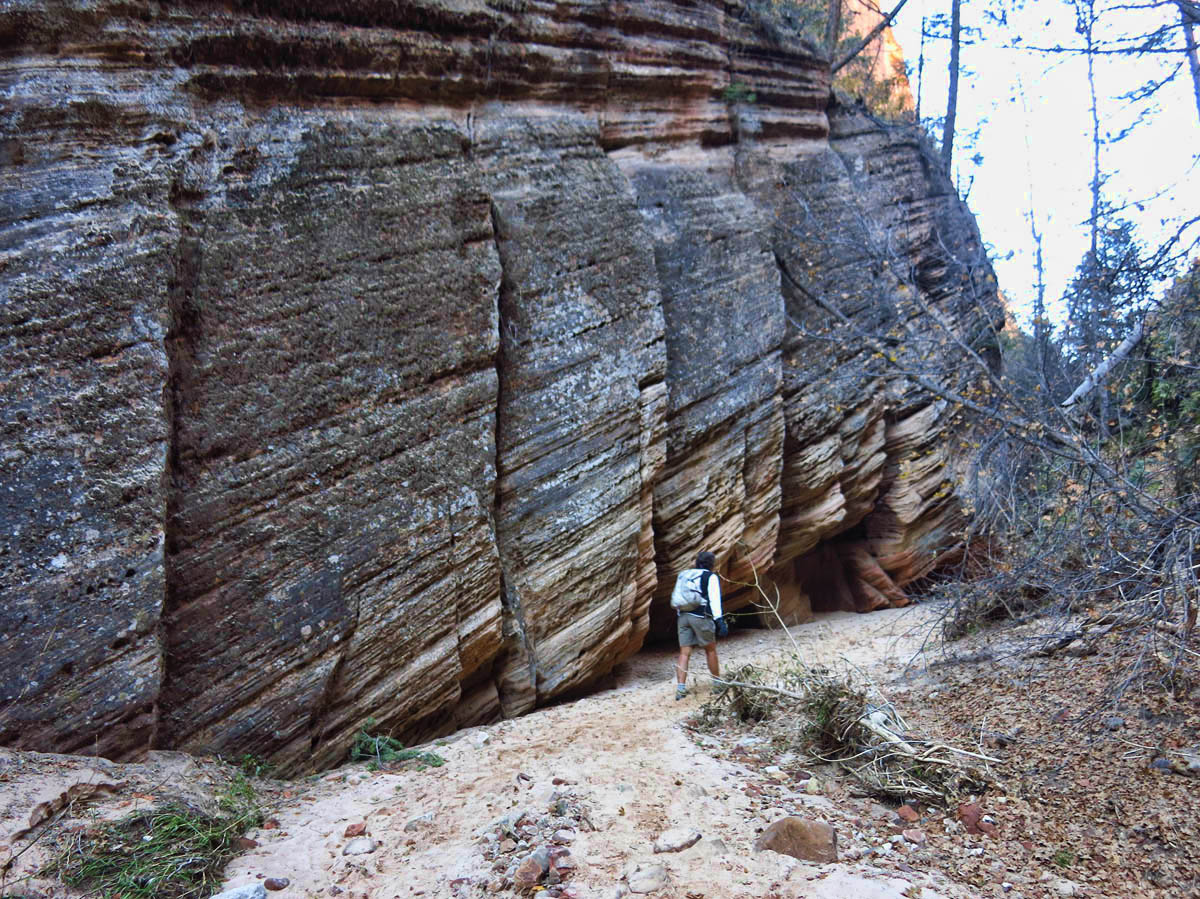 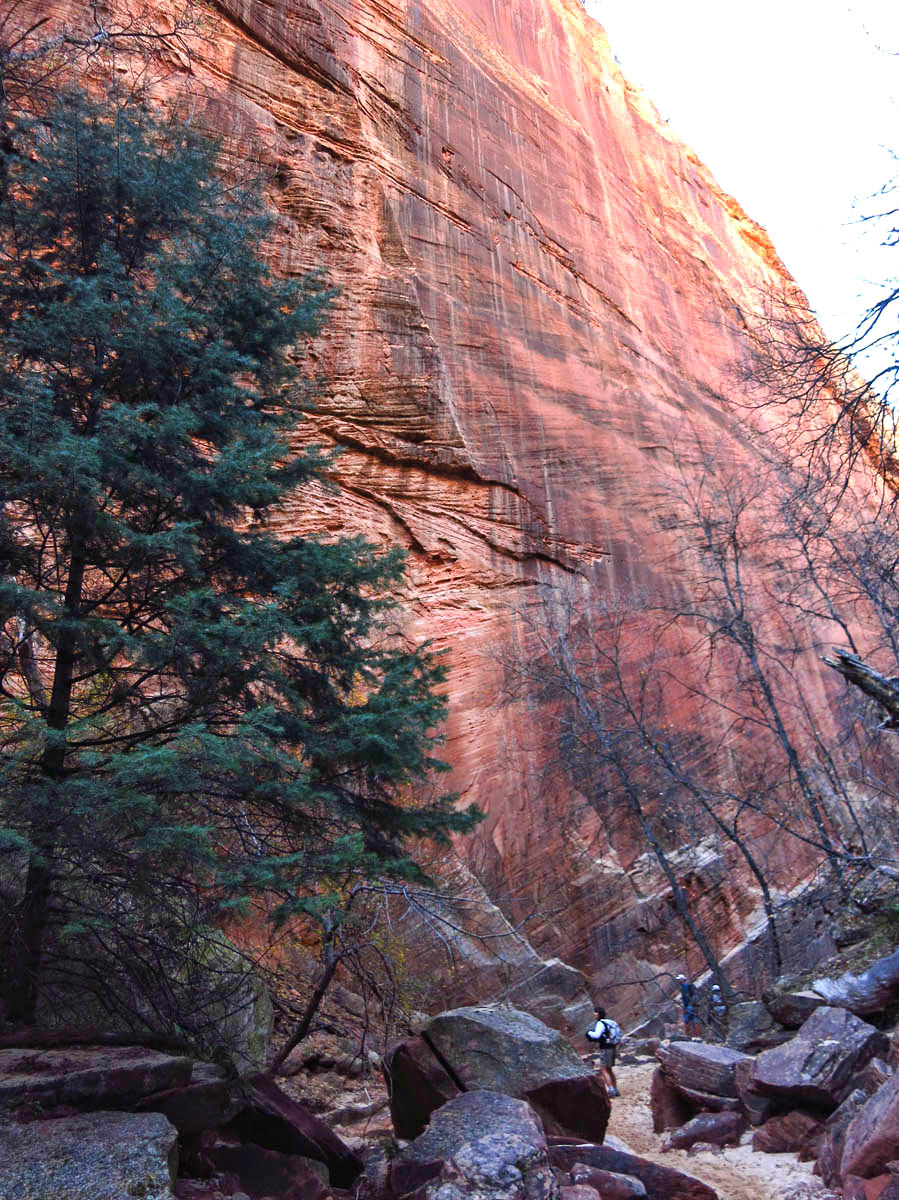 So what’s the solution?  I wish I knew.   The shuttle system sure helps ease some of the traffic.  They had to extend the shuttle schedule a week in Zion due to the unexpected late crowds.  Prices are going up.  It now costs $30 just to enter the park for the day.  And in January, the scenic little Watchman Campground will jump from $18 to $30 per night!  But still, I don’t think that is going to discourage many, as 60% of the visitors are from outside the US, and the foreign dollar goes far these days. 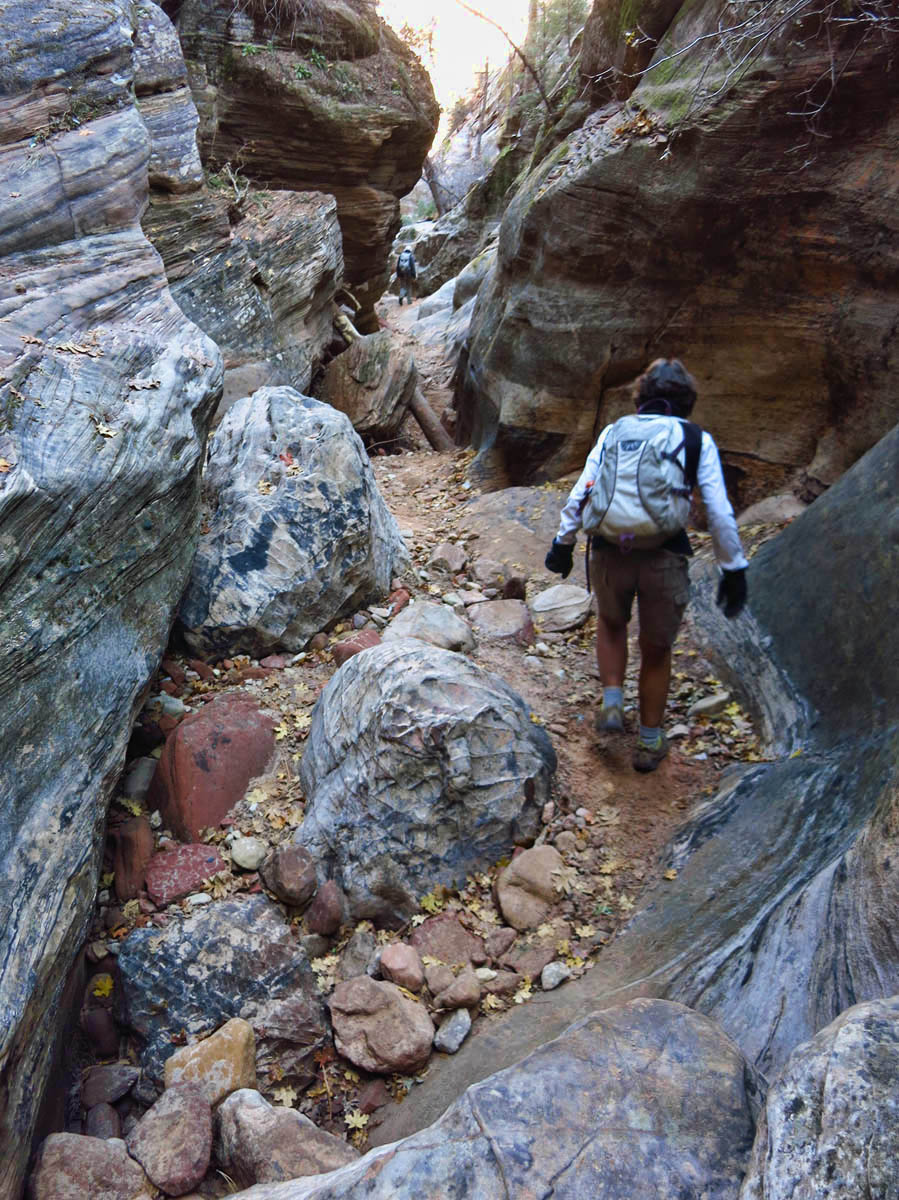 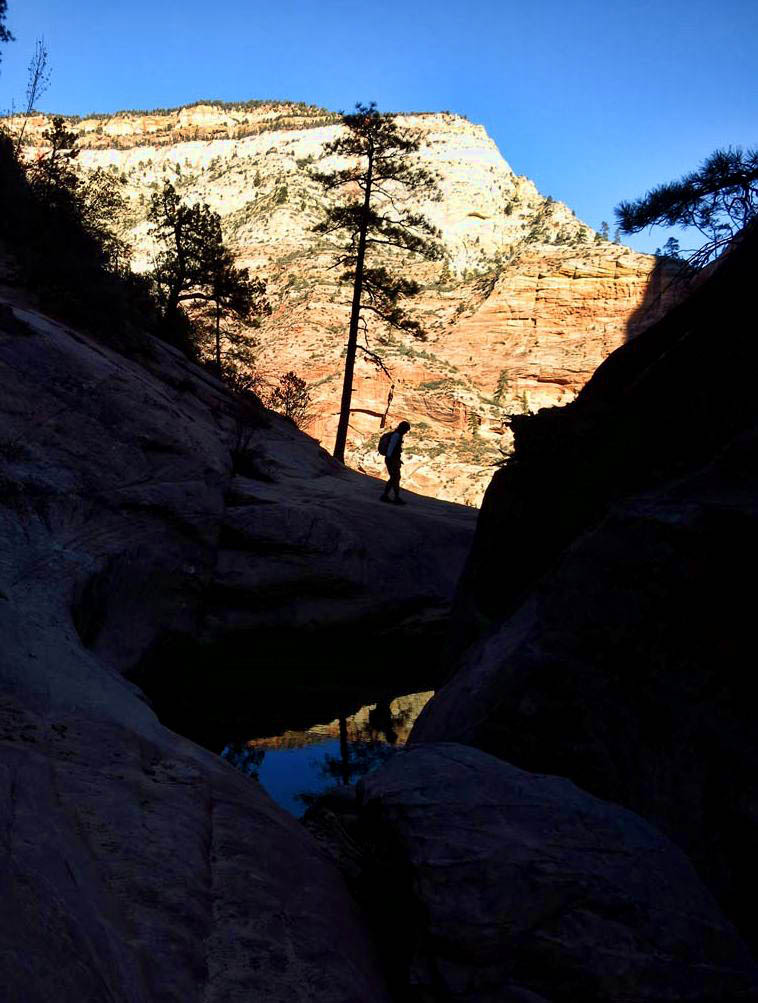 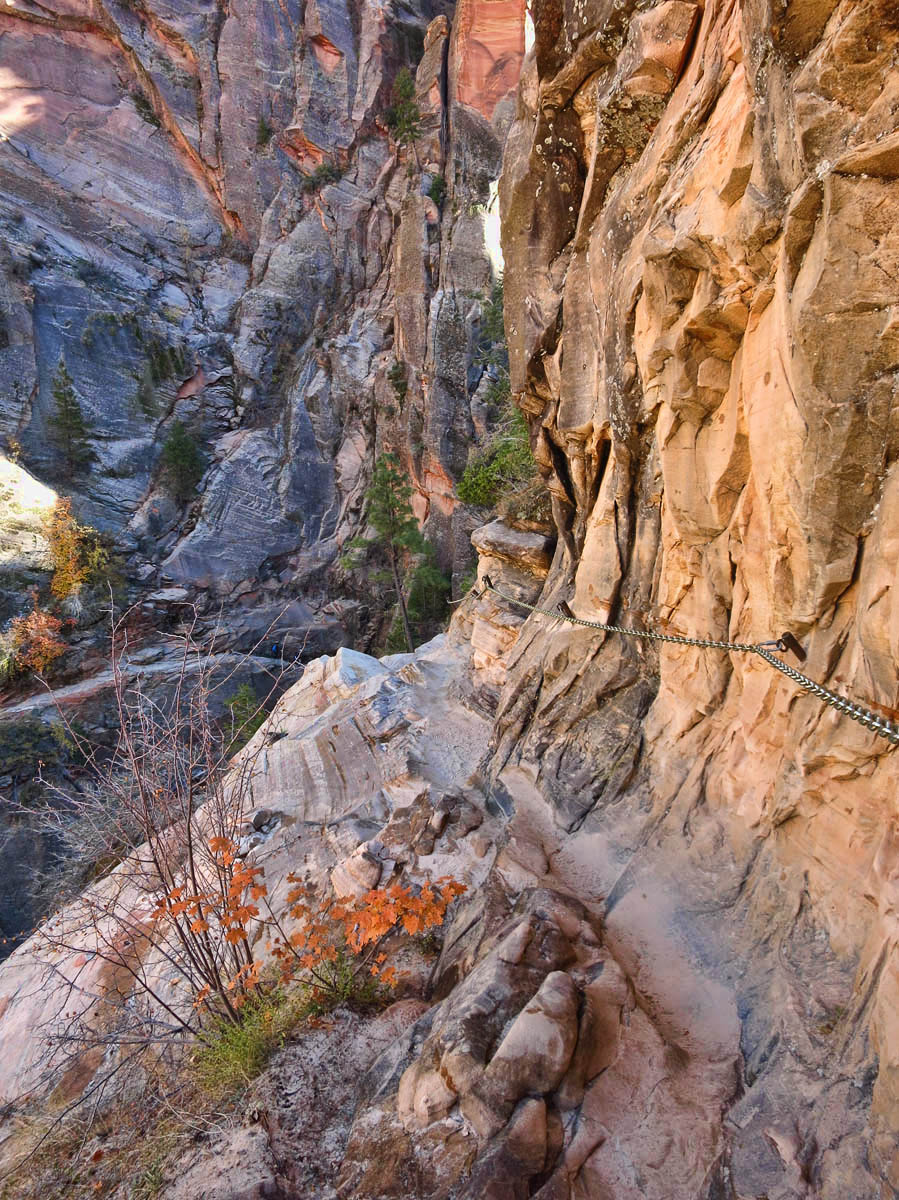 Descending back down the chained section.

Perhaps the NPS would be better served by a little less promotion.  Between the upcoming NPS Centennial, the “Grand Circle” marketing, and Utah’s “Mighty Five” ad campaign promoting the five national parks in Southern Utah, the word is out.   Forget about the “Find your Park”  NPS ad campaign!  NEWSFLASH!  We found it already! 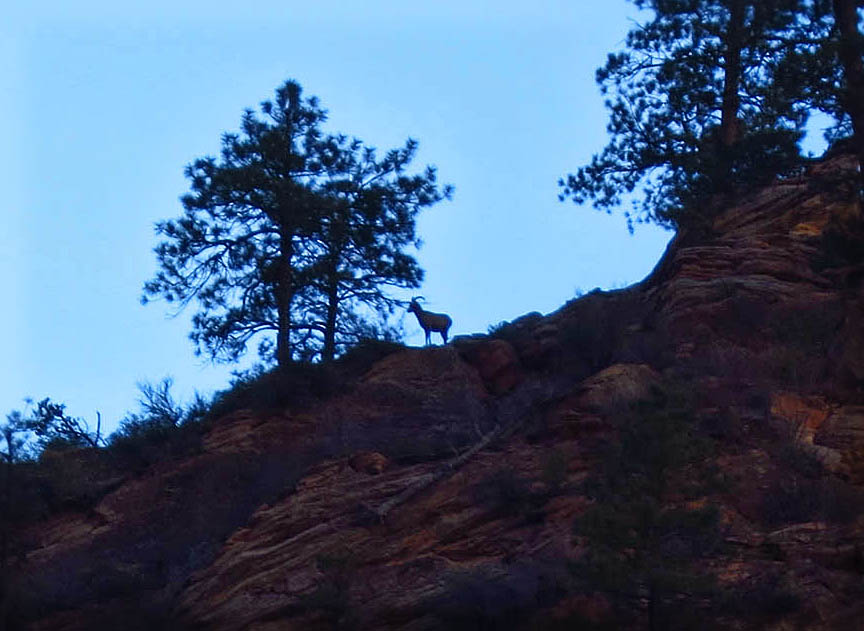 During lunch on the overlook, Chris spots a Big Horn Sheep watching us from the ridge above. 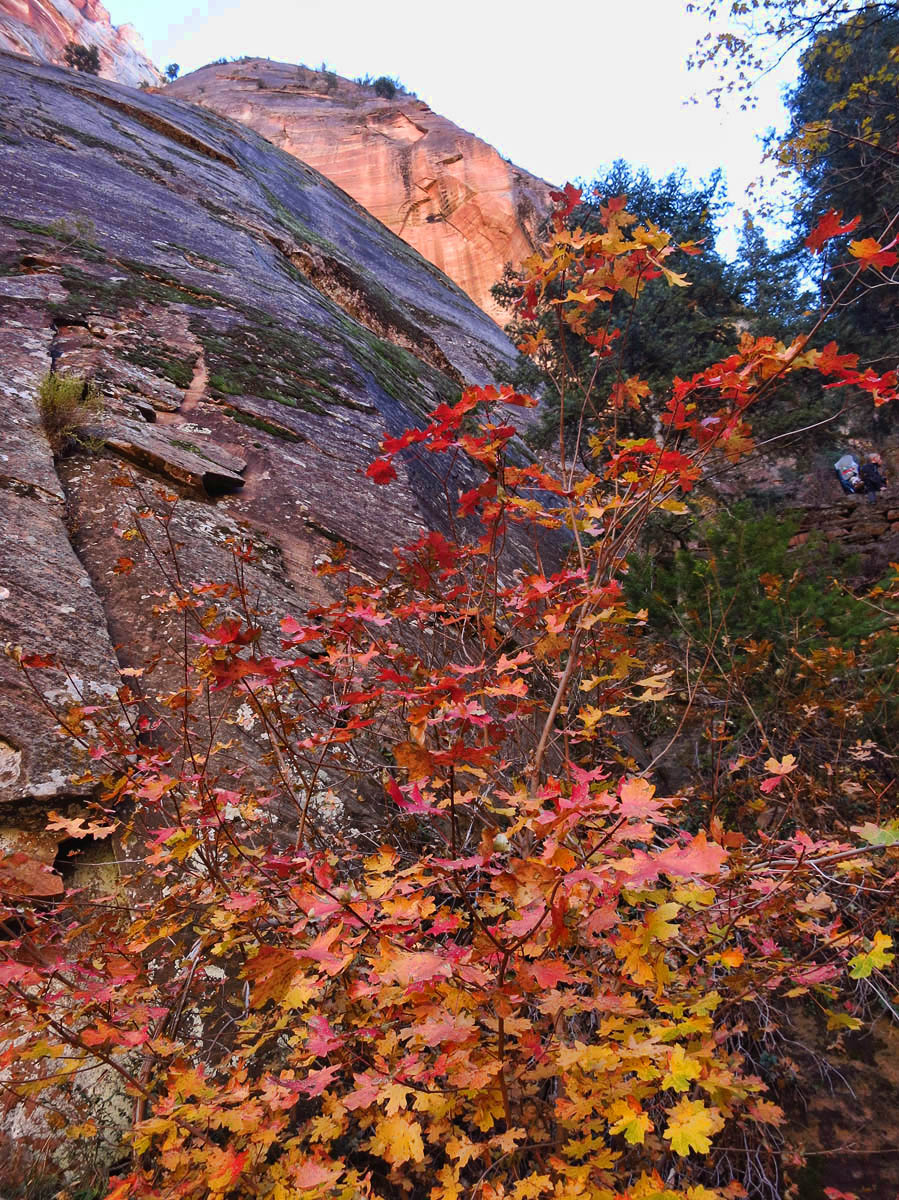 Red maples along the trail remind us autumn is fleeting…