noun, [pen-tuh-men-toh] Painting. The presence or emergence of earlier images, forms, or strokes that have been changed and painted over.

(From Wikipedia) “A pentimento is an alteration in a painting, evidenced by traces of previous work, showing that the artist has changed his or her mind as to the composition during the process of painting. The word is Italian for repentance, from the verb pentirsi, meaning to repent.” 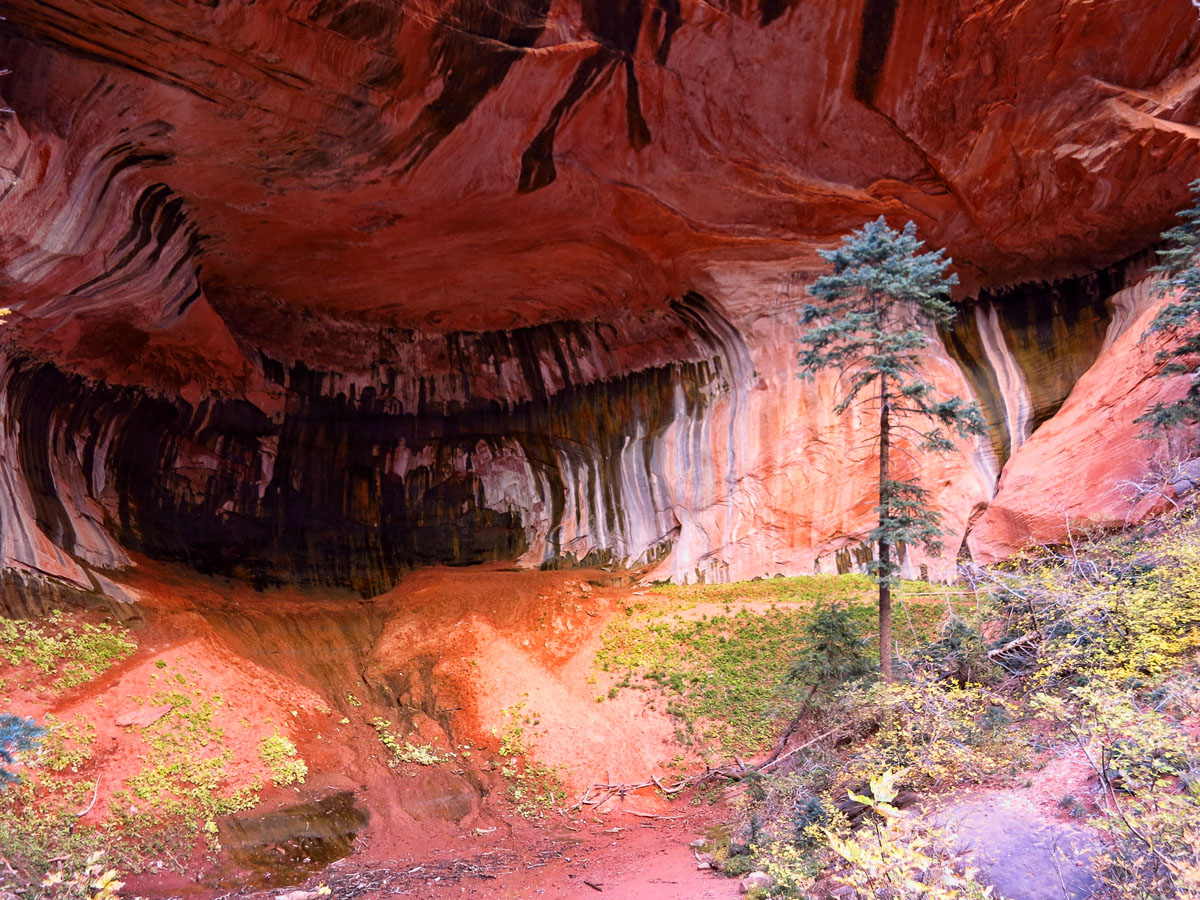 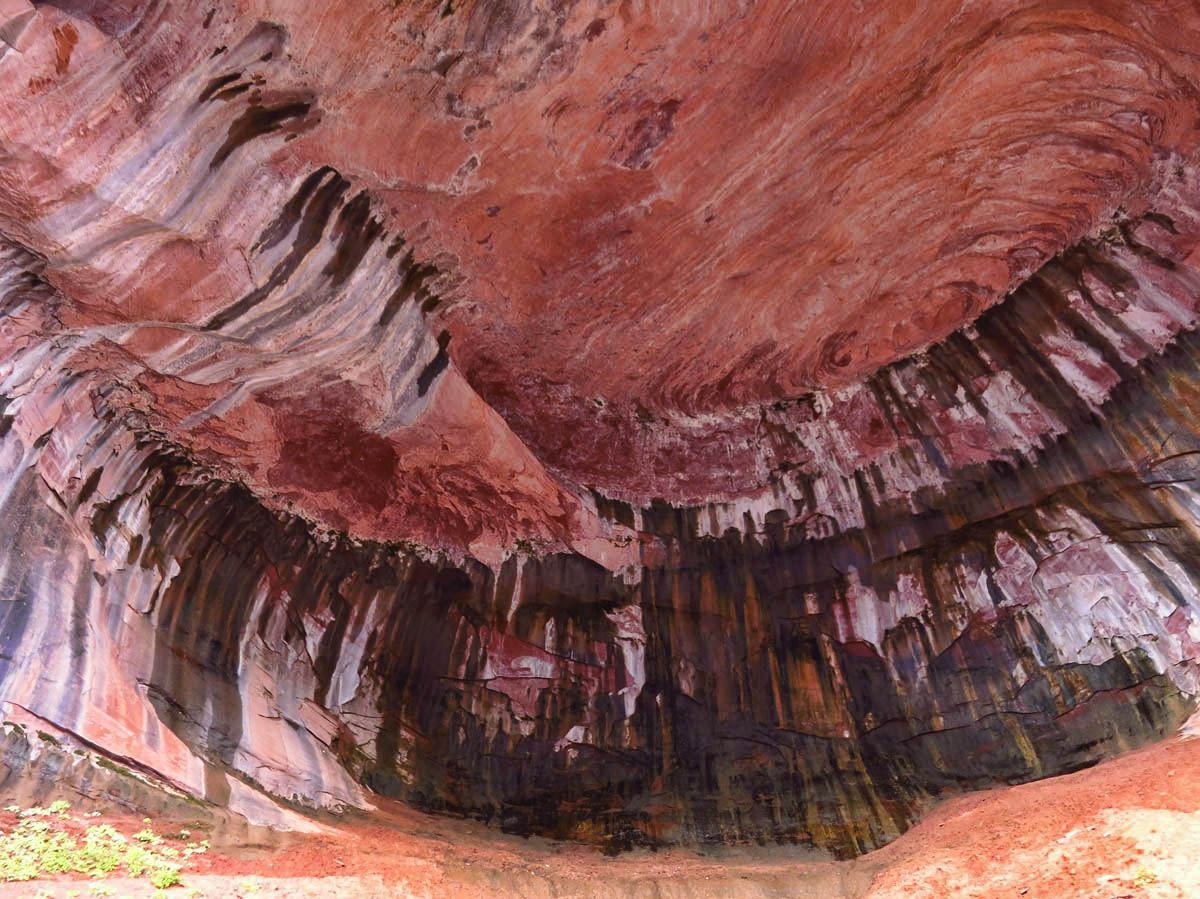 I love this word.   I remember it from Lillian Hellman’s book by the same name.  It’s what I think of every time I see a picture of the little Double Arch Alcove at the end of the Taylor Creek trail in the Kolob Canyons section of Zion National Park.   The alcove is not so small really, until you compare it to some of the vast expanses of towering giants, the painted red rock walls in the main canyon of Zion, which then makes Double Arch Alcove seem like a painting in miniature.   But to stand and study it in detail makes me think of Nature’s pentimento.  It’s as if she had but this one small canvas…yet couldn’t decide what to make of it.  So the wall contains layers and layers of variegated brush strokes over the curved arch of canvas, each stroke covering previous attempts to adorn the landscape beneath it. 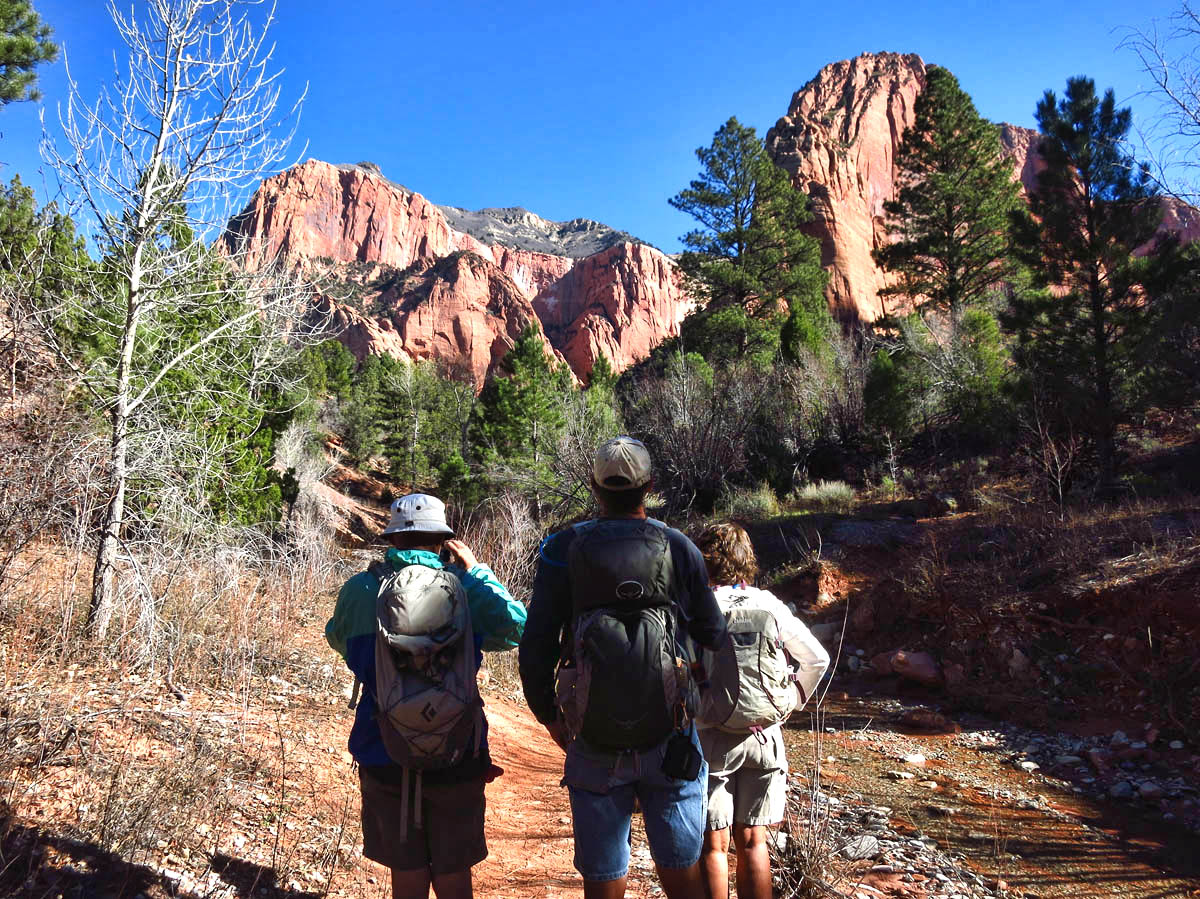 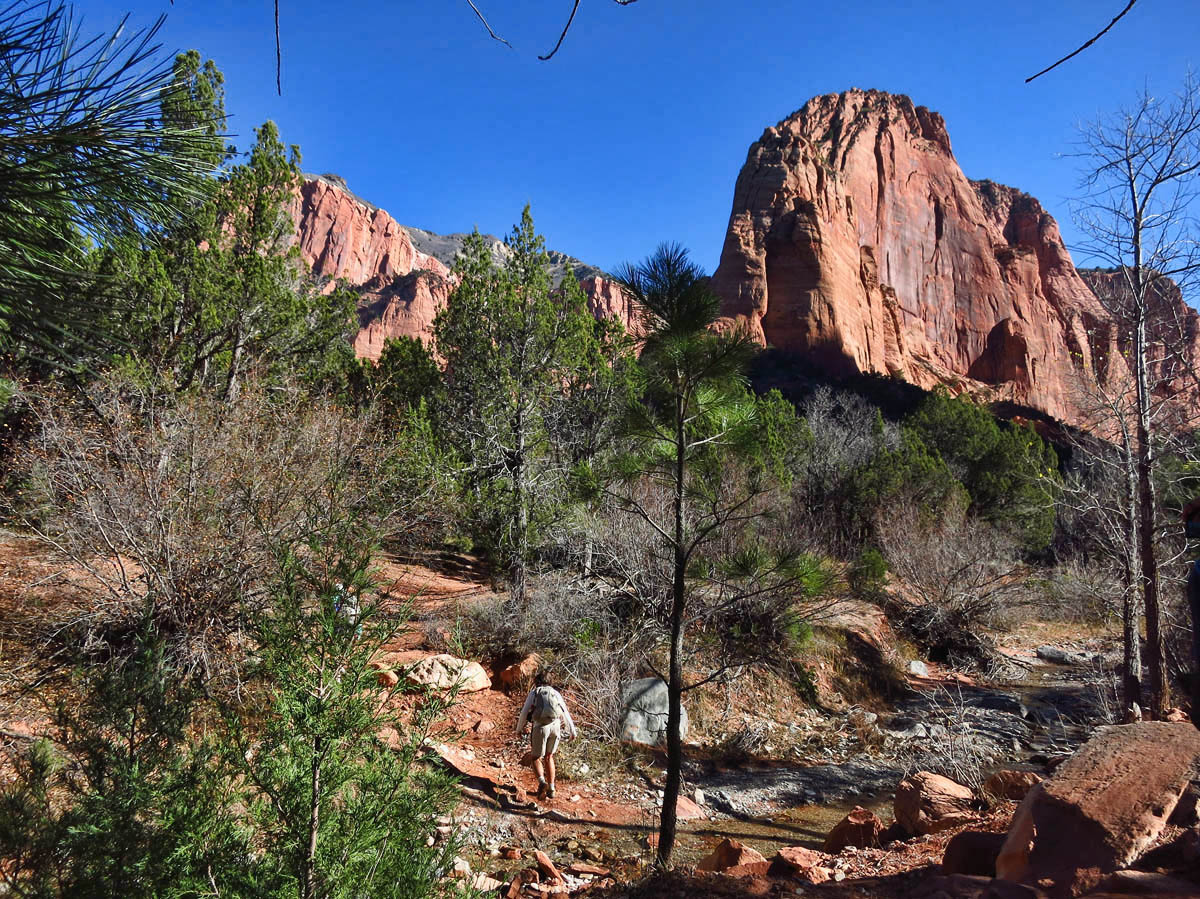 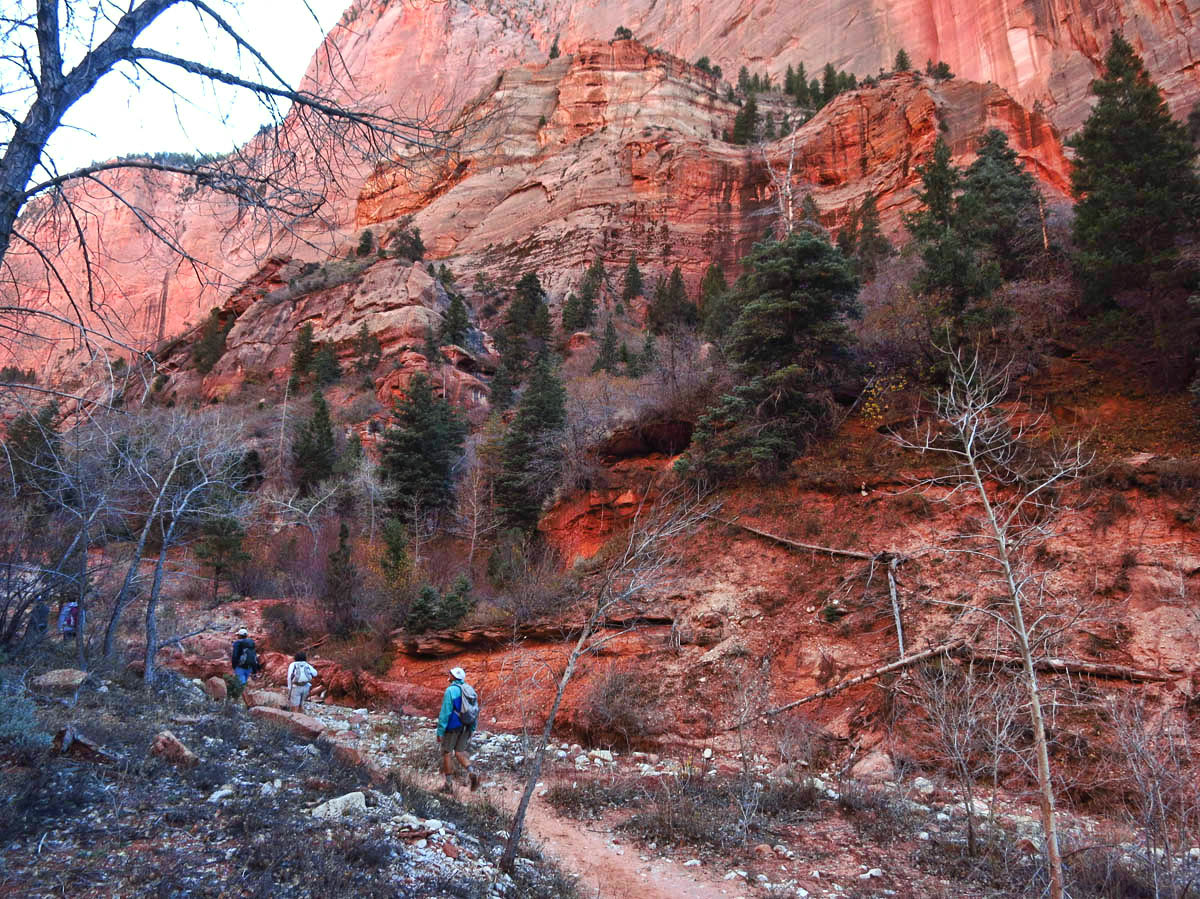 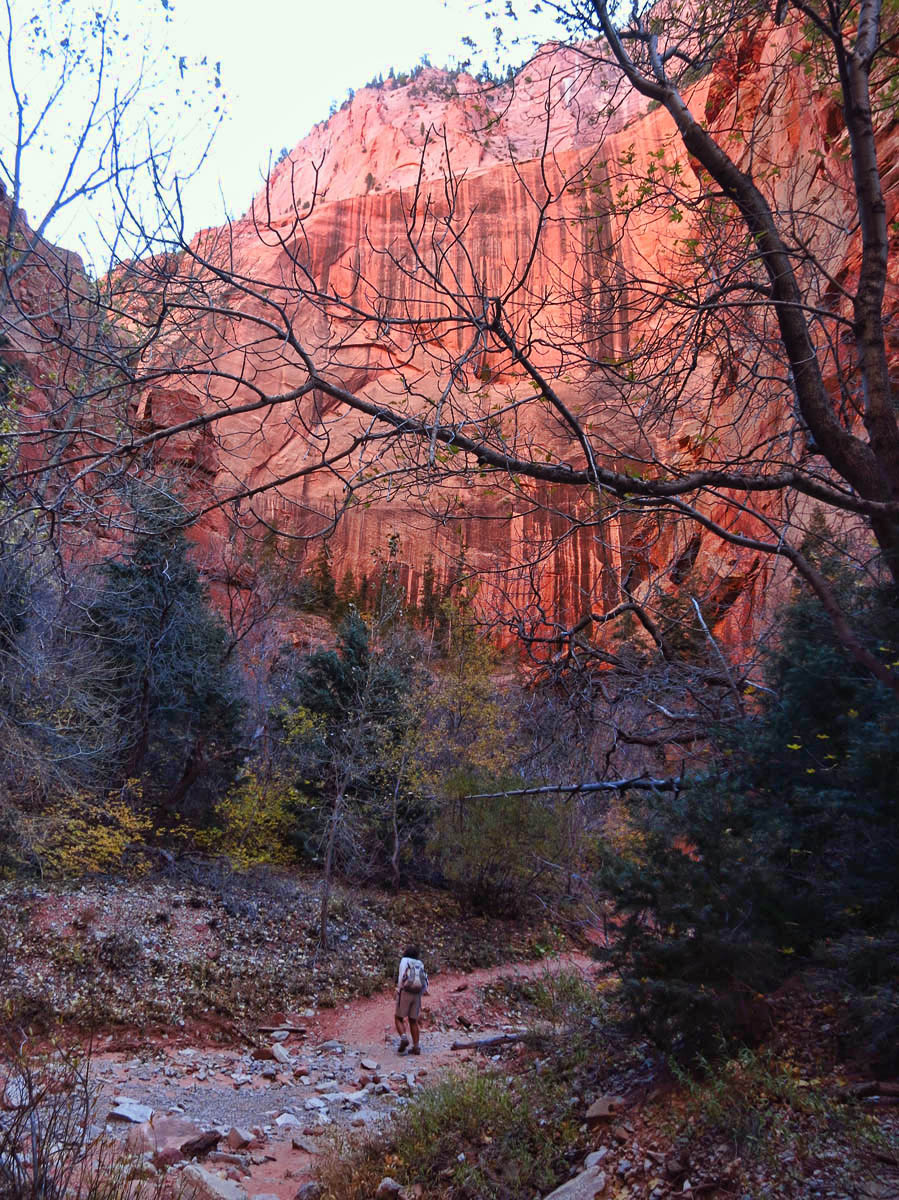 The Taylor Creek trail is located in the much lesser trafficked Kolob Canyon section of Zion National Park.   Although it shares a common boundary with the main part of the Zion, we must drive out to the I-15 freeway and go 40 miles north to a separate entrance to access this section of the park.  It’s my first visit to this area which is known for greater wilderness, fewer tourists.  But given the lack of maintained trails, Taylor Creek turns out to have the most people we have seen thus far.   Still, it’s a fun, easy trail, as it crosses the stream between 30 and 40 times according to the trail description.

There have been lots of conversations on the trail this year about “color.”   Some hues just seem outrageous, more so than I remember from last year.  Particularly the blues of the skies and the intense reds that come about as a result of a cold, clear autumn day.   Attempts to describe the hues have spurned labels like “Impossible Blue” and “Surreal-ean Blue” (Cerulean) as we grapple with a way to describe the depth and intensity in Zion’s palatte. 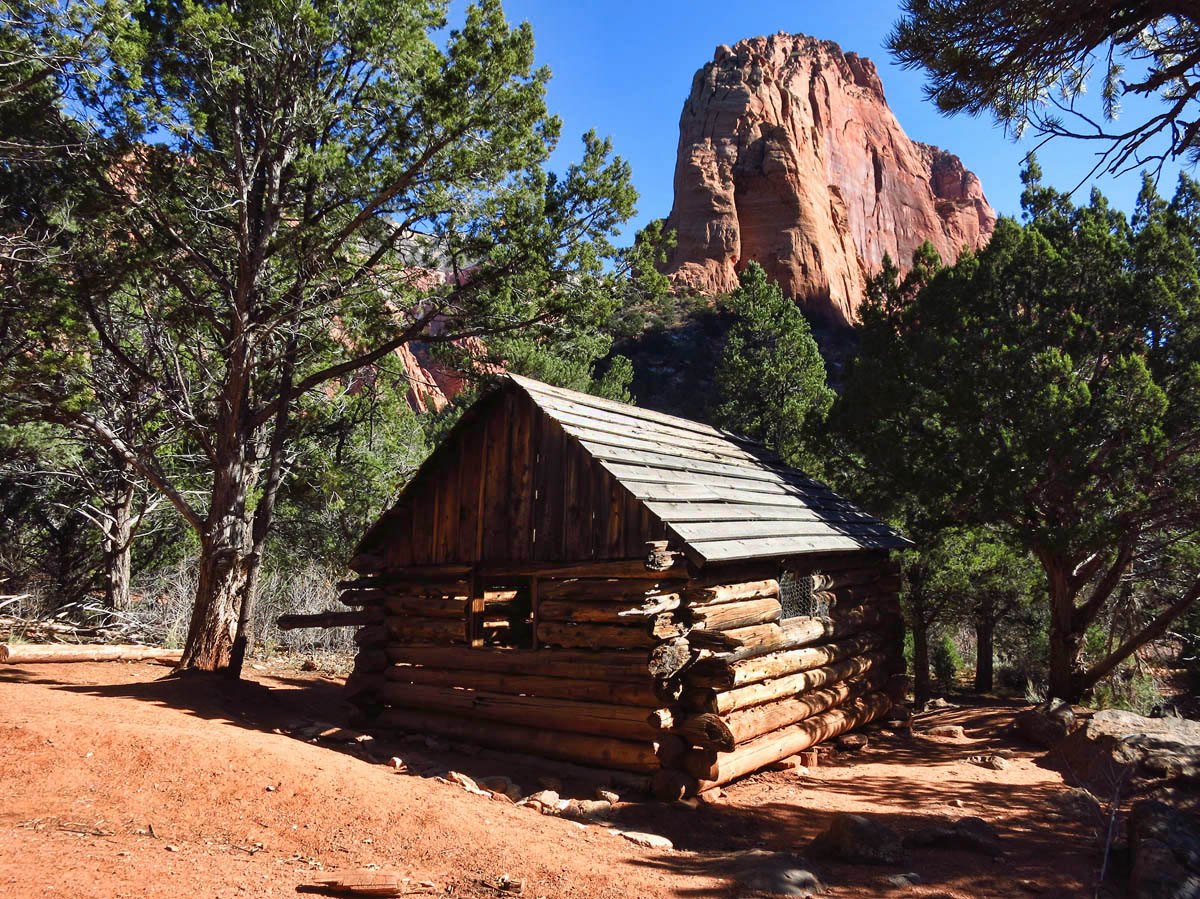 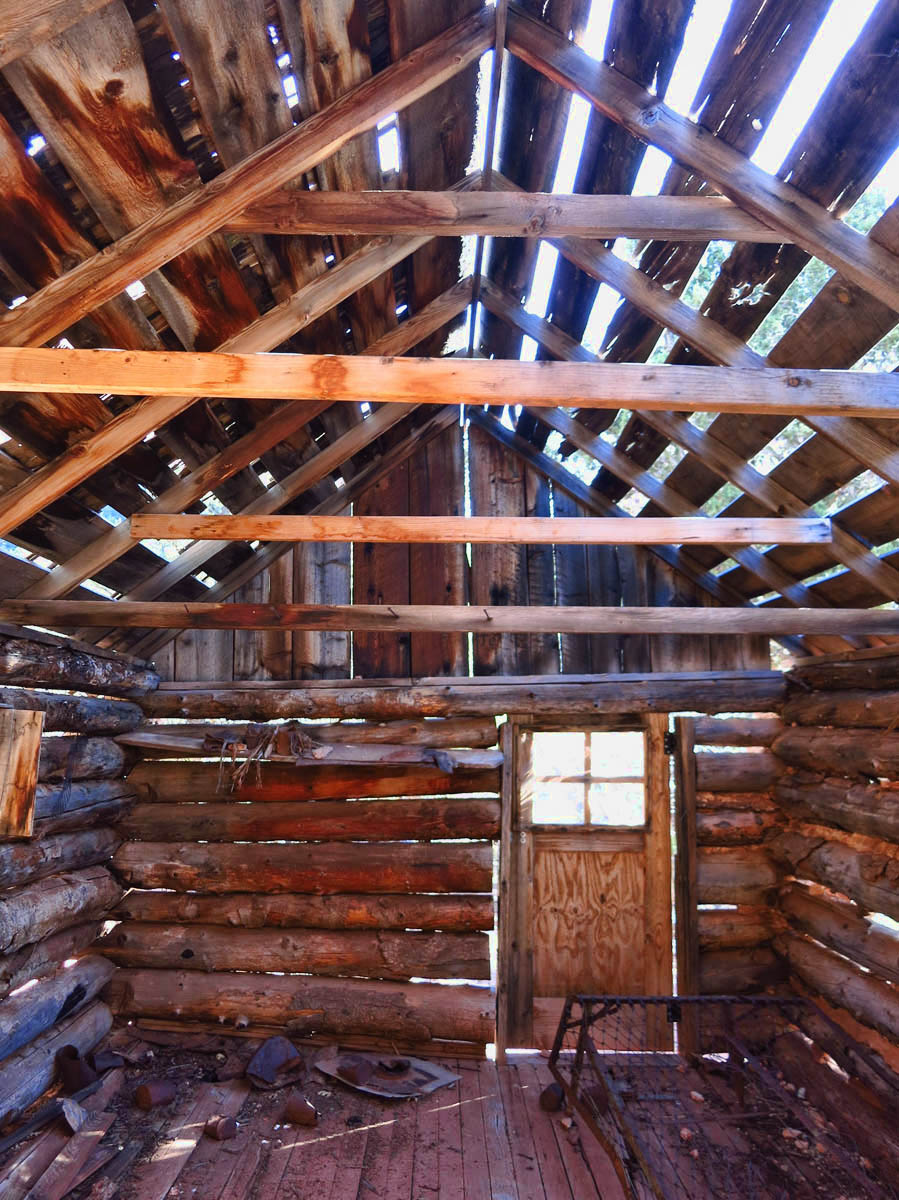 Homesteaders raised sheep and goats along the creek. 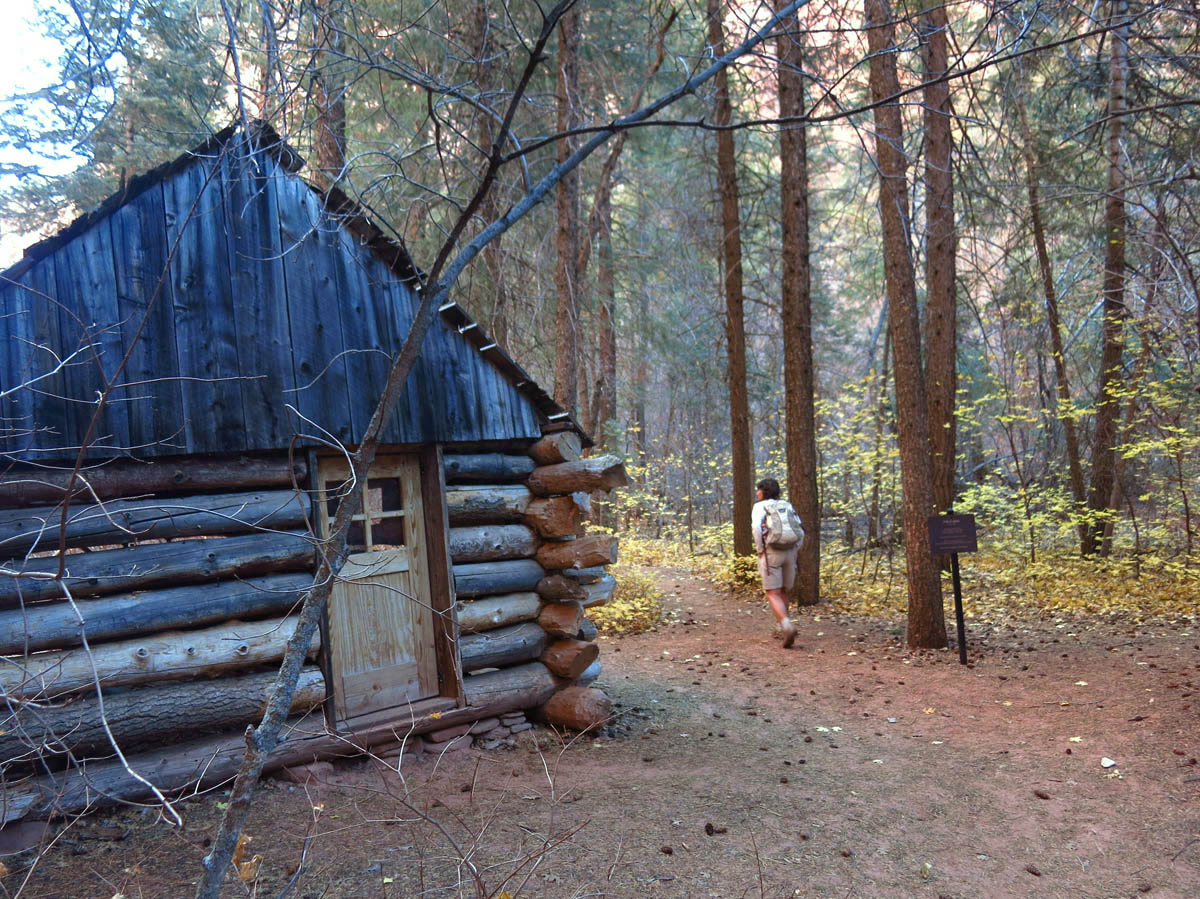 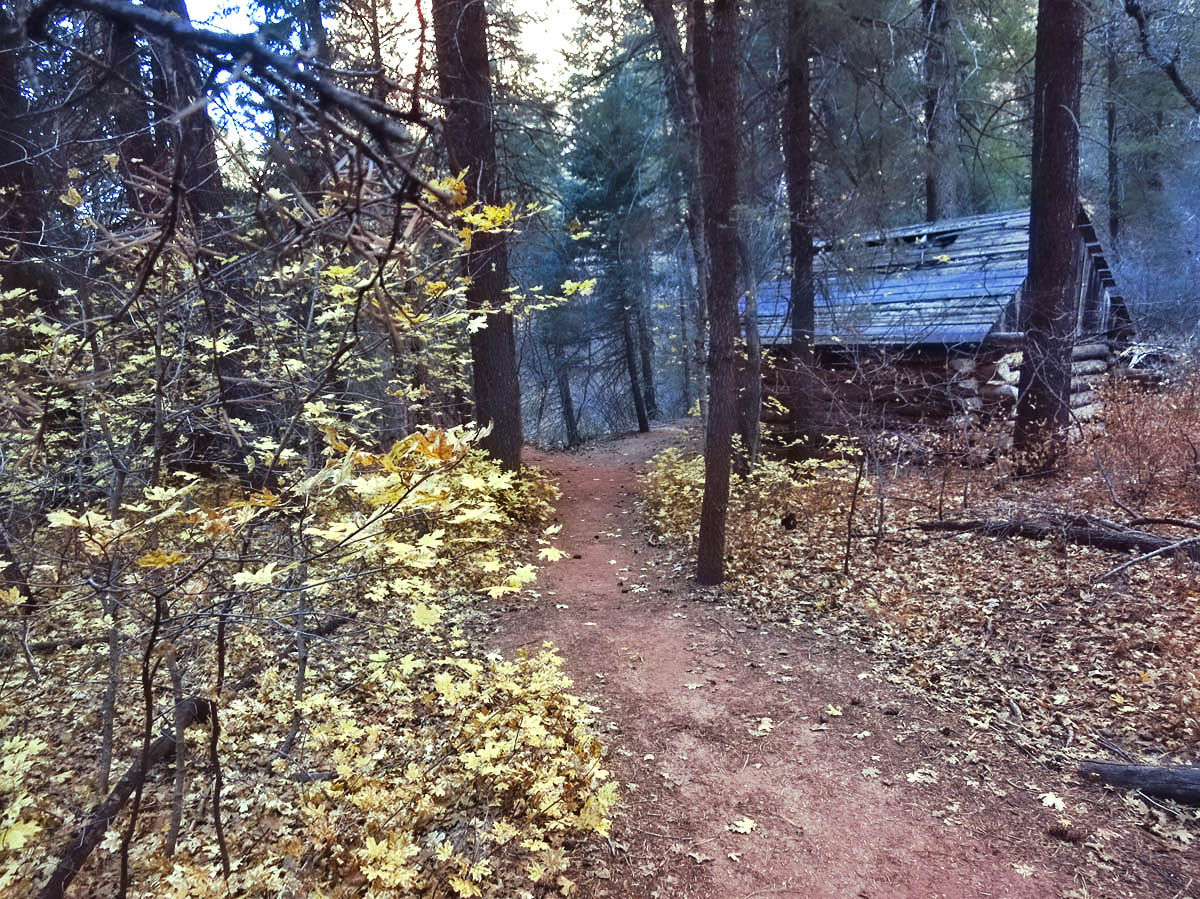 Also up for discussion is the portrayal of these colors through photography, and the use of saturation.   How much is too much?  Ideally, one would use saturation to manipulate the photo to more closely resemble what was seen with the naked eye.  Only instead of increasing, we discuss the need to decrease.  There is no need to saturate, as Nature is doing that for us.  The sun lighting up one red cliff casts an unnatural, intense orange glow on the opposing red cliff, causing the red glow to reverberate, even reflecting back onto the trail.  We could be walking on the set of “The Martian’s” red planet. 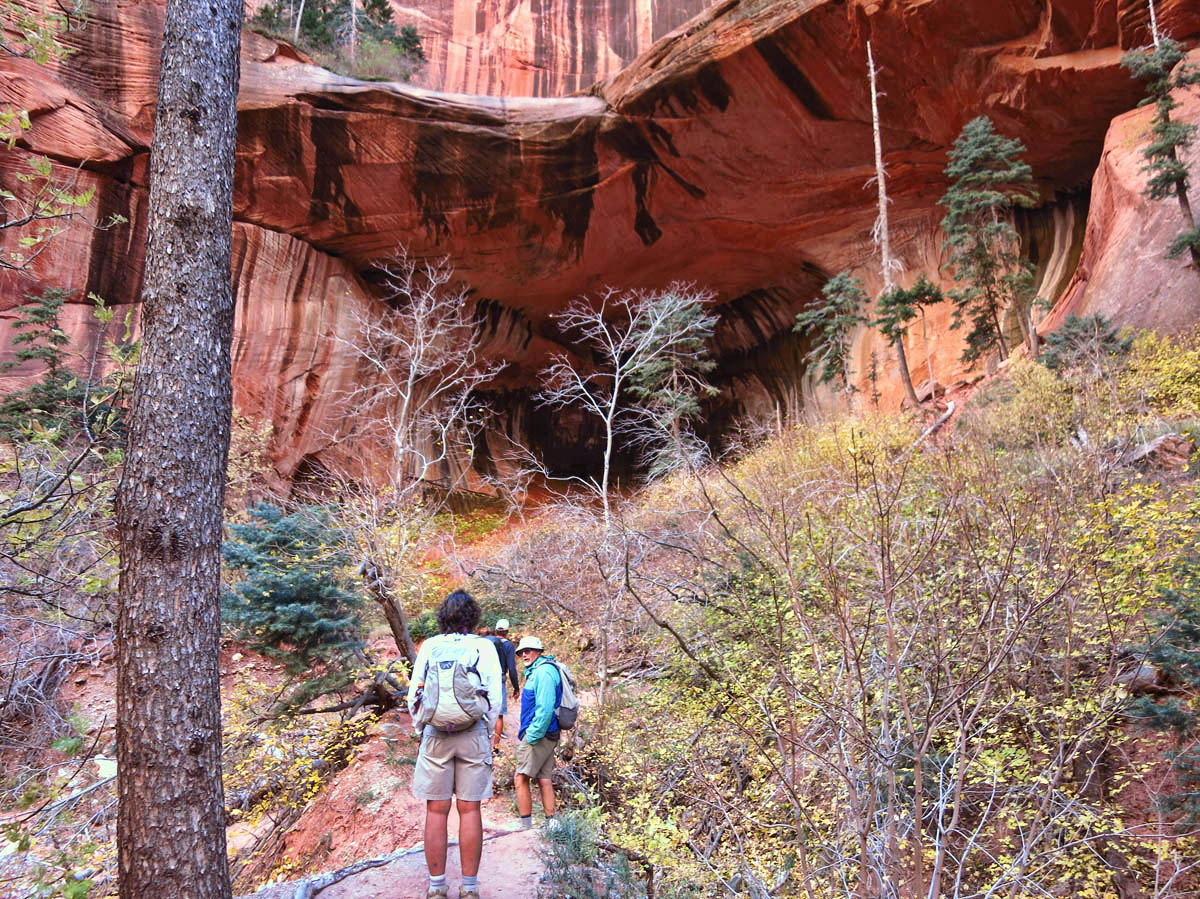 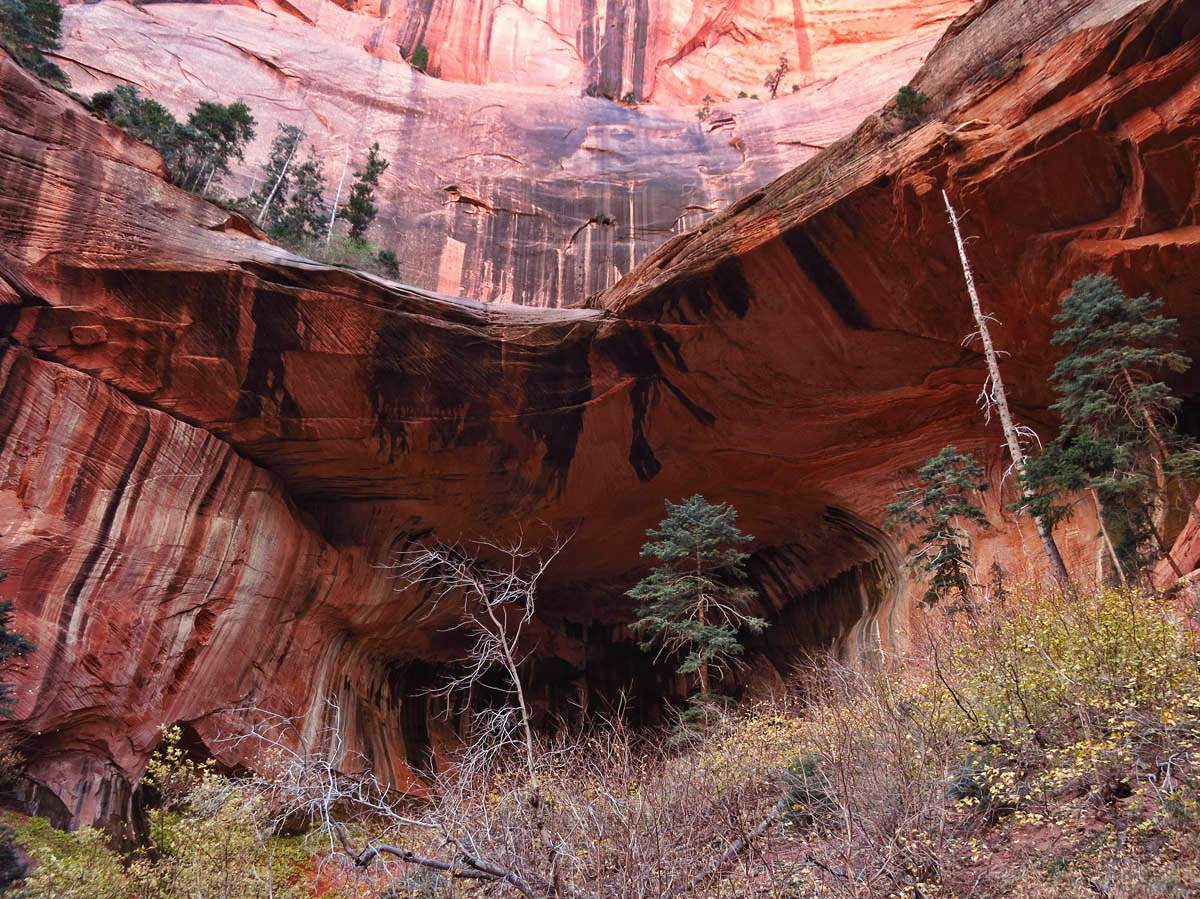 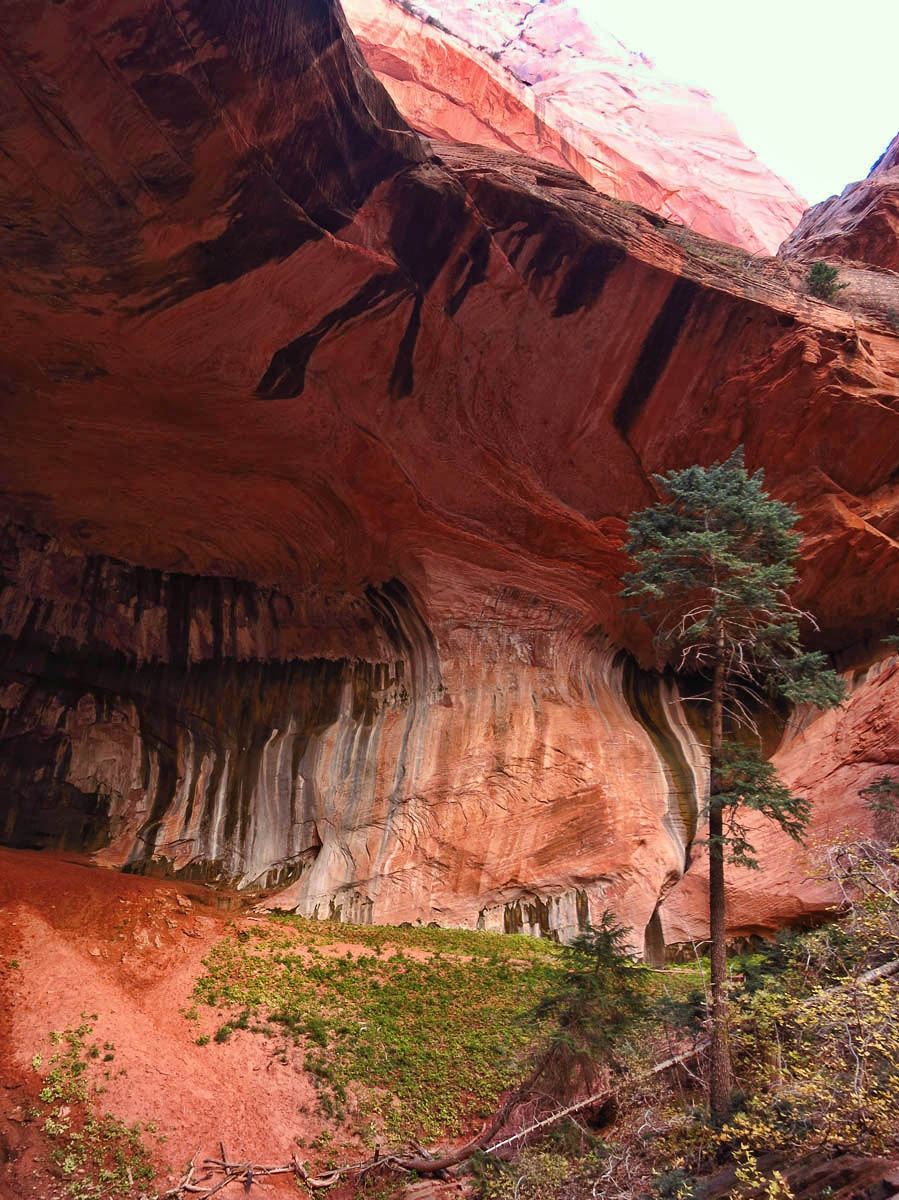 And the blue of the skies in Utah is like no place I have ever seen.  The term “sky blue” would represent a washed out, hazy day in Zion.  Instead, the color as a back drop against the snow white and rose red sandstone looks more like Indigo, somewhere in between blue and violet. 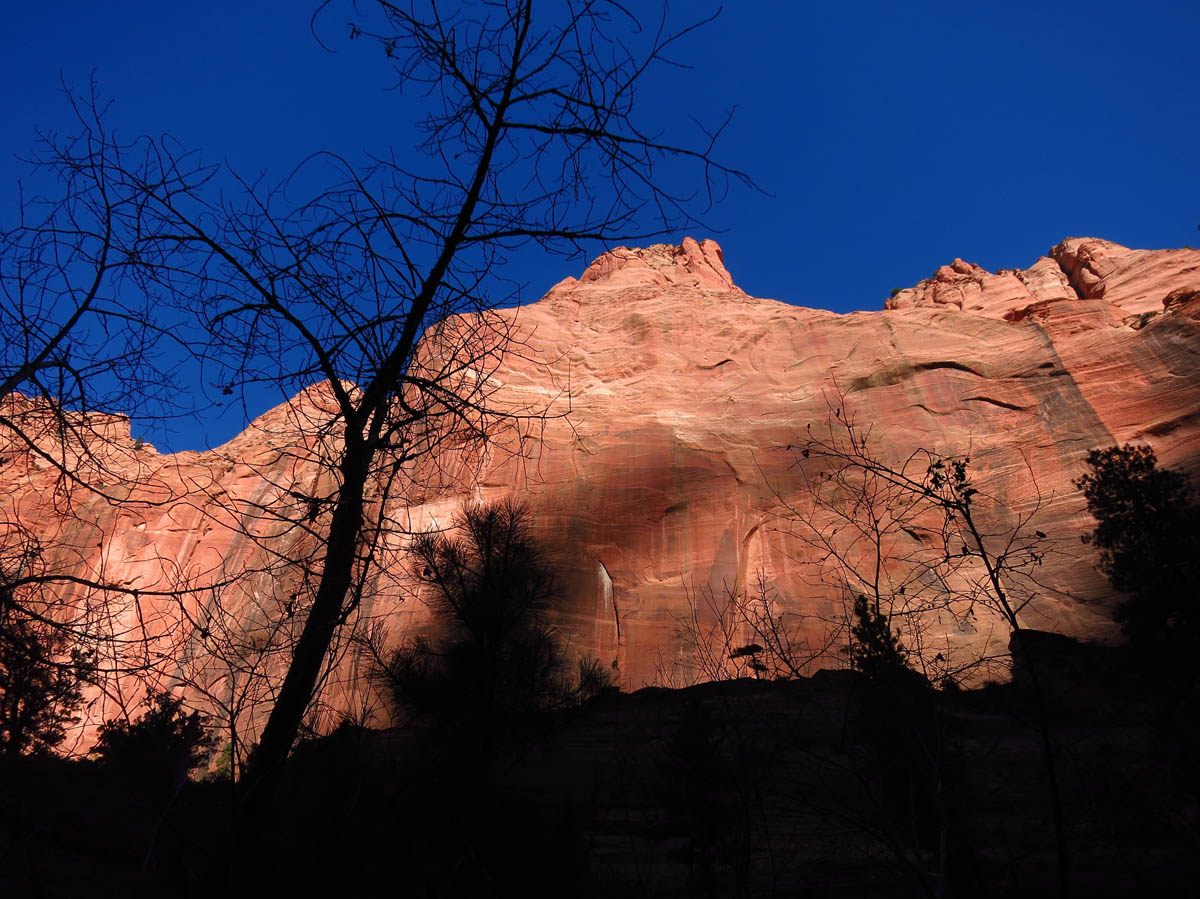 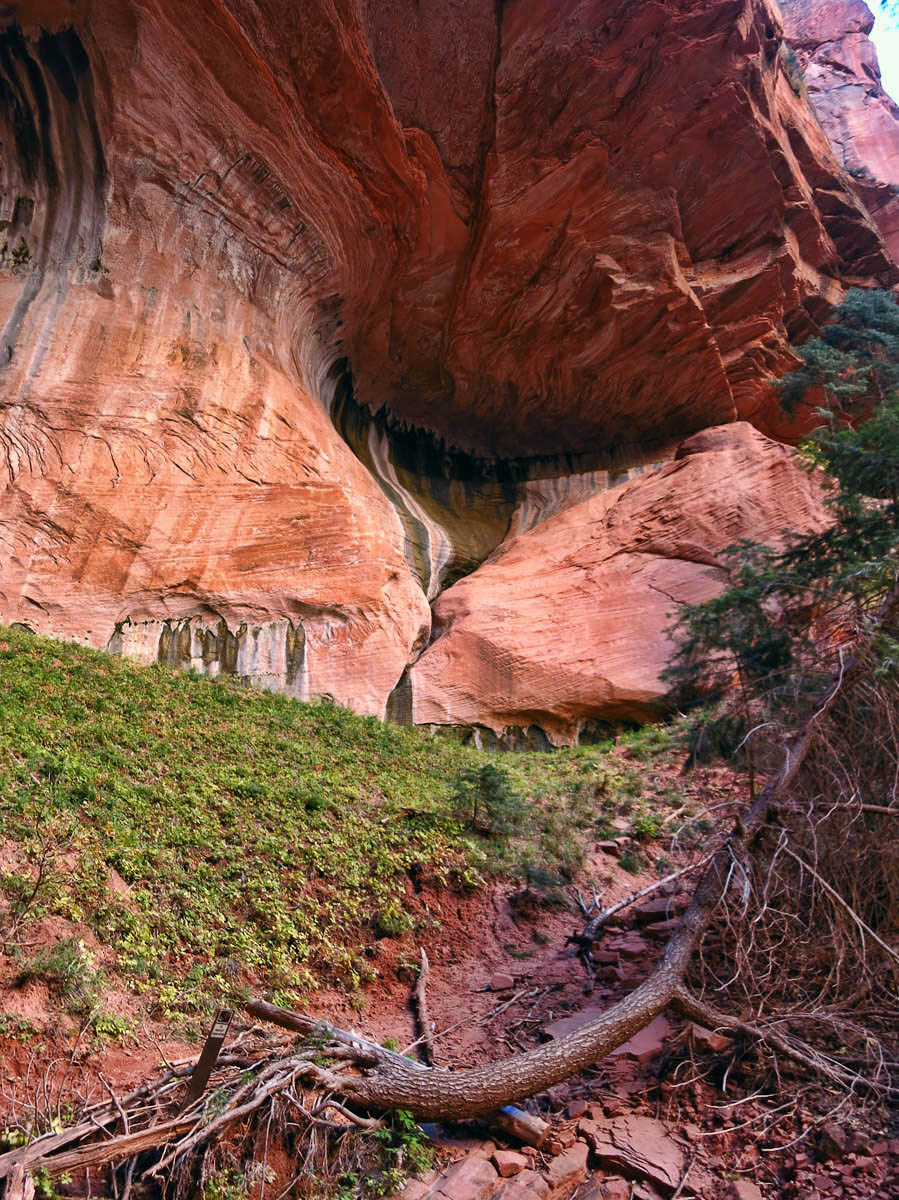 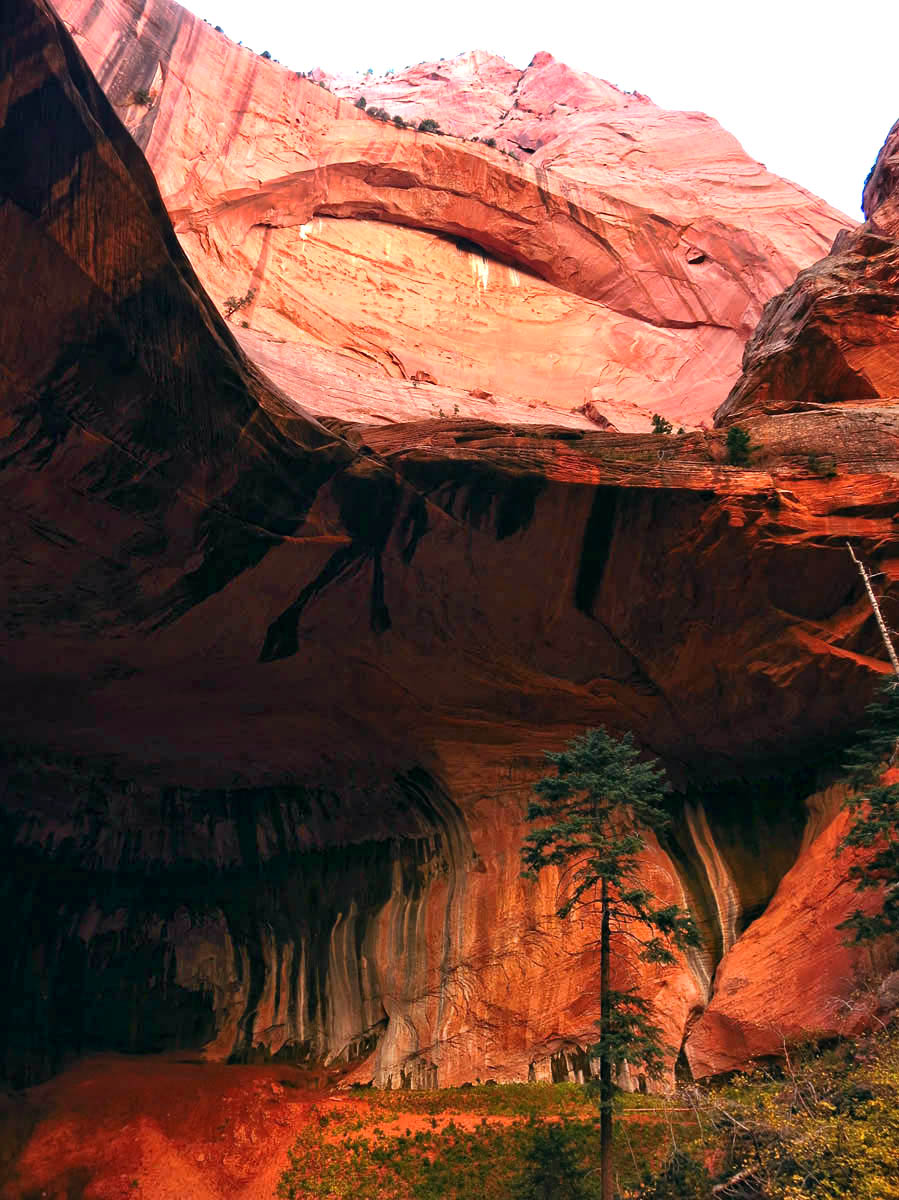 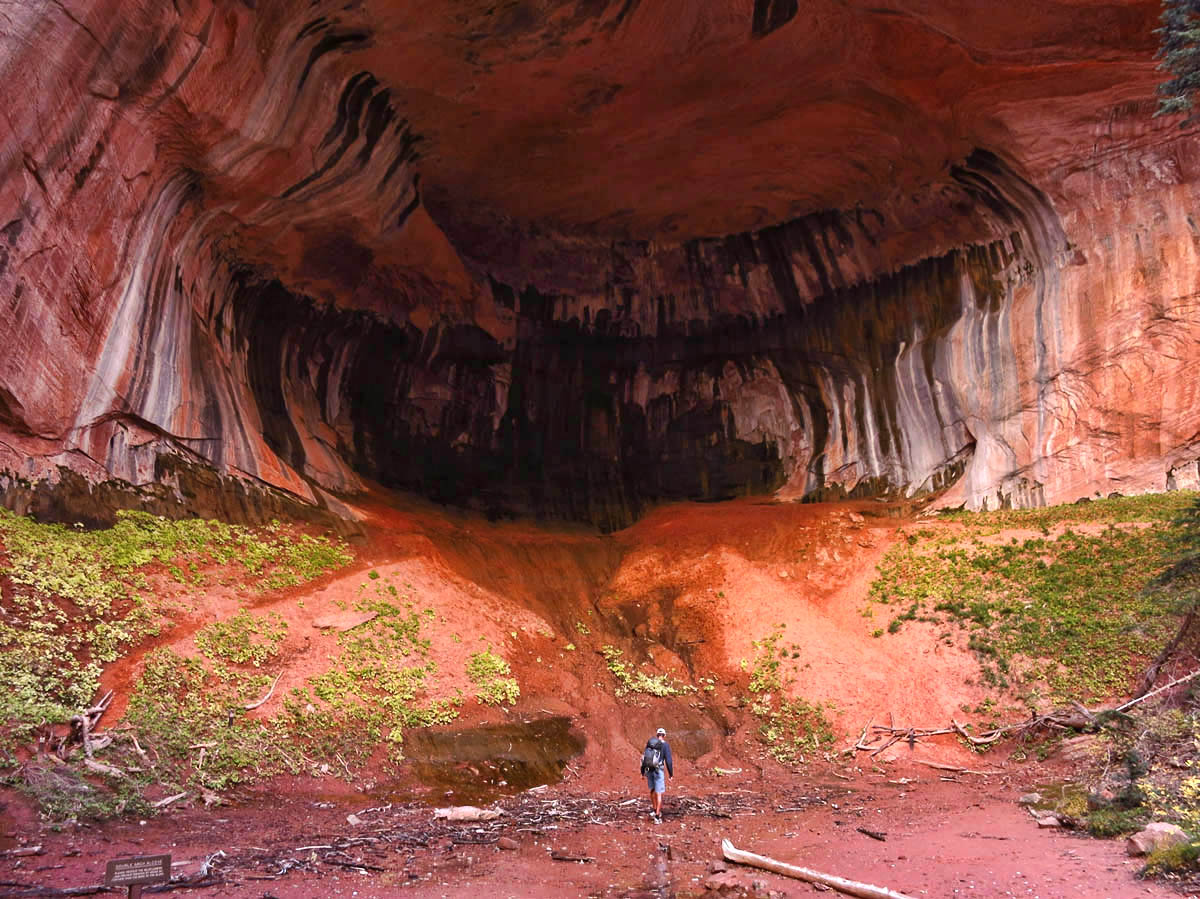 In the end, it doesn’t really matter if the photo has been embellished; if saturation has increased or decreased.  What really matters is the memory it evokes to the photographer.  The one that stood there on that cold, damp autumn day and looked through the lens, knowing the camera would never do justice to the place, but hoping instead it would evoke some memory at a later date…”to see again.”  The lighting, the cold, the damp, the wind, the distance of the trail are all just layers of paint of a different day.  What lies within is what counts.  Beneath the pentimento.

“Old paint on a canvas, as it ages, sometimes becomes transparent. When that happens it is possible, in some pictures, to see the original lines: a tree will show through a woman’s dress, a child makes way for a dog, a large boat is no longer on an open sea. That is called pentimento because the painter “repented,” changed his mind. Perhaps it would be as well to say that the old conception, replaced by a later choice, is a way of seeing and then seeing again. That is all I mean about the people in this book. The paint has aged and I wanted to see what was there for me once, what is there for me now.”
― Lillian Hellman, Pentimento 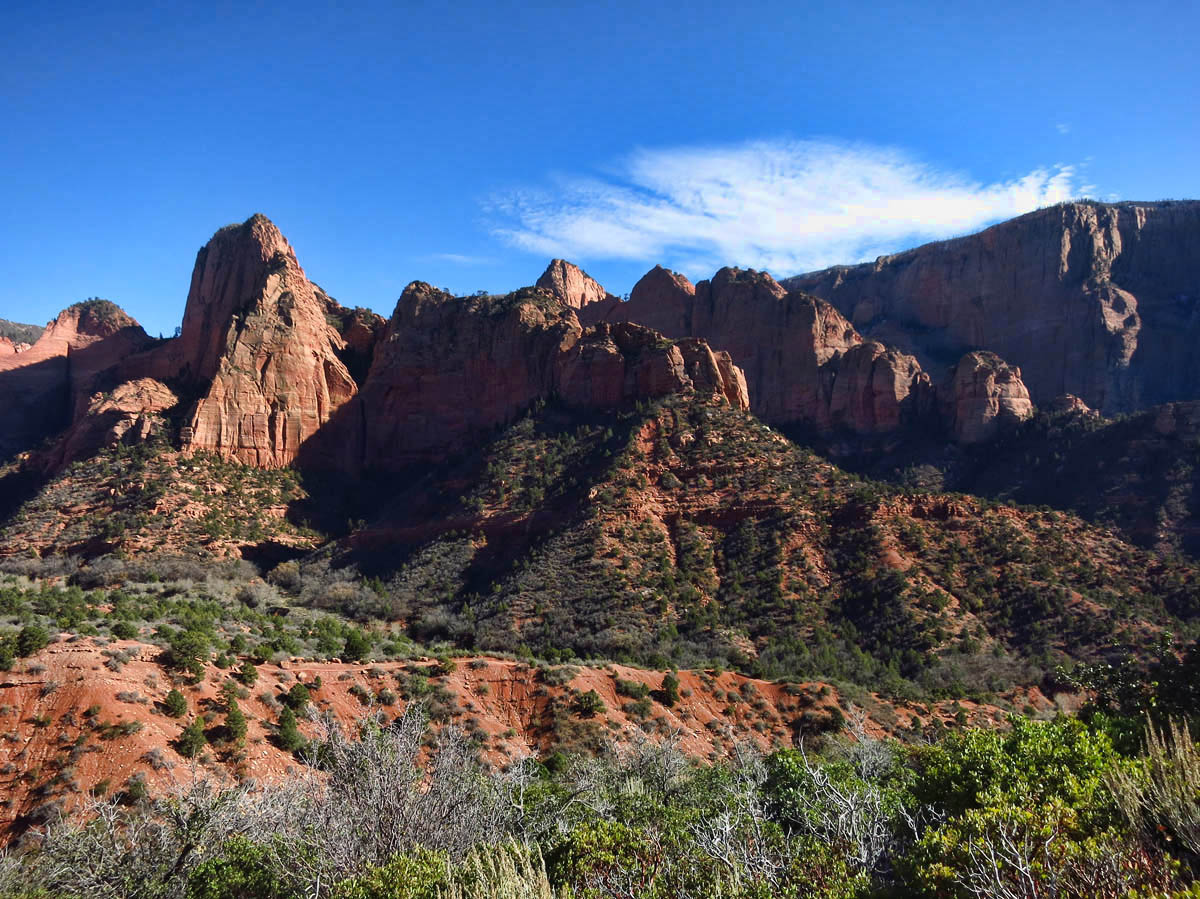