There’s nothing like losing two immediate family members and attending three family funerals within the past six months to make one ponder “impermanence.”    When I used to see places like “Tripod Rocks,” I would ponder the probability that they would still be standing this time next year.  After the loss of my brother seven years my junior followed by my Dad, now I wonder if I will be… 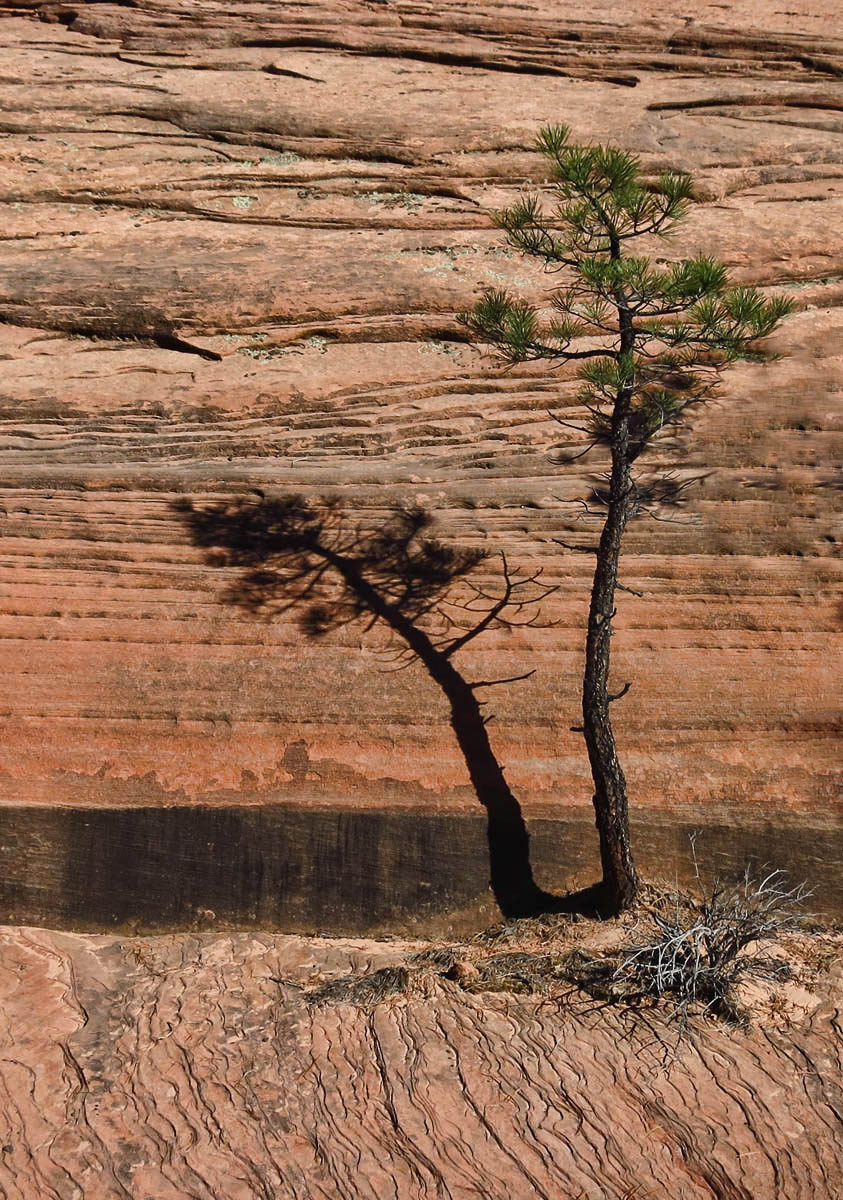 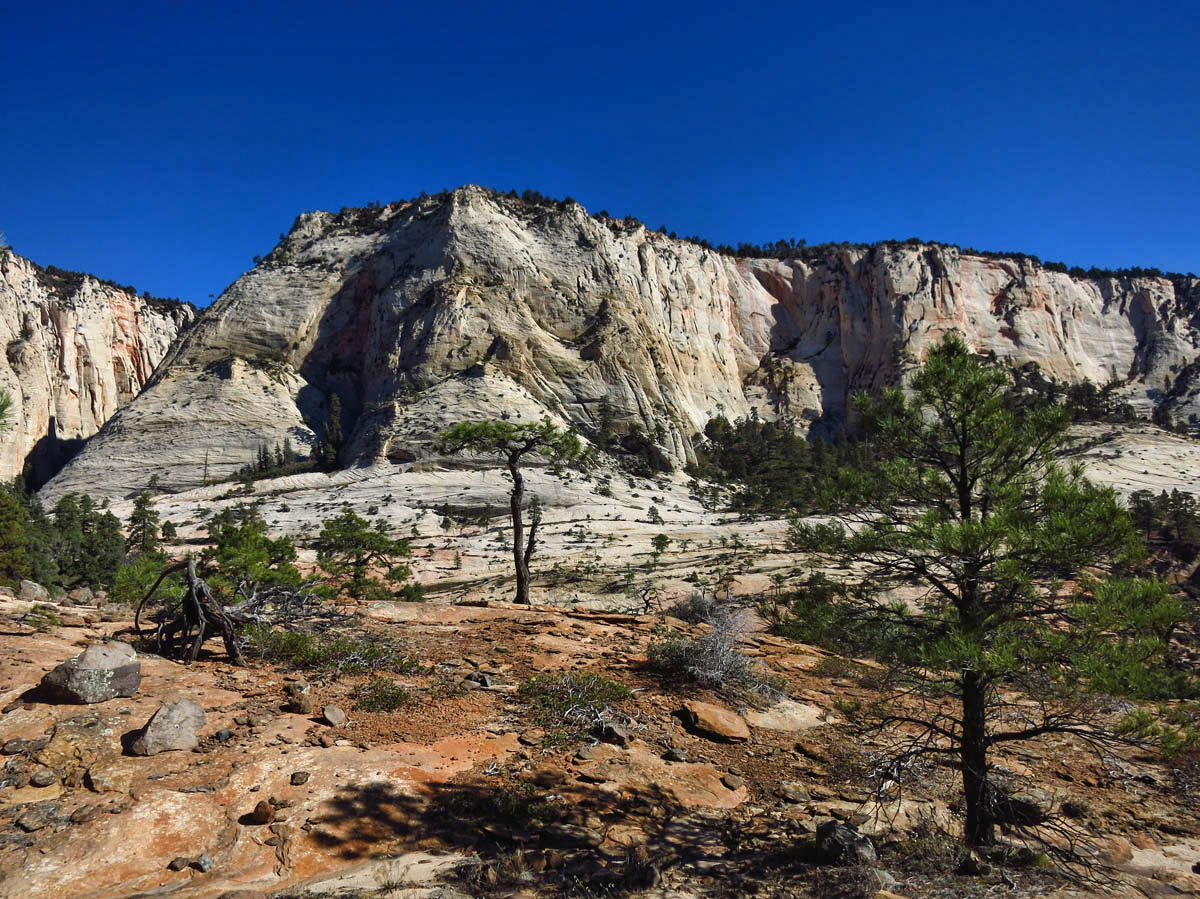 This time last year, Mark led our “gang” of hikers down to his own version of “Ed Maier’s Secret” to a place he calls “Tripod Rocks.”   What was once a group of three precariously perched rocks on “tripod” stilts is now down to two.   What would we find this year?  Would they both still be standing? 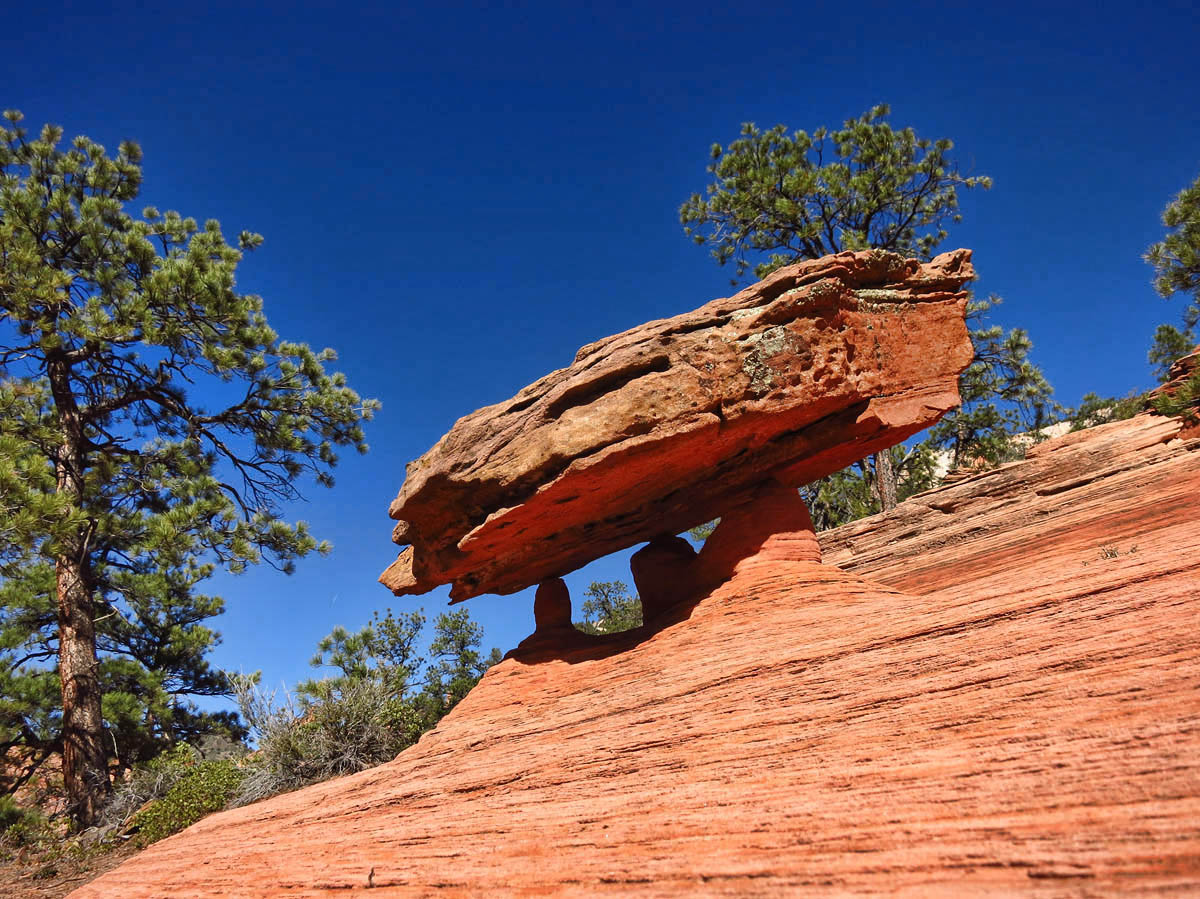 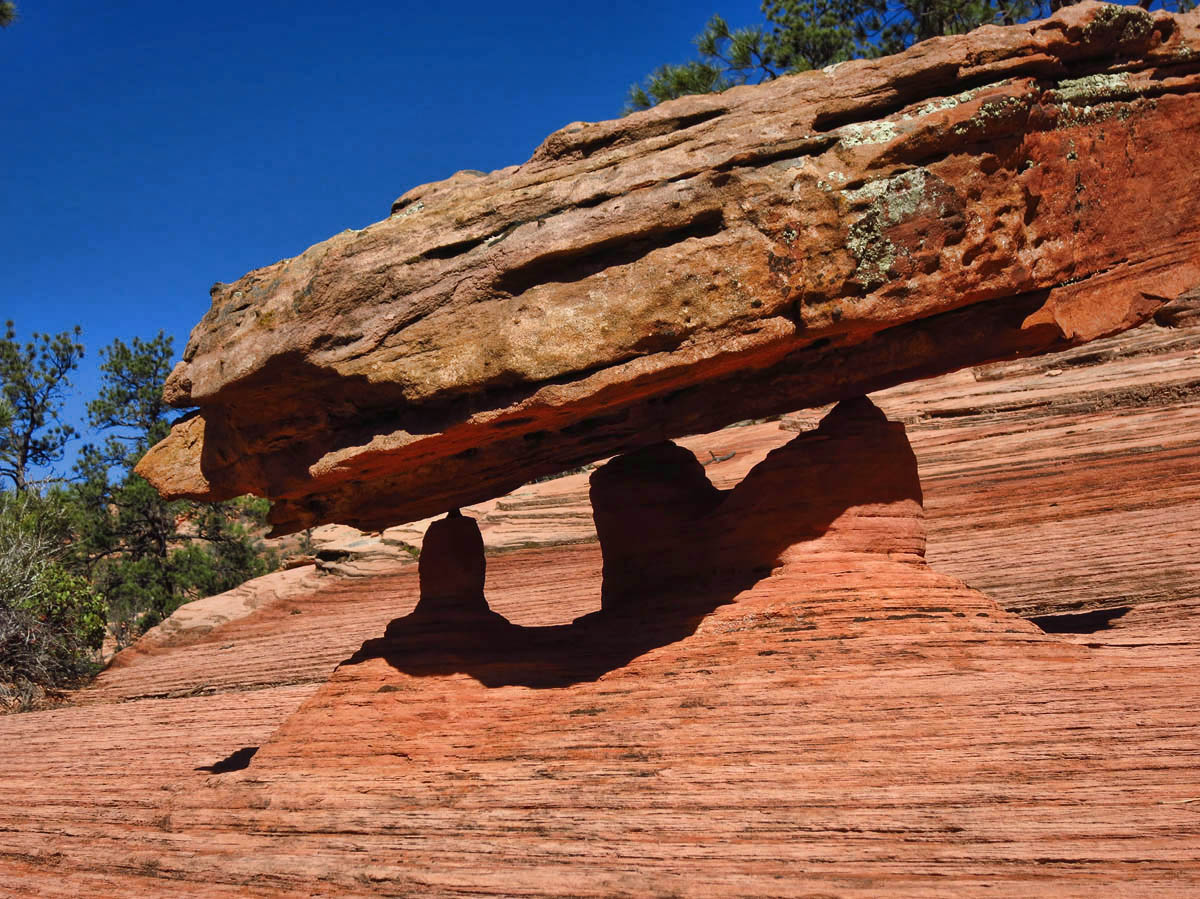 Check out the close-up of the pillar on far left. The tip is about the size of my index finger!

This rather strenuous hike is made more so by the fact that it starts out with a rather steep, continuous downhill.  After a 1.5 mile walk through a pine and juniper forest, the trail never waivers in it’s descent.   I much prefer to start a hike on the uphill to get the climb over with first rather than the haunting reminder that with every step down, one must also come back up later when energy levels are lower.   But thankfully, unlike last year, it’s a cool day, which helps.  A little nip of winter is in the air, as we encounter patches of snow along the trail.

Once we start our descent, these patches of white begin to look like powdery slopes, only instead of snow, it’s snow-white sandstone.  As crazy as I am about the pinks, corals, and sienna hues of the red rocks of Utah,  the anomaly of pure white sandstone drifts is one of my favorite parts of this trail. 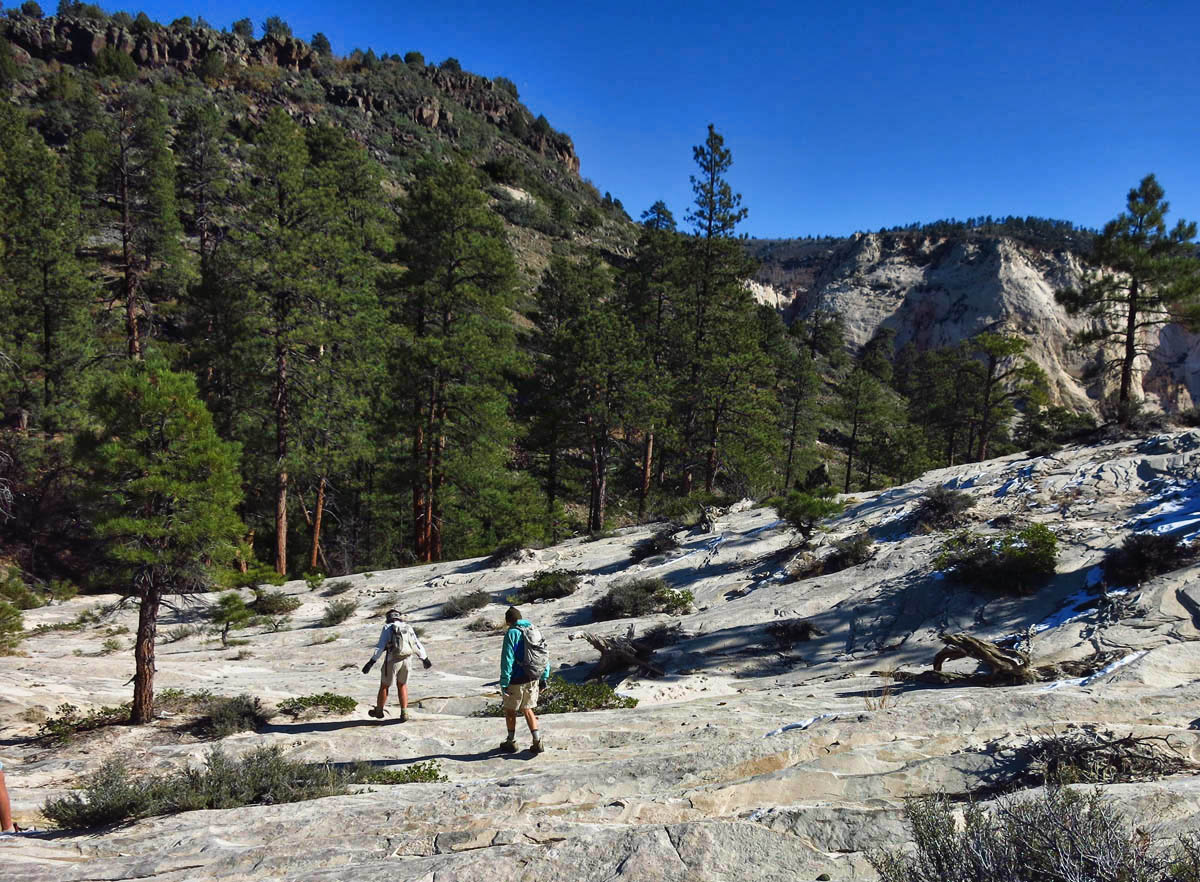 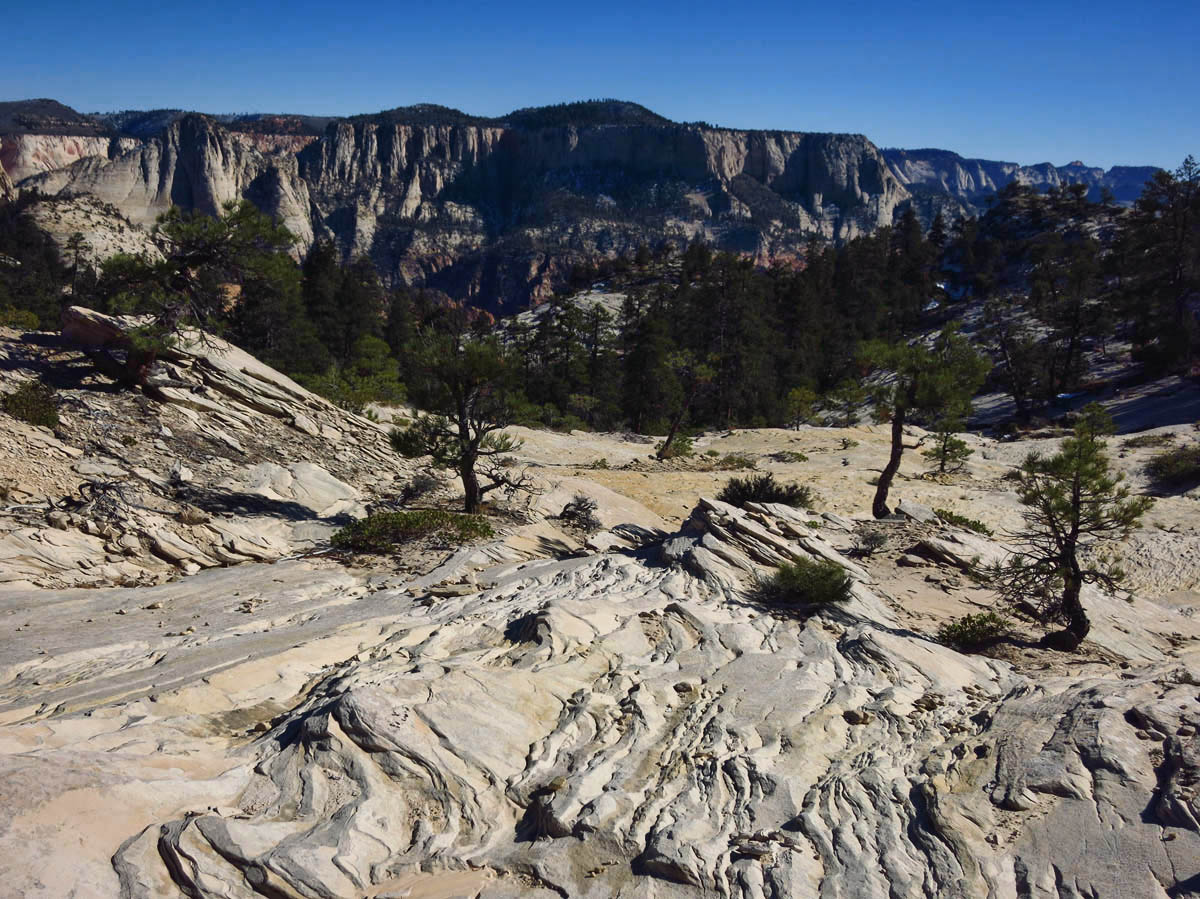 But as we drop further and further in elevation, the colors begin to swirl, blending with the white sandstone.  I can’t begin to describe this as eloquently as Mark, so I will just quote him, “like swirls of vanilla bean and strawberry soft serve.”  The color intensifies the further down we go, until we are in a warm red sea of sandstone, riding the waves and ripples on downward. 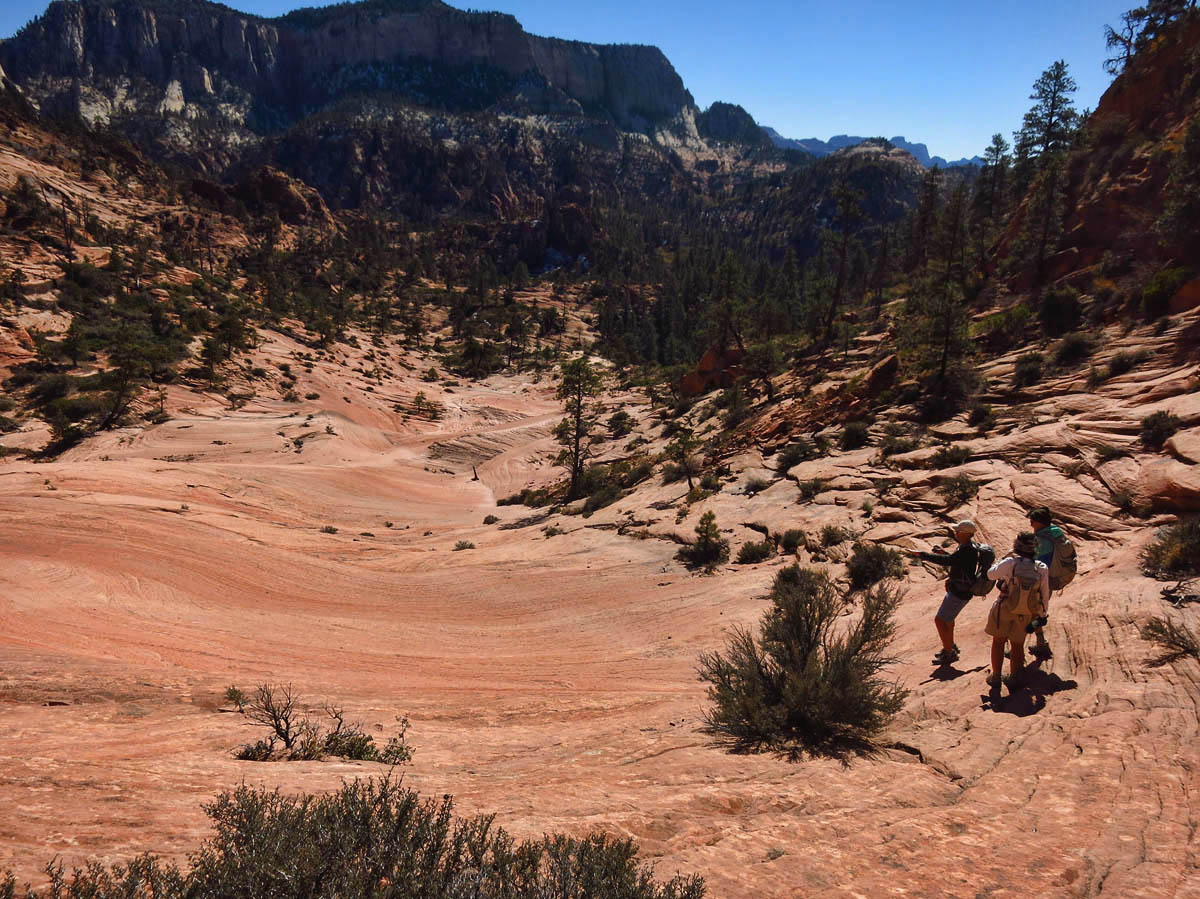 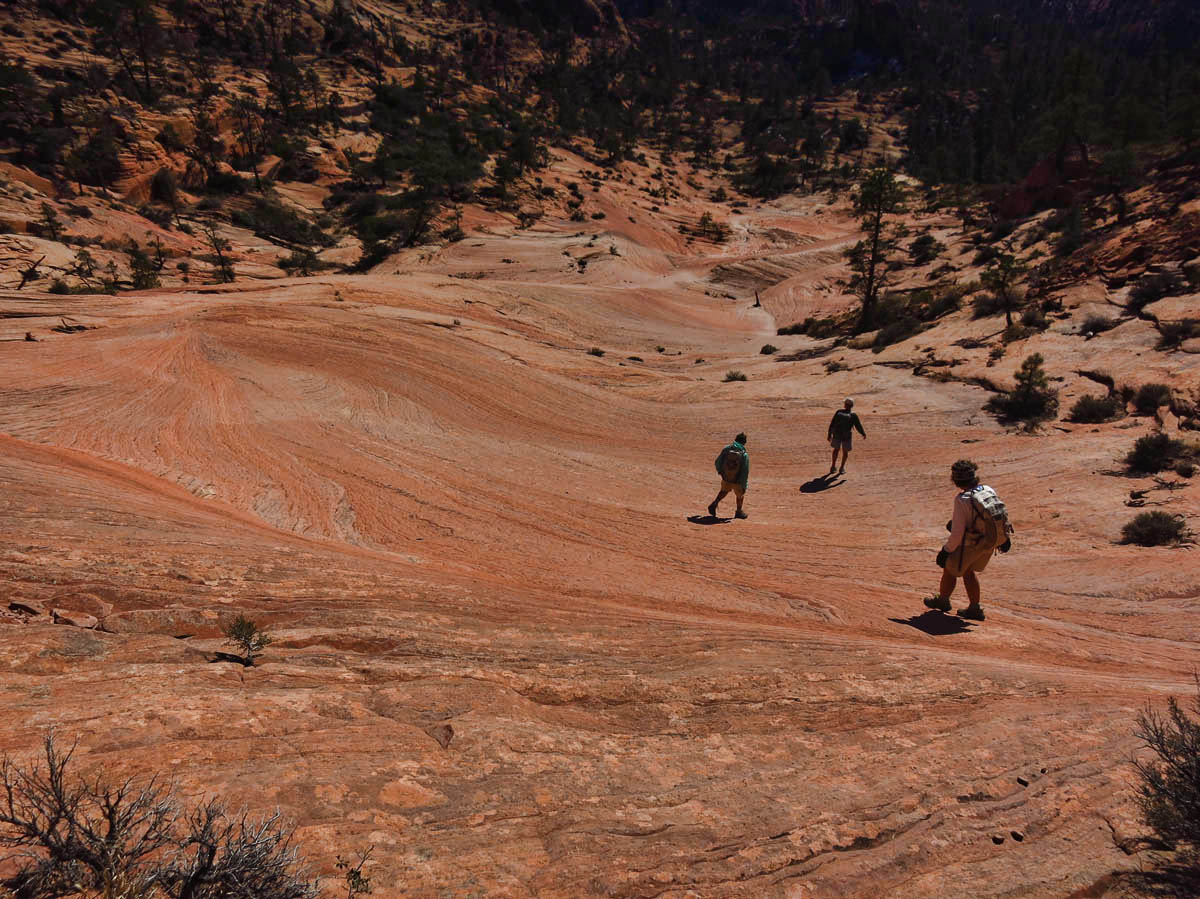 Finally, the rocks come into view, and I breathe a little sigh of relief.  I am pretty sure I heard an audible sigh from Mark as well as he exclaims, “They’re both still standing!”

We look for a place sit behind a bluff to block the wind, out of sight from the main trail so as not to be spotted.    Although we haven’t seen another soul on the trail, there is no need to risk calling unwanted attention to the tenuous tripods.    Lunch is quick, as we have not been successful in finding a spot with a view while sheltering out the biting wind. 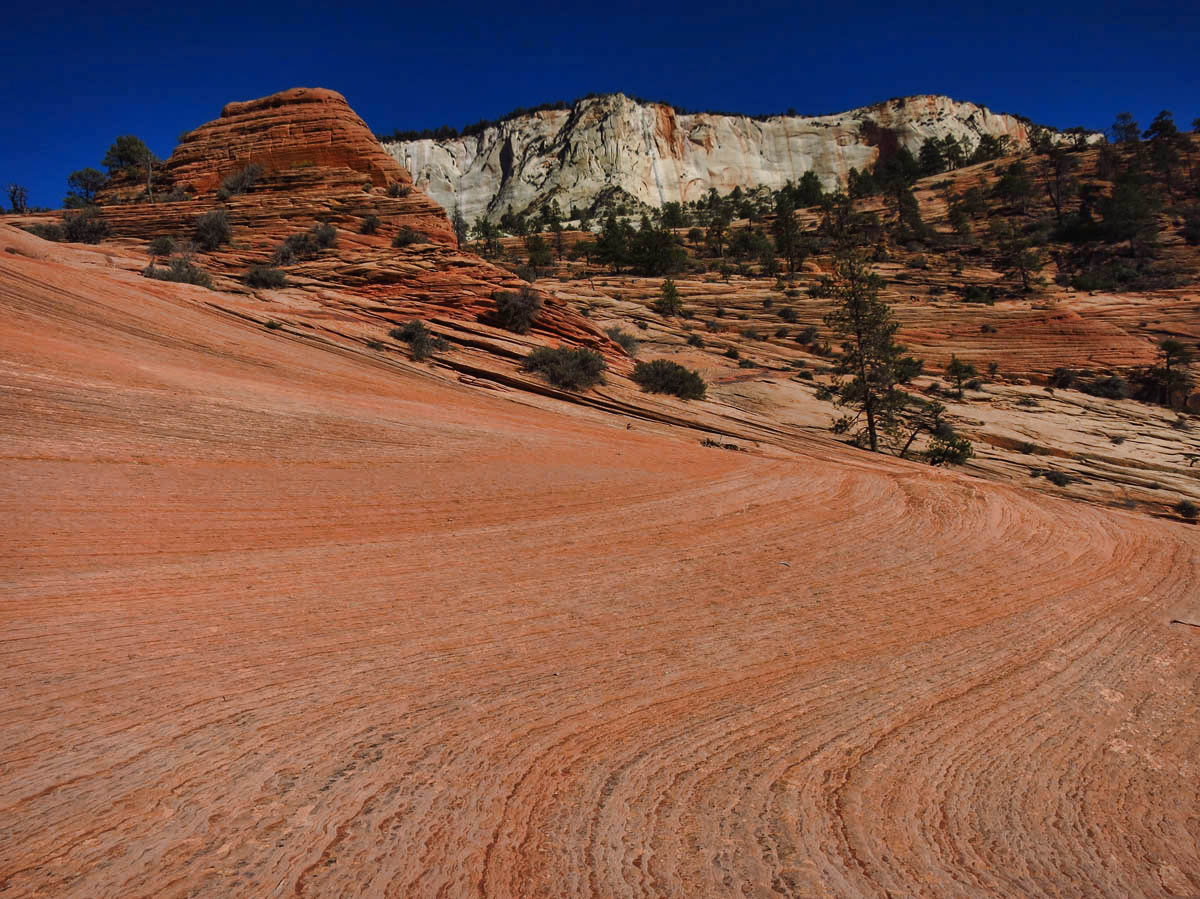 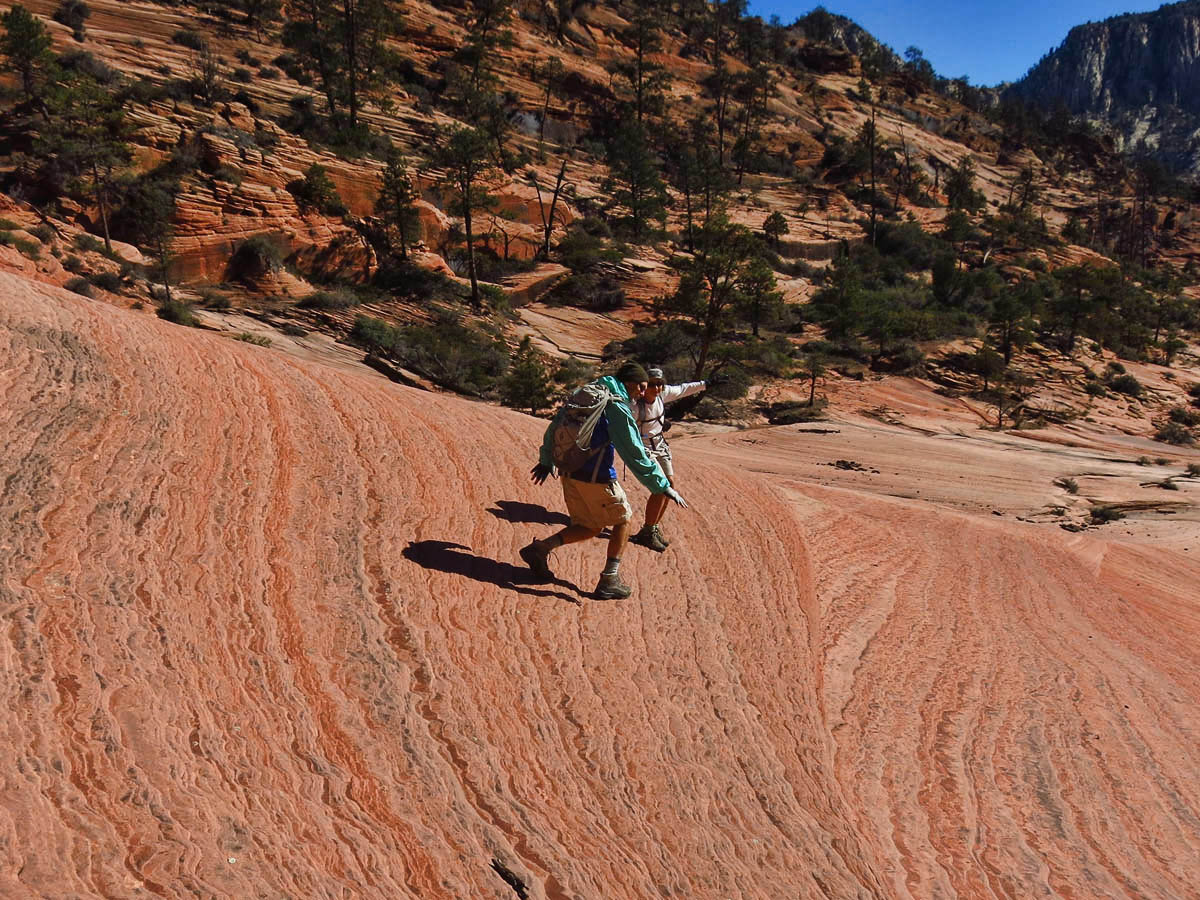 Chris and Bobbie “surfing” the waves of the Red Sea of sandstone.

Soon, we hear four young Asian hikers descending the trail.   Anticipating that they will follow the cairns down the middle of the canyon, we keep quiet in hopes that they do not see us seated above next to the tripods.   But no, they are coming straight for us!   Forward march, with overstuffed dry bags sagging, elongated wooden sticks clacking, and helmets banging by their sides.   They are on their way to hike one of Zion’s most technical canyoneering climbs, but they have lost the trail!  It’s well after noon, yet they still have to reach the mouth of the canyon, rappel down, and do at least another four miles of rugged bouldering, stream crossings, and complex route finding.  Bobbie says “Follow the cairns!”  They look at her as if they have no idea what a cairn is.   She points and says “The pile of rocks??”   If they can’t find the cairns, I figure the tripods next to us are safe.   Thankfully they don’t seem to even notice that we are sitting next to a couple of geological phenomena, and wander back toward the center of the canyon, adrenaline pumping and sticks swinging. 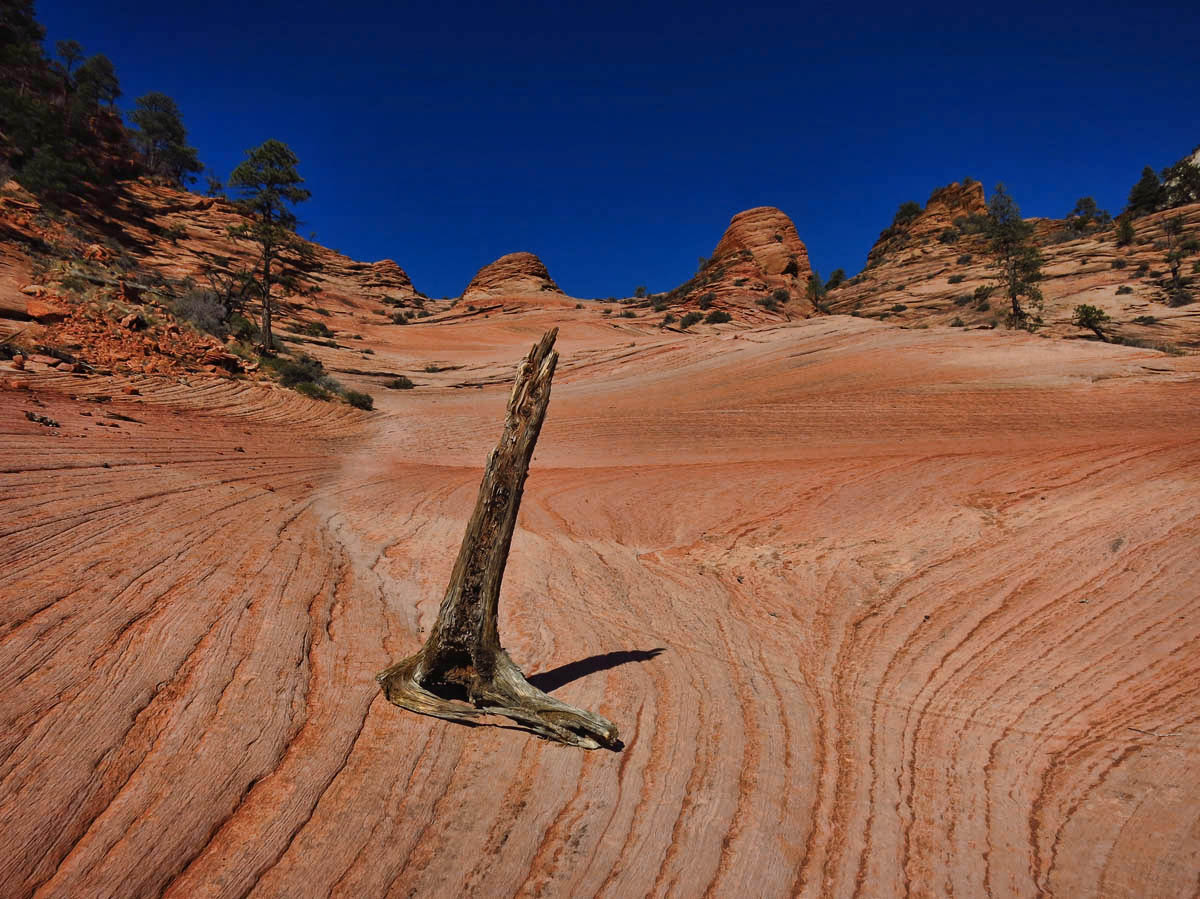 Nature’s own version of a sundial. 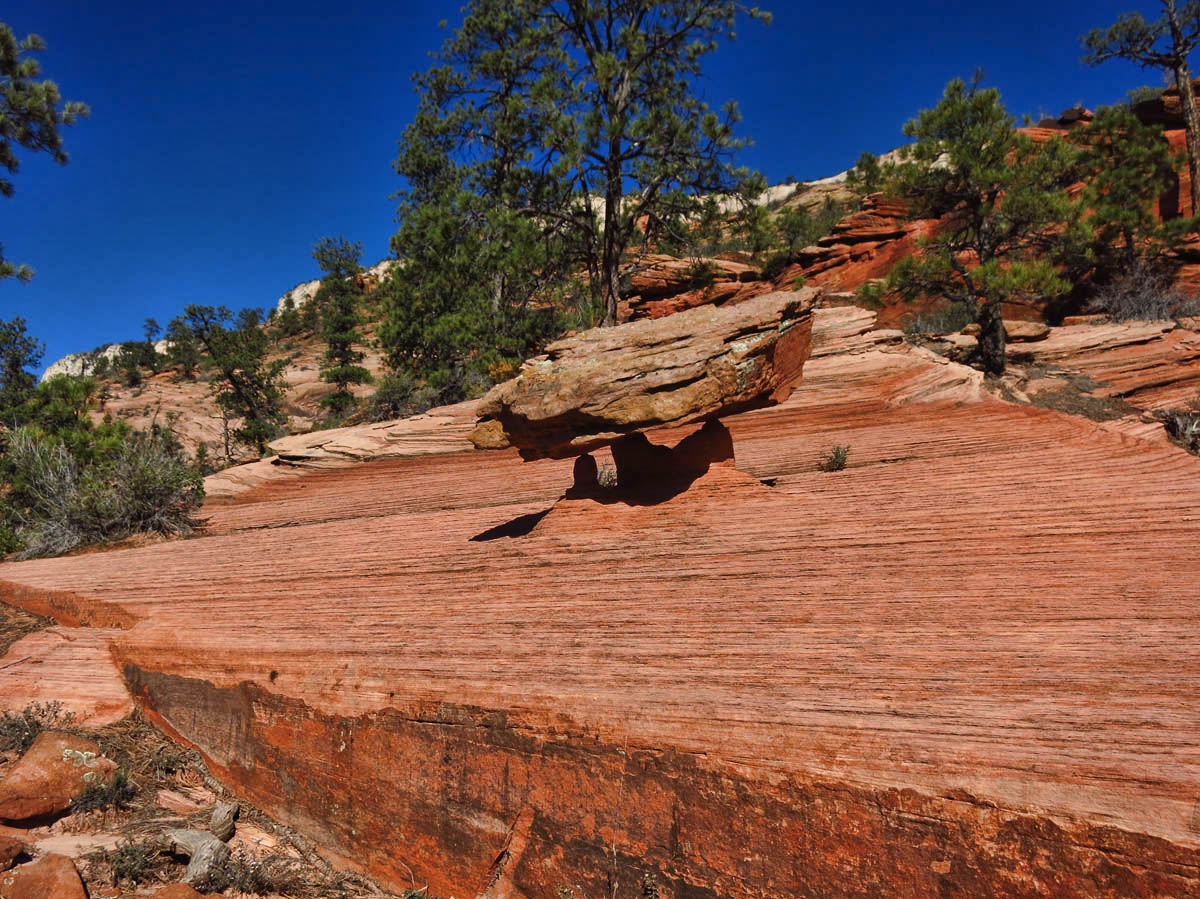 Now fortified by lunch, it’s time to start our climb up and out of the canyon.  There is talk, half jokingly, that we should move the cairns further across the slope to divert wayward hikers from dislocation, and protect the tripods from further discovery.    Preventative measures taken to prolong their existence and prevent them from over exposure. 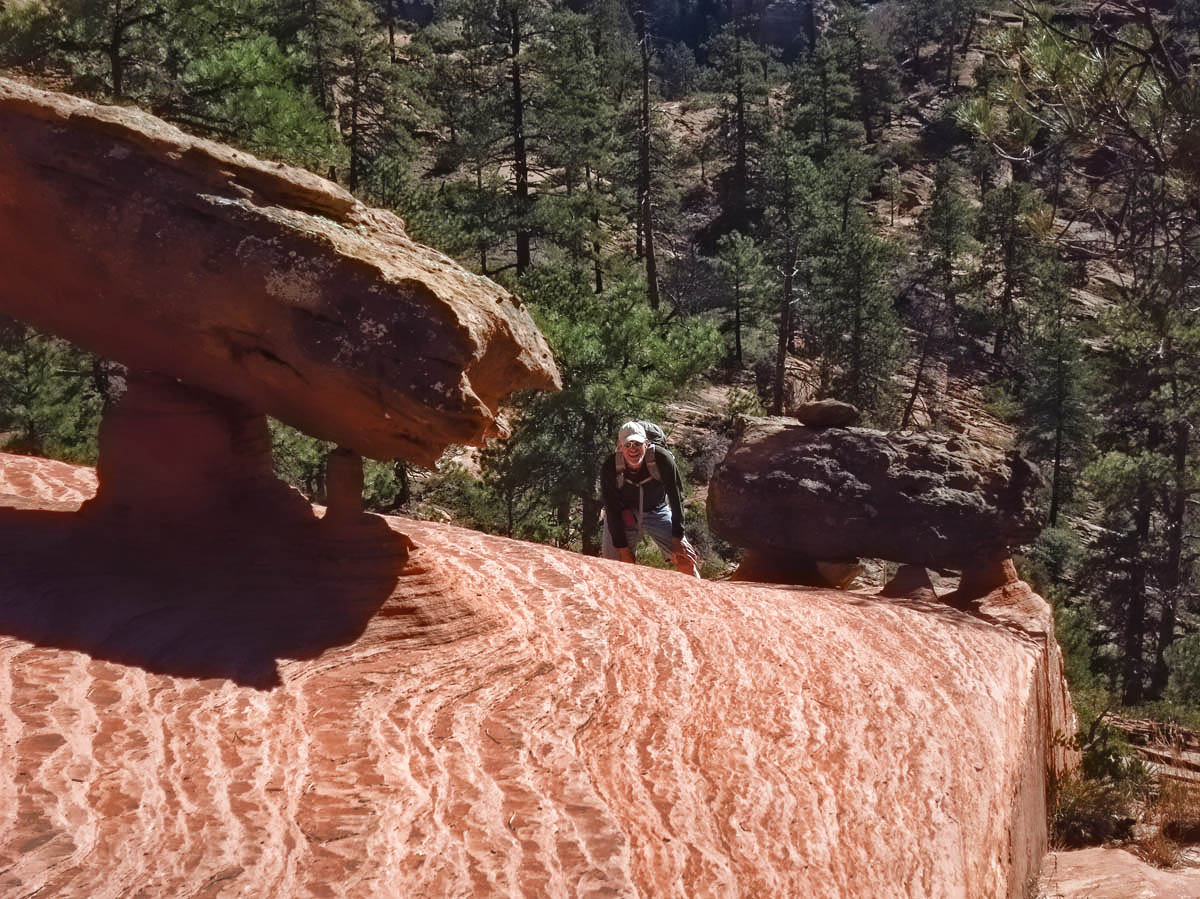 The photographer checks his angles. 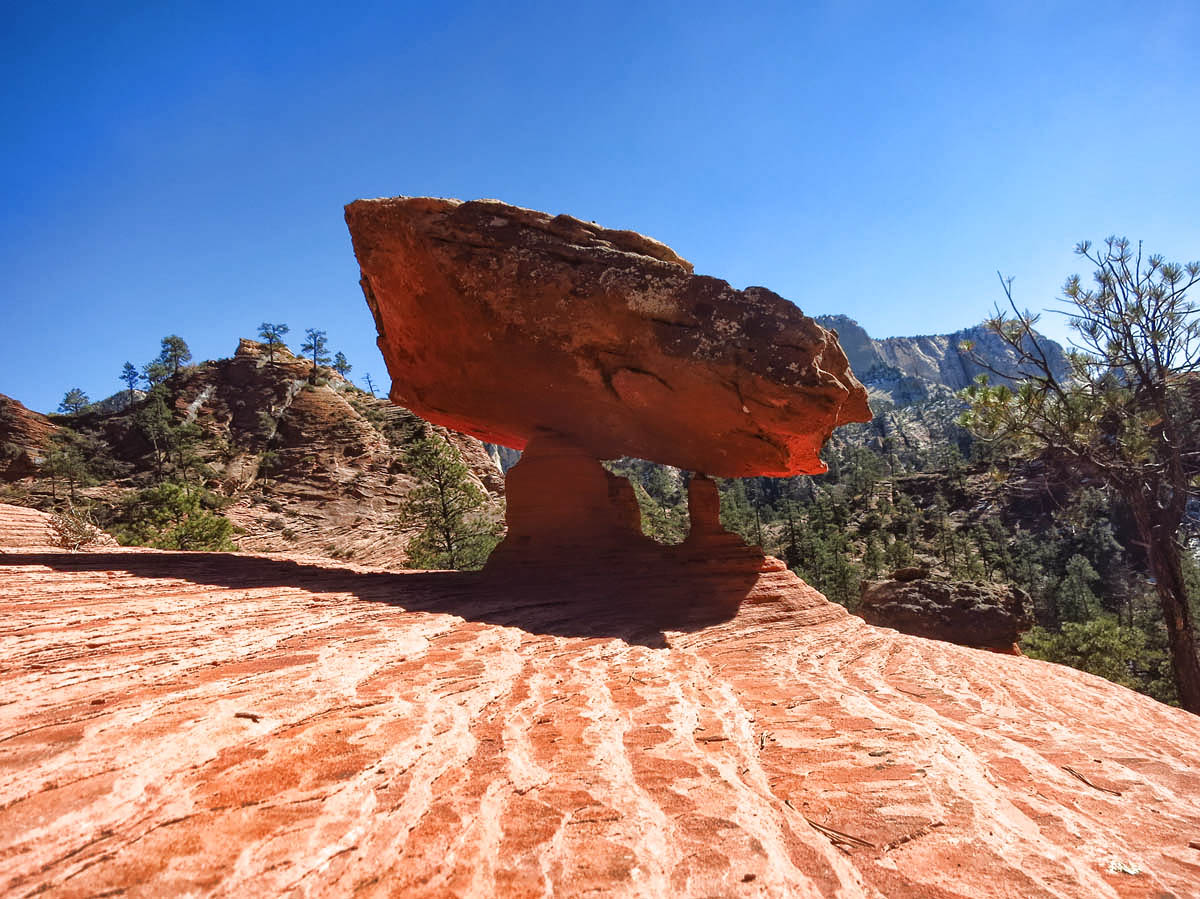 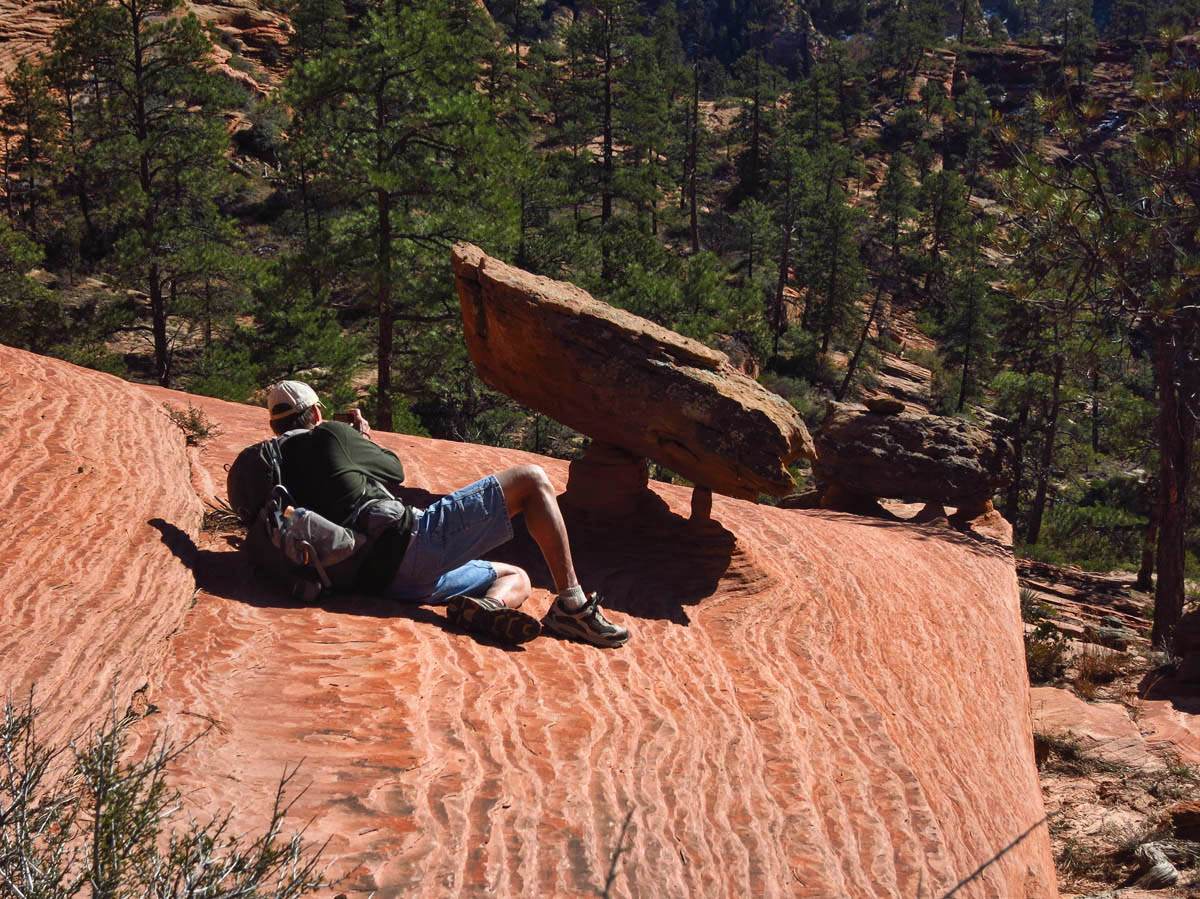 I take one long last look at the two massive rocks, each perched on a tiny tenacious tip the size of a dime, the burdensome weight overshadowing their spindly support system.  I  wonder how long they will remain.    I can’t help ponder the symbolism to my own life.  Where first there were three, now two remain, one of which is showing signs of wear.  Who knows how long before I see them again.  Will they still be here for my next visit?  How much longer can they hold up to the pressure?  Which will be the last one standing?

“Live in each season as it passes; breathe the air, drink the drink, taste the fruit, and resign yourself to the influence of the earth.”  ~ Henry David Thoreau 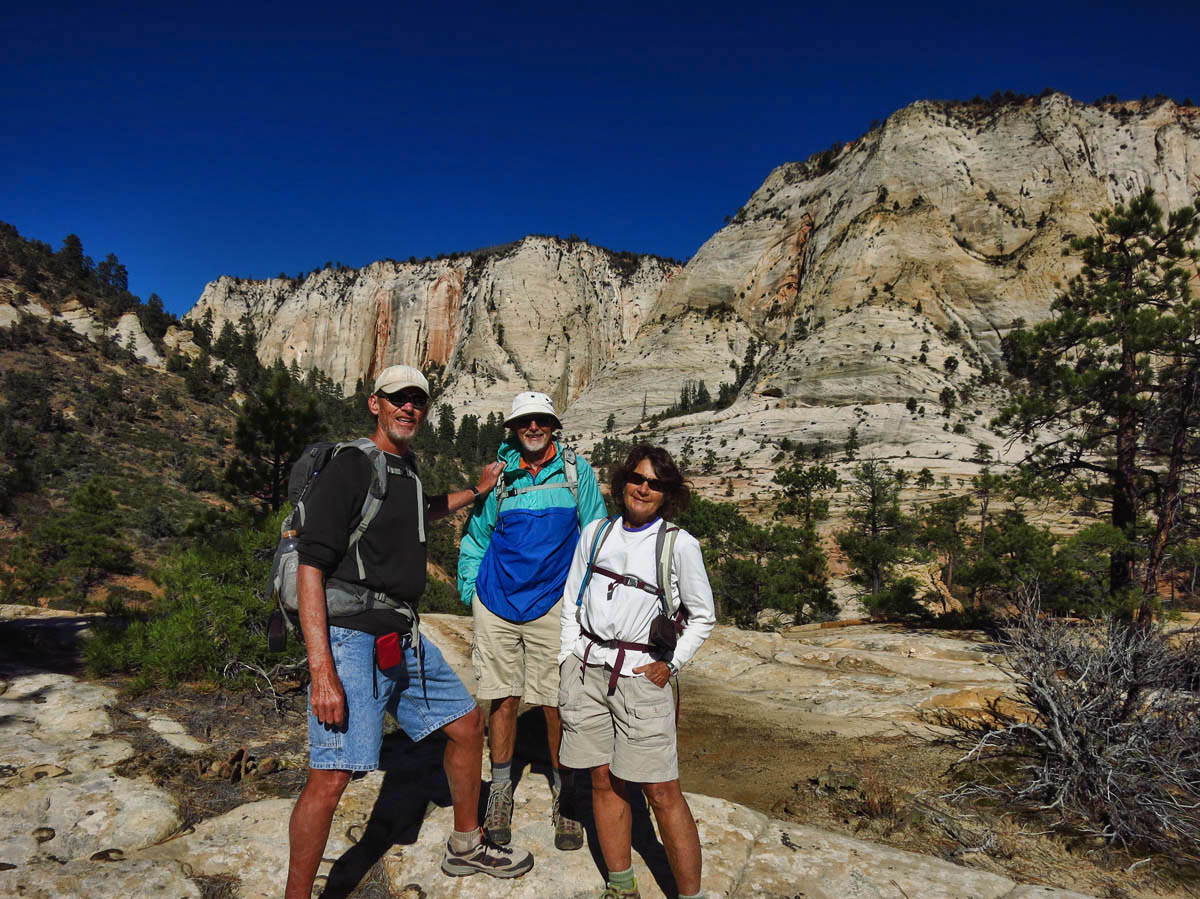