Going from the pristine, Technicolor fairyland of “holy Mount Zion” to the stark, monochromatic hills of Lake Havasu City was a bit of a shock.  Just rolling into town, seeing the “Elevation, 450 ft” made me swallow hard.  So arriving at the boondock location along a rough, dusty white-rock road left me in a bit of scenic withdrawal. 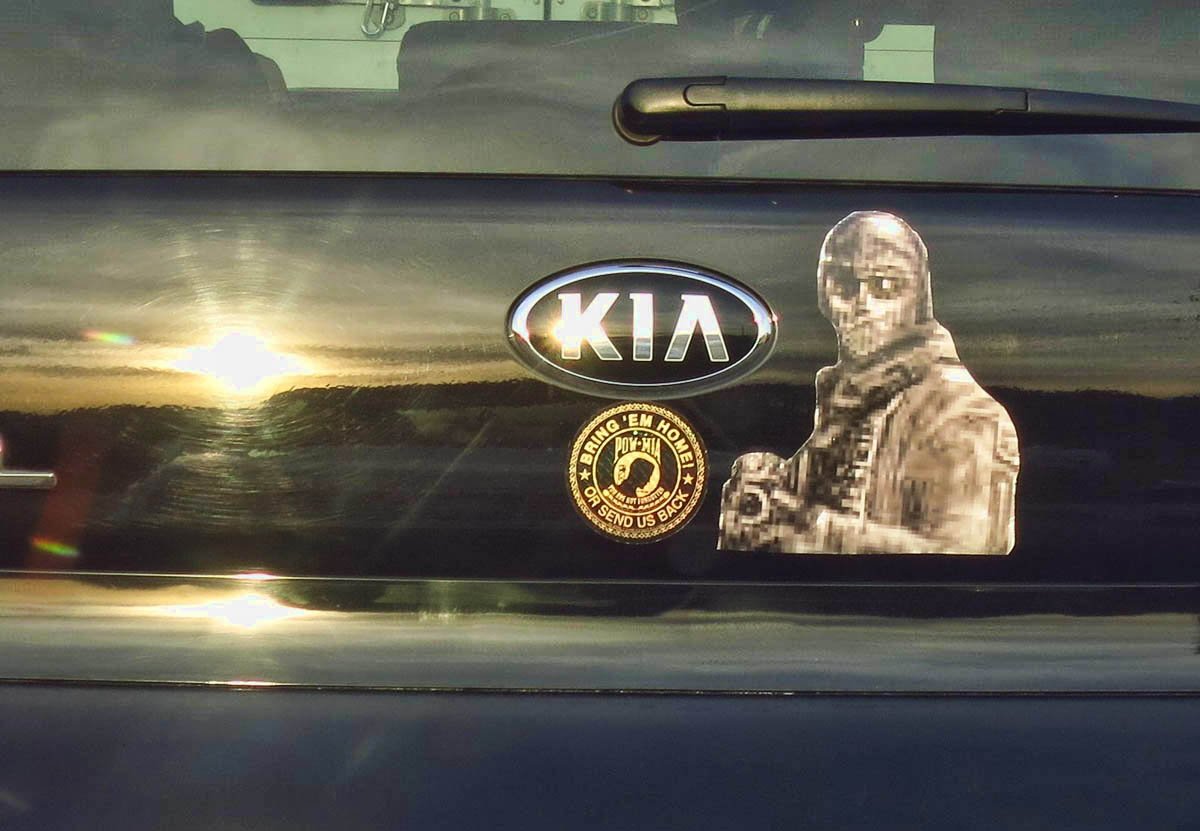 Nothing stops tailgating like looking down the barrel of a gun. 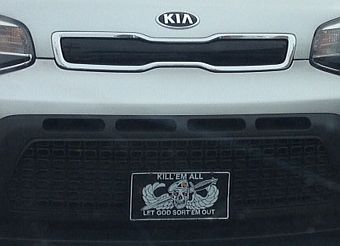 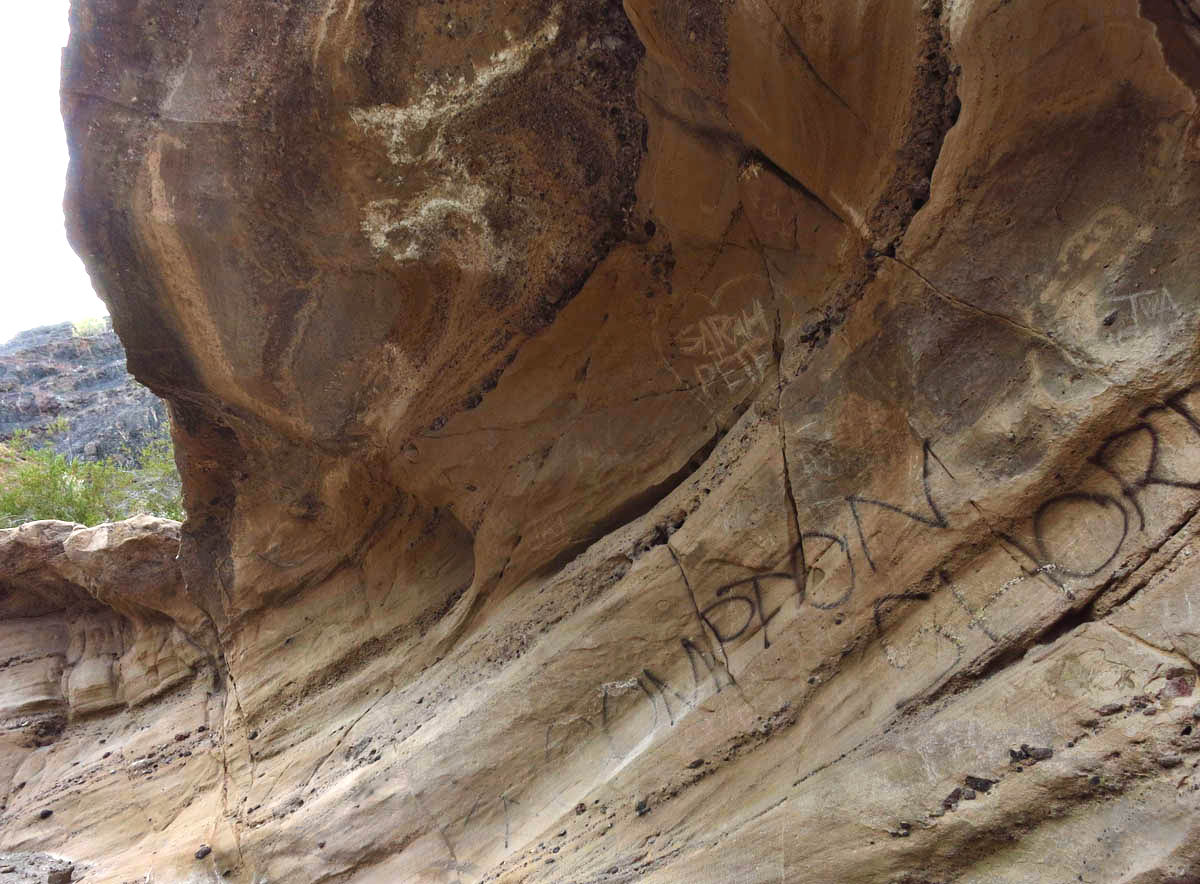 Debbie had arrived a couple of days before me and found us a great spot hidden up and over a hill where we were out of view, yet still had a view.   We had the benefit of beautiful sunsets and moon rises, without the white walls of neighbors blocking our view.  The area south of Lake Havasu near SARA Park was a bit of a “revolving door,” with everything from squatters to transient snowbirds stopping in for the night, making the extra quarter mile drive over the rough, rocky road to a more remote spot worth it.  But the relentless wind never stopped, there was little to no vegetation, and the dark backdrop of steel-gray mountains against the whiterock road left me longing for the visual stimulation I had left behind in Zion. 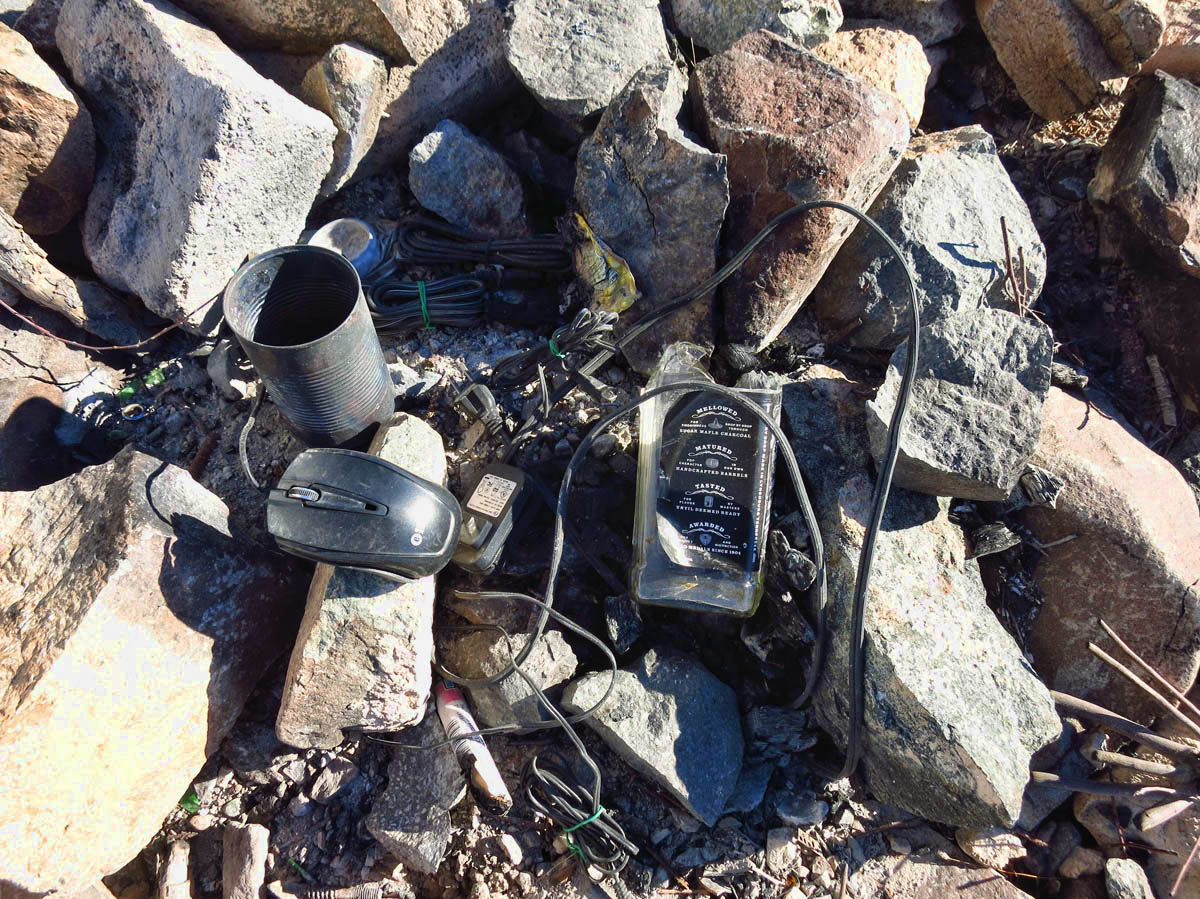 Recycle your old computer equipment in the nearest desert fire ring. Toss in a bottle of Jack Black for added fuel. 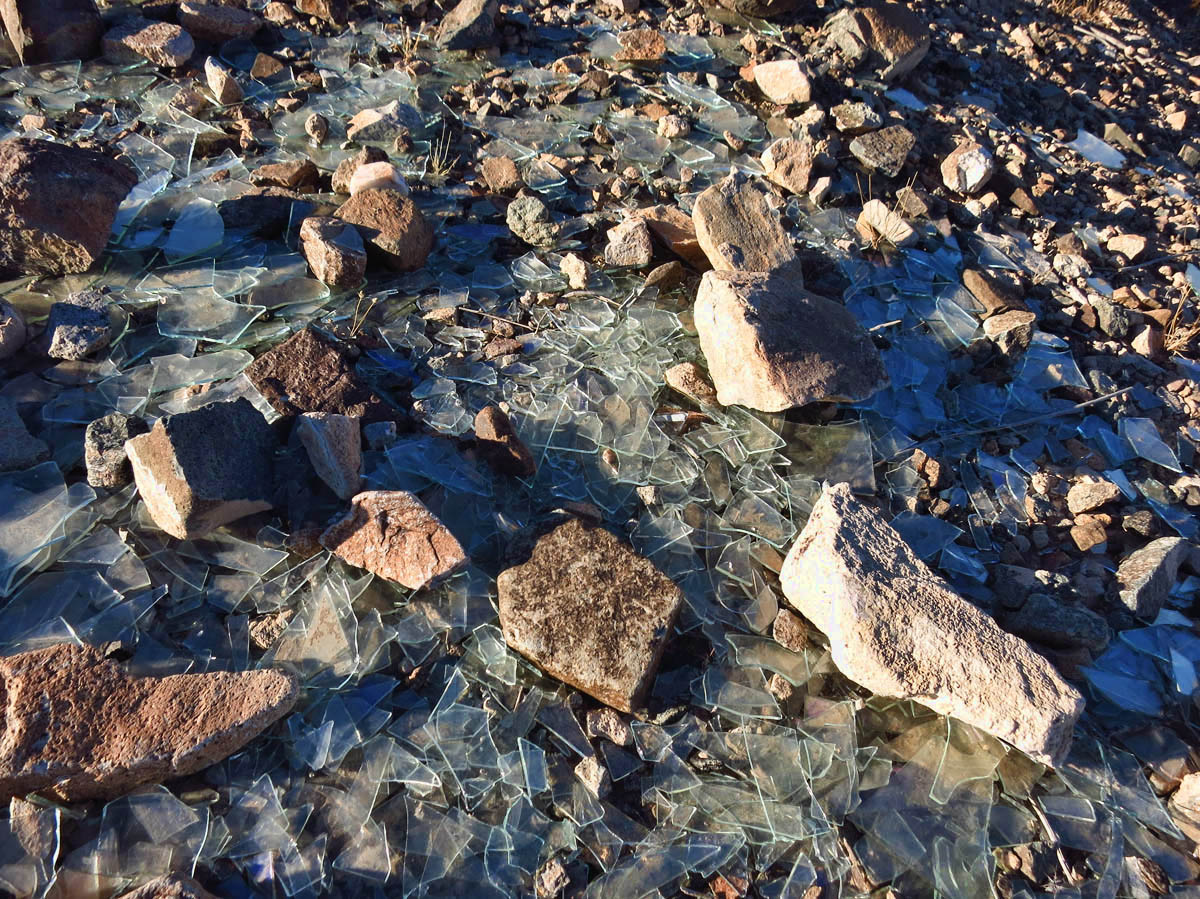 The road to boondocking is paved with shattered glass.

Add to that the fact that the area was covered in shattered glass; bottles, mirrors, window panes, and empty ammo shells.  The sight of surrounding garbage (including a pair of discarded men’s underwear!) in what was once a nice stone fire ring now turned garbage dump was distressing. Despite the companionship of my friends, the desolate surroundings had me slipping into a funk.  I thought many times about getting a trash bag and trying to collect some of the garbage, but it just seemed futile.  I couldn’t put my foot where there wasn’t shattered glass or ammo cartridges.   I will never understand the thrill of shattering glass in mid air, just for the fun of it…especially when most of the shards land in the path of my expensive set of Michelins. 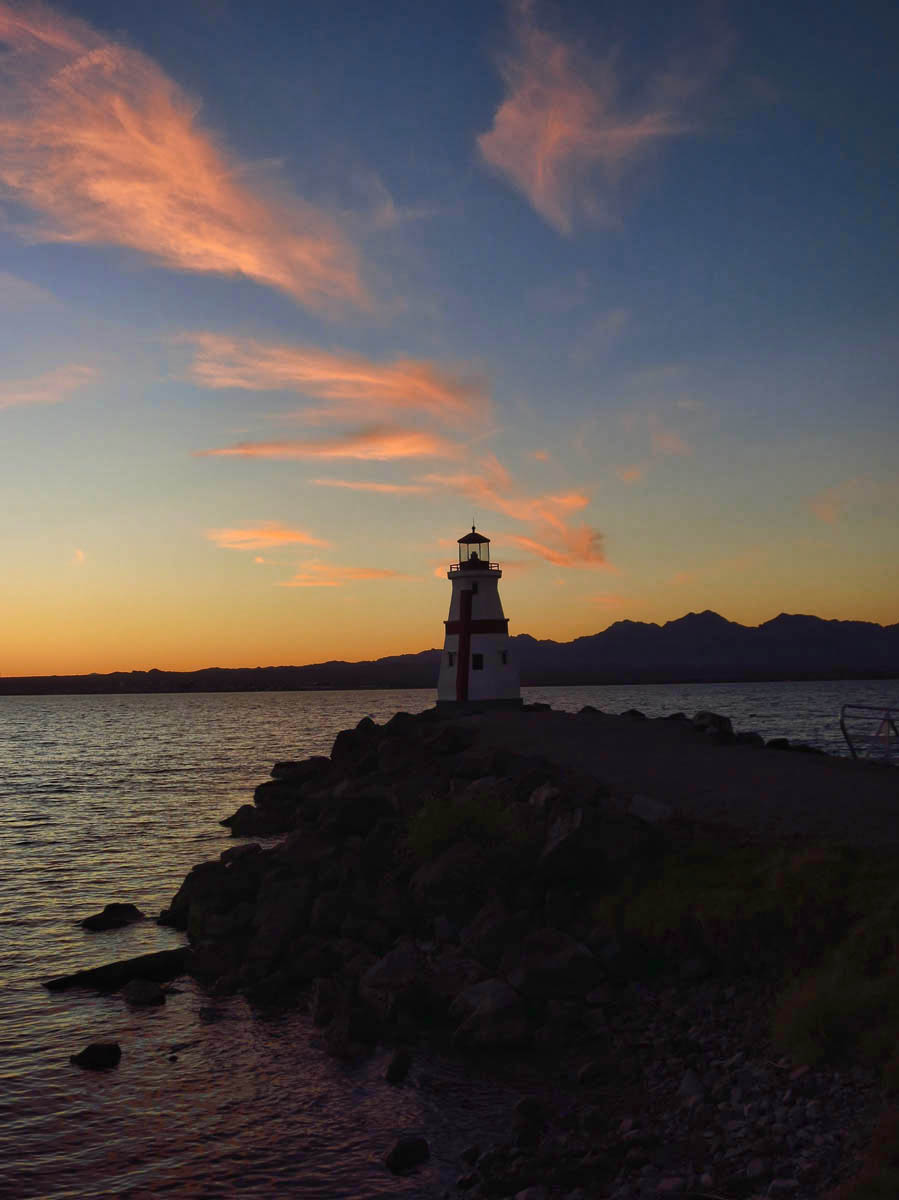 A ride on the casino boat offers some nice scenery 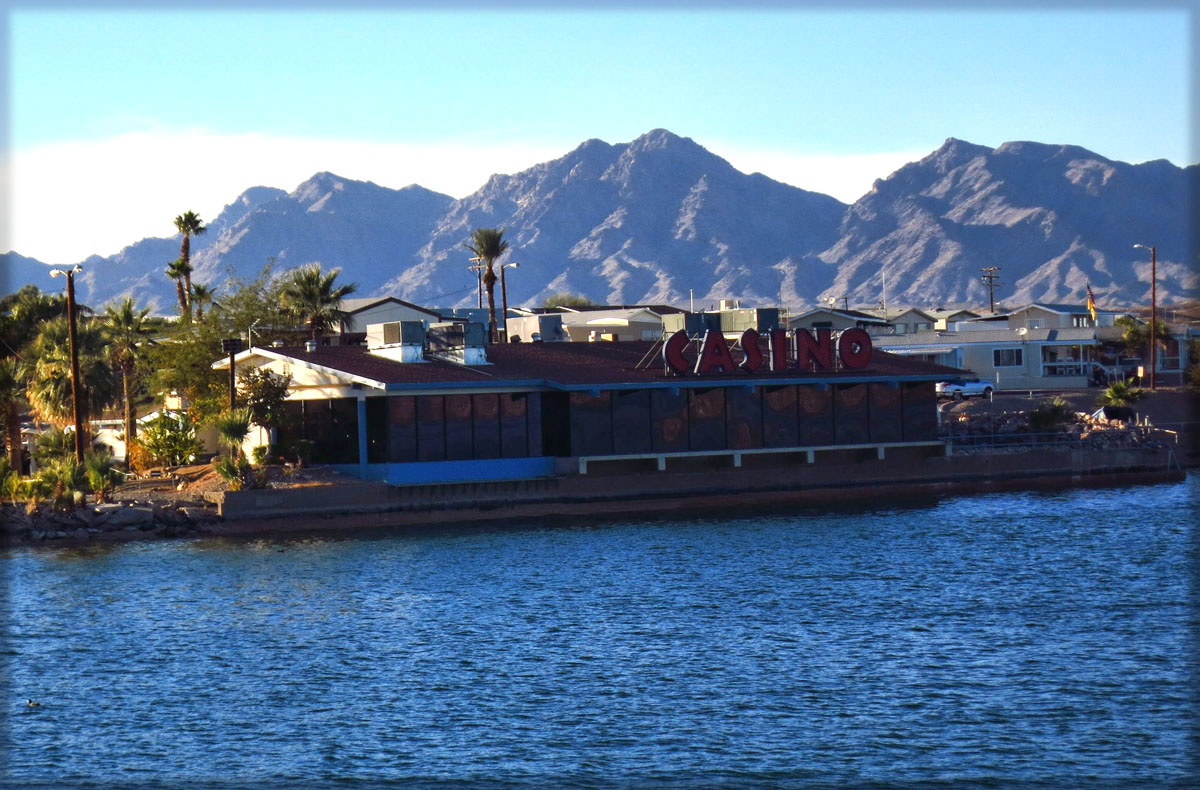 A big fancy boat crosses the lake twice per hour to a not-so-fancy casino on the California side. 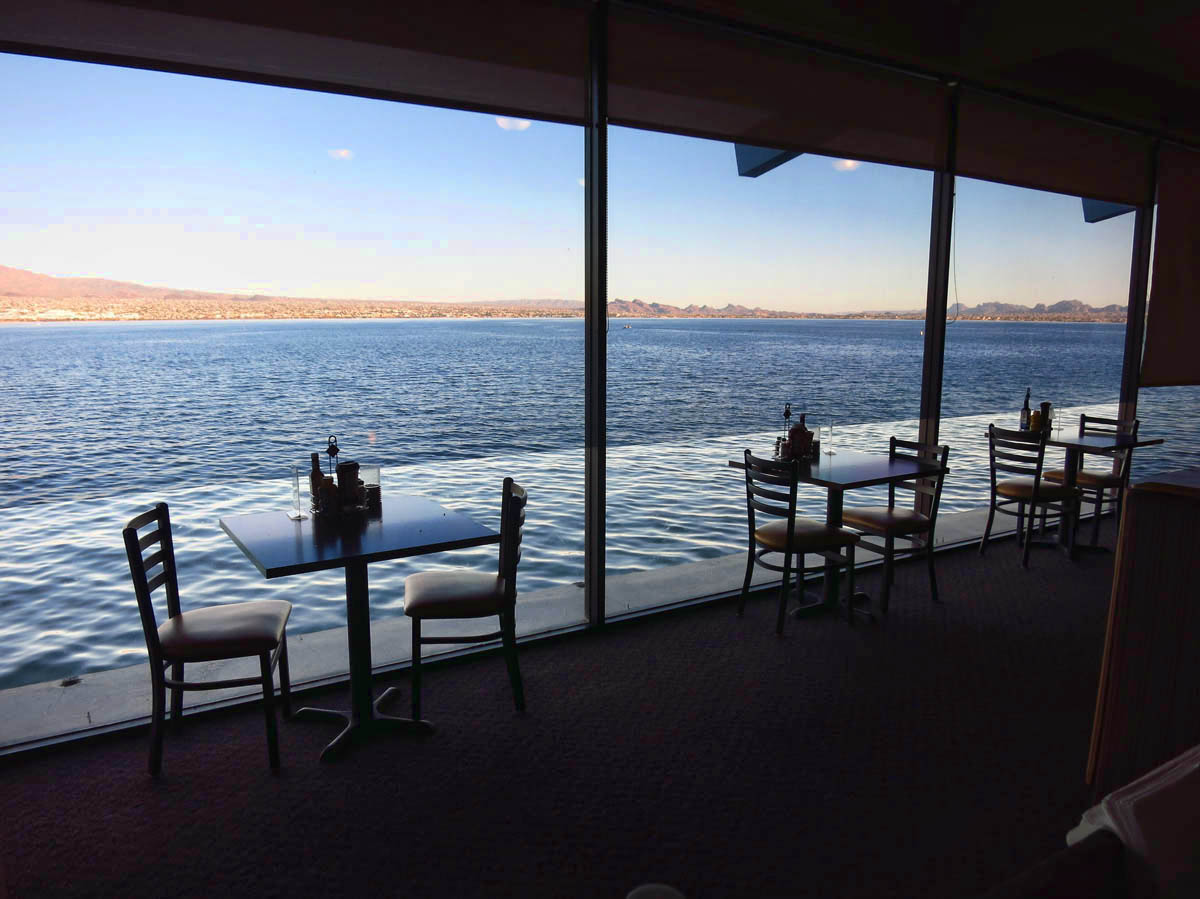 The views from the casino restaurant are the best part of the trip.

Mornings on both sides of Thanksgiving were greeted with sound effects from the nearby shooting range.  Nothing says “peace and fellowship of the Thanksgiving holiday” like the sound of gunfire in the distant hills.   We were also in direct path of the ATV traffic.  The ATV roads ran on all sides of our boondock, and the riders seemed to come in waves.  My particular favorite was the little boy driving his own 4 wheeler, who couldn’t have been much more than four himself.  At least he was wearing a helmet….with a fire engine red “fauxhawk” down the middle. 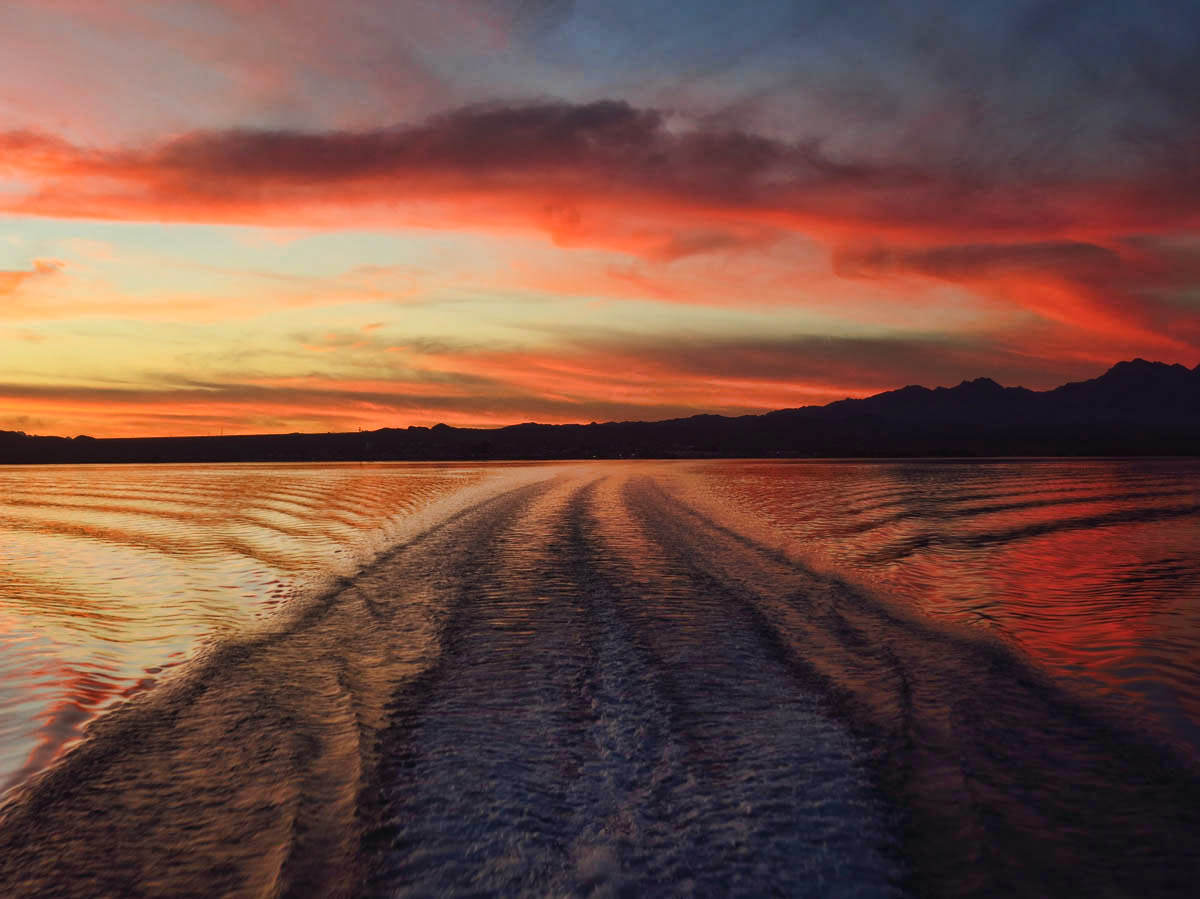 Time the casino boat right, and you get a sunset cruise! 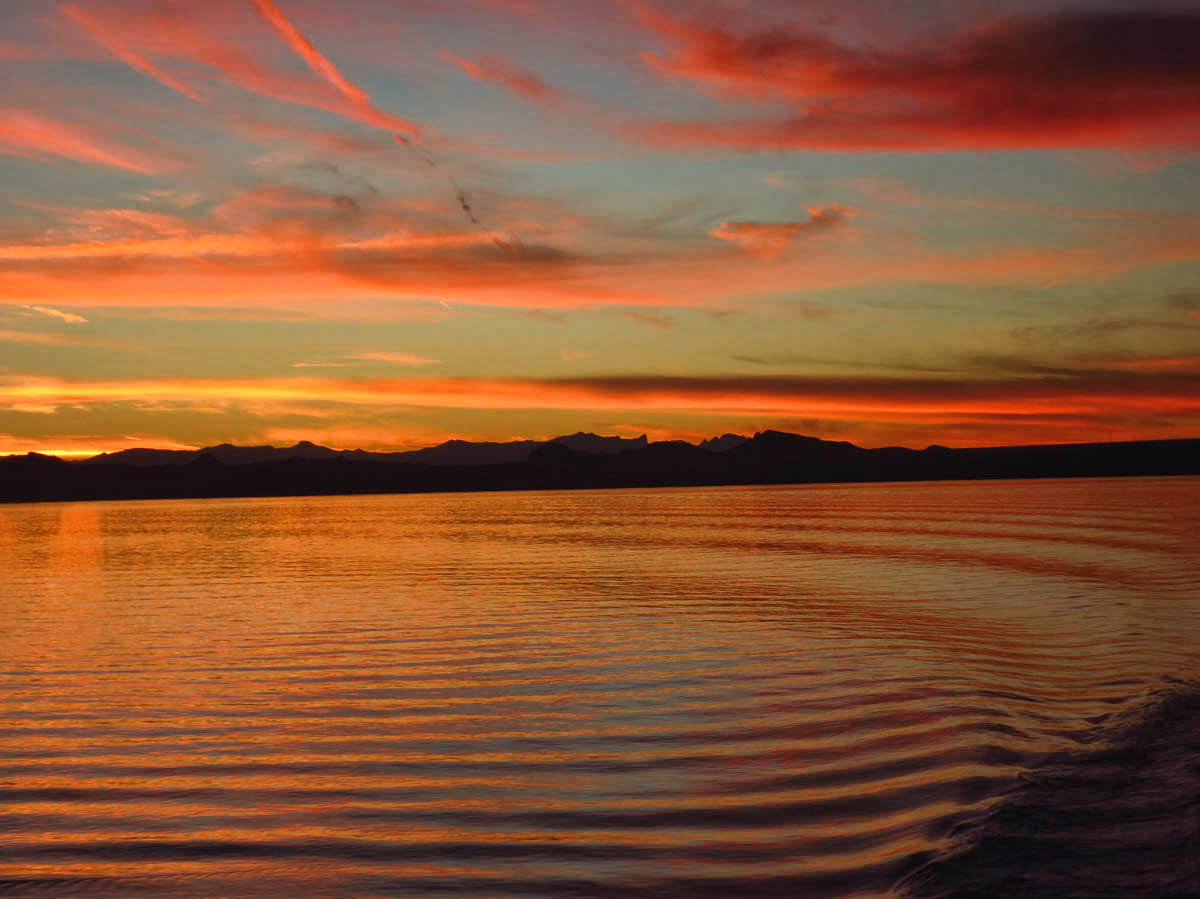 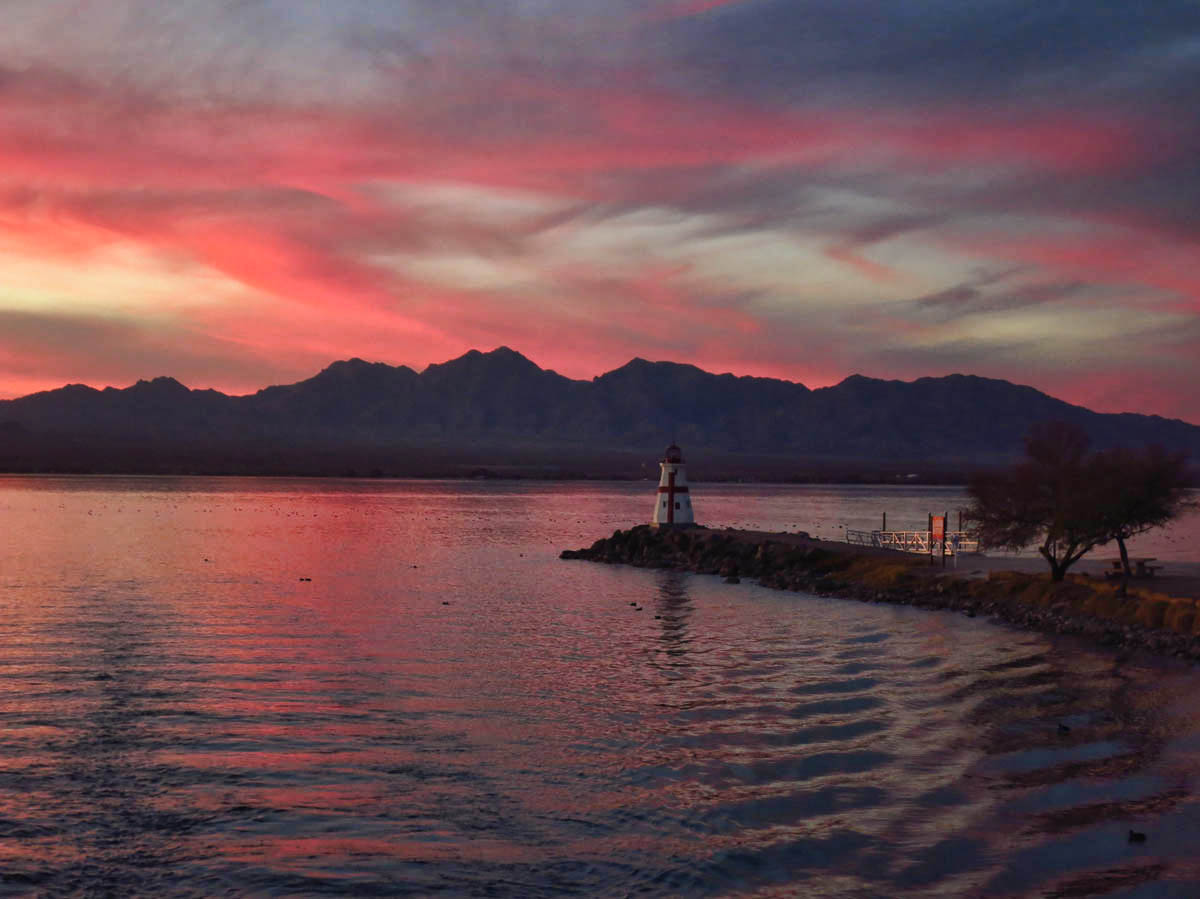 It was soon time for Debbie to move on further south to honor some personal commitments, so with her departure,  I moved into the Lake Havasu State Park in hopes of lifting my spirits a bit.

But before she departed, there was to be one last cheeseburger between us…

I had read about the infamous Desert Bar, aka the “Nellie E. Saloon” on other blogs, and was intrigued.  Named for the old mining claim in the Buckskin mountains near Parker, AZ, this bar and restaurant is completely off the grid.  Water comes from a well powered by an impressive solar array that covers the tin roof.  A giant lithium battery bank powers the refrigeration and sound equipment for the live bands.  And food is cooked on gas grills.  They are only open on Saturday and Sunday from “High Noon to Sundown.” 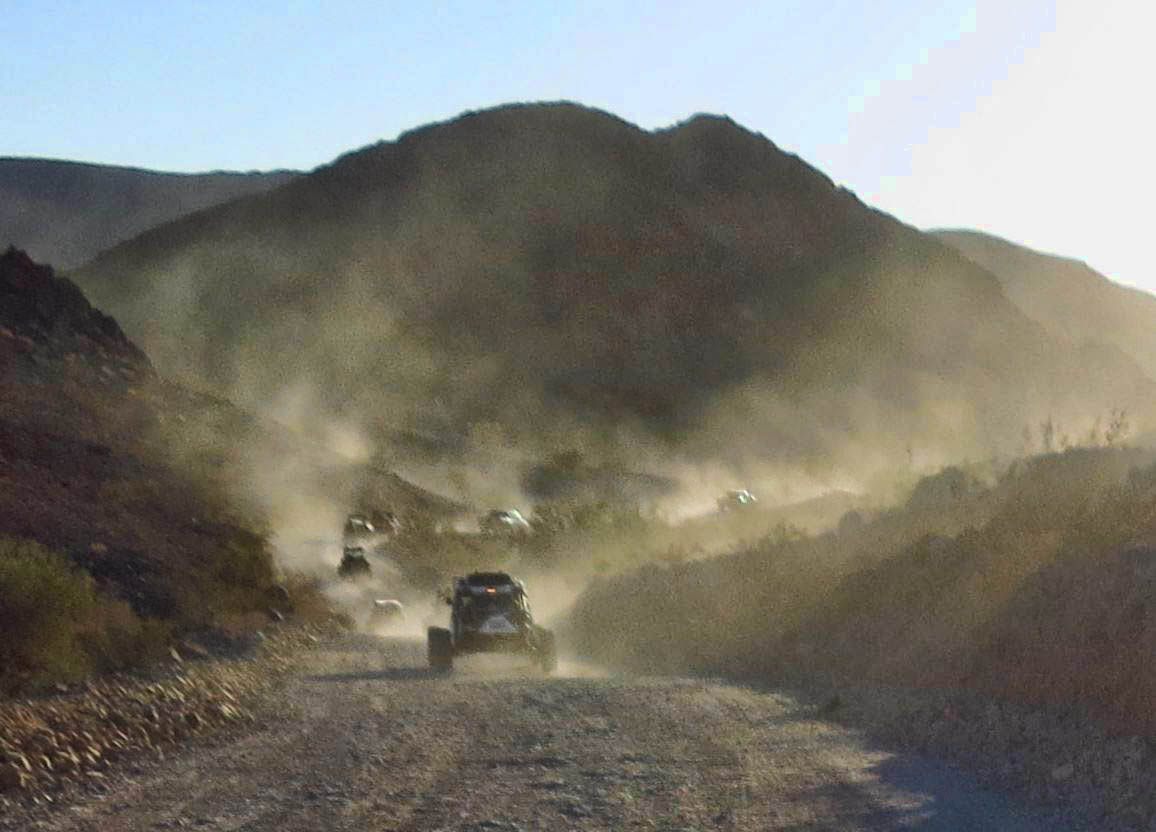 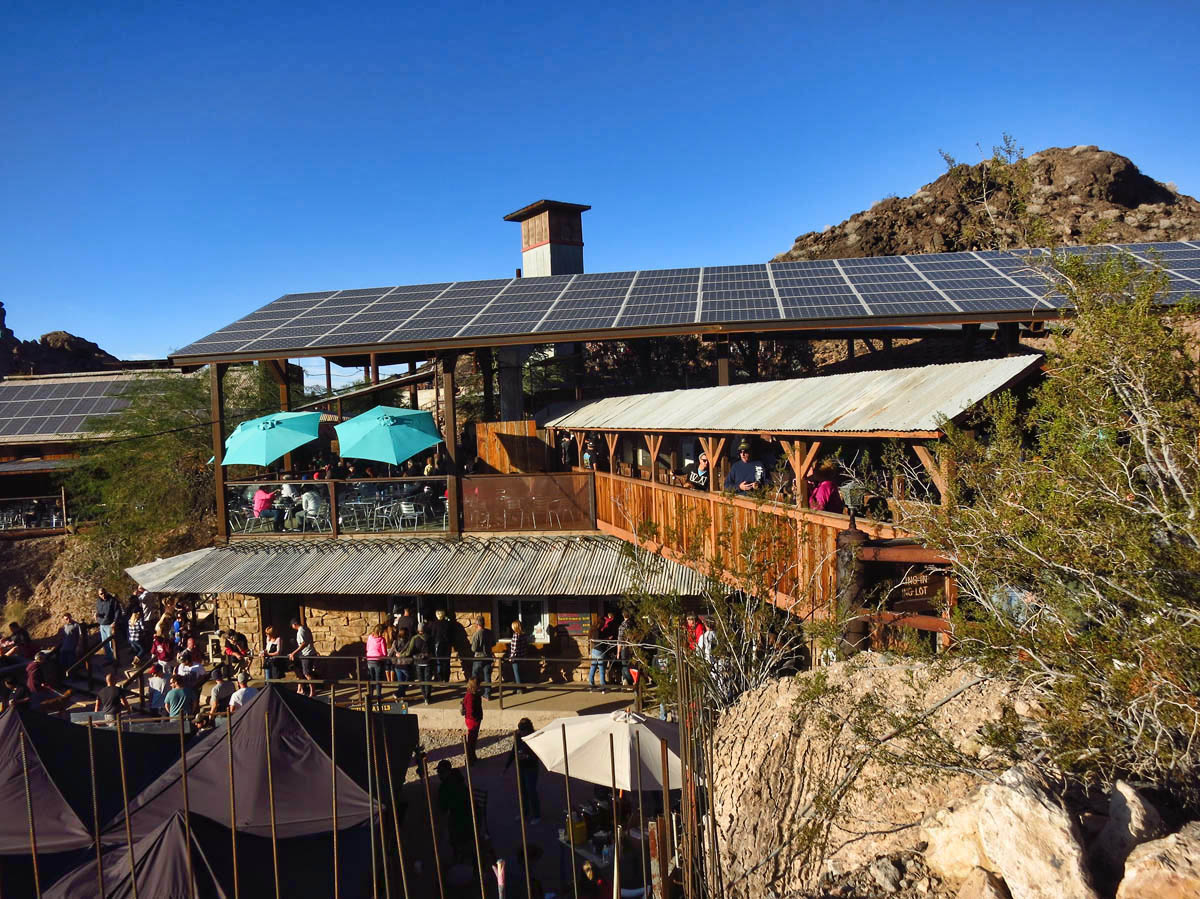 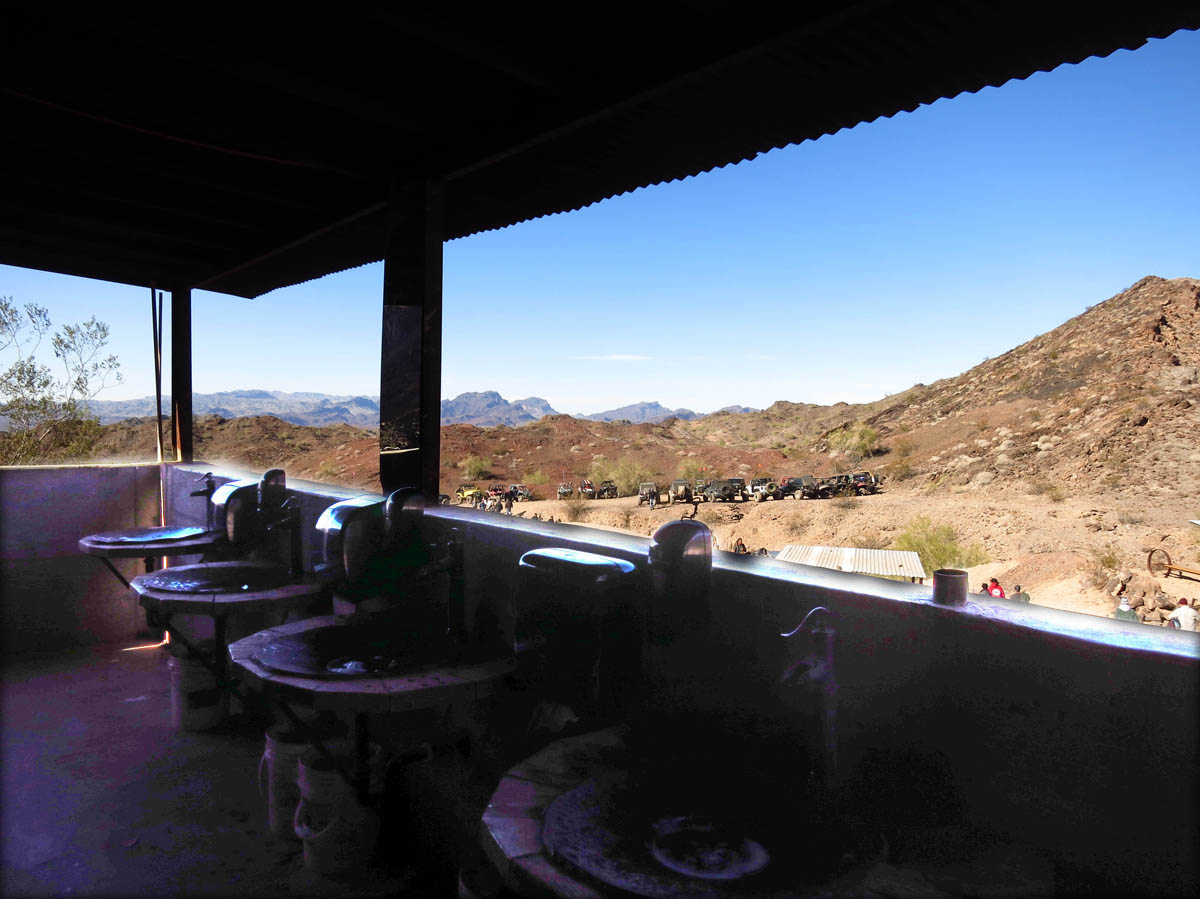 Photo from the women’s restroom. (Contrast in bottom half of photo has been lightened to show fixtures)

There are two ways to get to the Desert Bar, the “Easy Way,” and the “Back Way.”   Since we are traveling in Debbie’s Scion, we opt for the easy way.  If that is easy, I would hate to drive the hard road.  It is gravel, winding, eroded and rutted.   Unbeknownst to us, Thanksgiving weekend is the busiest weekend of the year, so we find ourselves stuck in a back country dirt road rally, sandwiched between big, rumbling dualy trucks and ATVs for the entire six miles.

Less than a mile down the gravel road, we pass an area called “The War Zone,” which seems to be a requisite stop for many over-sized vehicles as they stop along the way to let off a little testosterone by “blowing sh*t up” in the desert before heading to the bar to cool down with a coupla cold ones.  Guys are out there wearing OSHA headphones, shooting at anything that doesn’t ricochet. Ideally.

By this time, I am twisting in my seat.  I feel somewhat responsible for dragging Debbie into the mayhem, as the Desert Bar was my suggestion.  I repeatedly say “It’s okay, I don’t really need to see it that badly! Let’s turn around.  SERIOUSLY!  Turn around before we are caught in the crossfire!”    But my friend Joel assures me that “An armed society is a polite society.” And Debbie is the epitome of the slogan, “Keep Calm and Carry On.”   So onward we go. 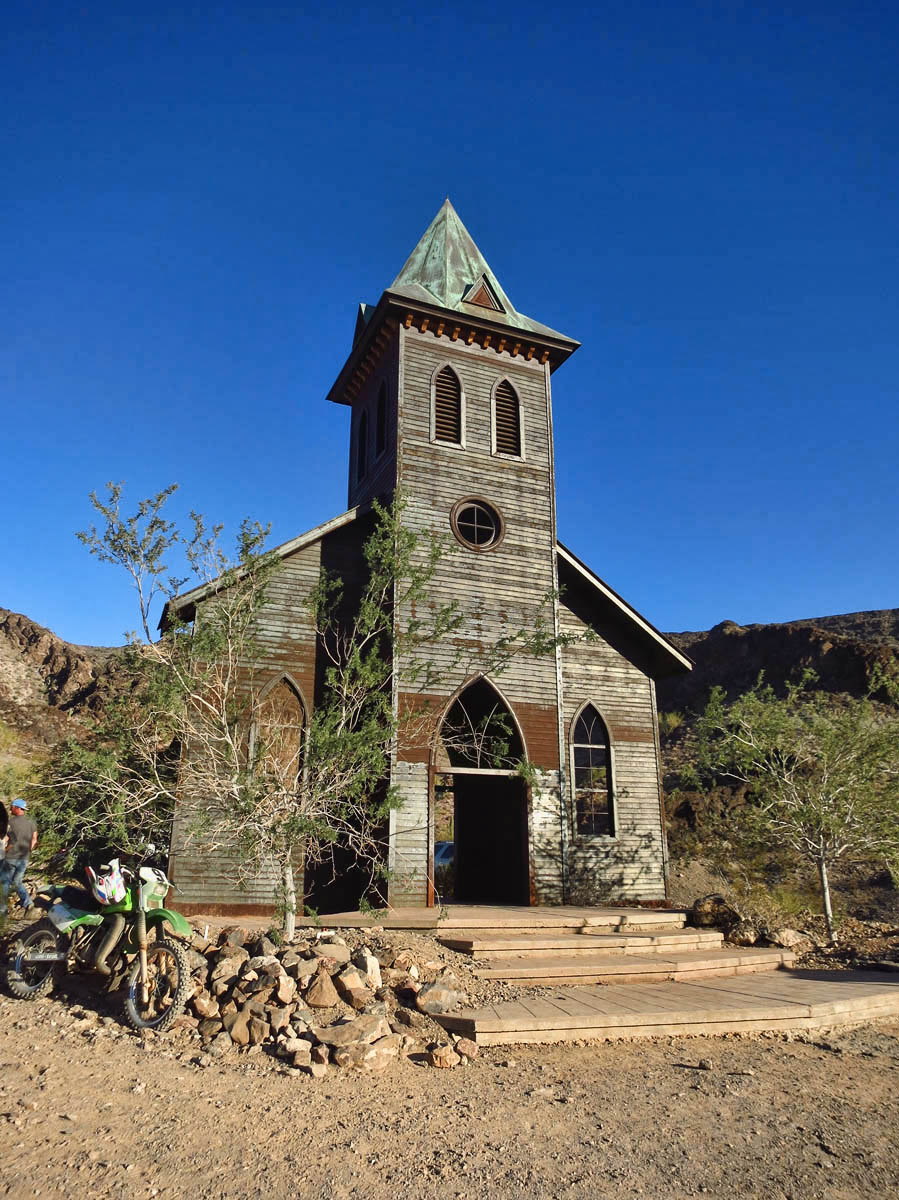 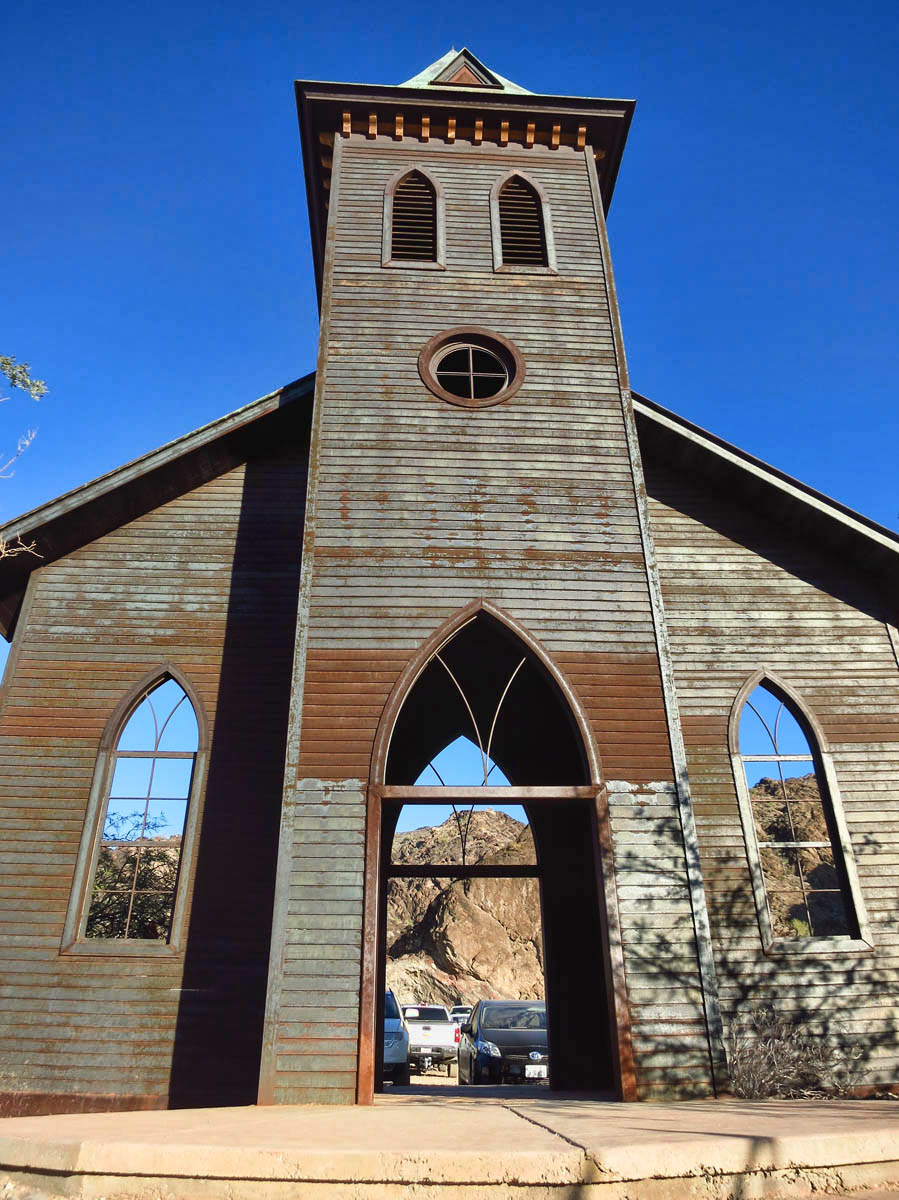 “All religions are welcomed!” My kinda church! 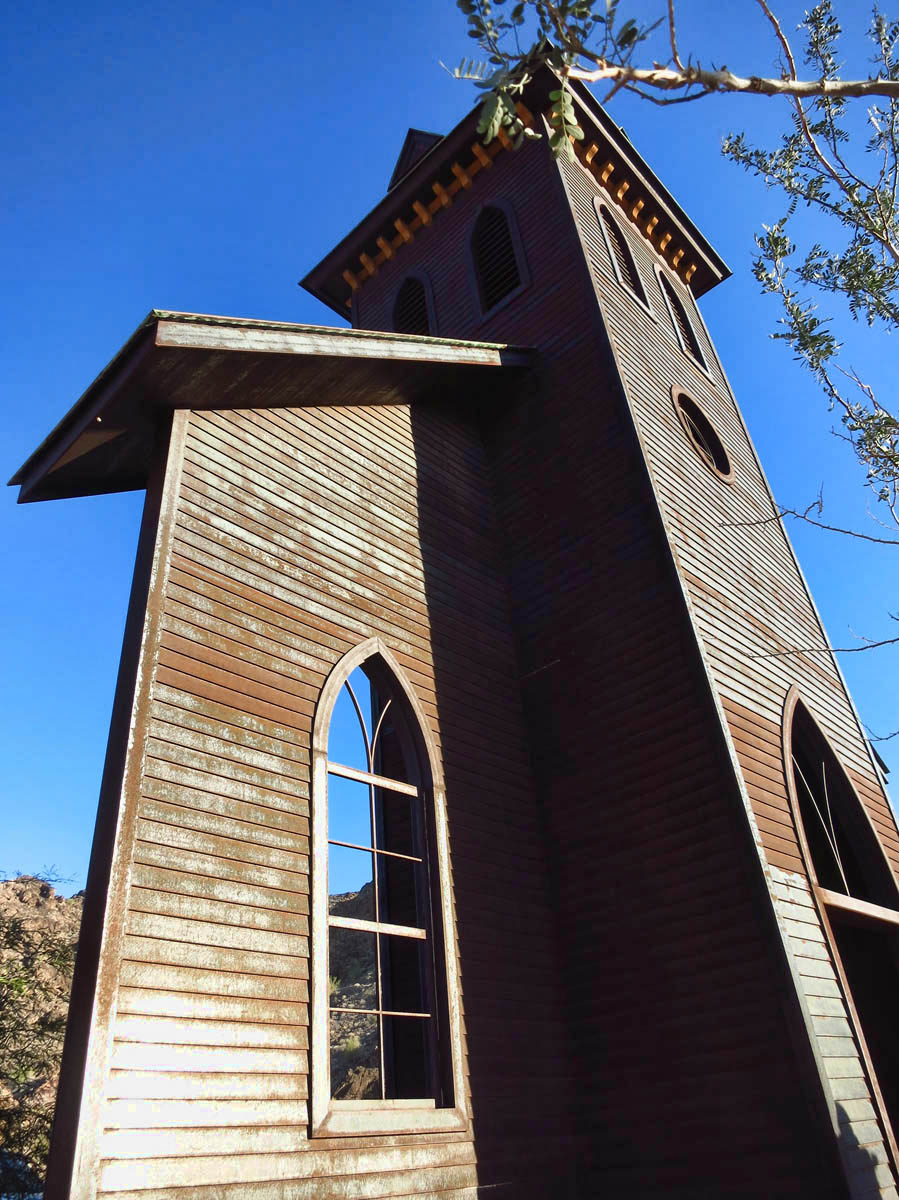 But I soon find out, like a metaphor for most religions, it is just a facade.

The parking lot is packed, and in fact, cars are starting to fill the overflow lot down the hill.  Even though Debbie is driving, I am a nervous wreck trying to find a parking place, as it feels like a free for all with dust swirling, cars honking, and people scurrying every which way. 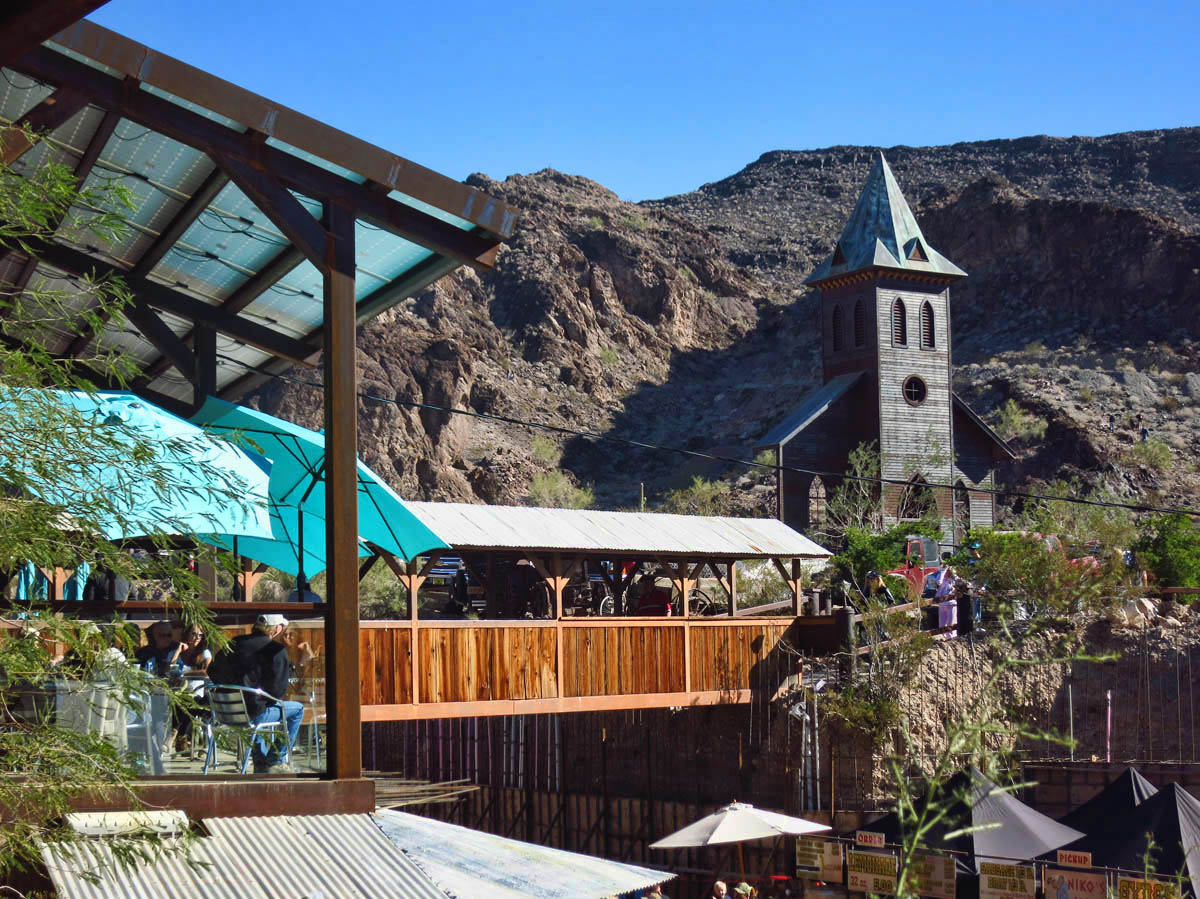 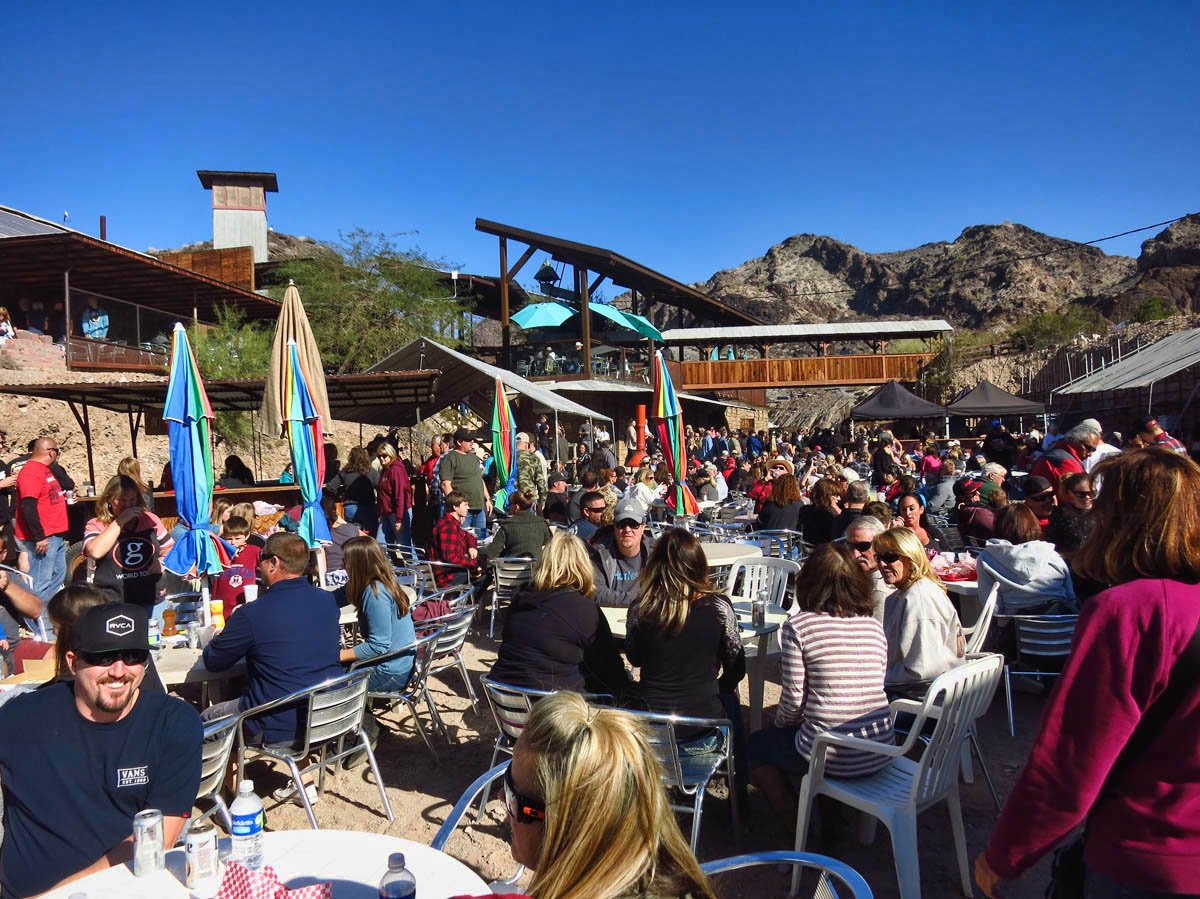 We walk into the compound, a group of open air balconies overlooking a crowded seating area.  People are waiting in line at every food or bar offering.  I decide to get a beer to calm my nerves, only they really aren’t serving “beer” in my opinion — just Budweiser, Miller Lite, and Coors.   We decide to try to get some food.  One of us will wait at the table while the other waits in line….only there are no available tables.  At each obstacle, I say to Debbie, “It ‘s okay…let’s just go.  Really.  It’s not worth it.” 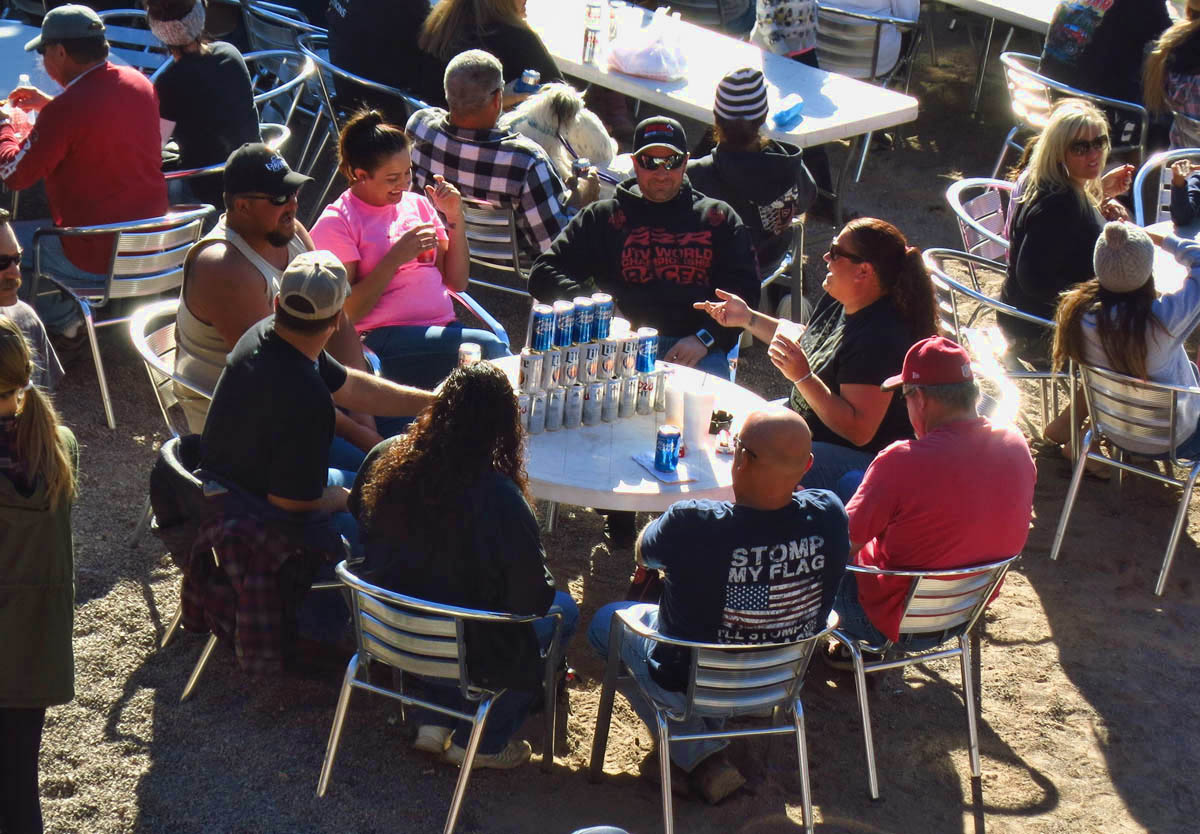 At least Budweiser products are good for something! 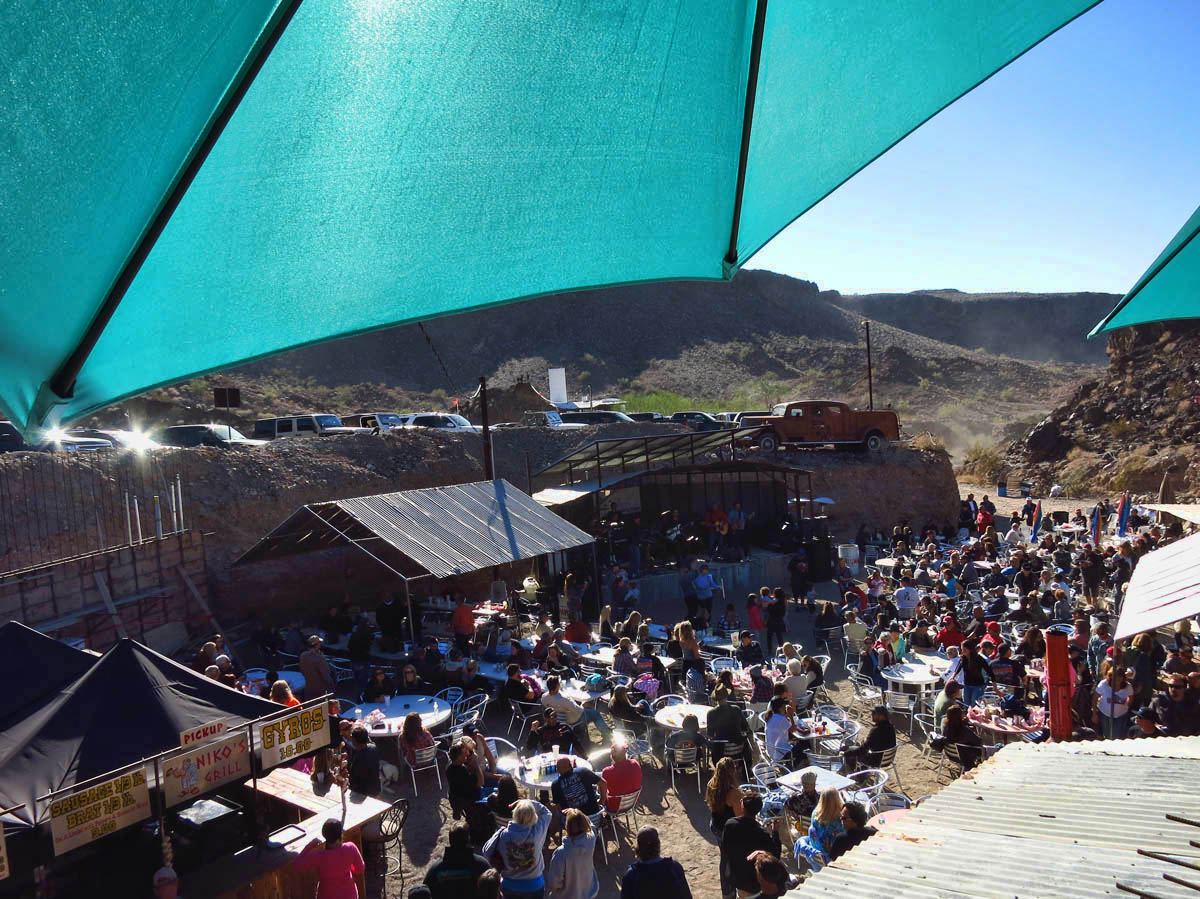 But then our luck turns.  A woman walks up to us and says “You ladies looking for a table?  We have a big one, and we don’t need all this space.”   It’s along the outskirts, out of the frey, on a balcony overlooking the action, great for people watching.  And the music is not too loud, and more importantly it’s NOT country.

I wait patiently while Debbie stands in line for our burgers.   Not only does she return with “Mama’s Stacker burger,” piled high with ground beef, BBQ and bacon topped with an onion ring, she has also brought back a basket of garlic fries covered in scallions and melted Parmesan cheese, tantalizing olfactory glands in her wake.  Add in a cold margarita on the rocks, and all at once, I am assimilated into the desert culture… 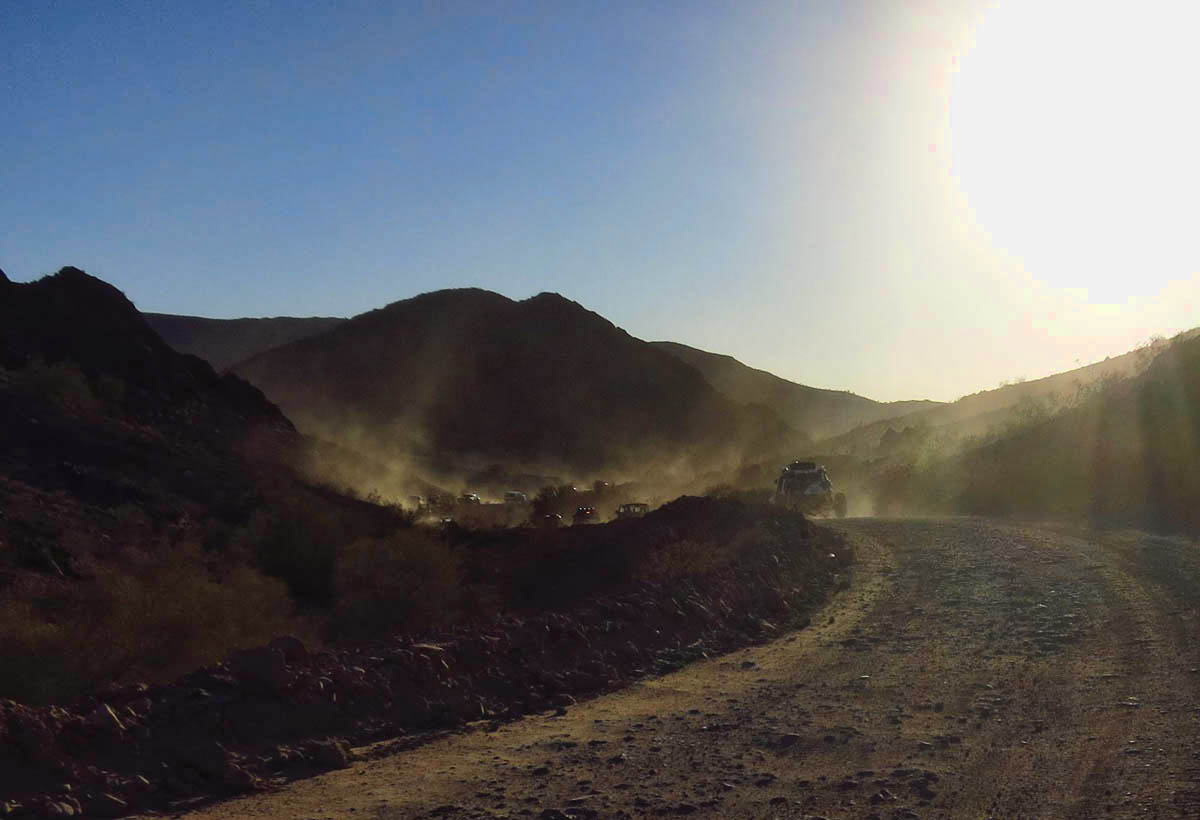