…but it just may be a lunatic you’re looking for! And Yuma definitely felt like lunacy this timearound. I had forgotten about the slow moving blue-haired traffic. The empty Walmart shelves desecrated by the onslaught of snowbirds. The weather extremes. Last year, I was in shorts and a tee shirt. This year? Wearing fleece and sleeping in wool socks while bolstering against the wind.

I came to Yuma with specific needs this year, and in spite of the lunacy, I found what I was looking for…oil changes, car and RV washes, propane, an efficient Laundromat, a movie (The Revenant…riveting!) a Date Festival, and even a hike or two.

I got a free coupon in the Quartzsite “big tent” for three free nights at Fortuna del Oro “resort” which ended up being the perfect place to get some things accomplished. No sales pitch, and the best hot shower I can remember in a long time. Papi came to my site to wash both the RV (roof included!) and the Tracker for the tidy sum of $45. If I come to Yuma next year, I will use him again. 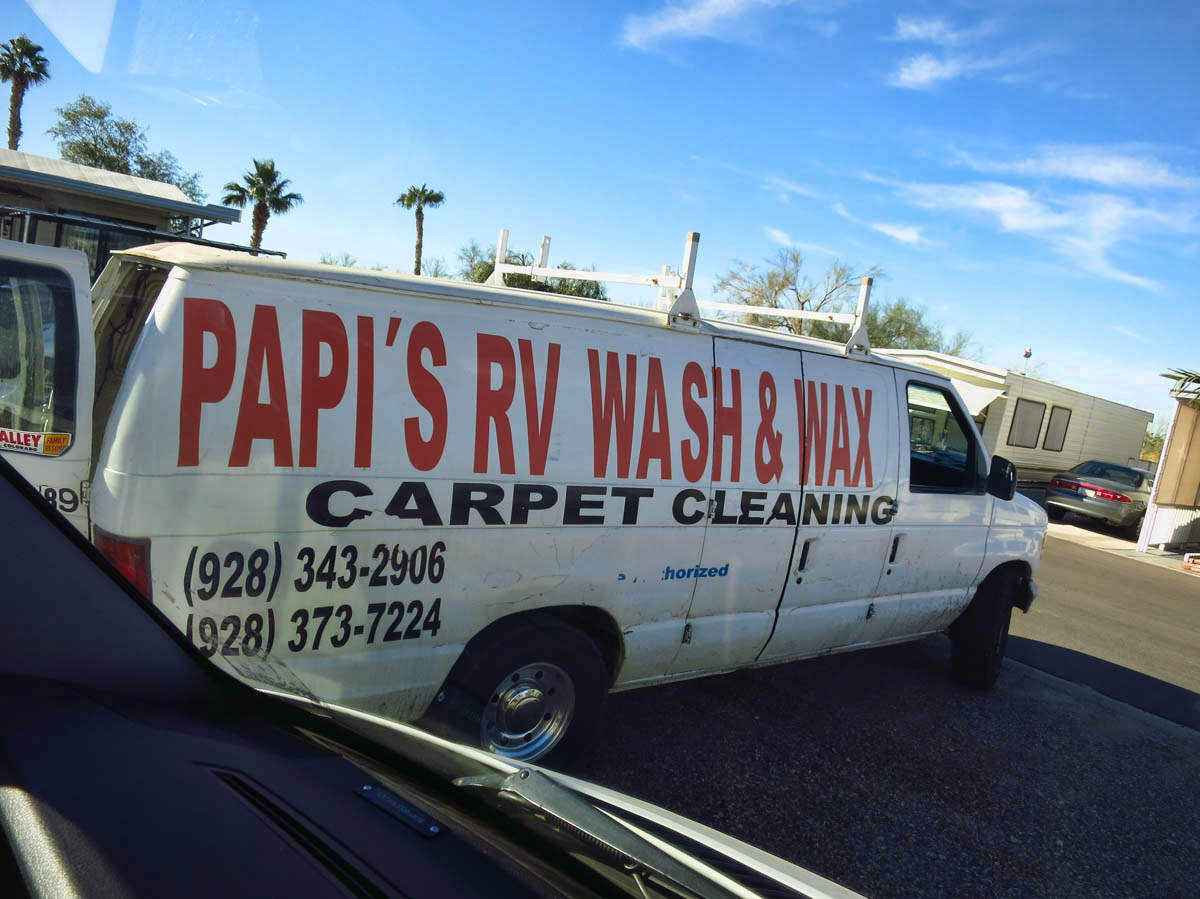 Papi did a fine job of washing both vehicles for only $45.

Dr Eva was “away” while I was in Yuma, so I tried out a new dentist at the recommendation of Metamorphosis Hans and Lisa. Dr. Maria Fonseca was very personable, gentle, and thorough. Her offices are brighter and more modern than those of Dr. Eva. If I come to Los Algodones next year, I will use her again. 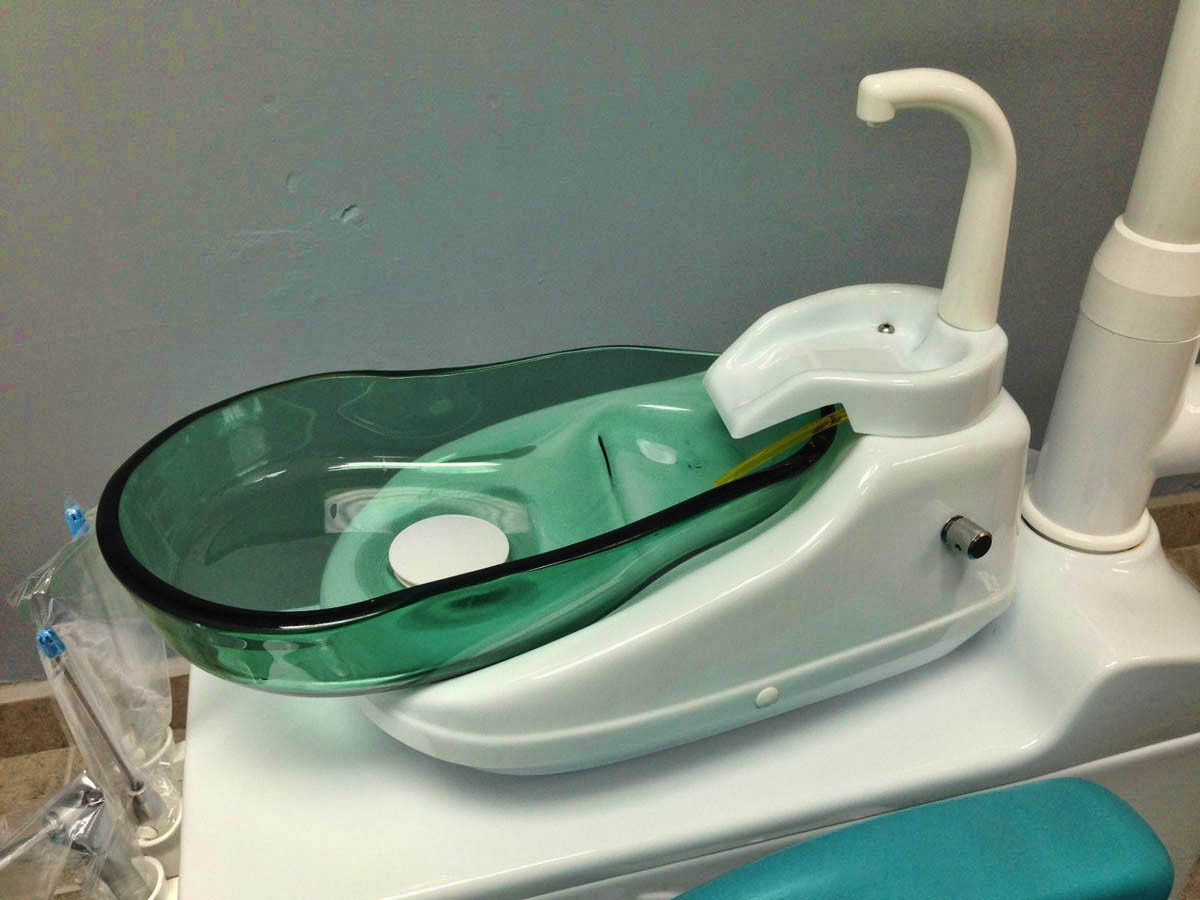 Dr. Fonseca has the fanciest “spit sink” I have ever seen! 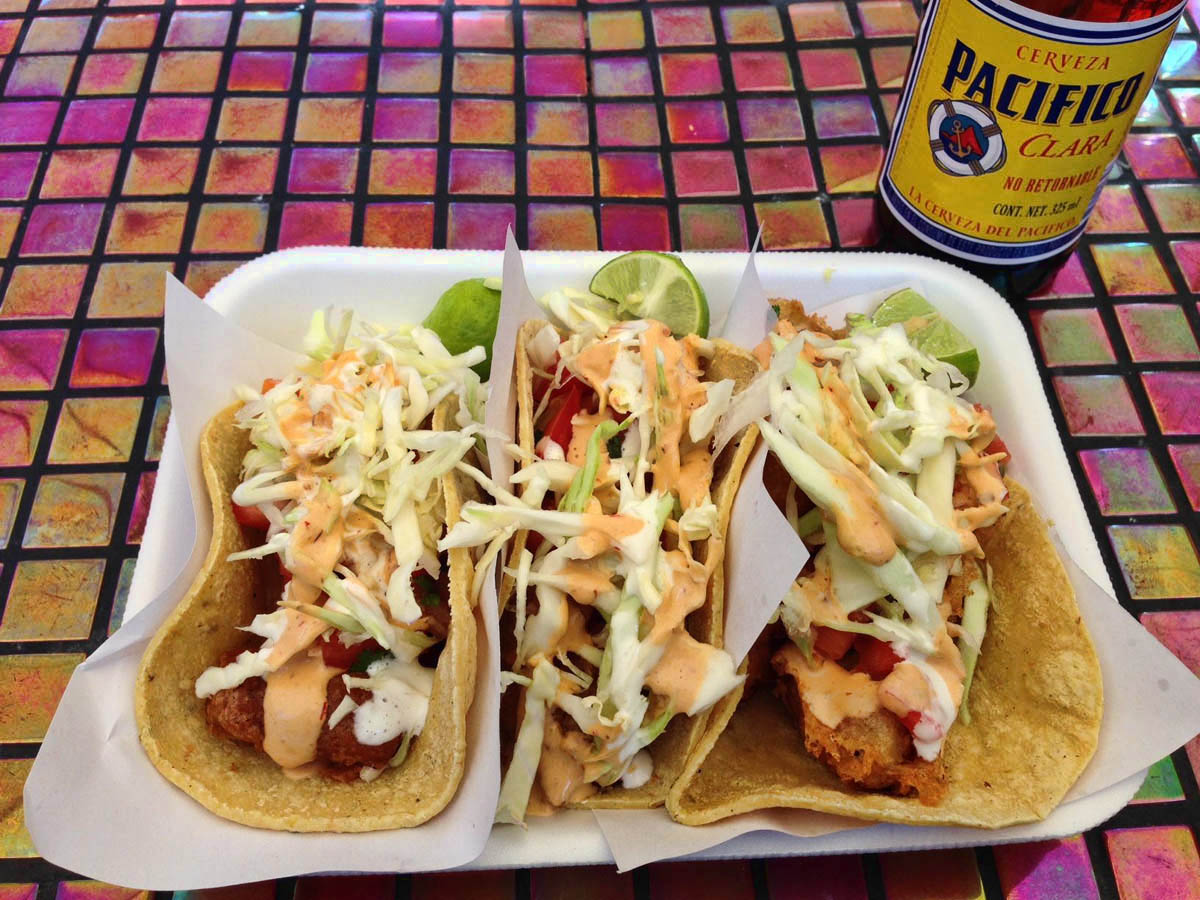 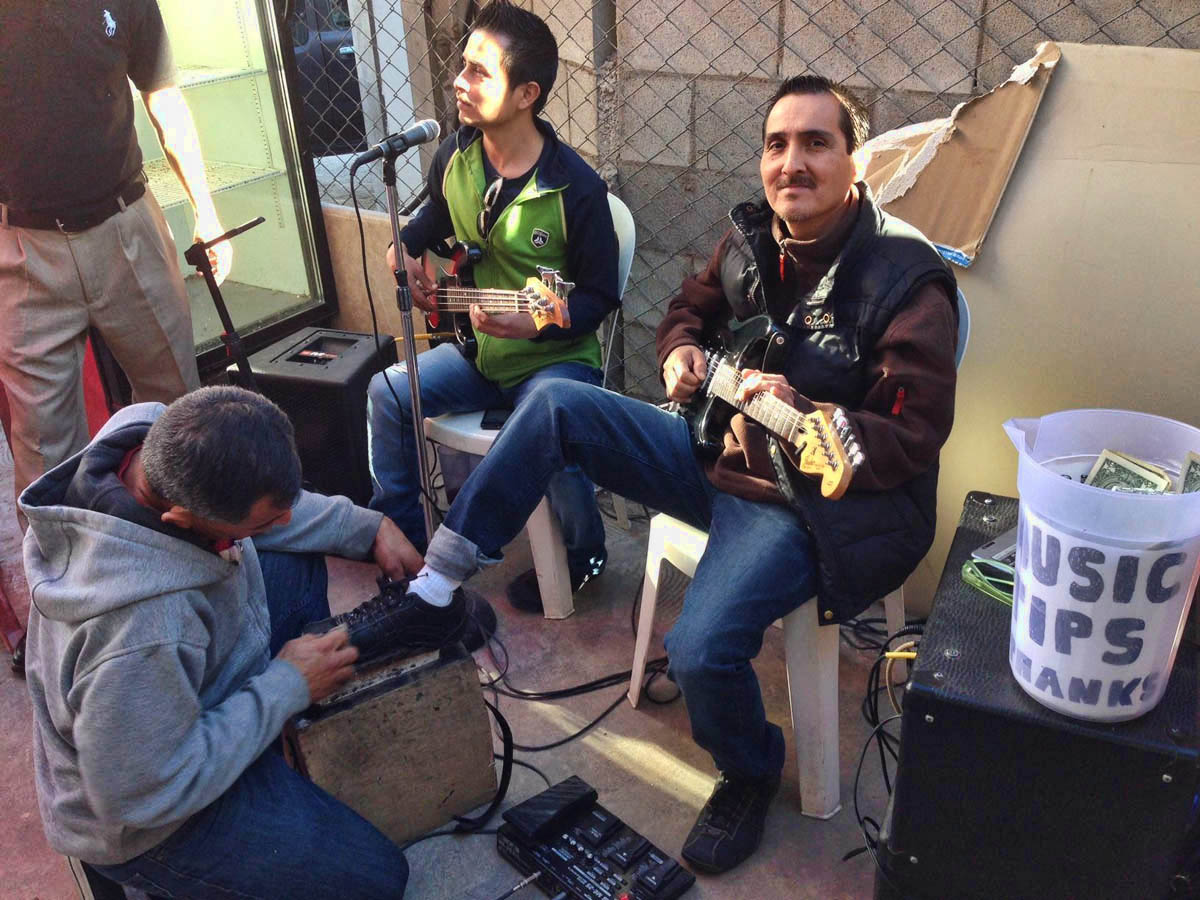 These guys are singing my favorite Mexican song, “Tu Carcel” while having a shoe shine. 😉

The lunacy of Yuma is that it seems really loud this time around. I can’t seem to find a place to escape it. The howling wind gusting and thrusting my Winnie from side to side. The drone of traffic on I-8 outside my window. The incessant chatter of conversations from spandex-wearing women on the hiking trail. One continuous steady stream of Spanish words, never ceasing for so much as an inward breath. Blaring cajunto music coming from boom boxes toted along the trail. The man screaming at the waitress because he asked for “jalapeno peppers” and she thought he said “jalapeno poppers,” while another man shouts on his speaker phone as I try to eat my lunch. The kung fu attack film blaring from the TV set in the Jiffy Lube. The jack hammer air gun in the Discount Tire store. What you resist persists, and the more I try to escape the noise, the greater the volume. There is no escape, as I find myself grounded in the mother of all dust storms. Winds are predicted to gust up to 45 mph! I’m not going anywhere! Trapped!

In attempt to ease my frustrations, let off some steam, tap into some endorphins, find something to quiet my mind, I opt for a climb up Telegraph Pass late on a Monday afternoon in the middle of the dust storm. By the time I get across town, the sky is brown. Still! Must. Get. Out!!

It’s downright blustery, but I bundle up. I am relieved to see the parking lot is almost empty. I only see one other person on the trail, and he is hurriedly on his way down. I climb as fast as my lungs will allow until finally, I reach the point deep and high in the canyon where I can hear nothing…no highway roar, no mindless chatter, no cheap tinny speakers, no cell phone conversations. Nothing but the sound of the stiff, unseasonably cold wind fluttering my pants legs. It feels oddly soothing. Up ahead, the golden light filters through the cloud of brown LA haze that blankets Yuma like a tea-stained shroud. The late afternoon sun penetrates the cloud, casting a warm glow on the earthen brown of the mountains surrounding me. I find myself digging deep into my backpack for my trusty Canon camera which I haven’t touched in over a week. And just like that, I am calmed in the midst of the storm…

“Solitude is not something you must hope for in the future. Rather, it is a deepening of the present, and unless you look for it in the present, you will never find it.” ~ Thomas Merton, monk 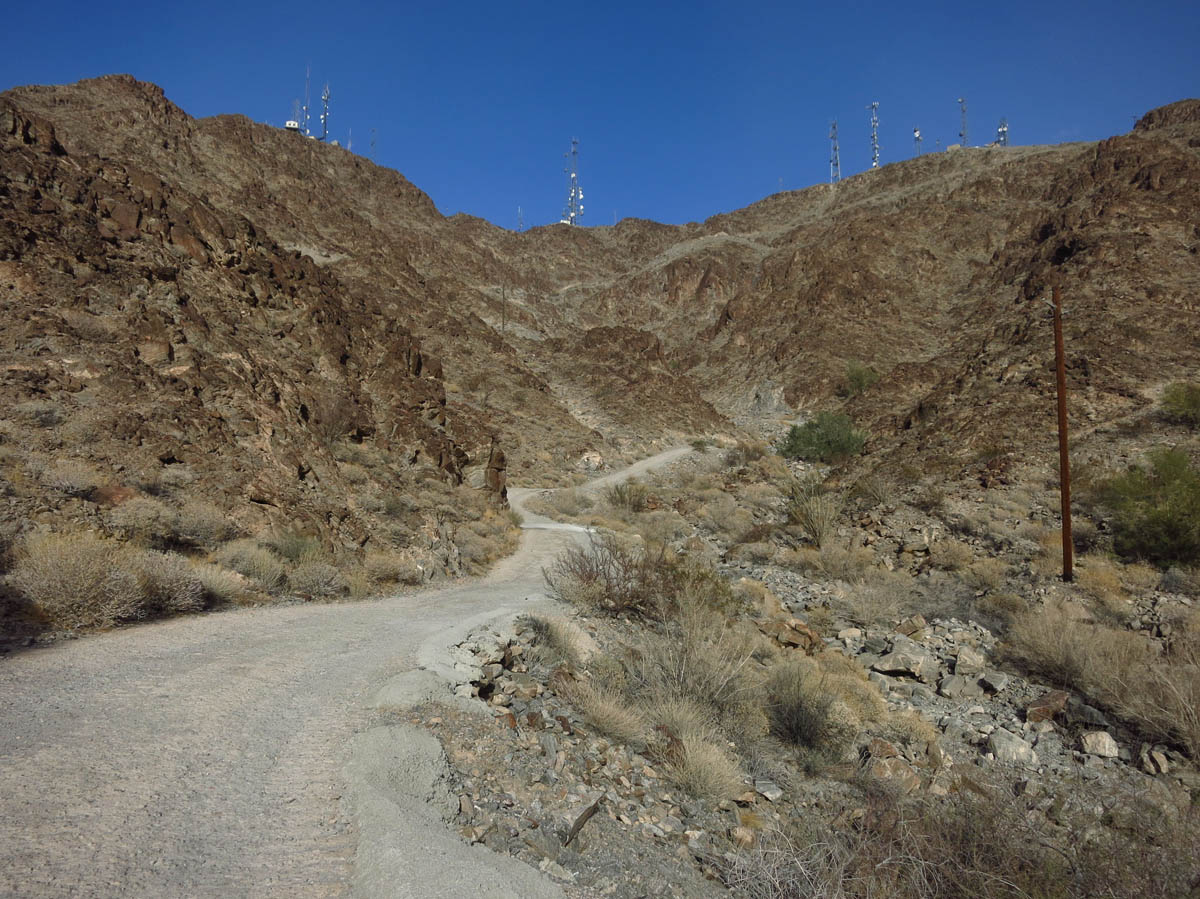 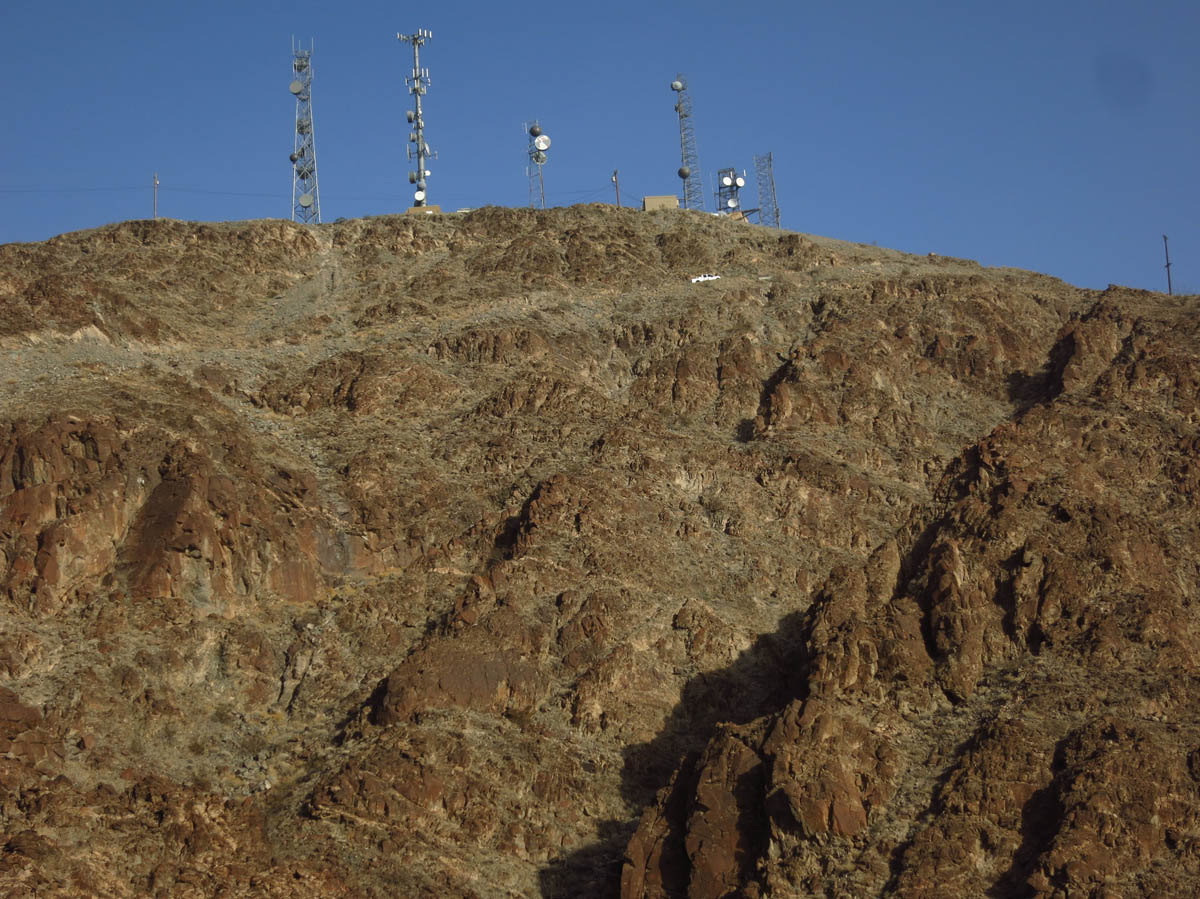 See the white speck two thirds up the hill? That’s a guy on his way to work. Some commute! 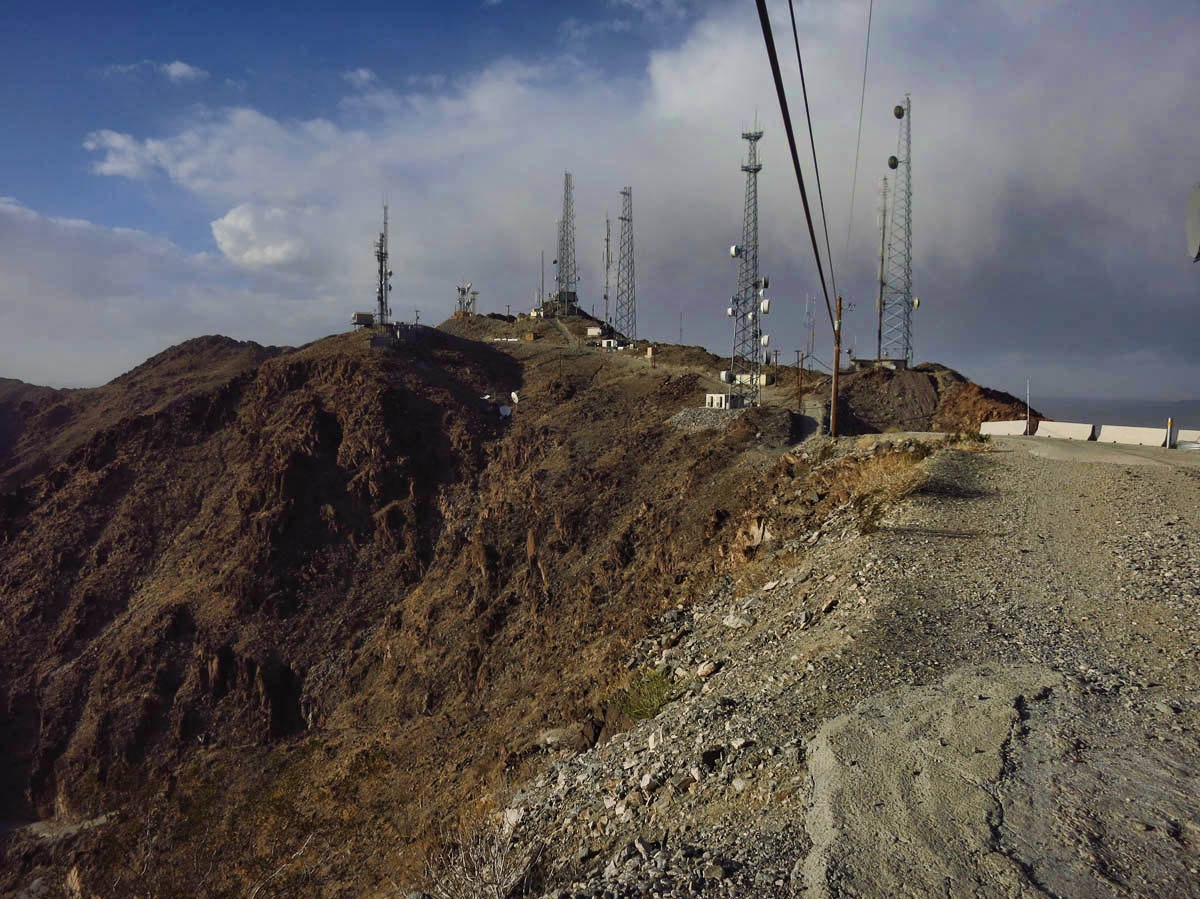 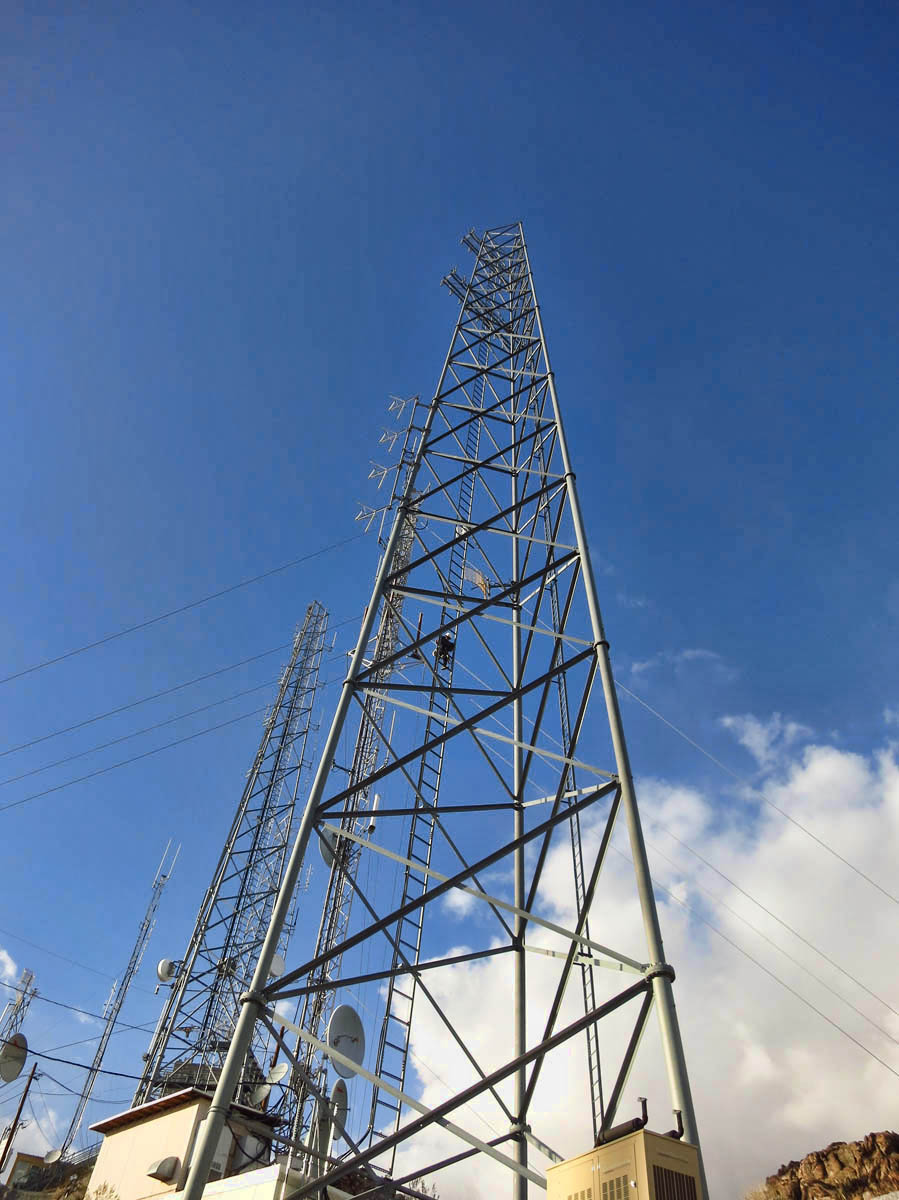 You wouldn’t believe the wind on this day. This poor guy got all the way up here, and then BANG! He dropped the tool he was using, and had to climb back down to retrieve it. 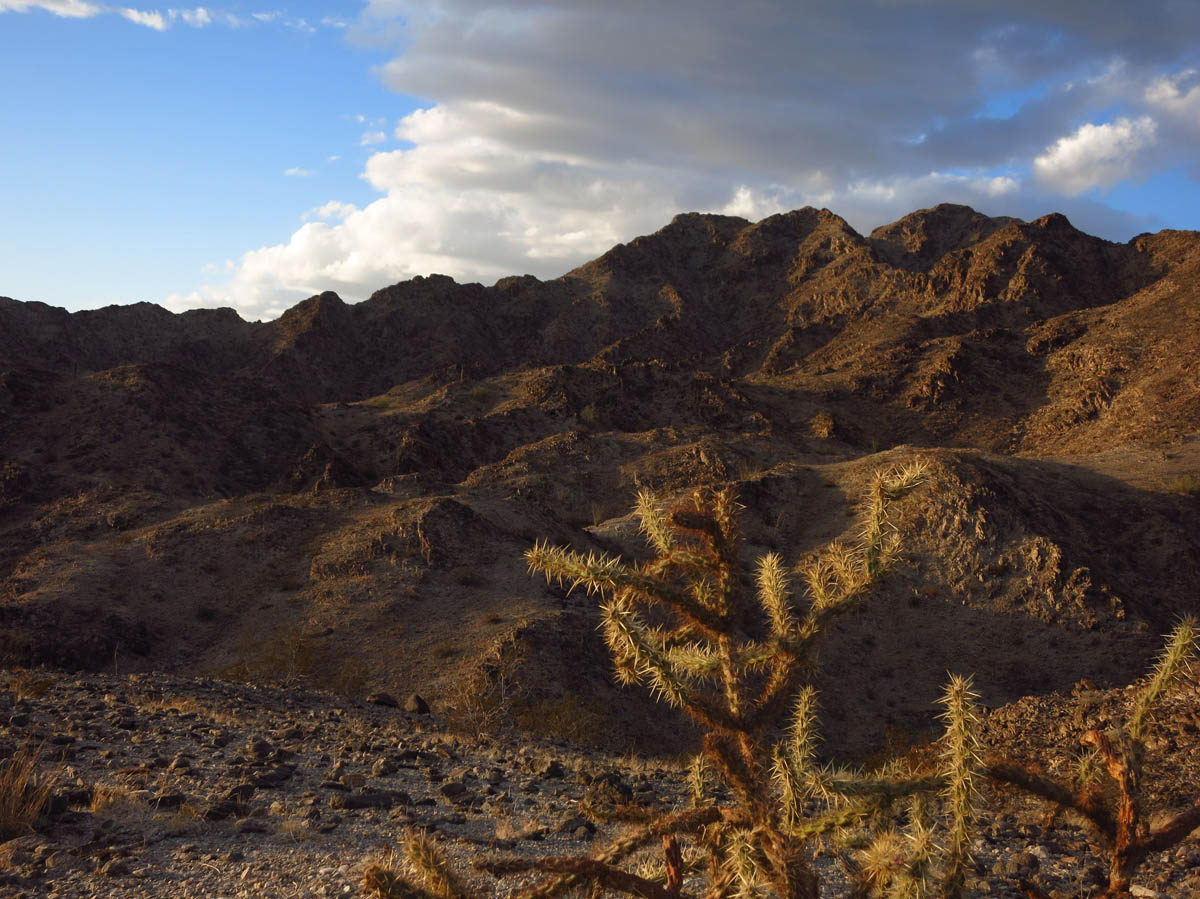 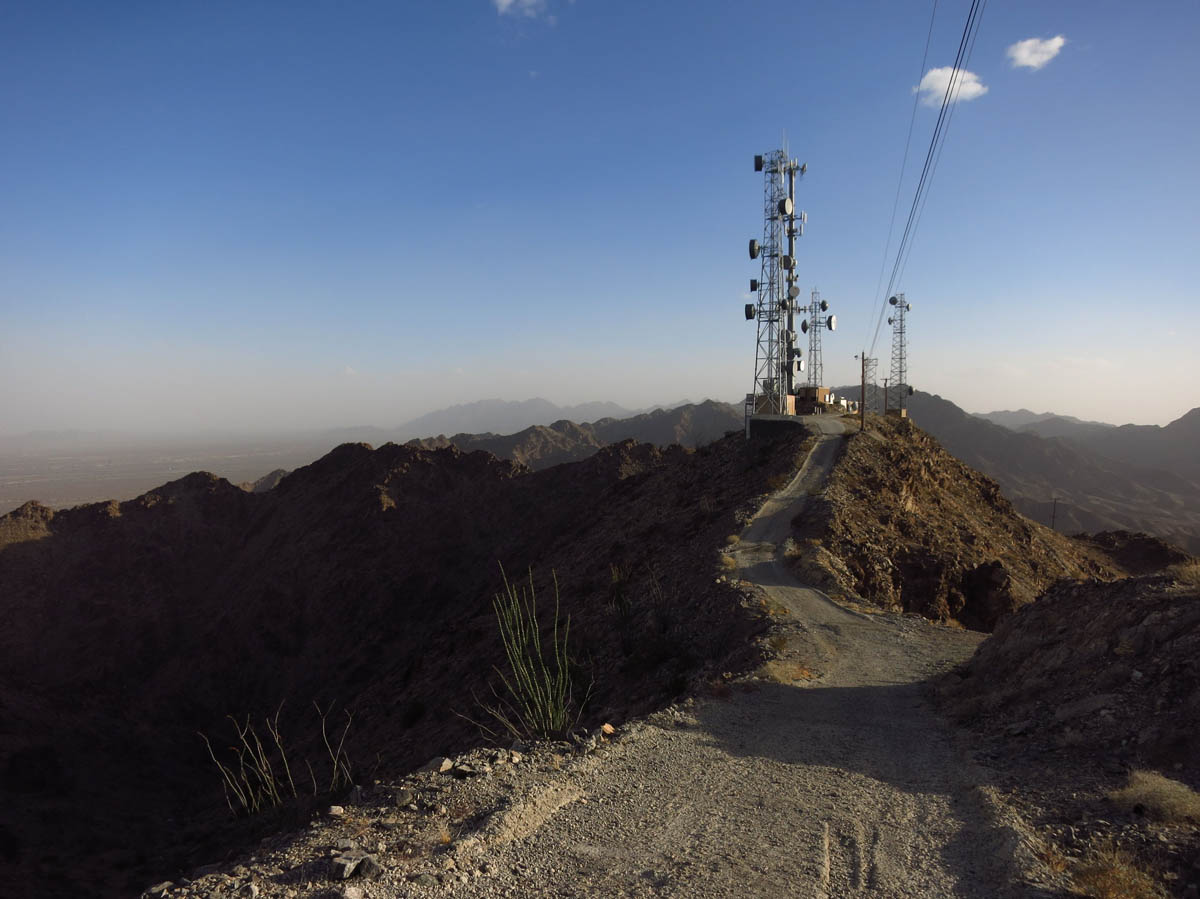 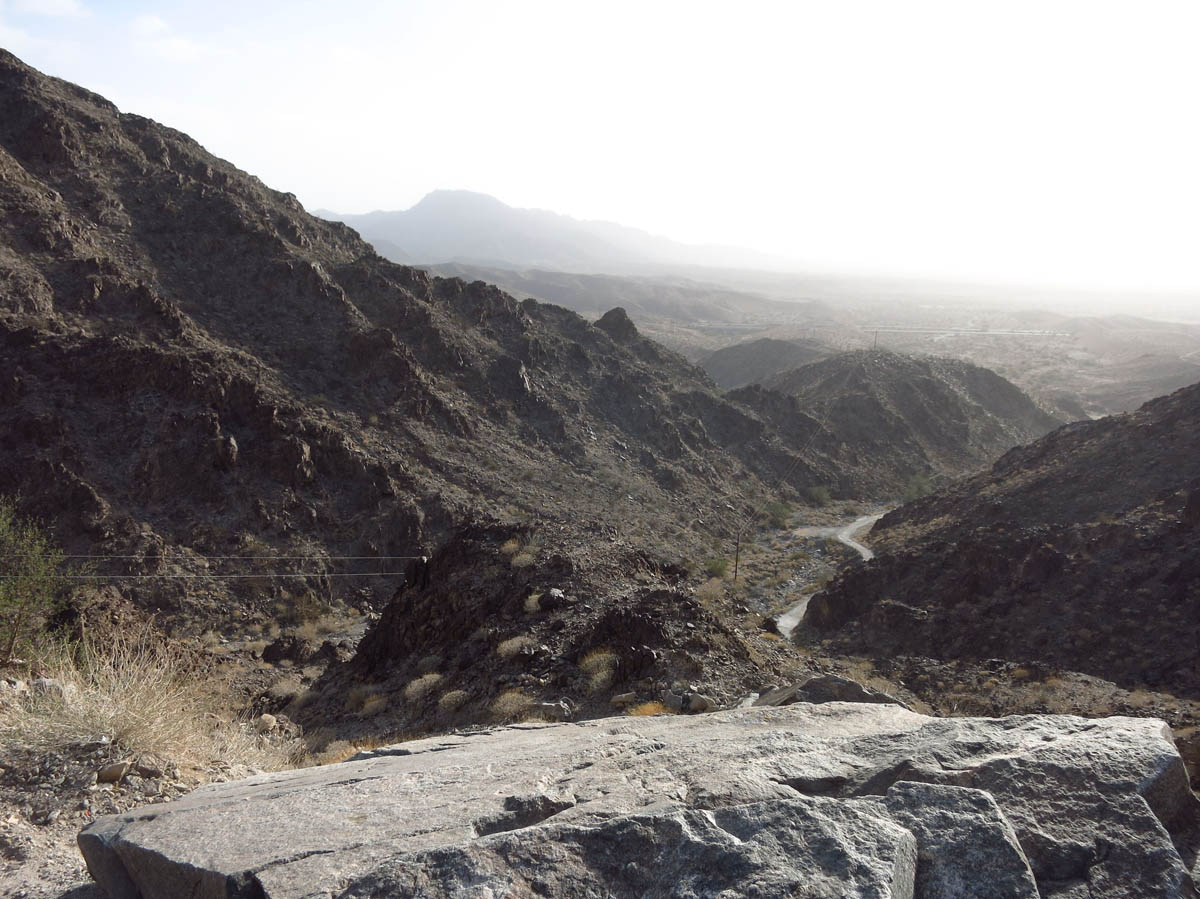 Looking east was clear, but west toward Yuma looked like Bagdad. 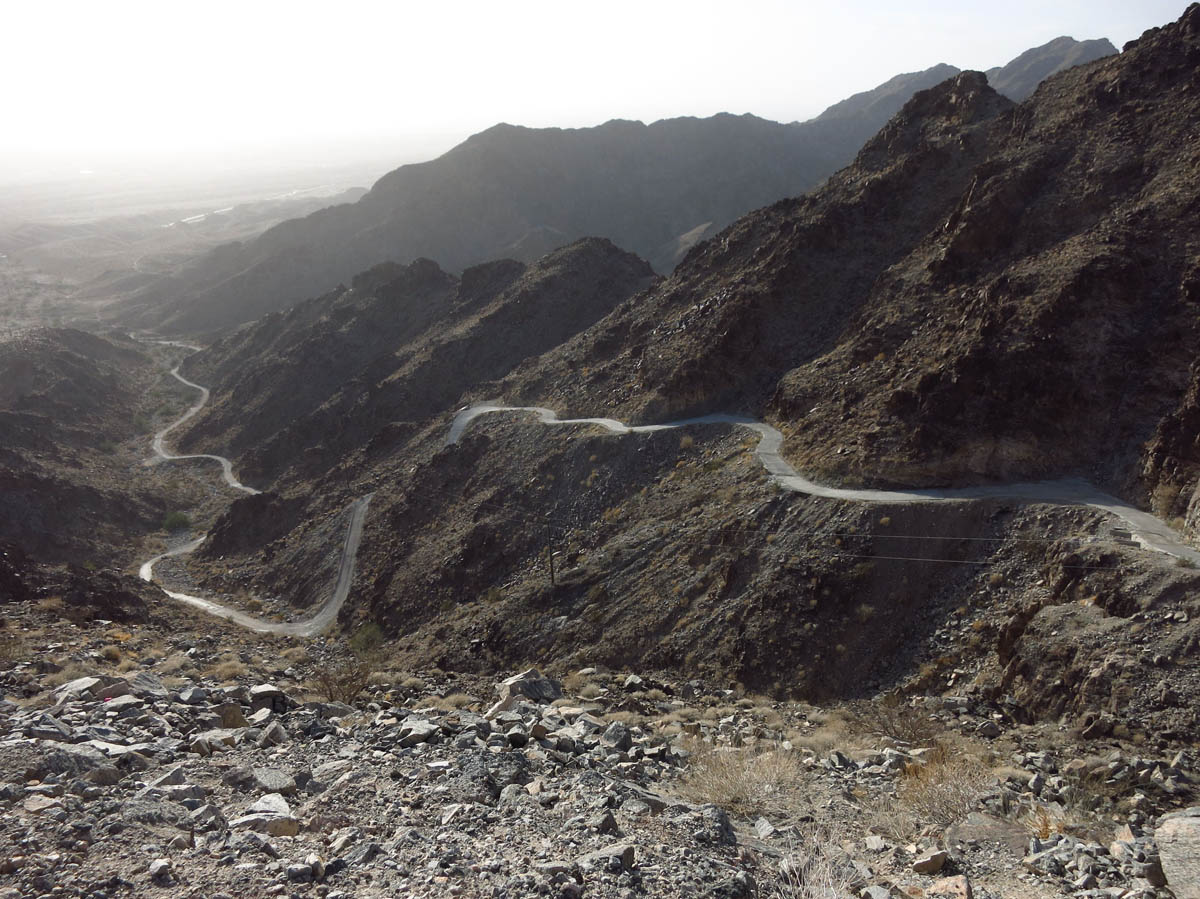 14 thoughts on “YuMa Be Right…YuMa Be Crazy”