First of all, thank everyone so much for their wonderfully comforting and kind comments to my “trying to get the feeling again” post.  That started out as just a rambling journal entry, trying to figure out how I “lost that loving feeling.” I figured after almost three months of silence, I would be playing to an empty room. But after your thoughtful words of support and encouragement, I am feeling a bit “verklempt.” It meant so much to me to know there are so many other more “seasoned” bloggers who have bouts with the same self-doubt. For me, writing comes from the heart, not the head. If the feeling is there, the words need to come out one way or another. If not, well then the “well is dry.”

Bear with me through a few rambling reflections on Quartzsite:

This was my first Quartzsite.   The jury is still out as to whether it will be my last.   It reminded me a bit of living in Manhattan in my 40’s.   The city was made up of dozens of demographics, yet I couldn’t seem to find a group of people where I fit.   The city dwellers were all in their 20’s, trying to emulate the characters from Sex in the City, sipping Cosmos in slinky black dresses.  Those in their 30’s were busy pushing baby strollers up the East Side, shoving the rest of us off the sidewalk as if the chariots holding their little bundles of joy were bulldozers.   Older, more establishment types were doing the “bridge and tunnel” commute, bulging out of the PATH train at precisely 8:59am, then evacuating the city like a ghost town at the first stroke of a respectable end to the workday.   So where were the “people like me?”

Finally, one day I stumbled upon the True North Sailing Club, signed up for sailing lessons, and instantly found “my tribe.”   Membership was represented by all demographics, yet it didn’t matter.   We were there for the love of sailing.

I think that is what I expected to get from Quartzsite…almost a million attendees, all drawn together by the love of RVing.  But I didn’t feel it.  I completely get that it’s not feasible with a crowd this big, but I had a hard time pigeon-holing myself. I didn’t really feel like I fit into any of the “tribes.”  There were the Canadians, the dog owners, the ATVers, the Boomers, the Rubber Trampers, the Xcapers.  But where were the “Hikers with a Peter Pan Complex?”

Like so much of our society today, it feels like the special interest groups have segregated us.   With the advent of new groups like the Xcapers, tribes get more specialized, and as they define their demographic, it can feel more exclusionary than welcoming.   A “working age” group?  Yes, I am “working age,” but I no longer want to think about work.

Certainly, I enjoyed meeting fellow View/Navion Owners, but again, we seem to form into “sub groups.”  As I struggle to find my “tribe,” I see that is part of the problem.  People are people, yet in our struggle to “belong,” we isolate.   There were friends I wanted to see at Quartzsite, yet the segregation between Boomers, Xcapers, brands and badges was too difficult for me to transcend.   Instead, I withdrew.

I think back to that sense of belonging I felt in that Manhattan sailing club.  It changed my life completely.  Yes, there were still 20 somethings in the group, as well as retired sailors in their 70’s.  But we were brought together by our love of sailing.  It didn’t matter how old, where we worked, where we were from.  We hung together in kinship.

So it makes me wonder as I look across the desert at so many RVs out there, the ground scattered with fiberglass as white as a freak snowfall.  Where is my tribe?  Why do I not feel that same sense of belonging and camaraderie among those who have a love for RVing like I did among the sailing community?  The sport itself was engaging enough that there was not time to discuss whether you were a single-hander or sailed with a crew.  We didn’t drop the mainsheet to stand up and cheer when another boat flying the Canadian flag sailed by.  We didn’t anchor over by the Beneteaus, or raft up with the Catalinas.  We focused on harnessing nature to make the boat sail as skillfully as possible.  Sharing the thrill and skill of mind body coordination.  There was no segregation. We weren’t single, female, Native Texan, “working age” sailors.  We were just sailors…I miss that. 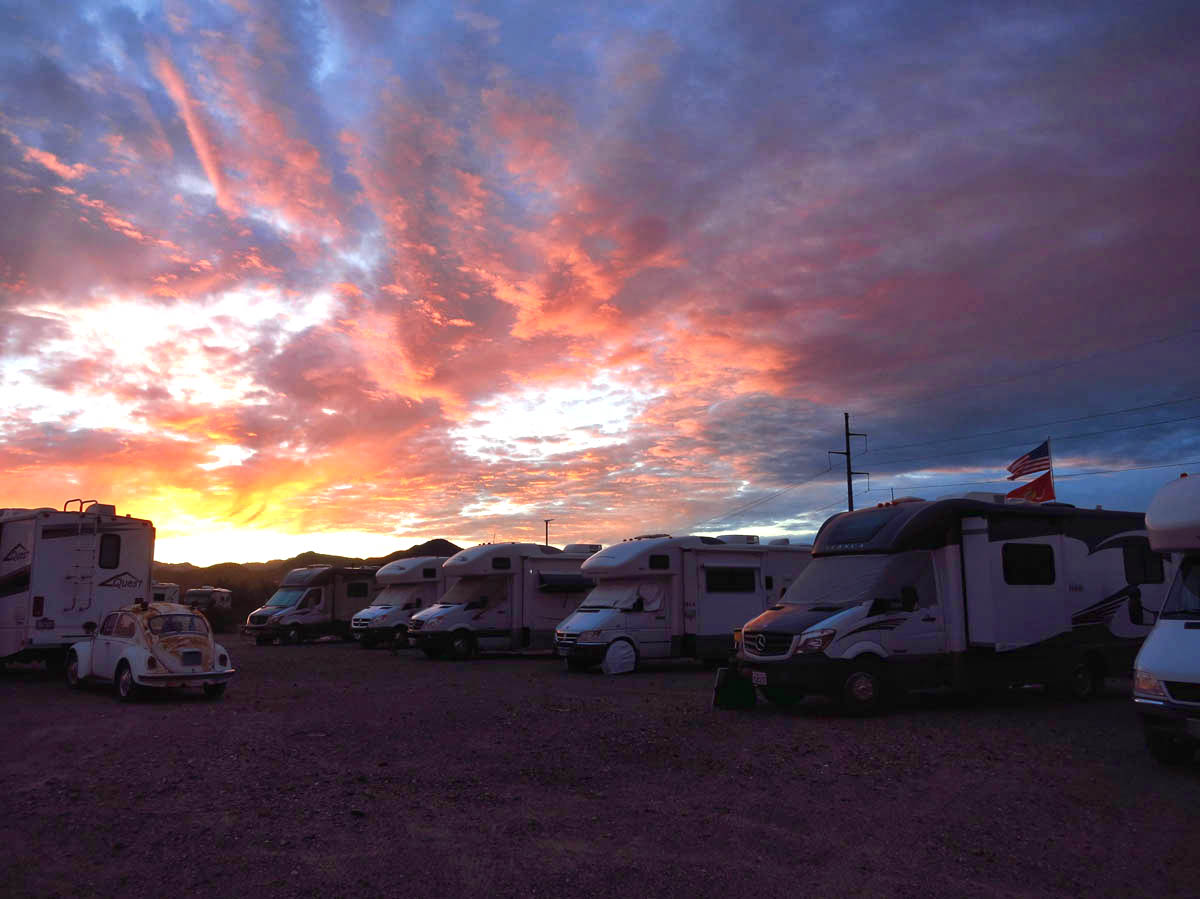 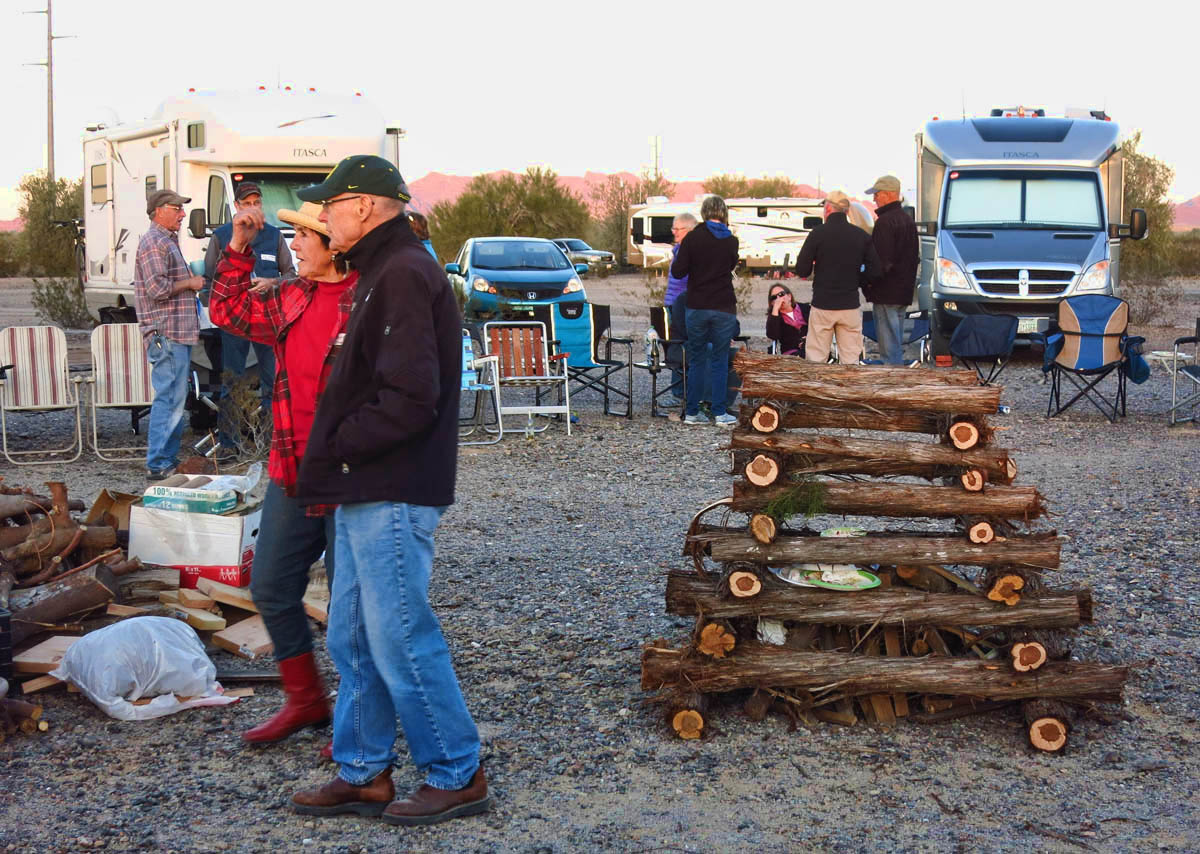 This may not exactly be “Burning Man”… 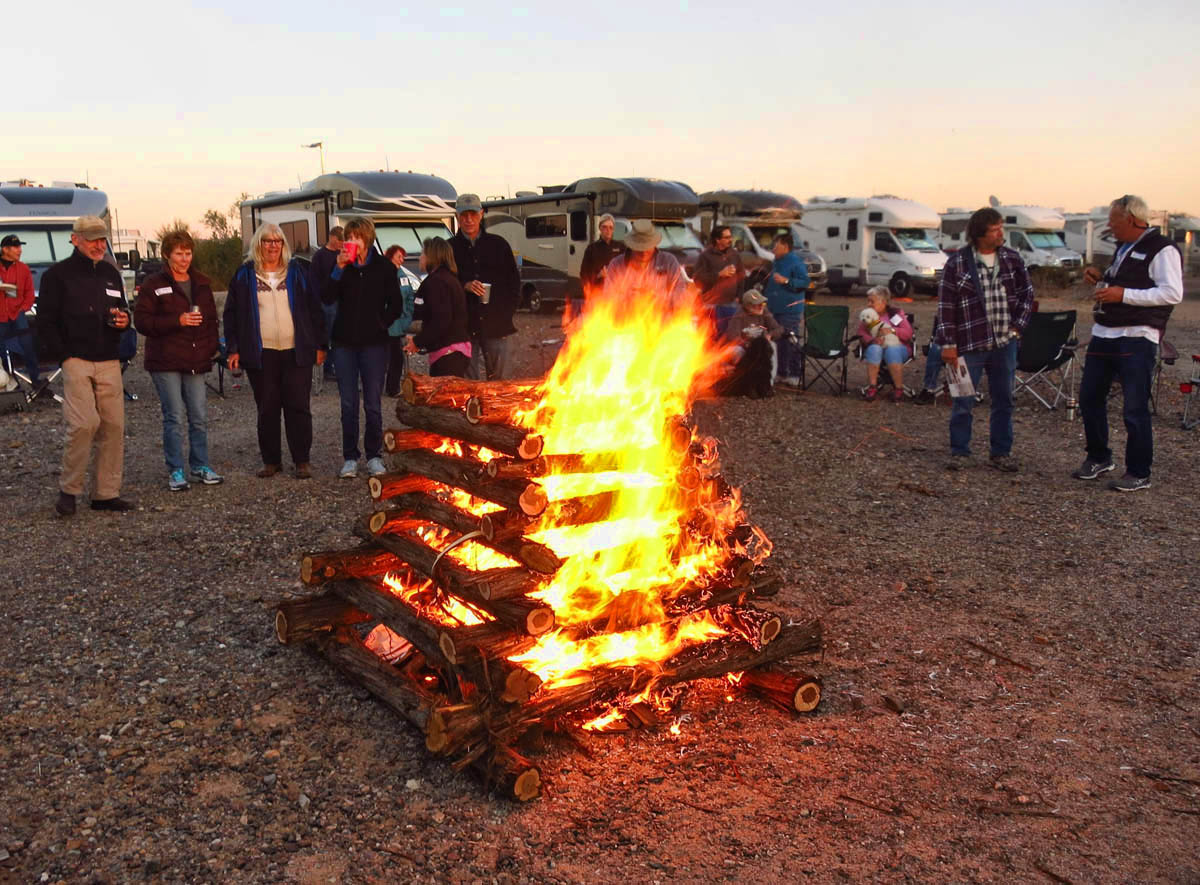 But we still had one heck of a “burn!” 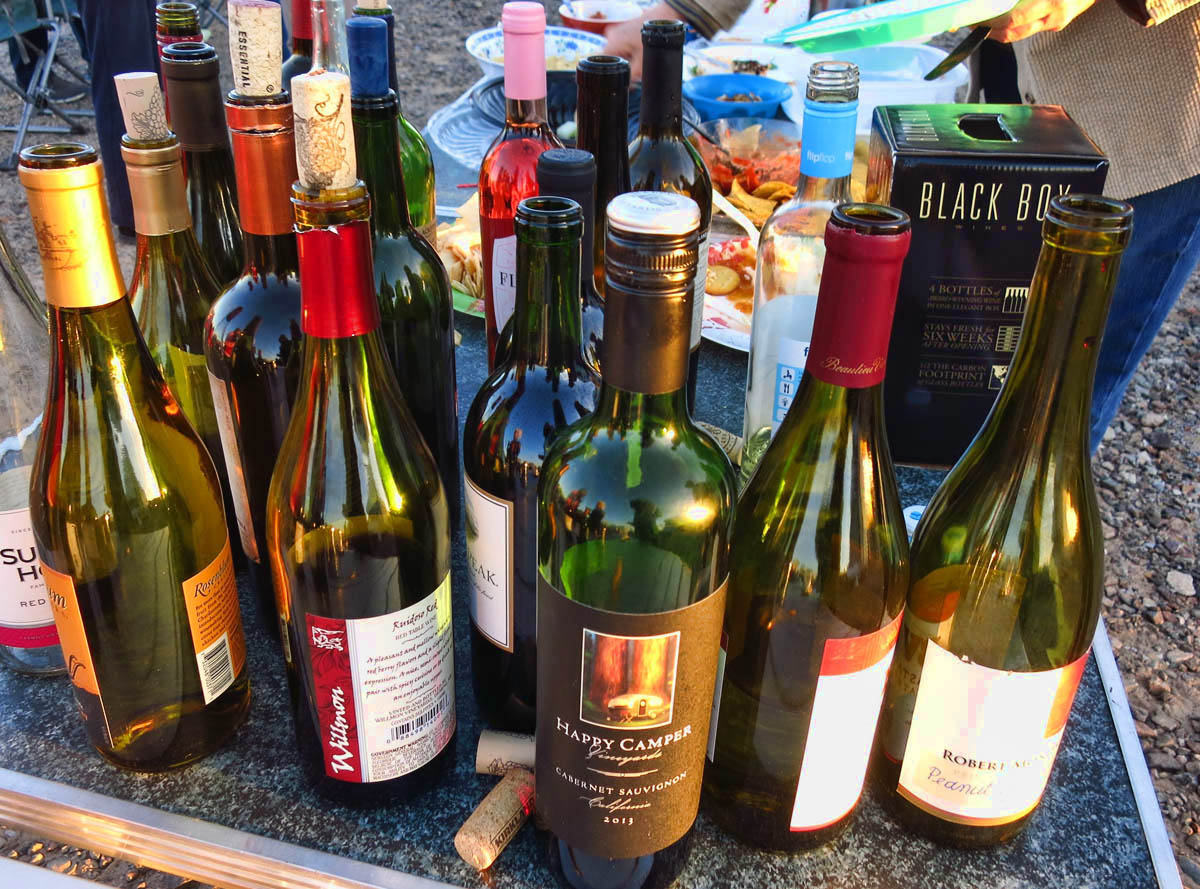 Wine Night at the View/Navion rally. Note the label on the center bottle, “Happy Camper!” 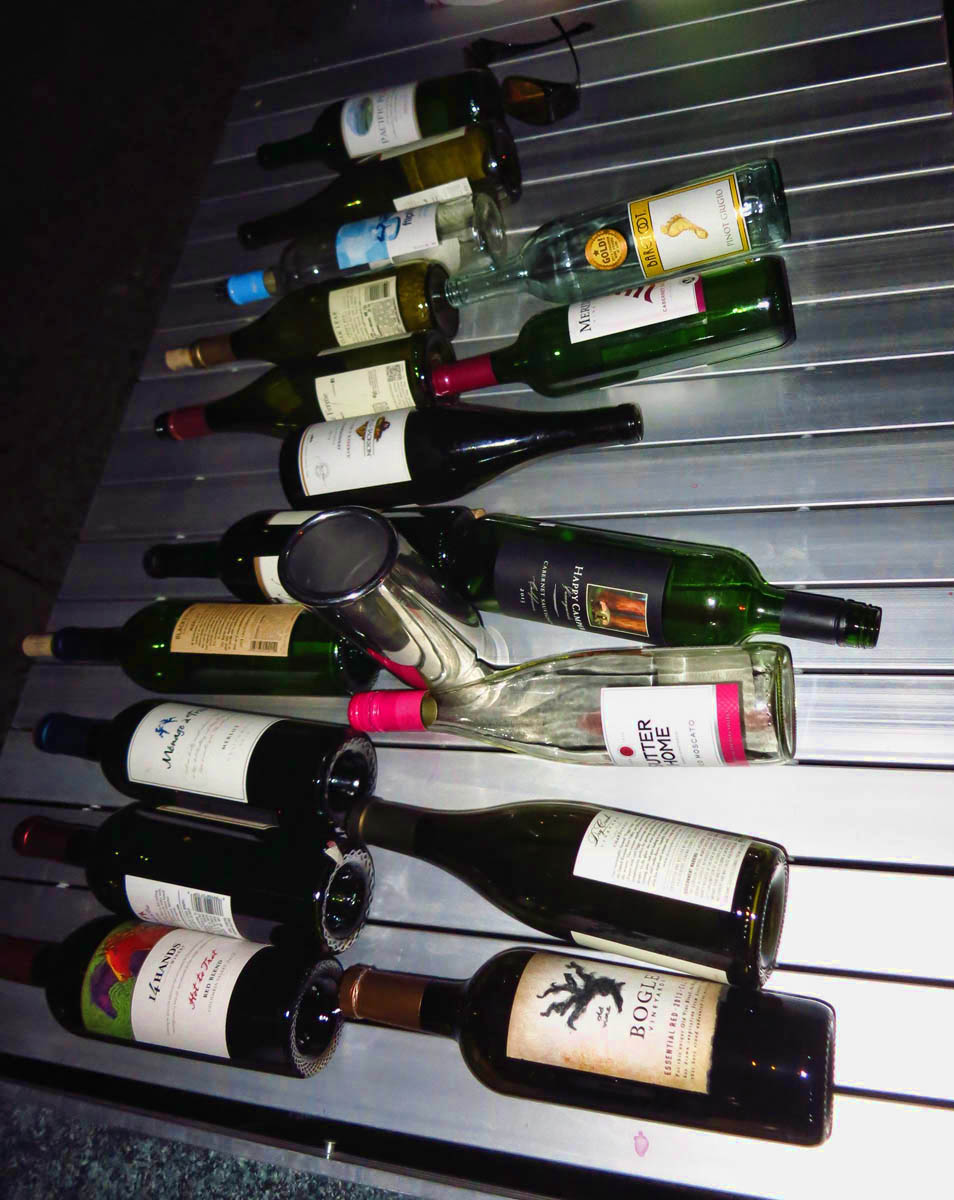 We had a respectable finish! 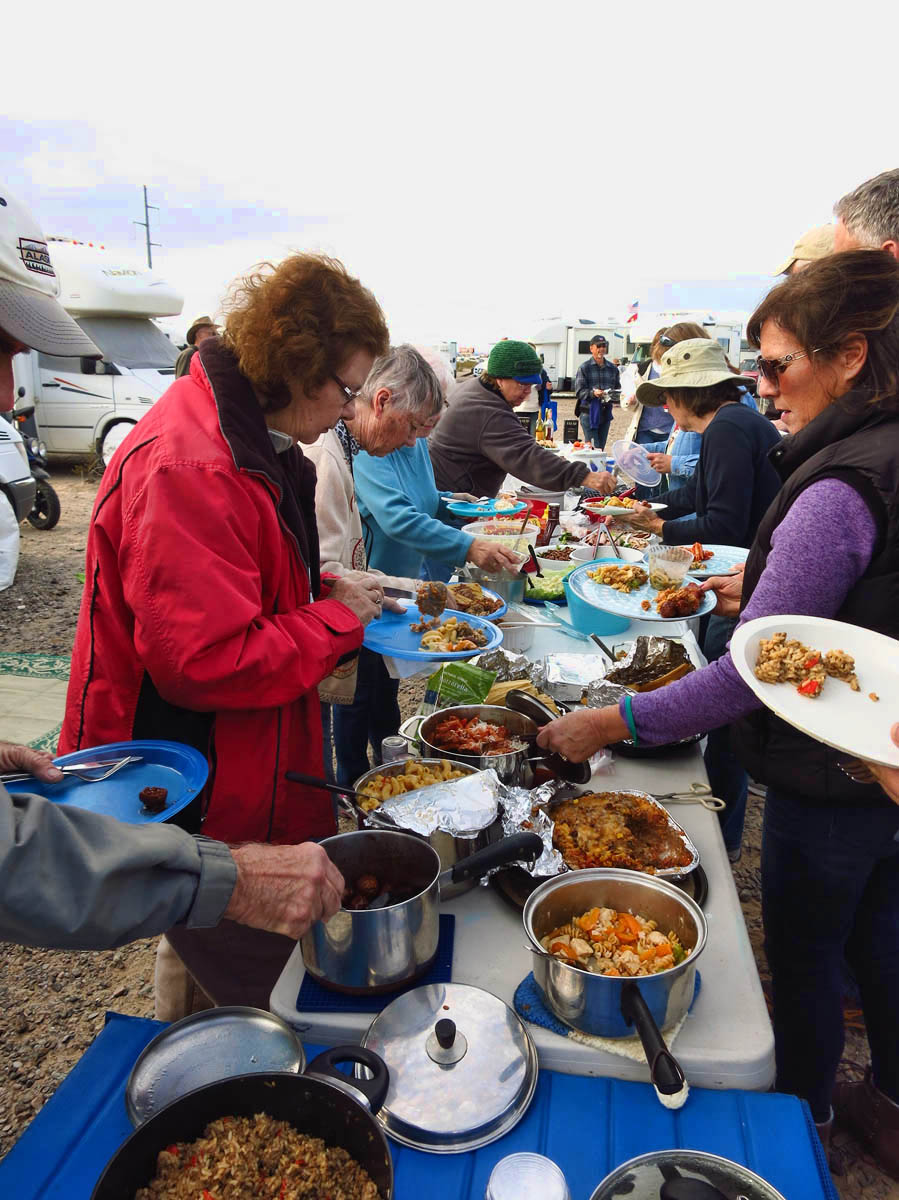 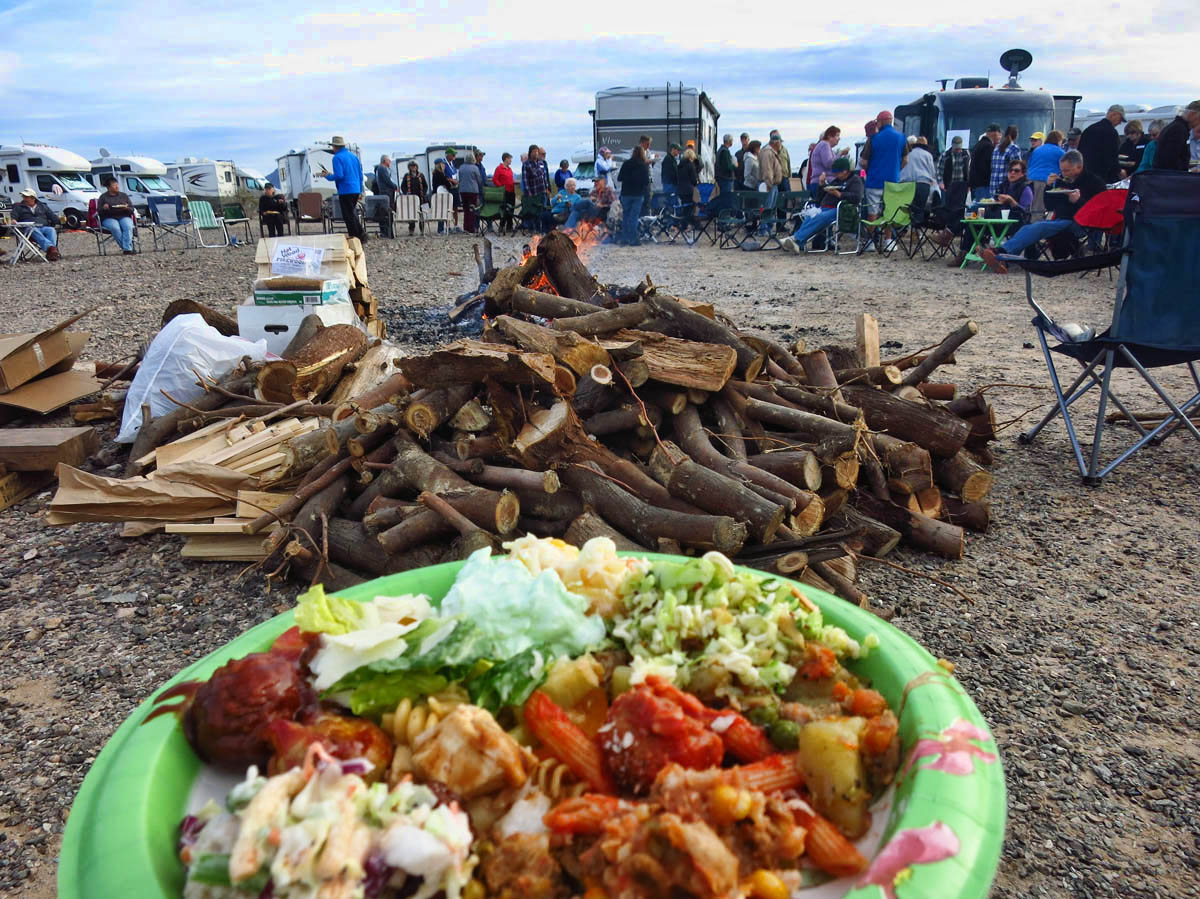 …making it impossible to be “skinny!” 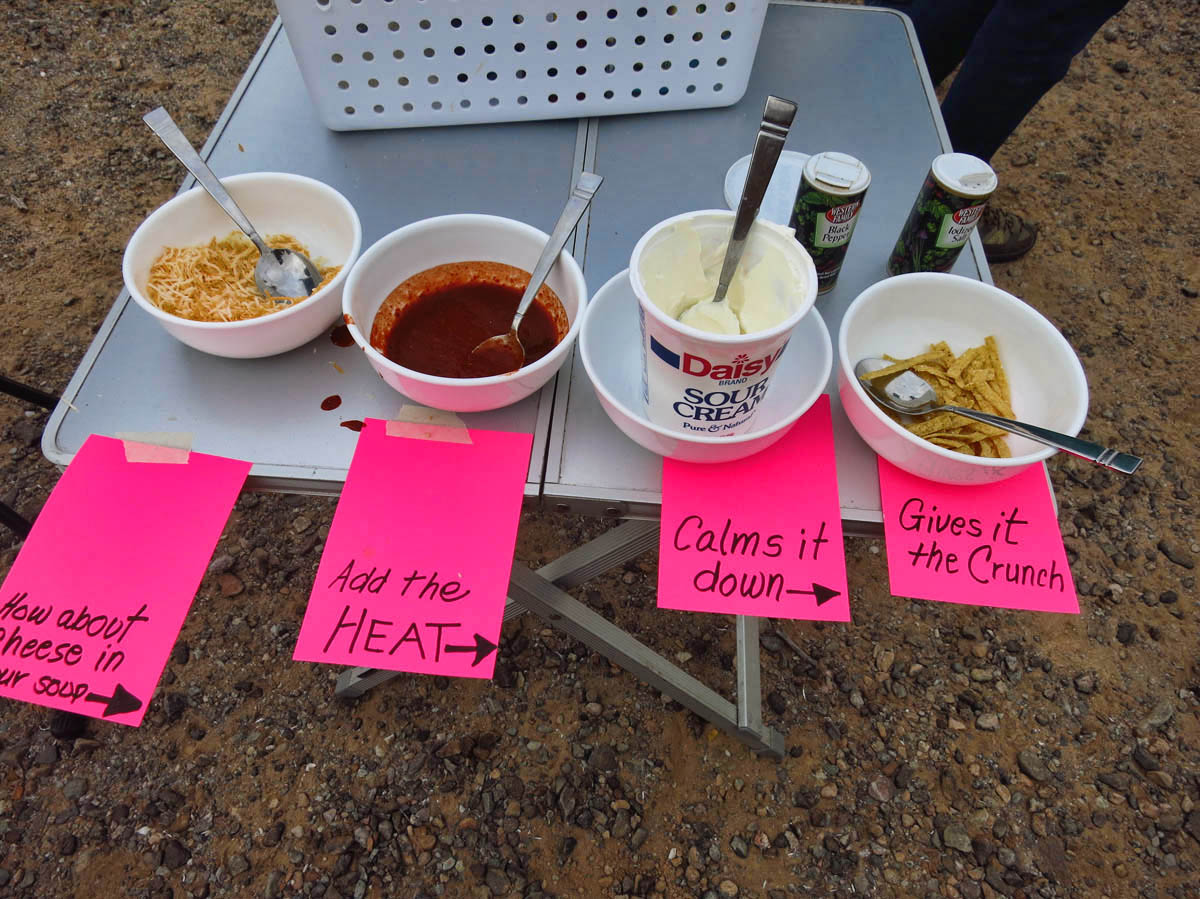 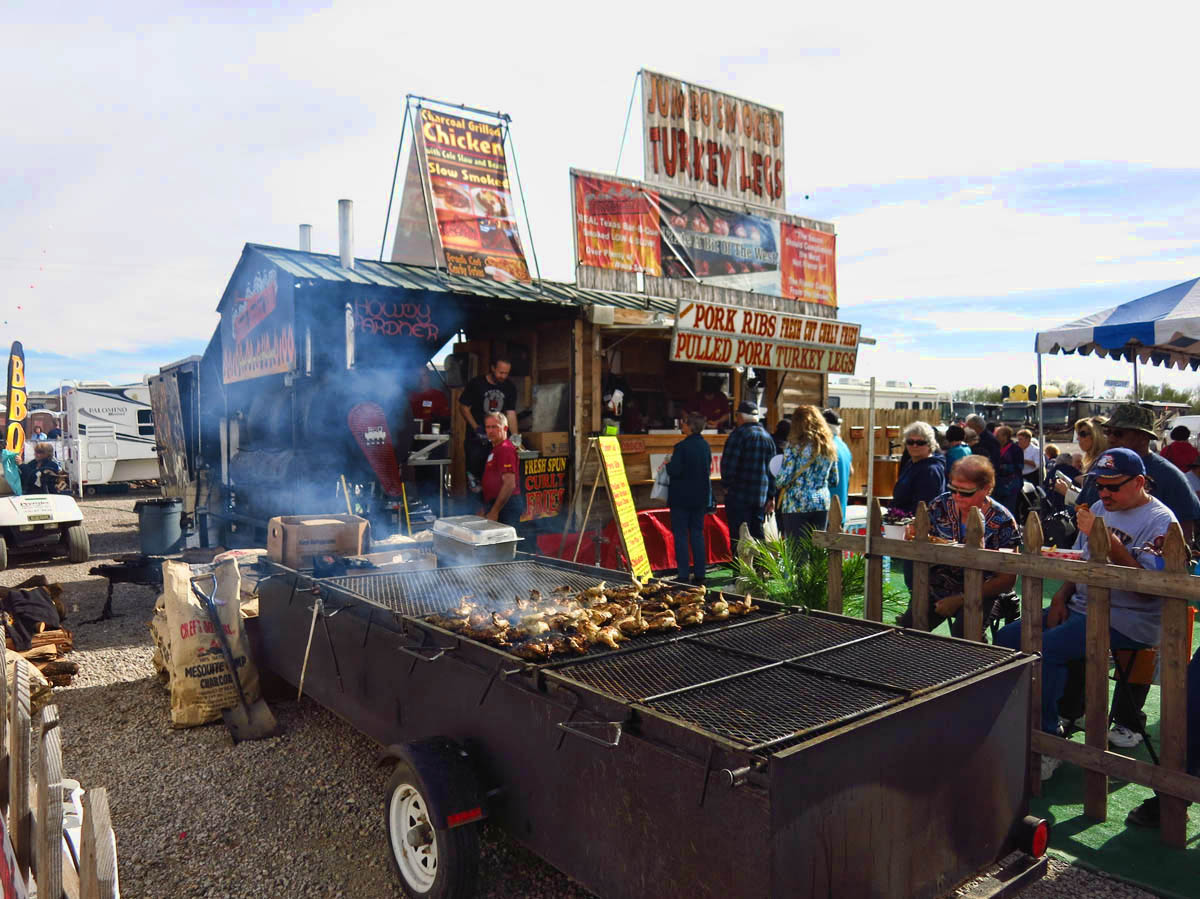 “State Fair” food was tempting, but at $8 for a hotdog, $7 for onion rings, and $10 for a double scoop of homemade ice cream, one could lose their appetite fast! 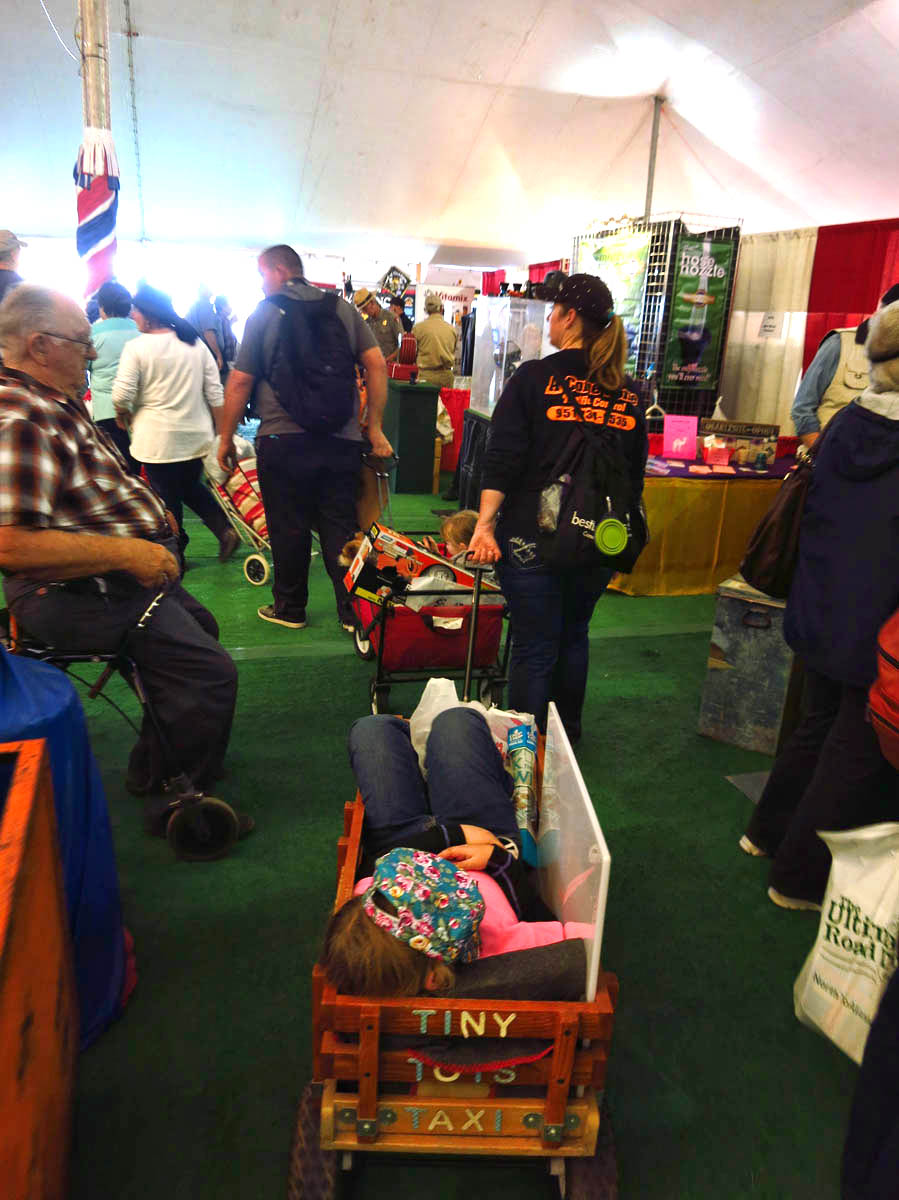 Note big kids in wagons — one playing games on a tablet, the other trying to nap. I think the rule in a crowded tent like “Q” should be “One wagon per family.” 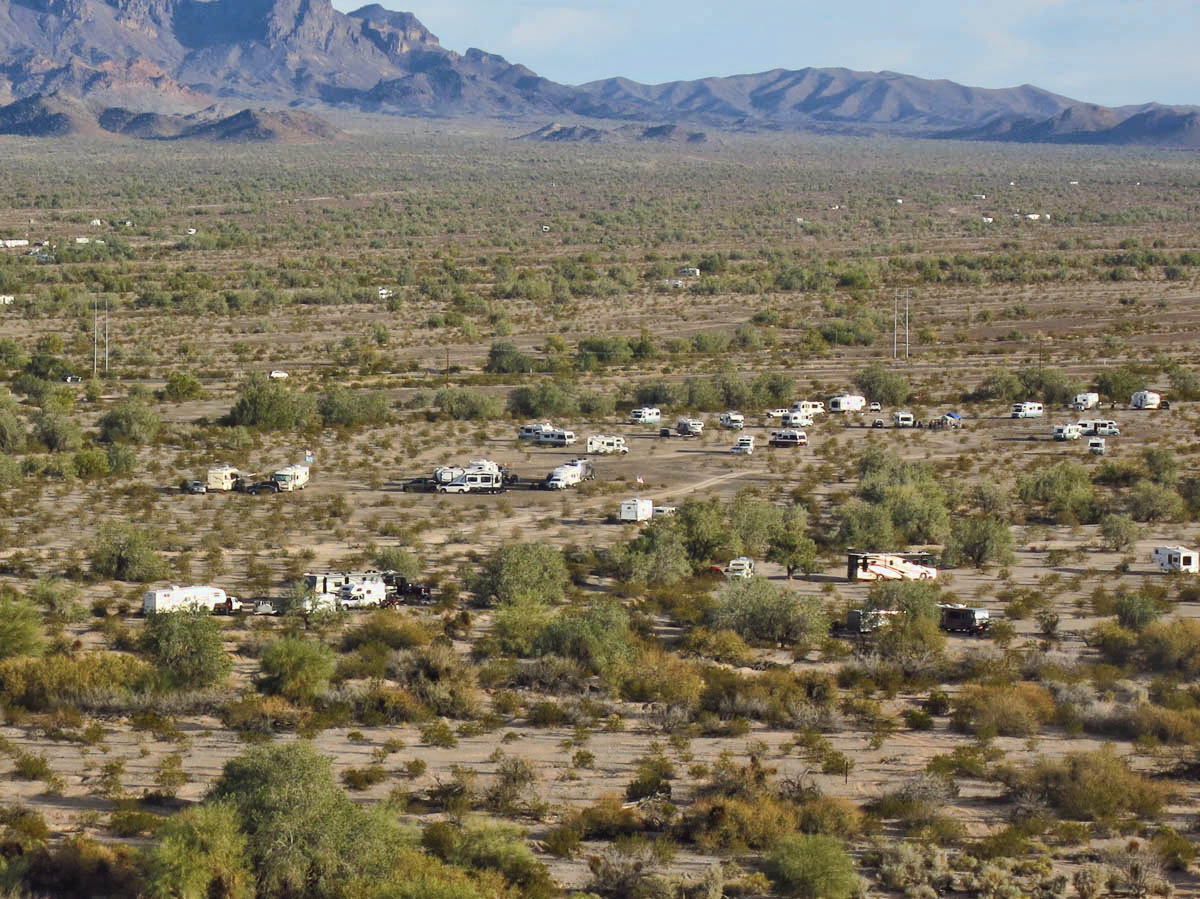 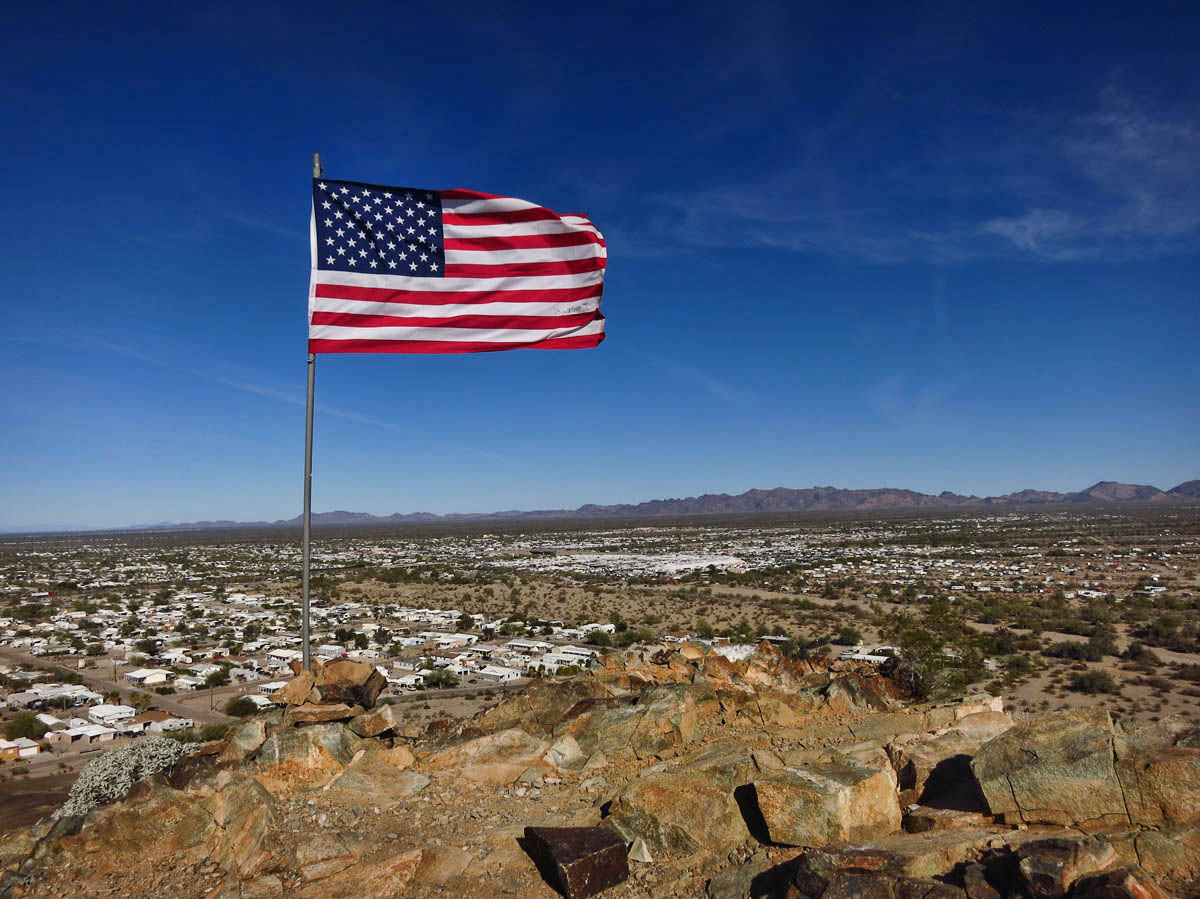 View from atop “Q Mountain.” Guess it goes without saying it was windy in the desert.

23 thoughts on “The Culling of Quartzsite”