I talked earlier about the “Firefly Effect,” meeting a fellow traveler who seems to “light up” when you meet them, and if you stop and share a conversation, they usually have some wisdom to impart.  Such was the nature of the effect in Todos Santos.  The unfortunate lack of wifi in my room in Hotel Gulguarte had me sitting in the courtyard, plugged in next to the laundromat, when a 50-something “surfer dude” leans over the railing and shouts down from the second floor, “What does a guy need to do to get wifi around here?”  My response, “Come down to the laundry pit.  It’s the only place it works.”

Joe is a free spirited surfer from Kelowna, British Columbia, who spends summers washing windows in Kelowna, and winters surfing in Baja.  We talk for hours about everything from 9/11 conspiracies, to how he gets a date in “surf camp” by charming the ladies with his chicken stir-fry.  He is a fascinating person who has opted to live life to his own tune. 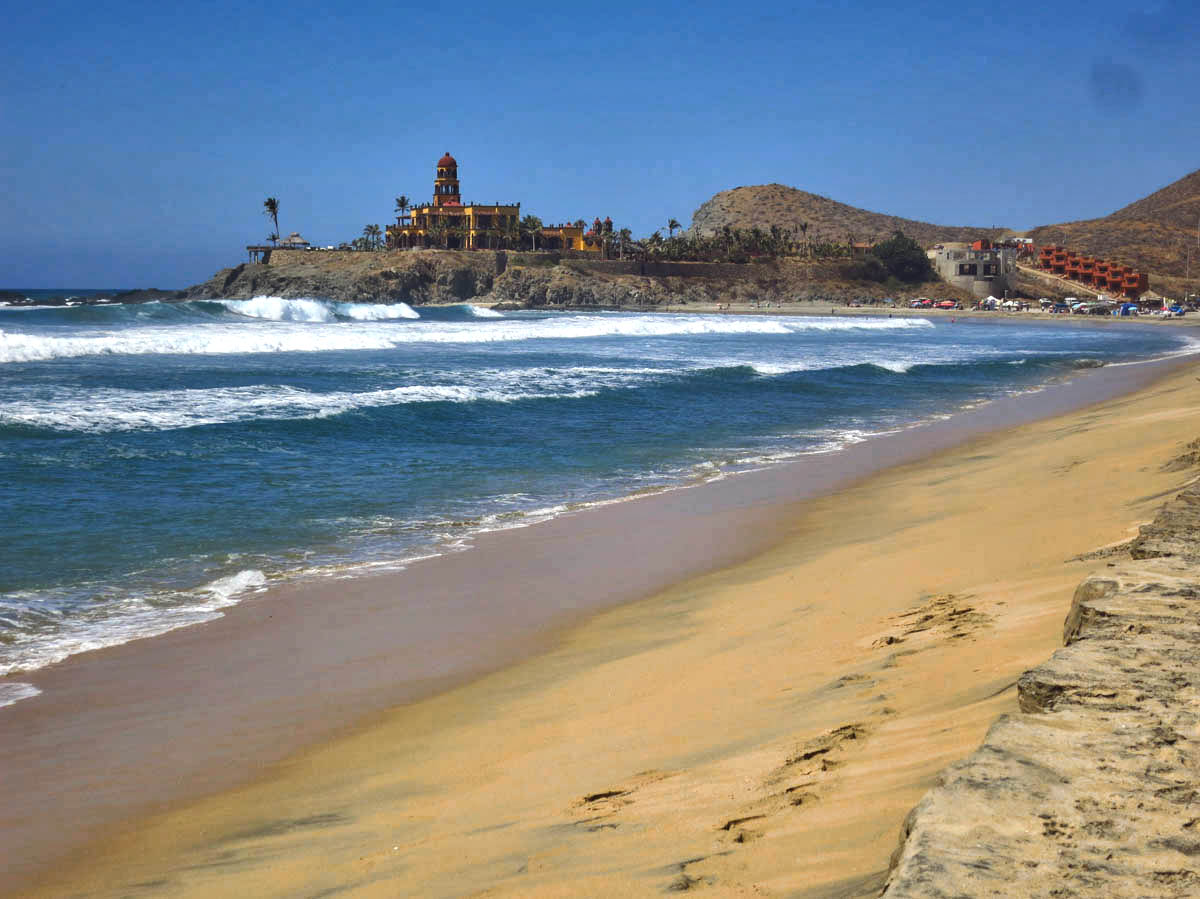 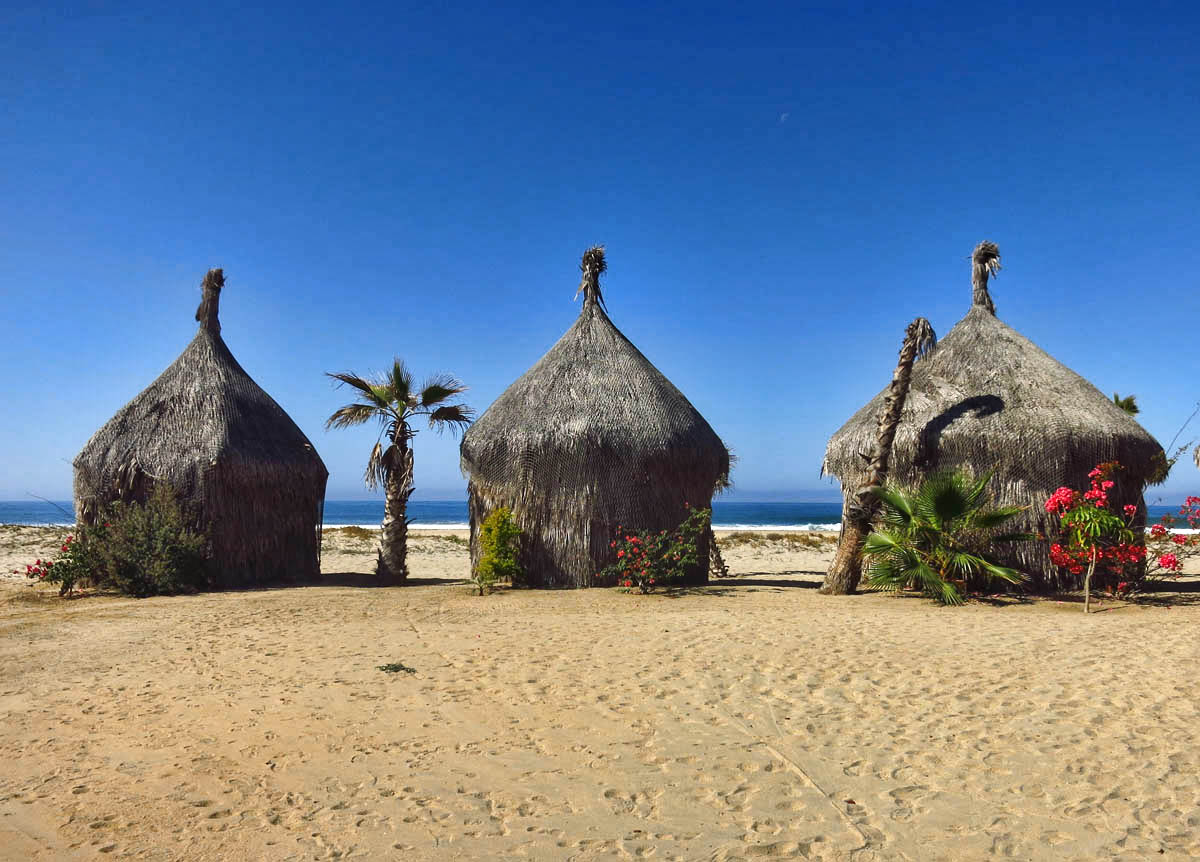 Joe plops down beside me, cross-legged, and we share passcodes, apps and maps.  I can’t help but blush as I stare at his legs.  He has the most beautiful legs of any man I have seen.  He rides his bike the 10 miles to the beach, then surfs all day.  I try to avert my eyes.  😉 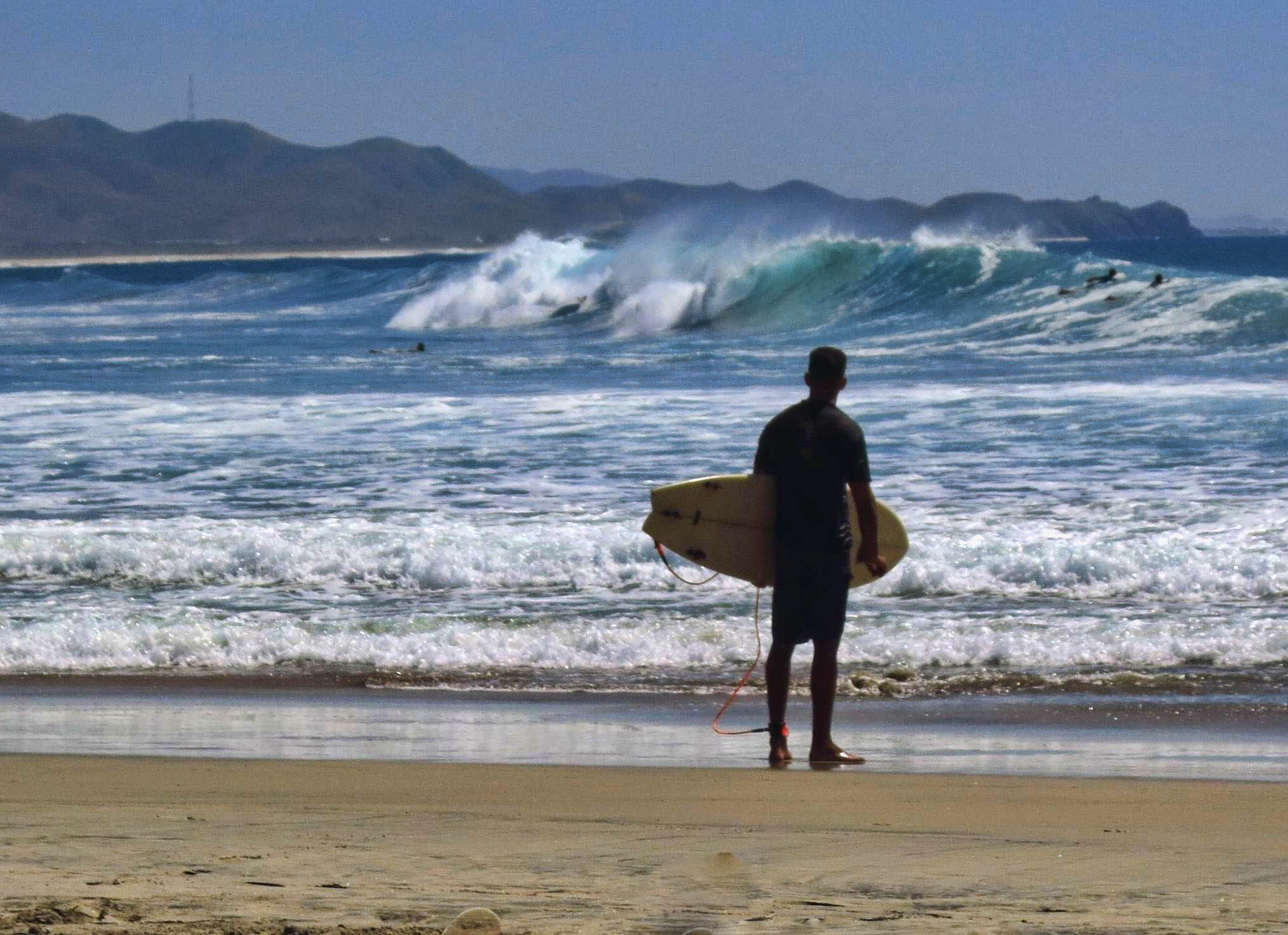 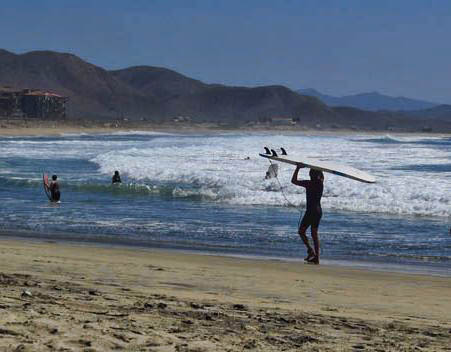 Since I crossed the border into Baja, I have been looking for a place to swim.  It seems the water has either been too rough, too cold, or the winds too high.  The western side is known for its rip currents, undertows, and steep drop-offs, but Joe tells me how to get to a beach where I can swim.  “If you stick close to the headland,” he tells me, “you’ll be safe. I explain that I don’t have a car, but no problem, he says! The Aguila bus will drop me there!  “Tell the driver you want off at the Artisinal shop.  You’ll know it by the Real Estate sign that says ‘Se Vende.’  He’ll try to drop you off at the resort.” (making the money sign by rubbing his thumb and index finger together.)  “But don’t let ‘em.  Tell him you want off at the Se Vende sign.  Catch a ride to the beach.  If you are walking on that road more than 10 minutes, it’s cause you wanna be.   That’s the kind of community we are.” 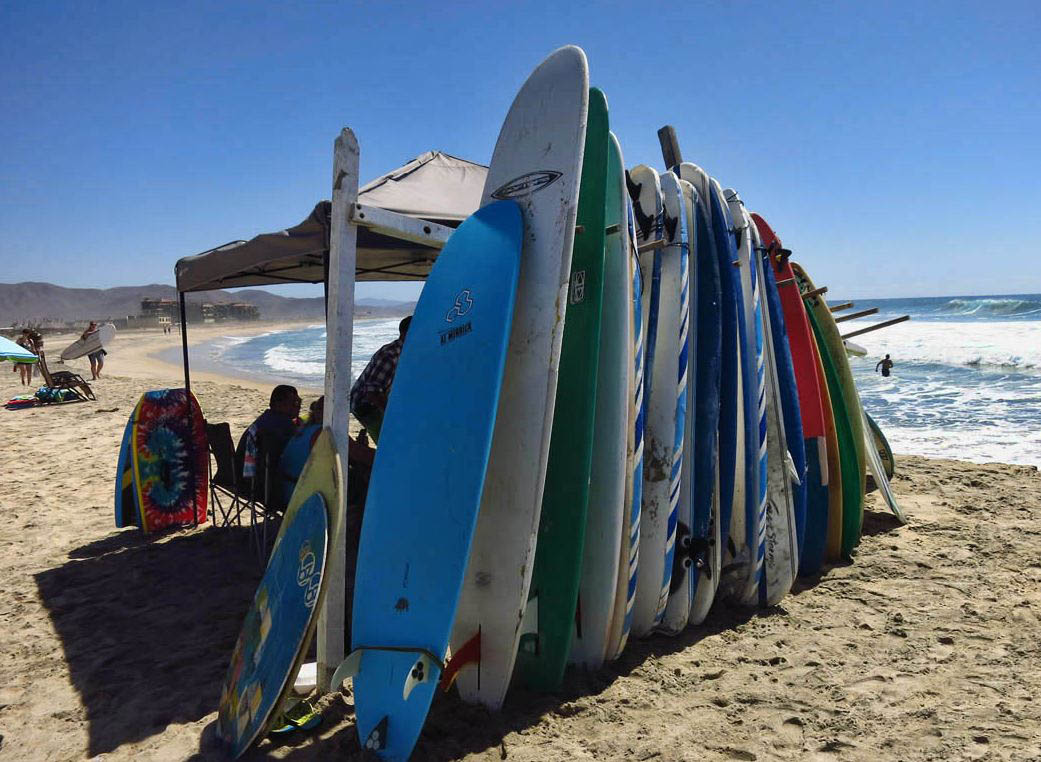 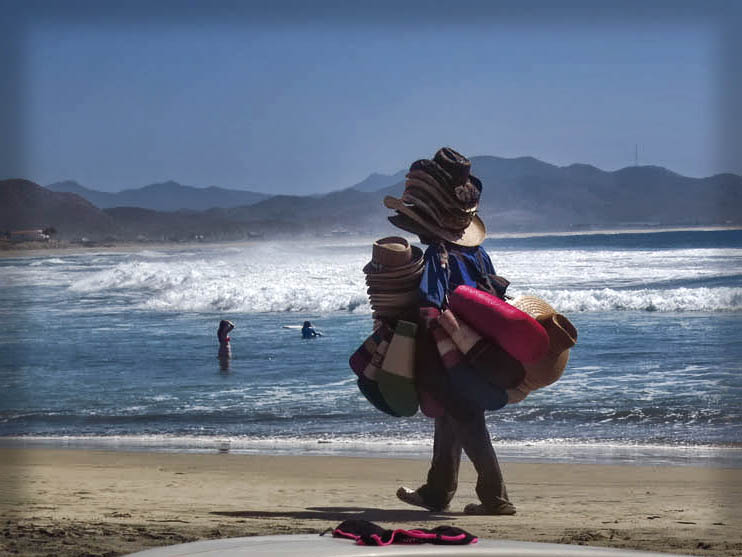 After a stop at my favorite coffee shop, Caffe Todos Santos, for a latte and a muffin to go, I am on the 10:00am bus bound for the beach.  It’s a gorgeous day, so I want to be sure I get to stay awhile if it is as nice as Joe says.   The bus drops me along the highway as requested.  It’s still early enough to be cool, so I walk the 1 mile dusty road to the beach. 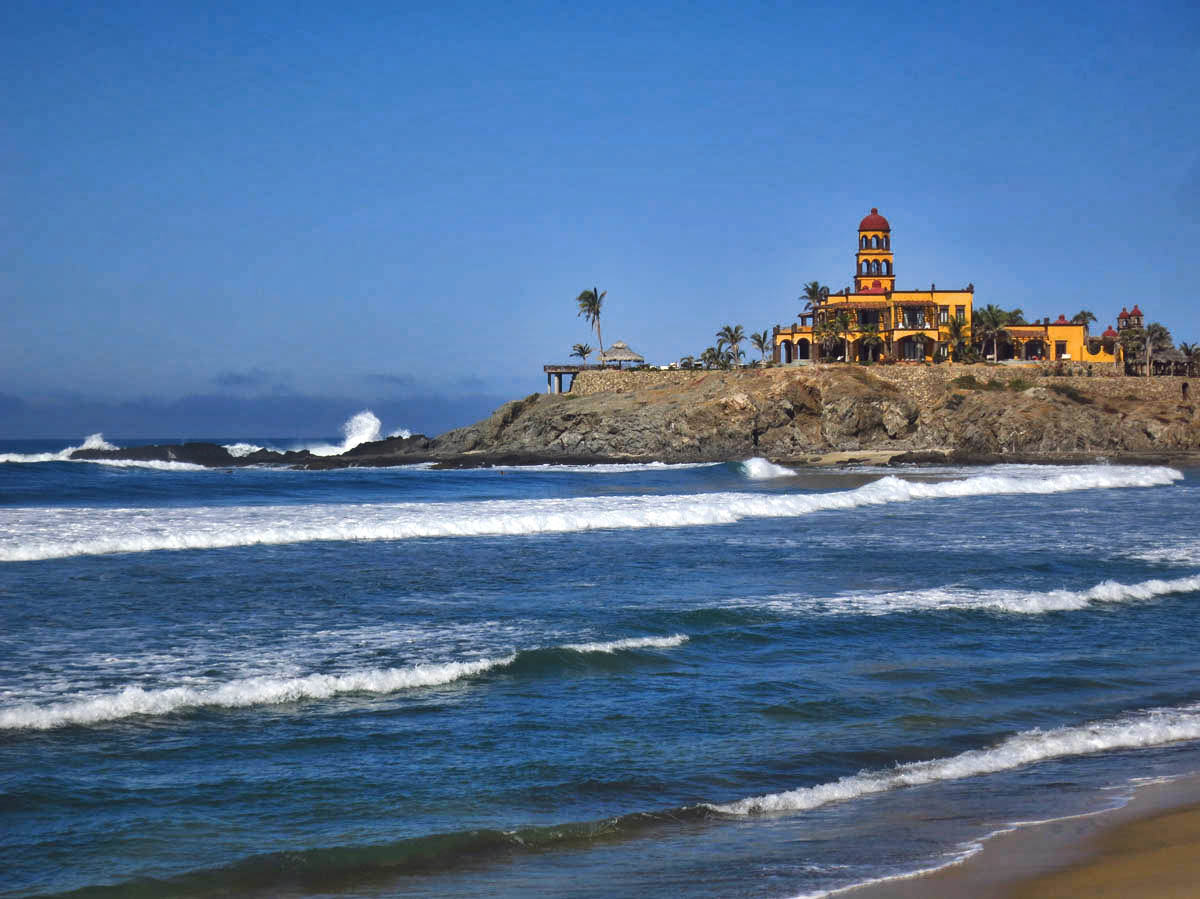 We, the “Great Unwashed” are not allowed to visit this monstrosity.

At first glimpse, the surf looks rough.  The waves are curling and crashing, and I see only surfers, not swimmers.  But just as Joe said, I continue on down to the headland to park my chair, where I see other swimmers out in the water.  I suspect the water temperature will be too cold, but while it is bracing at first, once past the initial shock, it is perfect. 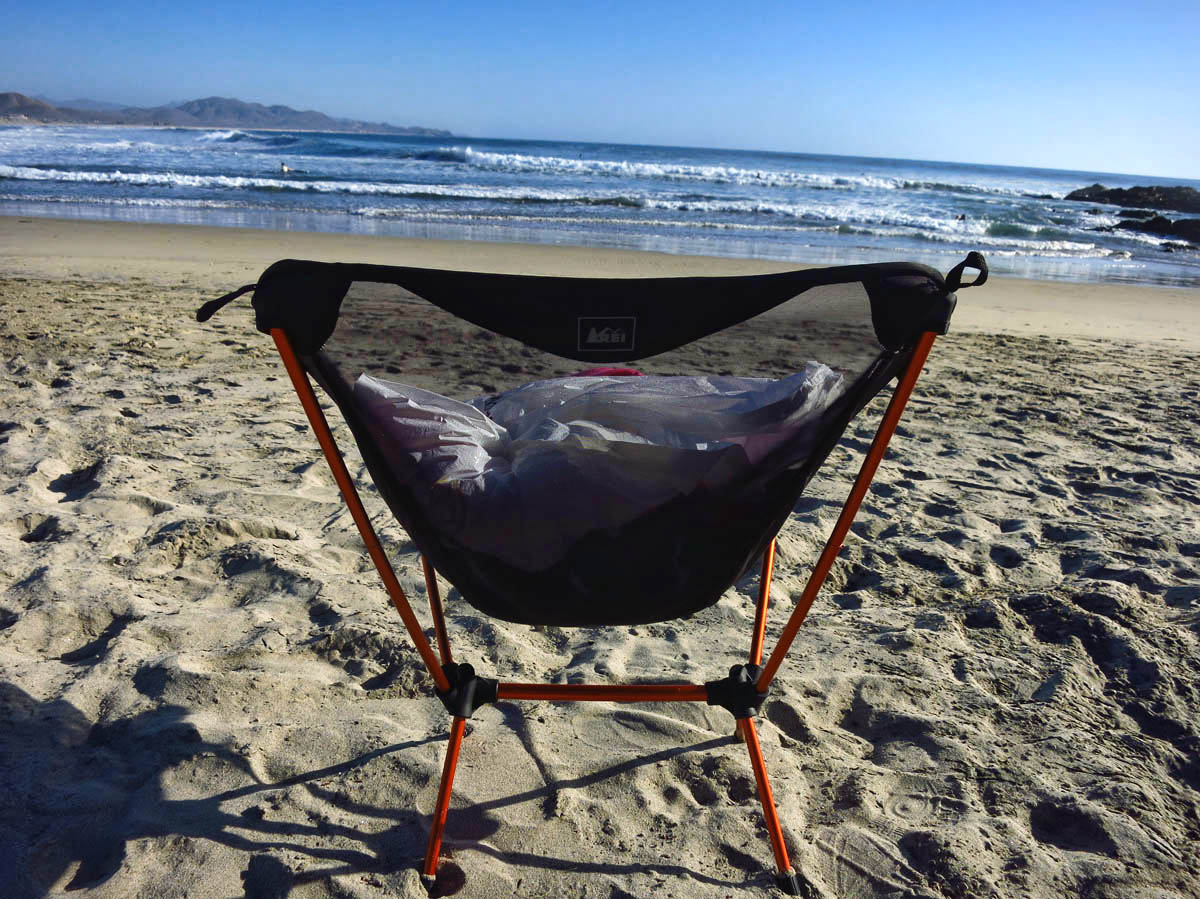 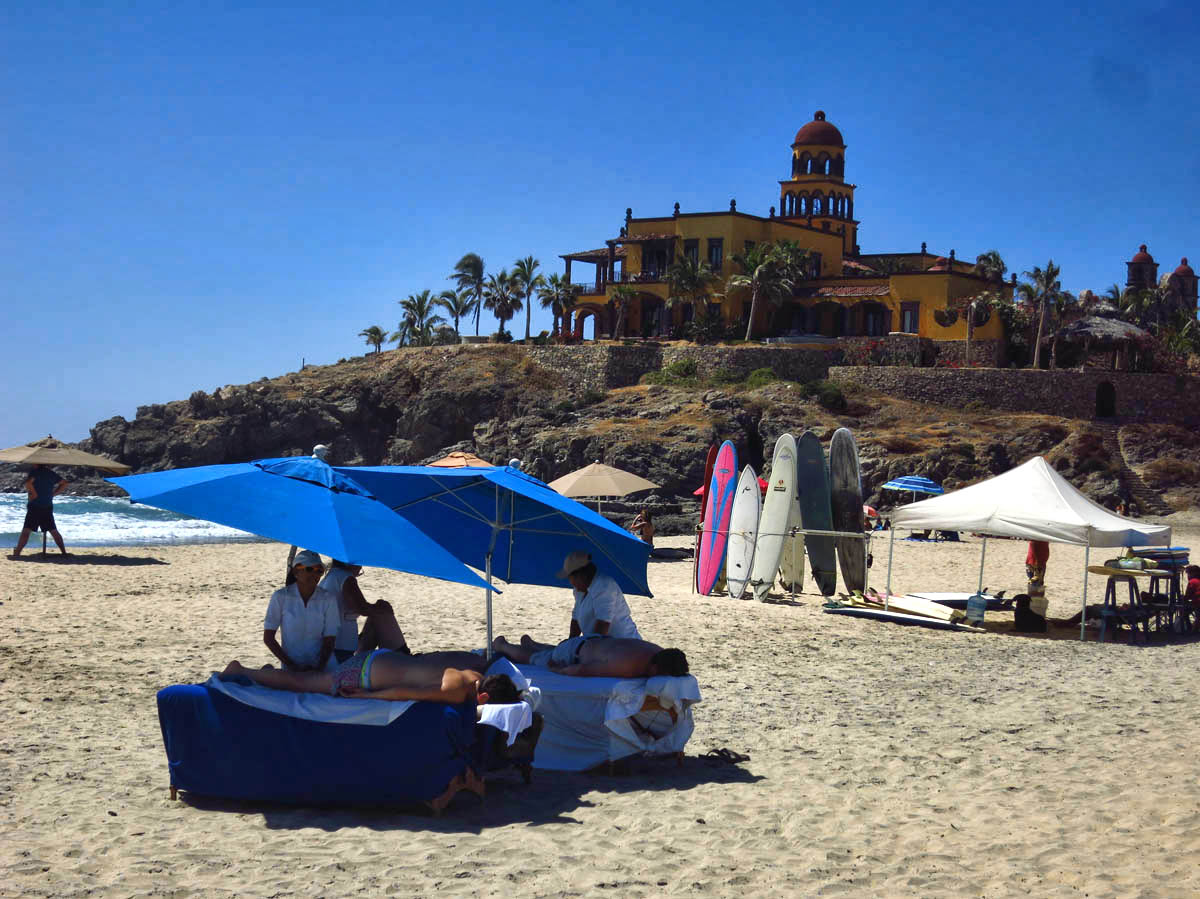 I sit in my chair for most of the day, listening to this “community” lingo. Just as Joe says, there is a camaraderie among the surfers that I envy, as they congratulate each other and talk surf strategy.  Their conversation  reminds me of the lyrics from the Beach Boys, “…paddle out, turn around and raise, and baby that’s all there is to the coastline craze. You gotta catch a wave and you’re sittin’ on top of the world!”

I later learn Playa de Cerritos is a “point break,” where the land juts out, causing the wave to fall over on itself in the perfect curl, which makes it so popular among the surfing community. I think back my teen years, my “Endless Summer” blacklight poster worshiped on the wall behind my candle-lined turntable like an altar, and remember how I was such a “surfer wannabe.”  My parents even rented me a board at South Padre once, but I never got the balance thing down.  Still, I feel the effects in my stomach as I watch them dip, flip, and ride that quintessential curl all the way in to the beach.  Pumped with adrenalin, they run back up to the headland, paddle out, and do it all over again. 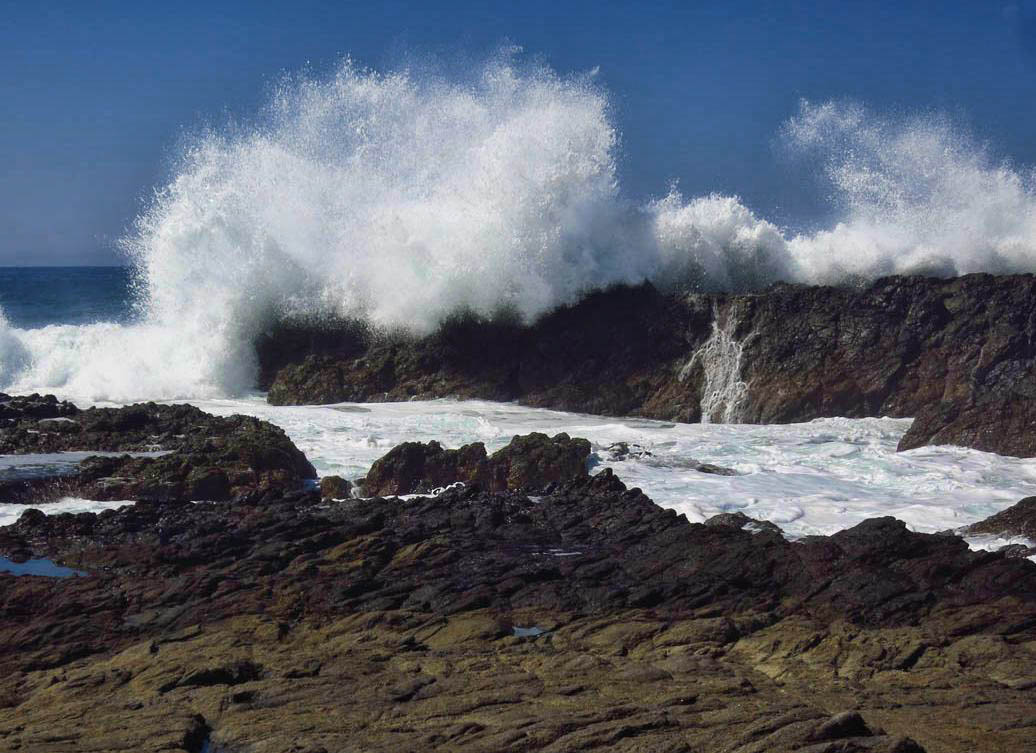 There is a trail that goes around the headlands… 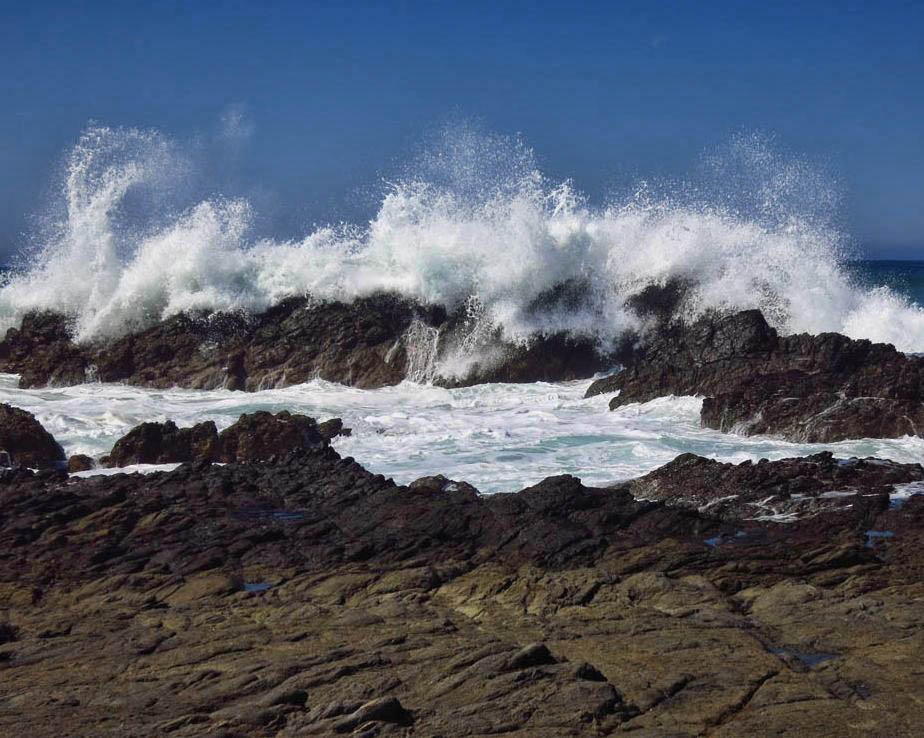 The waves are thunderous.

All beaches in Mexico are public, so vendors are present but not persistent.  Soon “Sophia” strolls by asking if I am interested in “massaje.”  On the beach.  Twenty bucks for one hour.  SOLD!    I move my things up to the massage table shaded by an umbrella, drop the straps on my swimsuit, and let Sophia work her magic on my shoulders and back, achy from the beasts of burden.  I can’t believe an hour goes by so quickly, laying there listening to the roar of the surf and a little light jazz, interrupted only by the occasional whirr of the blender coming from the nearby beach café. 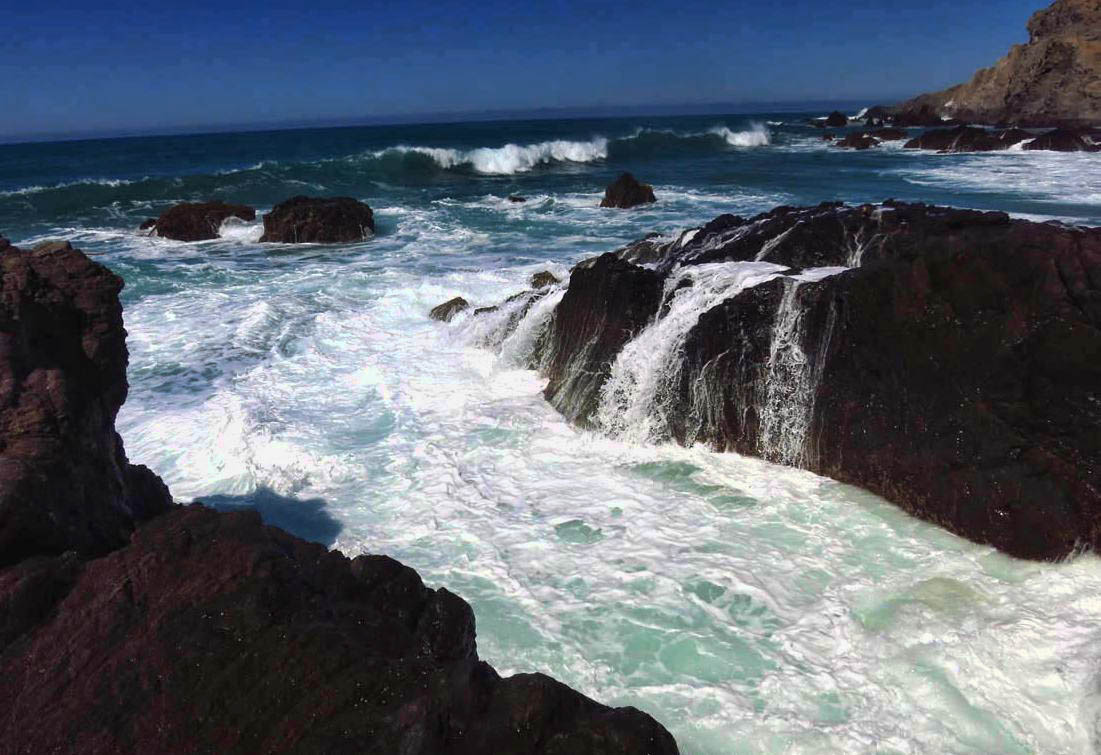 The headlands trail ends here! No way to cross. 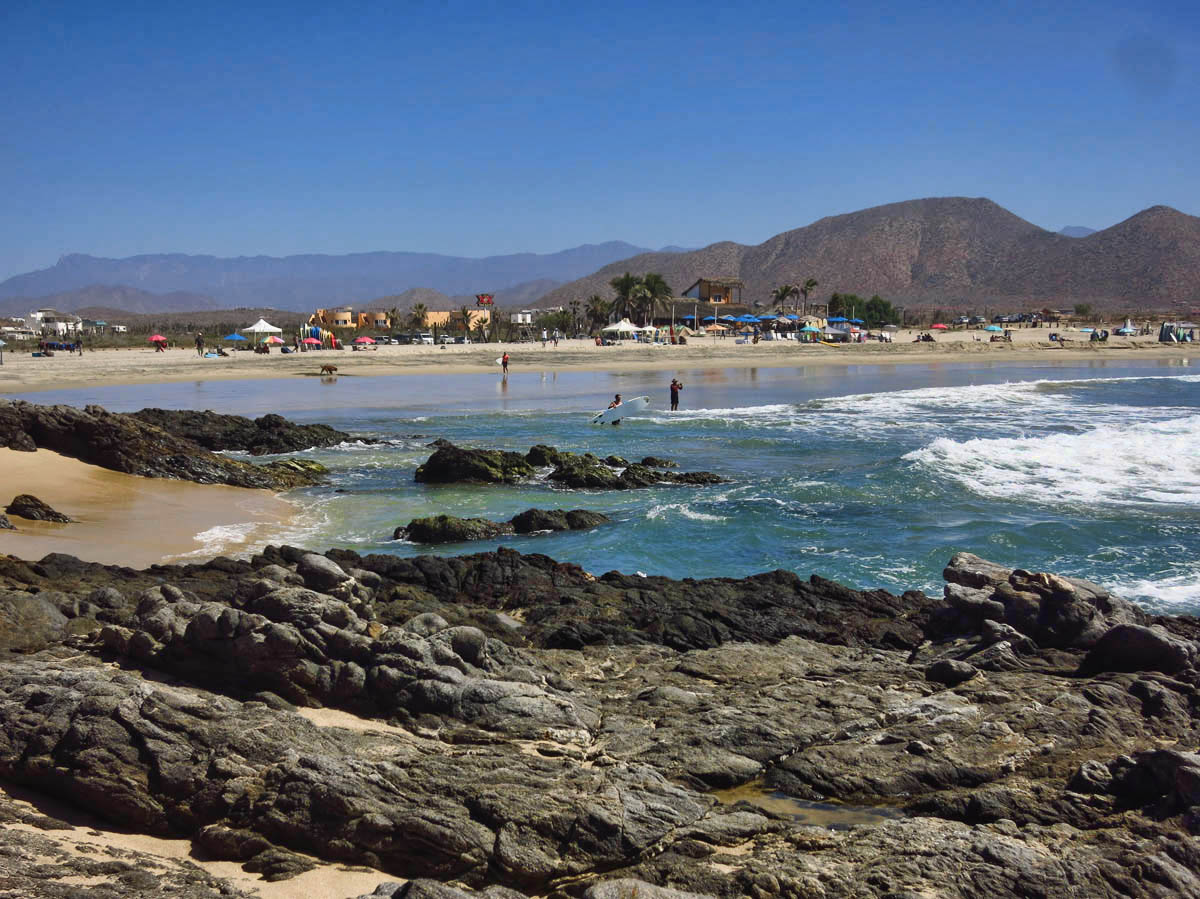 Looking back over Playa Los Cerritos from the headland trail. 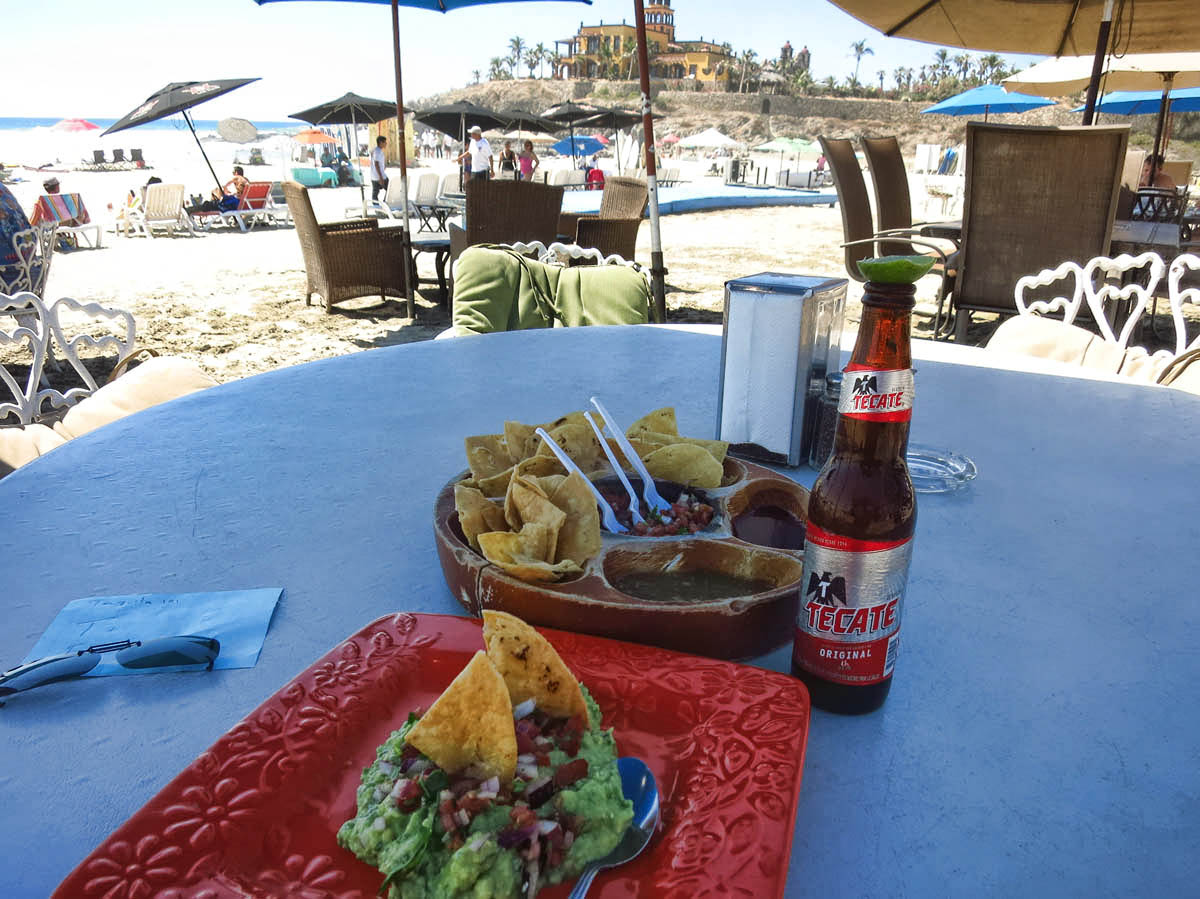 Lunch at the beach cafe’. US prices, but still not a bad deal for under $8 US, as the guacamole was a full meal.

The sun is sinking low, which tells me it’s time to make my way back out to the highway to wait for the 4:40pm bus back to town.  As I turn up the dusty road now hot from the western sun, I see Joe coming on his bicycle.  He stops, “Hey!  I know you!  Are you walking cause you wanna be?”  I tell him not really, as I am too relaxed from the massage.   “But no one has stopped to offer me a ride.  I guess I don’t exactly have ‘the surfer look!”   He sees a car coming up the road, and he raises his hand.  The car stops.  It’s a Mexican family with two small kids in the back, so I feel safe.  Joe rattles off a paragraph of Spanish, the only word I know being “Pescadero,” the nearby town with a bus stop.   I hop in, he waves me off, and away he goes…like a firefly.  😉

Since I could not get wifi in my room in Hotel Gulguarte and the “bed” (four inches of memory foam on an concrete slab) was killing my back, I ‘traded up” to the Maria Bonita for my remaining two nights in Todos Santos. 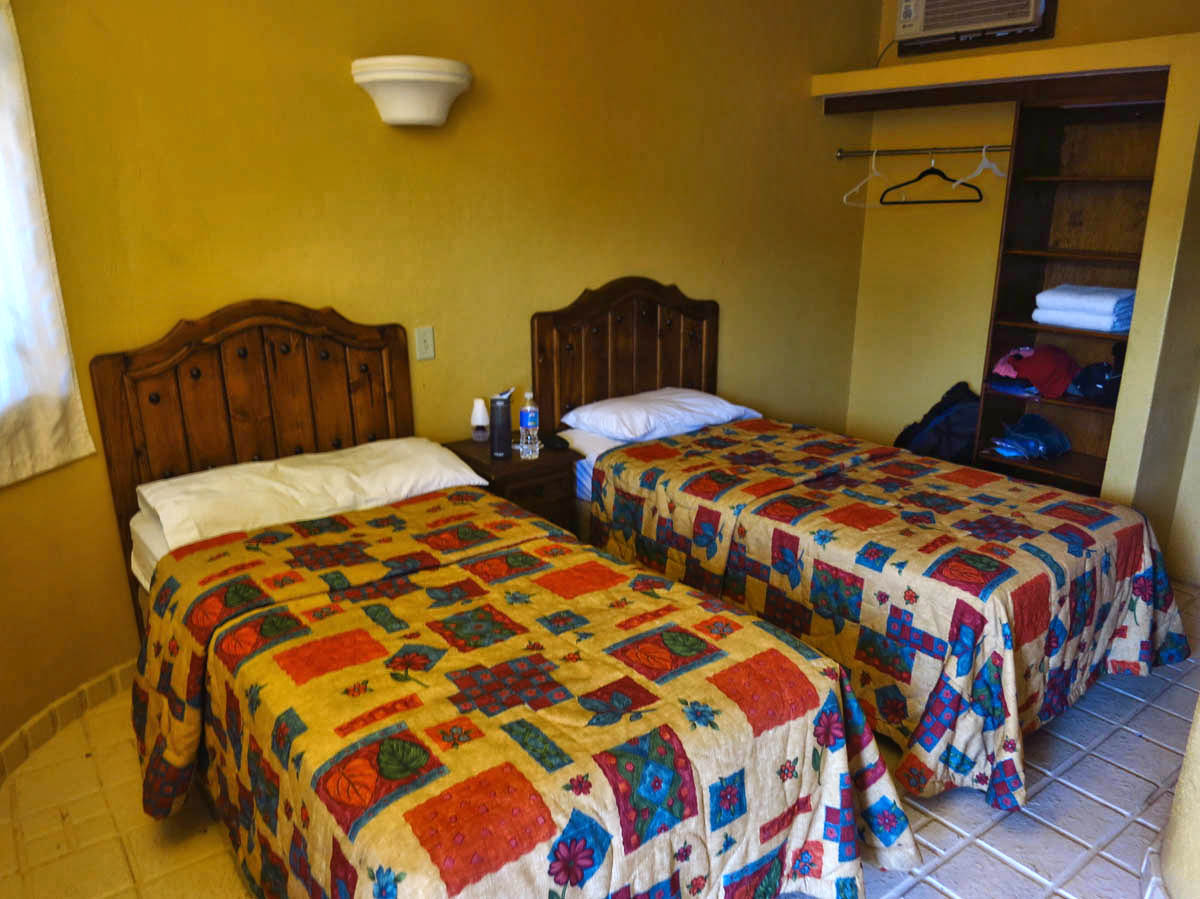 No bathroom photo, as it was so small, I couldn’t get back far enough to get anything but the shower door!