The intention on arriving at the Hole in the Wall Campground in Mojave Preserve was that we would spend a night or two while scouting around for a suitable boondocking spot to finish out the remainder of the Spring Break week/Easter weekend.   However, we are unable to find a signal on our nearby scouting attempts, driving down dusty roads in Jim and Gayle’s Subaru while monitoring our respective devices, me with a Verizon Mifi in one hand and an AT&T iphone in the other, both which indicate “No Service.”   So rather than waste time driving down washboard side roads, we call ourselves lucky to have 4G service in this “no hook-ups” campground in the middle of nowhere, and settle in for the week. 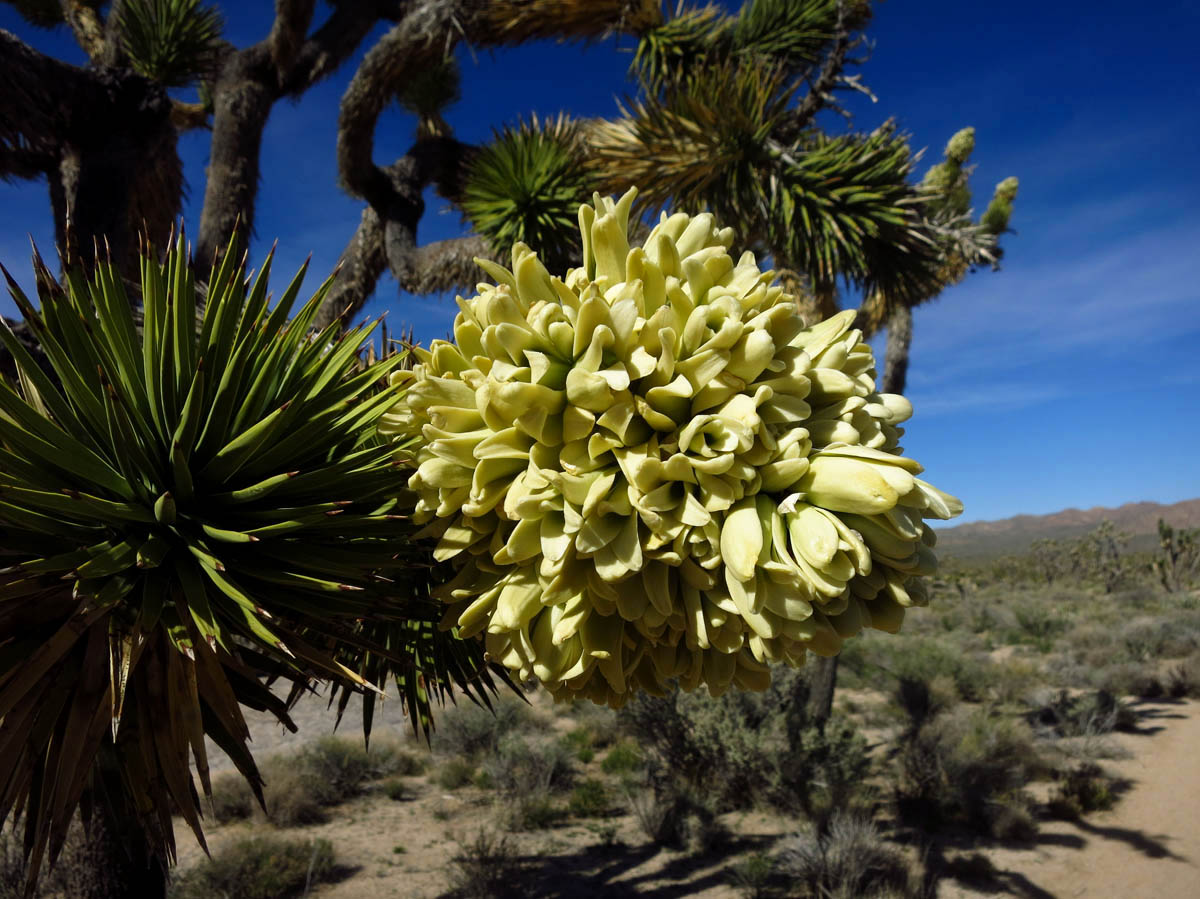 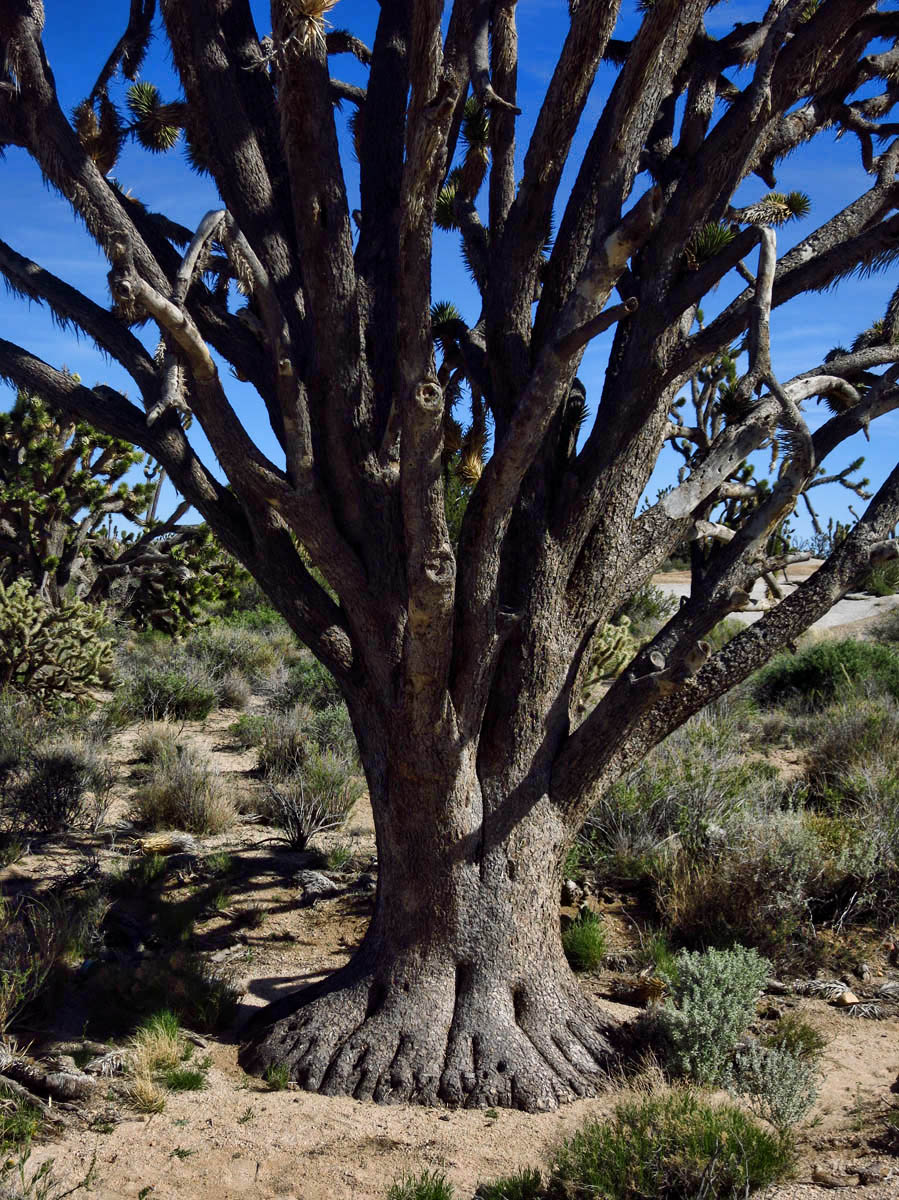 Instead of roots, this one has toes. 😉 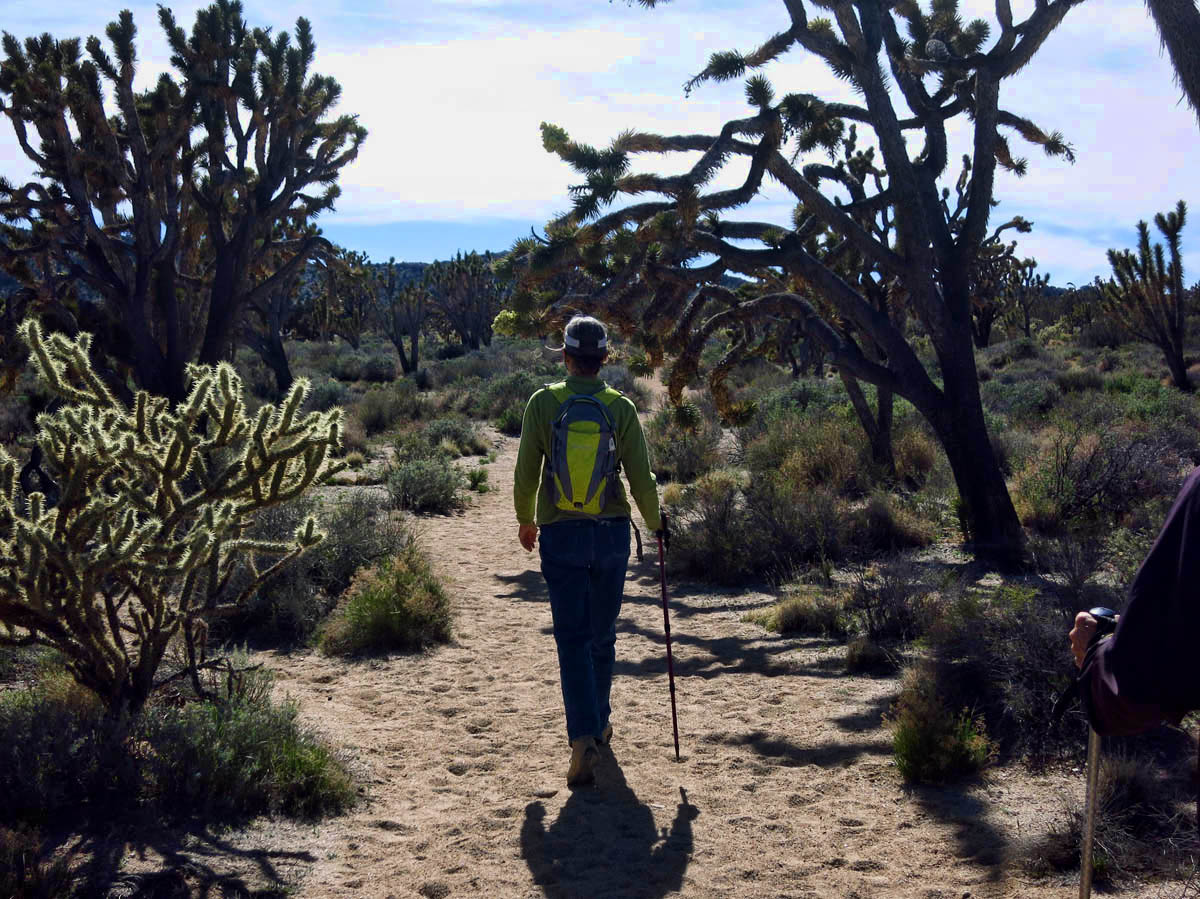 The hike to Teutonia Peak, 3.5 miles goes through this Joshua Tree forest.

The Mojave Preserve, established as part of the National Park system in 1994, contains 1.6 million acres, over half of it wilderness.   There is nothing here yet there is everything here.  Three of the four major North American Deserts come together here to make up 30 different habitats; volcanic fields, lava tubes, cinder cones, sand dunes, etc.   One of these habitats contains the largest Joshua Tree forest in the world, which sits atop Cima Dome, a 1,500 ft symmetrical granite mound that rises up over 70 square miles, giving the simulated impression of curvature of the earth. 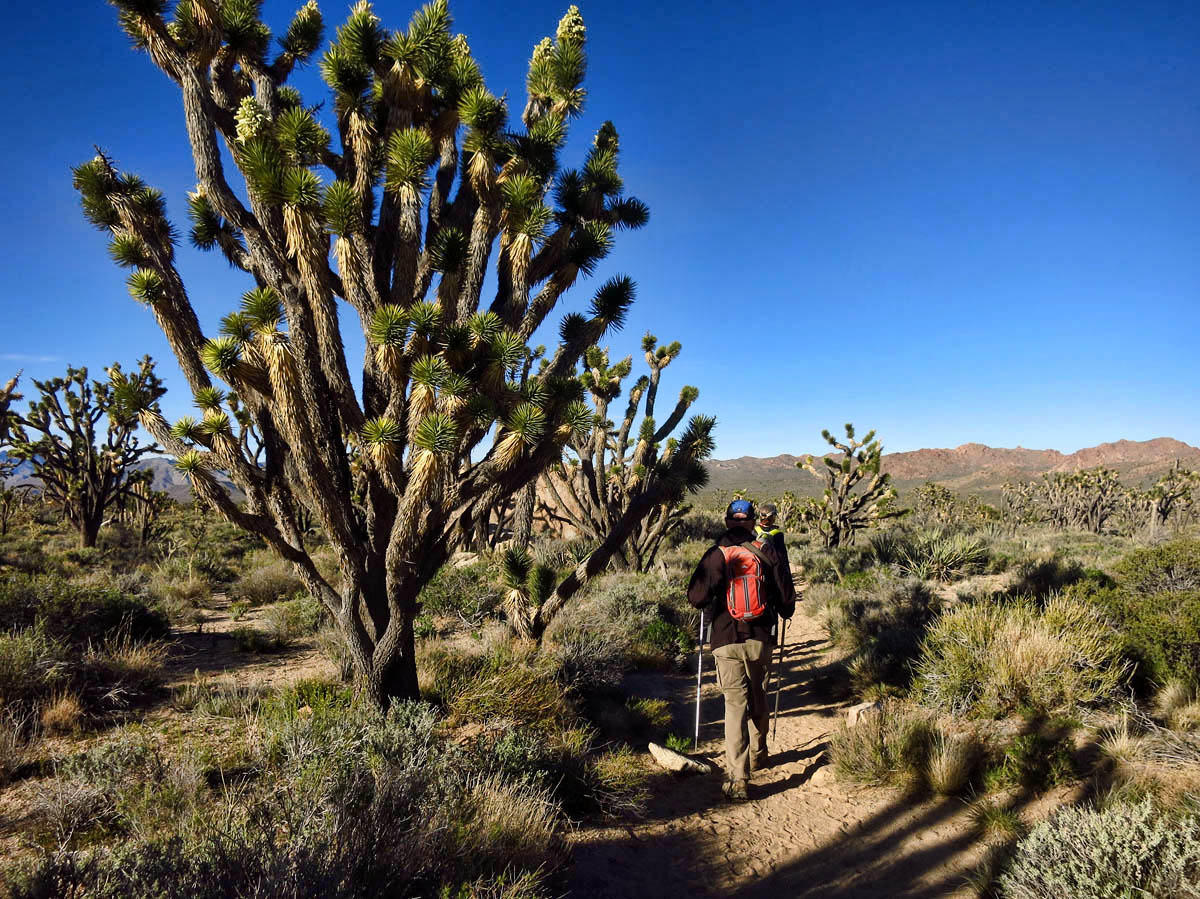 The Joshua Trees are a slightly different species than those from the park by the same name. 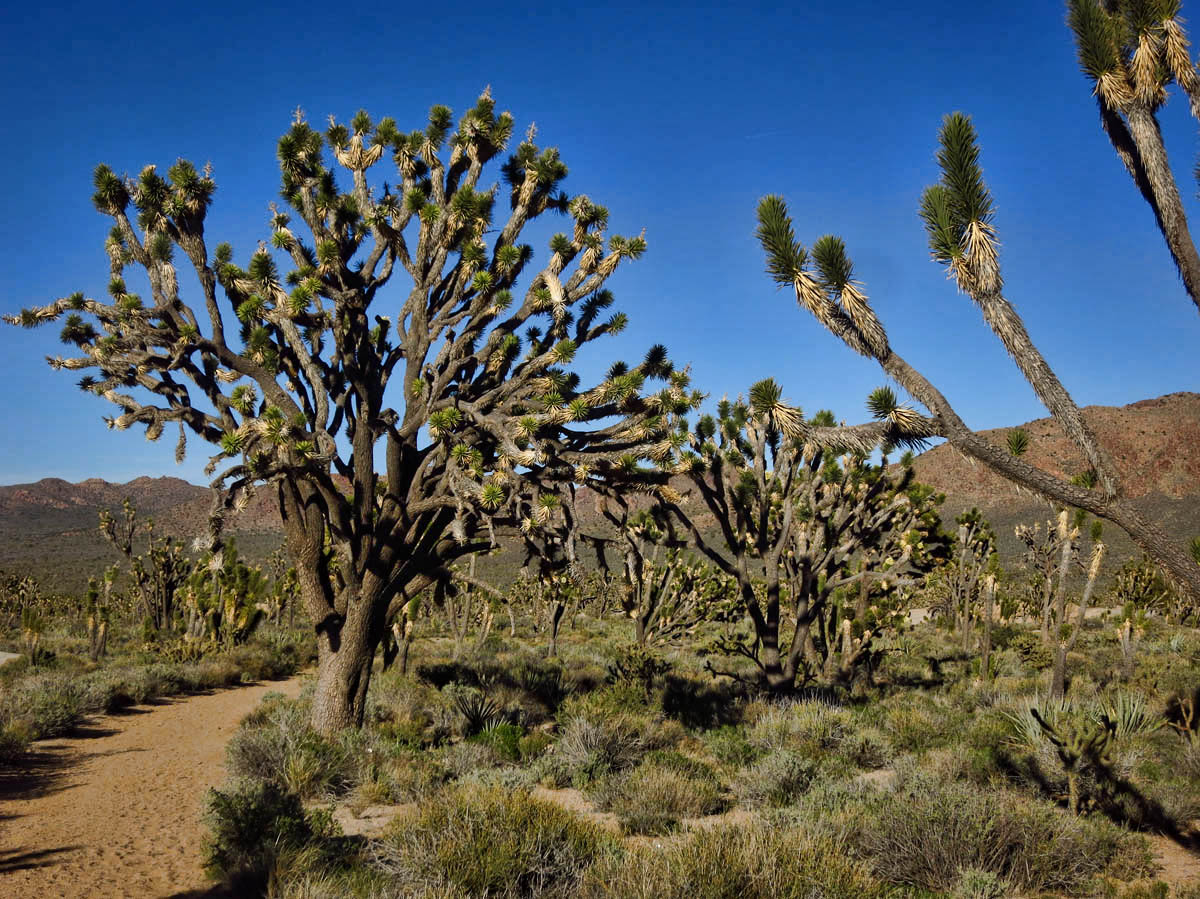 They have more arms, and are a bit more “spindly.” 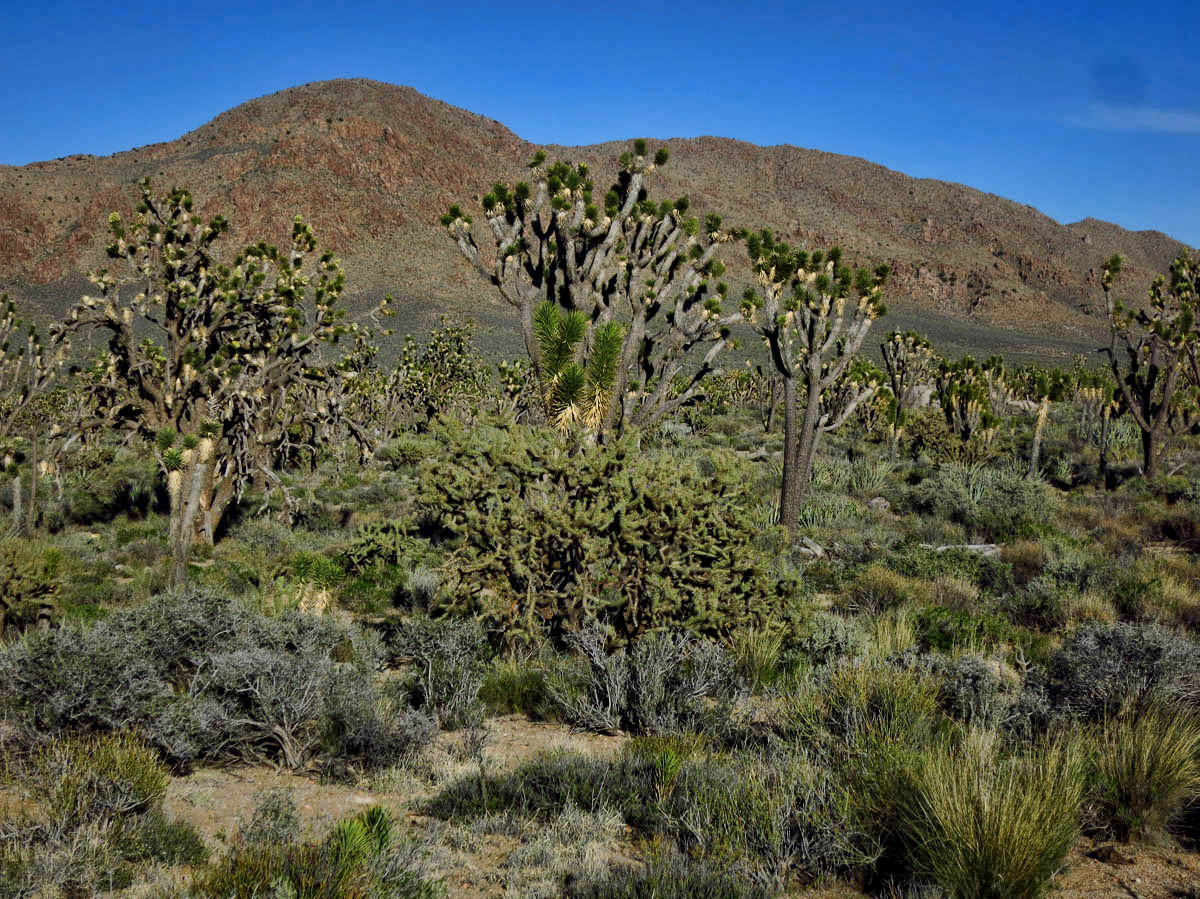 The “Mojave Road” was a major pathway to the Pacific used by the Mohave Indians, followed by explorers and settlers such as Jeddediah Smith, the first “white man” to reach the California Coast.   Used as a major military wagon road until it was replaced by the railway in  1883, it still exists today as a 4WD track across the preserve. 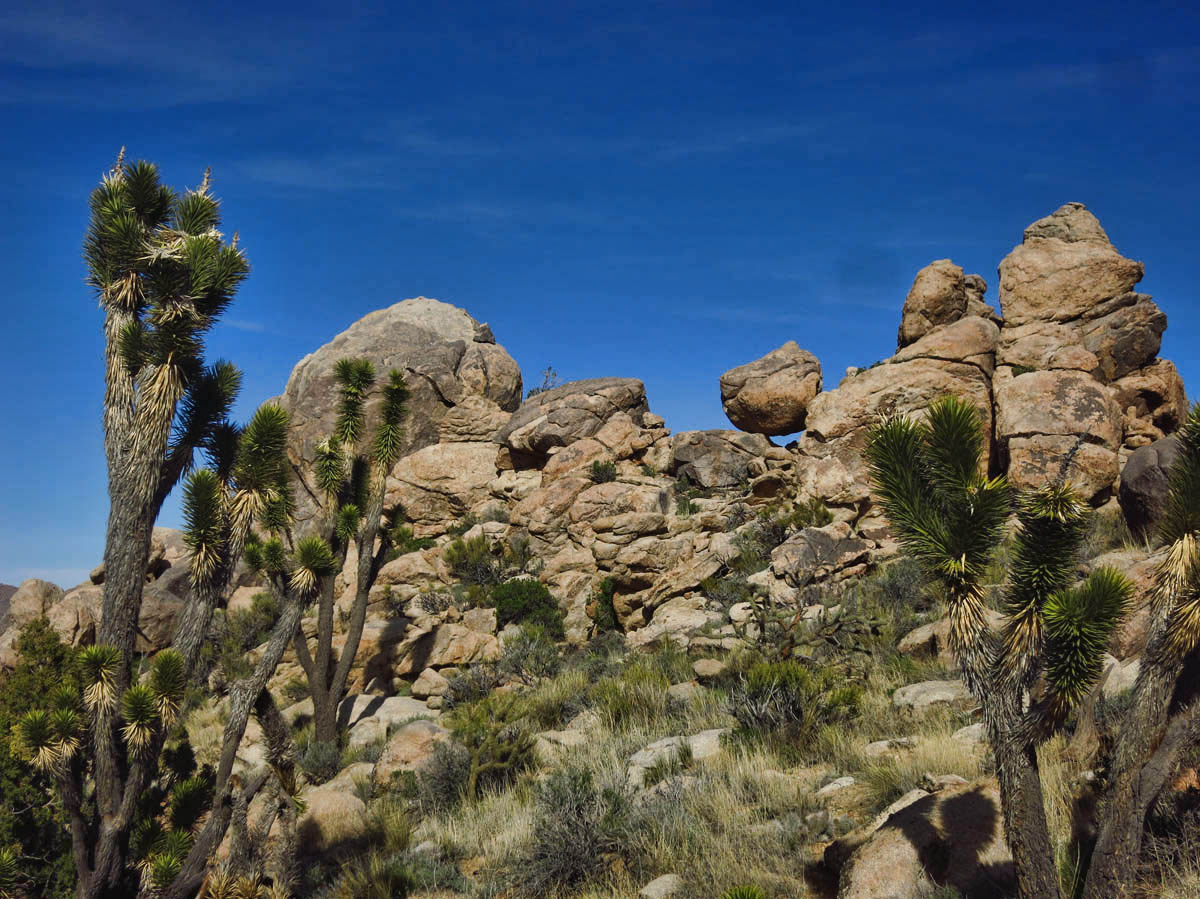 The sign at the trail head for Teutonia Peak reads, “”While crossing the slope of Cima Dome in its first mile, Teutonia Peak Trail passes through the densest concentration of Joshua trees in the world. After passing the remnants of the old Teutonia Mine, the trail gains 750 feet ascending the rocky peak in the distance.” 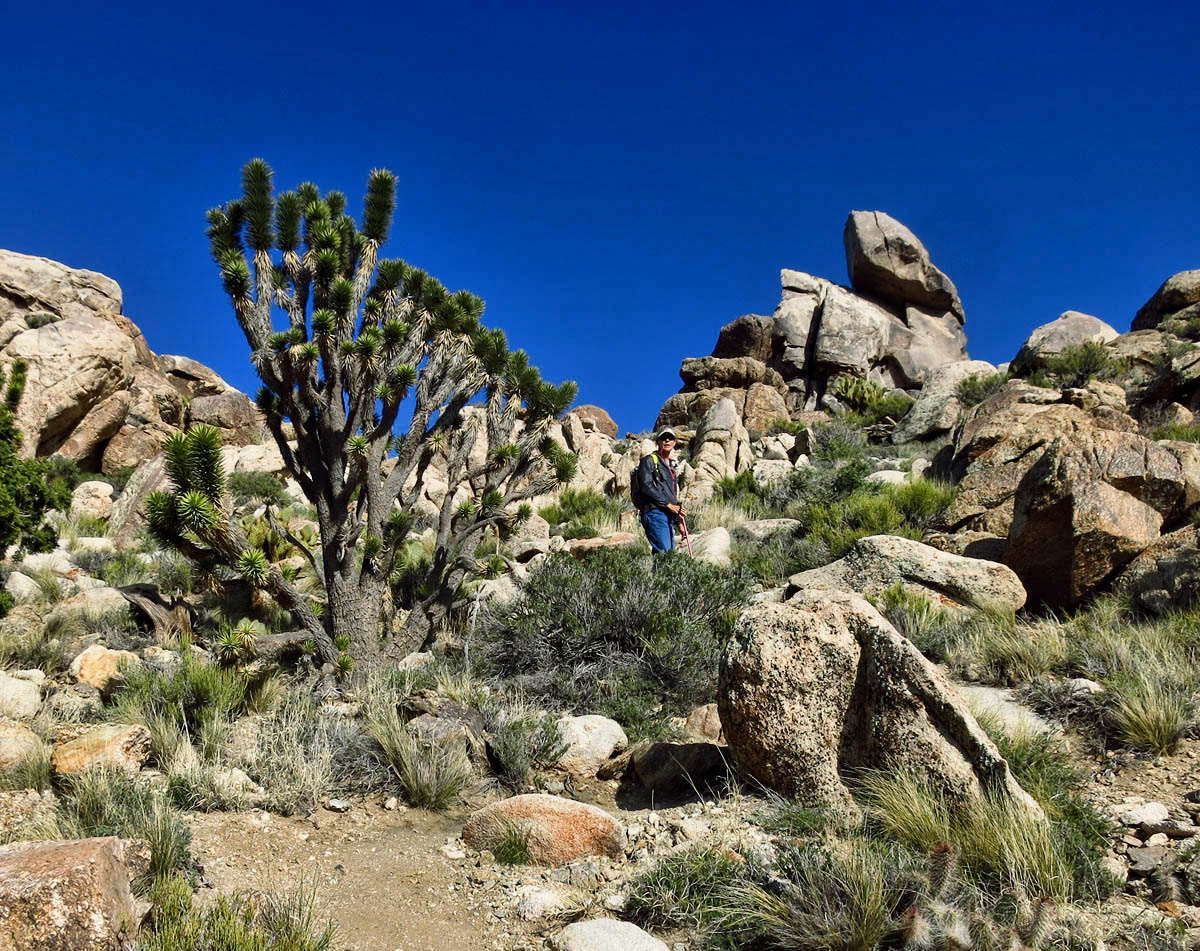 I love the staggered arms on the tree on the left. 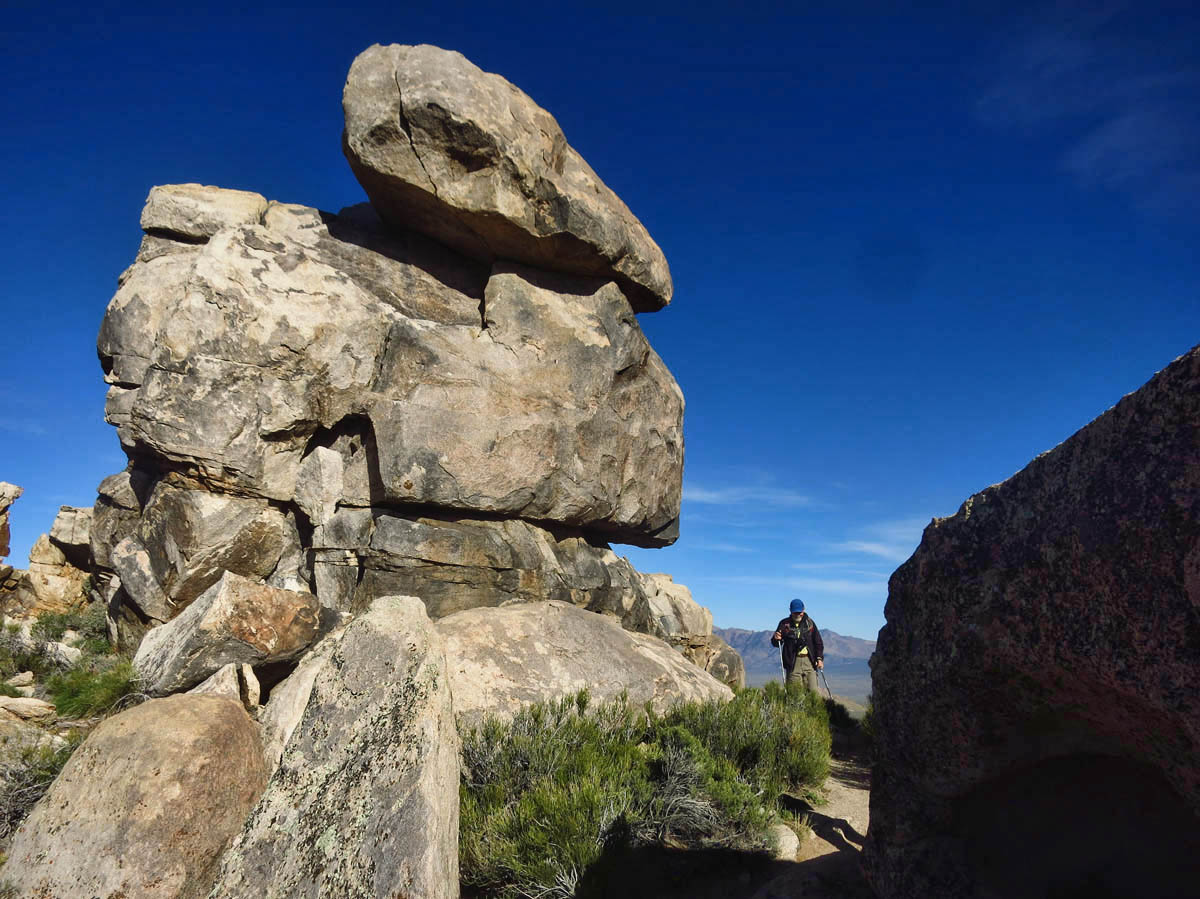 As close to the “summit” as we will get… 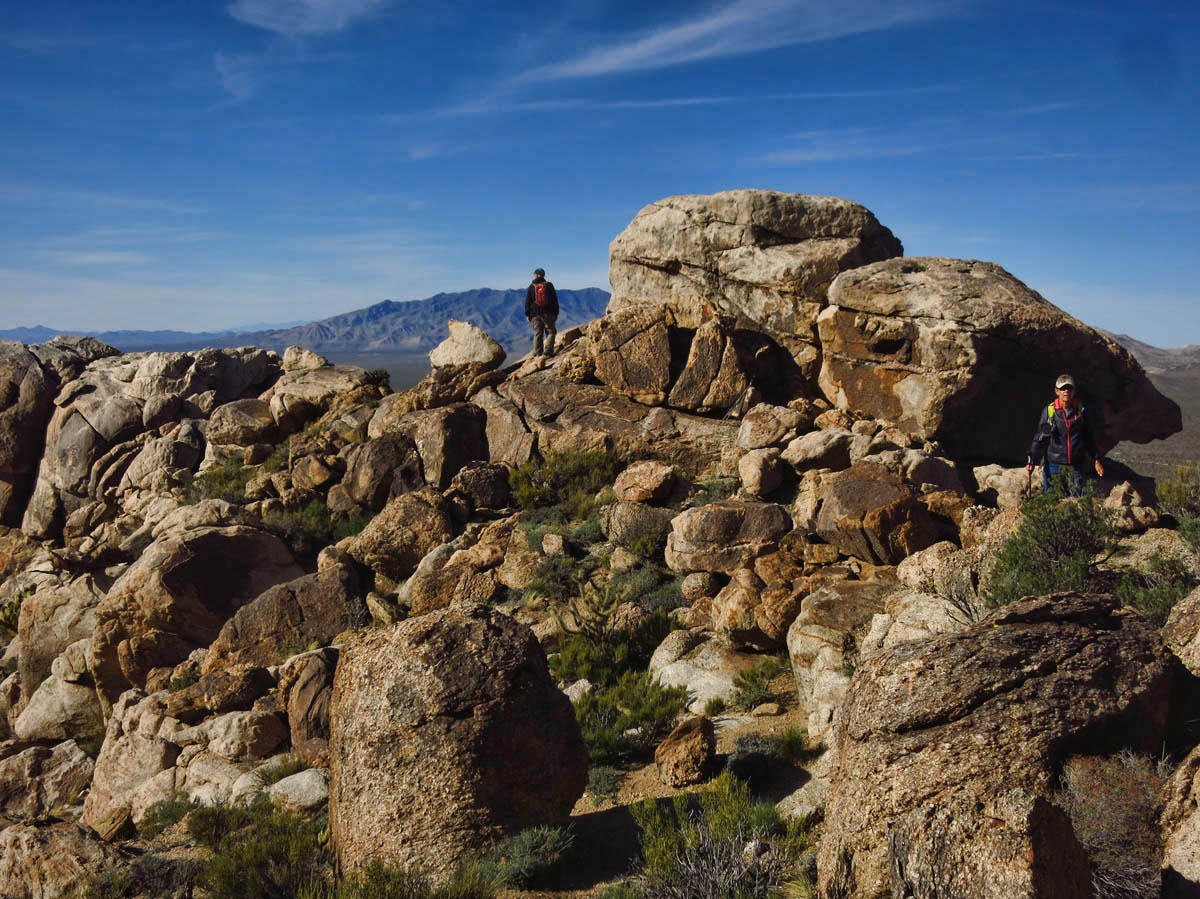 I never could get an answer on why I see the name spelled both ways, “Mojave” versus “Mohave.”   But even on the bronze commemorative plaque from where I paraphrased the Mojave Road information, the two spellings are used interchangeably. 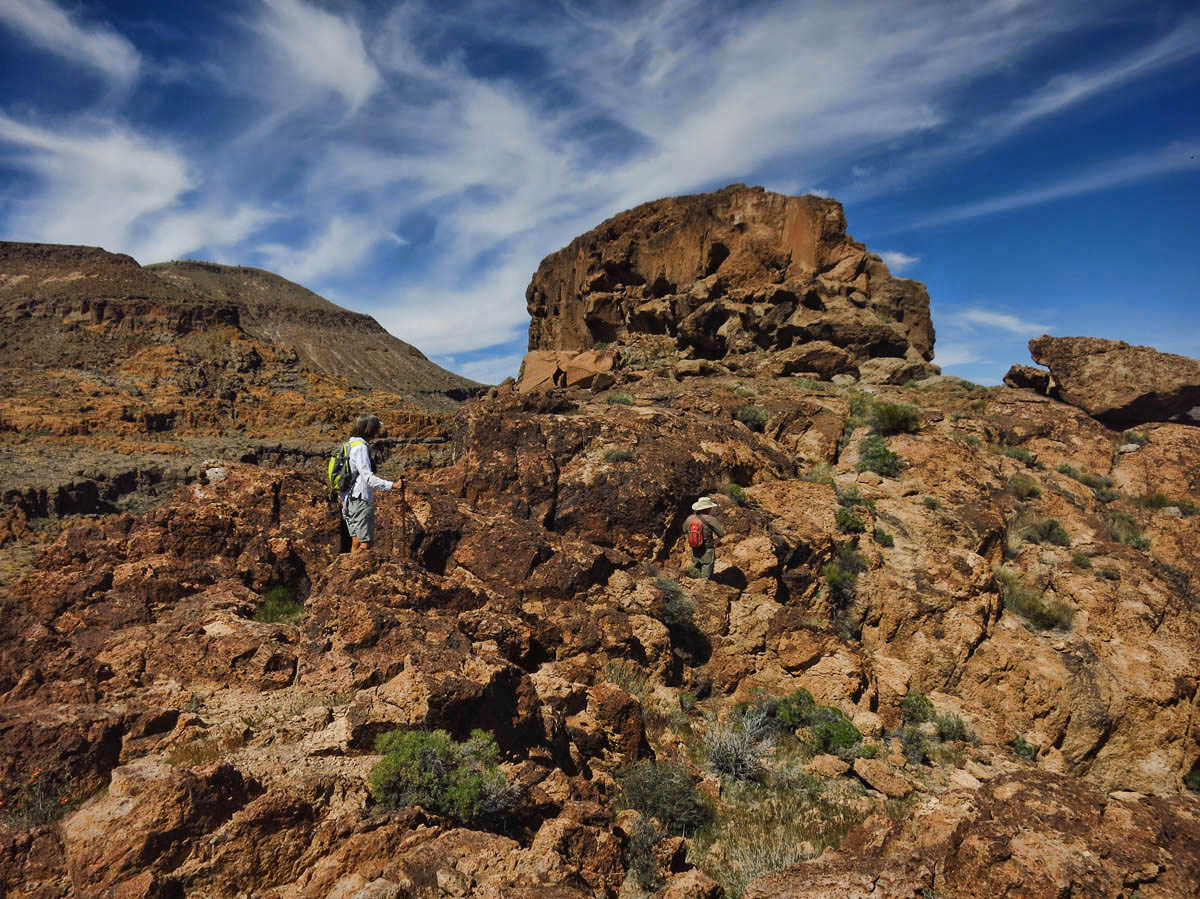 An “off trail” hike up around Barber Peak near the Hole in the Wall CG. 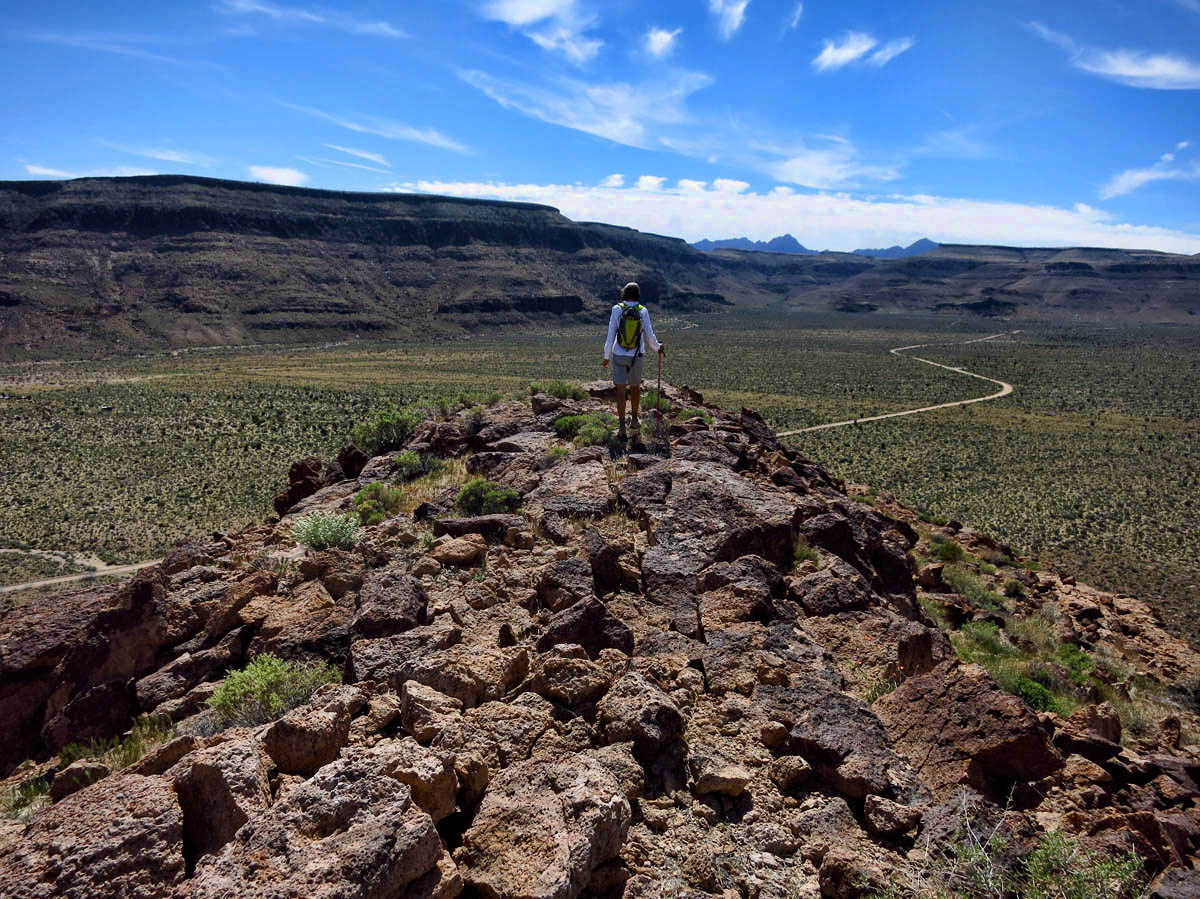 Exploring the ridge line as far as it goes… 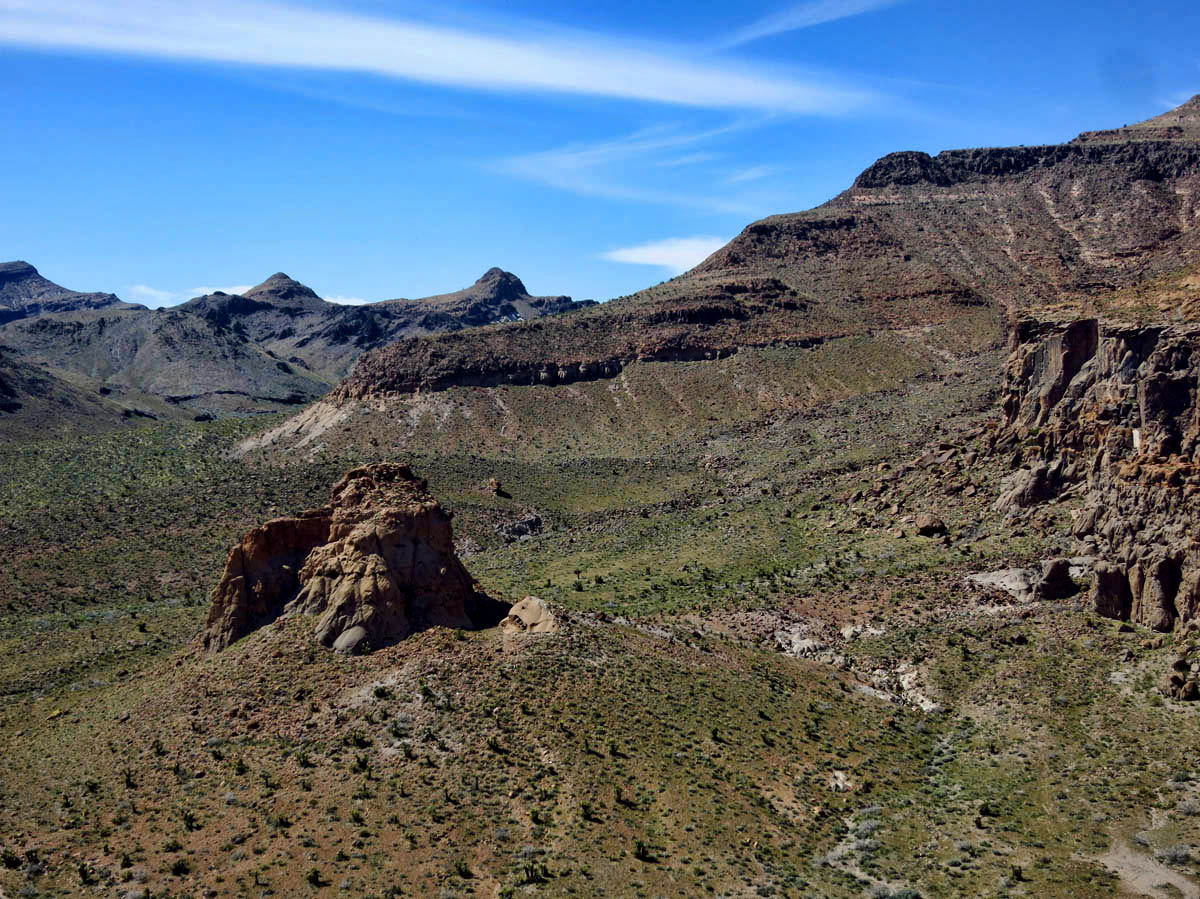 Lots of boondocking down there if you aren’t addicted to internet.

There are no services in the Preserve, and when I say “no services,” I mean you had better bring everything you want with you from gasoline to groceries.  There are a few cans of Coke and Snicker Bars at the Visitor Center in case of emergency, but otherwise you had better be well provisioned.  For me, this also means eating my own cooking.  Although I had plenty of frozen items, by the end of the week my fridge was void of anything still living despite a big “shop” at Trader Joes before arriving.  But I rather enjoyed the lack of dining distractions for a week. 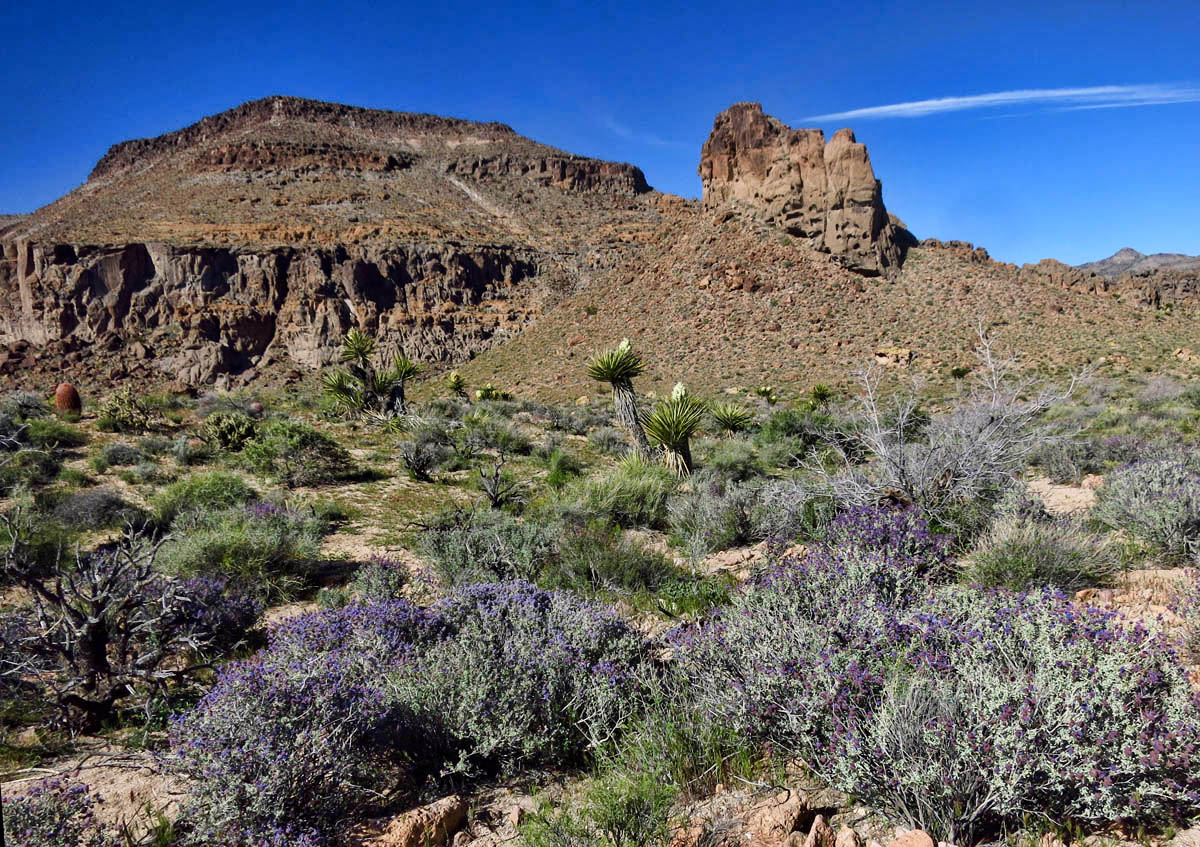 Nature Trail links Hole in the Wall Campground with Visitor’s Center of same name (not open daily, so check before you go.) 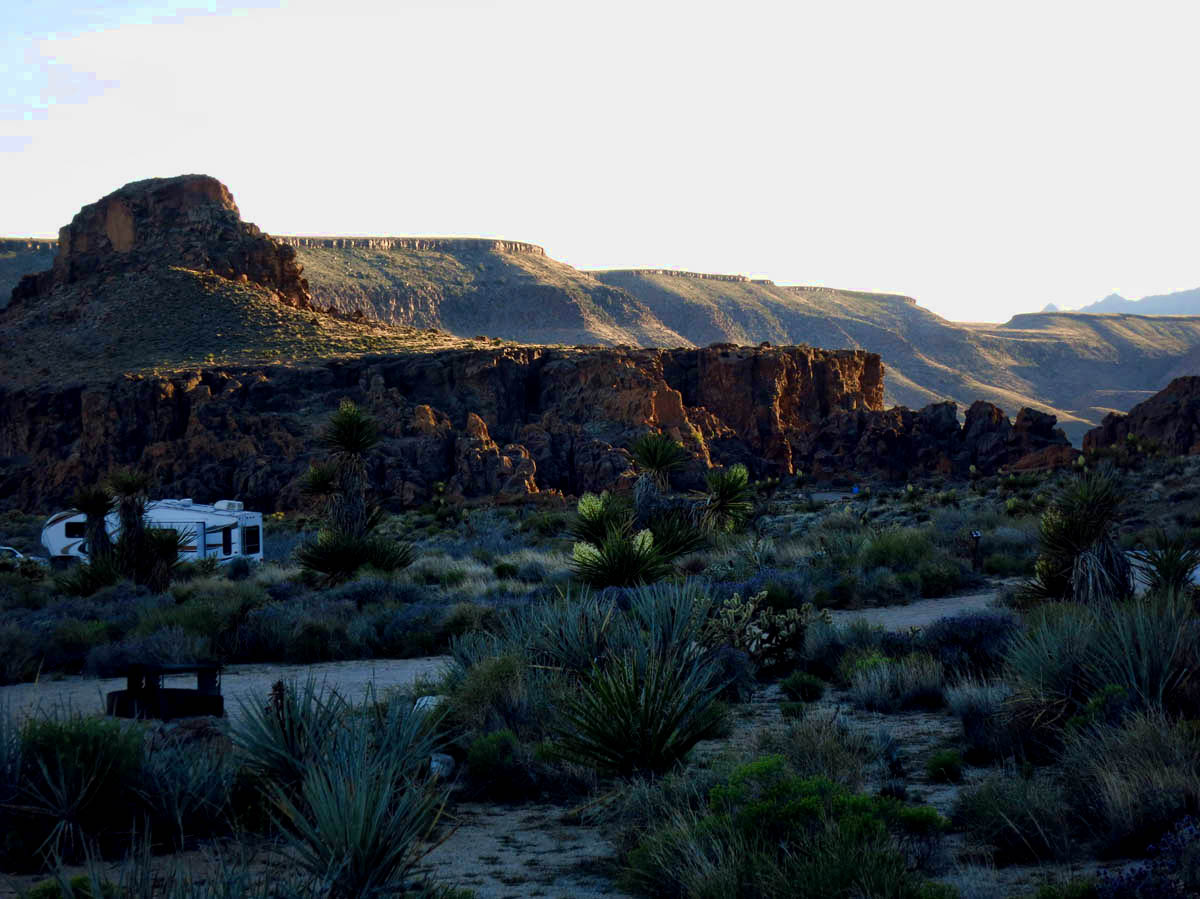 View from my campsite 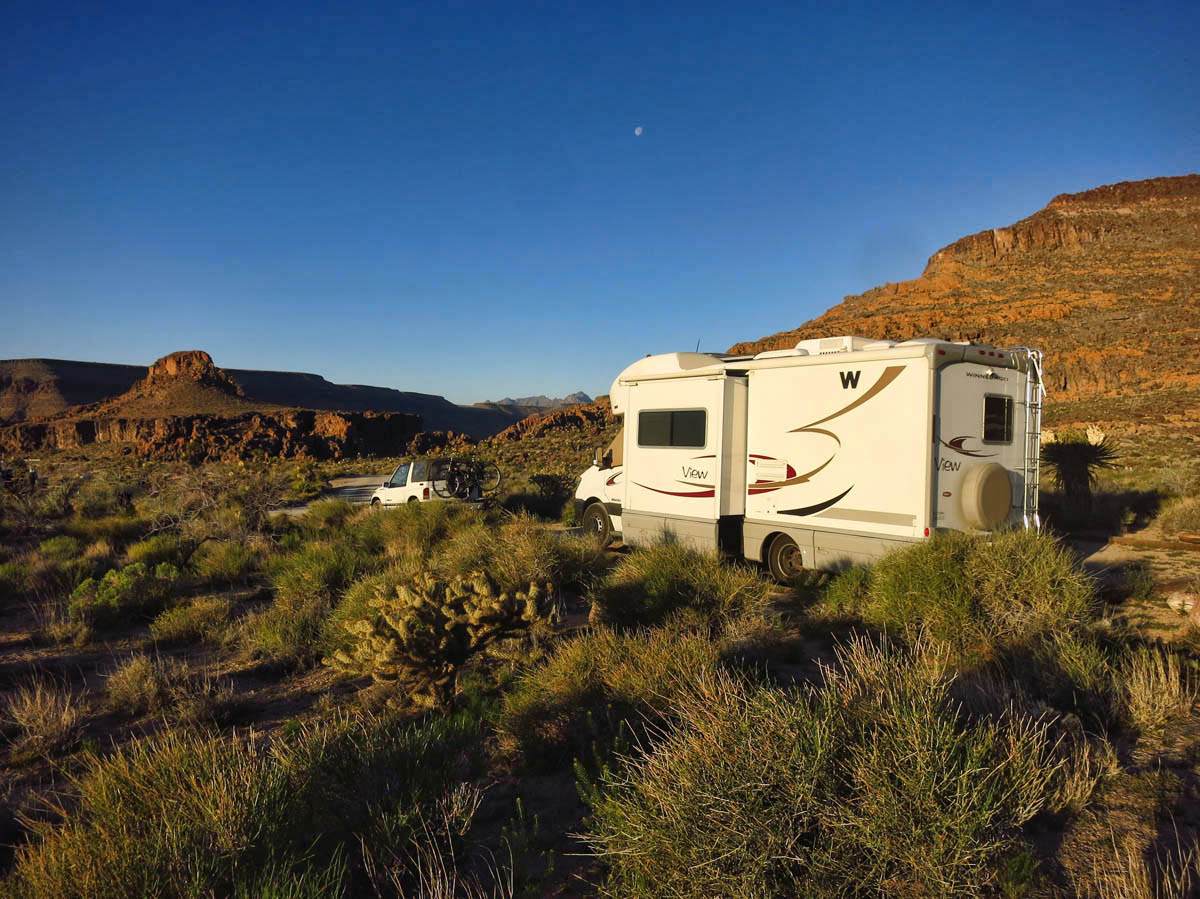 We went through the mother of all windstorms here in Hole in the Wall….not once but twice.  There have been few times in the Winnie when I have been too uneasy to sleep, and this was one of them.   Otherwise, the campground was extraordinarily quiet and serene, as I settled into the rhythm of the sun setting on one side of the Winnie and the waning moon setting over the mountain on the other side, with all the brilliant night stars in between.  A perfect place to watch the resurrection of Spring….in the desert. 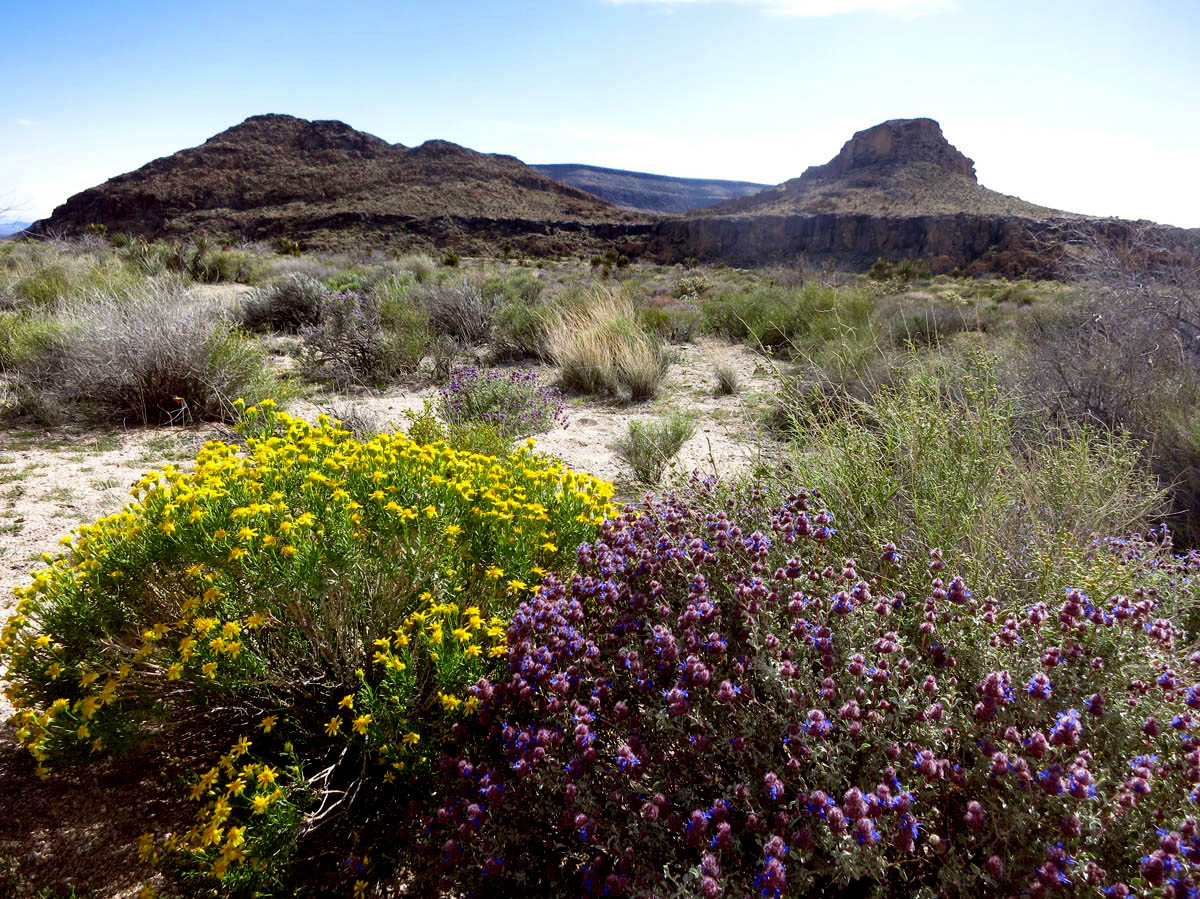 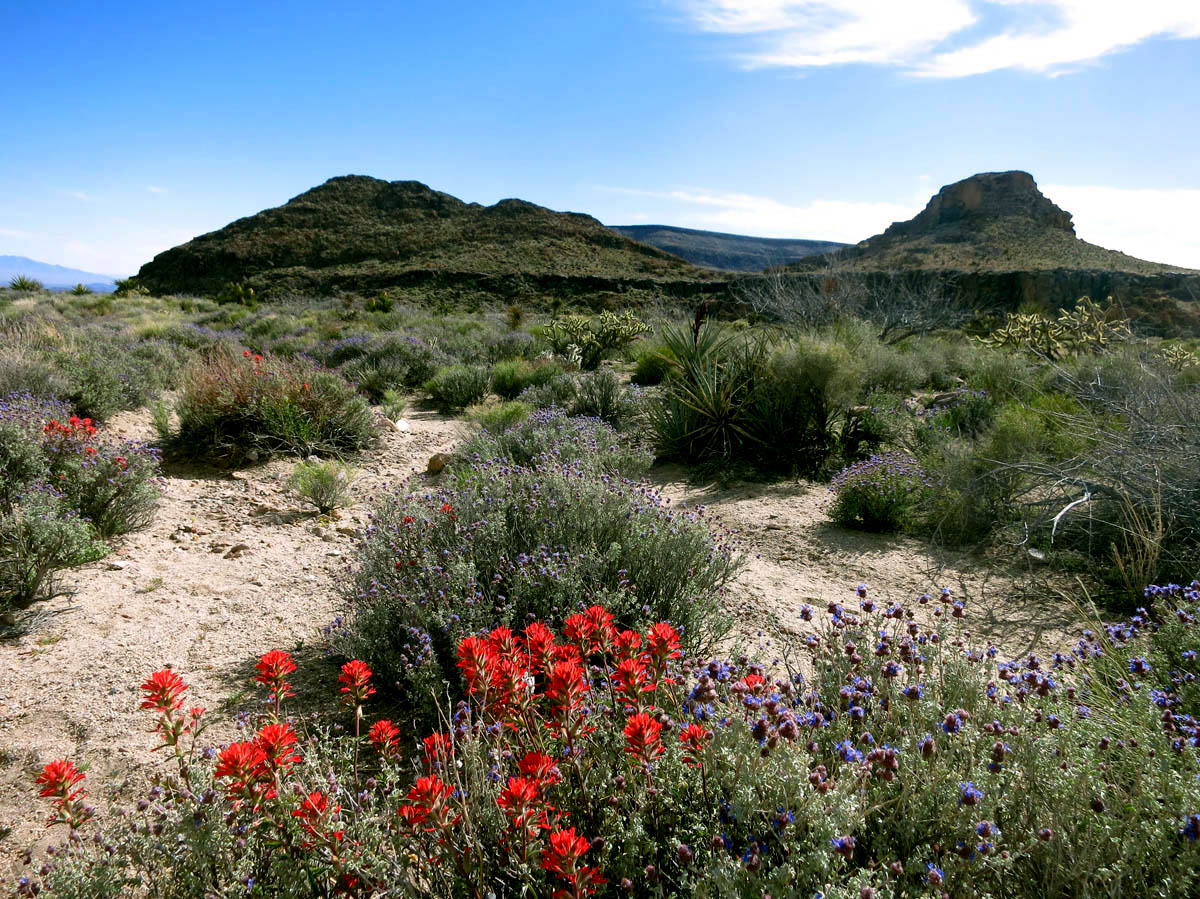 “For all the toll the desert takes of a man it gives compensations, deep breaths, deep sleep, and the communion of the stars.” ~ Mary Austin, “The Land of Little Rain”

13 thoughts on “At Home in Hole in the Wall”