I have a terrible memory, as I am reminded every time my 87 year old mother prefaces a bit of family history with “You don’t remember???” I can’t remember much about any of my “formative years.” But what memories I do have are vivid. For example, I still remember exactly where I was on August 8, 1974.

I remember sitting cross-legged on the nubby gold couch in the dorm “living area,” watching the only TV in the entire dorm. I was in summer school making up the Organic Chemistry class I had flunked the semester prior. The dorm was fairly empty during the summer months, so only a few of us gathered round that TV to watch history unfold, as Richard Nixon announced, “Therefore, I shall resign the Presidency effective at noon tomorrow. Vice President Ford will be sworn in as President at that hour in this office.”

Those years of my youth are forever engraved in my mind after having grown up watching the Vietnam War unfold on the one and only television screen, whether in the dorm or my family home. I think when one only has one source of information, as opposed to the “shotgun fire” of the multimedia of today; cell phones, tablets, laptops, TVs, it leaves a deeper imprint.

I enjoy visiting the Presidential Libraries and Museums. They are nostalgic of the “movie settings” for the scenes from my movie. I particularly love the period costumes, the props, and exhibits that talk about the issues of the day.  Hindsight provides such a great perspective of the actual events versus media propaganda at the time. It’s also interesting to gauge how my own perspective has changed, thirty years later.

As I meander around the Los Angeles area, I am reminded that there is not one, but two Presidential Libraries along my northerly route up the coast. Even though it’s Saturday when I leave Casper’s Wilderness Campground, I figure an early start might be my best opportunity to avoid LA traffic. I needn’t have worried about waking my neighbors, as they resumed their partying at 7:00am.

Unfortunately, my timing is not good for the Richard Nixon Library & Museum, as it is in the middle of major renovation. The museum itself is closed until November. However, there are a few exhibits still open; the Birthplace, the helicopter Marine One, the replica of the East Room, and the burial site. Since I don’t plan on passing through LA again anytime soon, I figure it’s worthy of a stop.

Due to the renovation, the admission is half off an already low admission price. With my senior discount, it costs me $4.25 to get in.   I manage to kill two hours on the grounds, so I got my money’s worth.  😉

This is my fourth Presidential Library visit (Carter, Johnson, and Clinton.) Even before I step foot into the building, it’s immediately evident that this library is the most spartan I have visited thus far. This could be in part due to the fact that his library and museum was not originally part of the presidential library system, i.e. “federally funded.” It was deeded over from the Nixon Foundation to the National Archives and Records Administration in 2007. But I think it also accurately reflects the minimalism of his Quaker upbringing. And it certainly echoes the legacy, as there is still much controversy over how those darker days are addressed, particularly now that the “tapes” are declassified…

It’s disappointing to have missed the museum, particularly since Nixon Administration had such an impact on my “formative years,” from footprints on the moon to the last ravages of the Vietnam War. Still, it was an interesting tour… 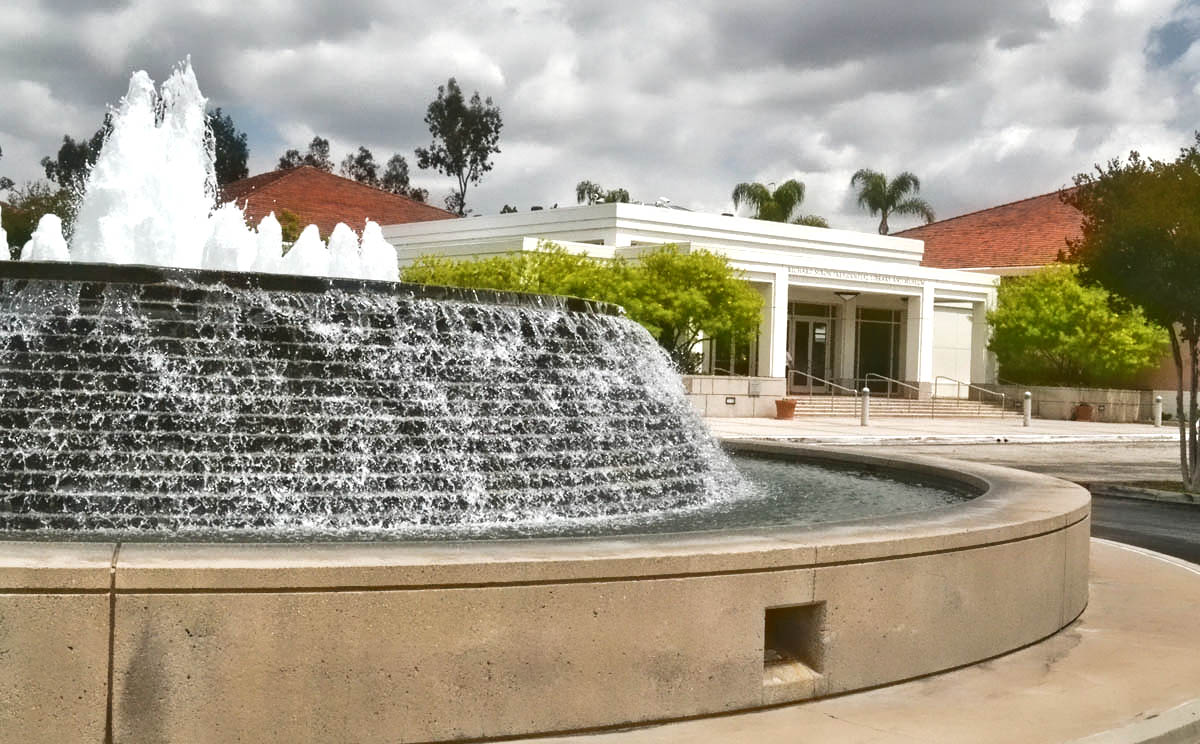 The Library is located in Yorma Linda, slightly northeast of LA. 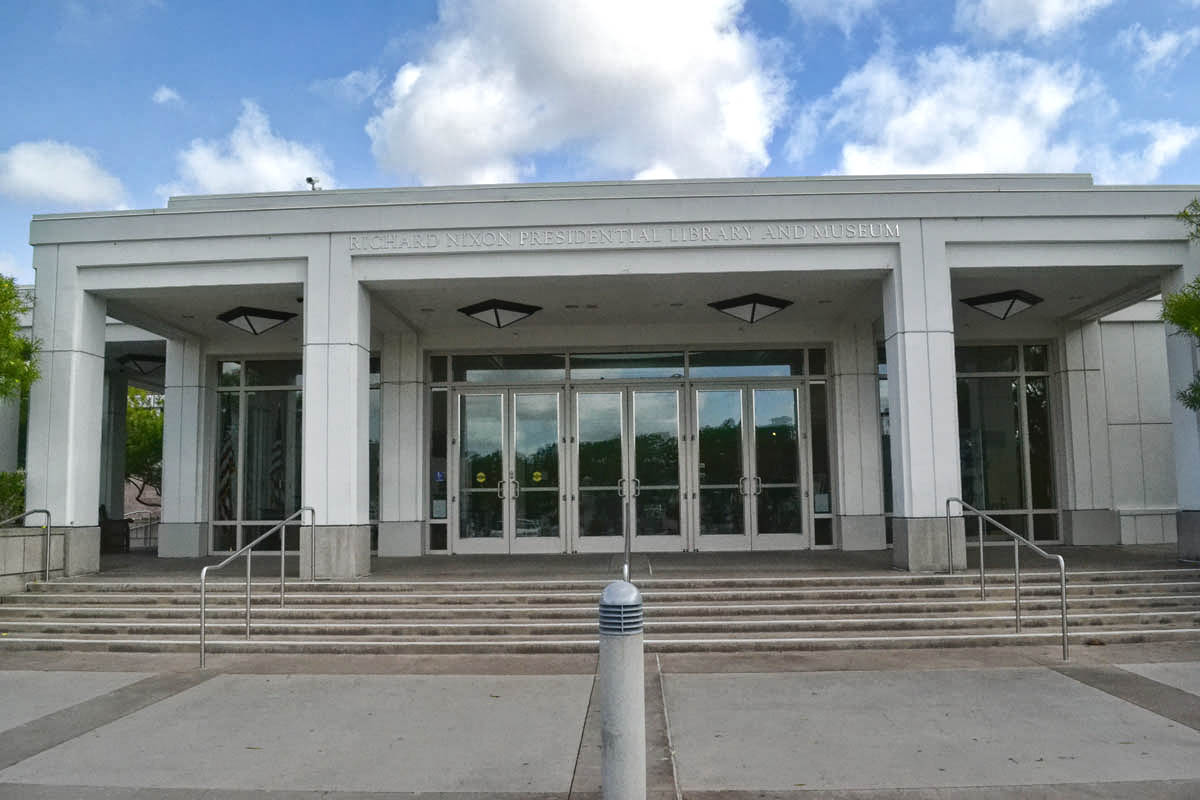 The Nixon Foundation was opened in 1990, but didn’t become part of the National Archives and Records Administration (federally funded) until 2007. 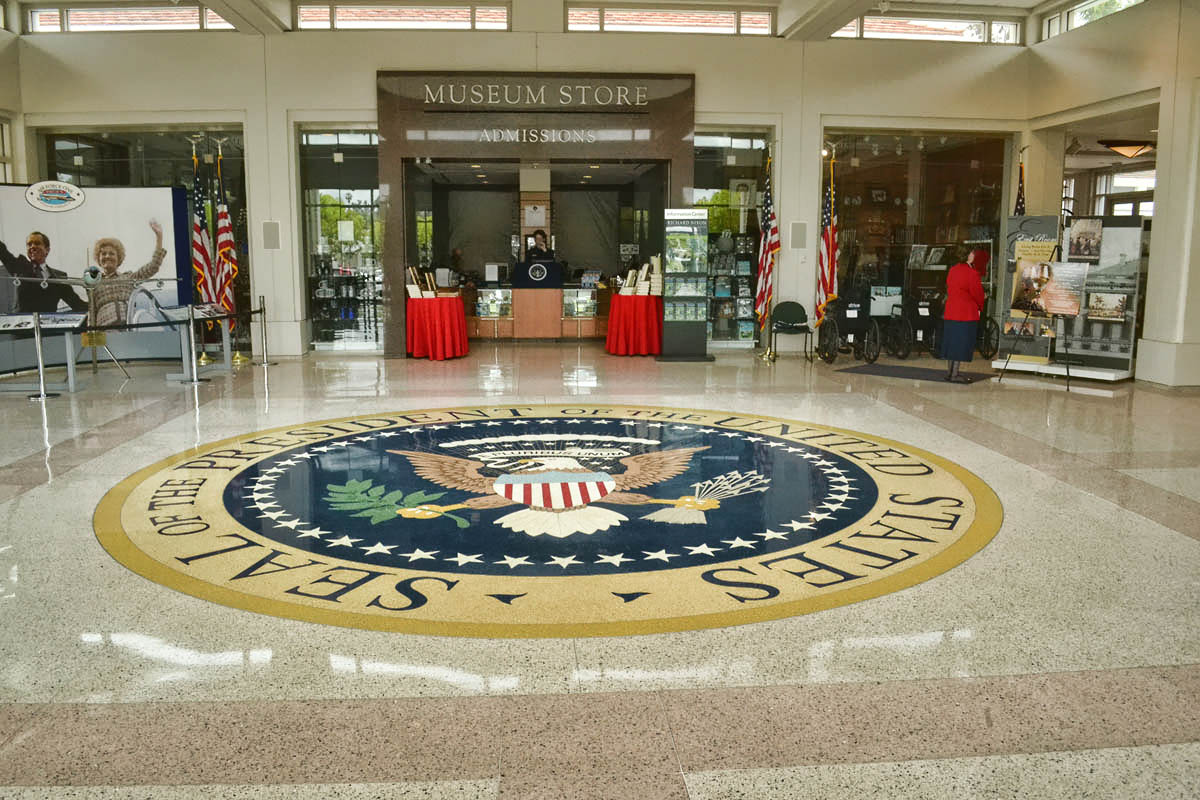 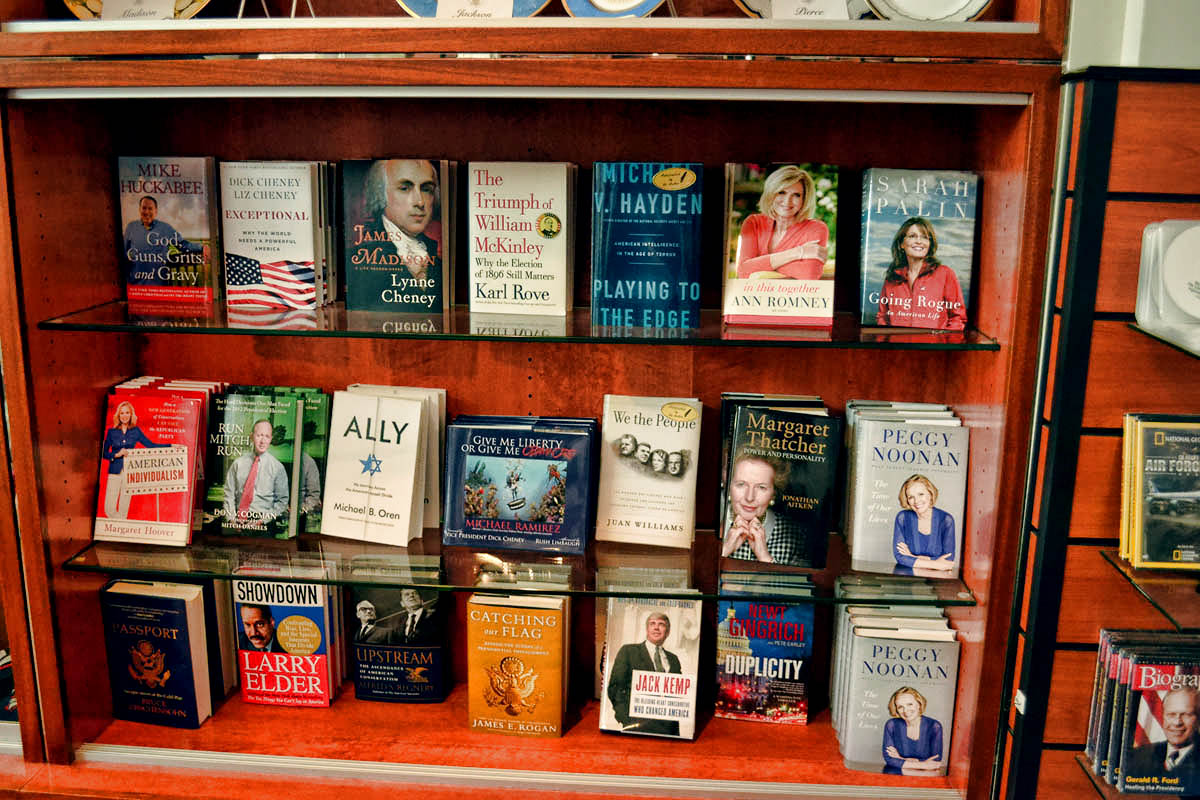 Inside the Museum Store…how can any federal building be taken seriously with a book by Sarah Palin on the shelf??? 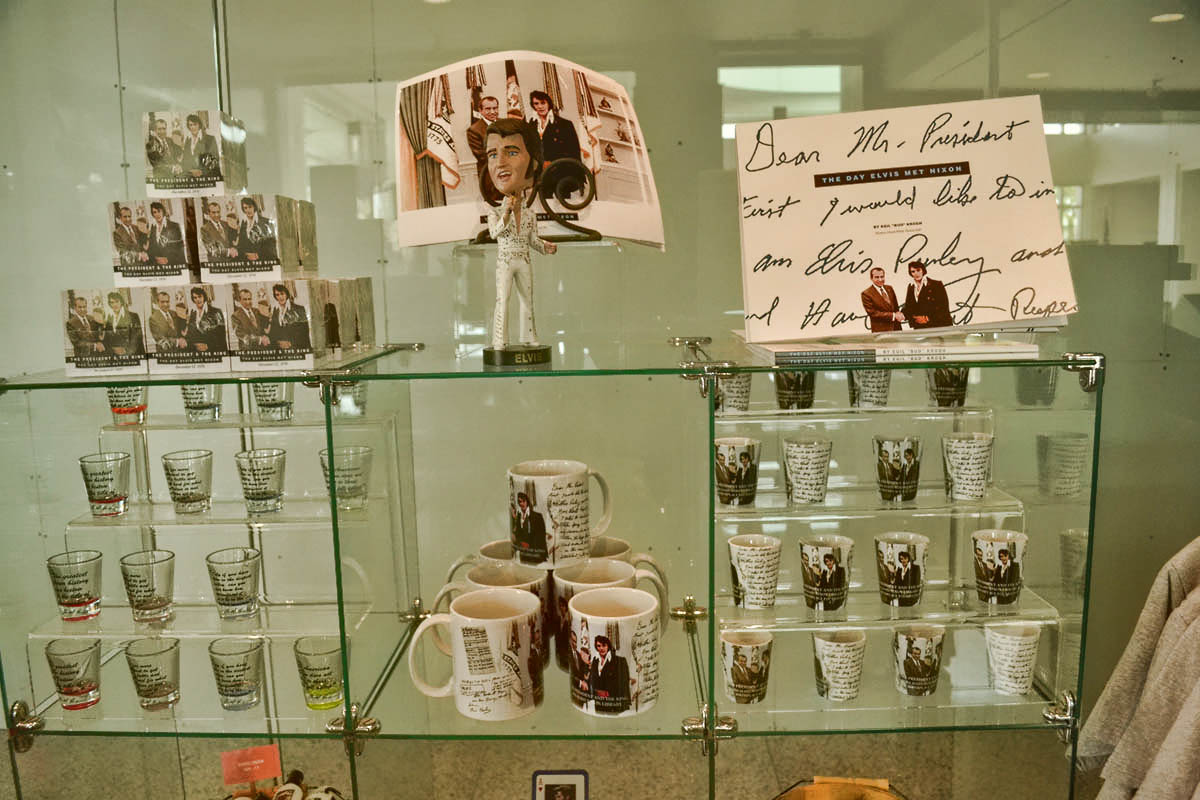 The King earns a corner of the giftshop. Other kitsch includes shot glasses with the quote “Only if you have been in the deepest valley, can you ever know how magnificent it is to be on the highest mountain.” Odd quote for a container for alcohol, no? 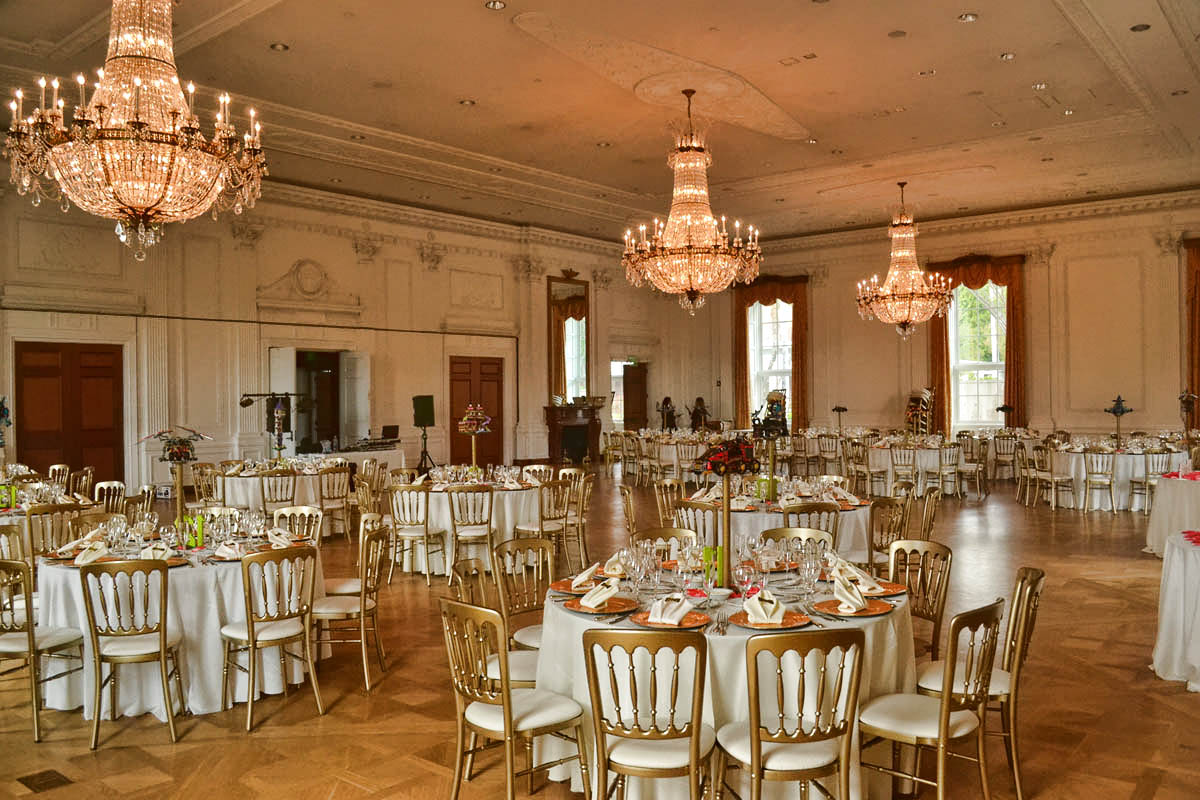 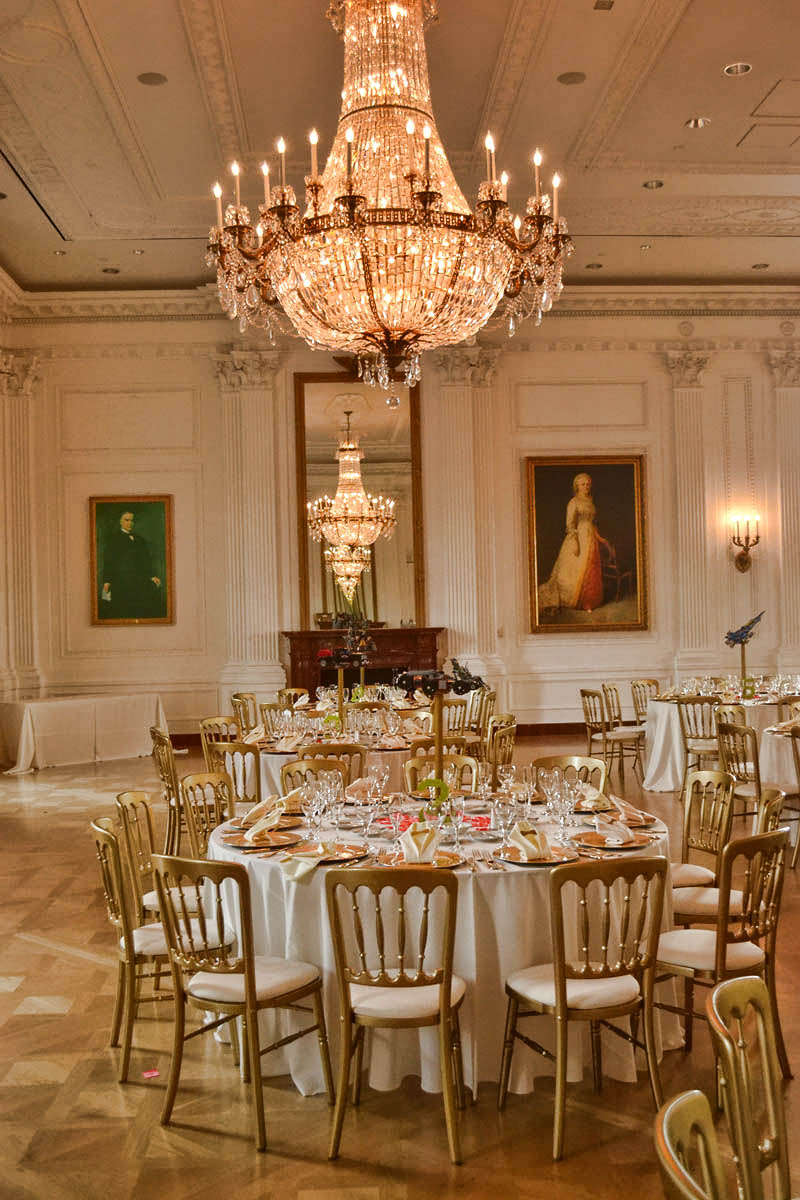 Docent tells me the mirrors were the most difficult to replicate. Chandeliers are cleaned every two months by gloved hand. 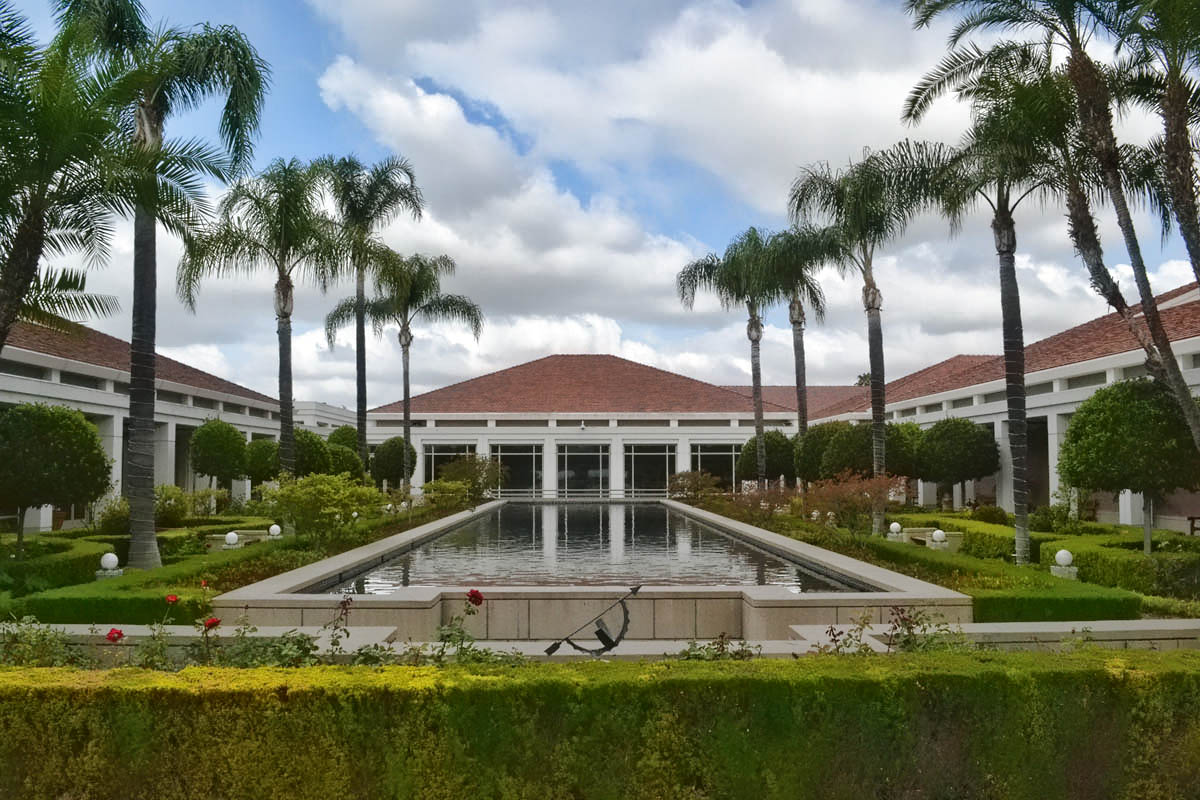 Looking back toward the library and museum from the birthplace. 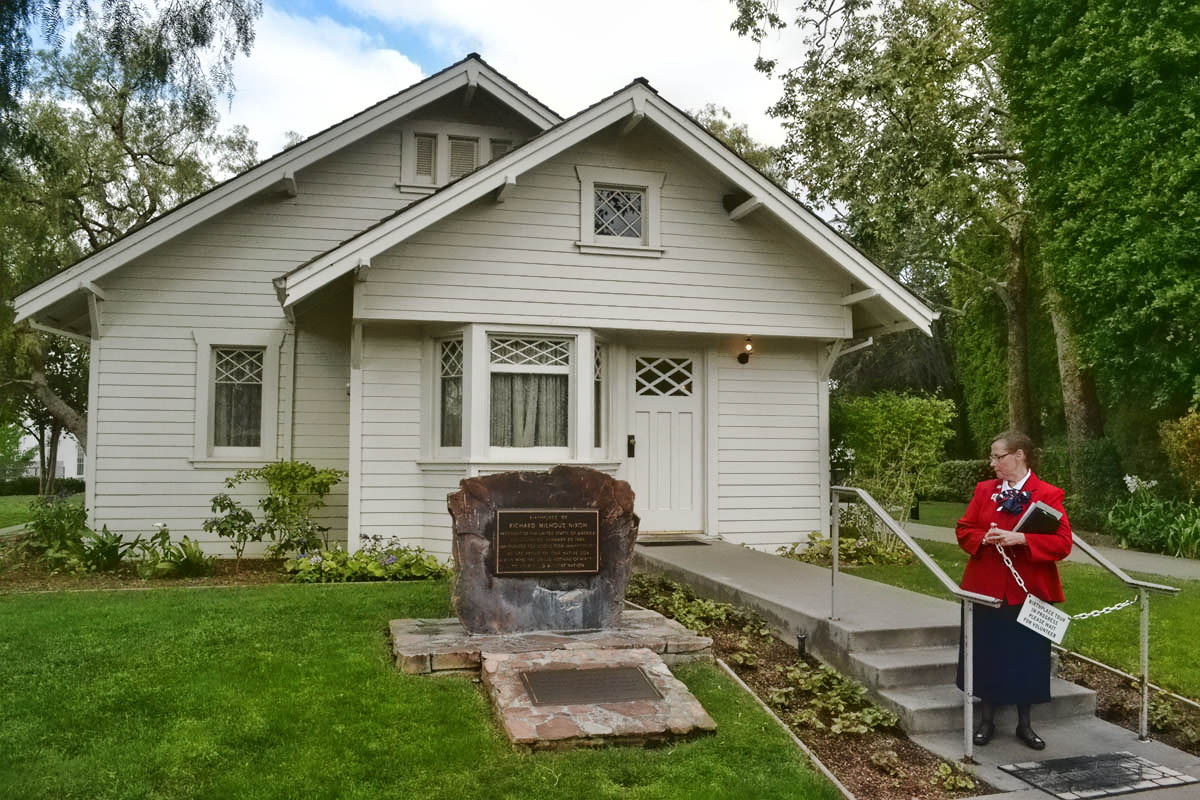 The original Nixon family home was constructed in 1913. 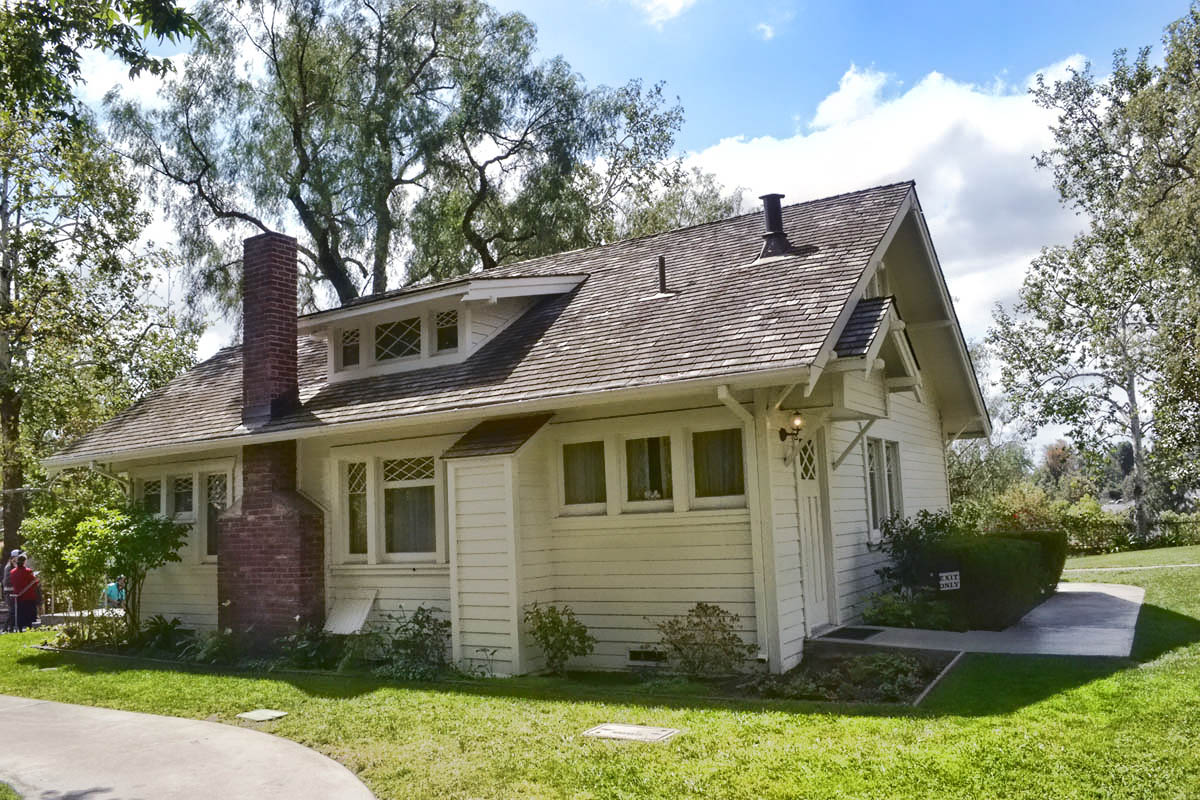 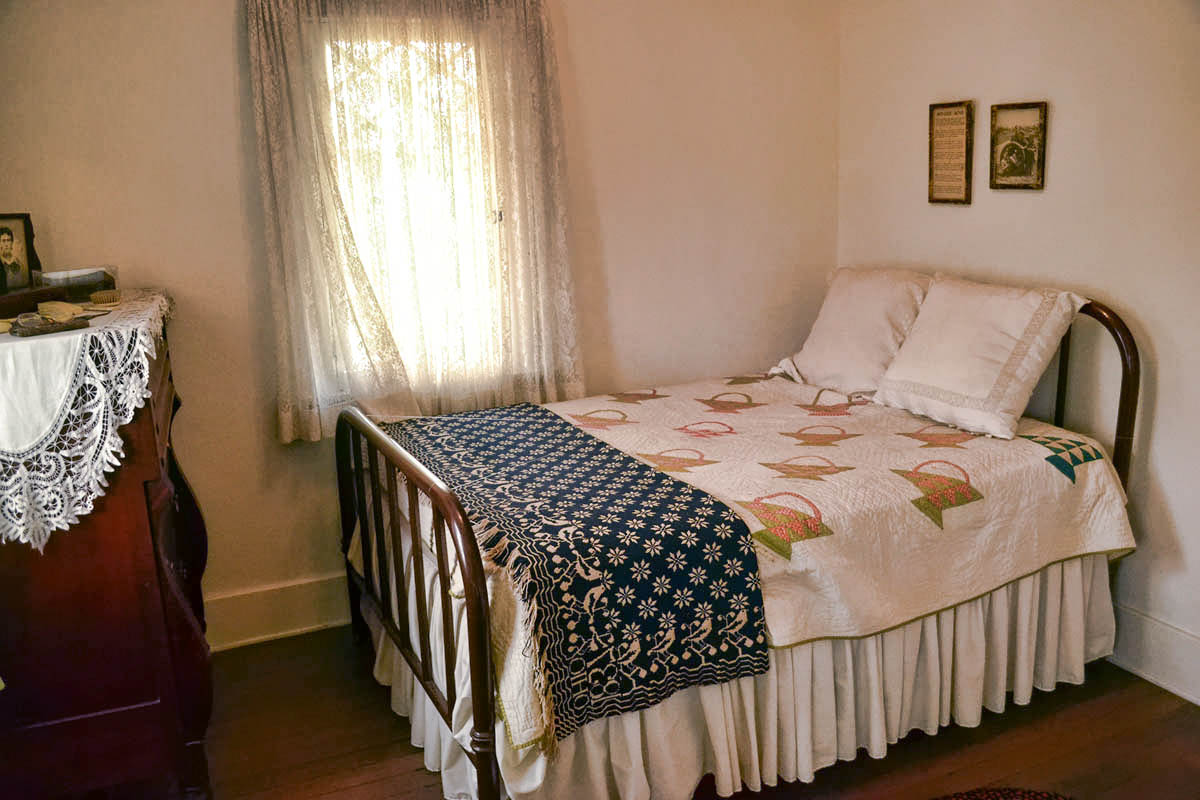 The Former President was born here. 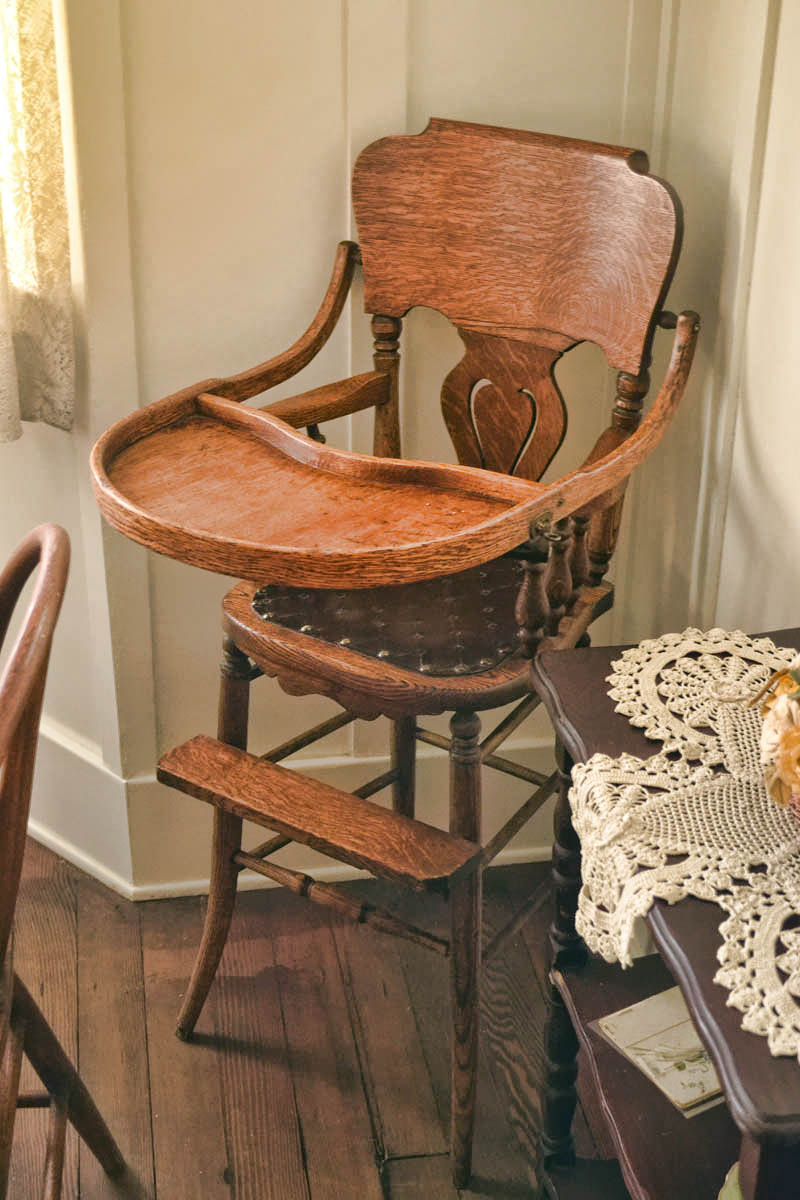 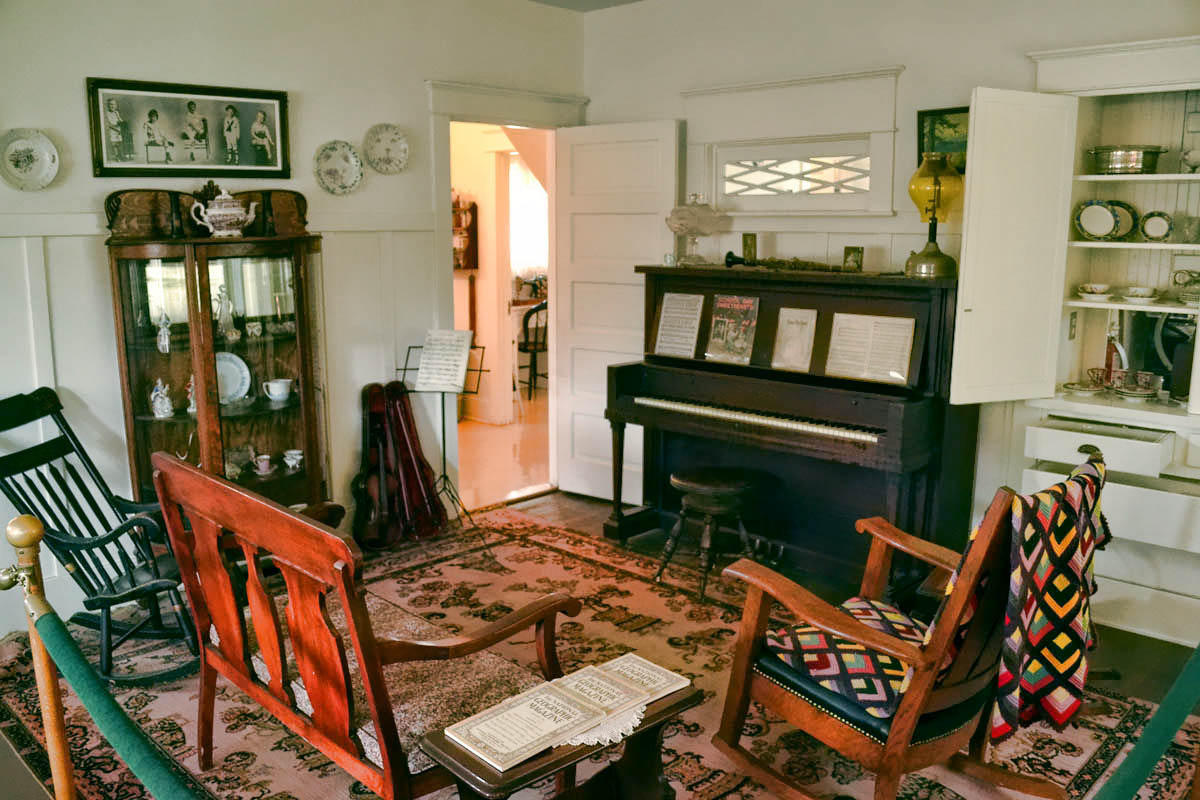 I had forgotten he played the piano, but also played four other instruments as well. 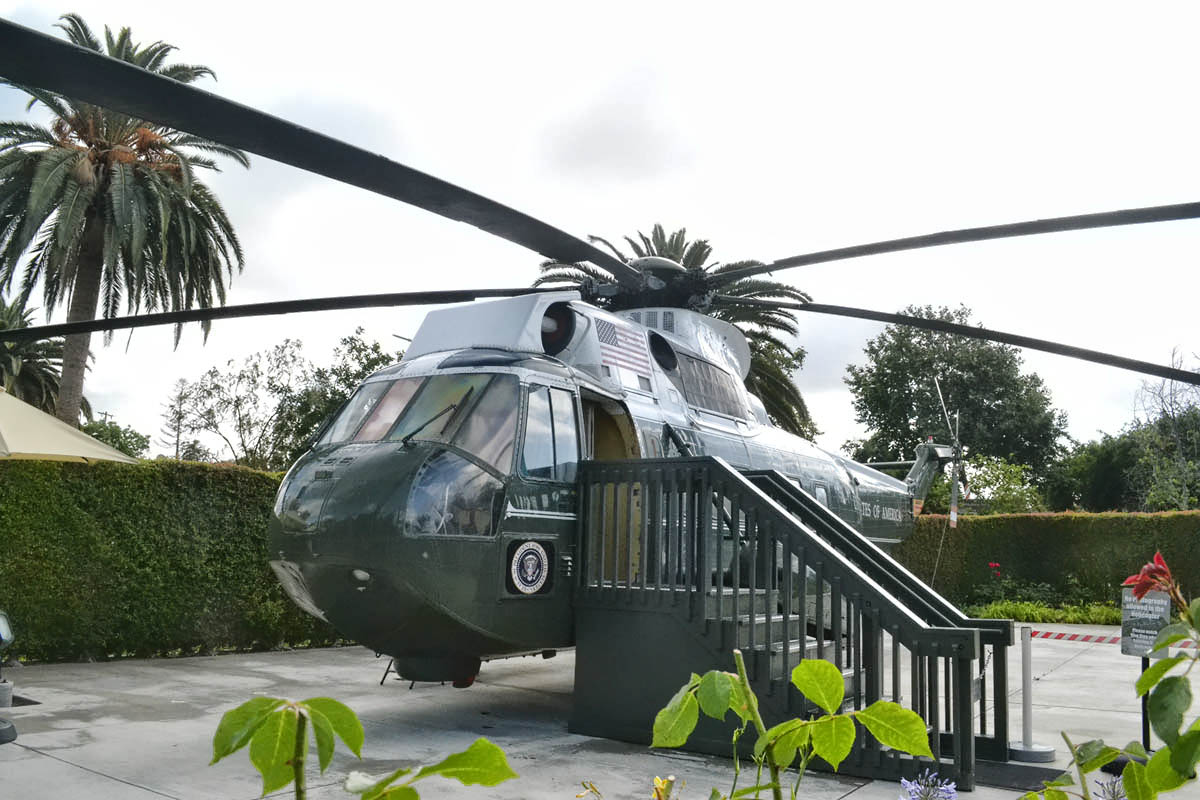 Marine One, in Presidential service from 1969 to 1976, serving Kennedy, Johnson, Nixon, and Ford 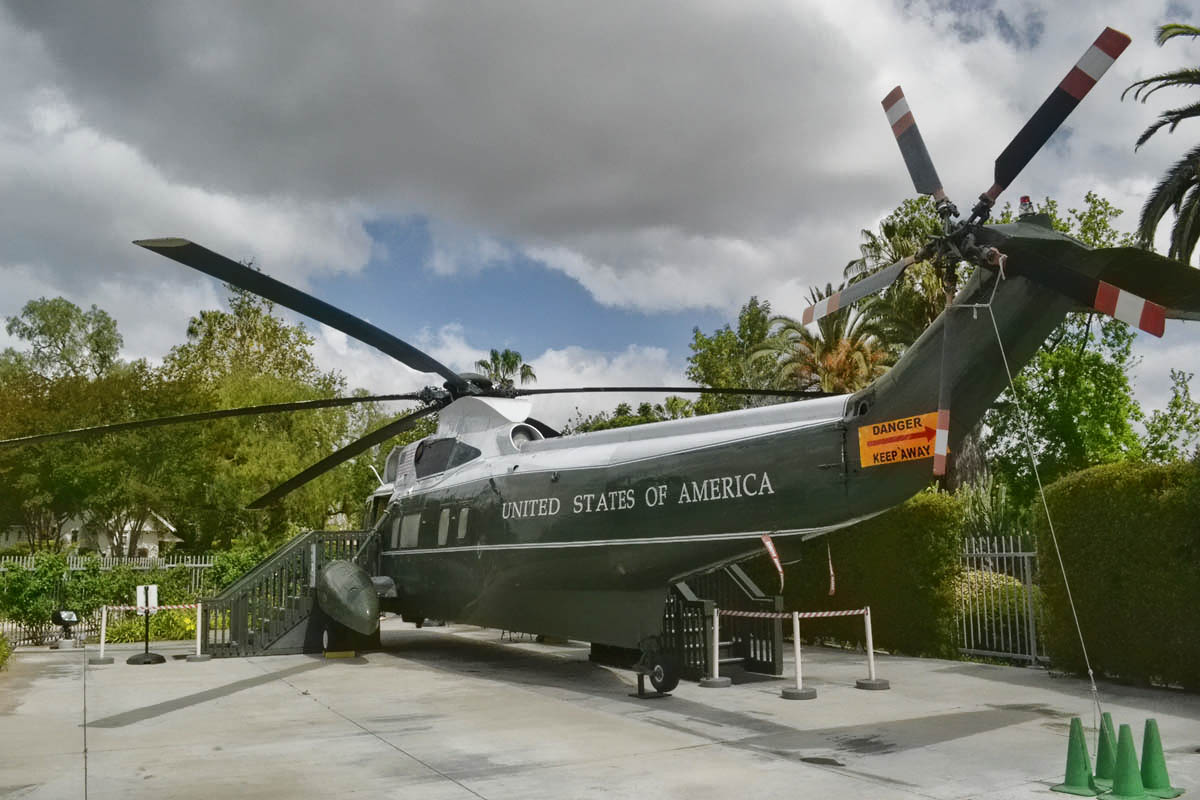 The helicopter few many important missions as far away as the pyramids of Egypt, but none more famous than the “final flight” when the Nixon family left the White House after resignation, bound for Andrews AFB. 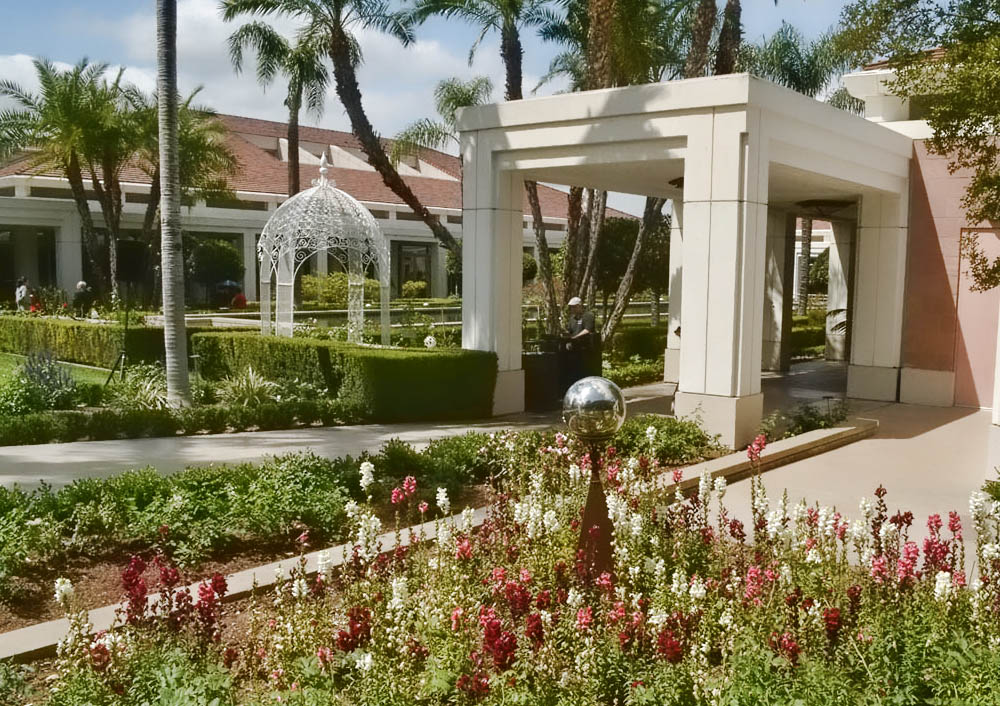 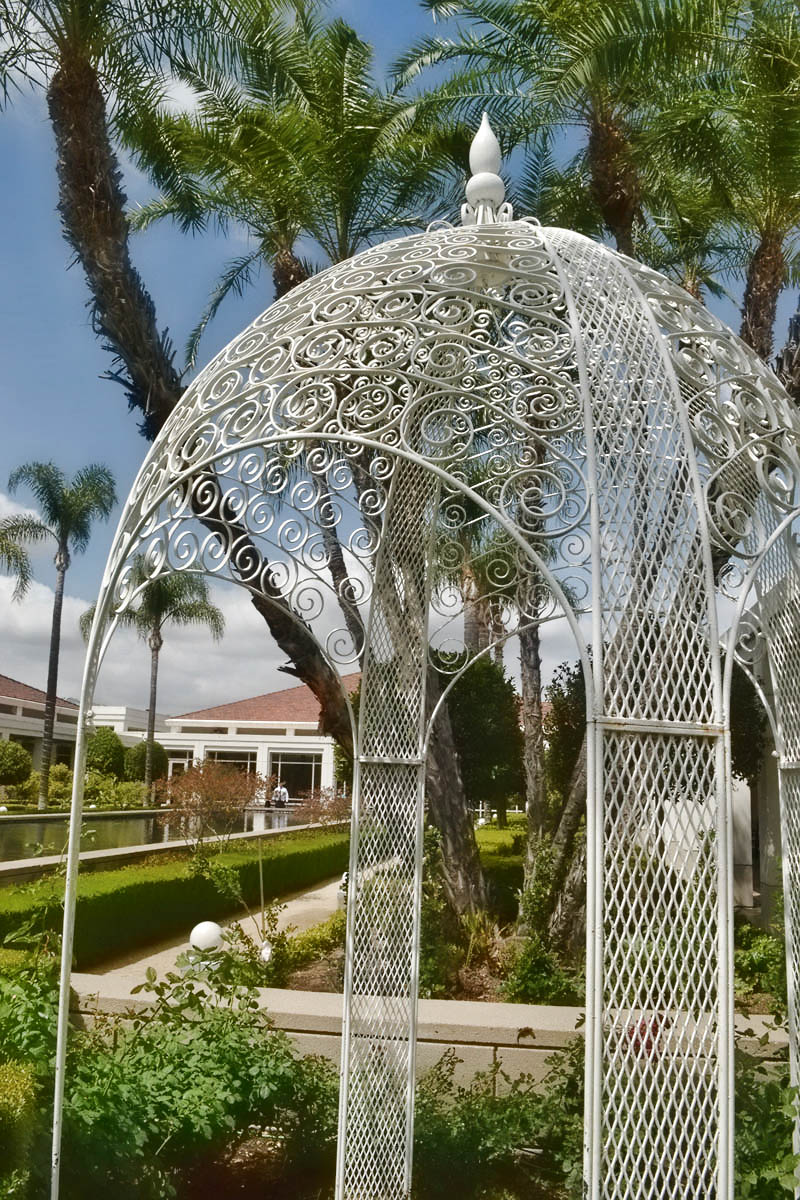 This gazebo was used for Tricia Nixon’s wedding in the first ever White House Rose Garden. 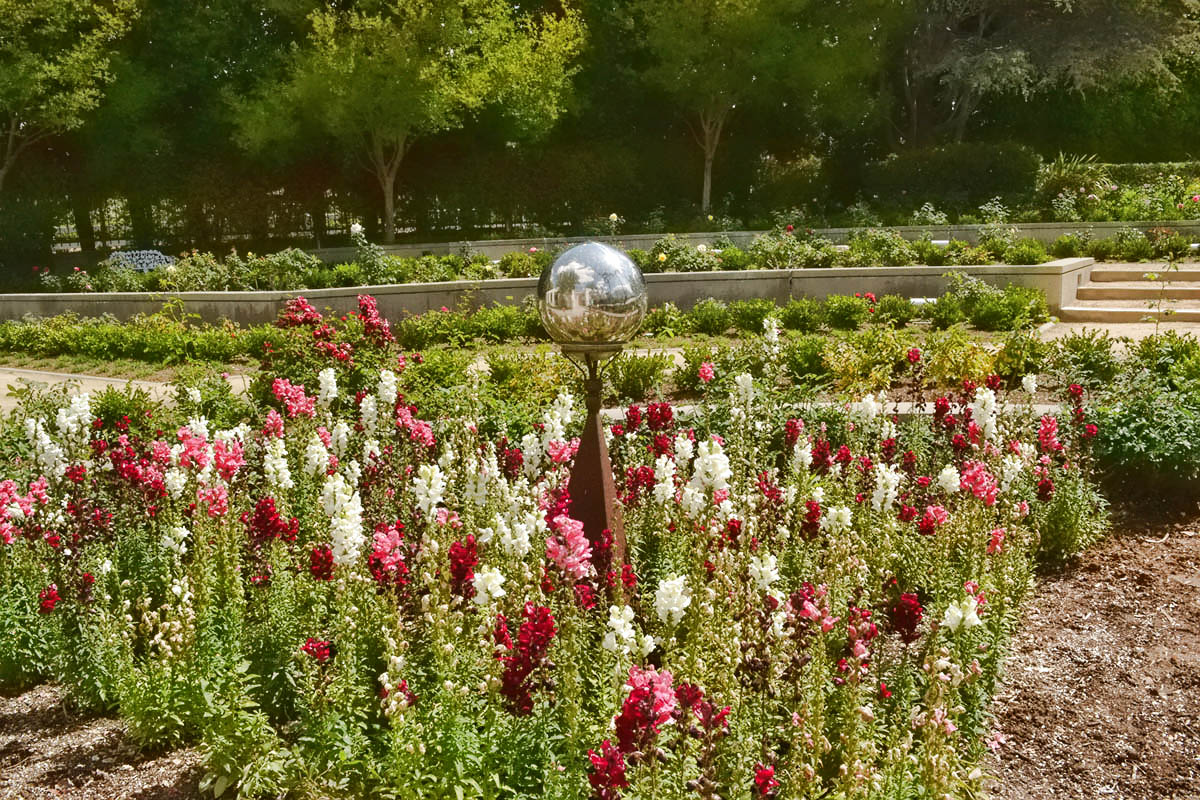 Pat Nixon’s rose garden, only no roses, only bushes and other flowers. 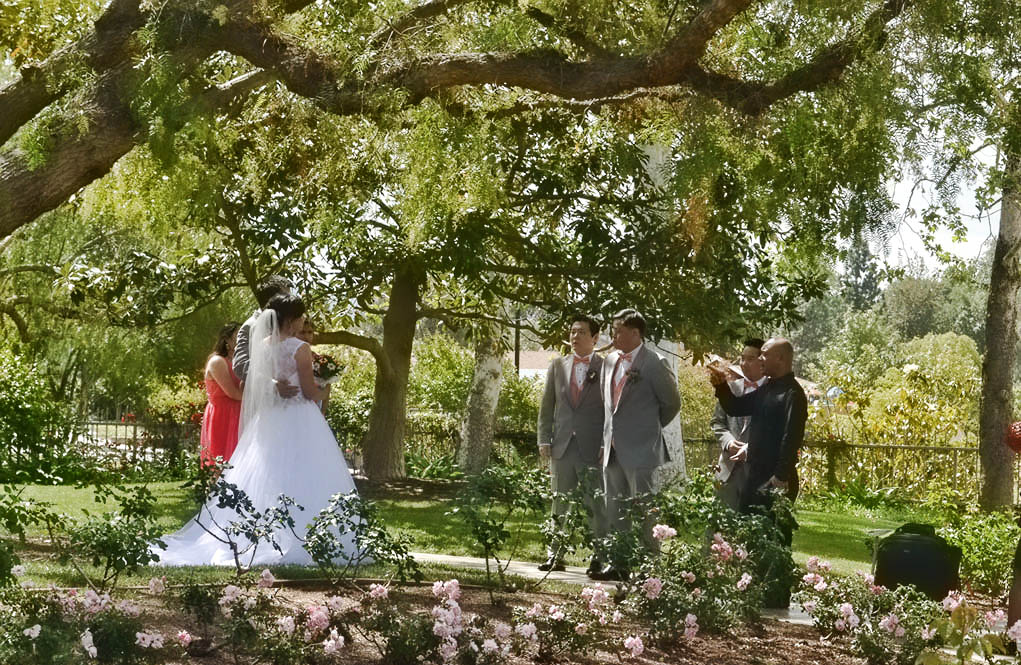 The grounds and East Room are available for weddings and other events. 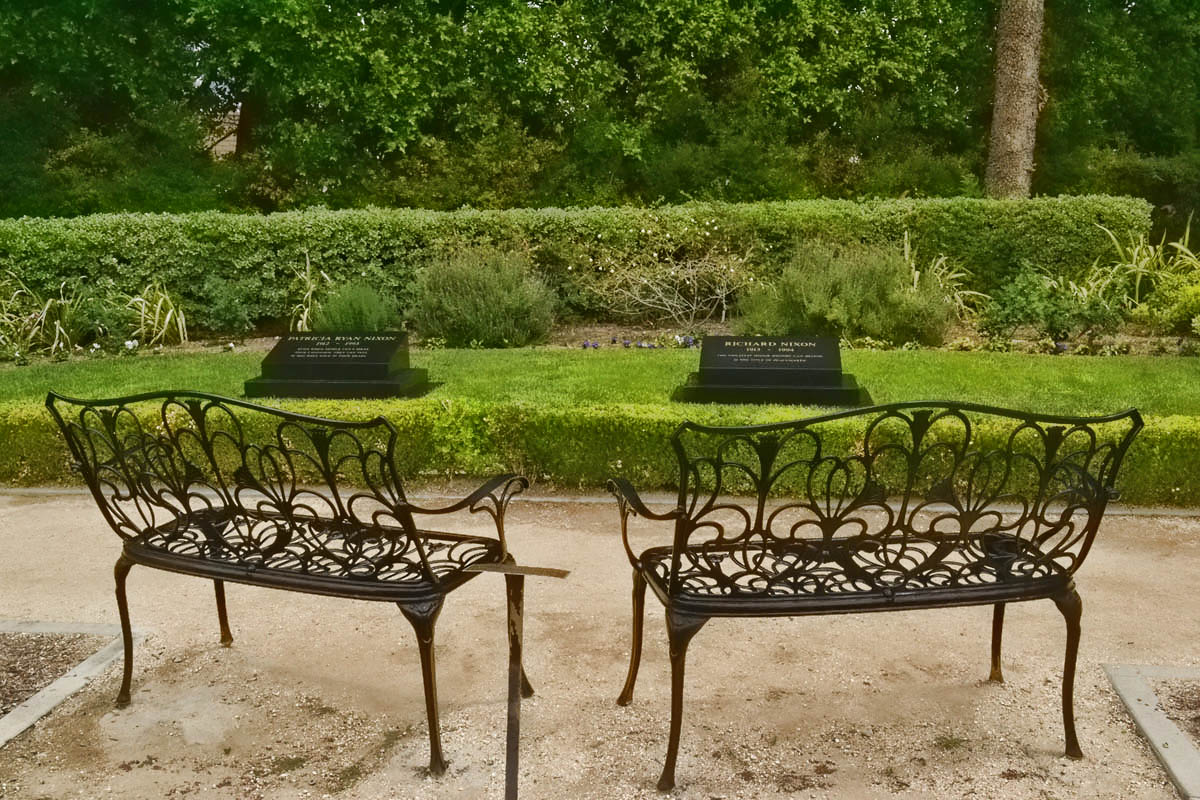 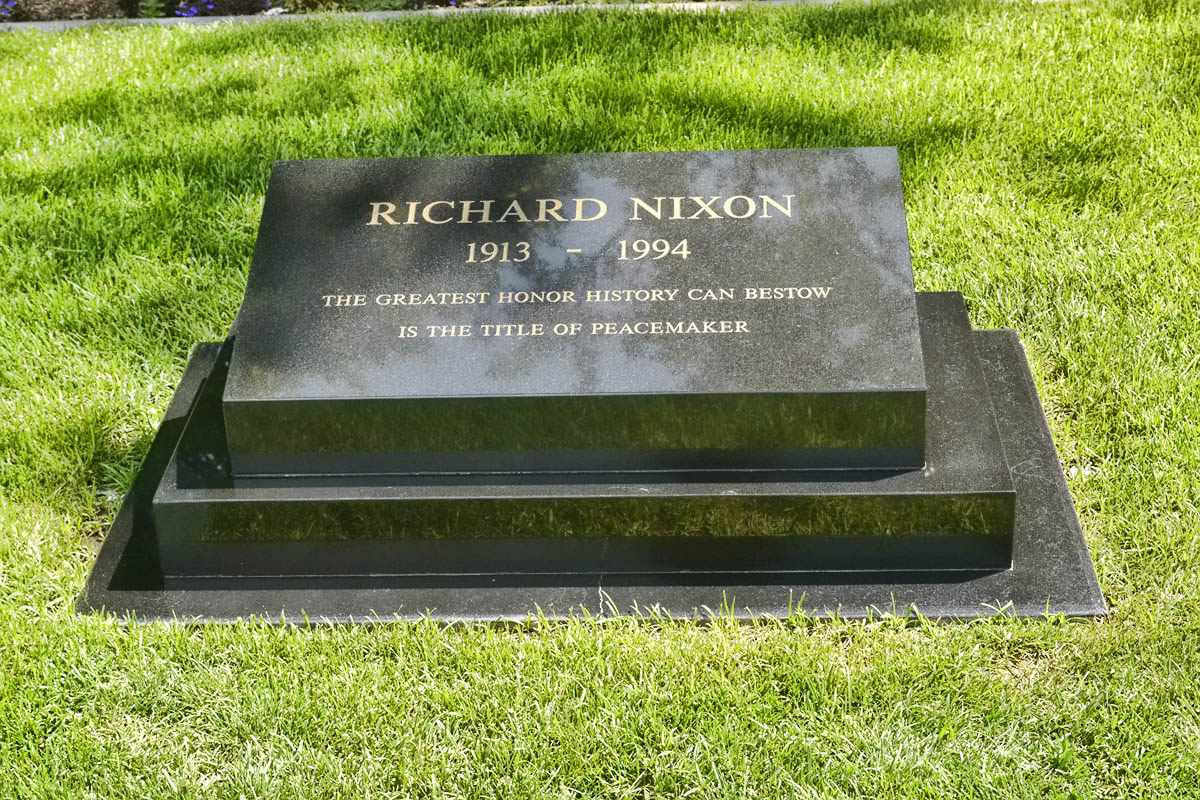 7 thoughts on “Putting Politics Aside for History”