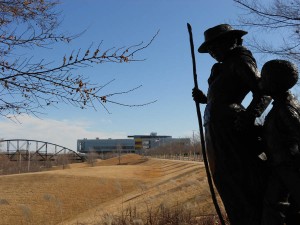 Those who know me, know that I am a not-so-closet Bill Clinton fan.  In fact I stop just short of an “I MISS BILL” bumper sticker on my car and stalking him through the back alleys of earthquake-stricken Haiti.  So when I ended up with a few extra days off at the end of 2011, I figured it was the perfect time to make my long anticipated “Billgrimage” to the Clinton Presidential Center. I wanted to go while he was still living because to visit posthumously would be…well… just too sad.

Mapquest says Little Rock is a 5 hour drive from Dallas which meant more like 7 hours for me, as I missed the opportunity to circumvent downtown Dallas.  One would think after a 900 mile drive to relocate from Atlanta to Texas, I would have had enough of the highway for a while, but it felt good to be on the road again. 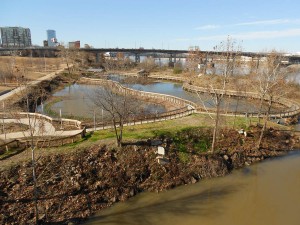 The downtown area of Little Rock, which flanks the banks of the Arkansas River, seems to be amidst a resurgence, so there is no better place to stay while exploring the riverside than the Marriott Courtyard Downtown.  Right across from the River Market, mere steps from great restaurants and bars, and adjacent to a cool little Museum store, it was a hub of activity.  It is only a 10 minute walk to the library along the riverside park.  There are 14 miles of walking trails along this park, pretty in shades of brown — I can only imagine what it looks like in the spring green. 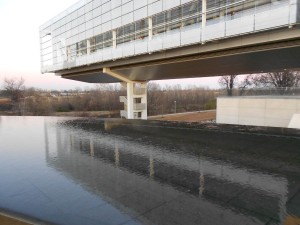 Clinton’s vision for the Center was supposedly “A Bridge to the 21st Century” in the modernist style, but it looks a little bit more along the lines of a trailer house along the river to me.  There are two ways to guide visitors through the center.   First there is the audio guide narrated by Bill himself, which offers insight into the exhibits along with trivia about his life and years in office.  Alternatively, you can take the tours given by the volunteers which cover more in-depth descriptions of the construction of the center, including sustainability, use of recycled materials, and the river reclamation project.  The center was the first federal building to earn a “Platinum” green rating. 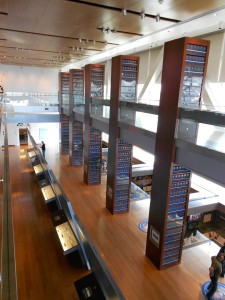 The main floor of the museum is a series of alcoves like small “libraries” divided by floor to ceiling columnar bookcases containing 5,000 archival boxes bearing the Presidential seal.  These 28 ft columns contain only  8% of the documents from the administration.  Each of the policy alcoves highlights a different issue that the former president dealt with during his administration.  Down the center of the hall is a timeline of historical events that occurred during his two terms.  And yes, in case you are wondering, the impeachment is covered there too. 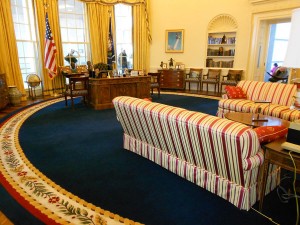 The upper floor contains a more personal look at life in the White House including all elements of a State Dinner, gifts from other Heads of State, holidays in the White House, and even a few of Bill’s saxophones on display.   Moving toward the exit leads visitors by an exact replica of the Oval Office during the Clinton administration. 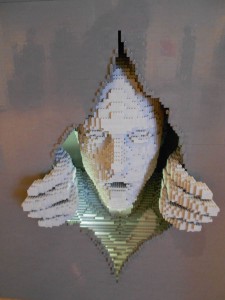 Last stop on the tour are the temporary exhibits which happened to feature “LEGO” during my visit.  The sculptures created with these tiny plastic blocks were nothing short of incredible, offering optical stimulation the likes of a 3D M.C. Escher drawing.

I would not have thought it was possible for me to spend five hours in this museum but I did, and could have used another half an hour.  My interest in politics came later in life, and I have to say, it was Bill’s ability to turn a phrase that first drew me in.  My admiration only continues to grow as I follow the initiatives of his global foundation’s pursuit for clean water resources, malaria eradication, treatment of HIV/AIDS, and climate awareness.  Regardless of political affiliation, you have to agree he has had a monumental impact in the underdeveloped and underprivileged countries of our planet.

There were lots of gastronomical delights to be experienced during my downtown stay.  Highlights included the “Flying Fish,” better known as the “Billy Bass Adoption Center” where I am ashamed to admit I ordered a menu item called the “Hog Wallow Fry,” in spite of the name.  It was a succulent basket filled with fried catfish, shrimp and oysters, which left a lasting impression of freshness and hot crispy goodness. 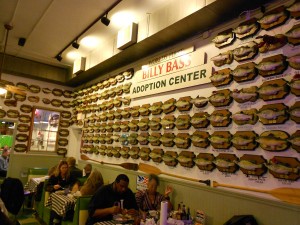 But no visit to Little Rock is complete without a visit to “Doe’s Eat Place,” a hole-in-the-wall downtown landmark which rose to prominence during the 1992 Clinton campaign, even serving as the location for Bill’s “Rolling Stone” magazine interview.  The walls are lined with pictures of the Clintons, but the real attractions here are the gargantuan T-bone and Porterhouse steaks, served family style. 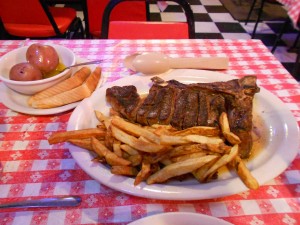 Perhaps this is what led to the downfall of my gallbladder a week later? Regardless, how could one regret such a meal?

The city of Little Rock was definitely worthy of a weekend visit.  Perhaps even longer were it not for all the red Razorback hog heads everywhere! 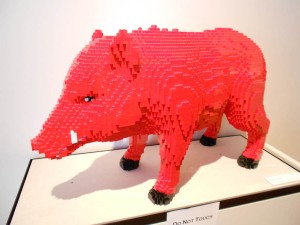