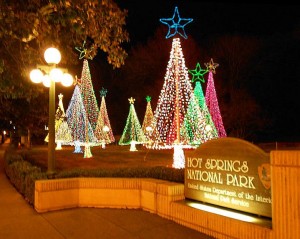 Traveling to Arkansas over the New Year holiday afforded me three milestones – visiting a state I had never been to before, seeing the Clinton Presidential Center, and crossing off another one of our great National Parks! After a couple of days enjoying downtown Little Rock, I made the hour drive toward Hot Springs. 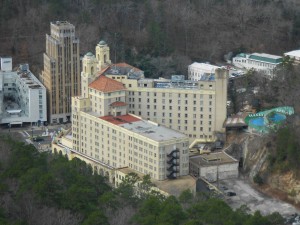 My desire to keep with the “Gilded Age” period as much as possible led me to the old historic Arlington Resort Hotel and Spa across the street from the Hot Springs National Park. The hotel was built in 1875, destroyed by a fire, and later reopened on New Year’s Eve, 1924, so it seemed like the perfect venue to see in the New Year. The hotel was more than a bit worn around the edges, but steeped with so much character and charm that more than made up for the peeling paint and gaudy decor. It was like something out of a movie set with its 12 ft ceilings, louvered doors for cross-ventilation, and wide hallways with magnolia print carpeting. The grandiose ballroom and Venetian dining room with arched windows, heavy drapes, and gilded chandeliers were a real throwback to the 1920’s, with Al Capone’s suite right down the hall from me. I’d like to attribute the lights flickering off and on at night to the lore that Capone’s ghost still walked the hallowed halls, however the rush of icy cold water in the shower each time my neighbor flushed the toilet was assurance that the electricity and plumbing were as “authentic” as the décor.

Right across the street from the hotel was the Hot Springs National Park, one of the only national parks located in an urban center because the town grew around the original springs. Encompassing just the 47 springs and “Bathhouse Row,” a street lined with eight bathhouses from the turn of the century, Hot Springs NP is the smallest of our national parks. Once referred to as the “Valley of the Vapors” by the Native Americans, this natural phenomena soon spread as tales of folklore touted the medicinal value of the waters, turning the springs into a turn of the century tourist attraction. Many of the prescribed treatments called for 3 weeks of rehabilitation, making prolonged stays in the springs area common. During their heyday, there were eight beautifully elaborate bathhouses, some Victorian, but mostly with Spanish motif, offering all types of services from grooming and massage to electrotherapy. The bathhouses not only served as healing centers, but also as social areas often including a music room, gymnasium, and bowling alley. But sadly with the evolution of midcentury “modern medicine,” the treatments were debunked, which eventually led to the demise of all but two bathhouses still in service today. 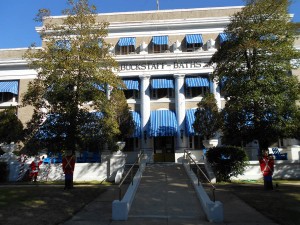 I decided to sample not only the spa services in the Arlington Hotel, but also compare and contrast “the old and the new” along Bathhouse Row. My first stop was the Buckstaff, the only continuously operating bathhouse since 1916. Since they do not accept reservations, I made this my first stop before the New Years crowds started pouring in. Their “Traditional Bathing Package,” supposedly unchanged from the original services offered in the 1920’s, is a 90 minute treatment beginning with a 20 minute soak in a huge old iron claw-foot tub with a whirlpool machine resembling a small outboard motor. If the threat of 143 degree water coming out of the hot spigot is not enough to keep you alert, surely the rickety old electric motor submerged at your feet will! Next came the Sitz bath where I submerged my pear-shaped self into a tiled tub with my feet and arms extended while I sat for another 10 minutes in angst over how to extract myself without a hoist. Next up was the old fashioned steam box, but they don’t leave you too long lest you end up shriveled like I Love Lucy who steamed for an entire day to lose weight for a gig at the Copa with Ricky.  From the steam box, it’s on to the “hot packs” where all extremities are securely wrapped like a mummy in towels soaked in the steaming thermal waters; the yin and yang balanced with an iced cold towel to the forehead.  After being unwound, it is off to the “needle shower” with needle-prick shower jets pelting from all directions.  Bound tightly in a bedsheet, the final stop is the massage table for twenty minutes of pummeling and pounding.  So nice, I did it twice! 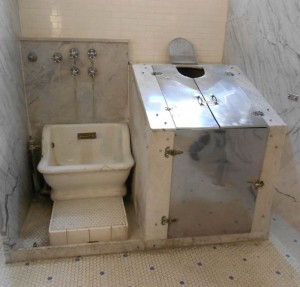 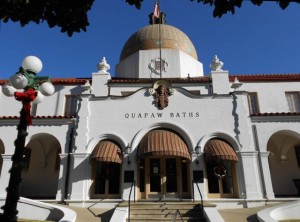 The other operational bathhouse, the Quapaw Baths and Spa was recently renovated, and offers a more modern bathing experience. I opted for the “Sugar and Spice Special,” which included 100 minutes of aromatherapy soak, facial, food scrub, and massage. The facilities were beautiful and service was superb, with plump terry bathrobes and slippers and zen-like music piped in. A lovely experience, indeed, but nowhere near as memorable as the assembly line routine, institutional atmosphere, and militant bath attendants at the Buckstaff.

The Fordyce Bathhouse, built in 1915, the most luxurious of the bathhouses is now the Park Headquarters. This beautiful three-story building has been fully restored to its original grandeur as a museum, with stained glass ceilings and meticulously designed tile floors. I found the exhibits so fascinating that I took both the free tour led by the Park Ranger, as well as the self-guided tour, visiting all three floors twice. 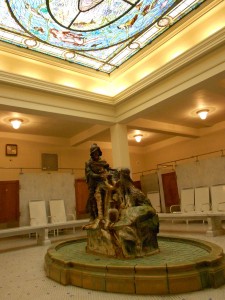 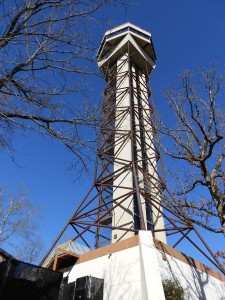 There is plenty to enjoy outdoors in the park as well as indoors. In keeping with the health and wellness theme, there are lots of walking and hiking trails, beginning with the beautiful upper promenade above Bathhouse Row, all the way up to the Hot Springs Mountain Tower which offers beautiful vistas of the town and nearby Ouachita Mountains from the observation tower. 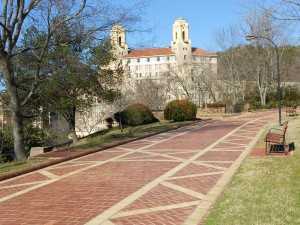 I really enjoyed my visit to Hot Springs, and wondered why it had not yet been “discovered” by the wellness craze, overrun with yoga studios, vegan restaurants, and meditation centers. But then watching the cops haul off the bearded boys in overalls, not once but twice, made me realize that Hot Springs culture was more conducive to a whole different type of “Moment of Zen.”

1 thought on “Taking of the Waters”