I always had a soft spot for the Reagans, but not for reasons one might think. Back in the early days, my Mom and Dad both bore a striking resemblance. Their heights and weight were an exact match to the Reagans. Dad had thick wavy brown hair and could fill out a suit and tie with panache, while Mom had the 80’s “brown football helmet hair,” complete with “wiglet,” and looked like a Talbot’s model in her double knit dresses. During Reagan’s heyday, I was working for Braniff International Airlines. Not only could I fly anywhere system-wide in First Class for less than the cost of admission to the Reagan Library, I could also bring my family along. But flying “non-rev” meant we had to dress up for the flights. I used to call my parents “Ron and Nancy,” as we would sit across the aisle and toast our free first class cocktails. Aaahh, those eighties “Glory Days.”

Visiting the Ronald Reagan Library in Simi Valley was the complete opposite experience from the Nixon Library, separated by just 80 short miles across LA. I visited the Nixon Library on a Saturday morning, concerned whether there would be a place to park my rig as I stopped on my way around LA. The parking lot was empty, even with a wedding in progress. I arrived at the Reagan Library on a Monday morning expecting to find another empty parking lot. But all lots were already full, with instructions to “park along the curb and use Shuttle Service.” Shuttle Service? Thank goodness this visit, I had only the Tracker to park.

Admission to the Library and Museum is a whopping $29.00, as compared to the “construction discount price” of $4.25 at the Nixon Library. The Audio tour is an additional $7! I quizzed the woman at the ticket desk about various discounts. As I ran through my list of scenarios, she offered what sounded like the “Paris discount” Maybe “parents?” for $24.00. Neither a Parisian nor a parent, I will still take it! I opted to skip the $7 optional audio tour.

The museum itself was like no other Presidential Library I have ever visited. There was some sort of interactive display or media presentation at every exhibit, almost with a Disneyland flair.

The first phase of the tour begins with the “Hollywood Years” where visitors have an opportunity to sit in front of the “green screen” and make a video of themselves emulating the role of “The Great Communicator.” There are different scripts to choose for your screen test; broadcasting the General Electric Theatre Show, or reading lines from one of his movies. The video can then be viewed in playback on the big screen.

Other exhibits include reading his inauguration speech from actual teleprompters, interactive screens to design your own Presidential China, and even an “Etiquette Test” to score yourself from protocol to the proper place setting. Upon entering the Air Force One Pavilion, professional photographers stand at the ready to take souvenir photos as you board the aircraft or Marine One. Packages are available for purchase, or you can settle for the single snapshot for $14.95. uuuummmm….no.

Sound effects, lighting, and staging are used extensively; the sound of barking dogs on the other side of the Berlin Wall. Bright red lights, giant multi-media screen, and ammo crates as seating for the Communism exhibit. Even half of a horse that you can straddle for a photo op, “Riding with Reagan.”

But none of the exhibits are so dramatic and evocative as the final scene. The visitor winds through multiple media rooms depicting the “final days,” from the Alzheimer speech, “I now begin the journey that will lead me into the sunset of my life,” to the presentation of the folded flag at sunset over Simi Valley. The music, the speeches given by his children, the choir singing Amazing Grace are enough to cause one to almost feel grief for the passing of a 93 year old man who no longer had his faculties. 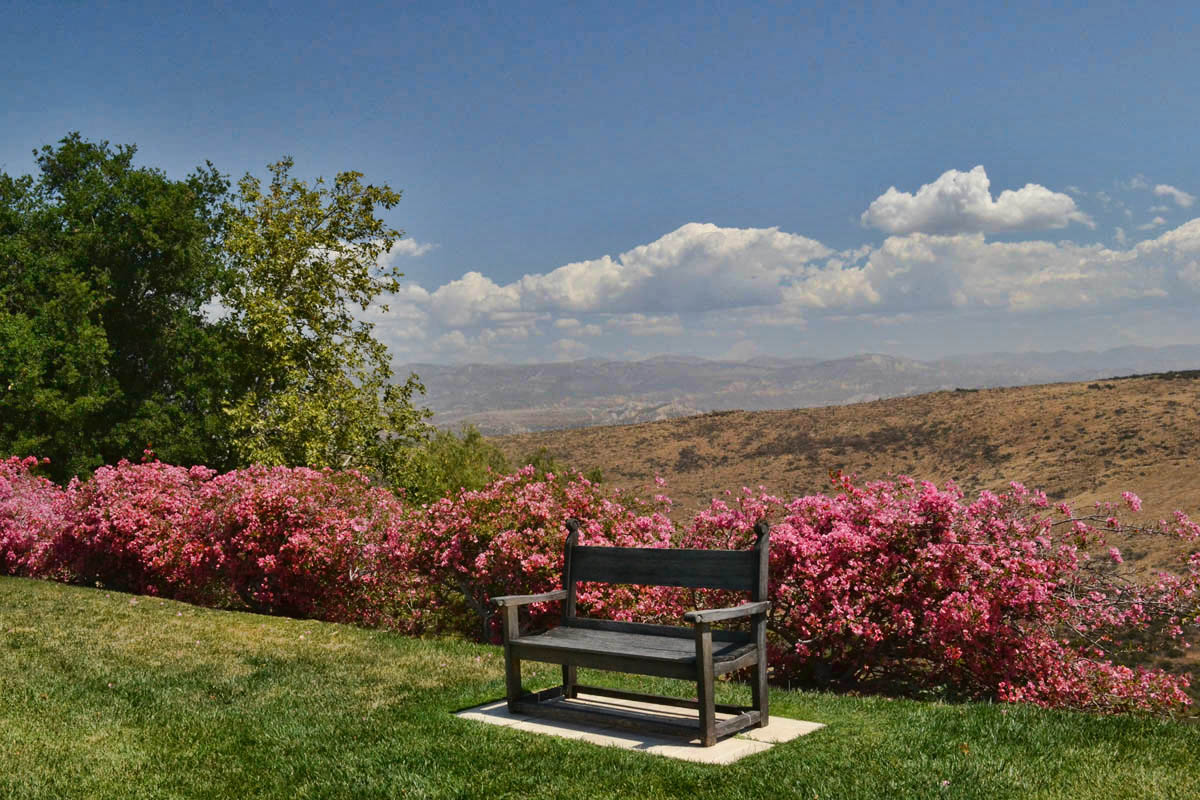 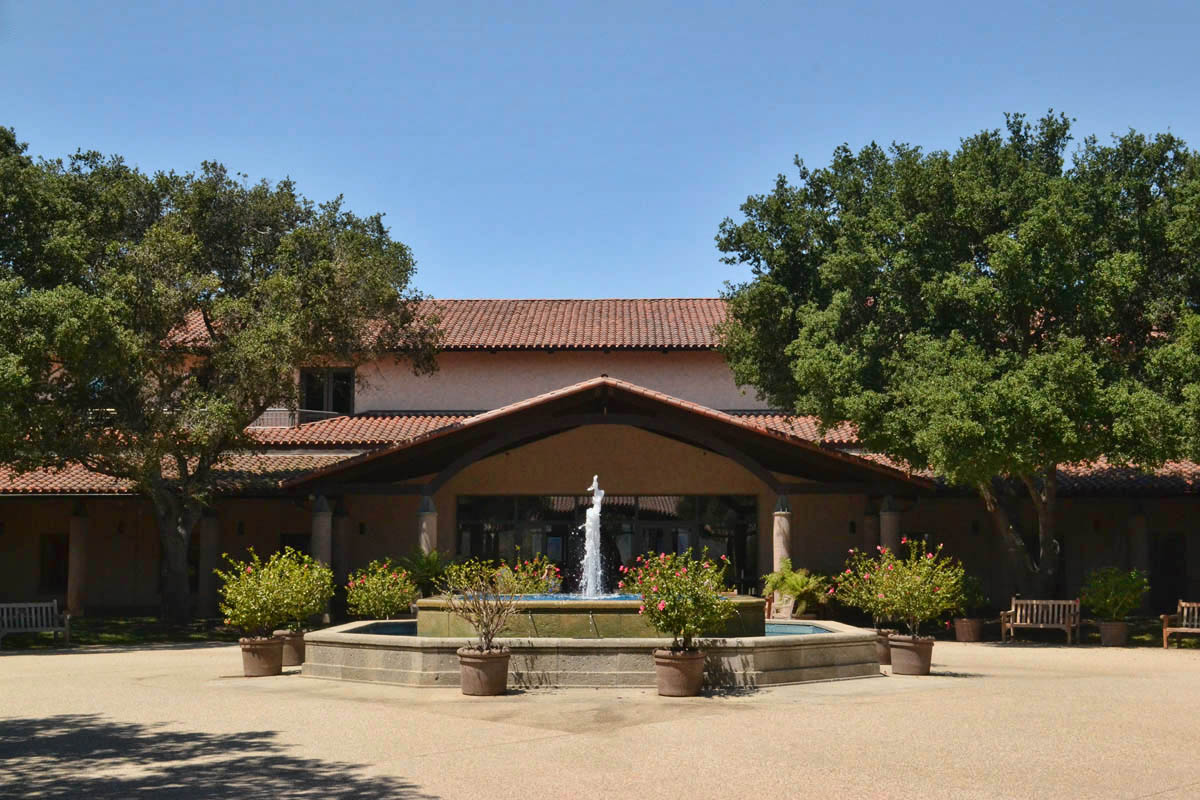 Library and museum looks like a sprawling multimillion dollar ranch. 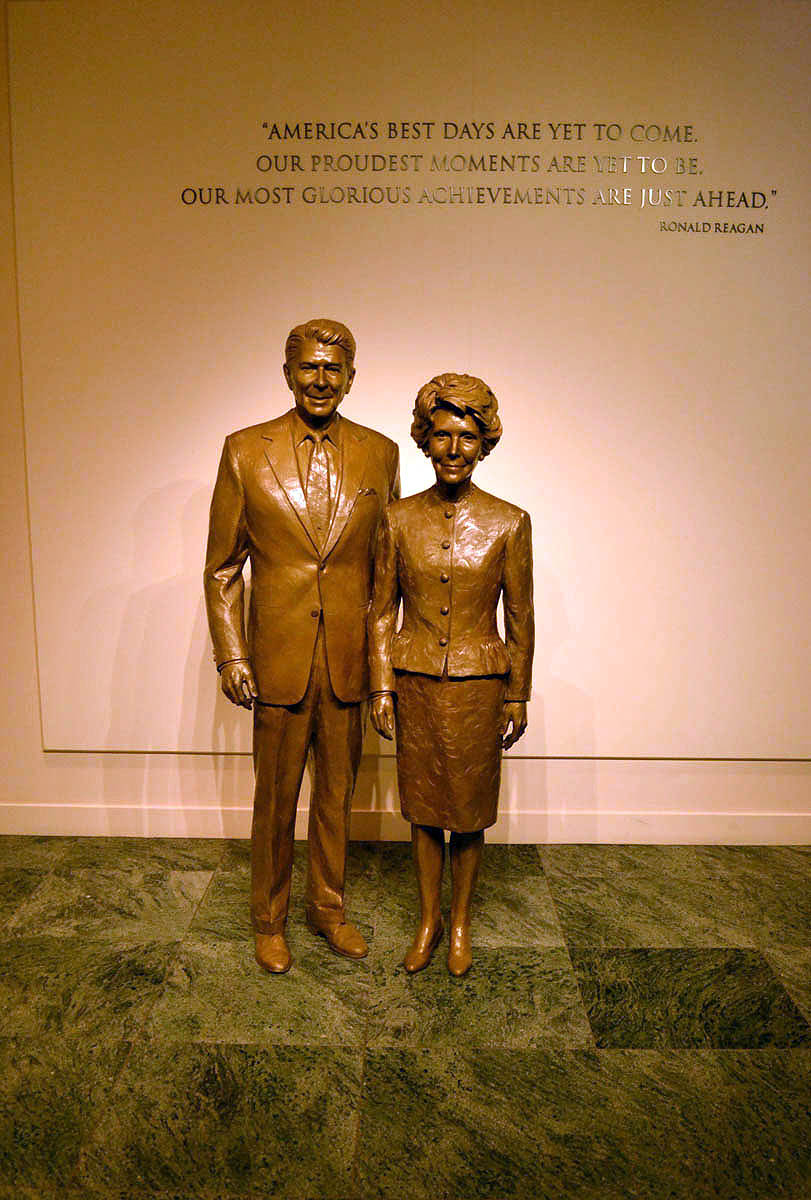 Life-size statues of Ron and Nancy at the entrance. 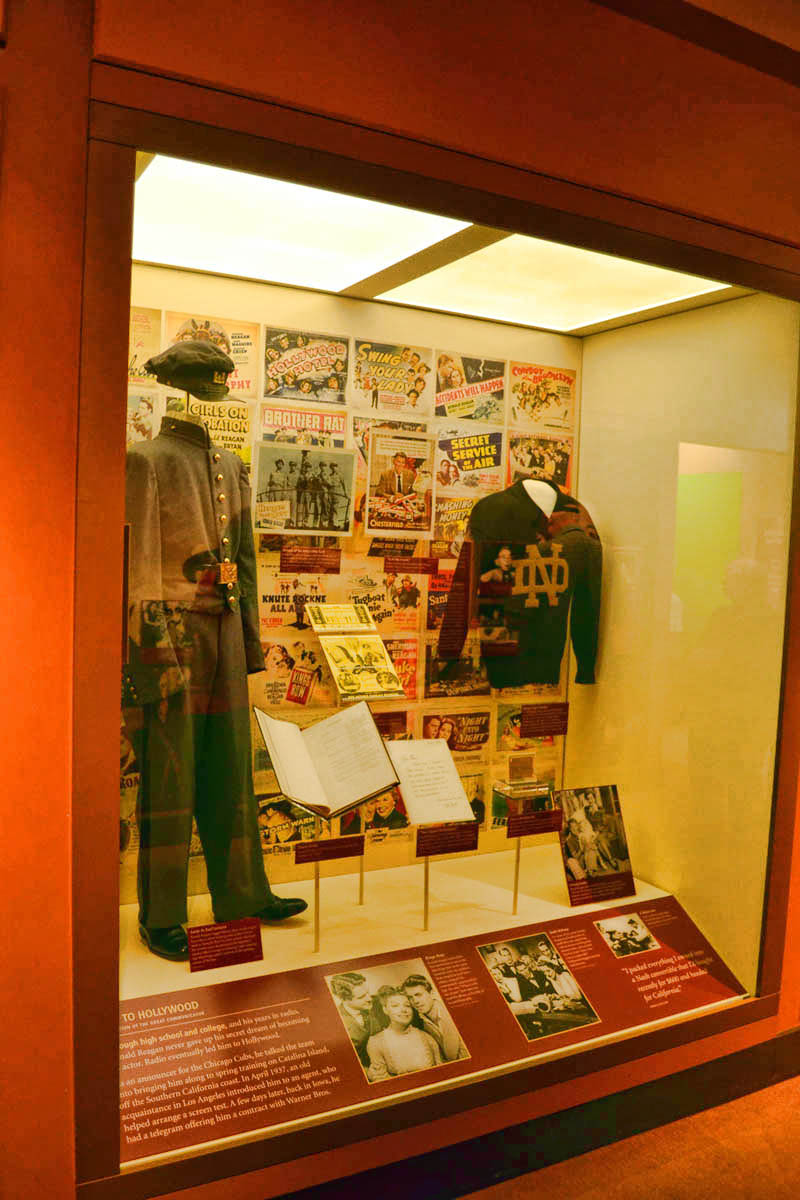 First section of the museum is all about the Hollywood days. On the left is Reagan’s war uniform from a movie, and on the right is “The Gipper’s” sweater. 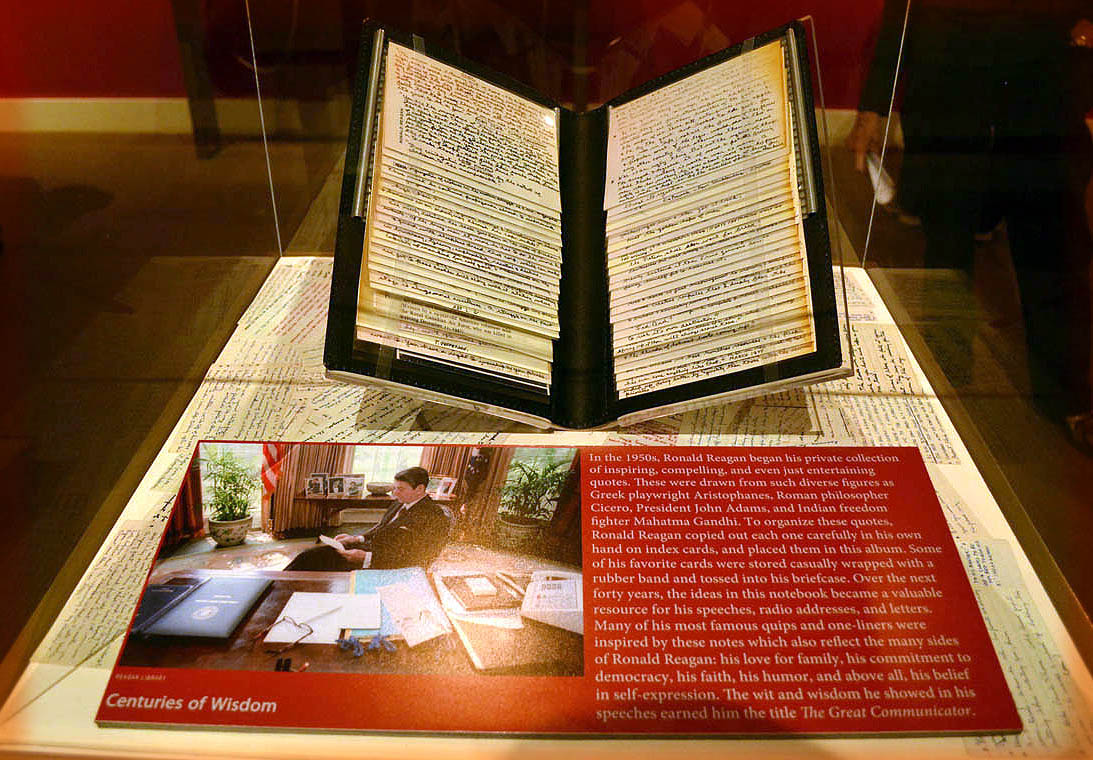 Reagan was a big fan of quotes, and kept a book filled with index cards of quotes. 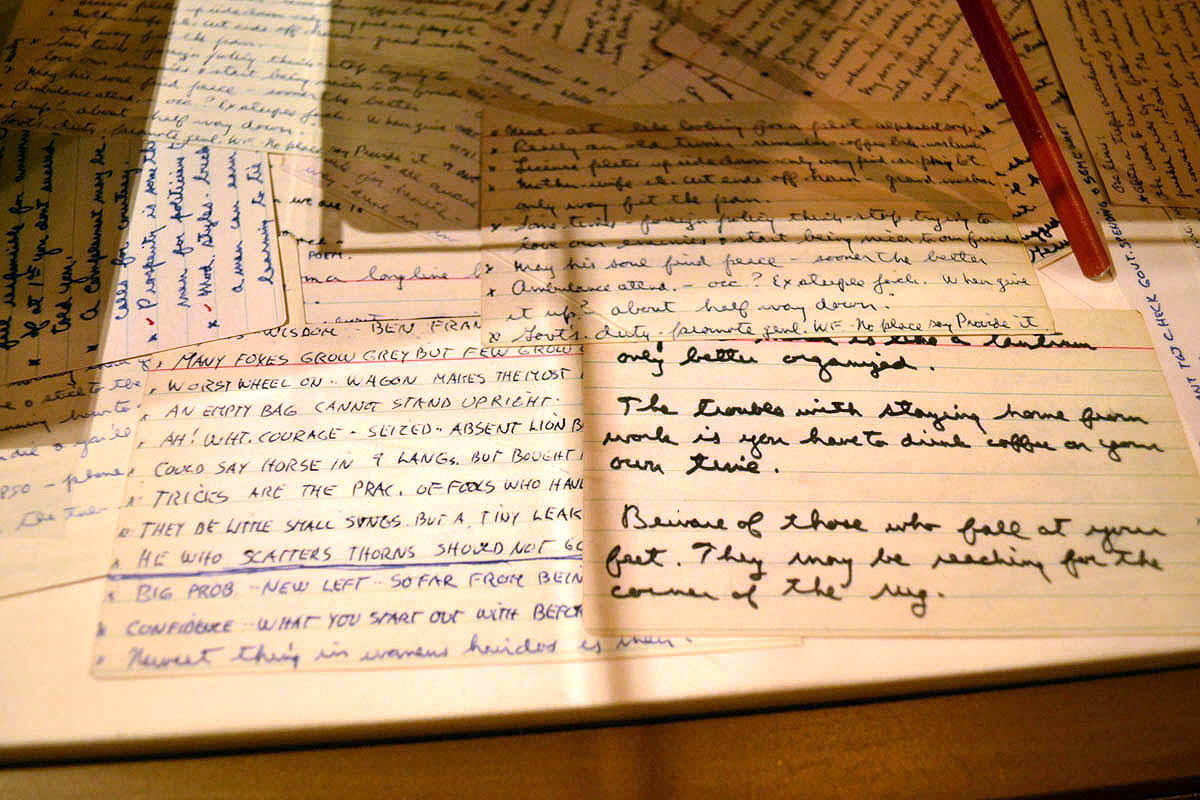 “Beware of those who fall at your feet. They may be reaching for the corner of the rug.” 😉 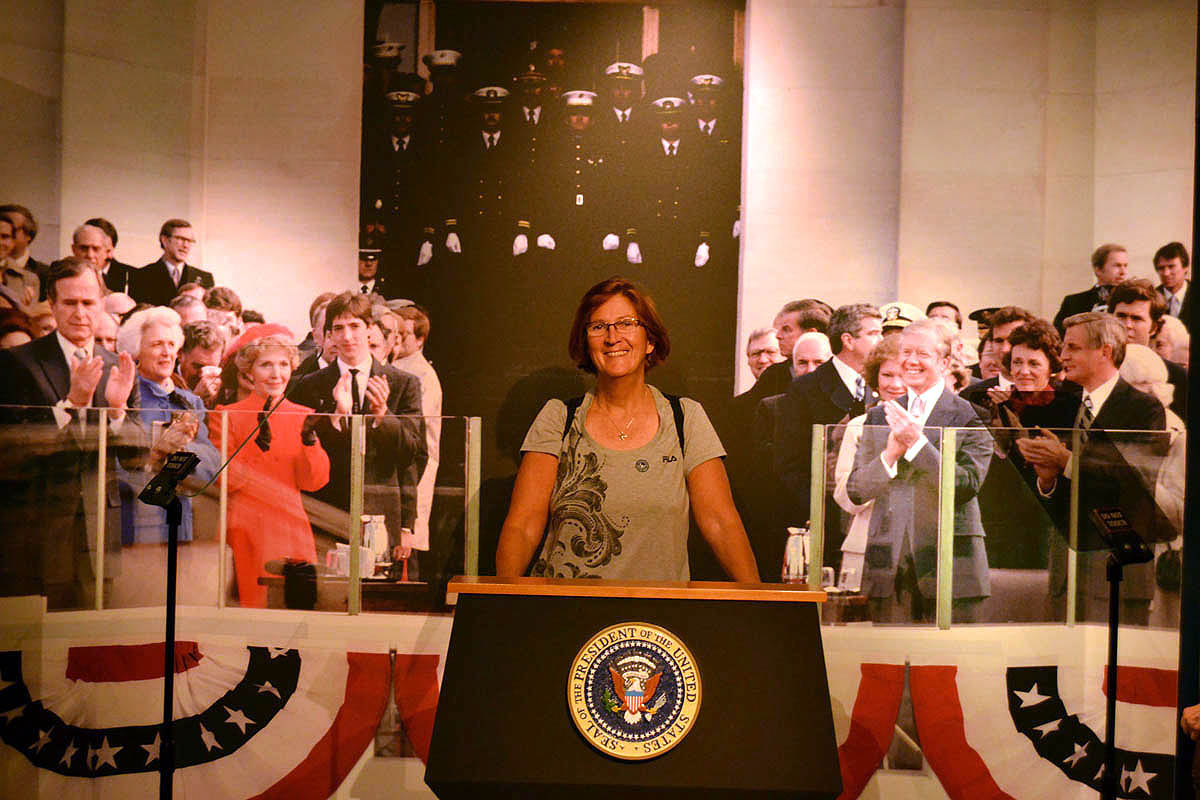 “My fellow Americans…” Yes, I give a great speech, but not without my teleprompter. 😉 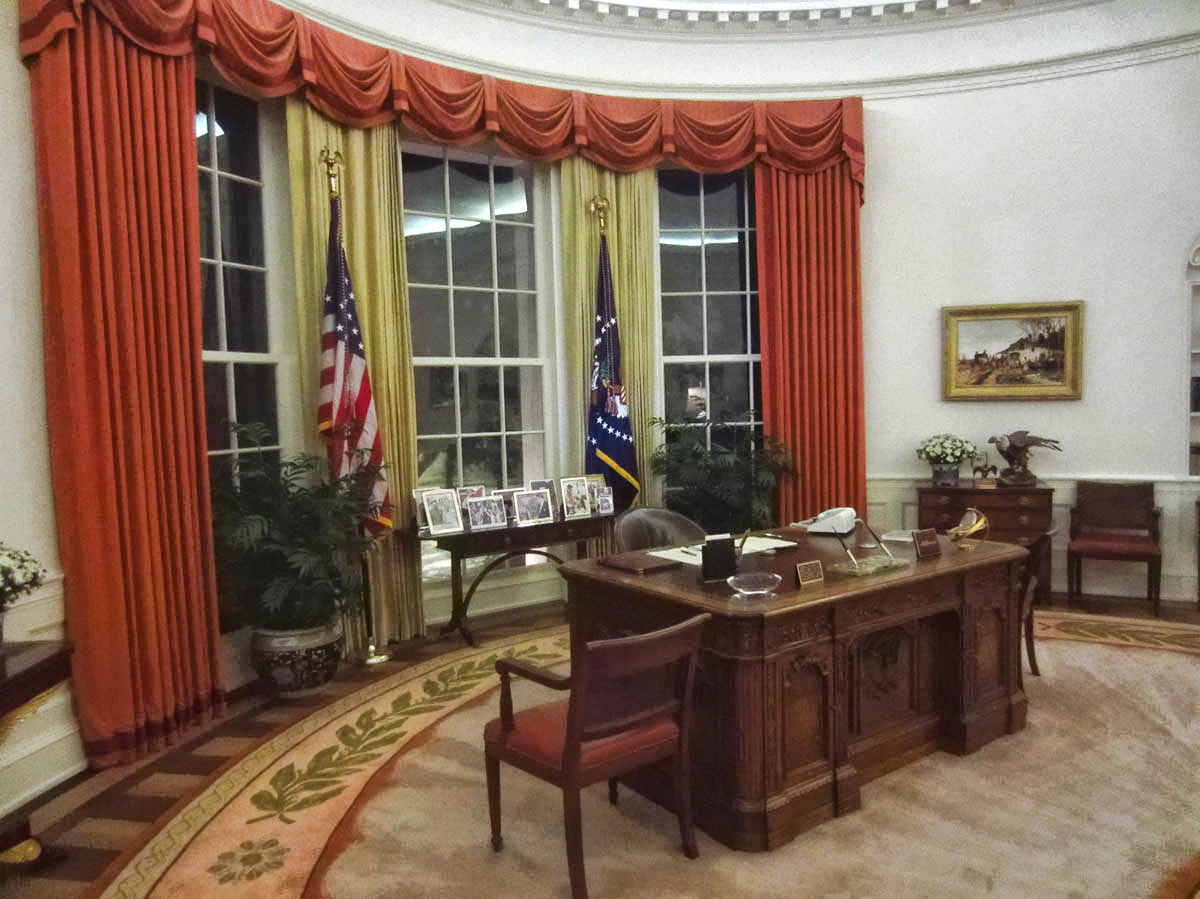 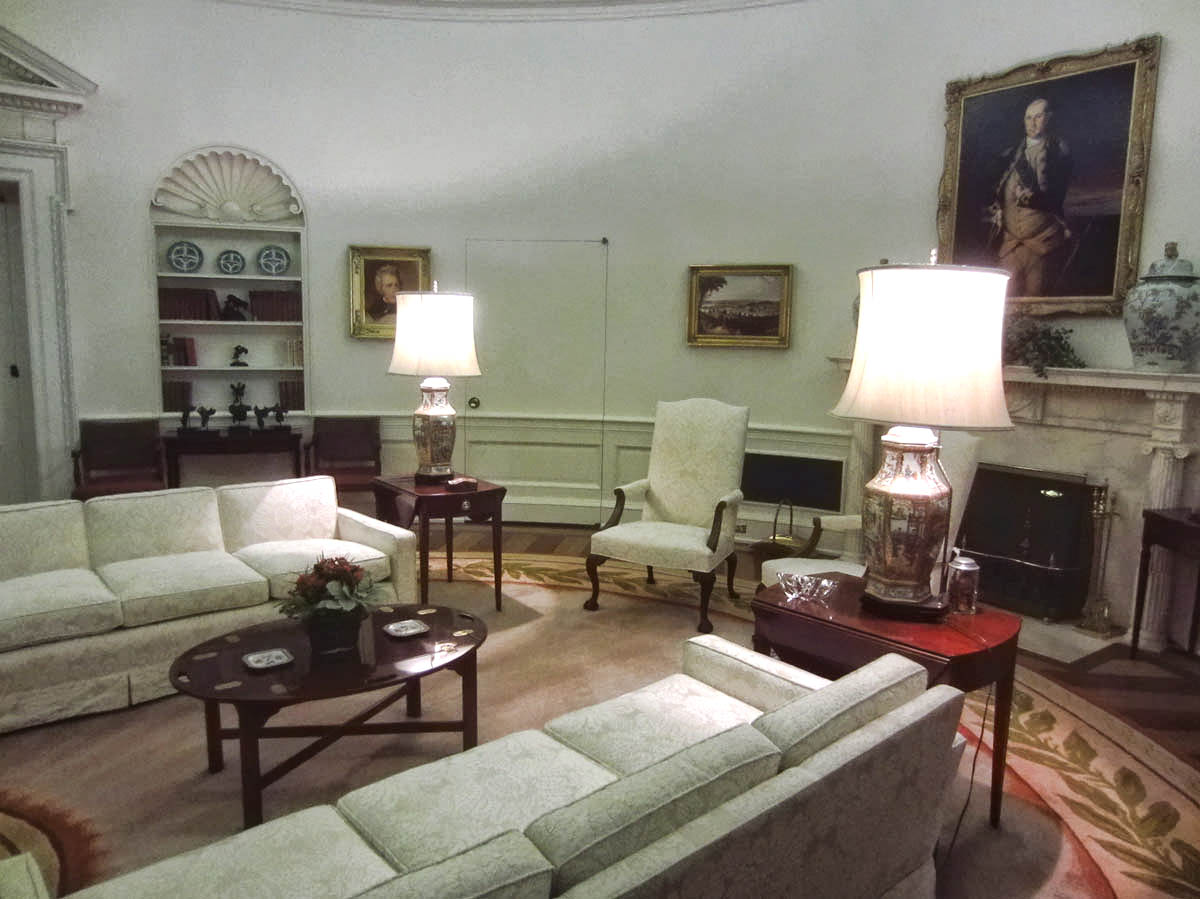 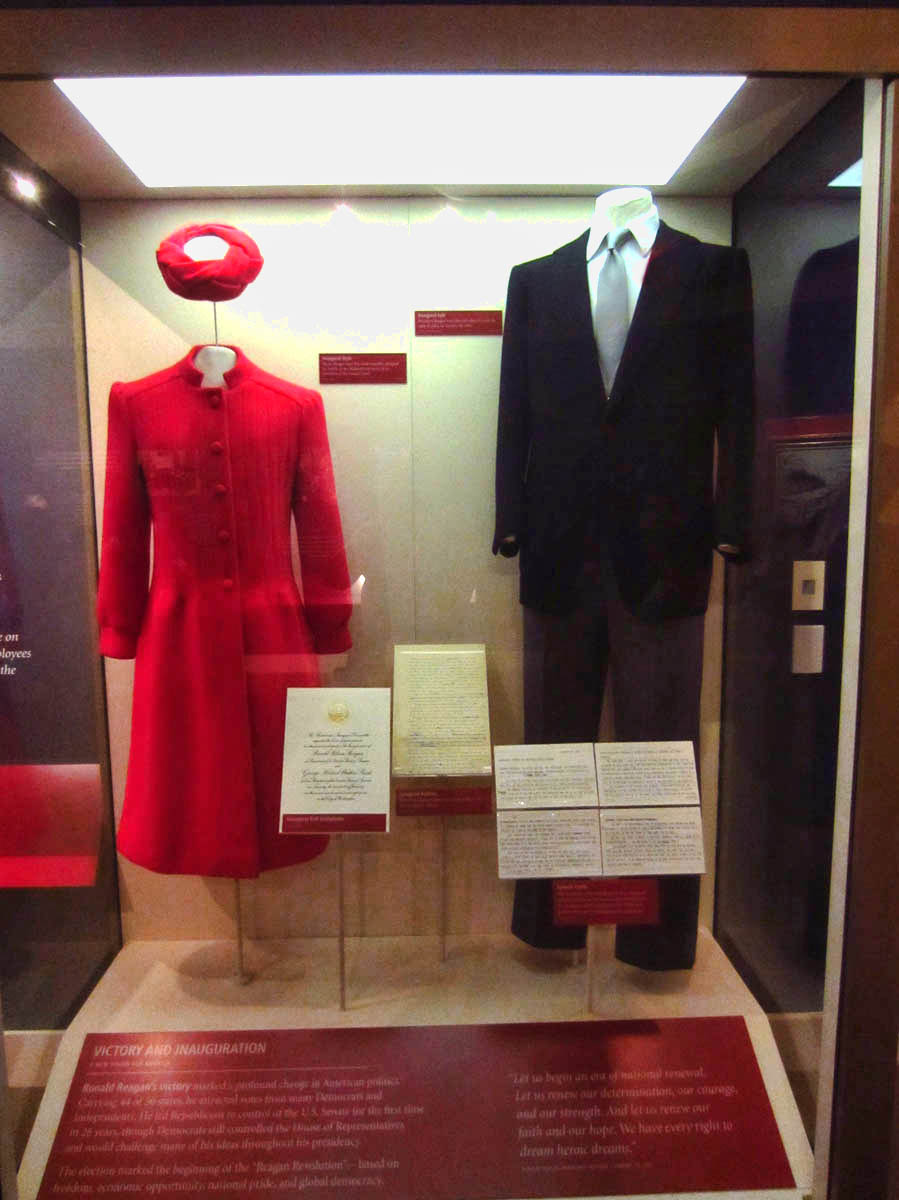 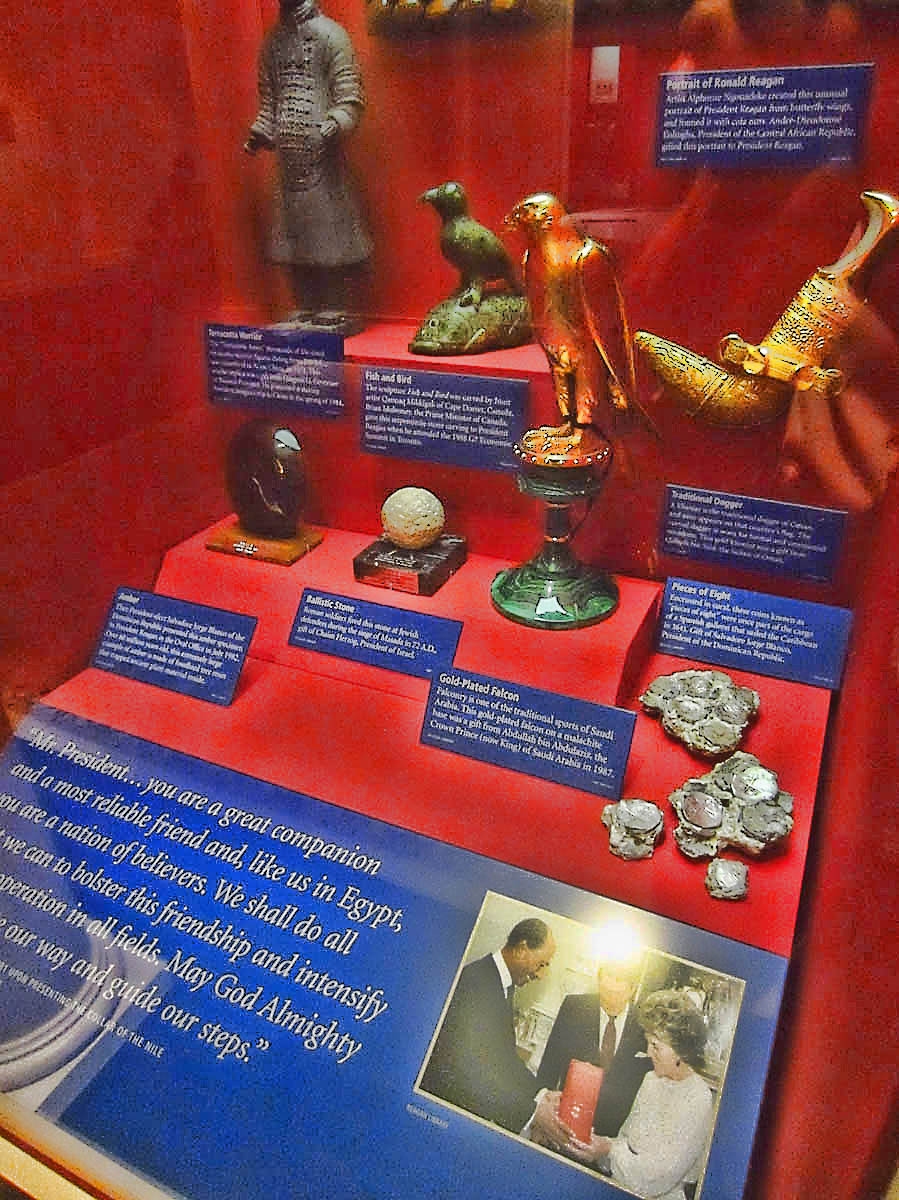 Cases of gifts from foreign dignitaries to include Spanish “pieces of eight.” 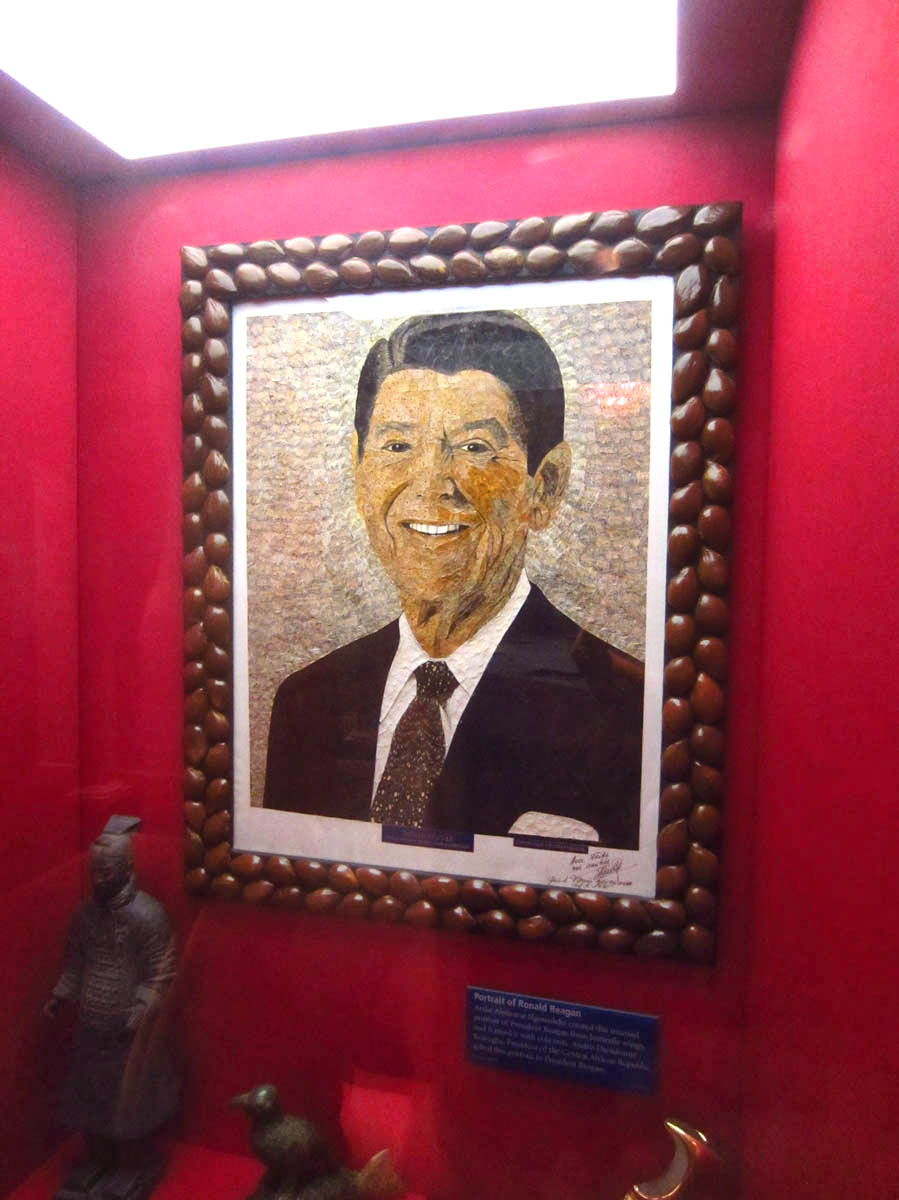 Sadly, this portrait, a gift from Central African Republic, was made out of butterfly wings. 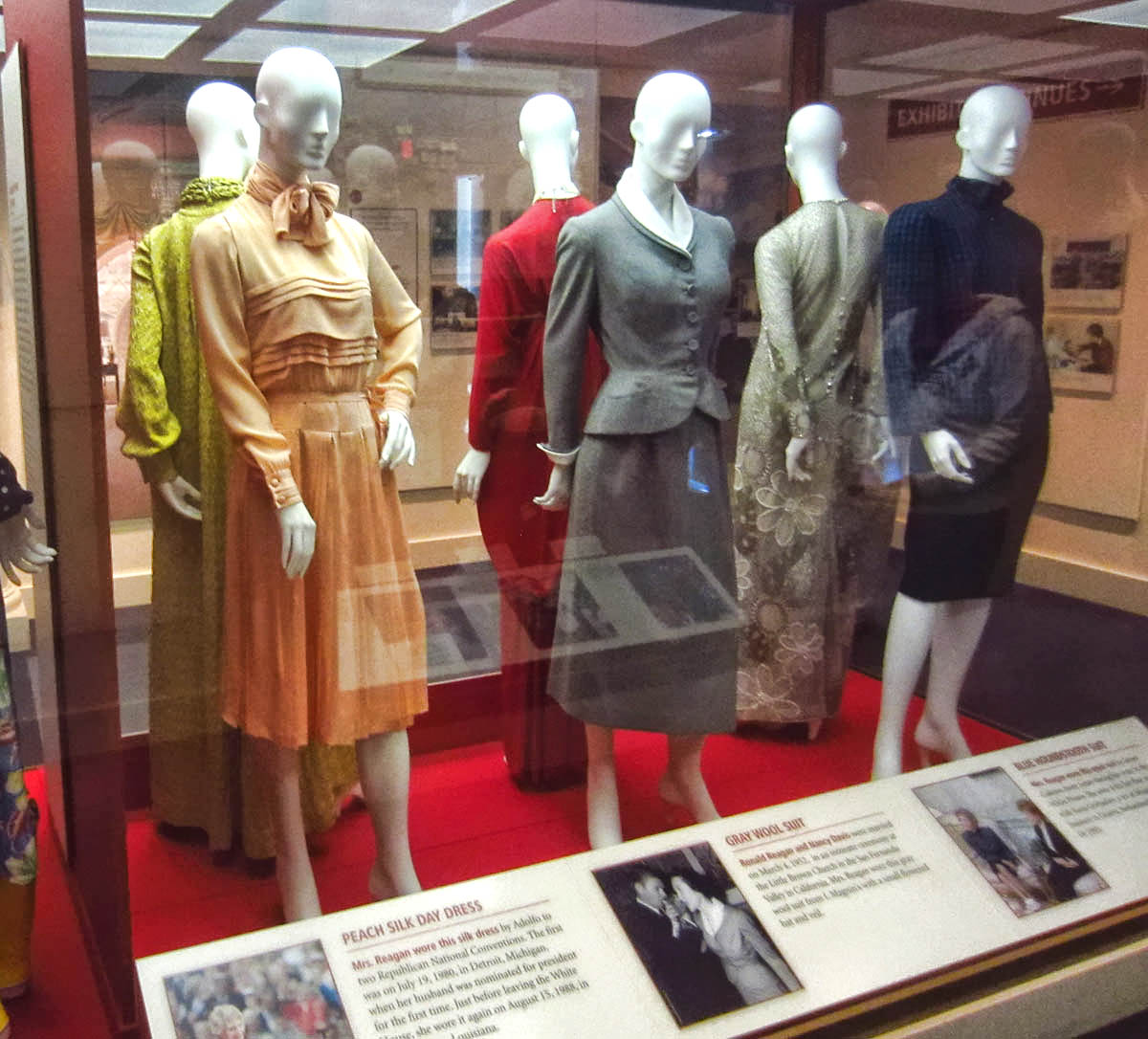 Nancy’s fashions. The gray suit in the middle was her wedding suit from 1954. Nancy was a Size 4 Petite. 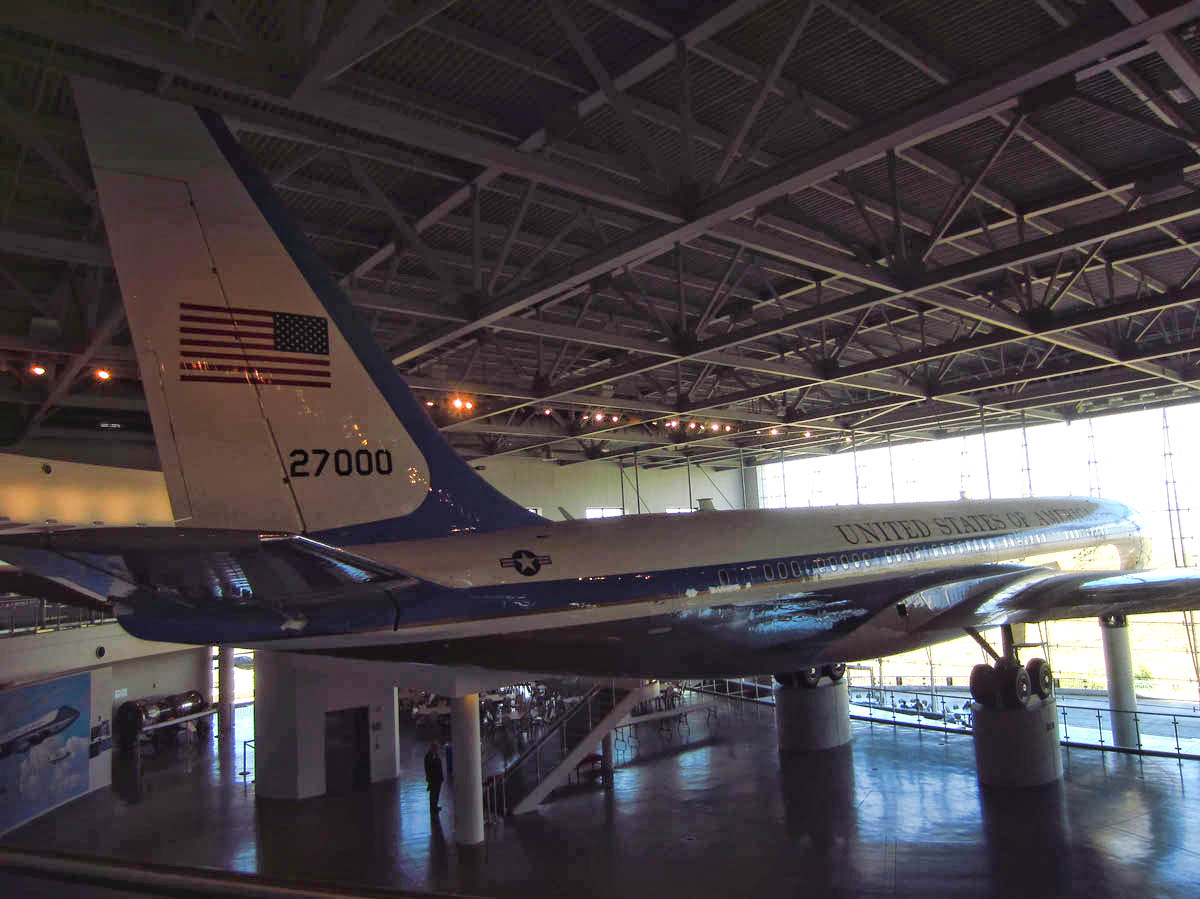 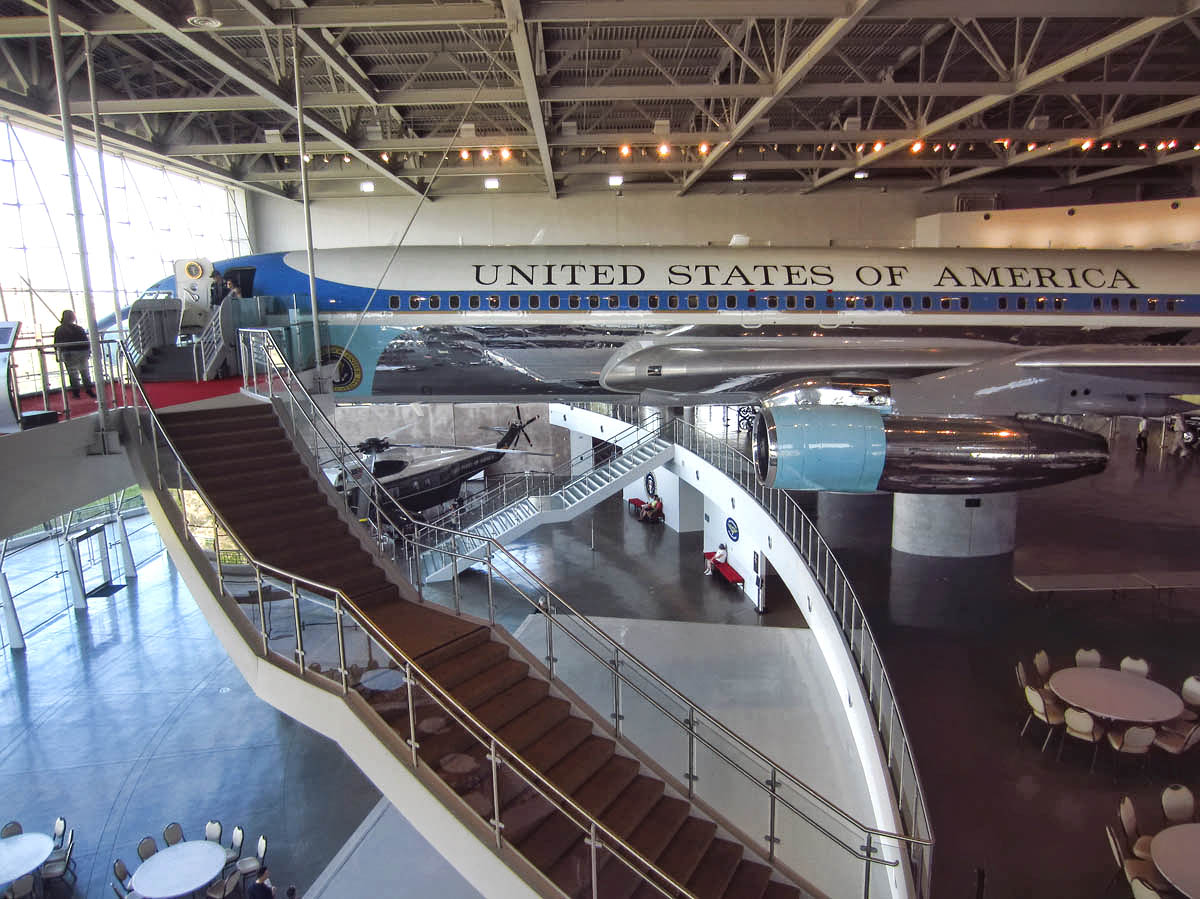 Visitors are handed a “boarding pass” for tours through the aircraft 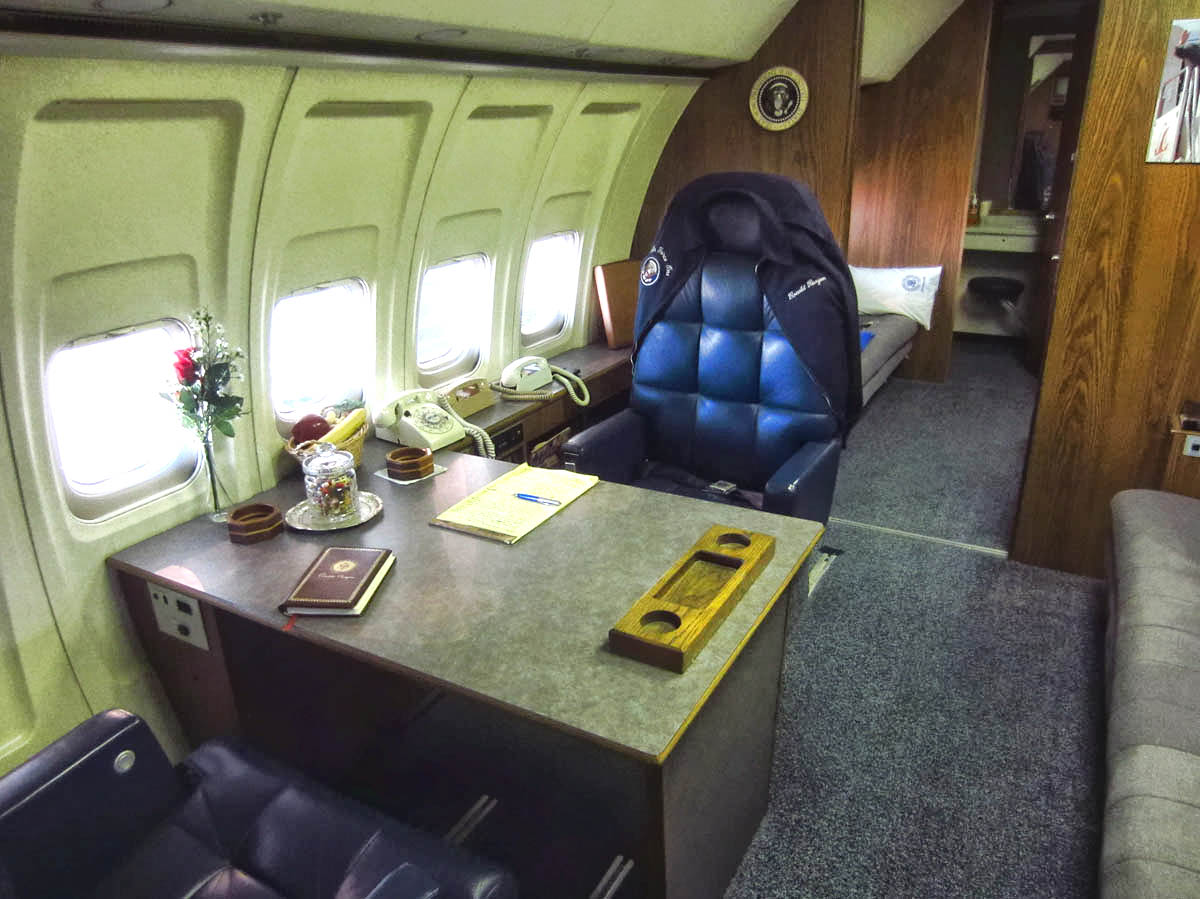 The President has his own private compartment on the plane. 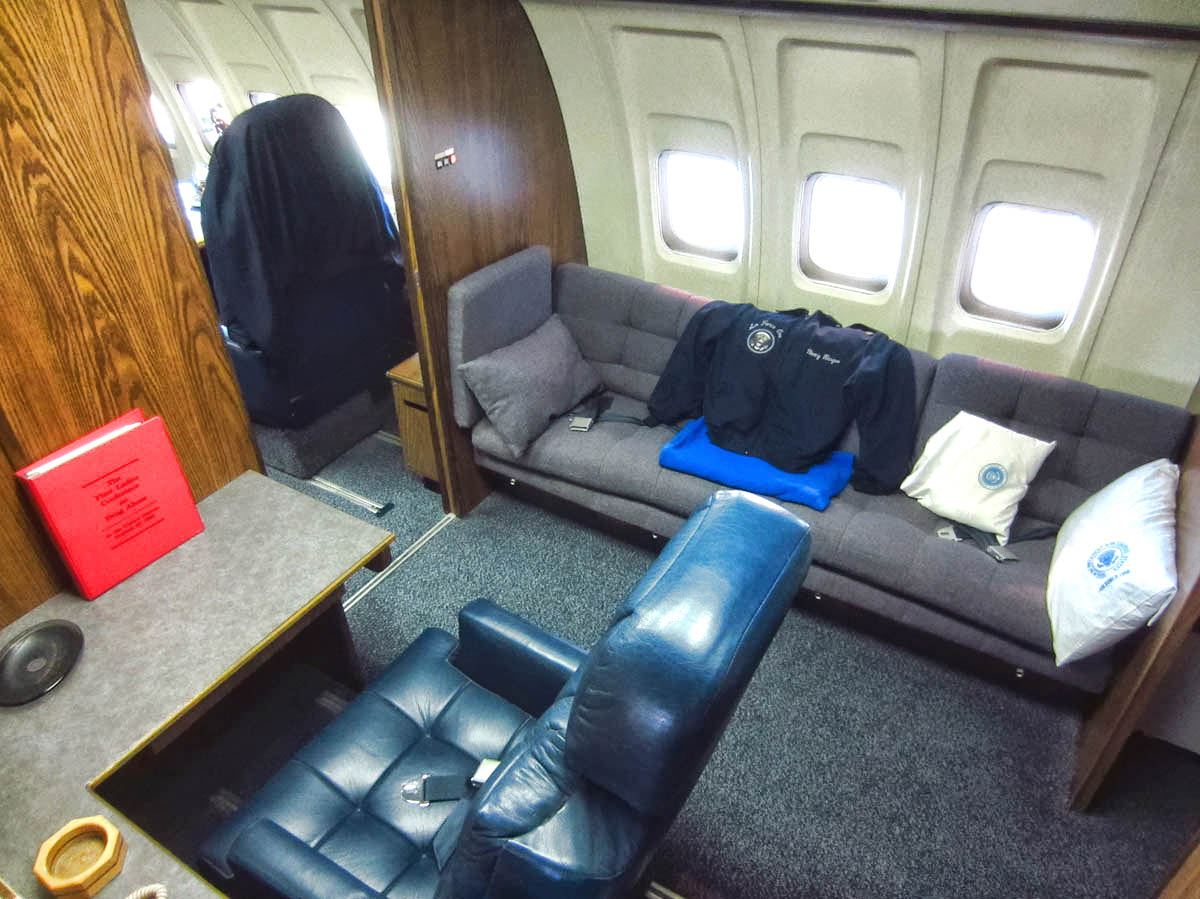 Behind the President’s cabin is a private cabin for the First Lady. I can’t help but snicker at the thought of Bill sitting in back should Hillary become POTUS. 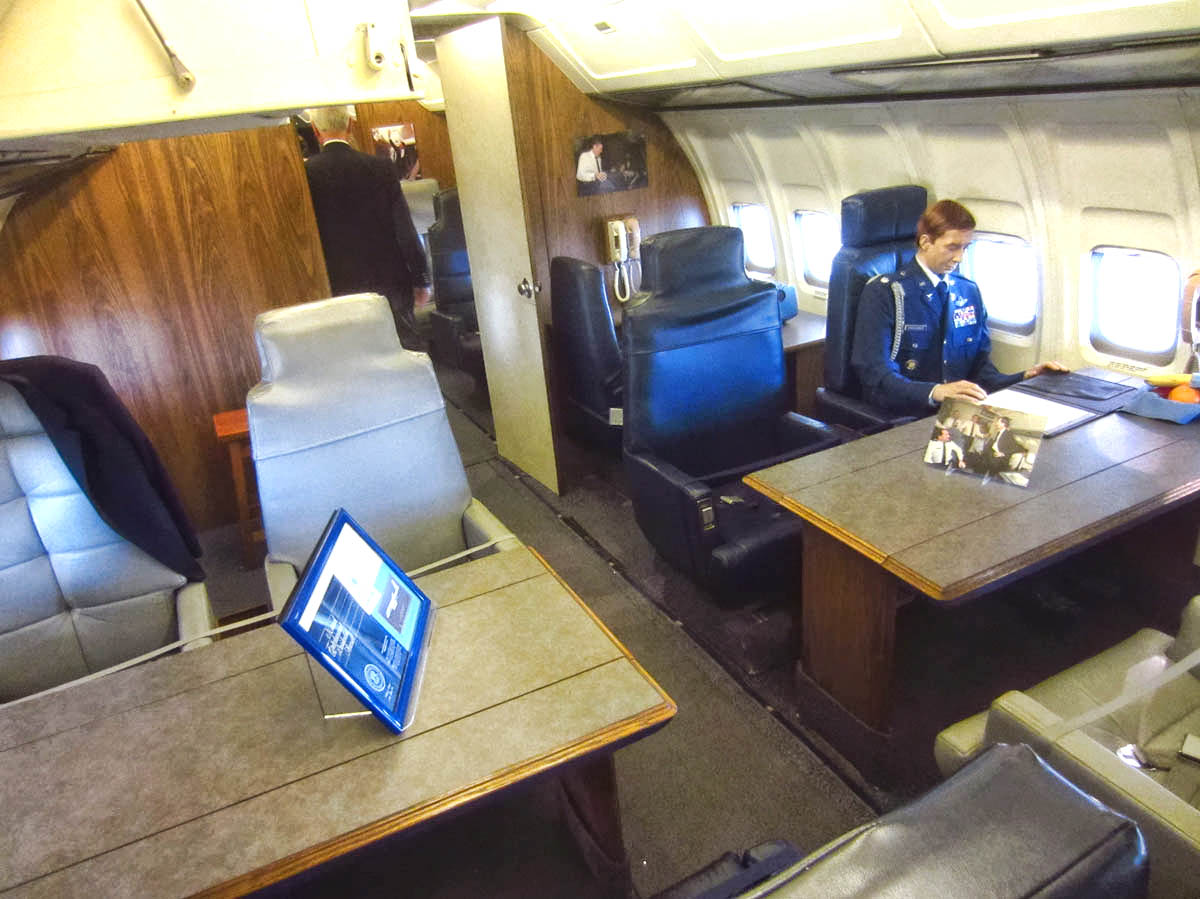 Staff quarters behind the First Lady. Behind them is a compartment for the Press. 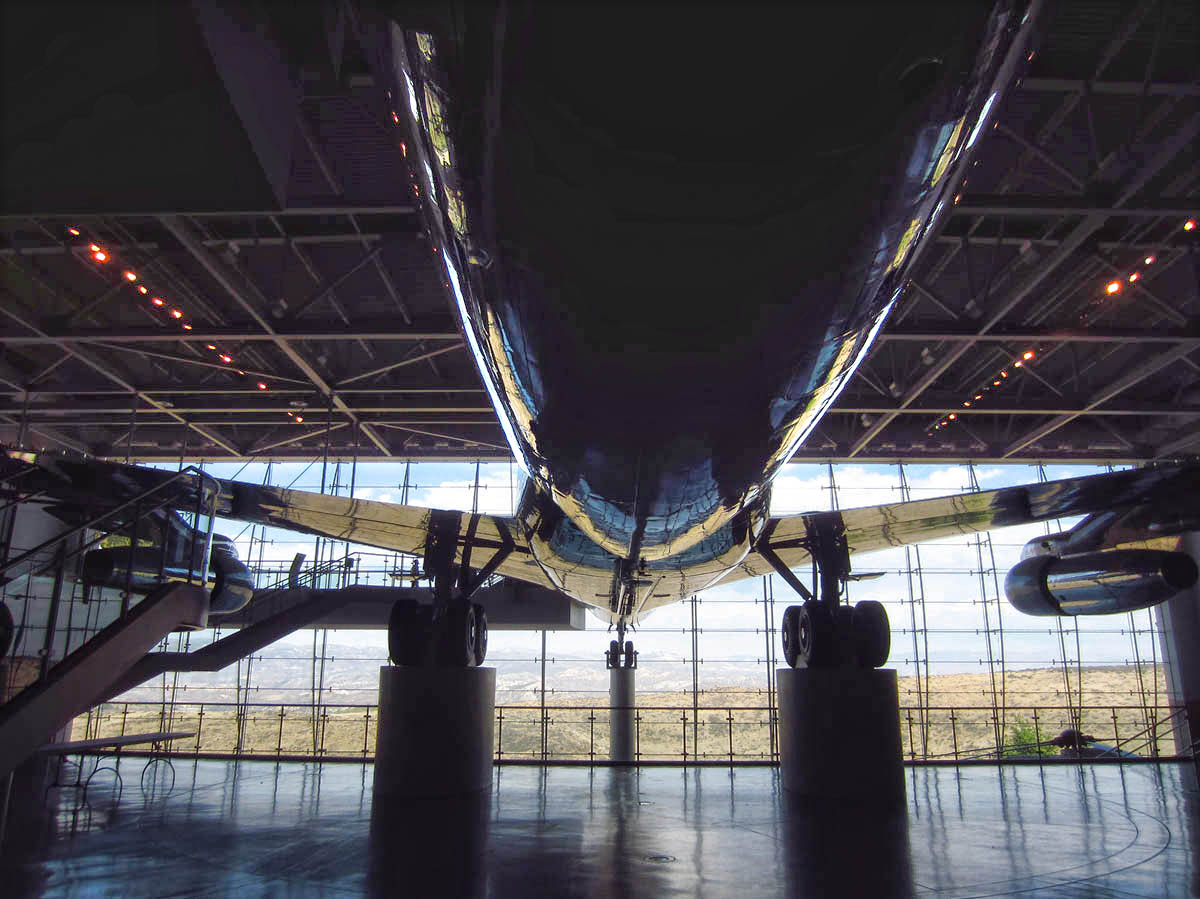 The belly of Air Force One. 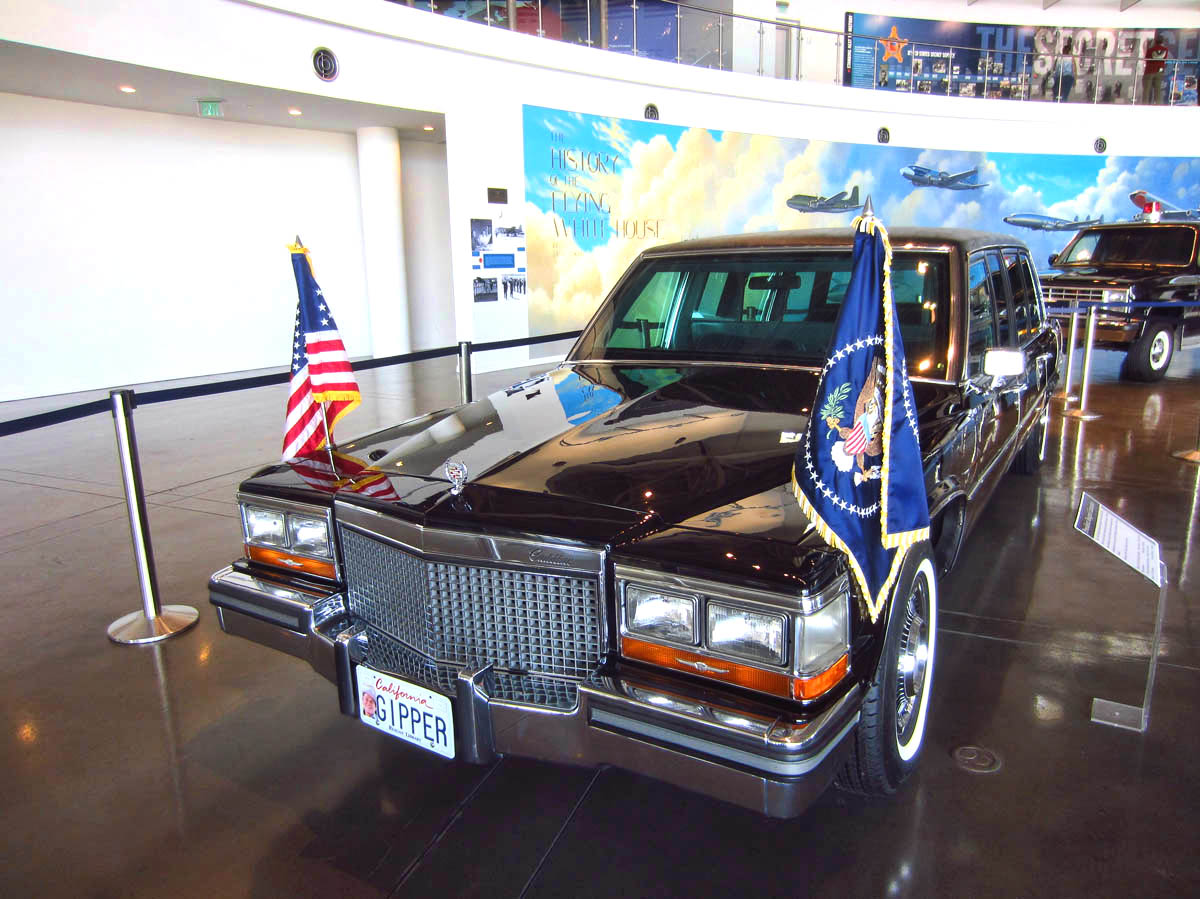 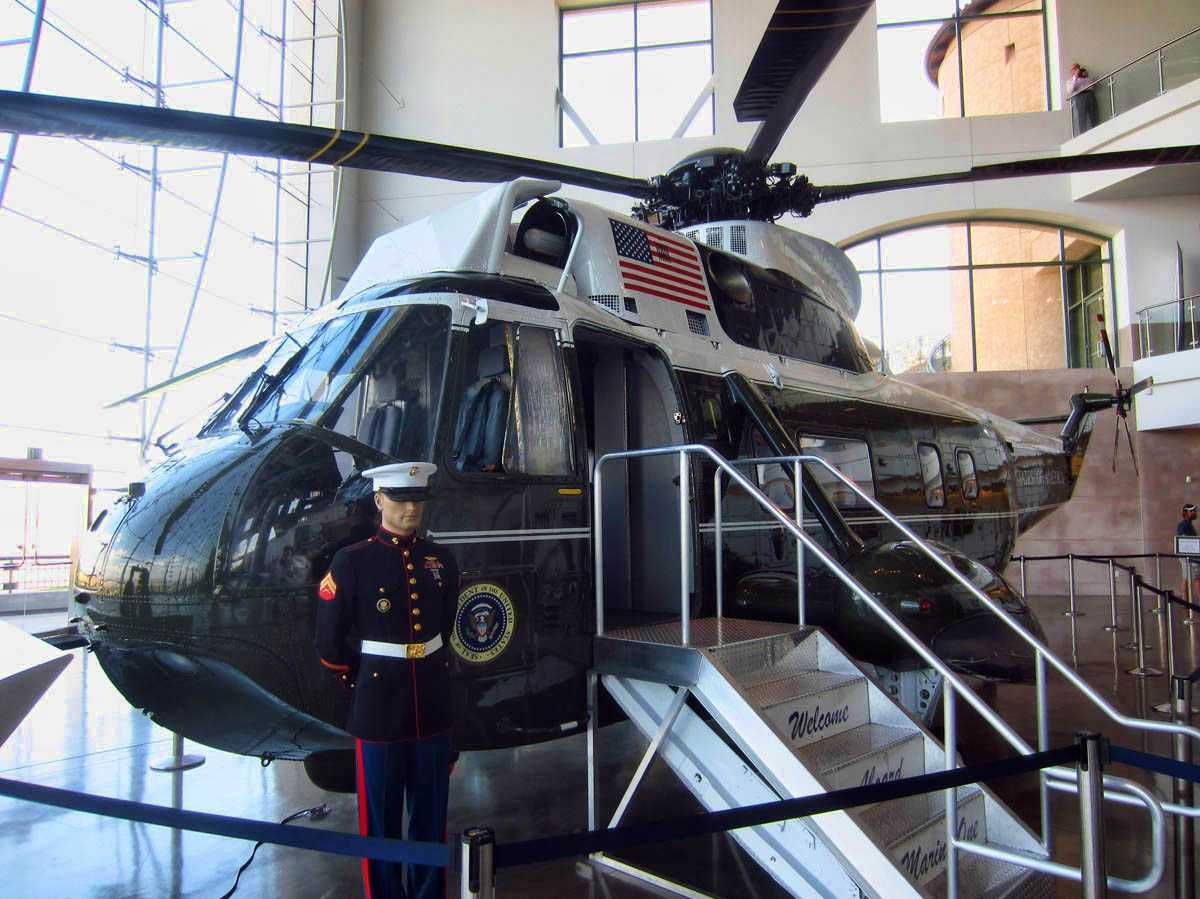 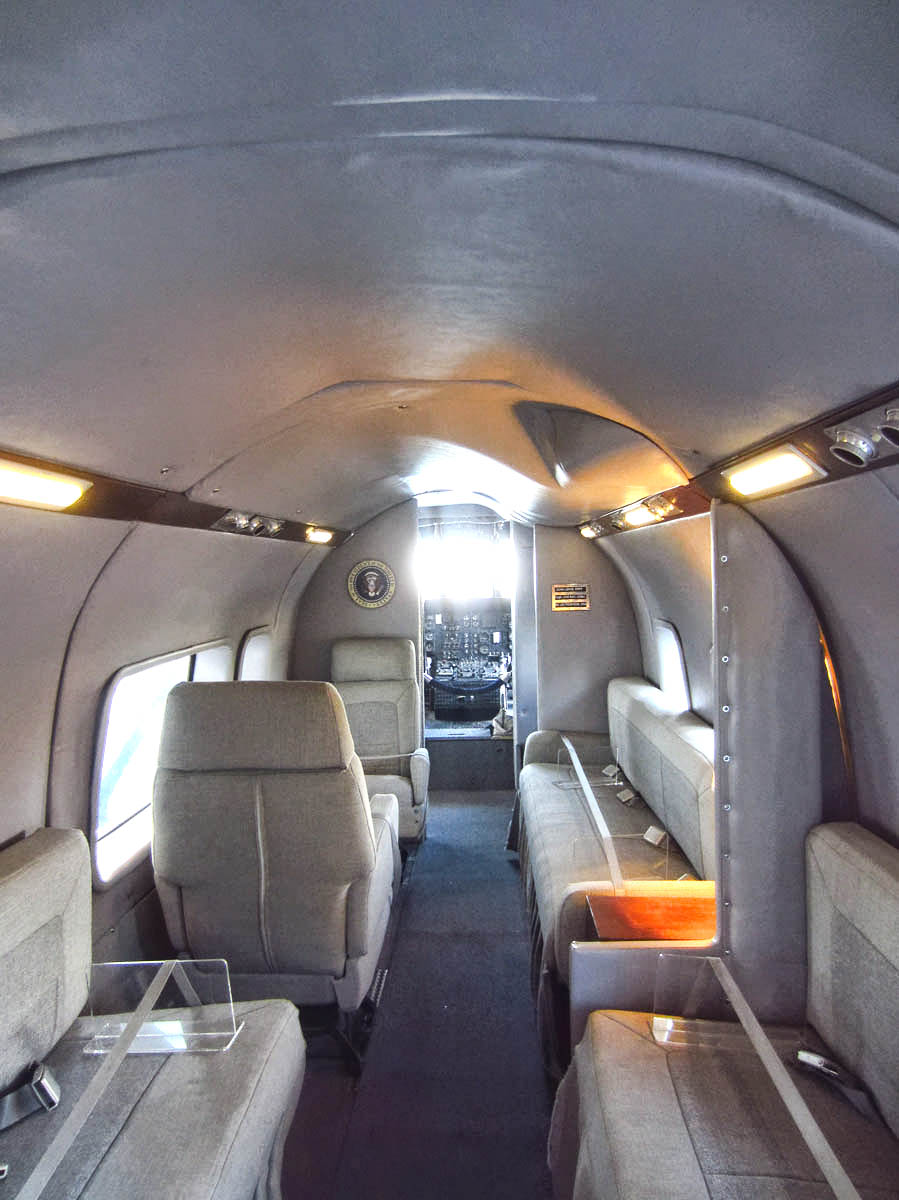 Unlike the Marine One in the Nixon Museum, photos are allowed inside the Reagan model. Helicopter can hold up to 15 passengers. 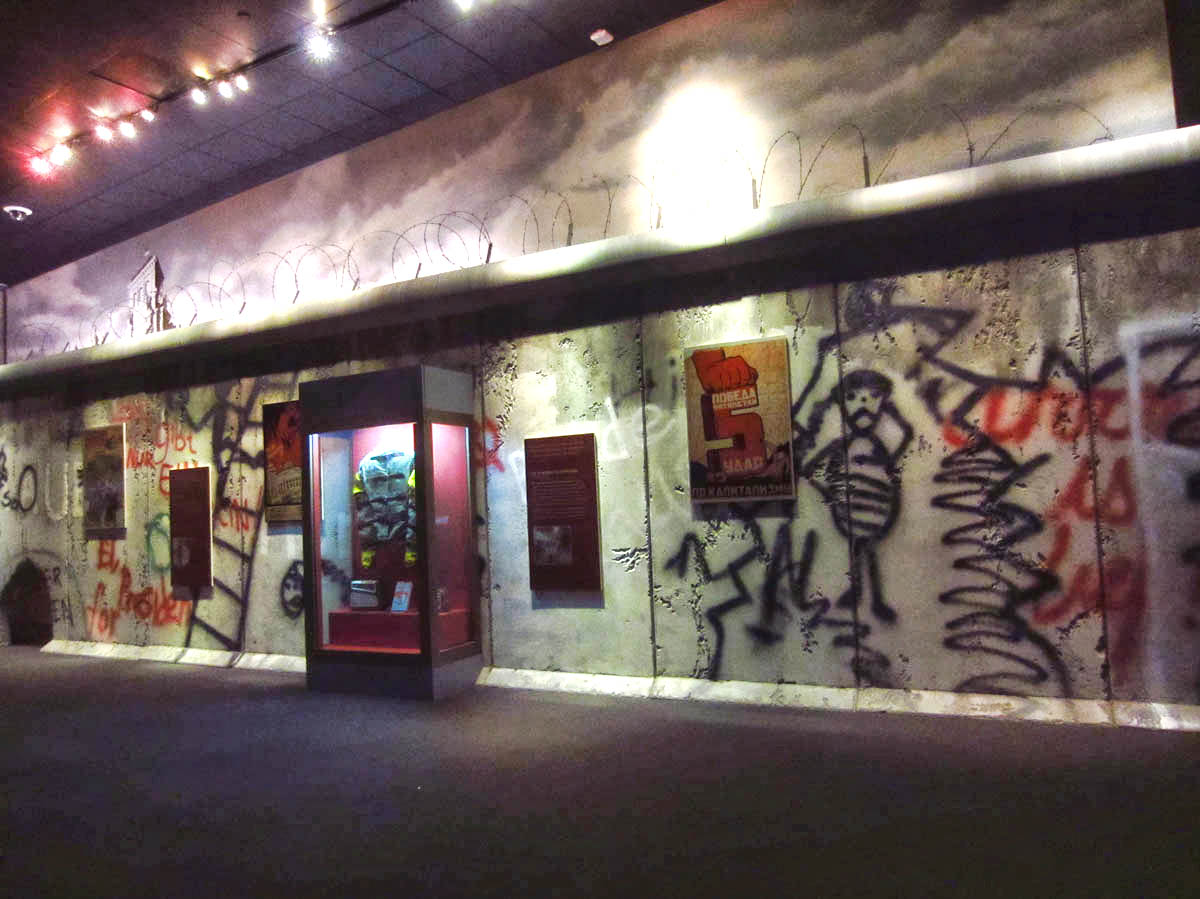 Replica of the Berlin Wall. Note hole in the wall on far left. If you stick your head through, a recording of ferocious dogs begin barking. 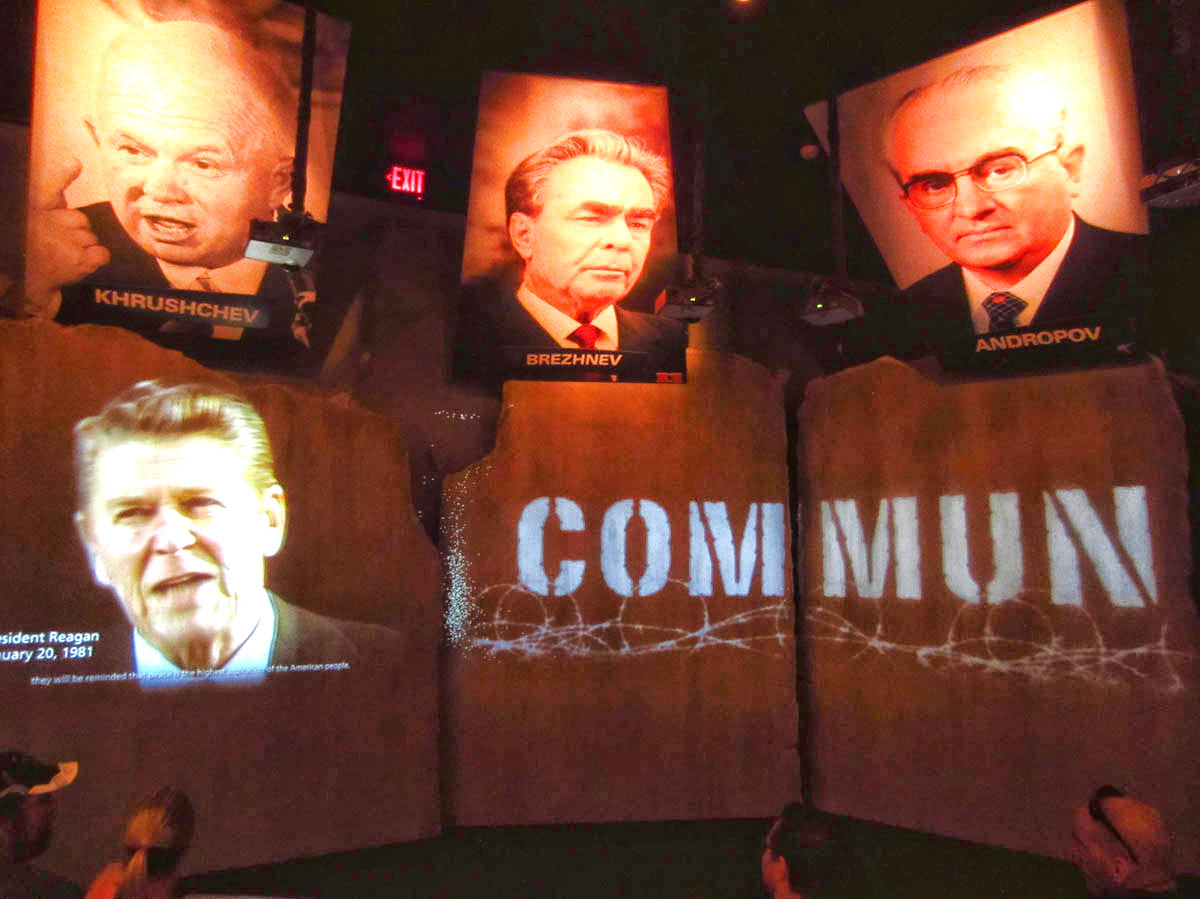 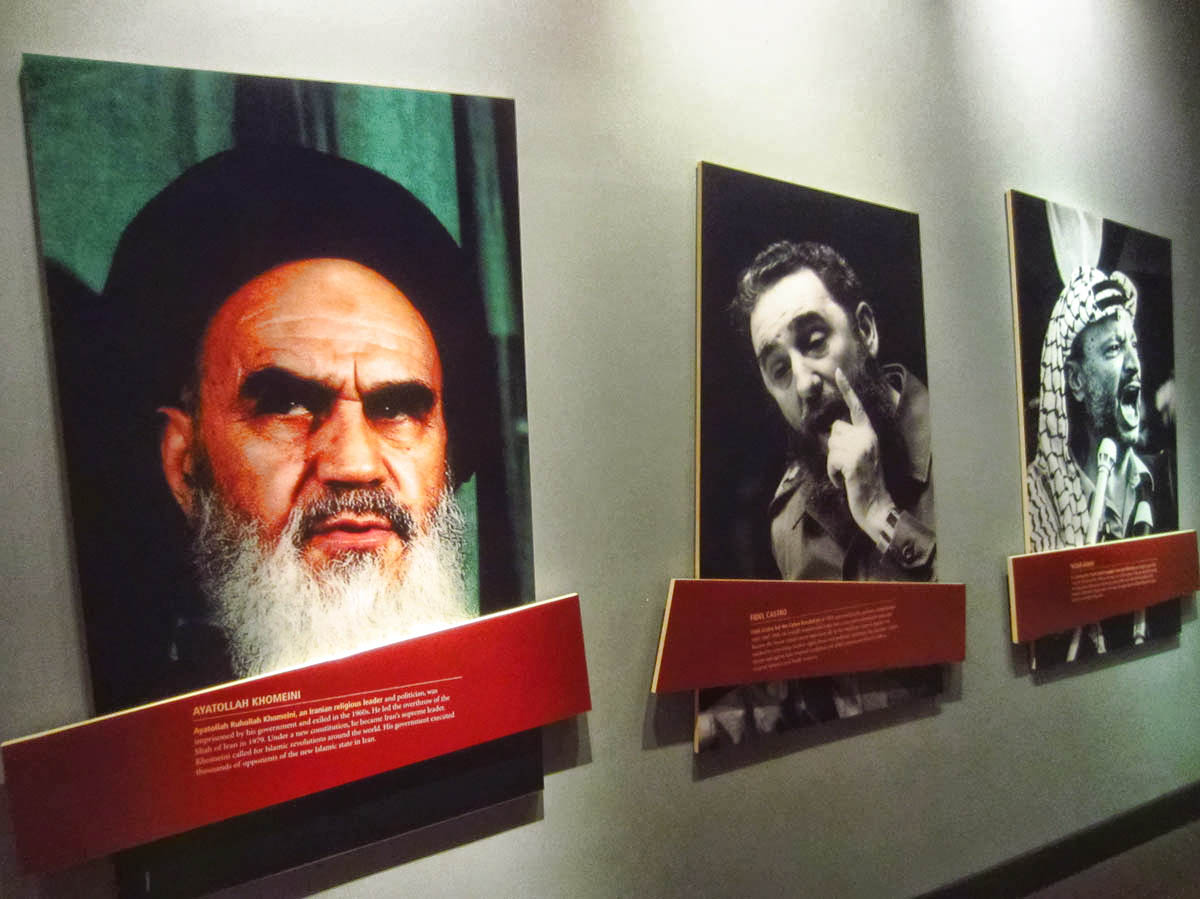 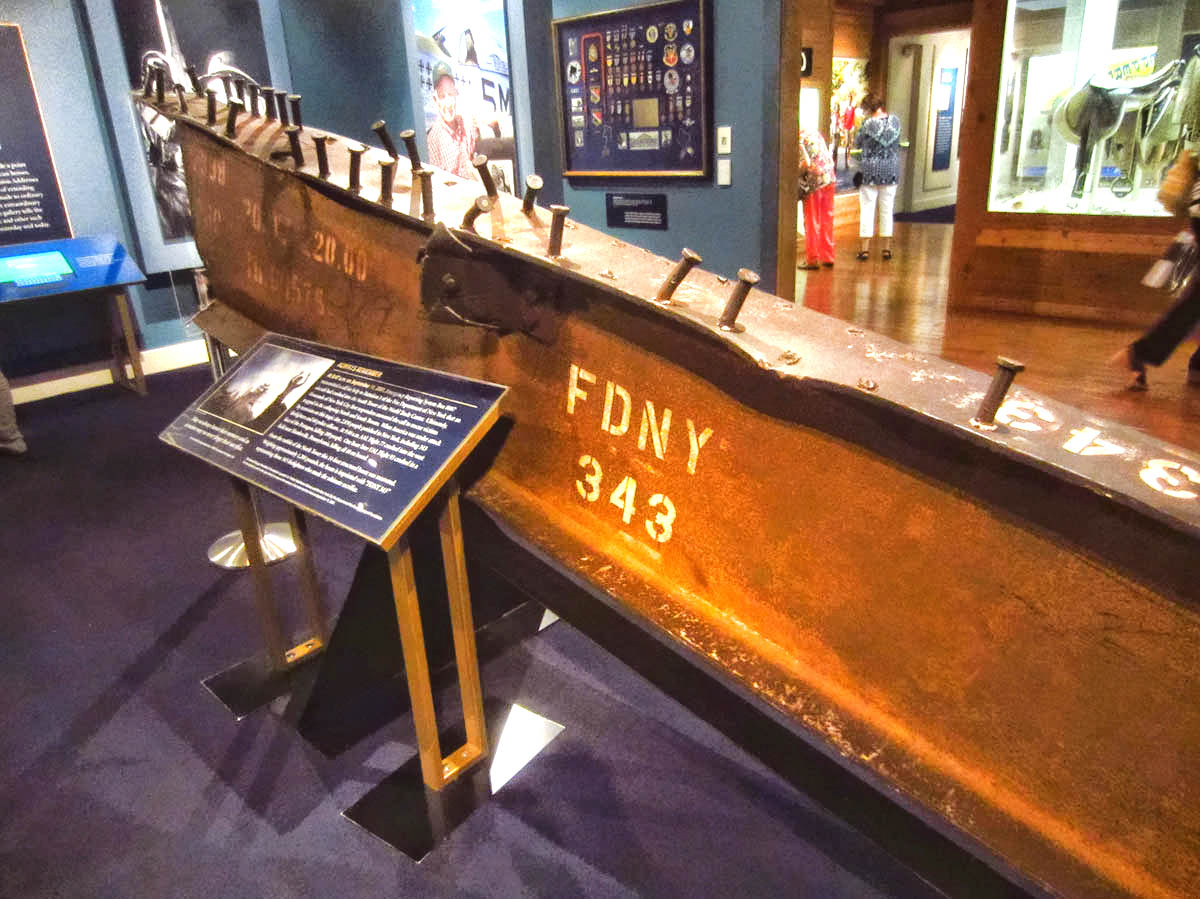 Steel beam from 9/11. I am not sure how this fits into the Reagan theme. Seems like everyone wants a piece of the FDNY heroism. 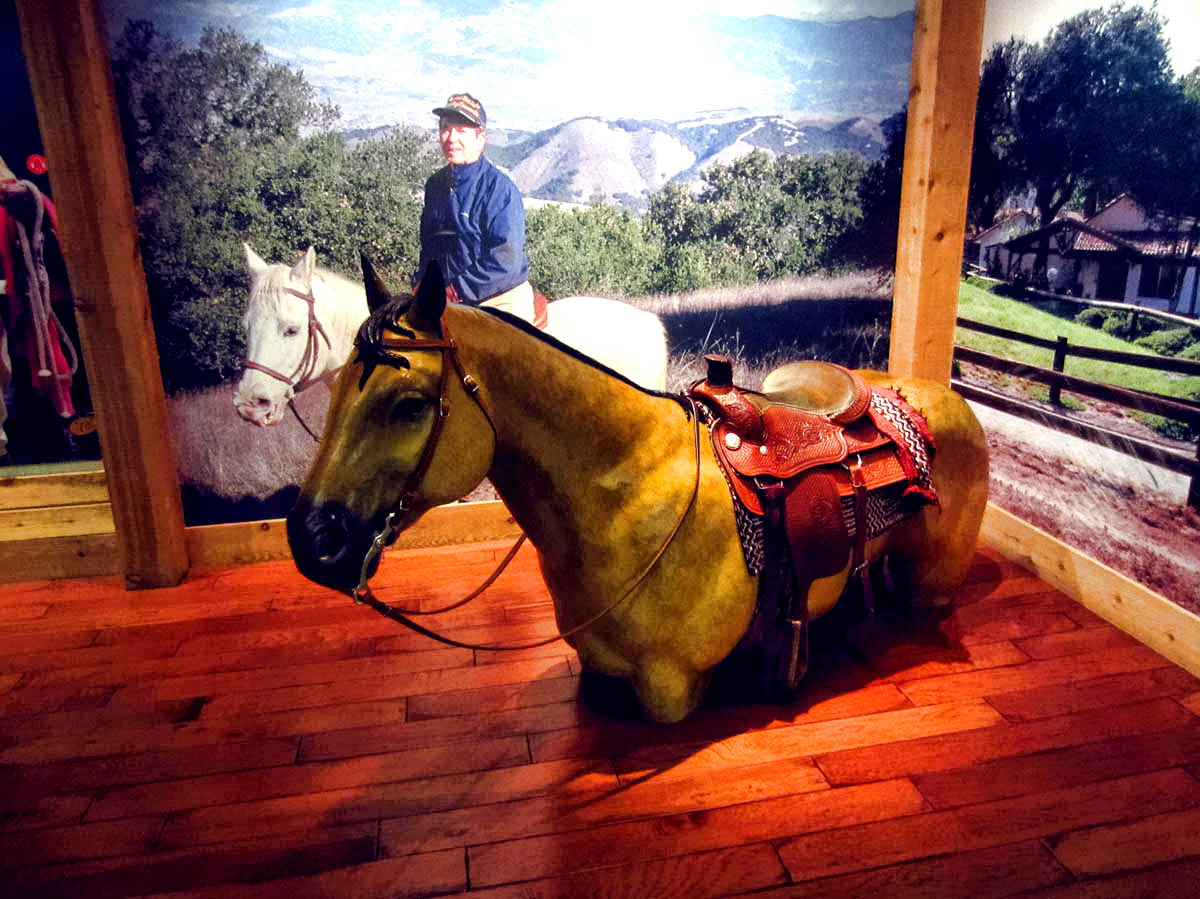 Saddle up and have your photo taken while riding with Reagan. 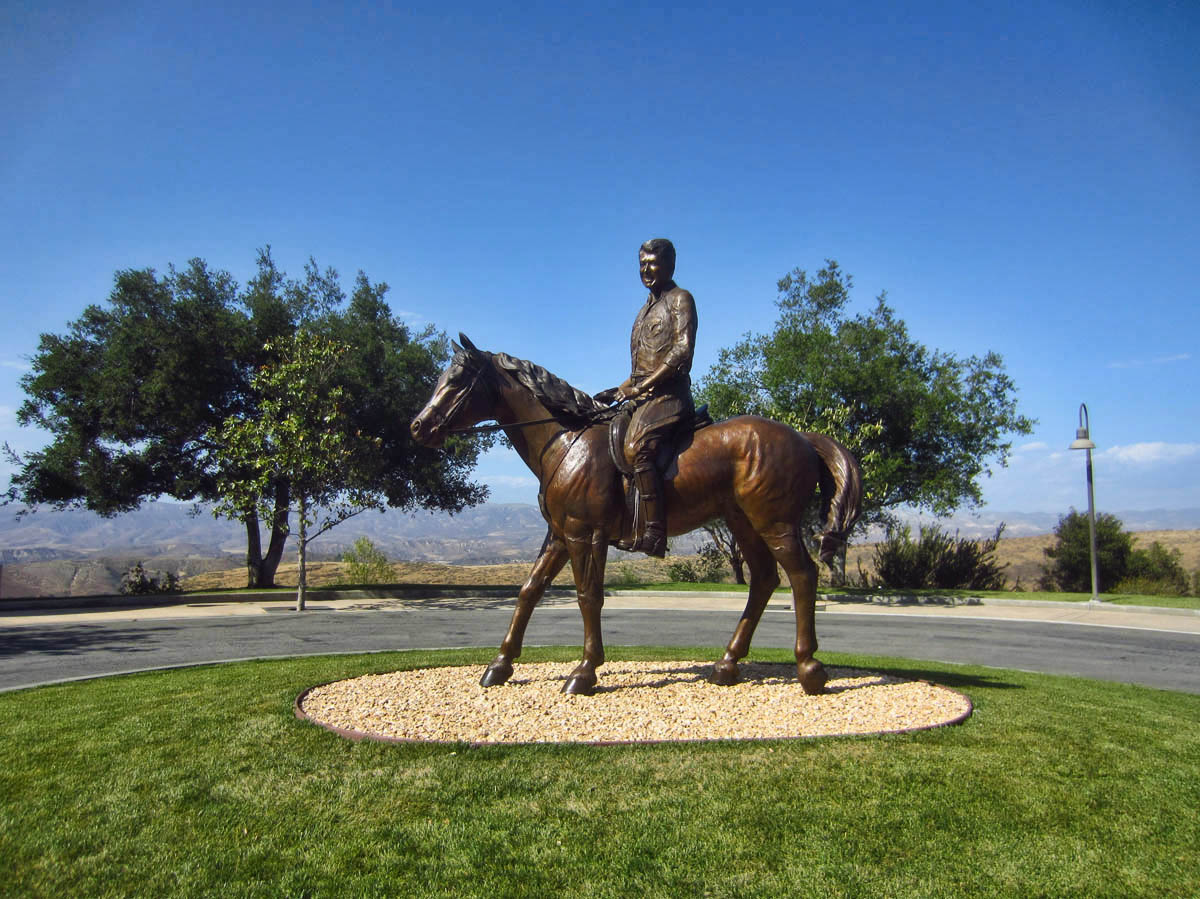 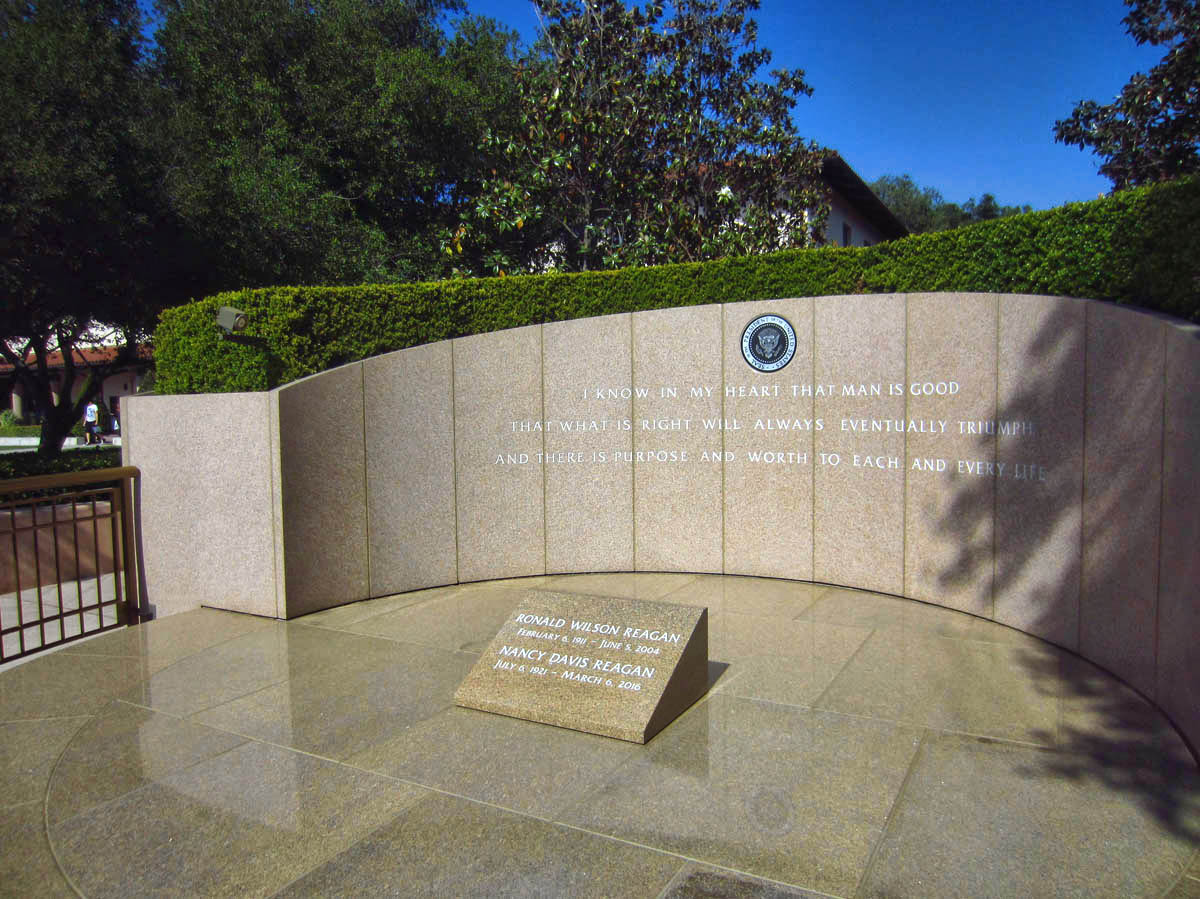