It’s not possible to move between the Channel Islands by way of commercial transportation.  Only by private boat can one visit multiple islands in one boat trip.  Otherwise, one must go back to the mainland and book another excursion with Island Packers.  Which is precisely what I did.

So why would I do this after having spent three delightful, fulfilling days hiking, kayaking, and exploring Santa Cruz…really, all the best that the Channel Islands has to offer?   What has Anacapa Island got that Santa Cruz hasn’t got?? 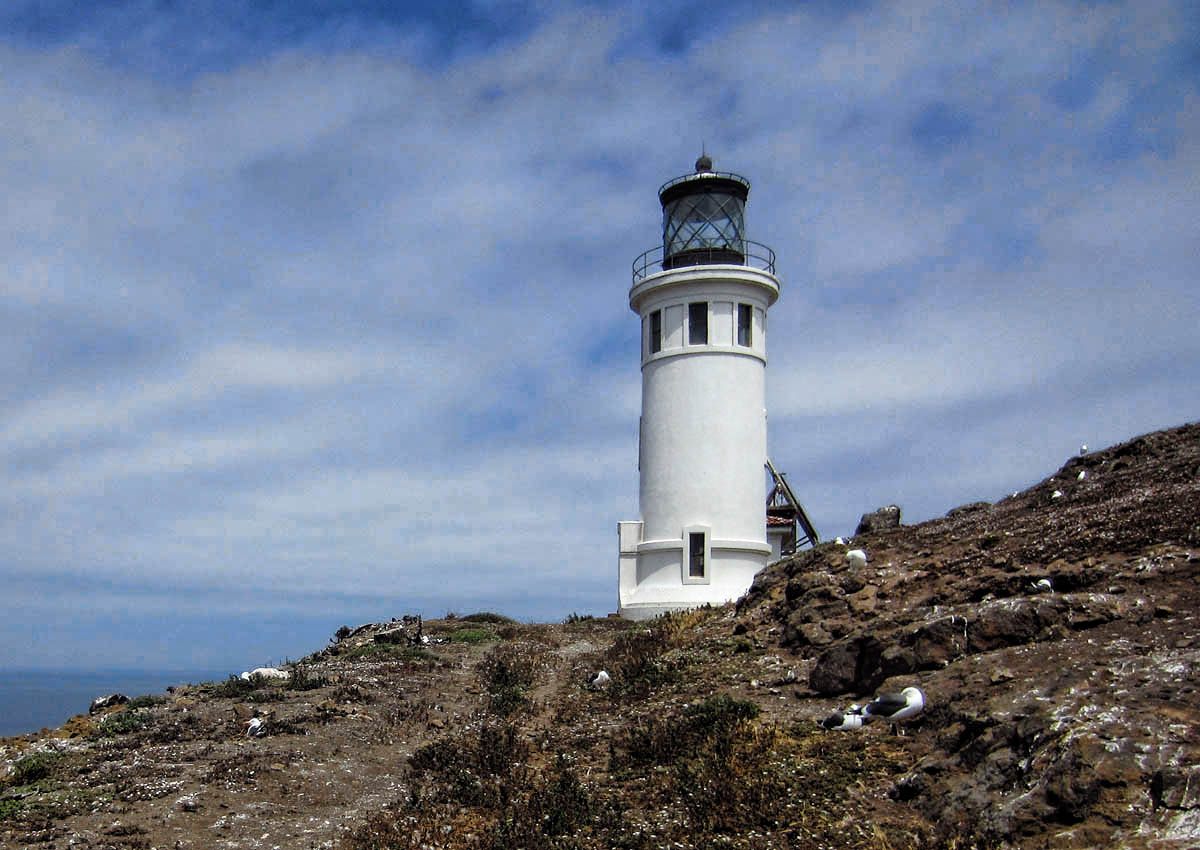 Yes, it’s that time again.  Back on the coast, and I can’t resist the lure of a beautiful lighthouse.  Especially one that stands all alone on an island!   Anacapa Island Light, constructed in 1932, was the last permanent lighthouse to be built along the western coast, allowing mariners to navigate the narrow, 1,000 ft deep channel between the islands and the mainland. 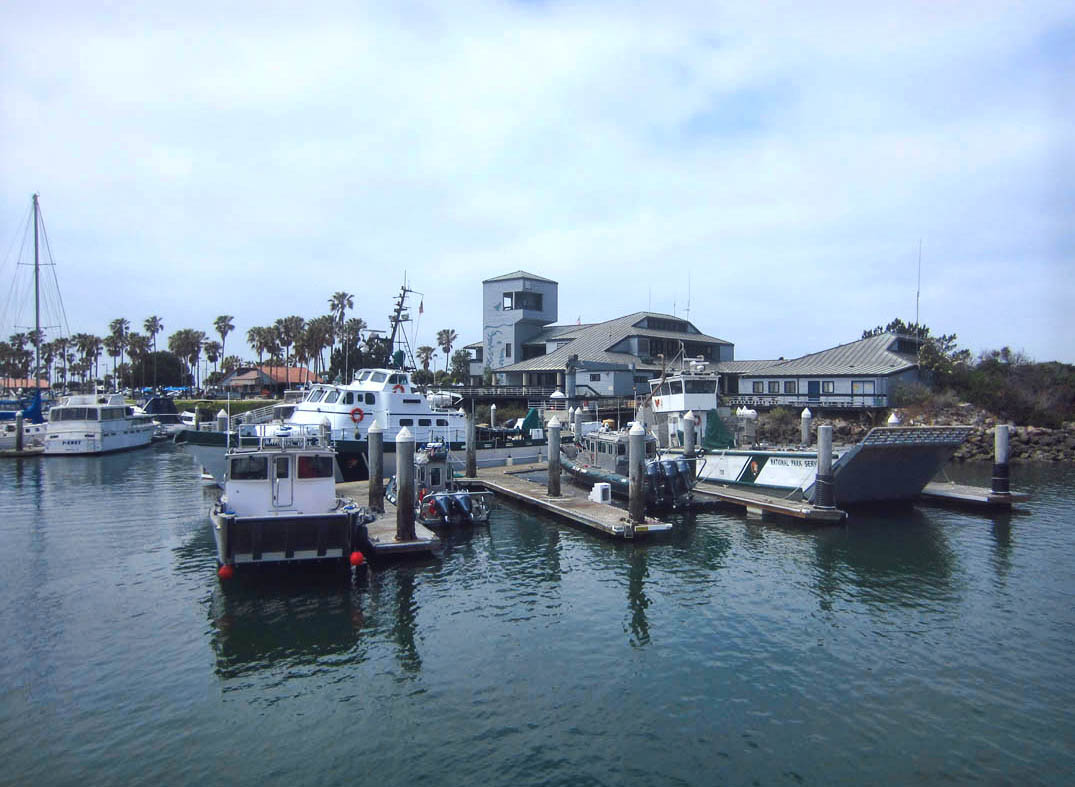 The tower and gray building are the Robert J. Lagomarsino Visitor Center in Ventura Harbor on the mainland.

Anacapa Island, closest to the mainland, is actually three small islets, East, Middle, and West, attached beneath the surface by reef.   They are named for their Chumash Native American Indian name which means “mirage.”   The only island with a commercial launch is the East Island, about one mile long by a quarter mile wide.   The east island is the only one of the three inhabited in modern times, as East Anacapa is also the location of the lighthouse.

It’s another crazy boat ride across the marine-rich channel as we pass sea lions doing the backstroke, three gray whales migrating close to shore, and then the Captain spots a dolphin riding our bow wake.  First there is one….then two….then three….then… 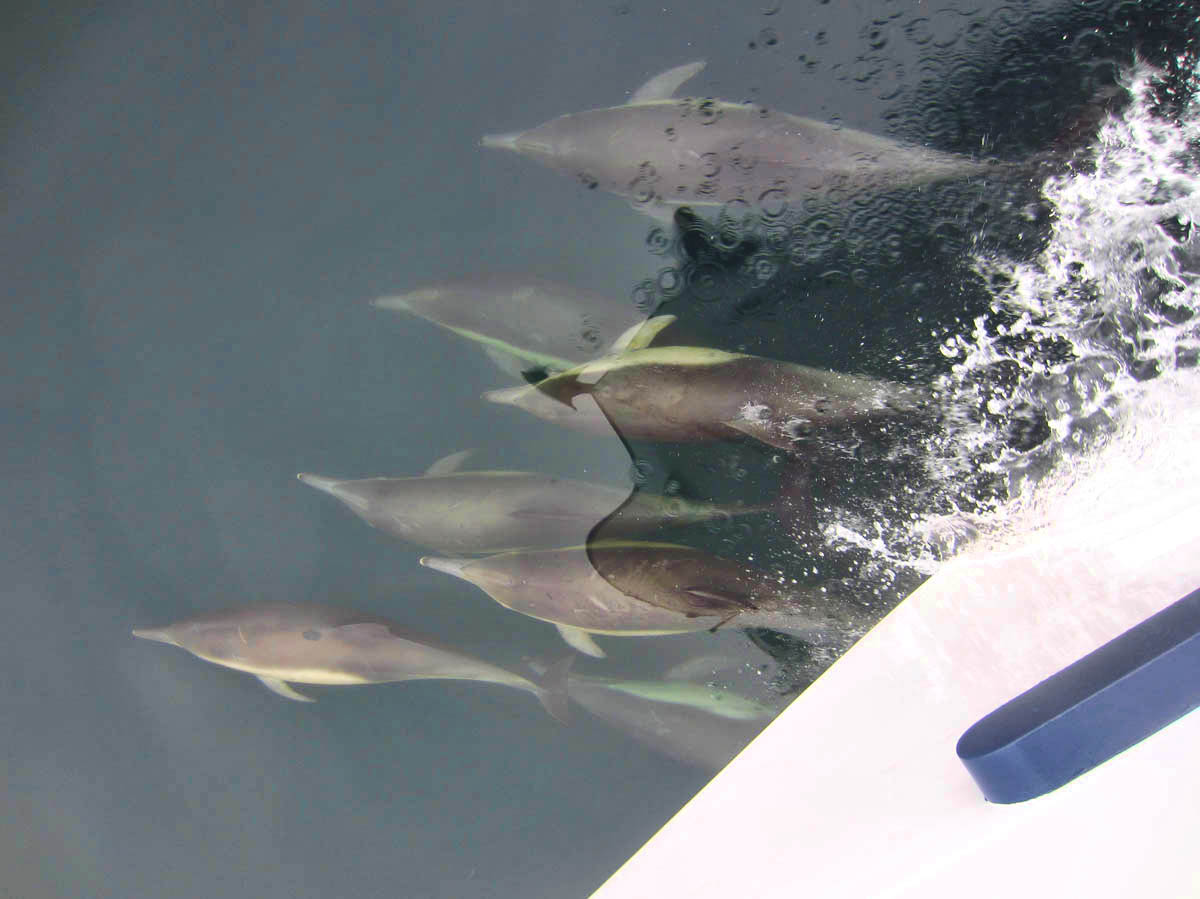 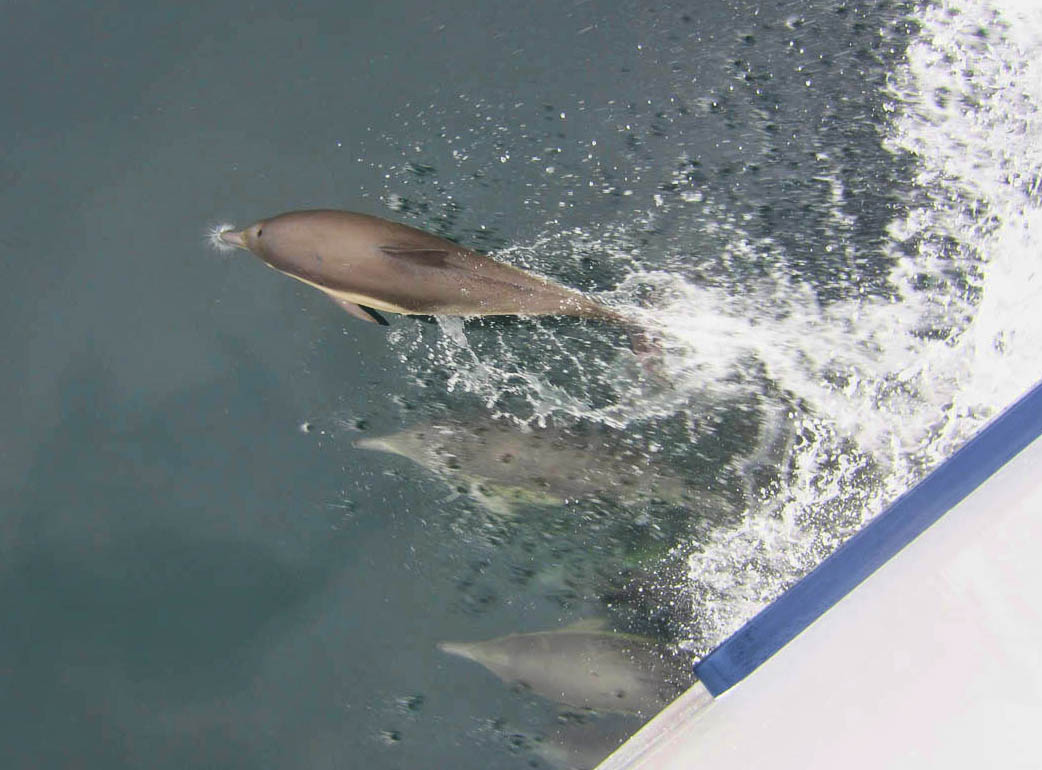 It takes quite a few attempts, but I finally capture a photo of one breaking above the surface! 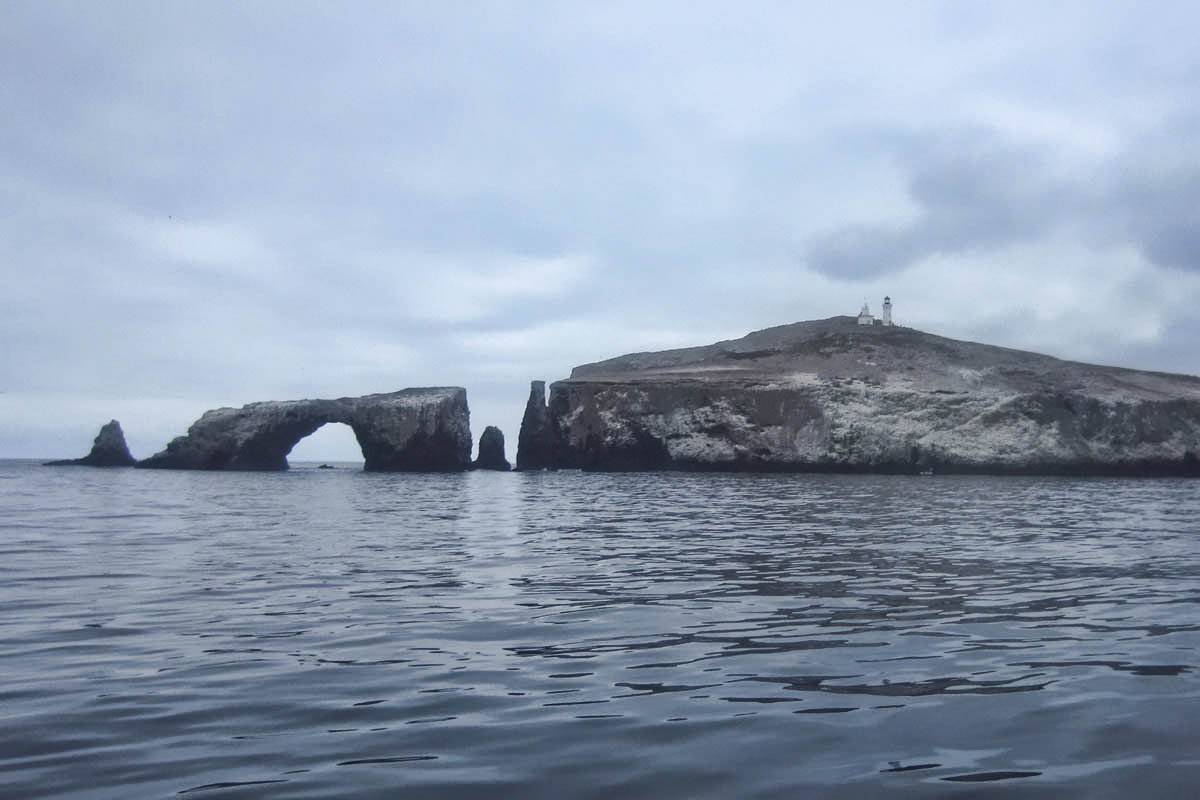 The iconic Channel Islands Arch comes into view as we approach the harbor.

We will be docking alongside a huge platform where we must climb 157 steps to the top.  There is lots of talk of safety instructions on arrival, including how to climb a ladder.  😉 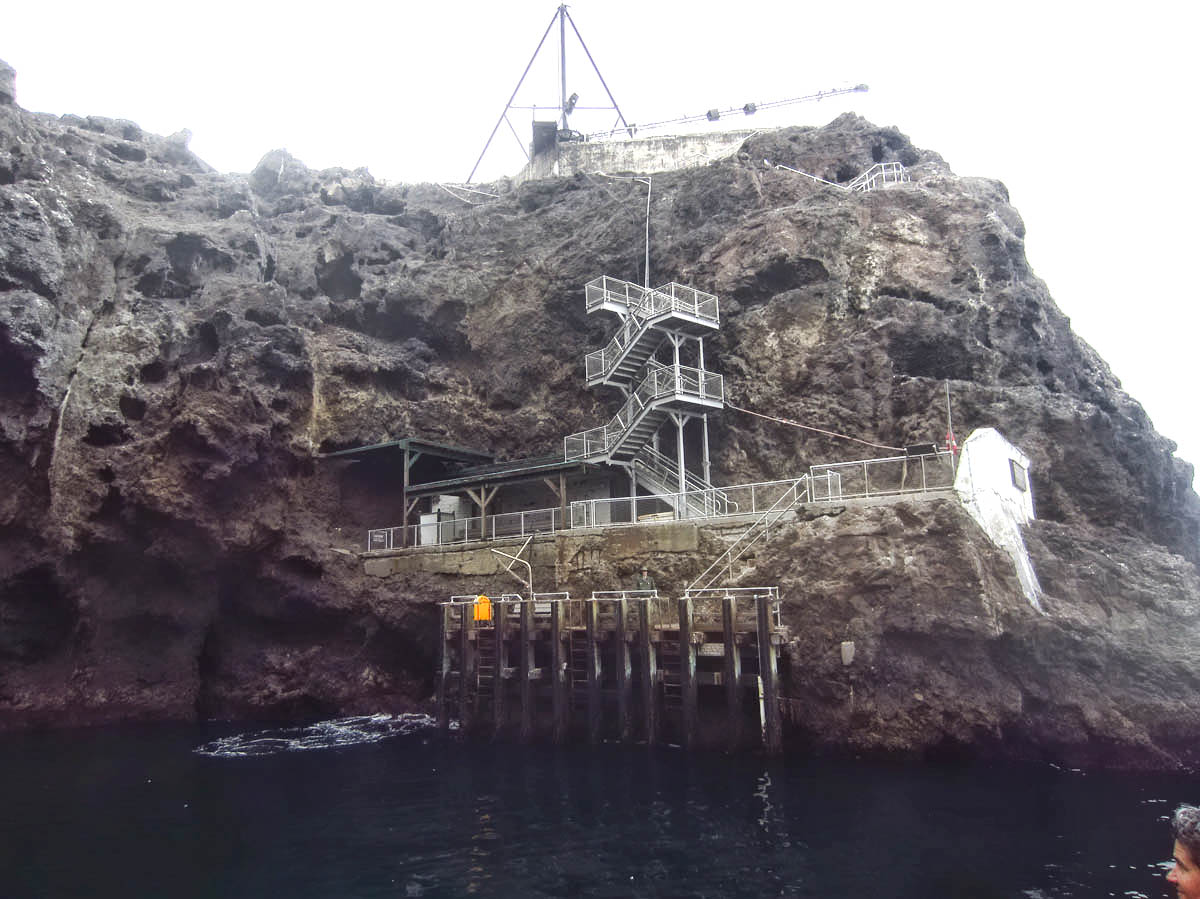 The only dock that accesses Anacapa. All visitors are pre-warned, you must climb the 157 stairs to see the island. I don’t think anyone stays behind on board, though some seemed tentative. 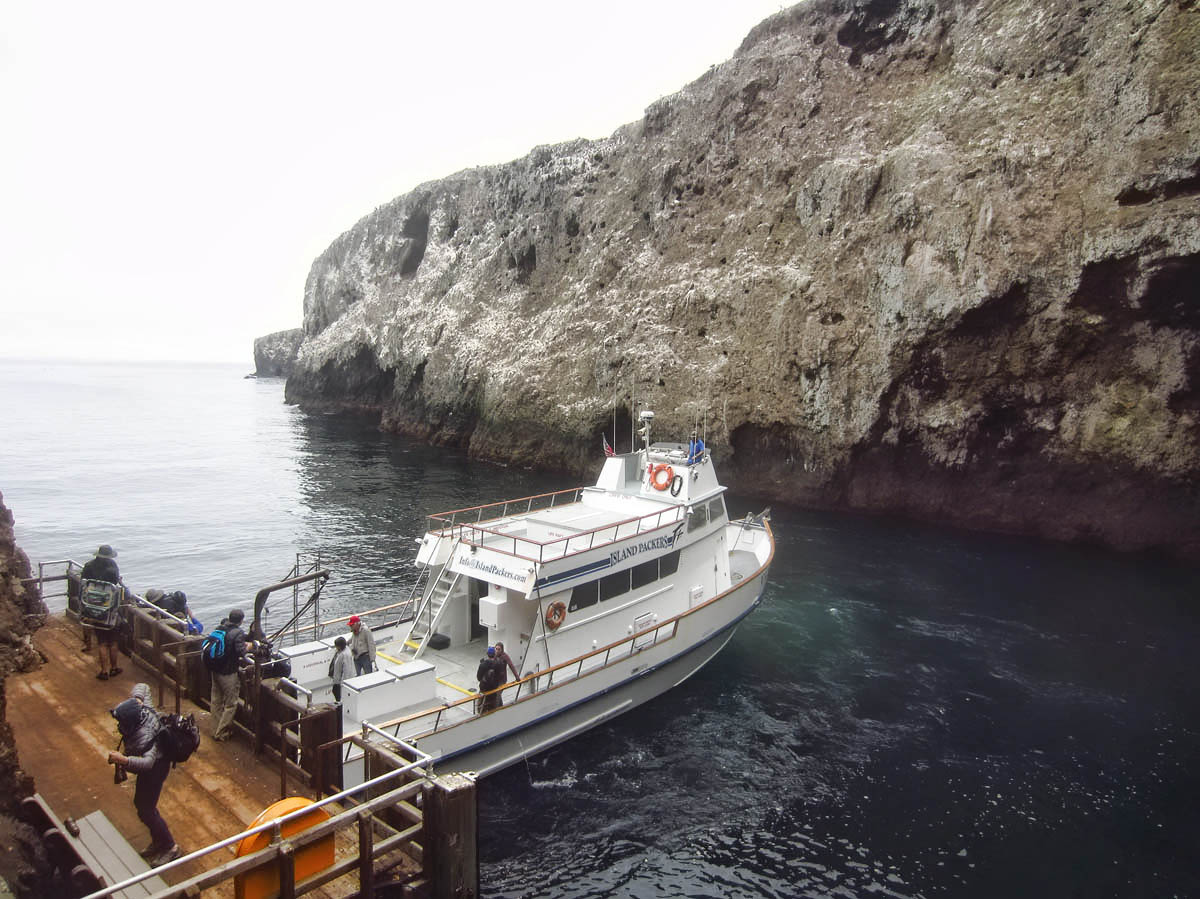 Penned in the tiny harbor while the Island Packers passengers disembark.

Once we reach the intermediate platform, we are met by Ranger Bryce for an orientation.   He tells us we are fortunate to have arrived in the peak of the western gull nesting season.  Turns out, Anacapa Island is host to the largest breeding colony of western gulls in the world.  And to think, I just came for the lighthouse… 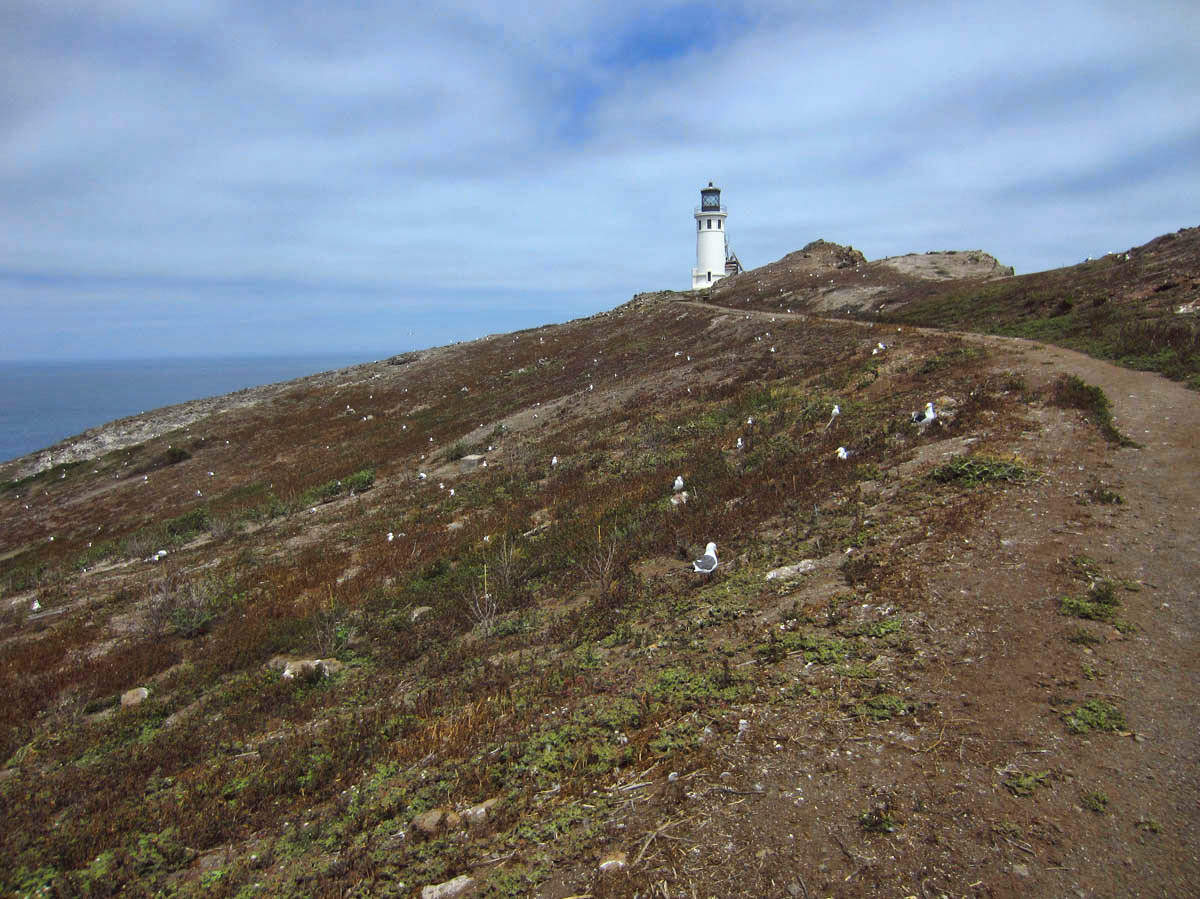 Upon arrival, I make the Anacapa Lighthouse my first stop. Check out all the nesting gulls! 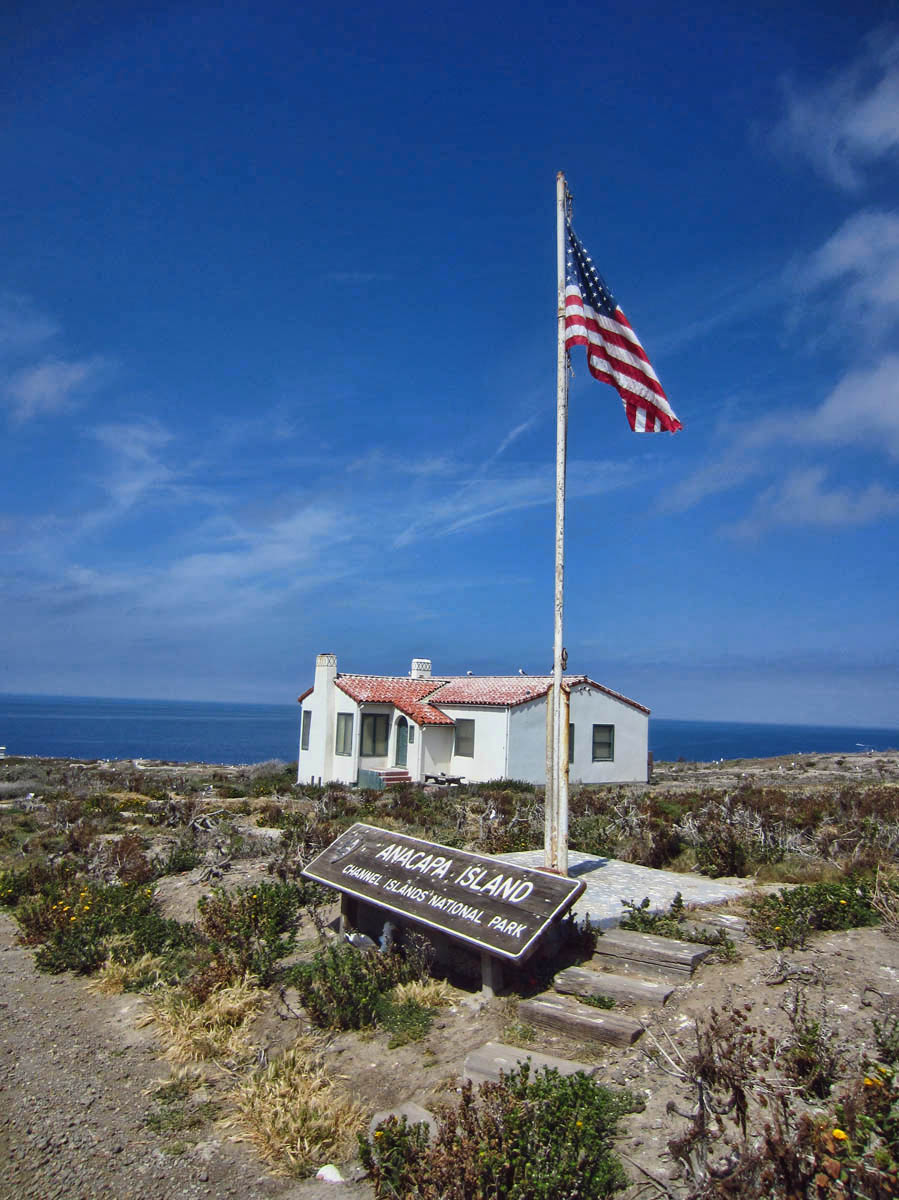 This has got to be the nicest lighthouse keeper residence I’ve seen, probably because it was the last to be built. Now part of NPS residences. Nice gig! 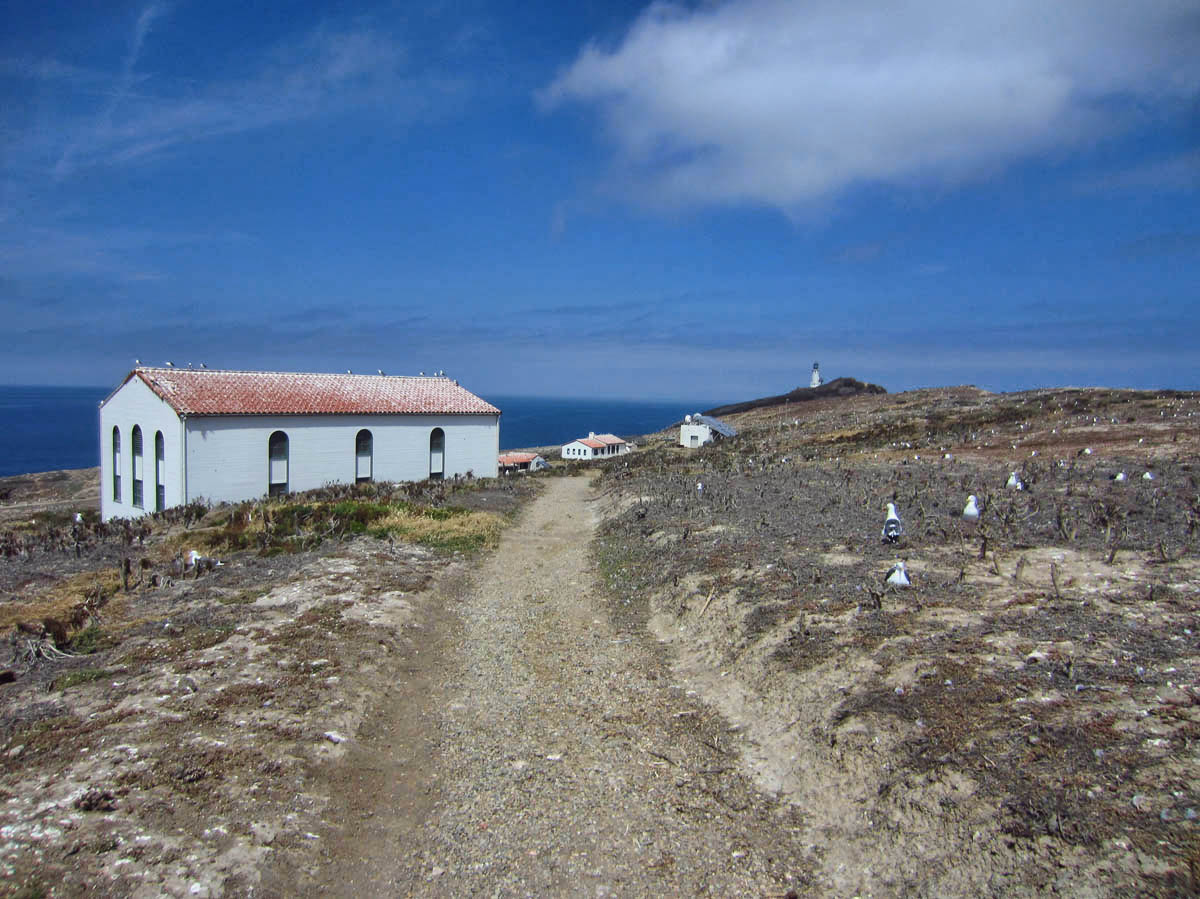 All former Coast Guard buildings follow the Spanish Revival (Mission) style. This largest one housed water tanks, but disguised to look like a church as as defense. 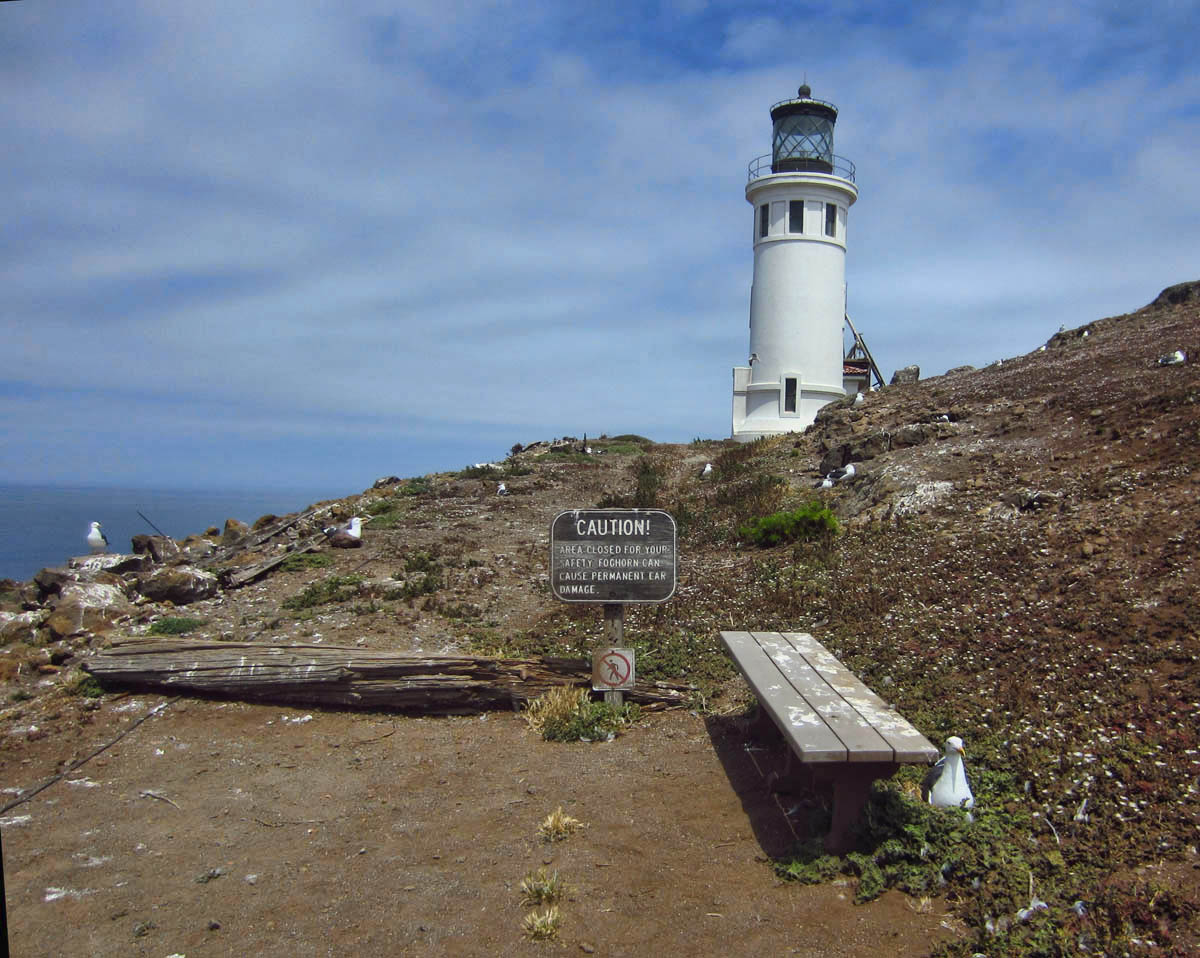 This is as far as visitors are allowed, as the sign indicates “Caution — Area closed for your safety. Foghorn can cause permanent ear damage.” WHAT?? I can’t hear you for the squawking gulls!

Ranger Bryce warns us that gulls are nesting right on the trail, and he’s not kidding!   He tells us to be prepared, as it will be quite a noisy visit.  Again, he’s not kidding!   He warns gulls can be very territorial when humans approach their nests, but considering they are lining the trails, well, we are coached on how to fend off!    His best advice is “If the bird is squawking, keep on walking!” 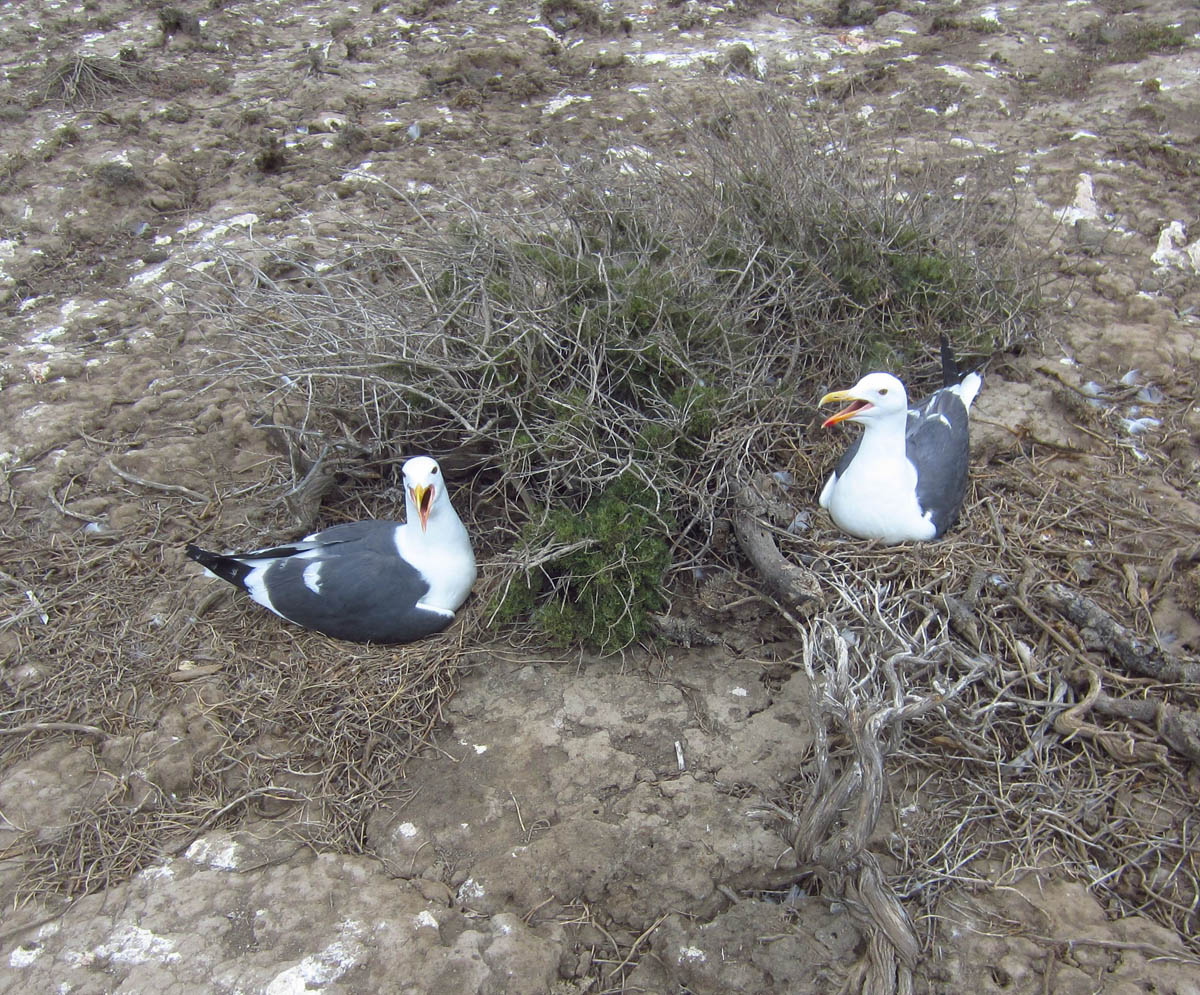 “Okay, Okay! I’m walking! My advice? Don’t build your nest so close to the sidewalk next time!” 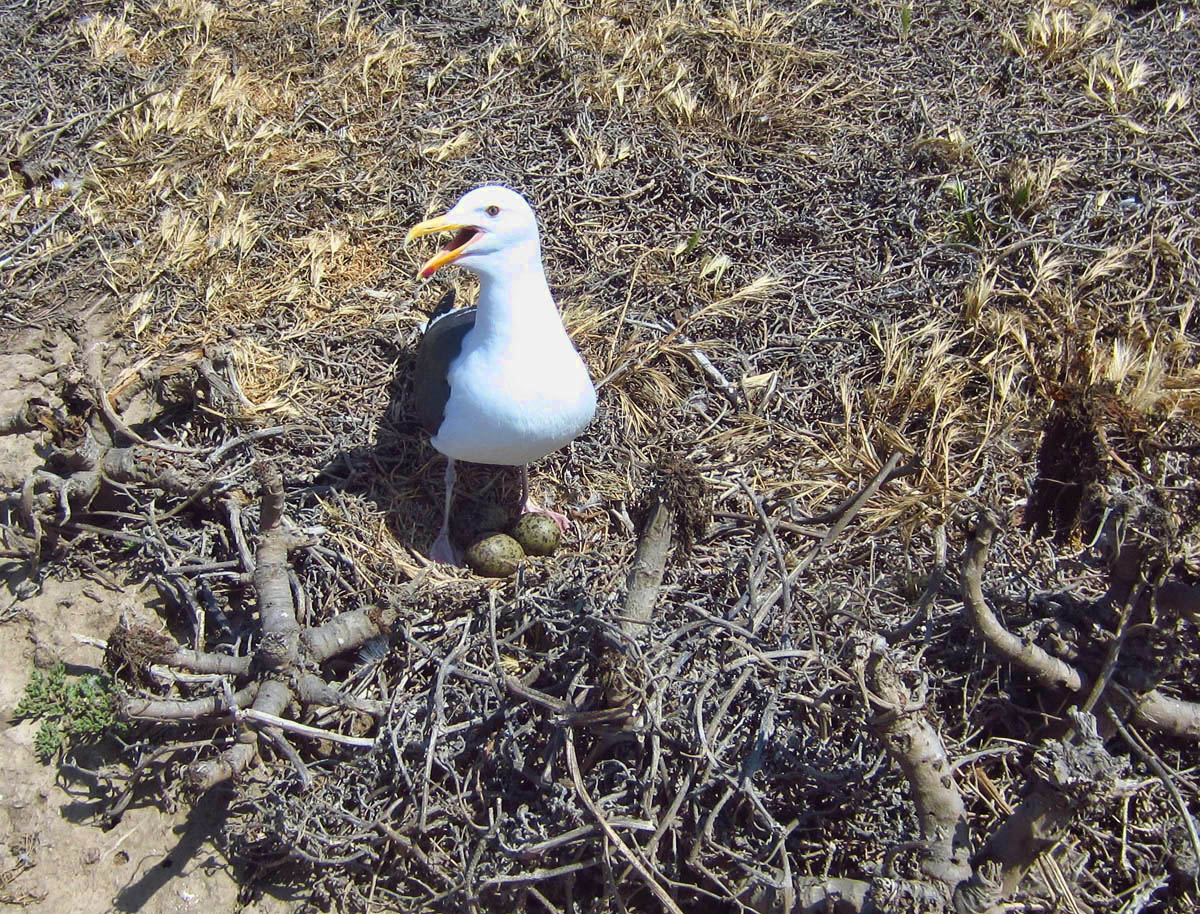 Note eggs beneath gull’s feet. Both sexes share in the incubation process. 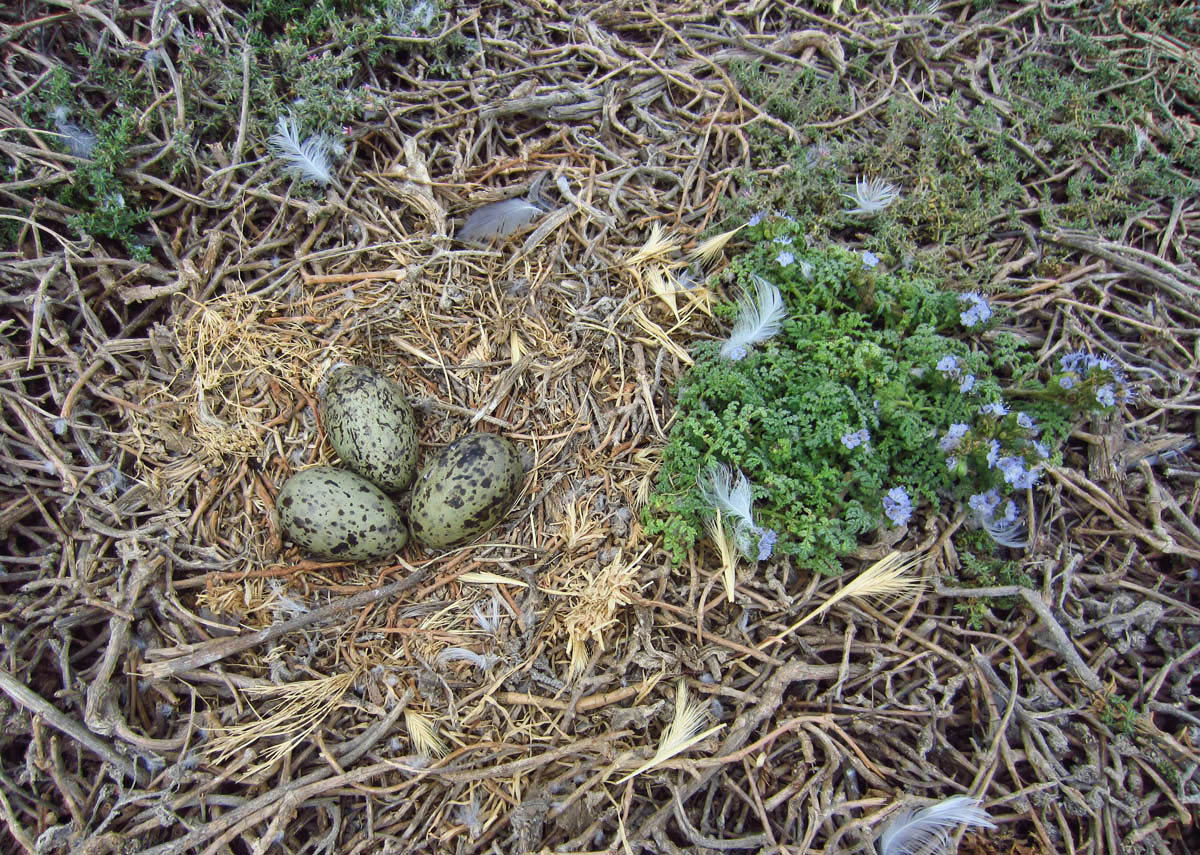 Hilarity ensues as we as a group start out walking, while the “largest breeding colony in the world” begins squawking!  What is equally hilarious is listening to the people talk back to them.  “Chill OUT!”  “Relax!”  “I ain’t gonna mess with you!” while others take a more nurturing stance, “It’s okay, baby…we won’t hurt you!”  We all seem a bit taken aback.  It’s a lot of squawking regardless of where we are walking! 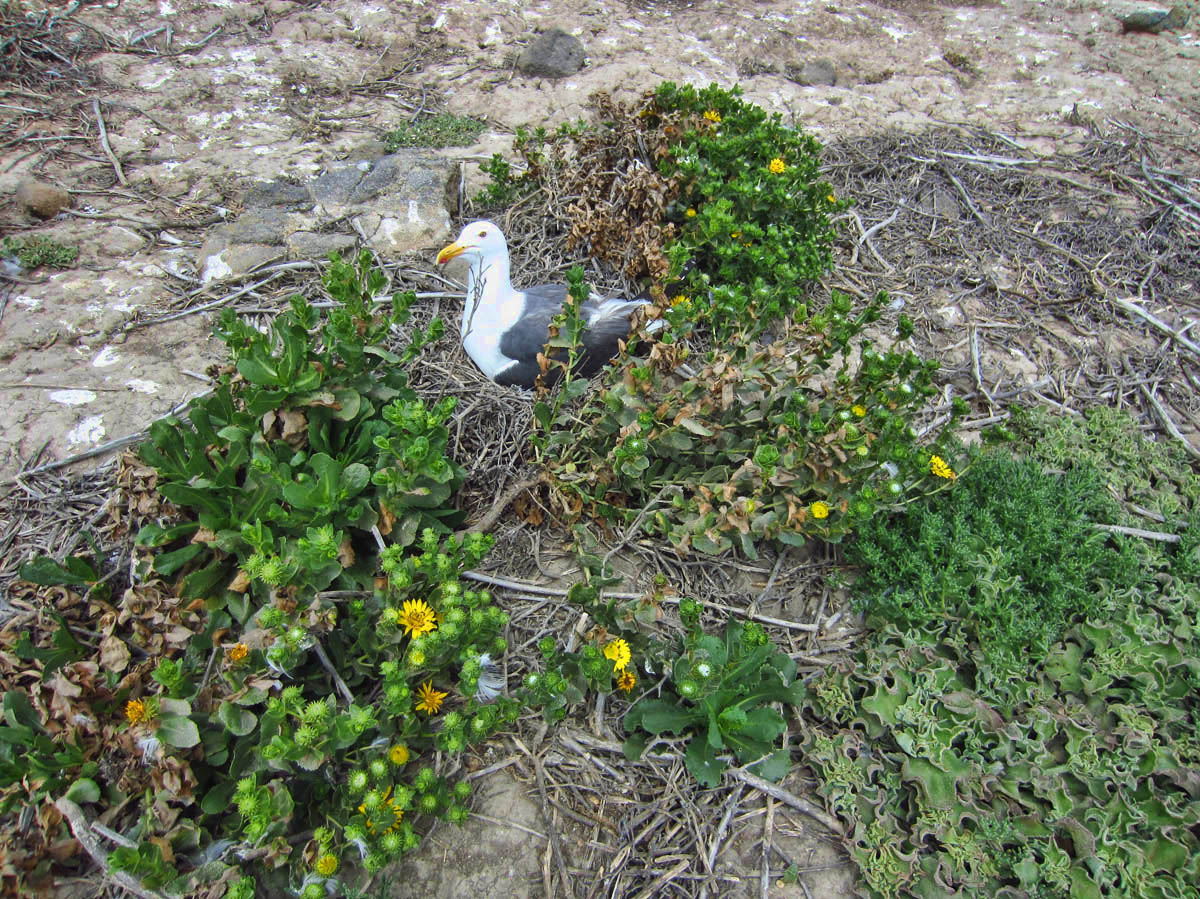 I like this gull’s style…building a nest surrounded by a flower garden! 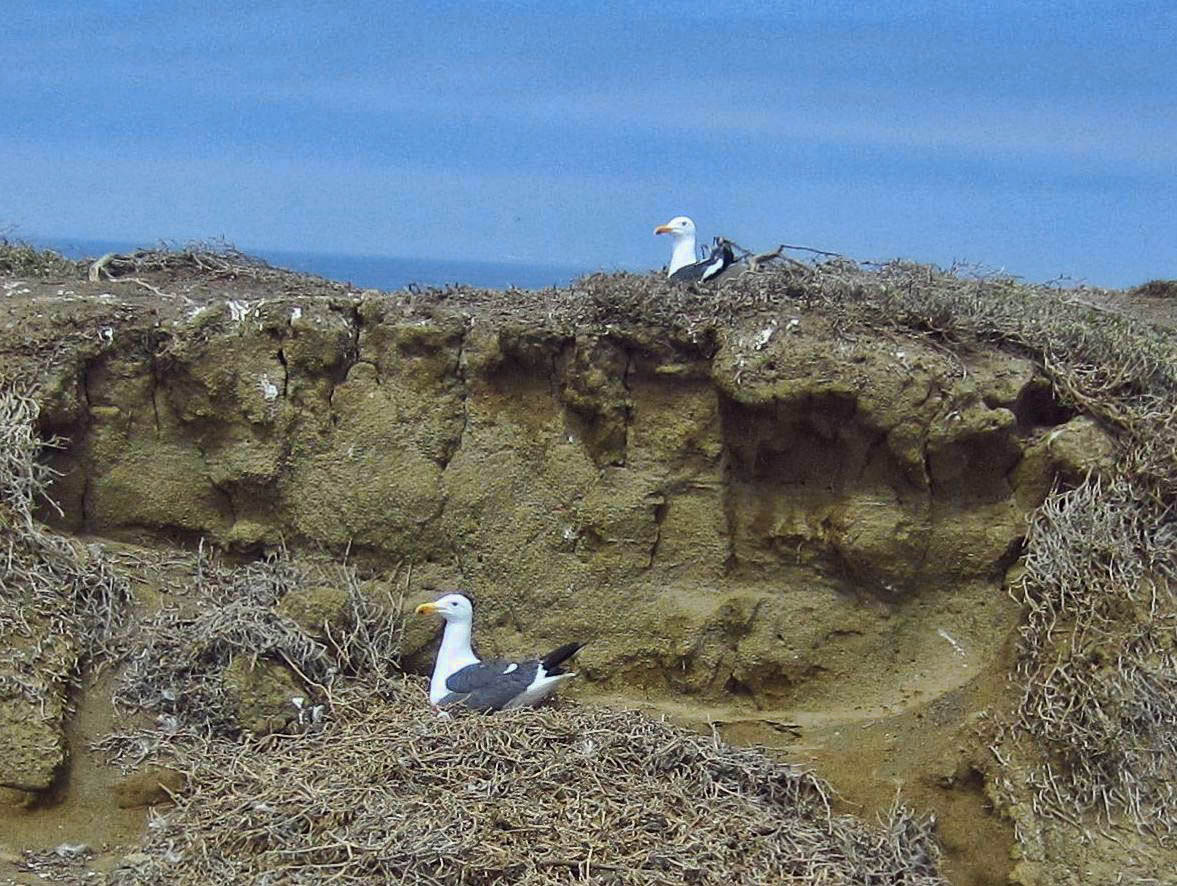 Male and female gulls are hard to tell apart by site, other than “who lays the eggs?” 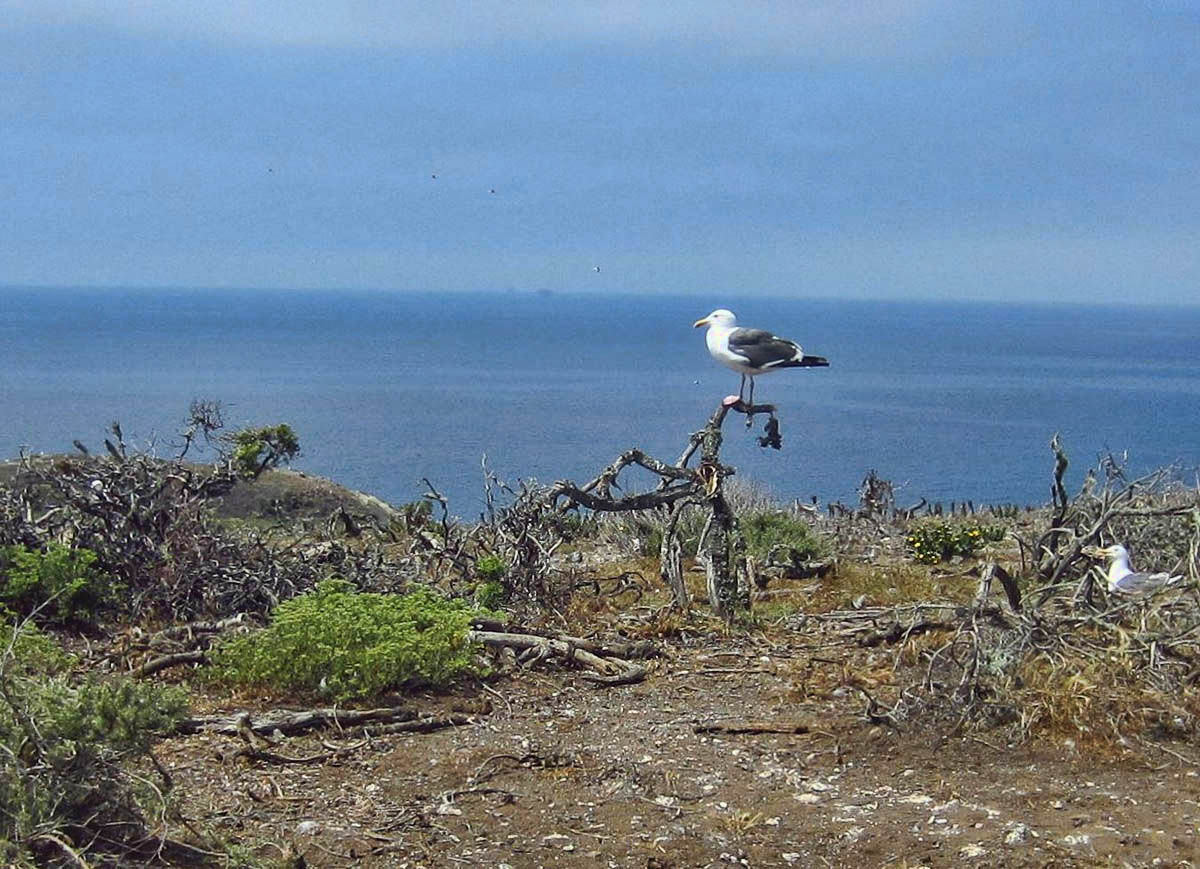 Both male and female share in responsibility of feeding the chicks. 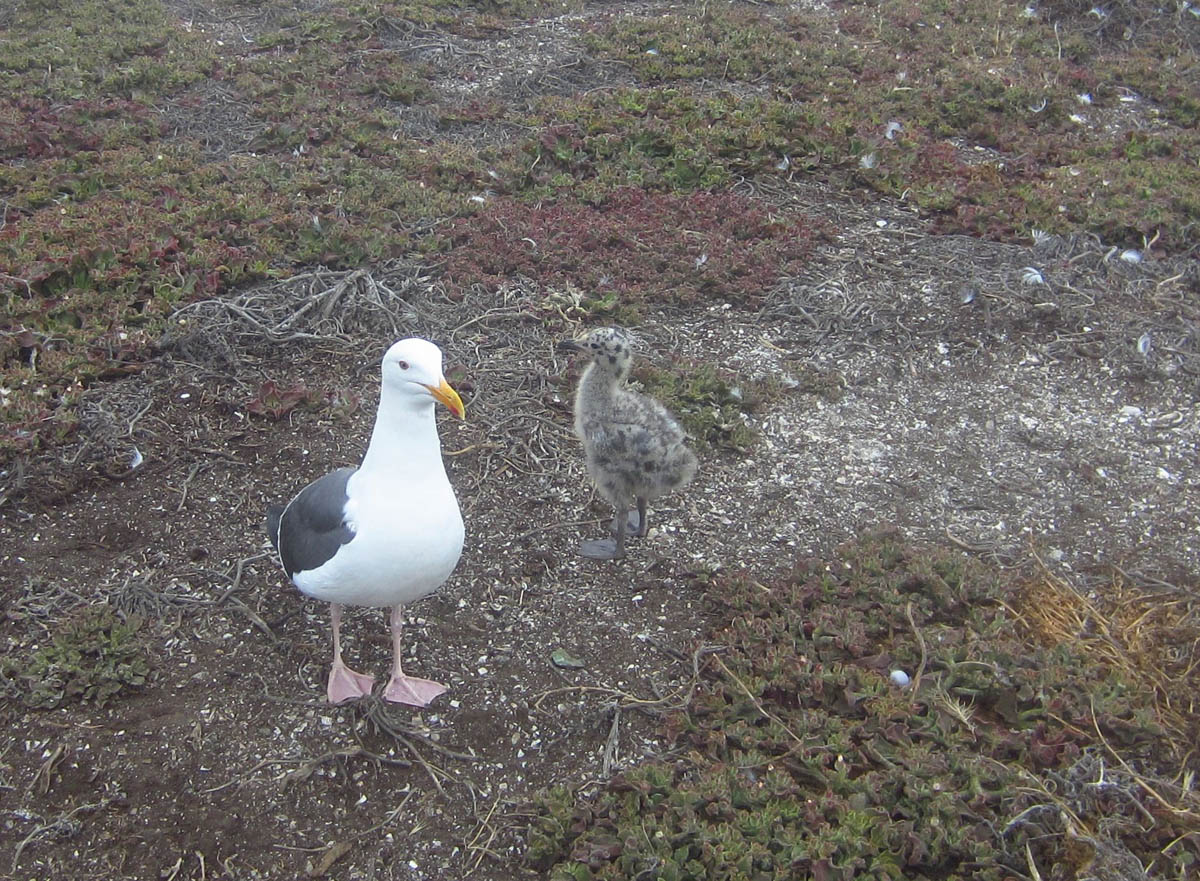 It’s tough to see the fledgling here….it is well disguised! Look dead center in the photo.

The Anacapa trail system offers only two miles of hiking, but what it lacks in quantity, it makes up for in quality as viewpoints overlook the sheer, steep cliffs.  Below, sea lions and seals are basking and barking on the rocky shores..   I decide to join Ranger Bryce’s talk in spite of the crowd following him, because I am fascinated by these gulls which always seem so illusive on the beach, yet now won’t move out of my path.  😉   His walking tour takes us out to Inspiration Point, which certainly lives up to its name. 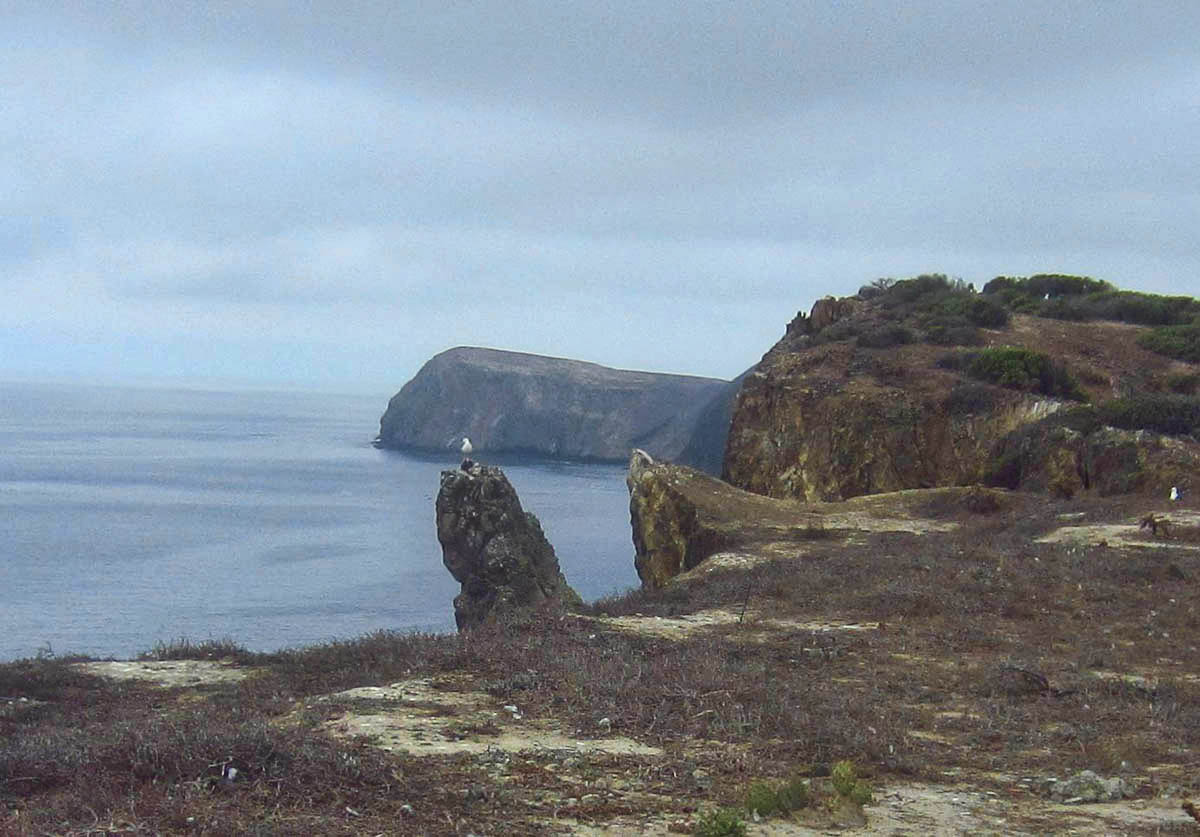 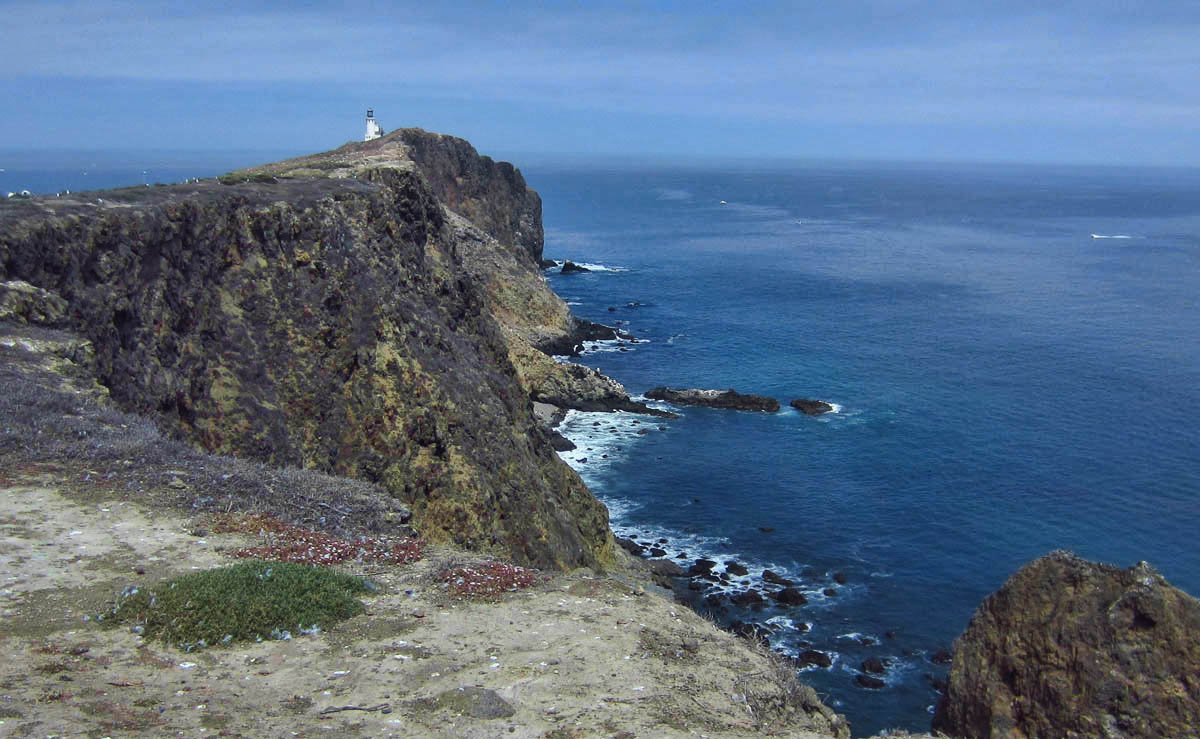 Looking back over sea lions on the rocky shore. 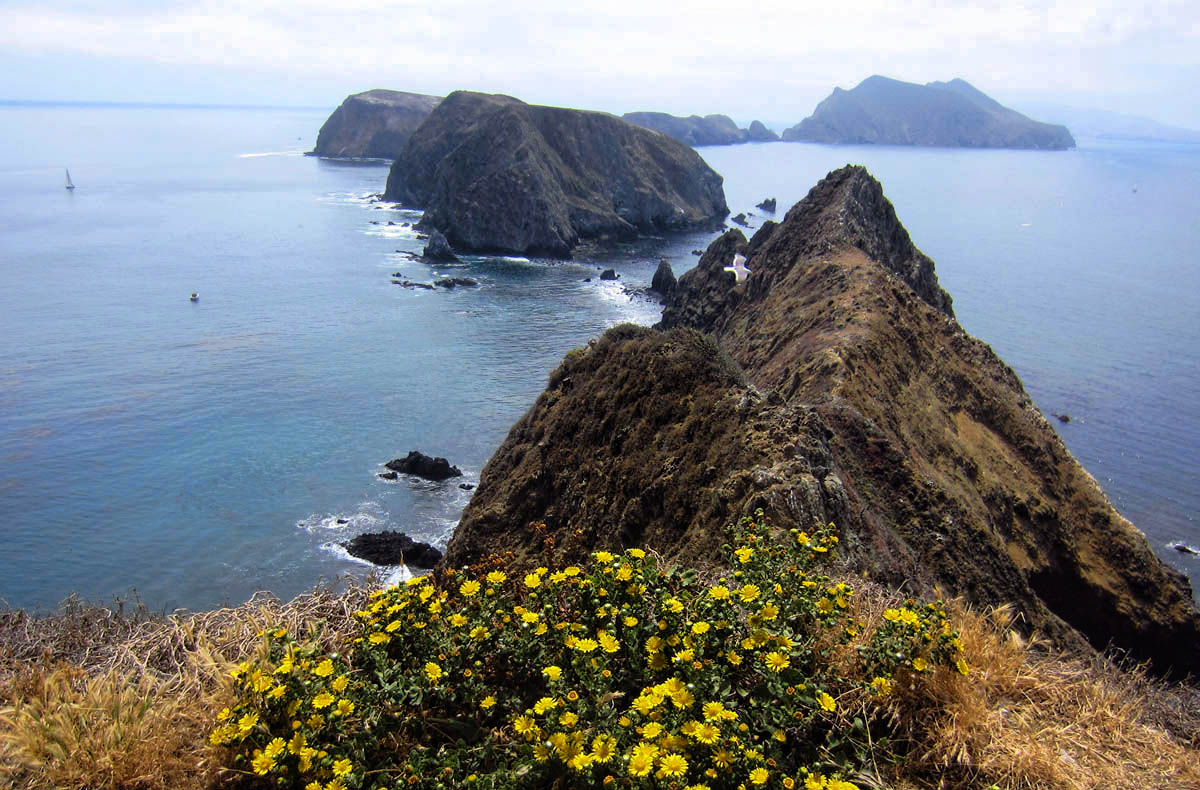 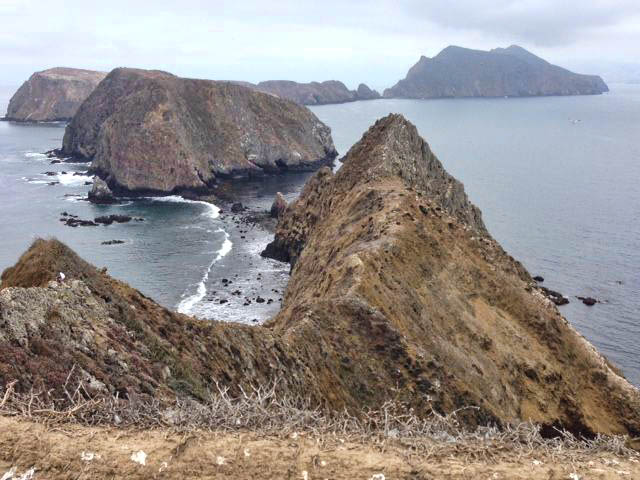 Do you know there is no such bird as a “seagull?”  That is just their layman’s term.  Each different member of the species has its own name and distinguishing characteristics.   Bryce points out the only chick on the island that has hatched, and asks us to give it a wide berth….the proverbial “early bird” is getting all the attention. 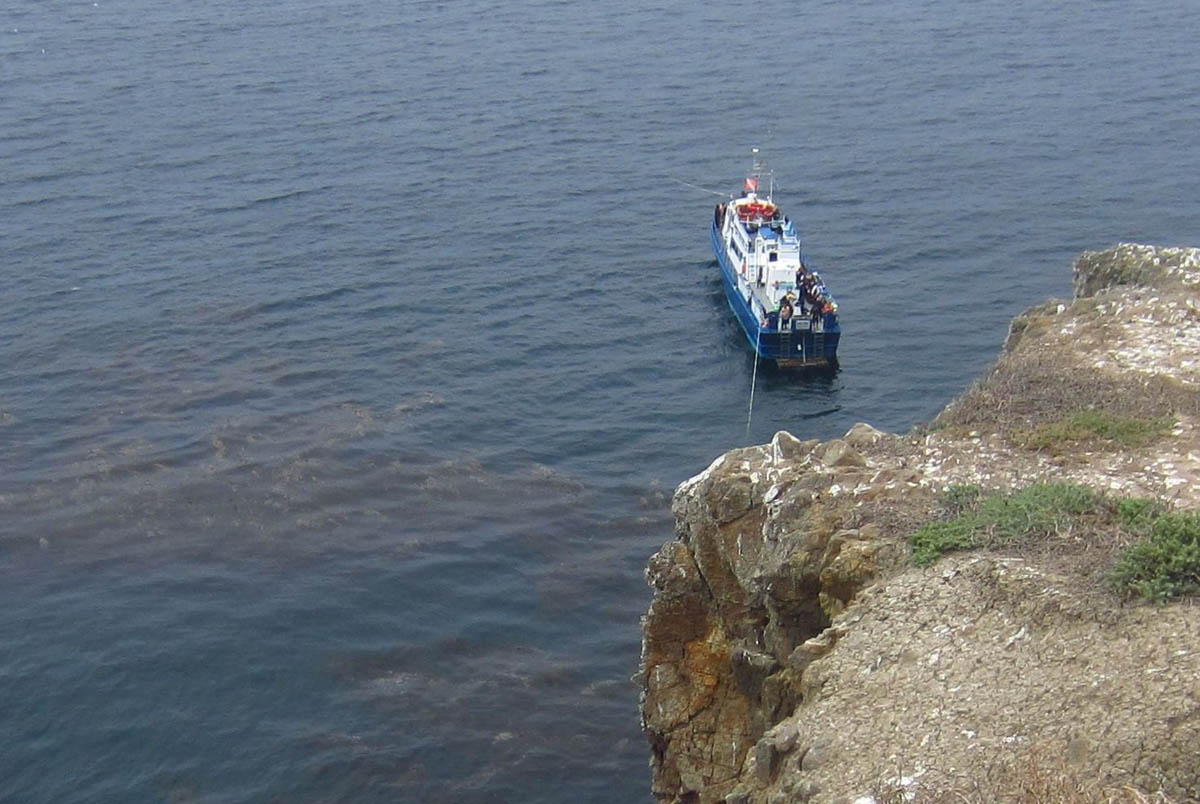 Dive boat with divers about to enter water to explore kelp beds. 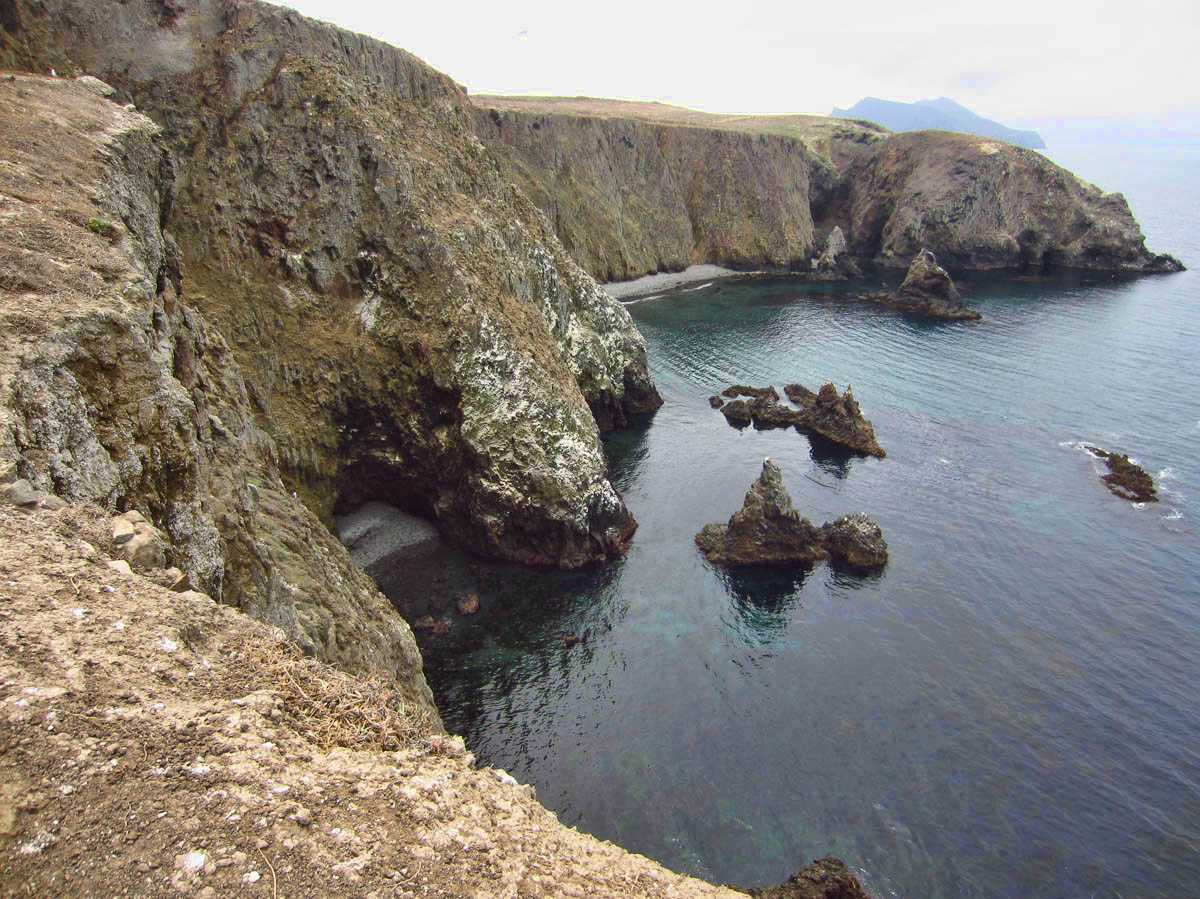 Returning back by way of Cathedral Cove overlook. Too bad my camera does not show the two sea lion youngsters playing below on the small rocks near the shore. 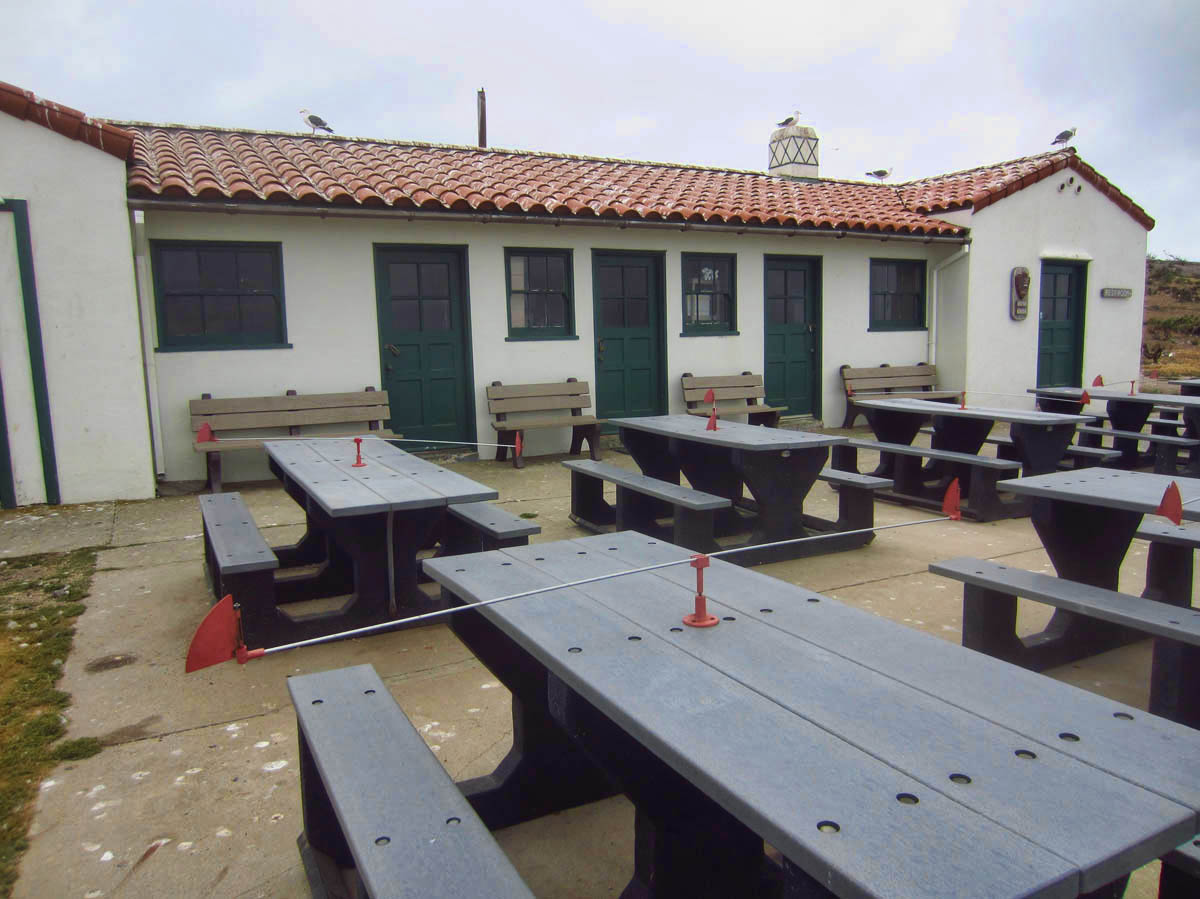 These whirligig things on the picnic tables at the Visitor’s Center discourage gull roosting, thankfully.

I save the best for last…a stop by the Visitor Center to see the gleaming, polished prisms of the original 3rd Order Fresnel lens.  Once serving as a beacon to guide ships for 60 years, has been lovingly restored and is now on display as the jewel in the crown of the tiny Anacapa Visitor’s Center inside one of the historic Coast Guard buildings. 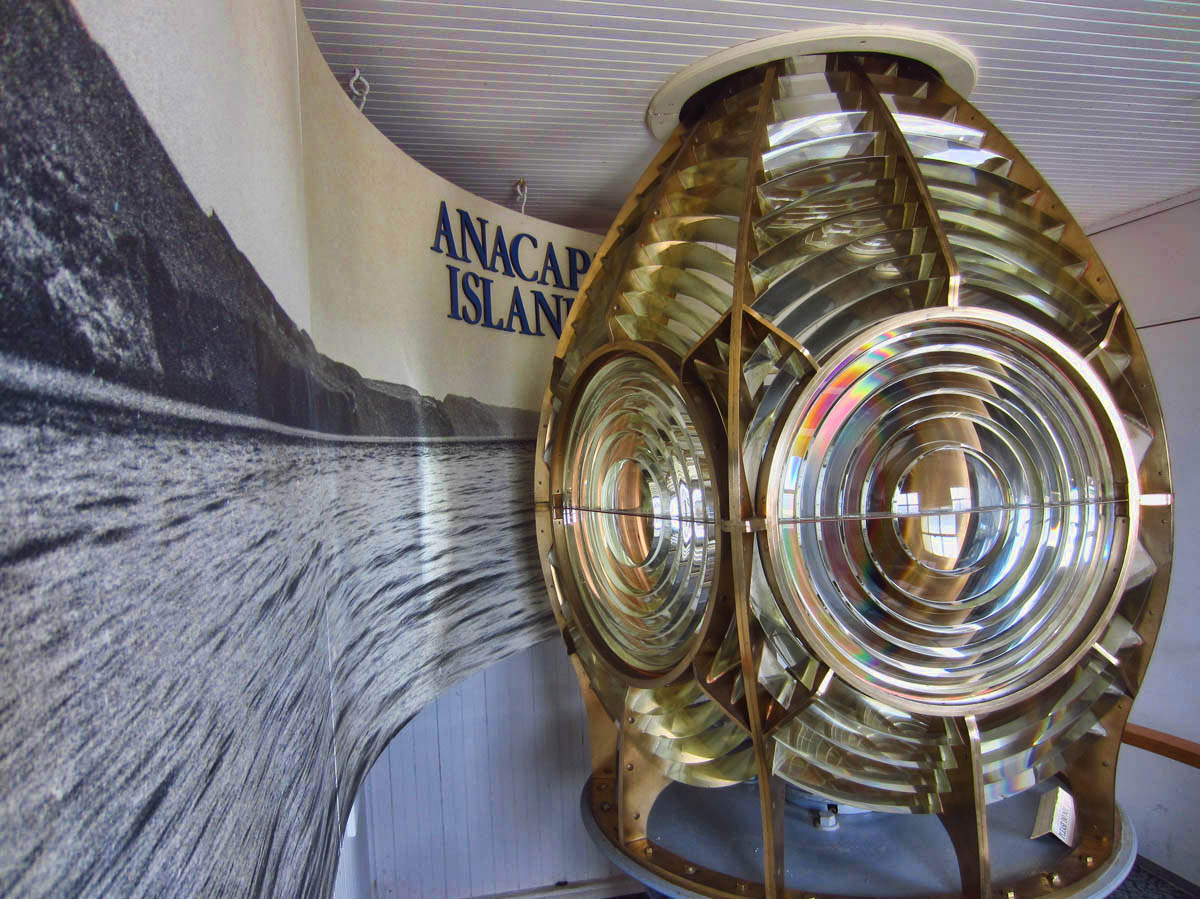 “The multifaceted crystal lenses, bound in polished brass, are still among man’s most beautiful creations. A static display of a lighthouse lens in a museum, however, is similar to viewing an animal in a zoo. Once removed from its natural habitat it’s never quite the same. I get chills remembering foggy nights when the sweep of the powerful light flashed through the mist, illuminating a small part of the sky.”
~ James W. Baker, Lighthouse Keeper, 1956 (composed after his return visit to the island in 2001.) 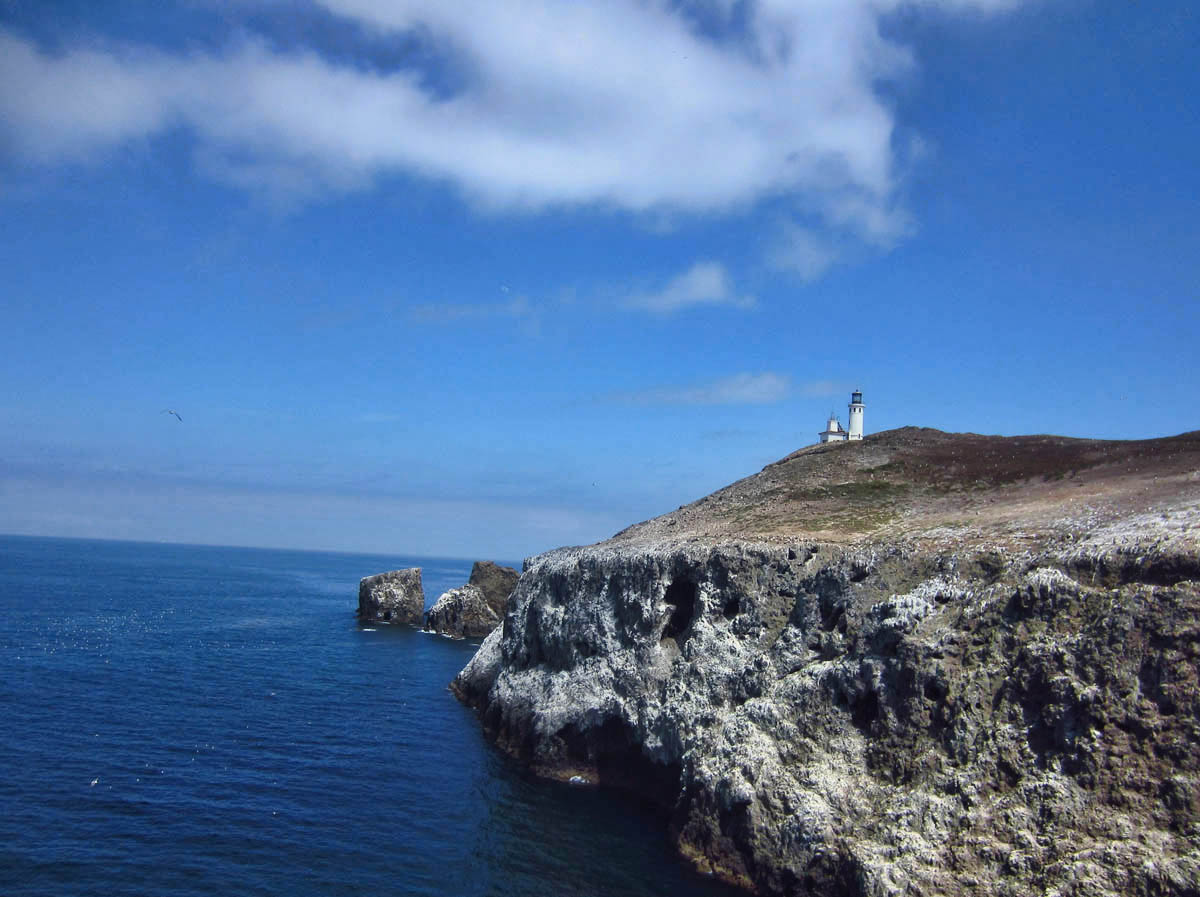 As we head back to the Island Packers boat for departure, the “May Gray” skies have cleared. 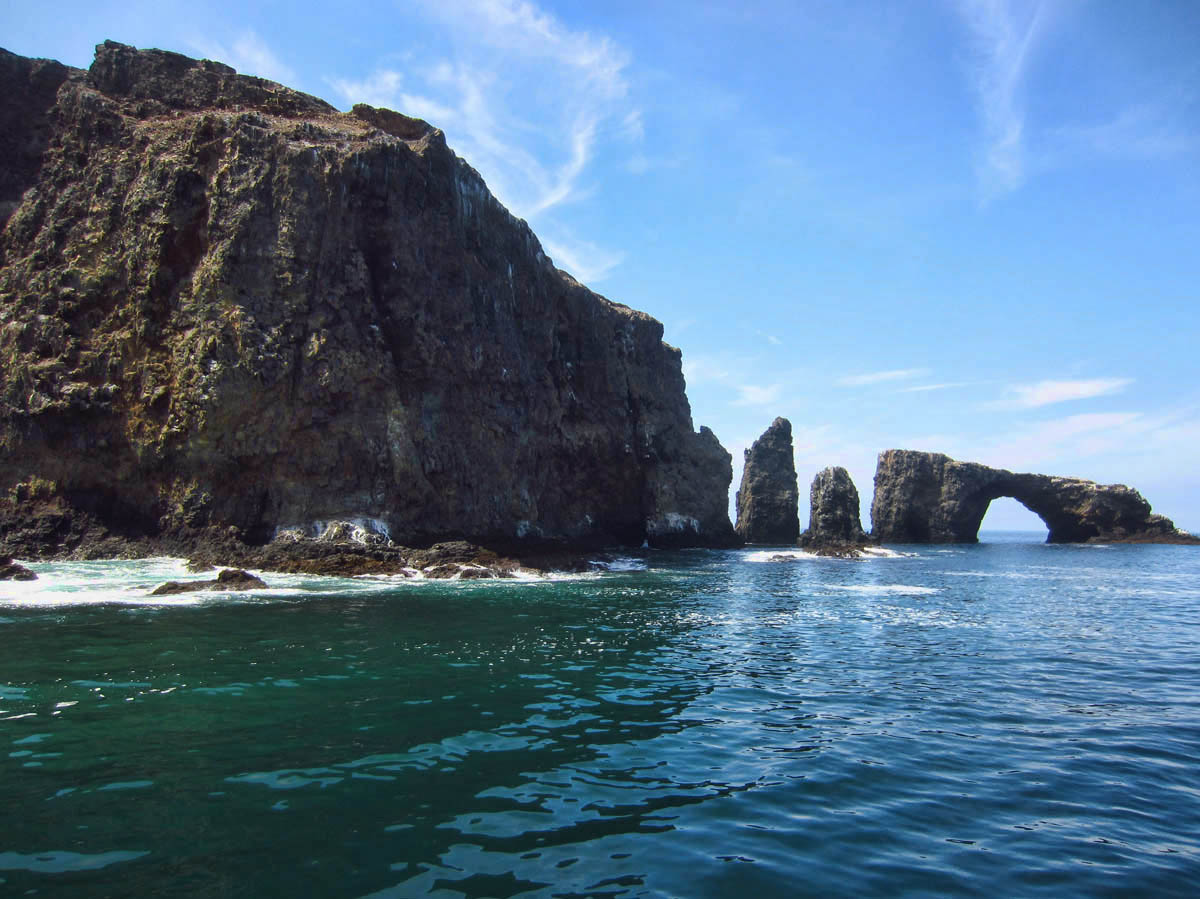 Backside of the island, location of the sea lion rookery. 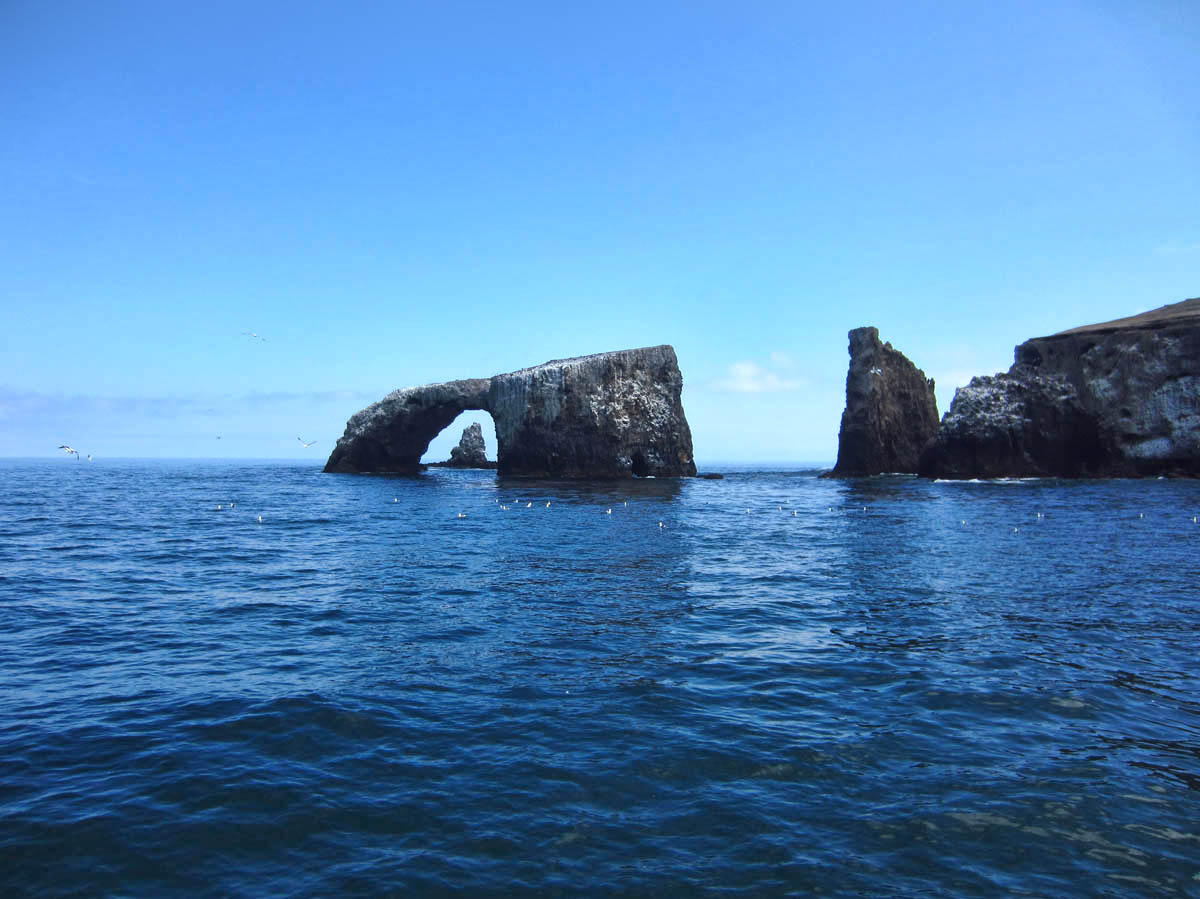 The Captain circles the iconic Arch Rock for photo ops before we head toward home.

“Don’t believe what your eyes are telling you. All they show is limitation. Look with your understanding. Find out what you already know and you will see the way to fly.”
~ Richard Bach, Jonathan Livingston Seagull

13 thoughts on “And Finally, When One Island Just Isn’t Enough…”