Roll the tape back to the night before I am to depart on the 9:00am ferry for the Channel Islands camping trip. I have just learned that what I thought was a simple gray water leak turned out to be my entire hitch and holding tanks hanging by a single bolt. I am pacing the floor trying to make a decision over whether to continue on with my last minute packing required to cover every conceivable need for the next three days, or bag the Channel Islands camping trip and stay behind to face my problem. I am having an anxiety attack. Literally. I cannot breathe. I am in the middle of a mini-breakdown when a “ping” comes in from Facebook Messenger. It’s my friend Kathy from Lake Havasu: 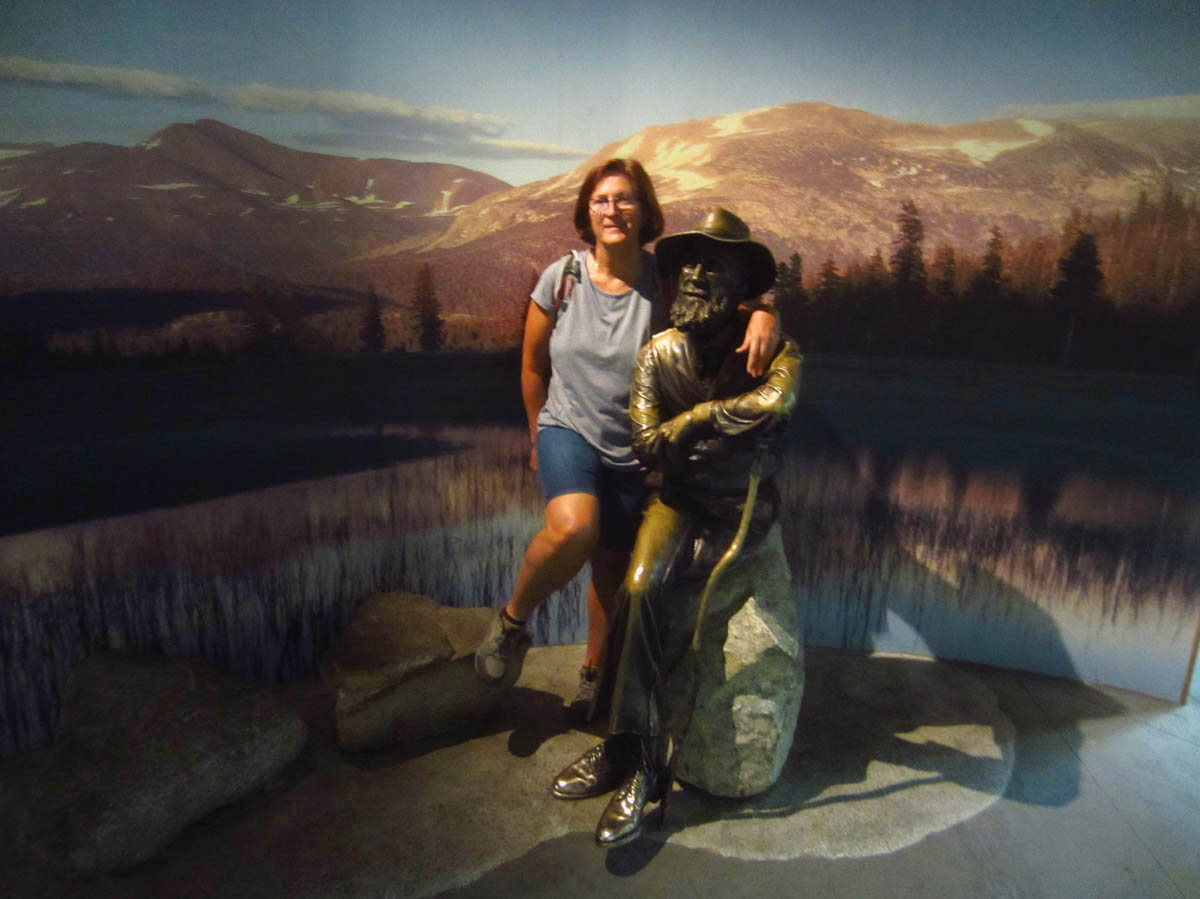 Having a chat with the Scotsman, my old friend John Muir. 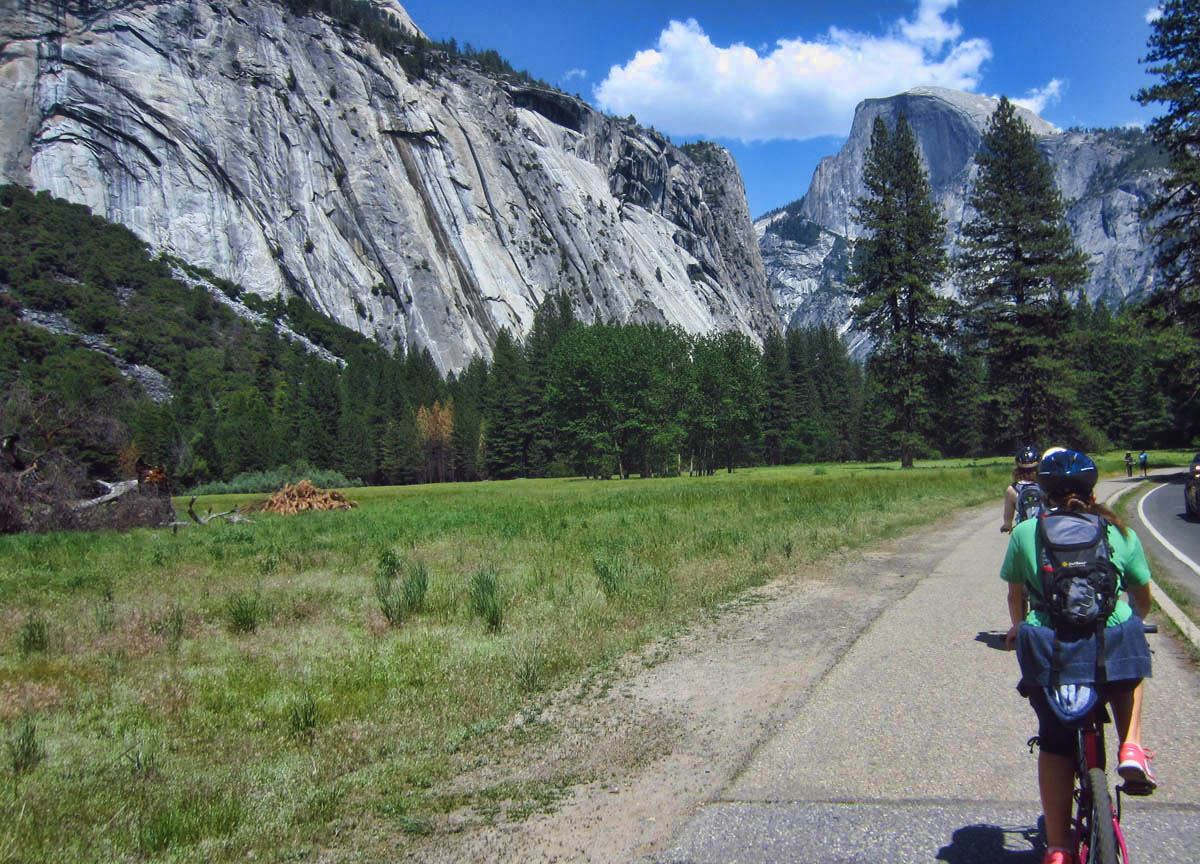 Riding a bike in Yosemite Valley, it’s hard to keep my eyes on the road! Too much beauty in every direction. I tell Joey to take the lead so I can sight-see behind her. 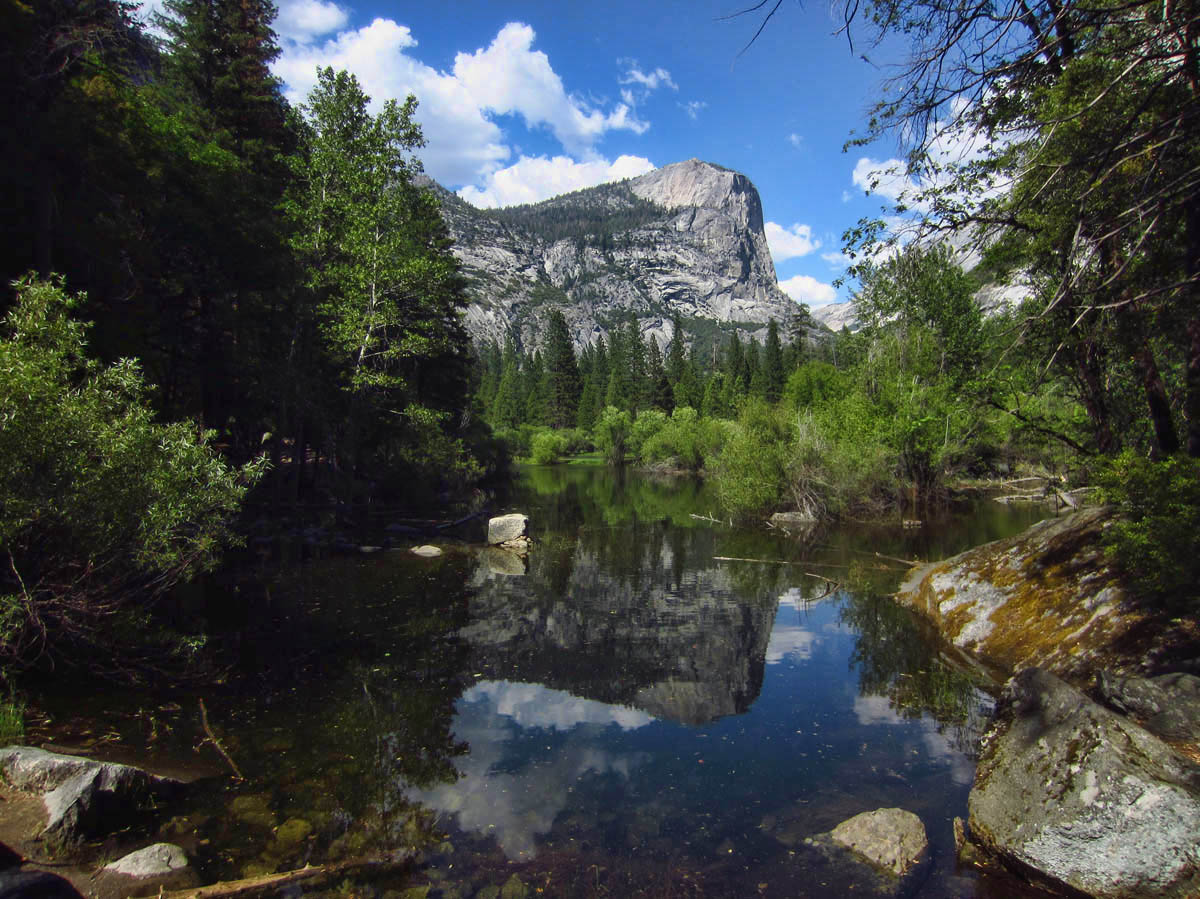 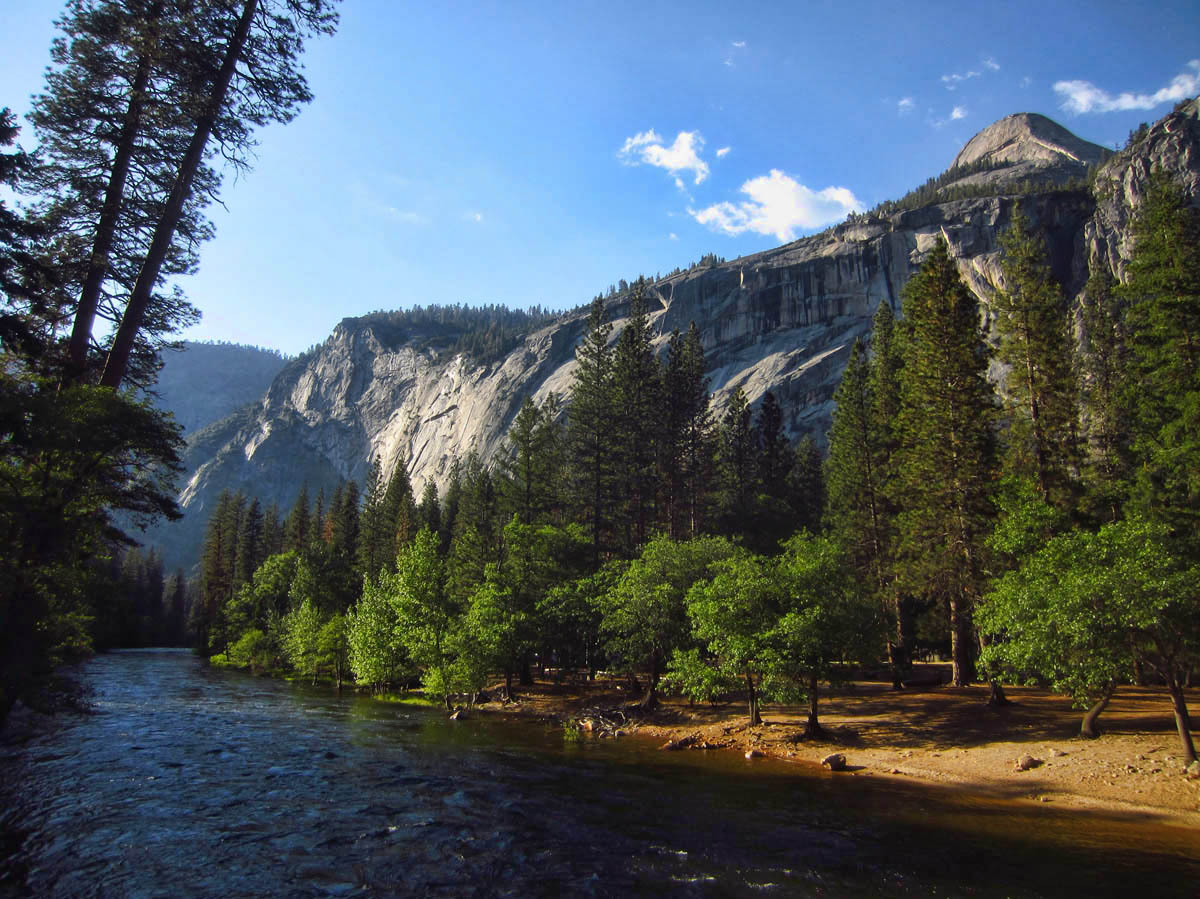 I have been checking the reservation.gov site at least once a week for the past three months, hoping something in Yosemite Valley would open up. I have only been into Yosemite as far as Olmstead Point over Tioga Pass from 395…never into the valley, so I am eager to go. I don’t dare let on to Kathy that my entire undercarriage is hanging in the lurch right now, meaning I might not have a way to get there. I’ll find a way! 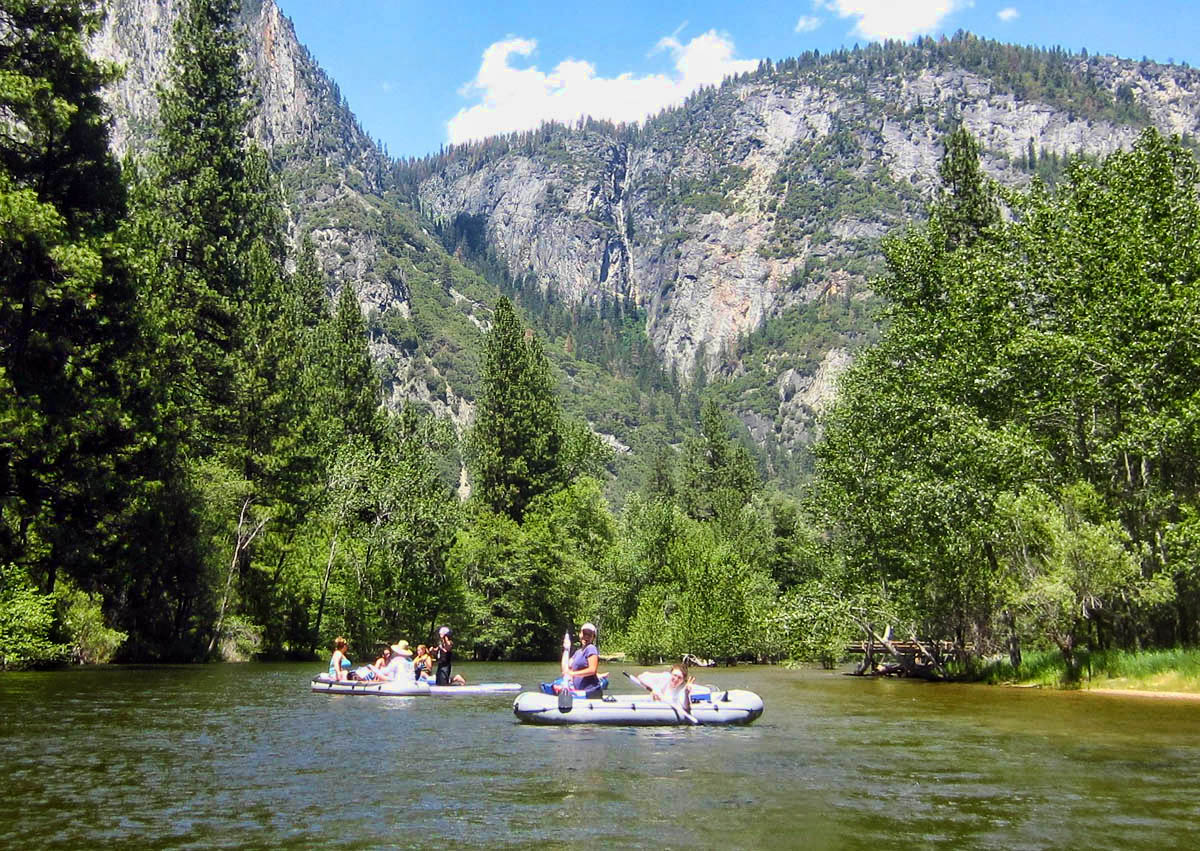 Rafting the Merced River that runs through Yosemite Valley 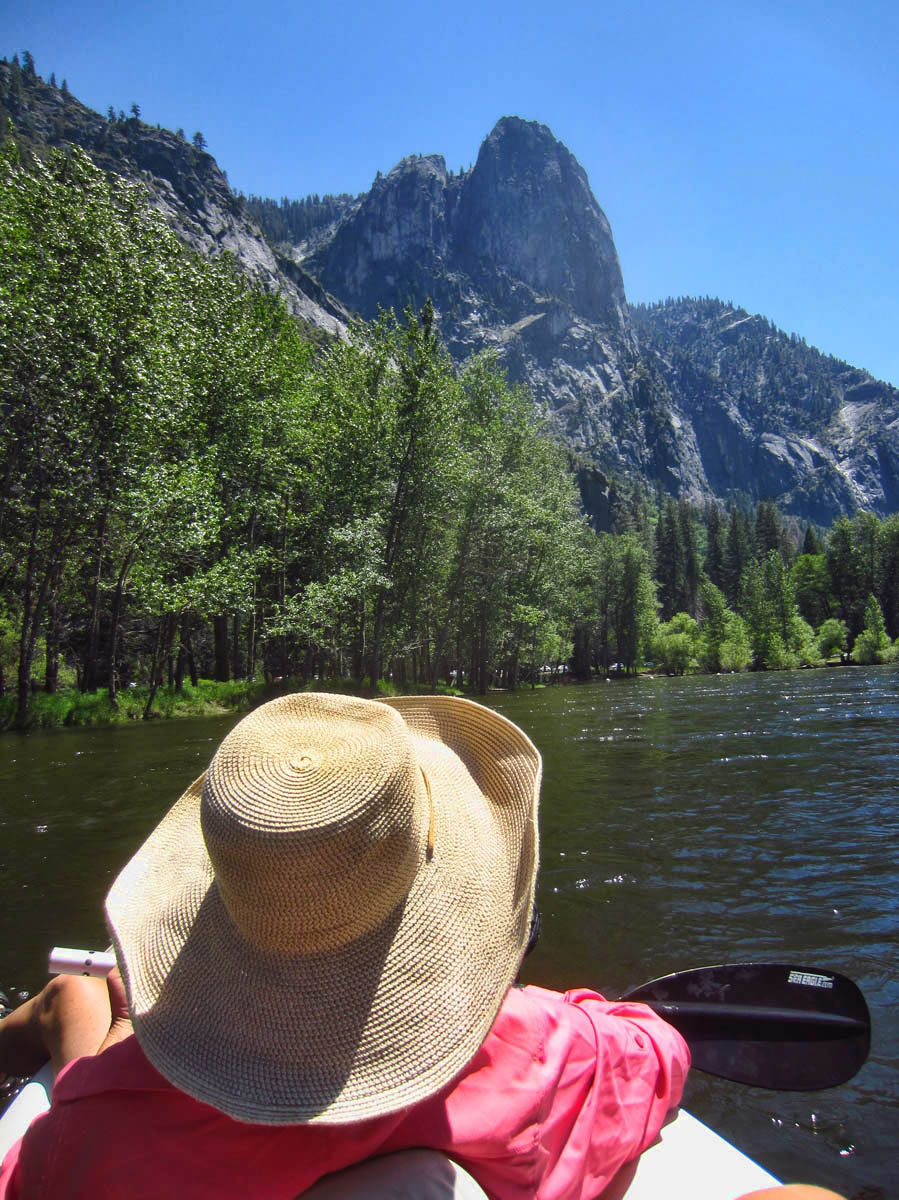 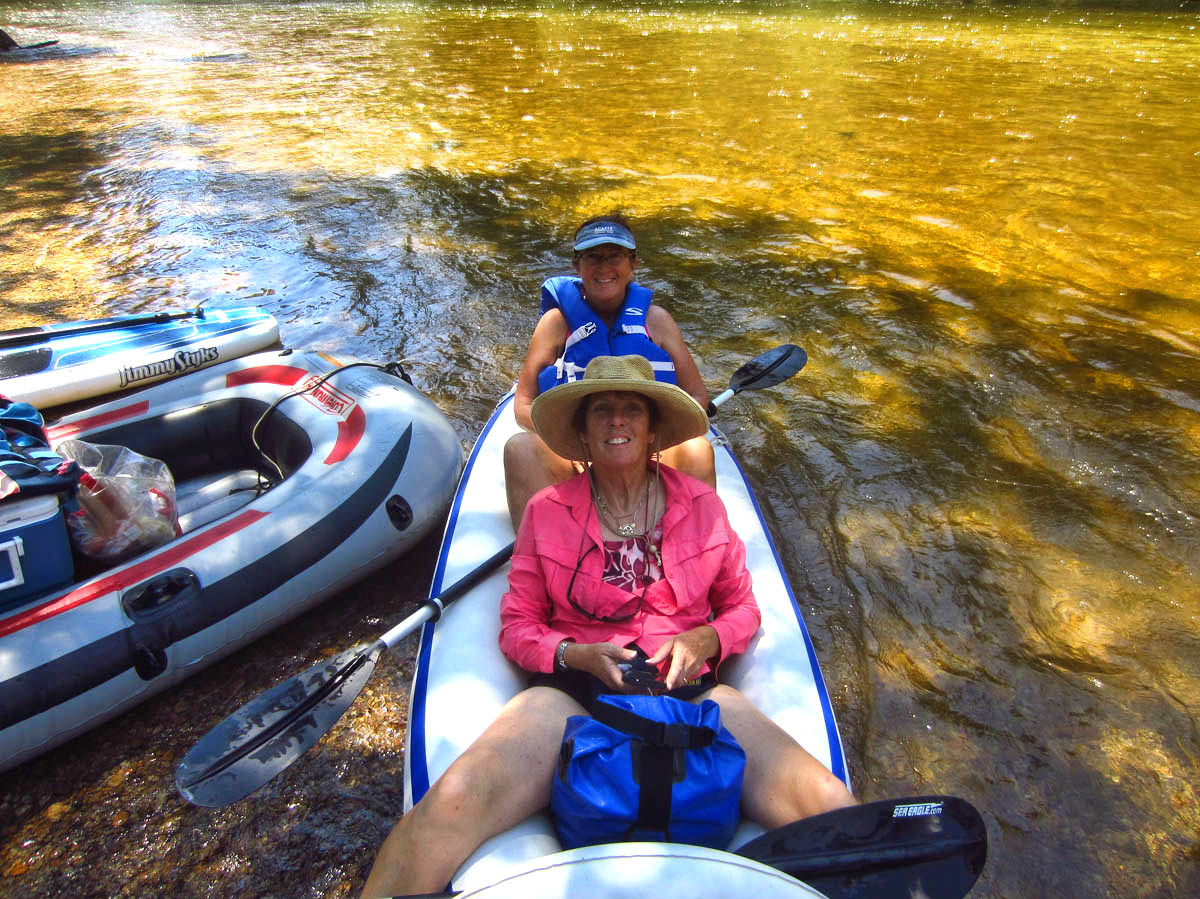 Testing out whether the Sea Eagle really is a 2-person kayak. 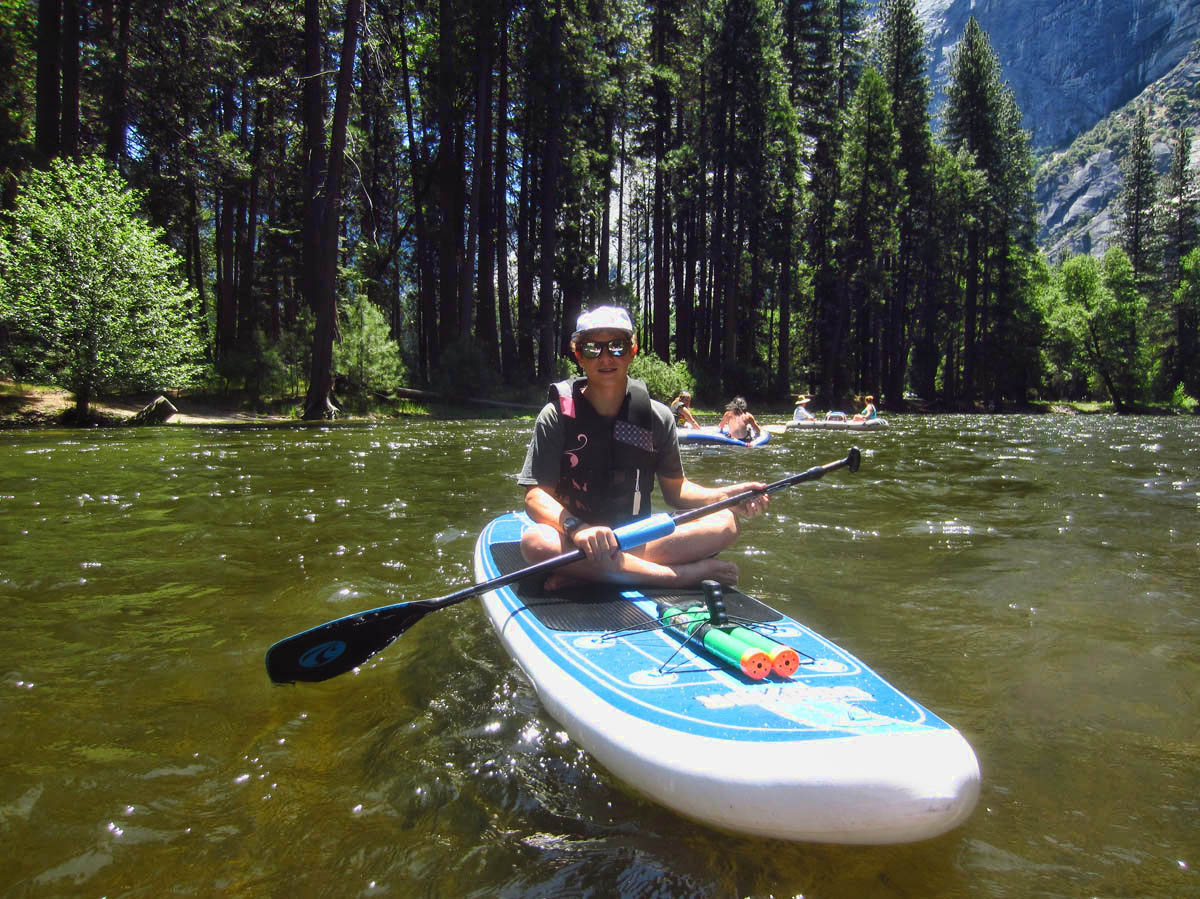 Jona opts to raft the river on a stand-up paddleboard. (Notice he is packing heat.)

I don’t want to pressure Justin at Barber RV, but I do tell him about my plans. “I don’t want to rush you, as I want the job done right. But if it looks like it’s not going to be done in time, please let me know so my friends can find someone to take the space.” He reassures me, “No guarantees, but I’ll do what I can.” 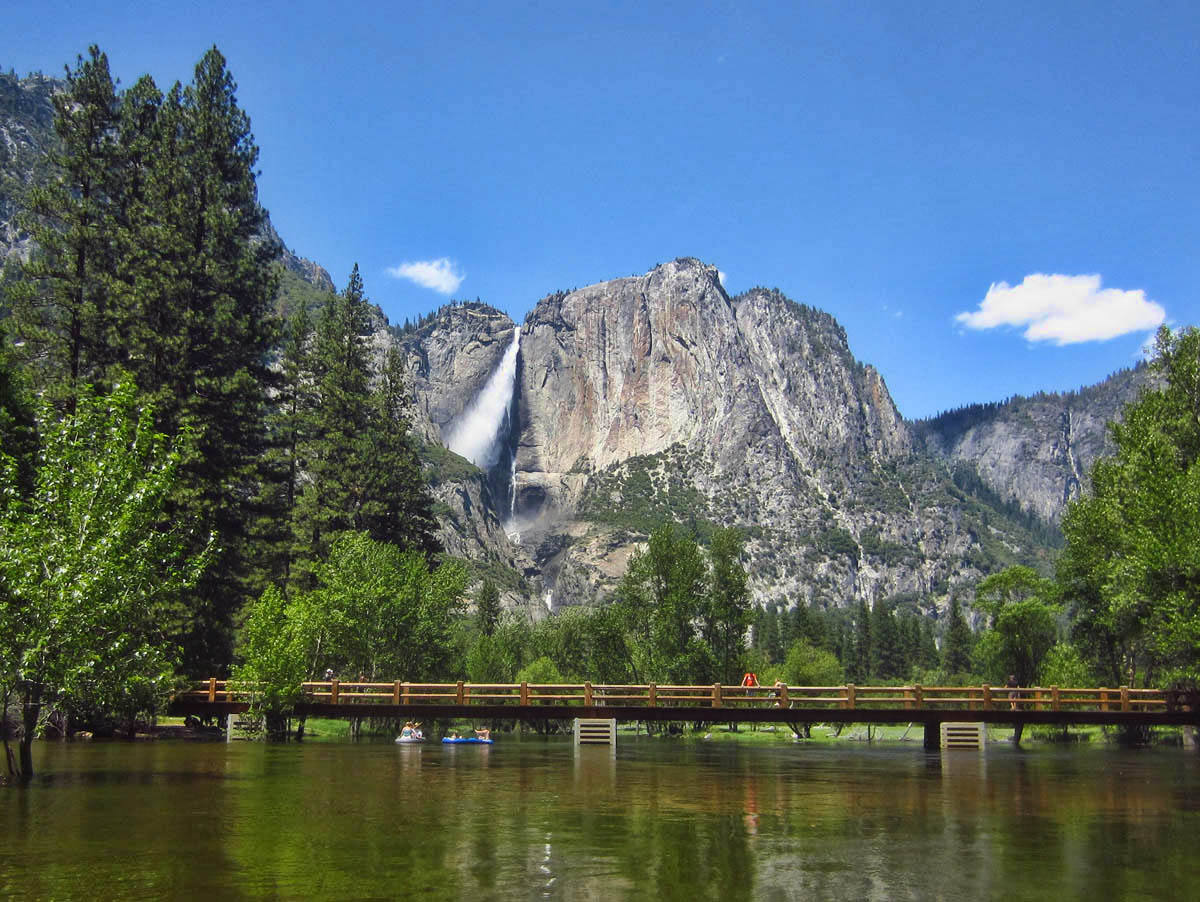 It’s pretty incredible to be rafting with views of Yosemite Falls in front and Half Dome behind. 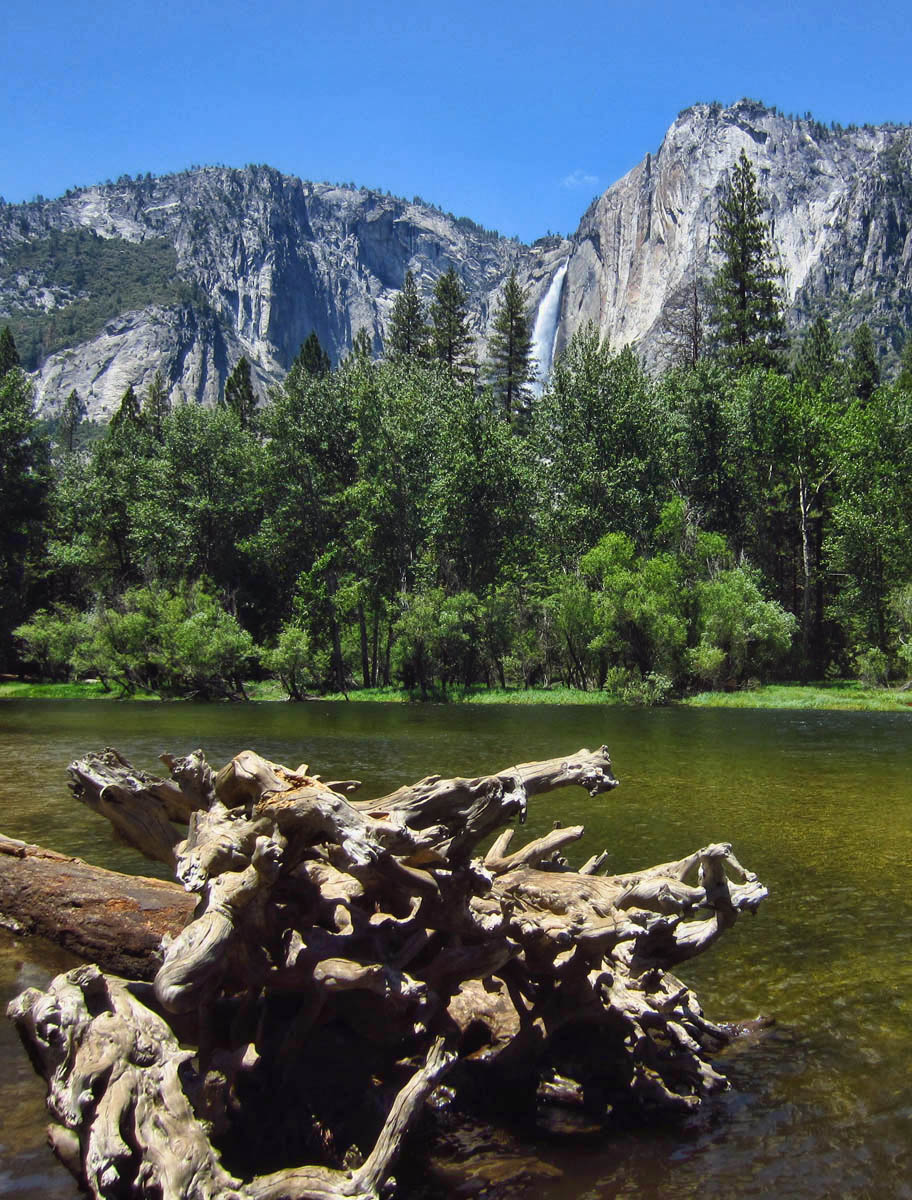 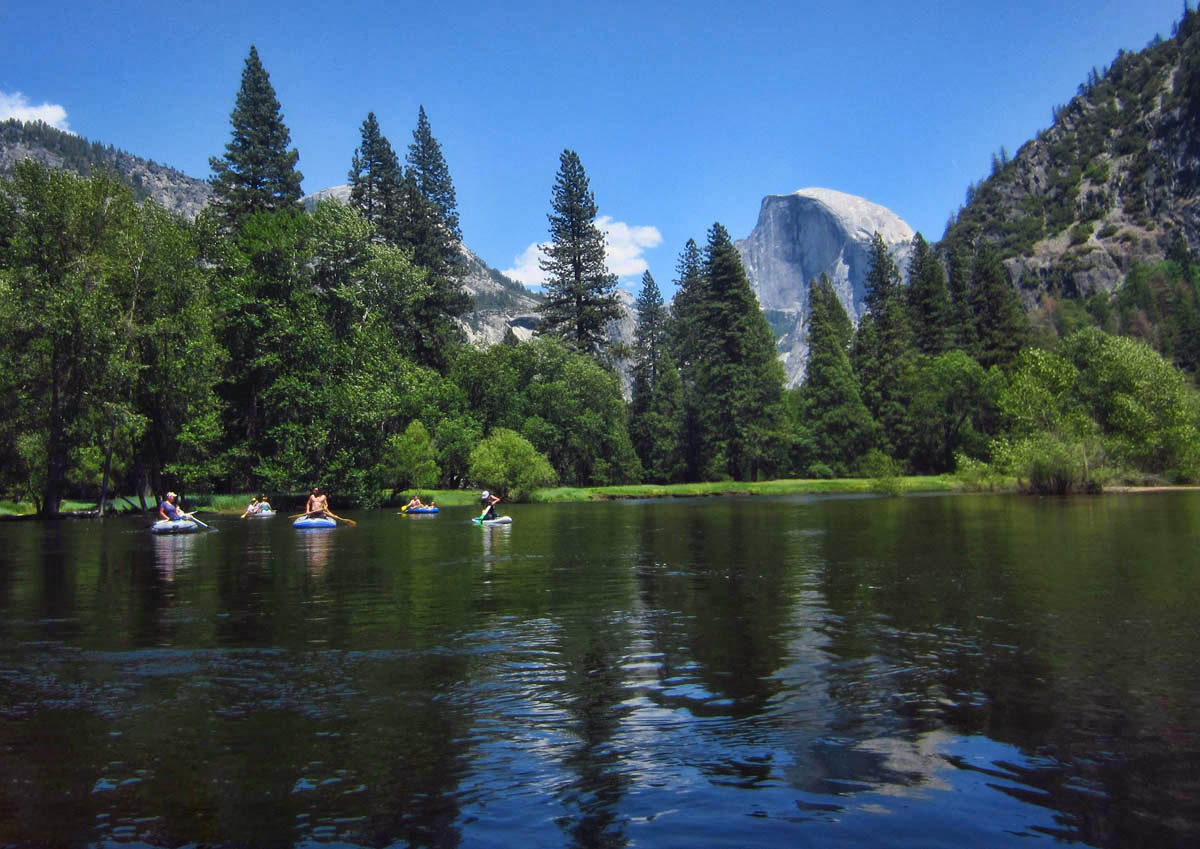 If you’ve ever hiked in Lake Havasu’s SARA Park, you are no doubt familiar with the Leaping Lizard Tribe. This group of rock climbers is responsible for the rock lizard sculpture in the park, as well as hauling the picnic table up to the top of the infamous hike by the same name. Each year, they make their annual pilgrimage to the climbers “Mecca,” Yosemite. Joel and Kathy’s son, Eagle Scout Jona, is learning to climb under their tutelage, ergo the annual week in Yosemite Valley. 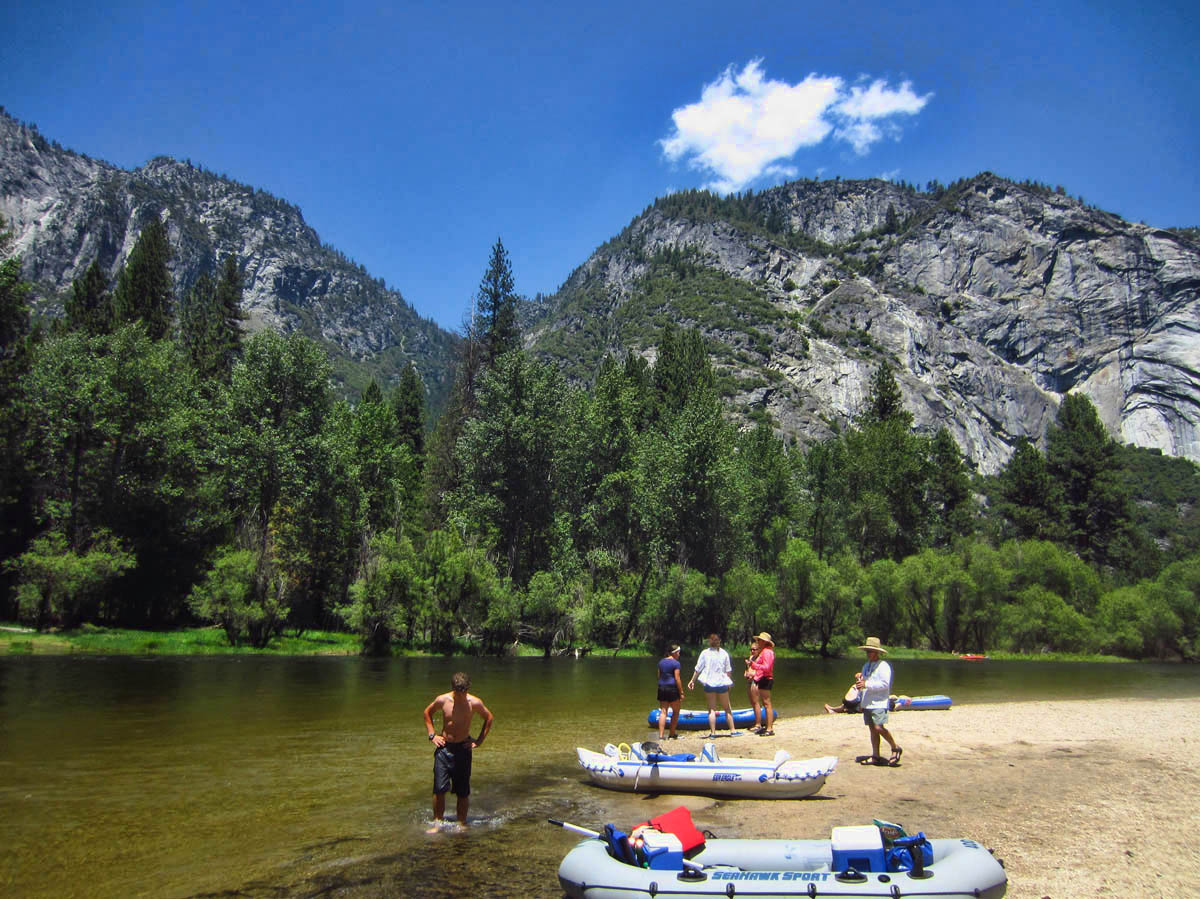 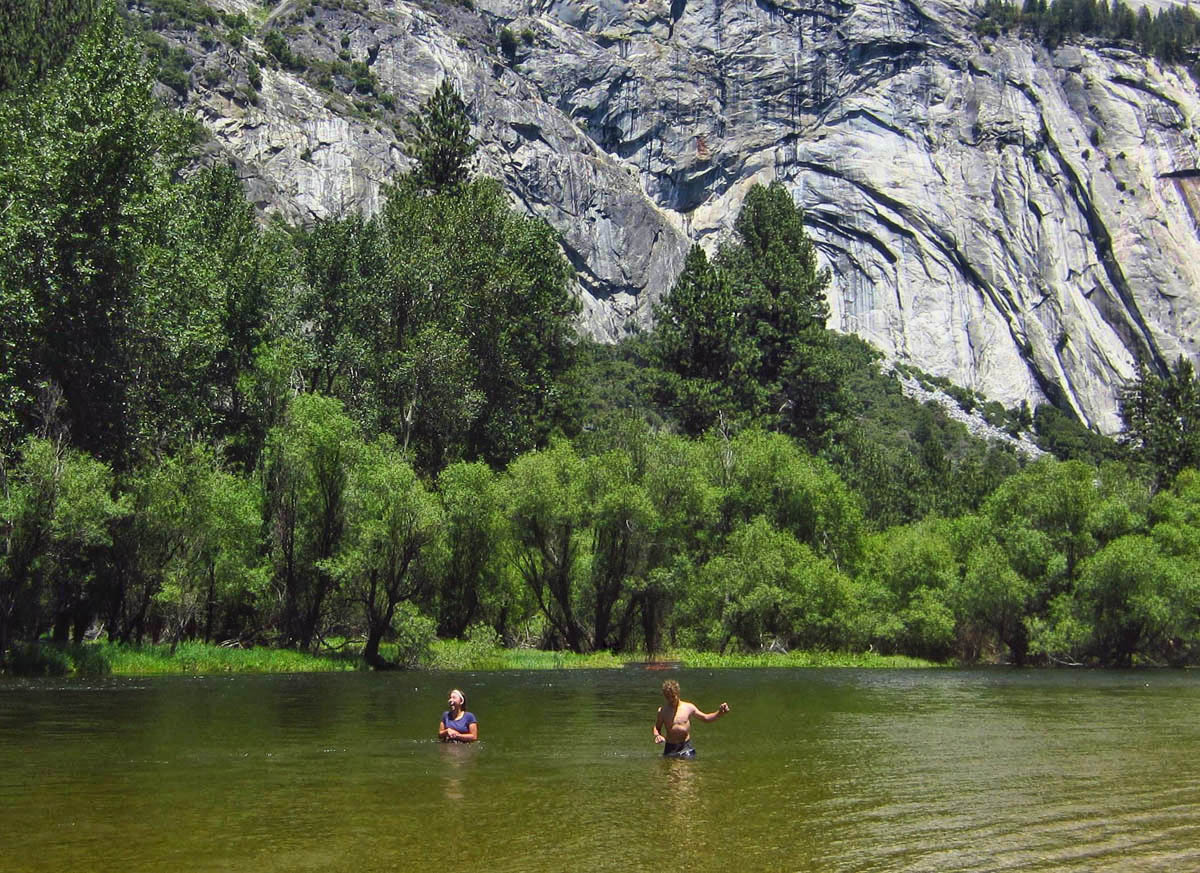 Joey and Jona brave the cold water for a swim.

Each year in February when inventory for the Pines Campgrounds in Yosemite loads, this group is ready with a “command station” to insure they secure enough sites for their group. Four different couples, some manning up to four monitors, are all poised to hit the “Book Now” button at exactly 8:00am. Inventory is typically gone within minutes. A week in Yosemite Valley equates to winning the National Park lotto!

Justin at Barber RV releases me back into the wild at 5:00pm on a Thursday, and I am an hour outside the gates of Yosemite by Friday night. There will be eleven of us to divide up between three sites; two RVs, the remainder in tents. But there’s a catch. It turns out one of the RV sites backs up to a creek, and the ground around is saturated. No place to pitch a tent in the entire site. Since Kathy’s kids are sleeping in tents and want to be near her, my RV is the only fit. I have the site all to myself….with a stream nipping at by back wheels. How could I have gotten so lucky to have a week of serenity in the heart of our busiest National Park campground? 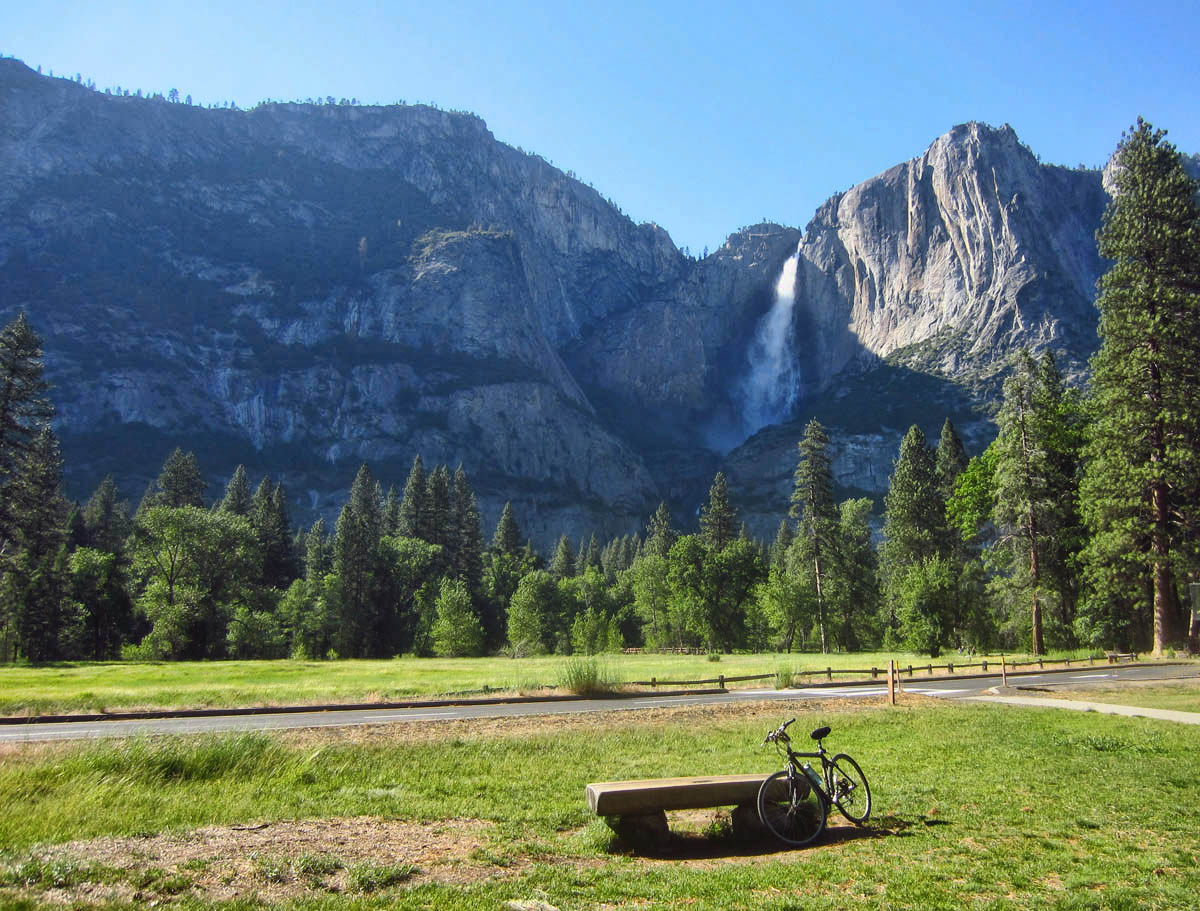 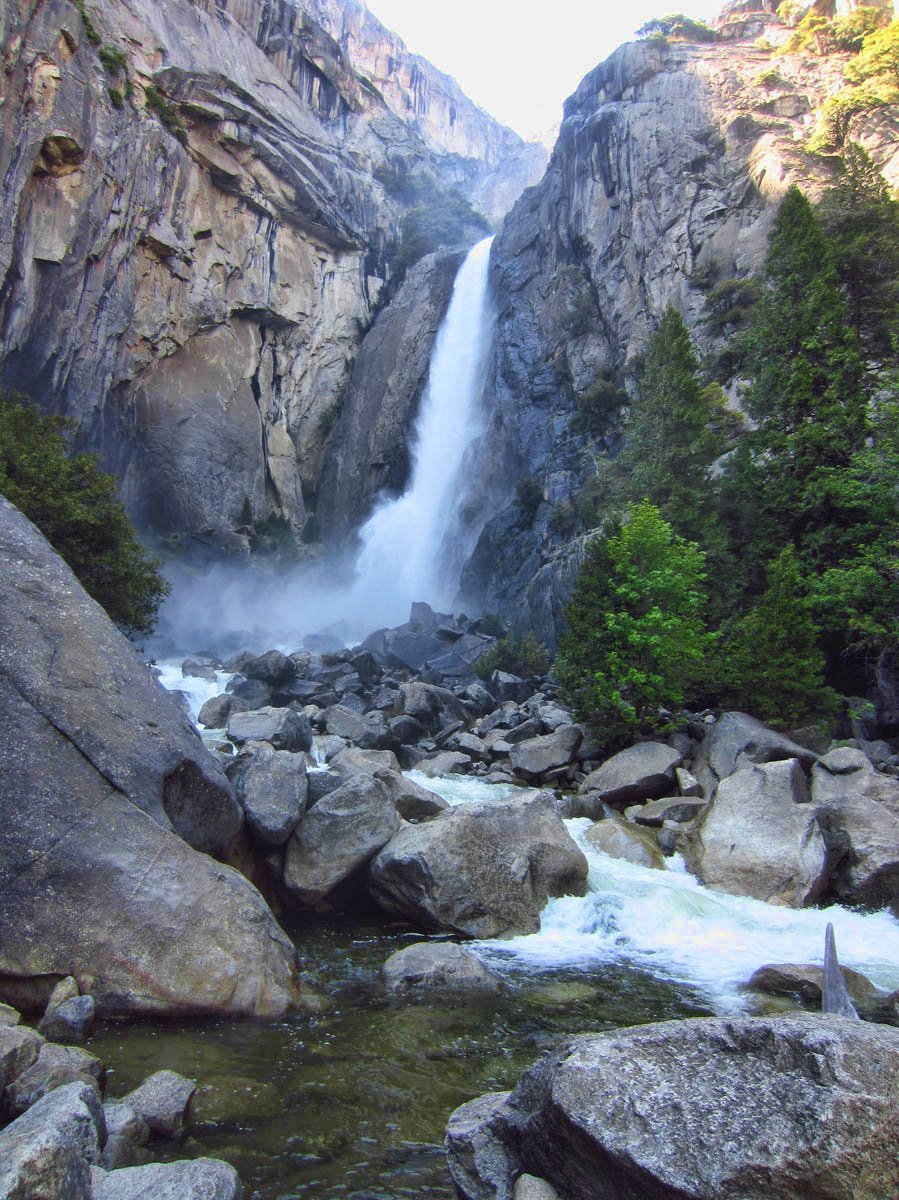 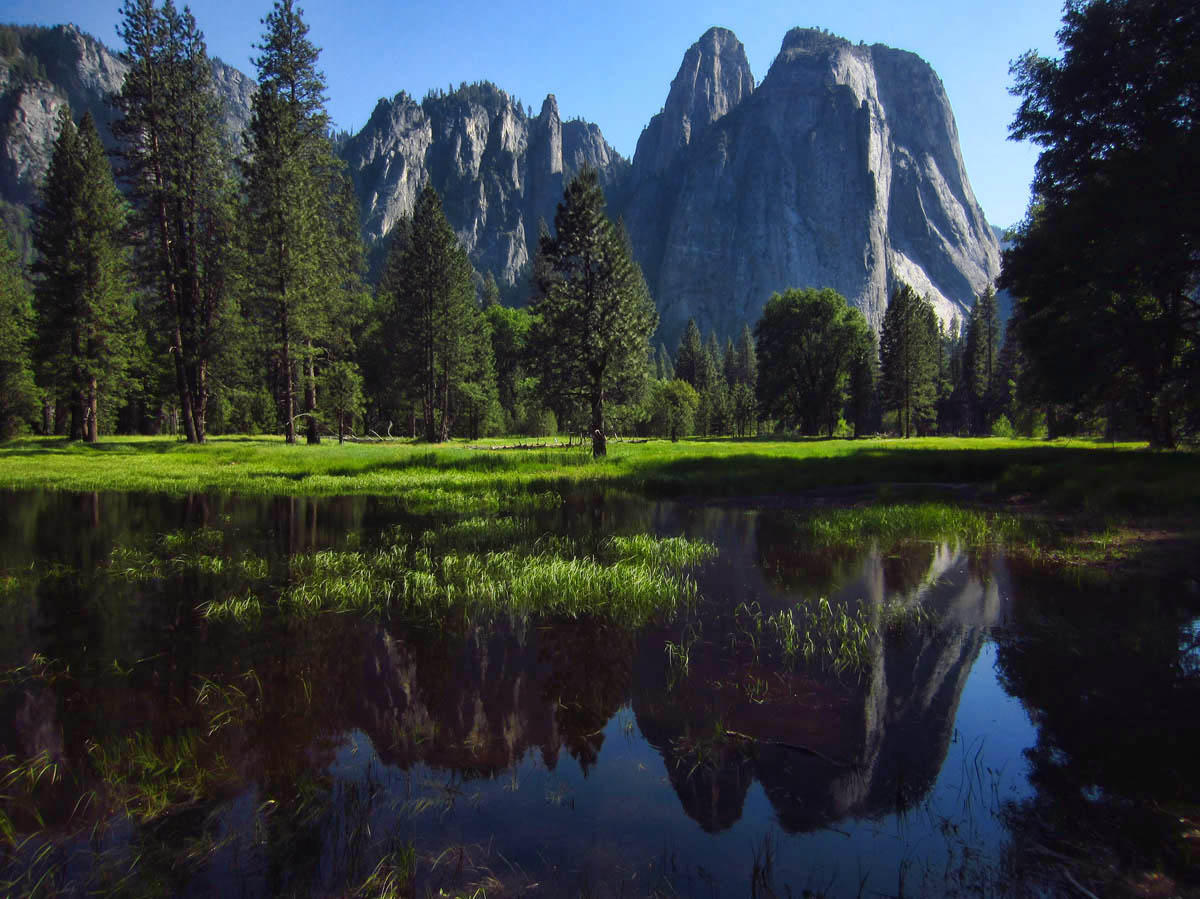 I also hit the lotto where meals are concerned. Kathy and Joel are both gourmet cooks, as evidenced by my last Thanksgiving feast at their home in Lake Havasu. In fact, Kathy is mentally scripting an online cookbook for outdoor adventures. I do my best to keep the drinks and appetizers flowing, but quickly realize my cold rotisserie chicken from Walmart is no match for her menu items like Shrimp Scampi or homemade meatballs. So when she graciously insists, I gratefully acquiesce. 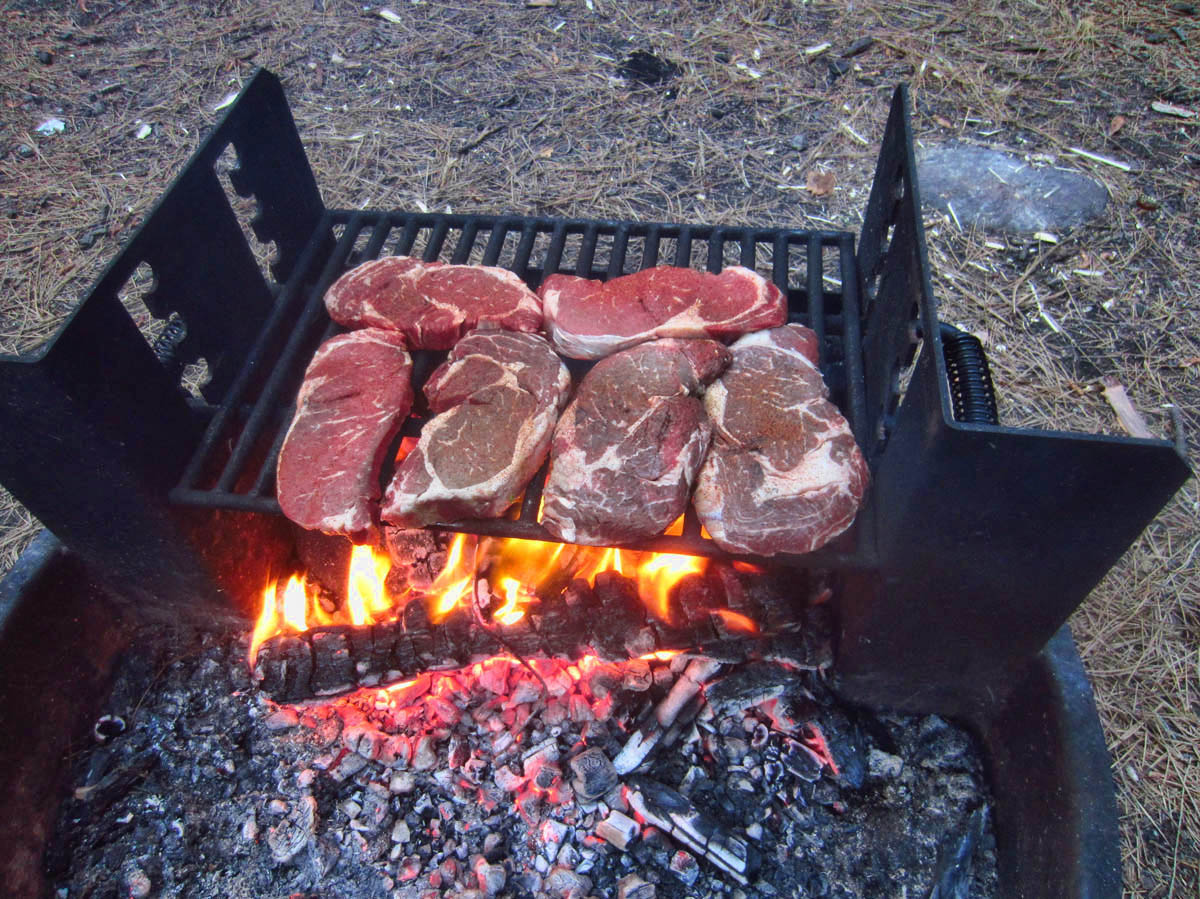 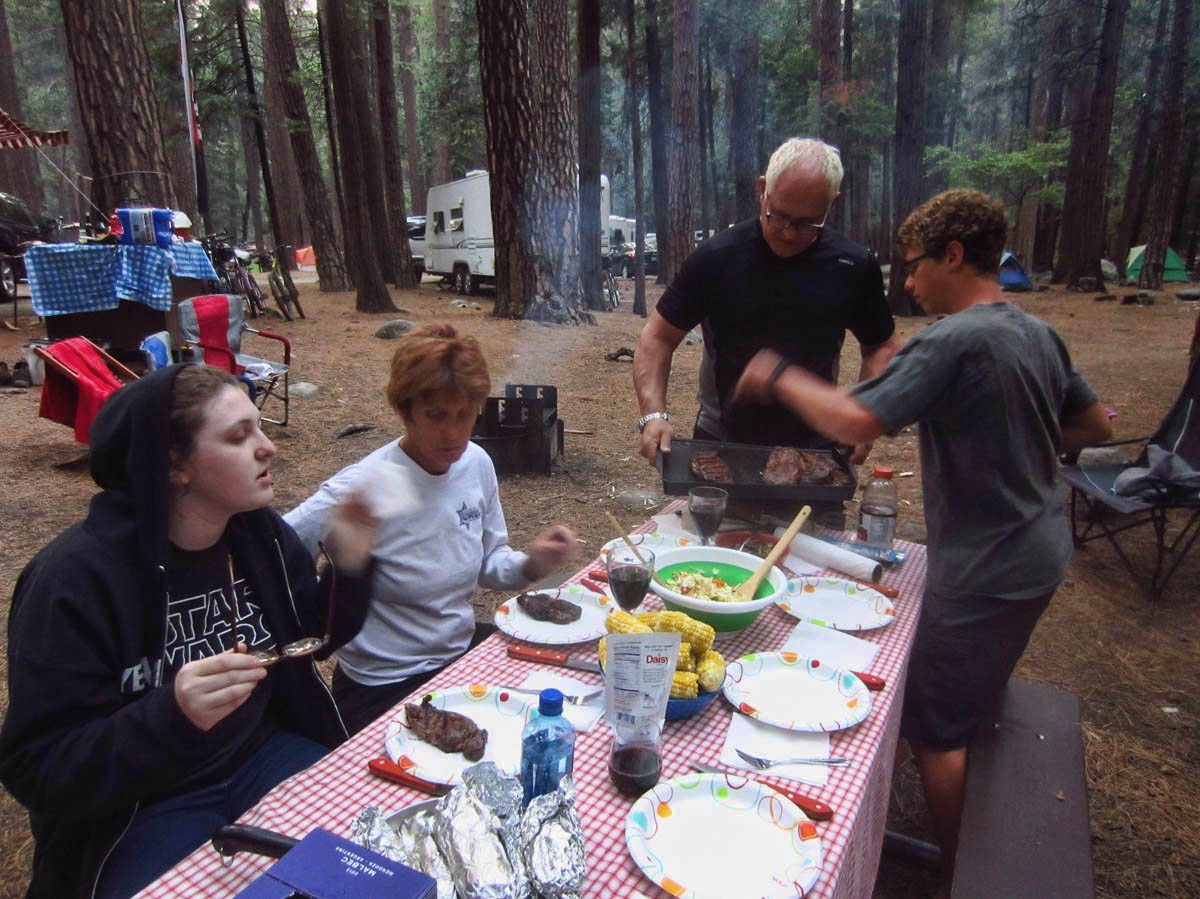 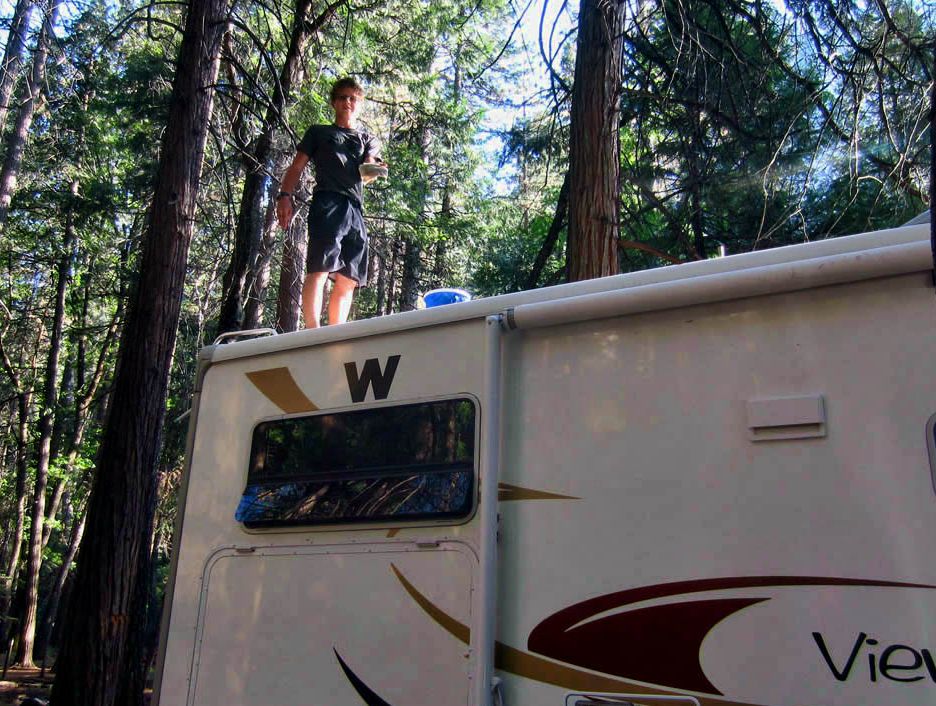 I also hit the lotto with climber Jona agreeing to wash my solar panels.

I admit to having my doubts about spending a week in Yosemite Valley in the summertime. But the massive towering granite walls and thick evergreen forests seem to swallow up the crowds. Between biking, hiking, and rafting the Merced River, there is so much fun to be had. And Kathy and Joel’s family along with the Lake Havasu Lizard Tribe truly make me feel like family. And when one is immersed amidst a few thousand families, there’s no better place to be than with one of your own. 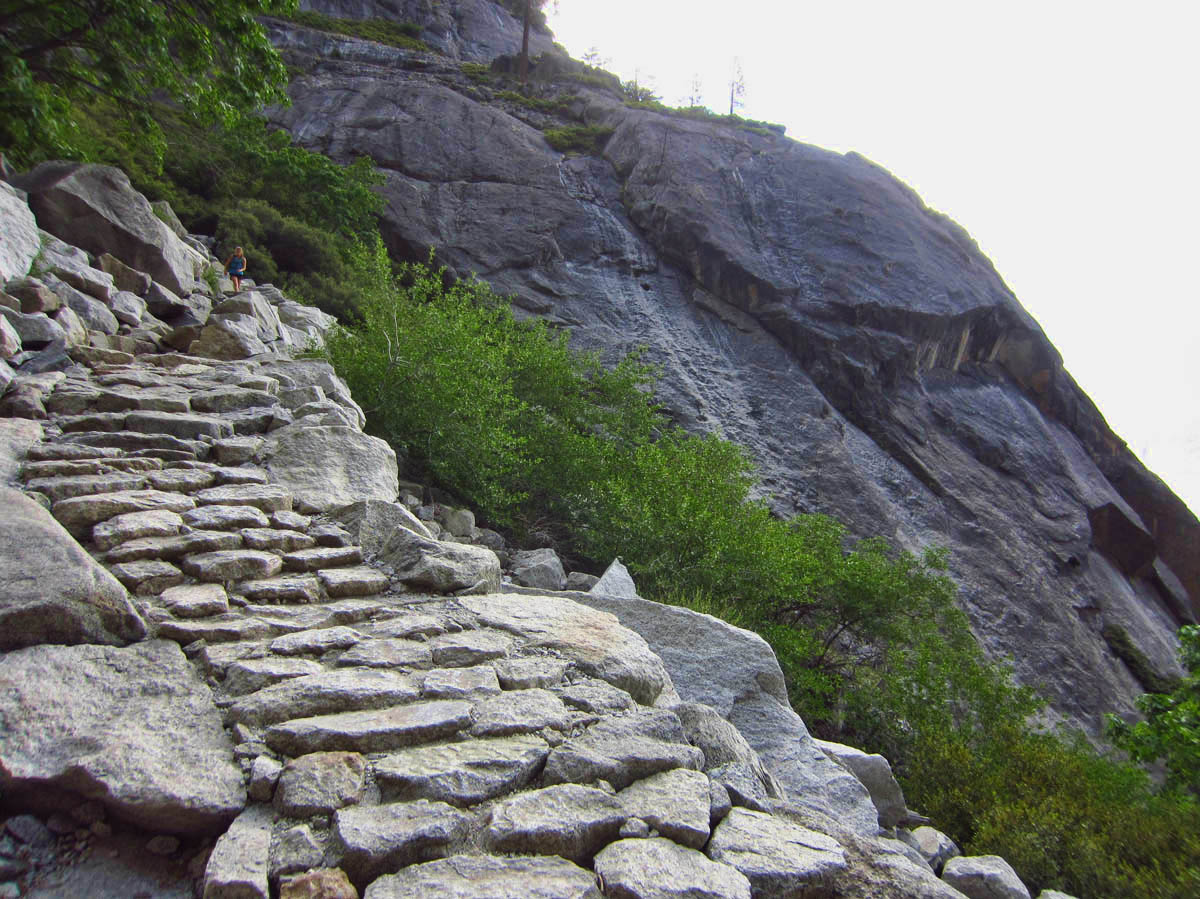 Upper Yosemite Trail is one of the oldest in the park. These steps were begun by John Conway in 1873. 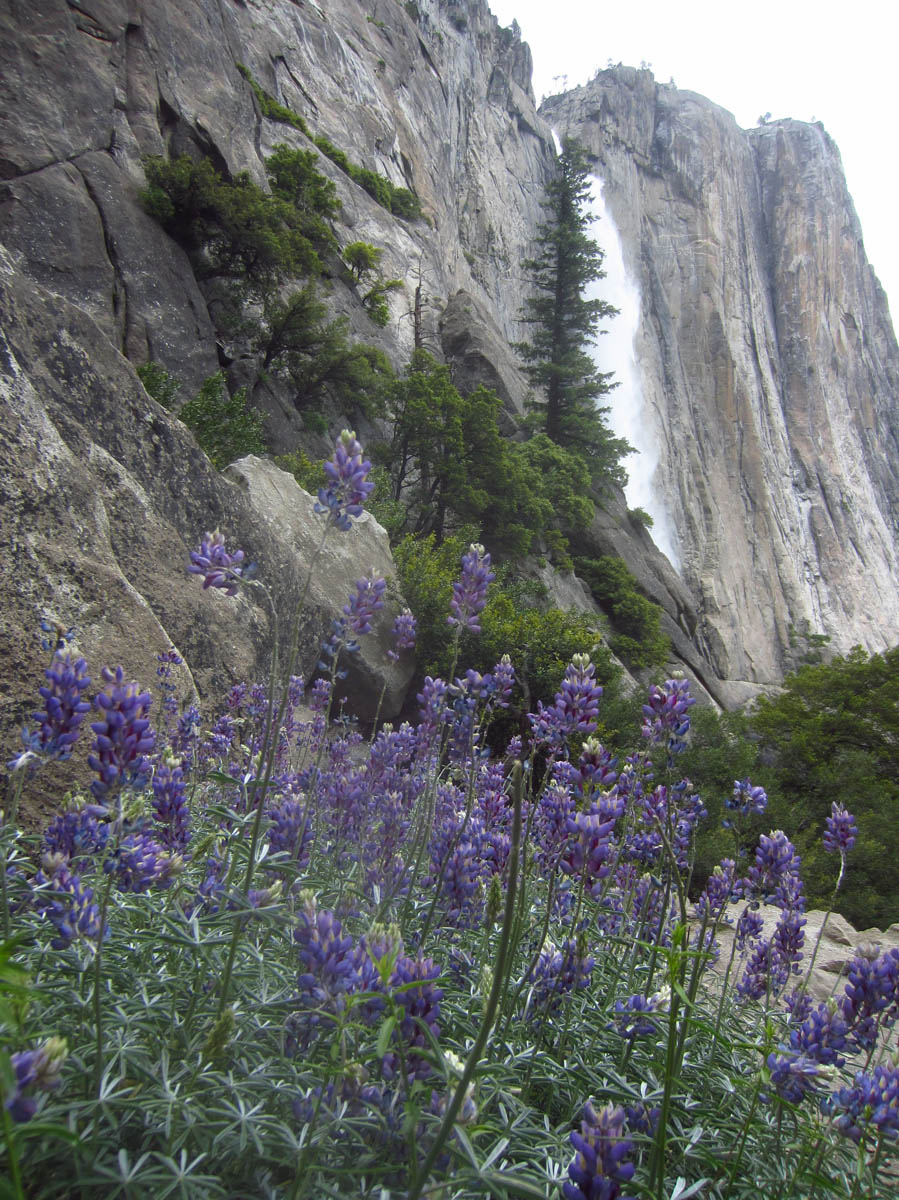 Upper Yosemite Falls is one of the most popular hikes in the park. 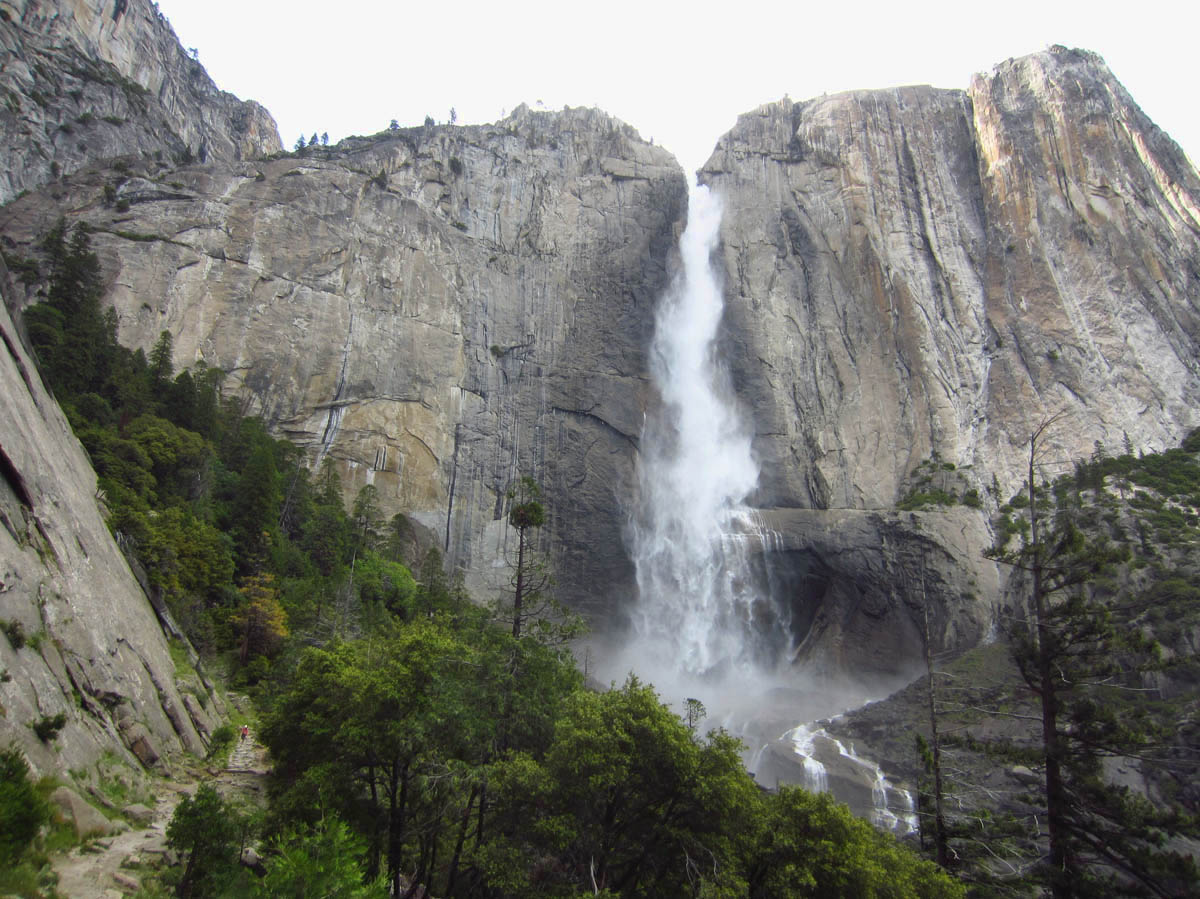 The hike up to the top of the falls is 3.6 miles, but I am going beyond to Yosemite Point, the tallest point on the right, which is 4.5 miles OW. 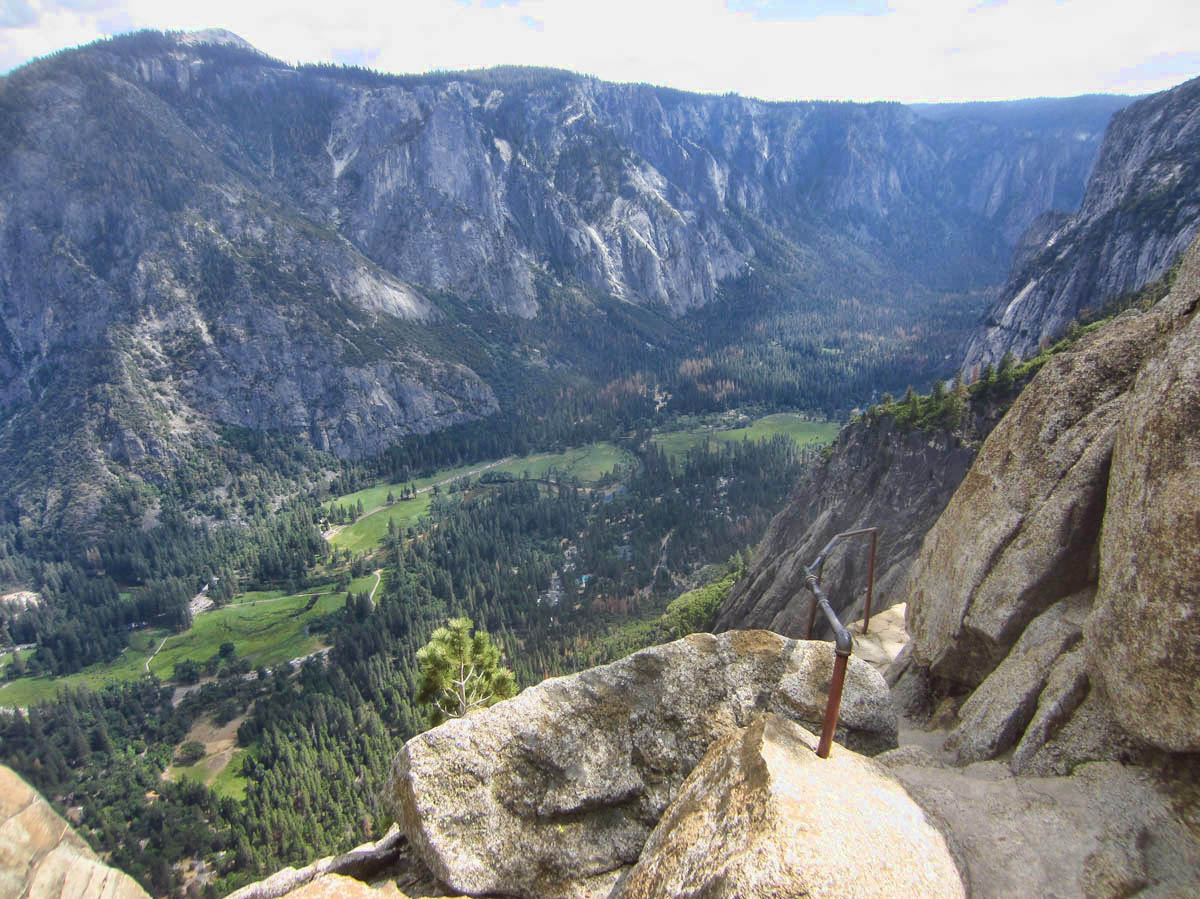 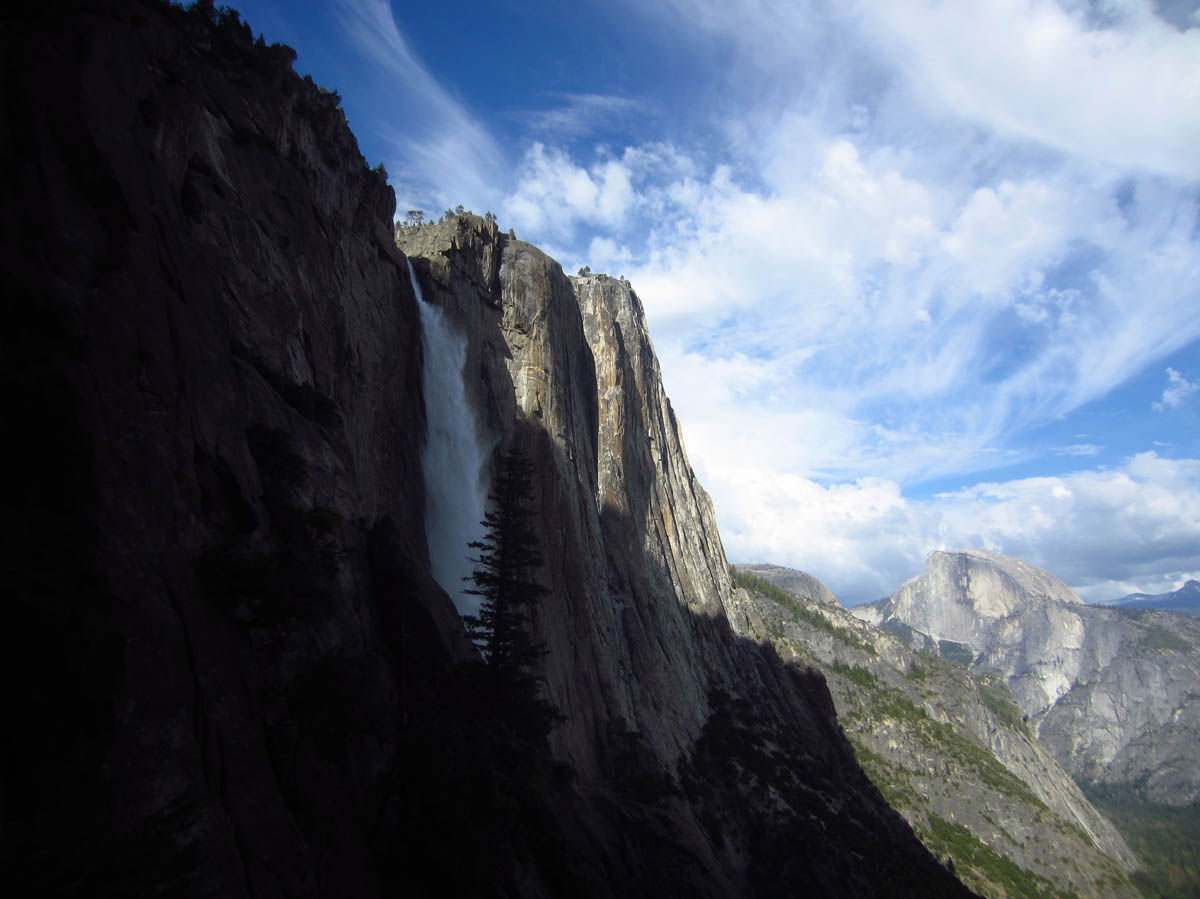 Yosemite Falls is reported to be the tallest waterfall in North America. 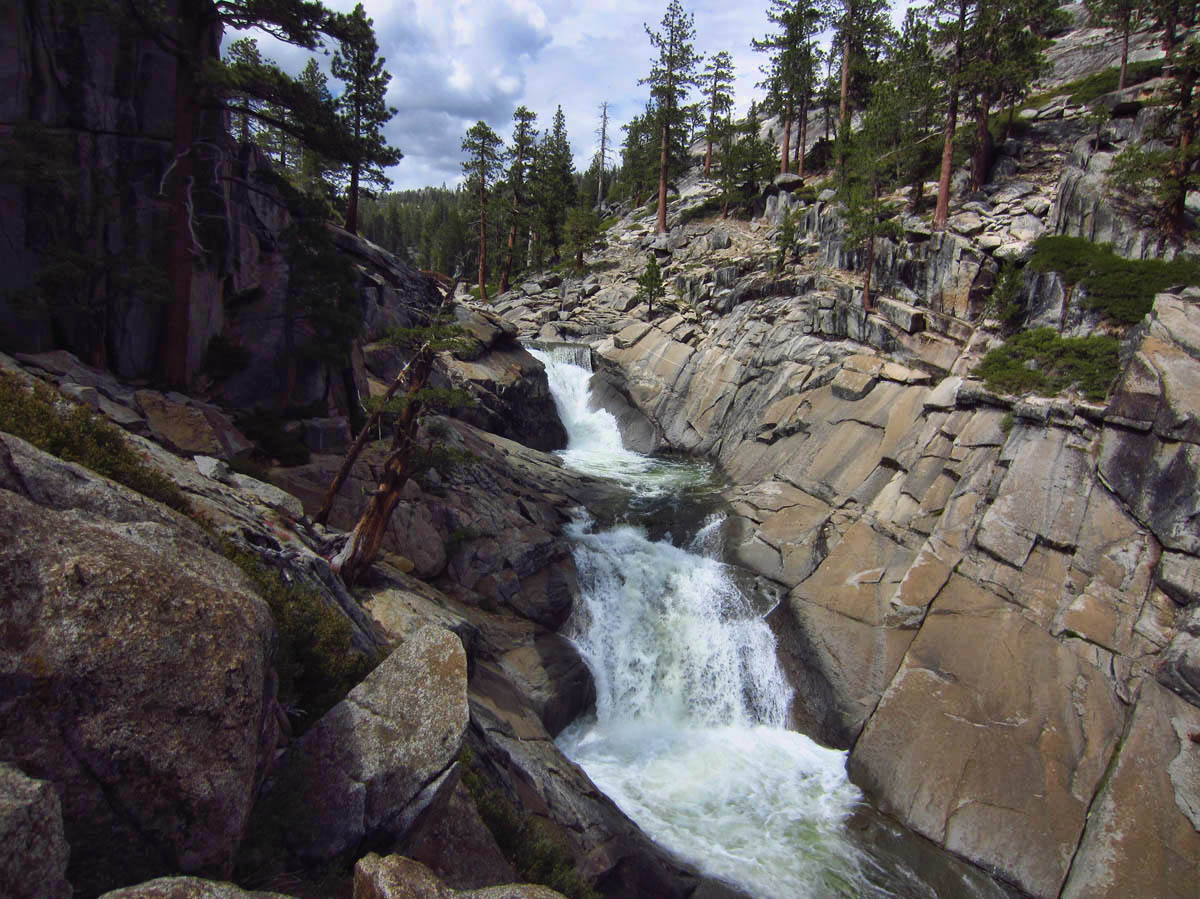 Top of the river, right before it plunges over the falls. 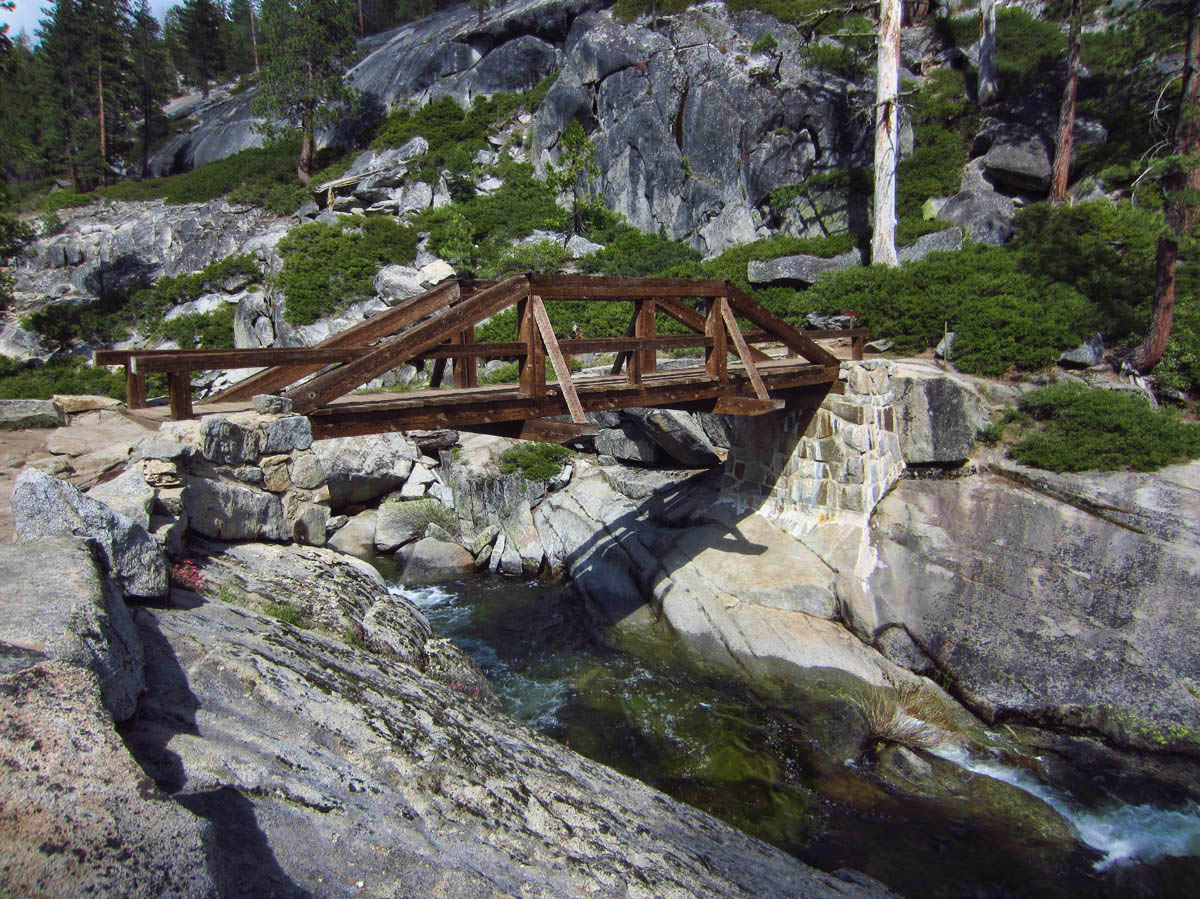 Bridge crosses Yosemite Creek, which plunges over into Yosemite Falls 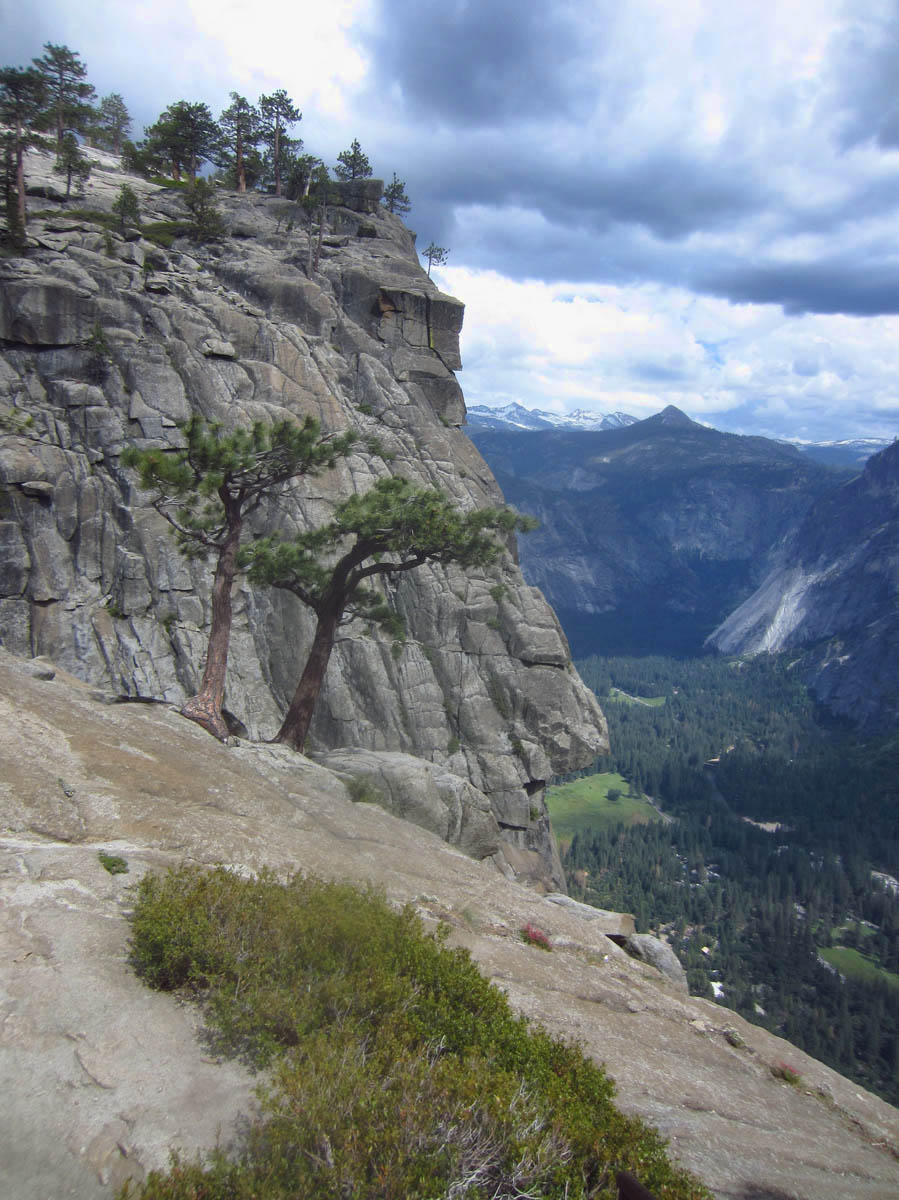 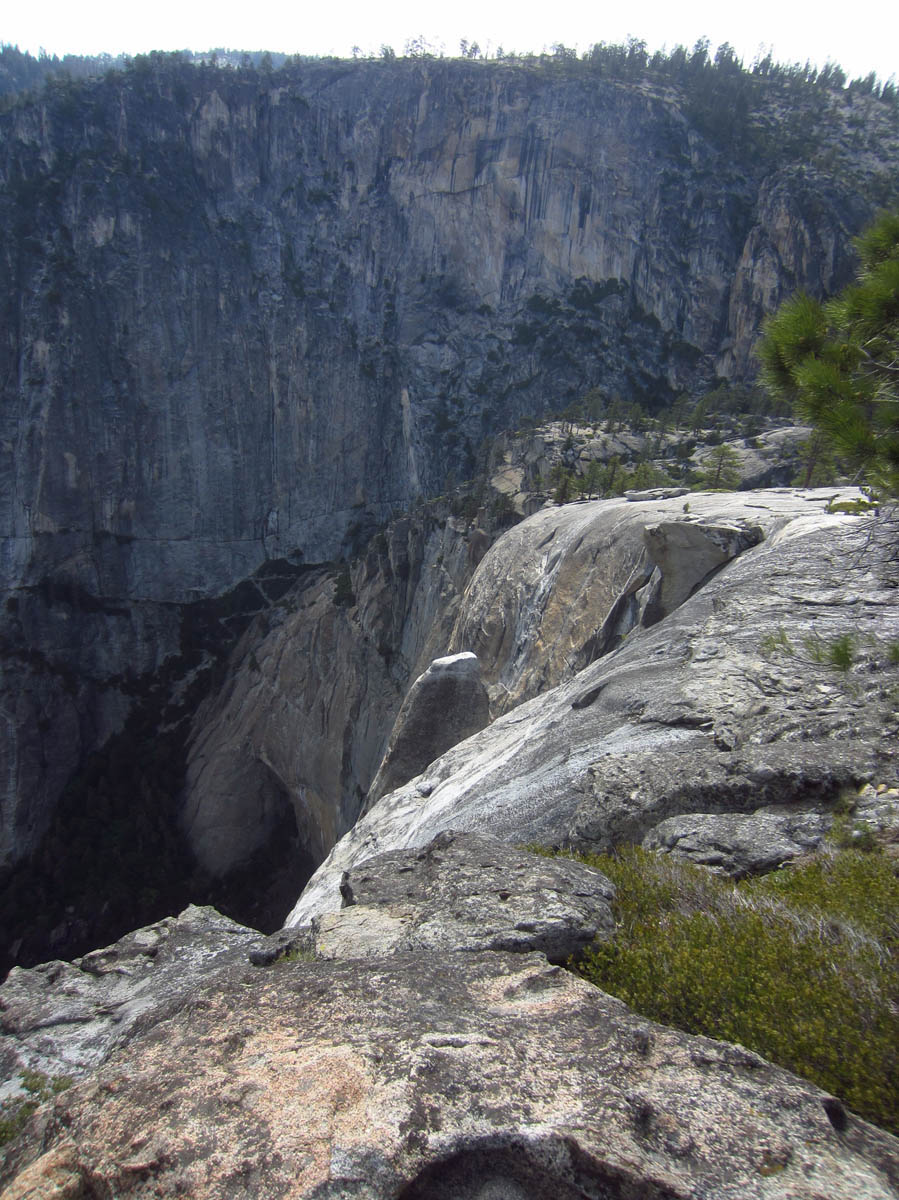 The white spire sticking up in the center of the photo is Lost Arrow, a detached pillar of granite rock. The zig-zags in the distant green section are the switchbacks of the trail. 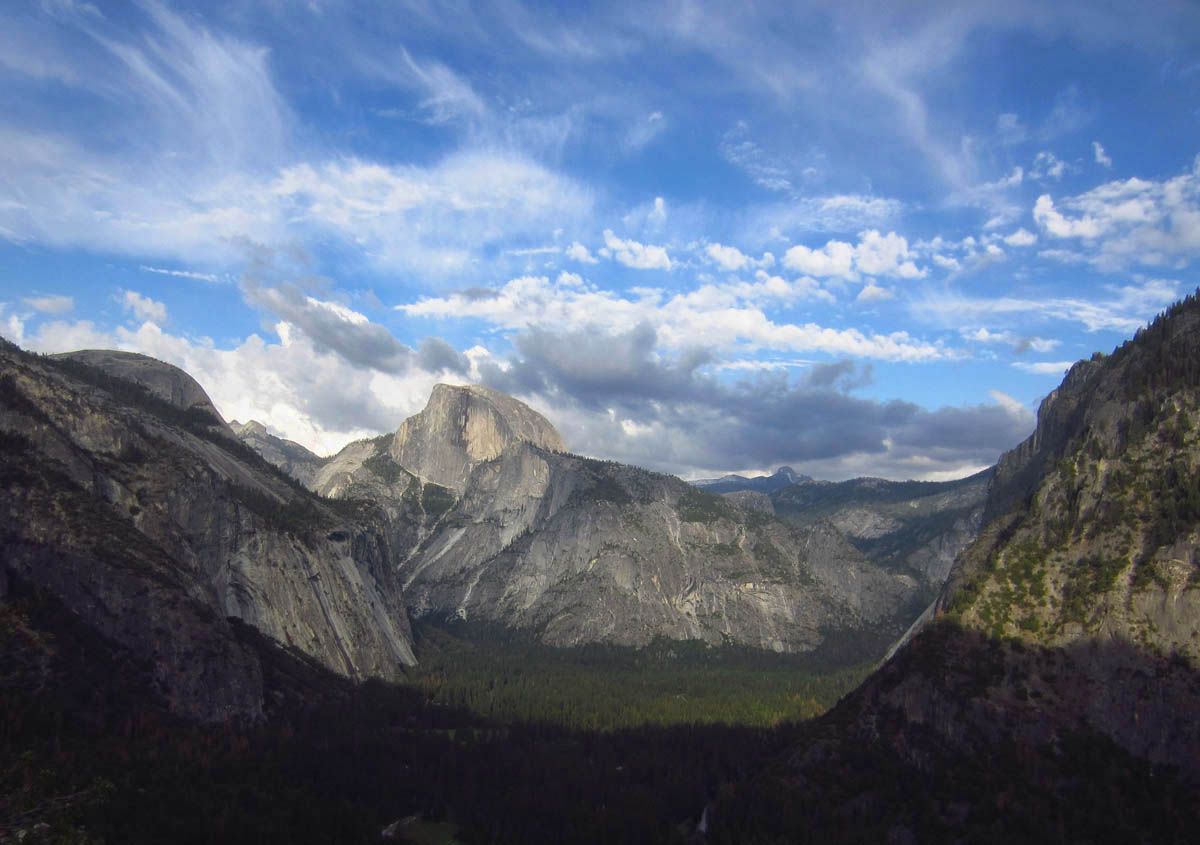 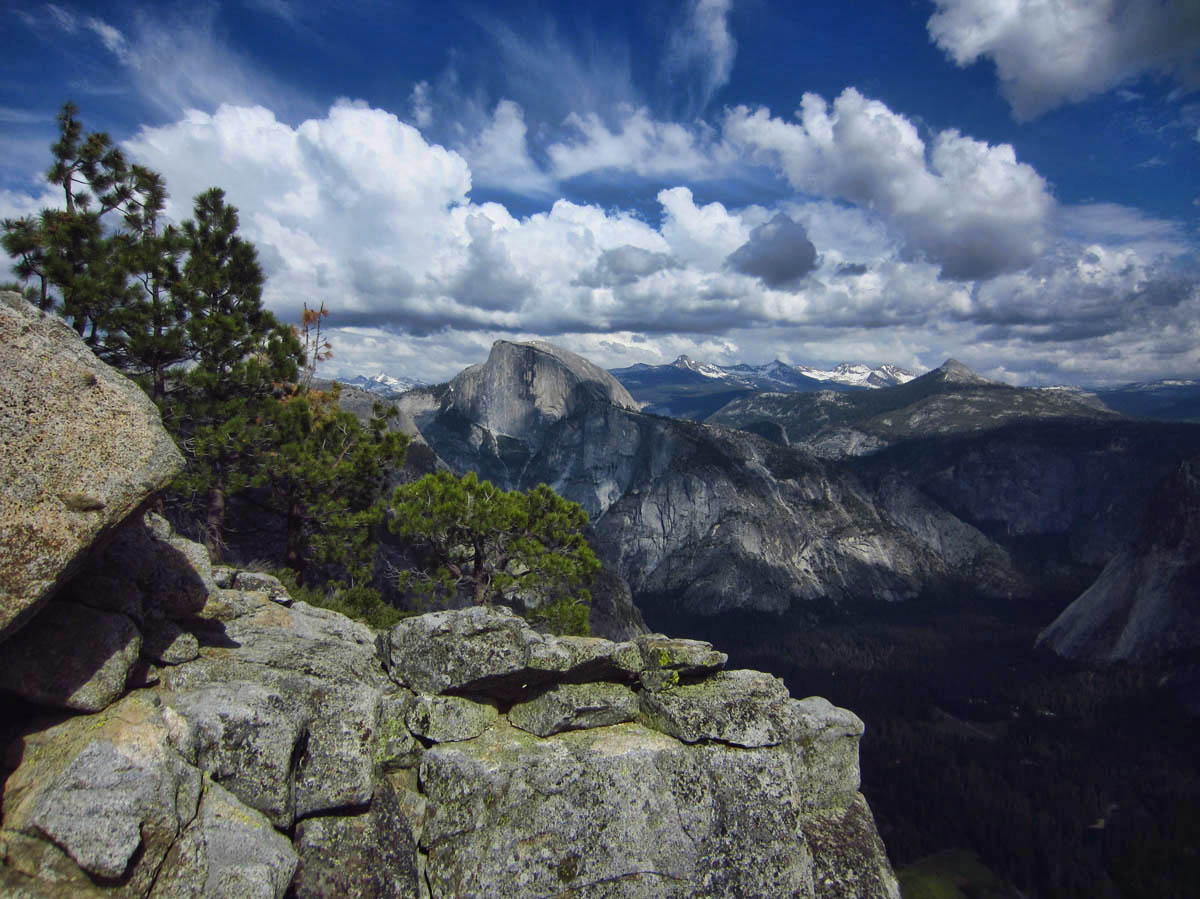 Views of Half Dome and the valley are spectacular from Yosemite Point.

19 thoughts on “Winning the Yosemite Lotto”