Yosemite National Park sees four million visitors each year. It ranks in the upper half of our Top 10 most visited national parks. “No temple made with human hands can compete with Yosemite,” wrote John Muir, early conservationist who influenced the creation of many of California’s parks.

As I mentioned in the previous post, coveted campsites within Yosemite Valley sell out four months ahead within minutes of inventory being opened up. With the exception of Camp 4, a tent-only campground, there are no first come first serve campgrounds within the valley, leaving the only other option to monitor recreation.gov regularly in hopes of grabbing a cancellation. 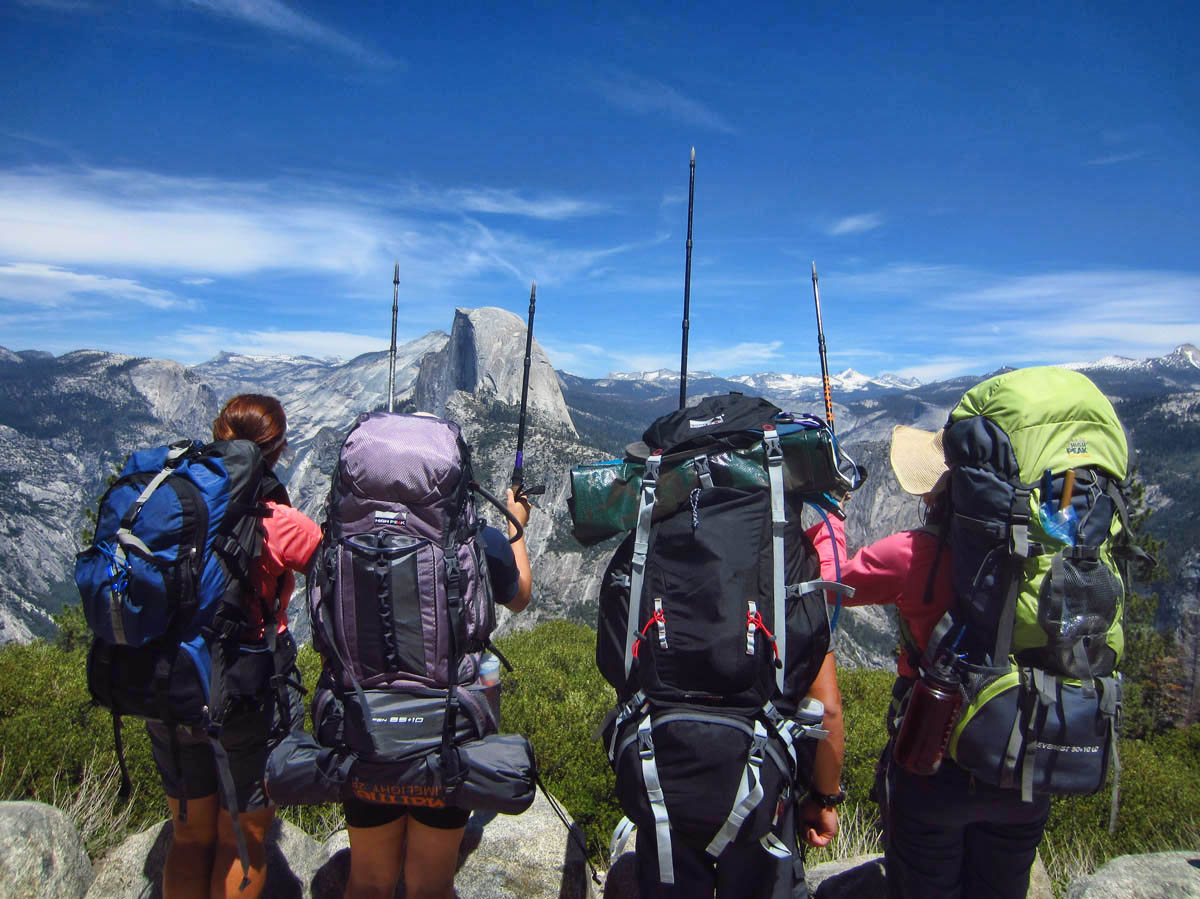 From Glacier Point, “Half Dome or Bust!” 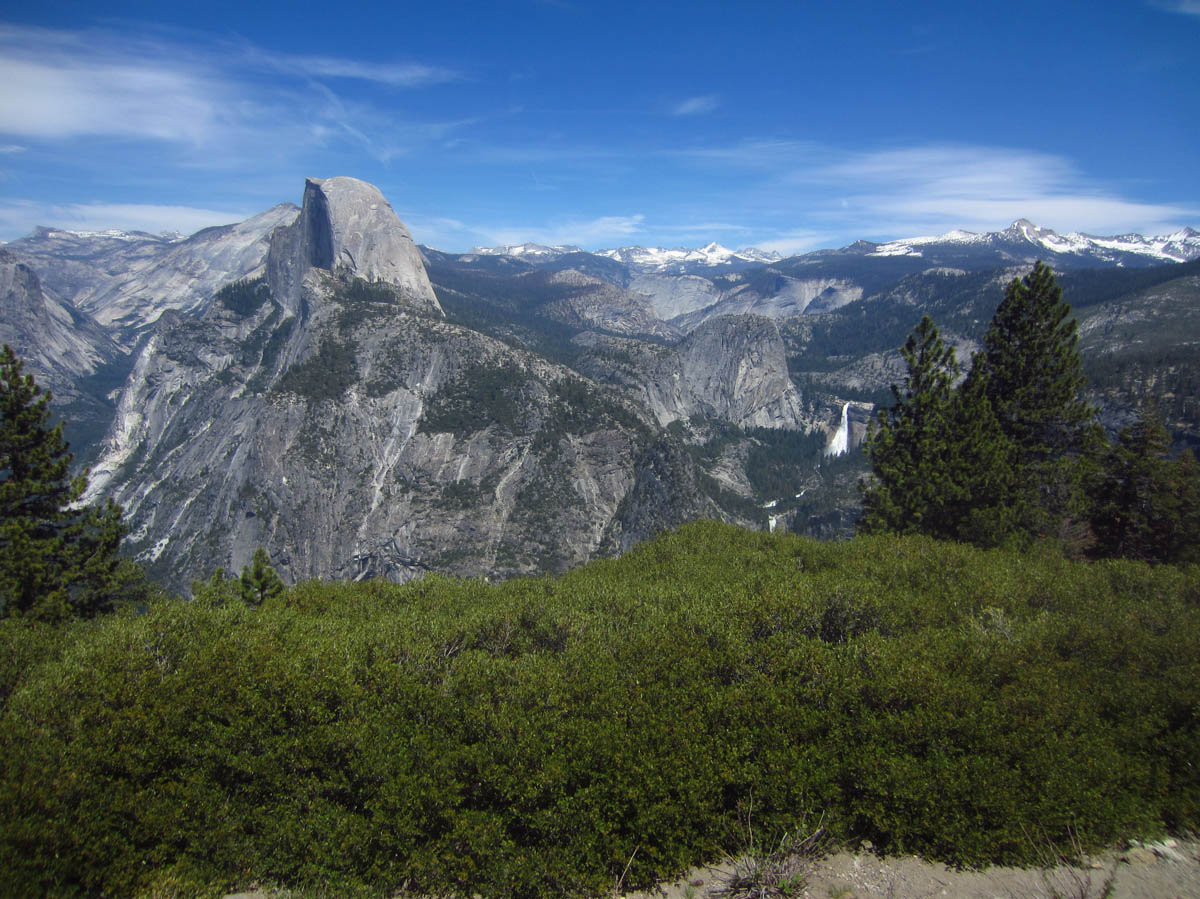 I love watching the perspective of the granite monolith change as we wander along the Panorama Trail. 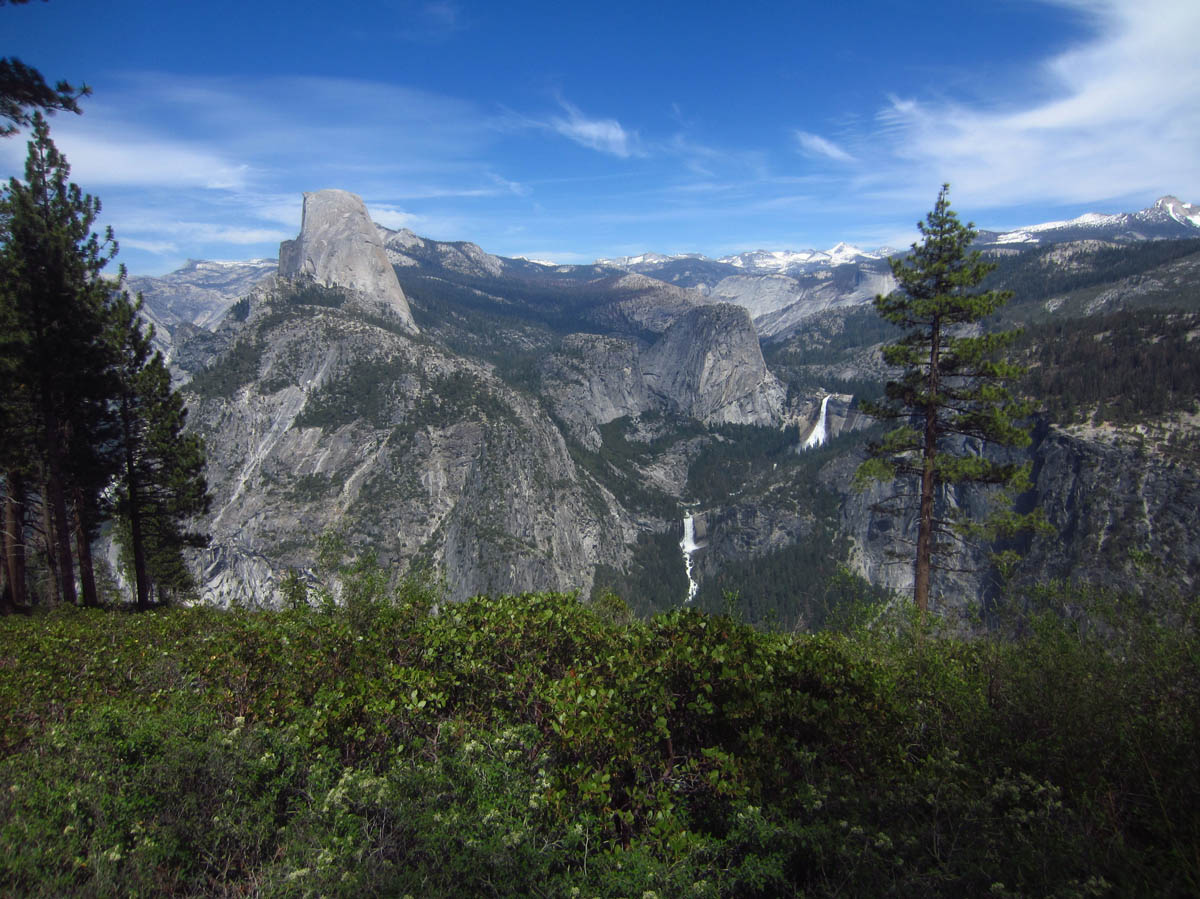 This prompts some to ask, “Why can’t they open up more sites?” There is talk that some of the riverside campsites, previously closed due to flooding, could be reopened.  Truly the park needs more accommodations. But already, the roads in the Valley are gridlocked. Weekends, two lane roads are squeezed down to one to allow an open lane for shuttle buses and emergency evacuation. The infrastructure is taxed beyond boundaries. So the challenge lies in how to allow as many visitors as possible to enjoy the recreational areas their very tax dollars go to support. The answer, at least in Yosemite’s case, equates to reservations that resemble a roulette wheel and impossible to procure permits. 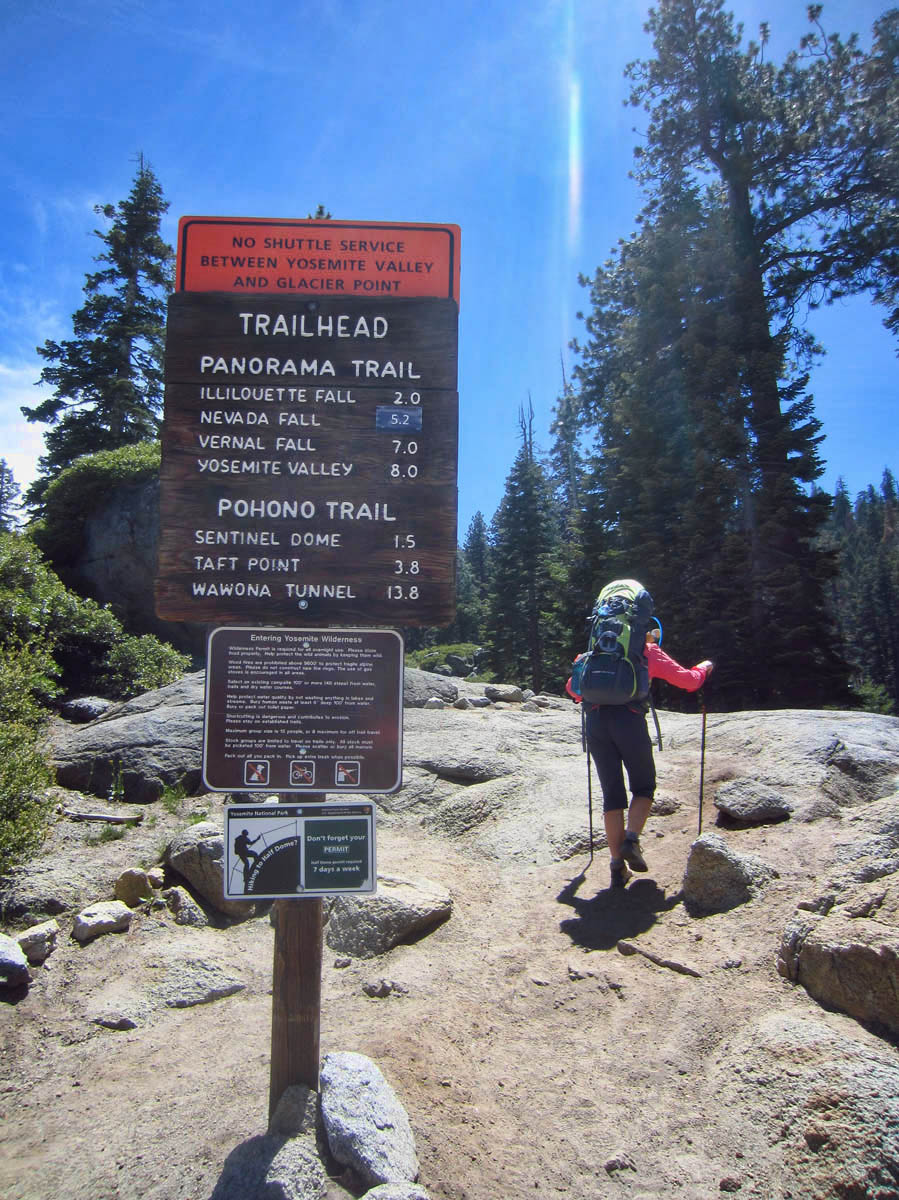 Thankfully, the trail head sign reminds us not to forget the prized permit! 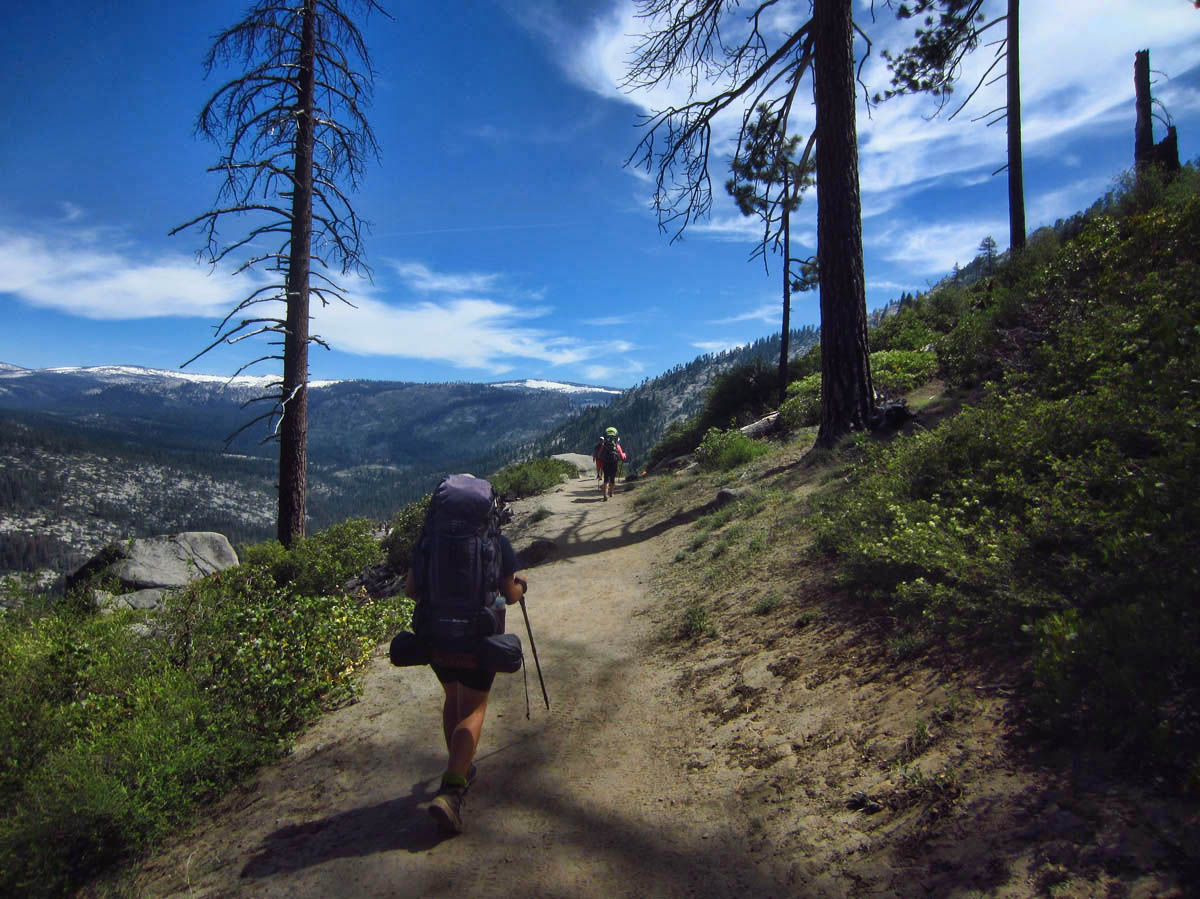 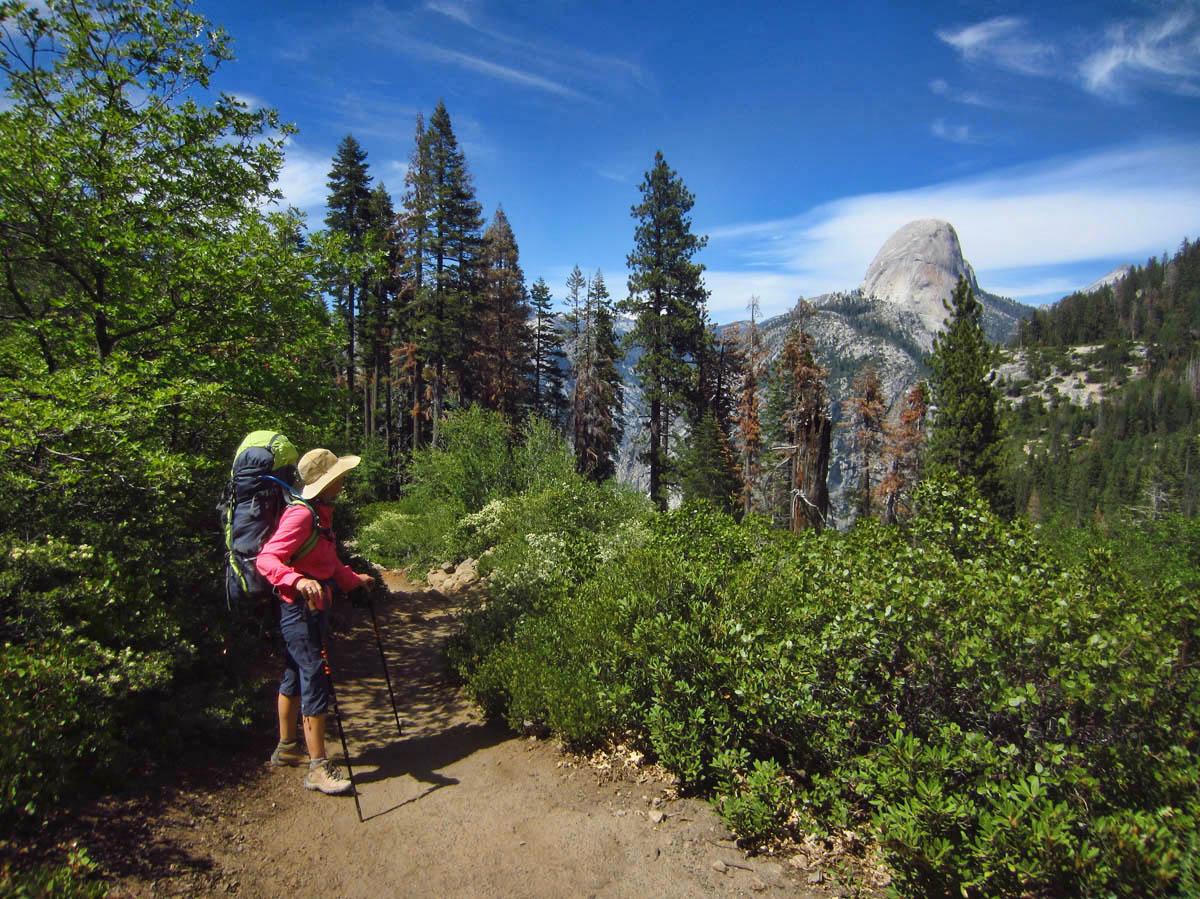 Working our way around the backside of Half Dome.

When I meet up with my camping companions, one of the first topics around the campfire is the desire to hike to Half Dome. Kathy, her son Jona, their “adopted daughter” Joey, and I all four want to make the hike, but none of us has obtained the highly sought after permit required to travel beyond the sub-dome. This permit system is the bane of the hiker’s existence. 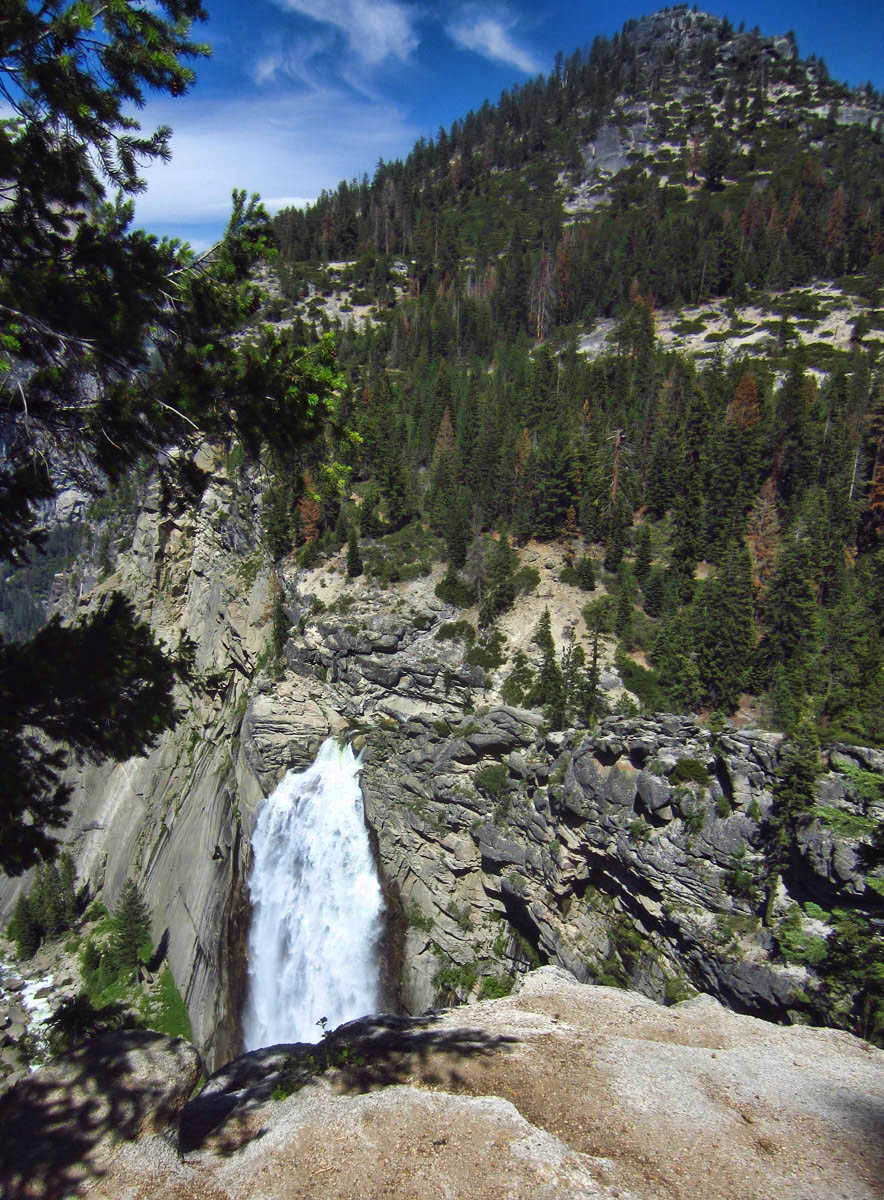 The rarely seen Illilouette Falls from the Panorama Trail. 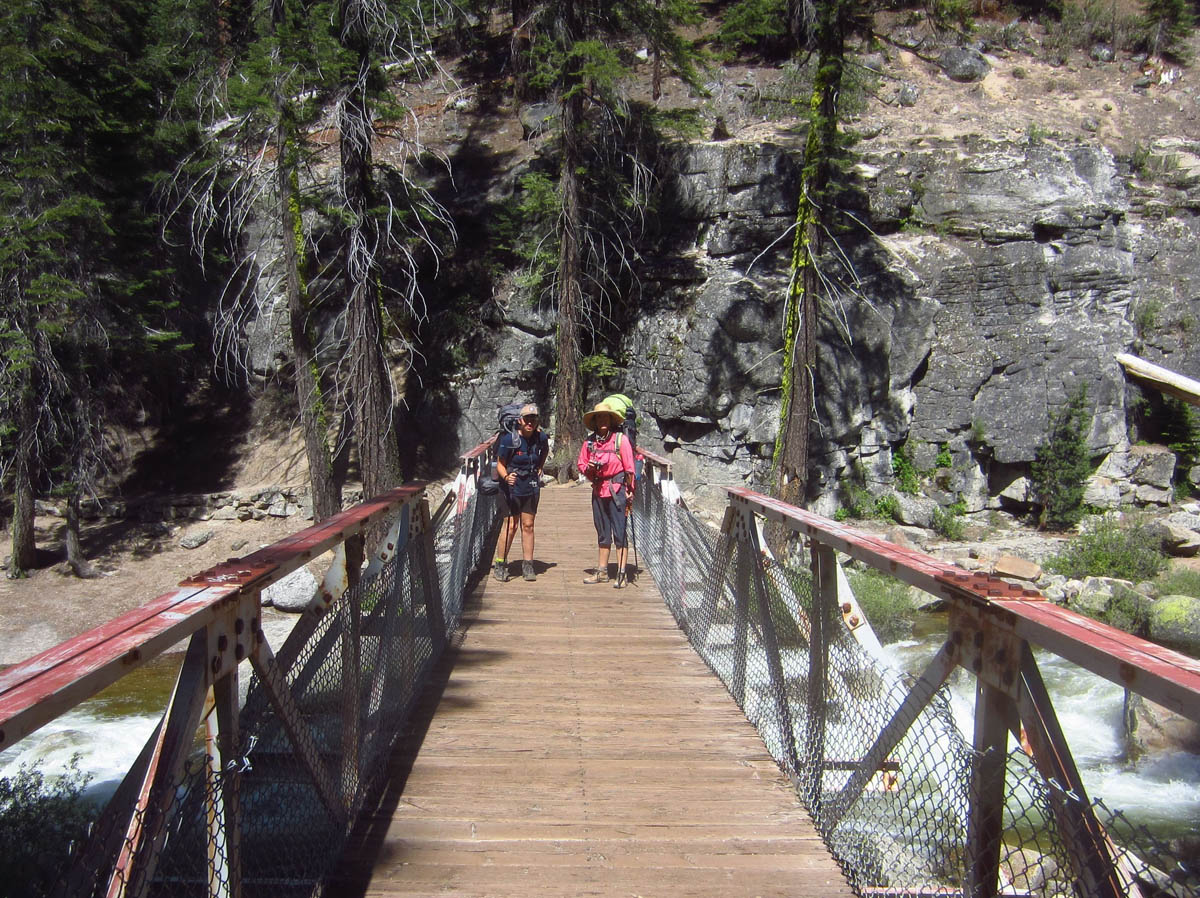 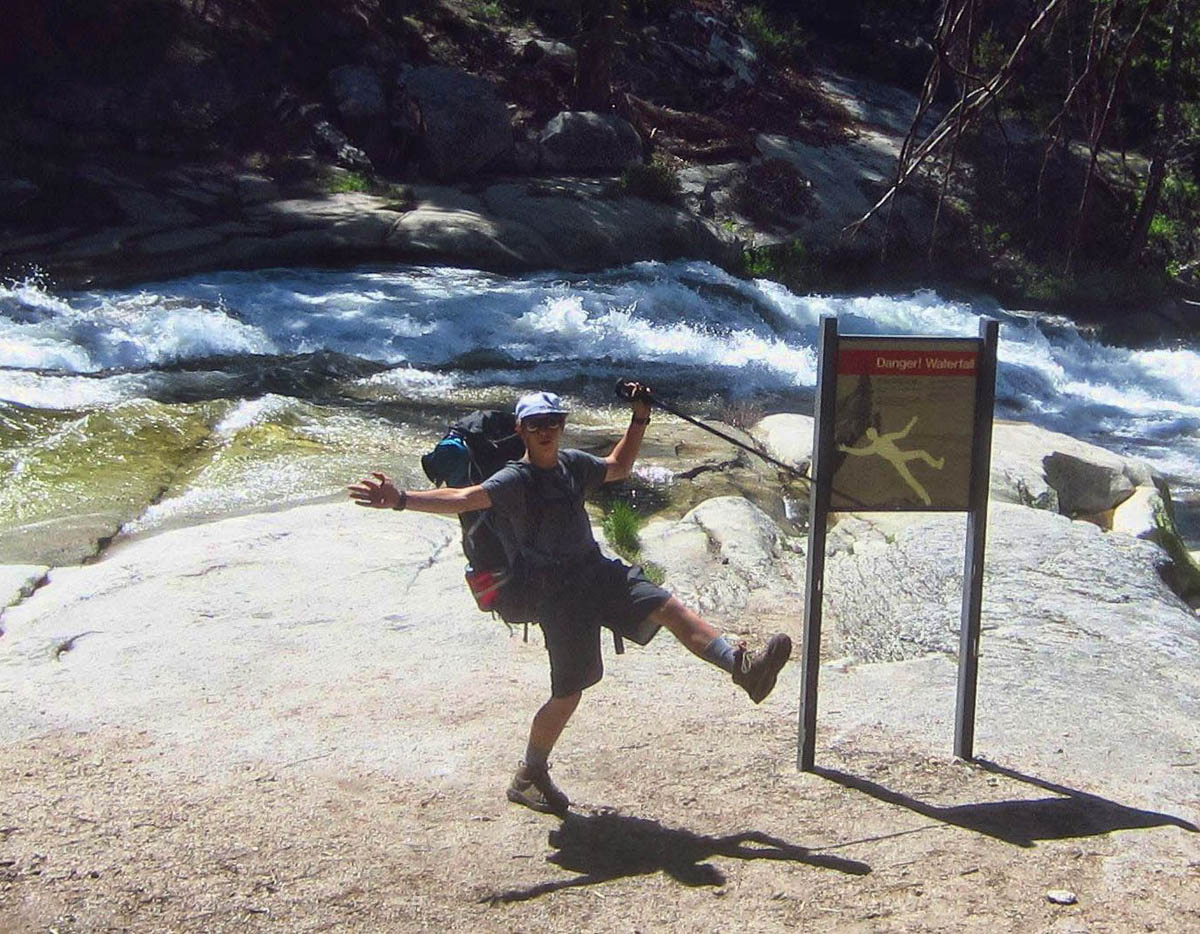 Jona’s got that “Danger! Waterfall” pose down.

Each year, the NPS gives out 300 daily permits in advance to hike Half Dome. Of those, 225 are awarded to day hikers with the remaining 75 reserved for backcountry campers.  In addition, a few permits are allotted via last minute lottery based on cancellations in what is an impossible Catch 22 scenario. One must submit the form online and be notified the next day by email, but there is no cell service within the valley. This means a trip into the local valley pizza restaurant to use their wifi to submit the form one day, then return to see if you are one of the lucky recipients the following day. Being a slave to the online permit system could consume a weeks vacation in a hurry. 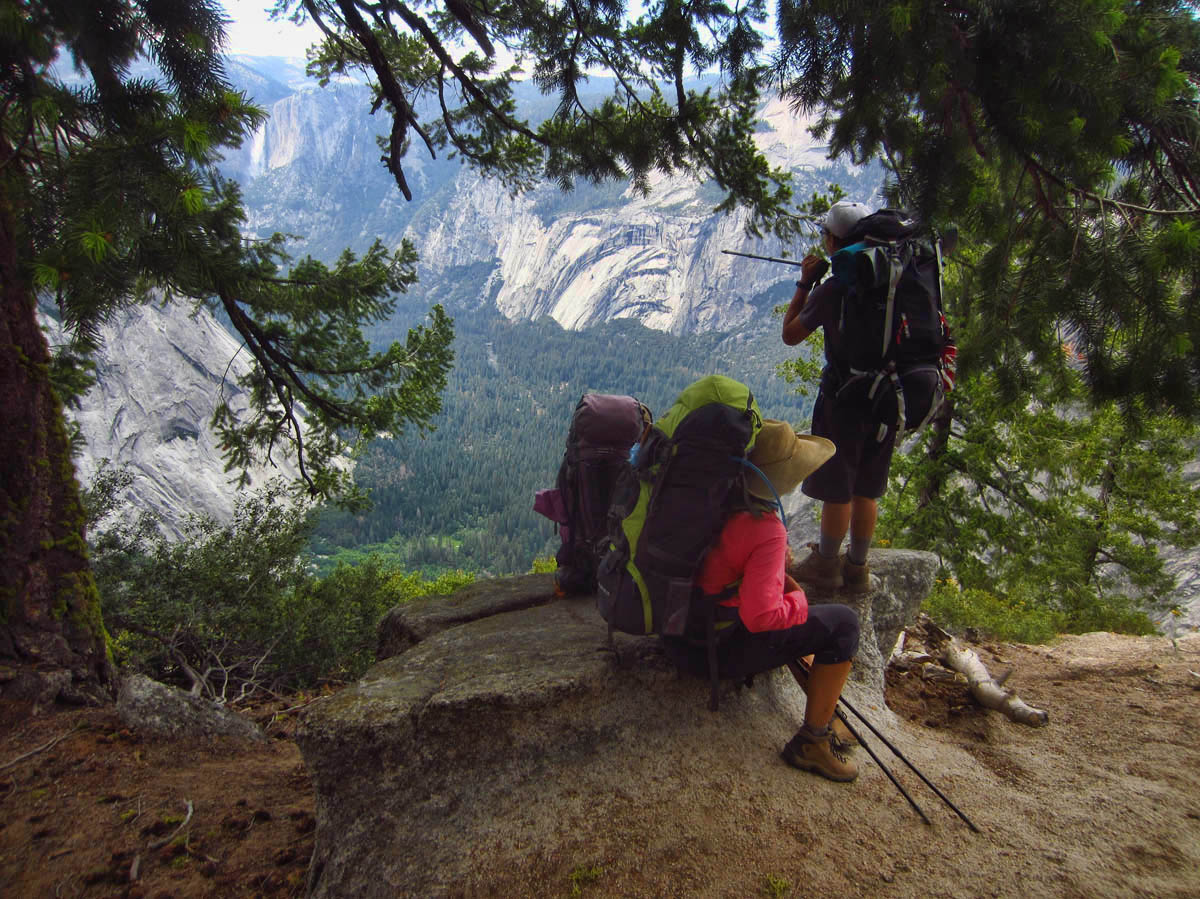 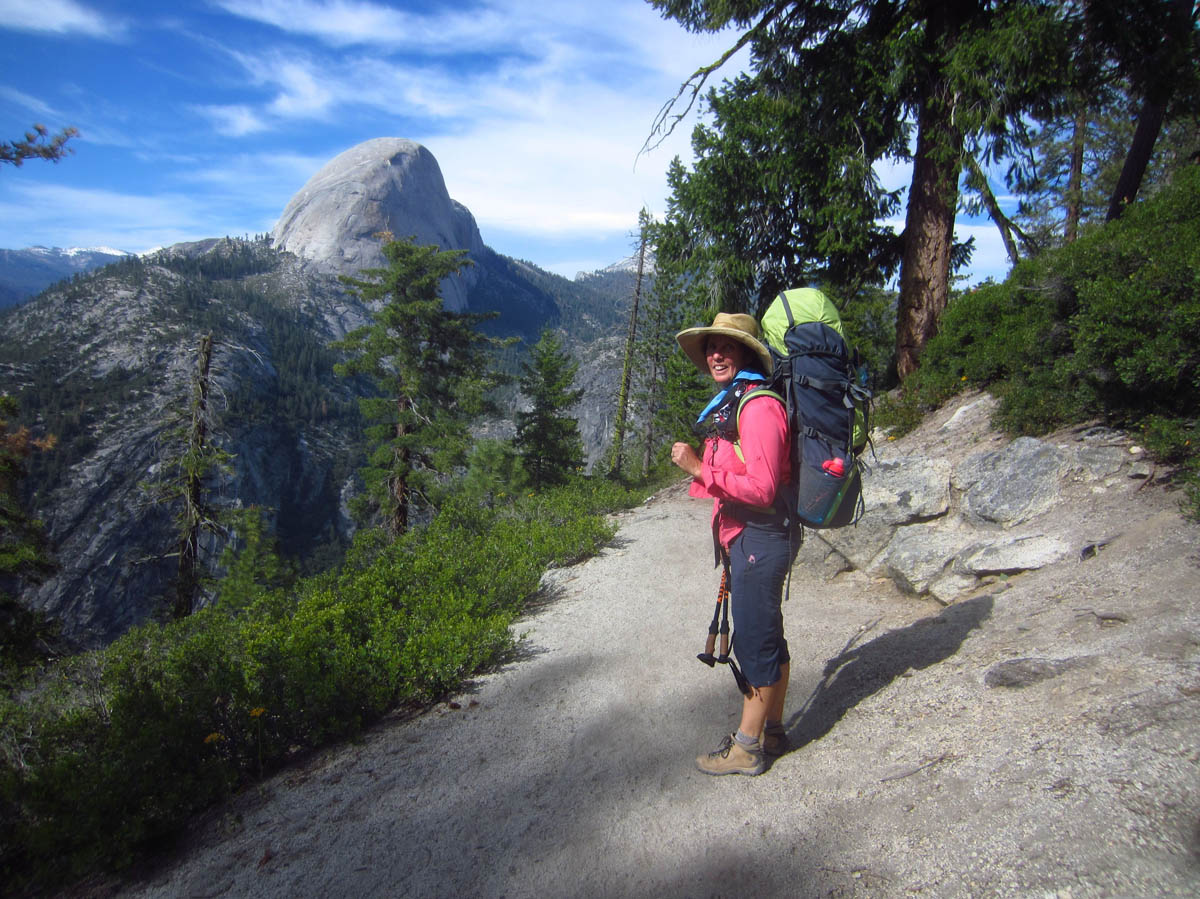 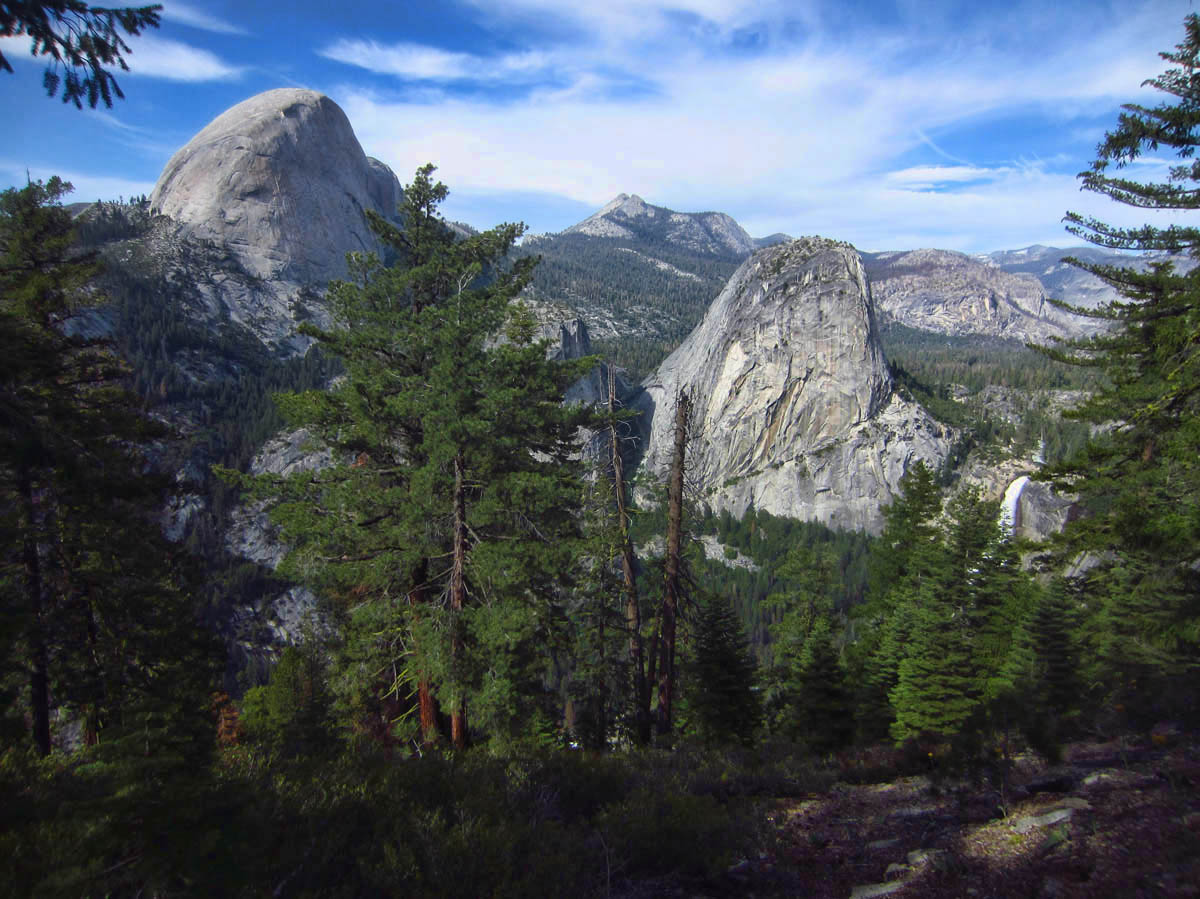 It’s possible to hike this Panorama Trail one way down as a day hike if you buy a ticket on the bus to Glacier Point. 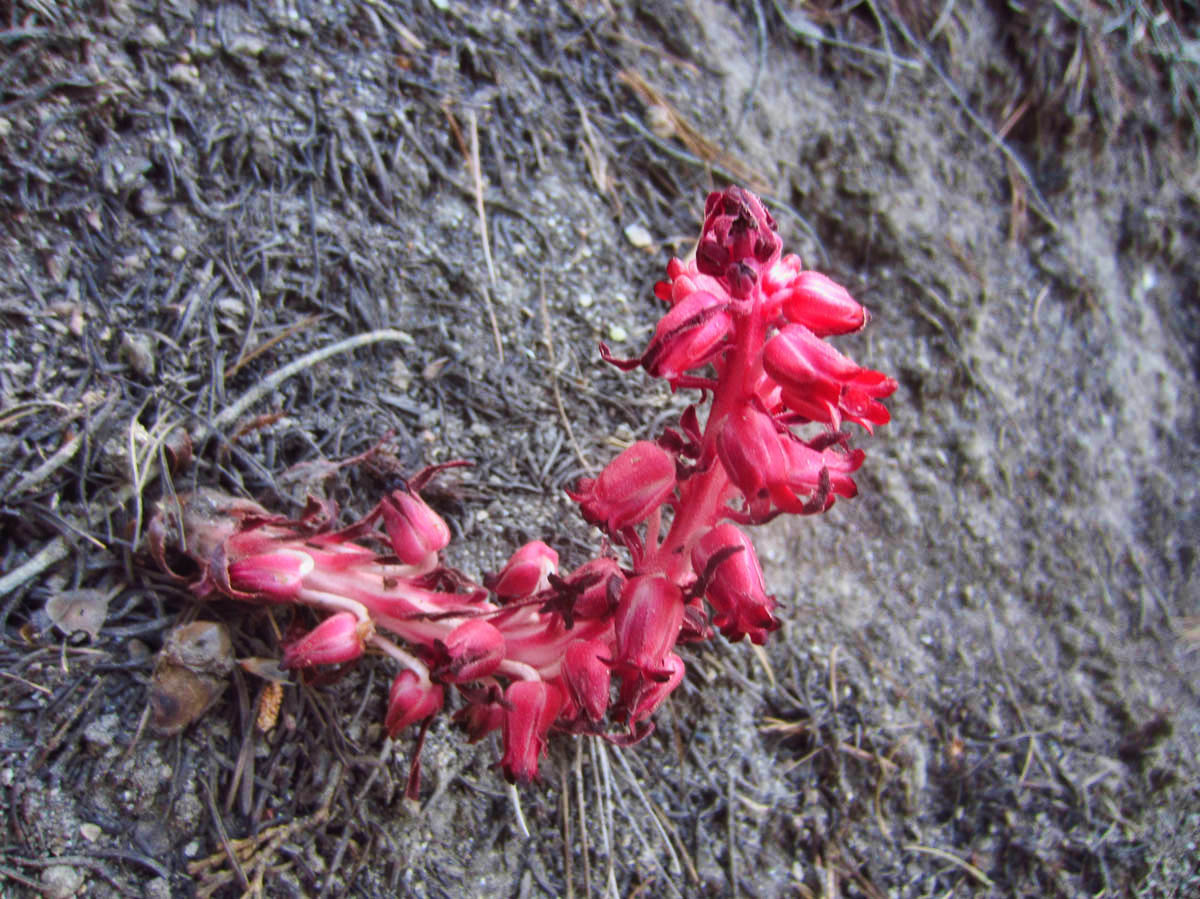 I don’t know what this interesting plant is, but they were growing in the shady part of the forest, about 6″ tall. Brilliant! 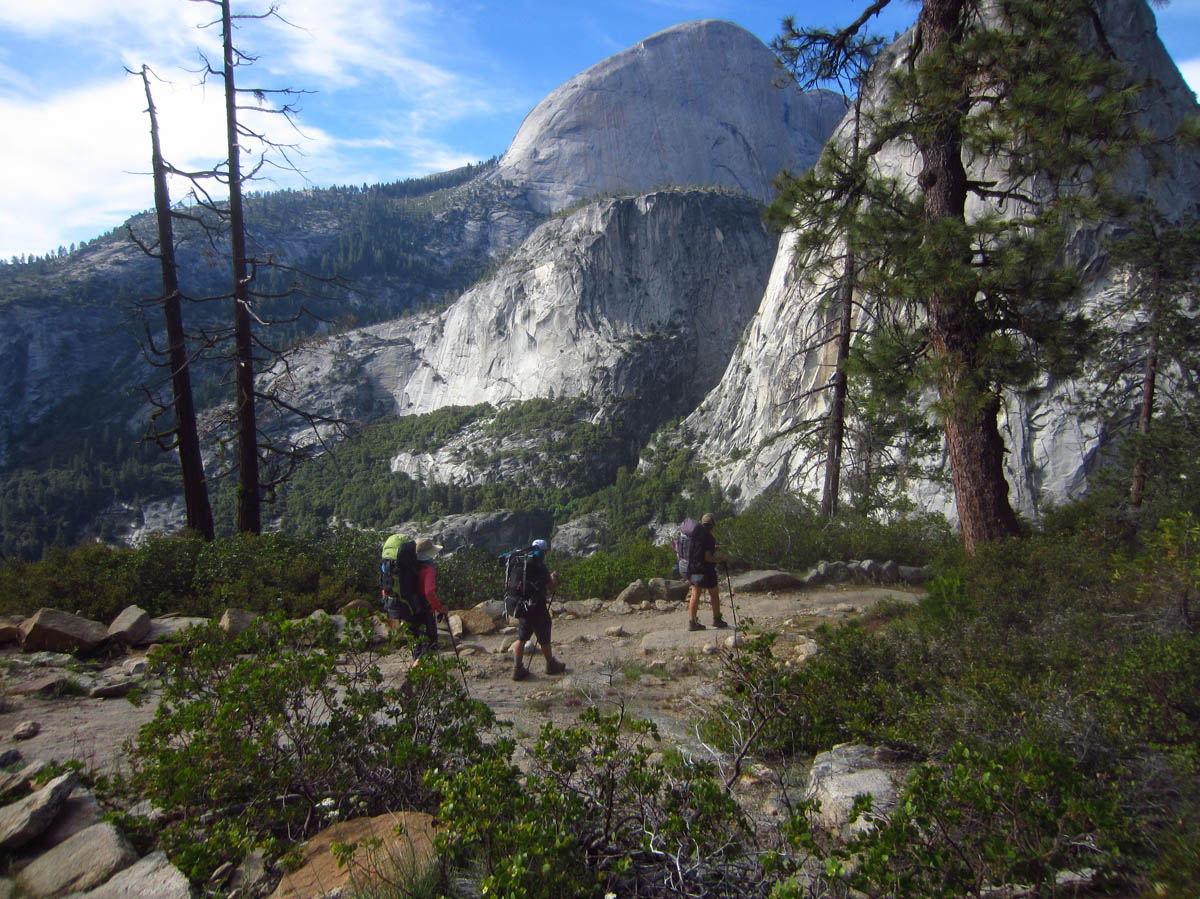 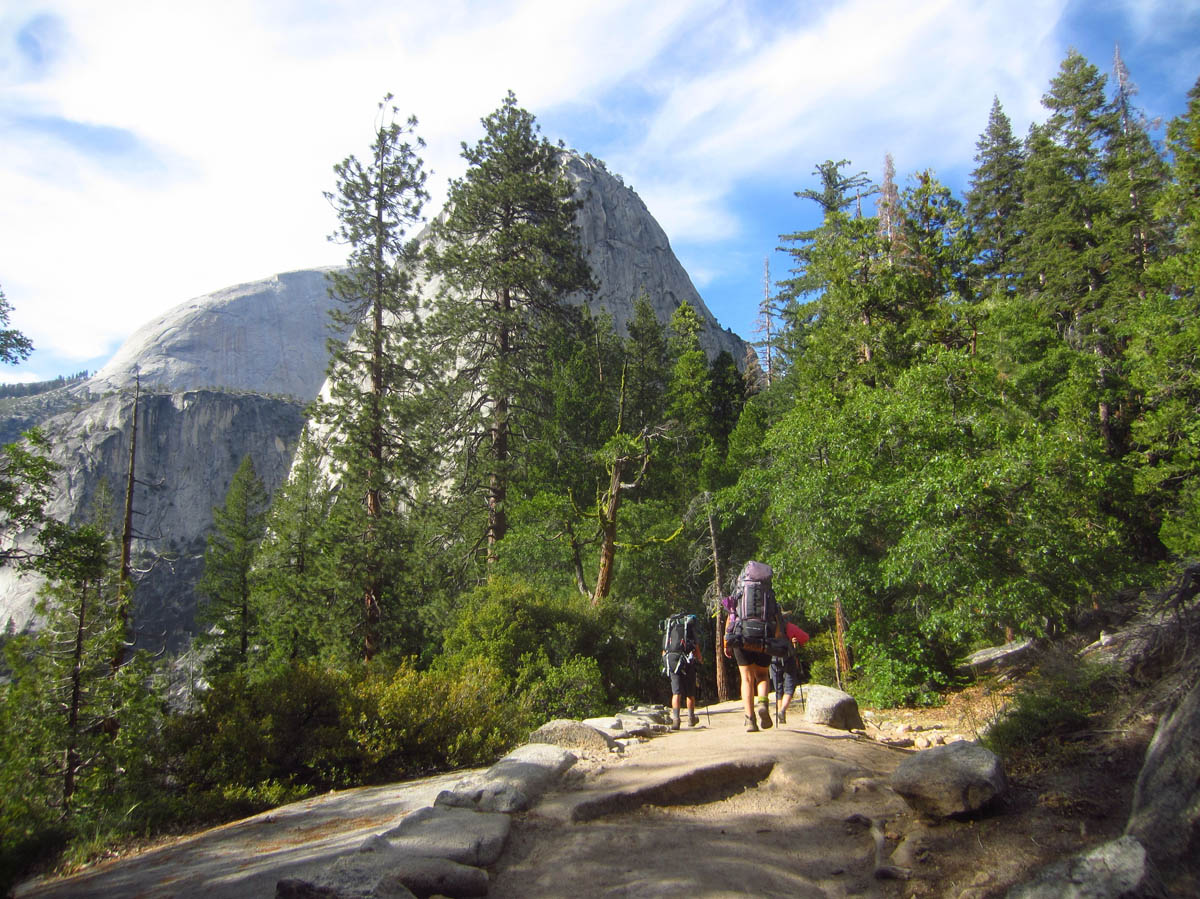 Unlike the unreserved day hiking permits which are given out online, backcountry permits are obtained first come, first served the day prior at the Wilderness Center in the Valley. They begin giving out permits at 11:00am to prevent people from camping out on line overnight. The trailhead determines the number of permits, with twelve being given out for Happy Isles, and another four for the Glacier Point trail head. Since we will be trying for all four Glacier Point permits, we’ve got to nail it.

We decide we will take it in shifts. I offer to take the first shift with the plan to be in line by 6:30am. Depending on how far back in the line I am will determine whether there is any point in waiting, or others coming to relieve me. But as so often happens these days, insomnia strikes at 4:30am. I am awake. Why not? So I pack my folding chair, a blanket, and my thermos of coffee. I am in line by 5:30am, at dawn’s first light. And…I am first in line. 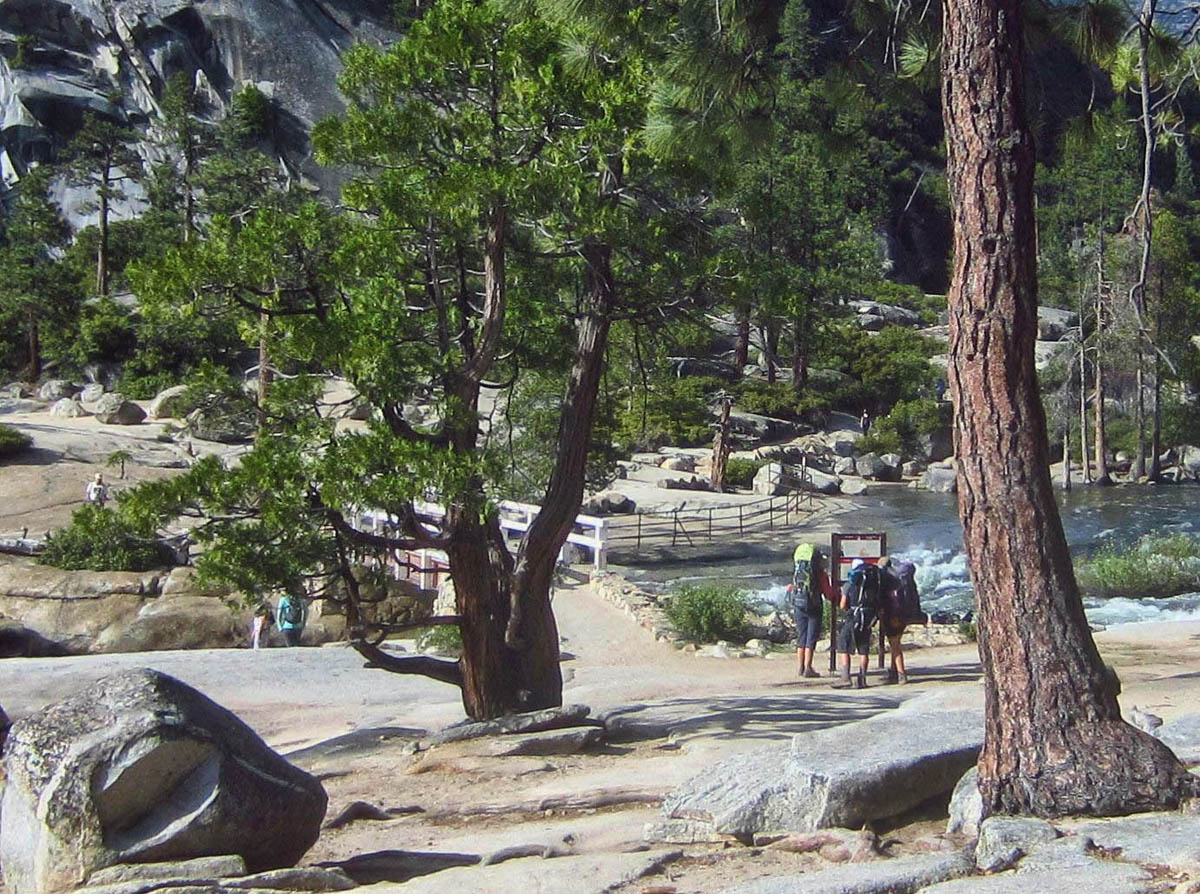 Reaching the top of Nevada Falls where we join up with the John Muir Trail. 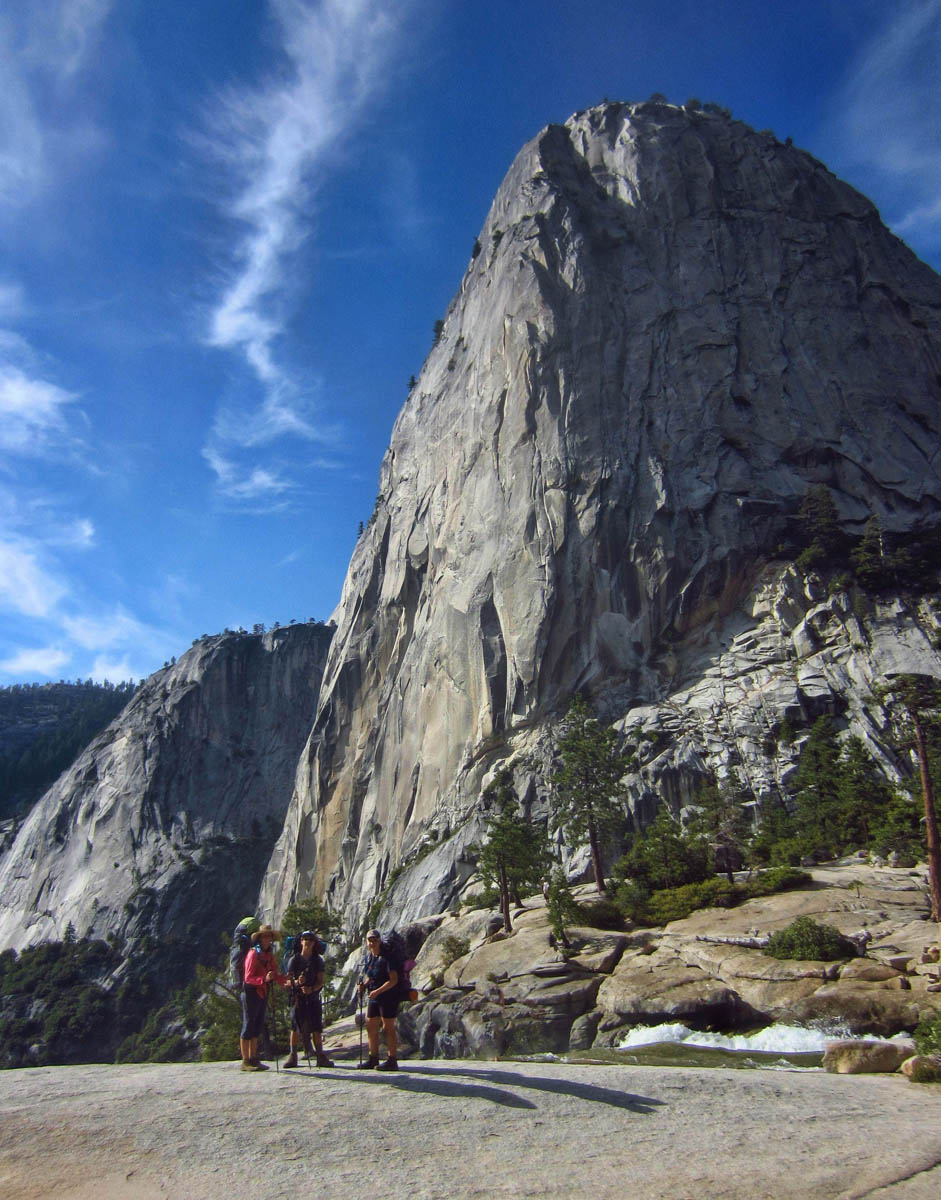 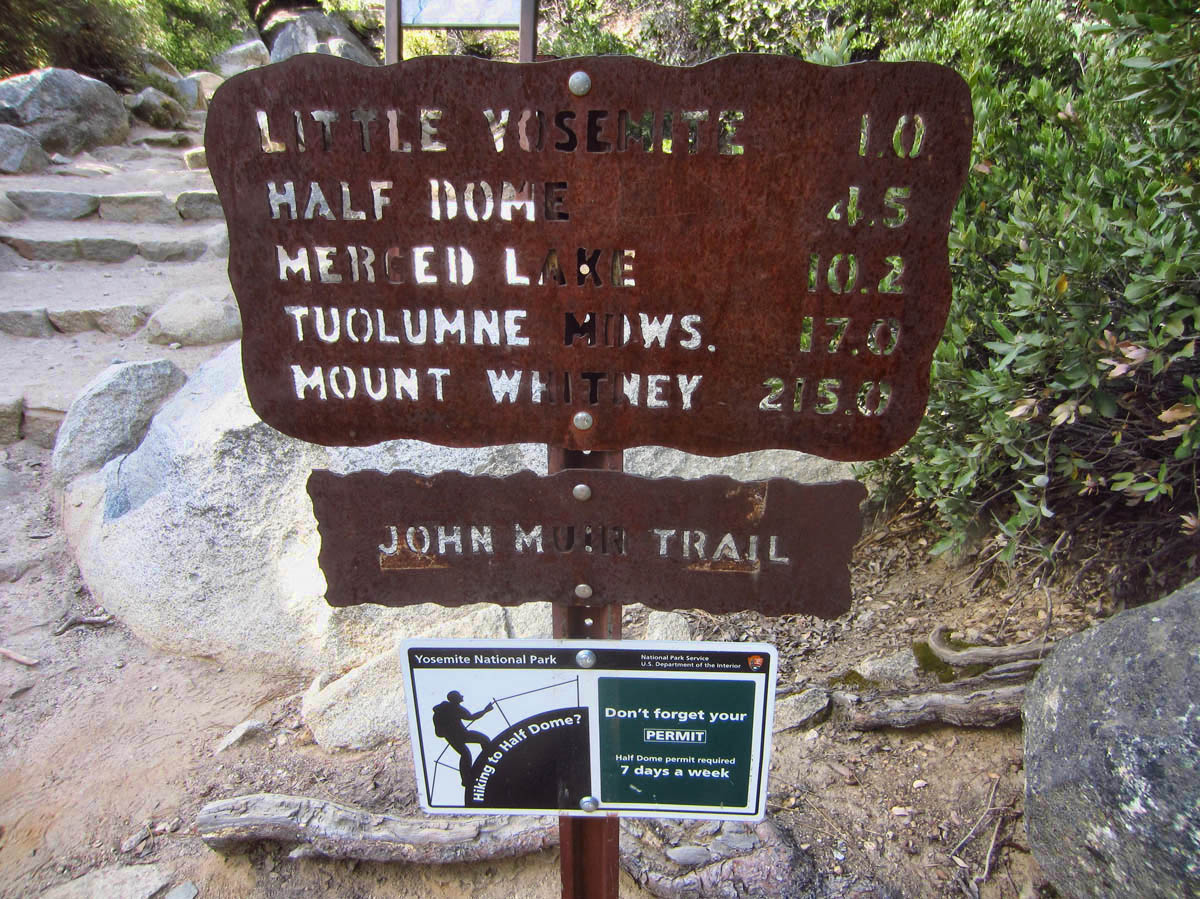 By 8:00am, there are enough in line to fill the permit capacity. Even though permits are not doled out until 11:00am, the Ranger comes out at 8:30am, takes our names, and tells us we are free to go, but to be right back in our same spots at 11:00am to receive our permits. 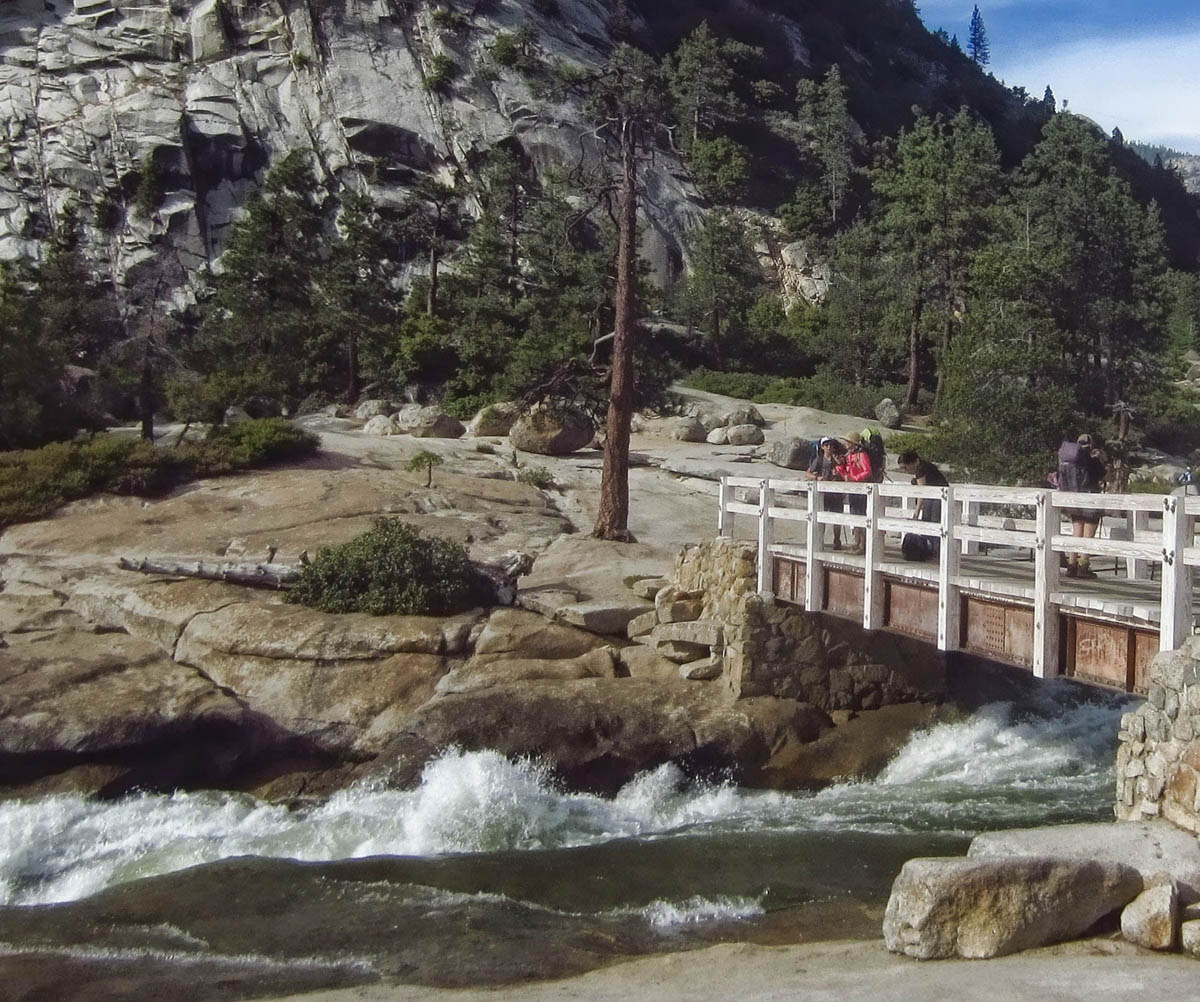 Bridge over the top of Nevada Falls 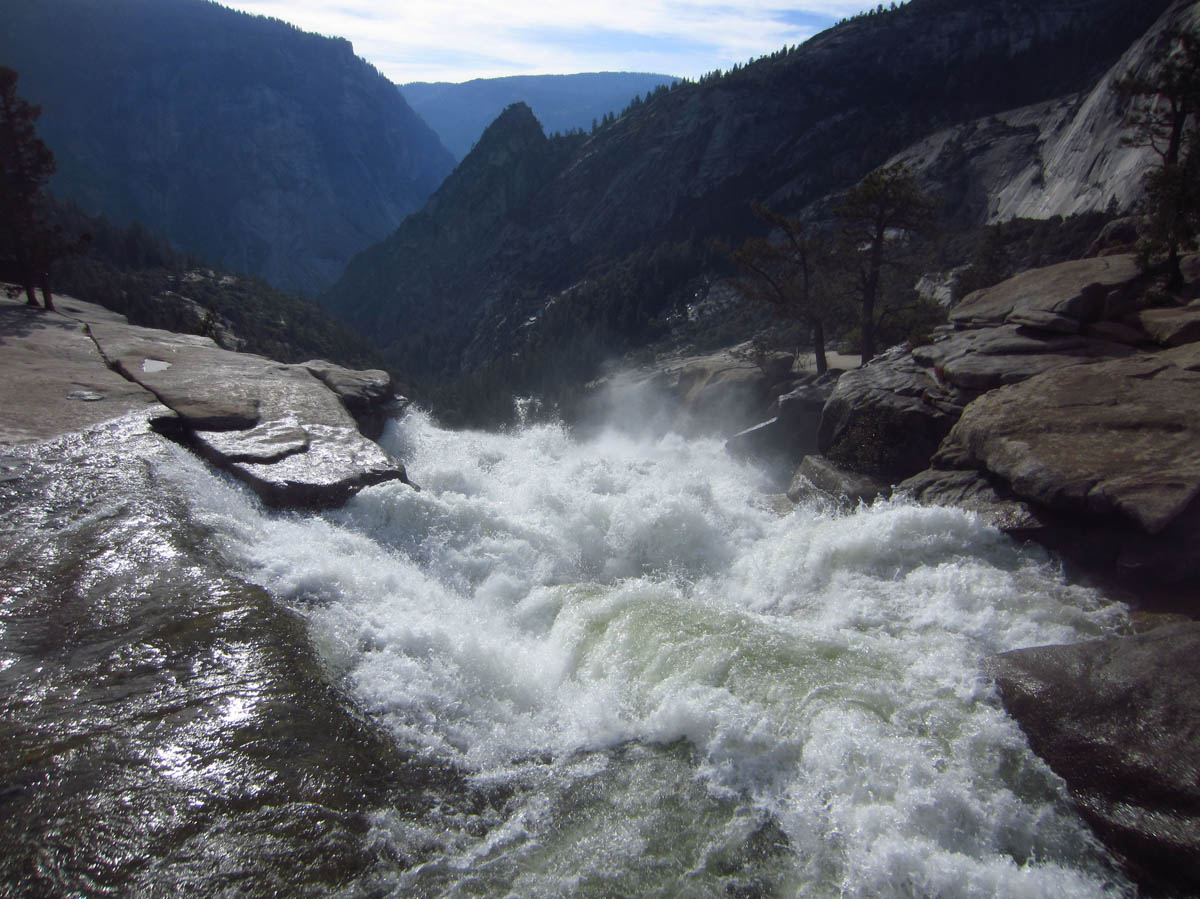 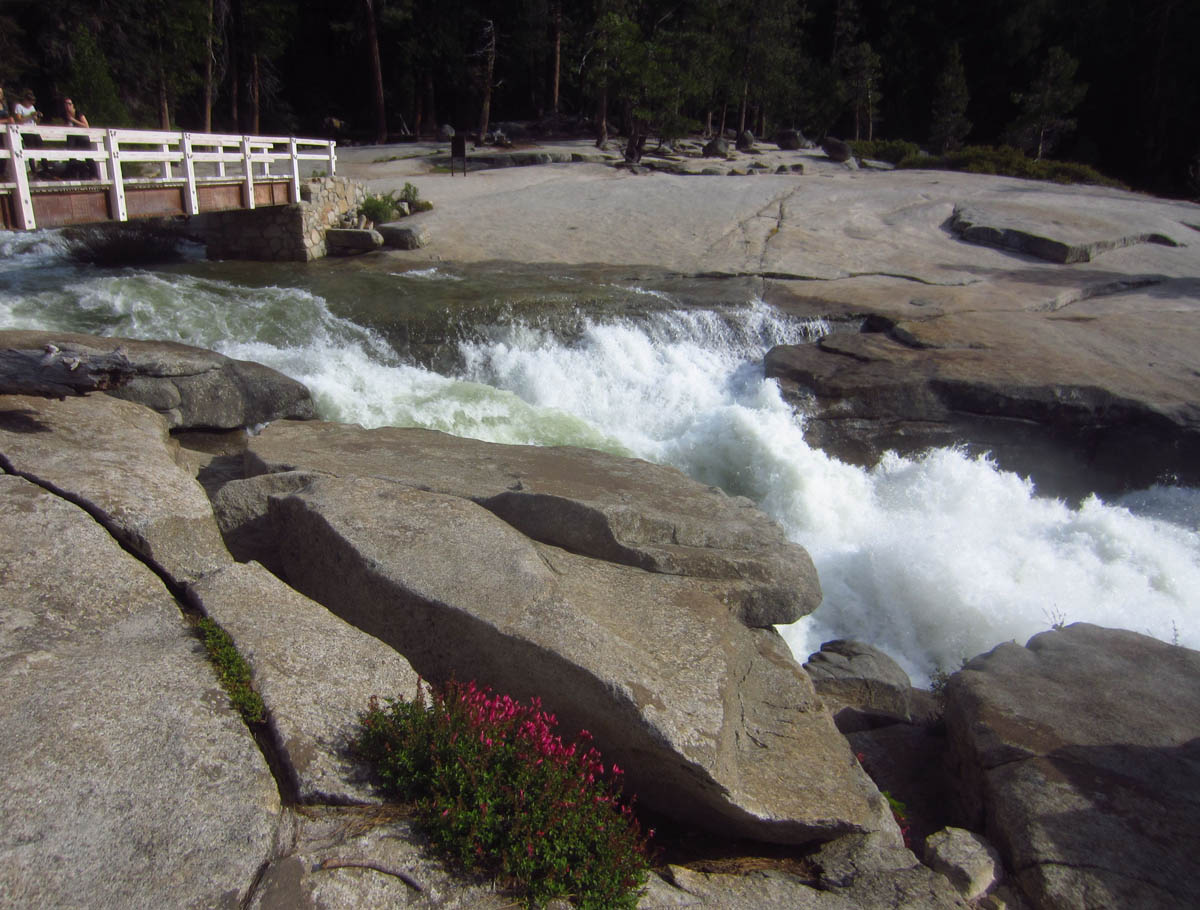 During my time at Yosemite I hear many opinions expressed about this permit system, with as many against as in favor. Many complain that it’s too restrictive. Unfair. Some even start the Half Dome hike in the middle of the night to get a jump on the Ranger who checks permits at the sub-dome. But prior to this permit system, it was not uncommon to wait for 45 minutes at the bottom of the Half Dome cables for a turn to climb the dome. And studies have shown that more time on the cables means greater certainty for accidents, even fatalities. 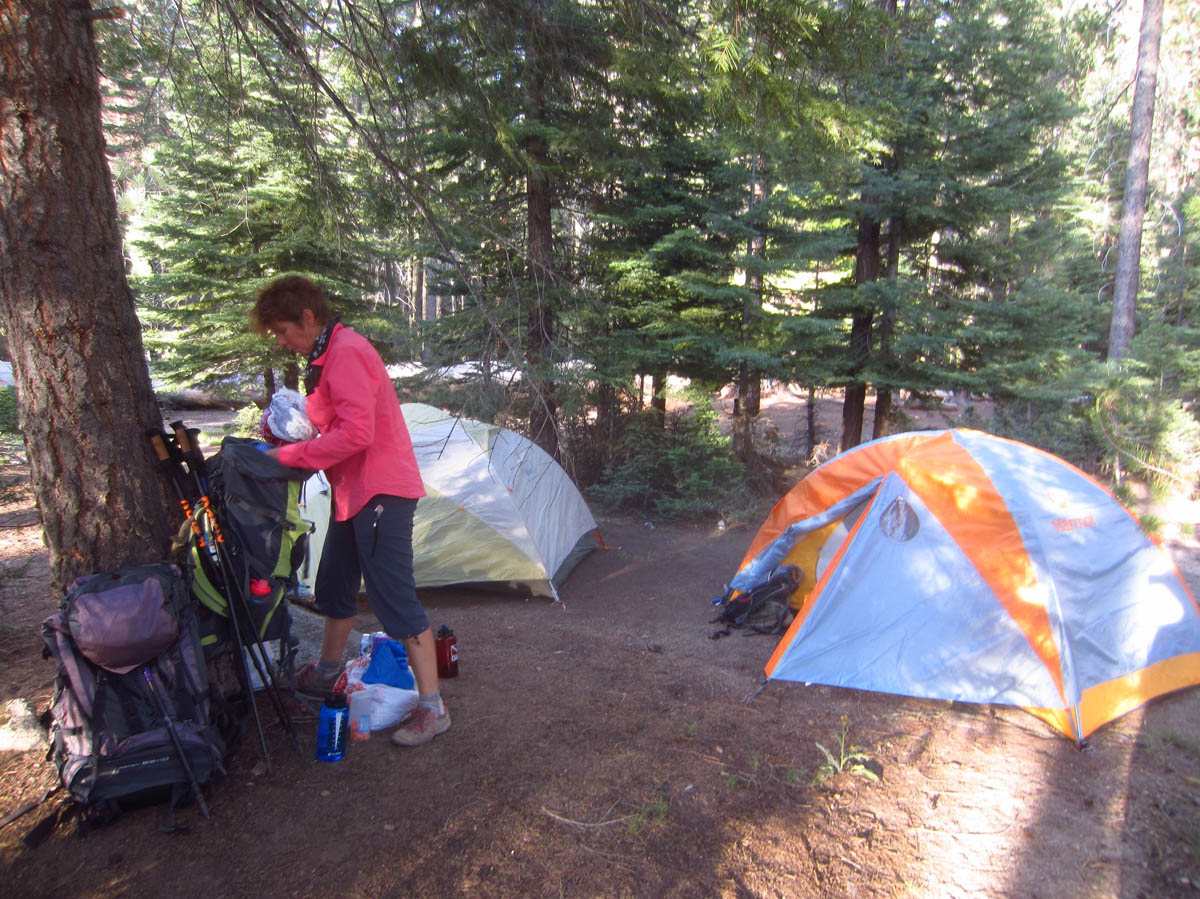 After over 7 miles down and back up the Panorama and Nevada Falls trails, we arrive at Little Yosemite Valley backcountry camp. 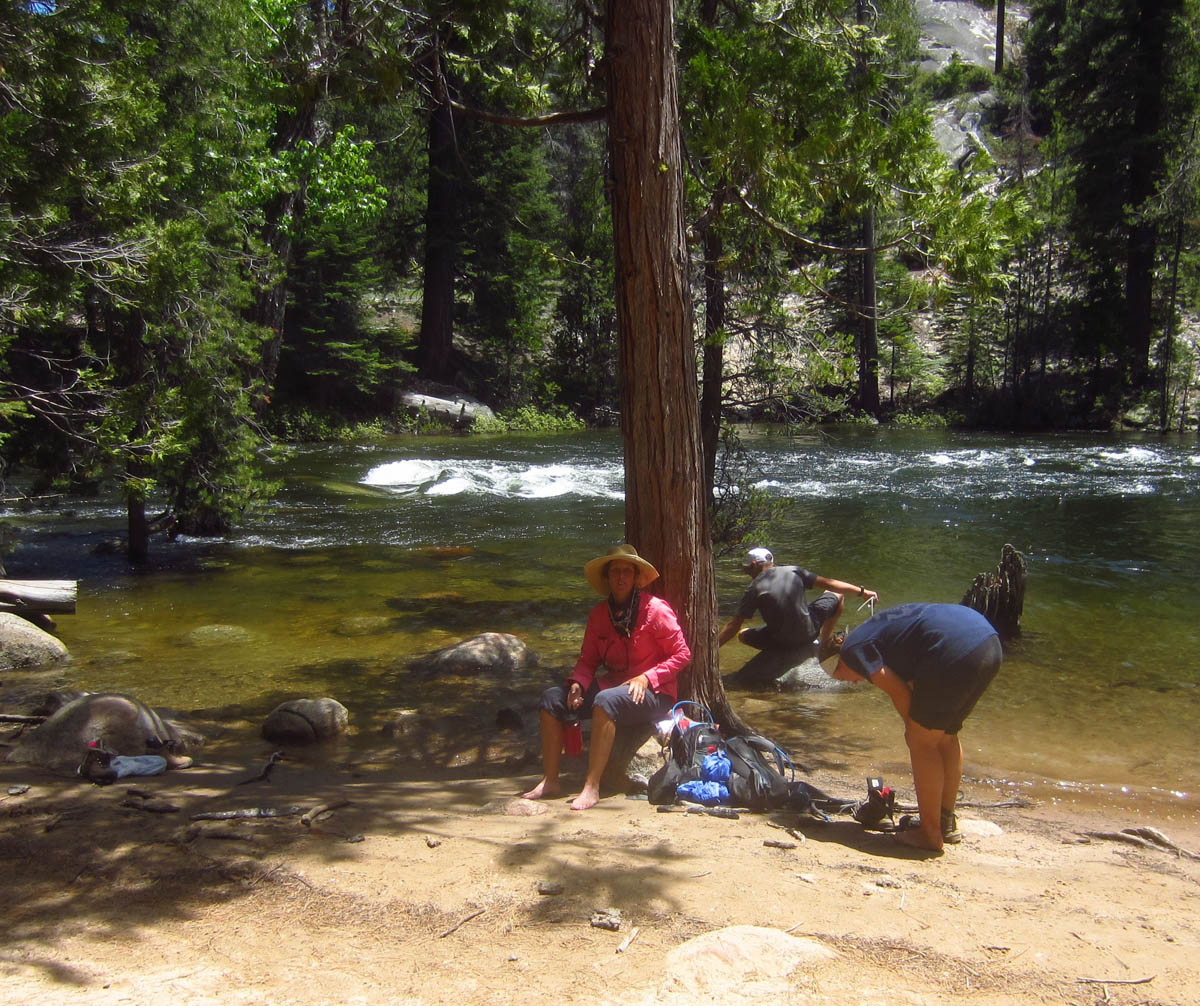 The camp is located alongside the cool, refreshing Merced River 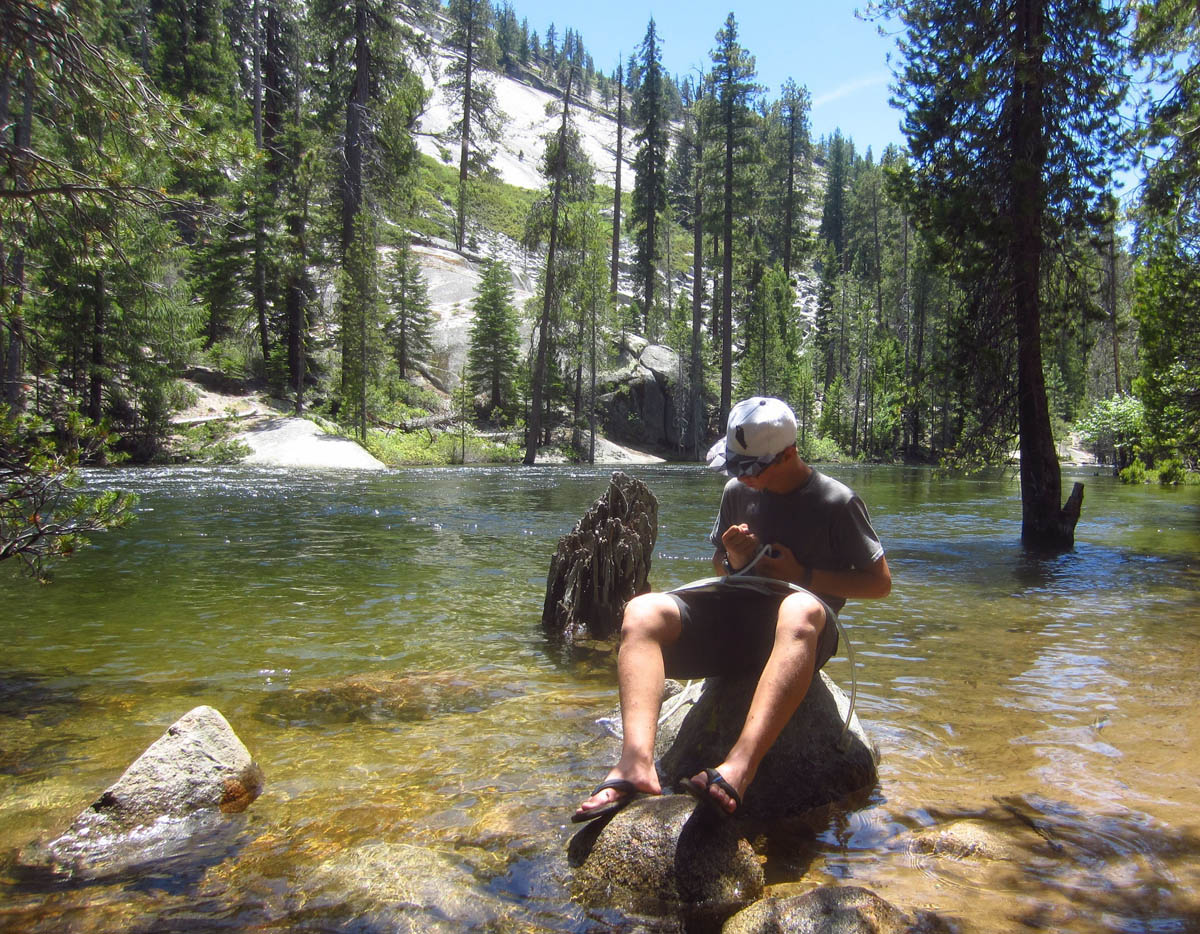 Jona purifies us all some water from the river

Maybe I would feel differently if I’d been shut out. Had I not scored in getting the permit, or having friends who willingly shared their good fortune of a campsite in peak season, maybe I would also be poo-pooing the permits. But I was surprised at the number of times I was stopped on the trail by people asking “Is there a Ranger ahead?” Judging from the number of people attempting to circumvent the system, I for one am a proponent of the crowd control. 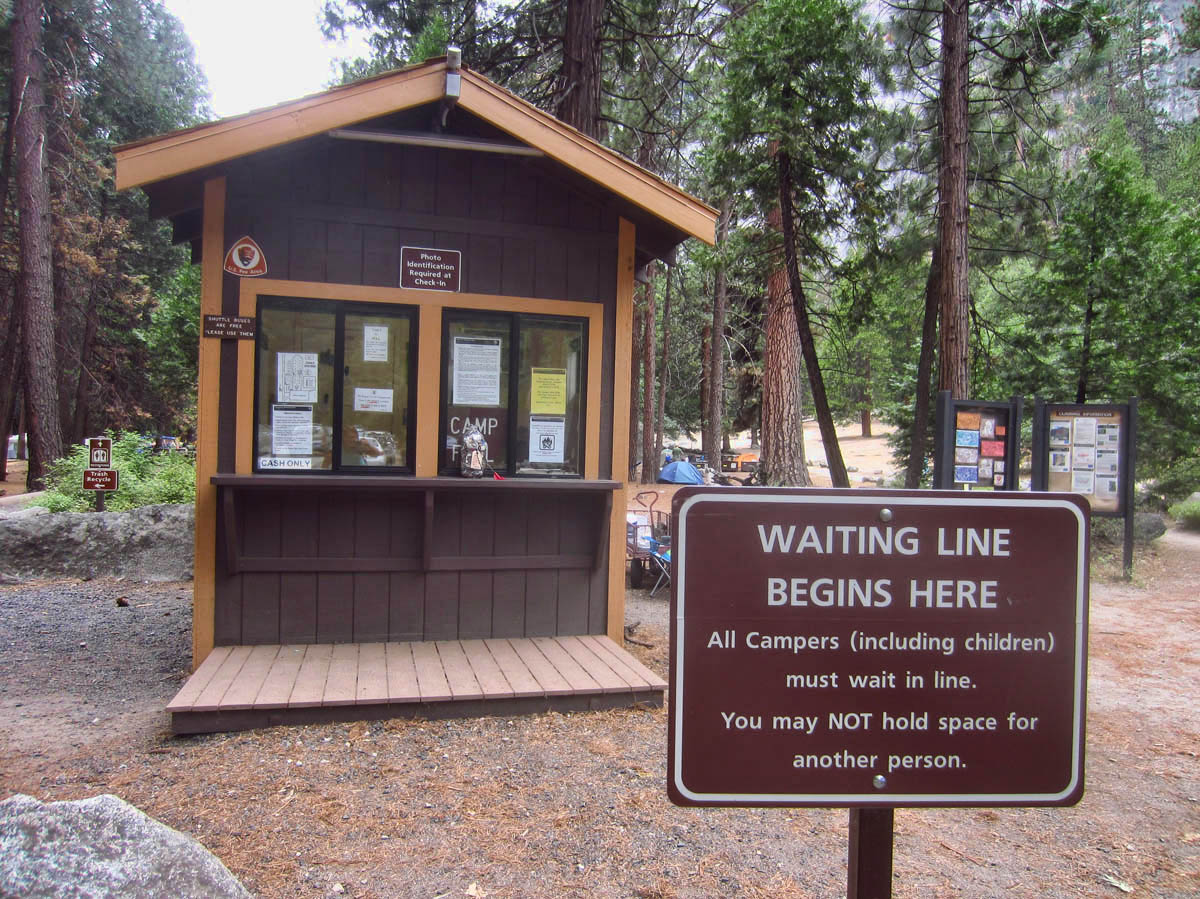 Hurry up and wait!

(P.S. If you should ever find yourself in Yosemite Valley with no place to park, drive out the Merced Exit and go five miles past the kiosk, where there are plenty of turn-outs along the Merced River in the Sierra National Forest.)