As a final look at Yosemite National Park, no blog series would be complete without a tribute to one of it’s biggest advocates and most famous of residents, Ansel Adams.  Of course, you know I have to do it, right? The tonality of the sheer granite cliffs is begging for it. The shadows and light demand it. Any self-respecting photography enthusiast has to do it…so forgive me, Ansel, while I play momentarily with your muse of monochrome… 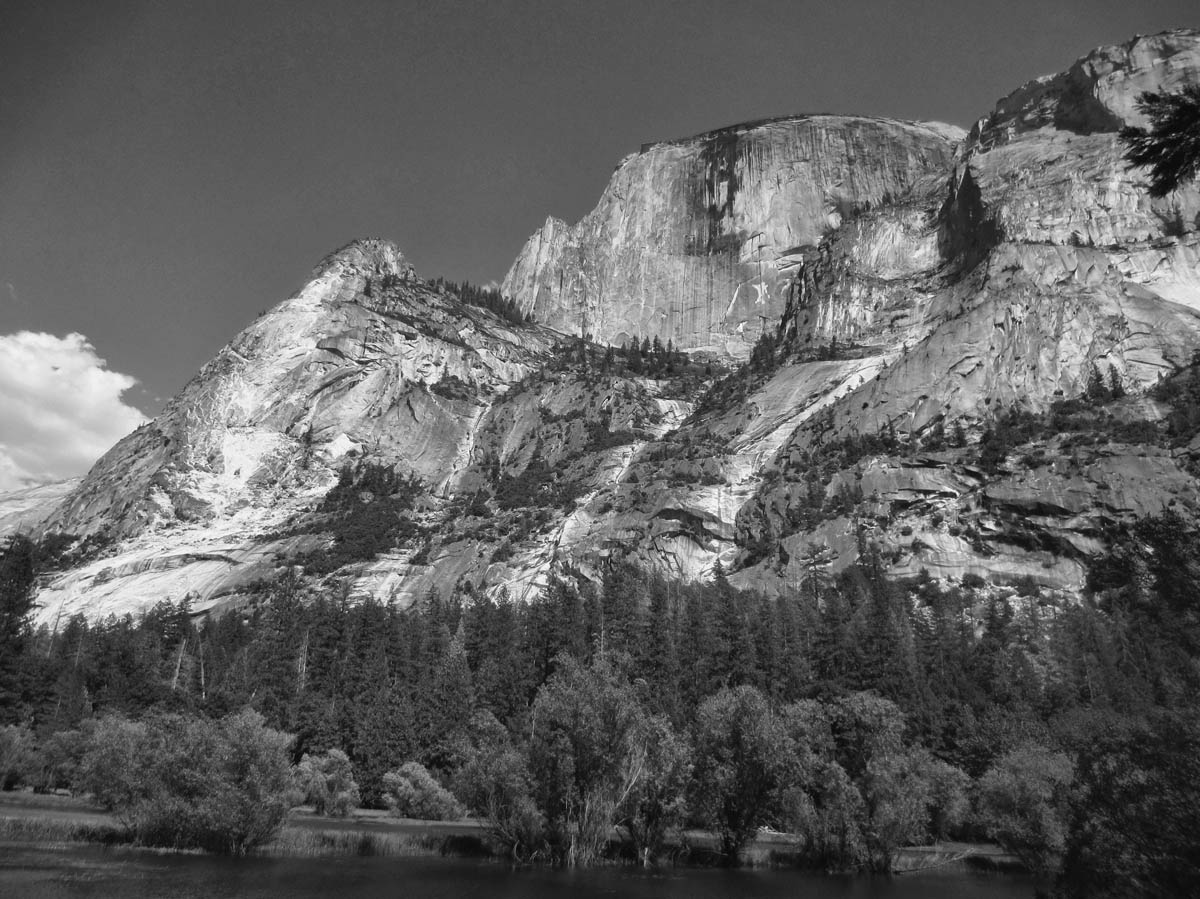 I always attributed Ansel Adams famous grayscale landscapes to that of making an artistic  statement. It hadn’t really occurred to me until I considered the timeframe that it was more a matter of medium, as it would be 20 years after his first photographs of Yosemite before color film was even invented.  In fact, Ansel Adams did photograph in color, but he didn’t feel he had the same artistic control over color in the darkroom as he did with black and white.  He had perfected darkroom techniques such as “dodging and burning” in his black and white work to add definition, texture, and luminosity to his photographs, which earned him the title of “The Poet of the Grayscale.” 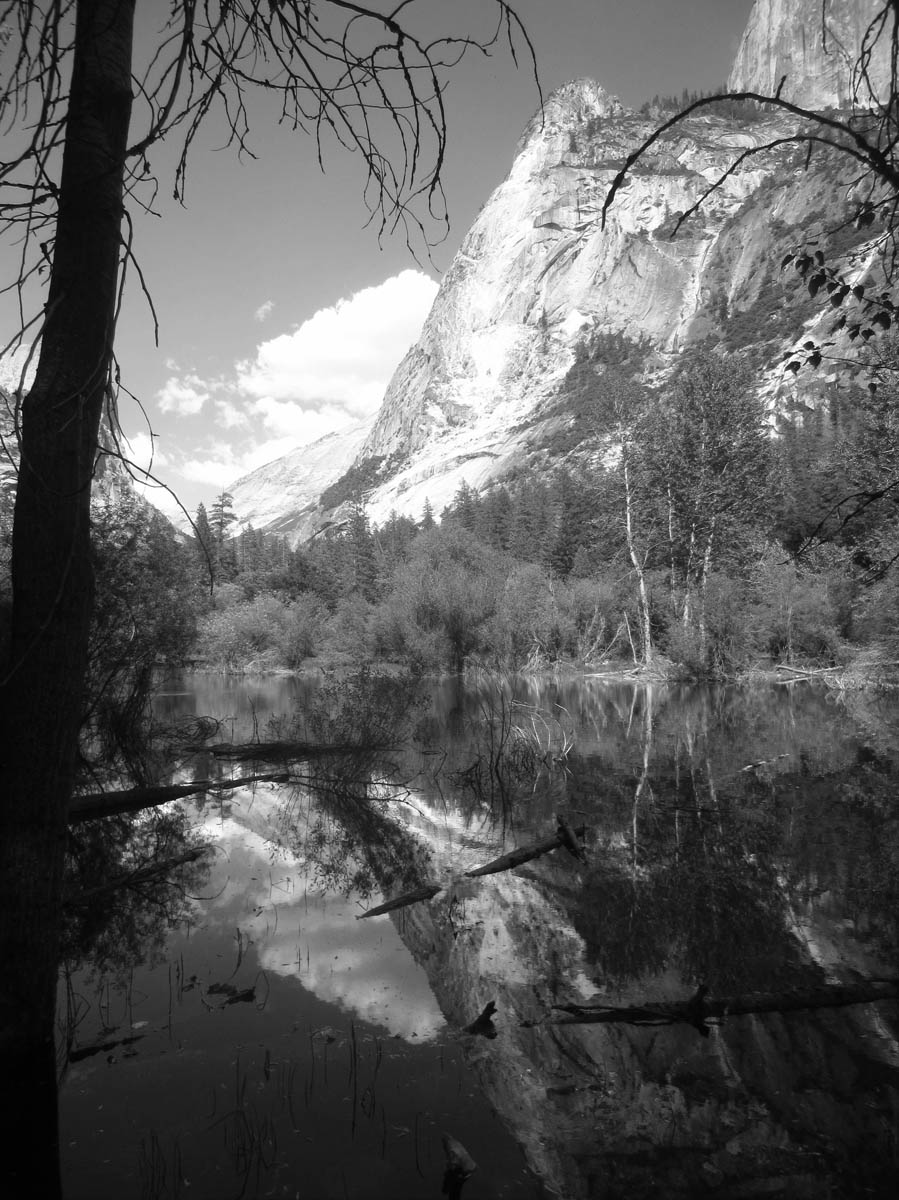 Clearly looking into one of Ansel Adams photographs of Yosemite is evocative, as he felt it was important for the “photographs to look like the mountain felt.”  His need for “expressing something built up from within rather than extracted from without” is palpable.  In reading through some of his quotes, it becomes evident that he was as much about what was happening on his side of the camera as through the lens.  I found it no surprise that he was heavily influenced by Ralph Waldo Emerson. 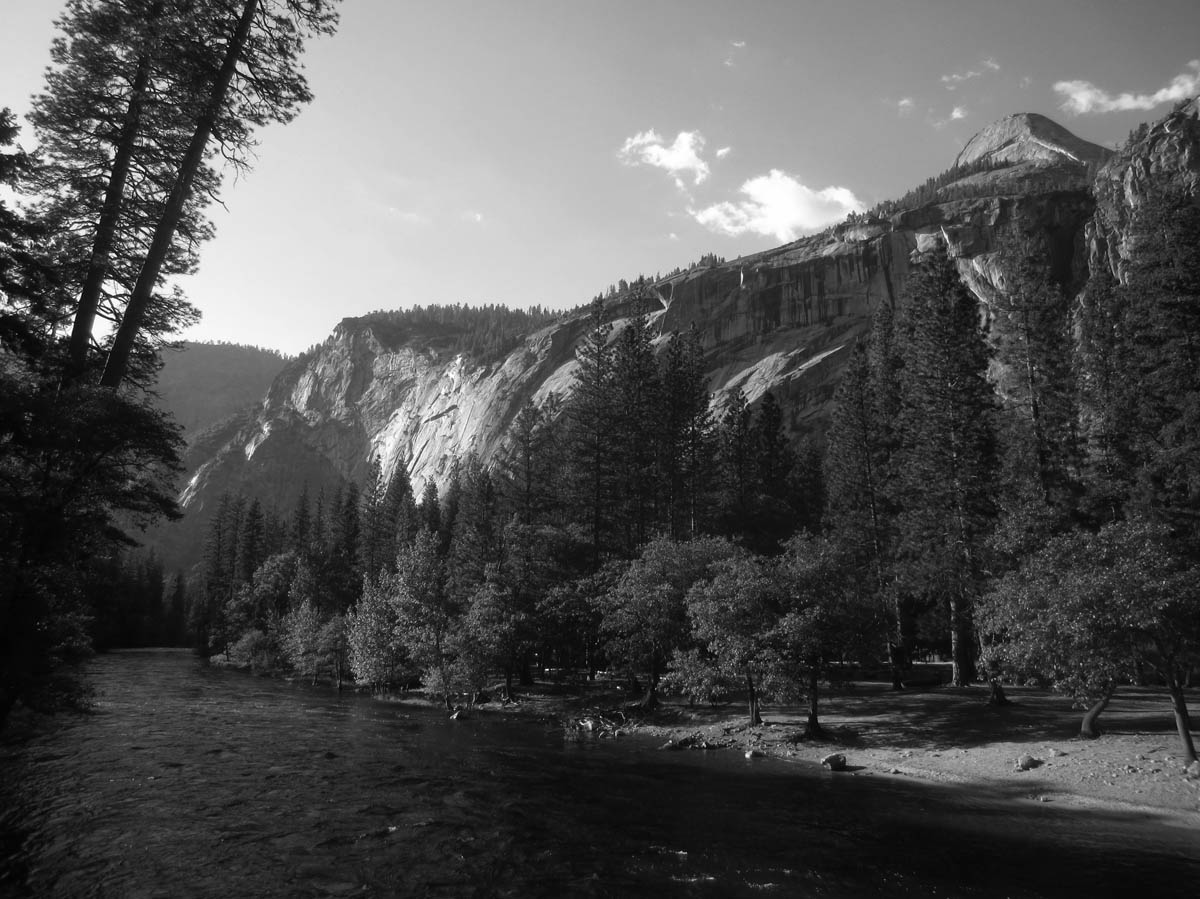 Ansel Adams used his compelling work as an activist for conservation, lobbying Washington for the protection of the “wild.”  His book, Sierra Nevada, The John Muir Trail, presented to President Roosevelt was considered instrumental in influencing the President to designate Kings Canyon as a National Park.   In turn, the Minarets Wilderness in the Inyo National Forest along with an 11,000+ peak within the wilderness boundaries were named the Ansel Adams Wilderness and Mount Ansel Adams posthumously. 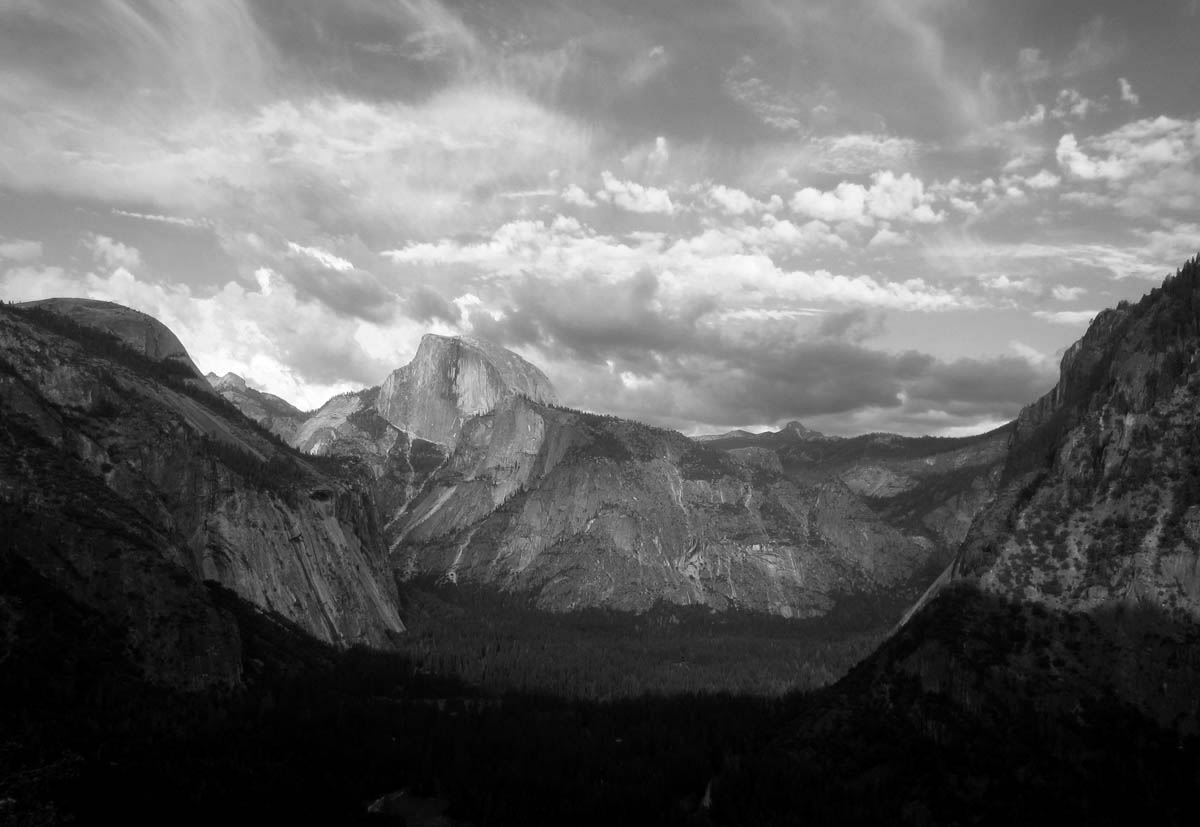 I was also surprised to learn that Adams was an accomplished pianist with the intent to make music his profession. Though mountains won out over music, it was still a prominent part of his life, no doubt crossing over to influence his art as evidenced by his analogy, “The negative is the equivalent of the composer’s score, and the print the performance.” 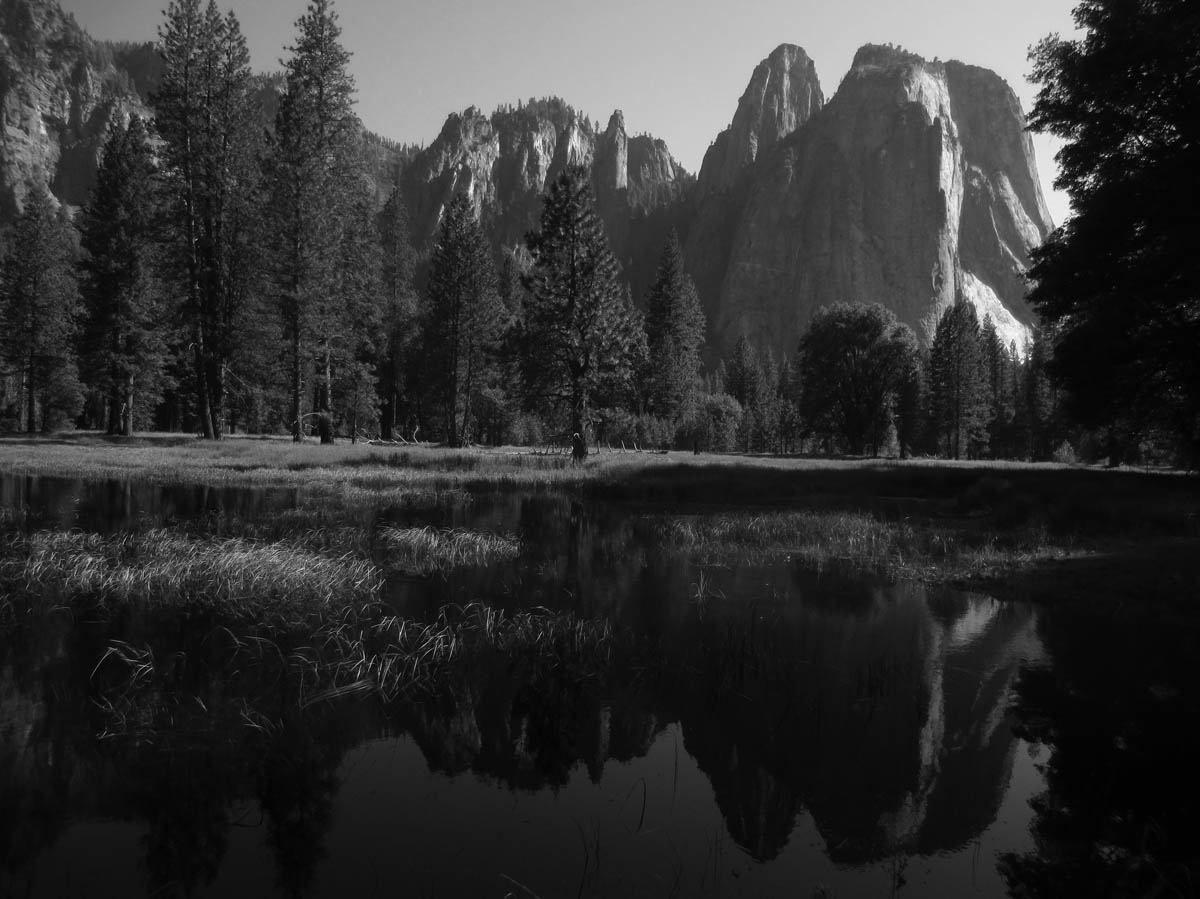 The Ansel Adams Gallery has a premier presence in Yosemite Valley still today, sitting right in between the Visitors Center and the Wilderness Permit office.  It’s the original Best’s Studios, now renamed after the artist, where Ansel met his bride back in the early 20’s. 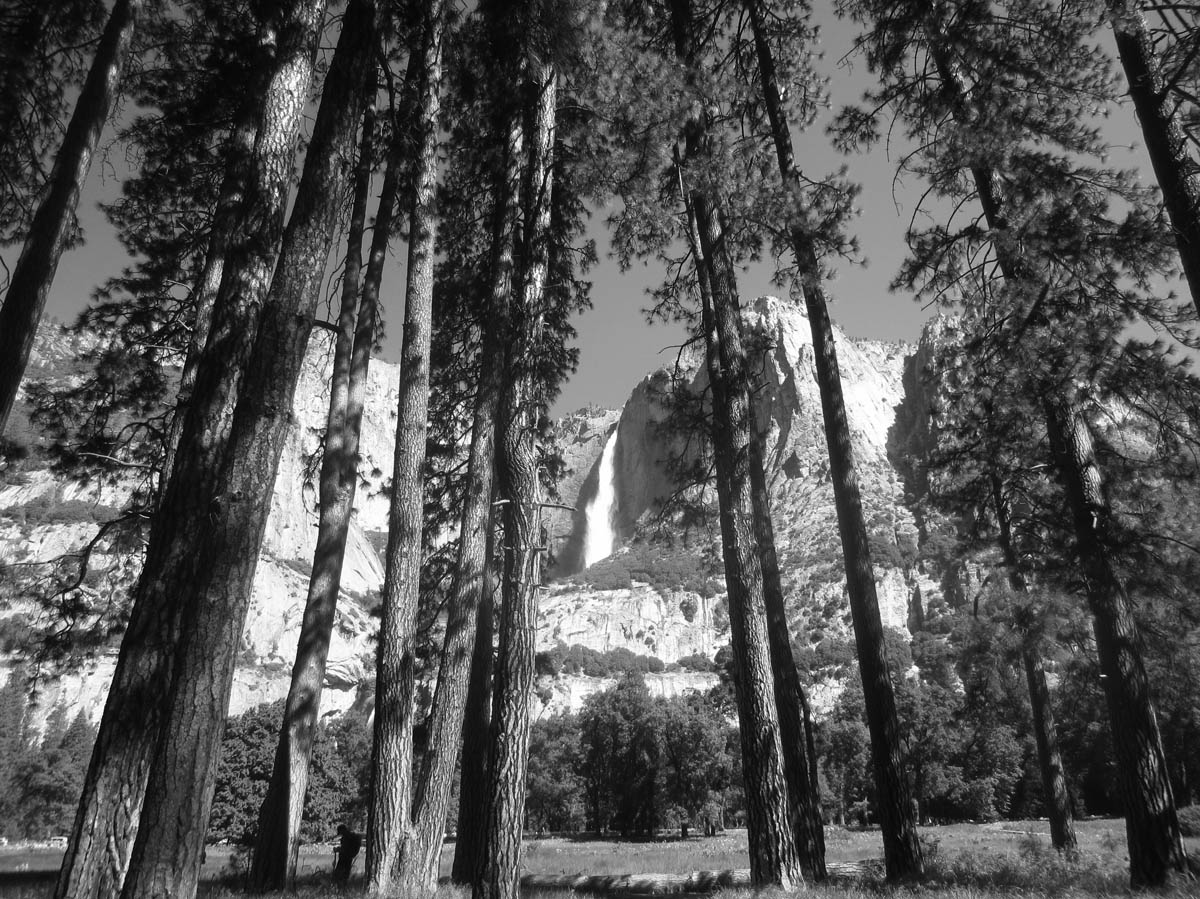 While in Yosemite, I signed up for a free 90 minute “camera walk” with one of the gallery employees, Julie.  She took a group of 15 of us on a stroll across Cook’s Meadow while we talked about Ansel’s life and his work. 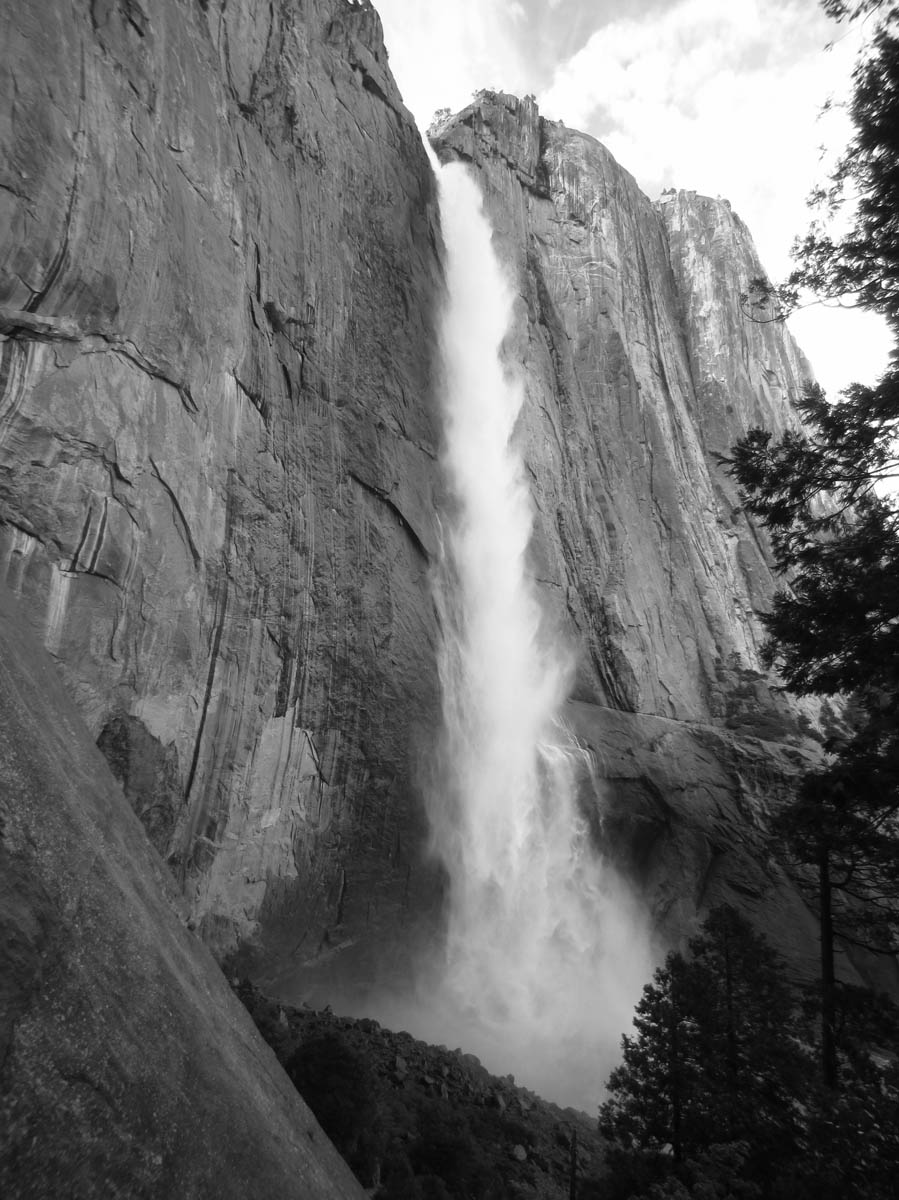 In this meadow, we had an open shot at some of the more iconic areas that he photographed such as Yosemite Falls and Half Dome.  Due to the heavy, cumbersome nature of the glass plates that Ansel used, he often had no more than three opportunities at a shot.   Julie challenged us to think about the photograph we were about to “make,” and imagine the position and angle we would use should we, too, only have three shots.

Here is my best attempt: 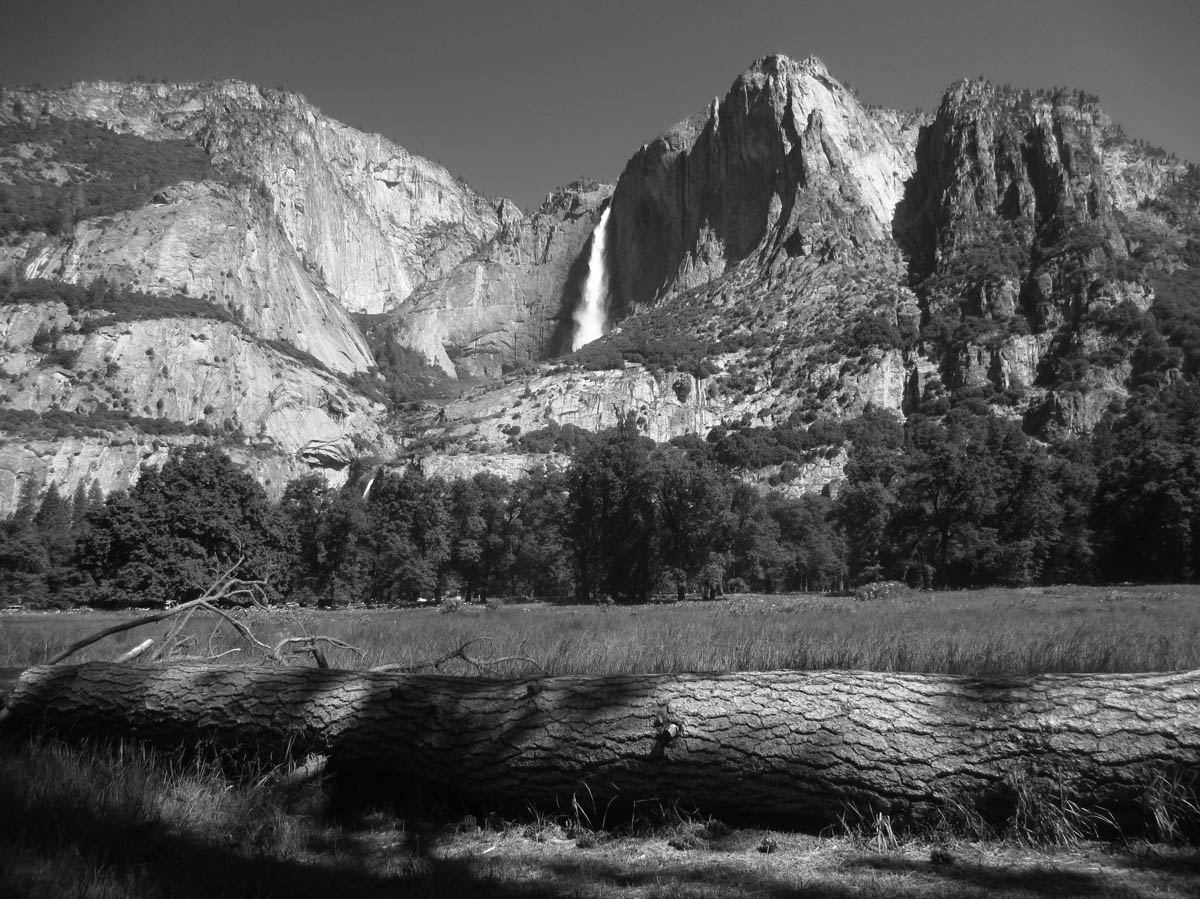 During this camera walk, I became more aware of light and shadow, intensifying my focus on making that one shot count, considering what I wanted to convey to the viewer.  In doing so, I acquired a greater appreciation for Ansel’s focus from both sides of the lens.  But I found his words equally inspiring as his photographic work.  Here are a few of my favorite quotes:

“There are always two people in every picture: the photographer and the viewer.”

“A good photograph is knowing where to stand.”

“You don’t take a photograph, you make it.”

“A great photograph is one that fully expresses what one feels, in the deepest sense, about what is being photographed.”

“When words become unclear, I shall focus with photographs. When images become inadequate, I shall be content with silence.”

“Some photographers take reality and impose the domination of their own thought and spirit. Others come before reality more tenderly and a photograph to them is an instrument of love and revelation.”

“No man has the right to dictate what other men should perceive, create or produce, but all should be encouraged to reveal themselves, their perceptions and emotions, and to build confidence in the creative spirit.” 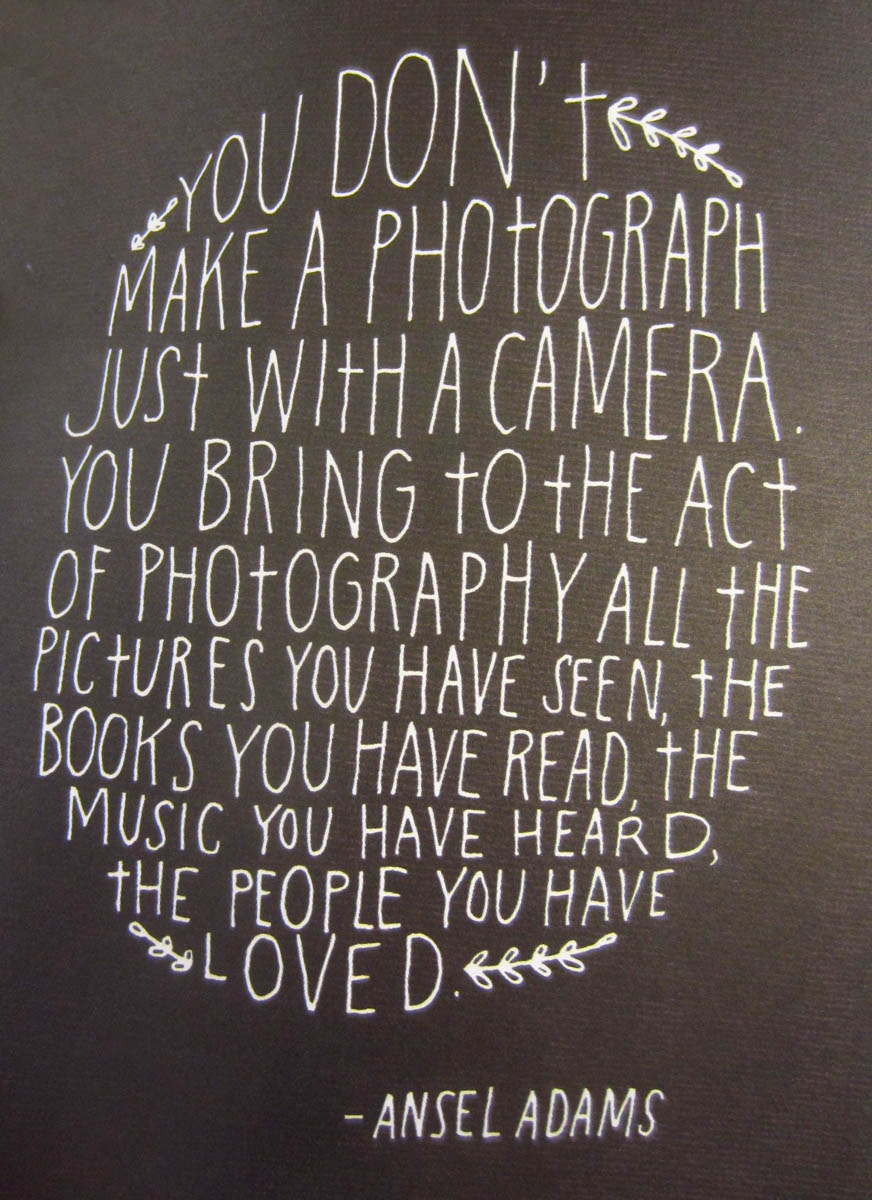 17 thoughts on “Tribute to the Poet of Grayscale”