I have a very definite purpose for visiting Point Reyes, and timing is everything. The Point Reyes Lighthouse is only open for visitation Friday through Monday. Though visiting on the weekend is the worst possible time as far as crowds, the weather seems perfect. If I wait until Monday, the last open day while I am here, I could risk being denied the opportunity to visit if the weather turns. The lighthouse sits prominently perched along the steep rocky shoreline known as the windiest point along the Pacific. If the wind gets high enough, they shut down the 300 stairs leading down to the lighthouse.

But never fear, because it’s a glorious Sunday morning in the Olema Campground. Not a cloud in the sky, and already the sun is baking down on my bare limbs as I pack the Tracker for my day trip. There are several hiking trails out near the lighthouse that I want to explore while I am out on the point, so I pack a picnic lunch. Typically, my “hikers lunch” is a peanut butter sandwich….with jam if I want to splurge. But yesterday was the Point Reyes Farmers Market, and I bought myself some special treats. Homemade whole-wheat bread laced with apricots and pecans, triple cream brie from Cowgirl Creamery, and figs soaked in Port wine as a garnish. I even bring along a split of Sauvignon Blanc, knowing a hike will be sufficient in walking it off before my drive back. 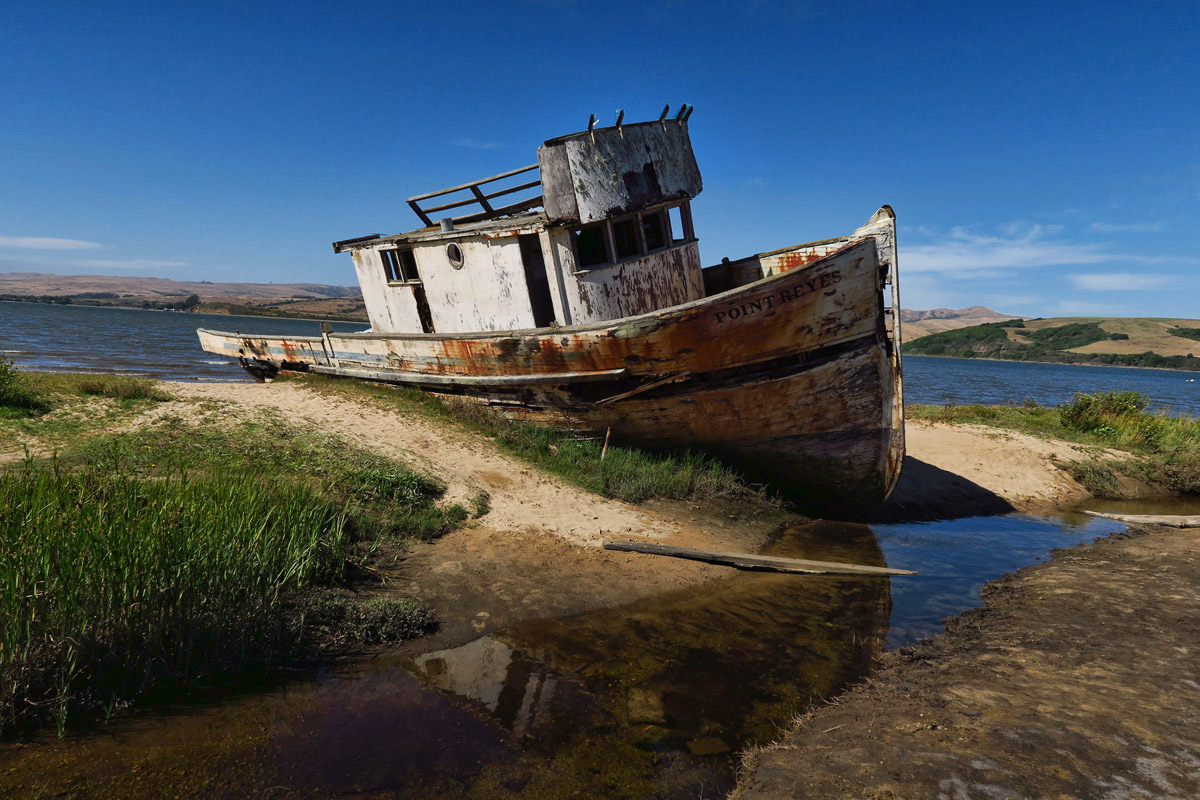 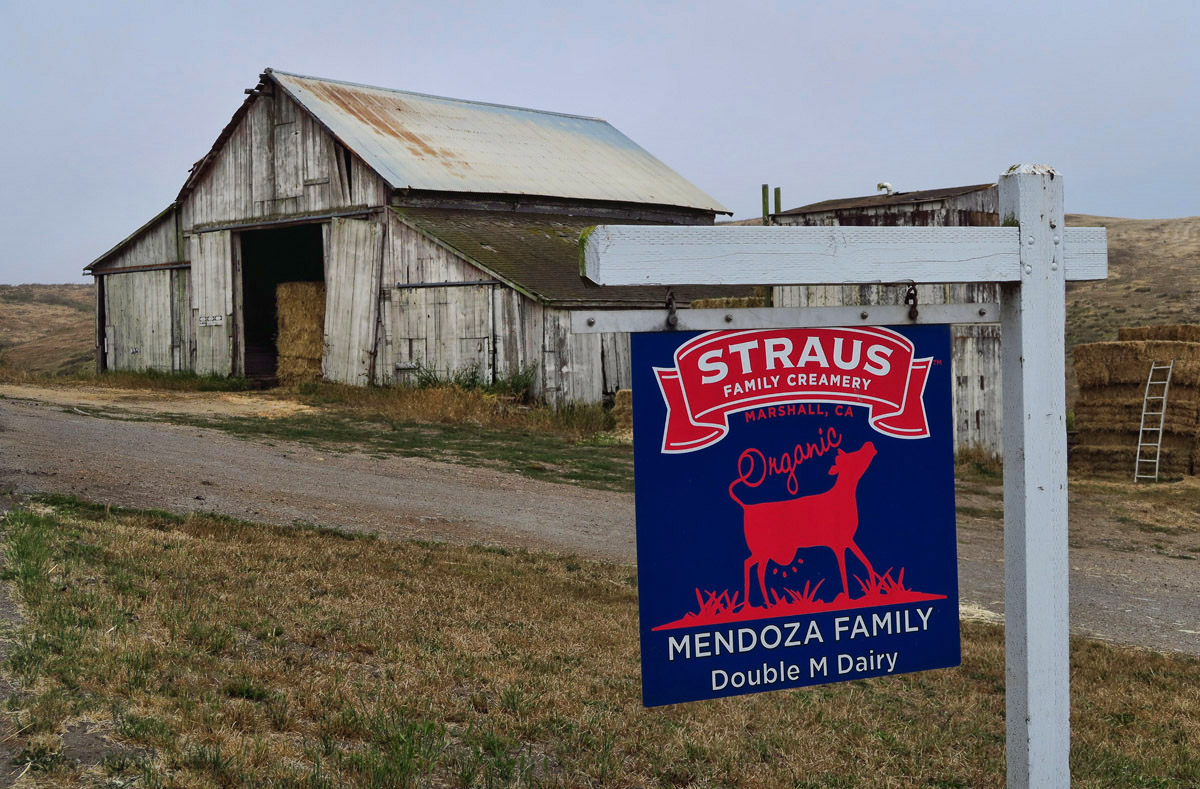 Although it’s only 20 miles from Olema Campground to the Point Reyes Lighthouse, the park brochure says to “allow an hour.” The road is extremely curvy, narrow, and traverses over some rough stretches worn down by the many herds of dairy cattle crossing the road. 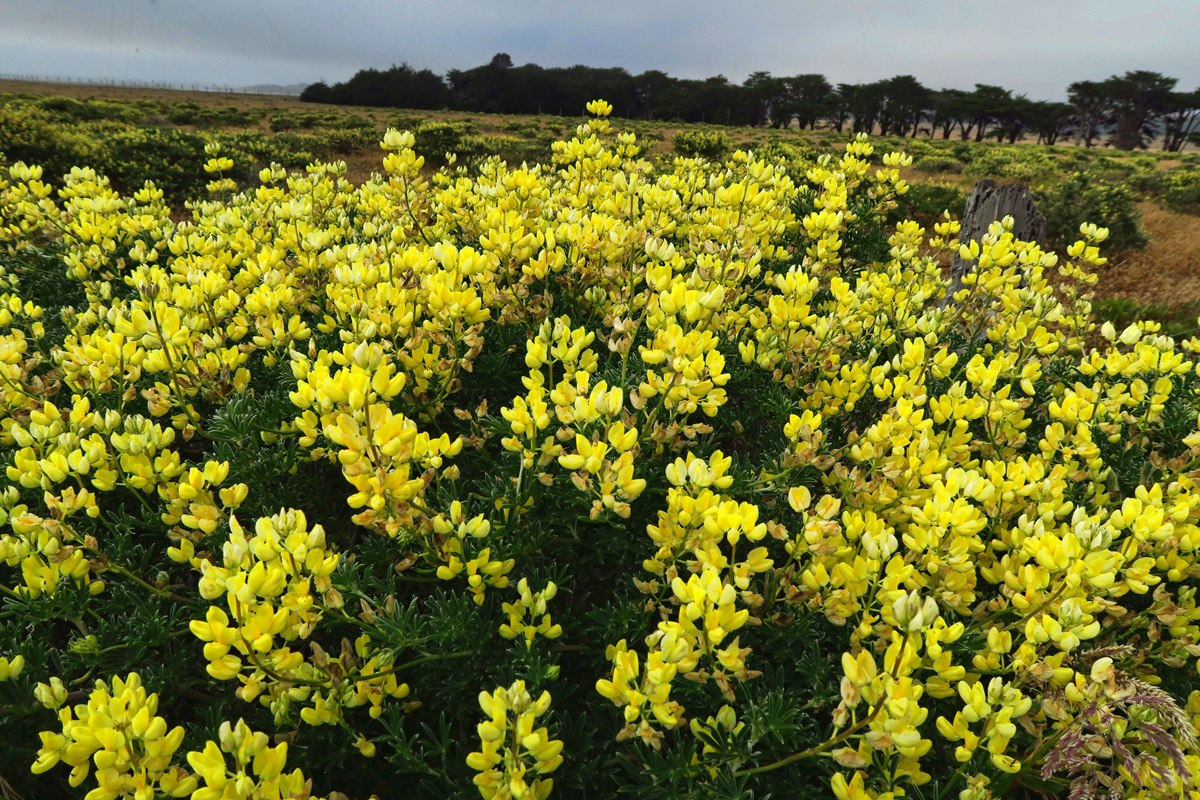 There are fields of this Coastal Lupine growing all over the hills. 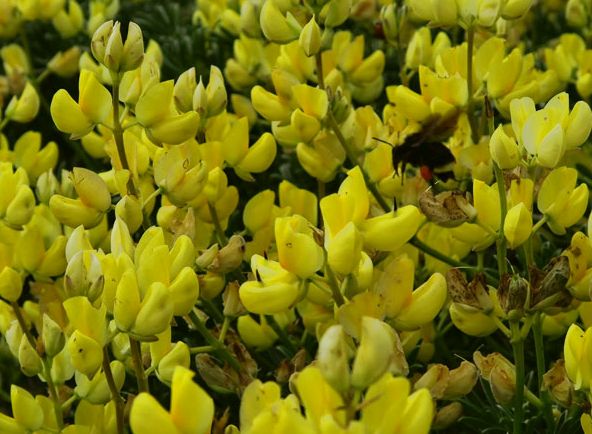 The fragrance is faint, but sweet if you can get close without sniffing a bee!

It’s a lovely drive until I crest a hill about three quarters of the way there and I am met with a gust which just about blows the Little Tracker backwards. Then comes the fog. Rolling, billowing fog, blowing across the road like a Sahara sandstorm. By the time I reach the turnoff for the lighthouse, I can barely see the road, and the field grasses and coastal lupine are bent at a 90 degree angle. I’ve gone from summer to winter in just a few short miles. 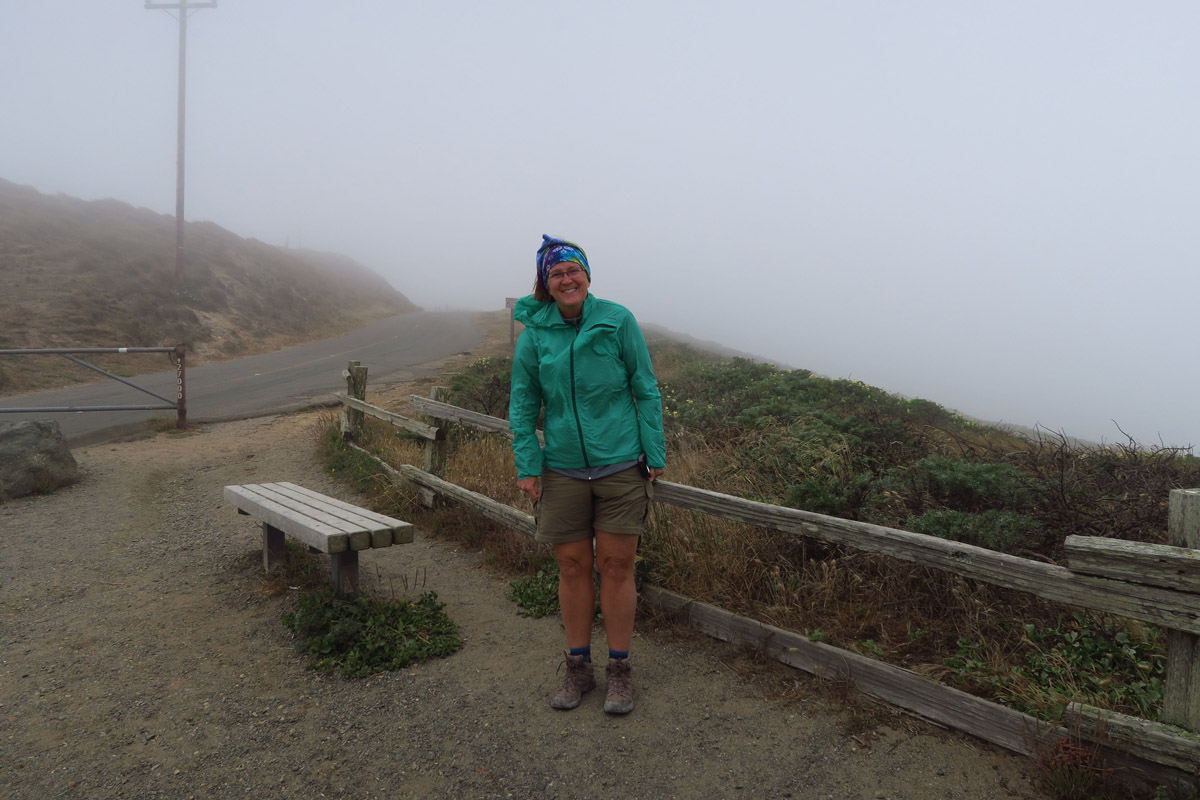 Trust me, it’s much worse than it looks! 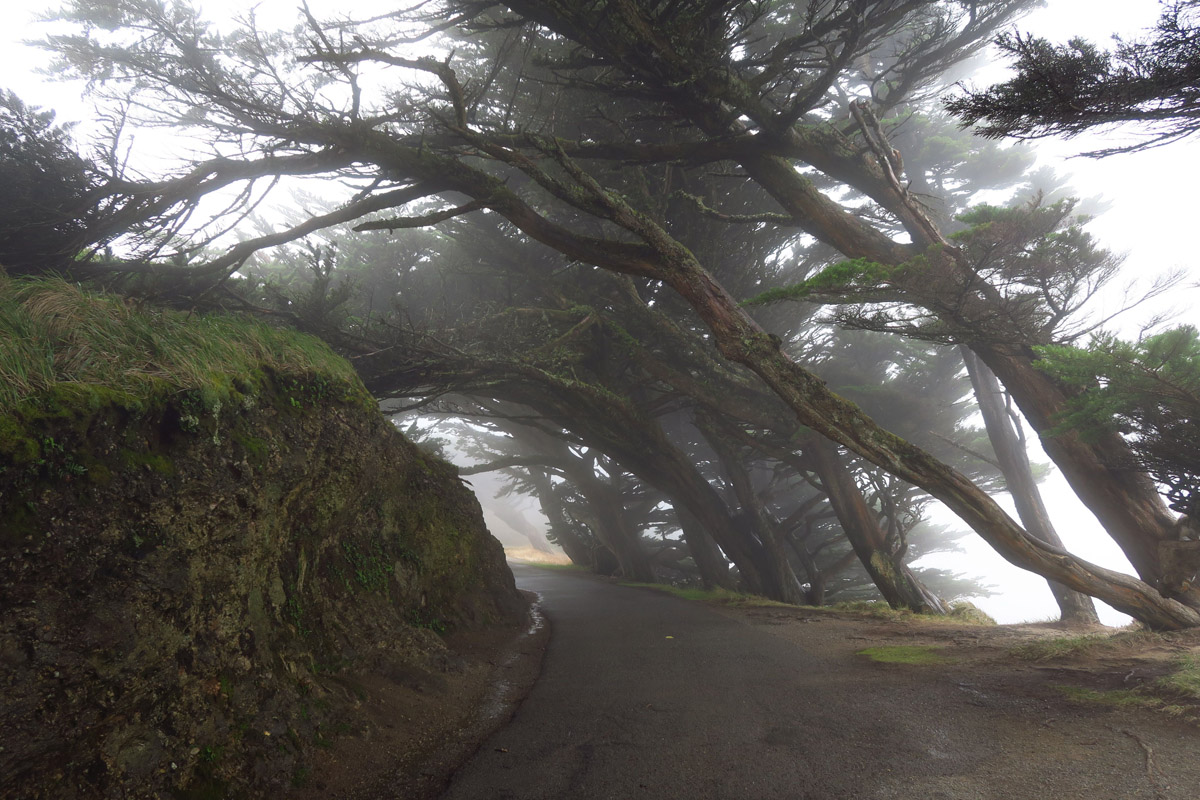 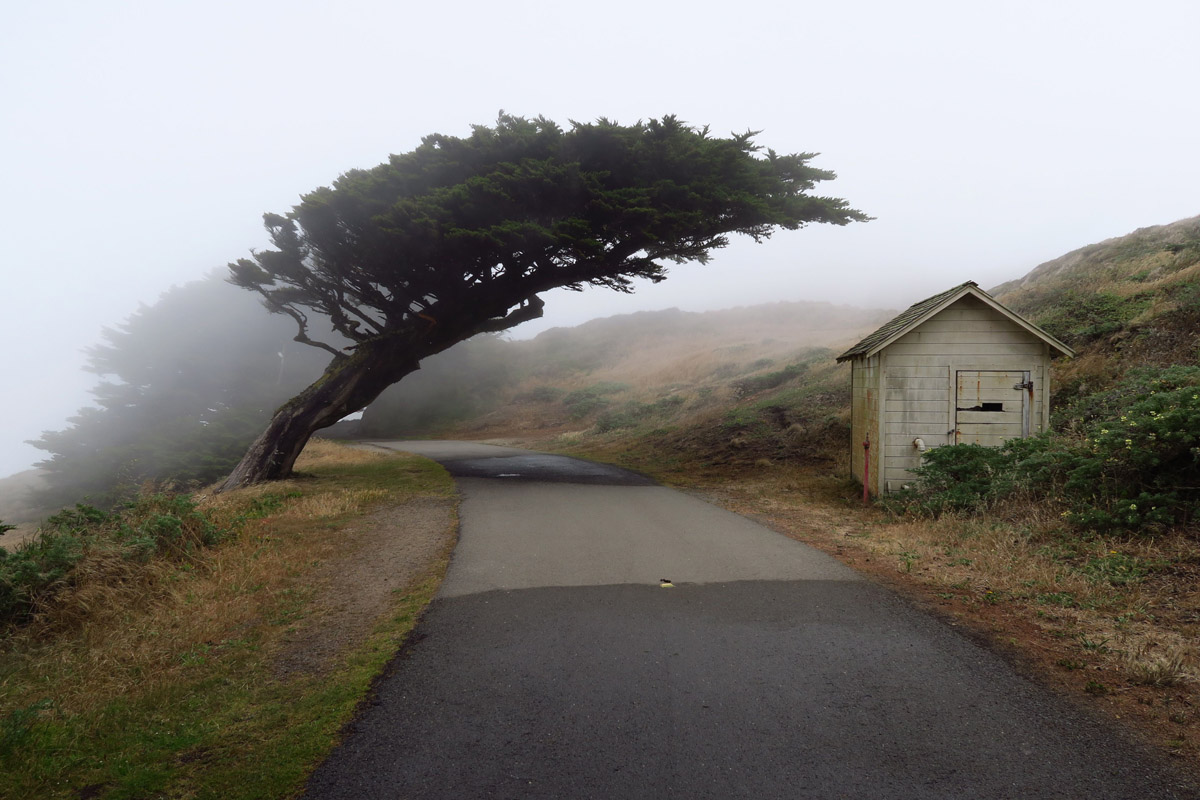 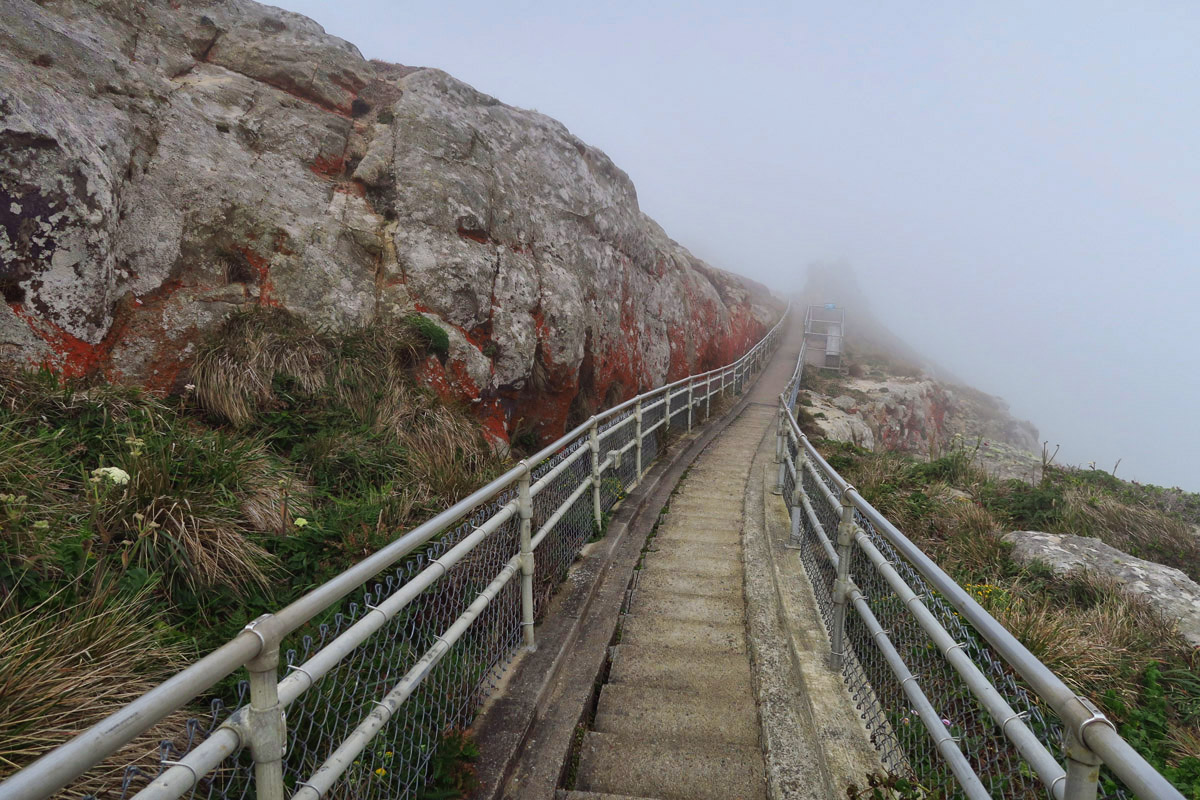 The 300 stairs leading down to the lighthouse. Some kind of red lichen or algae is growing all over these rocks.

It is still a half mile walk from the lighthouse parking lot to the stairs above the lighthouse. It is FREEZING, and I am wearing shorts! I wrap a bandana around my head to try to stay warm and keep my hair from whipping me in the face. I look around the Tracker to see if by some miracle there is something in there I can use for cover…a plastic table cloth and a life jacket. I have a chuckle thinking perhaps the life vest would be the better choice in case I blow off the stairs! 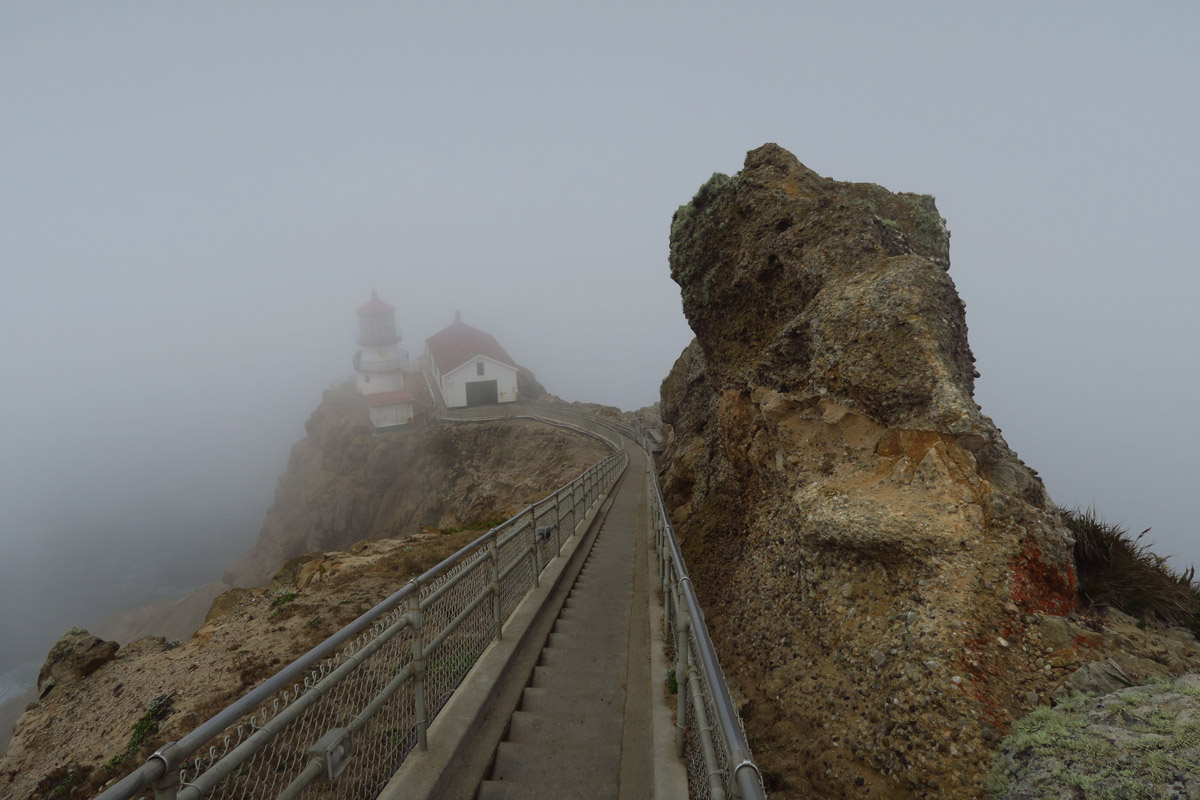 My first glimpse. Ain’t she a beaute? 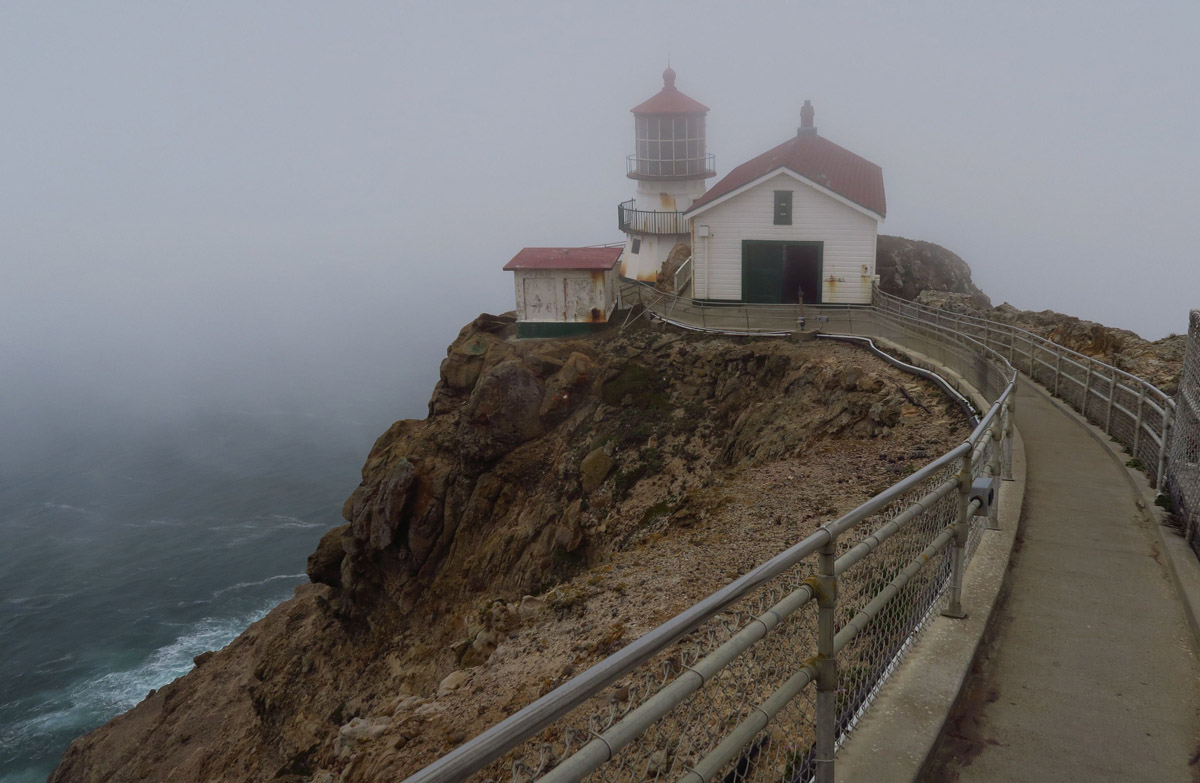 The smell of the salty sea air is intoxicating! 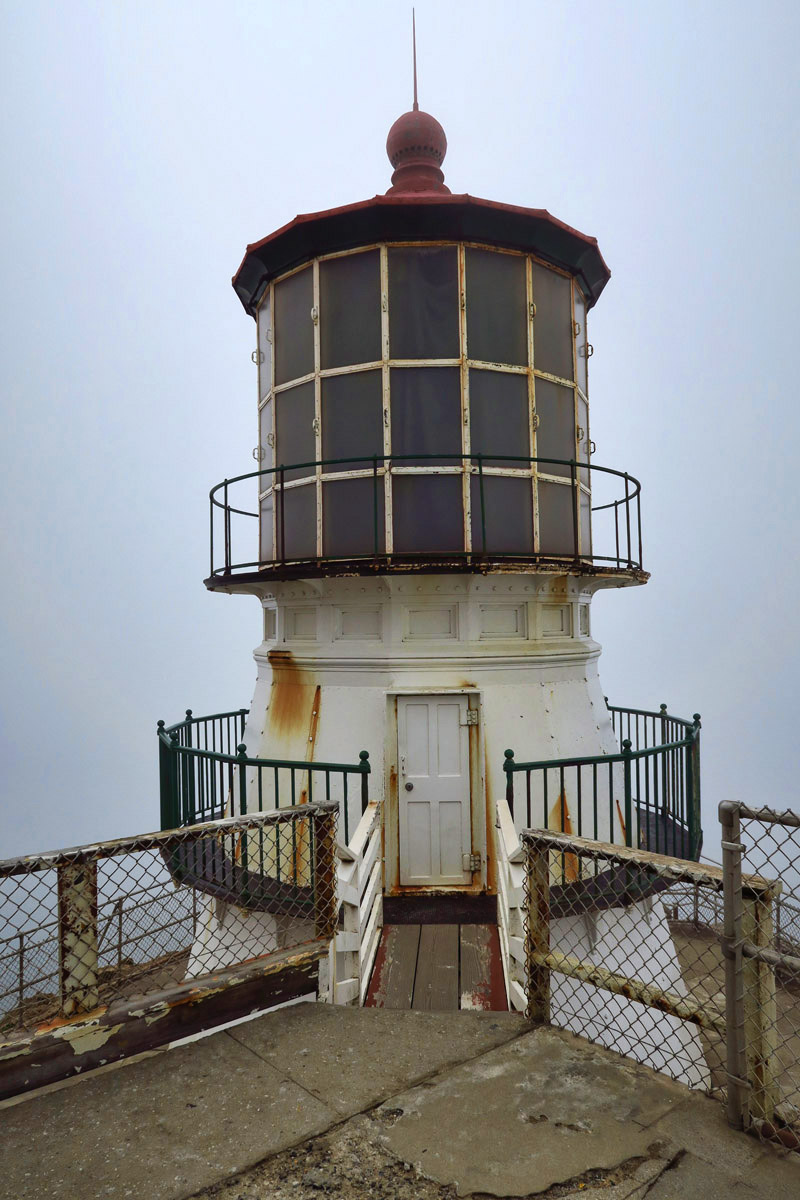 Showing a bit of rust on her iron tower, but it only adds to her character.

As I am walking the half mile from the parking lot, I meet a man coming in the opposite direction, so I ask, “Are the stairs still open?” He says “Yes, but the Ranger just clocked the wind at 39mph, and they close the stairs when it reaches 40. So you’d better hurry!” I take off as fast as I can walk, hoping to also warm up as I go.

I reach the top of the long winding staircase that leads down to the lighthouse, positioned at the bottom of the cliff to be visible below the fog layer. There is not another person in sight, so I take off down the stairs quickly before they have a chance to turn me back. 😉 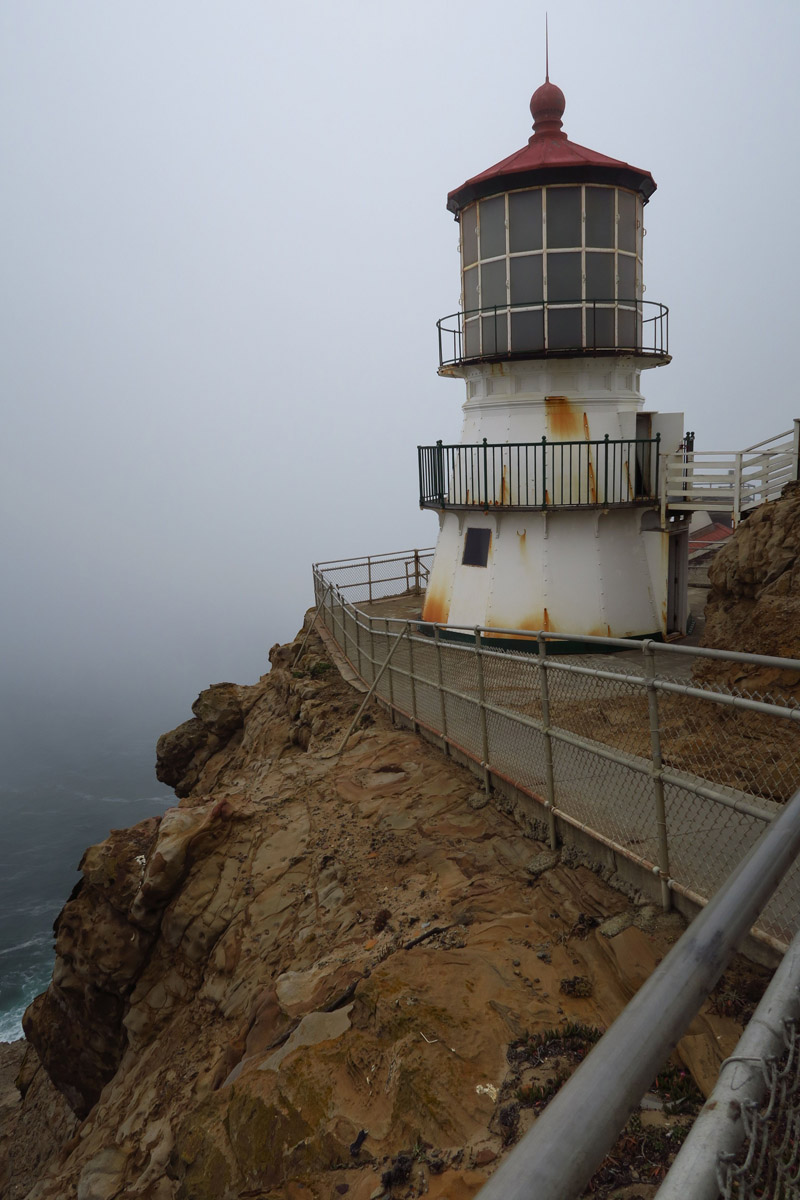 I wouldn’t want the job of painting on the cliff of the windiest point in the USA. 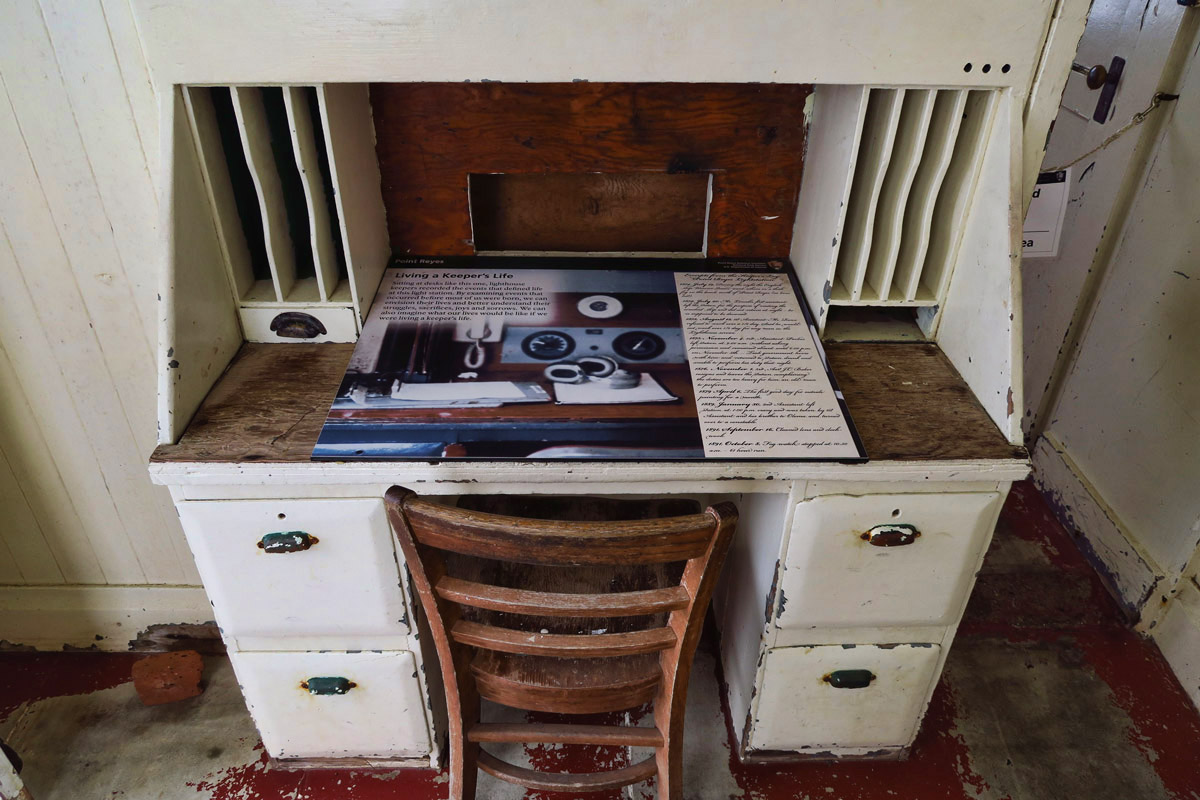 Inside, the original light keepers desk contains passages from the log telling tales of alcoholism and mental illness due to near intolerable conditions. Understandable if you could hear the screaming wind!

The aroma of the salty sea permeates the air making me want to inhale, though the biting, brutal wind makes it difficult. I take shelter in the equipment room, all alone as I stand at the antique desk while listening to the wind screaming through the 140 year old paned windows. I read entries from the 1875 log telling accounts of light keepers gone mad, “Oh, solitude, where are the charms that sages have such in thy face? Better to dwell in the midst of alarms than reign in this horrible place.” ~September 21, 1885. It’s cold, it’s bleak and it’s damp, and I think “if I can’t be here on a sunny day, then I am glad it is in the worst of theatrical conditions!” The sound effects of the wind. The visuals of the rolling fog. It’s a wild and wonderful place! 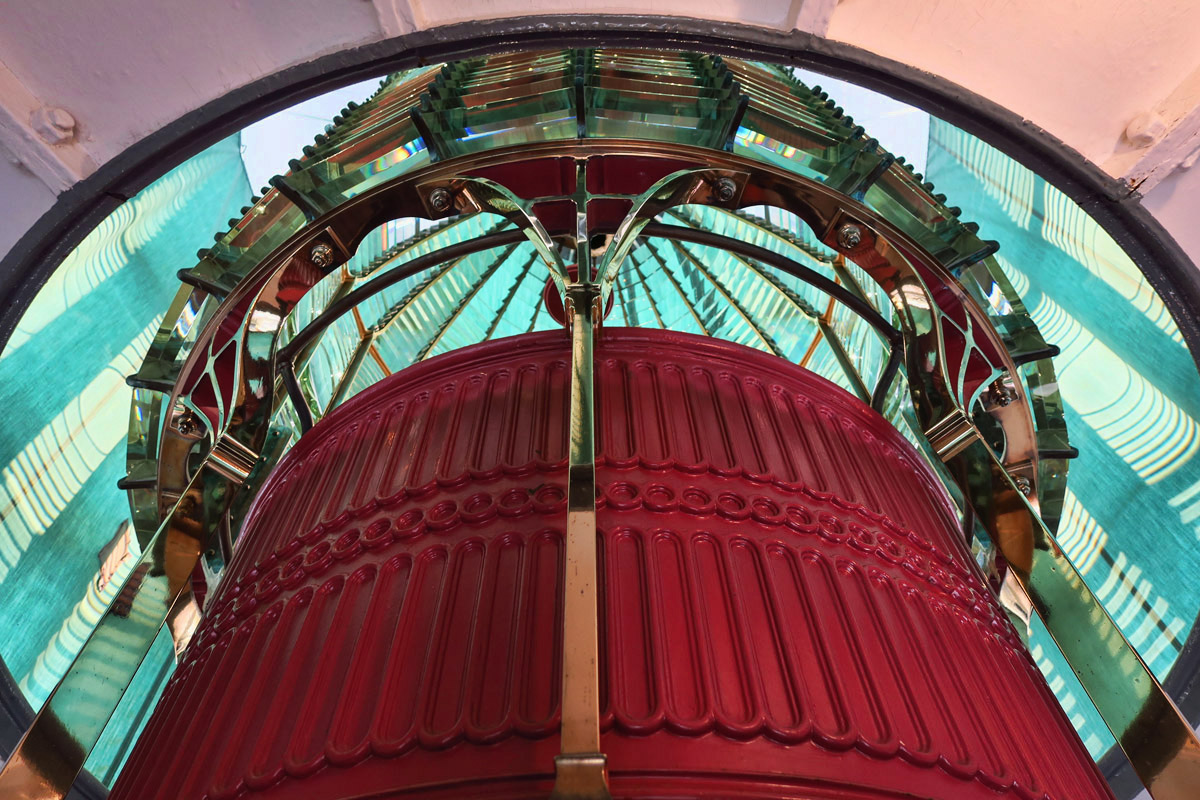 In spite of the conditions outside, inside the lens room, the 6,000 Fresnel lens is in phenomenal shape! 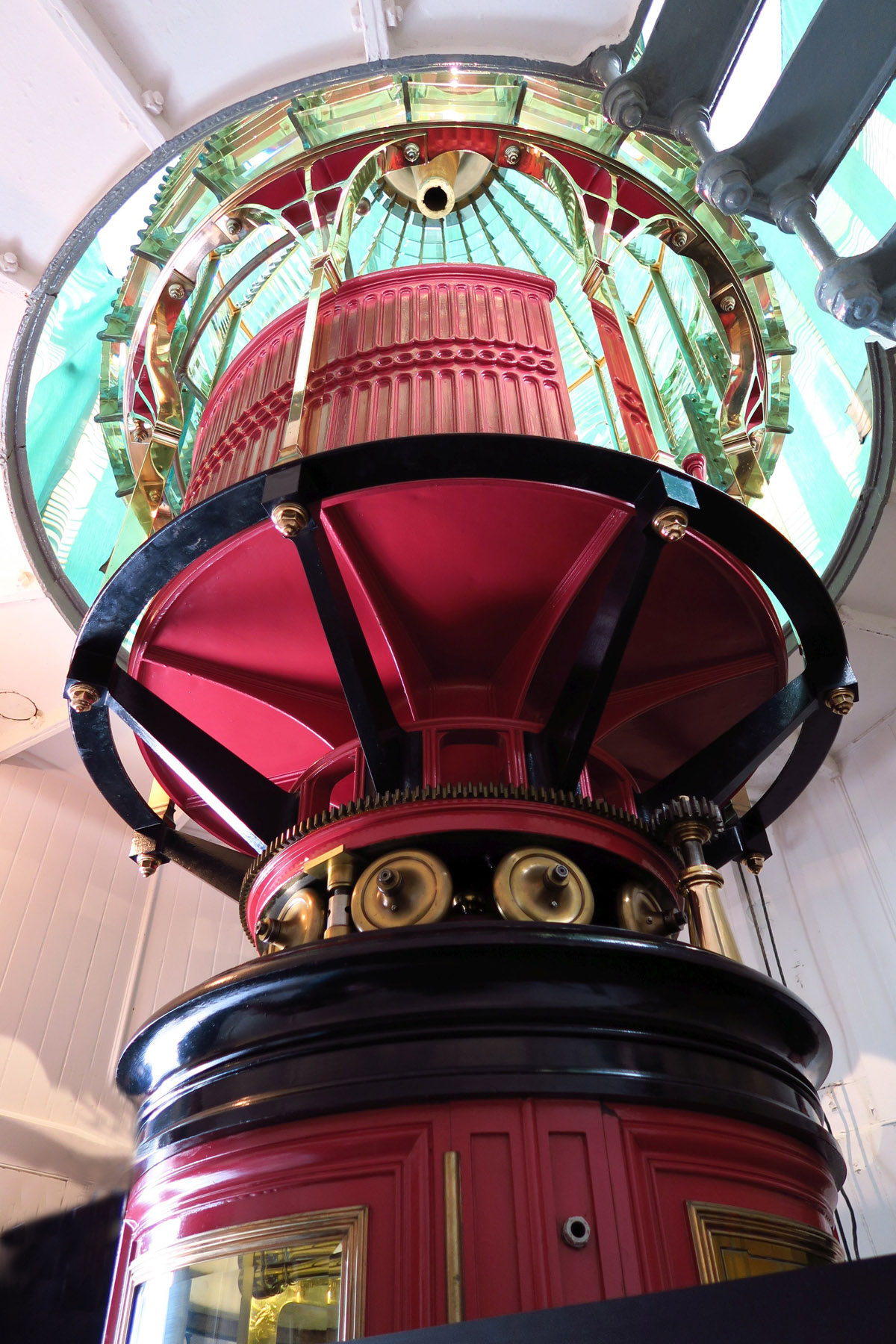 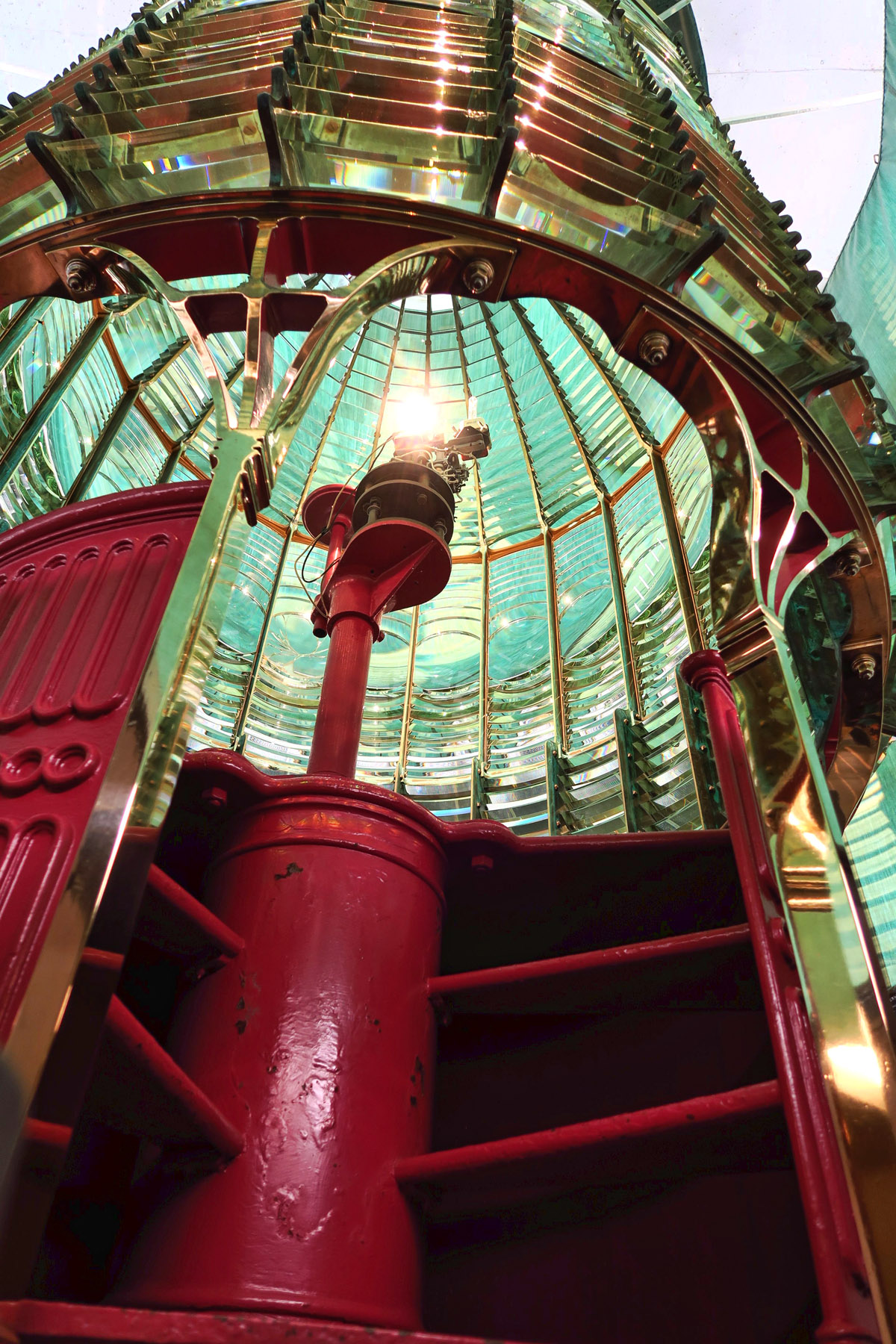 Counterweight clockwork rotated the lens to give a one-second flash every five seconds that could be seen for 24 nautical miles.

Made of iron and literally bolted to the cliff, this war horse of a lighthouse has withstood winds up to 133 mph. I step outside to brave the wind and photograph the light structure with a death grip on my camera, when a Ranger steps out from behind and scares me as if I had seen a ghost. I thought I was all alone. The lens room doesn’t open for another 4 hours, so I didn’t expect to see her there. 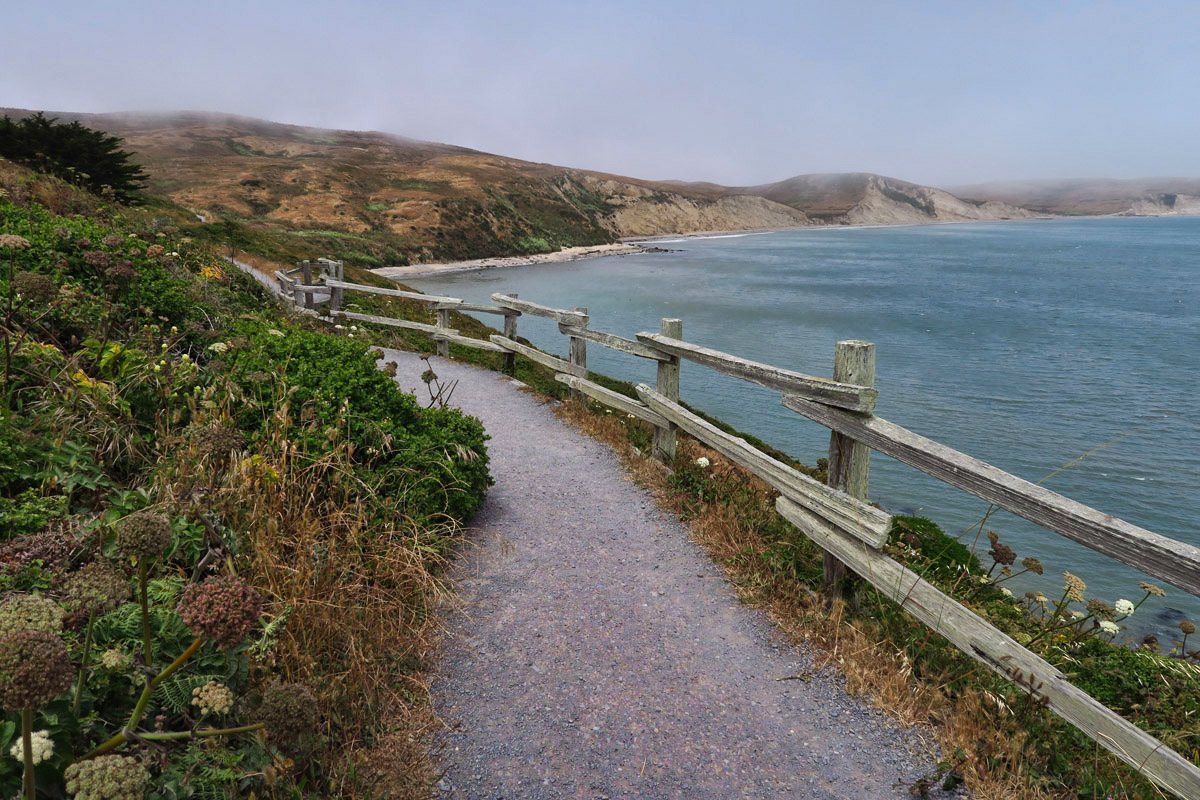 Point Reyes Lighthouse sits at the tip of a “spit” that looks like an upside down “T.” At the opposite end is Chimney Rock hike and Elephant Seal viewing area. 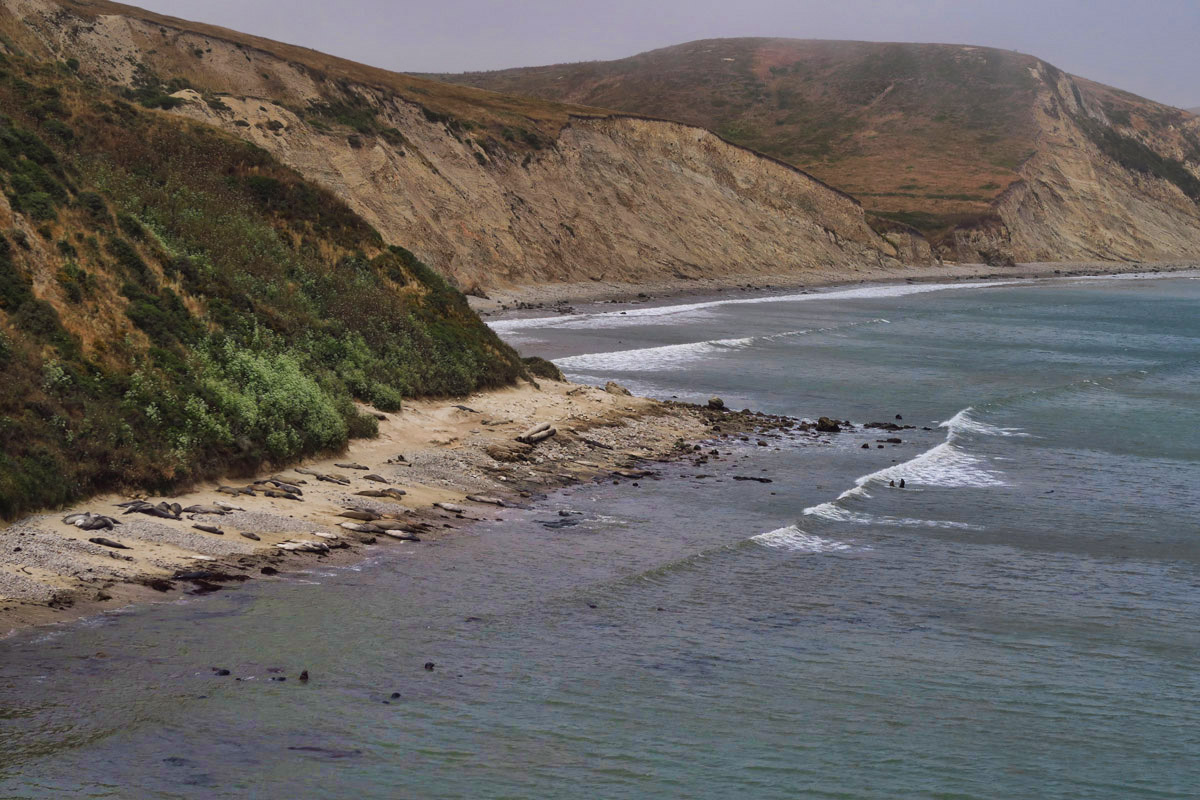 What looks like logs on the beach is actually elephant seals. 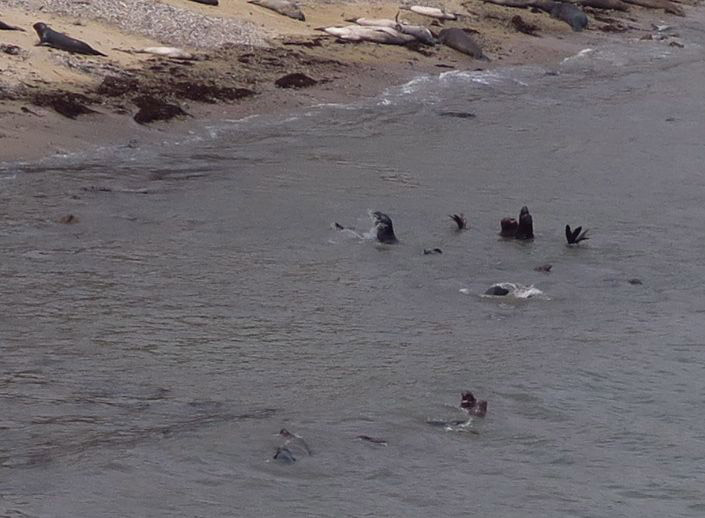 You can hear them “barking” long before you can see them. There are many out cavorting in the water.

Since we are the only two on the grounds, she unlocks the door and lets me get a glimpse of the First Order Fresnel Lens. Sometimes, they are merely spectacular, and then there are times when they are downright enchanting. I am certain I gasped as she opened the door. Fillirg the entire doorway were 1,032 sections of hand cut crystal held together in the shape of a beehive by gleaming mirror-like brass. The clockworks were in Bristol condition, as was the fire-engine red pedestal and shiny brass nameplate showing date and location of manufacture, “Paris, 1867.” Although the light was replaced in 1975 by an automated beacon, I love that they left this 6,000 lb Fresnel, a work of art, in its original position rather than relocate it to a museum as some lighthouses have done. 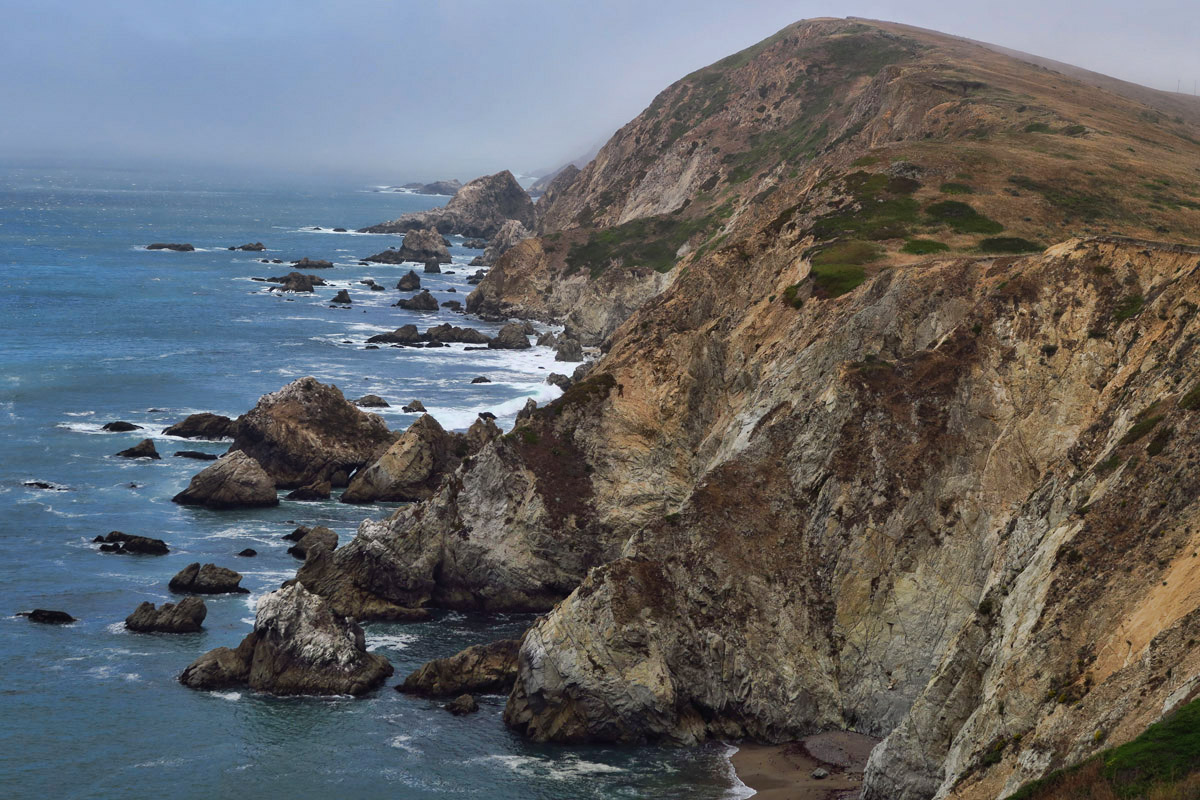 It’s a gorgeous ridge-line hike out to Chimney Rock. 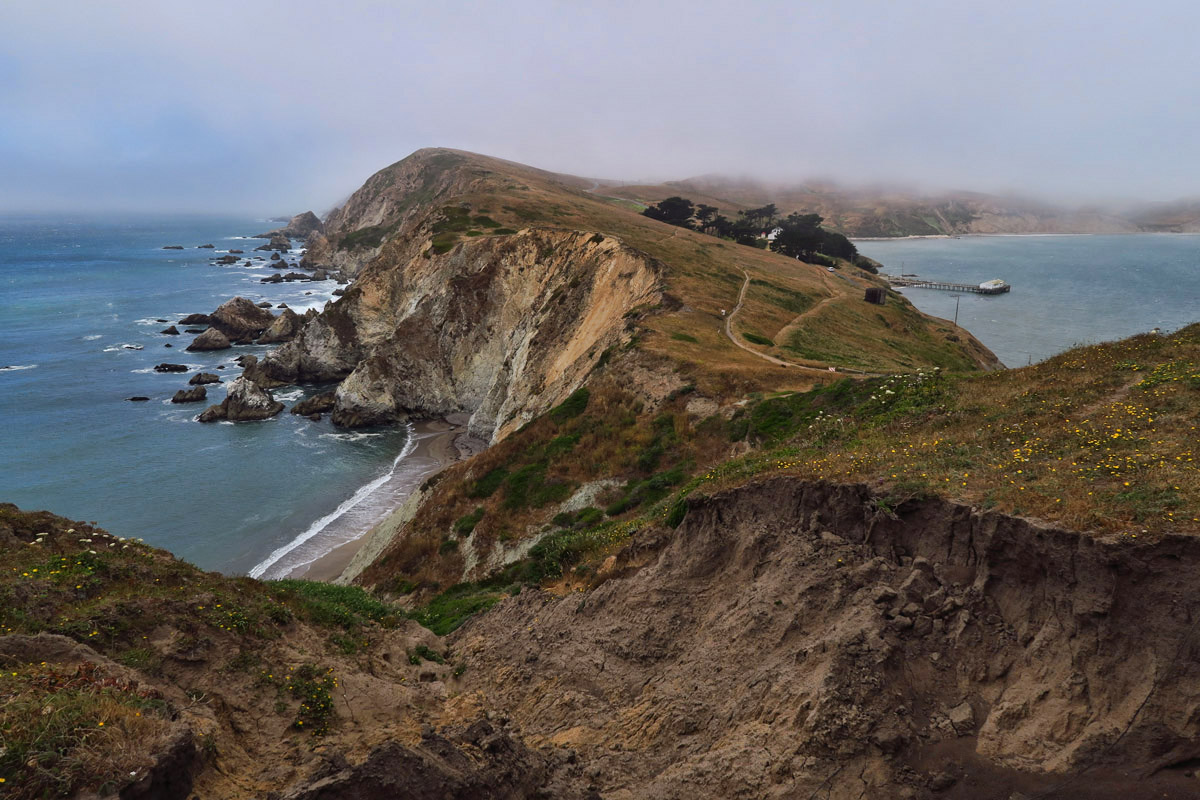 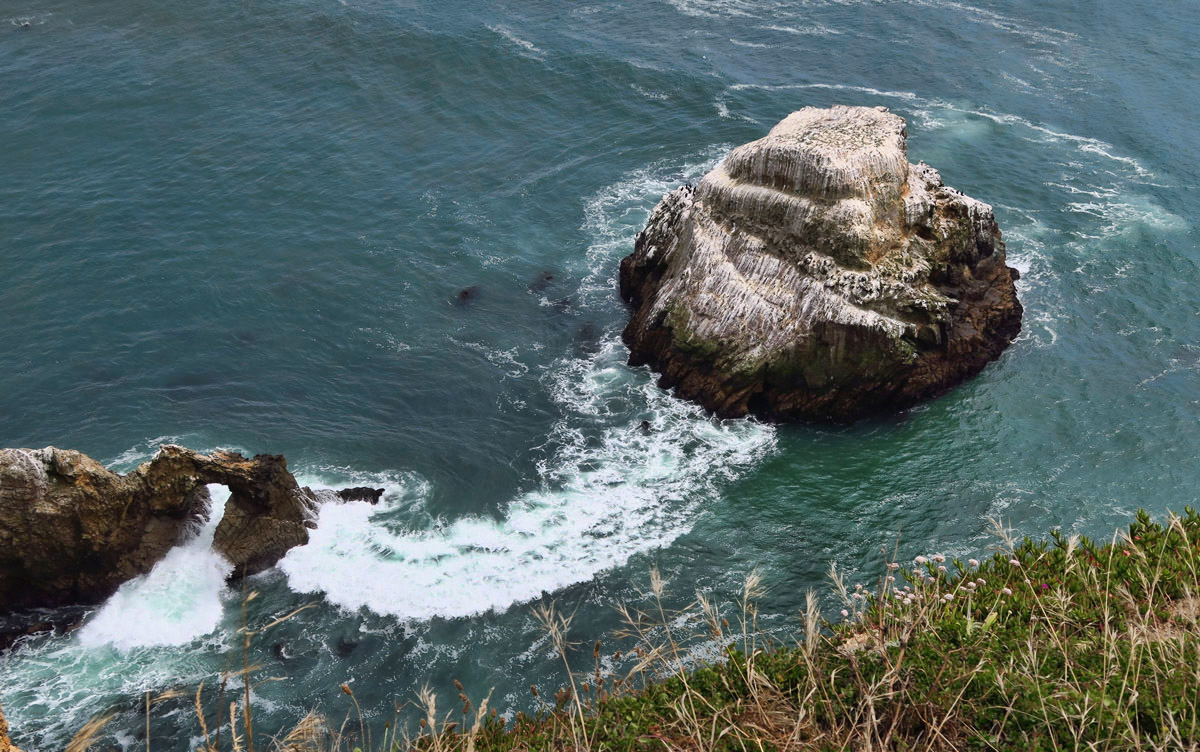 The “stack” on the right is the namesake for the hike. 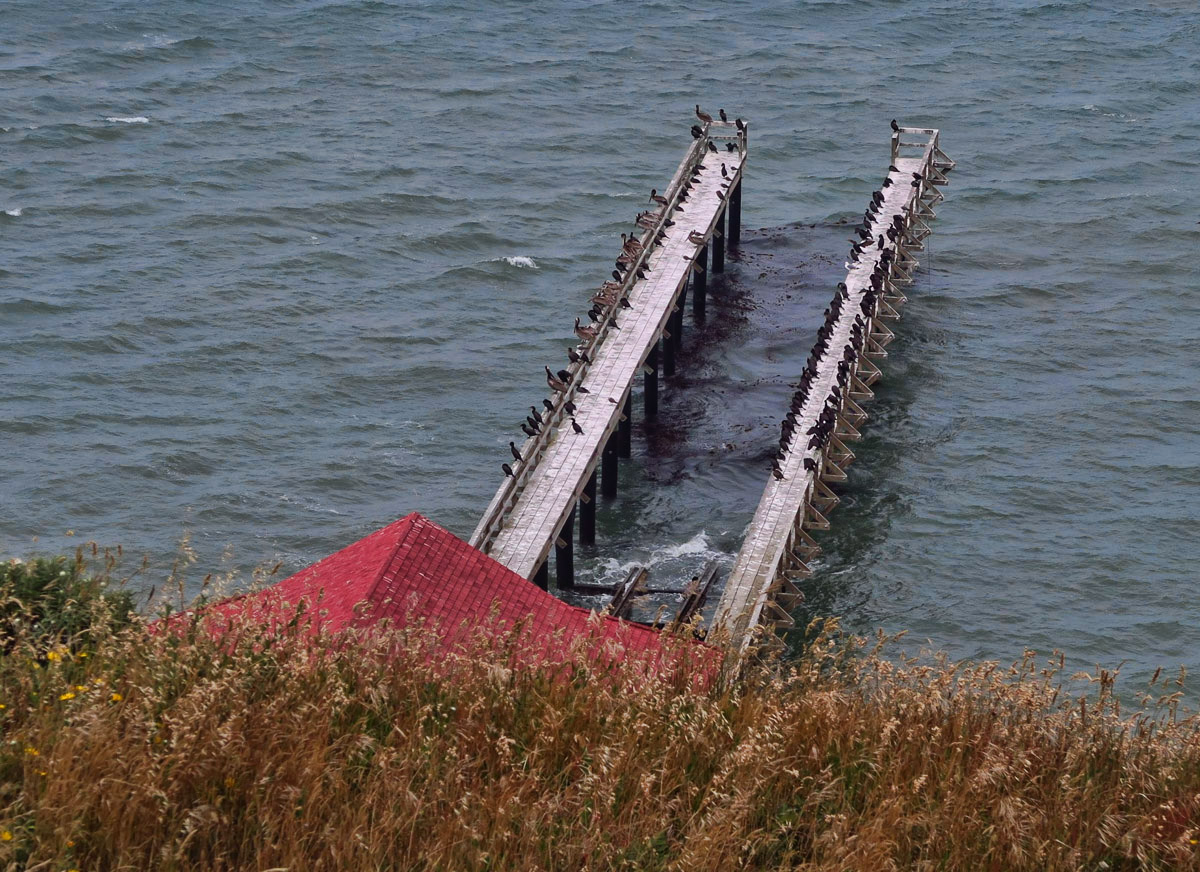 These docks are serving as cormorant runways.

After the blustery climb back up the 300 stairs and half mile walk back to the Tracker, I head to the Chimney Rock trail and elephant seal viewing area. However, my plans for a picnic are still laughable, as the cold wind and fog prevail. But where better to enjoy my “ploughman’s lunch” than from the drivers seat of my black and white car camouflaged amidst the dairy farms dotted with black and white cows! 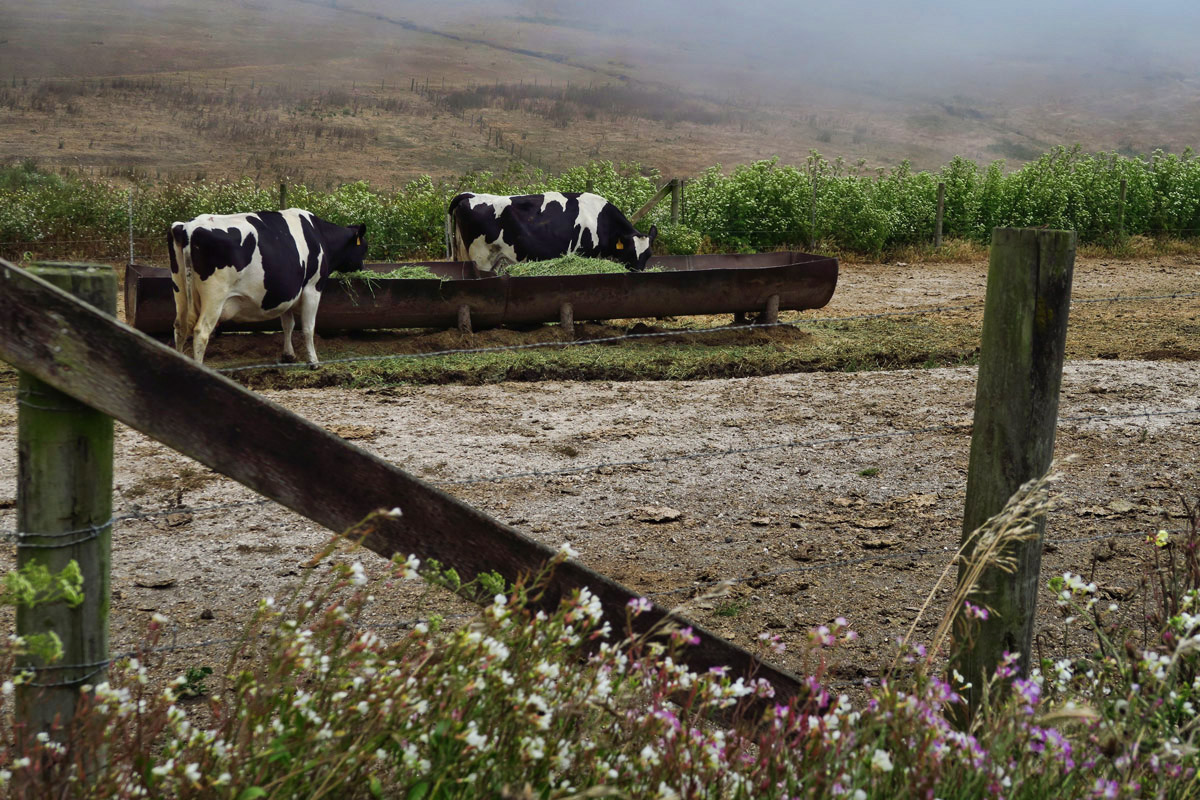 The hills are alive with the smell of dairy cows. 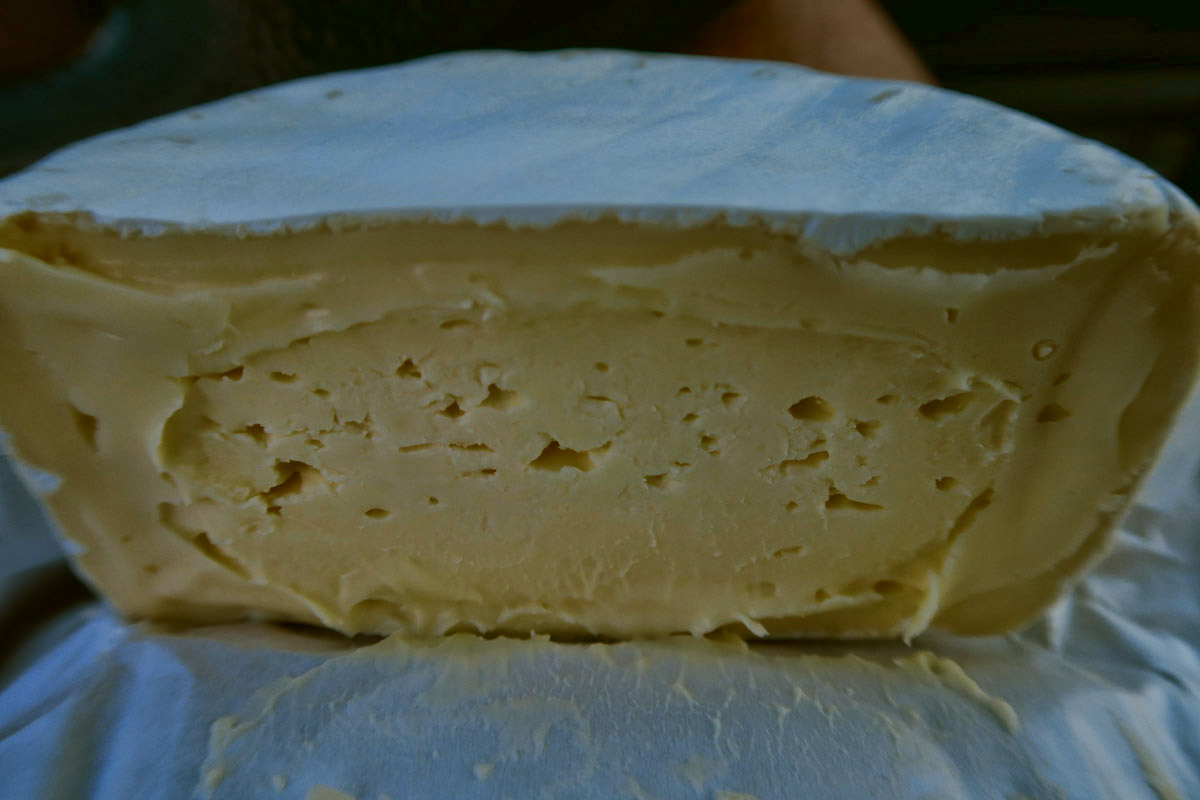 This “Mt Tam” cheese from Cowgirl Creamery is heavenly! 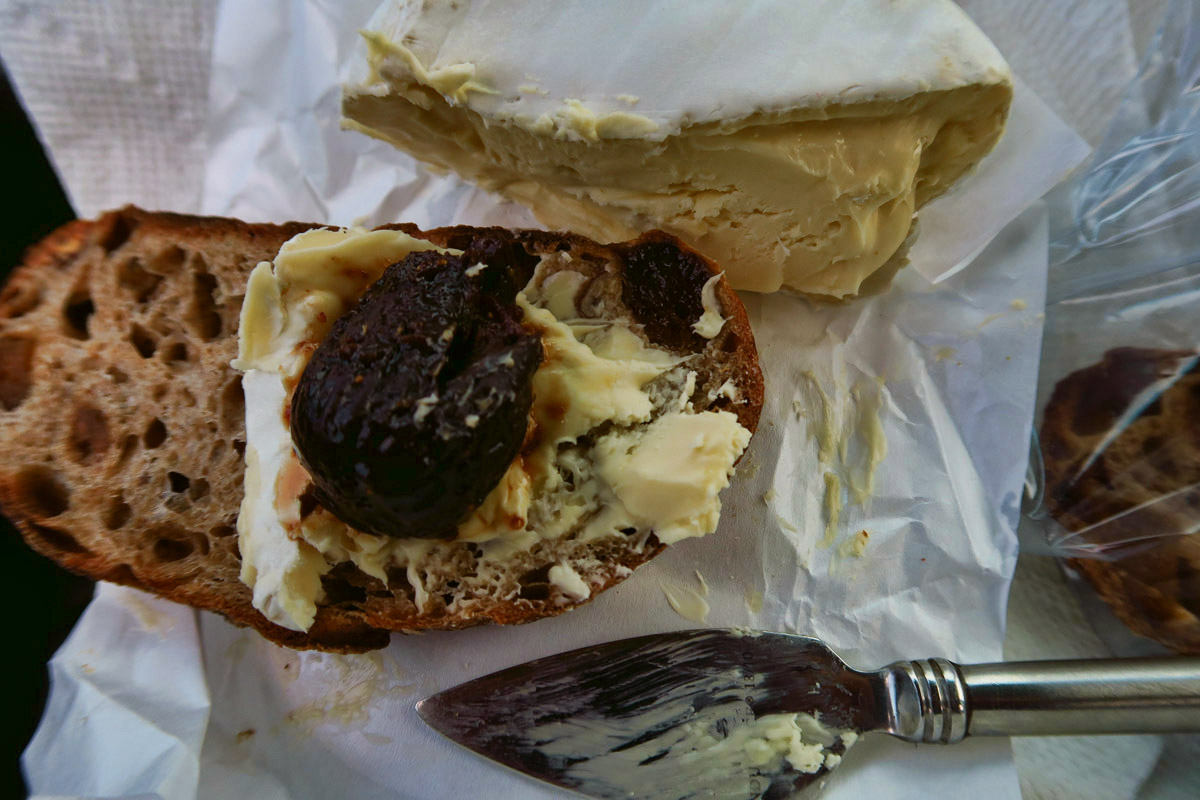 Especially on crusty bread with a port-soaked fig on top! 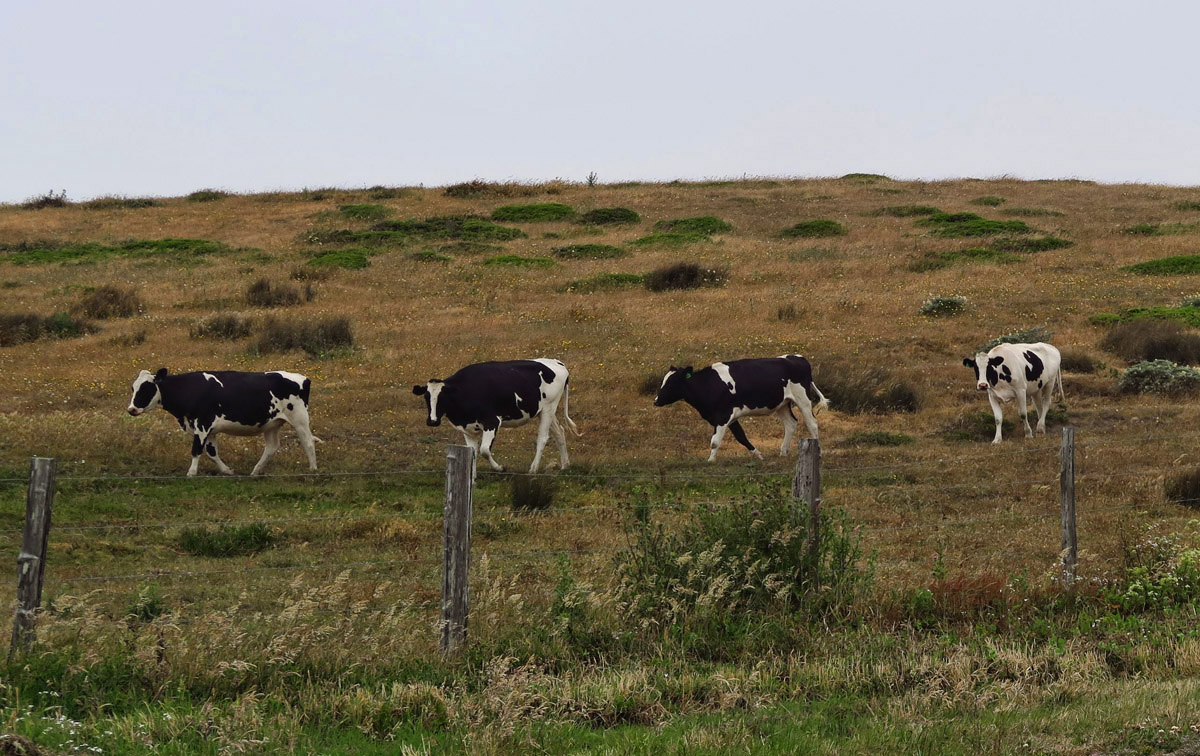 I could sit here….till the cows come home.

23 thoughts on “Getting to the Point”