I arrive at the Olema Campground on the outskirts of Point Reyes National Seashore, just 40 miles north of San Francisco on the same day as my new Canon G7X camera arrives via FedEx from Canon Service Repair. It’s an eagerly anticipated arrival! I have been without a decent camera for five weeks now. Oh, sure, I had the trustworthy little $99 Canon ELPHie, but the zoom is broken, the LED screen is crushed, and half the time it returns a “lens error,” forcing me to shut it off and back on again. 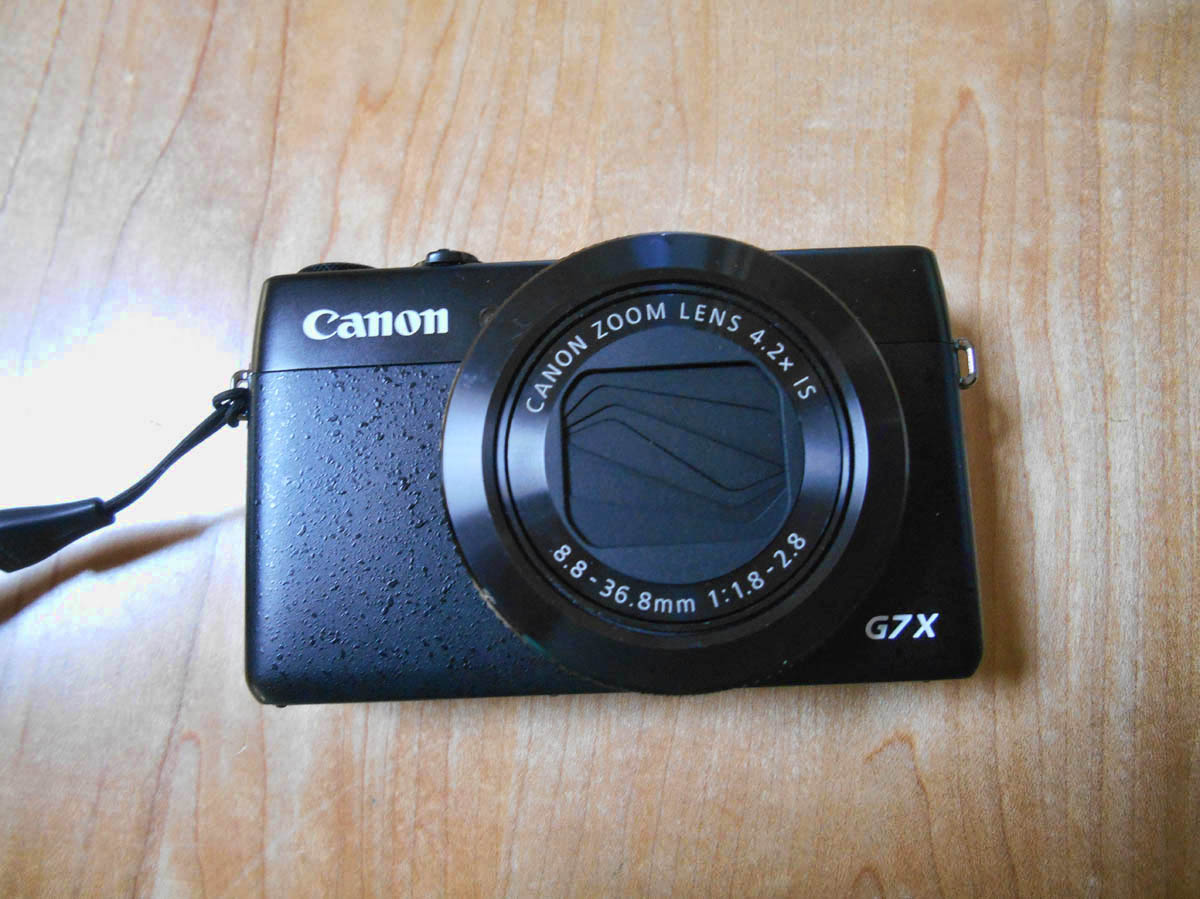 At long last, after five weeks, it has arrived! 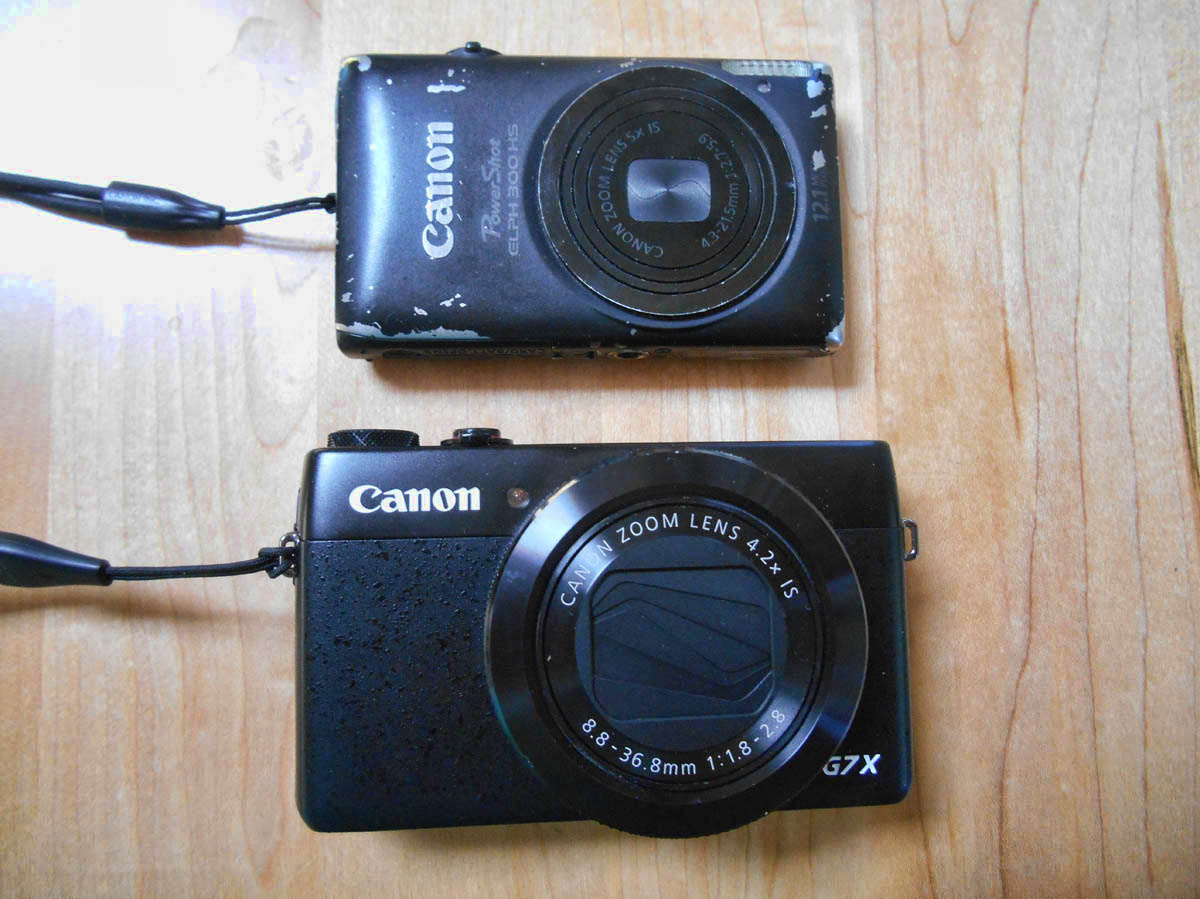 Comparing the new G7X to Canon ELPHie. Not as sleek or stealth, but certainly more robust. 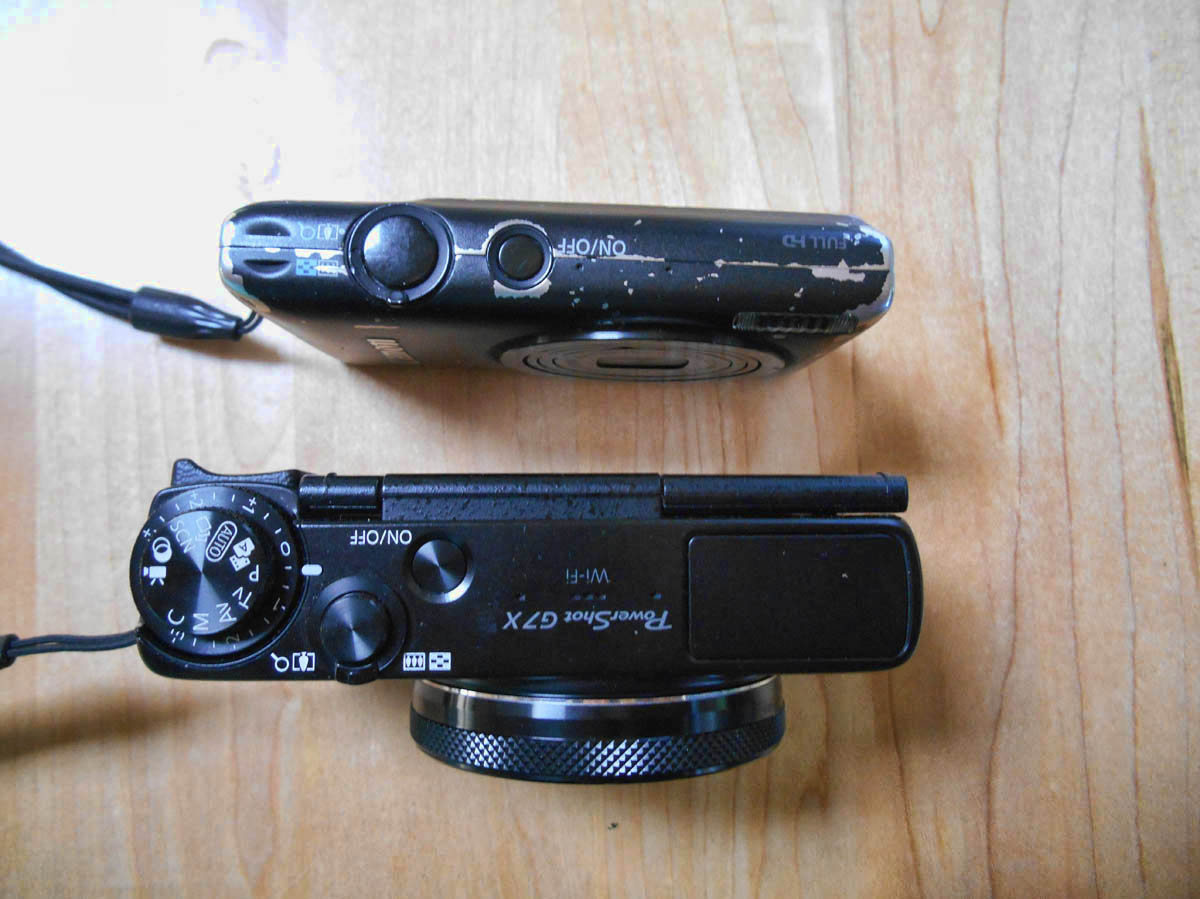 Notice an extra quarter inch in width is due to the “flip screen,” a feature I would gladly sacrifice for a slimmer profile.

My camera of choice, my Canon S110 died a violent death at the end of April, the day I was to visit the Mission of San Juan Capistrano. It continually displayed the “Charge battery” error no matter which battery or how long it had been on the charger. I sent it in to Canon Repair the first week of May, at which time they estimated the repair to take “7 to 10 days.” Now two years old, the camera was no longer in warranty, so the repair estimate would be $173. Since the S110 is no longer available, I decided to pay the cost of repair. 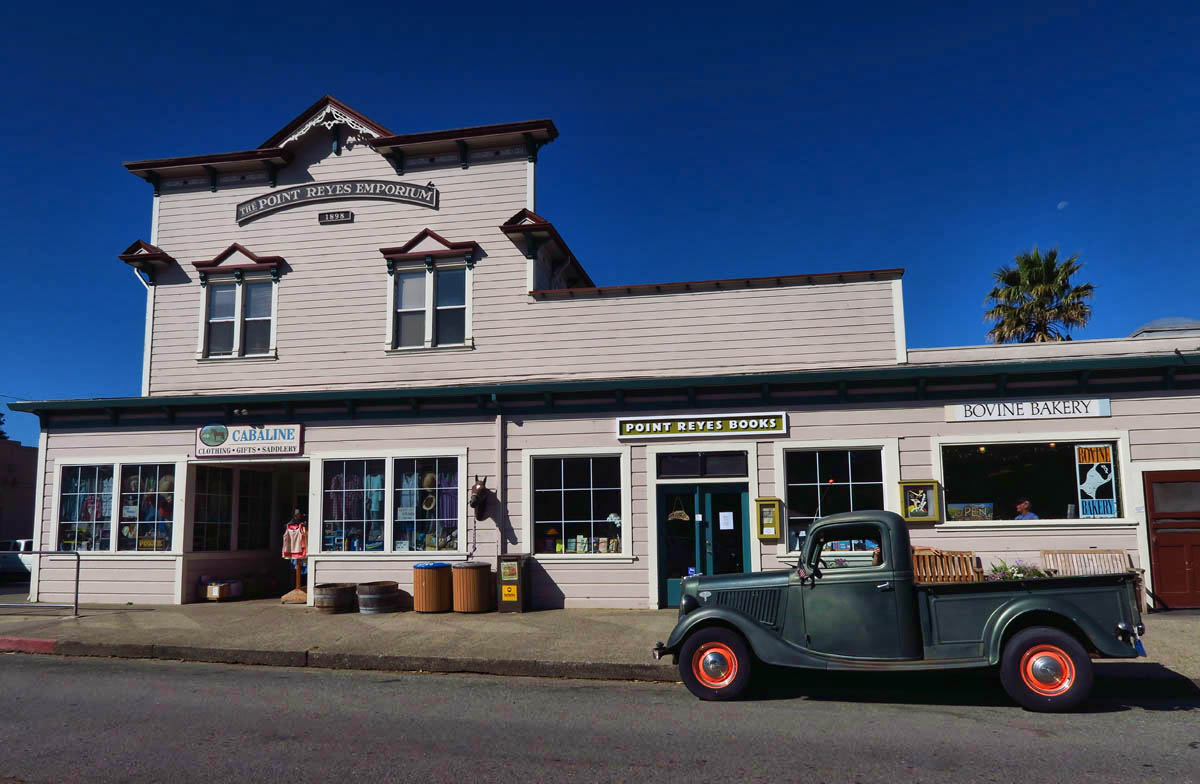 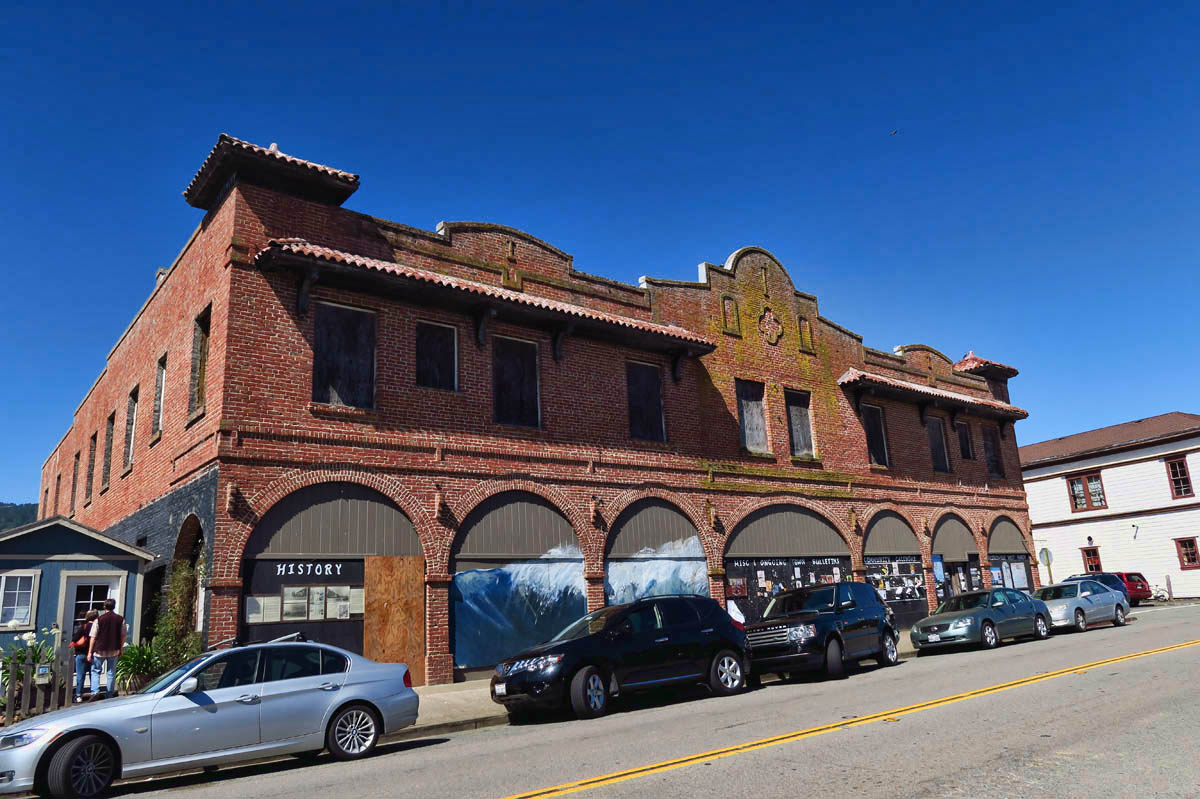 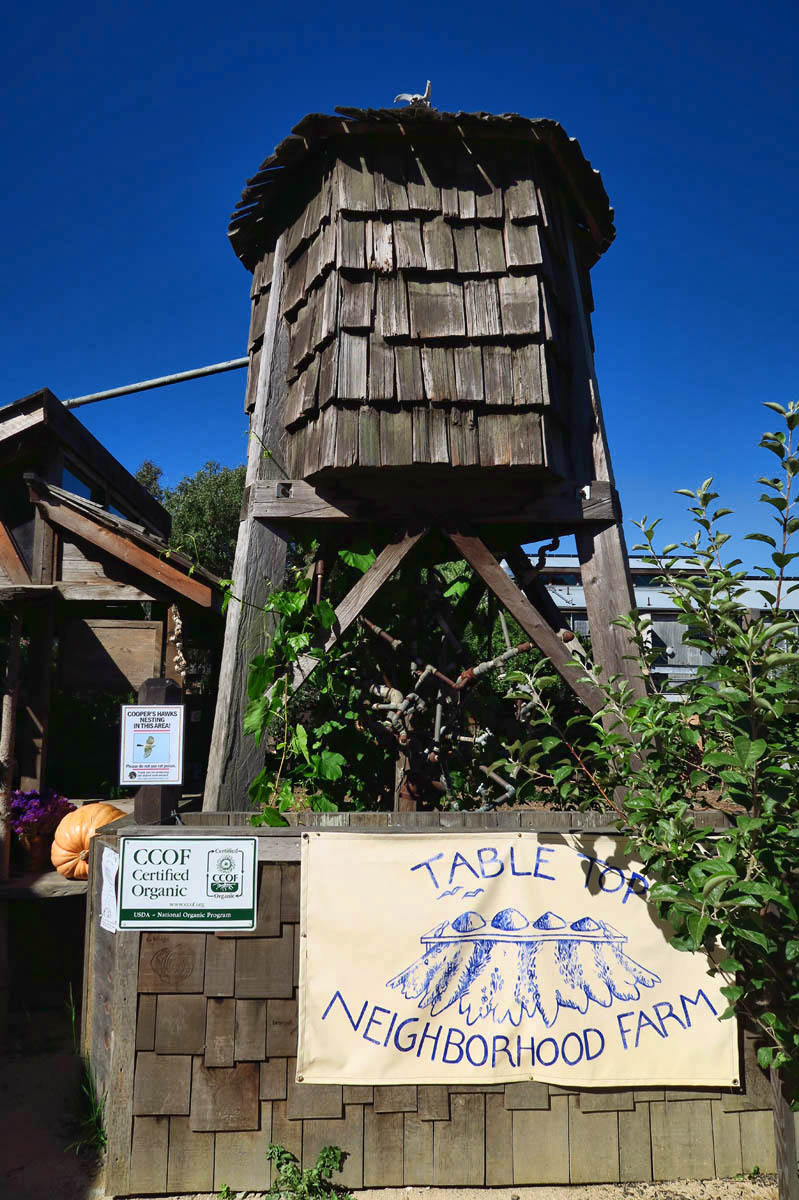 It’s harder to find anything “non-organic” in Point Reyes than it is to find organically grown. 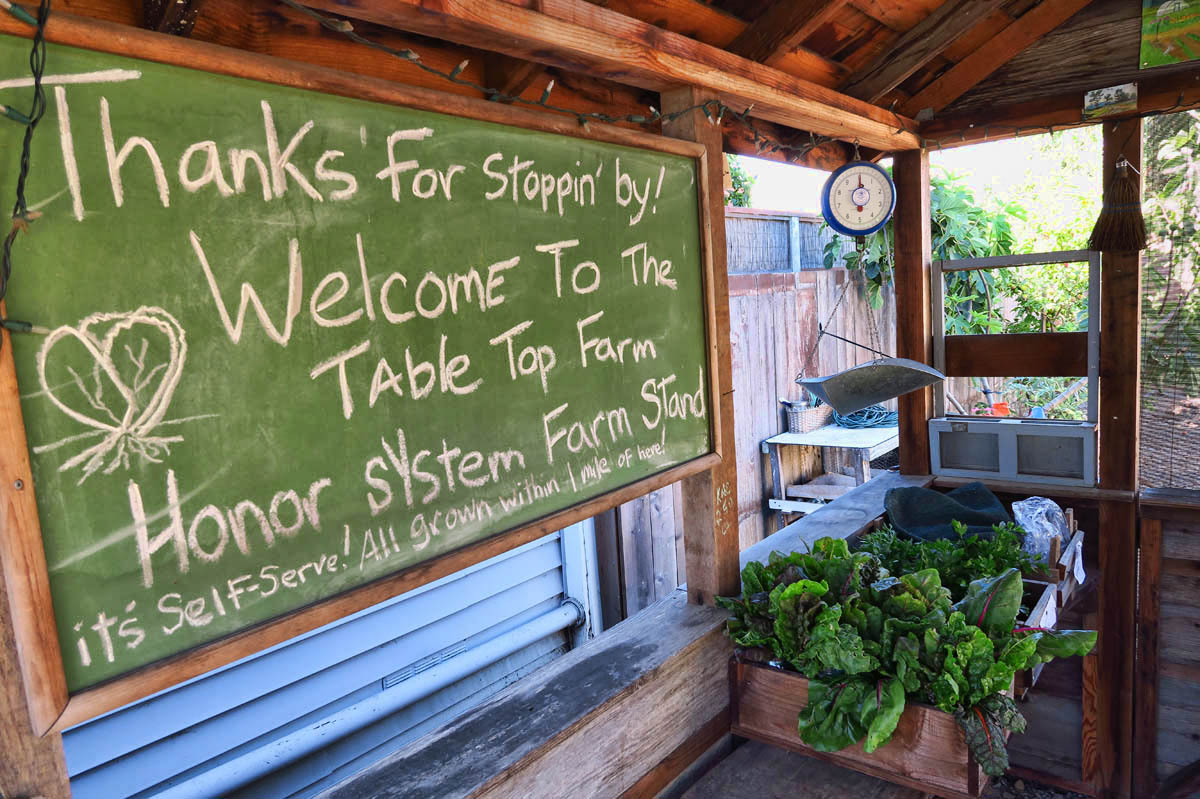 There is a huge push toward “locally grown” in Point Reyes Station.

Mid-May, I get a call from Canon saying they cannot repair the camera, so they are offering me the G7X as a replacement. After a good bit of research, I realize there is nothing as lightweight and compact as the S110 with the same quality, so I reluctantly accept. “Reluctantly” because the G7X is both bigger and heavier than the S110. Though the G7X is a better camera, I subscribe to the adage that “the best camera is the one you have with you,” and if a camera reaches point of being too heavy, I tend to leave it behind. But I am left with little choice if I want a comparable quality to the S110.

This substitution resets the estimate to another “7 to 10 days.” However, it would be almost a month before they finally shipped the substitute camera. Given that it’s a significantly more expensive camera, I suspect the substitute is a refurbished model, though I can’t tell with my untrained eye. 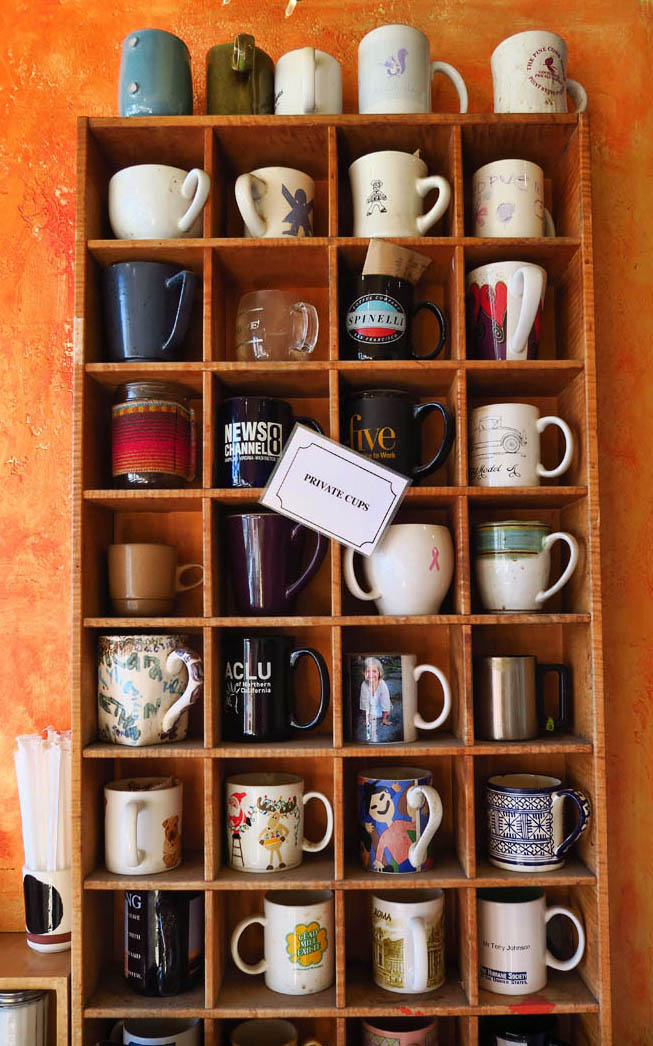 At the wonderful Bovine Bakery, “Private Cups” are the local’s way of reuse. 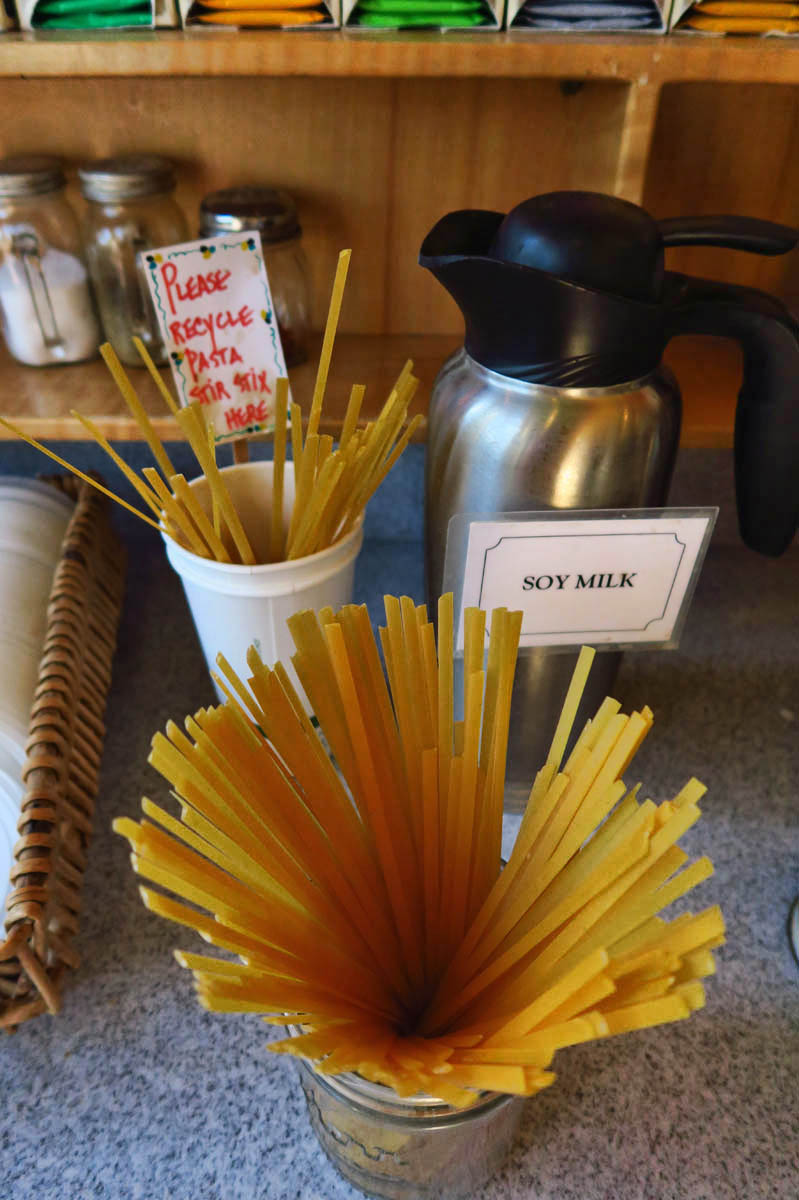 The “green factor” takes a minor adjustment, as I figure out what the pasta sticks are for…(recyclable stir sticks!)

I arrive in Point Reyes the day before the season opener of their Farmer’s Market. I figure it’s a perfect venue to try out the new camera, though I have yet to read the manual.

The entire town is so photogenic with so much local influence, “farm to table” foods, and their many shades of “green.” The cool moist climate and rolling grassy hillsides provide ideal conditions for dairy farming, giving the entire landscape a wholesome, home-grown ambiance. The National Seashore is unique in that it was primarily dairy land when it was protected in 1962. There are still 15 working dairy farms within the park boundaries producing milk, ice cream, and locally made cheese delights like Point Reyes Blue, and Cowgirl Creamery. 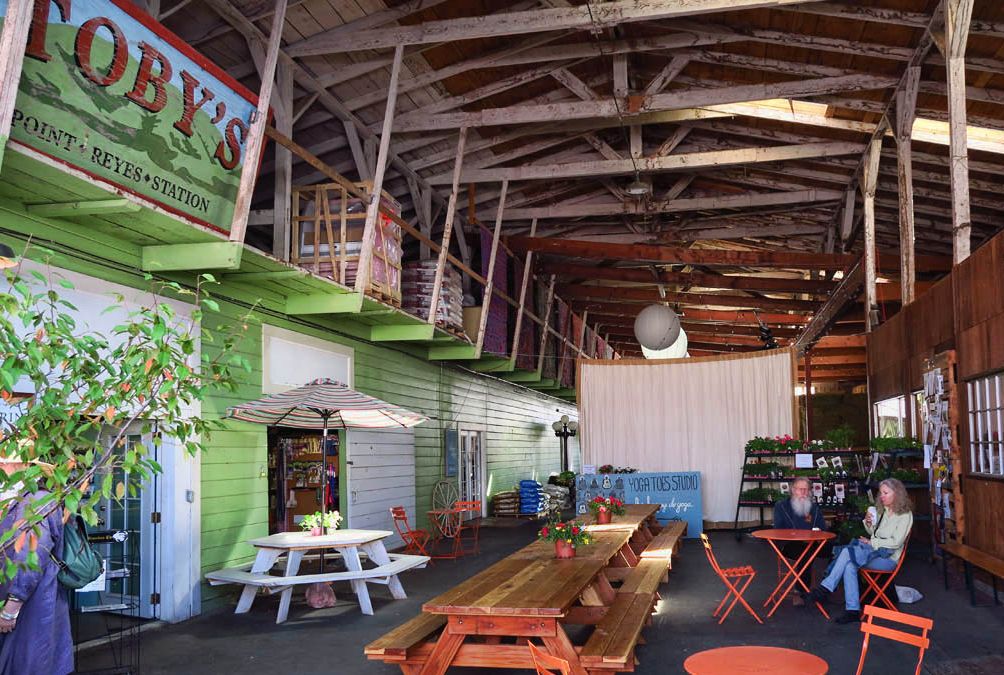 Toby’s Feed Barn is the location of the Saturday Farmers Market. 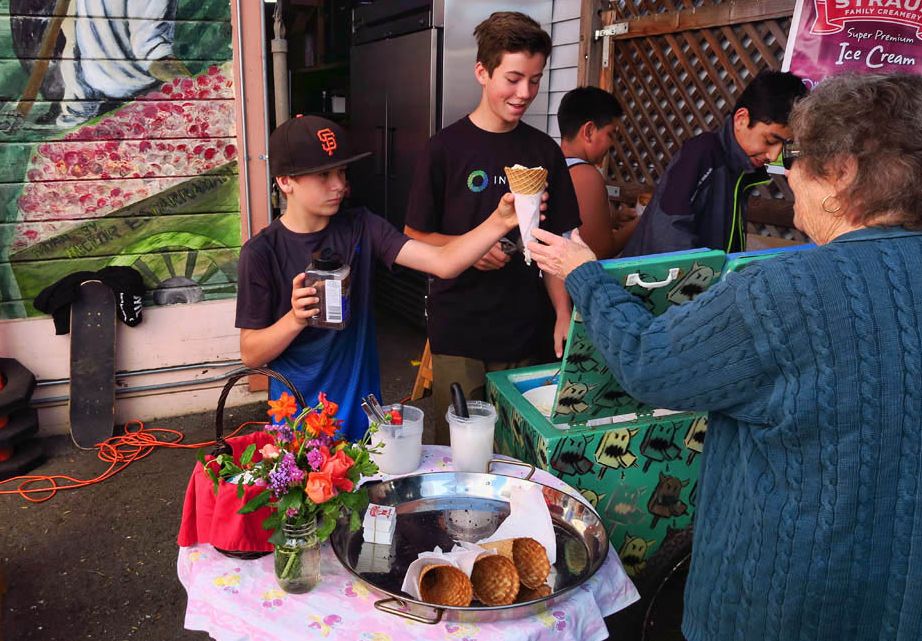 Since it’s the first day of the season, everybody gets a free ice cream cone, compliments of Straus Family Creamery 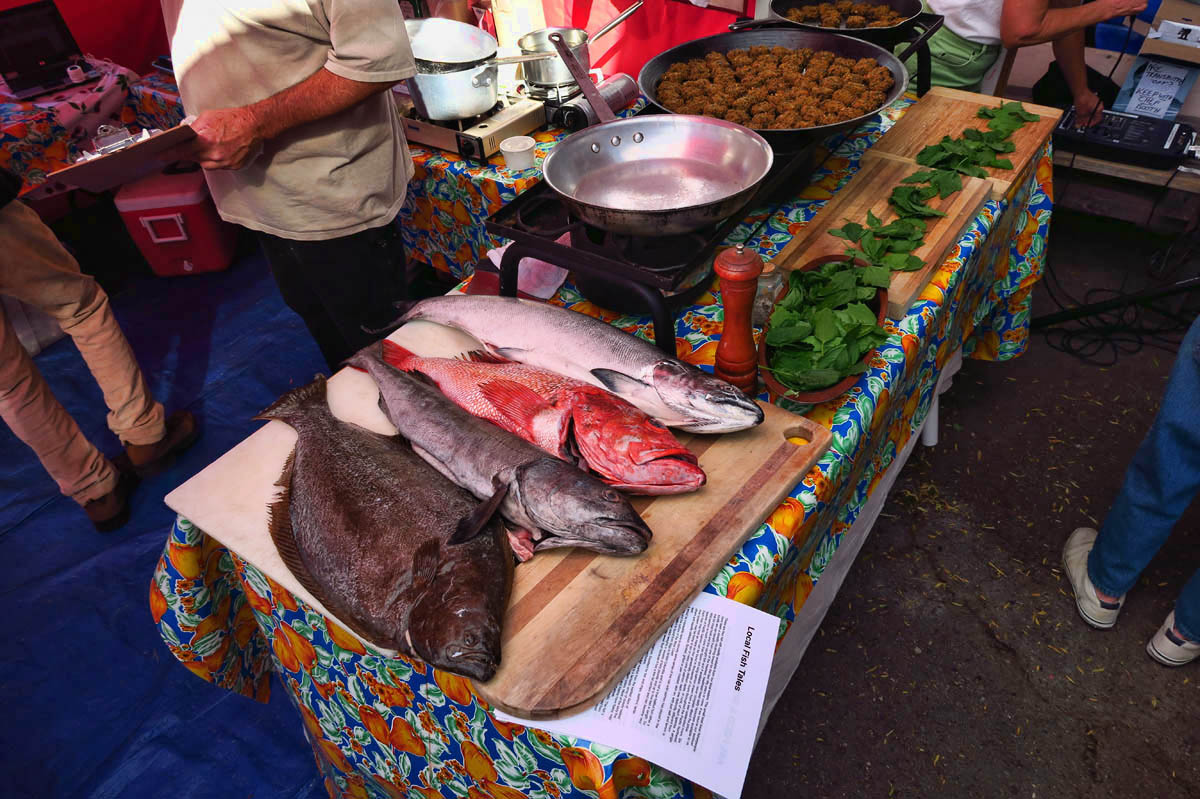 Every Saturday Farmer’s Market features a cooking demonstration by a local chef. 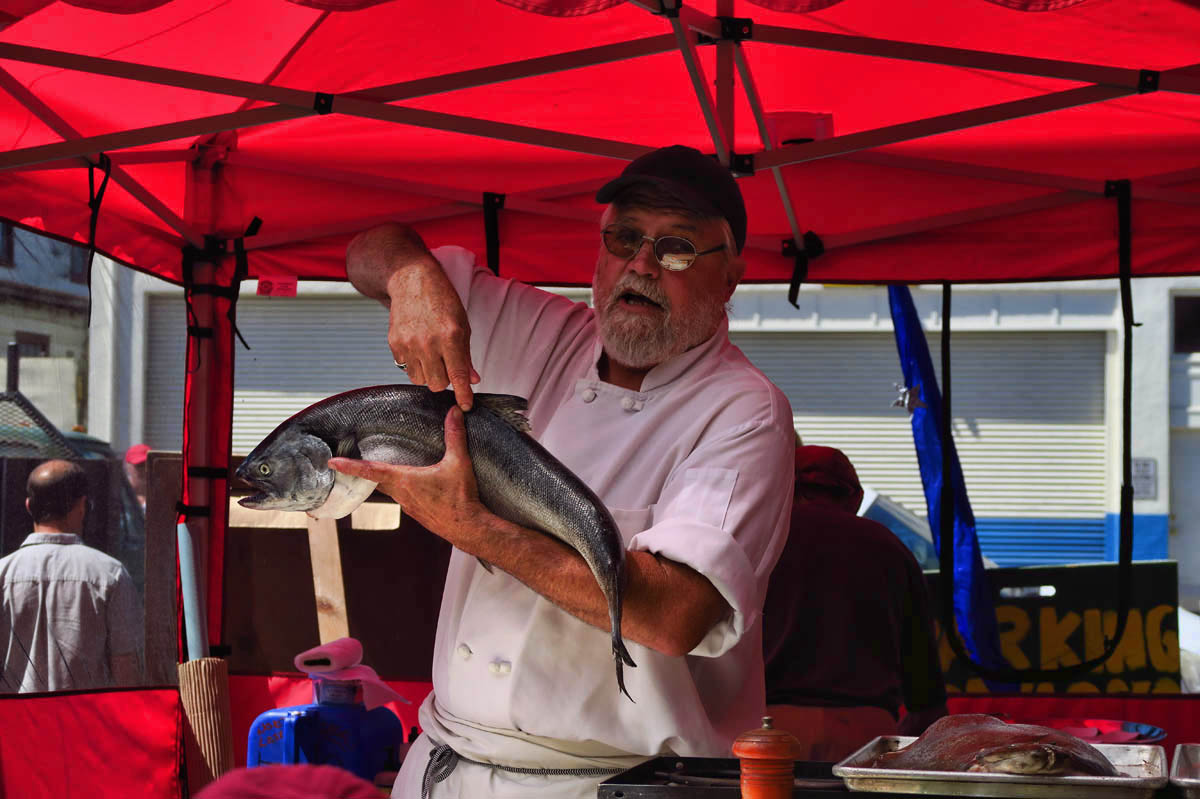 Not only does he demonstrate how to filet this King Salmon, but he will pan saute it and serve everyone a sample along with some quinoa cakes, and mixed greens with Meyer’s lemon vinaigrette.

With a population of > 1,000 people, the Farmer’s Market feels more like a local Saturday morning town meeting. Given that this is the season opener, there is a toast to the local farmers with Wild West Ferment’s plum and berry cider in mason jars, and free ice cream from Straus Family Creamery. The market takes place every Saturday at Toby’s Feed Barn, where (as friend LuAnn pointed out to me,) their website states, “Where else can you listen to a Pulitzer Prize winning author and go home with fresh strawberries, summer bedding plants, the perfect gift for a friend and a bale of hay?” 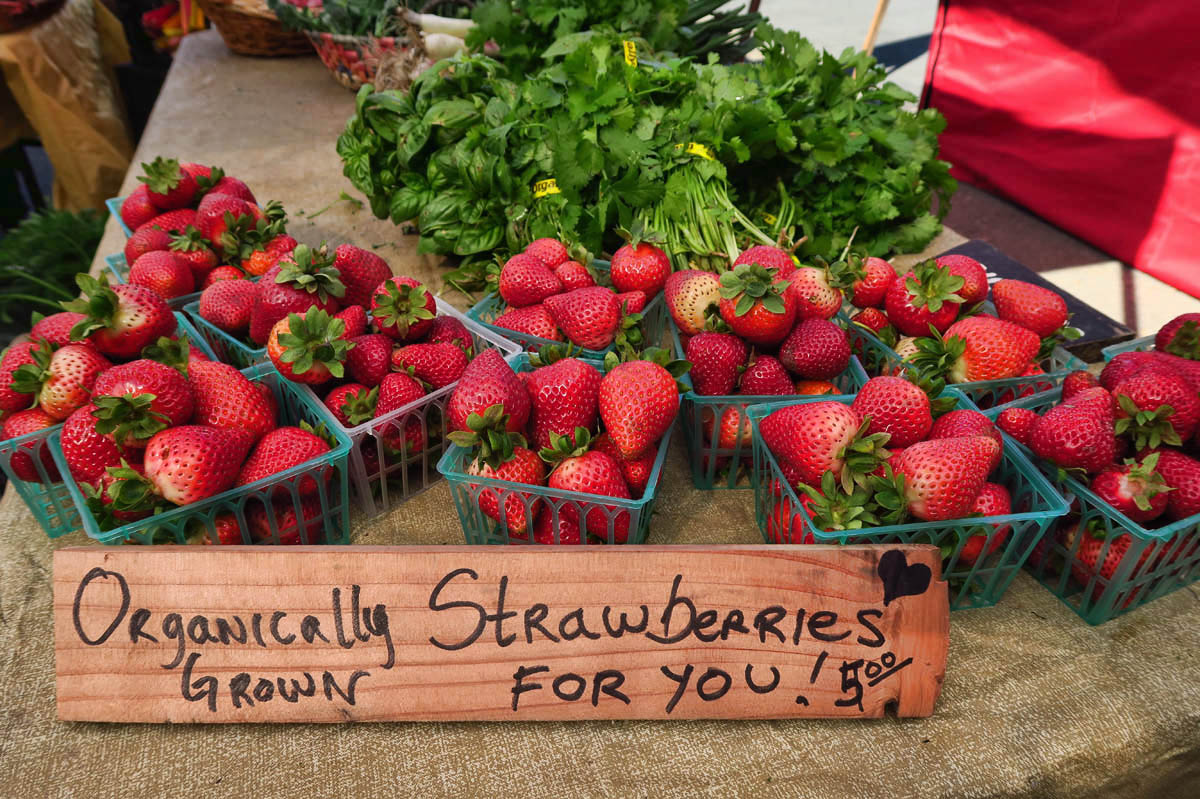 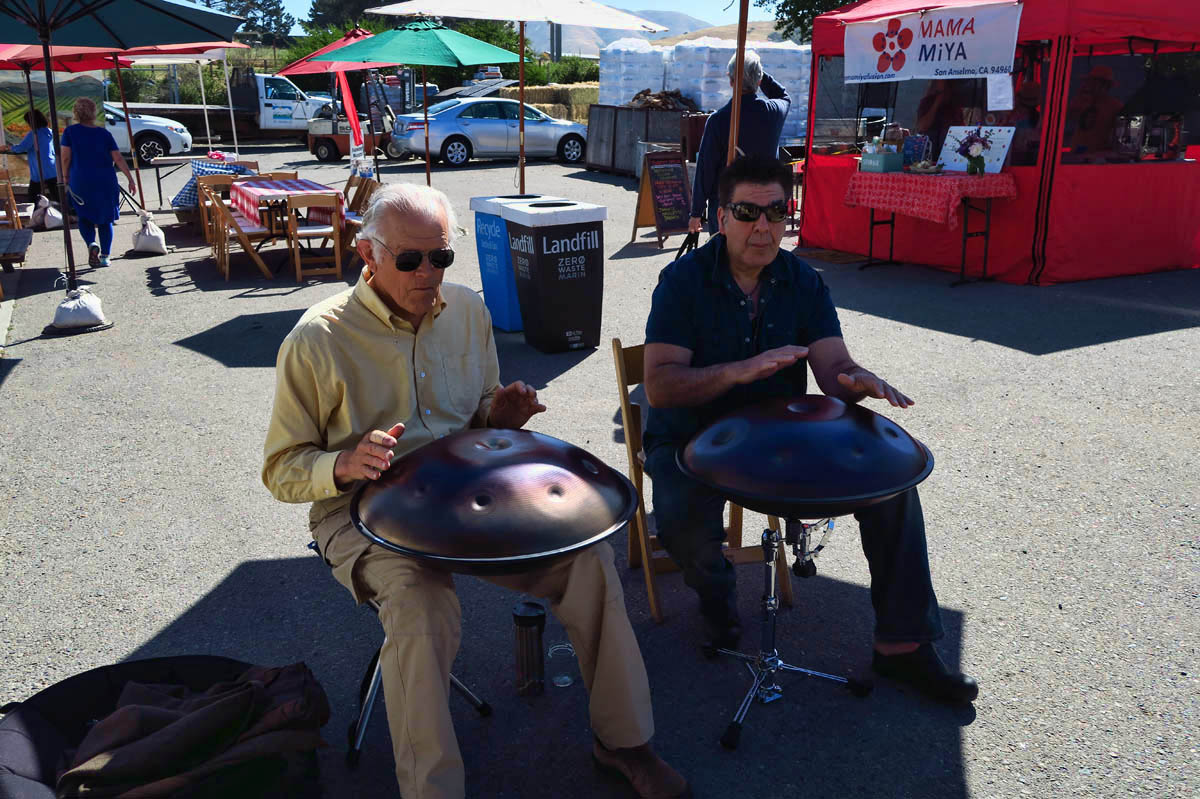 I am not sure what instrument these guys are playing, but it’s lovely music. It looks like an inverted wok. 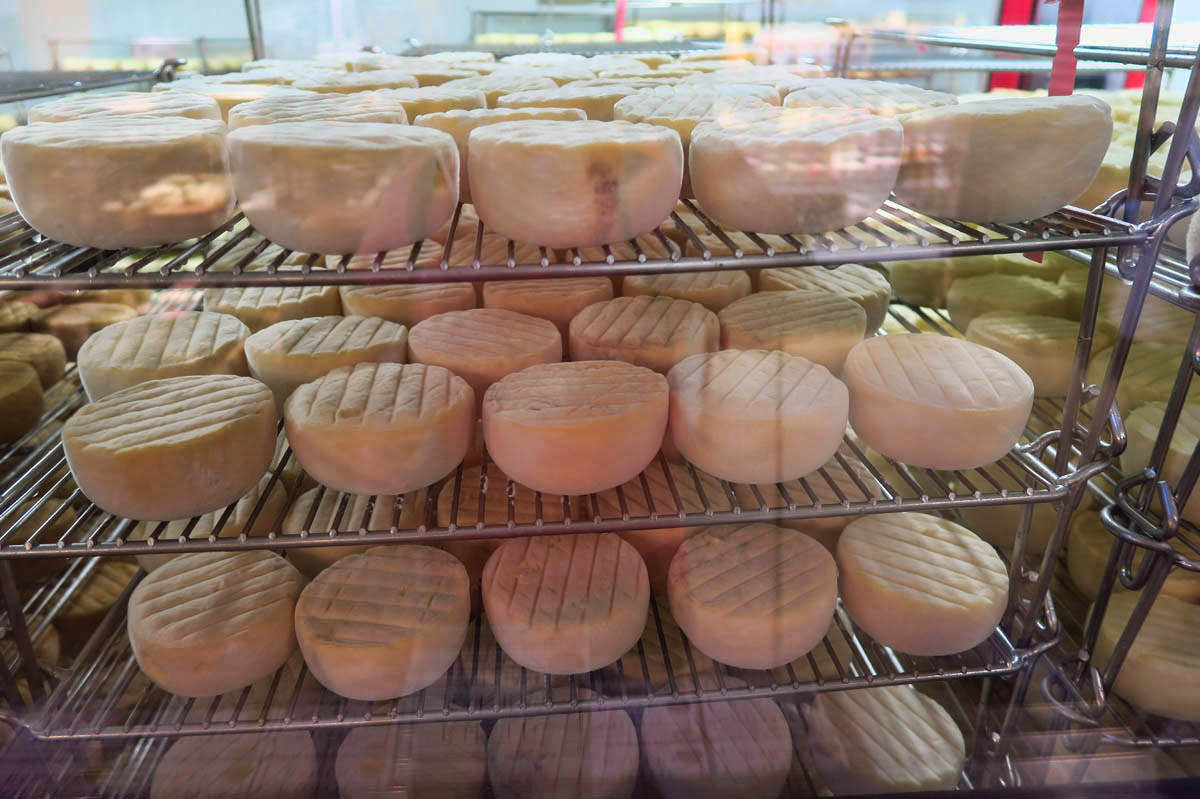 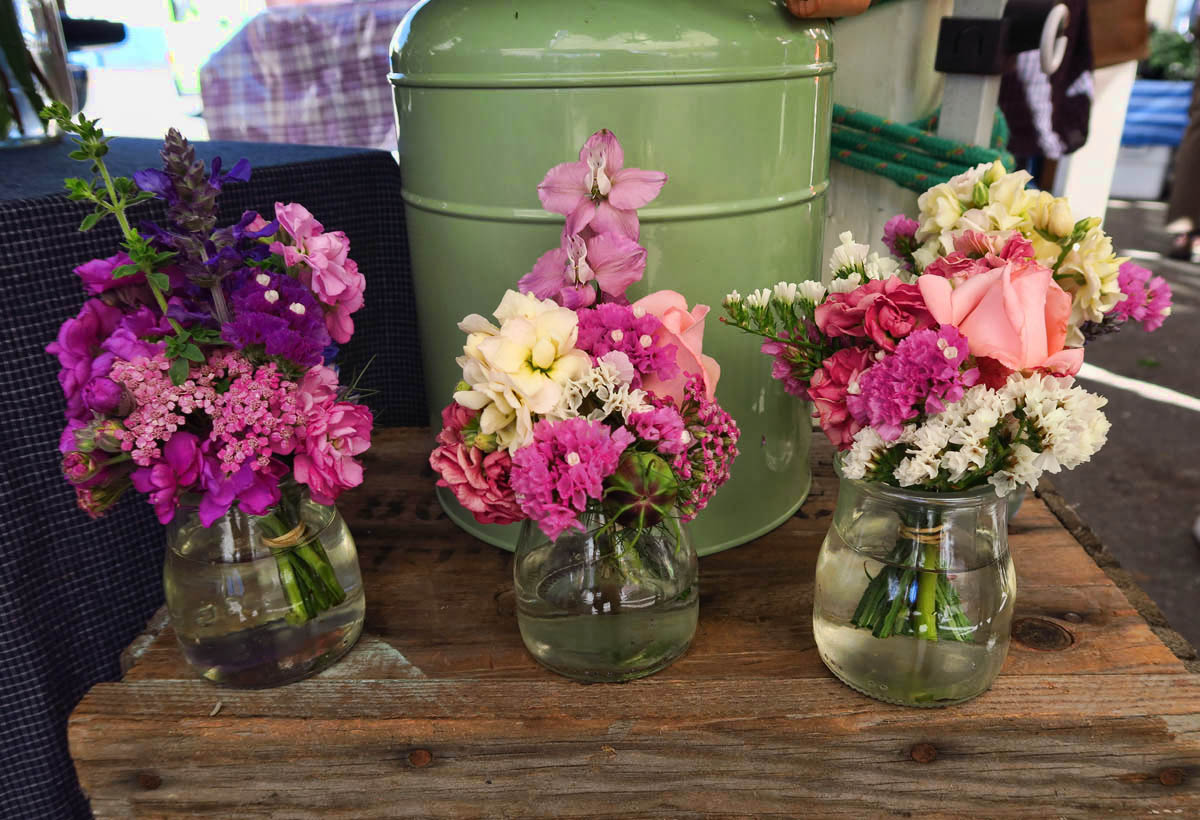 As for the camera, the jury is still out. There are as many things that I like about it as not. I think it takes pretty good quality photos. Enlarging in post processing reveals little to no loss of sharpness. And (in my brother Don’s words,) “it has a nice light to shadow dynamic range.” But it irritates me that an extra quarter inch of thickness has been added for the vanity of a flip “selfie screen.” And while I like the sturdy metal casing, if I am to carry it in my pocket, I may need a sturdier belt to keep my pants up! It has a nice feeling little “thumb grip” by the shutter button, but the pronounced “REC” button immediately below it makes it challenging to use the thumb grip without depressing the video button. I accidentally took seven videos during my Farmer’s Market tour!

Still, it’s fun to have a new toy to play with in such a scenic area as Point Reyes! 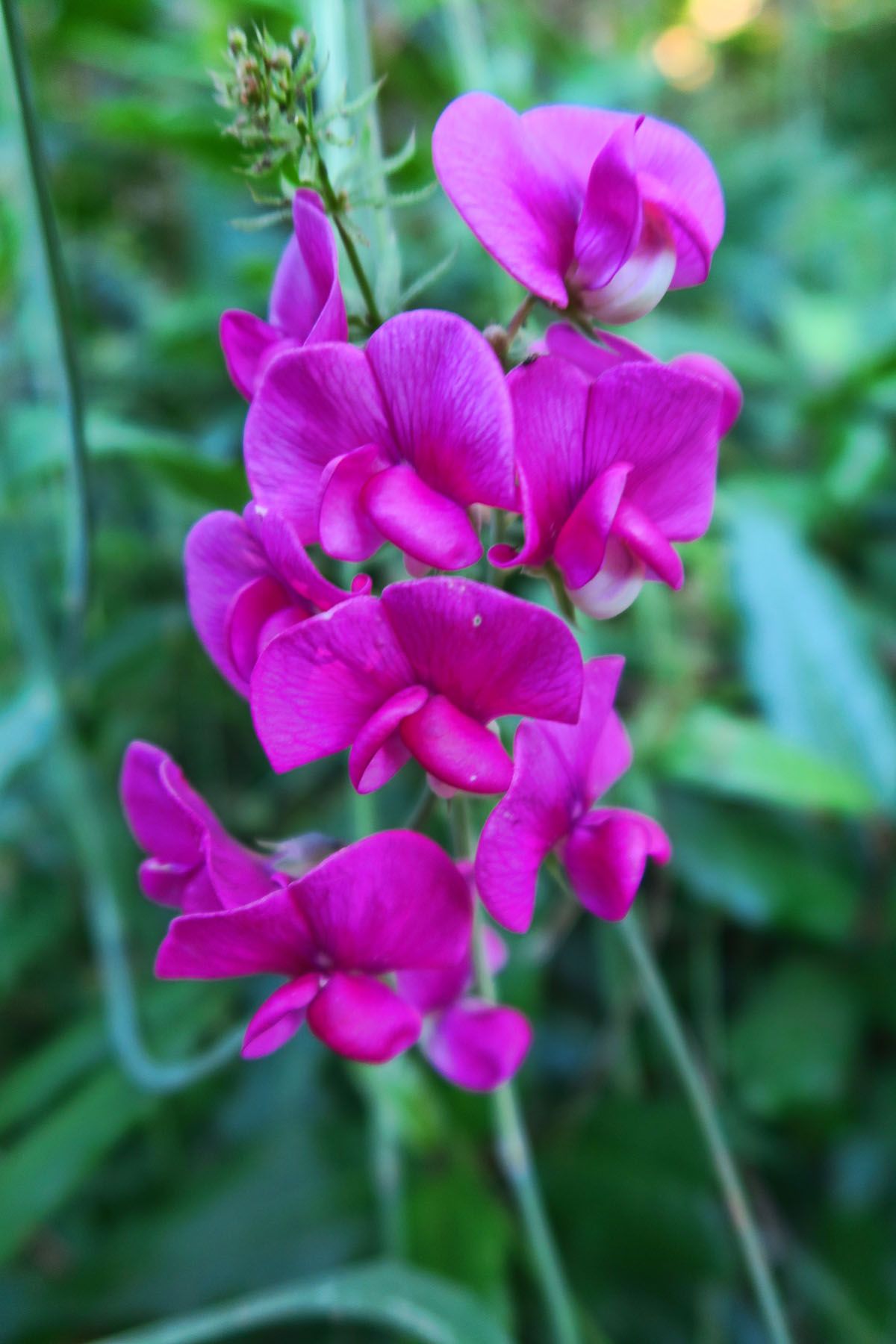 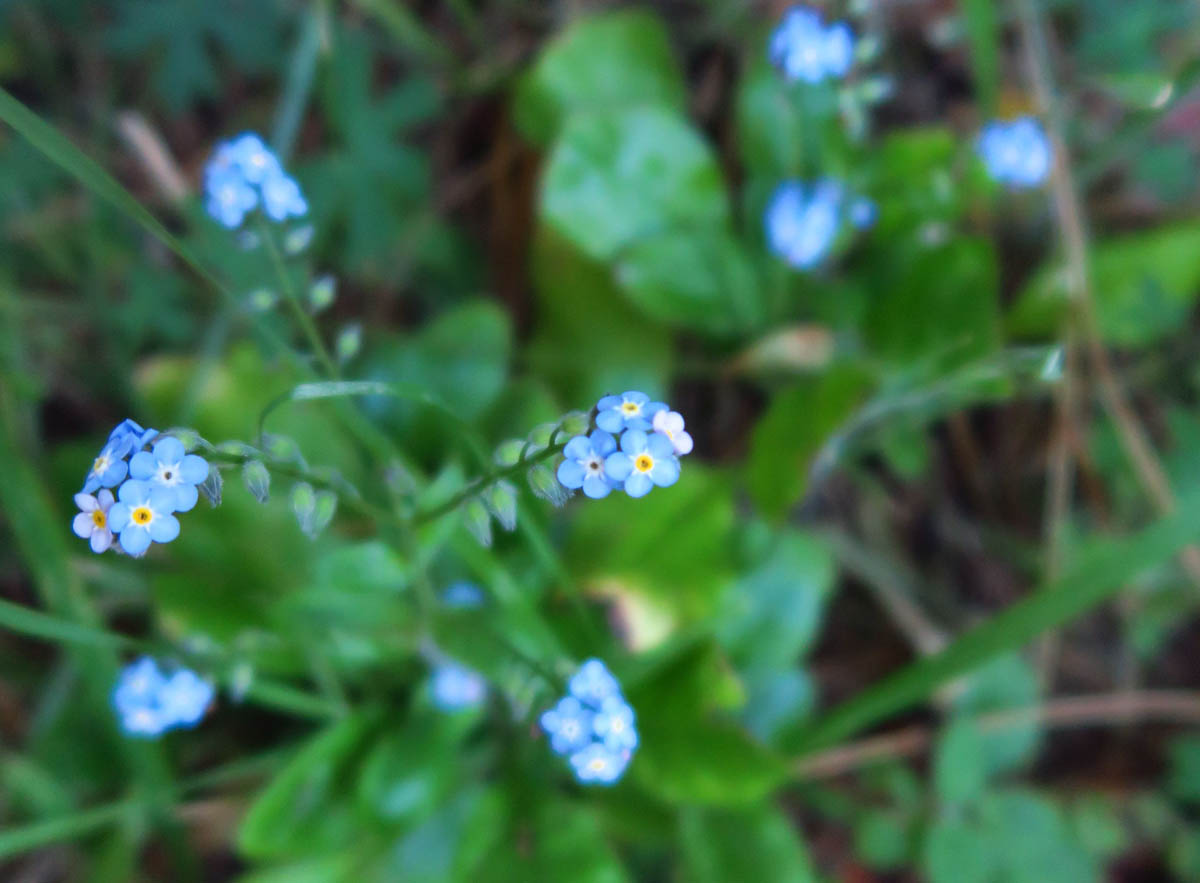