In the days of my youth, cross-country roadtrips with my family typically coincided with my Dad having just bought a new car. Dad was a stylish man and always preferred the Chevrolet Impala. My first trip to California at four years old was in a 1957 golden Chevy Impala with the dramatic, sweeping “bat wings” on the tail. My second trip would be in the more conservative 1966 marina-blue Impala Sedan. It was the summer of 1967, and not unlike today, the headlines were filled with stories of racial tension and talk of revolution. Though most of the killing with assault rifles was taking place on the other side of the planet. Here on our shores, it was “The Summer of Love.” 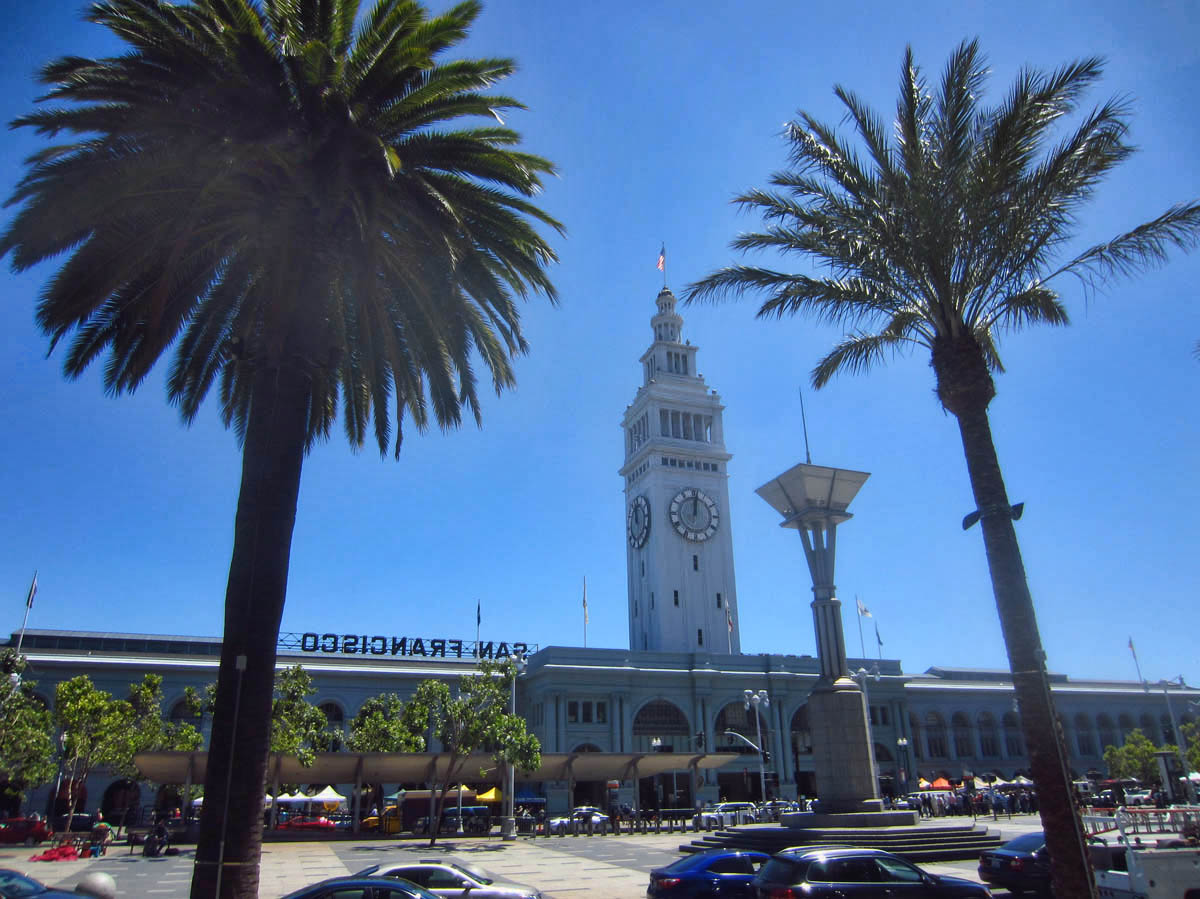 Pier One — The Embarcadero 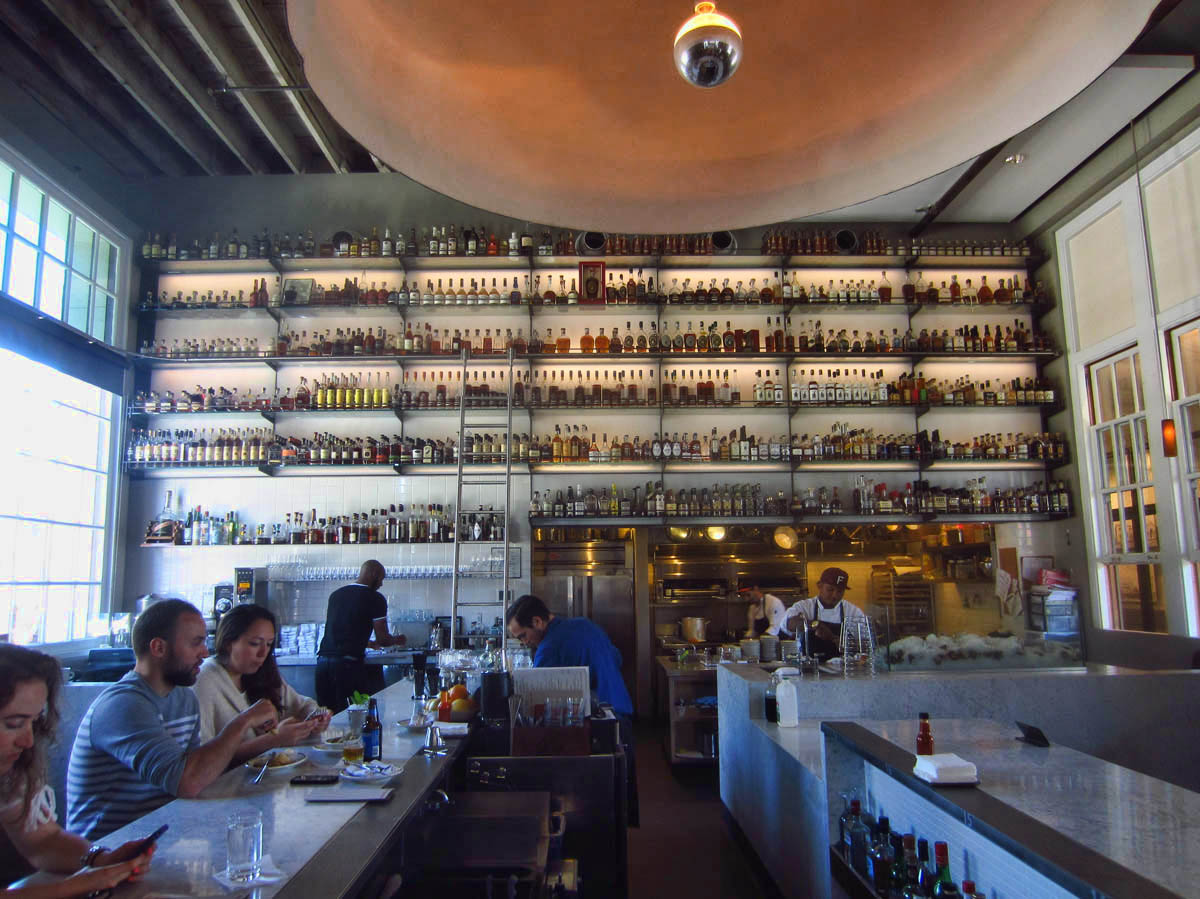 This place is called “Hard Water.” That entire back wall is covered with nothing but whiskey. They offer flights which go up as high as $250. 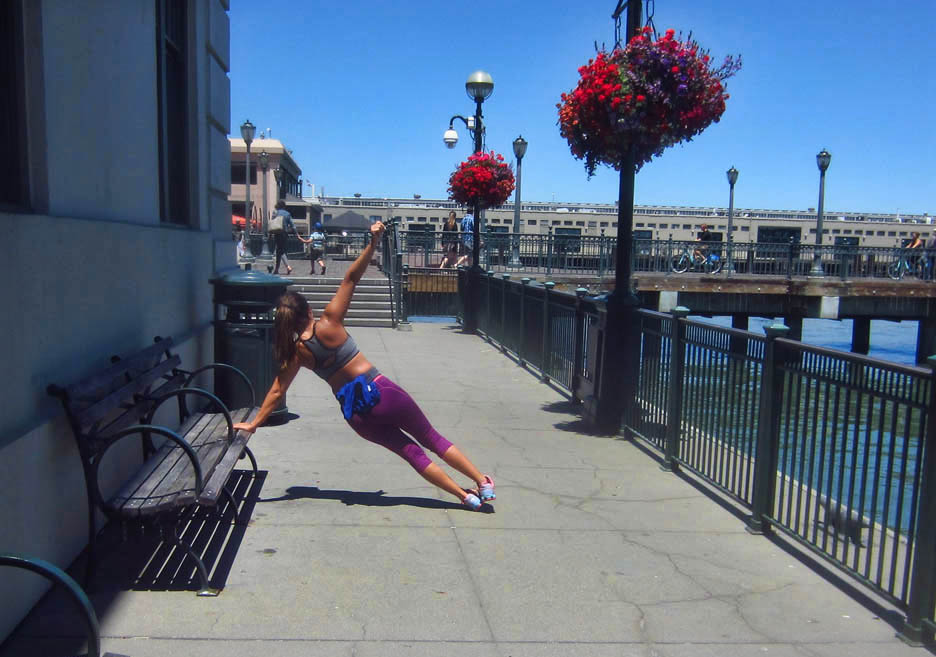 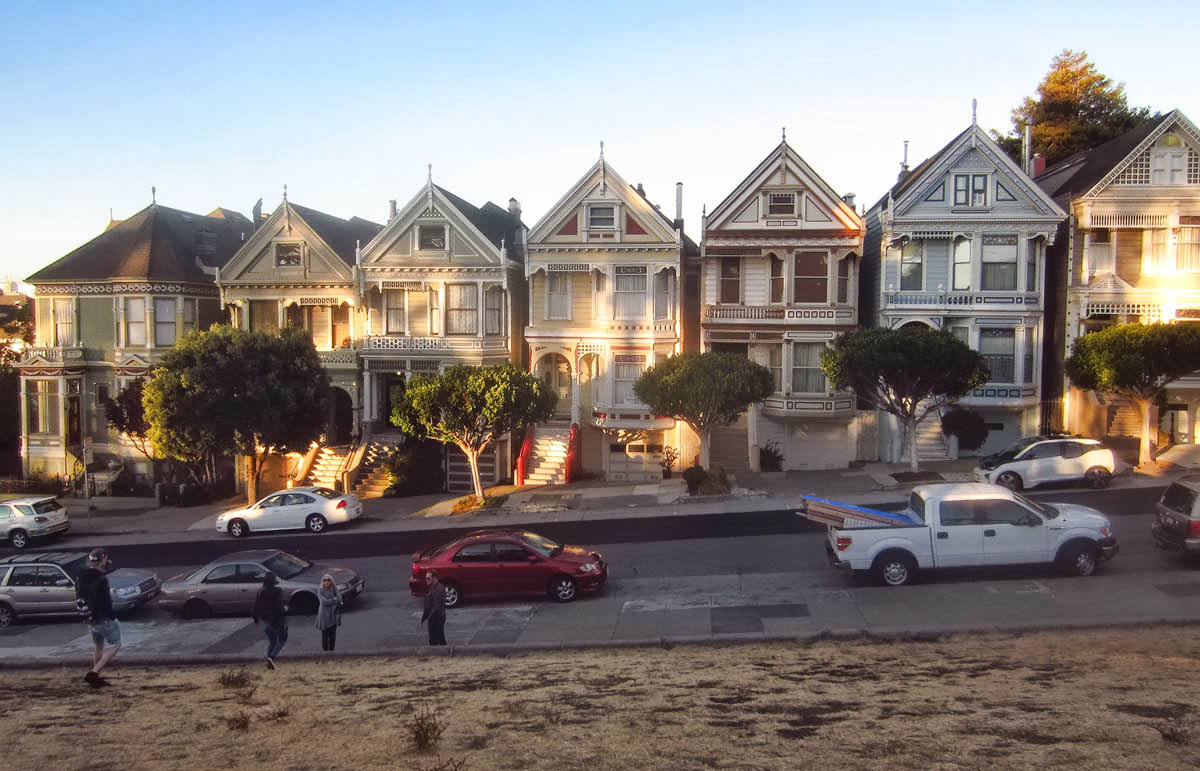 Things were rapidly changing on the music scene, and American Bandstand was no longer cool. “Flower Power” ruled as the counter-culture theme. There was a new FM radio station in town, and music was going “underground.” Songs were now longer, with often times entire album sides being featured on the radio. Most carried a political message, and posed forbidden concepts like “heavy,” “mind-bending,” and “psychedelic.” Make love, not war. San Francisco had become the “music Mecca” as new bands like Big Brother and the Holding Company, Grateful Dead, and Jefferson Airplane were all converging on a previously unknown street corner just blocks from Golden Gate Park….Haight Ashbury. “Hippies” were flocking to the area, and I was a twelve year old “hippie wannabe.” 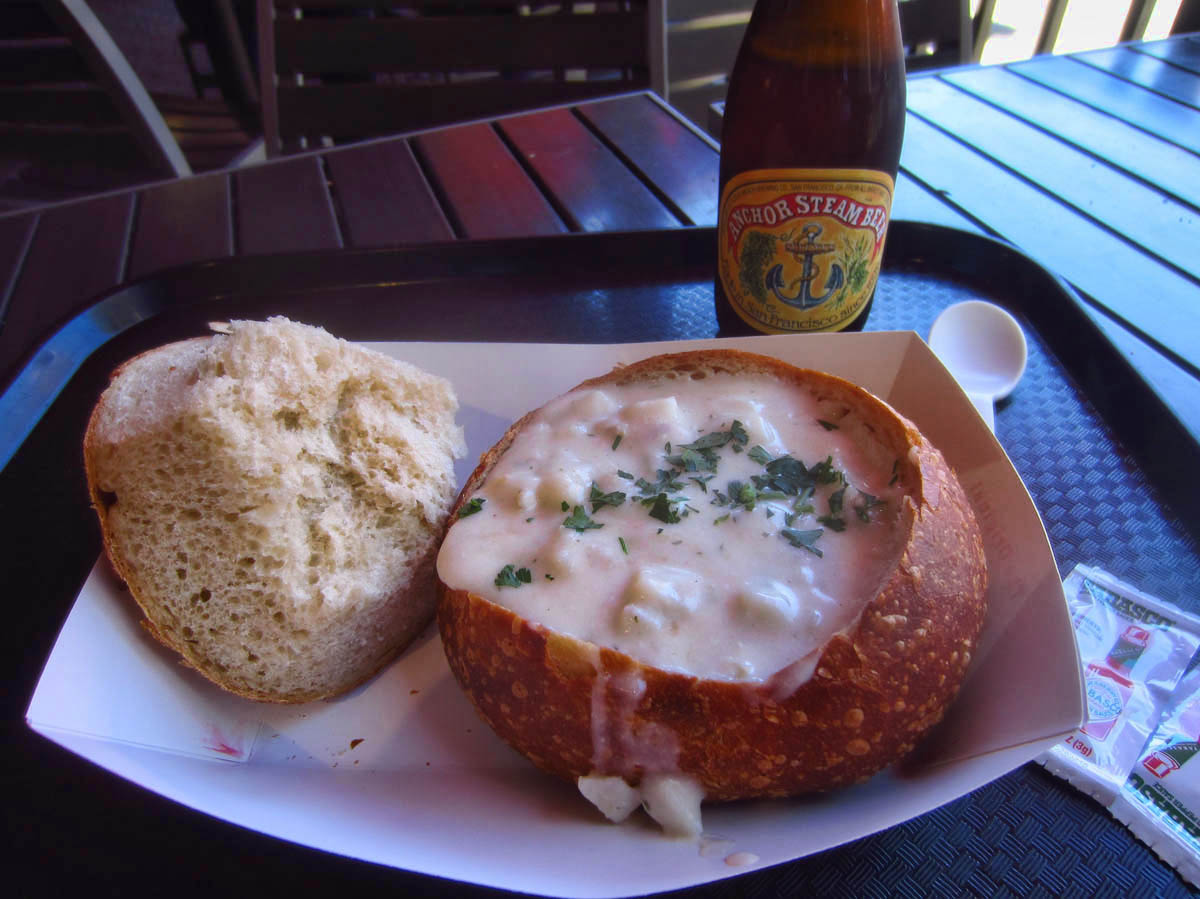 I had my first sourdough in San Francisco. It’s as good as I remembered. 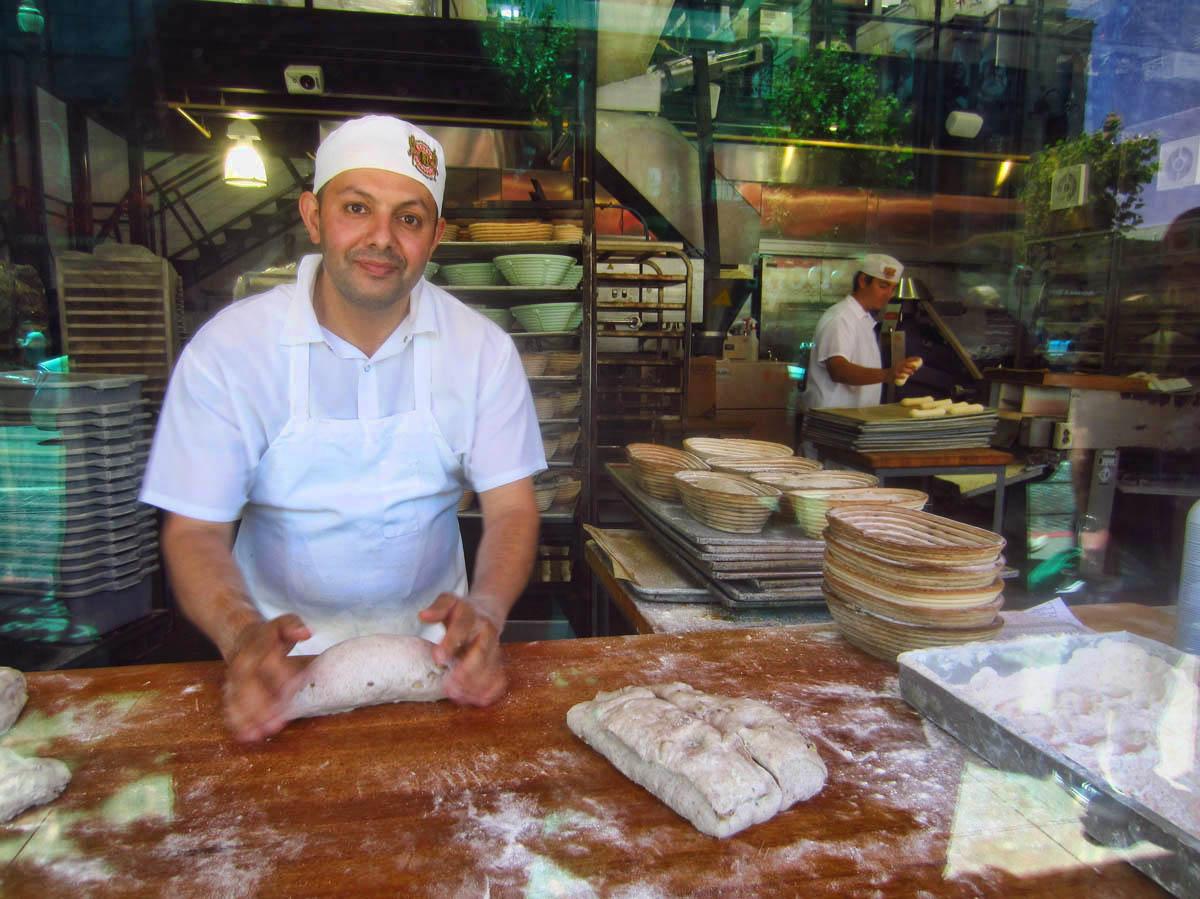 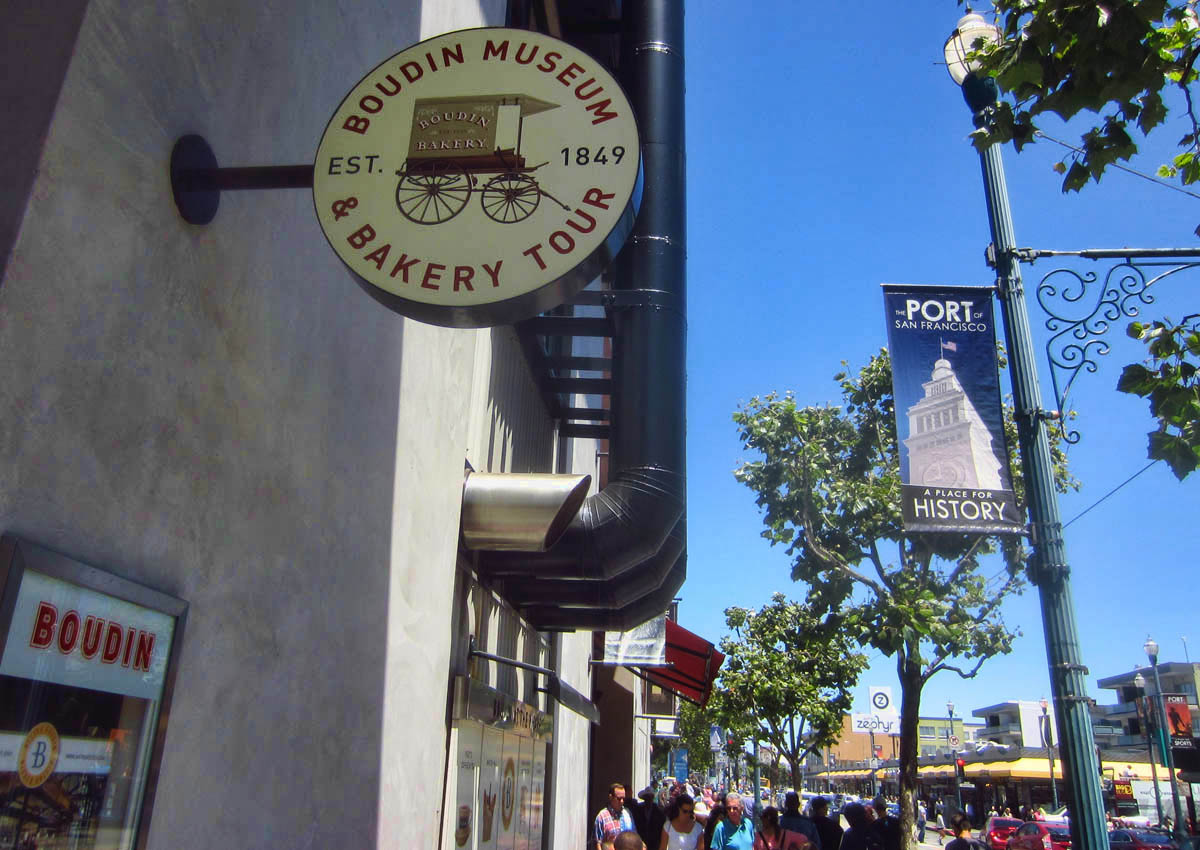 See those big pipes on the side of that building? They are venting out the smell of hot baking sourdough on to the main street. Marketing at its best.

I begged my parents to take me to San Francisco on our summer road trip. If I couldn’t be a hippie, then please at least let me see some. Finally, they relented. Now, all I needed was some flowers for my hair…

Although I have been to San Francisco many times since then, I haven’t revisited those places from that summer of 1967. It is my intent to do so with this visit. I want to experience all the same things we did on that trip…the tastes, the sights, the smells, and most of all, the emotions. 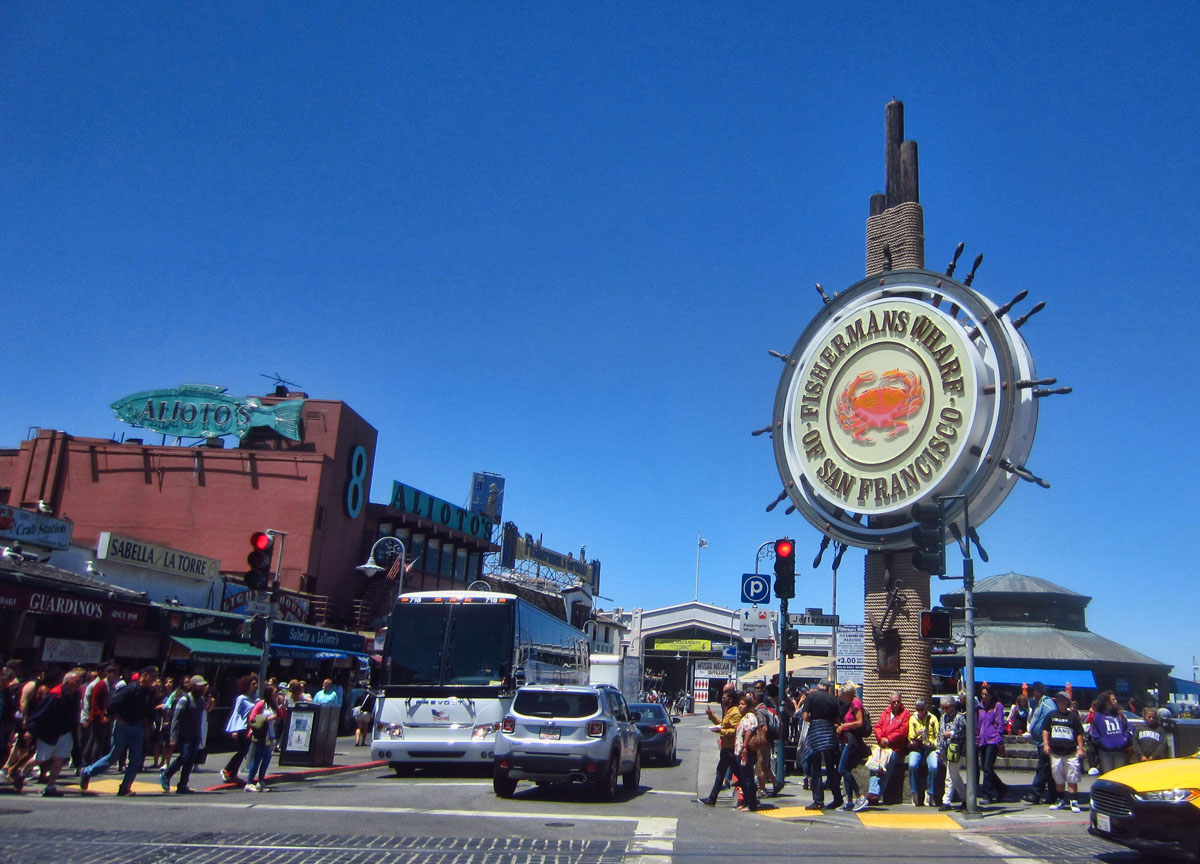 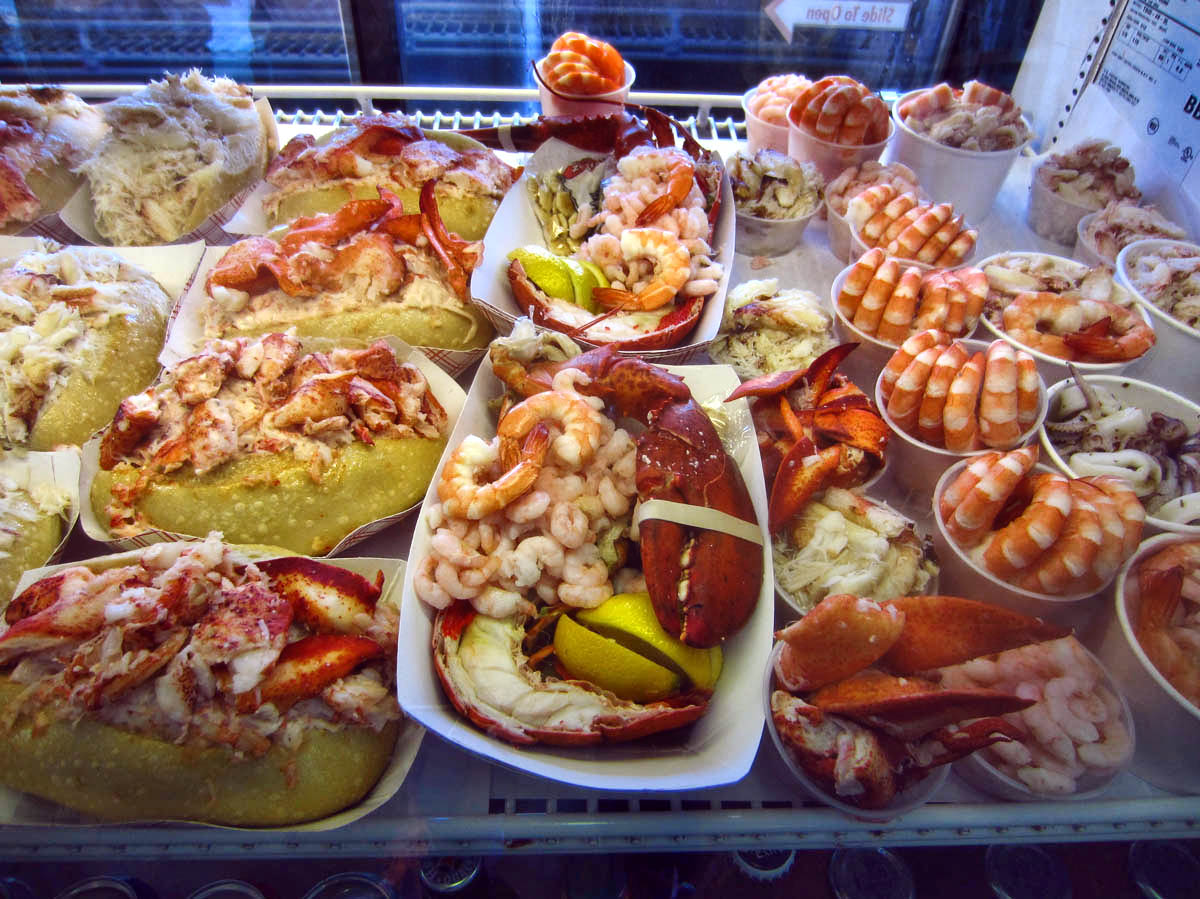 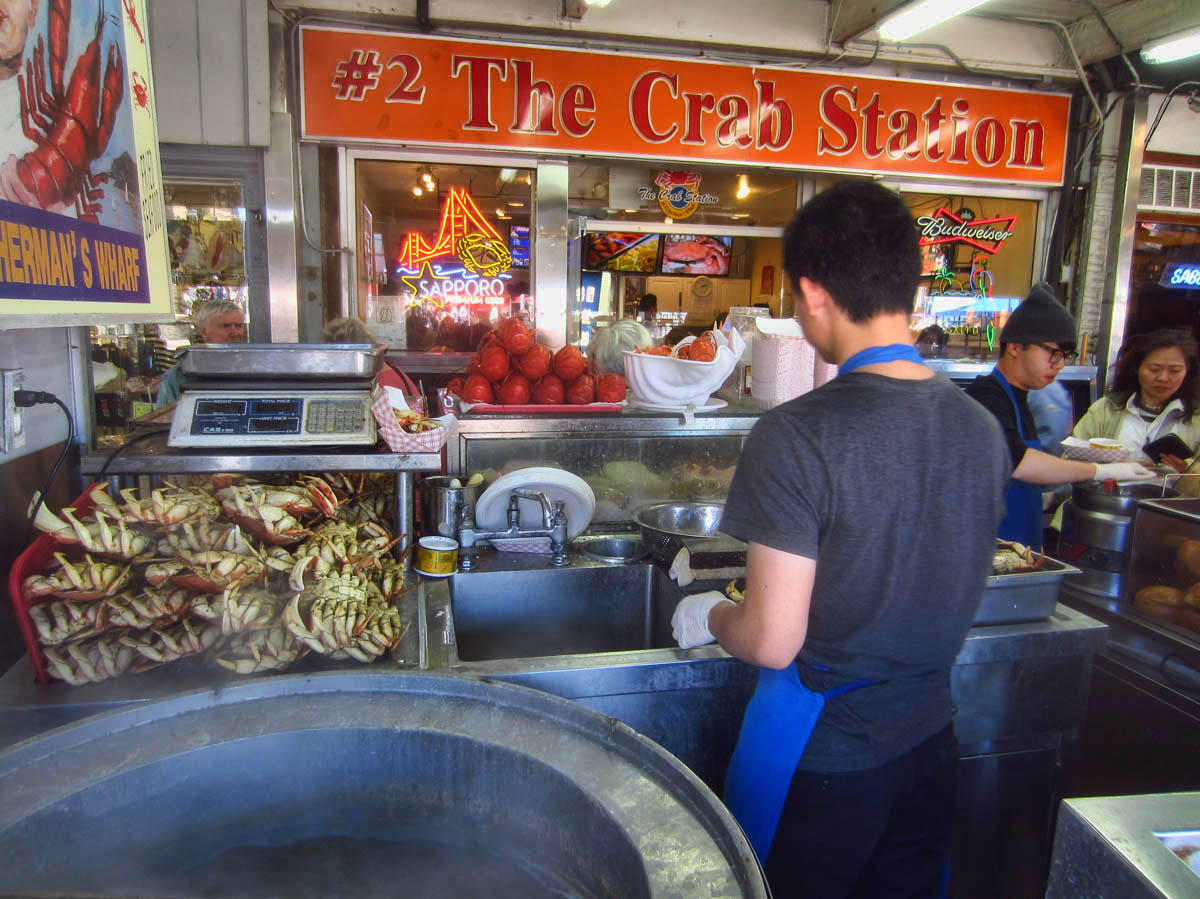 We all have memories of things that unrightfully terrified us as kids, and one of mine is standing on the “running board” of the Powell-Market Street Cable Car, hanging on to the pole with everything I had in me. The car was packed, and we could not get a seat so we had to stand. I remember the thoughts going through my head, knowing the next turn ahead was going to be “it.” I was going to go flying off into the street as the cable car sped down the hill with my family, never to be seen again! 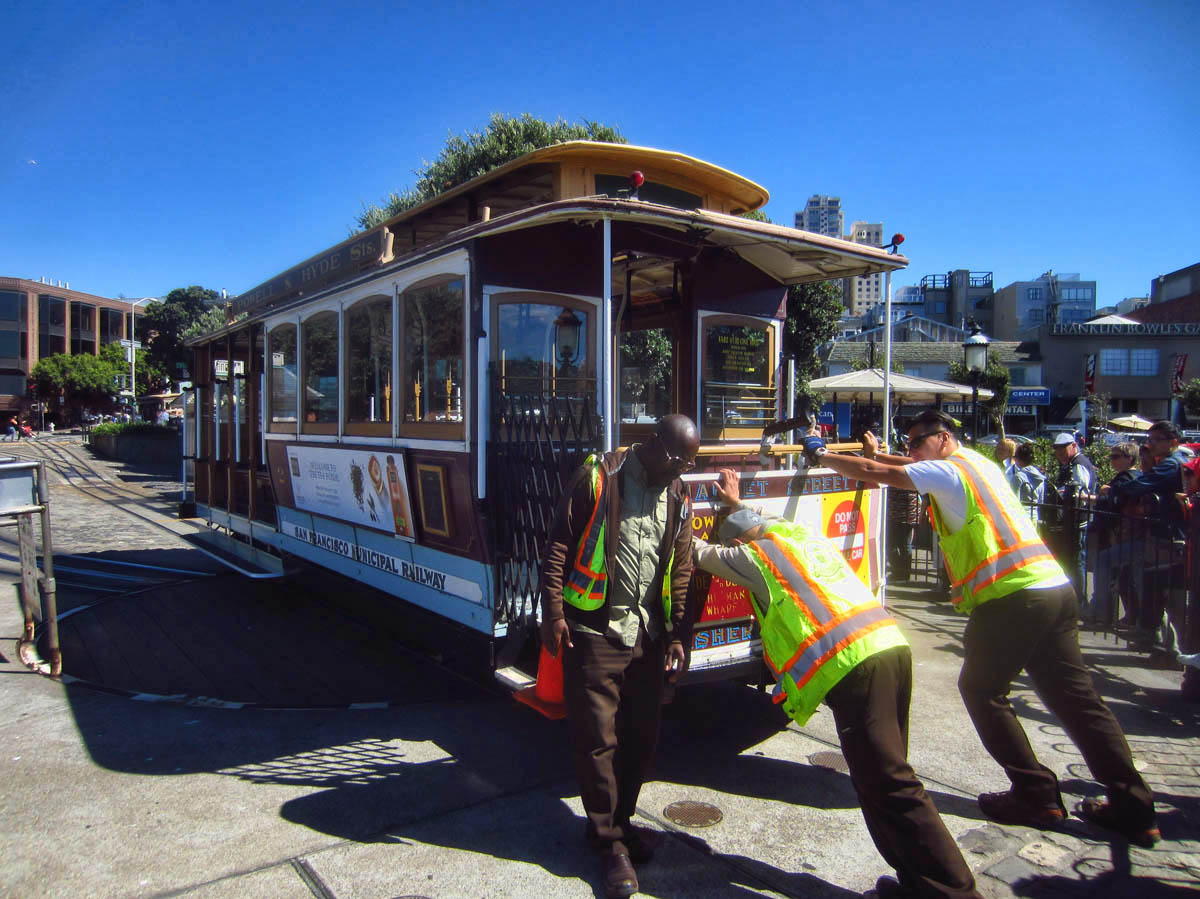 At the turn-around point, the car must be pushed out and back over that V-shaped track on the left to reverse directions. 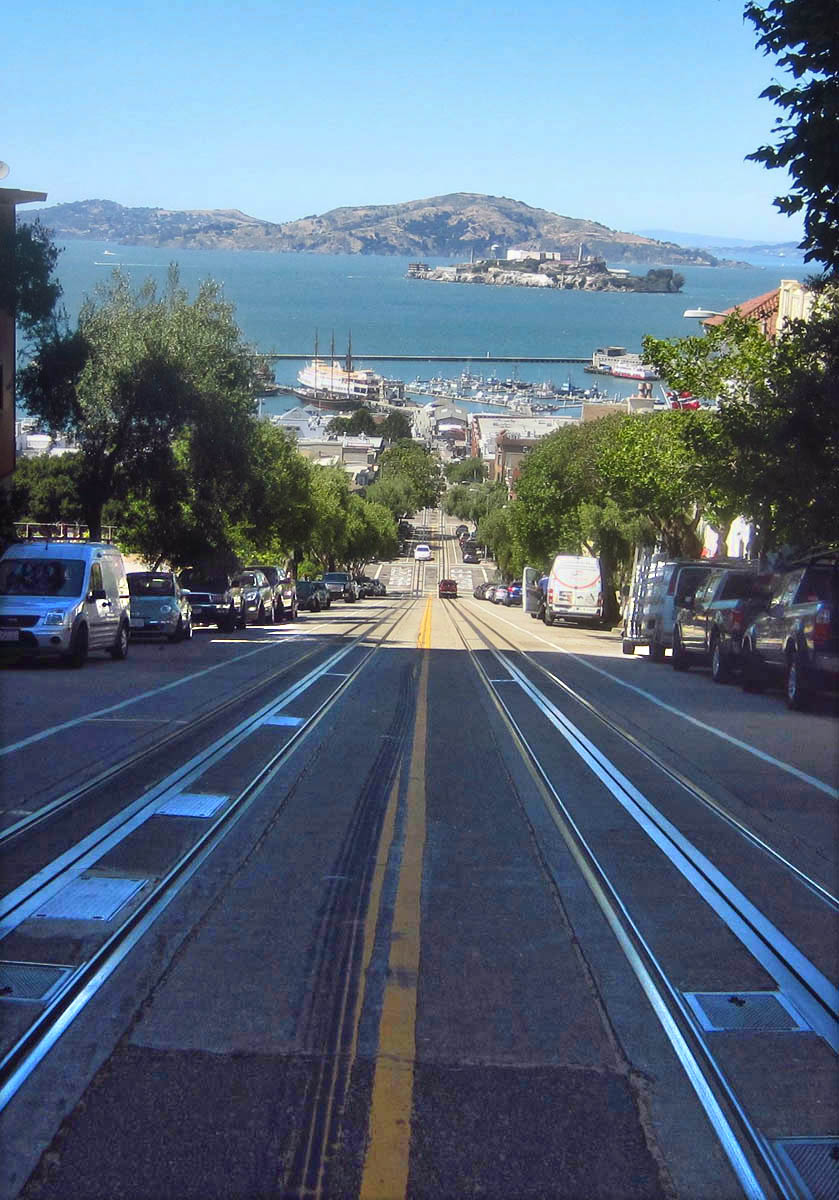 Photos don’t adequately show the steepness of these hills! 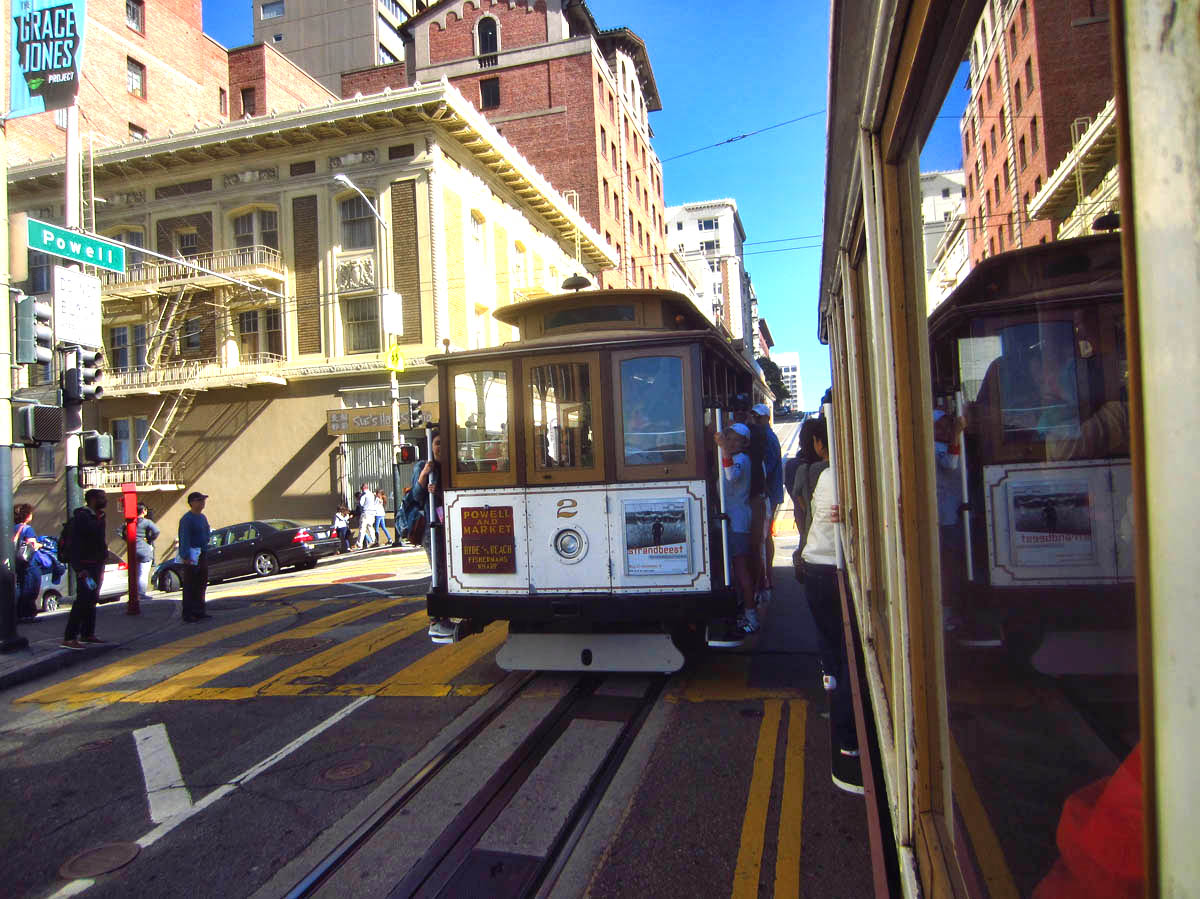 This is how close the cars come when two cars meet. I would be afraid someone might yank me off!

I must still have some fear about this early cable car ride, as I can’t bring myself to stand on the running board again. Instead, I take a spot in the vestibule at the back. Only two riders are allowed to stand there, and my timing is good for one of those spots….if you call waiting in line for 45 minutes “good!” I am glad to see my childhood fears were warranted. It’s a wild ride up and down those steep hills, that damned bell clanging the warning of imminent doom of being flung out into the oncoming traffic with every 90 degree turn! 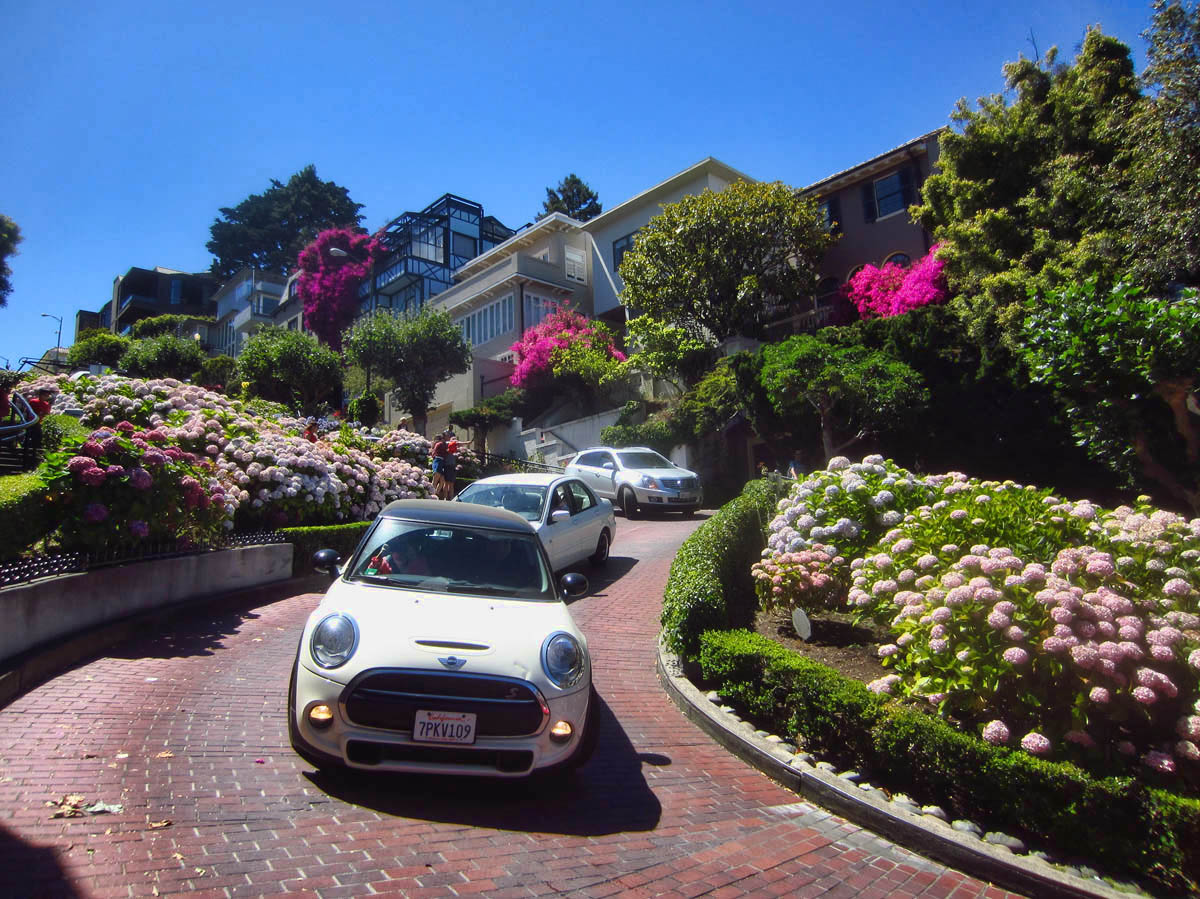 Lombard Street, the “crookedist” street in the world. 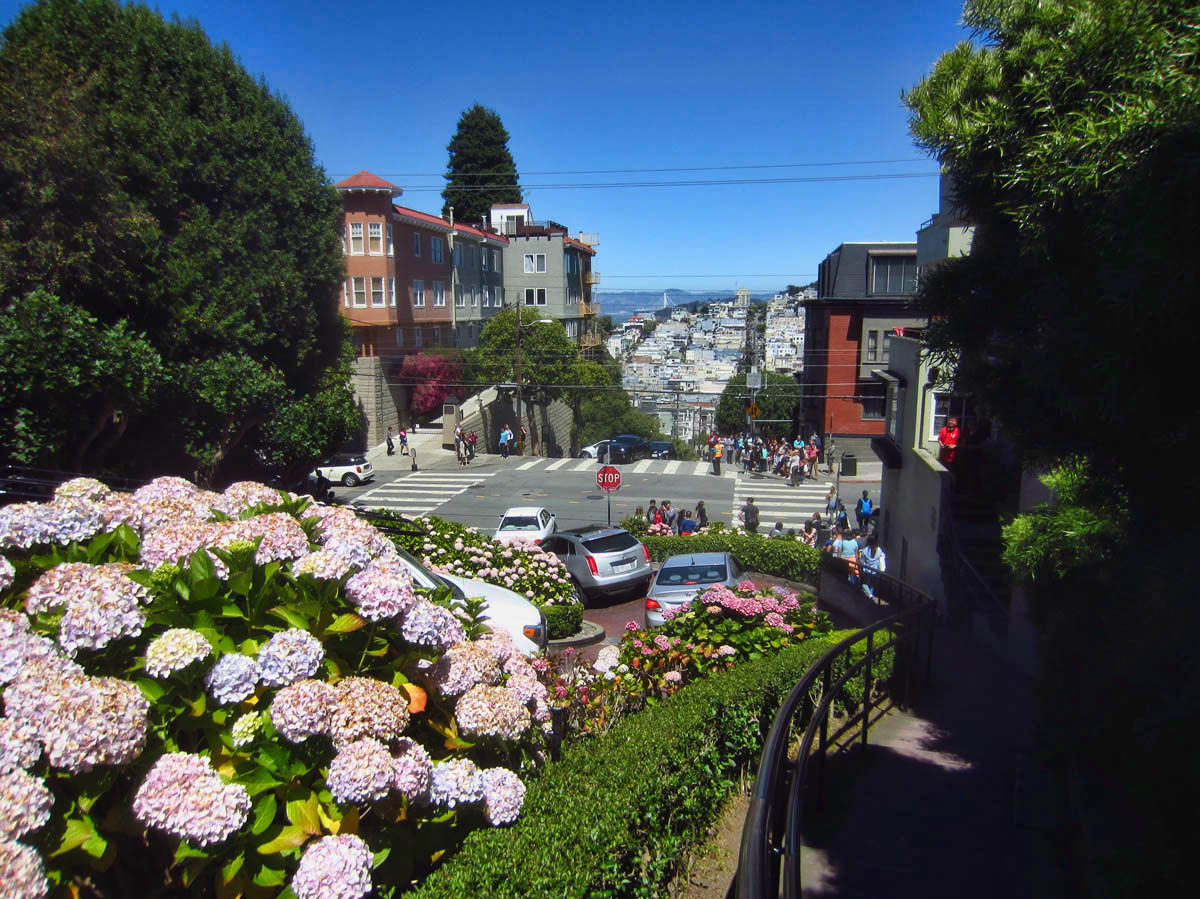 More beautifully landscaped than I remembered.

I also revisit Lombard Street, the “crookedist street in the world,” to see if it was as “extreme” as I remembered as a twelve year old. I have a passion for hydrangeas in my adult life, so the street is even more beautiful than I remembered. Though I think going down it in a 1966 Impala “land yacht” made it seem a lot more treacherous than the “mini” cars of today.

But my number one nostalgic revisit still awaits. I hop on the city bus signed “Lower Haight” bound for that infamous corner of Haight Ashbury, curious to see what I will find there, 49 years after “The Summer of Love.” I signal for a stop at the intersection of Haight and Ashbury and laugh out loud as I step off the bus. There on the corner is a Ben and Jerry’s Ice Cream shop. How poignant that just half a block from the famed “Grateful Dead House” at 710 Ashbury is all the “Cherry Garcia” ice cream one could eat. 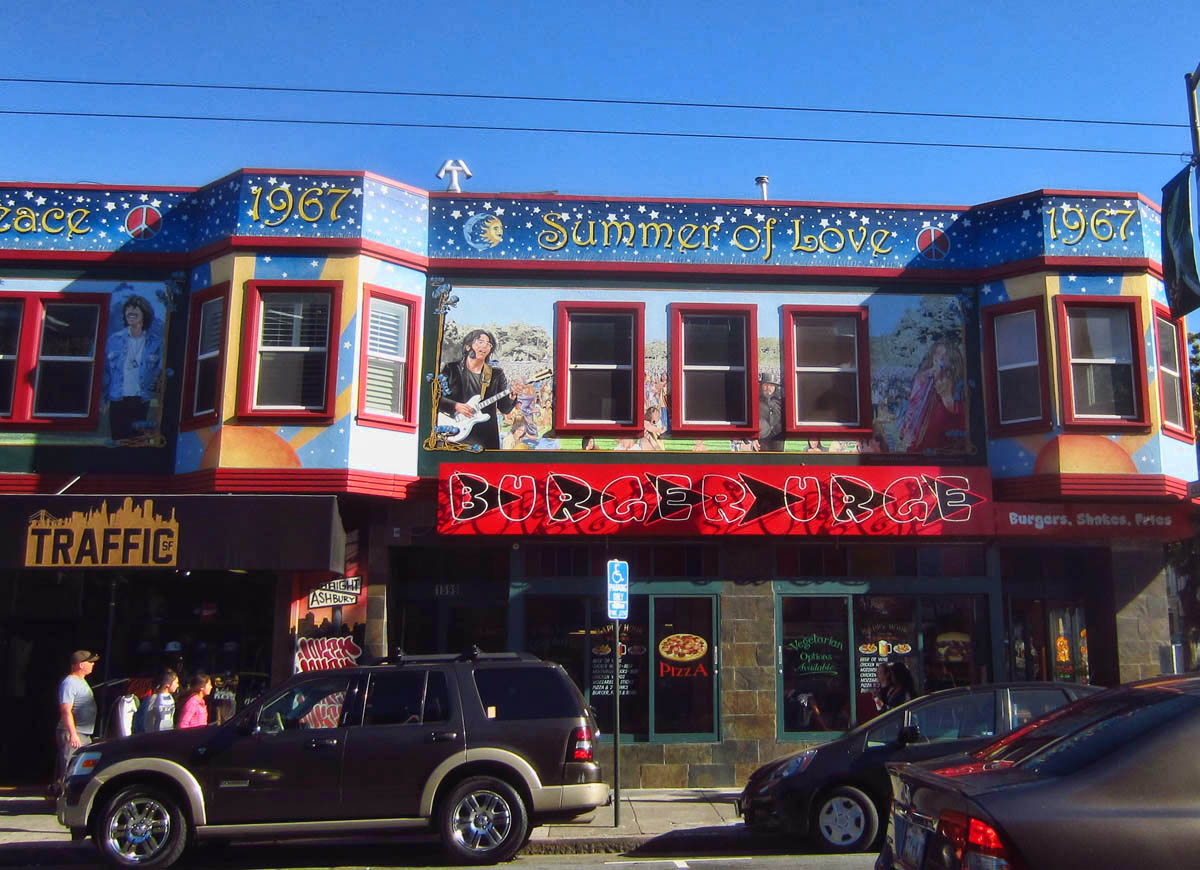 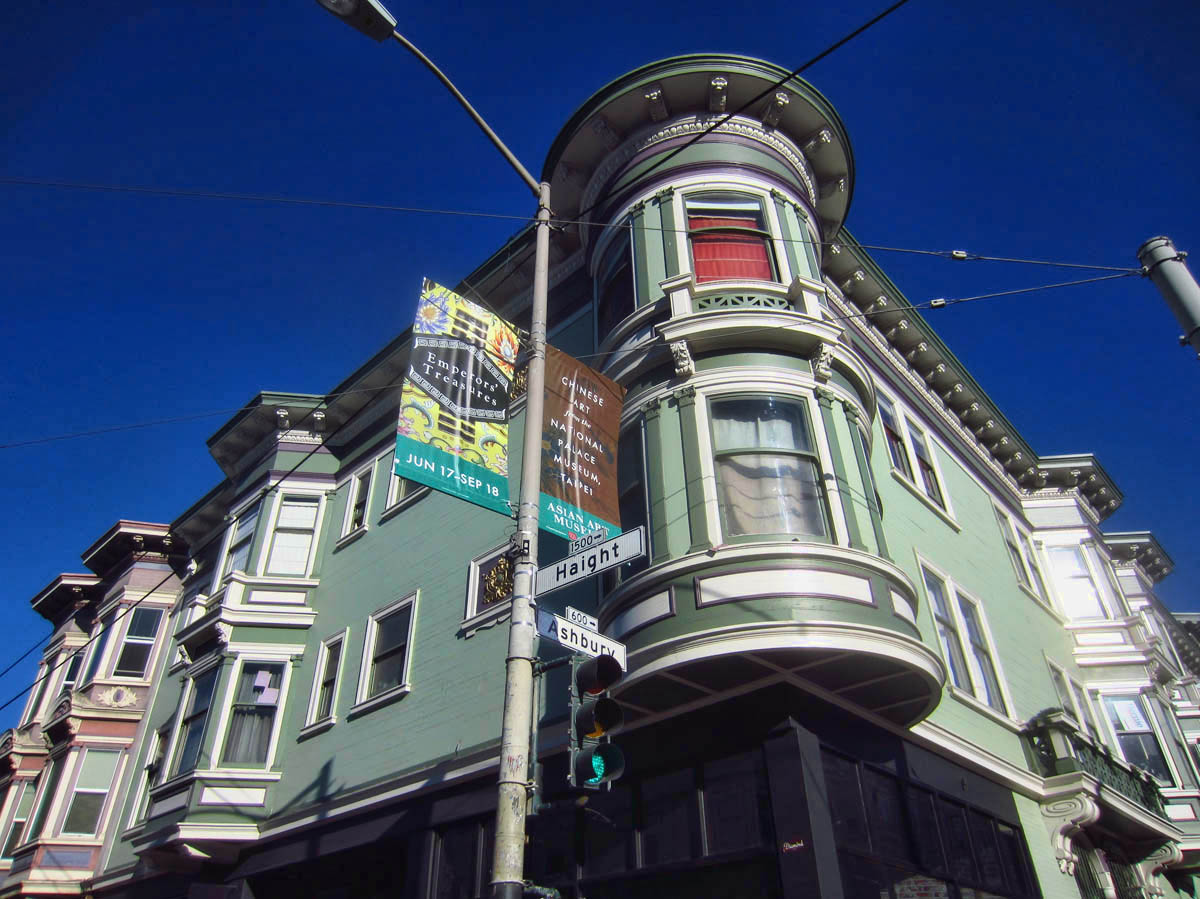 The famous corner of Haight Ashbury. 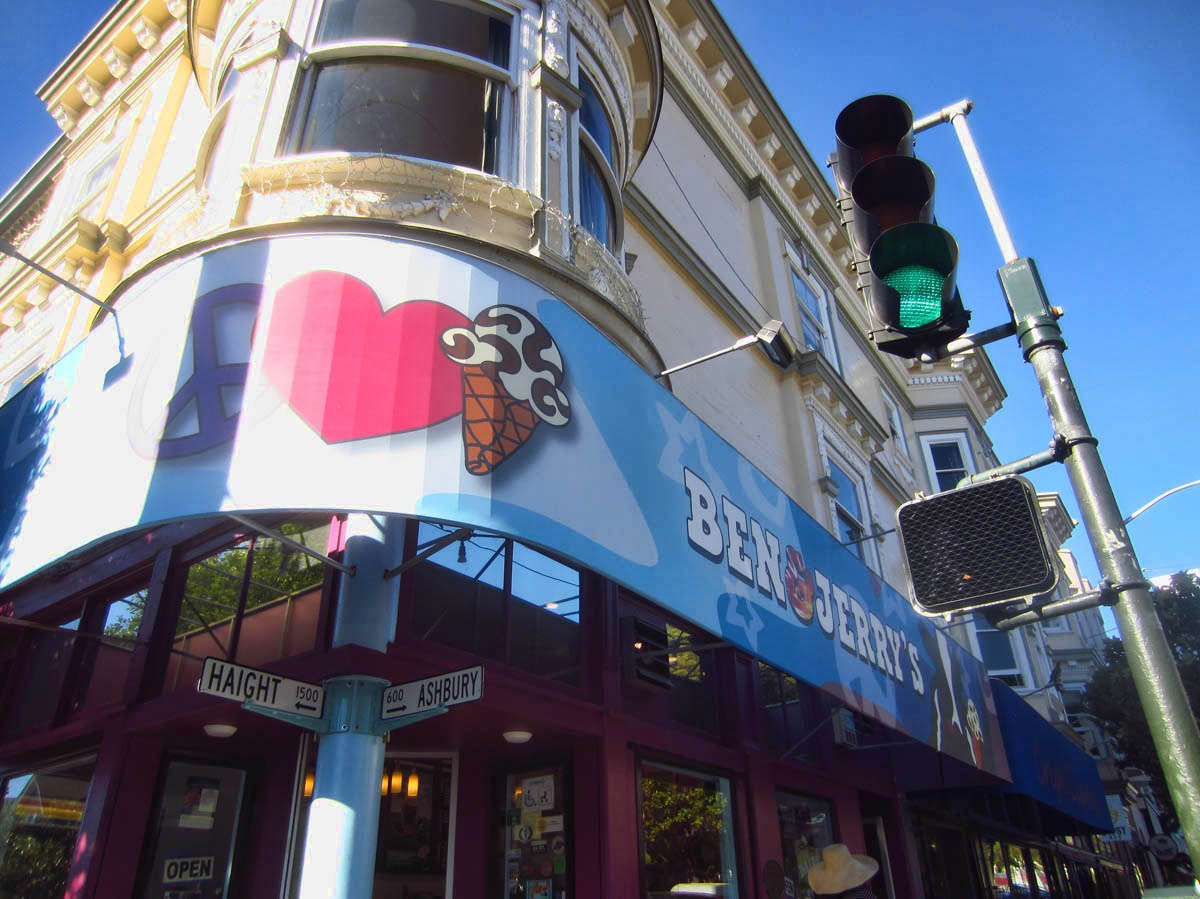 Ben and Jerry now occupy the opposite corner.

There are lots of “head shops” (smoking paraphernalia) and burger joints to satisfy the “munchies,” but my favorite shop is Amoeba Music, the independently owned music store on Haight Street occupying a former bowling alley. It’s the largest music store I have ever seen in my life! They claim more than 100,000 CDs, vinyl records, and cassette tapes. The walls are papered with old concert posters. Dylan. Janis. Monterey Pop, and Fillmore gigs too numerous to name. As I wander the aisles in awe, I realize my entire life of music can be found here in this one 20,000 sq ft store.

I make all the stops on “the walking tour of the stars.” I see buildings that were once inhabited by my music idols, now multi-million dollar renovated Victorian homes on the National Historic Register. 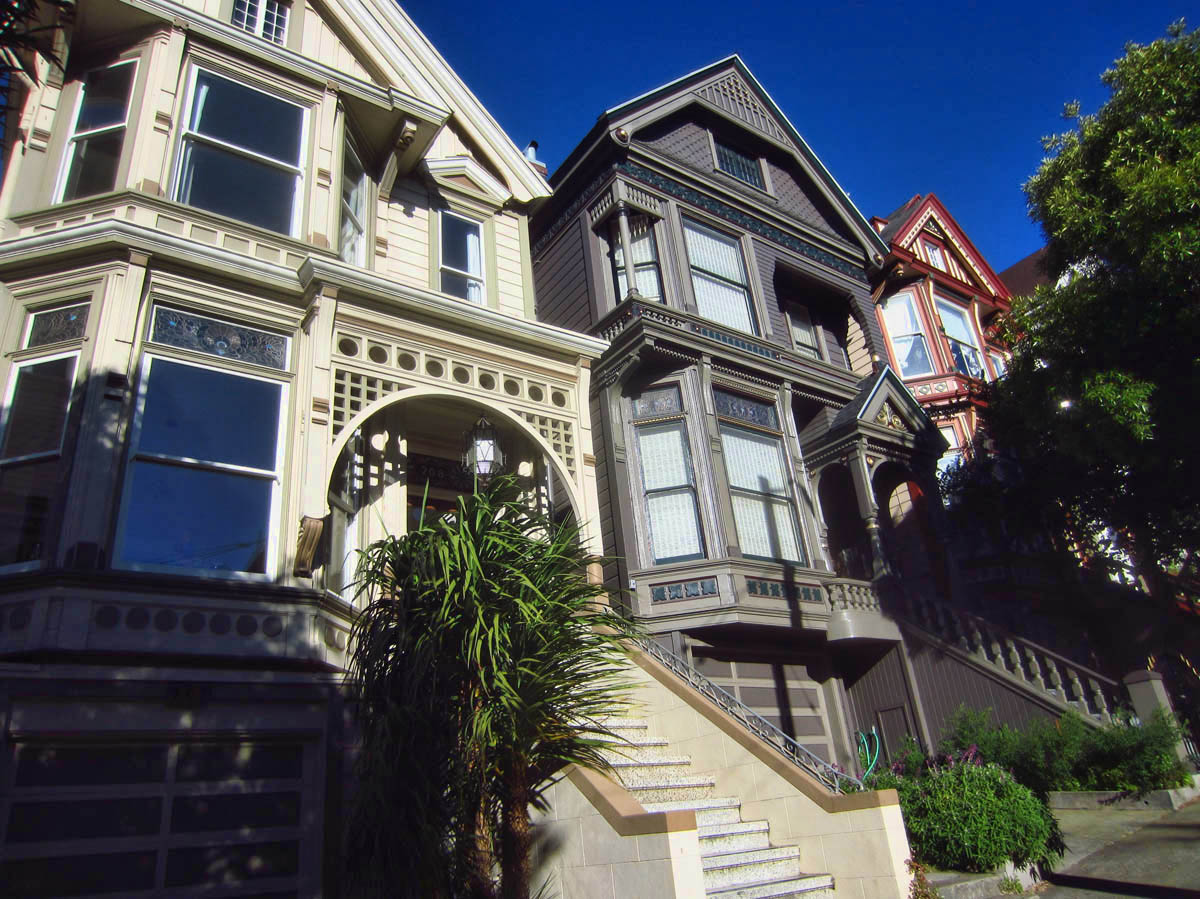 This dark gray house in the center is the “Grateful Dead House,” 710 Ashbury St, where the Grateful Dead band members lived. 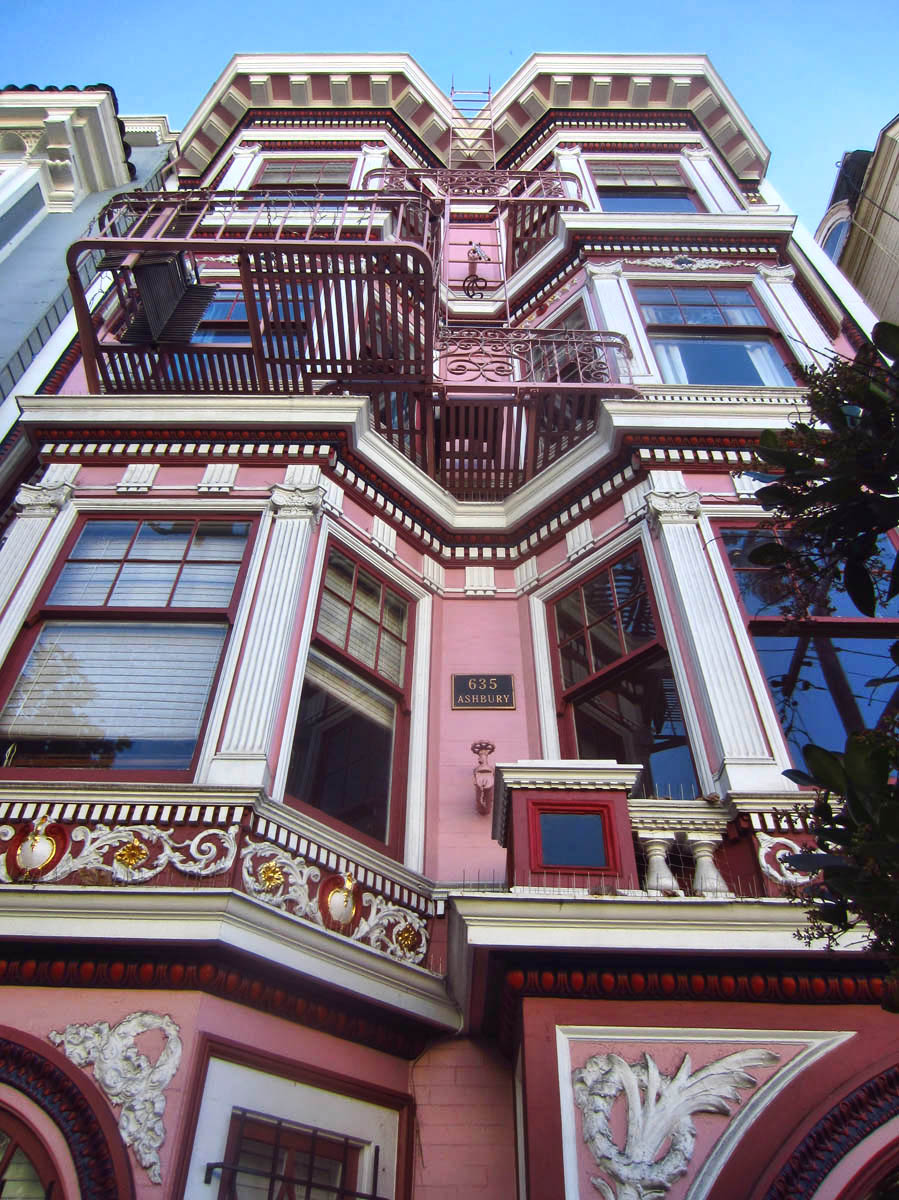 After a wander through Golden Gate Park (now filled with vagabonds of a different sort,) I make one last stop in the Haight. I pull up a bar stool in Ben and Jerry’s ice cream shop, overlooking that famous intersection. I reminisce back to “The Summer of Love” when I sat there in my parents 1966 Impala wearing a wreath of golden yellow and orange marigolds in my hair. It’s hot, and the windows are rolled down. As we wait for the light to change, a group of Hells Angels rolls up in the lane next to us, gunning their engines. One of them looks over at my Mom, quite a “looker” in her day wearing her teased-up hair and Foster Grants. He looks over and says, “Hey, Mama! How ‘bout a ride?” And all at once, I am crushed that he would choose my MOTHER over a flower-adorned budding young hippie such as myself! 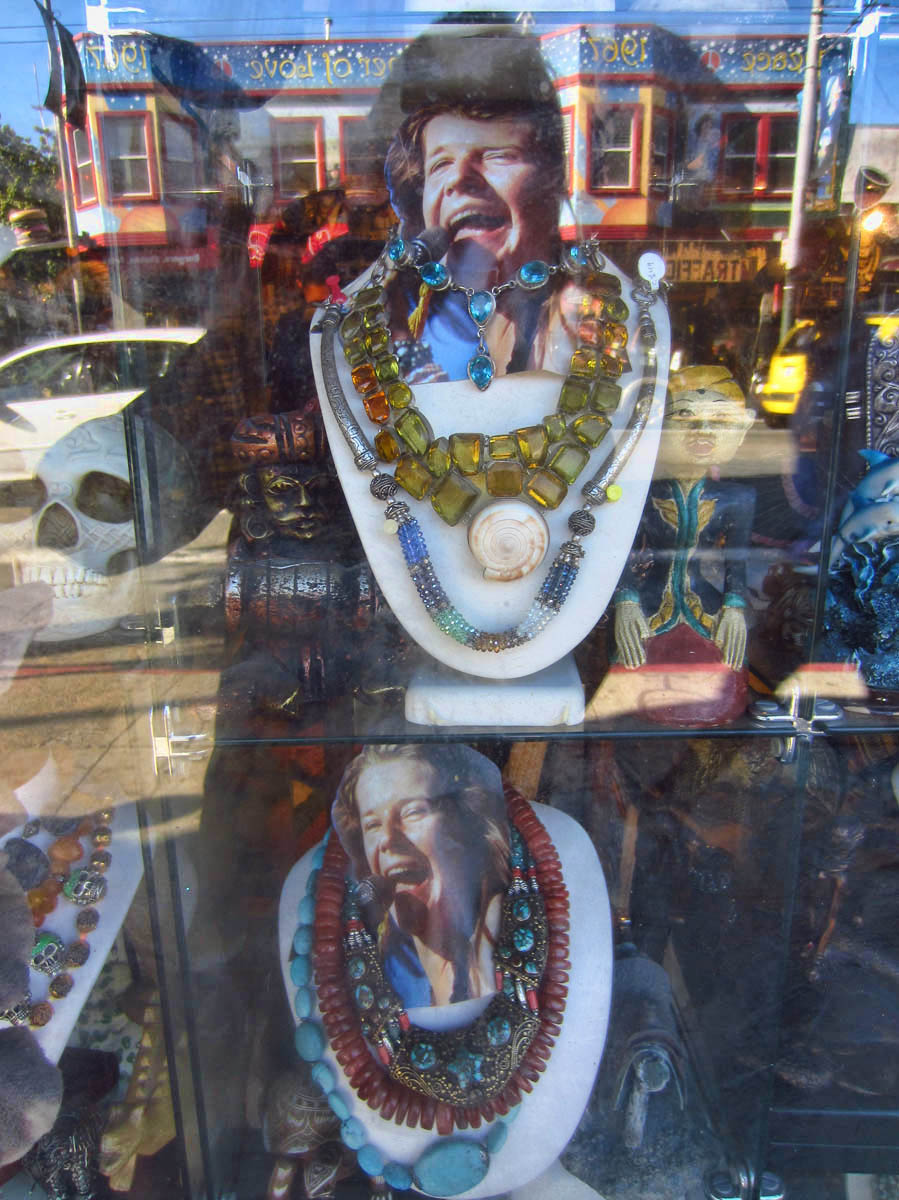 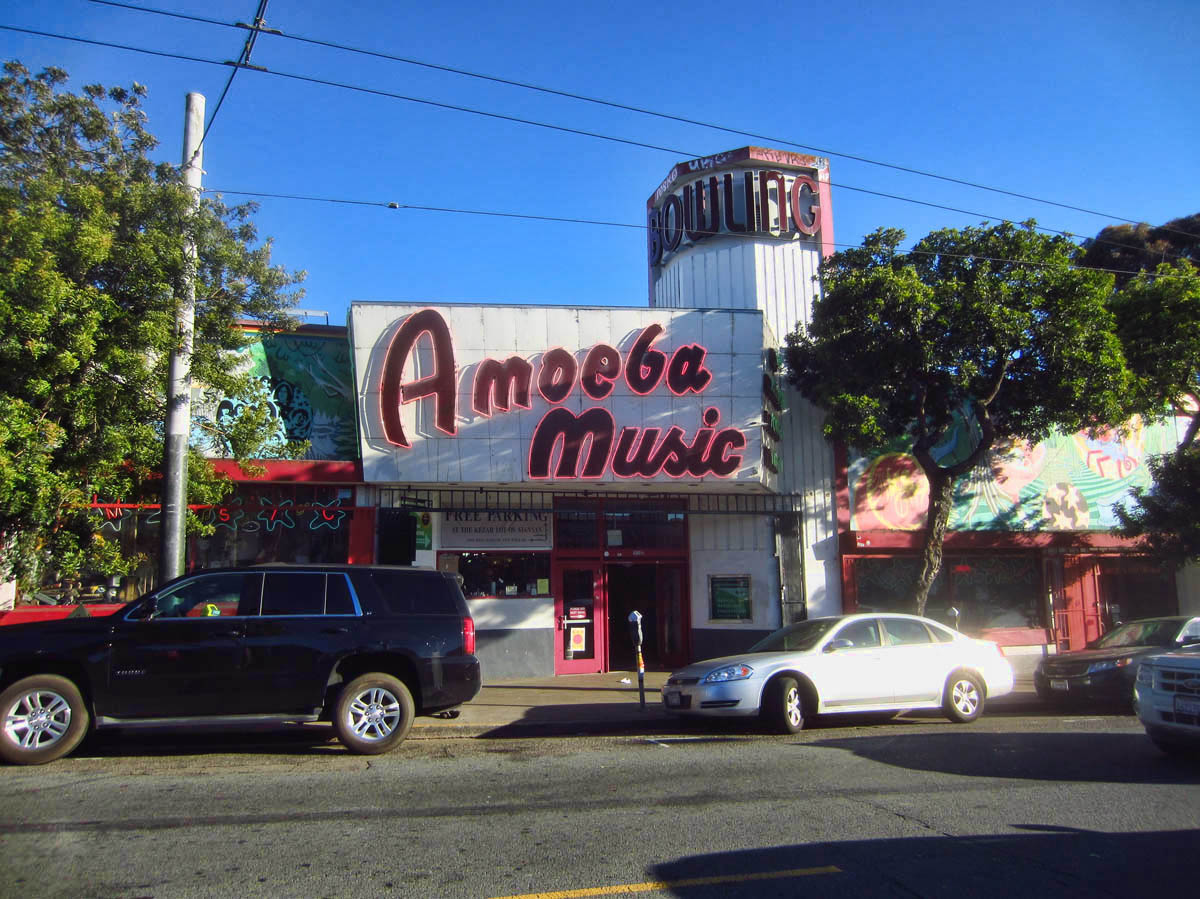 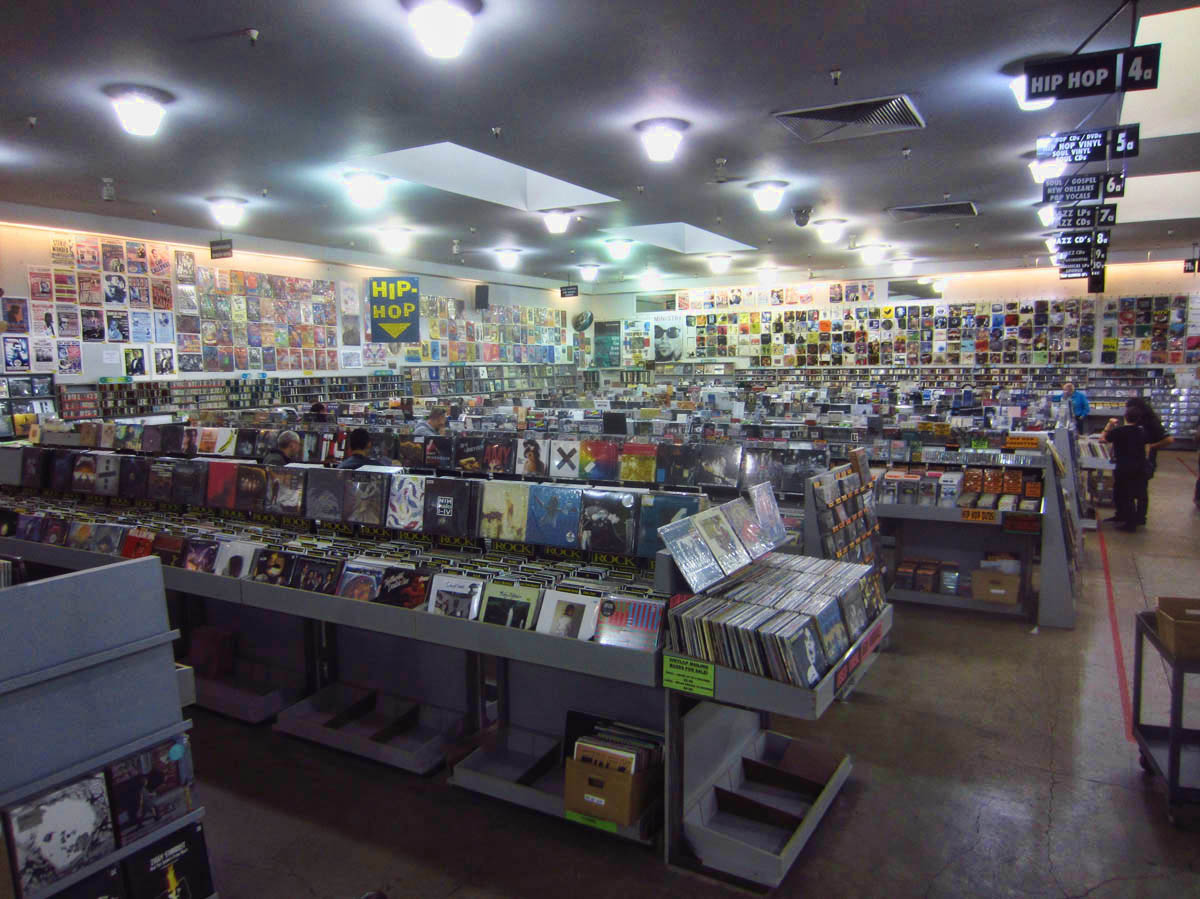 Every record I ever owned can be found in this 20,000 sq ft music store. This is only half. The other side is the same size.

I sit there on that barstool, eating my Cherry Garcia ice cream, and ponder how much music has shaped my life. Those “underground” magazines, the first and only FM radio station KFAD, and concerts like Woodstock and Monterey Pop are ingrained in the fabric of my life. Though a lot has changed, not much has changed. In my mind, I am still that budding young hippie, protesting the war, advocating for peace, and listening to Jimi and Janis on my headphones while longing for that 1967 Summer of Love. 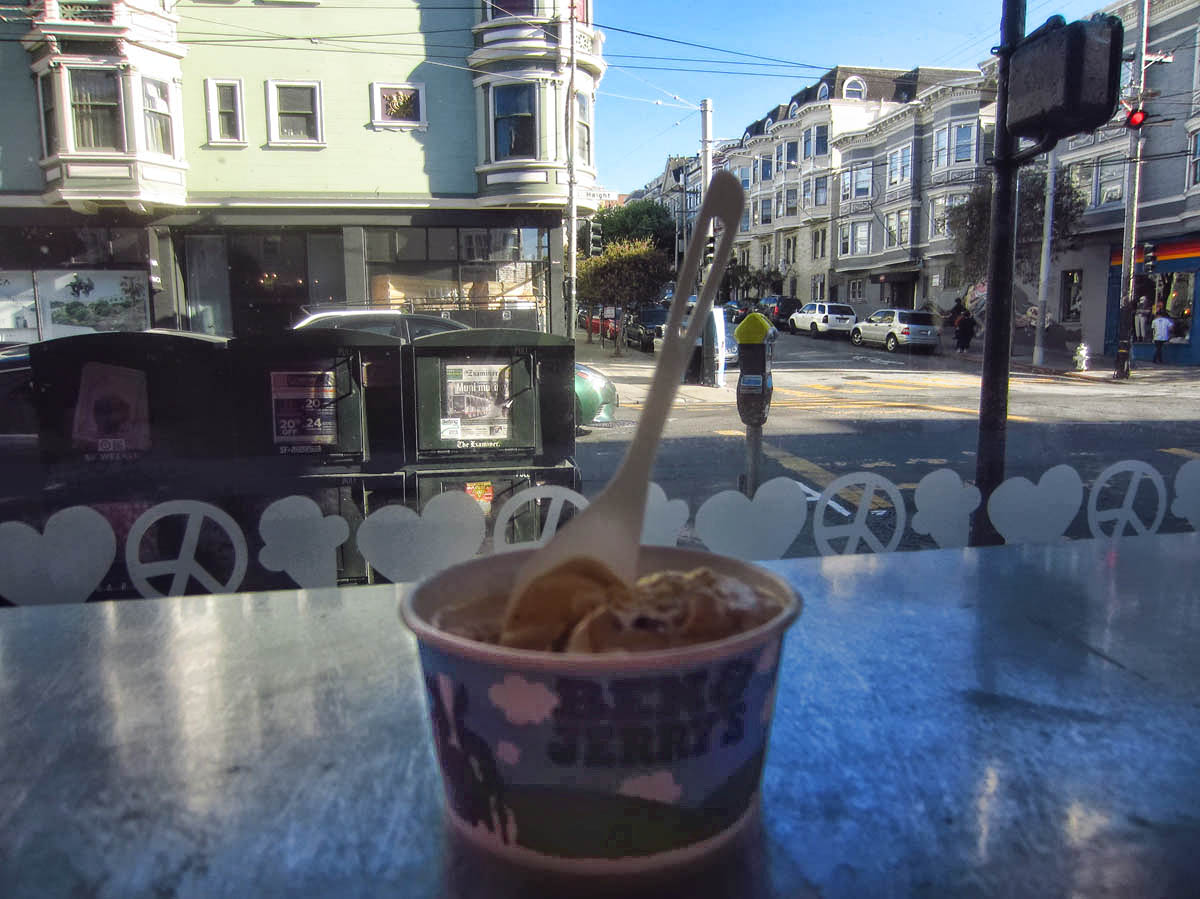 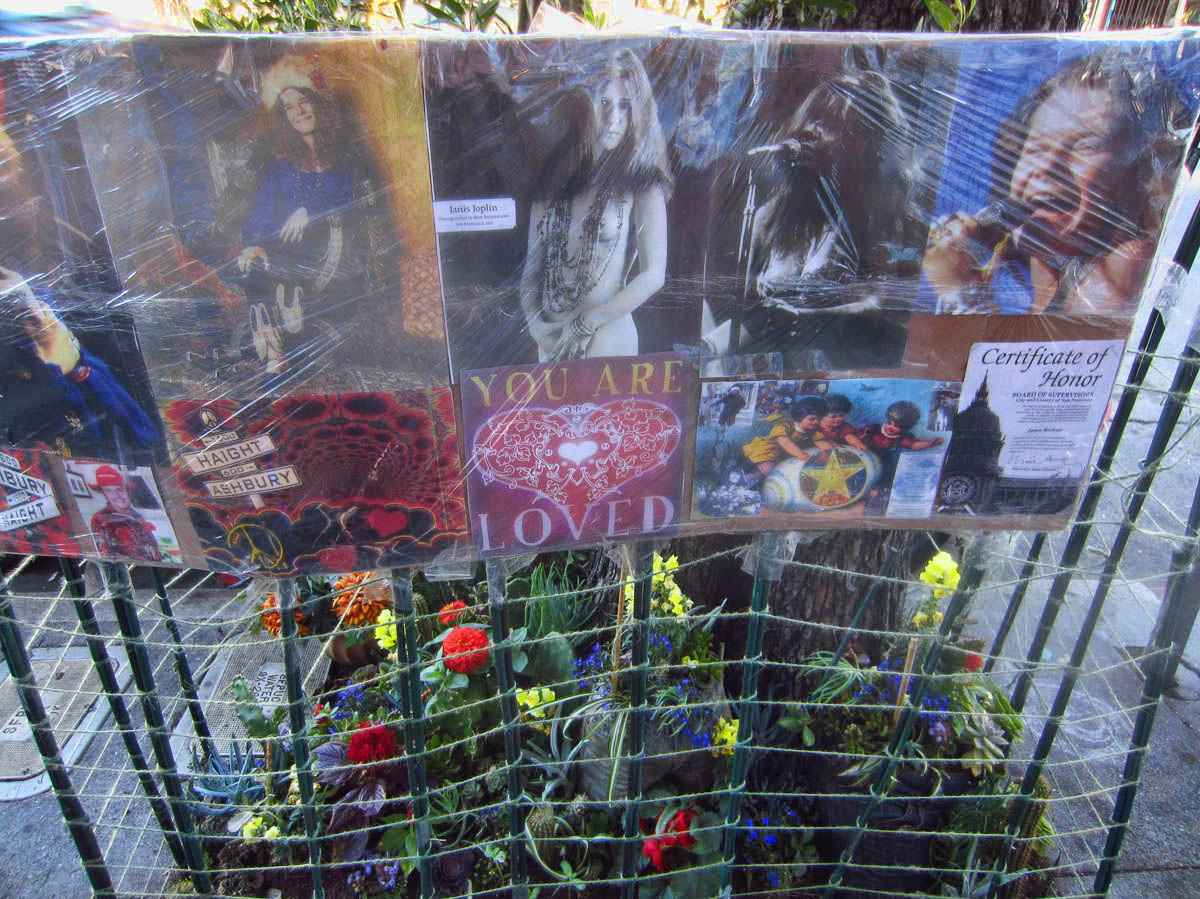 Rudimentary shrine to Janis Joplin built around a light pole. 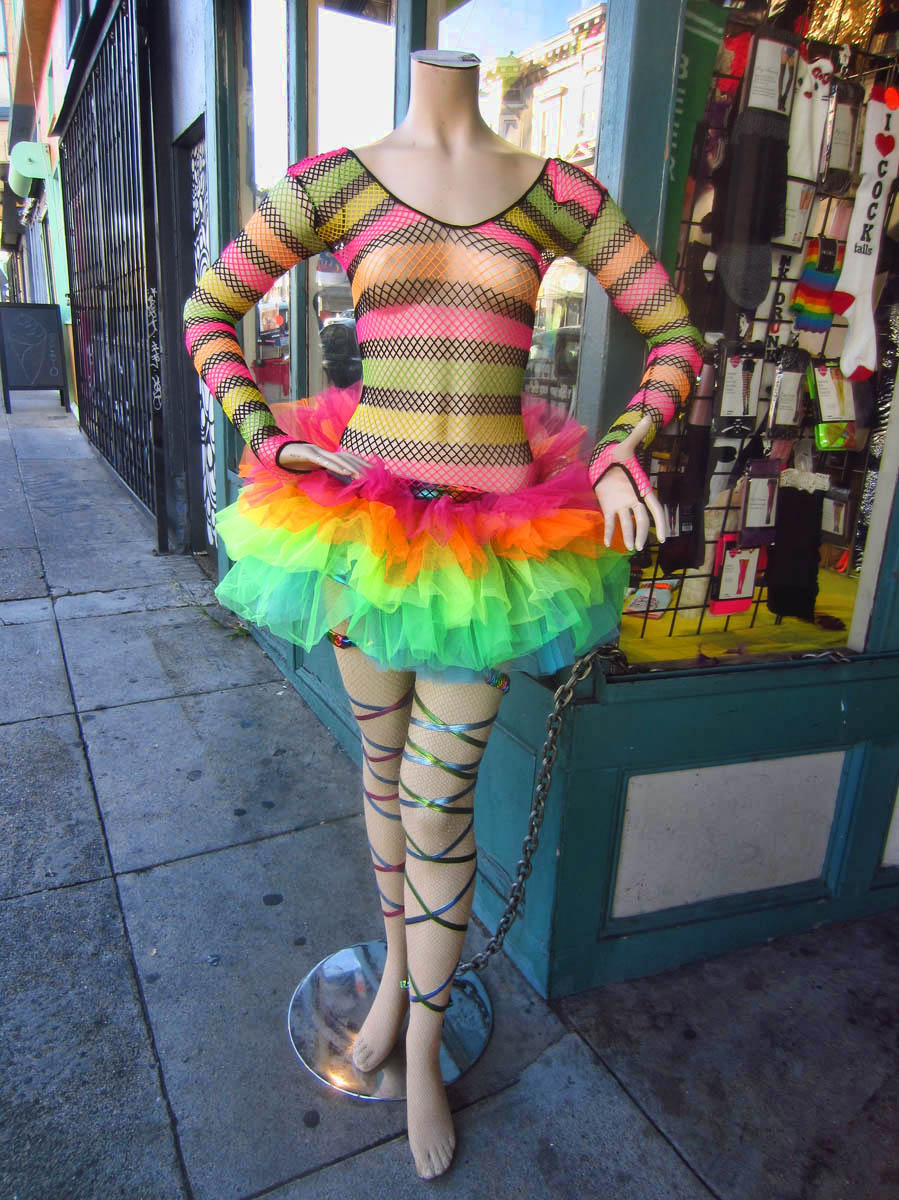 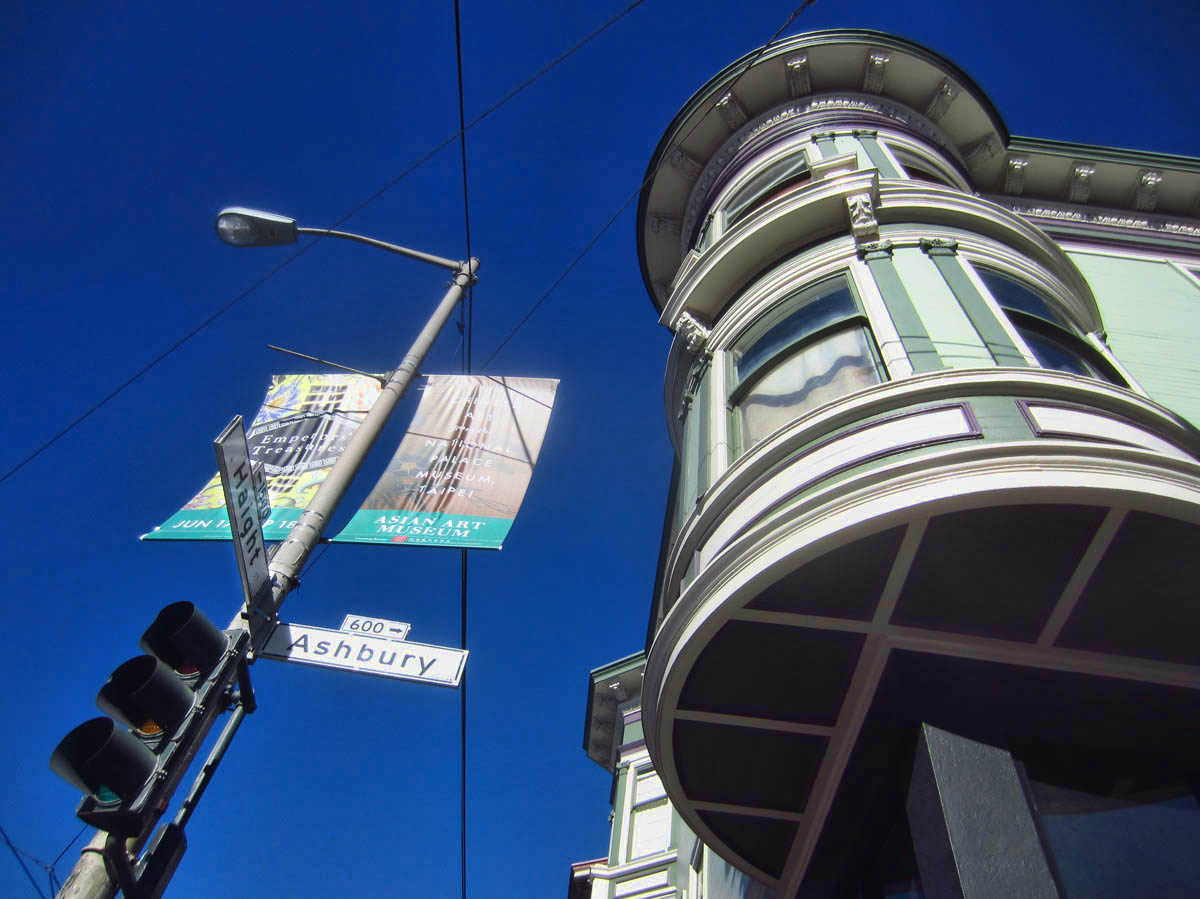 But now it’s time to get out of San Francisco, and I have a decision to make. Will I brave the downtown traffic to satisfy my desire to drive the Winnie across the Golden Gate Bridge? It’s Friday morning after POTUS Obama spent the night in downtown San Francisco last night. I go online to whitehouse.gov to check his schedule, and learn he is leaving early for San Jose. The Gay Pride weekend is sure to ramp up by early afternoon. I figure I’ve got one small window of opportunity around 10:30am, just after the morning commute and before the weekend festivities begin. So I decide to make a break for it. To quote the famous comic character Oat Willie from the head shop on 29th and Guadalupe in Austin, I say, “Onward: through the fog!” 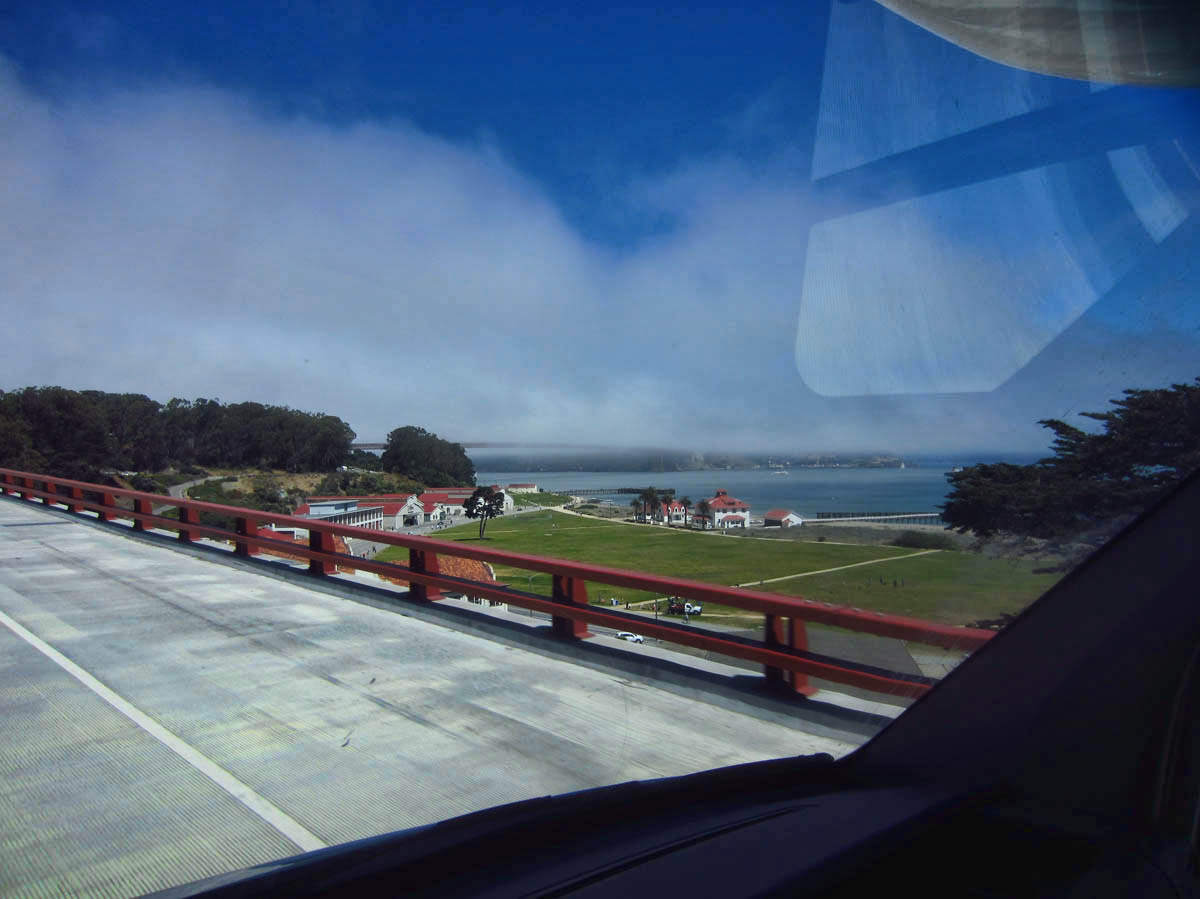 It’s a beautiful blue sky day as I drive the Hwy 1 ramp to the bridge. But see that cloud on the horizon? That’s the Golden Gate Bridge! 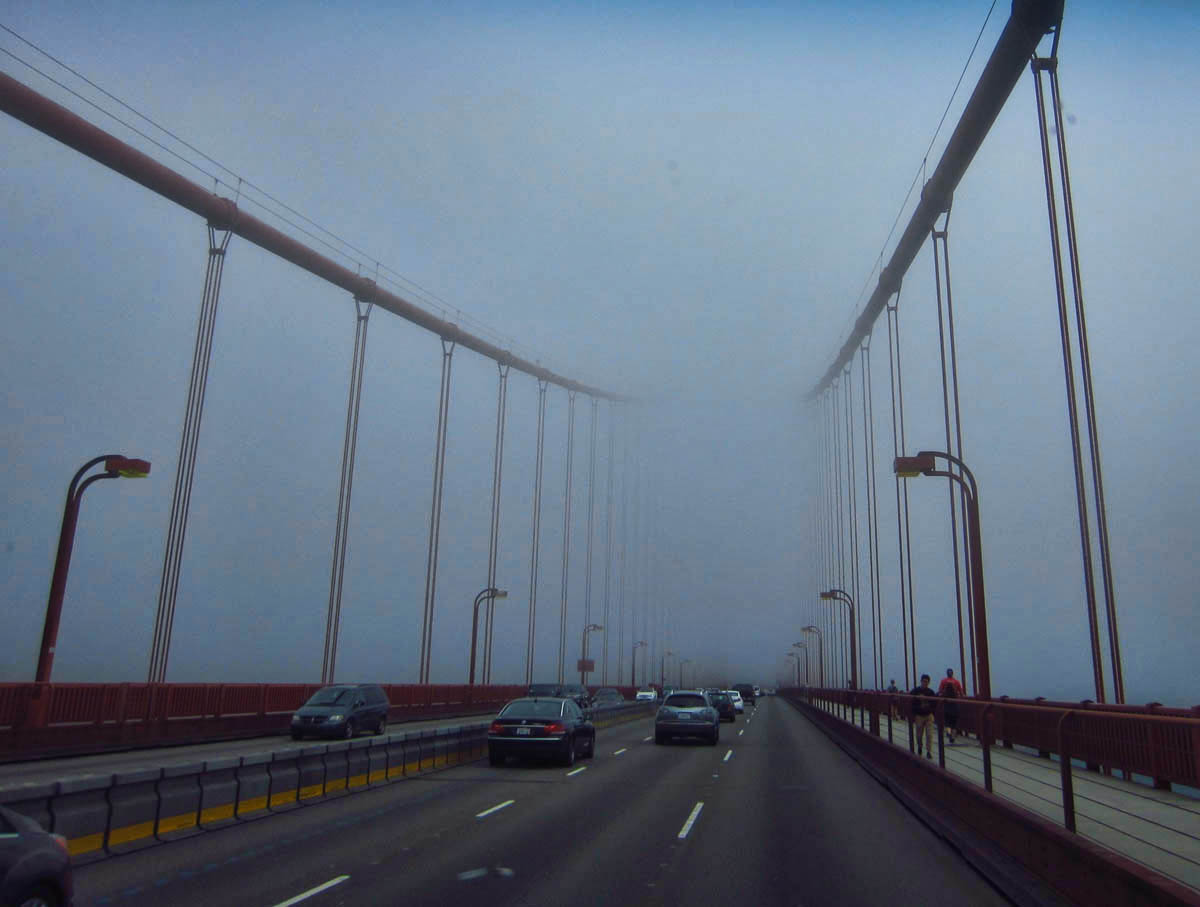 I am grateful for my previous days bike ride across the bridge when it was so clear! 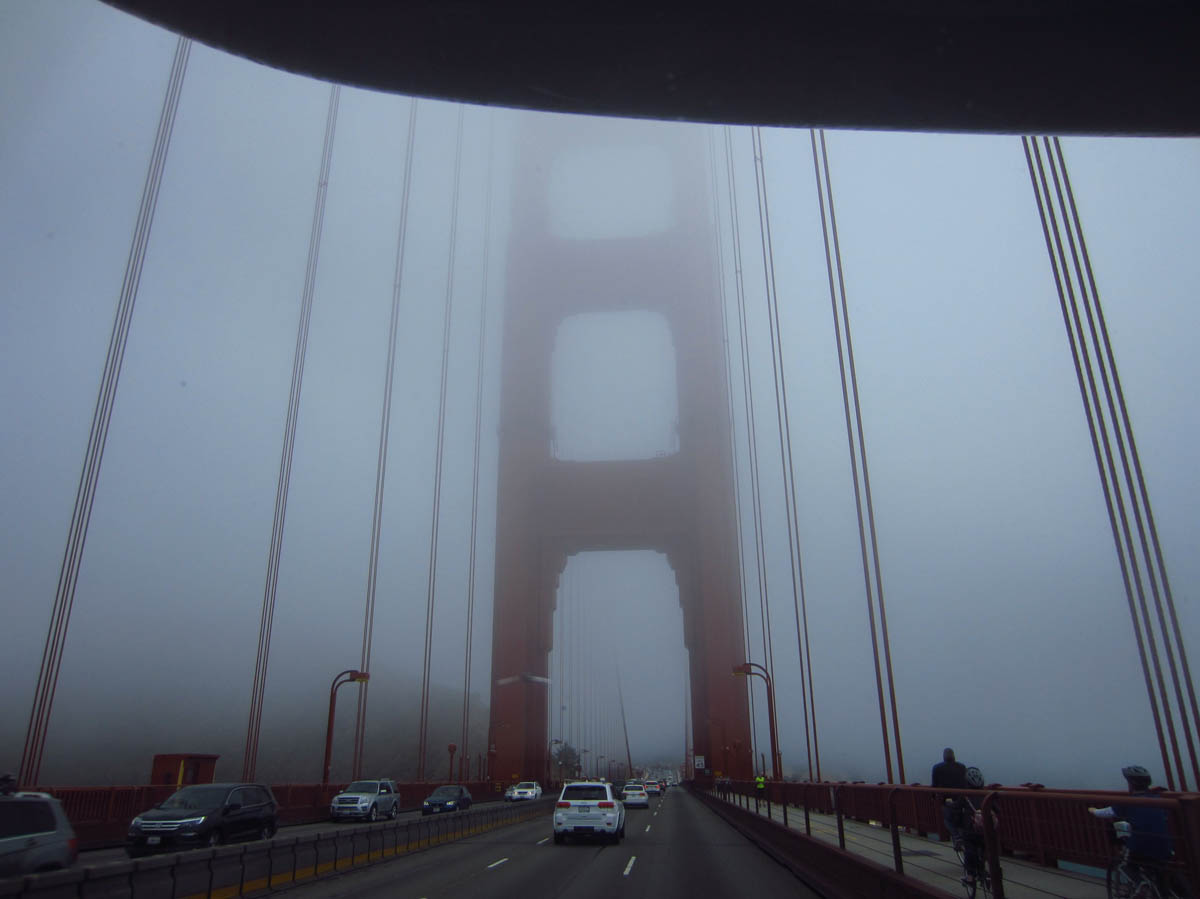 Advection fog forms when warm moist air of land moves over cold upwelling of water. At least I am not tempted to take my eyes off the road!