After four straight back to back visits in National Parks, I am in bad need of a “city fix.”   It just so happens that one of my favorite cities lies in my direct northerly path, San Francisco. 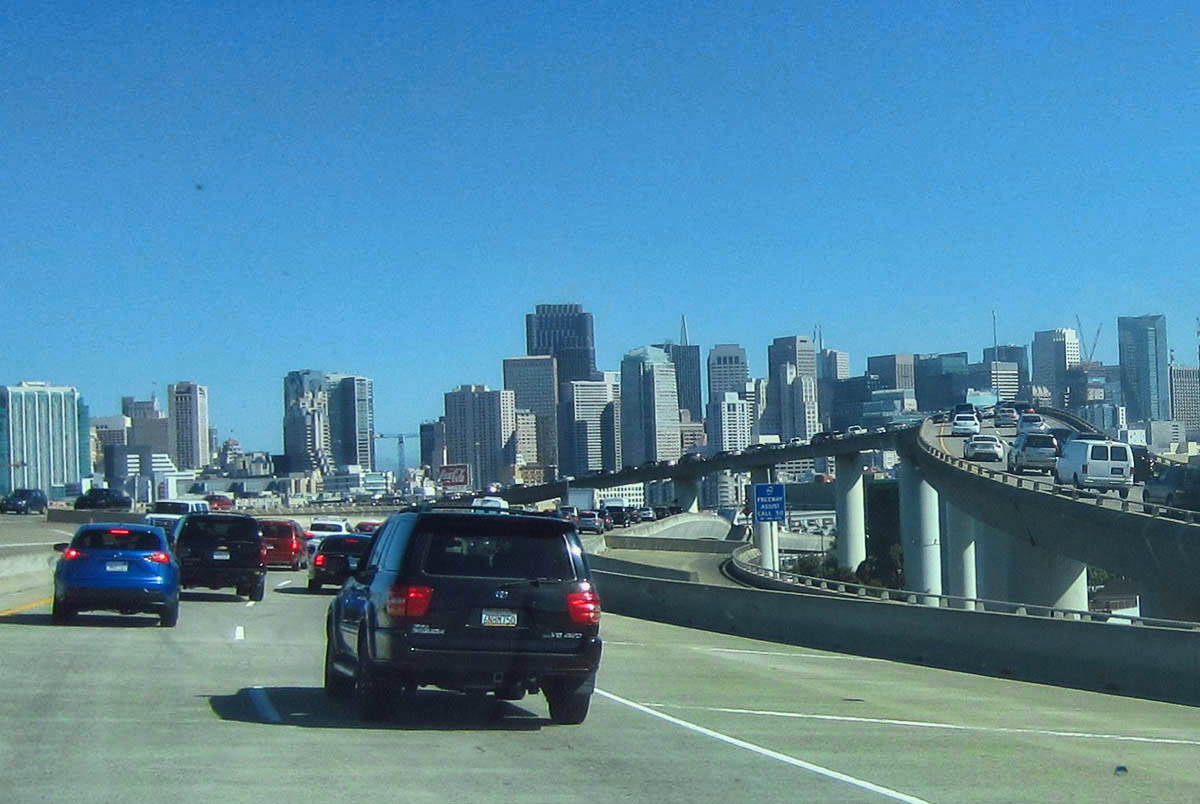 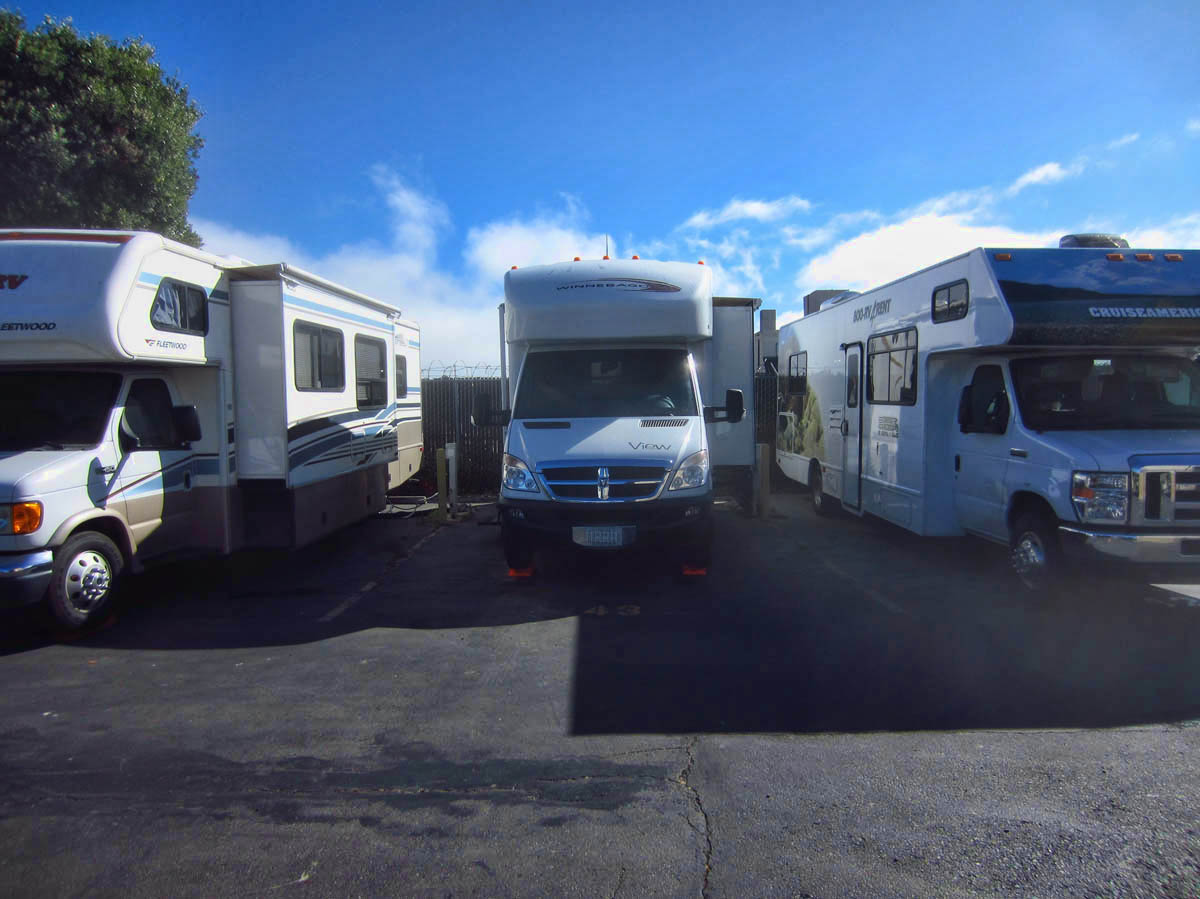 Here’s what $89 will get you in the city. Better make it fast!

Finding a place to park in San Francisco is an exercise in futility for a car, let alone an RV.  Parking rates range from $3 per hour to three times that much, so it’s no wonder that I have to pay more to park the RV in San Francisco than I have ever paid in my RVing life!    Prior to my stay at Candlestick RV Park, my highest per night parking fee had been Liberty Harbor Marina in Jersey City at $85 per night, just a short boat ride to the Statue herself.   Candlestick RV Park topped that at $89 per night  (and that’s with a 10% discount for cash!)  The difference is when I stayed at Liberty Harbor for three weeks, I was still a Corporate Slave.   I live a little more austerely now that I am a retiree.  Candlestick will eat through an entire weeks budget in only two nights!   So I have to make my day and a half there count. 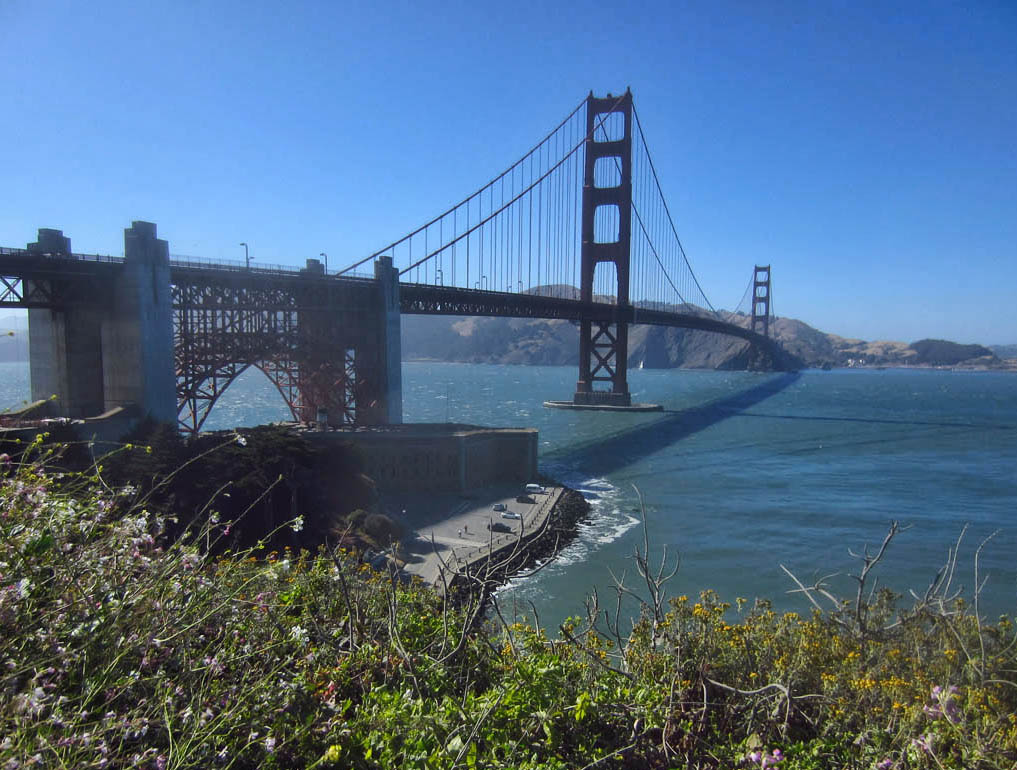 The Golden Gate Bridge was actually named for the strait it spans, not the color. The color is “International Orange.” 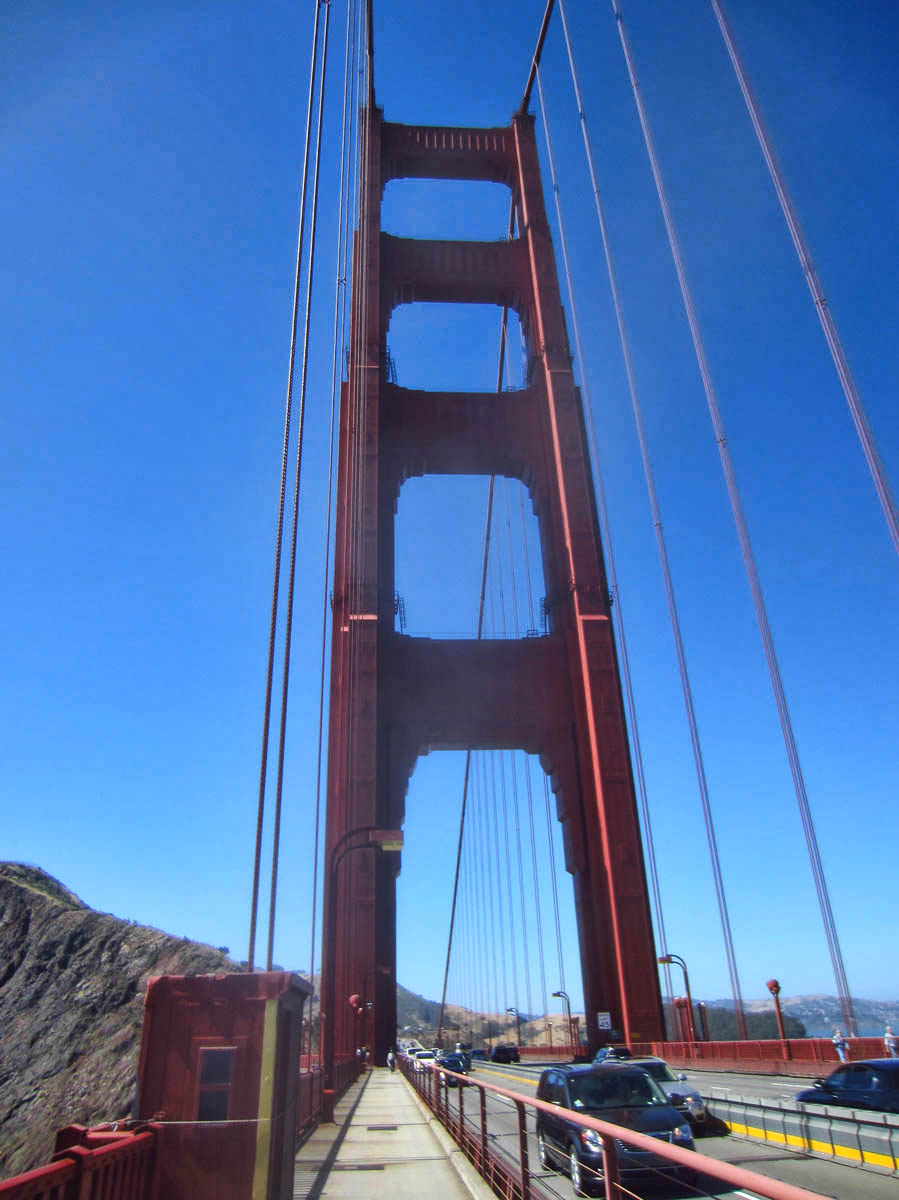 The bridge was built in 1937. At the time, it was the longest suspension bridge in the world, a title now held by Japan. 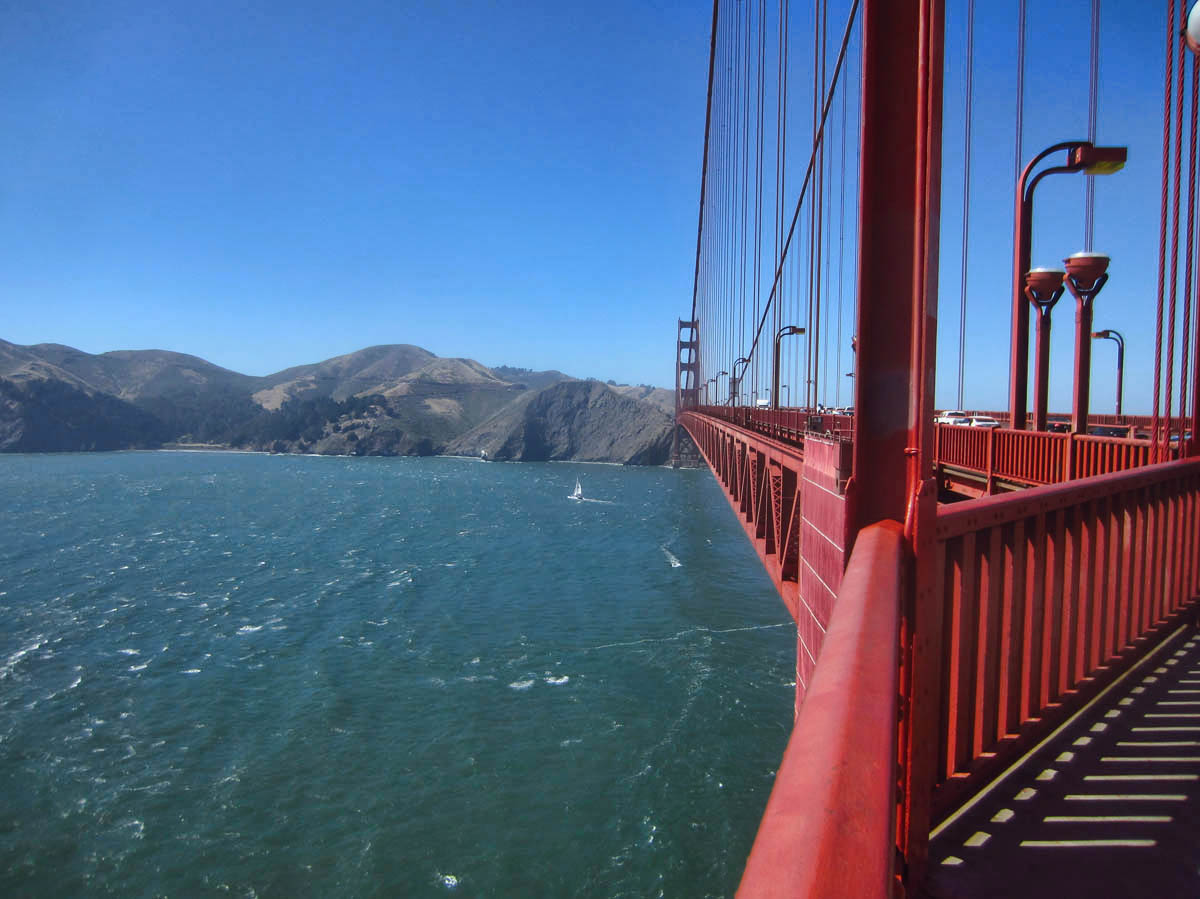 It’s an extremely windy day, which makes me envious of the sailboat passing below. The bridge has been closed due to weather only 3 times, each instance when the wind exceeded 65 mph.

Plans for San Francisco include some modern day desires, as well as to revisit some of the sites I had seen on previous trips, including one of my earliest memories of a road trip with my family.  First visit was at four years old, and then again at twelve, when my dearly departed younger brother Stephen, then five years old, raised up and exclaimed (after my father had driven us here all the way from Texas,) “What’s so special about THIS bridge?!” 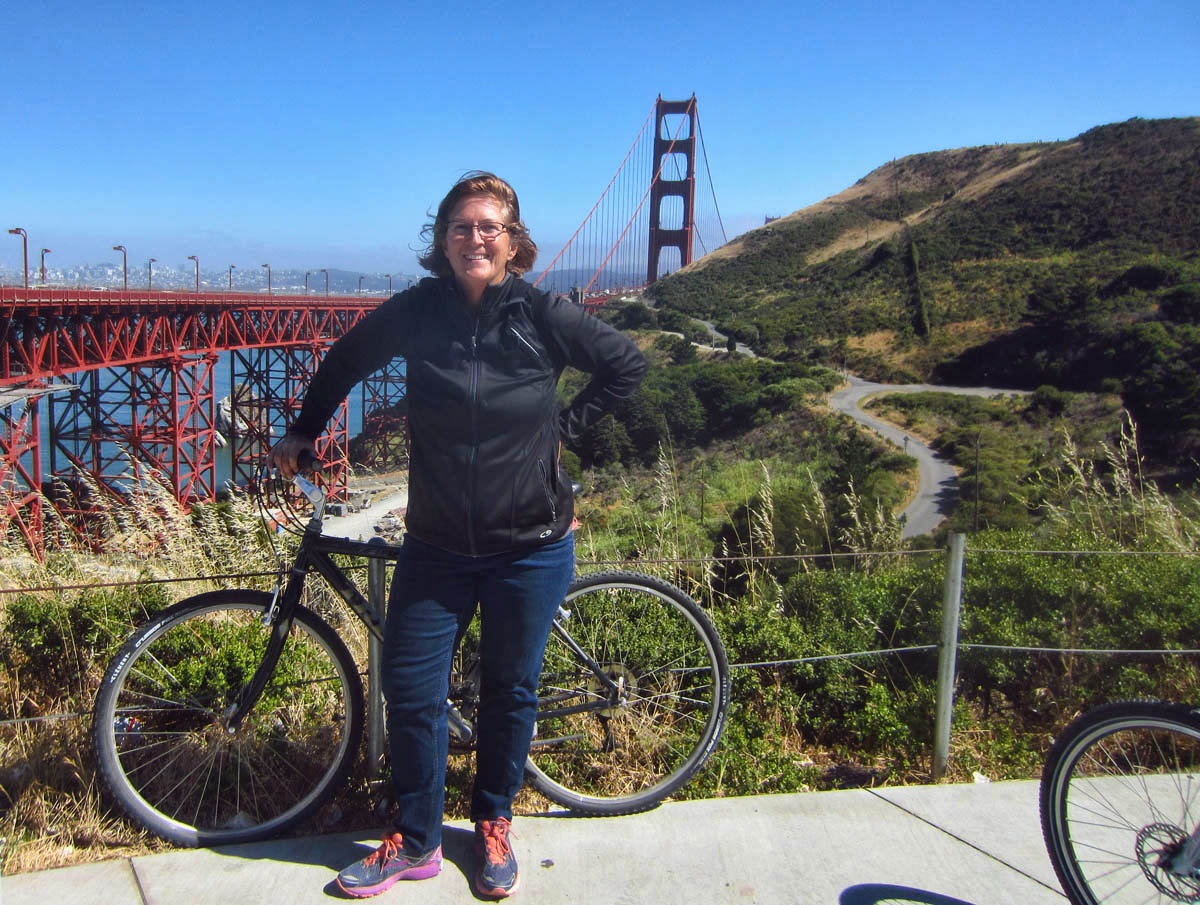 I am grateful for the dedicated bike lane, as I forgot my helmet! 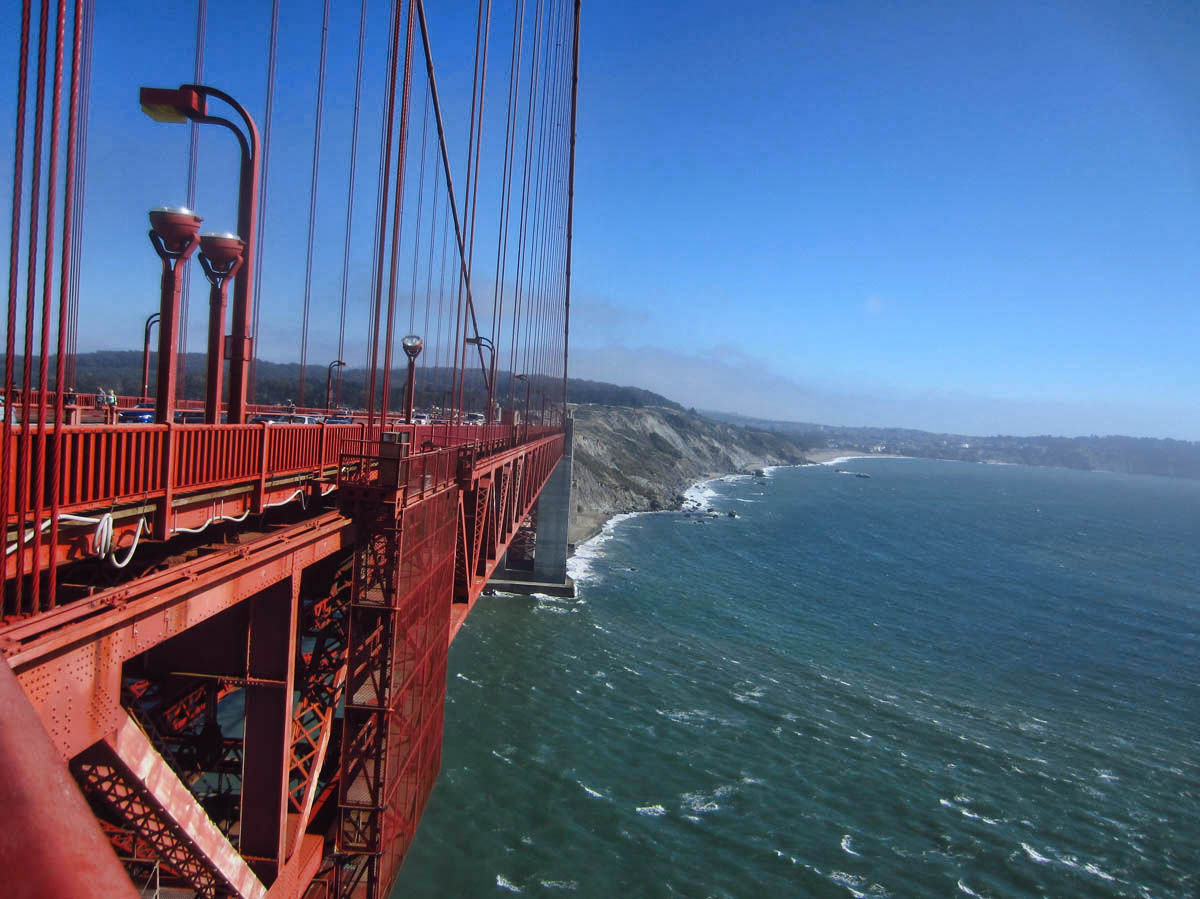 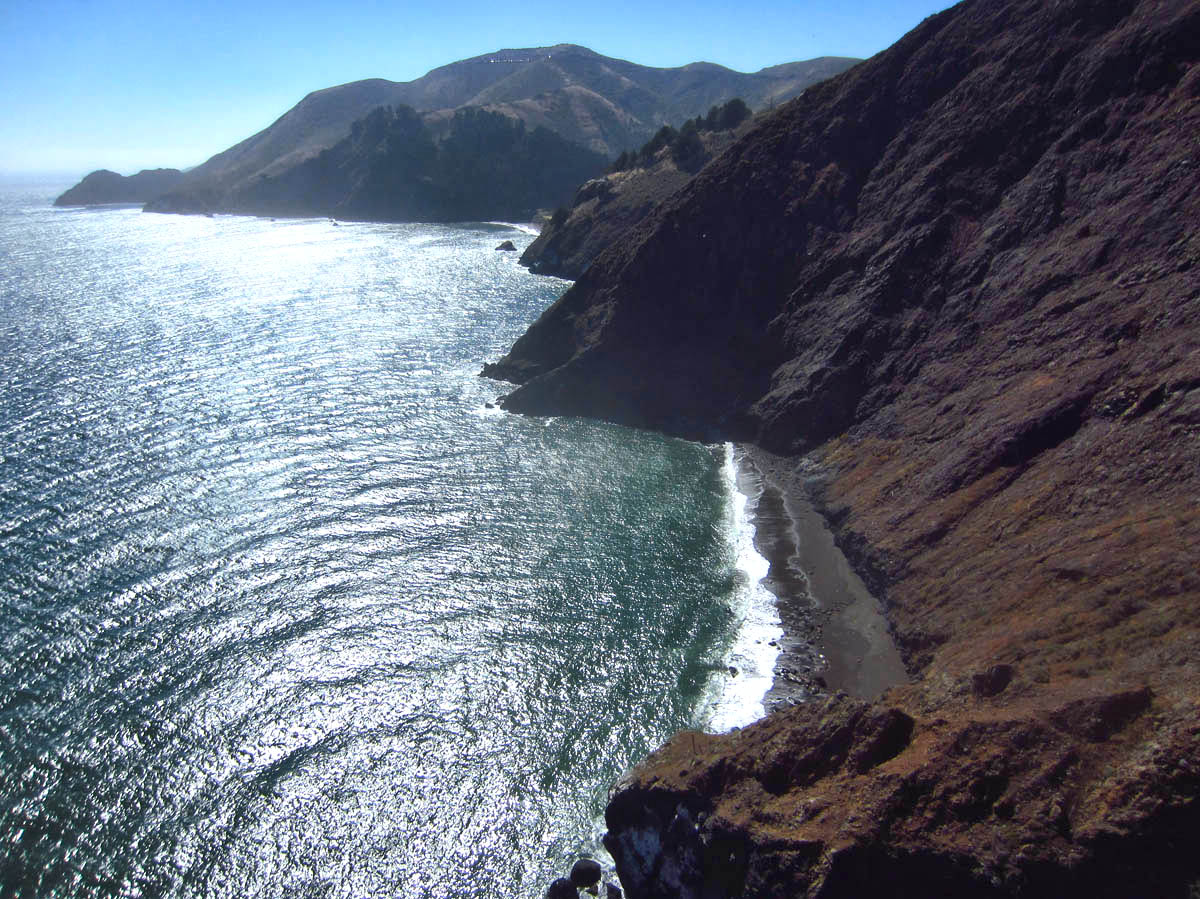 The bridge can sway up to 28 ft in extreme winds.

On my “modern day” list of things to do is determine if I have the guts to drive the Winnie across the Golden Gate Bridge.   It’s not the bridge that scares me, but following Hwy 101 through downtown San Francisco!  In doing research on the route, I discover there is now a dedicated bike path across the bridge.  What fun!   Not only can I experience the bridge “up close and personal,” but it will also enable me to do some reconnaissance.  Depending on the route, I will make a determination of whether to head north by way of the bridge or go around. 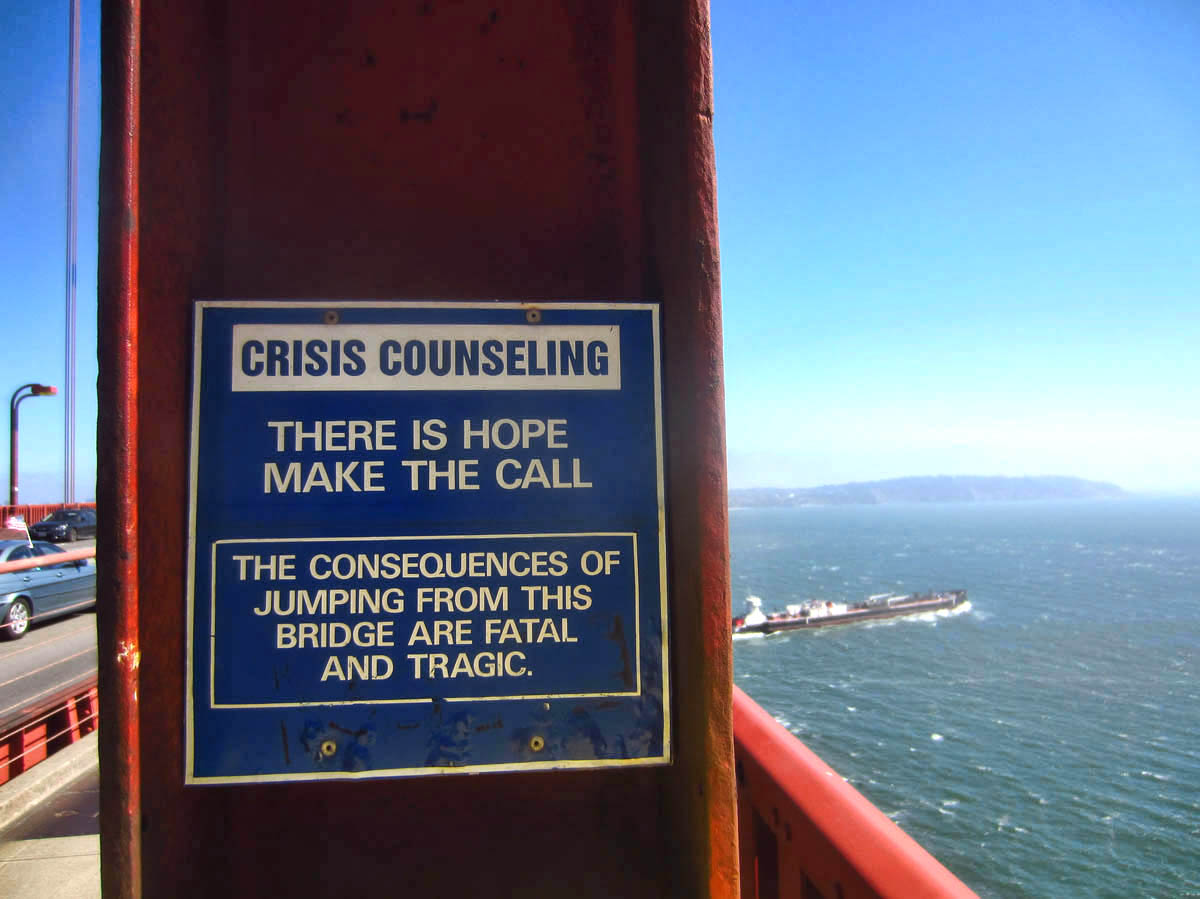 There have been over 1,500 suicides from the bridge. 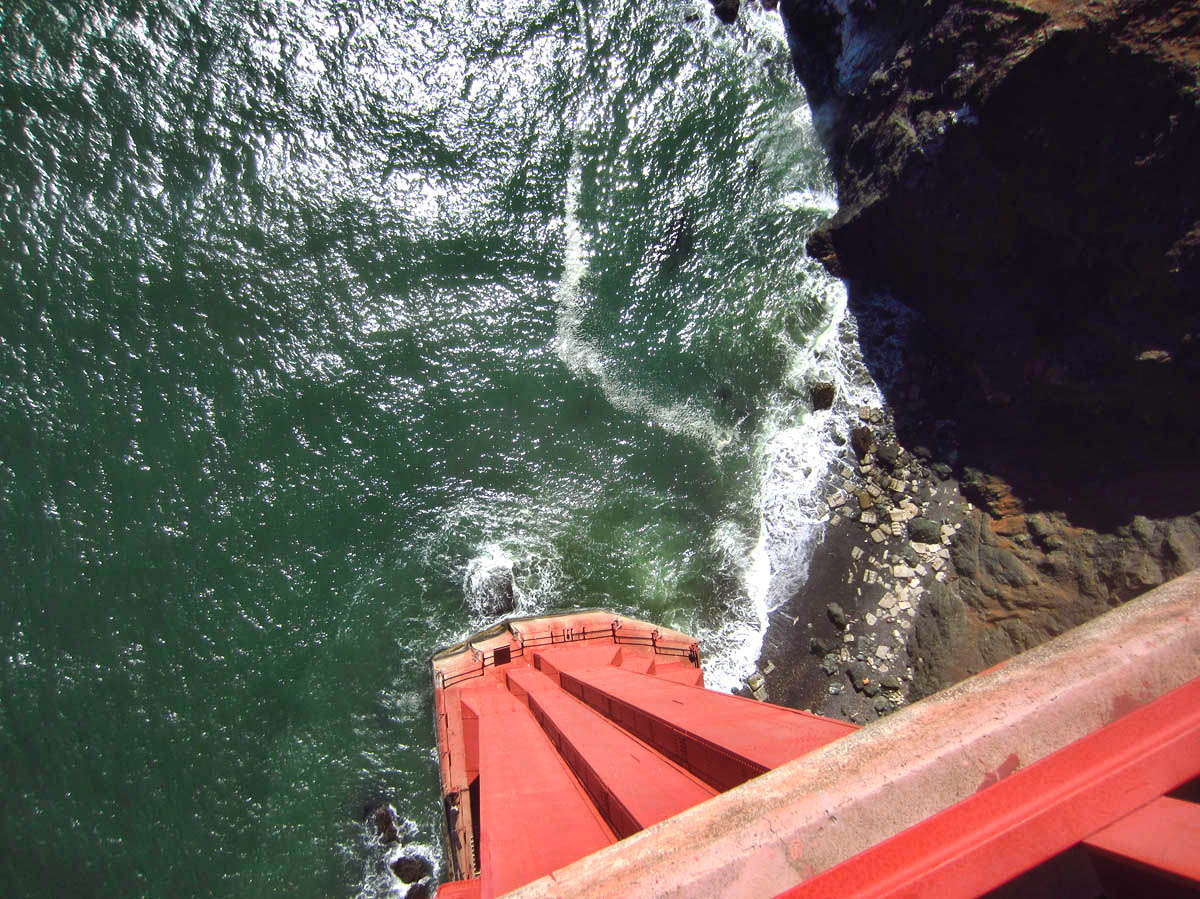 It’s approx 220 ft down to the surface, depending on tides. 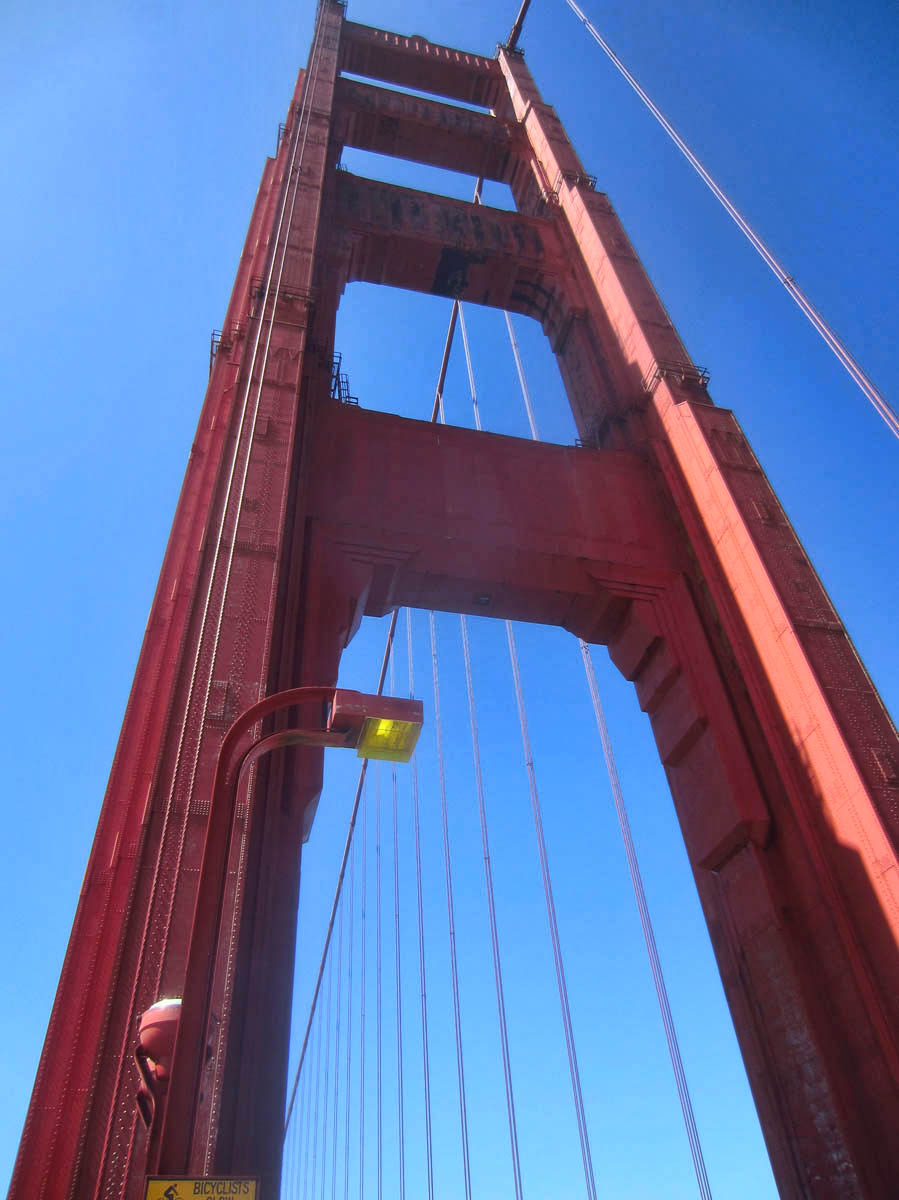 There are two towers, each 746 ft with Art Deco design.

It’s a perfect day for the bike ride across the bridge, with the exception of the wind.   There are a couple of times when I feel like I am going to blow over.  Thankfully I am on the windward side of the railing!  I see lots of RVs crossing the bridge, but again, it’s not the bridge as much as it is getting across downtown San Francisco!

There are two things I miss about living in the city, so my plan is to revisit both of them. One is the level of frenetic energy that comes from a thriving, pulsing environment, and the other is good ethnic food. I tackle the first by spending the morning in the Financial District. After working on Wall Street for 10 years, you can take the girl out of the navy suits and pumps, but you can’t take the Financial District out of the girl. I know this sounds bizarre for someone who seeks solitude and wilderness at every opportunity. But walking through the concrete canyon walls in a sea of anonymity offers a different kind of solitude amid a wilderness. Those years of living and working in Manhattan were some of the best of my life. That energy is a part of the fabric of my history, and it feels familiar. So to grab a latte to go and jaywalk through the bustling streets of downtown makes me feel just as “alive” as hiking to the top of a peak. 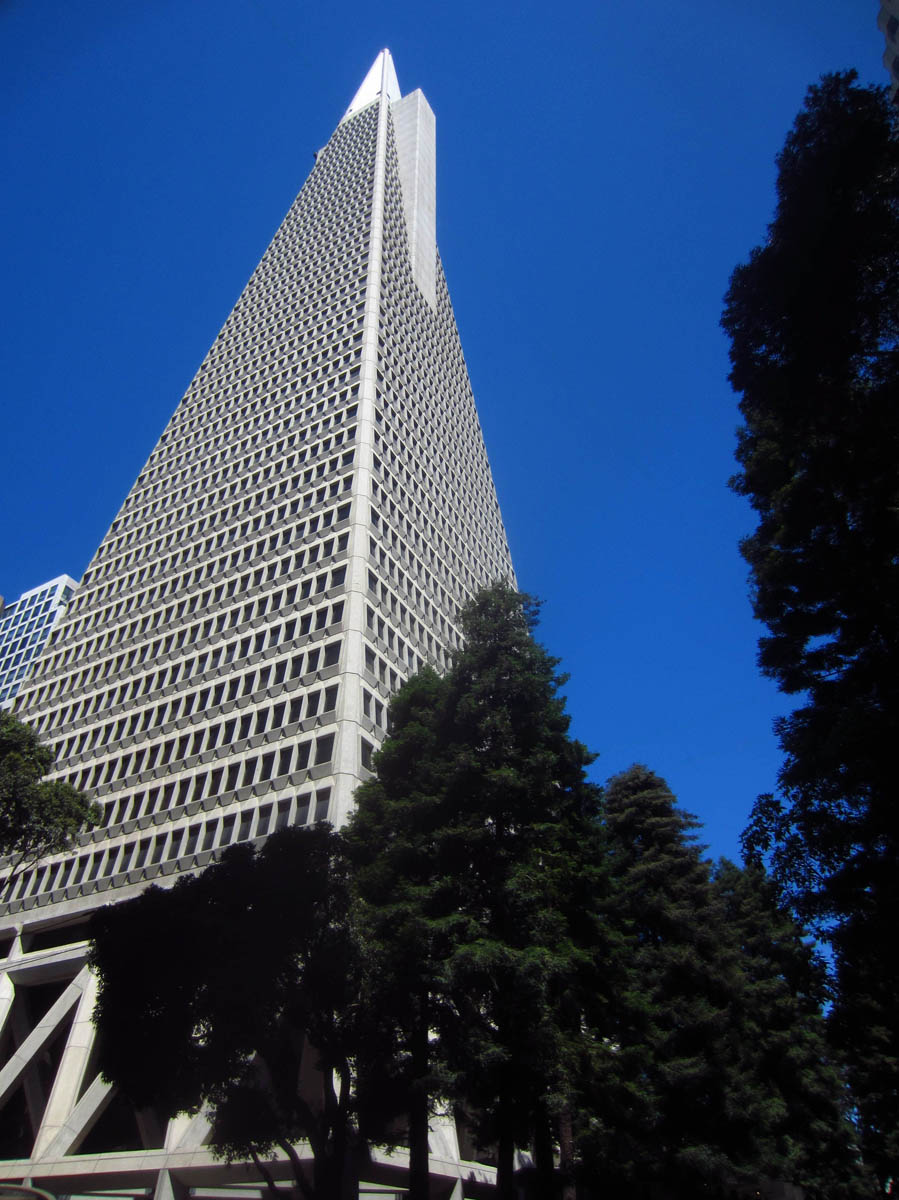 There is a beautiful half-acre Redwood Park at the base of the Transamerica Pyramid. 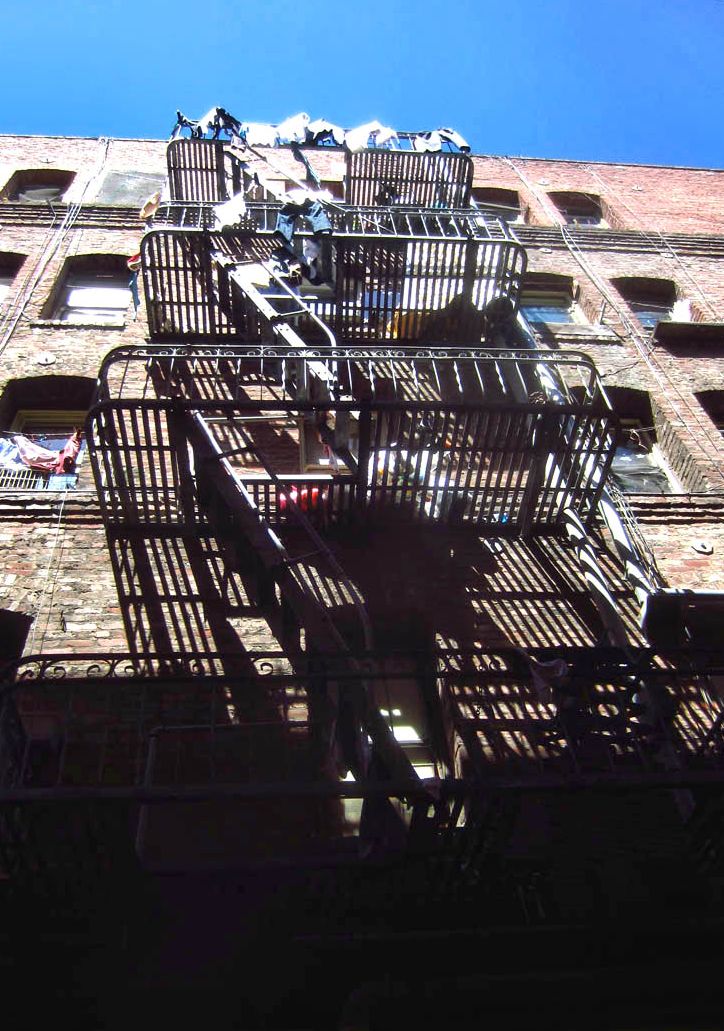 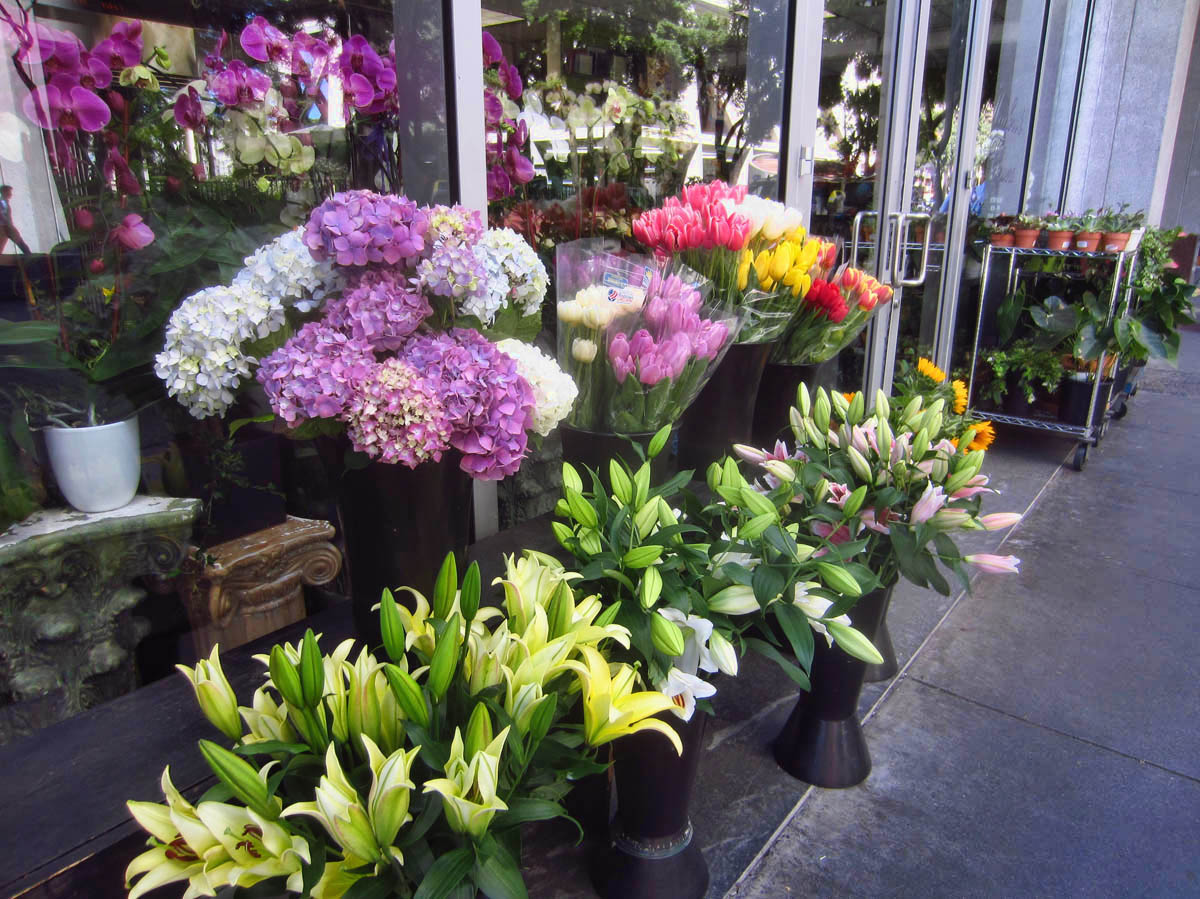 One of the things I loved about living in the city was the fresh flower stands everywhere.

For my “ethnic fix,” I head to San Francisco’s Chinatown.  Yes, I know it’s a tourist trap, but it also offers the greatest stimulation of the senses.  San Francisco has one of the largest Asian communities outside of Asia, and the oldest Chinatown in the US, established in the mid 1800’s.   Where Manhattan’s Chinatown seems a little darker with lots of designer bags being sold in secret back rooms, San Francisco’s Chinatown seems a bit more authentic, mostly due to the abundance of Chinese architecture.  Head down the back streets such as Waverly Place where many of the buildings are dated back to the early 1900’s, and you could be in Hong Kong.

I ask the man in the Candlestick RV Park office (of Asian descent) if he knows of a recommended place for dinner.  He tells me to “stay off Grant Street, you will get sick!”  He says the health ratings of the restaurants there are in the 40’s.   Instead, he recommends the “R&G Lounge” on Kearny Street. 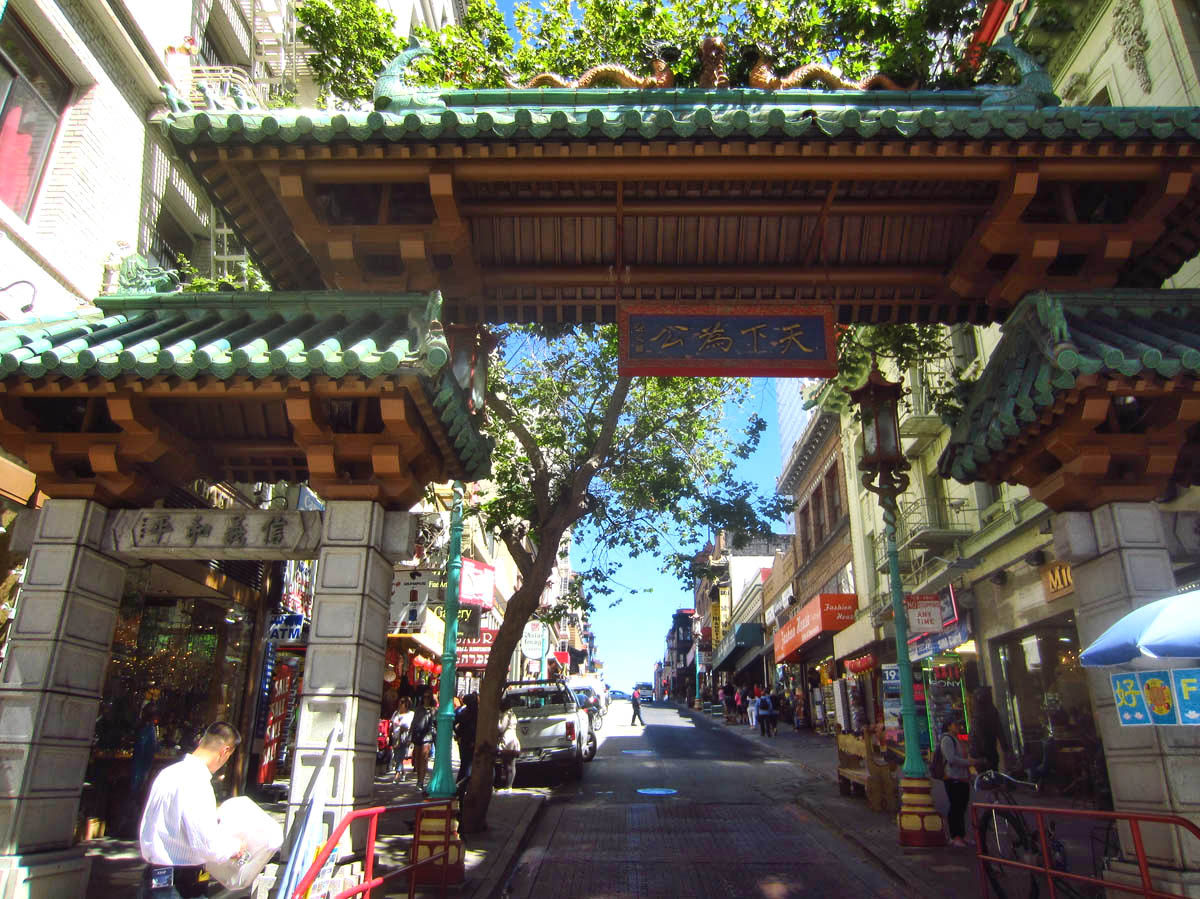 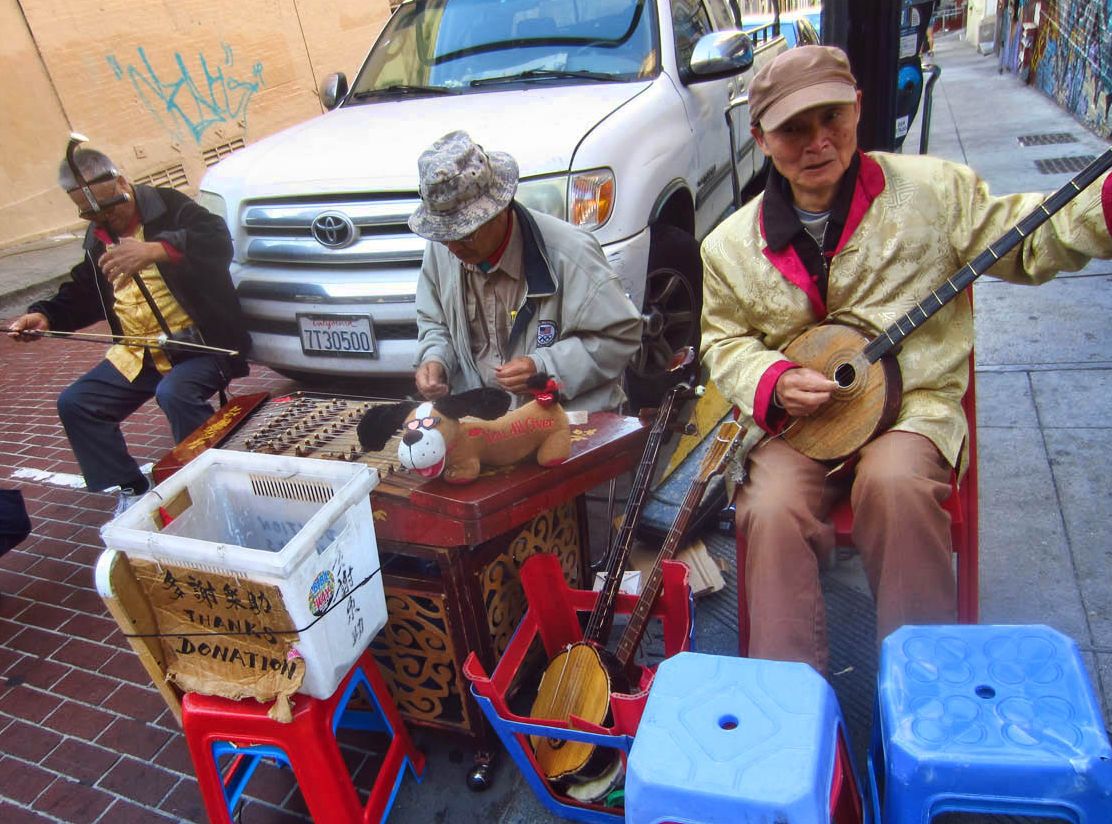 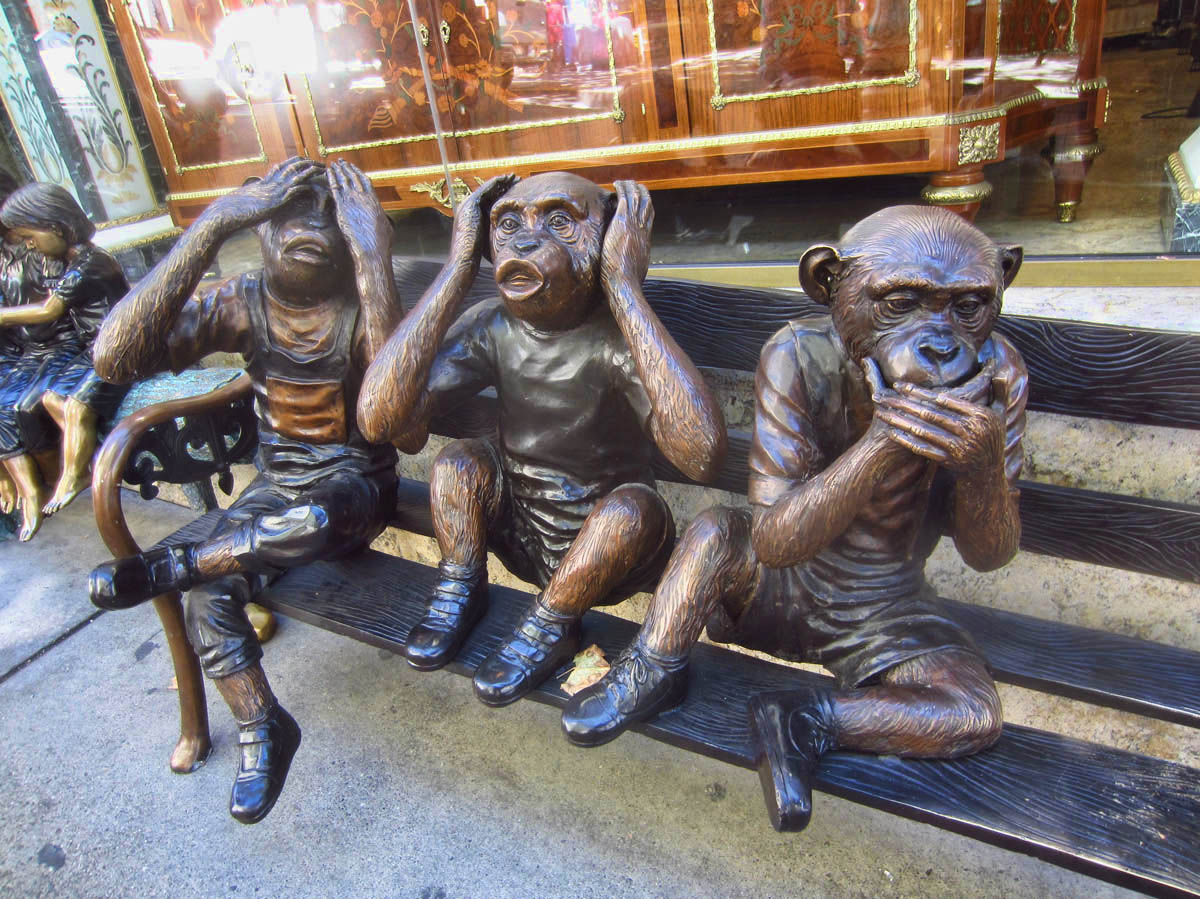 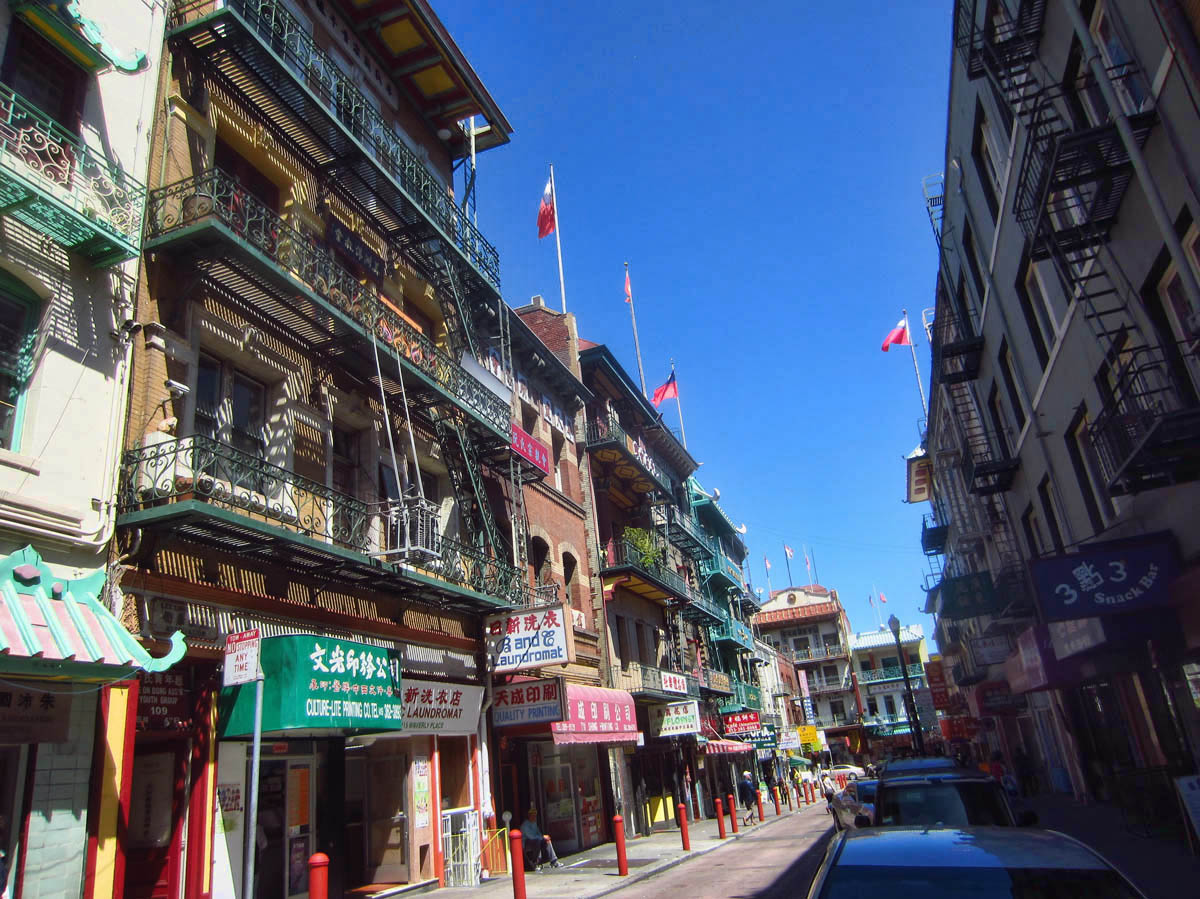 There is a lot of beautiful architecture off the side streets of Chinatown, dating back to the early 1900’s. 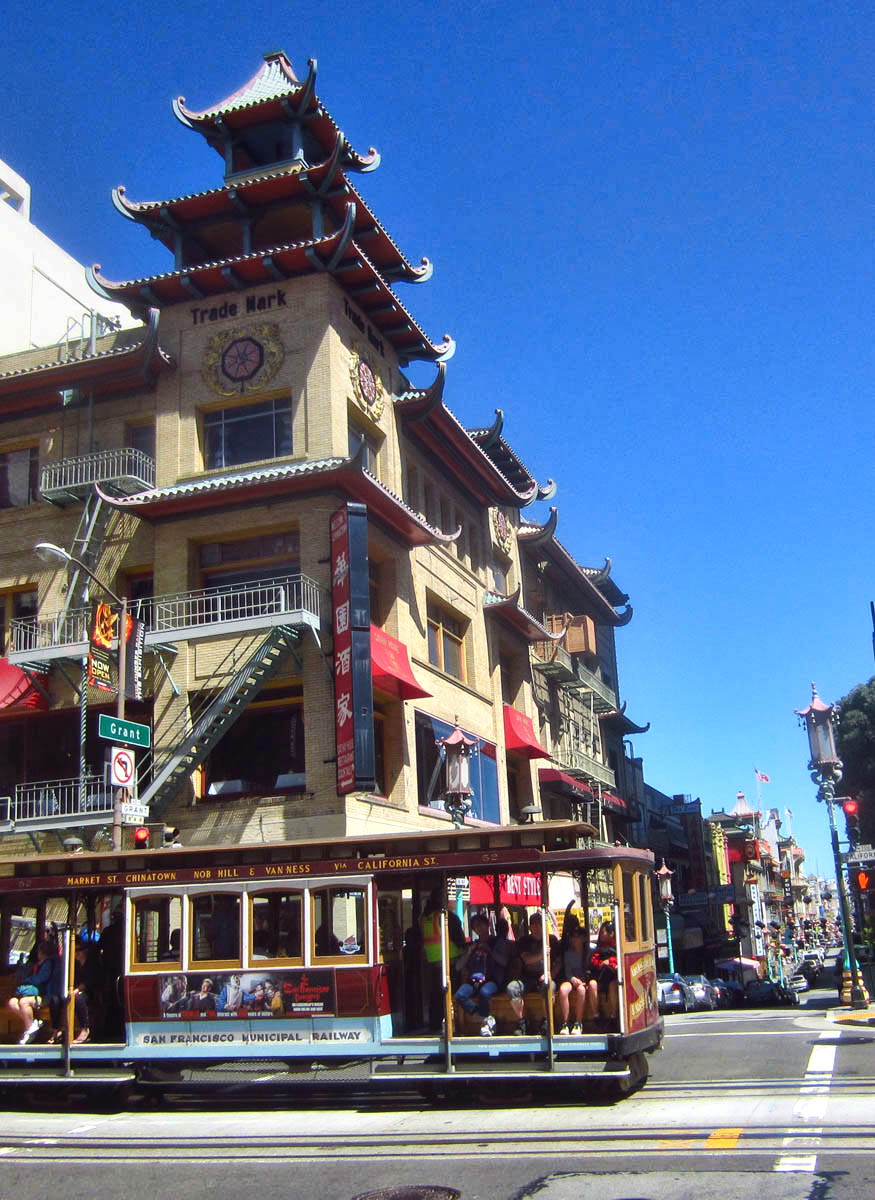 I take a seat at the bar to avoid the 45 minute wait, no doubt due to being featured on Anthony Bourdain’s “No Reservations – San Francisco” show.   I have the good fortune to land a seat in between two single business execs traveling on expense accounts.  Since everything at this restaurant is a la carte right down to the rice, we end up sharing lots of little plates.  The man to my right says he is “taste hungry,” so he orders four appetizers and two entrees for us to share.  The woman to my left, an exec in town for a wine conference orders more plates, leaving me, the retiree, with only one entrée to contribute.  We swap stories and laughs, family style.  It’s like three friends meeting for dinner, to the point that the bartender asks us how we all know each other, to which we laughingly reply, “We don’t!” 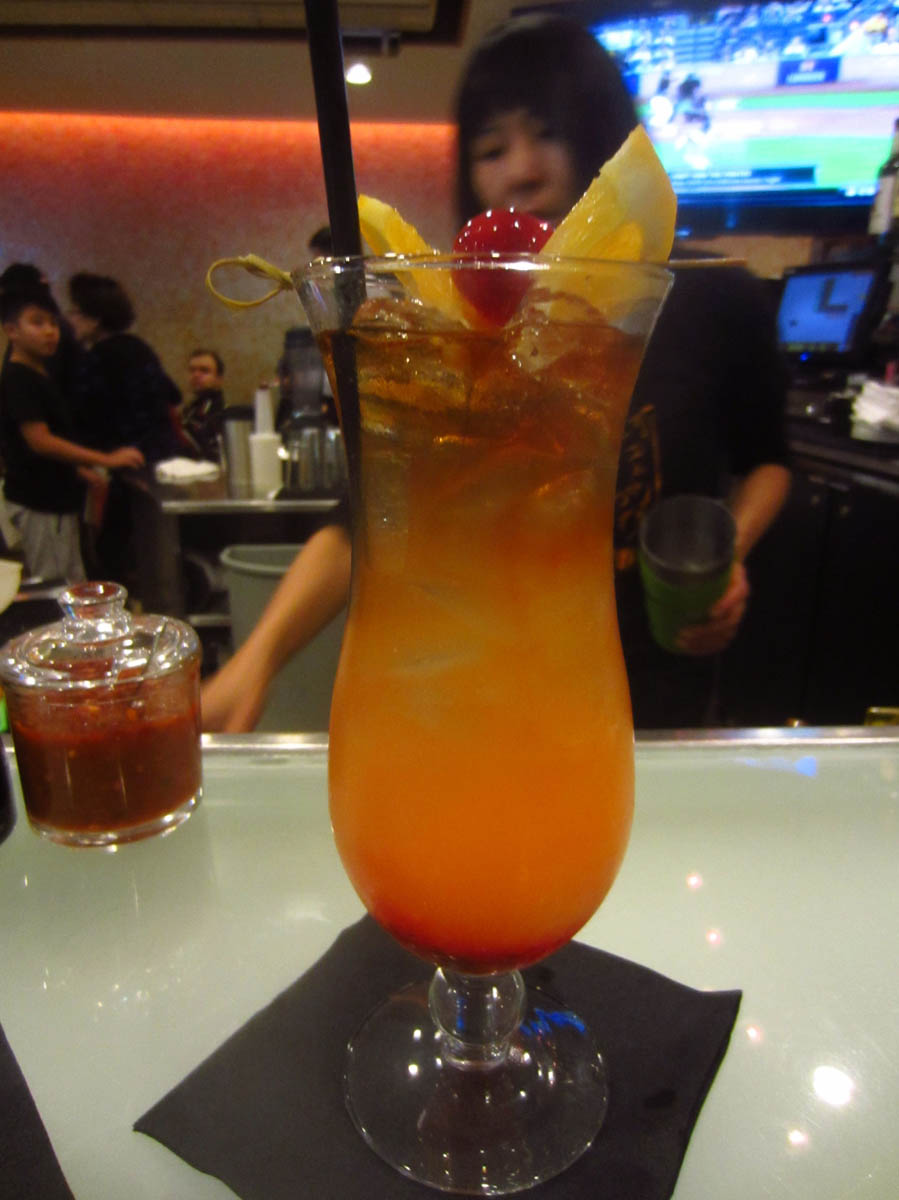 This was the best Mai Tai i have ever had! Three kinds of rum. 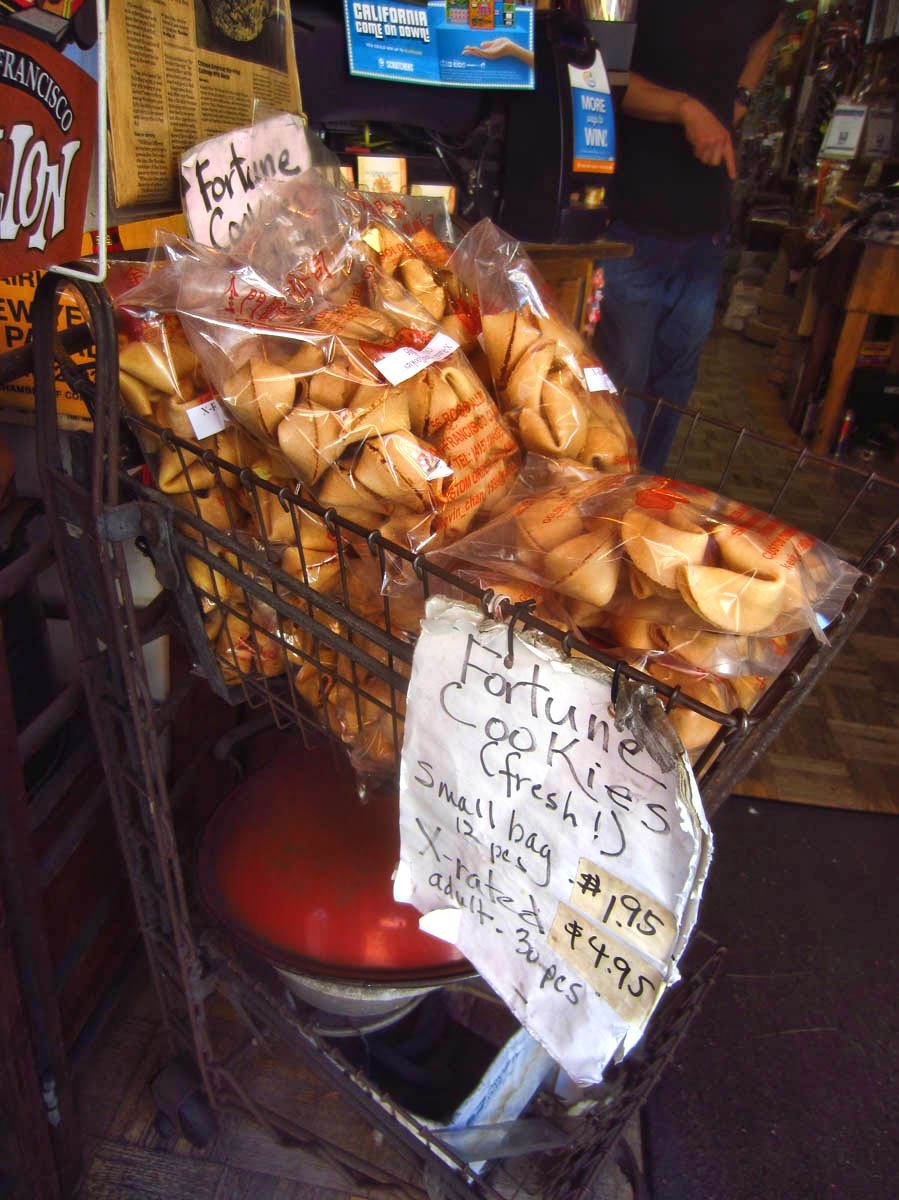 Down Ross Alley is the 40 year old Golden Gate Fortune Cookie factory, where you can find your fortune according to rating. 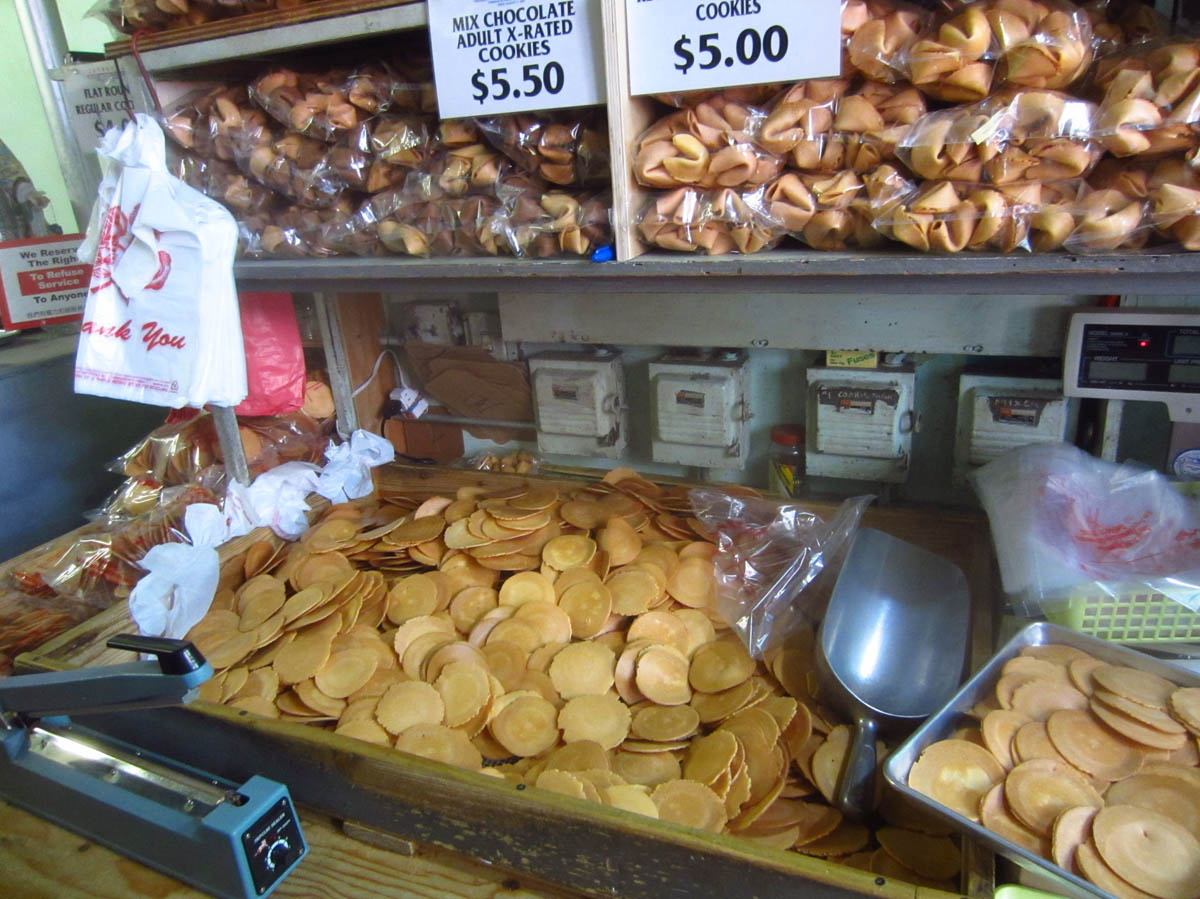 I never knew you could buy the cookies flat and unfolded. 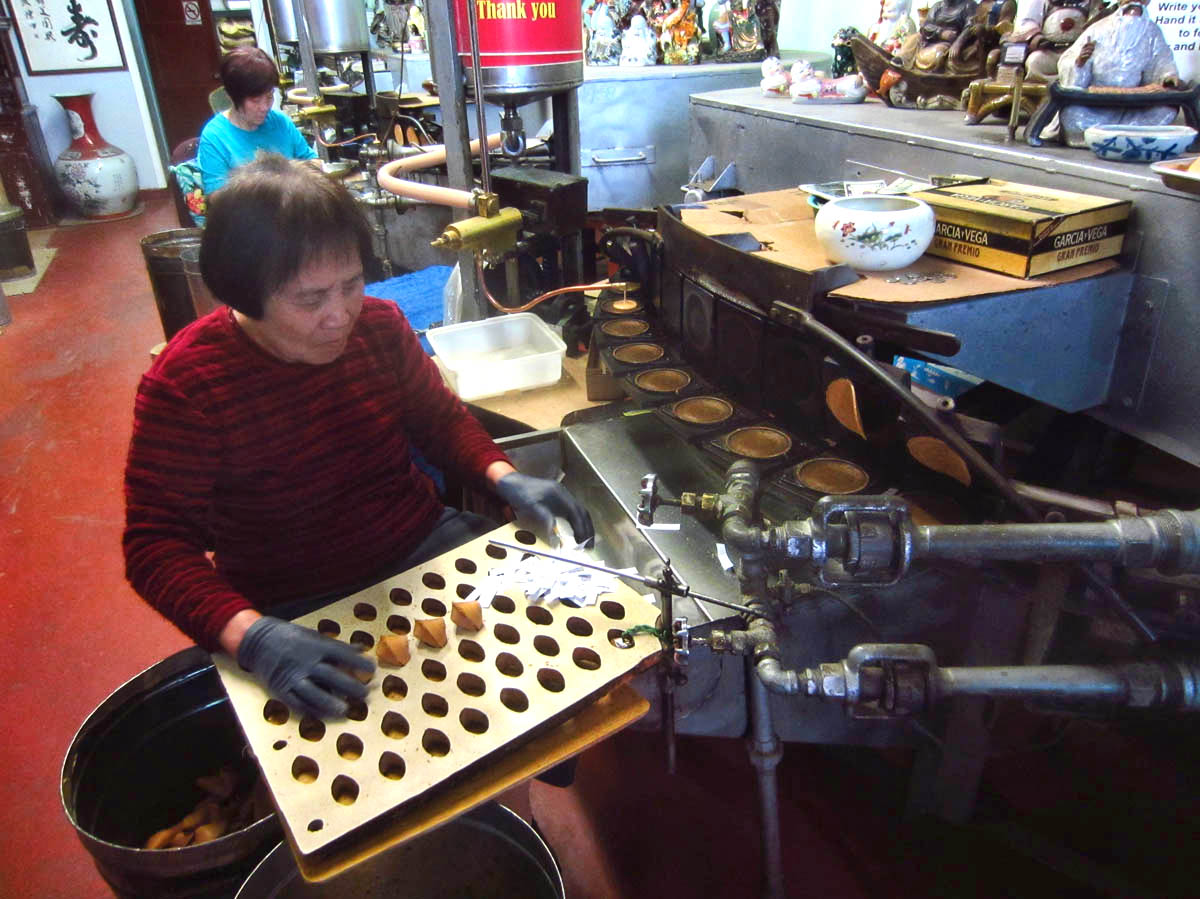 They make 20,000 cookies per day here. The round cookie comes off the press on the right. She inserts the fortune, folds it in half, and while it is still warm, loops it around the thin metal rod in the lower center of the photo. When it cools, it is formed in the typical fortune cookie shape. 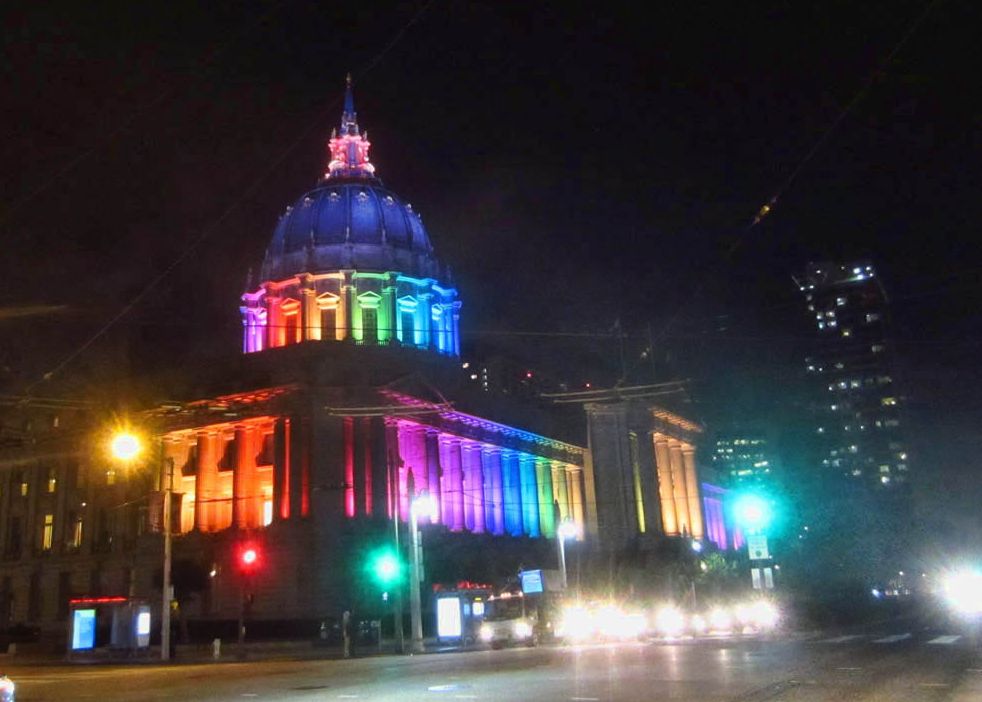 Driving by City Hall on my way home reminds me I need to get out of the city before the Pride Parade!

19 thoughts on “Getting My City Fix”