I leave the cool, clear, high elevation evergreen forests of Sequoia National Park where I have been running the heater every morning to take the chill off, and drive down over 6,000 ft to the Central Valley where it is hot, dry, and straw-colored.  As if that weren’t shock enough to my system, all of California is suffering a heat wave this week.  I’ve gone from snuggling under a down comforter to “hot, hot, Africa hot” in under two hours.

I am off to visit our newest National Park, Pinnacles, newly anointed in 2013.  The road through irrigated farm land and nut orchards is pot-holed and heavily trafficked by trucks.  It seems like I will never get to the turnoff for Pinnacles National Park.   The final nine miles are hilly, winding, and often too narrow for me to fit in one lane, leaving me the choice of straddling the line into oncoming traffic, or driving over the center stripe punctuated with knobby reflectors.    The rough cattle guards every mile seem to rip at the newly healed “stitches” in the Winnie’s underbelly.  After two straight weeks of spotty cell service, smoky camp fires, and shrieking, ill behaved toddlers, I realize I am just about “National Parked Out.” 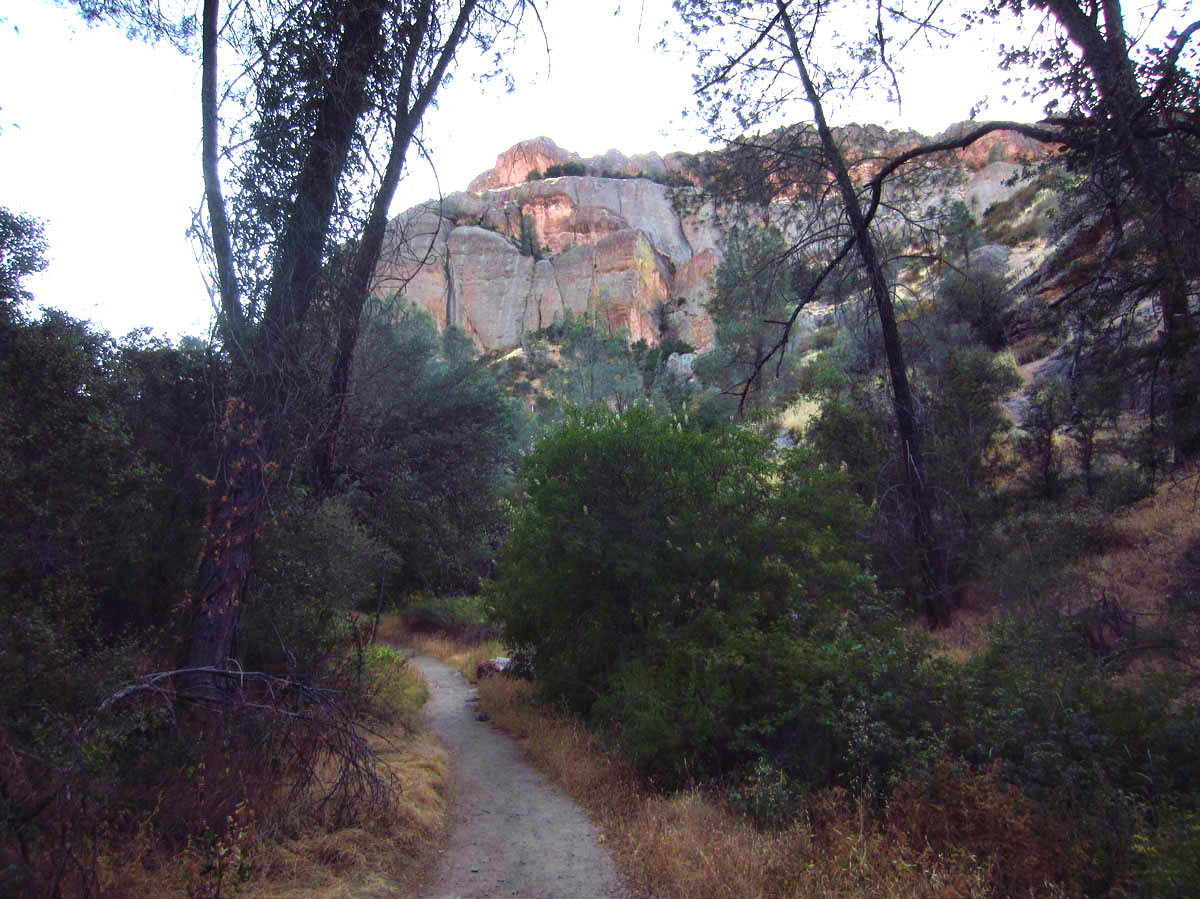 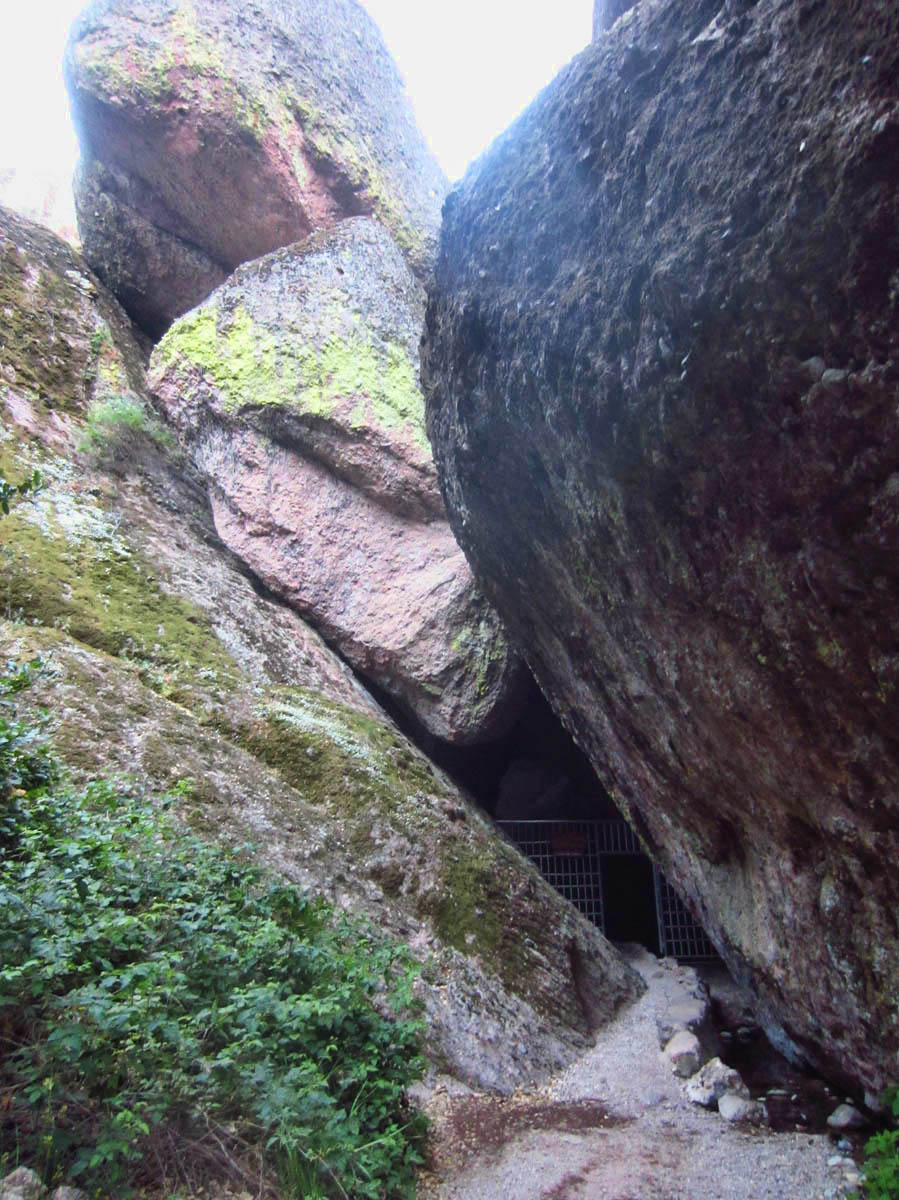 Note gate to enter cave at end of path gives an idea of the size of the boulders. 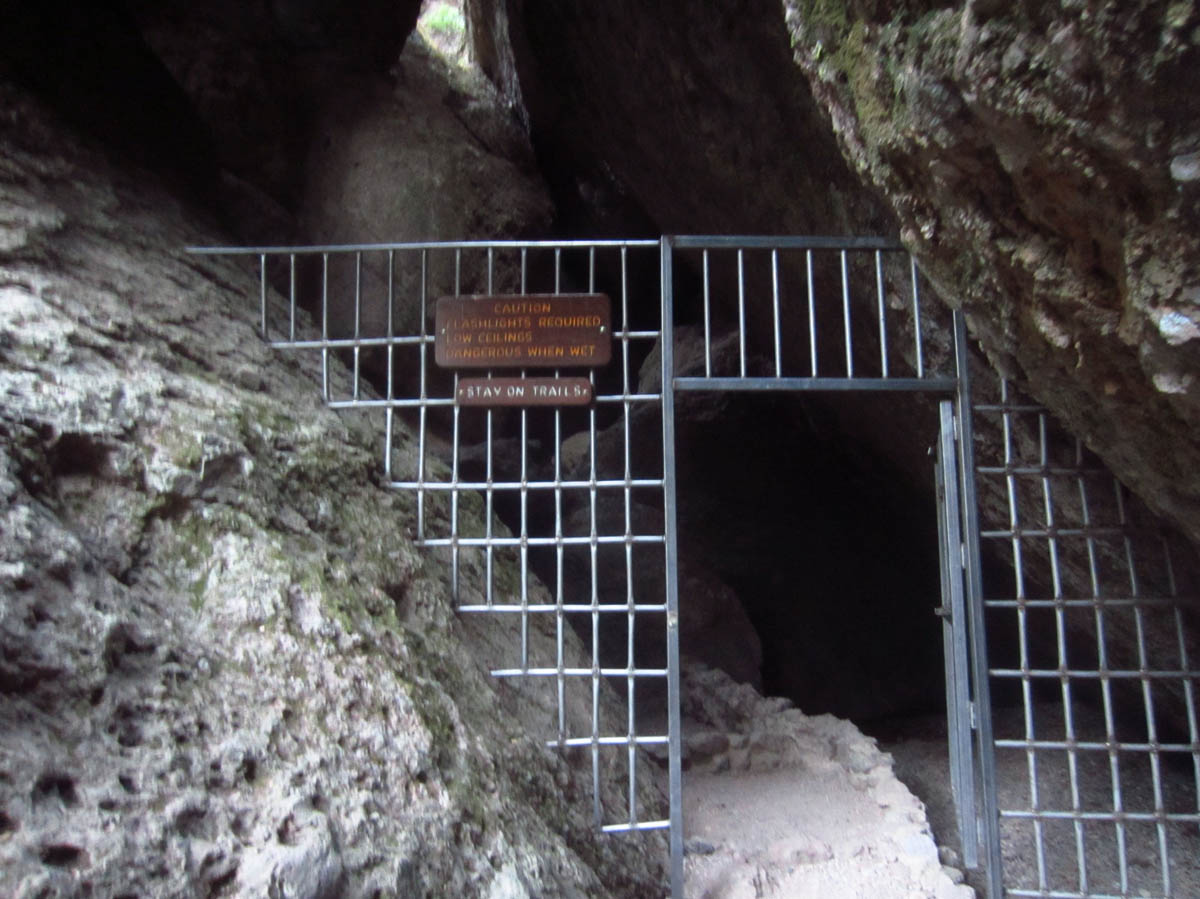 This cold cave is a great place to escape the heat! Flashlight required, as it gets dark further in. 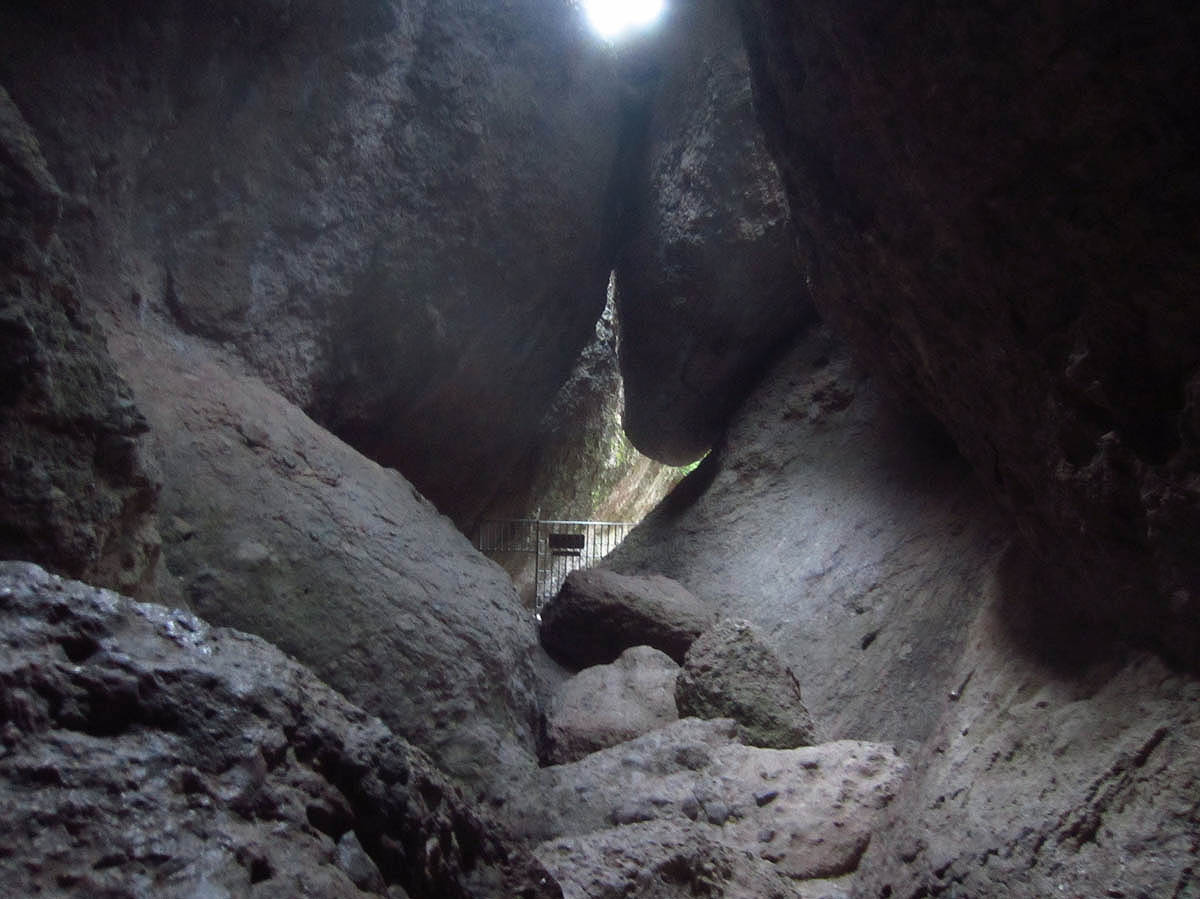 This is a talus cave, formed when boulders fell into a deep narrow canyon and lodged against the rock walls.

Pinnacles National Park is the newest recreational area to be designated as one of only 59 national lands with official “Park-with-a-capital P” status, and the last remaining park in the State of California that I have yet to visit.   But from what little research I have done on this park, it seems to fall short of the typical wonderland that warrants  being designated as “National Park.”  No towering peaks or raging rivers.  No sacred sites or ancestral ruins.  No “tallest tree in the world,” or “grandest canyon on earth.”  I am struggling to understand what it is about Pinnacles that would prompt Congress to bestow this esteemed designation.  I am just not seeing it.  As I am driving up the curvy two-lane farm road that reminds me of the rolling grassy hills and scrub brush of the Texas Hill Country, I say aloud, “Okay, Congress.  This’d better be good!” 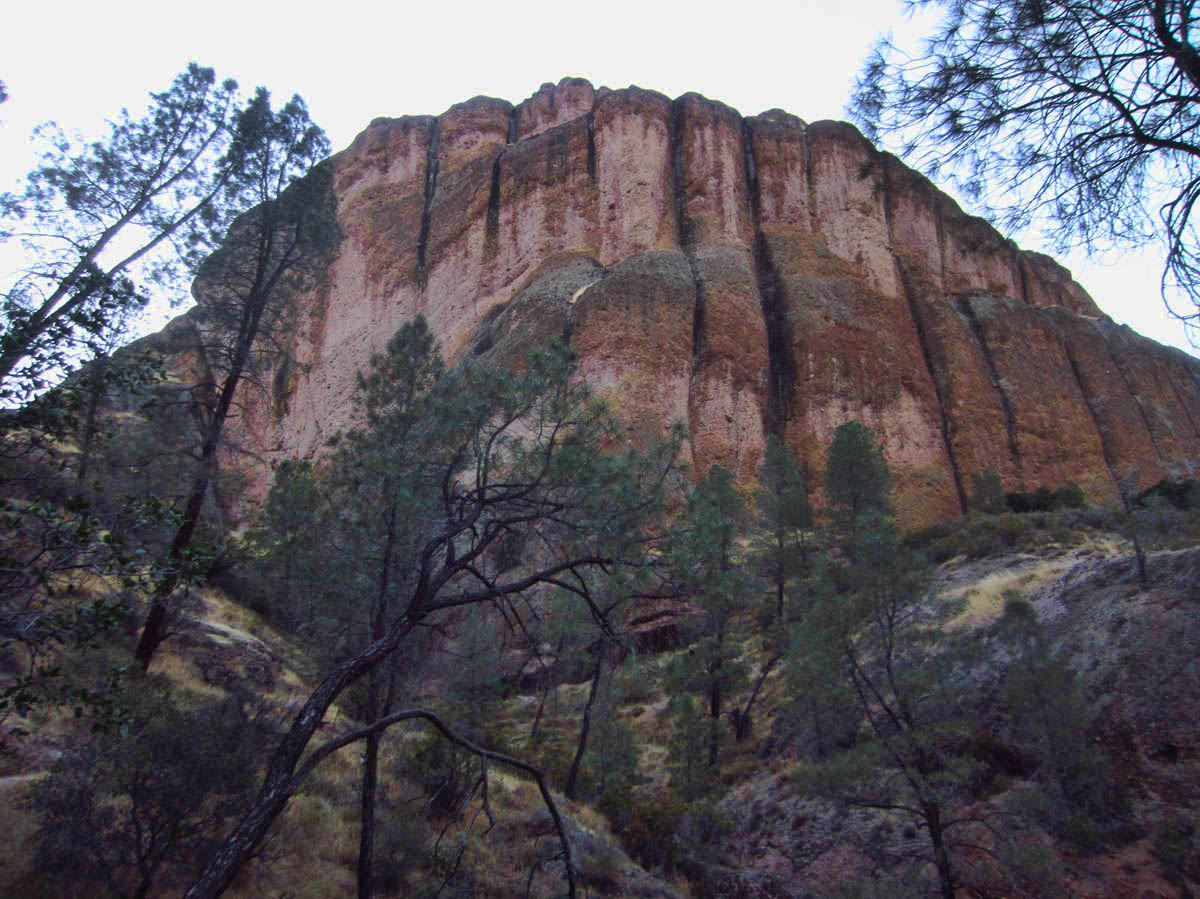 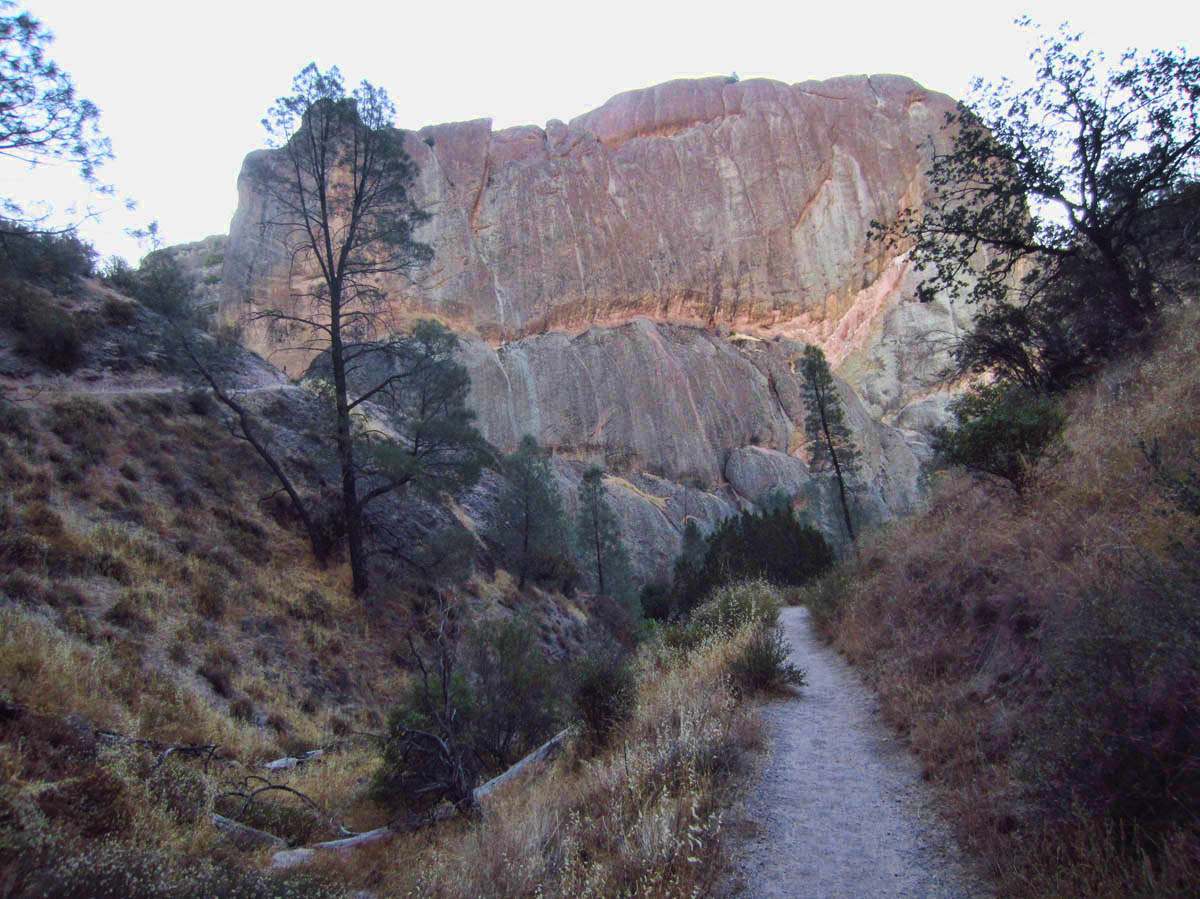 This loop is a “lollipop,” which is a loop at the end of an out and back trail. 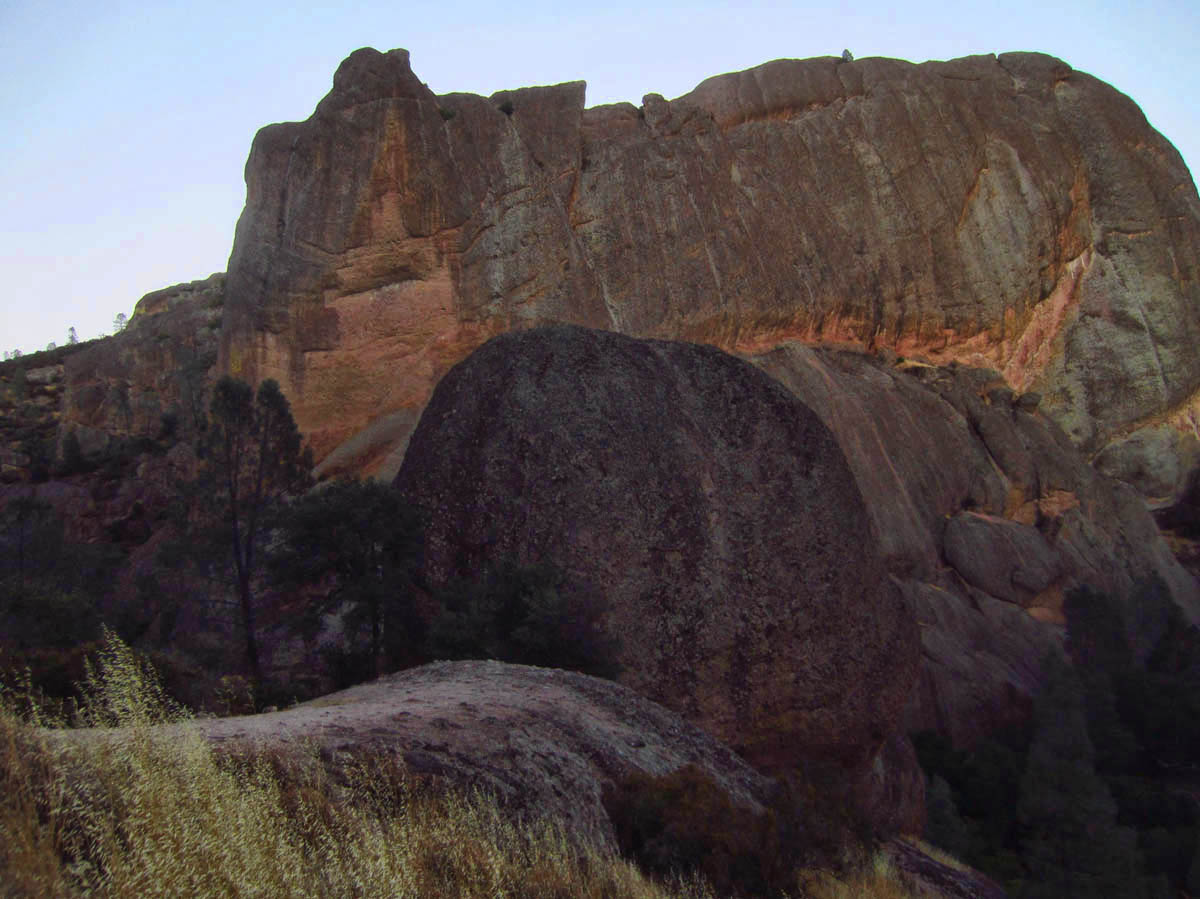 Total distance for the loop is 5.5 miles. 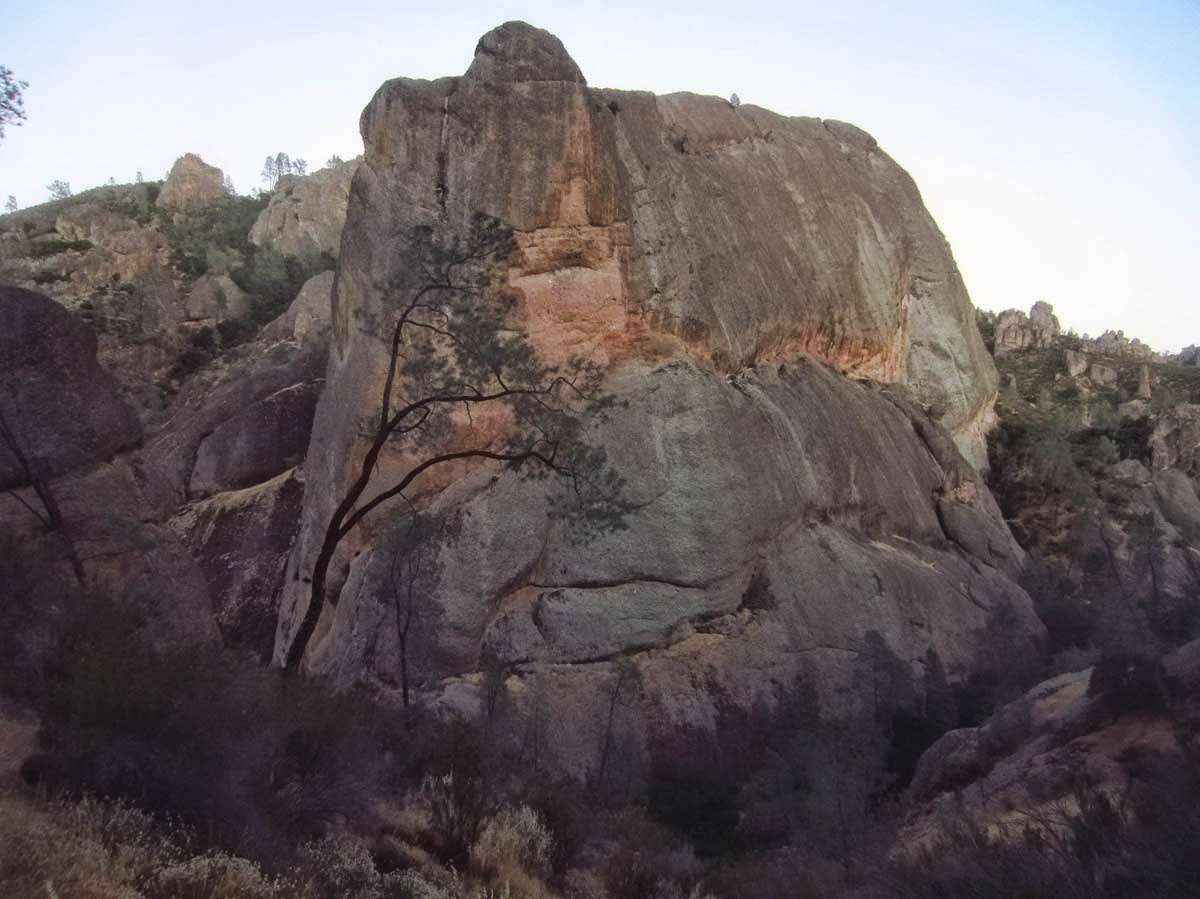 I have arrived on the “pinnacle” day of the year, the summer solstice.  It’s also the full moon.   Knowing many parks typically have full moon hikes or night sky programs on the night of the full moon, I am excited to get to the Visitor’s Center and sign up for any interpretive programs.   Only the “Visitor’s Center” is nothing more than a country general store with a few books and tee shirts for sale, all bearing the same Pinnacles logo.   There is one woman in civilian clothes behind the counter.  (I later learn she is a Park Ranger out of uniform.)

I have checked the weather forecast of Pinnacles National Park and it says a high of 87.  Hot, but I consider booking a site in the campground with hookups.   But my in-dash thermometer registers over 100 degrees, and it sure feels a hell of a lot like hell for only 87 degrees.  My suspicions are confirmed when the first thing I see when I walk in the door is a bright orange sign warning of “Extreme Heat Advisory.  Over 107 degrees!”   I feel like I have been transported back to the hell of a Central Texas summer.

The woman behind the counter is helpful and almost apologetic.   There are no Ranger-led programs.  In fact, there is only one…literally one “Lone Ranger” who takes care of the one small campground.   This is it.   Thirty miles of hiking trails, one campground, and one Lone Ranger.  In our newest National Park. 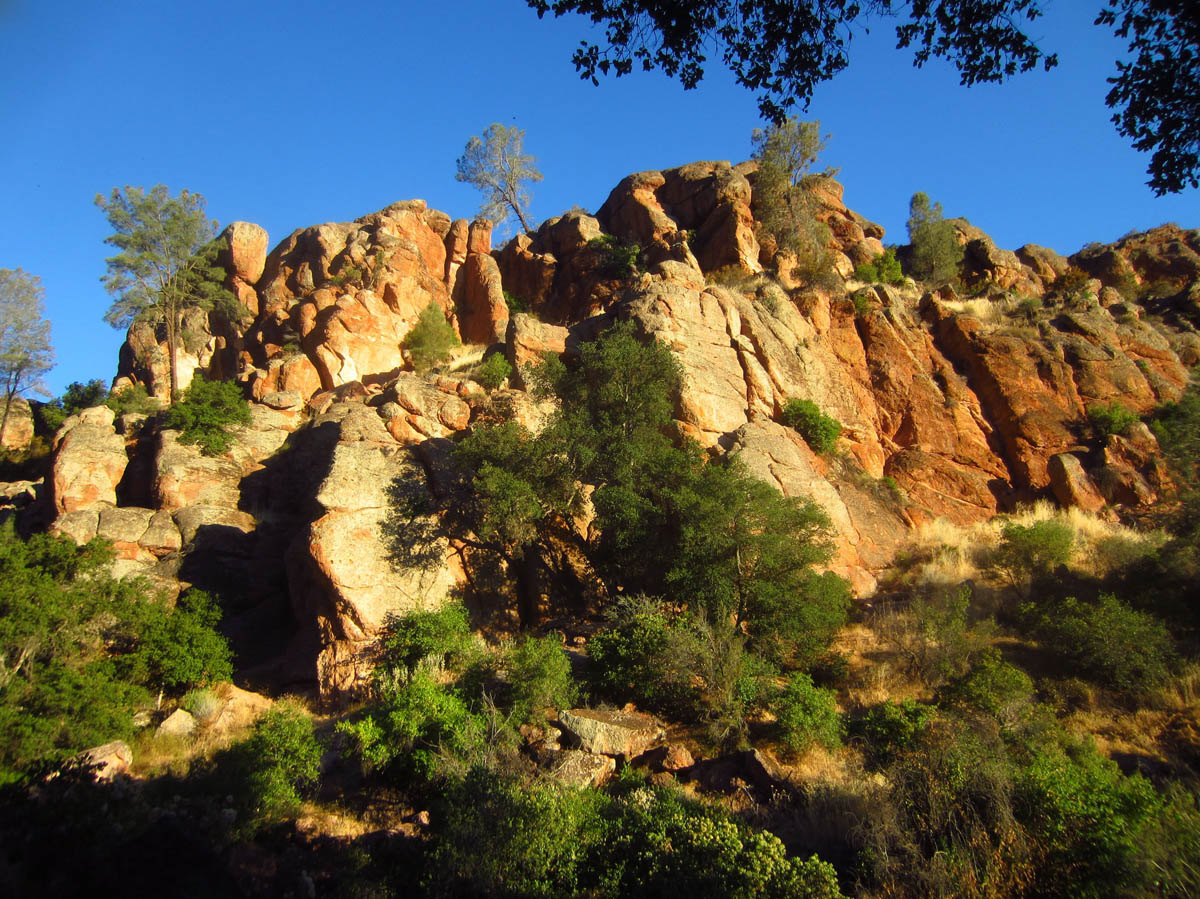 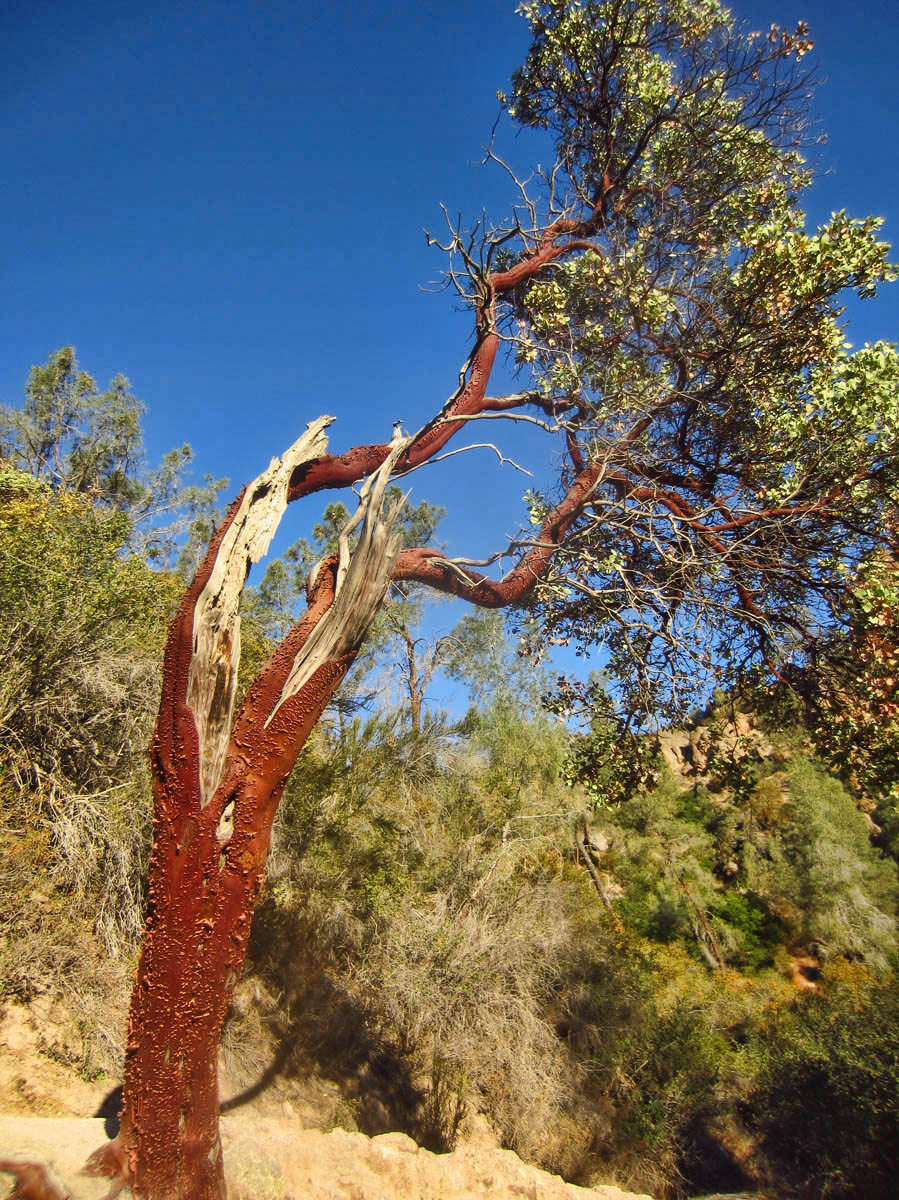 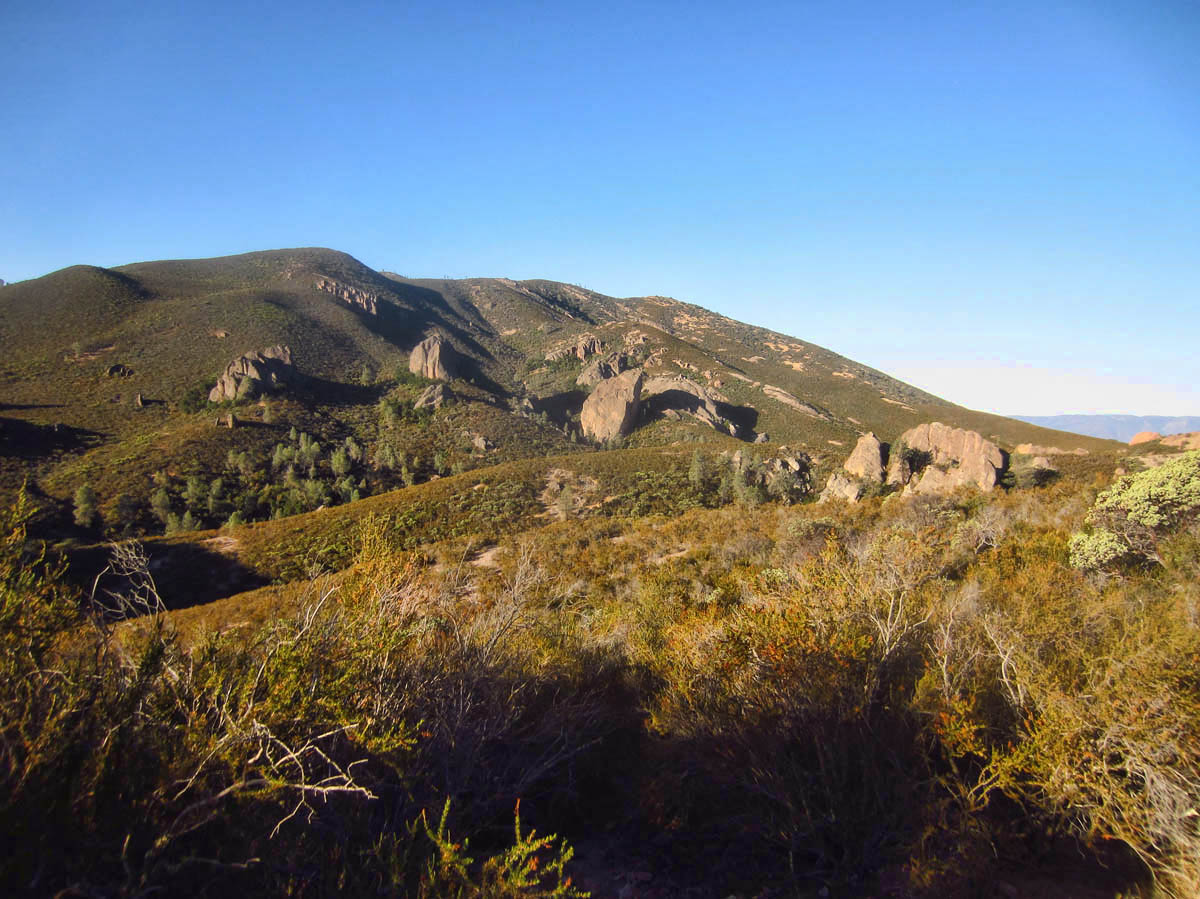 The area is predominantly rolling hills, with large boulders scattered about. 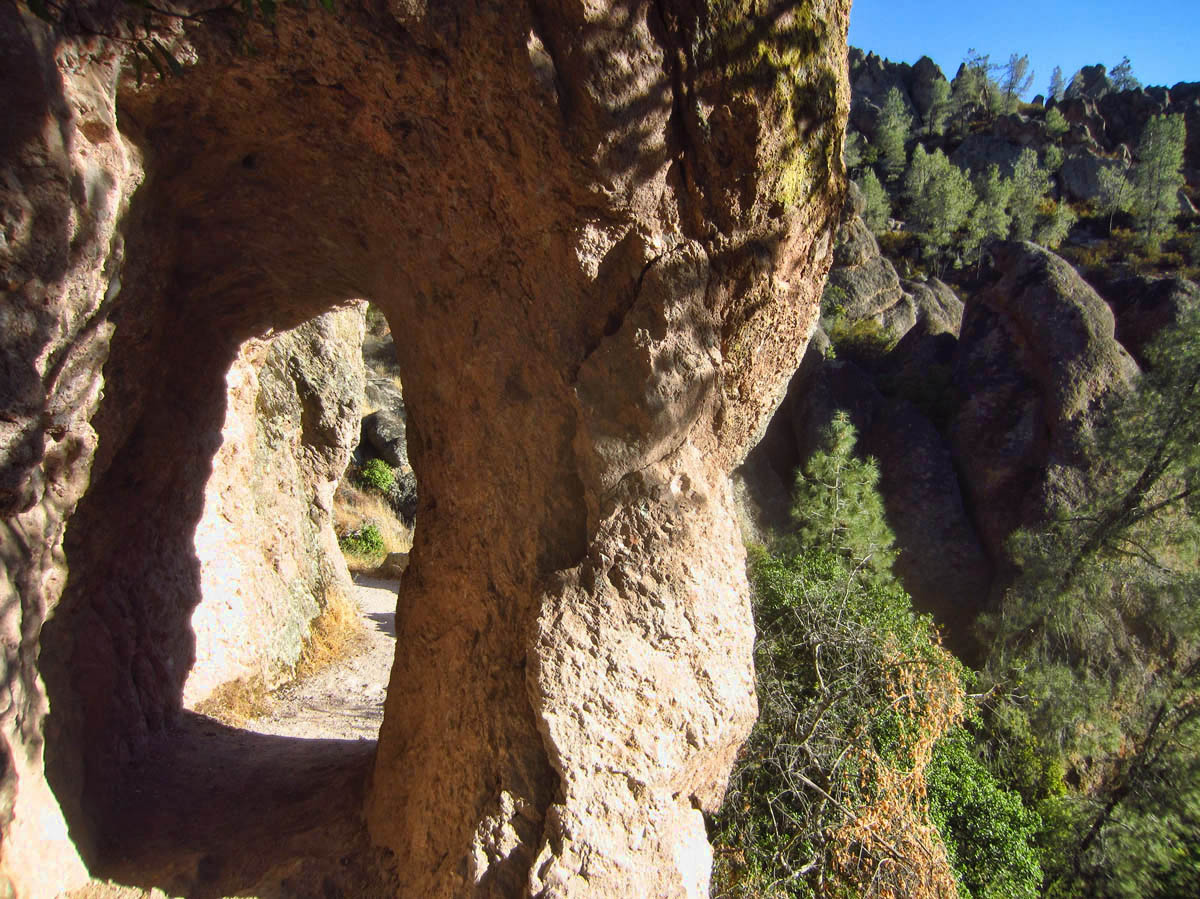 My first question is “What happened to the 87 degree weather forecast?”  She tells me that the national forecast is based on zip code twenty miles toward the coast, where it is indeed 87.  Here in the Pinnacles NP, it’s 107.  She asks, “You DO have air conditioning, I hope?”

We talk about some of the hiking in the area.  She tells me due to the heat advisory, it’s not recommended.   “You can always hike at night.”   In all my travels, this is the first time I have ever had anyone actually suggest I hike at night…

As a National Park junkie, I feel like I’ve been had.  Finally, after some small talk, I get up the nerve to ask the one question that has been on my mind since I first began researching my visit, “Why is this a National Park?”  As she braced both of her hands on top of the glass covered park map on the counter, it seemed as if a hush fell over the room, (only there was no one else in the room.)   “It was political pork.” 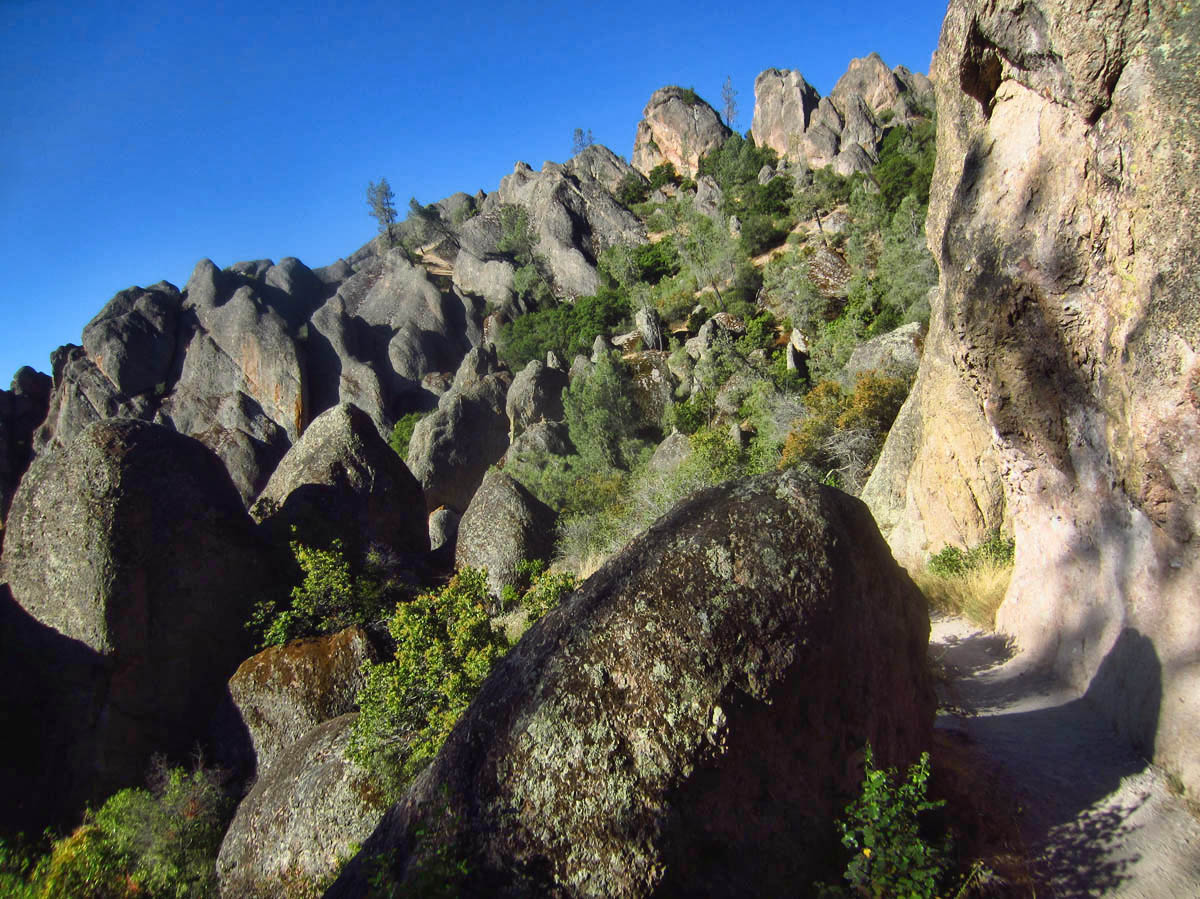 Looking out over what is considered the “High Peaks.” 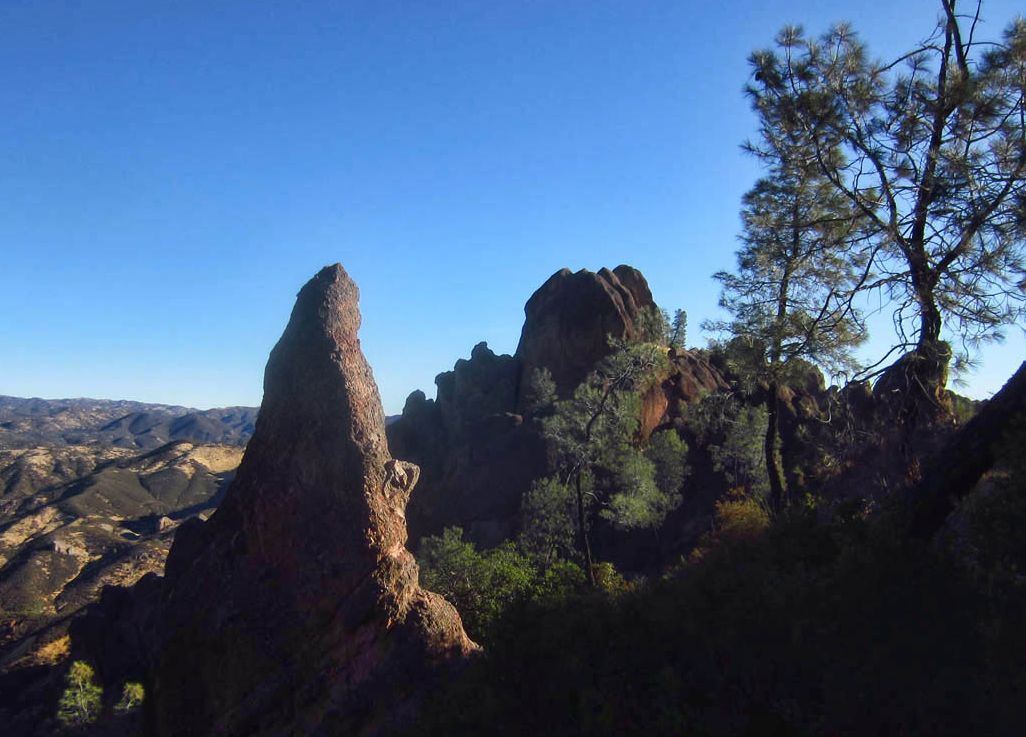 A few “pinnacles” from which the park gets its name. 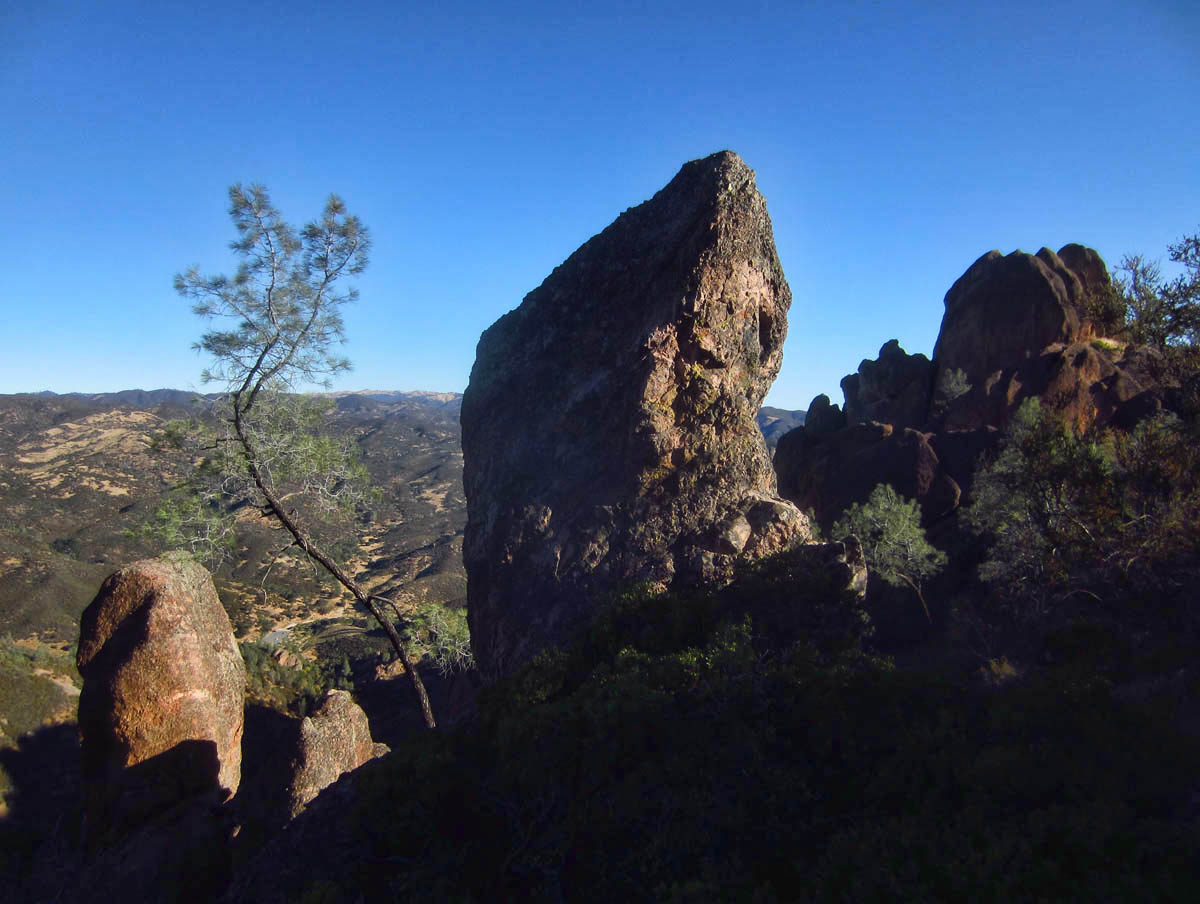 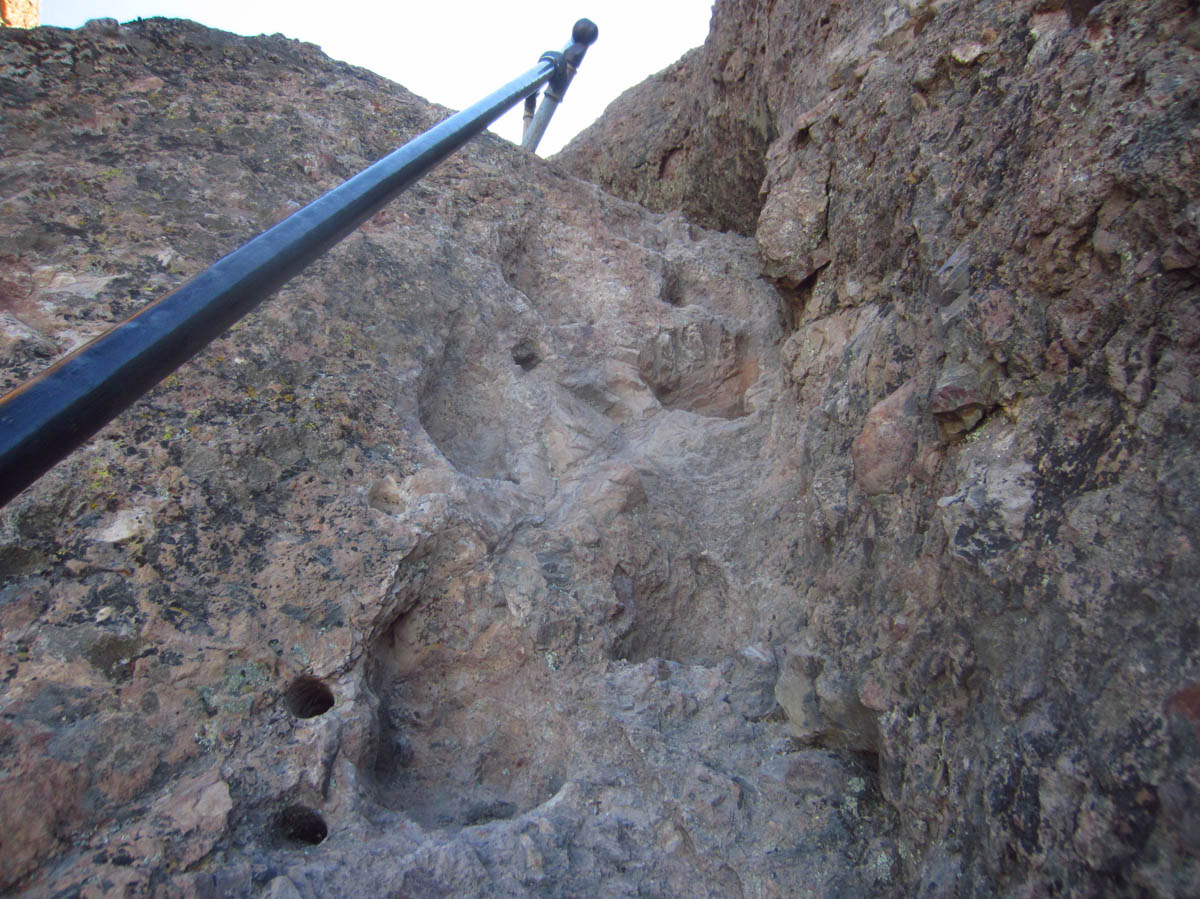 Climbing up over the High Peaks is extremely steep. Foot holes were carved in the rock.

She goes on to tell me that the Congressman for this district, Sam Farr, along with several of the officials from the neighboring towns were angered by the multi-millions of tourist dollars going to the nearby coastal towns of Monterey and Carmel  just 30 miles west, and wanted their piece of the pie.   They began a congressional campaign to elevate the status of Pinnacles National Monument to one of the 59 designated “Parks.”  It was political “pork,” and it passed.  This is clearly a passionate subject for the out-of-uniform ranger, as she tells me, “We had to change every single sign and piece of collateral material in the entire park with our own funds.  We got no help.  On top of that, as a part of the National Park system, we lost 3% of our funding that same year.  Thank you, Sam Farr!” 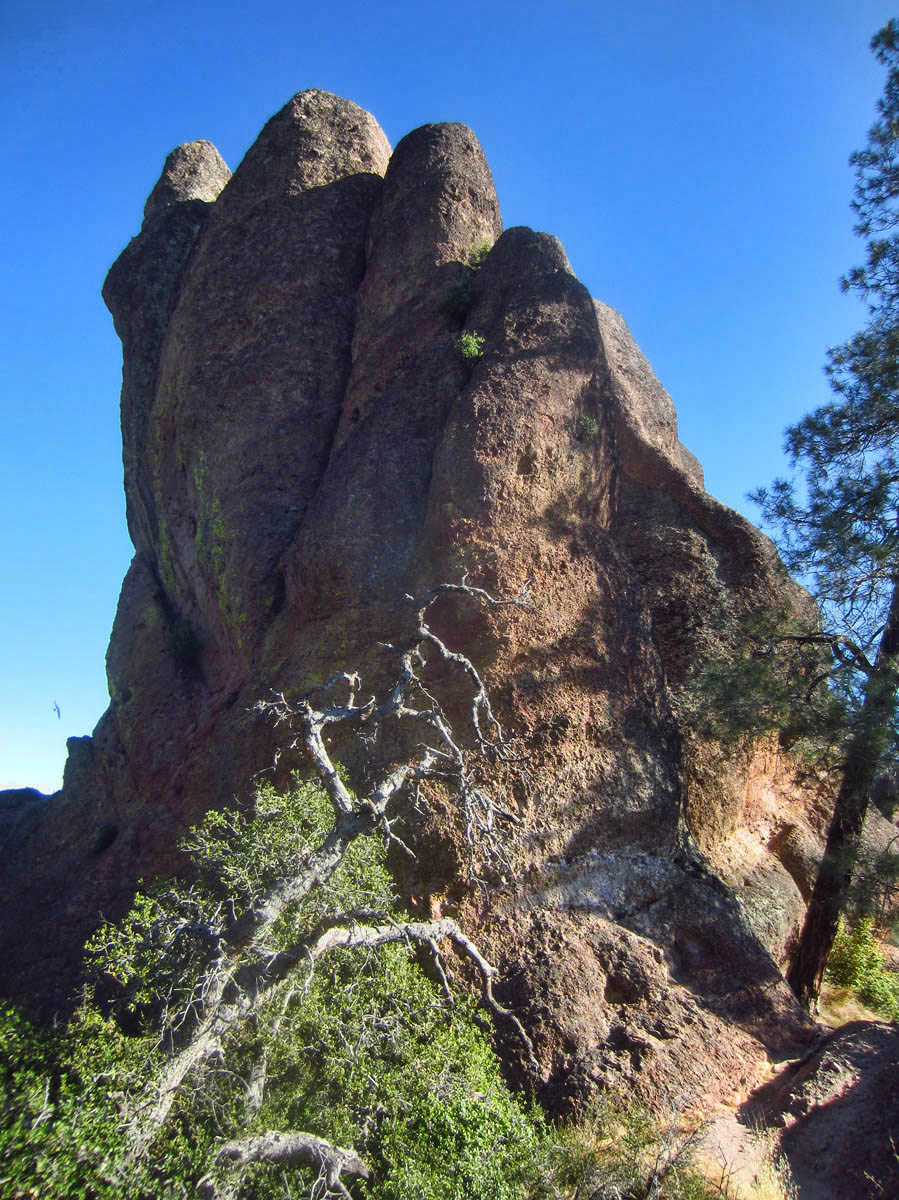 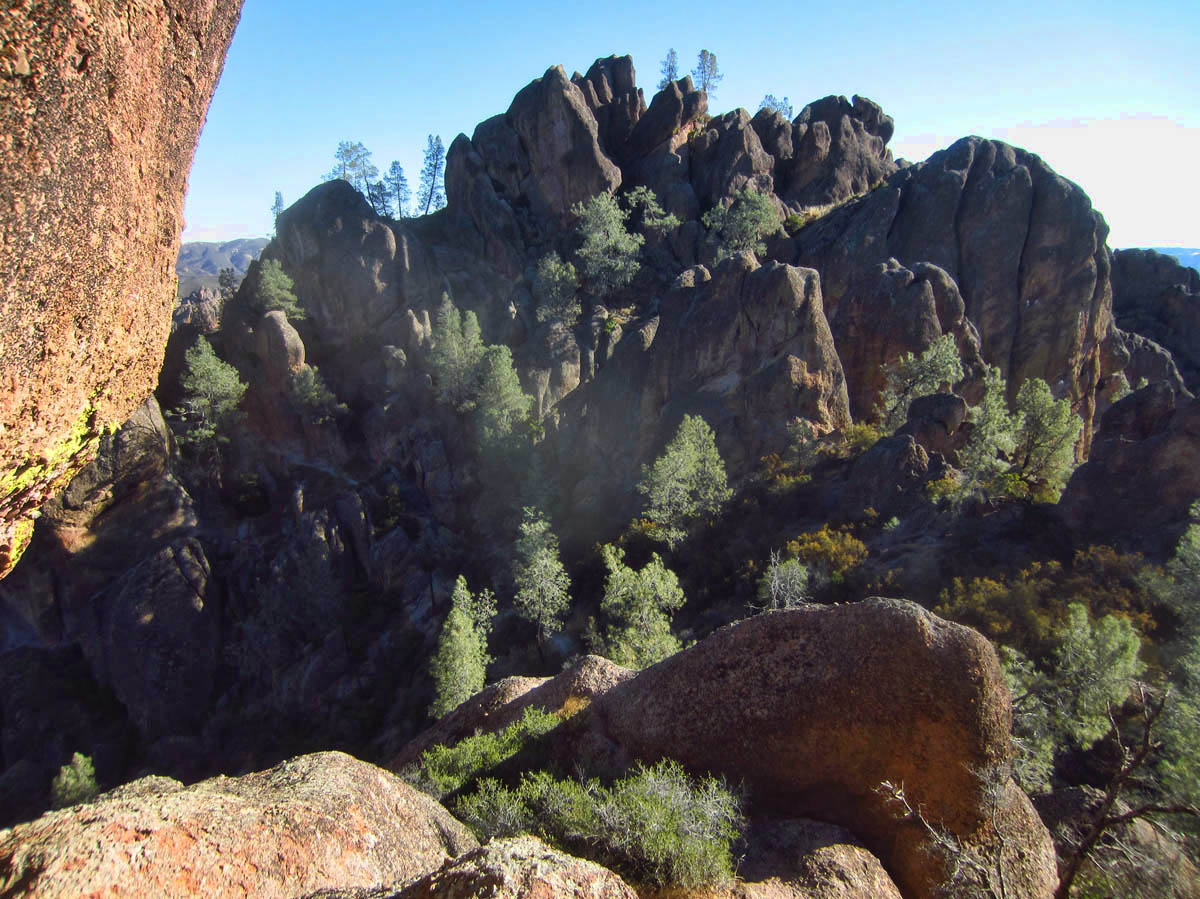 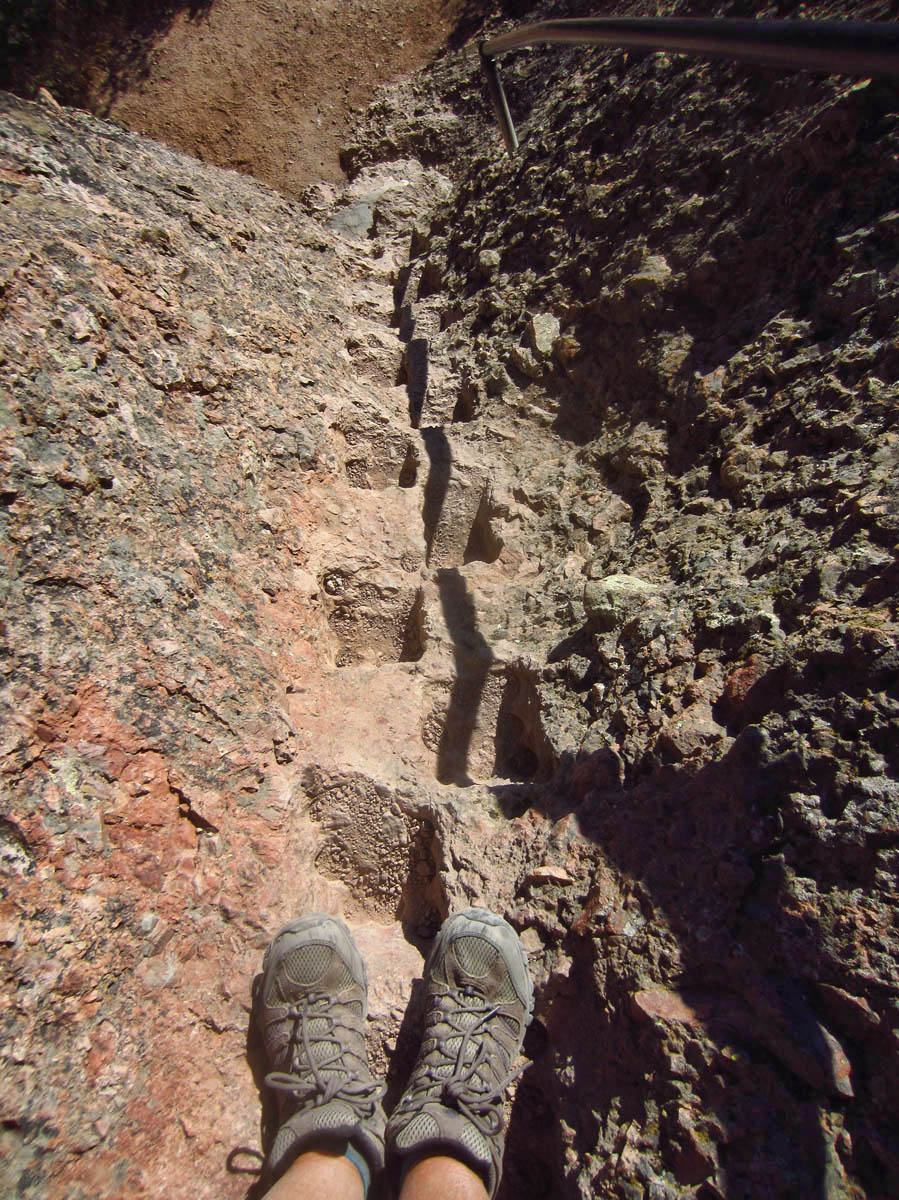 Heading down the side of one of the peaks. Steep! 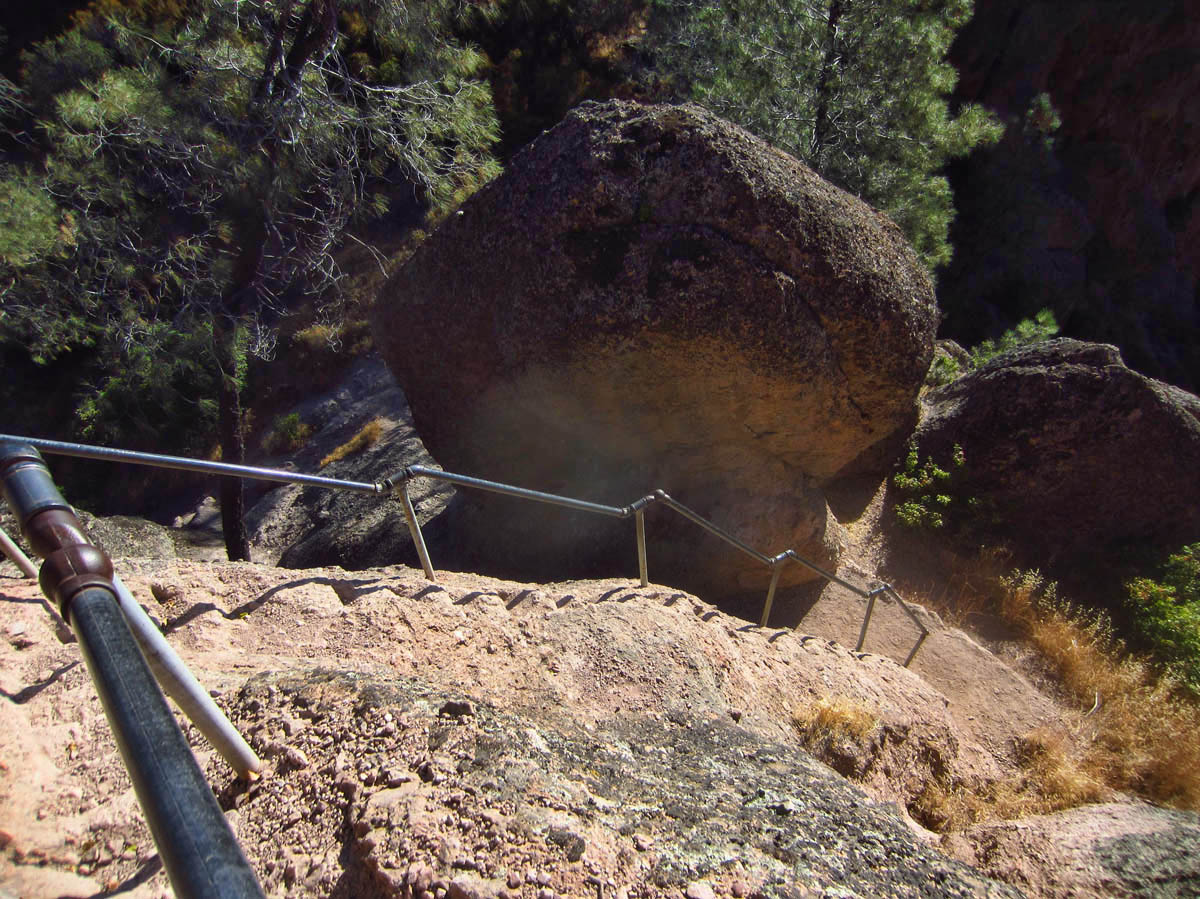 I’ve driven too far to stay less than two nights, so I pay my $36 a night for electricity, and decide I will make the best of it.   I do two hikes while here.  The first is a five mile late evening “lollipop” hike (out and back with a loop on the end) to the Balconies Cave (even the name suggests I am in Texas) and Balconies Cliffs overlooks.   It’s pleasant enough with some interesting rock formations and a talus cave that was formed when boulders collapsed over a narrow canyon, sealing it overhead.  It’s fun to scramble up and out the cool cave to make the loop.

But I want to hike the “premiere” hike in the park, the High Peaks Trail. This will be a six mile loop with 1,500 ft of elevation gain through the tall pinnacles. The ranger tells me it heats up in a hurry on those exposed rocks, so I had better get an early start. My former hiking gang will be surprised to know I was on the trail before 6:30am. It was a beautiful, cool morning climbing up through the volcanic spires that are so unique to the rolling grassy hills that surround this area. Sitting atop the San Andreas fault, the Pinnacles area was once a line of volcanos, part of the Pacific “Ring of Fire.” Those volcanoes were split apart during earthquakes, leaving the pinnacle formations. 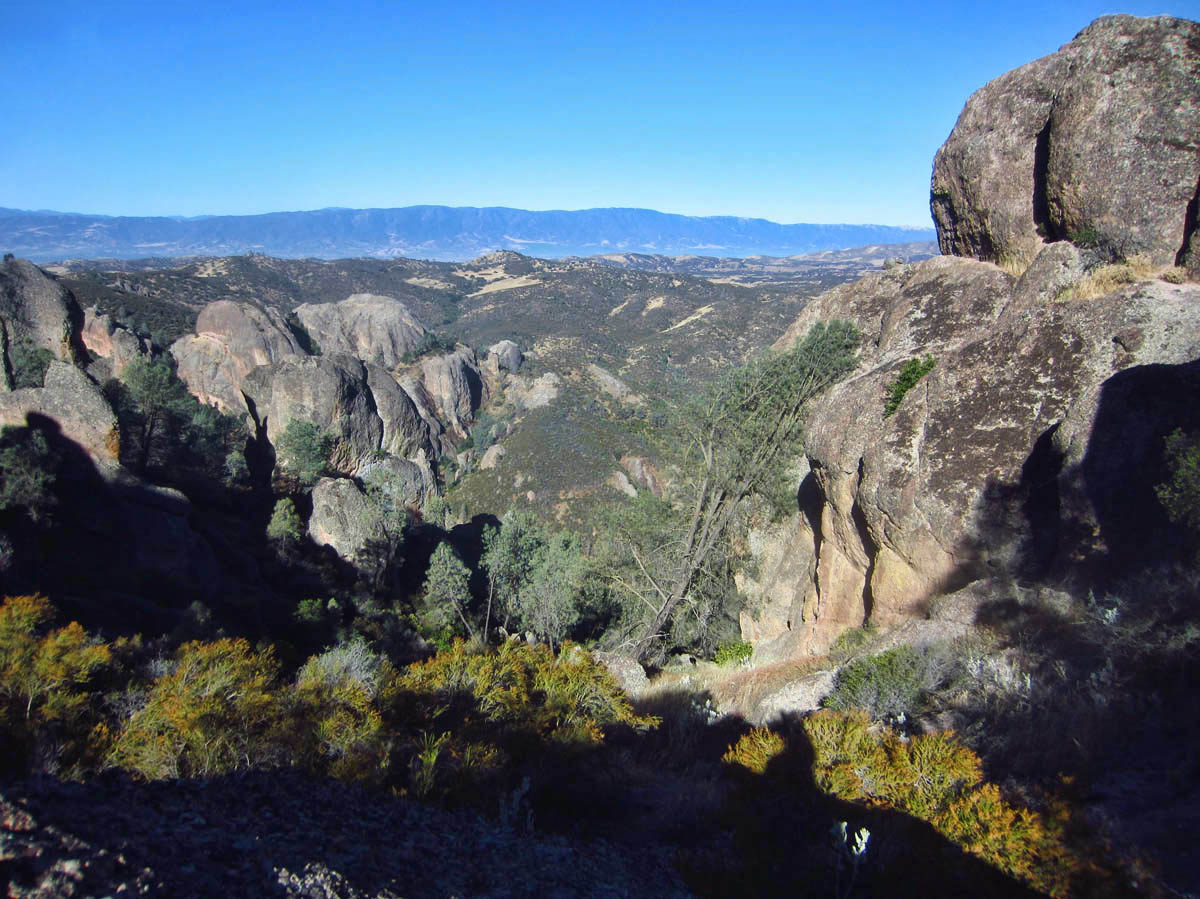 Pinnacles has a Condor Reintroduction program, whereby captive-bred birds are released to live in the wild. 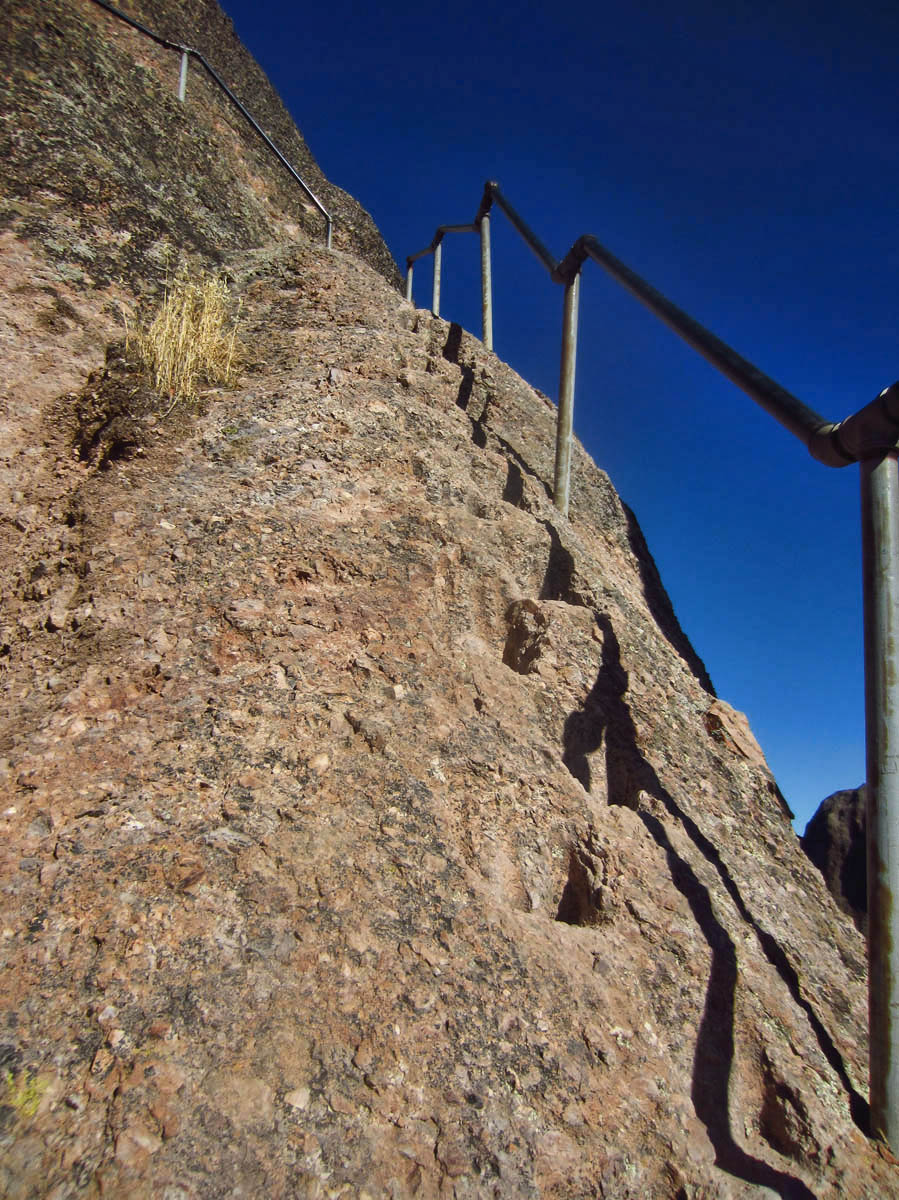 Though fun at first, I am relieved to get this “High Peaks” section of the loop behind me. 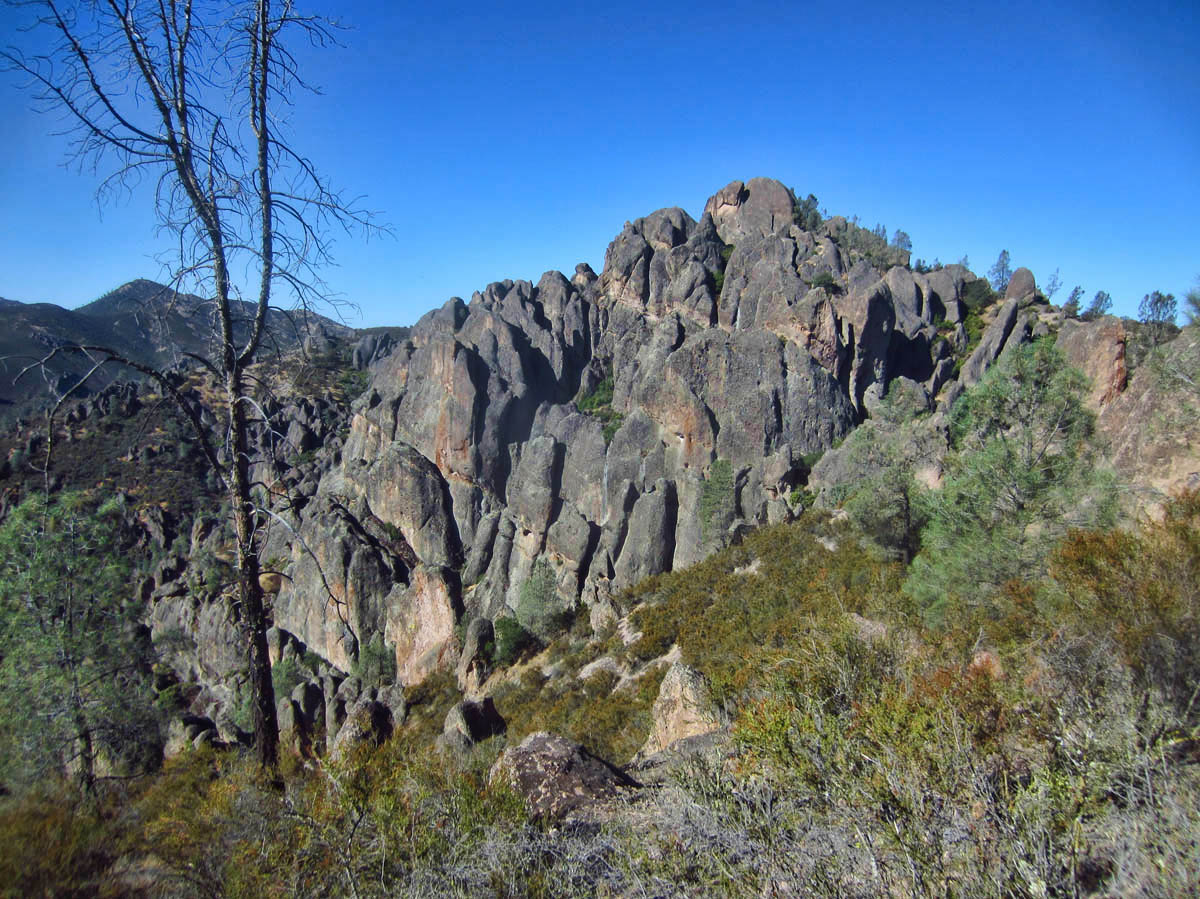 Condors like to roost in these rocks, though I did not see any. 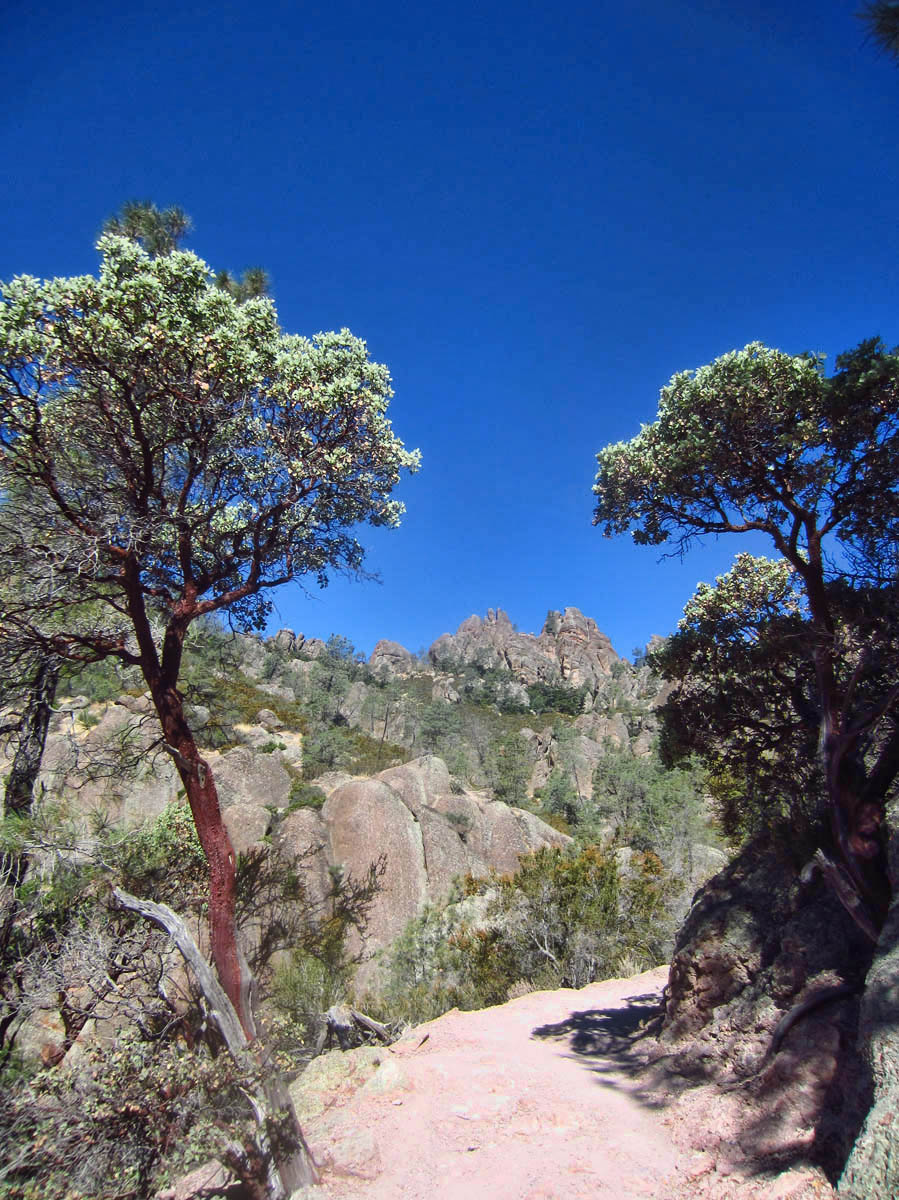 Lots of beautiful Manzanita trees in the park.

Pinnacles is a nice little park. Scenic. Well signed trails. Lots of climbing routes for rock climbers. It’s also a refuge for the endangered California Condor. But should it be a “Park?” In my opinion, they did well with “Monument.”