After four quiet, serene nights in Kings Canyon’s Azalea campground where I enjoyed a spacious pull through with my entire passenger side windows and doors opening out into the forest, I move just 18 short miles “across the border” to Sequoia National Park.   I figure as a self-proclaimed National Park junkie, I need to sleep in both camps.

But it’s approaching the weekend, and I read online that weekends come at a premium in Sequoia NP, so I go online and find the preferred campground, Lodgepole is sold out.  I get the last remaining spot in Dorst Creek Campground, seven miles from the main area.  Recreation.gov says the site is 24 feet, but my front headlight sticking out in the road says it’s more like 22.   For all the spacious quiet I had in Kings Canyon, there will be none of that here.   I have tents outside my back window and a pop-up beside me.   The “H” Loop is down in a hole, which amplifies the noise and intensifies smoke from the campfires all around.   It’s opening weekend for Dorst Creek Campground, and the Coleman Stoves are out in force. 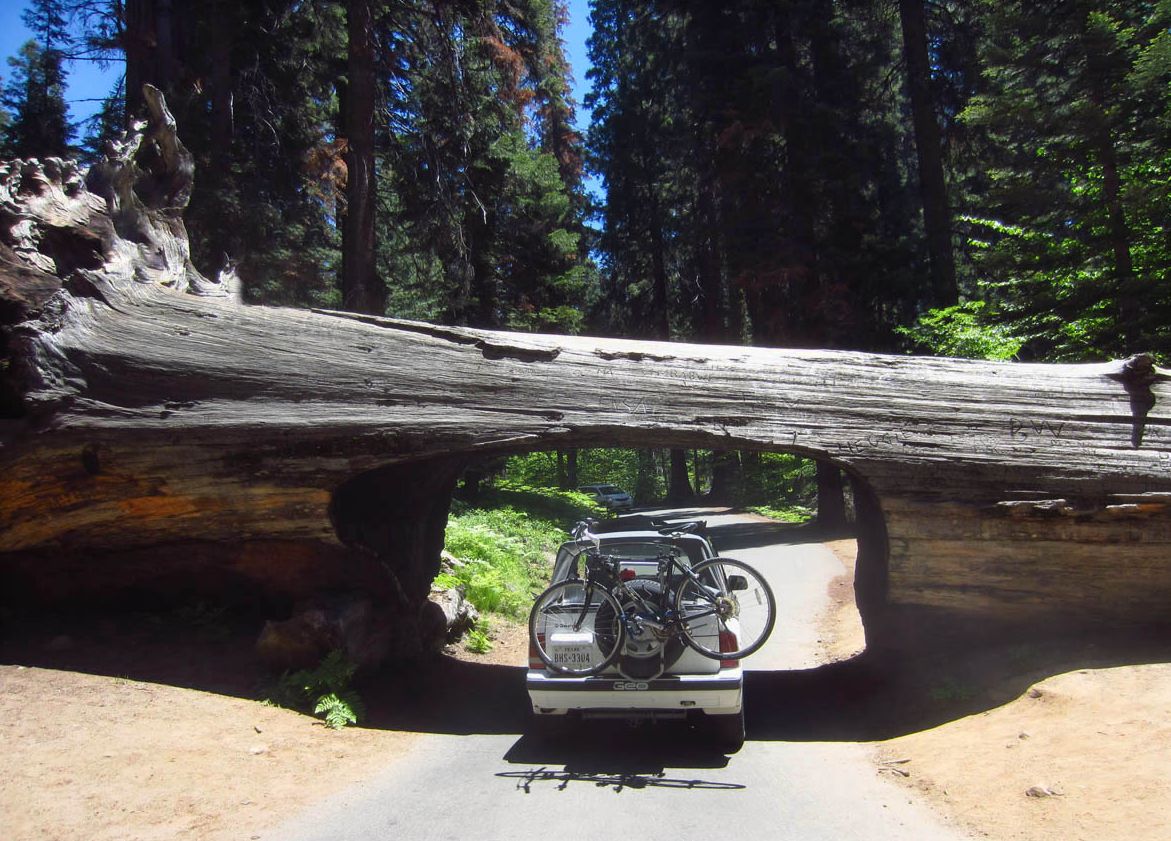 “Tunnel Log” is a bit of a throwback. They don’t do this anymore. 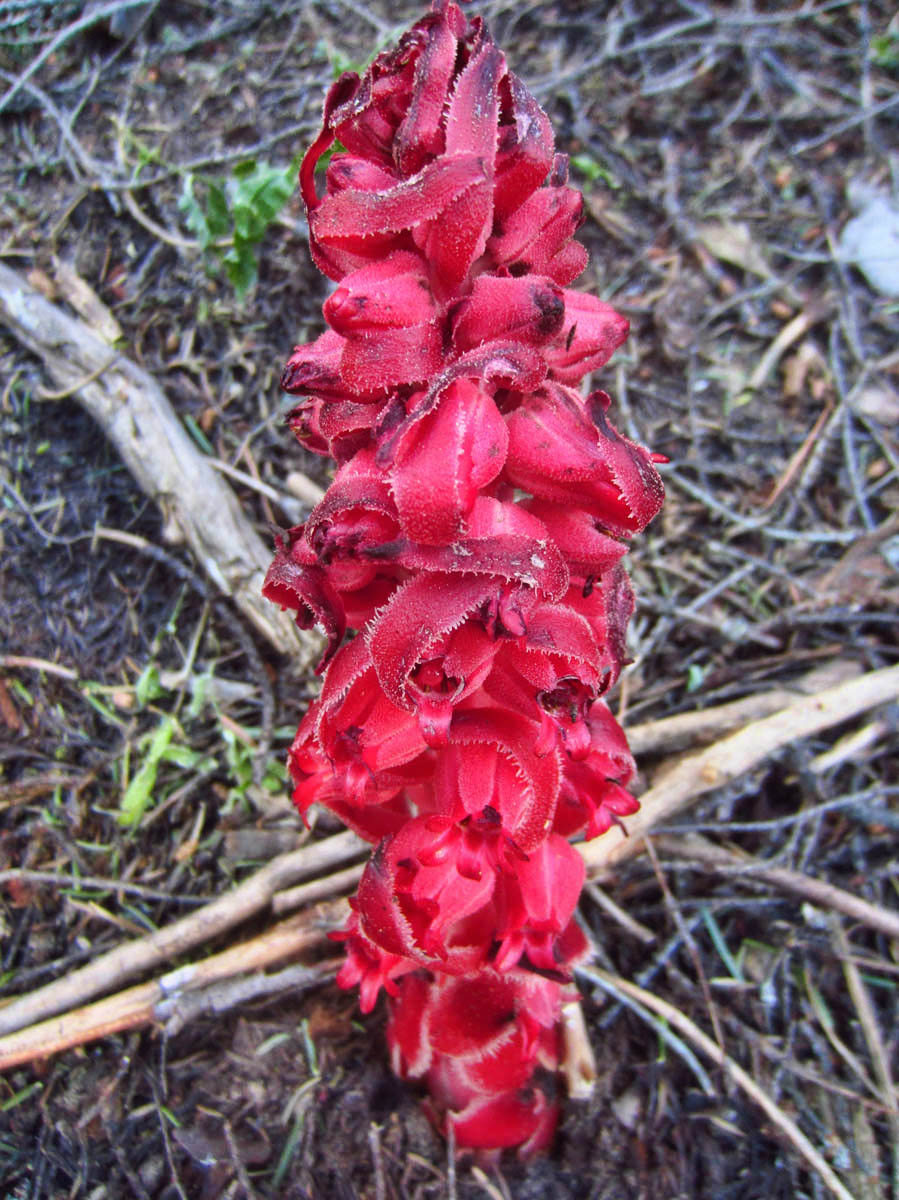 Snow Plant, or Sarcodes. It has no chlorophyll; it derives nutrition from fungi underneath the soil. 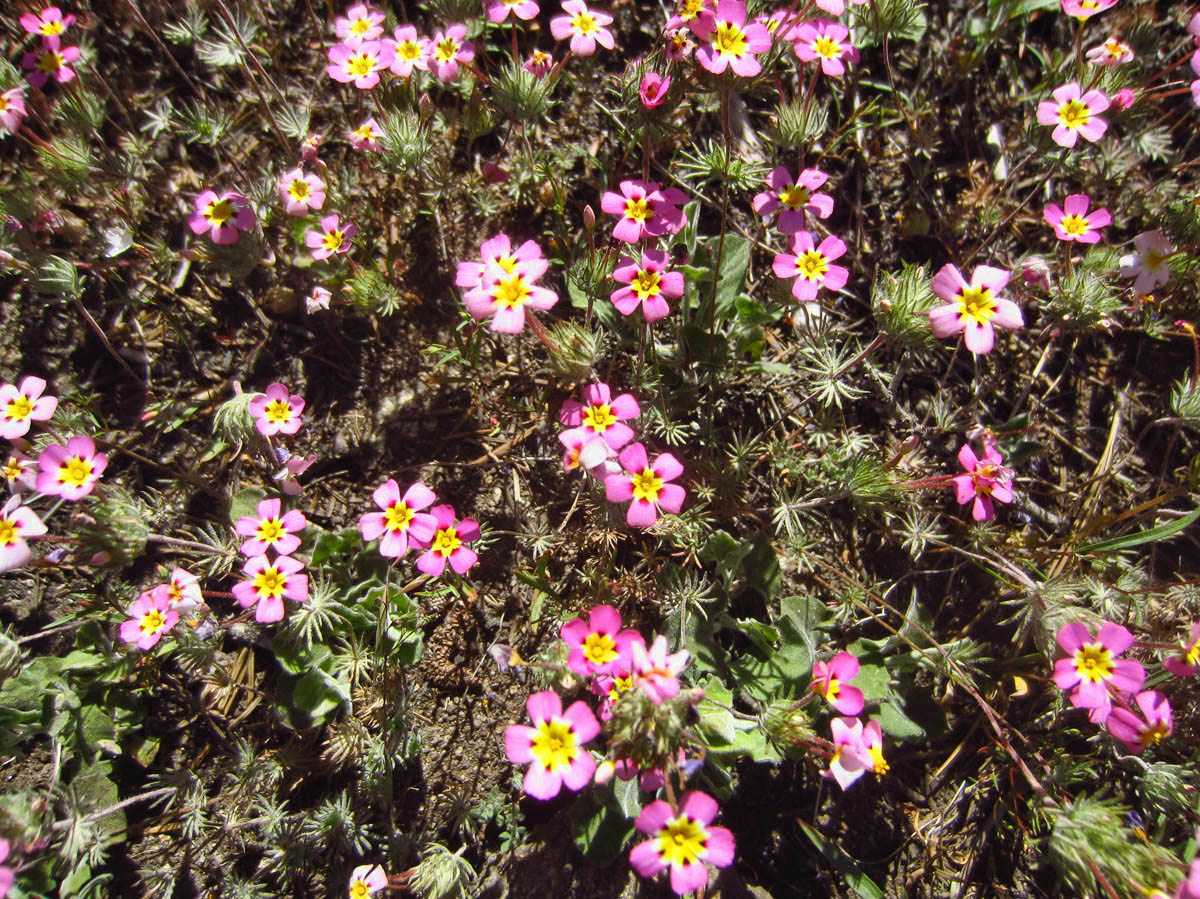 I have only two days to explore the park, so I get an early start to see some of the highlights.  But Sequoia is a bit of a “drive through” park with many of the attractions being right off Highway 198, so traffic builds quickly.  A drive through “Tunnel Log” is a breeze heading into the center of the park, but when I return a couple of hours later, there is a traffic jam lined up for the requisite photo stop under the log.

I want to climb the 400 steps to the top of Moro Rock, and hope that given the steepness of the climb, it will not be too heavily trafficked, especially this early in the morning.  I had hoped the fact that the shuttle only ran on weekends meant that Fridays were a lighter day.   But It’s a steady stream of people climbing the stairs, many who are beyond their comfort zone, or too small to be on a trail so steep, narrow and crowded. 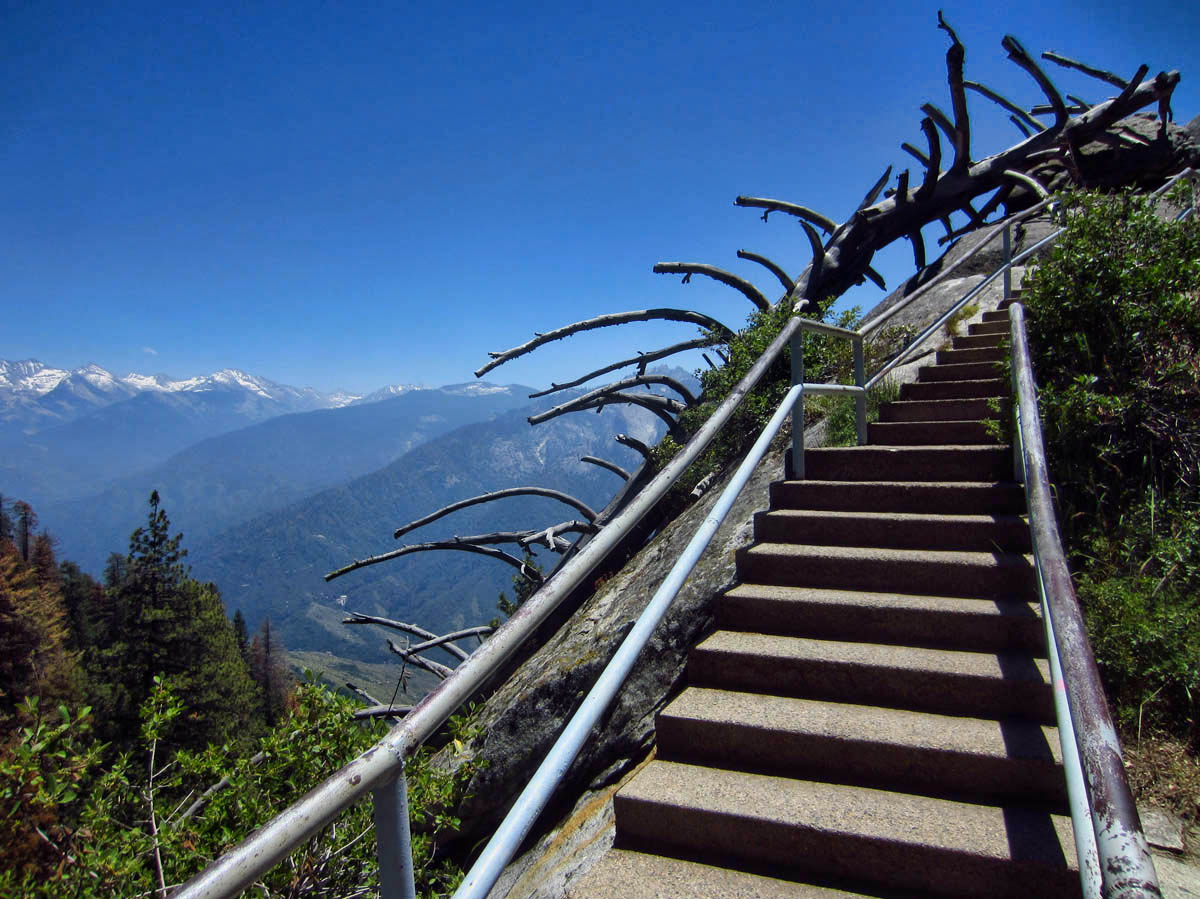 Staircase leading up to Moro Rock. 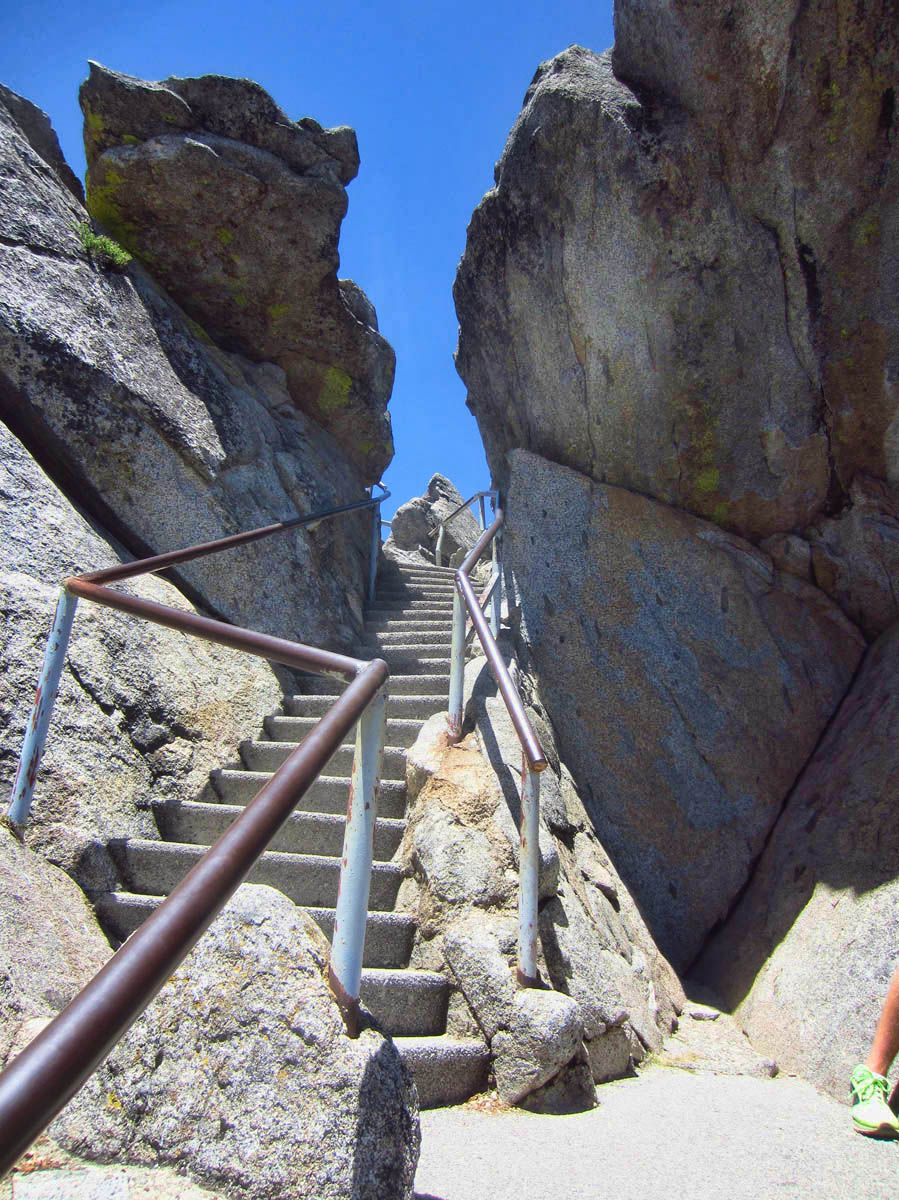 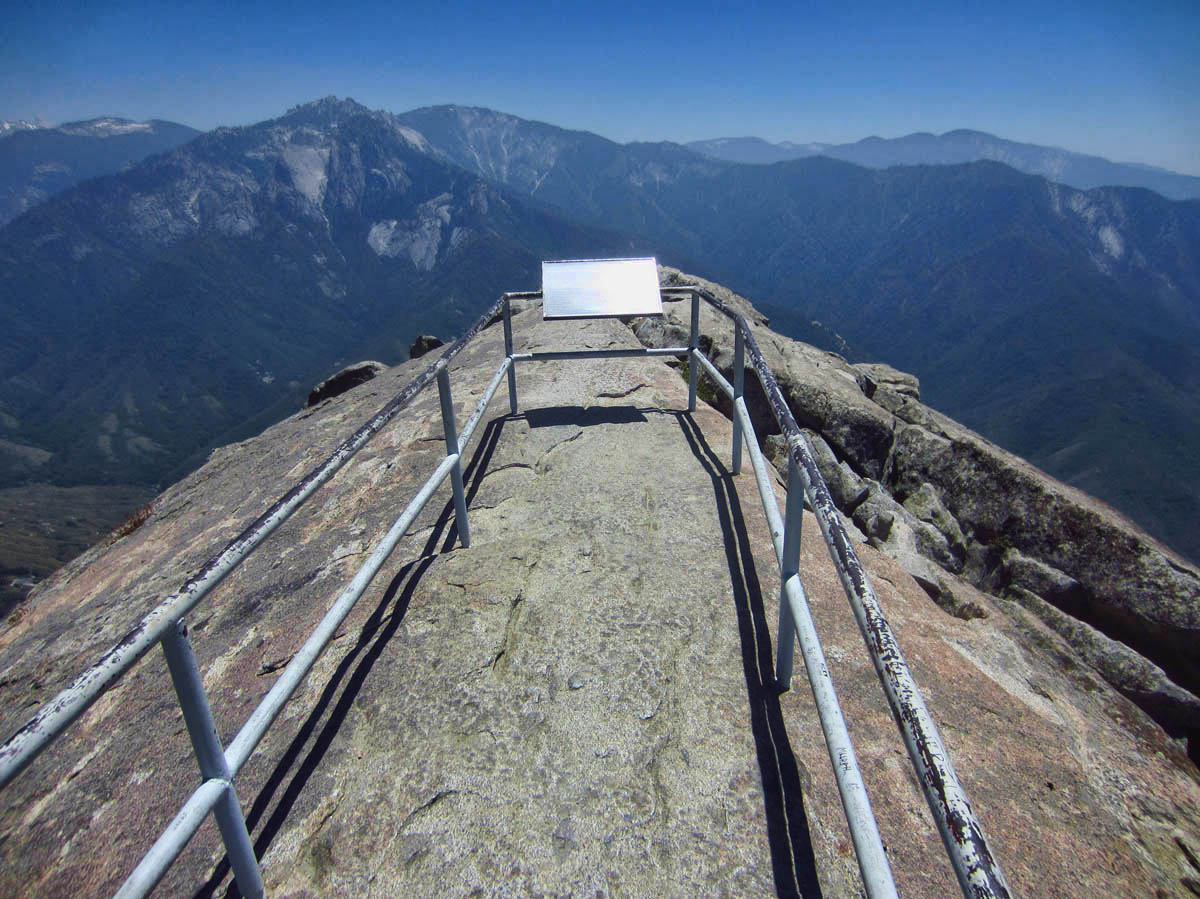 View from the top of Moro Rock.

It’s never the height that scares me on a climb like this.  It’s the people who are more focused on finding a signal than they are on safety.   While Moro Rock is considered the premier hike in the park, just 100 ft away is a beautiful trail that links Moro Rock to Crescent Meadow, with gorgeous views of the monolith and the Western Divide.  But no one is on it.   I hike for six miles and never see another soul.  No, they are all jammed up back on Moro Rock. 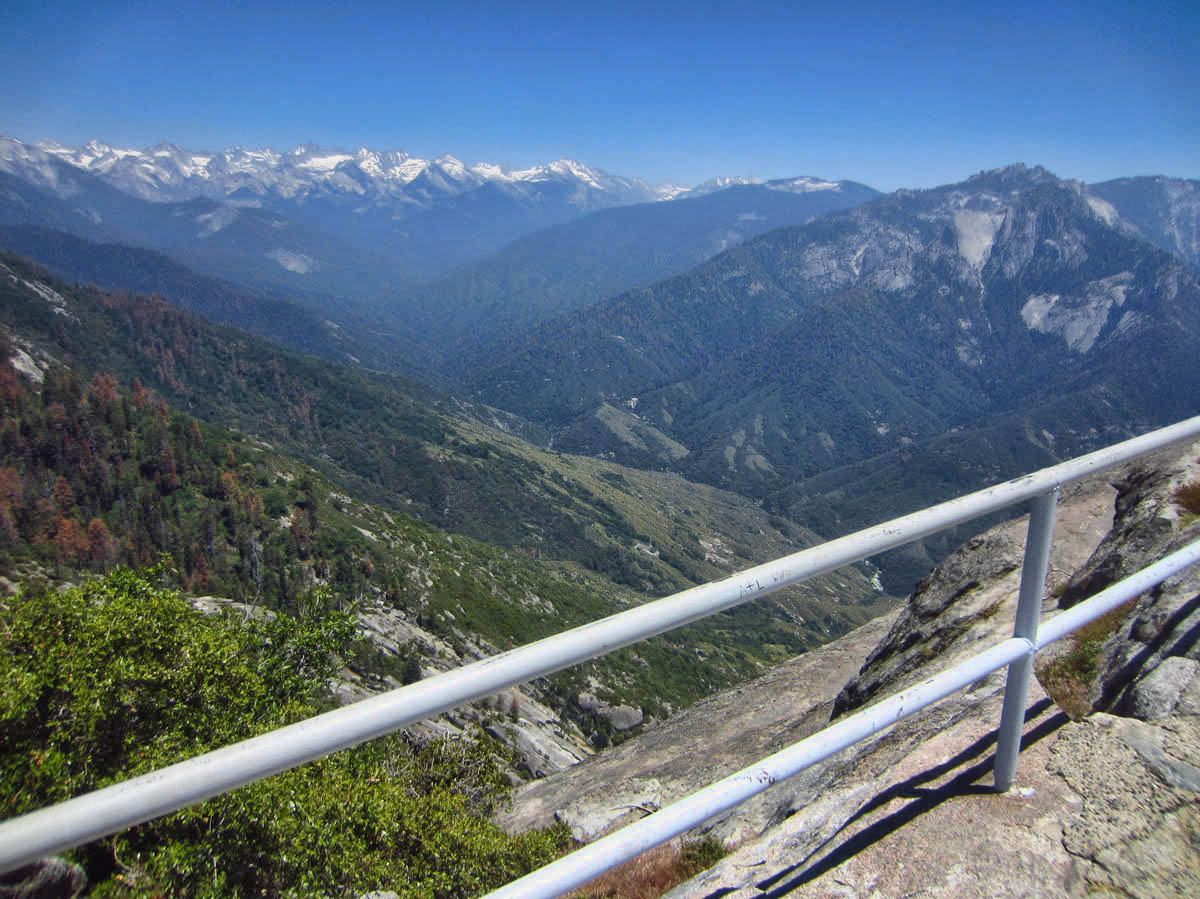 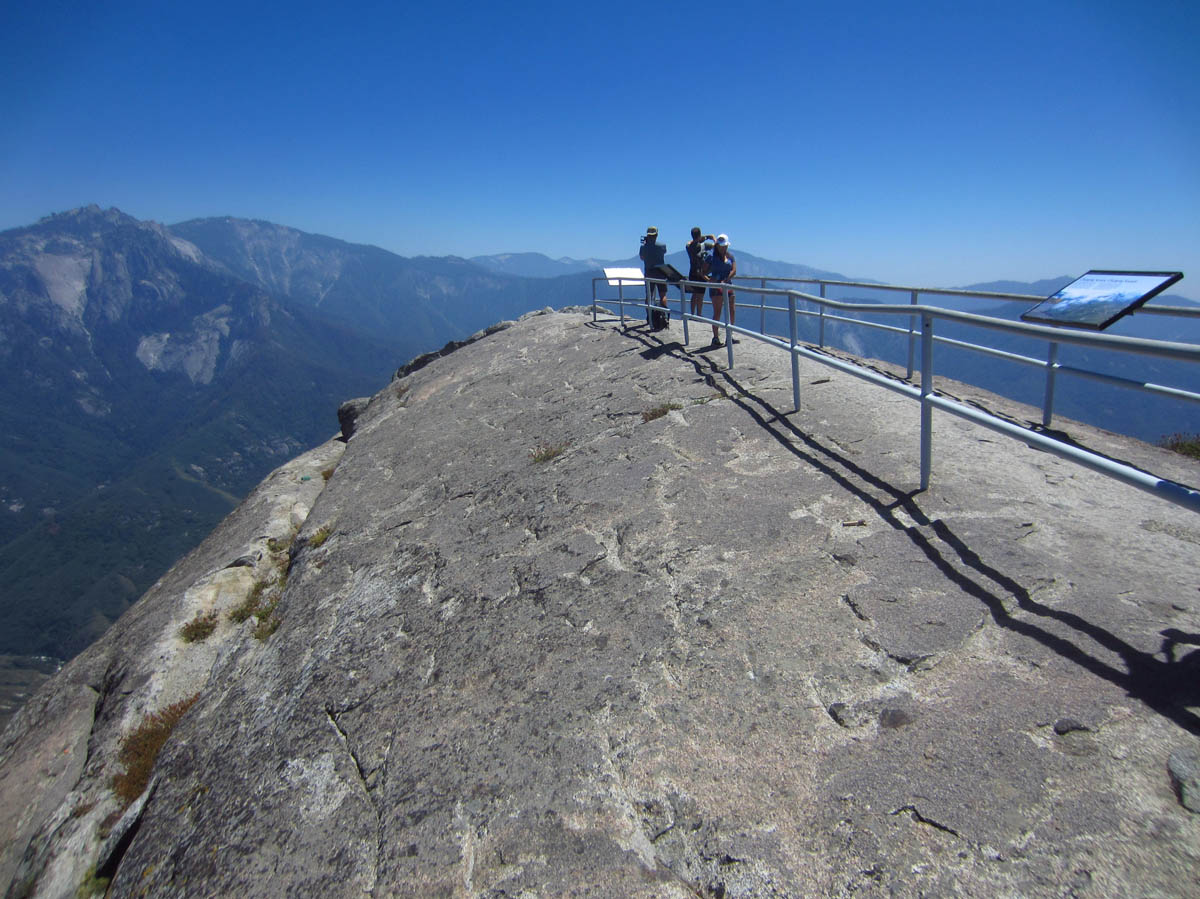 I had to wait quite a while to get this few people in the photo. 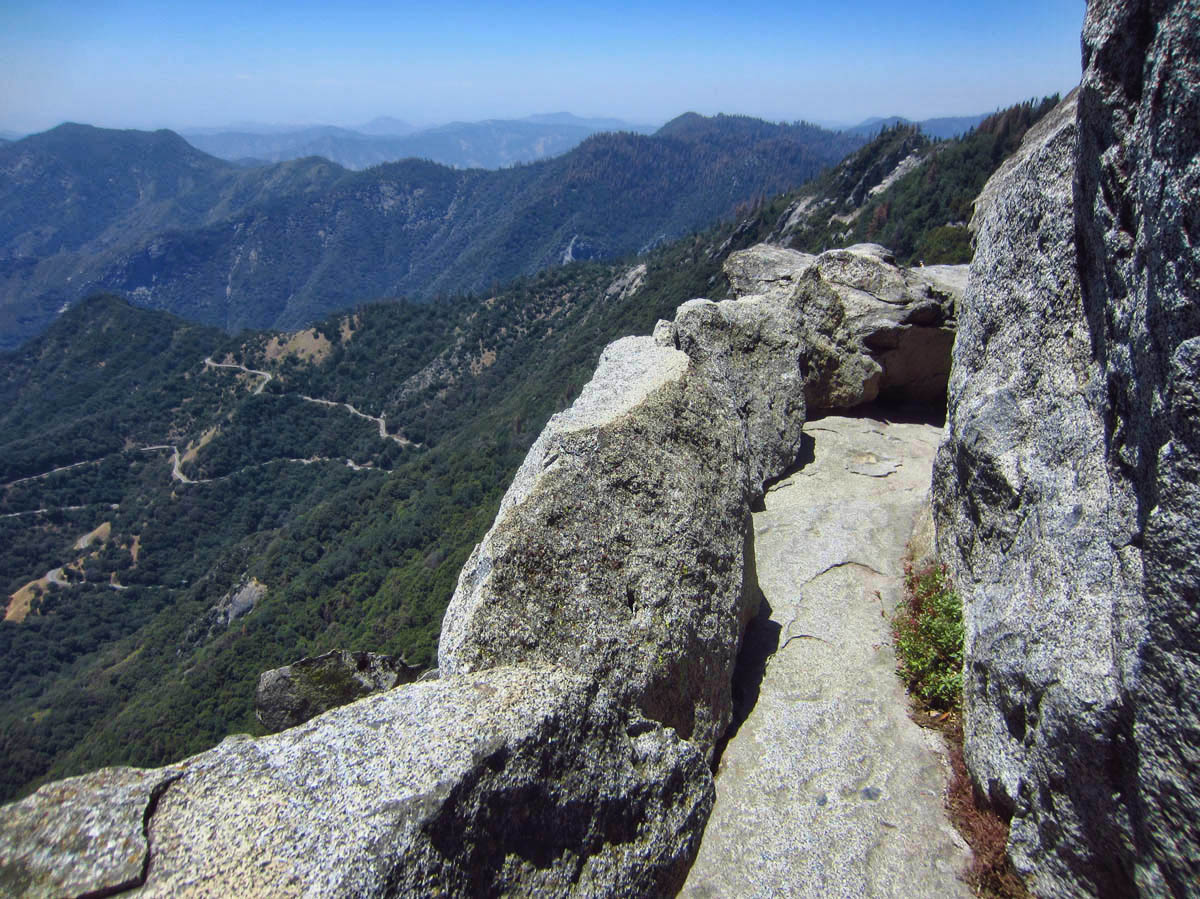 Much of the trail is quite narrow. 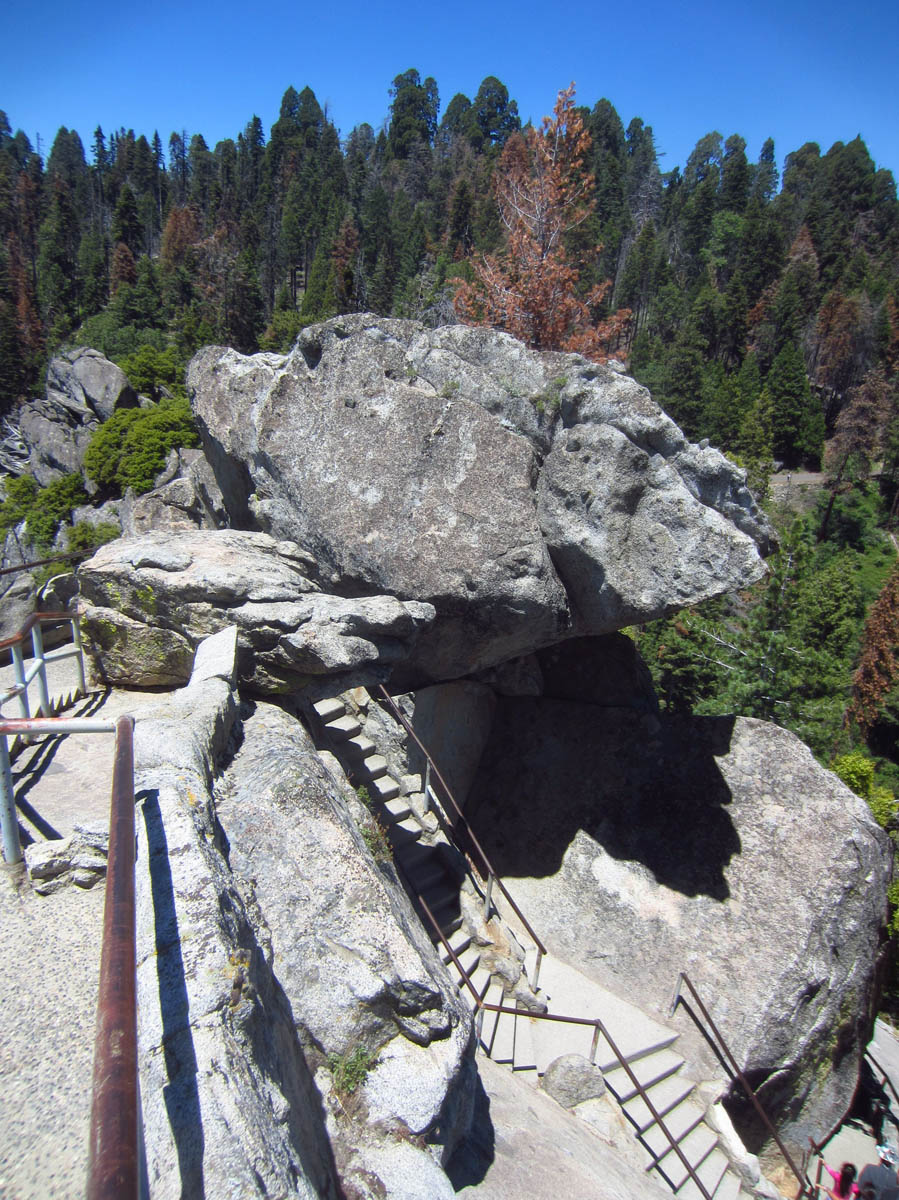 The road to the Giant Forest Grove ends at the Giant Forest Museum.  I can’t help but ponder the irony of Joni Mitchell’s lyrics, “They took all the trees and put ‘em in a tree museum.  And they charged the people a dollar and a half just to see ‘em.” 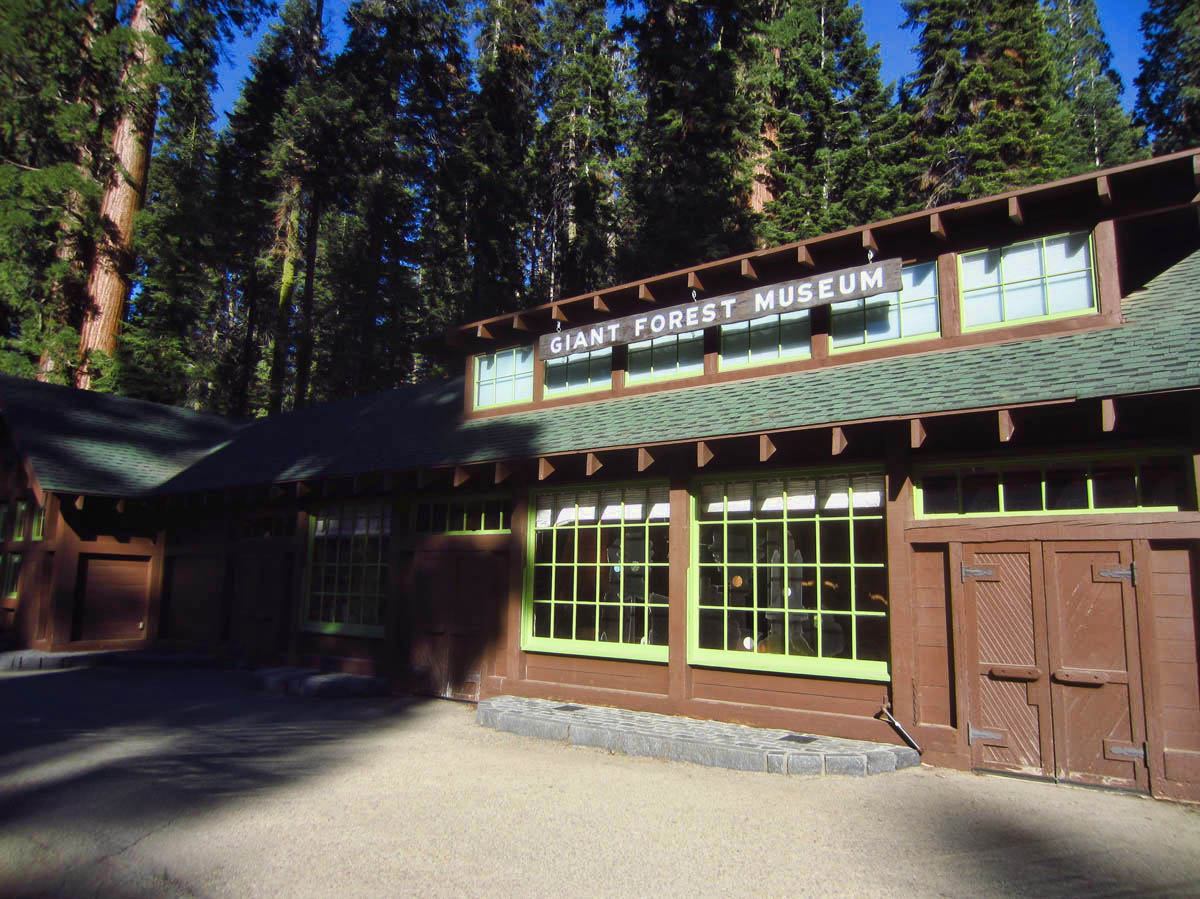 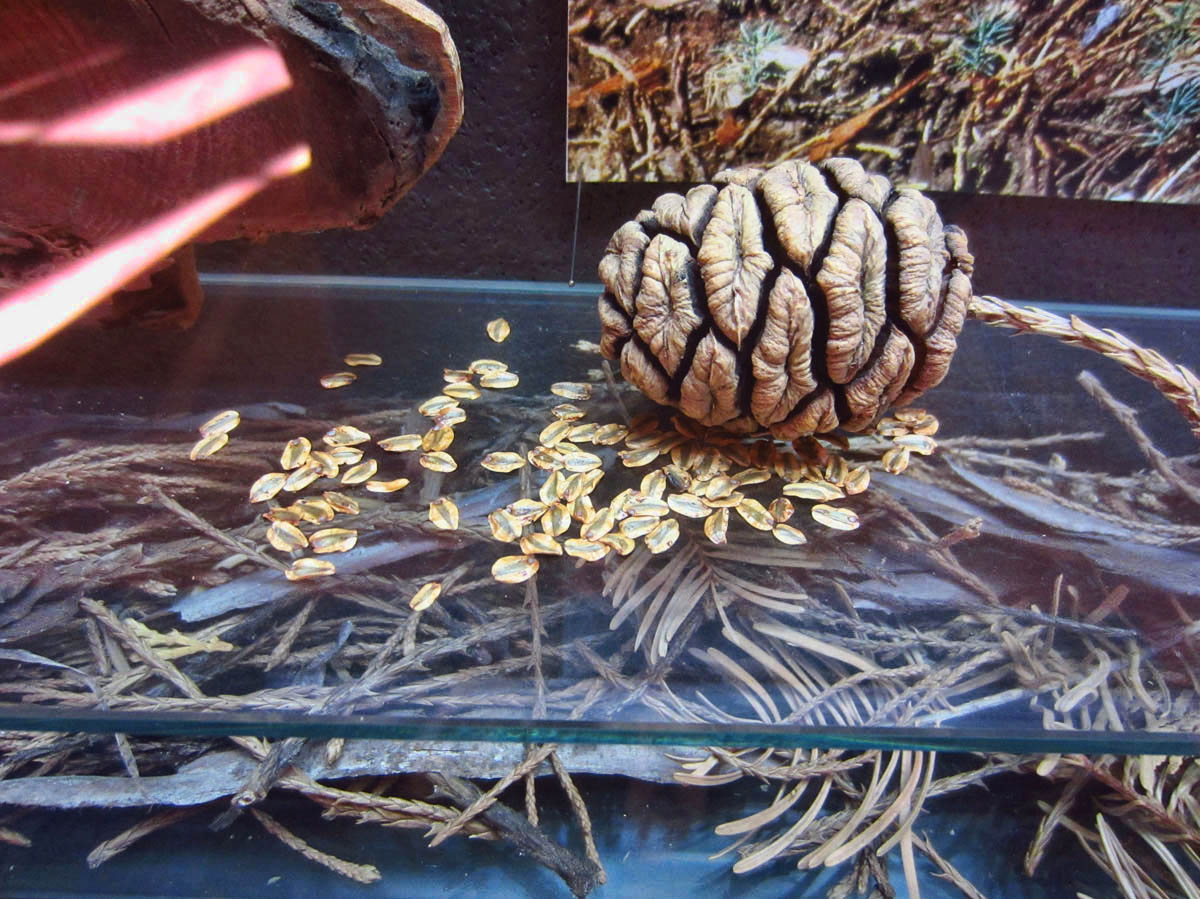 This is a sequoia cone. The seeds are the size of oatmeal flakes. 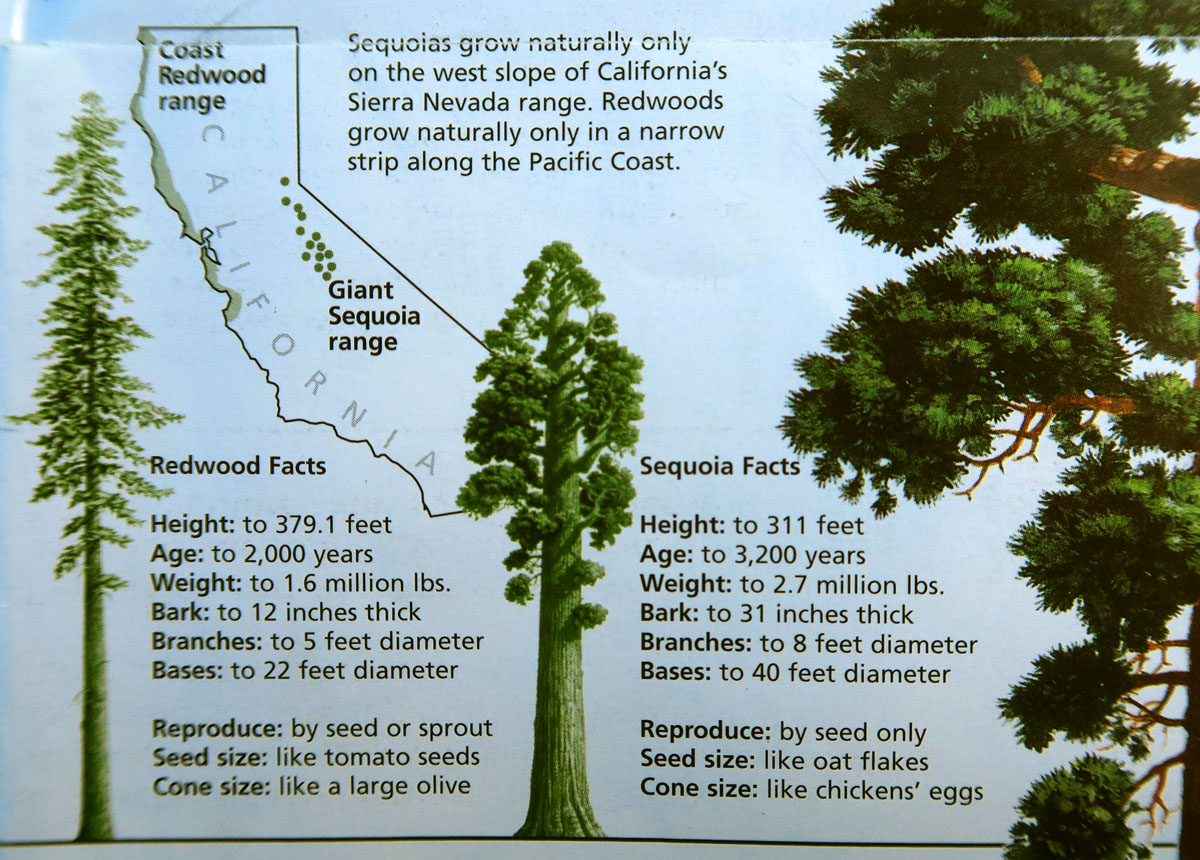 This illustration from the NPS brochure shows the vast differences between California Redwoods (thinner tree on left) and the Sequoias (beefier tree on right.) Prior to my visit, I thought they were one and the same. 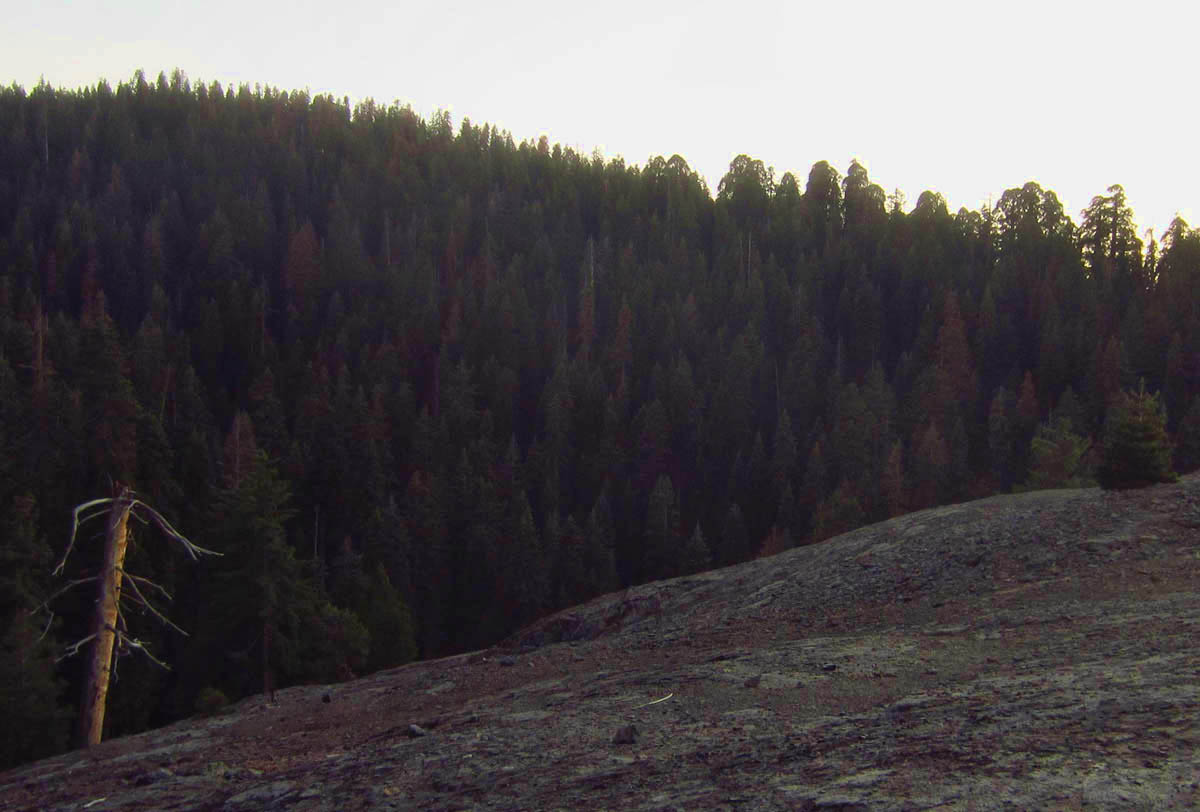 Here’s a bad photo, but an easy way to recognize a sequoia grove. See how all the trees on the left are slim and pointed, while the sequoia grove on the right has thicker, rounded tops?

Many of the giant sequoias are behind fences now for their own protection.  In the early days, it took the Calvary to protect them from loggers, whereas the current times, they have fences to protect them from bloggers.  One cannot get close enough to touch the bark or hug the tree because there are morons out there who think it is clever to carve their names into the skin of these thousand year old stately beauties. 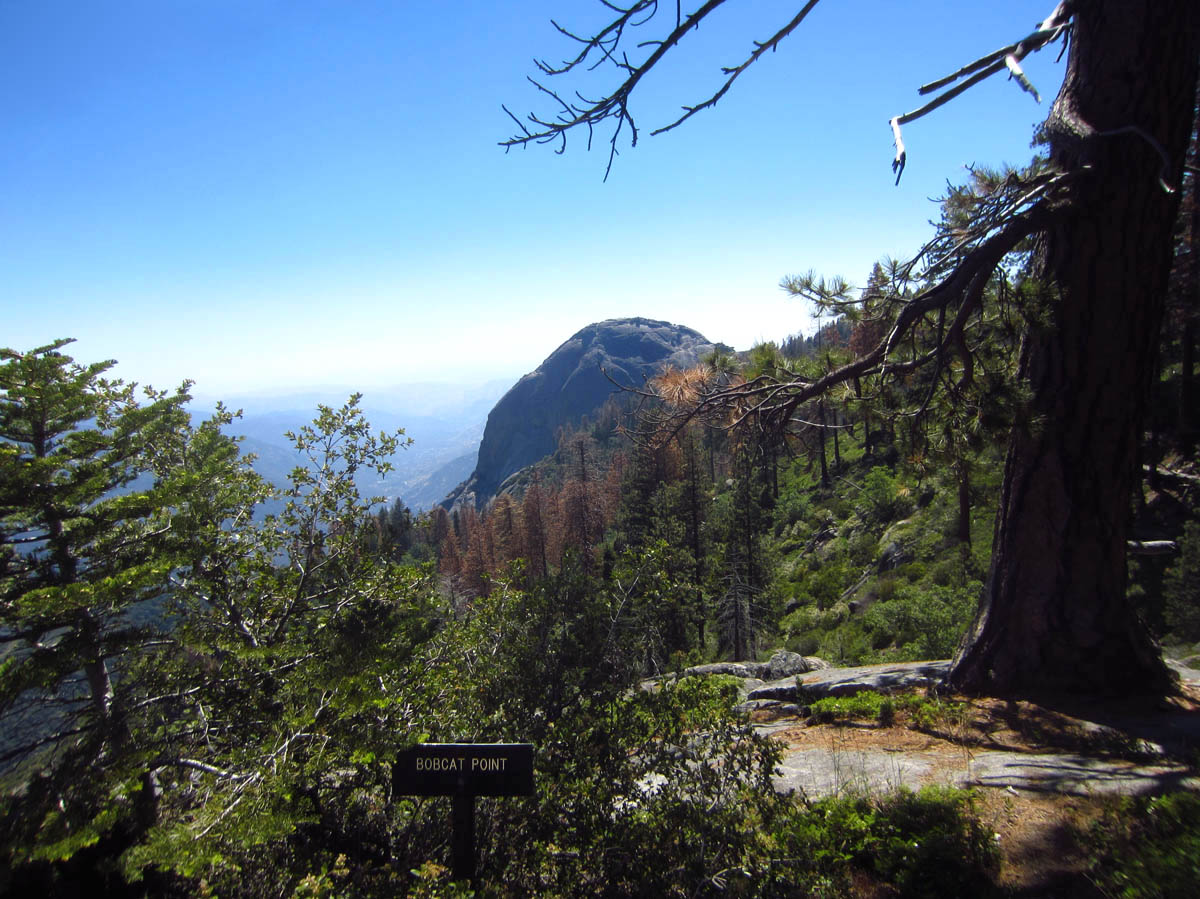 View of Moro Rock from Bobcat Point, on the Sugar Pine Trail. If I could zoom, you would see dozens of people up there. 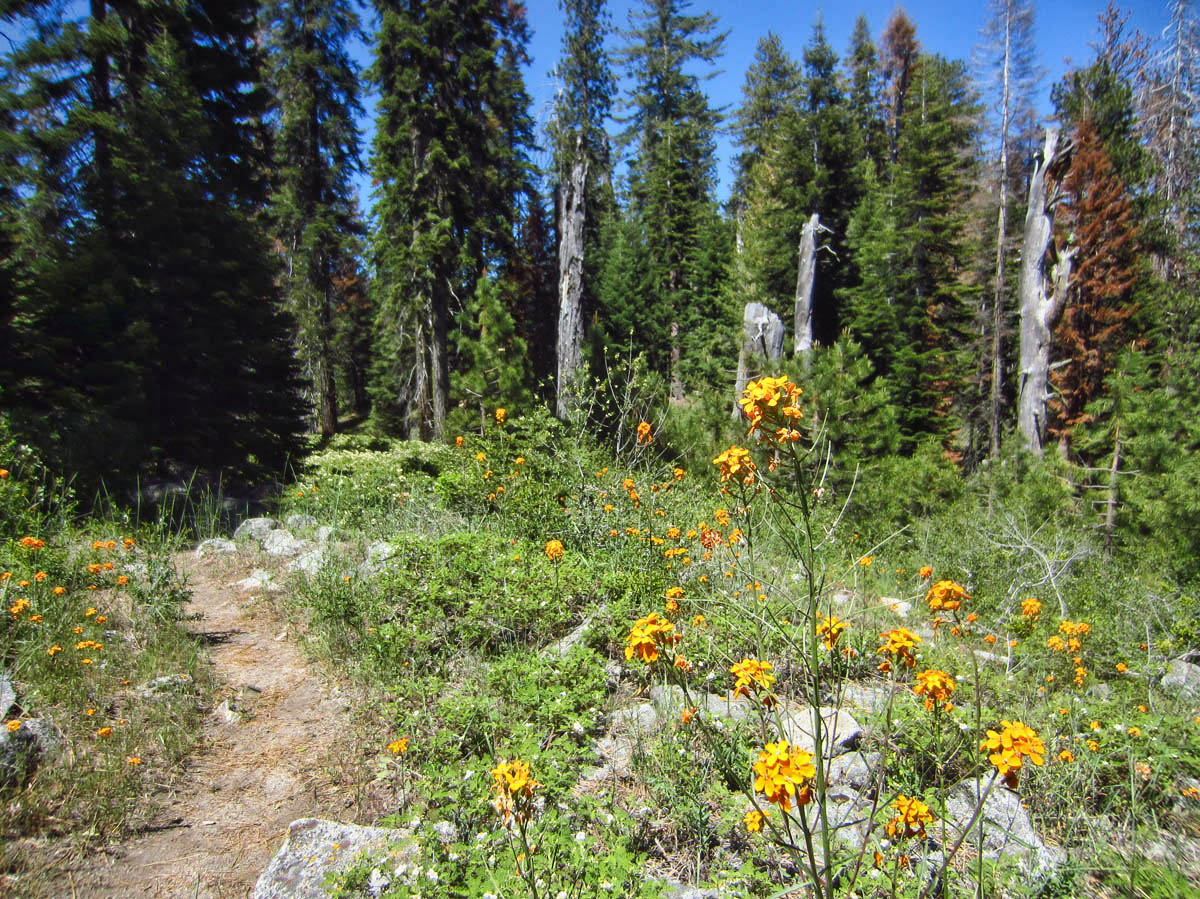 The Sugar Pine Trail is a lovely hike with lots of wildflowers and no people.

The most famous of these trees, General Sherman, the largest sequoia in the world, can’t be seen while driving along.  One must actually get out of the automobile for a look at the 2,000 year old tree.  It has its own dedicated paved path leading tourists to the center of the Giant Forest Grove, where the tree is surrounded by fencing.  The half mile paved path descends 200 feet down into the grove with benches and motivational milestones along the way to encourage the weary tourists, “You’re halfway there!” 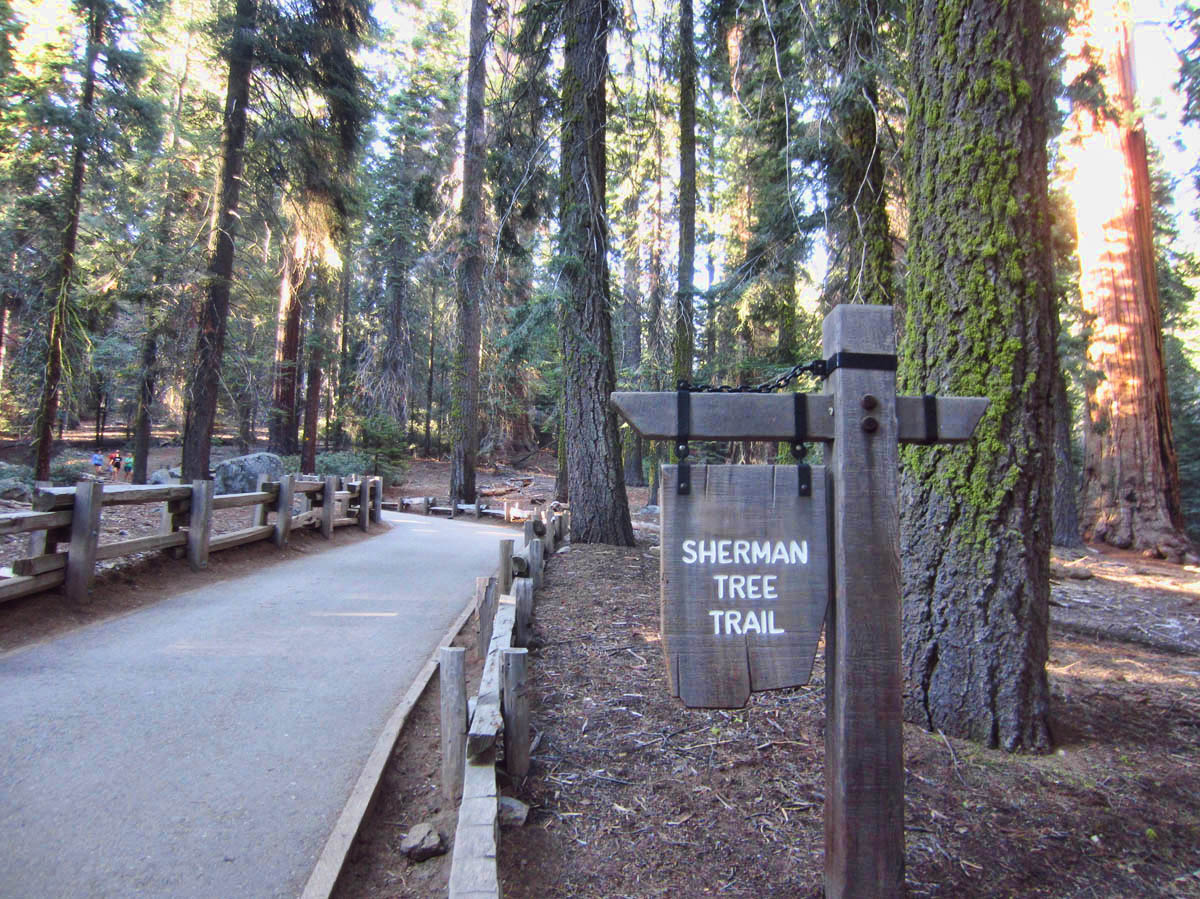 General Sherman has his own trail 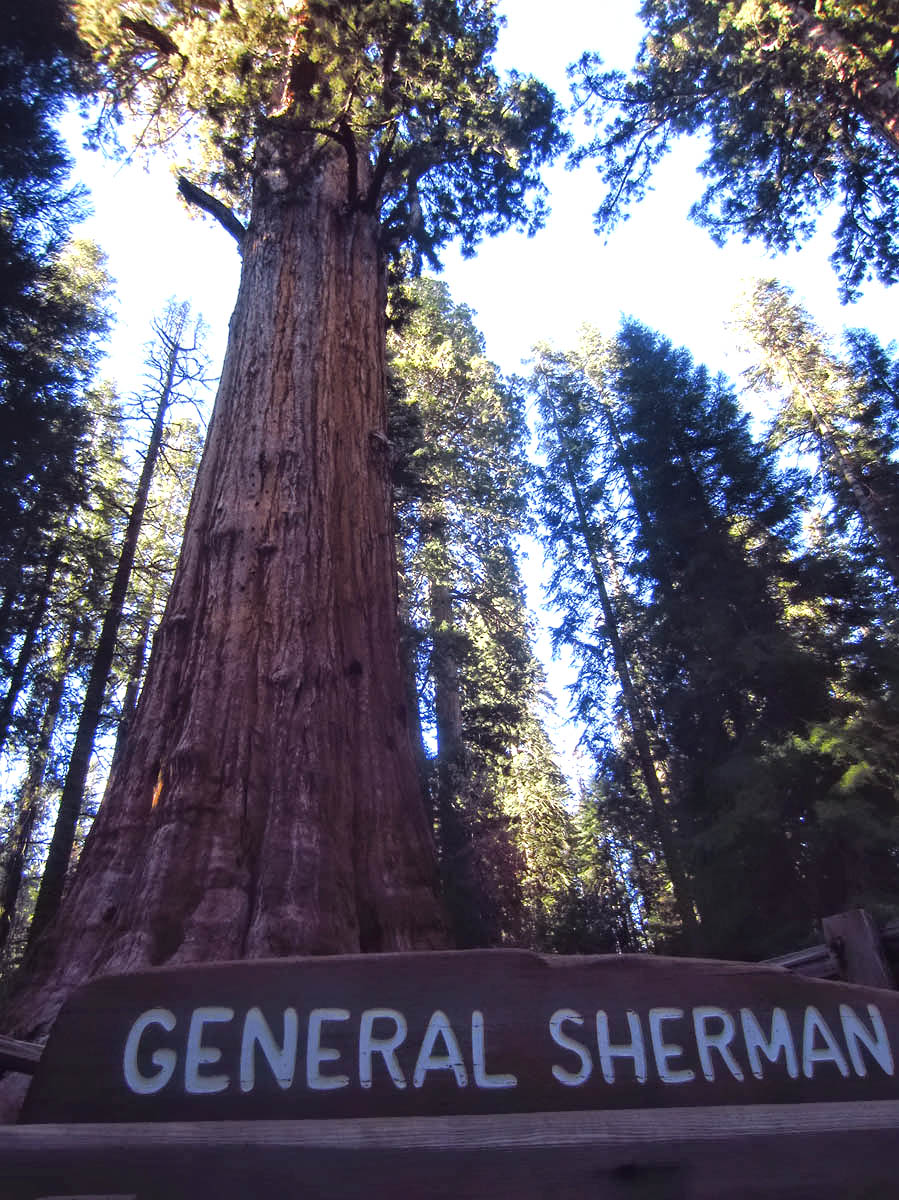 While circling the Crescent Loop Trail, word gets out that there is a mama bear and a cub across the meadow. People start running. Given the number of “bear bells” I have heard in the park, one might think people were running from the bear, but no, they are running towards it. The Ranger gallops across the meadow, his rubber-bullet loaded rifle slamming against his chest. He calls for back-up on the two-way. They have to cordon off the bear to keep people away. The Ranger is literally yelling, “Keep moving, people!! Keep moving!” It’s quite a spectacle of paparazzi while the bears are trying to have lunch. 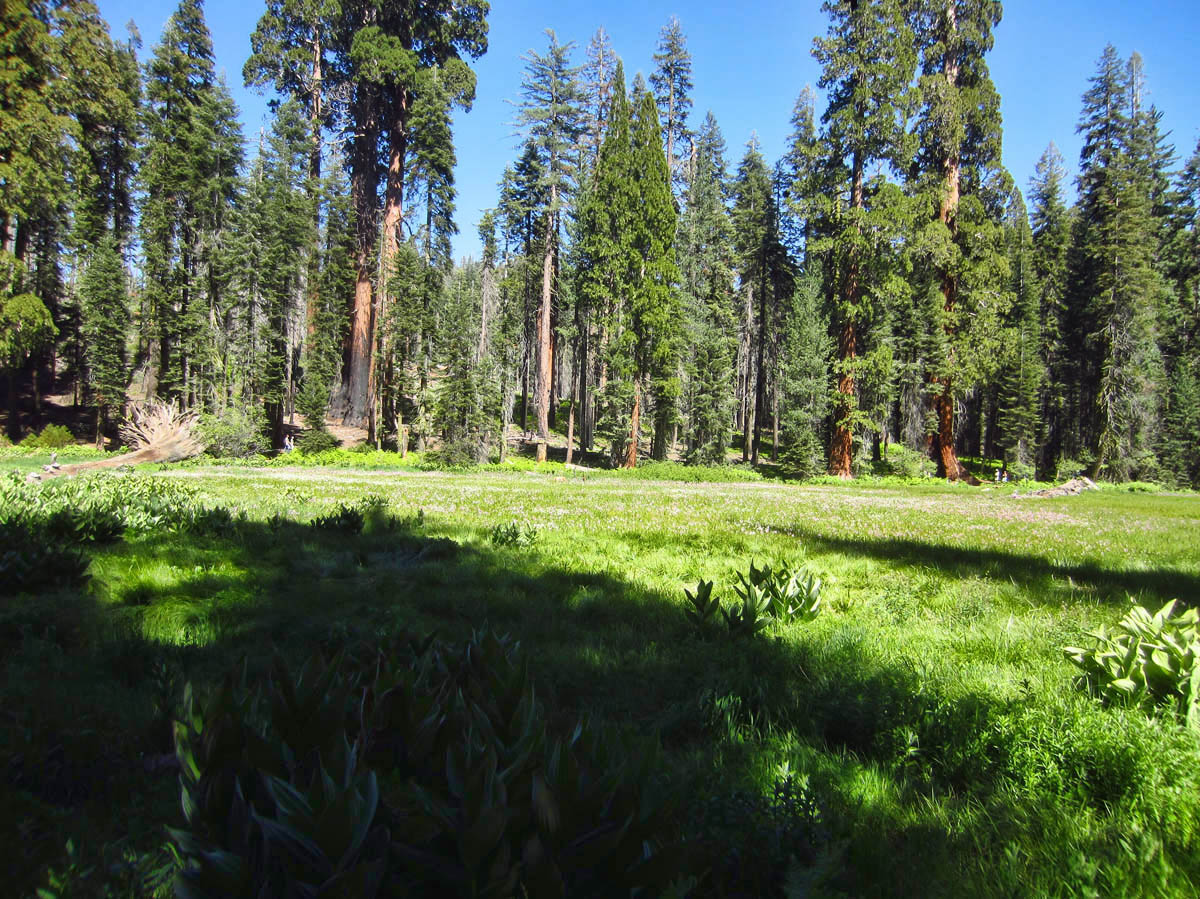 Crescent Meadow Loop Trail. If the zoom wasn’t broken on this $99 Canon ELPHie, you would see a mama bear and her cub across the meadow. 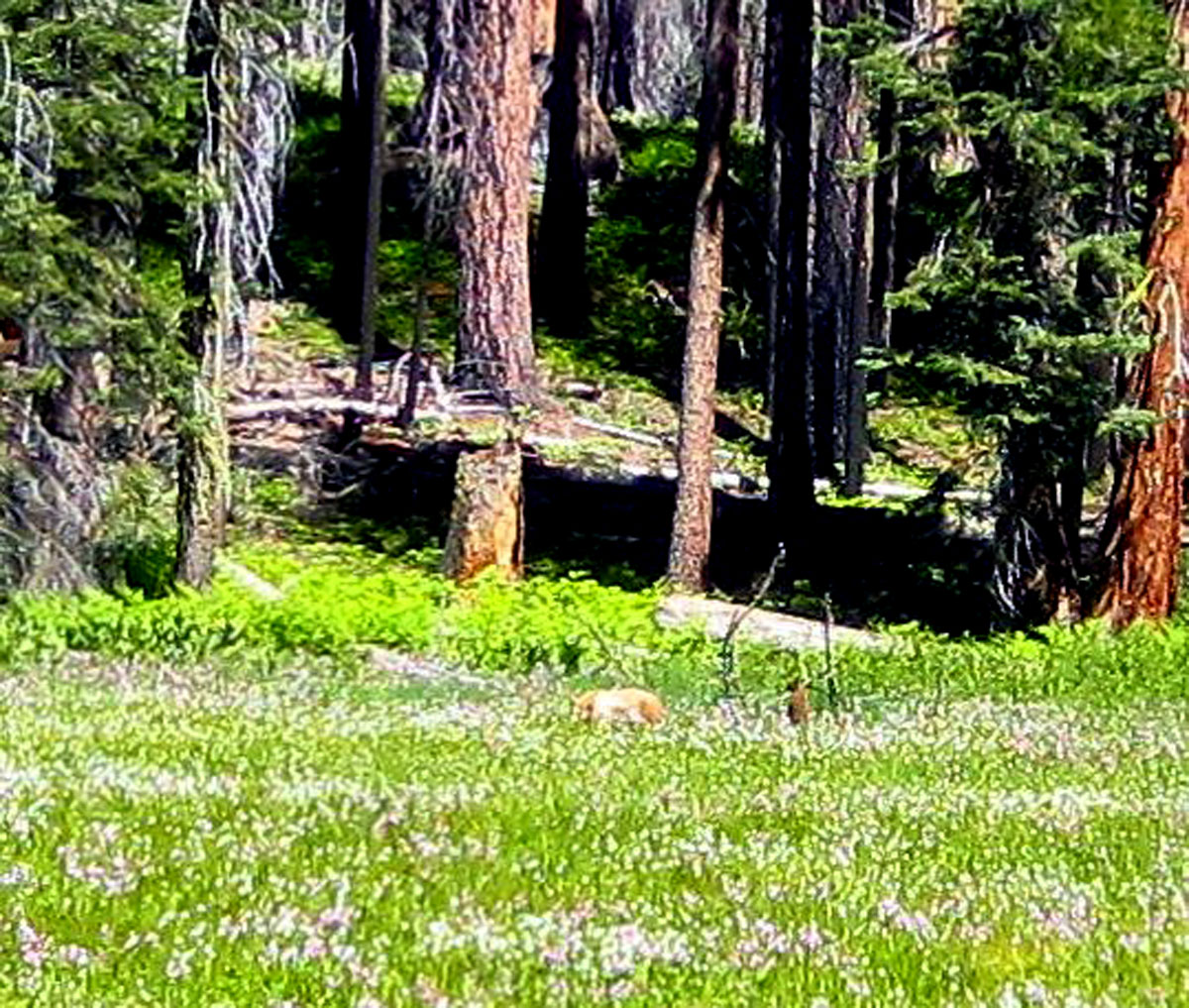 Now can you see them? Mama on the left, baby standing up on his haunches on the right. (This is a cropped postage stamp of previous photo, which is why it’s so grainy.)

On my last day in Sequoia National Park, I am longing for a bit of solitude amidst these giants. I want to get away from the crowds and be in a place and state of mind where I can truly appreciate the magnitude, the age, the conditions that must be just right for these majestic beauties to thrive. I plan a double strategy – a way to escape the crowds and the campfire smoke both at the same time. There is a 2.5 mile OW hike into the Muir Grove that departs from the Dorst Creek campground. I will time this hike for the late afternoon when the crowds are back at camp and the campfires are just being started.

The Muir Grove trail, a beautiful trail that leads through sugar pine, red and white fir trees, follows Dorst Creek through the forest. The trail is carpeted with fragrant fallen needles that soften the sound of my footsteps through the woods.  The sun is casting a horizontal beam of golden light through the dense forest.  Although the brochure says it’s only 2 miles to the Muir Grove, it ends up being 2.5 miles according to my Backcountry Navigator app, so I have to hurry to spend time with the trees before sundown.   By the time I reach the grove, I am beyond my turn around time, and practically sprinting.   But it’s 2 nights before the full moon, and I have a flashlight and fresh batteries. 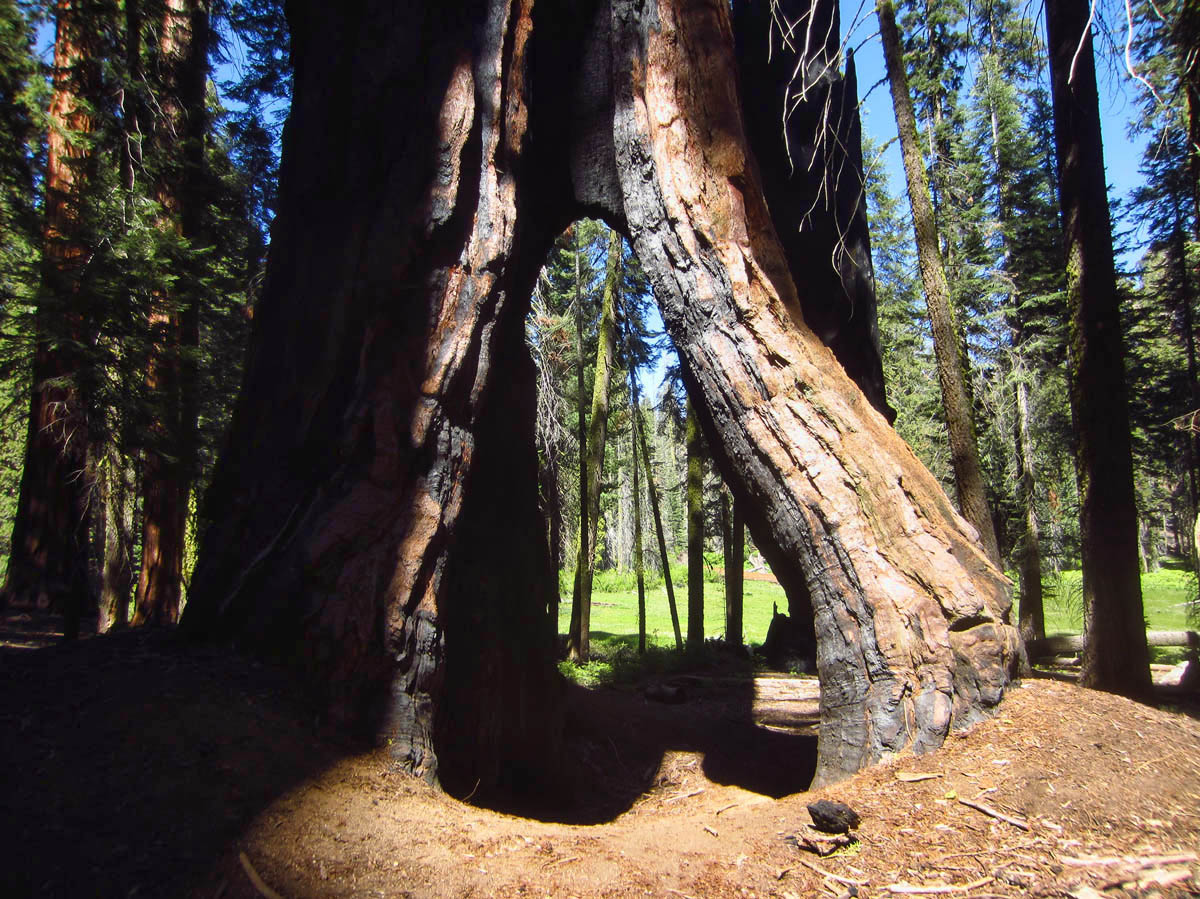 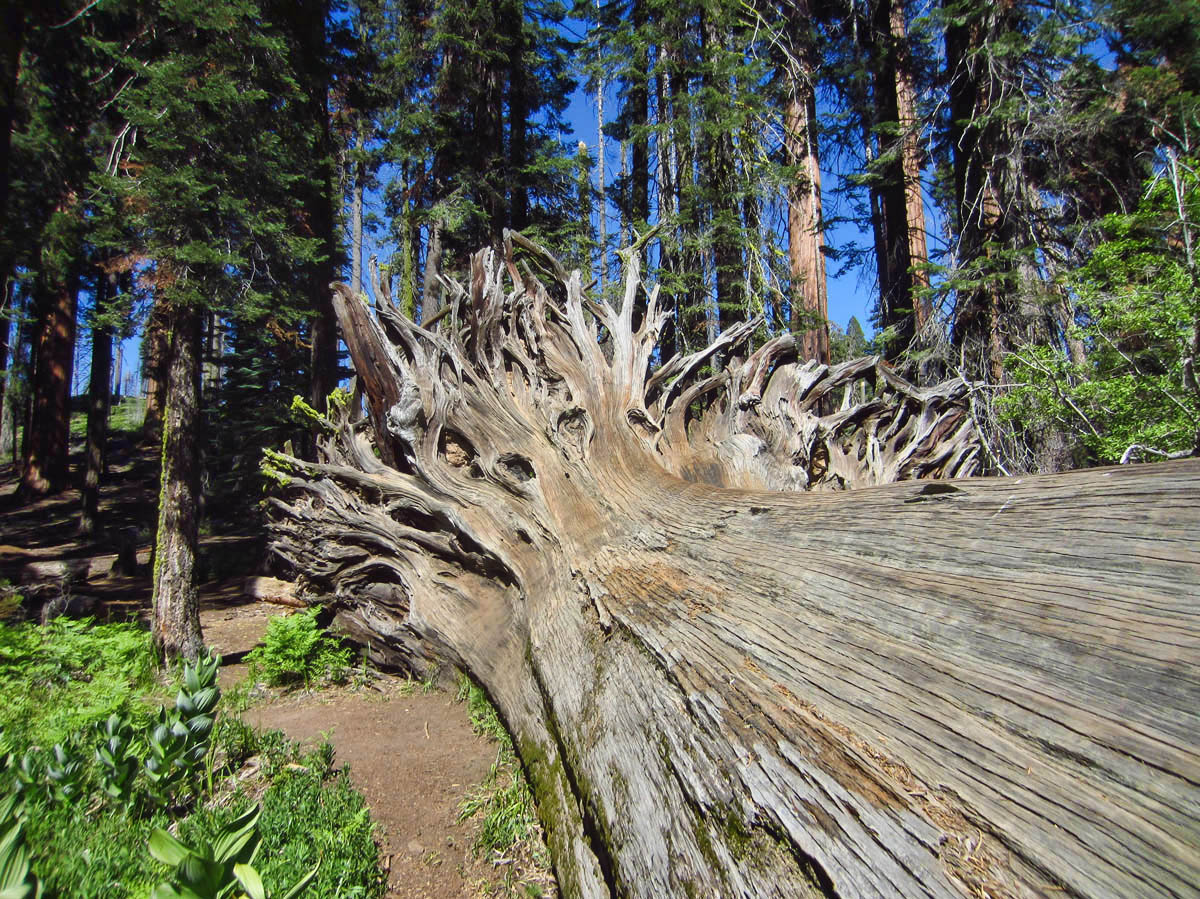 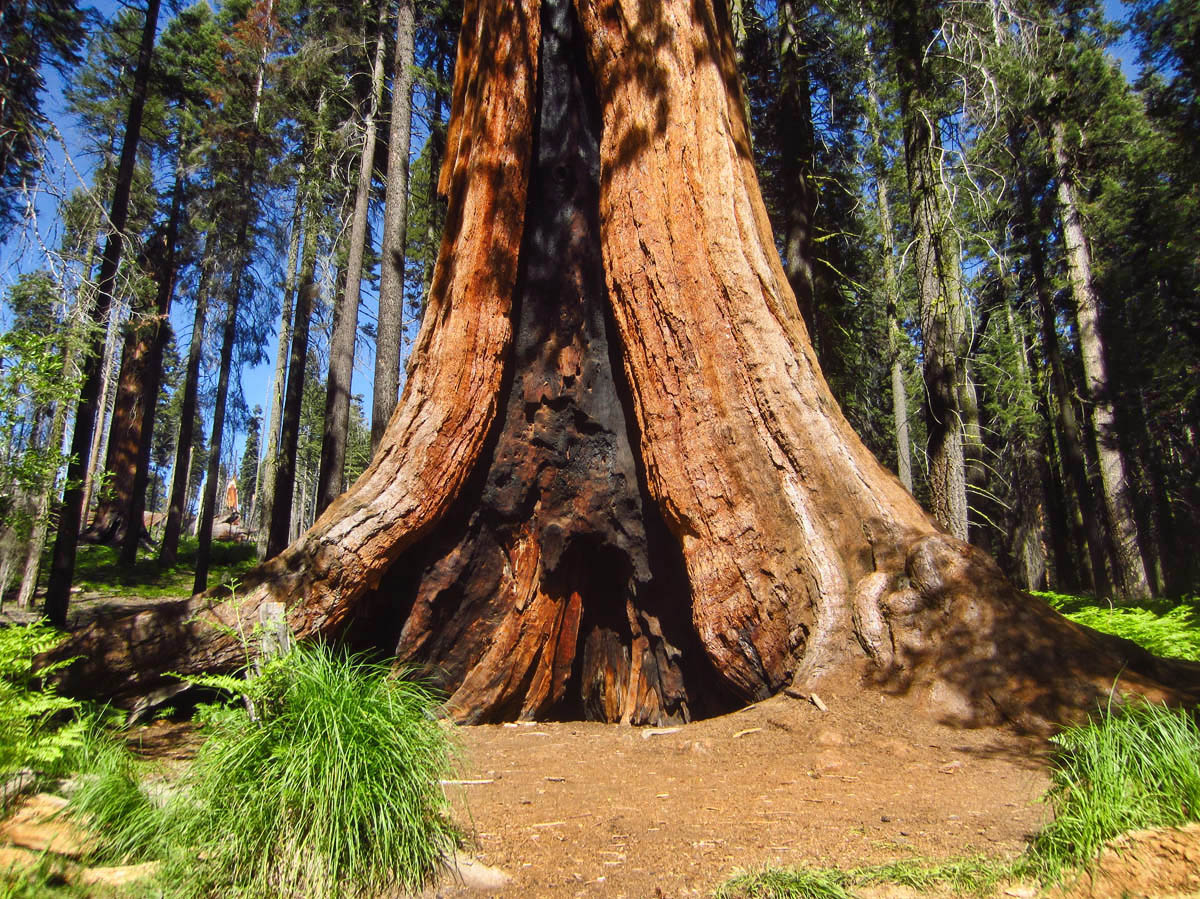 Even the burn scars on these old trees are beautiful.

I reach the Muir Grove just as the sun is getting low on the horizon. The golden light on the cinnamon colored trunks is radiant.  There are no fences here, so I am free to touch and tree-hug to my hearts content.  I have not seen anyone the entire hike, so I know I am alone in the forest.   I speak aloud to the trees and tell them how lucky they are to be far from the drive-by routes in the park.  How fortunate they are to grow free without fences around them, or information boards touting their weight and height rating how they qualify for one of the largest tourist attractions in the park.  I tell them John Muir would have been proud to have such a beautiful place named for him.   I tell them to stay strong.  Defy the odds.  Live for another two thousand years in spite of human intervention….  And then I hugged them.  First one, then another. True confessions of a tree hugger. 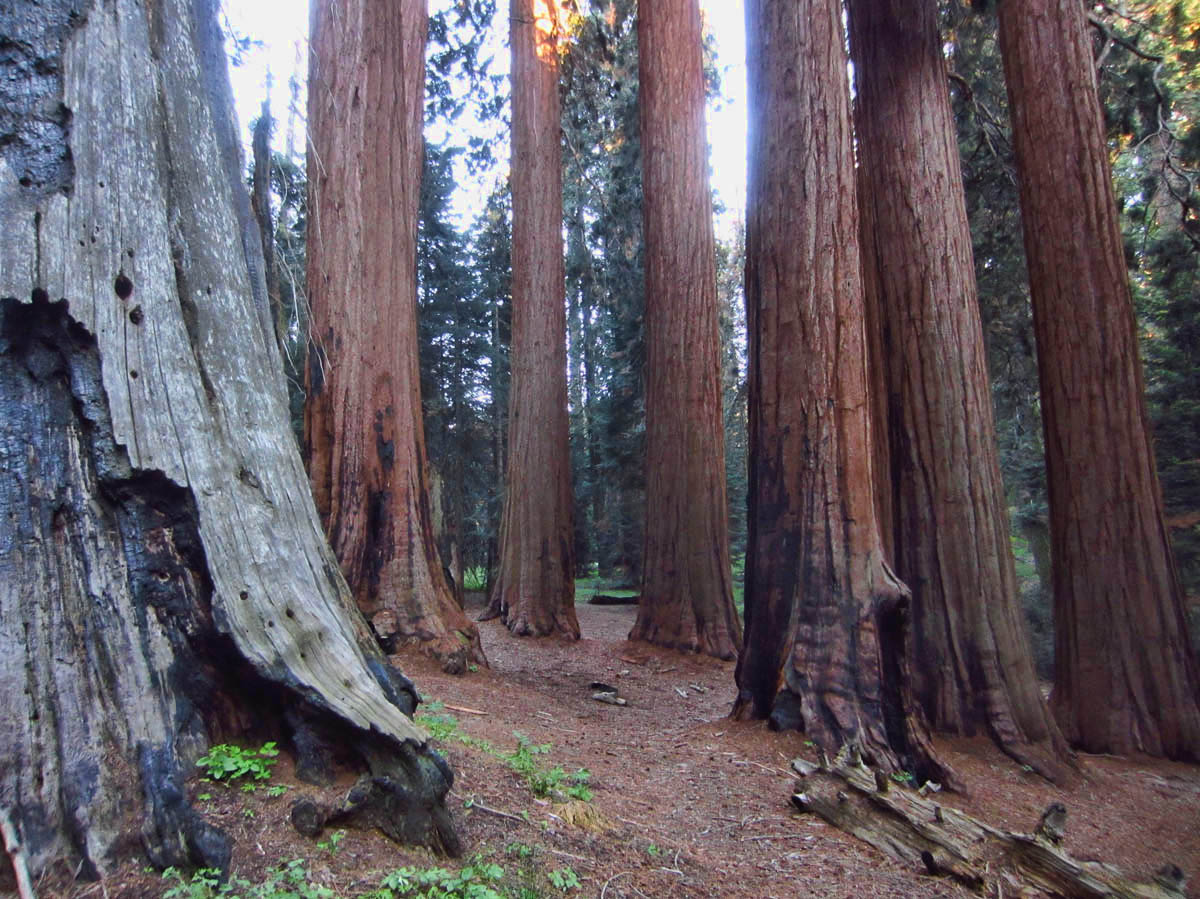 Beautiful Muir Grove. Remote. Quiet. Serene. There are over 600 sequoias in this grove, but the brochure says because of its remote location, the grove is rarely visited. 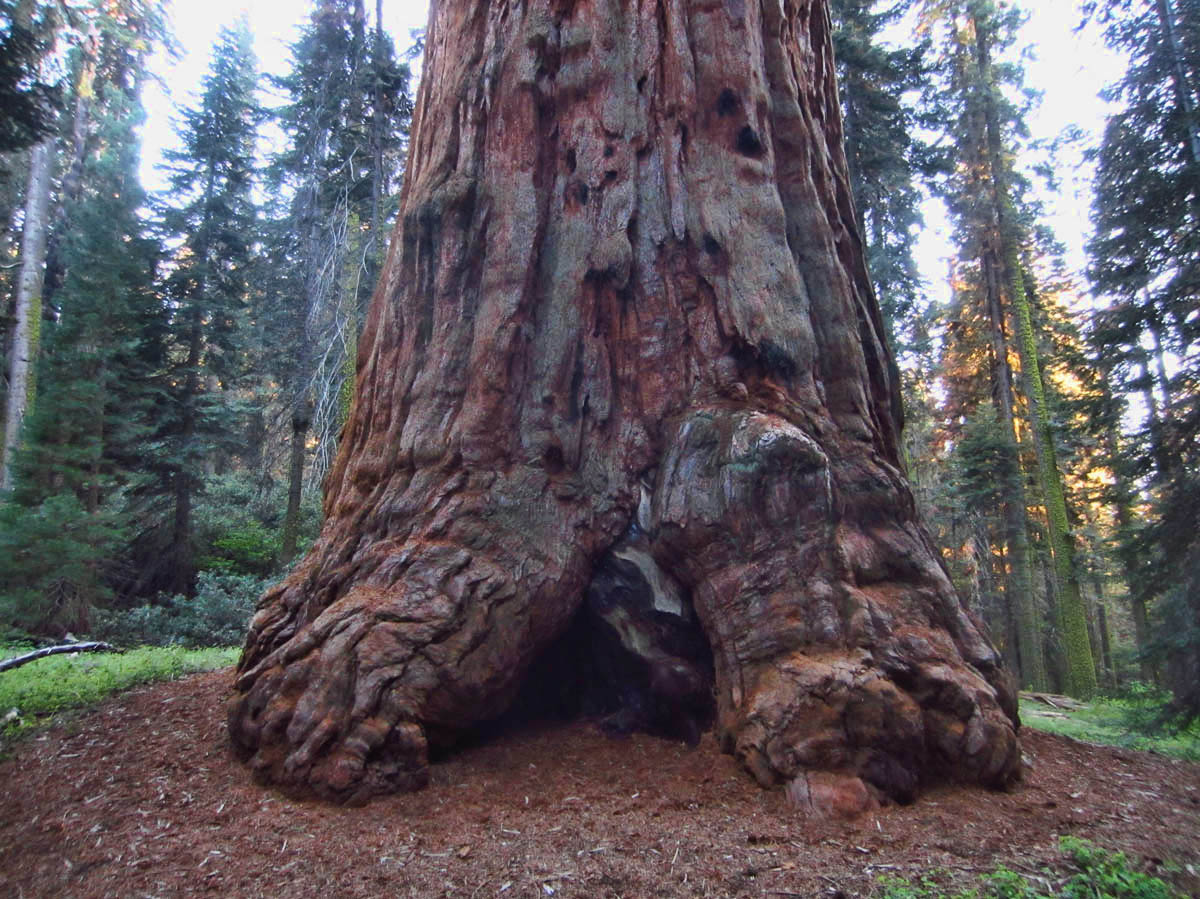 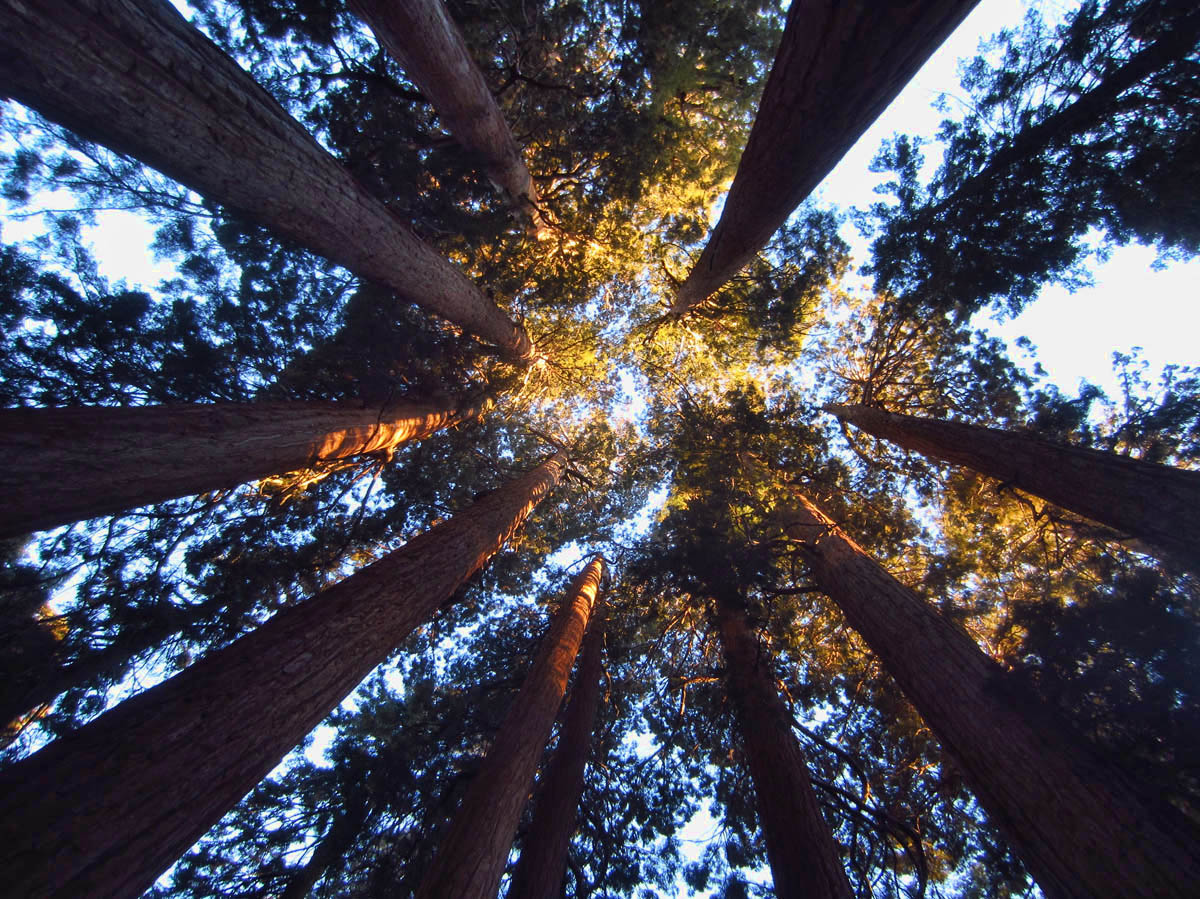 “A magnificent growth of giants…one naturally walked softly among them.  I wandered on, meeting nobler trees where all are noble…this part of the Sequoia belt seemed to me the finest, and then I named it ‘the Giant Forest.” ~ John Muir

11 thoughts on “Finding Solitude Amidst the Sequoias”