I was supposed to be in Portland for the 4th of July.  I’d had reservations at the Columbia River RV Park alongside Jim and Gayle since last April.   But all that was not without a hitch….a broken hitch, that is.  My 3 week delay while waiting on frame rail extensions derailed that plan.

But as every fulltimer knows when facing a major holiday, particularly one which butts up against a weekend, you’d better have a place nailed down to ride out the storm.  This last minute change of plans left me scrambling.  Having no idea how far up the coast I would be by the 4th of July, I just had to close my eyes, open Nina’s blog, and click one.  😉 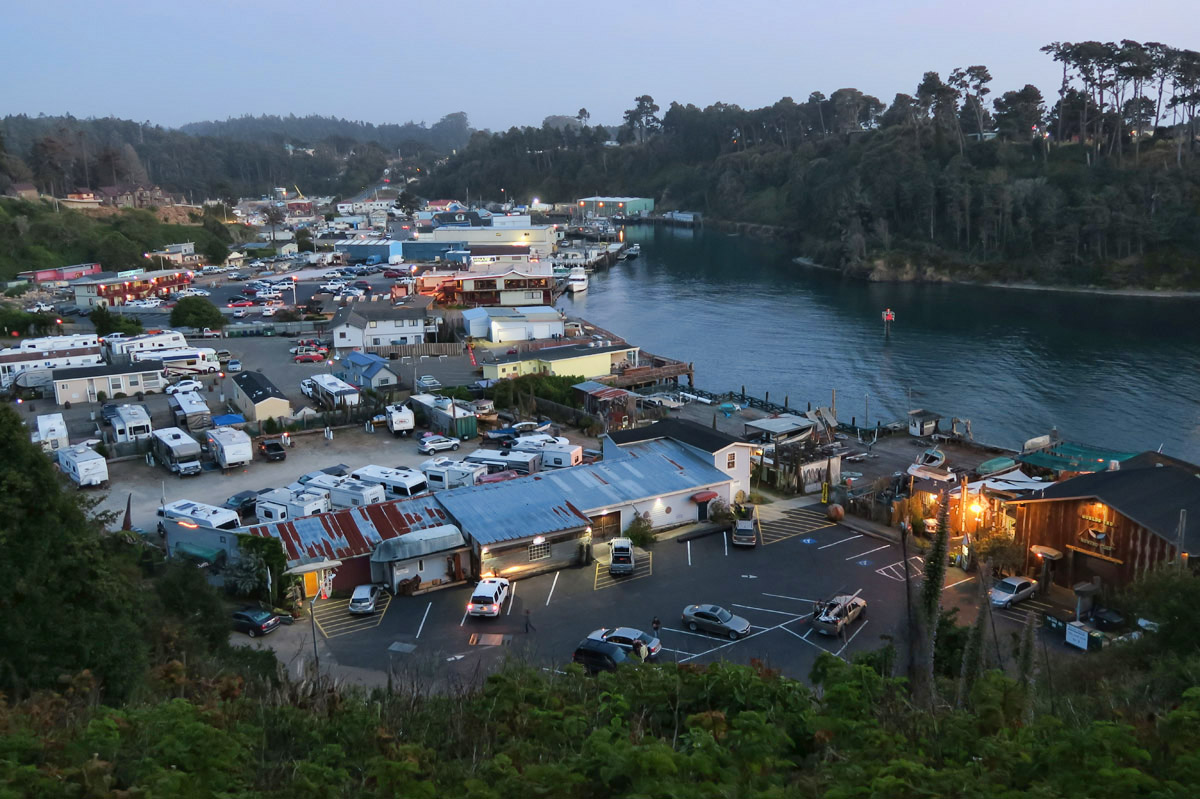 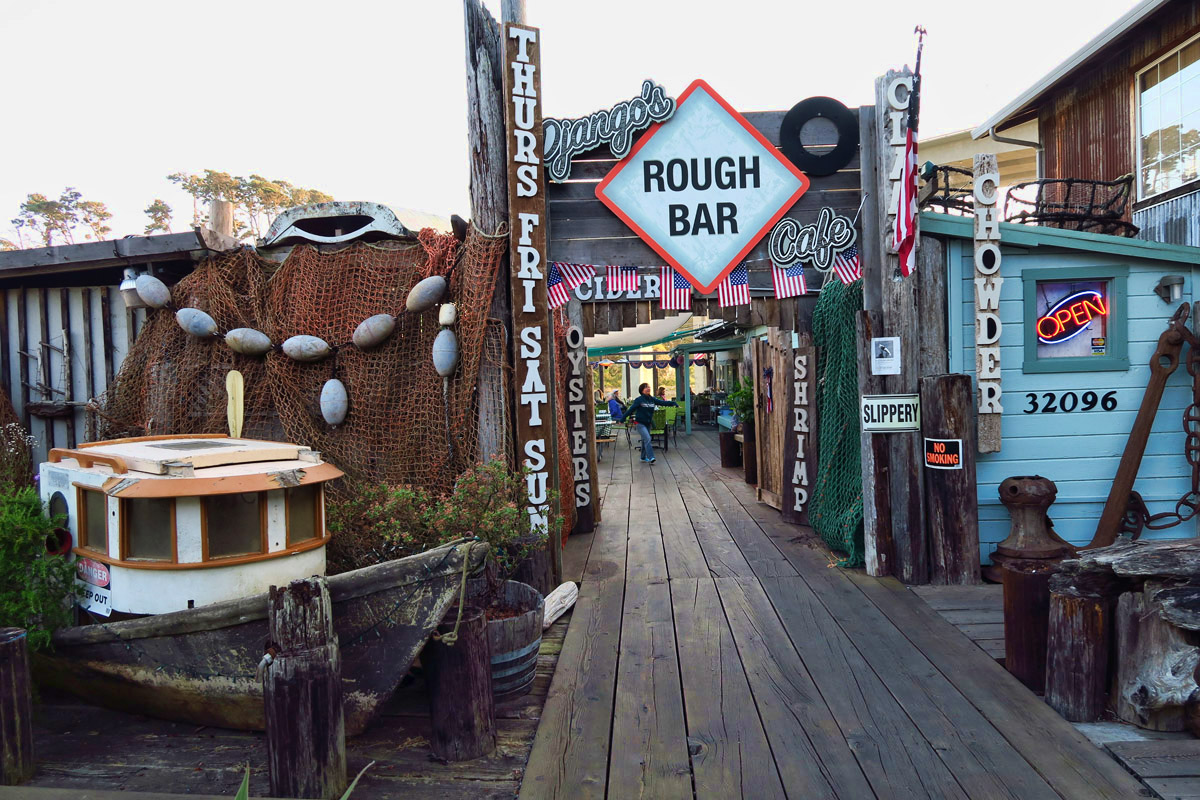 The Rough Bar next door is reason enough to stay there! 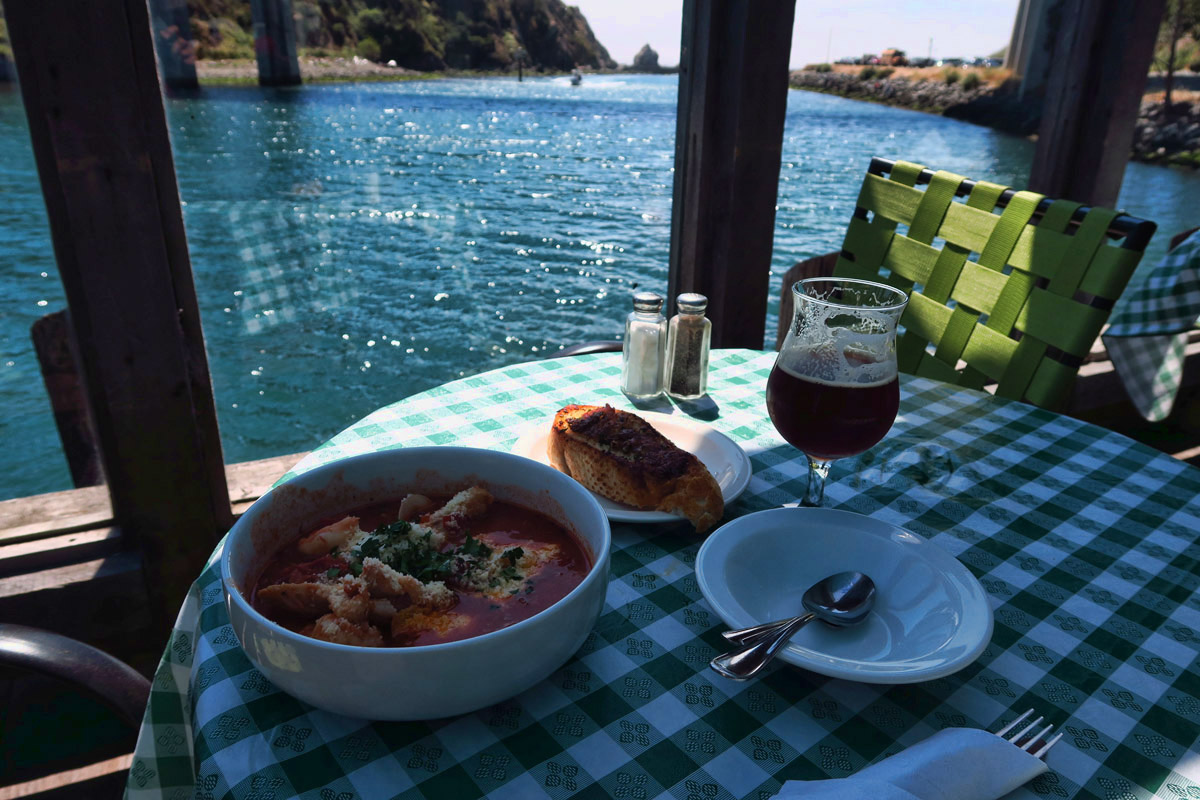 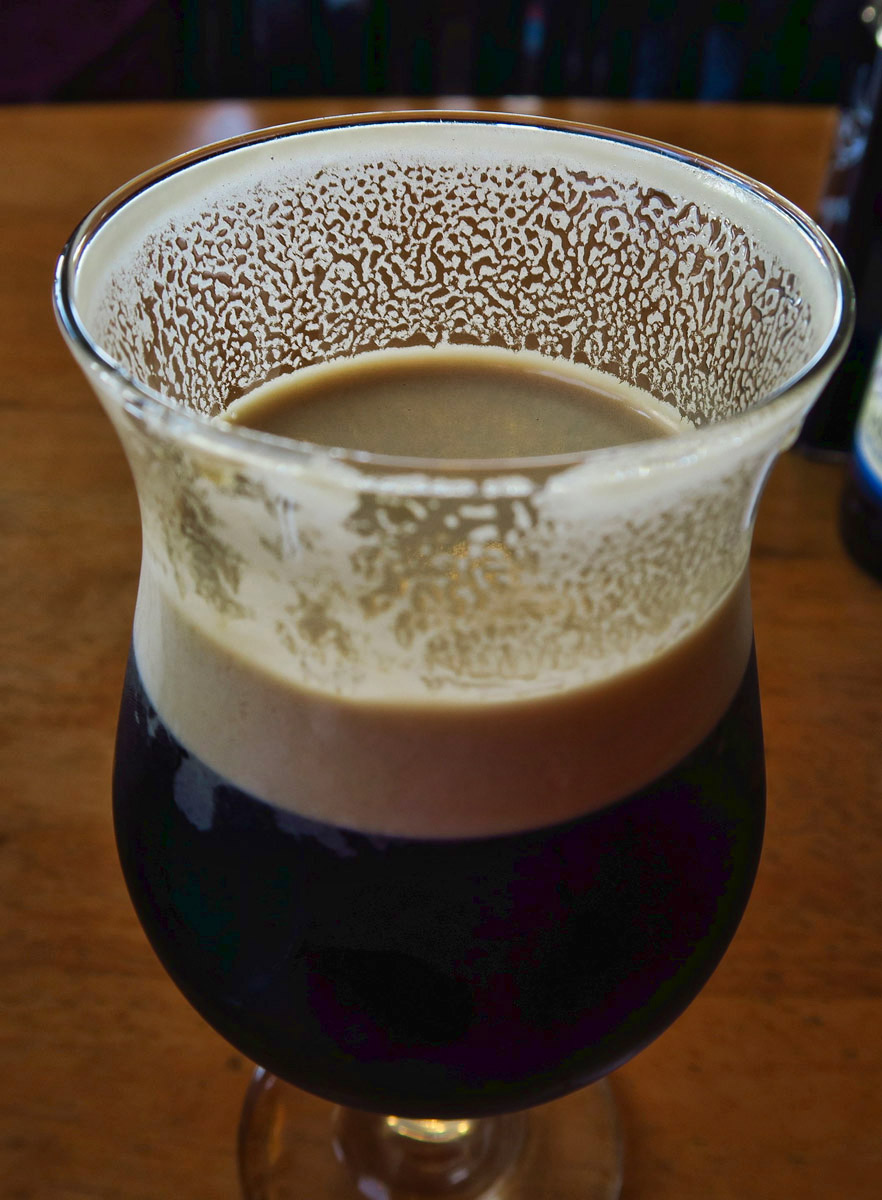 I am not sure if it’s the alcohol content of this beer, but I see artwork on the side of my glass…

Last April while I was making my Fourth of July reservations for Portland, Nina was writing tales of a beautifully restored lighthouse, barrel-aged stout, and blooming rhodies in the botanical garden near Fort Bragg, along California’s northern coast. At the time, I made a note in my spreadsheet to stop there on my northerly migration.

I had reservations for early June, but I had to cancel due to the repair delay.   Mike, the Office Manager said when I called, “No problem.  Come any time.  We always have space.  Exept the 4th of July weekend, of course.”  So when I called again three weeks later to ask for a spot over the 4th, I was braced for laughter.  Instead, what I heard on the other end of the phone was “You’re in luck!  We just had a cancellation.”  Ironically, someone who had repair problems… 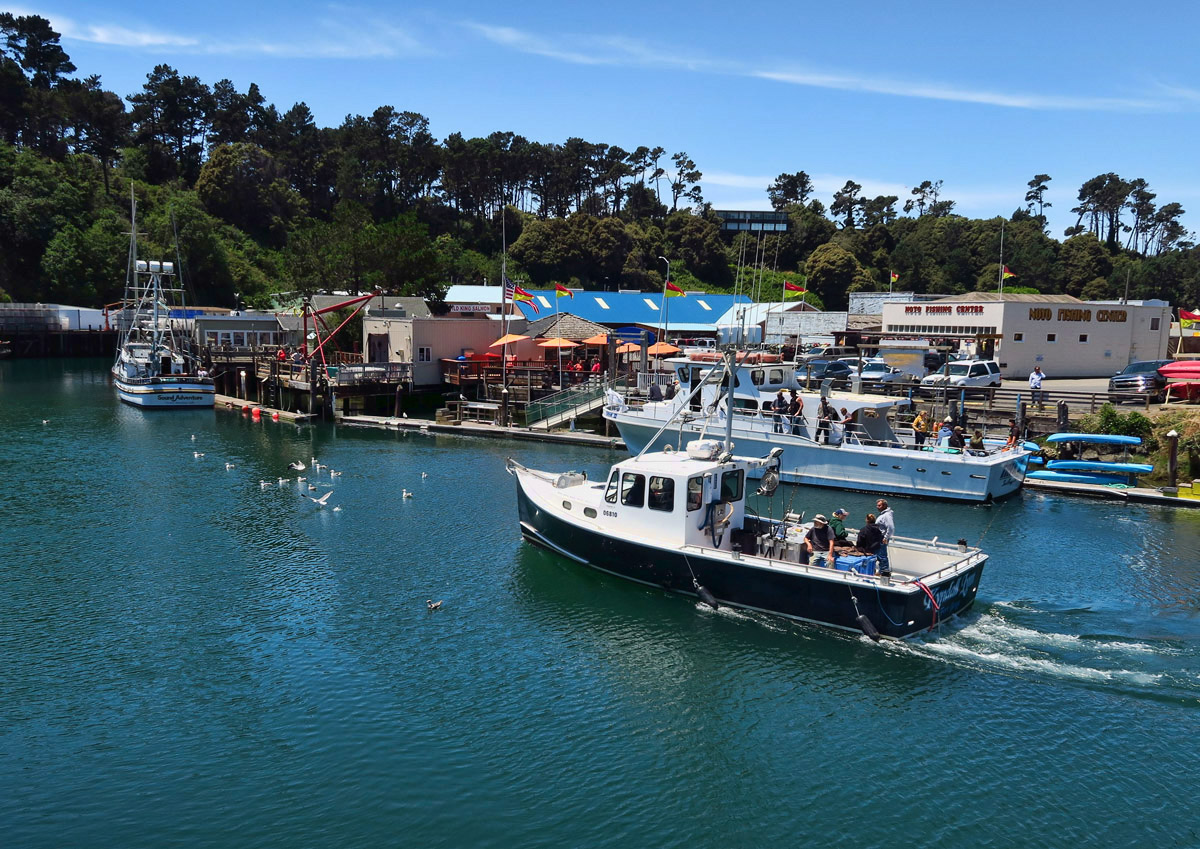 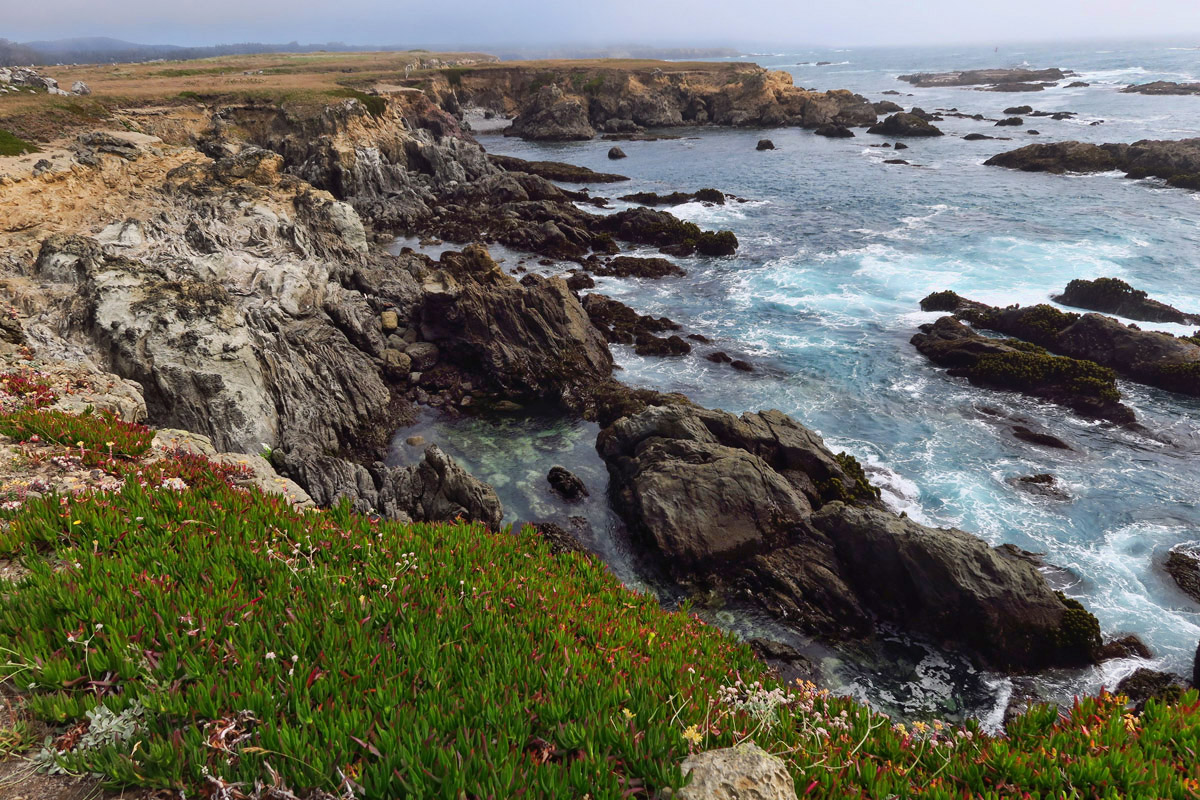 Beautiful headlands trails lead right from the park! (Well, after you climb the big hill that is.) 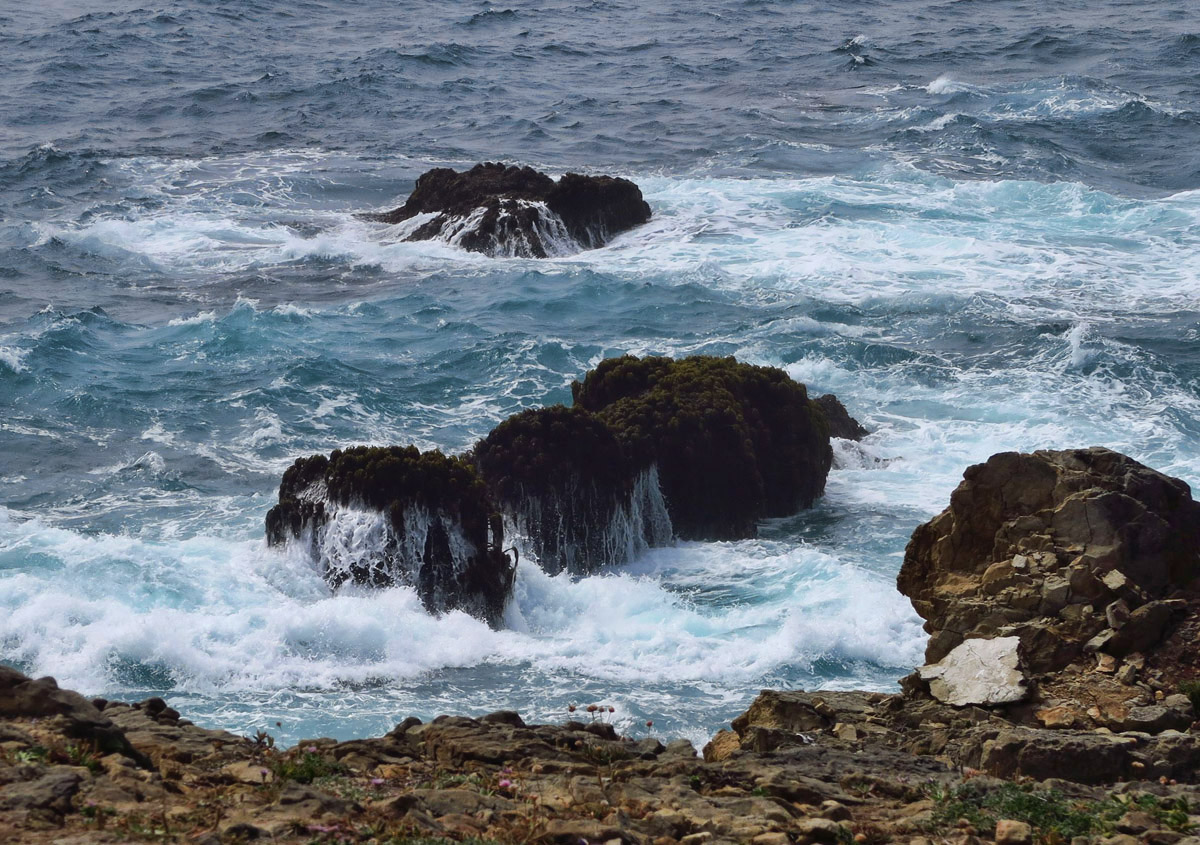 Warning, the North and South Headlands Trails do not yet connect. They are both dead end trails where you must backtrack.

My first impression upon arrival at the Sportsman’s RV Park is how friendly everyone is there!   I haven’t even gotten level yet when I am schooled on the best place to buy tickets for the Salmon BBQ, and three recommended viewing points for the fireworks show.   Perhaps they are so friendly because they are aware of the trauma the traveler has just endured to get there! 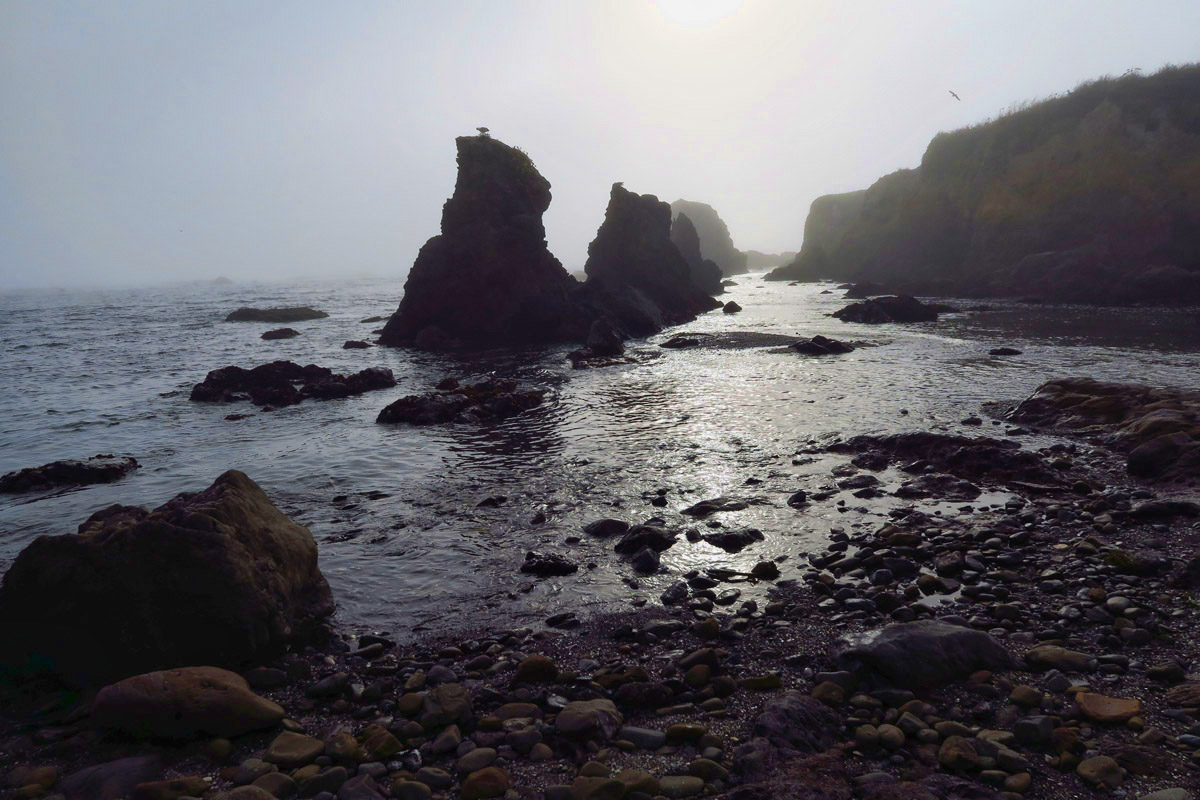 A foggy day at Glass Beach 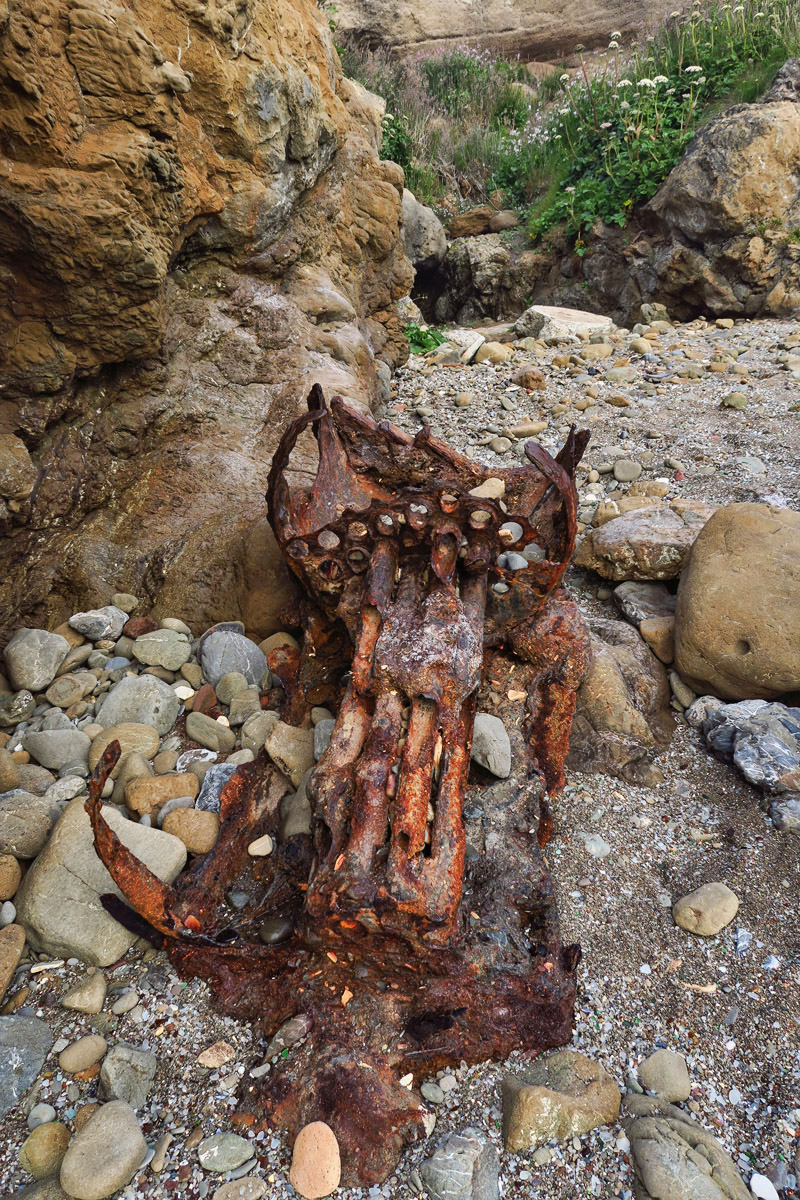 Prior to 1967, this beach was the town’s garbage dump. 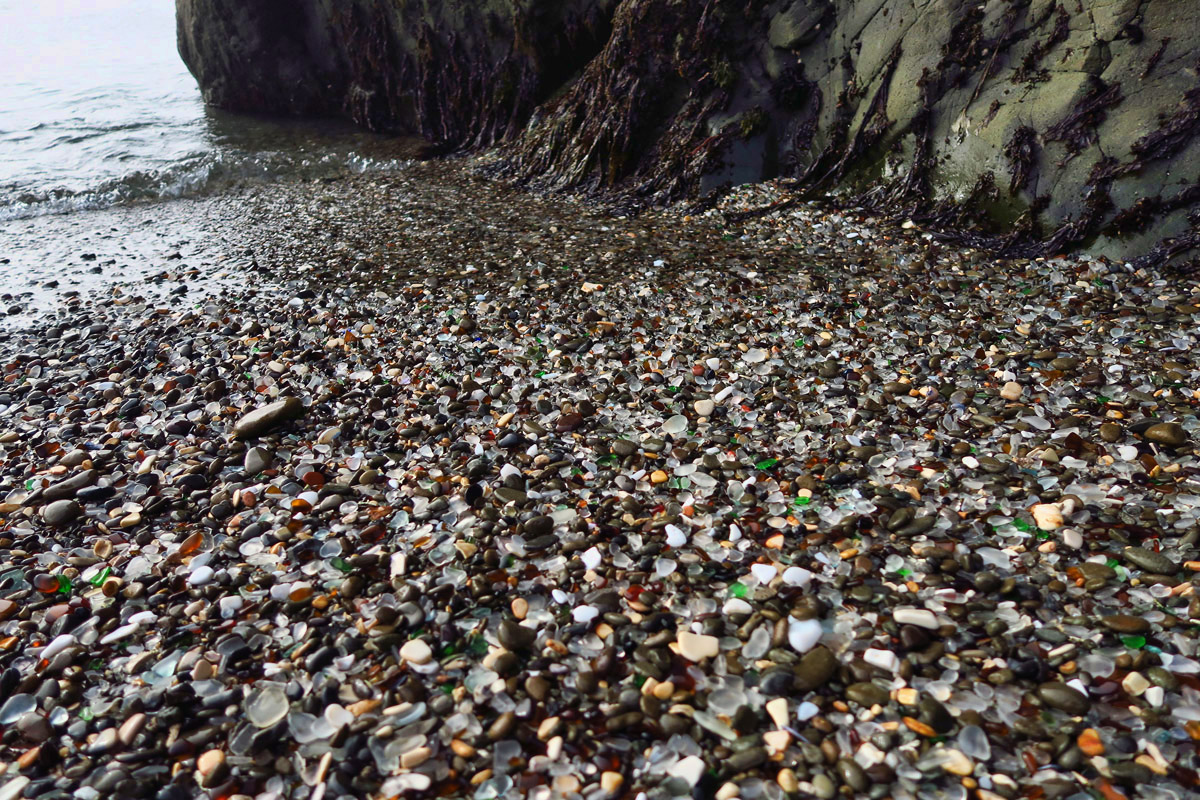 All dumping was stopped in 1967, but now Mother Nature has turned trash into treasure…

There is NO easy way to get to Fort Bragg.   Both stretches of Highway 1 from the north and south are twisting, winding, hilly, or pass through the redwood forest with barely room to ease between the trees.  So it’s a toss-up.   My desire on this trip up the coast has been to spend as much time on Highway 1 as possible.  But it’s 140 miles from Point Reyes, with no guarantee of a diesel fuel source.   There is one station in Point Reyes, but their diesel pump is temporarily out of order, which is enough to convince me to cut up through Petaluma to Highway 101.   Then I will angle back to the coast along Highway 128, which goes through the tall redwoods.  But the challenge with this road is that it’s too dark in the forest to spot the suitable turn-outs.  I can’t decide if I am more comforted or troubled meeting those giant logging trucks through those narrow passageways threading between the redwoods…not enough room to meet, but lulled into the false sense that the loggers would feel no remorse over taking out a few more trees along the road rather than my Winnie! 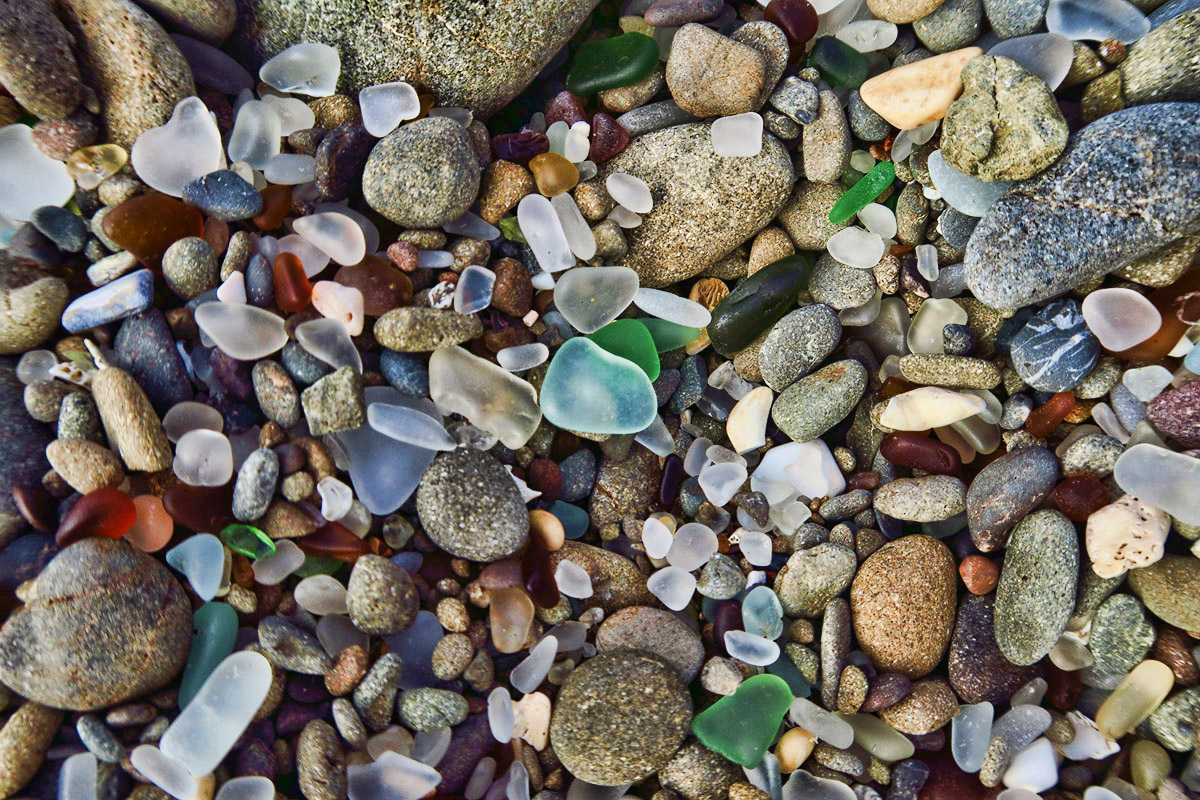 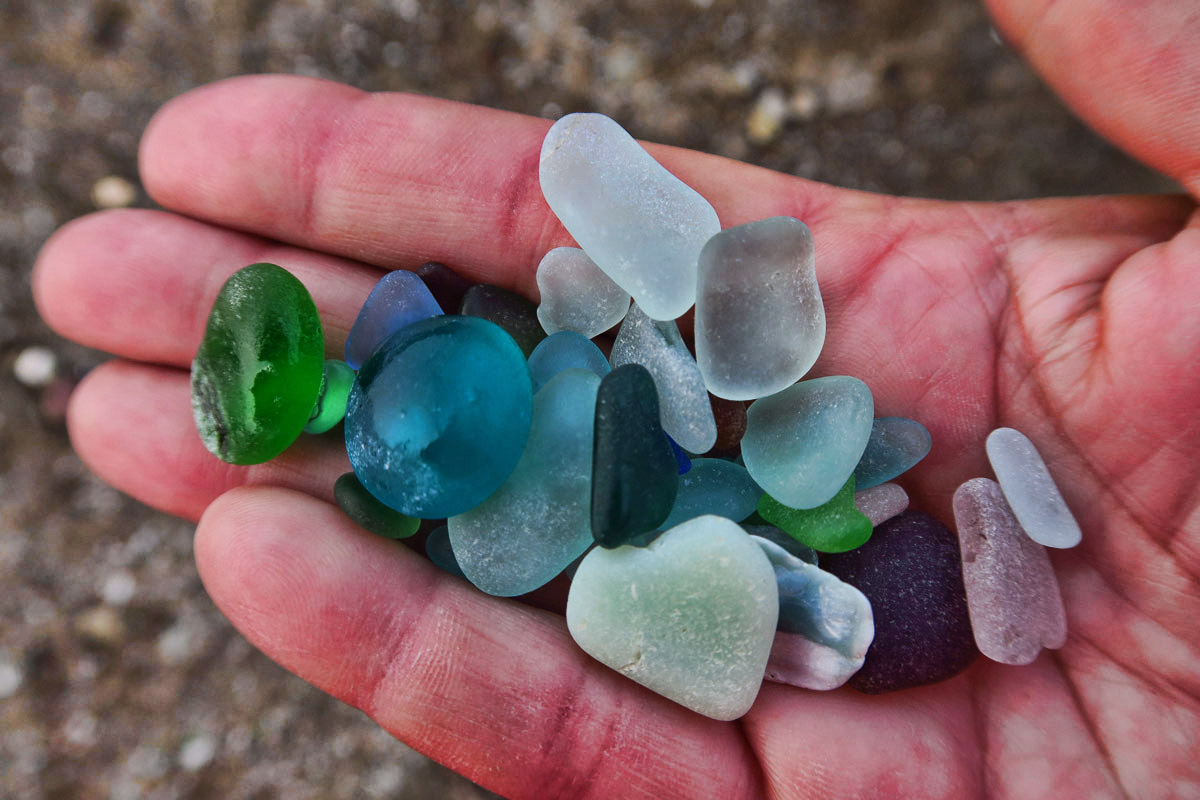 I would love to know the original source of glass for all these unique colors. 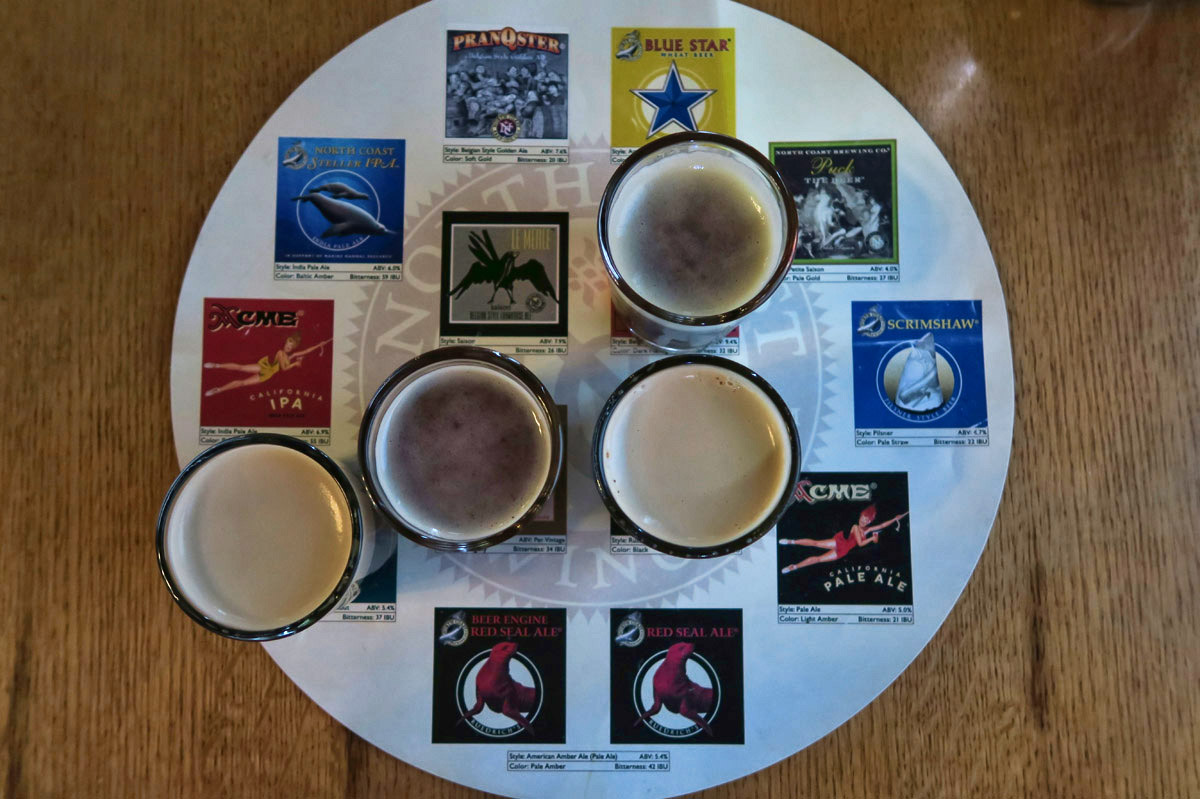 A flight from North Coast Brewery makes for a good stop after beachcombing. I like their “place-mat” where corresponding tastes are placed over the brew’s logo and description. That way, I can see what I missed. 😉

This challenge in accessibility certainly gives greater insight into the local culture of Fort Bragg.   It’s easy to see that they are a close-knit community, if for no other reason than necessity.  I can imagine having to drive an hour along a harrowing road to reach the next largest town could make one more dependent on their neighbors.  😉 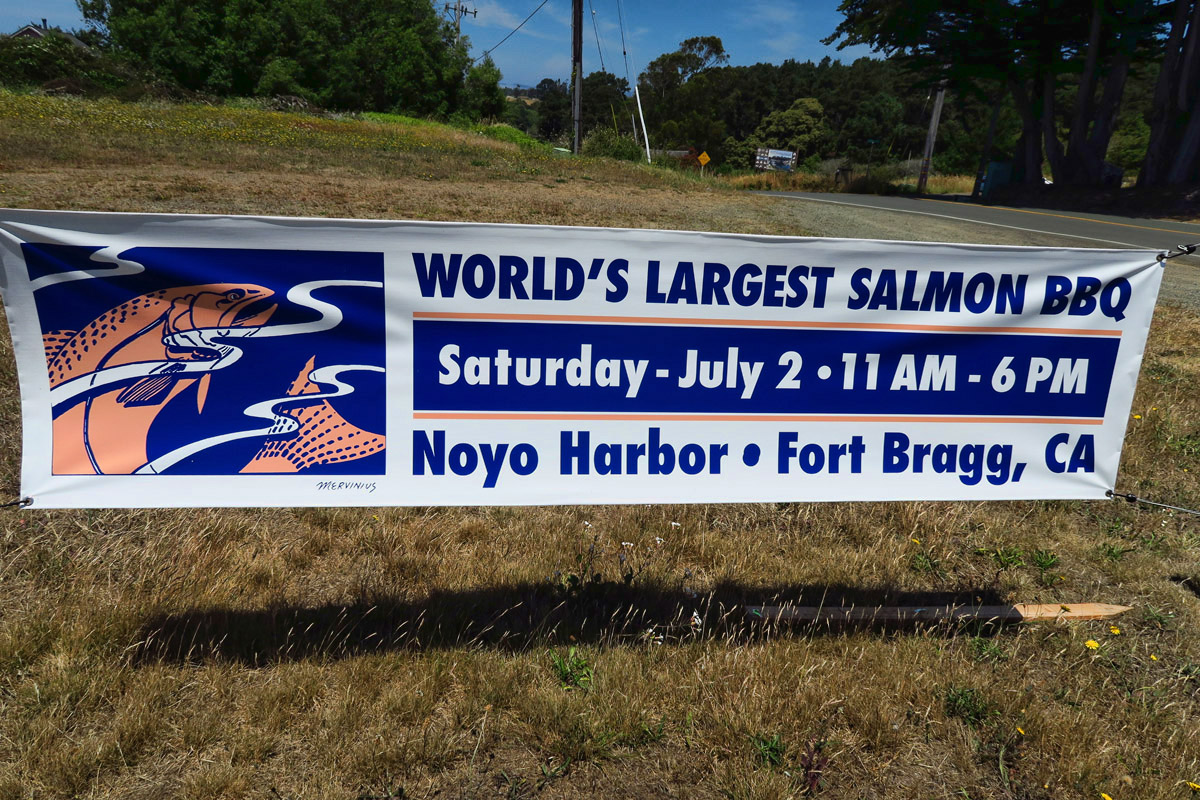 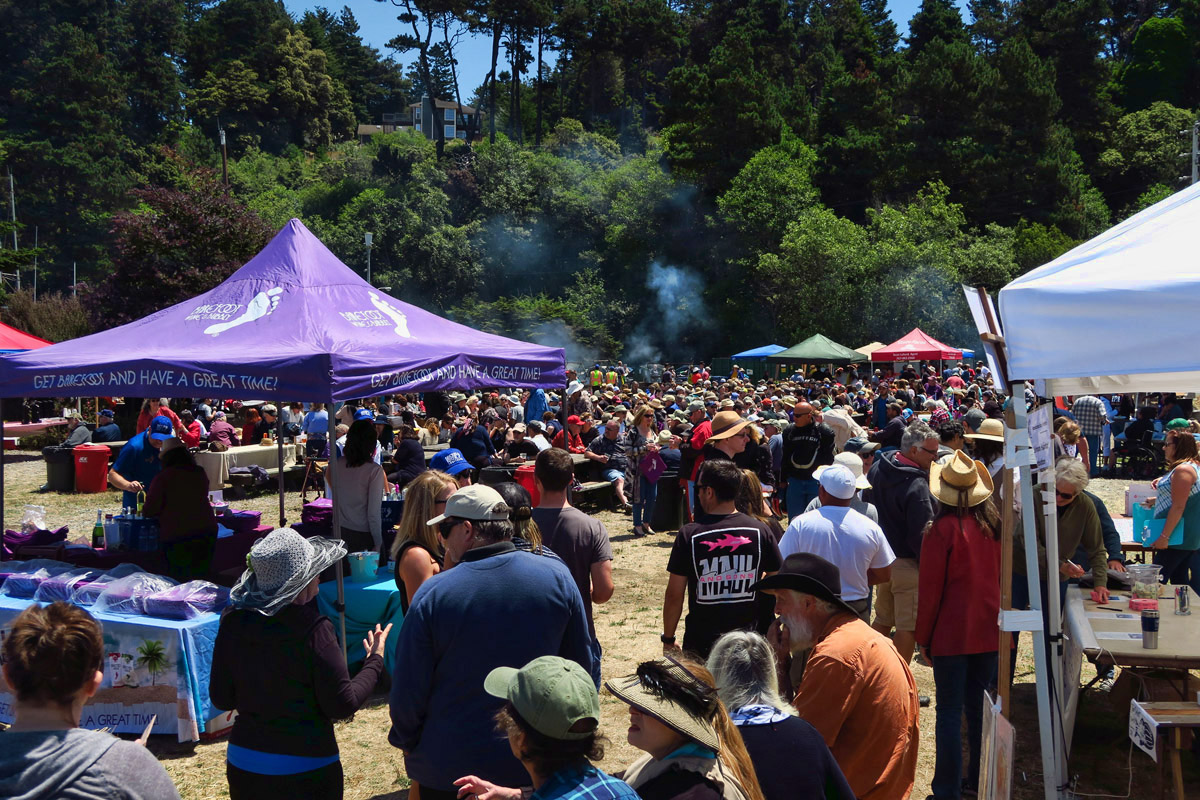 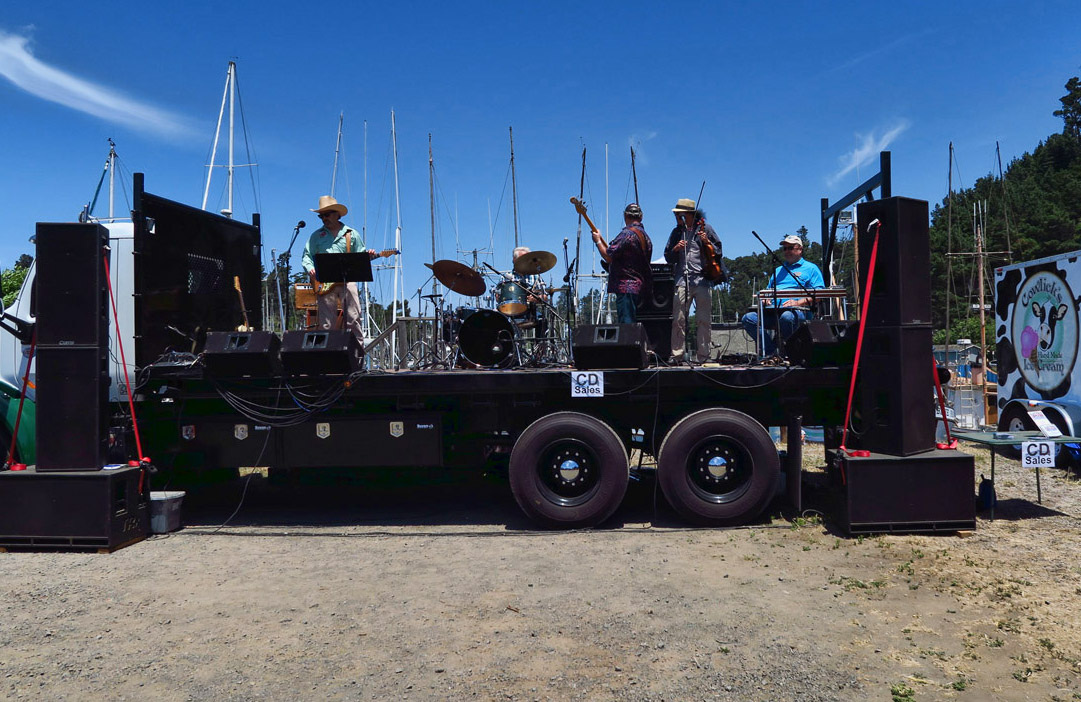 As does the lively music.

I didn’t come with the knowledge that I would be arriving just in time for….”The World’s Largest Salmon BBQ,” but who could resist?  The price is a bit steep ($25 in advance or online, $30 at the gate) but once I learn all proceeds go to support the Salmon Restoration Association, it didn’t seem so bad.  Taken from their website, “The Salmon Restoration Association exists for one reason…to take positive, measurable action to restore the natural wild salmon runs to rivers of Northern California. Our primary concern at this time is the renovation of local streams to their natural health condition.”  A worthy cause, indeed. 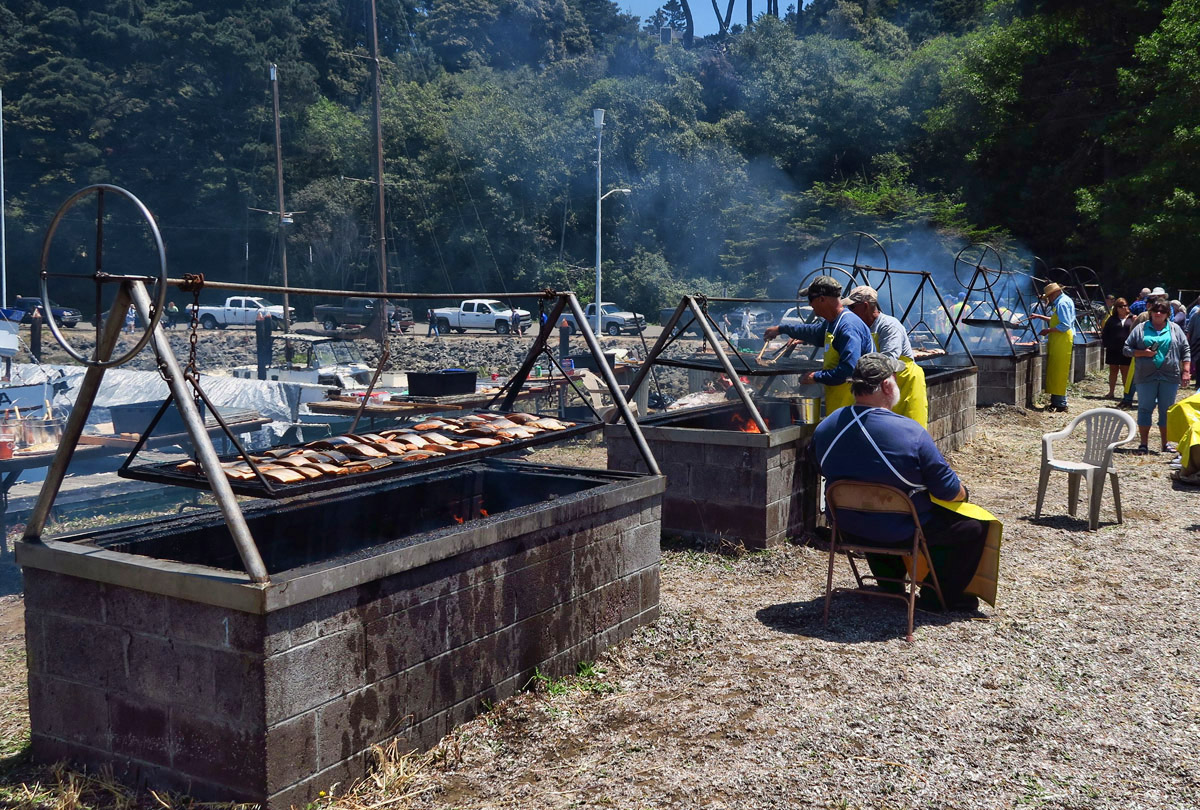 Salmon is being grilled all along the waterfront at the “World’s Largest Salmon BBQ.” 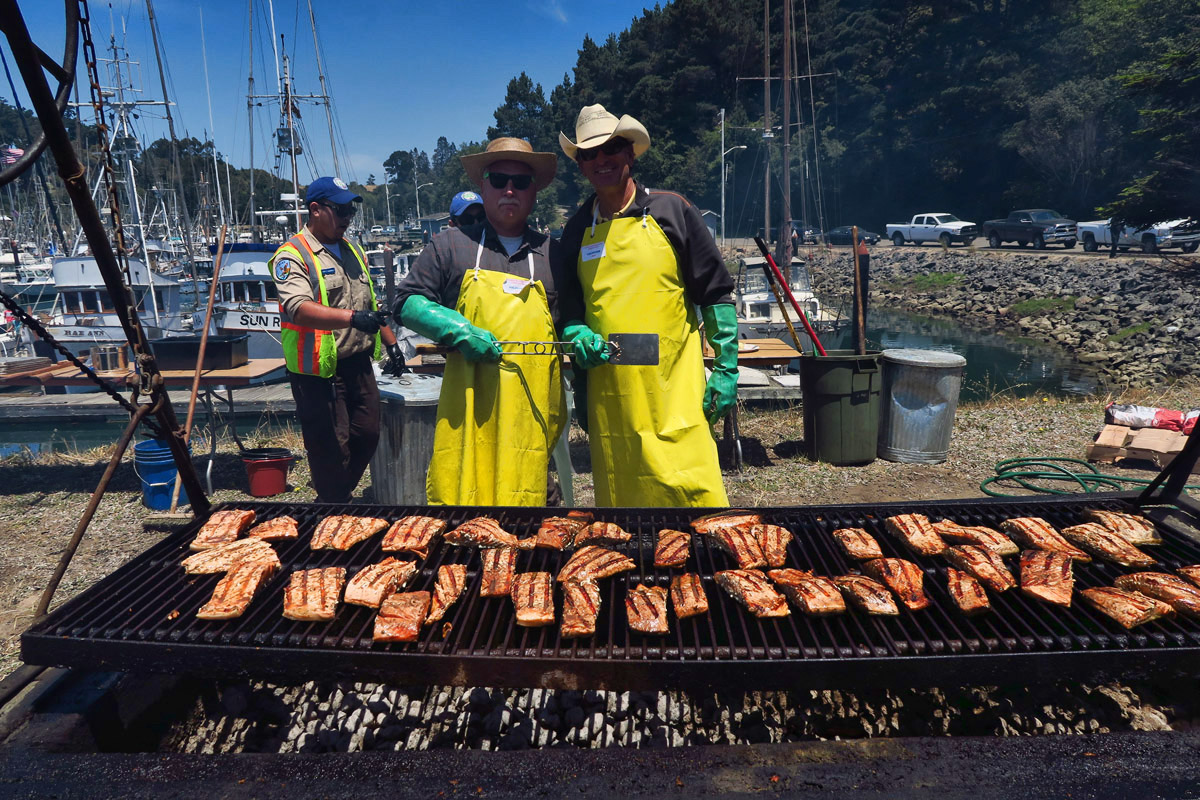 This is Tom. He has his own personalized salmon flipper. 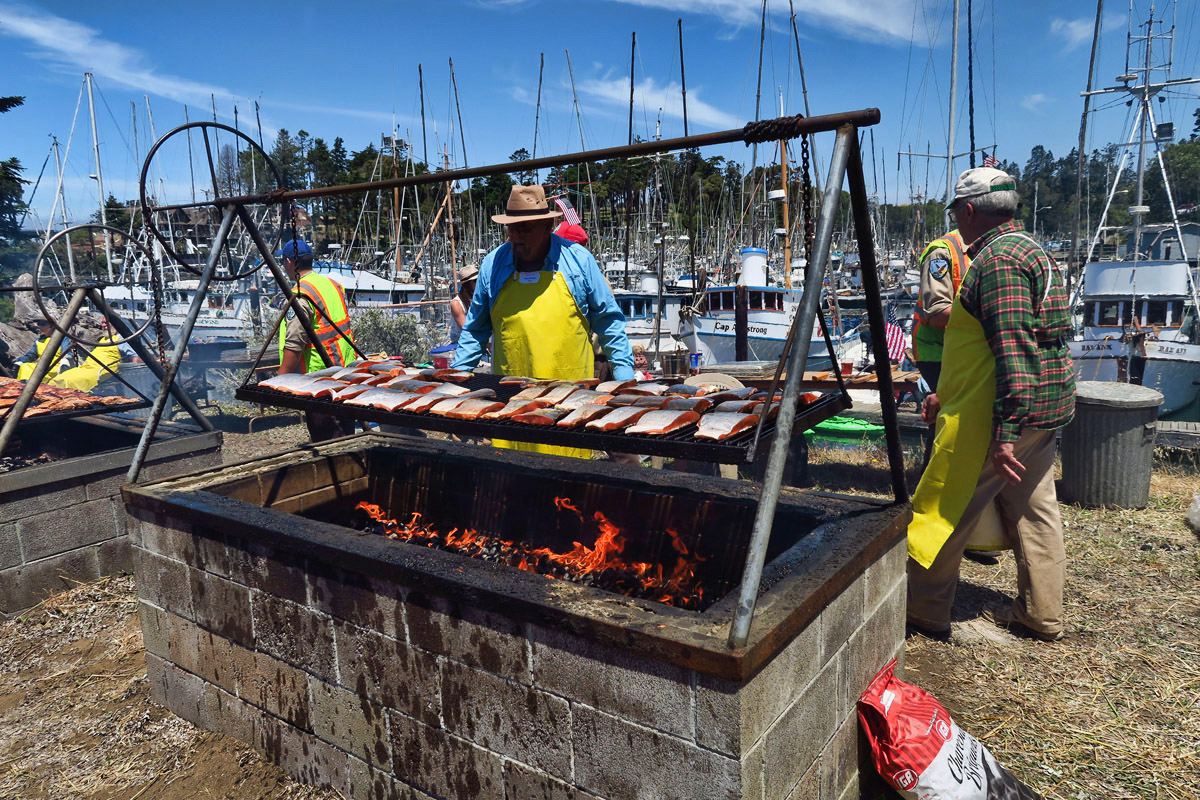 I can’t describe the aroma coming from these fire pits!

This giant “salmon feed” is about the most organized, congenial event I have attended, especially where food is concerned.  People politely wait their turn, share tables, and make me feel like a local.   The “assembly line” for serving is staffed with all volunteers, who do a remarkable job at serving quality food to a crowd of this size. 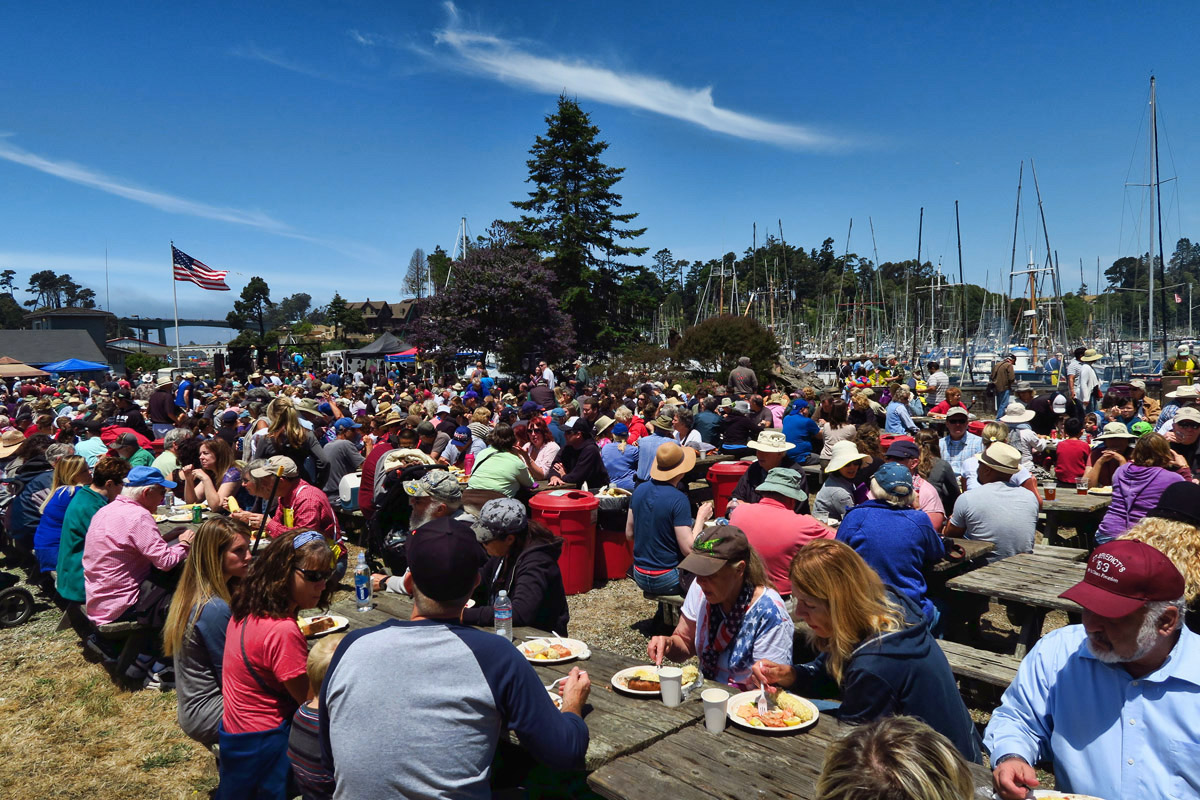 Such an orderly, polite group. 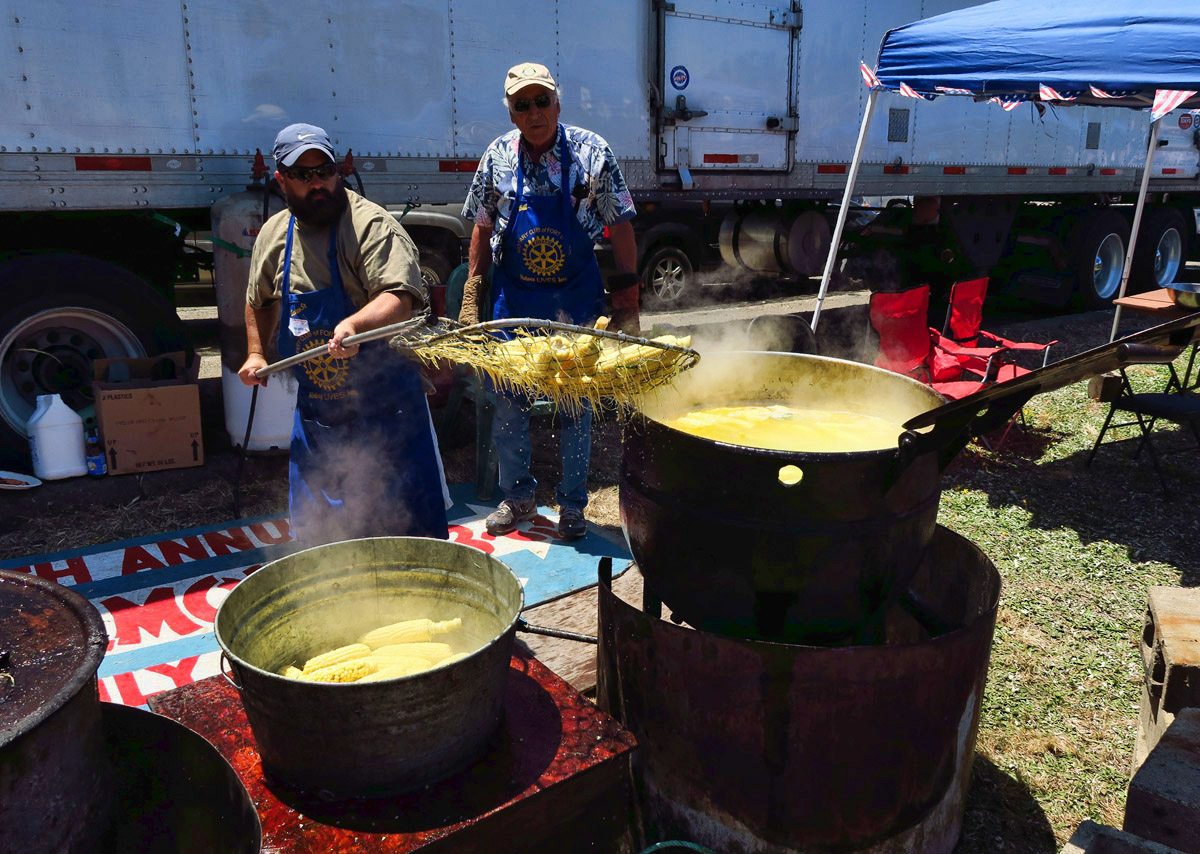 They say the secret to the sweet corn is butter in the water. 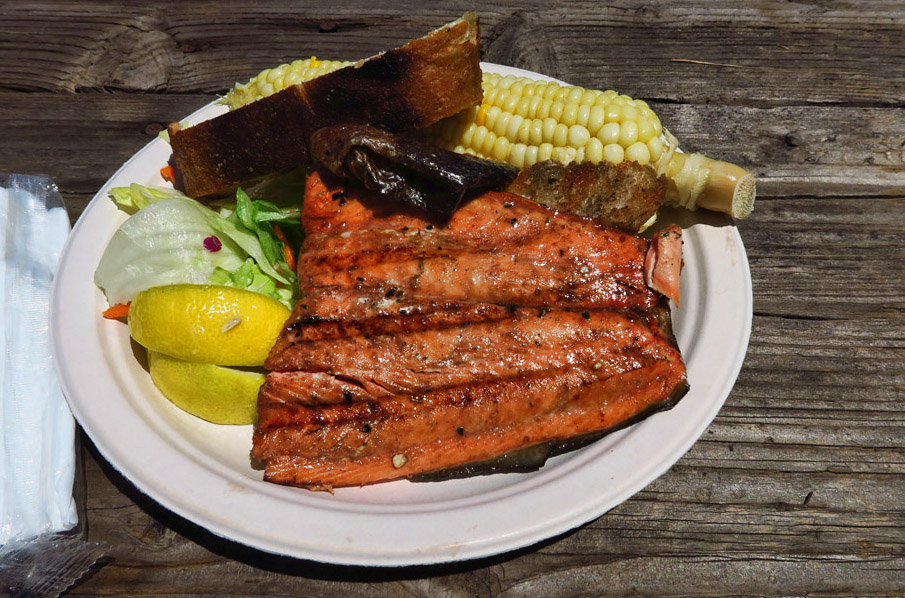 The Salmon BBQ always takes place on the first Saturday of July, so the town puts on their fireworks show on the same day. Mike in the office tells me we “should” be able to see the show from the Happy Hour deck on the RV Park property, as long as the fog doesn’t obscure the view.  But I decide not to risk it, and instead choose to watch the show from the Highway 1 bridge overhead.  I figure it’s not often that I get the chance to watch fireworks from a bridge, so I should make the trek up the hill.  As with the salmon BBQ, this has the potential to be a mob scene.   But instead, the crowd is polite, lining up along the bridge single-file in orderly fashion, careful not to block anyone’s view.  Or knock anyone off.  😉 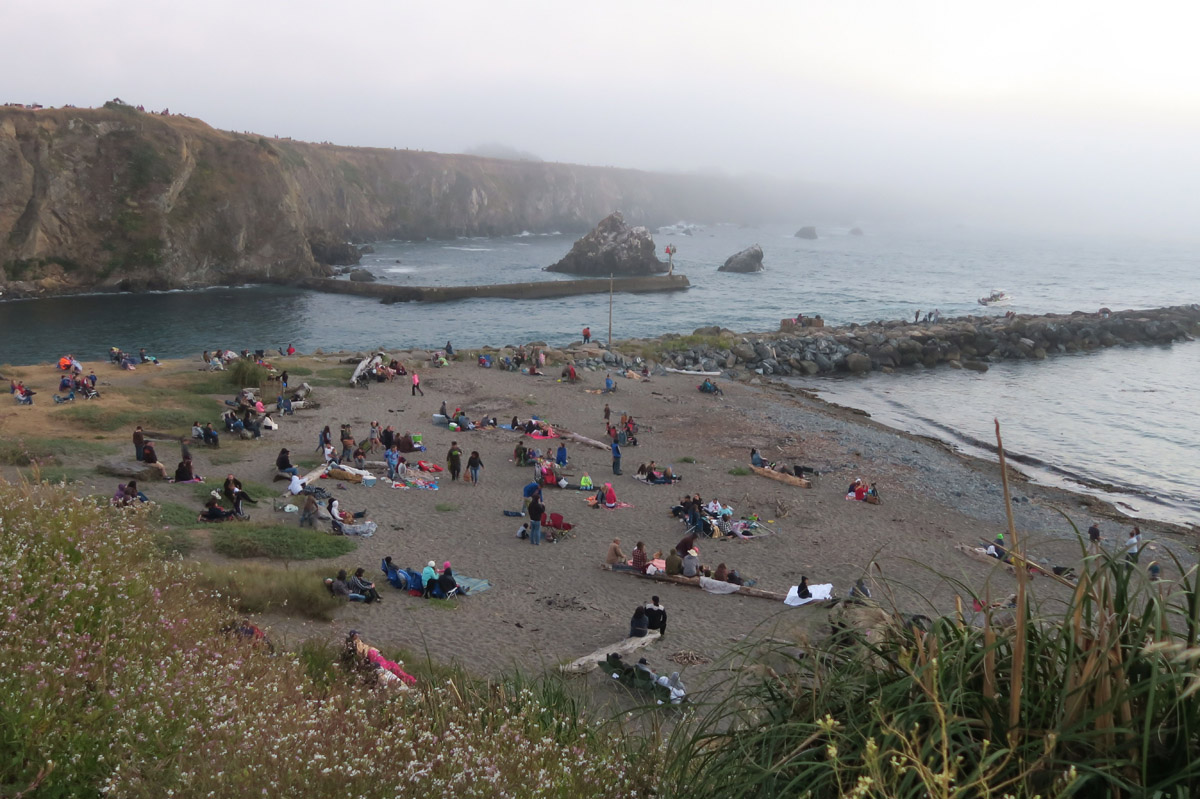 “Crowd” assembles on the beach for fireworks, one of the recommended viewing locations. 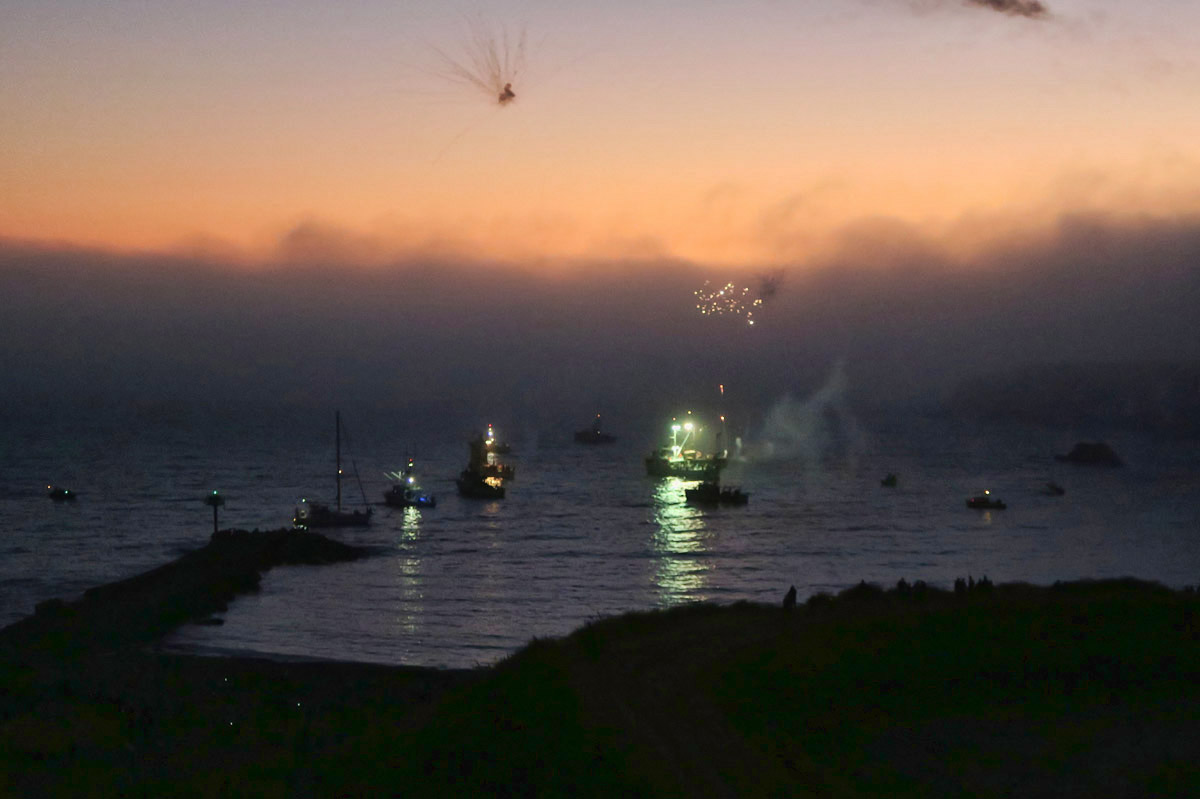 I opt to watch the show from the bridge along Highway 1. 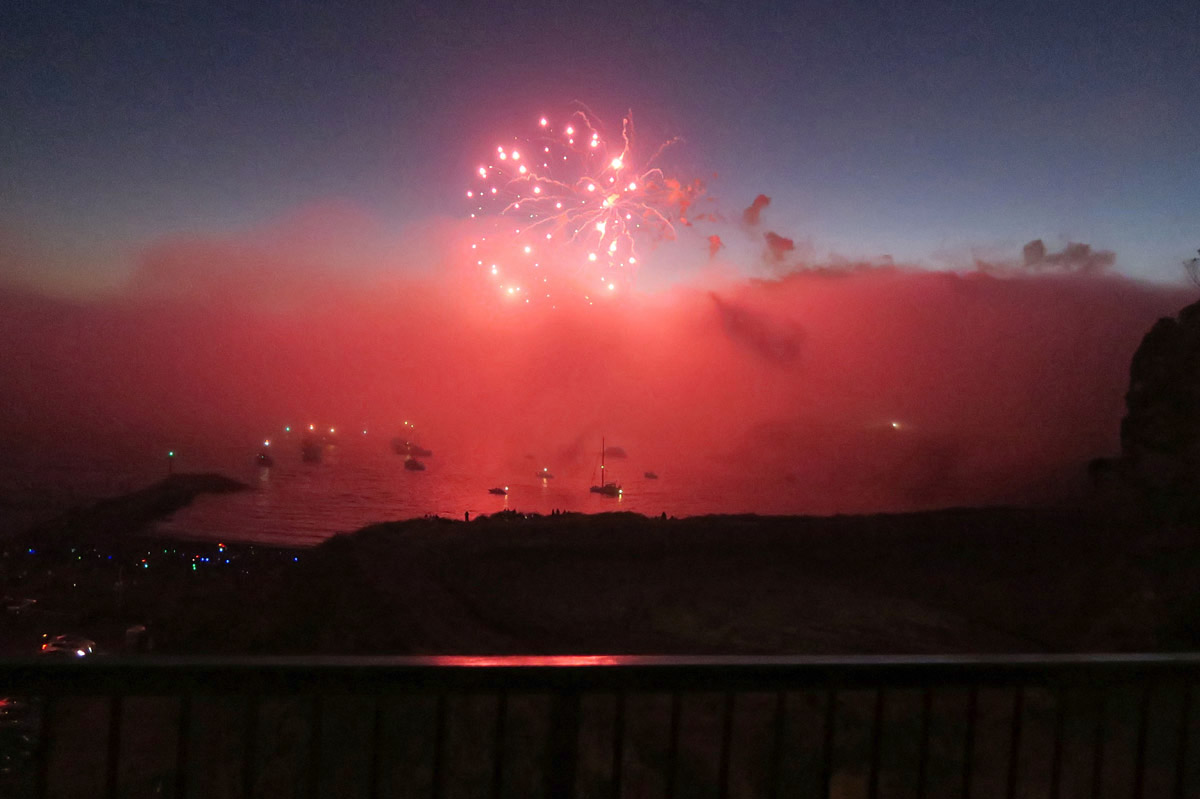 Note boats in the harbor. Some are also shooting fireworks. 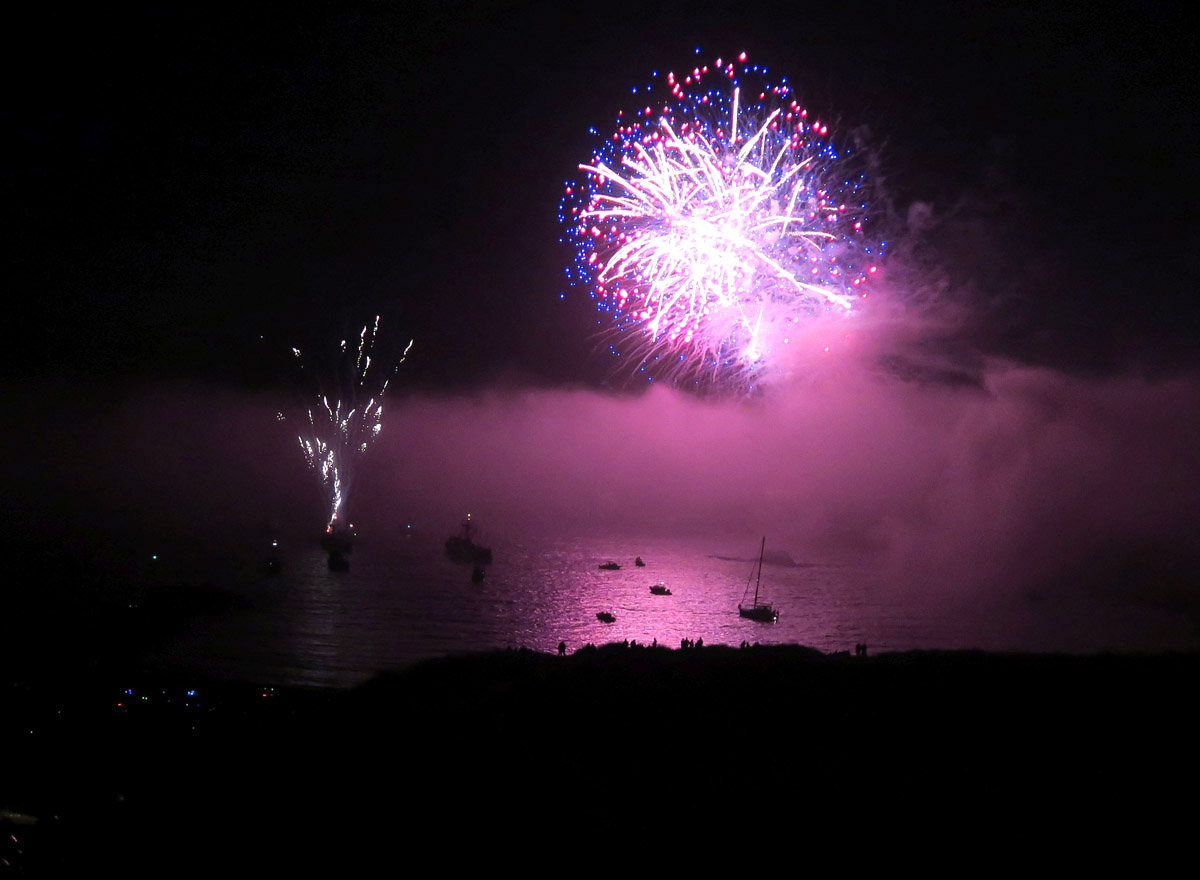 They put on a great show, particularly for a town the size of Fort Bragg.  The fog lent a “special effect” in that it intensified the color of the fireworks as they exploded in the sky.   It ended up being one of my top best memories of this holiday yet.  I just never expected the Fourth of July to be the event when I finally took the tags off that puffy down coat I bought on sale last winter!

16 thoughts on “Festivities and Fog in Friendly Fort Bragg”