So what if the mountains are calling but you can’t see them?  Would you still go?

That’s the question I asked myself sitting in the dry camping spot, 50 miles down a lone road from the Johnston Ridge Observatory overlooking the socked-in gray wall of clouds that lie between me and Mt St Helens.   “If I can’t see the volcano, is it worth the 100 mile drive?”

I had big plans for this summer, not the least of which was a permit to climb the volcano on the 18th August.   It’s a “difficult” rated hike, ten miles round trip with a 4,800 elevation gain.   But after my Half Dome Conquest in June, I was feeling confident that I could make at least an attempt at the summit given an early enough start.  So permit secured, I researched parking options to get me as close to the trail head as possible.

But then the foot thing happened.  It’s as if my body rebelled, telling my mind “We’ll show you who’s boss!”  Or if you believe like I do that the mind is more powerful than the body, maybe I had just a twinge of self-doubt.  Regardless, the permit period came and  went without my goal attained.  I did learn one valuable bit of info.  There’s a great site out there called purmit.com where Cascades permits can be bought and sold at face value when the allotment is up through the official channels.

So back to the crossroads in the drizzling, foggy, Washington Weather.  Do I continue another 50 miles on down State Highway 504, knowing the best I can hope for is a Ranger presentation?  Or do I turn north on Highway 505 and continue toward my next destination leaving Mount St Helens on the list to be crossed off at another time?  I am literally “at the crossroads.”

When one has a career in the Travel Industry, that career is punctuated by news stories.  Employees trade tales of natural disasters like fishermen share stories of the one that got away.   “I still remember where I was the day US Air went into the Hudson….I located my passenger even before US Air did!”   “I was the first to get the call on the stormy afternoon when Delta 191 went down…I knew even before the teletype came through.”   It’s all hands on deck trying to assess what clients might be in the area, whether they be business travelers enroute over the ash cloud, or vacationers staying in the nearby Lodge.  It’s easy to recall “Where were you when…?”

On the morning Mt St Helens erupted, I was sleeping.  I worked the night shift in Braniff Reservations.  I remember waking up to the news on the FM radio and thinking “OH CRAP!  MANDATORY OVERTIME” as flights in and out of Seattle cancelled.  A few months later, I took a “fam” trip to Seattle with some co-workers hosted by the Seattle Board of Tourism to boost tourism in the area.  But the closest I got to Mt St Helens was the souvenir beige pottery coffee mug I bought made from the ash of the volcano.

So yes, Mr. Muir.  The mountains are calling.  And view or no view, I too must go… 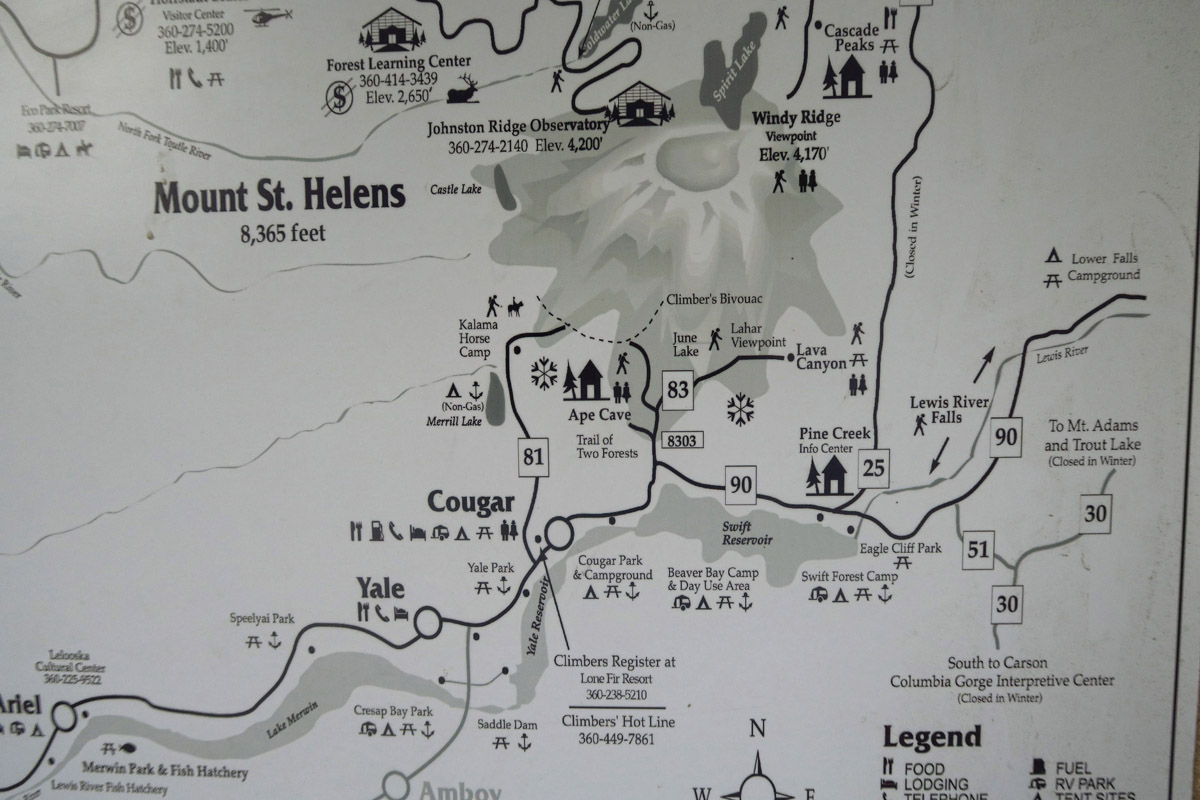 The mountain can be approached from the south or the west. The south route near Cougar Campground is the climbing route, while the observatory is accessed via the western approach. 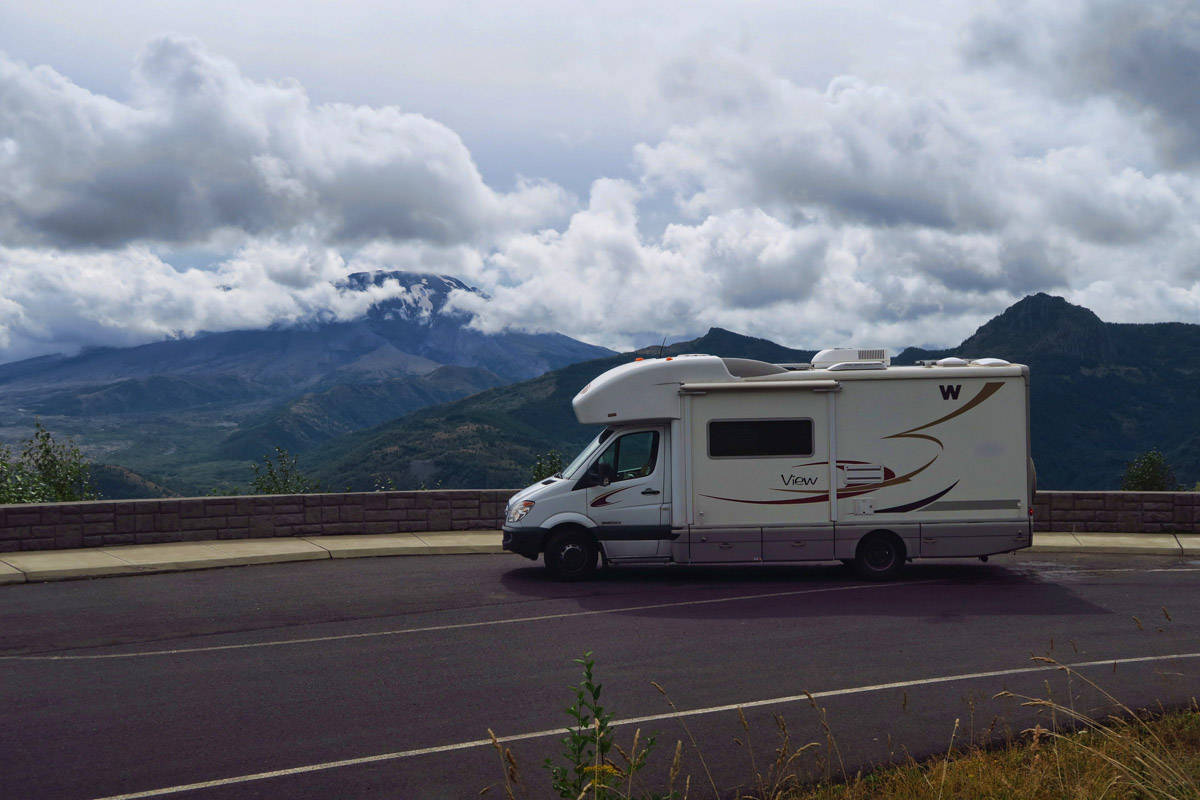 Cloud cover could go either way at this point. I hurry along… 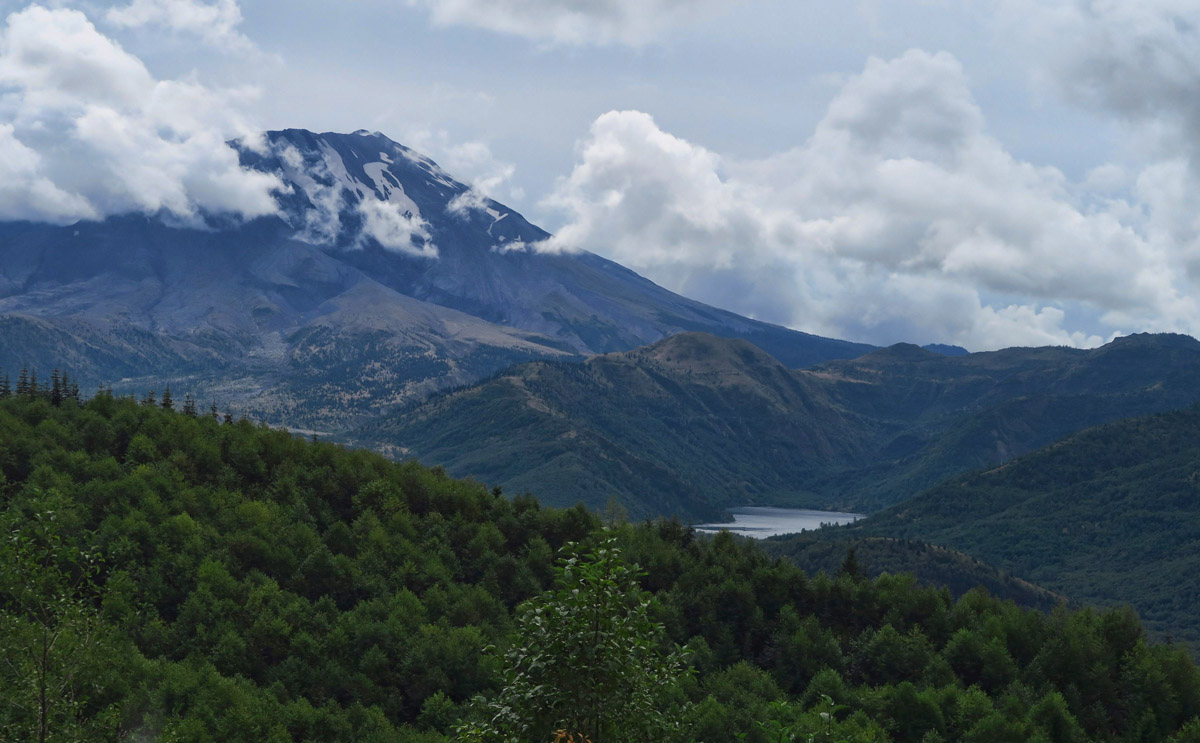 Coldwater Lake in the distance on the right.

Don has moved east for a while to visit an old friend he met in Honduras on his drive down through Central America.   Bob now has an organic farm near Bend, OR, and in addition to visiting, Don will also use his garage and tools to install his solar panels.

Meanwhile, I am now an “off duty tour guide,” free to meander on my own toward the Olympic Peninsula.   So I decide to take a detour and drive down the road toward the mountain.  The newly built highway, State Route 504, or “Spirit Lake Memorial Highway” through the Toutle River Valley is worth the drive alone in spite of the low hanging clouds.  The frequent turnouts with overlooks of the valley and Elk viewing areas makes for a very scenic drive. 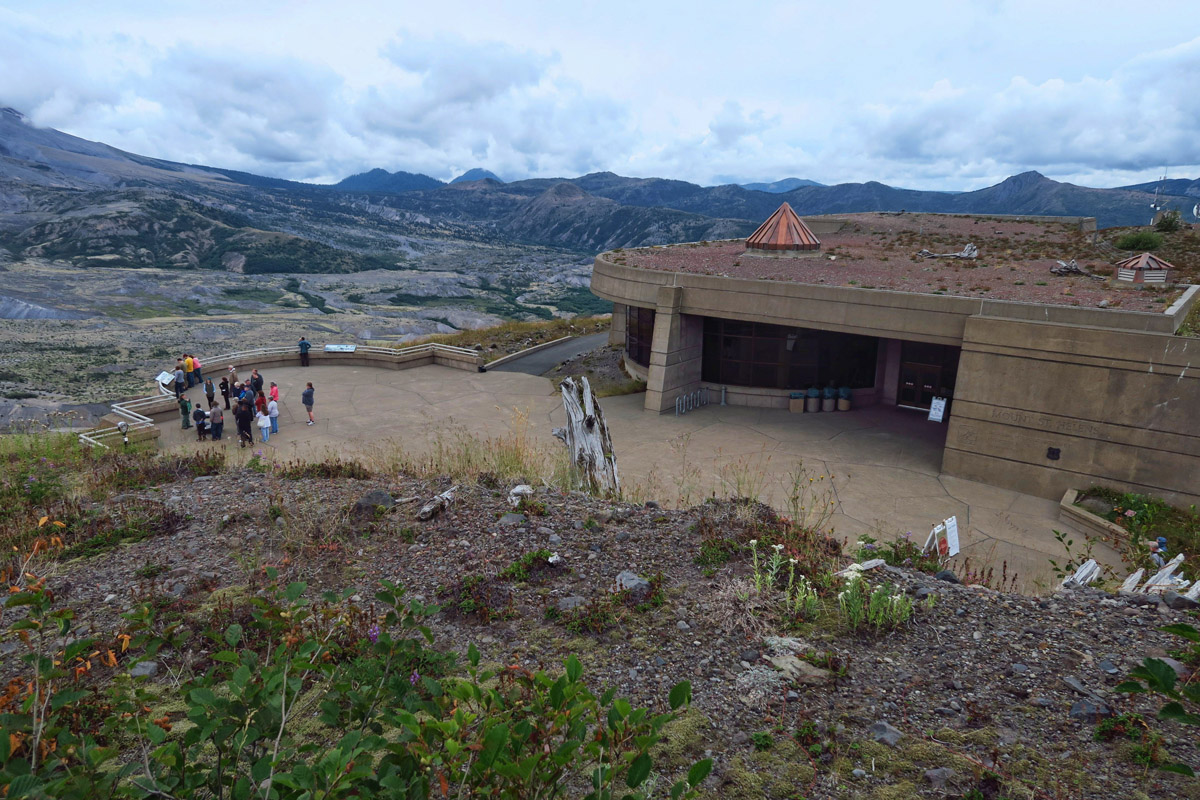 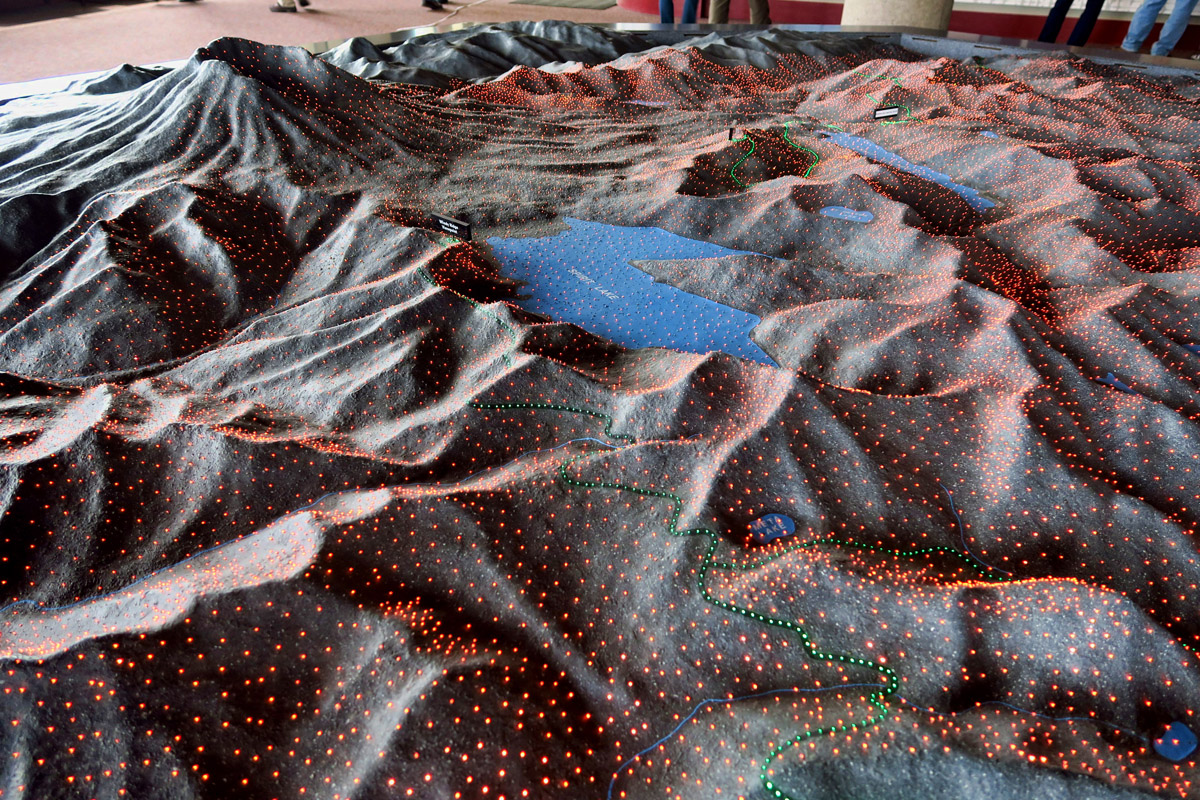 Inside the Observatory is a diorama of the eruption with tiny color-coded fiber optic lights that show the spread of the debris. 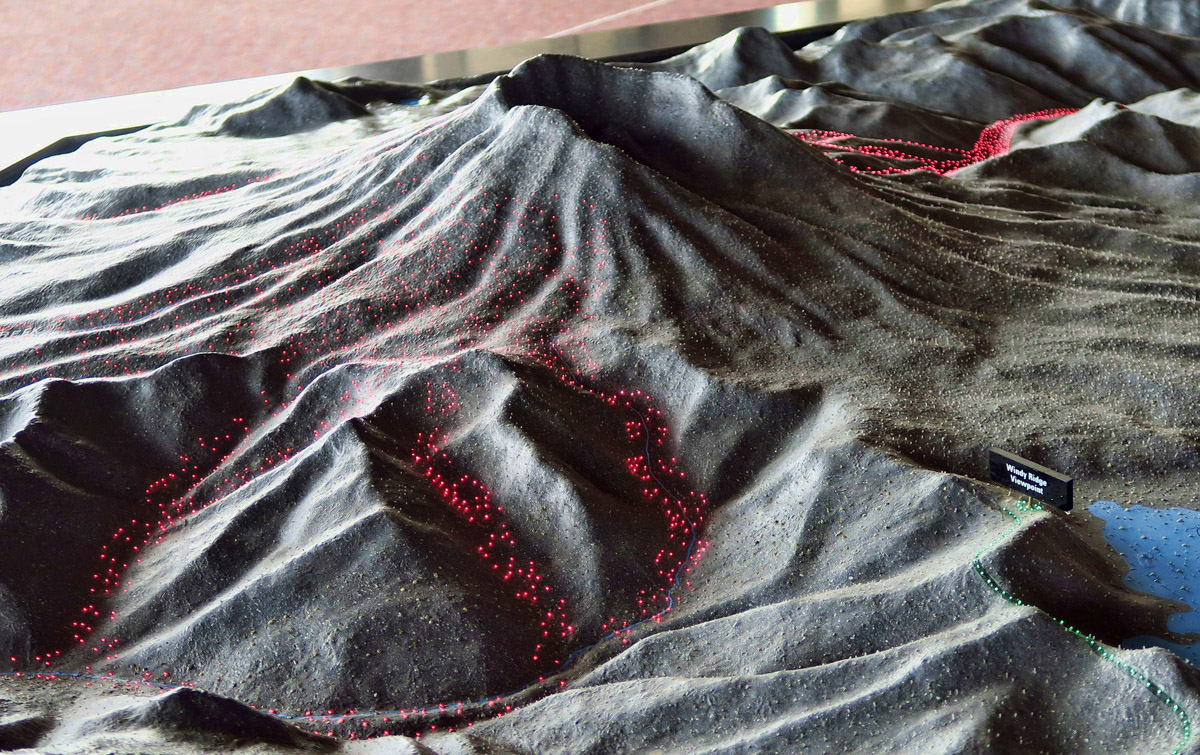 On May 18th, 1980 at 8:32am, a 5.1 earthquake occurred causing the already compromised north face, weakened and bulging from the building gasses, to slide away.   The blast that followed destroyed more than 30 miles of the original highway leading to the mountain when 60 to 600 ft of debris filled the Toutle River Valley, burying the old highway.  The eruption blew down more than 230 sq miles of forest in three minutes, burying 14 miles of the Toutle River and its tributaries. 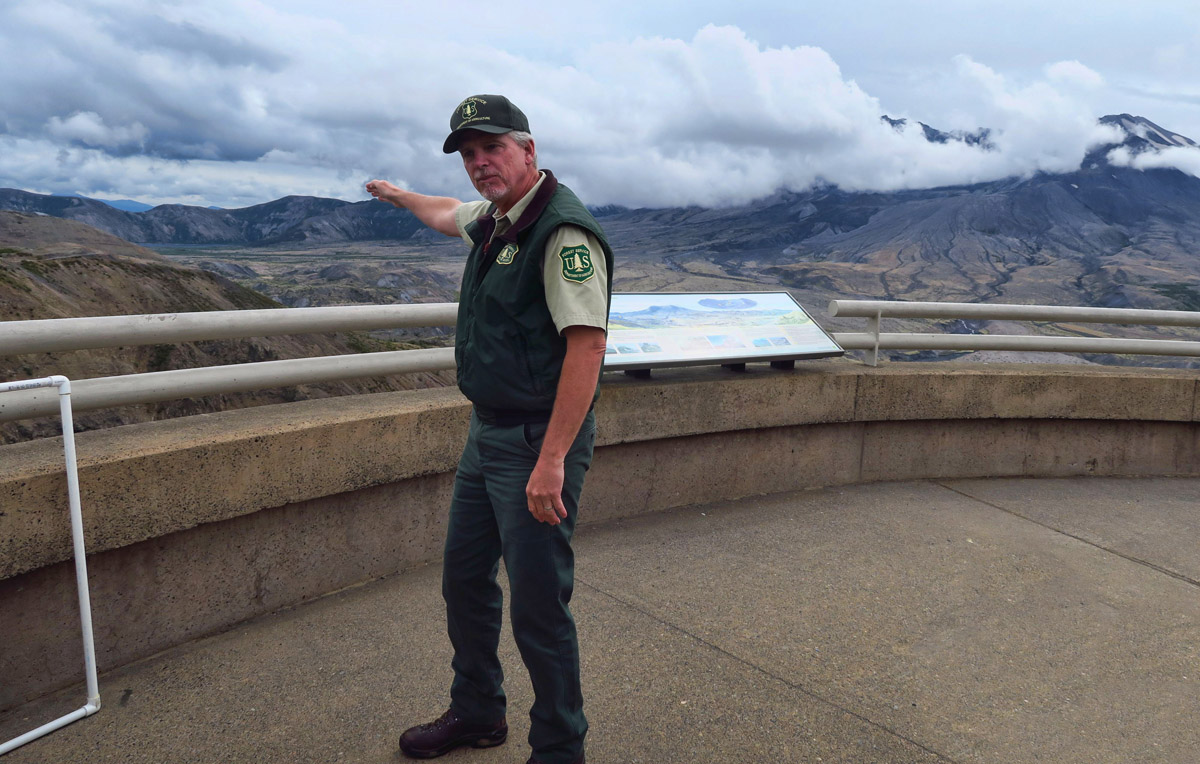 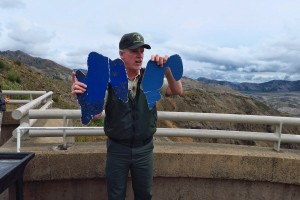 Here, he demonstrates how the eruption changed the size, shape, and depth of nearby Spirit Lake. 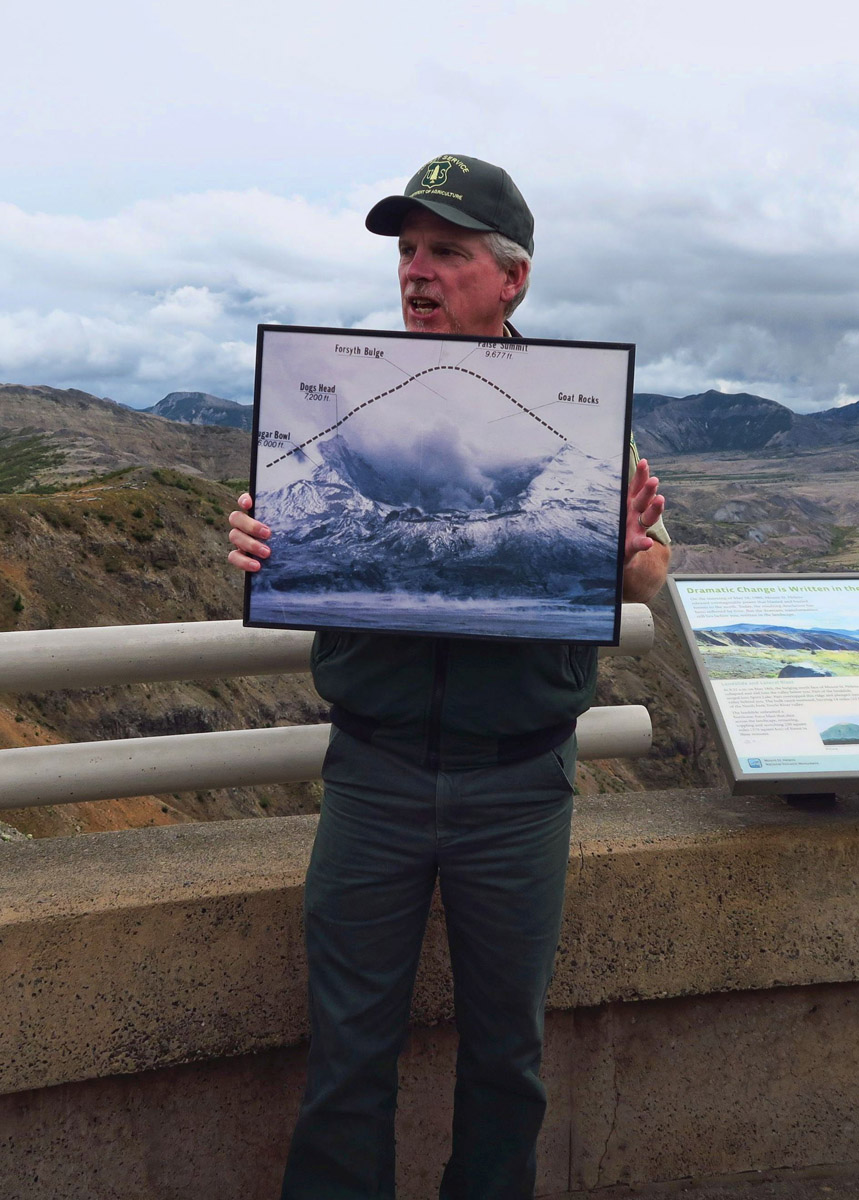 This photo shows original size and shape of the mountain overlaying the new profile.

The new State Highway 504 was positioned further up the hillside to avoid future debris flow.   Steps were taken to minimize impact on environment, such as placing utilities underground and bridging over as opposed to crossing through wetlands.  The road has many RV friendly turnouts and viewpoints, particularly once you enter the “blast zone.” 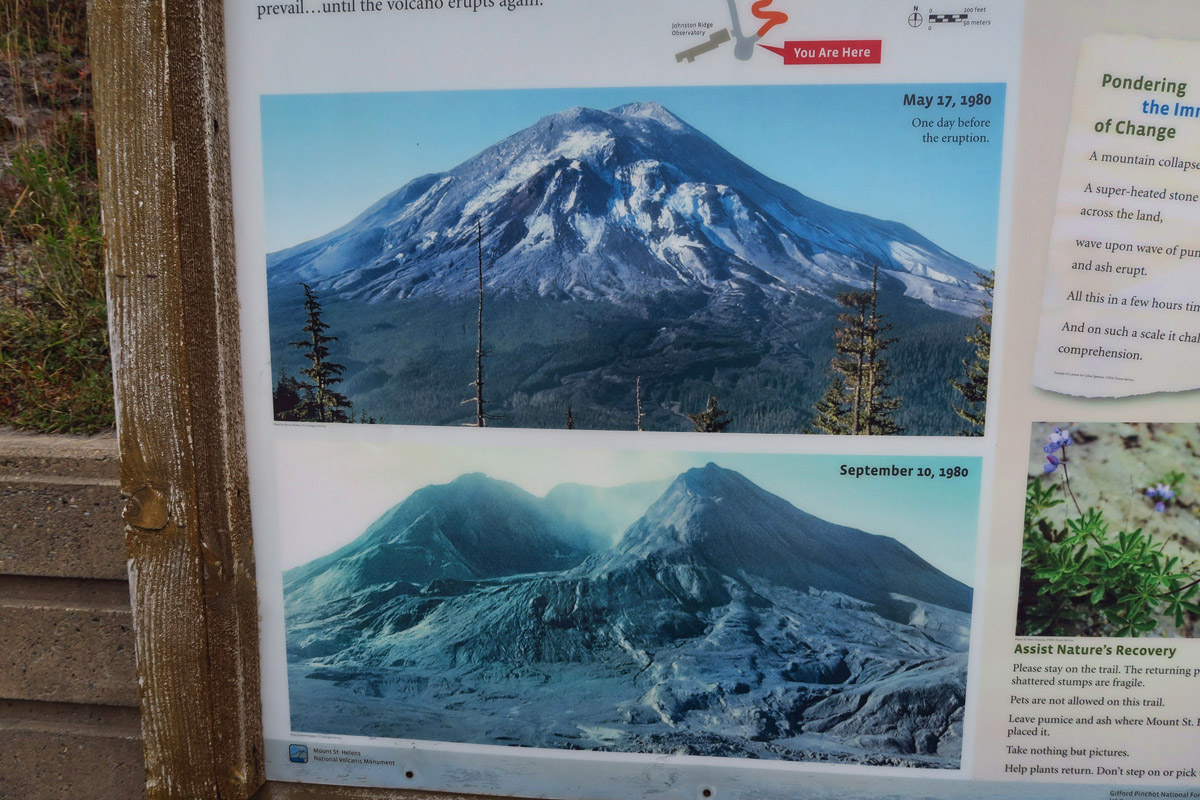 Before and After photos on display inside the observatory. 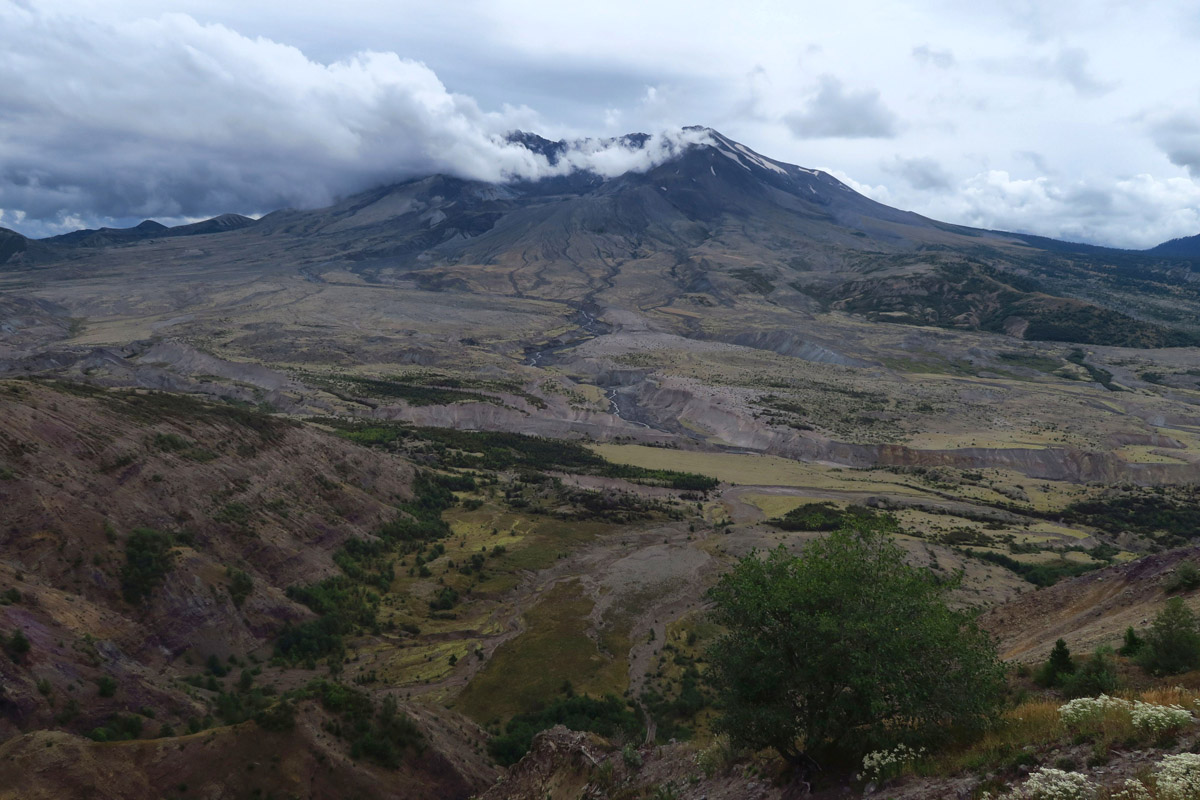 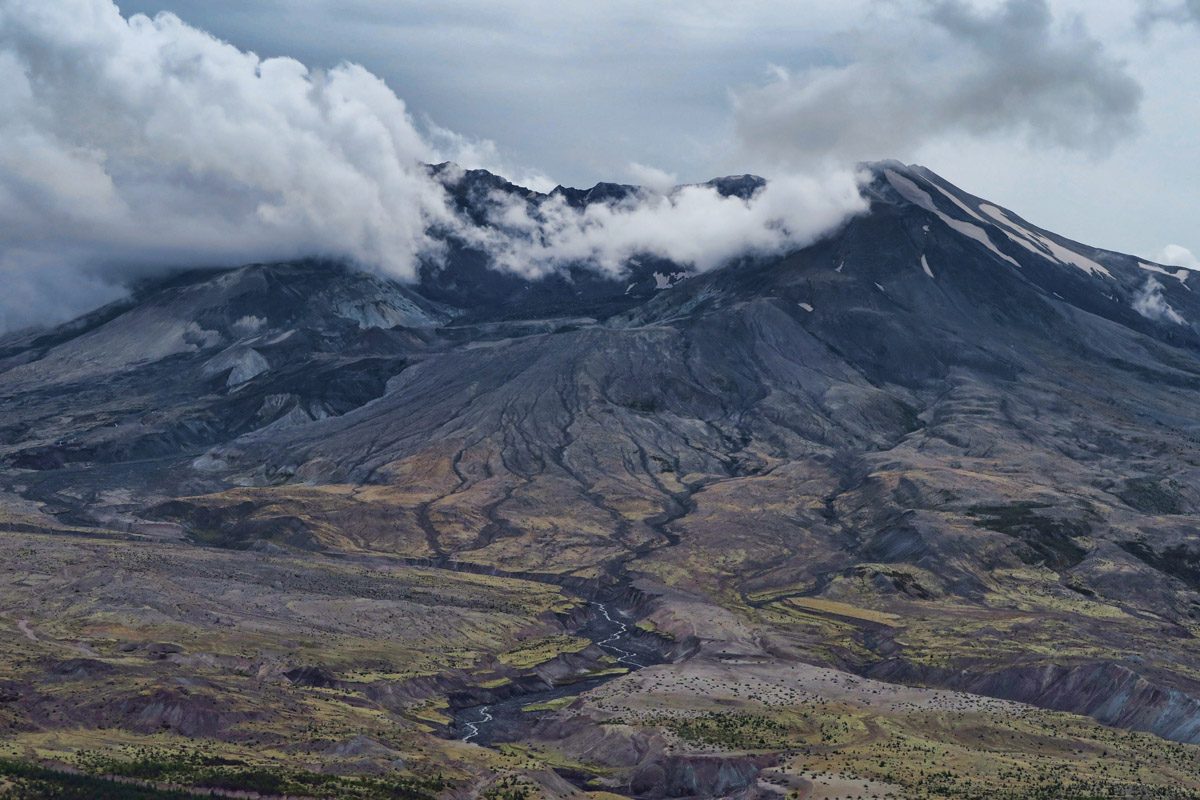 Everyone loves a good set of stats that “blow you away,” and there is no finer assembly than those that followed when the north face of Mt St Helens crumbed.  The lateral blast traveled 300 mph.  It caused the surface of nearby Spirit Lake to raise 200 feet and doubled the surface area.  The eruption column reached 80,000 ft and dropped enough ash to cover a football field-size column of ash 150 miles high. 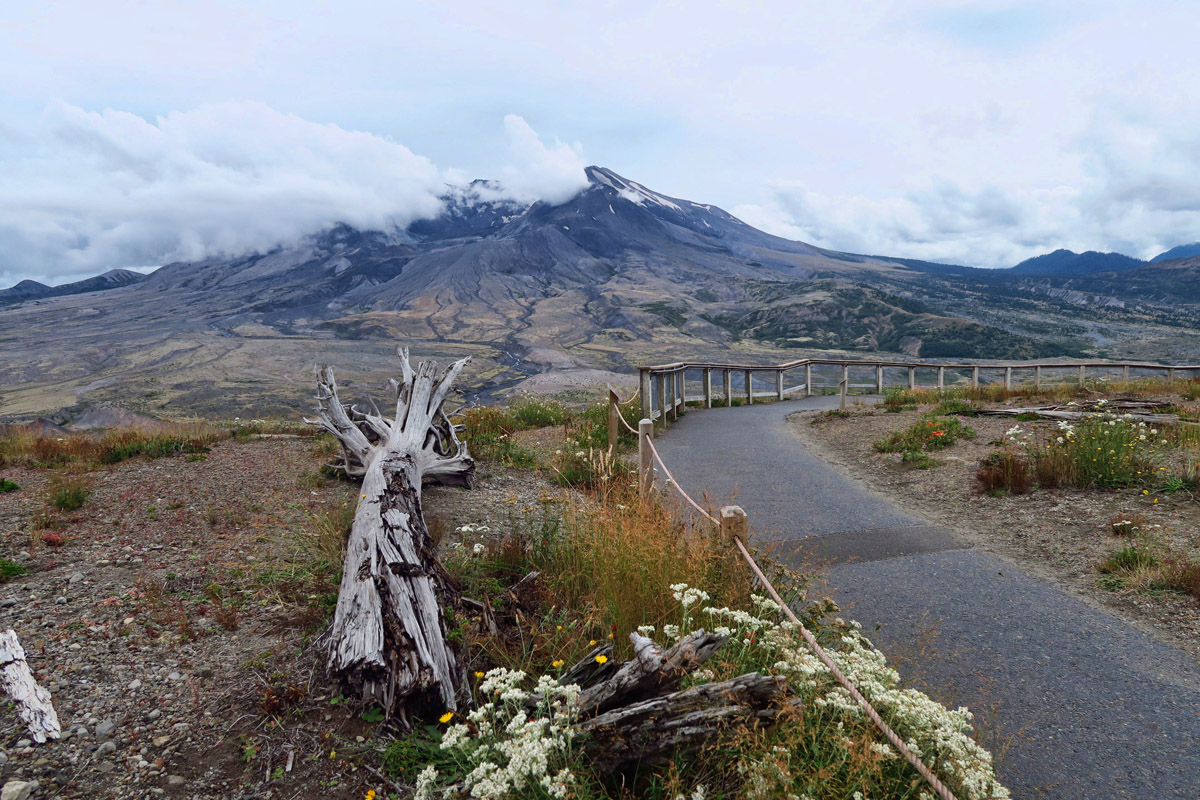 Several hiking trails leave from the observatory, offering great views of the crater. 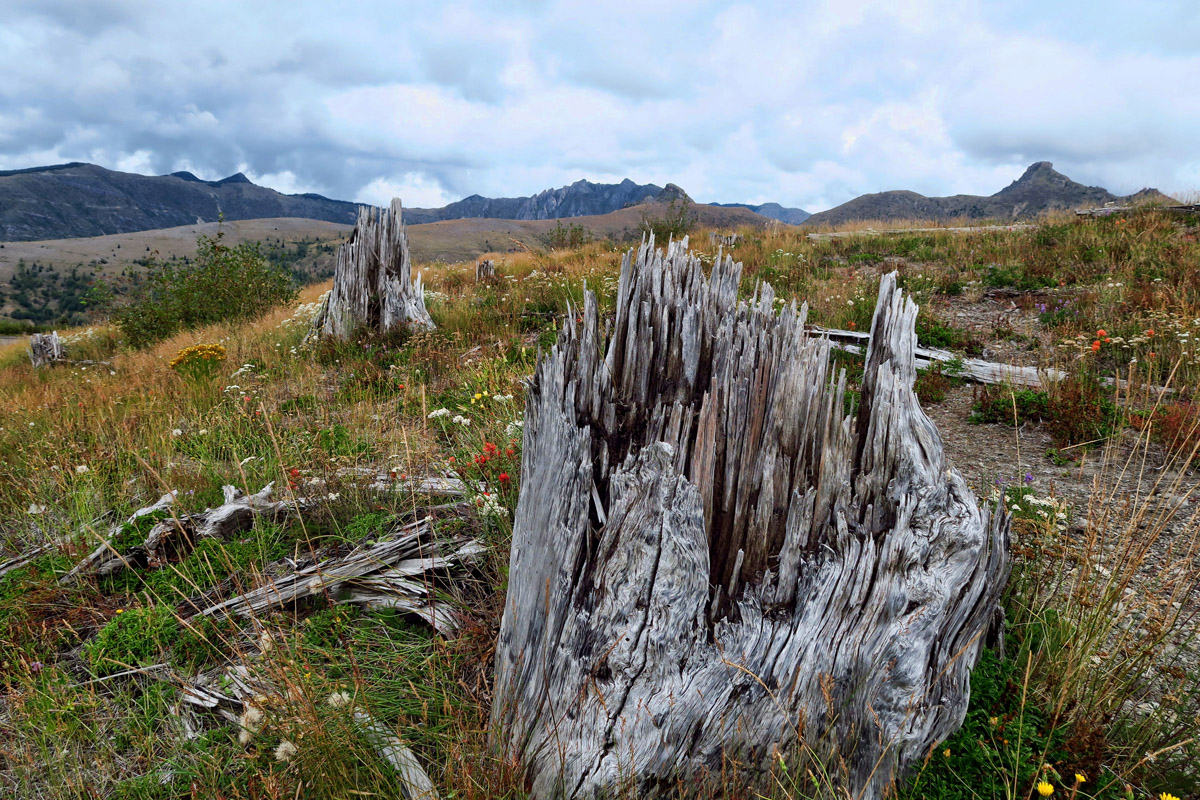 Many stumps from the 100 ft tall trees remain. 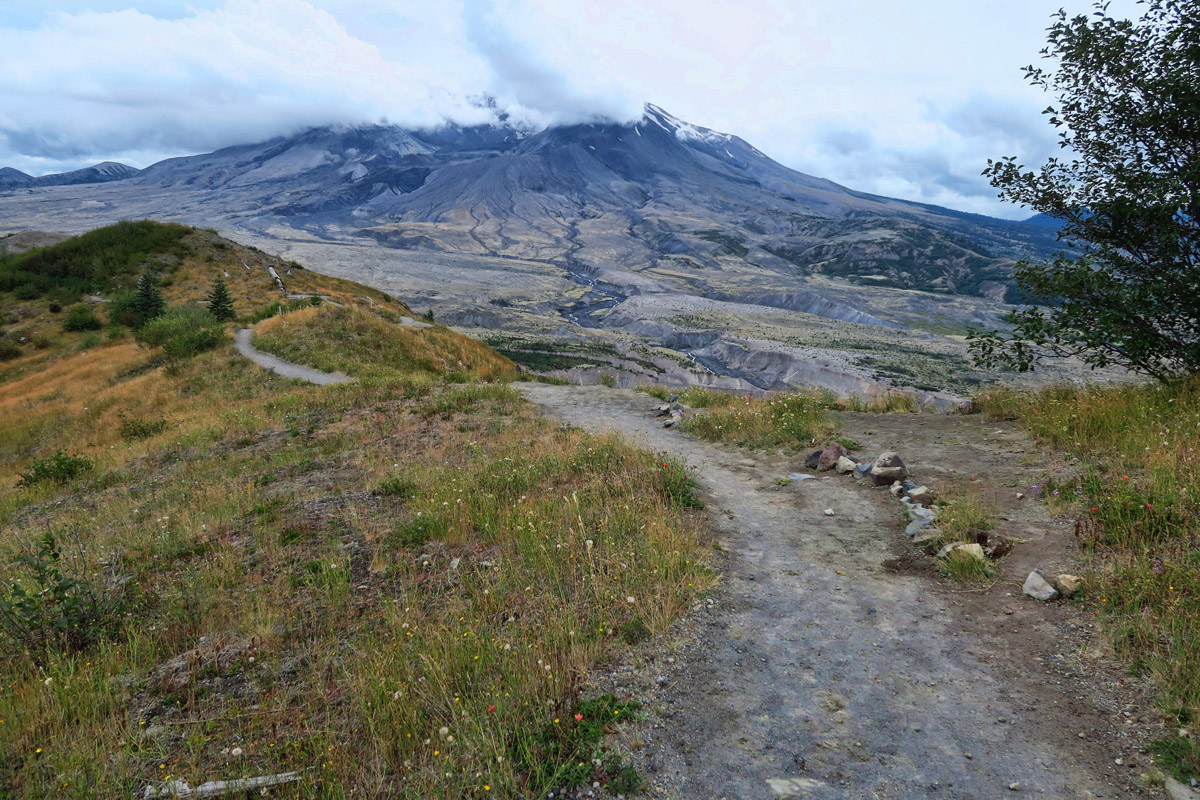 Carnage was record-breaking as the blast lobbed 1,314 feet off the top, killing 57 people in its wake, one of those being David A Johnston, volcanologist for whom the observatory is named.  David was camped out at an observation post 6 miles away when the volcano blew.  His last words were, “Vancouver!  Vancouver!  This is it!”    His remains were never found.  An estimated 7,000 deer, elk, and bears also perished. 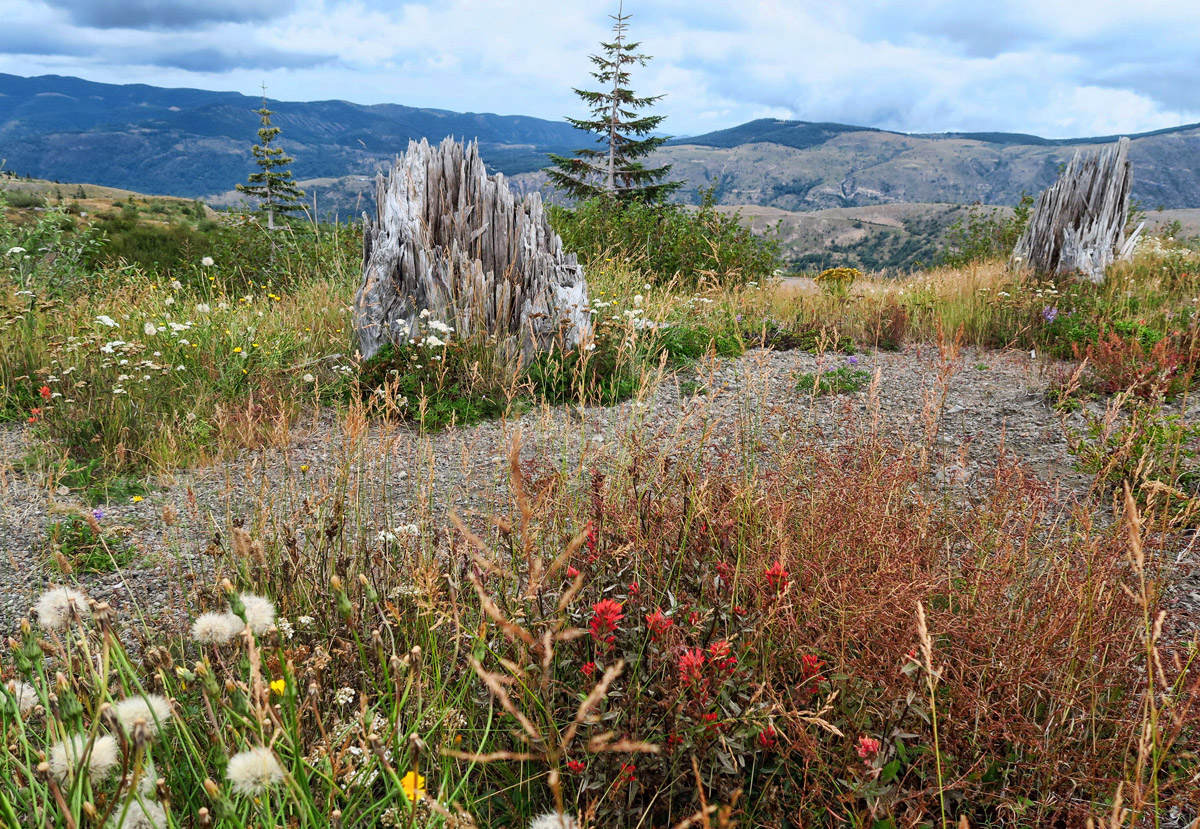 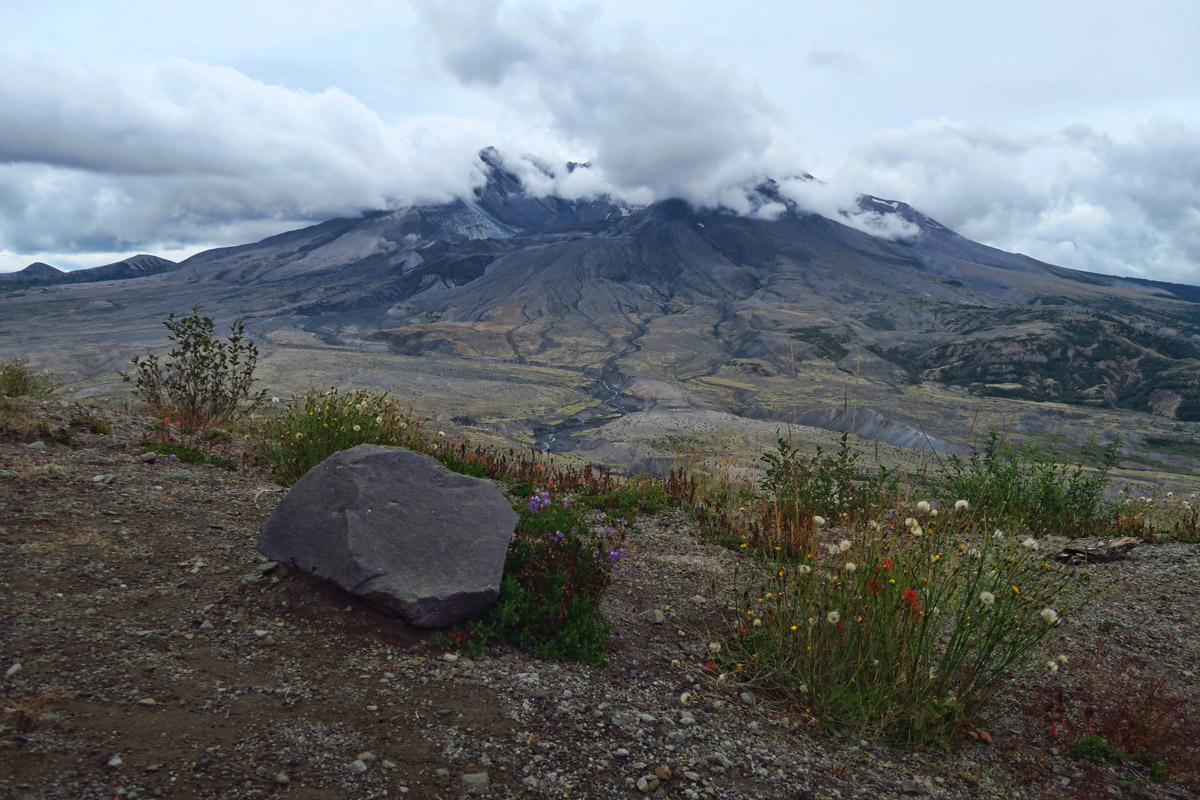 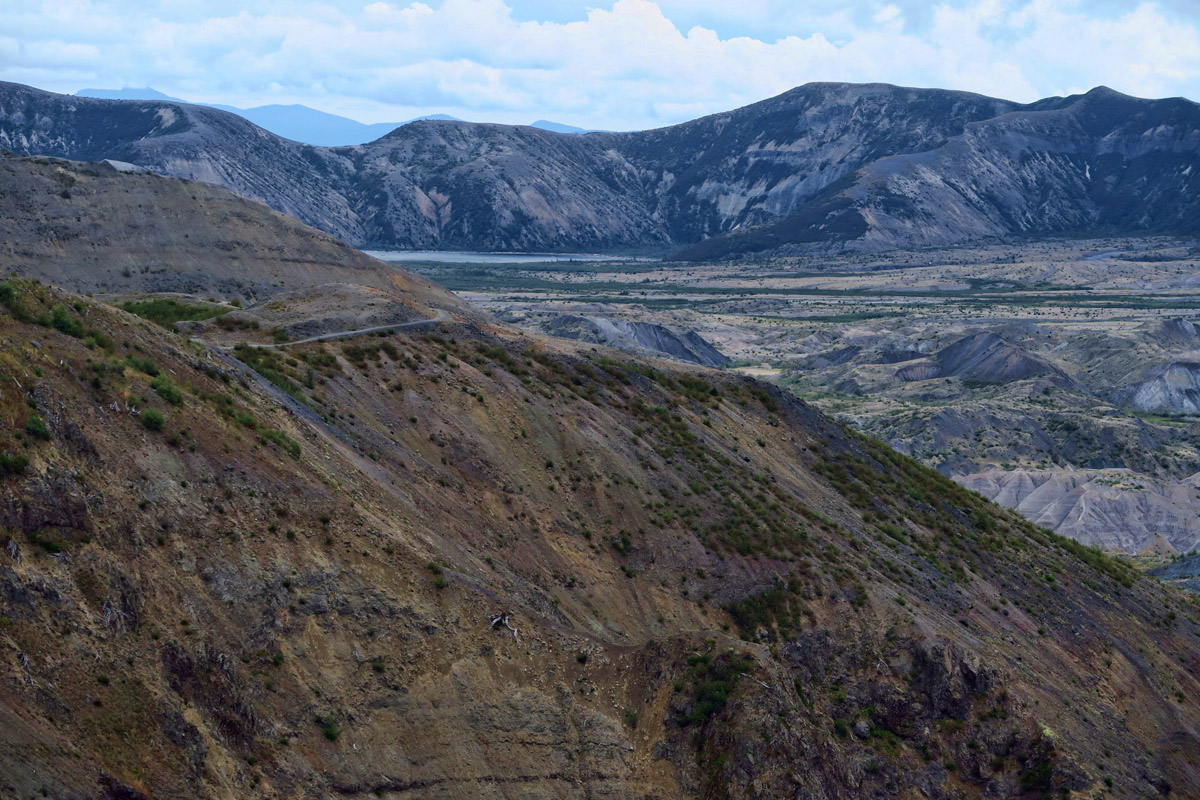 But of all the facts, figures and trivia found in the Johnston Ridge Observatory, nothing amazes me more than the element of sound….there was none that day, at least not for those who were within 50 miles of the blast.   The hole where the vertical eruption occurred was small, directing sound waves upward, and debris in the cloud muffled the blast creating a “zone of silence” within 50 miles.  Beyond this 50 mile zone where sound waves did not travel, the blast was heard 575 miles away. 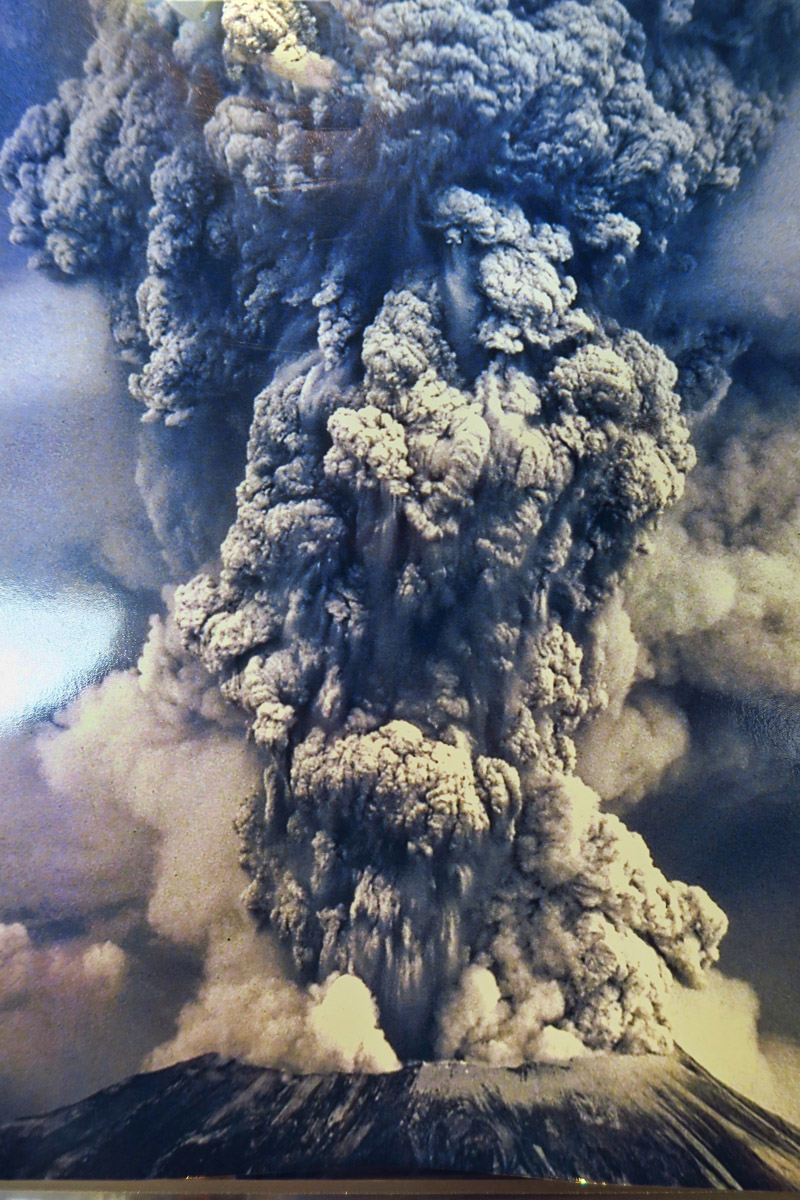 Poster of the eruption column on display in the Johnston Ridge Observatory. 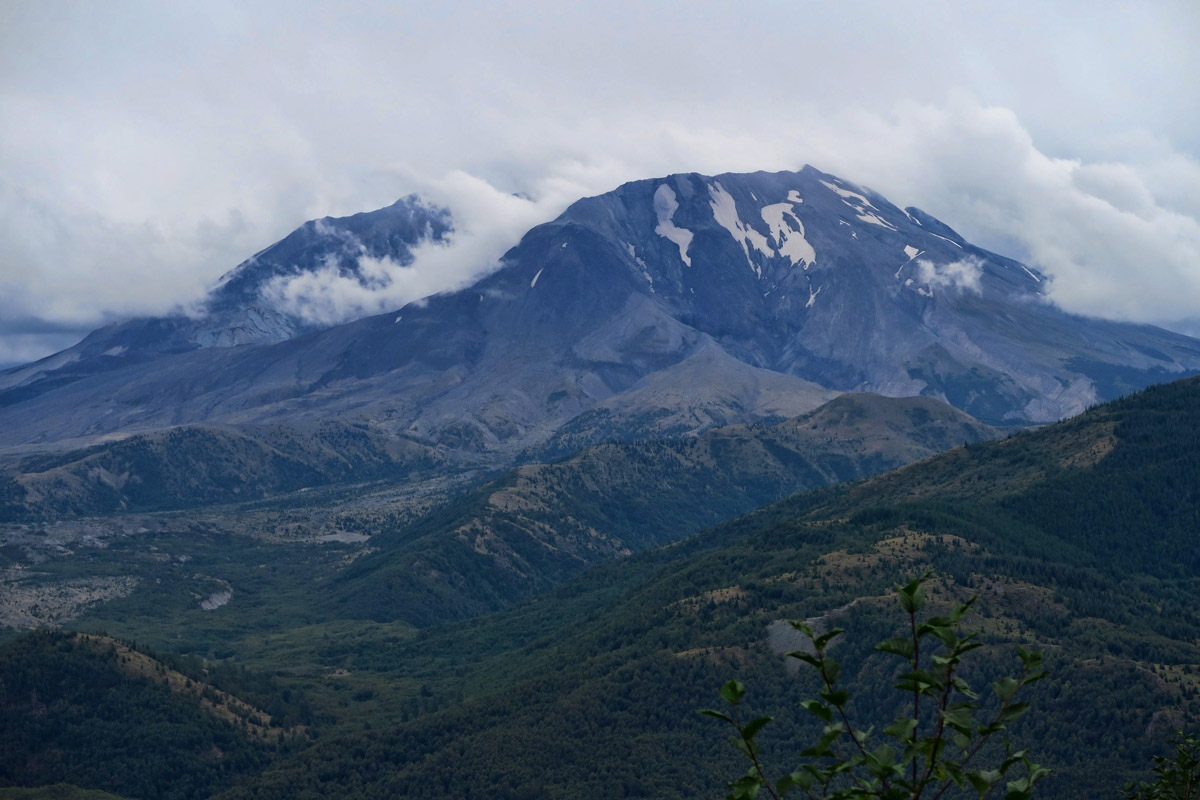 Halfway to the Johnston Ridge Observatory, I stopped at the Forest Learning Center overlook for a view of elk grazing in the now fertile Toutle River Valley. The volunteer at the overlook advised “I think you had better go straight there.   I don’t like the looks of those low lying clouds moving in.“  I did get a look at the mountain, albeit through the clouds.  But in the case of Mt St Helens, seeing it is only temporary.  Due to the size of the swarm of recent earthquakes and mounting dome within the crater, they estimate the volcano will likely blow again within our lifetime.

16 thoughts on “So What if the Mountains Are Calling…”