Highway 20 is Washington State’s longest highway. Known as the North Cascades Scenic Highway and part of the Cascades Loop, it runs right through the heart of North Cascades National Park, earning its billing as “The most beautiful mountain highway in the state of Washington.” 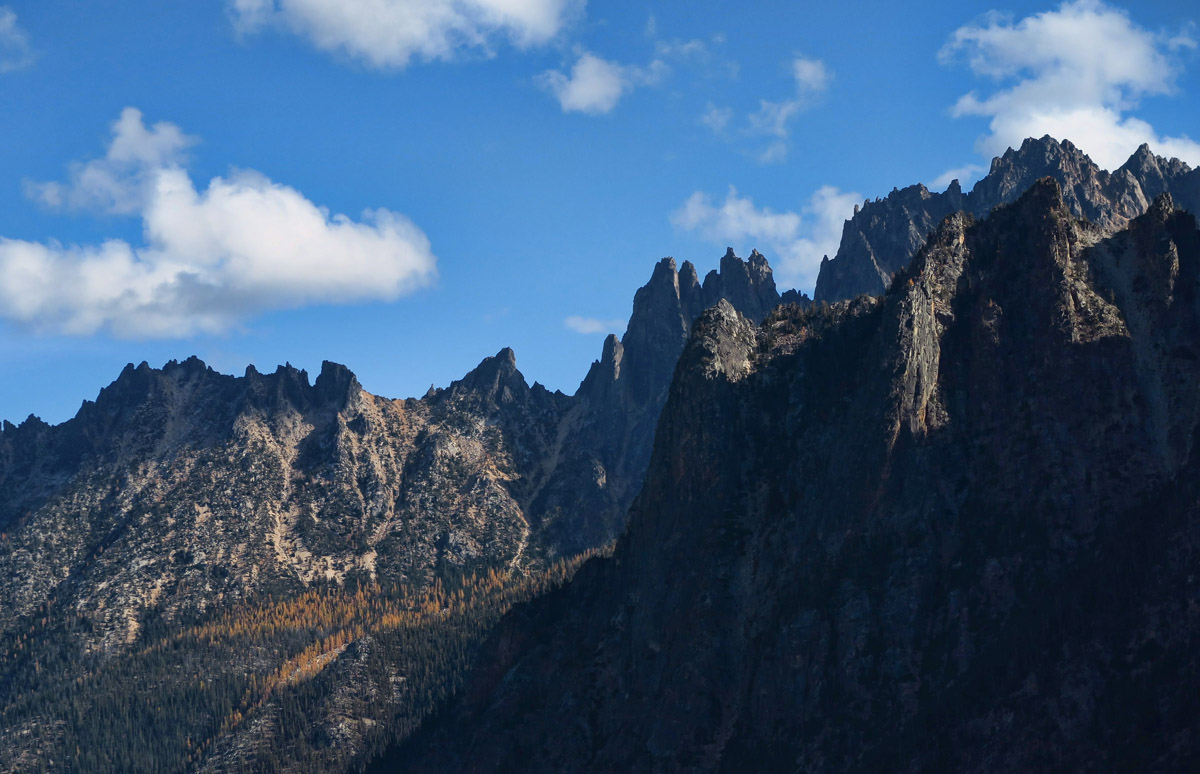 The drive through the park along Highway 20 is stunning. 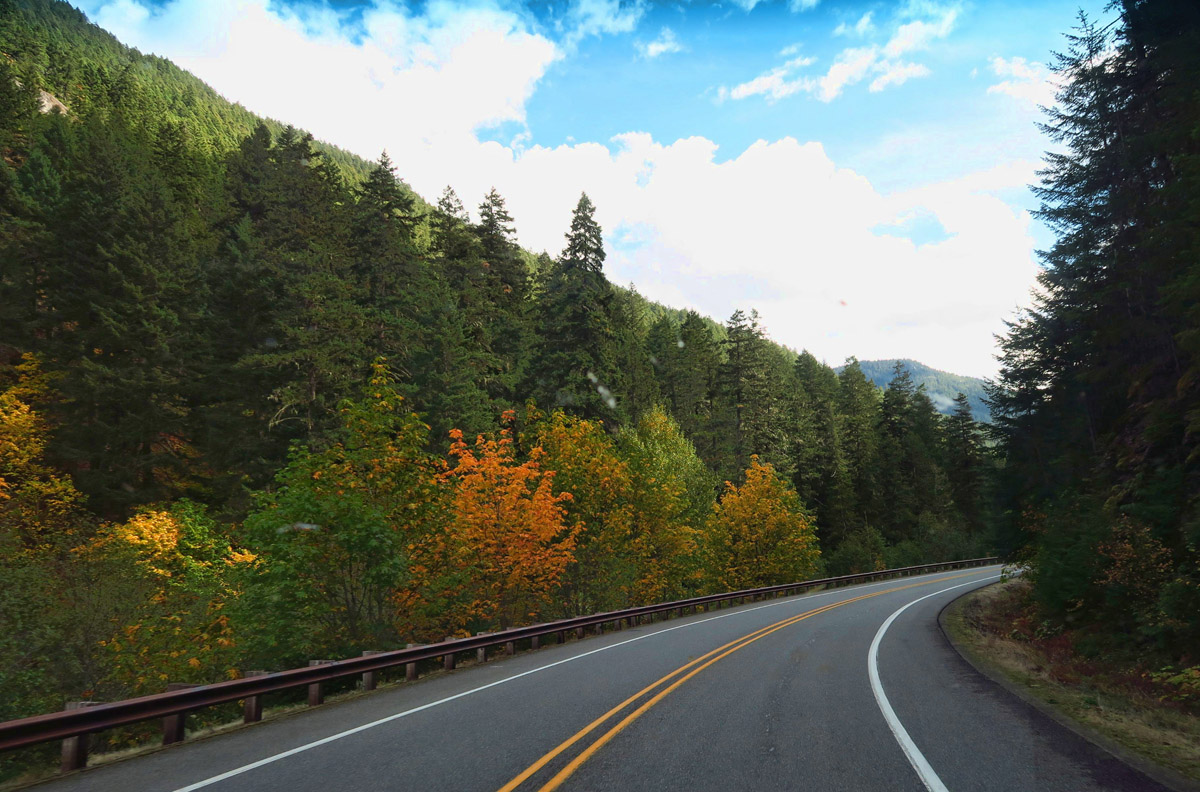 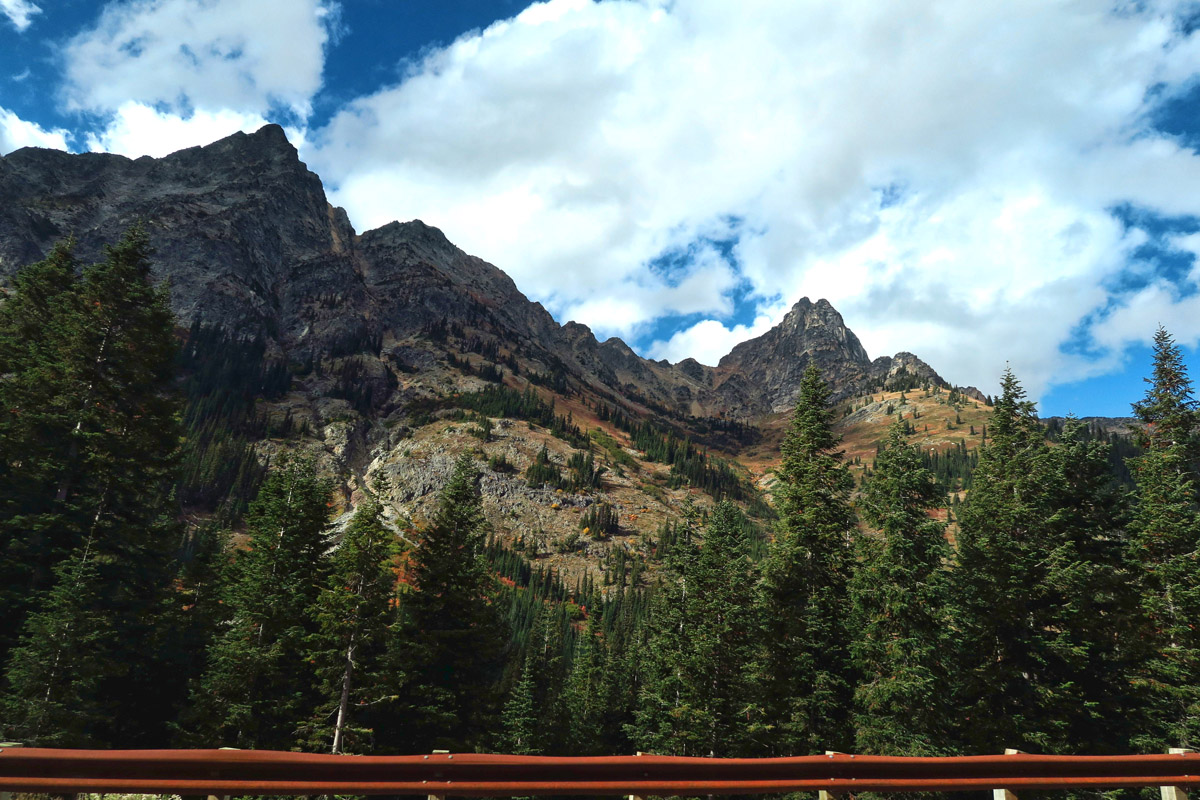 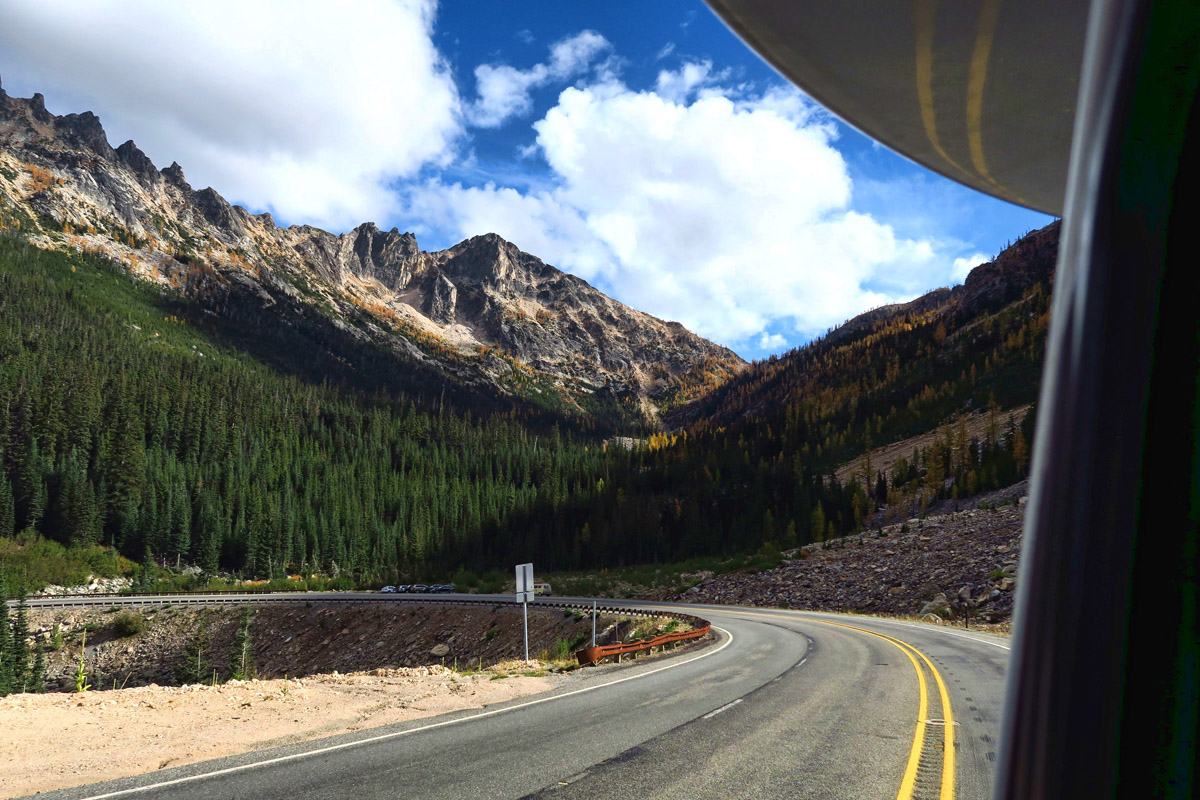 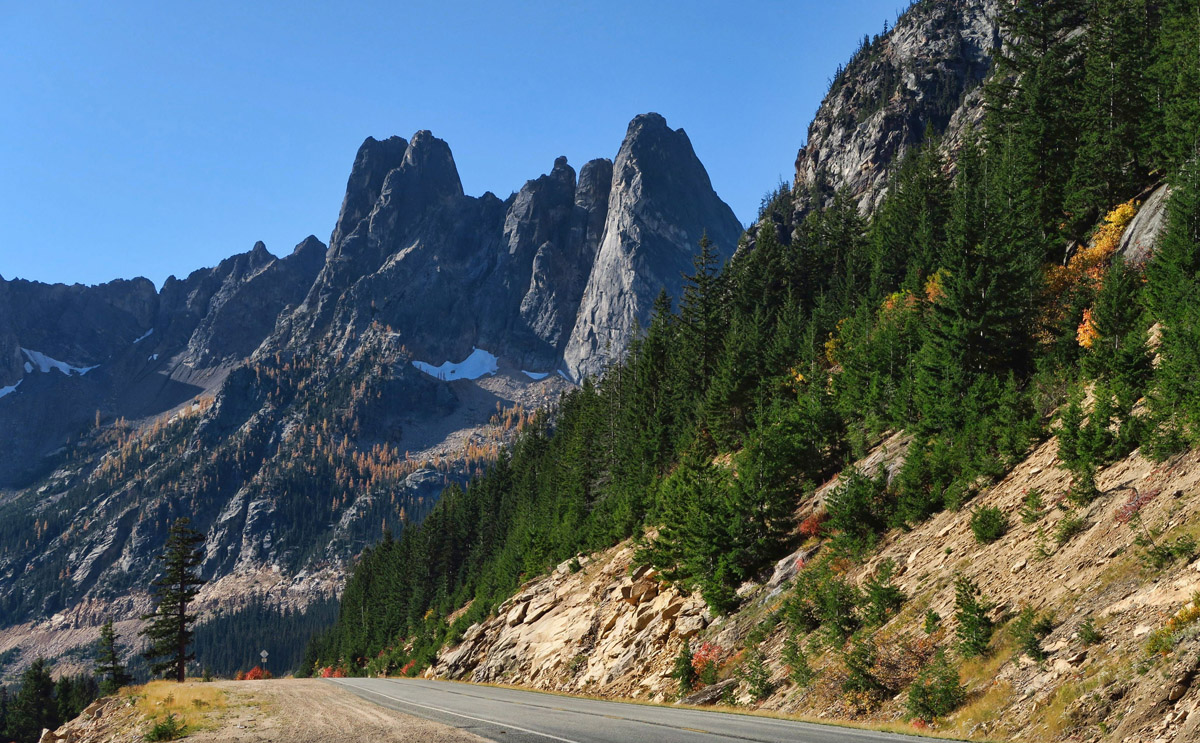 Since this major thoroughfare also doubles as the “park road,” the only access through the National Park, there is no entrance fee for North Cascades. One can gawk fee-free to their hearts content. (Yes, I know, nothing about our government is “free,” but at least in this case, I don’t have to pay twice!)

I personally feel that North Cascades is a highly underrated National Park. I had never even heard of it until I began my quest to see all 59 NPS areas designated with official “Park” status. Only a 3 hour drive from Seattle, you would expect it to be mobbed given the scenery, hiking, and kayaking opportunities. After all, the NPS bills the North Cascades as “the wildest and steepest mountains in the lower 48 states.” Within the park boundary are over 300 glaciers, the wild and scenic Skagit River, ice blue glacial lakes, and old growth forest. Yet many of the facilities, including the largest campground, Newhalem, are already closed despite the fact that we have arrived in the midst of fall splendor. 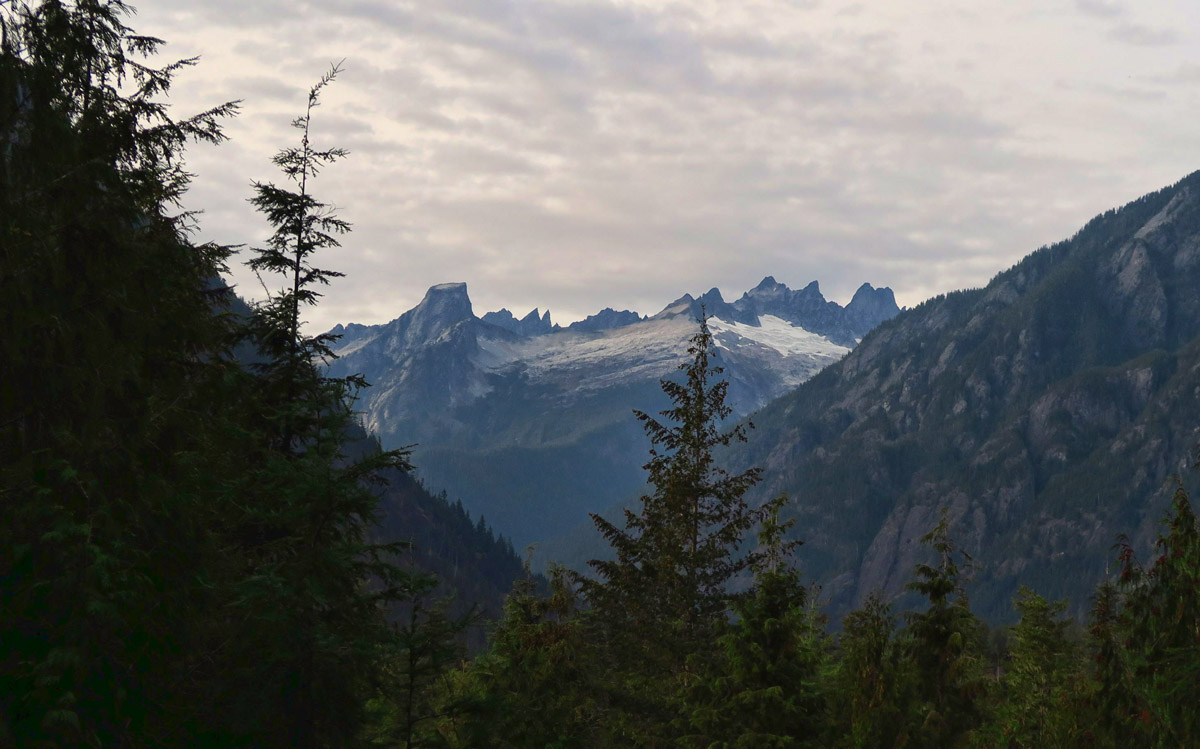 View of the Pickett Range from the Sterling Mundo boardwalk trail at the Newhalem Visitor Center. 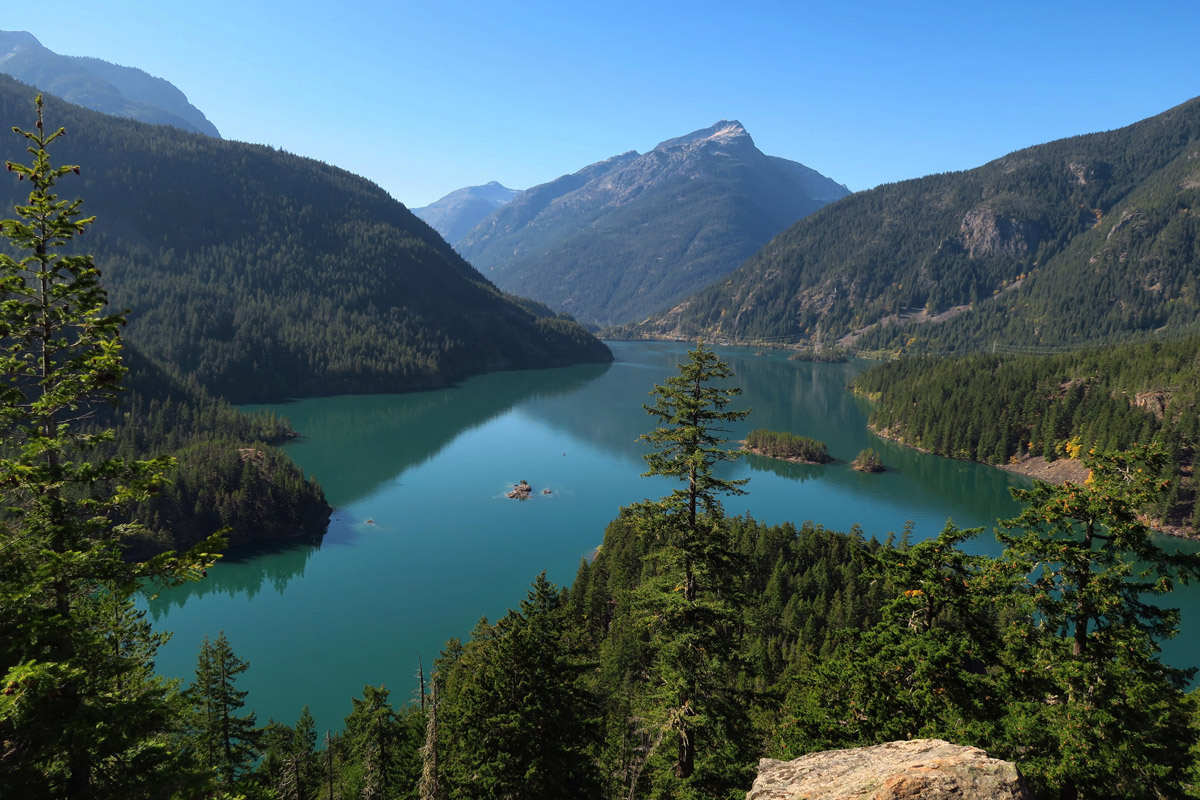 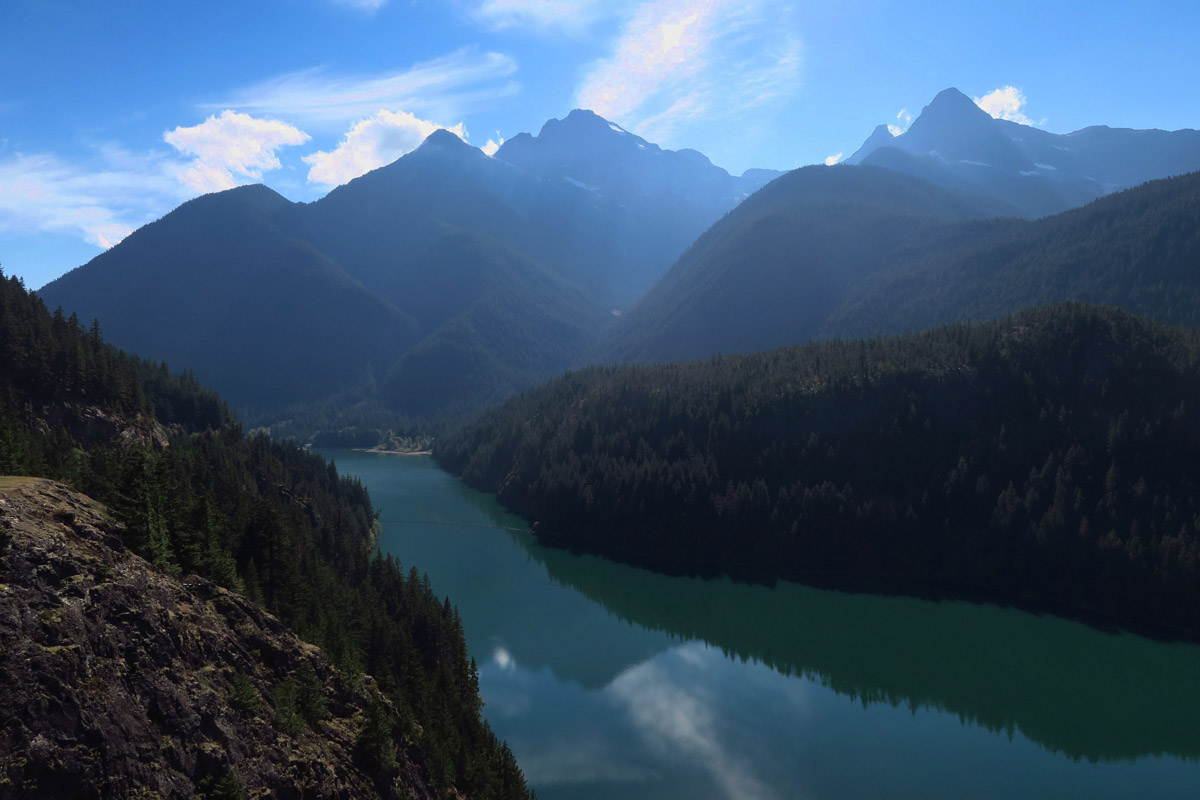 Diablo Lake is part of the Skagit River Hydroelectric Project and managed by Seattle City Light.

Thankfully, there were still a couple of the smaller campgrounds still open for the season. But with services turned off already, they were also fee-free. We found two beautiful spots in the Goodell Creek campground located side by side amidst the falling leaves. With all the rising campground prices inside the National Parks, it almost feels like stealing to be staying here alongside the beautiful river for free.

Another aspect that’s “free” at this time of the year is freedom from crowds. After jockeying for campground spaces all summer, it feels almost surreal to pull into a National Park without a reservation and be able to get a spot! The park is quiet, trails are empty, and even though the weather is perfect, the Newhalem Visitor Center is open on weekends only. 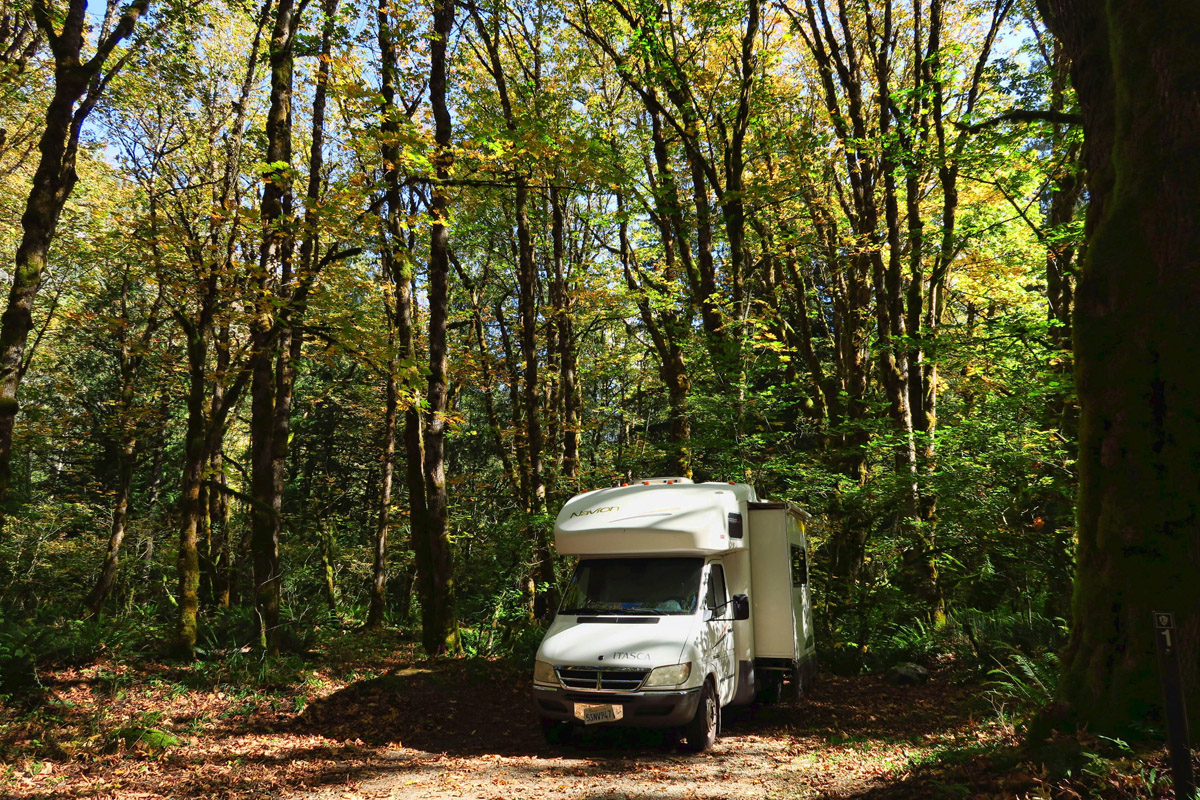 Goodell Creek Campground, only 21 sites but very scenic with nice sound effects from the Skagit River. 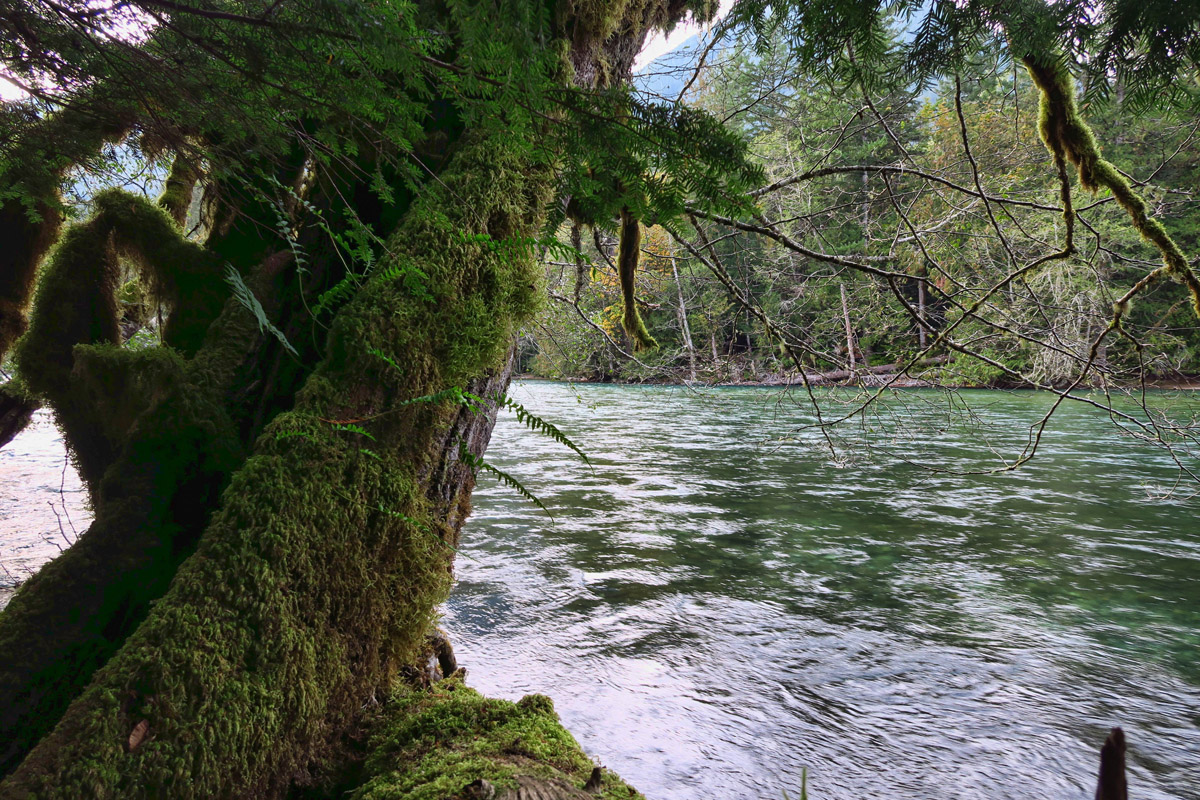 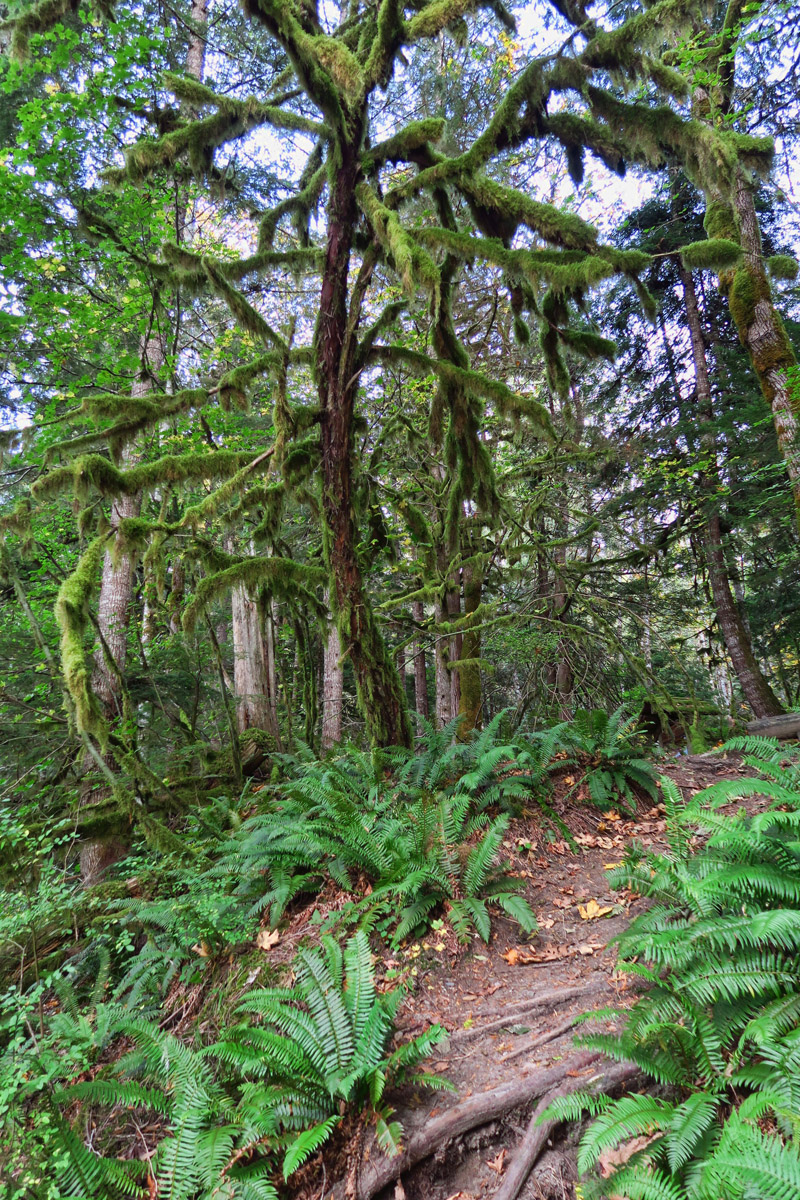 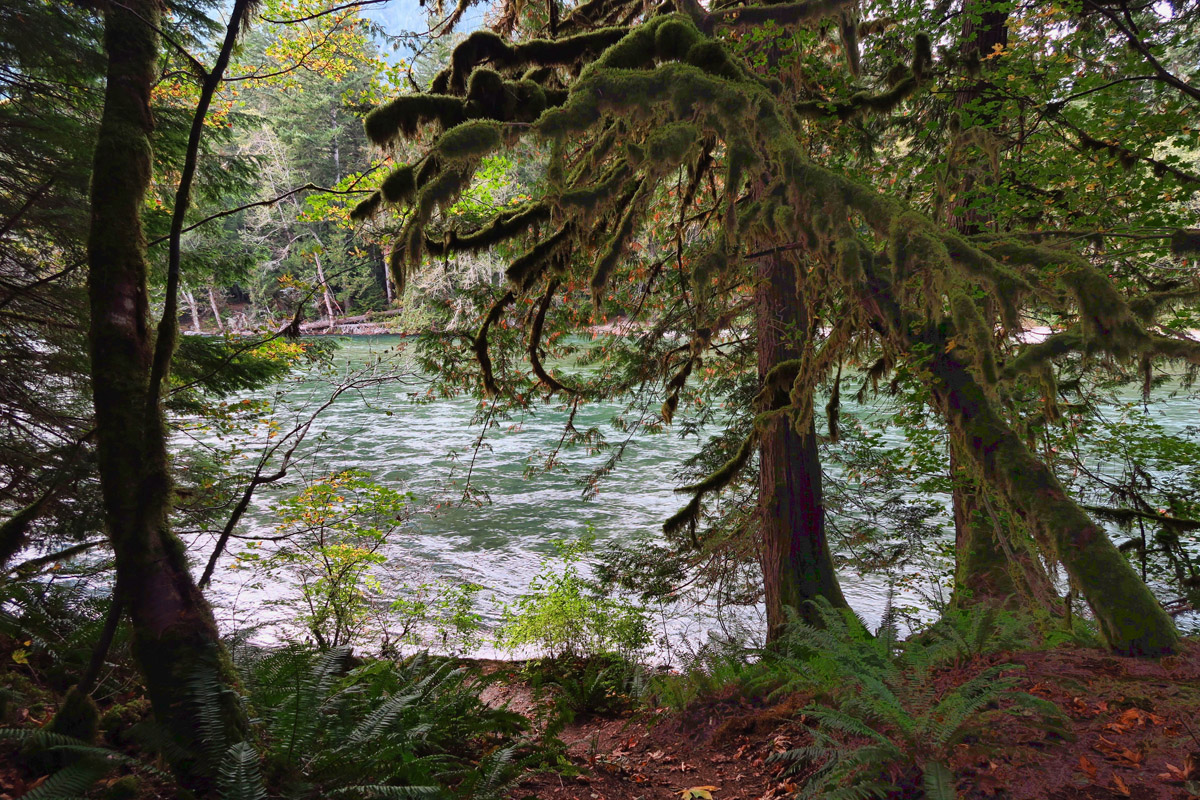 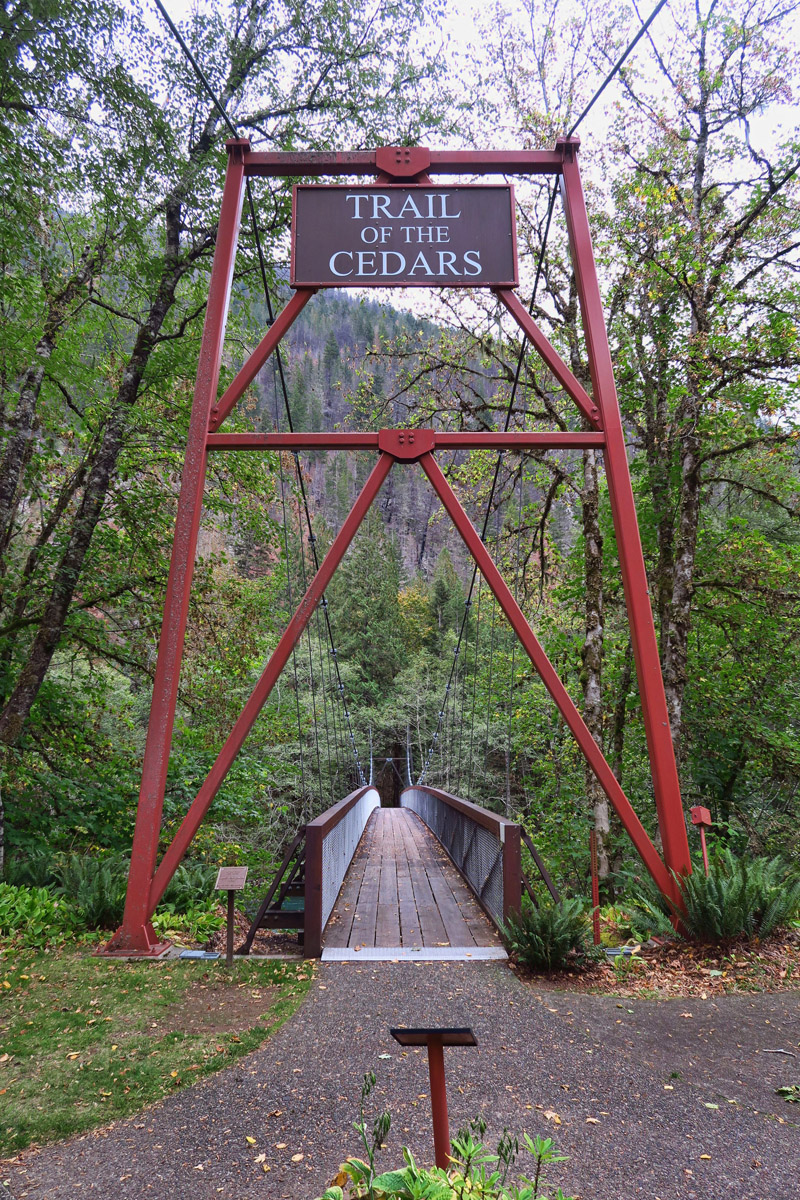 Trail of the Cedars Loop through old growth forest. 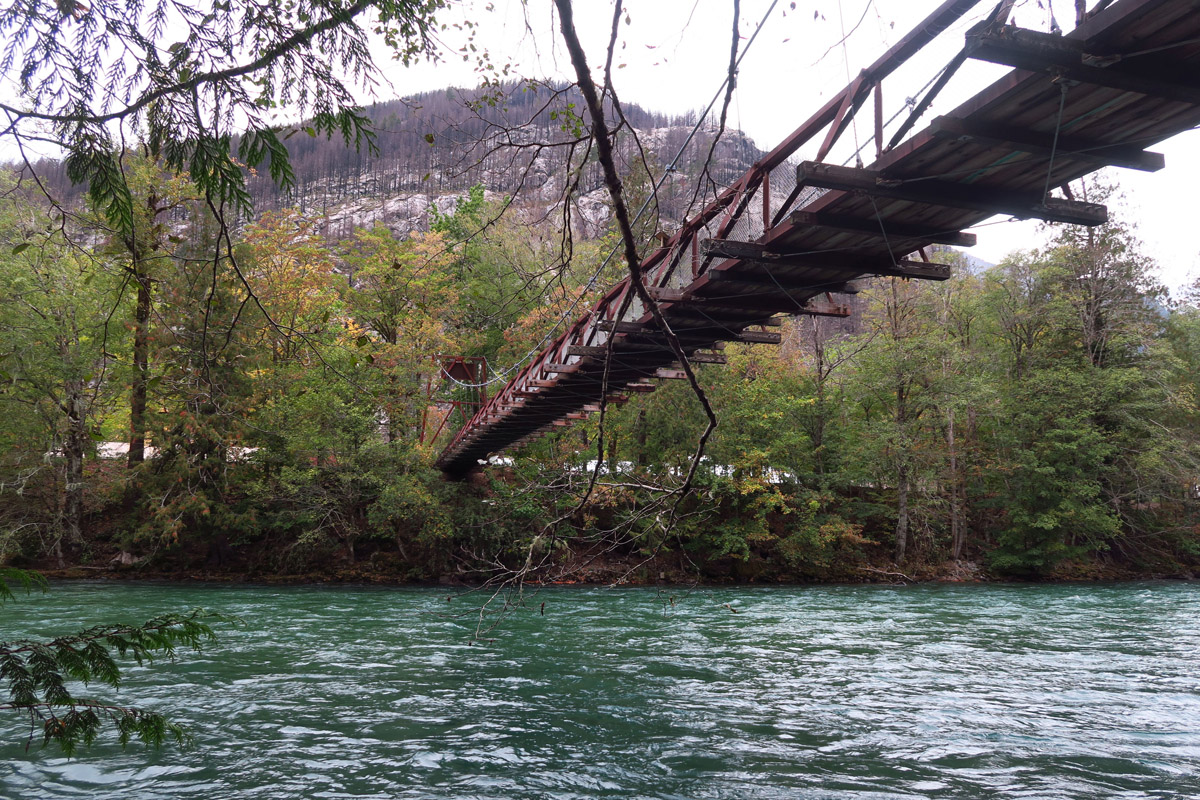 I spent a good bit of time in North Cascades last time I was in the PNW. I did some great hikes, took in all the exhibits at the Visitor Center, and visited the Seattle City of Light exhibits. But turns out, I missed the best part. Thanks to a tip from fellow full-timer Laurelee, I learned about the incredibly scenic Cascades River Road. I knew the road would be steep and rough, which I typically hate to do to the little Tracker, but Laurelee assured me the drive would be worth it. However, I started to have doubts after asking the woman at the Shell station in town for directions and conditions of the 23 mile road. “It’s just a long road with a bunch of trees. No view until the very top.” Good thing we didn’t let this discourage us! 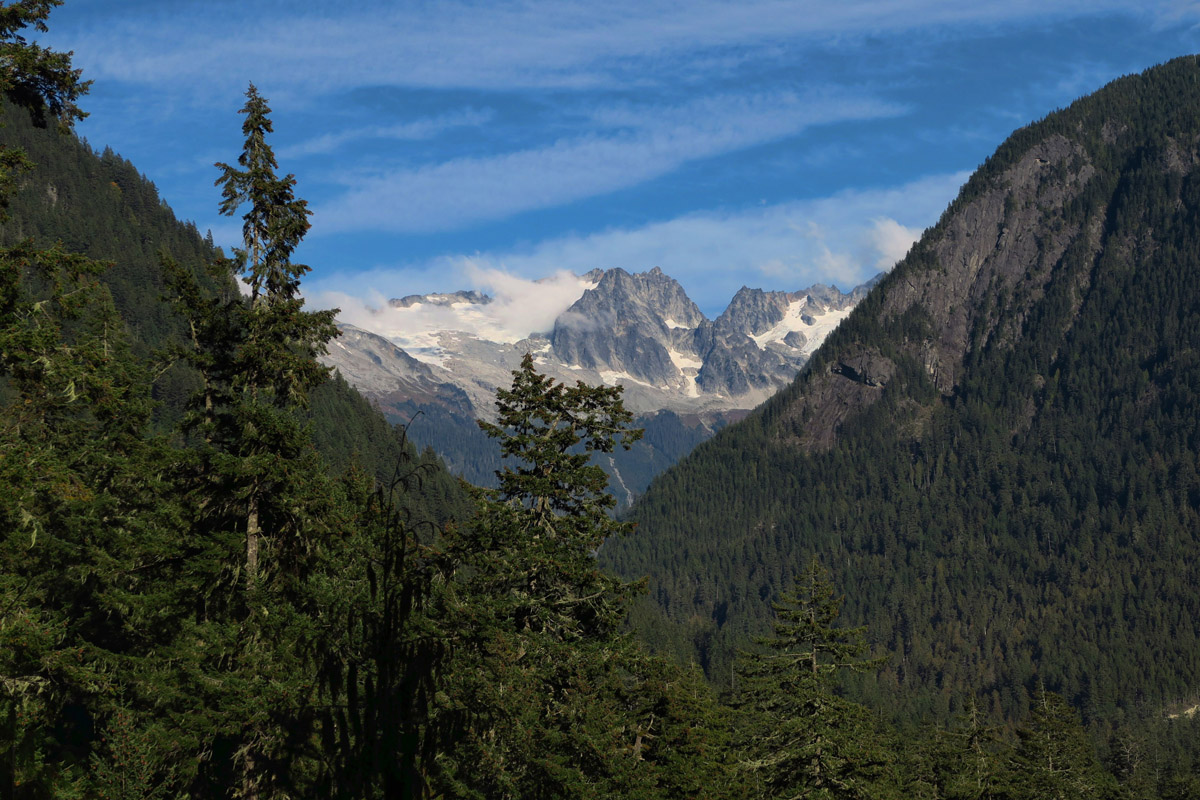 First glimpse of what’s to come from Cascades River Road. 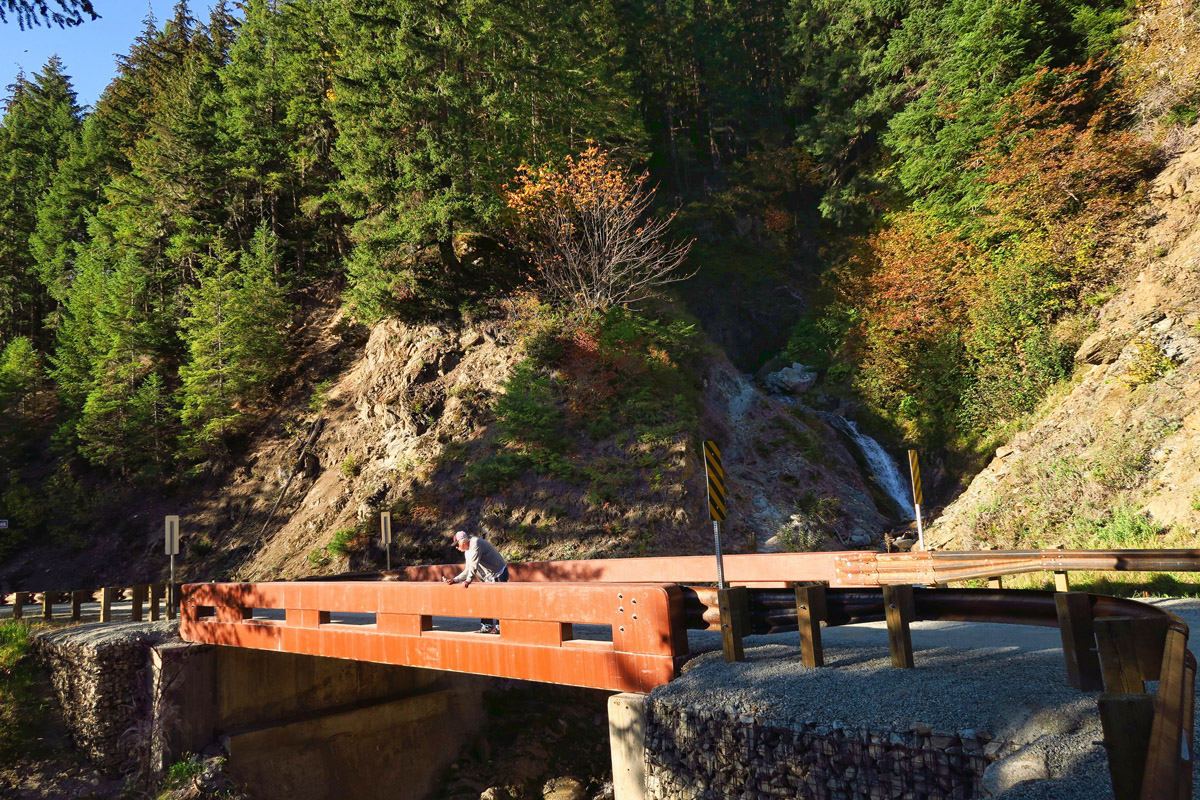 Many photogenic spots along the road… 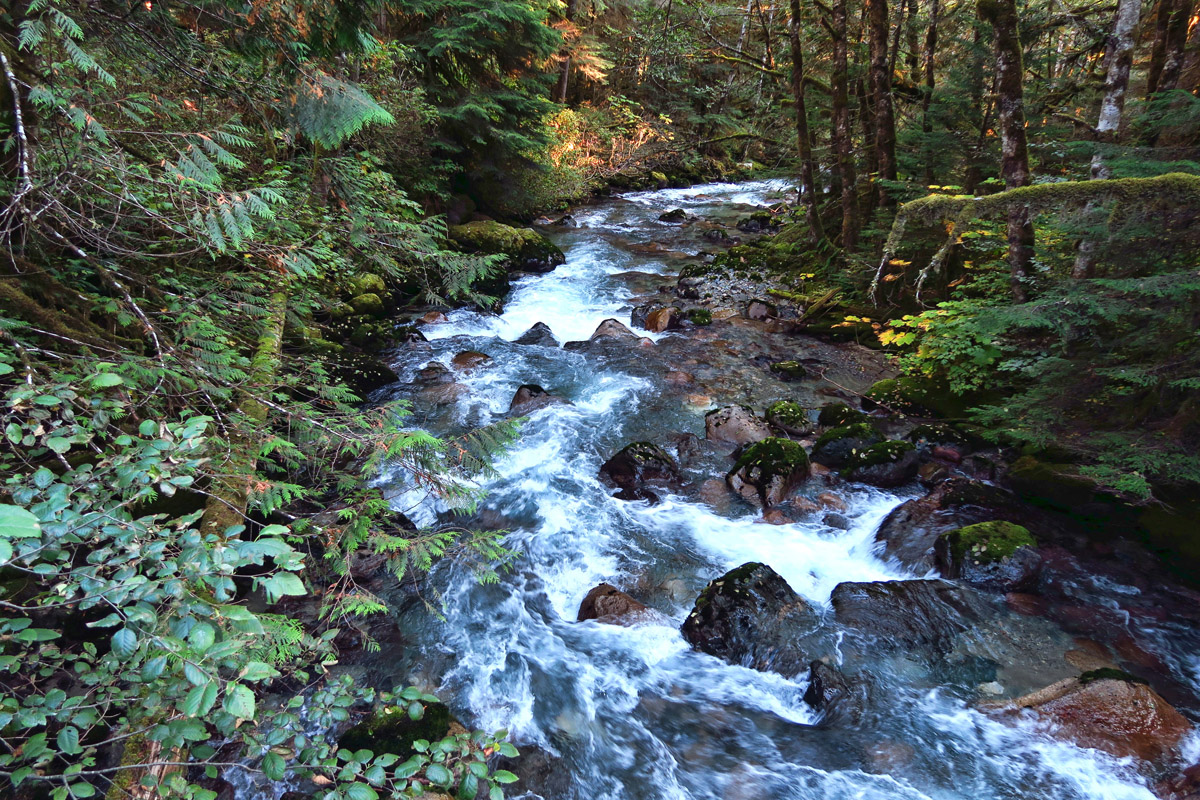 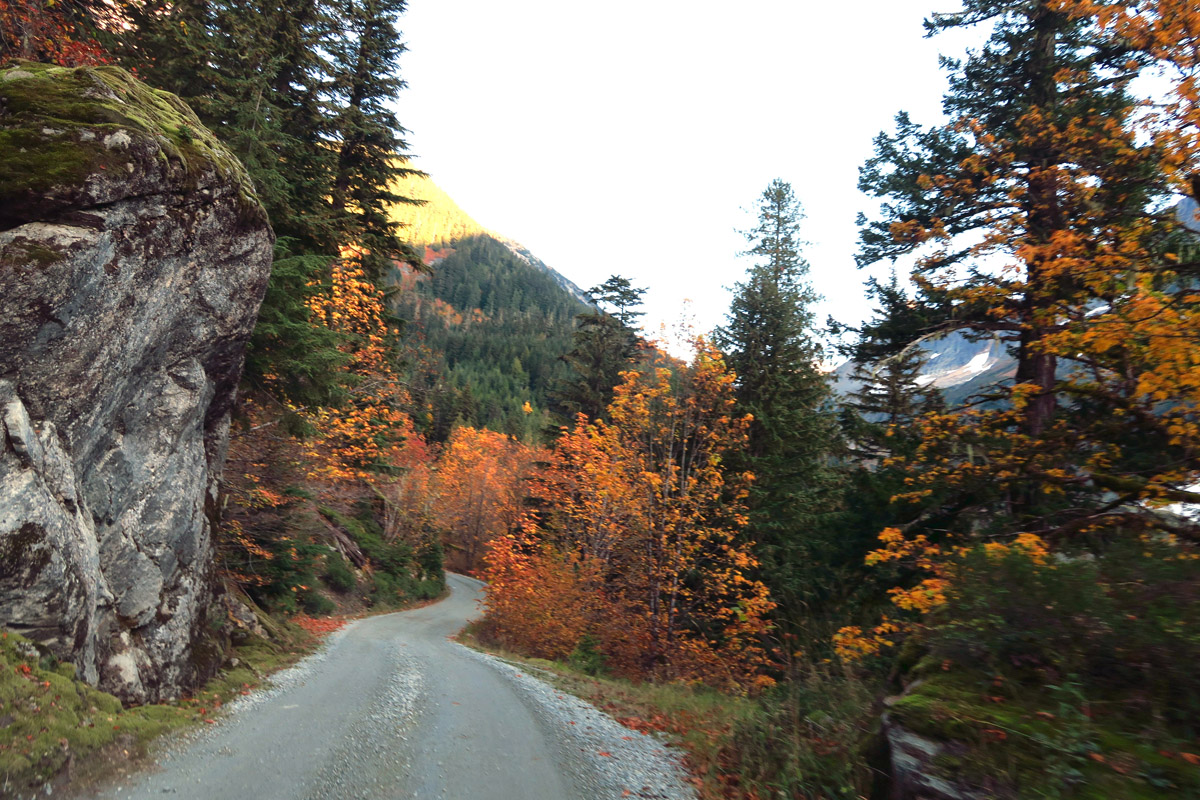 The road is paved for the first third. But then for the second third, it turns into the worst washboard road I have ever been on before, and I have been on a lot of farm roads! The vibration was so extreme that at times we were vibrating sideways rather than forward! And the final third is quite steep. My apologies to the little Tracker, but he took it like a champ! 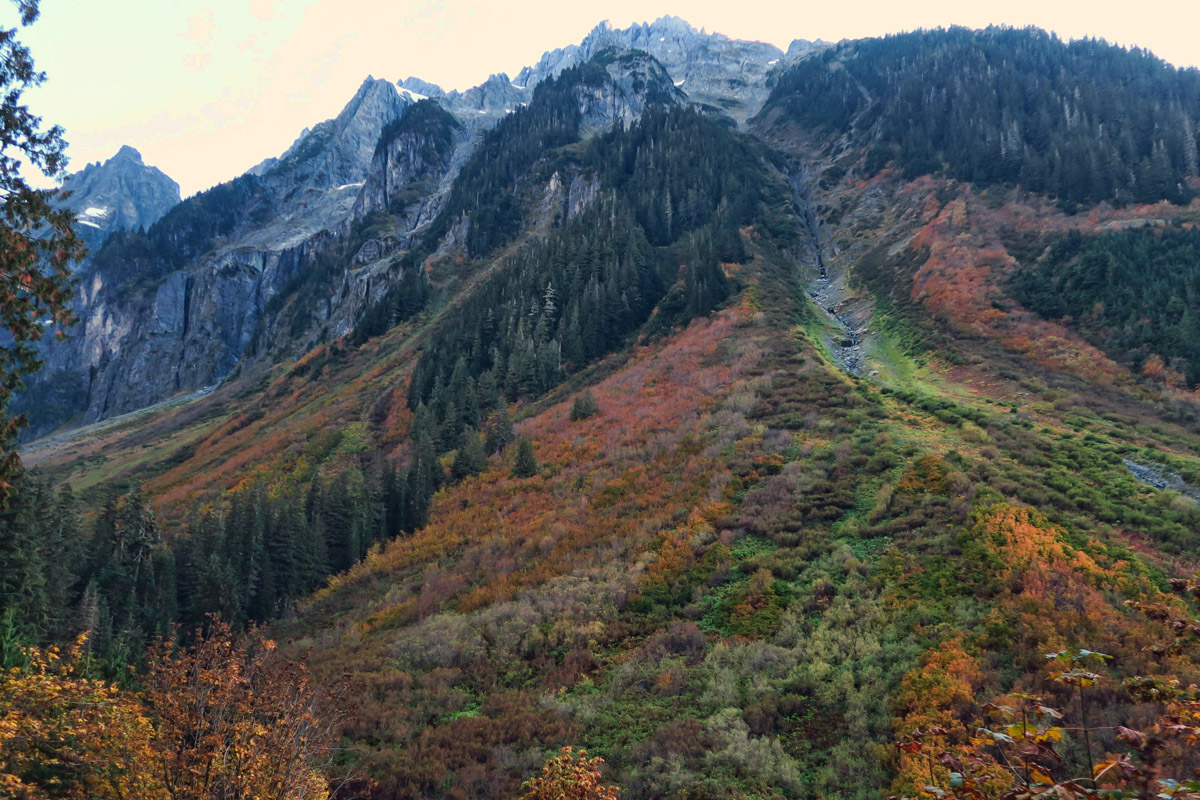 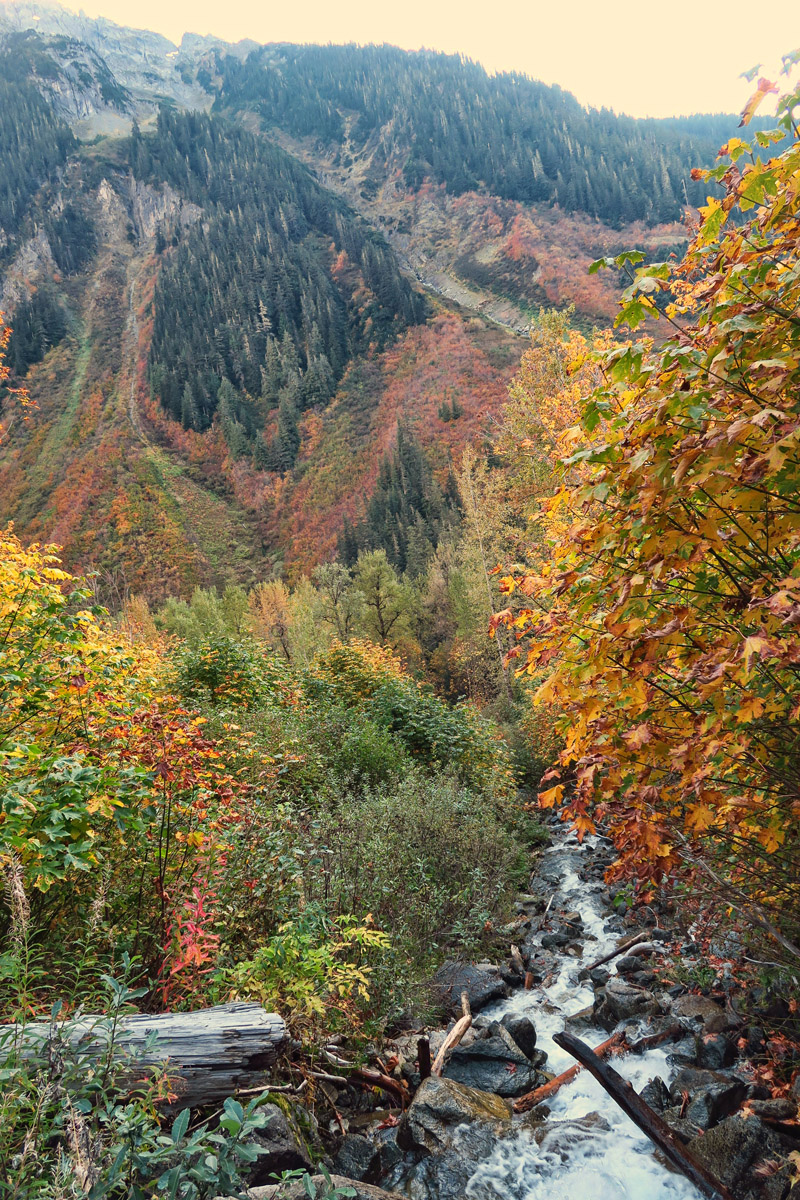 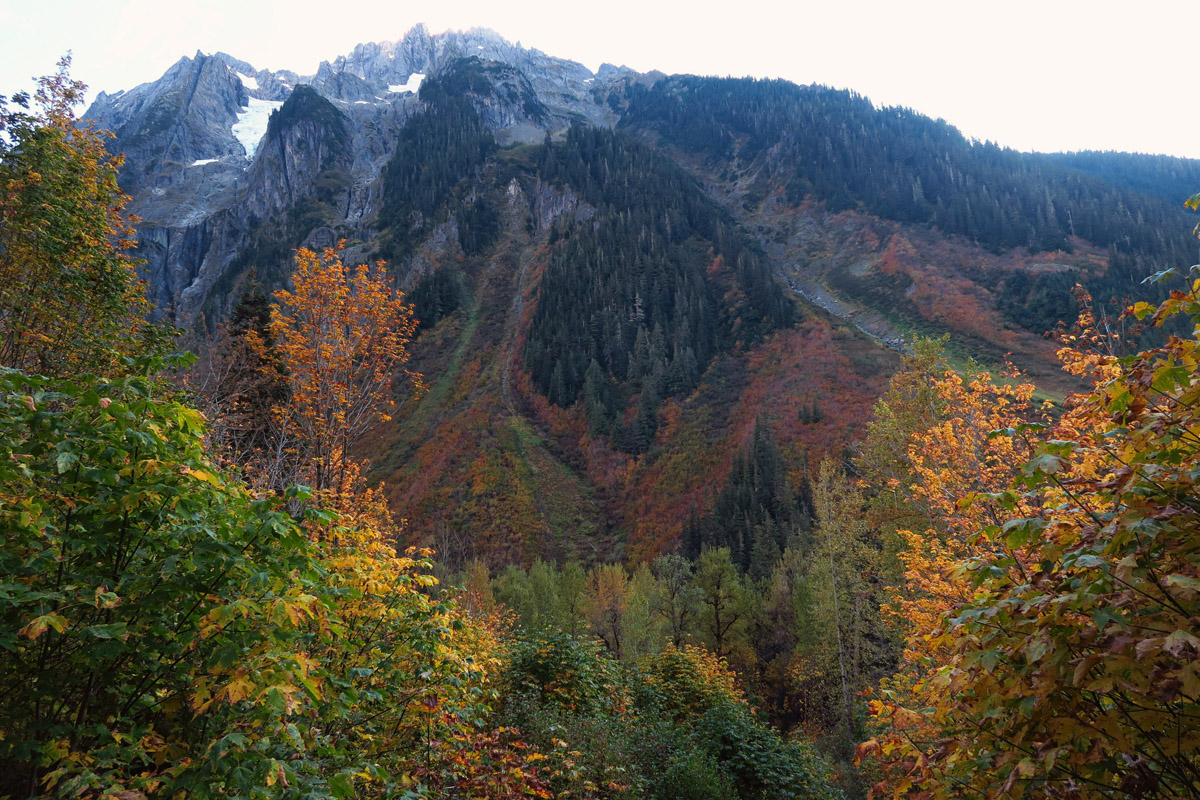 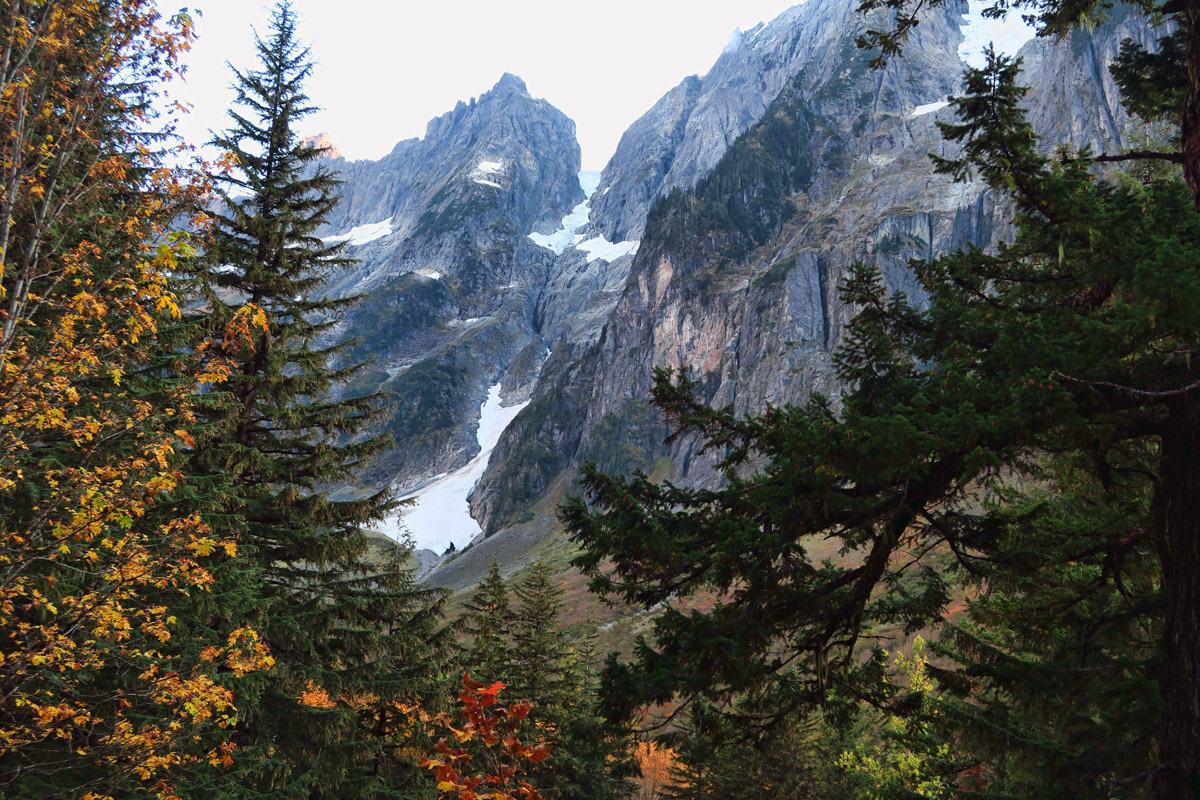 The drive was spectacular! We stopped frequently on the way up, as there was an abundance of photo opportunities, not only of mountains, but of the many “cascades” that give the park its name. There were several lovely Forest Service Campgrounds along the way, but they were all closed for the season. 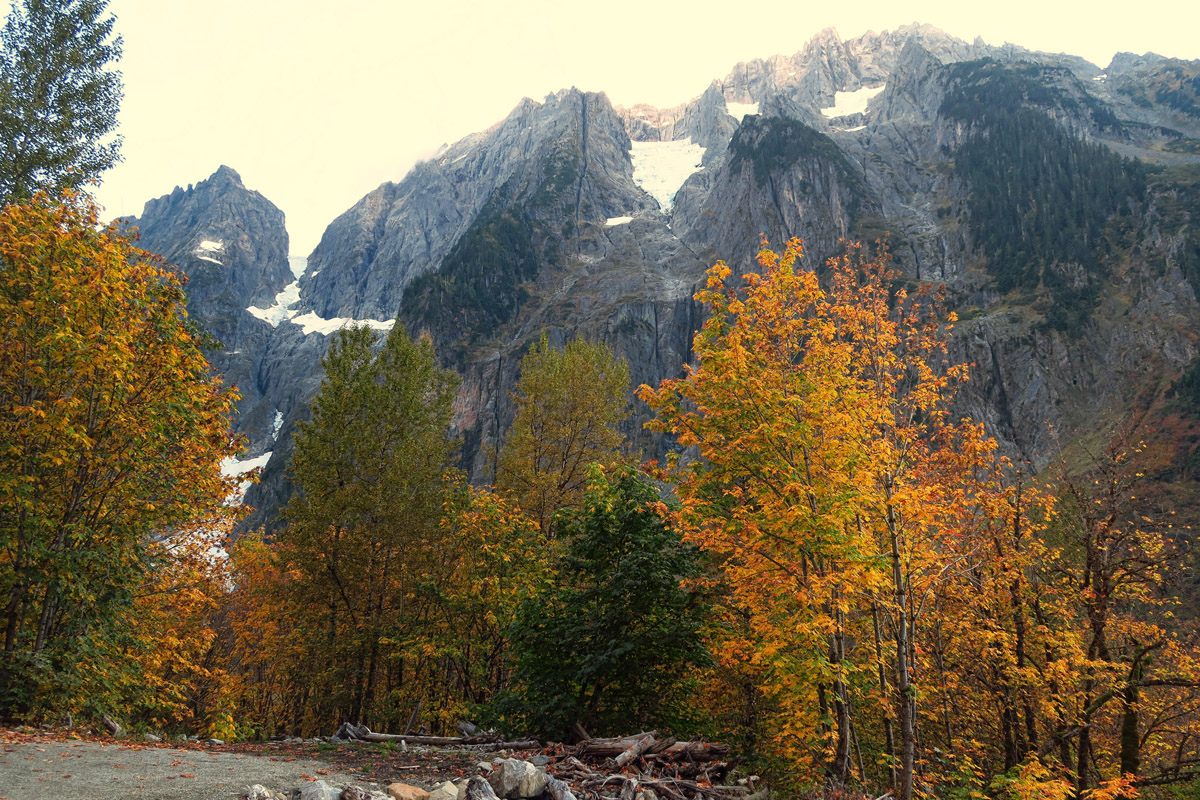 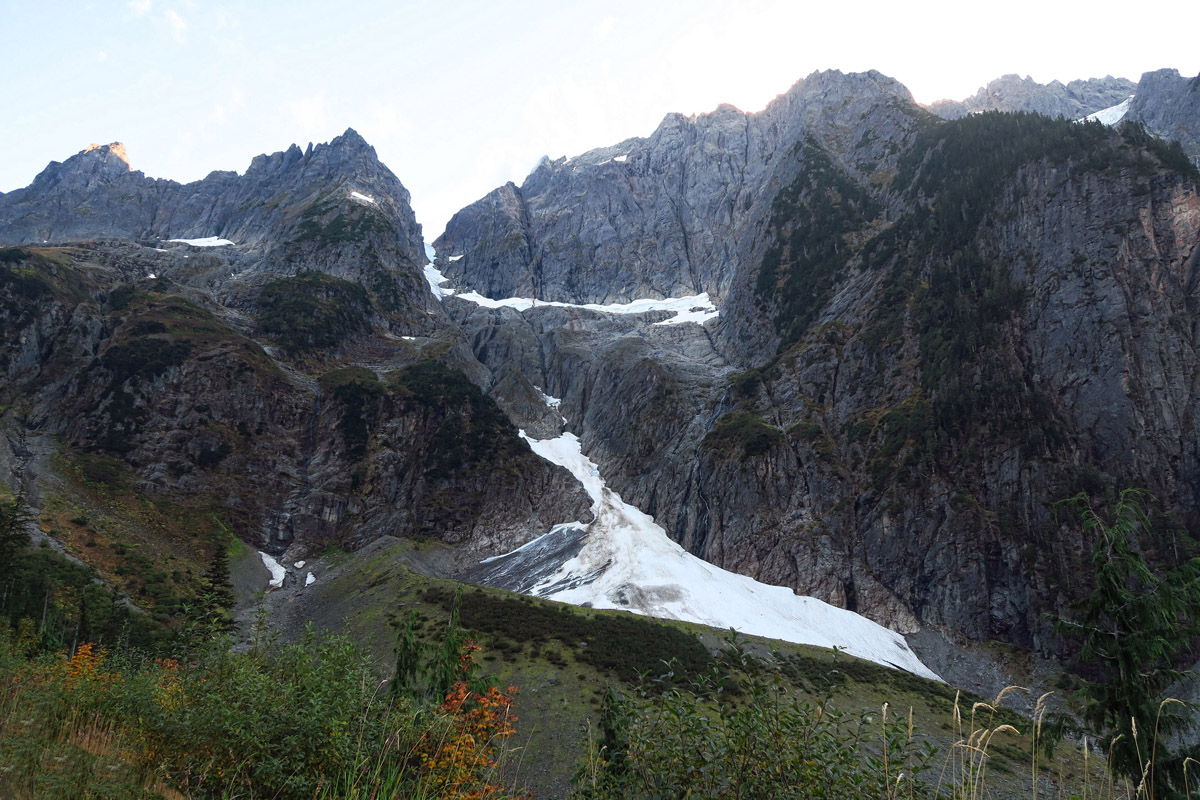 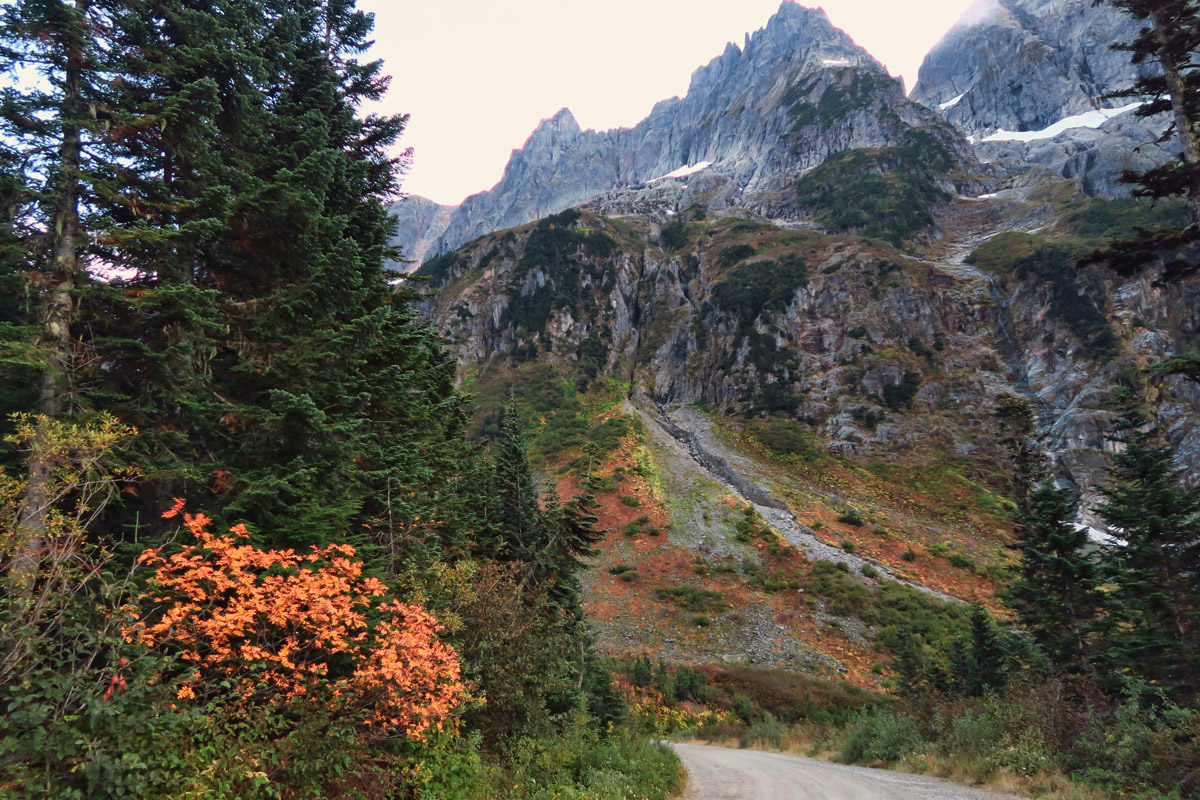 Cascades River Road dead ends at the Cascade Pass trailhead, where it’s 3.7 miles to Cascades Pass, or another 31 miles all the way to Stehekin. Another reason to return to North Cascades National Park one day! 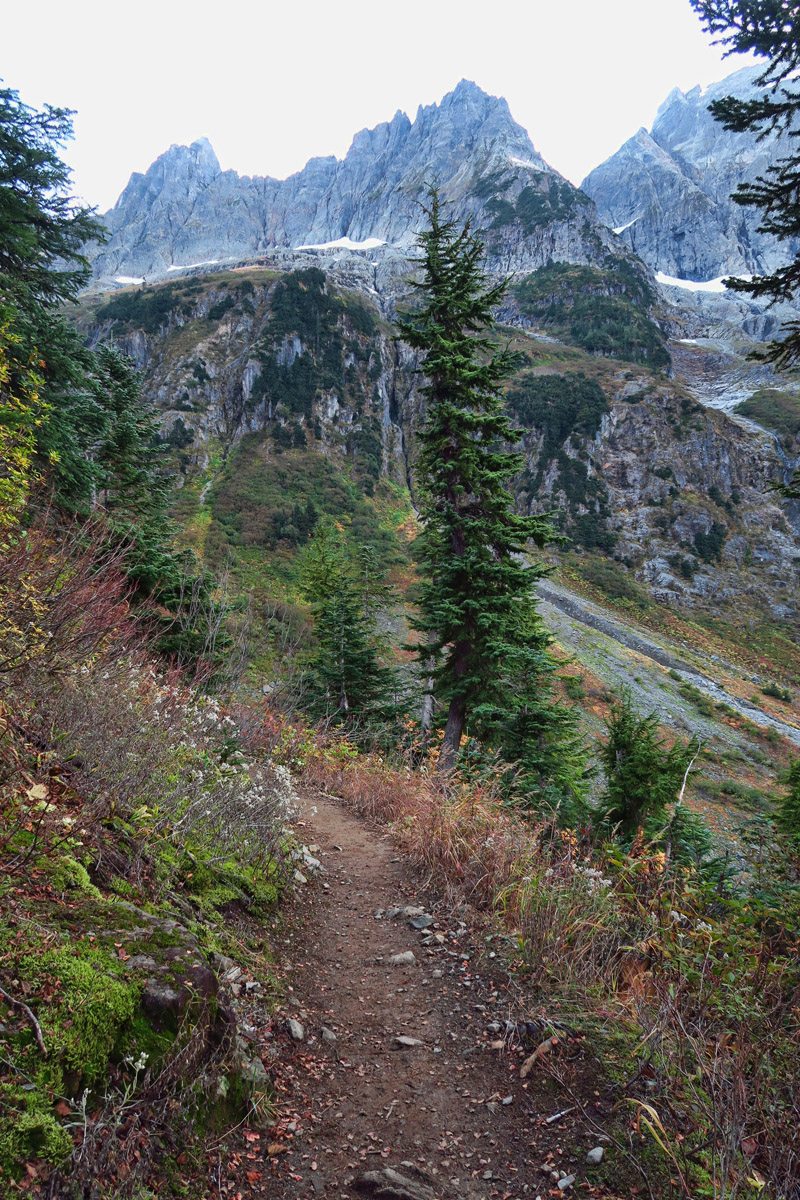 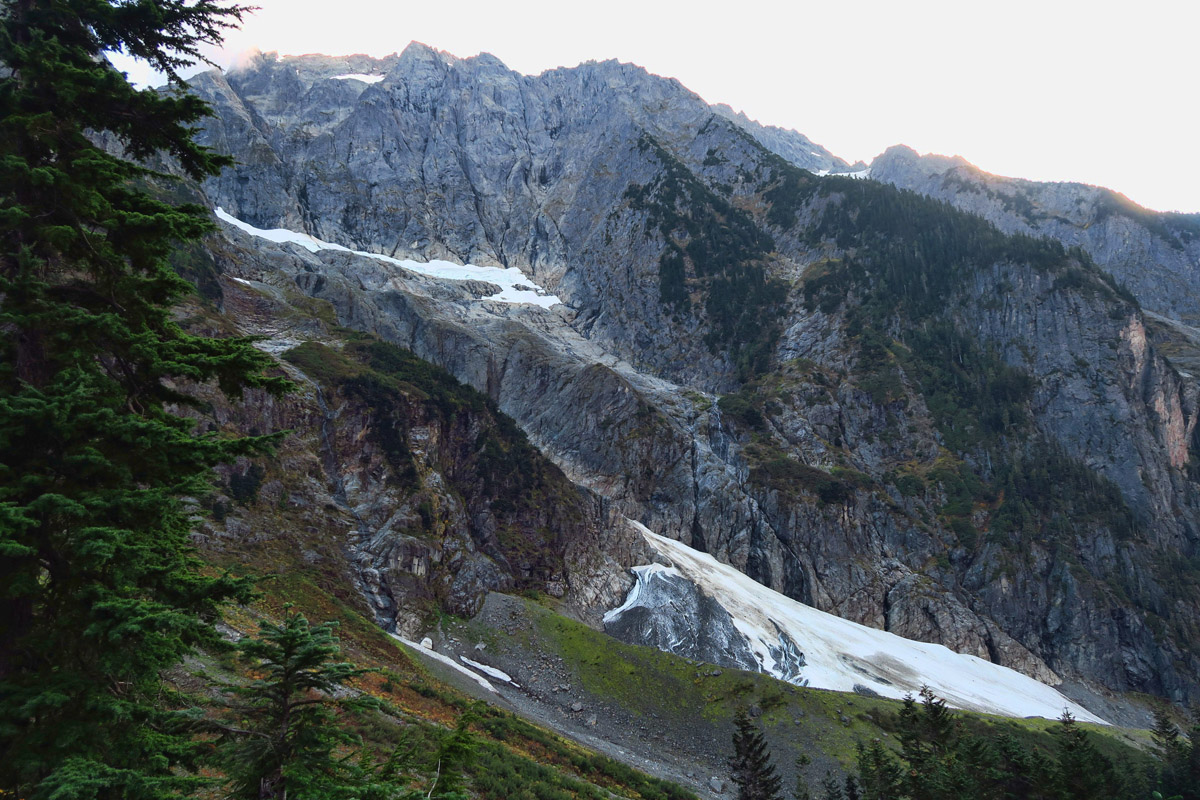 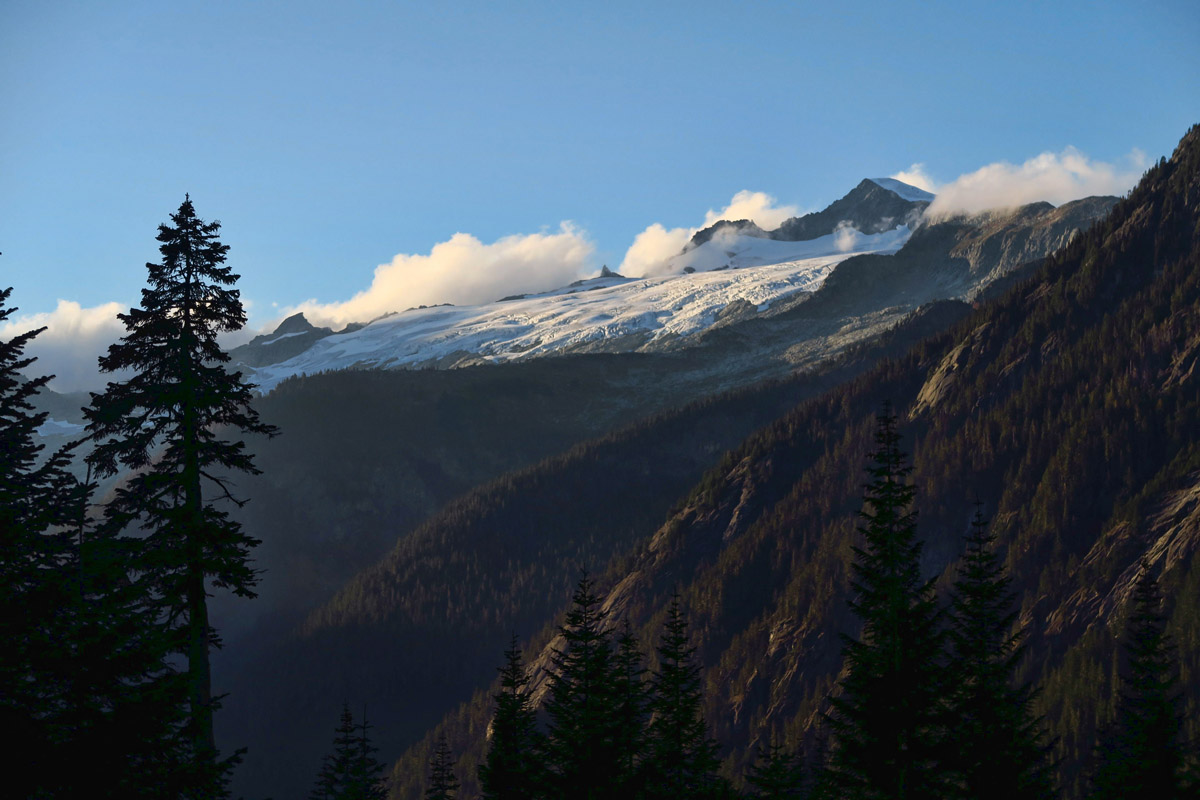 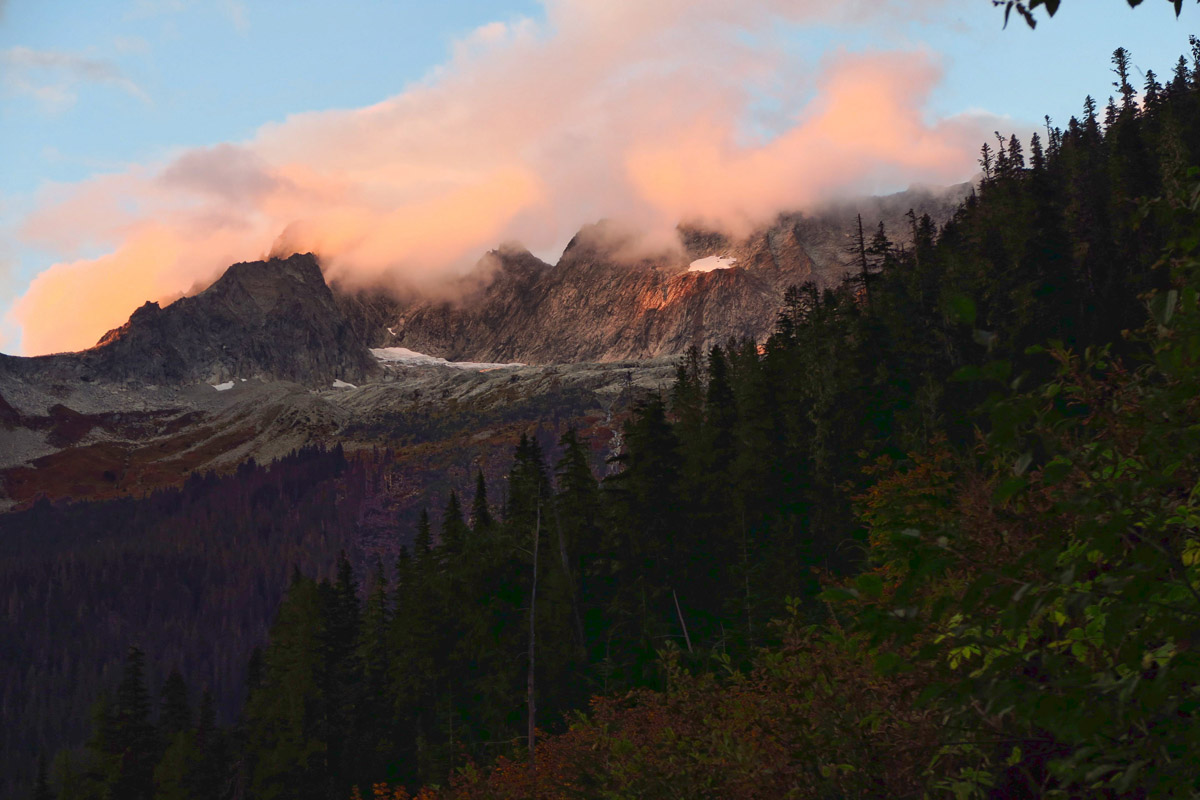