Ten years ago, while vacationing on a tiny island off the coast of Belize, Tobacco Caye, I met a man who waxed poetic about Idaho’s Salmon River.  I can still remember his vivid descriptions of rafting this wild and scenic river through canyons, rapids, and some of the largest wilderness in our country.    He talked of pristine white sand beach camping under star-filled skies, and not seeing another person for miles at a time. His tales were so compelling that they stuck with me. 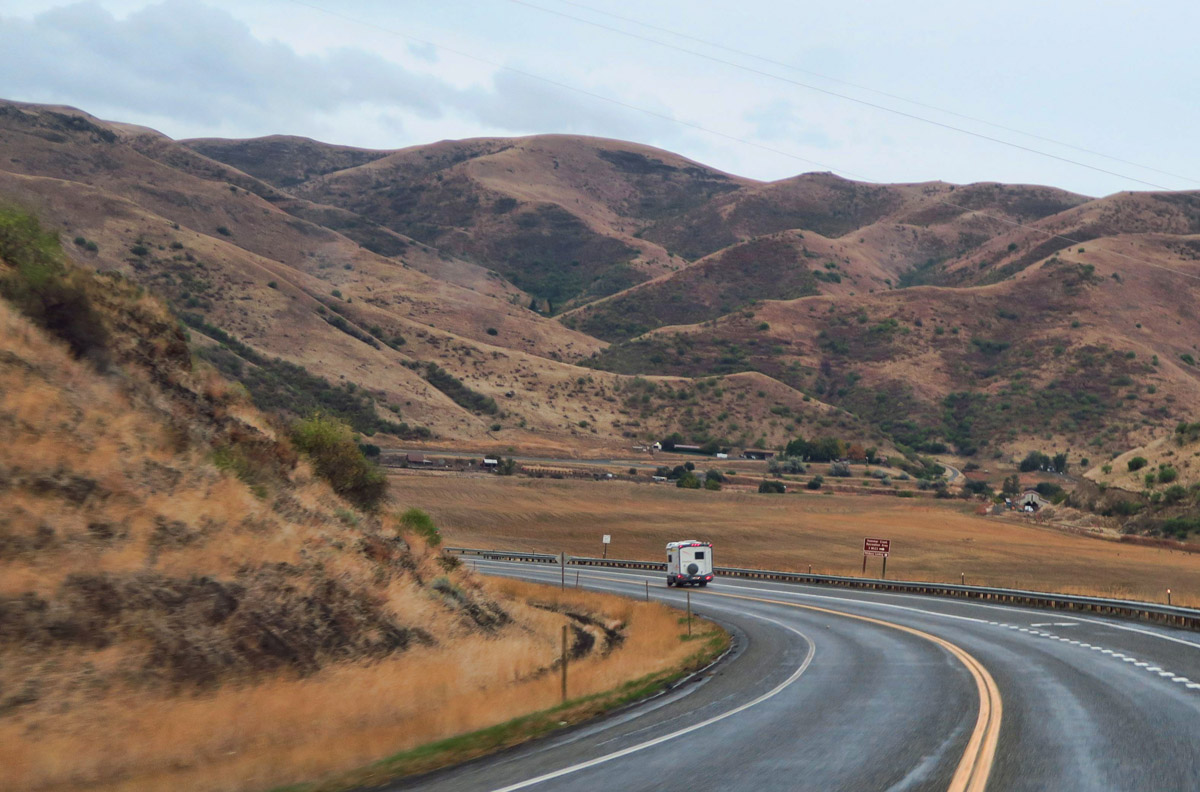 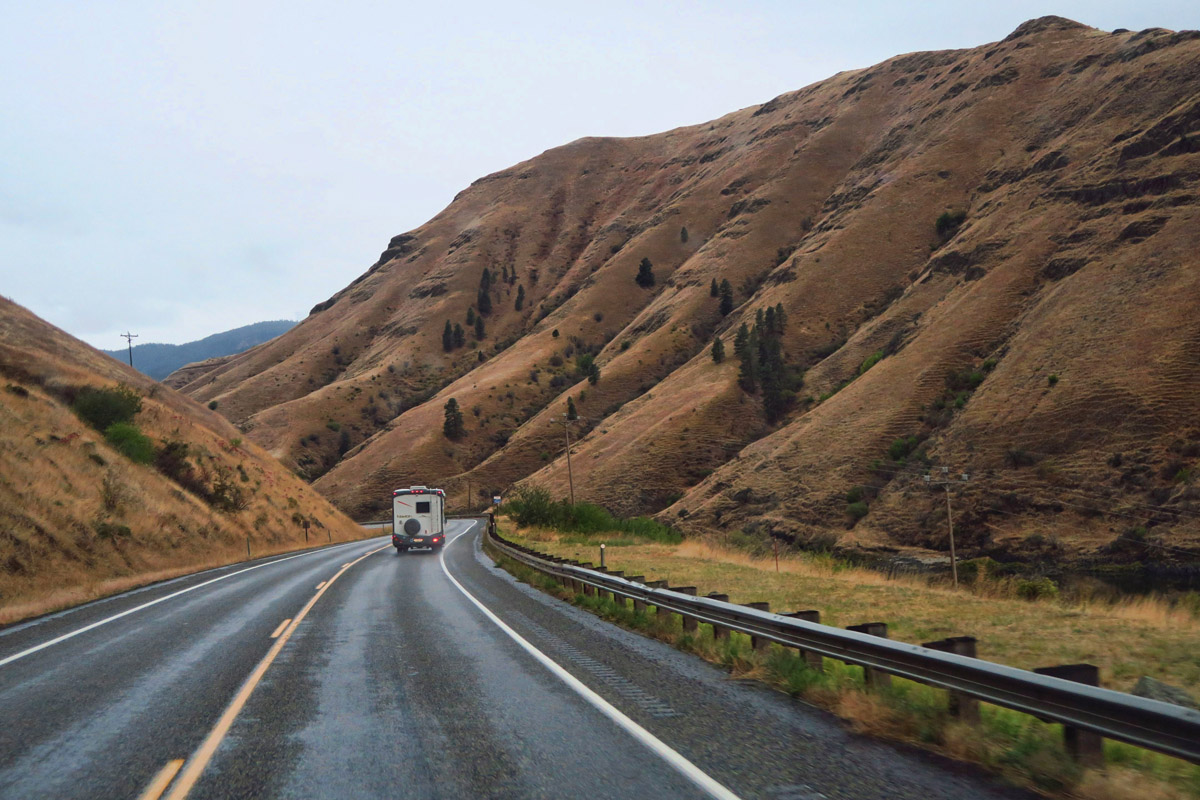 These hills look like they are covered in antler velvet. 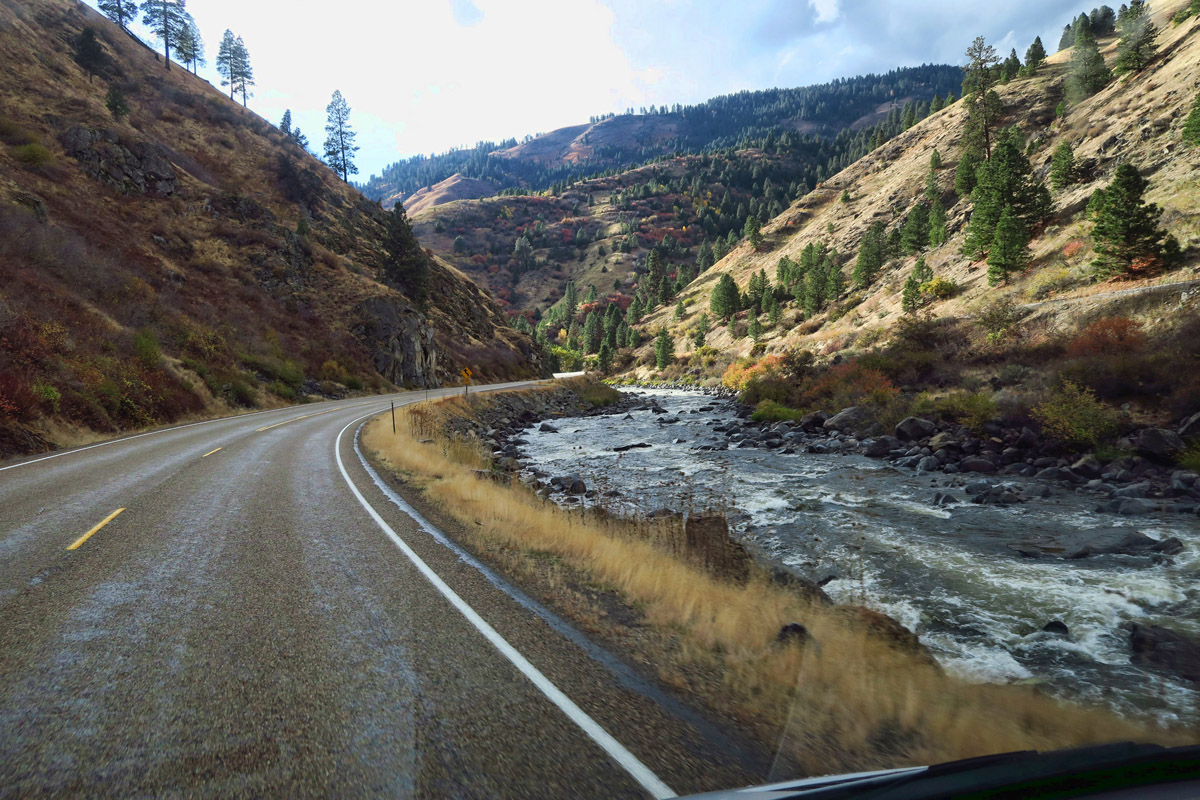 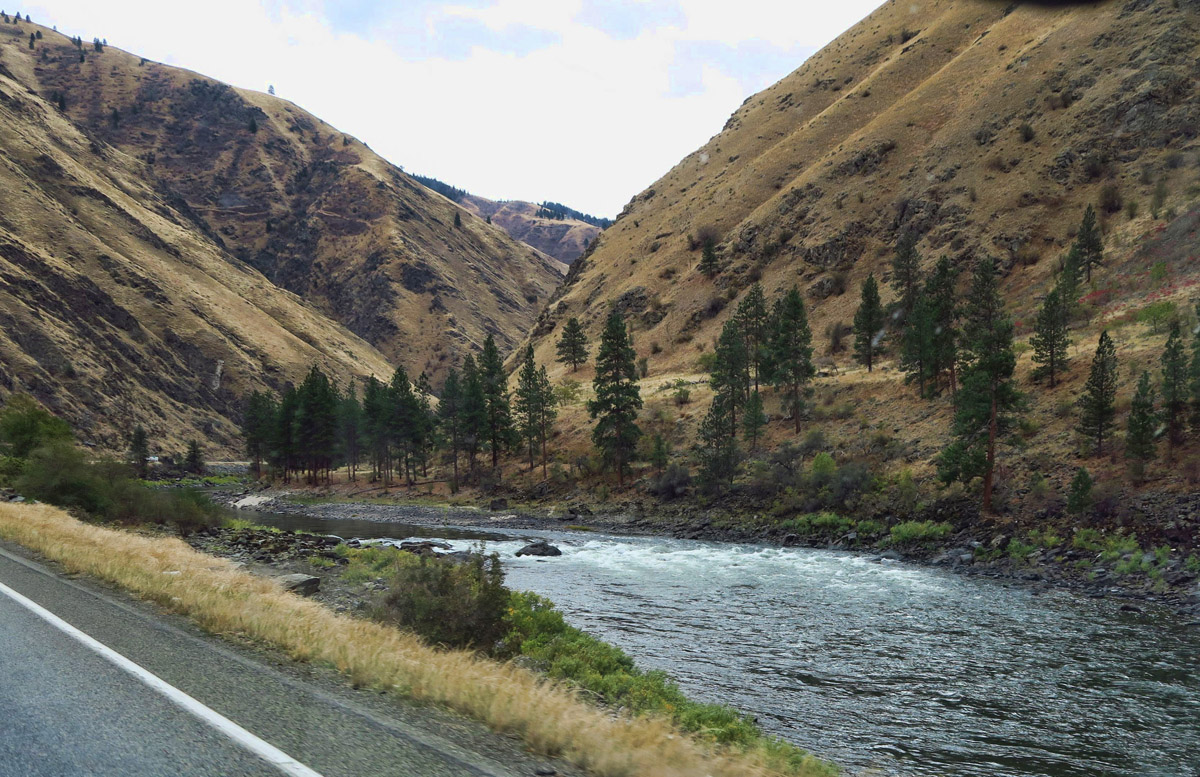 Known as the “River of No Return,” the Salmon River cuts through half of Idaho where no roads travel, therefore offering no option but a one way journey.  Originating in the Sawtooth Mountains near Galena Summit, the Salmon River runs over 400 miles before emptying into the Snake River, traversing a canyon deeper than the Grand Canyon and over two million acres in what is the largest wilderness area in the 48 states. 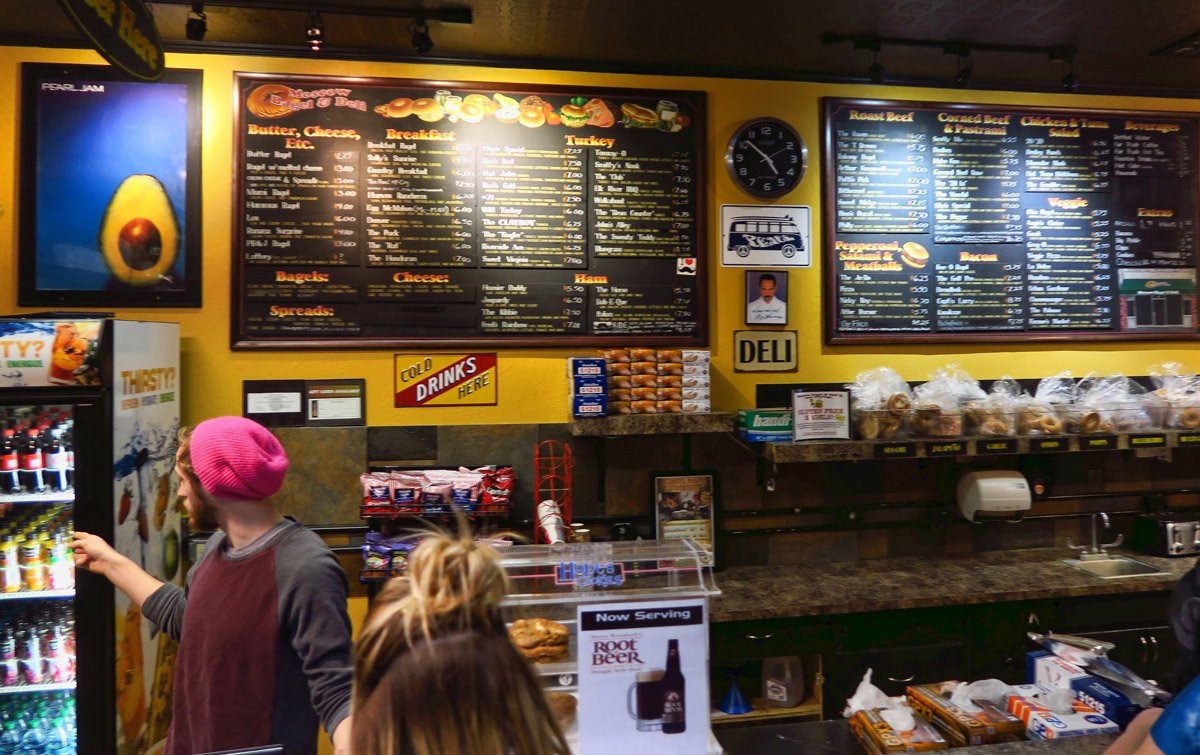 We get some good advice that the Moscow Bagel Shop is a “do not miss” stop along Hwy 95, which runs right through town. I recommend “The Raven.” Best roast beef sandwich ever! 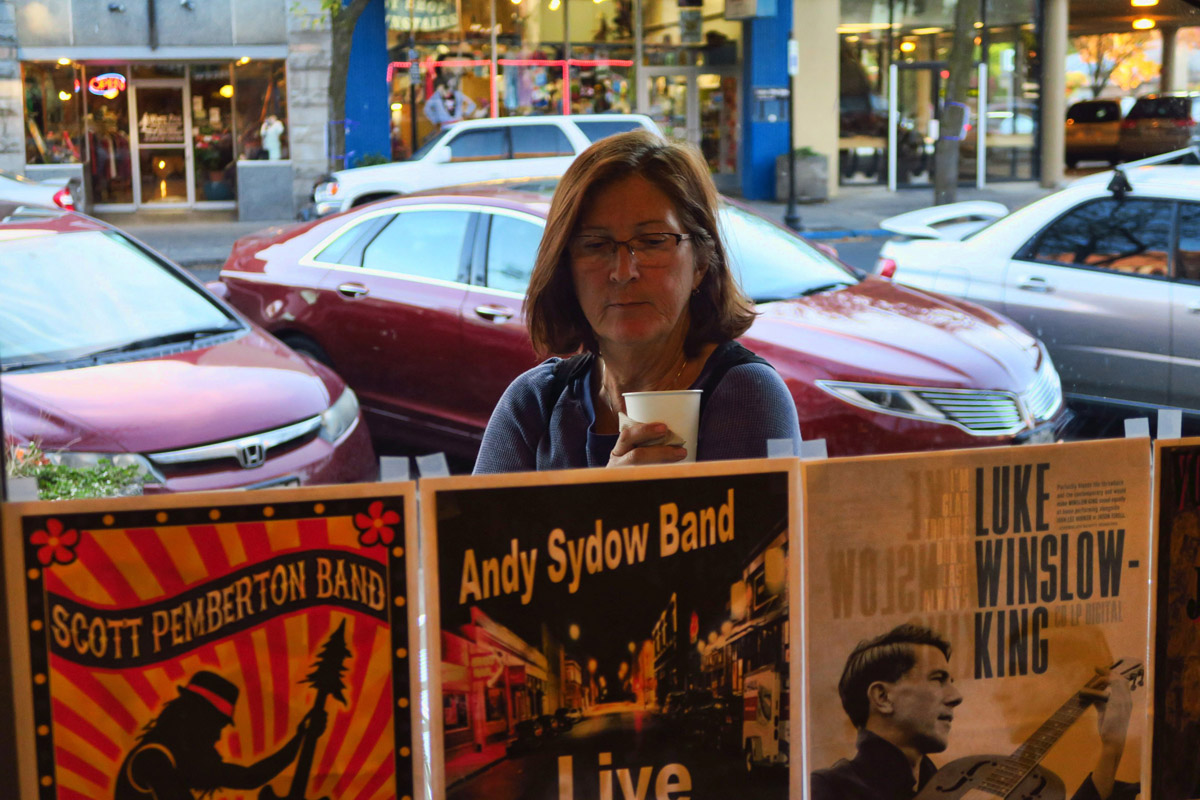 Moscow is home of the University of Idaho. Like all college towns, there is a lot going on musically. 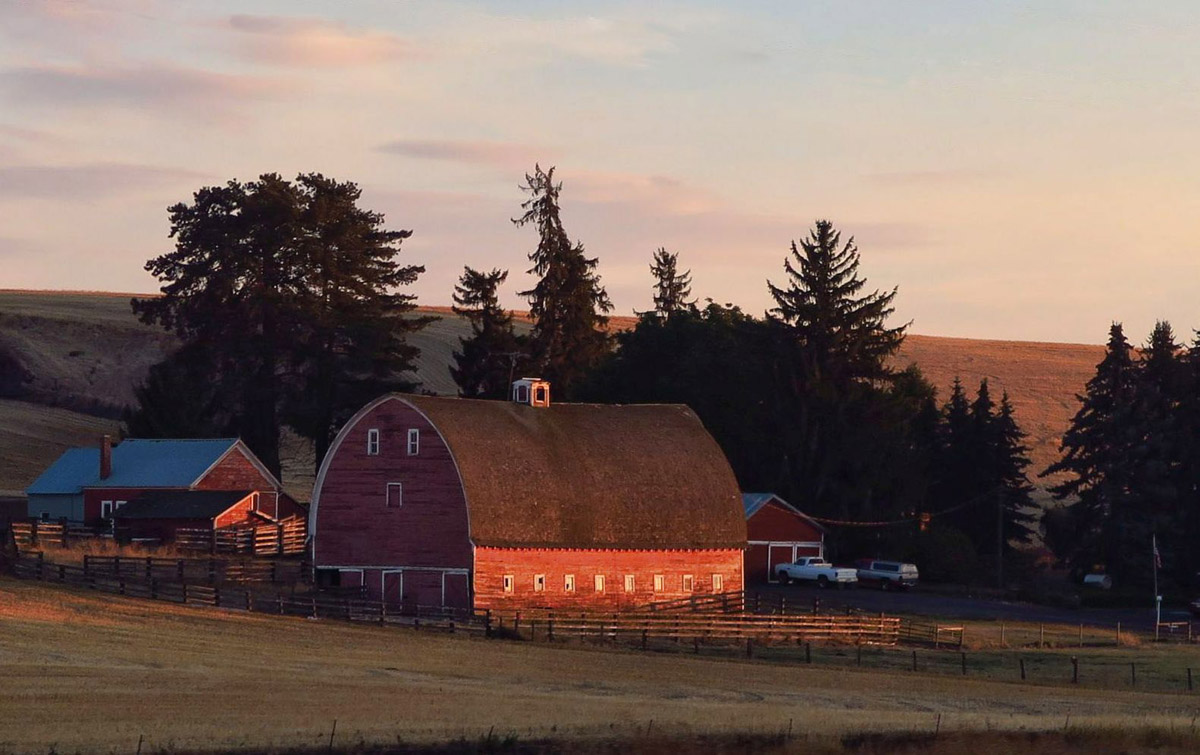 Idaho also has a lot of picturesque barns along the byways. 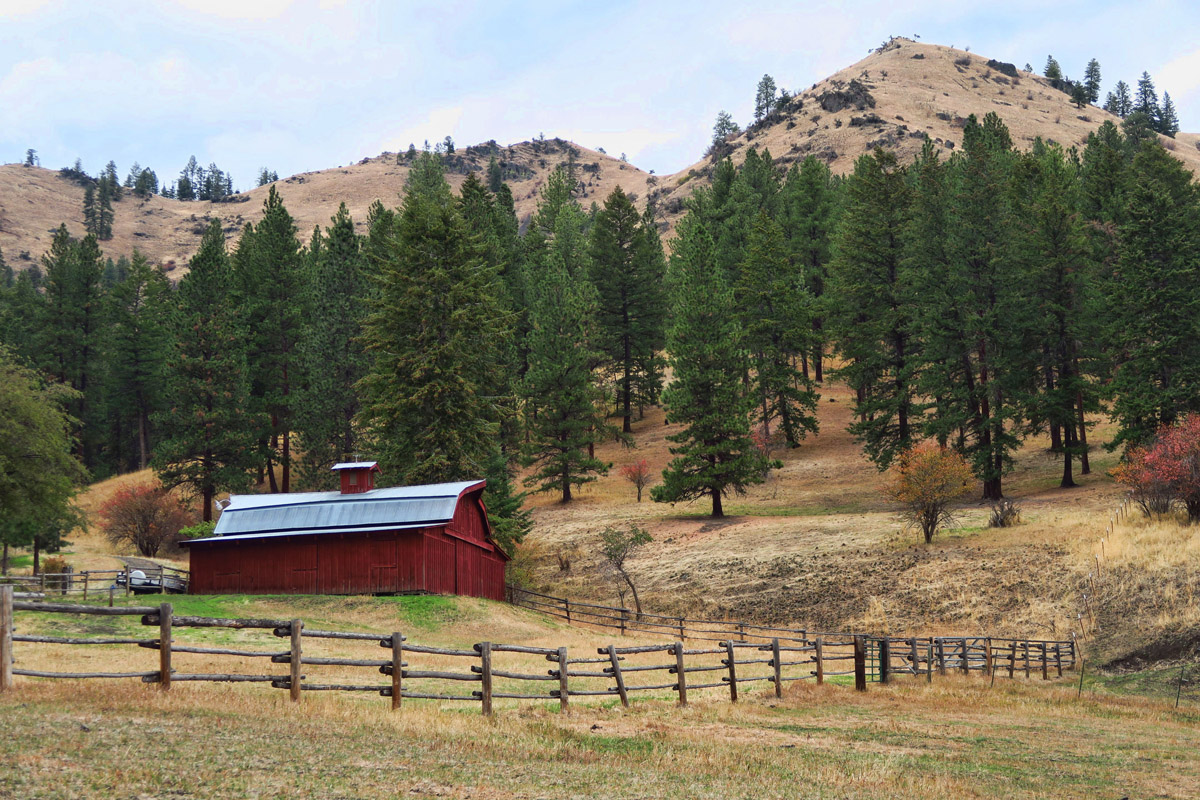 Since that time, I have wanted to follow the Salmon River all the way across Idaho.  I had planned to do this back in 2014, but had to make a sudden turn south when the Tracker engine blew.   So this year, I hoped to fulfill that desire.   Originally, I thought I would do this by float trip, but my continued delays this summer thwarted that plan, as rafting trips ended at the end of August.   Still, I wanted to see the notorious Salmon River.  I asked Don if he was interested.  His response:  “I’m following you!” Yikes! No pressure there! 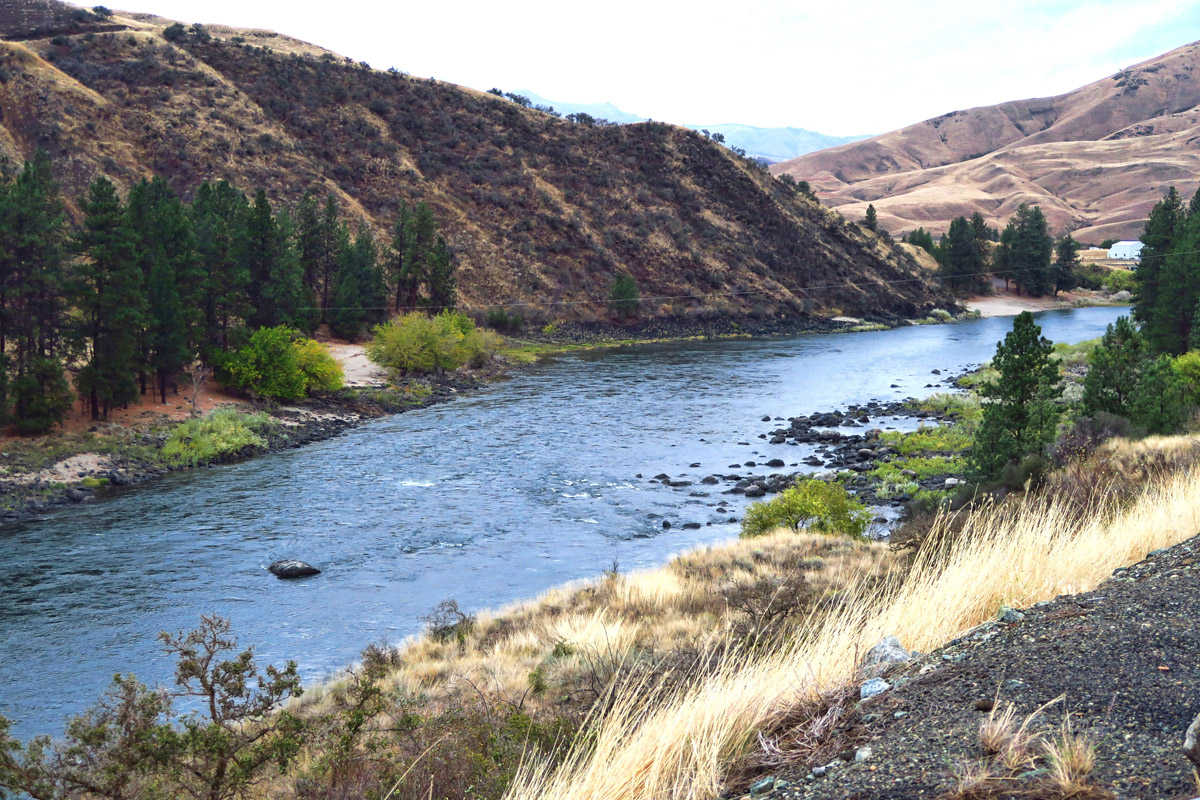 High winds pick up and darkness is looming. We fall short of our planned destination. We need to find a place to park before dark. 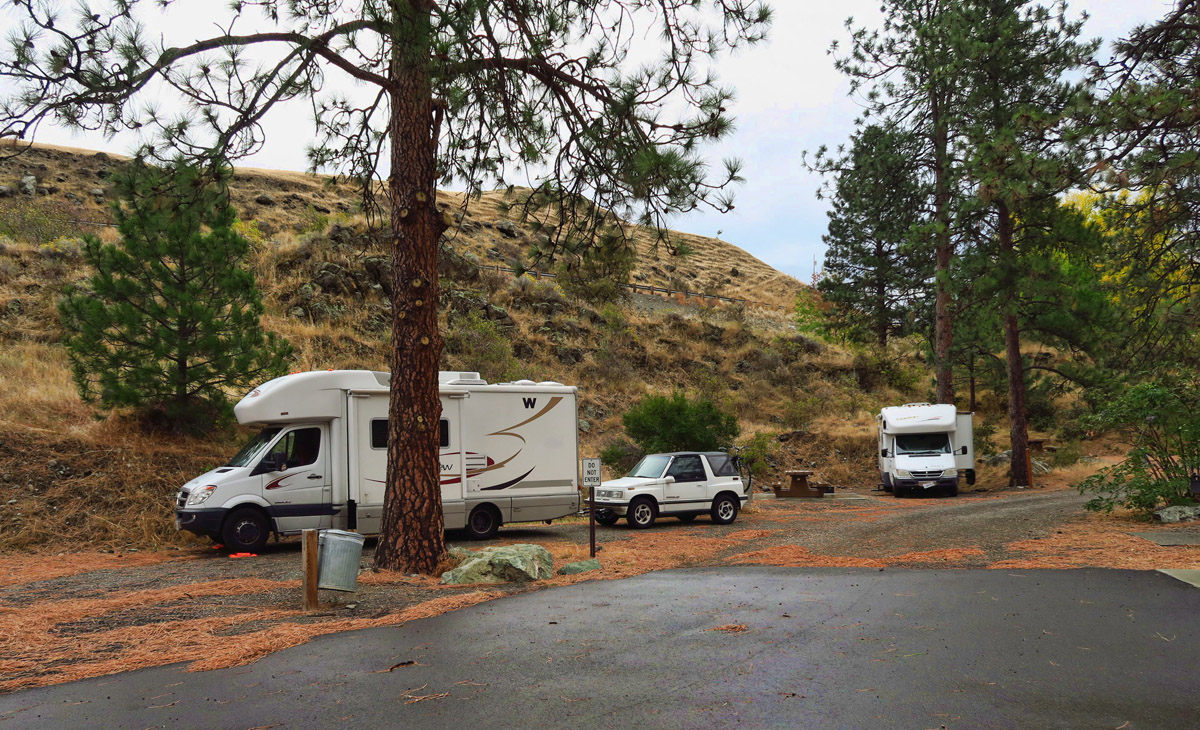 Just as we decide we need to get off the road due to wind, what are the odds, we see a sign for “Slate Creek Rec Area” a campground of only 5 sites along the road. 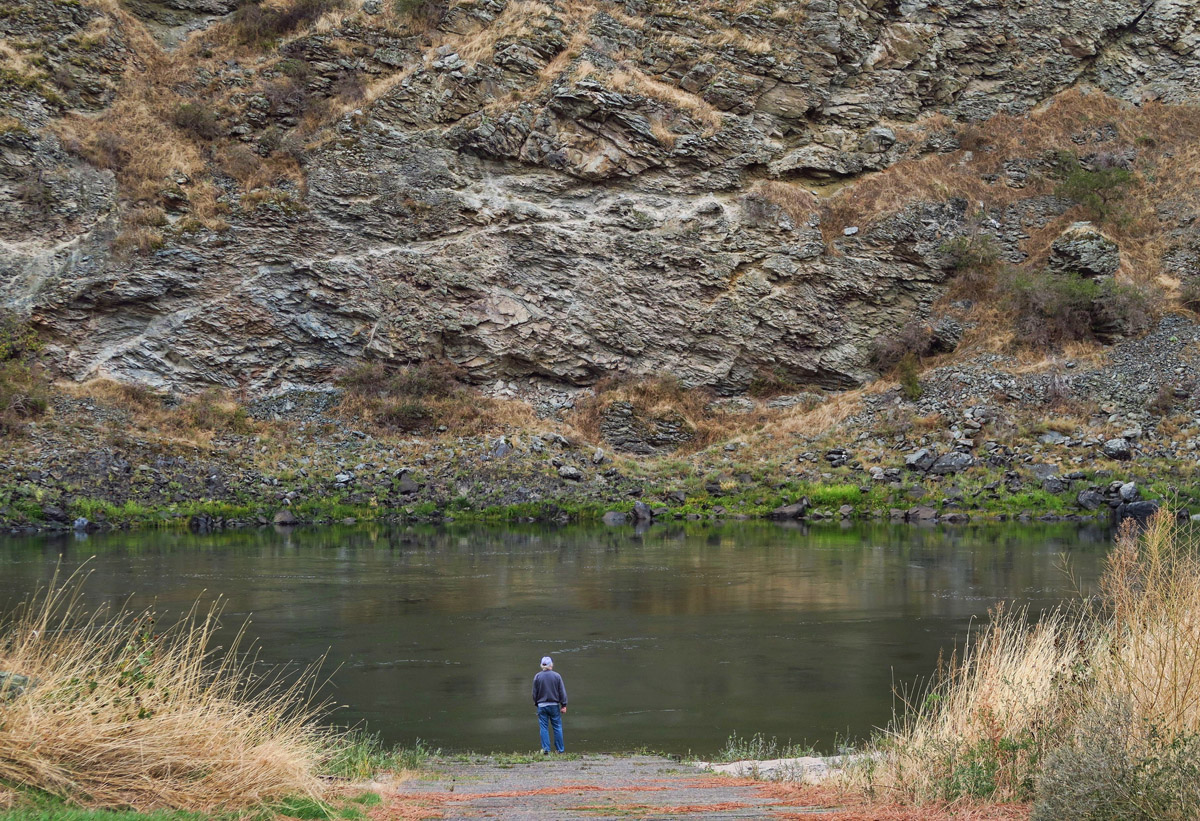 Right on the Lower Salmon River, this BLM campsite, Slate Creek, ends up being one of our favorite camping spots. 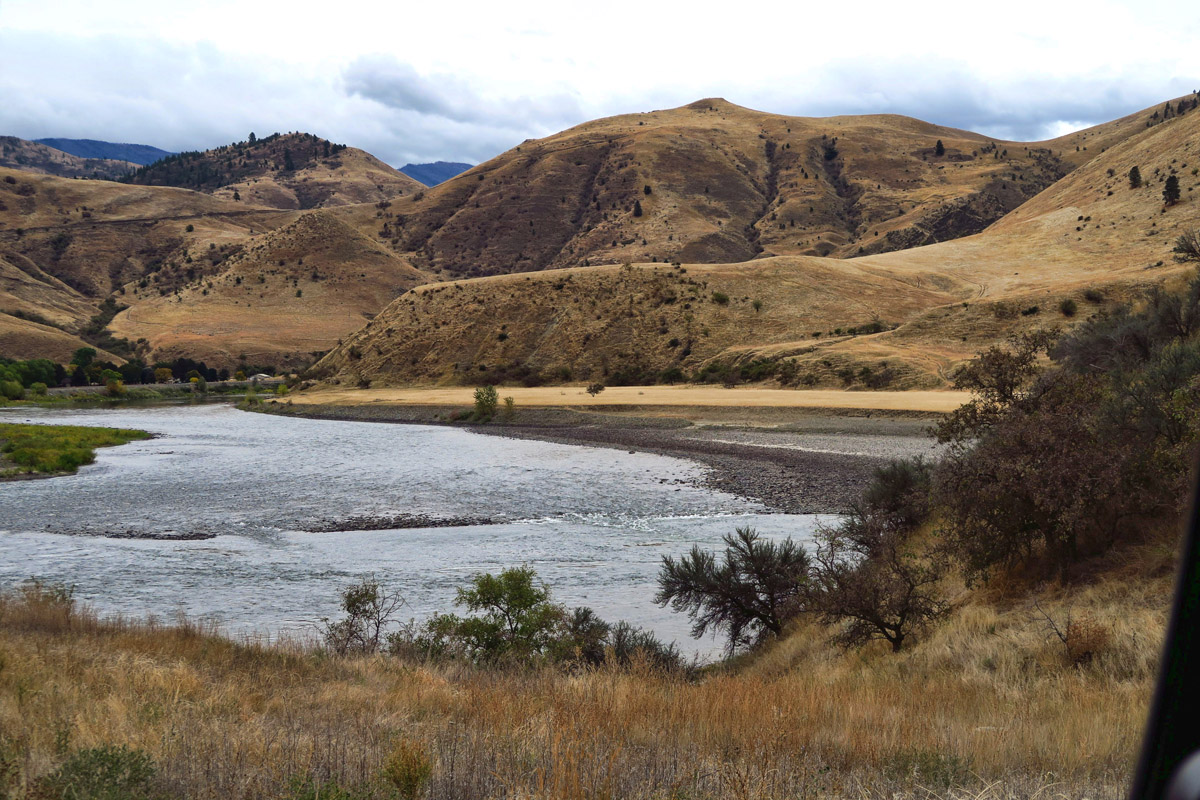 Up to this point, my stops had been well planned out, because I was repeating much of the 2014 itinerary.   But Idaho was new territory for me.  And now getting so late in the season, what little plans I had made such as riding the Hiawatha Bike Trail, where foiled as campgrounds and attractions began closing like a domino effect as we headed south. So this meant “winging it” in most cases. 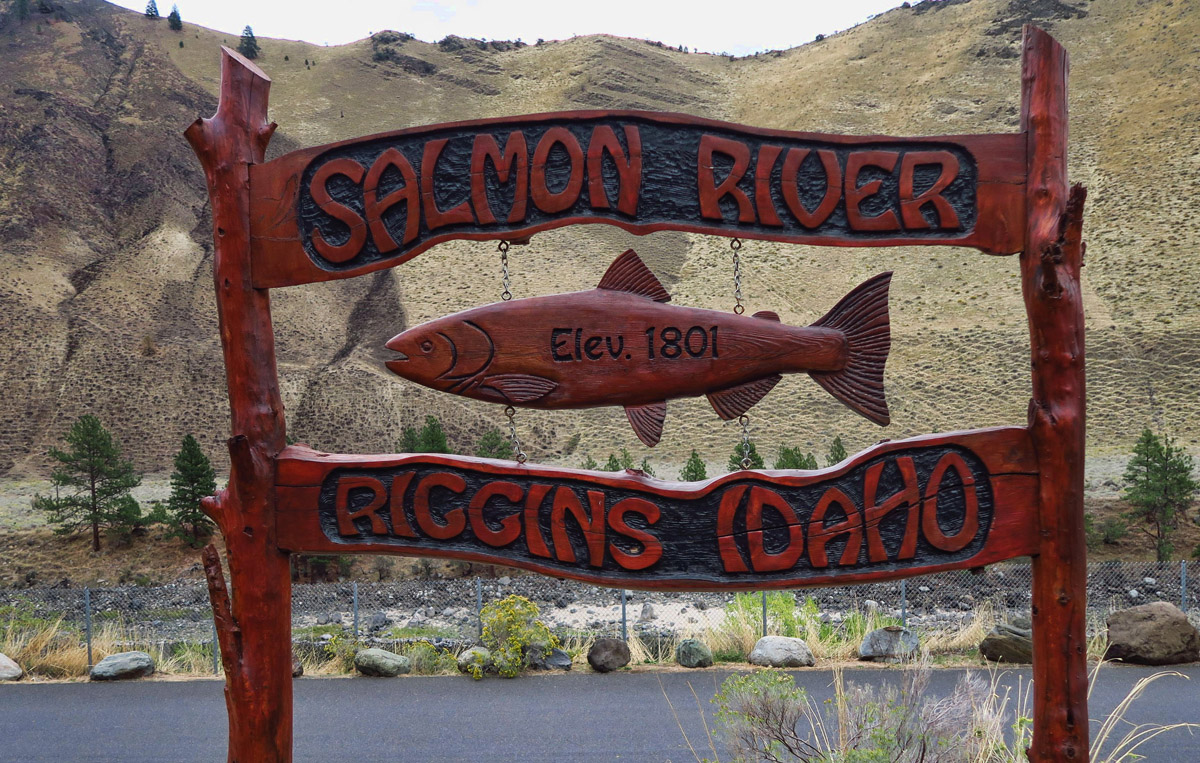 Riggins, Idaho looks like a Cabela’s catalogue, being all about the river. Rafting, fishing, boating, hunting, etc. 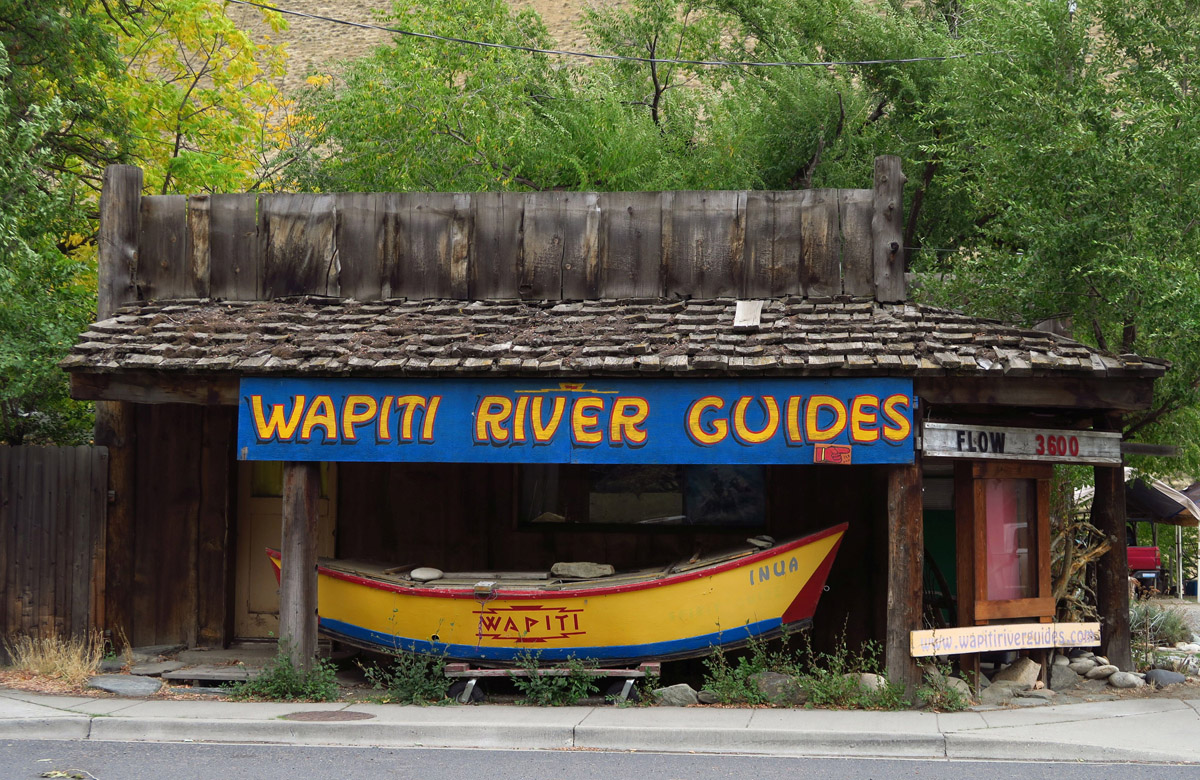 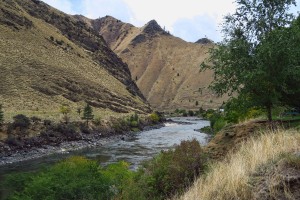 Before we could reach the Salmon River, we would first follow a series of Idaho’s Scenic Byways over to the Snake River, the largest tributary of the Mighty Columbia River, before Intercepting  the Salmon.  We would cross the Washington/Idaho State Line over the Spokane River at Coeur d’Alene, then pick up Highy 95, the “North and South” highway all the way to Lewiston, the confluence of the Snake and Clearwater Rivers.  Lewiston is prime Lewis and Clark territory, with the town across the Snake River from Lewiston being named “Clarkston.” 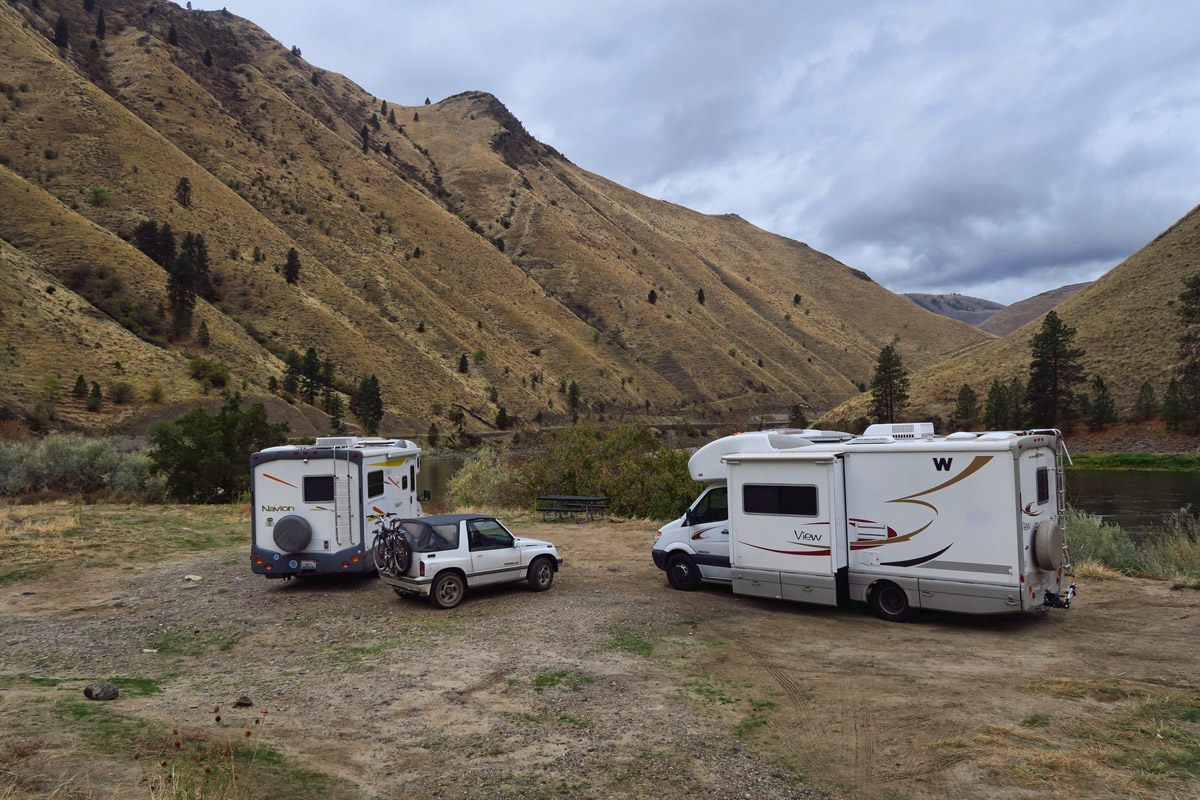 Our boondocking spot, Shorts Bar, just outside of Riggins, right on the Lower Salmon River. 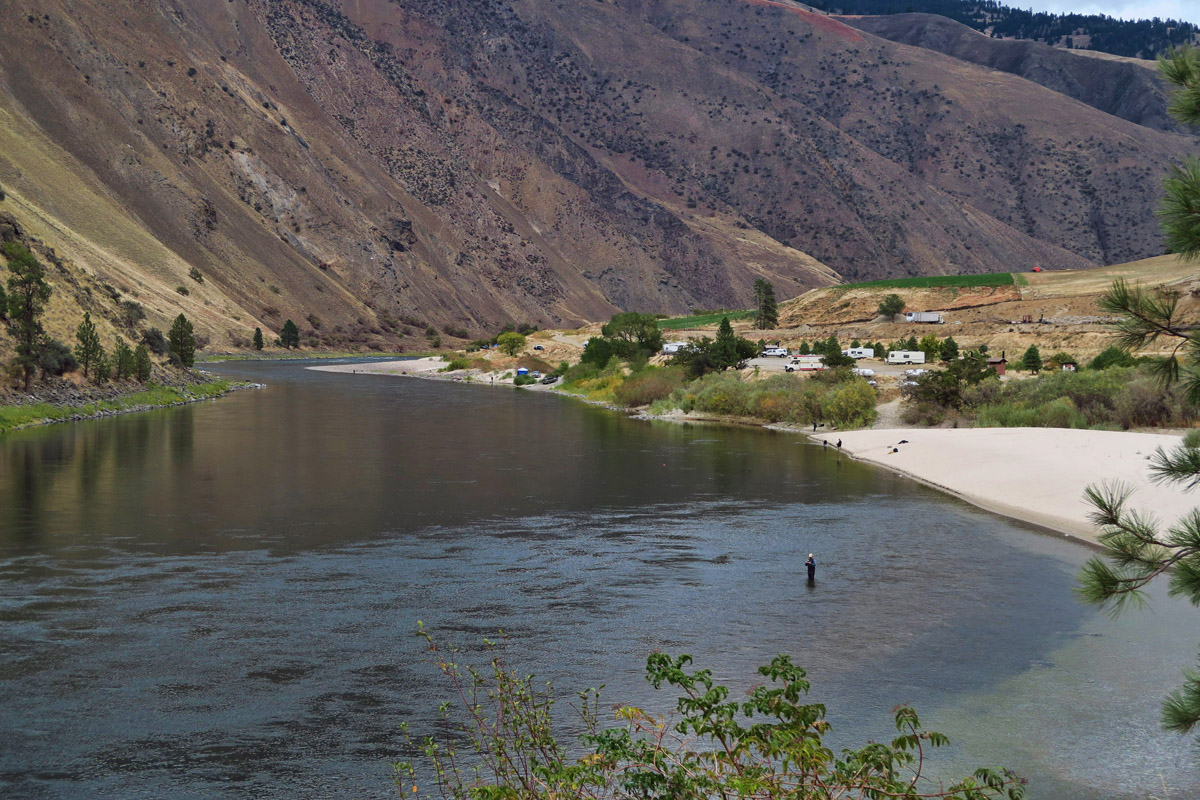 Though this boondock was beautiful, it had weird hunter vibes. I heard Elk bugling all night, then later learned there is an “elk range” right behind us, where you can trophy-shoot for $14K. No wonder it felt off…Don said the bugling was probably hunters, stalking their kill…Time to break out the orange-wear…

In traversing this route down through Idaho and across to the headwaters of the Salmon River, one thing I have been consistently impressed by is Idaho’s Scenic Byways.   Often times the roads themselves are more engaging than the destinations.  There are 30 scenic or historic roads designated as “Idaho Scenic Byways” for a total of over 2,400 miles.  If you stretched them out, it would be the equivalent of driving from Boise to New York.   There are loads of brochures and maps on these scenic routes.  (For the most comprehensive list of these byways, go to the Idaho Transportation Department website and type in “Scenic Byways” in the search box where you can download a 37 page pdf file with maps, descriptions, etc.) 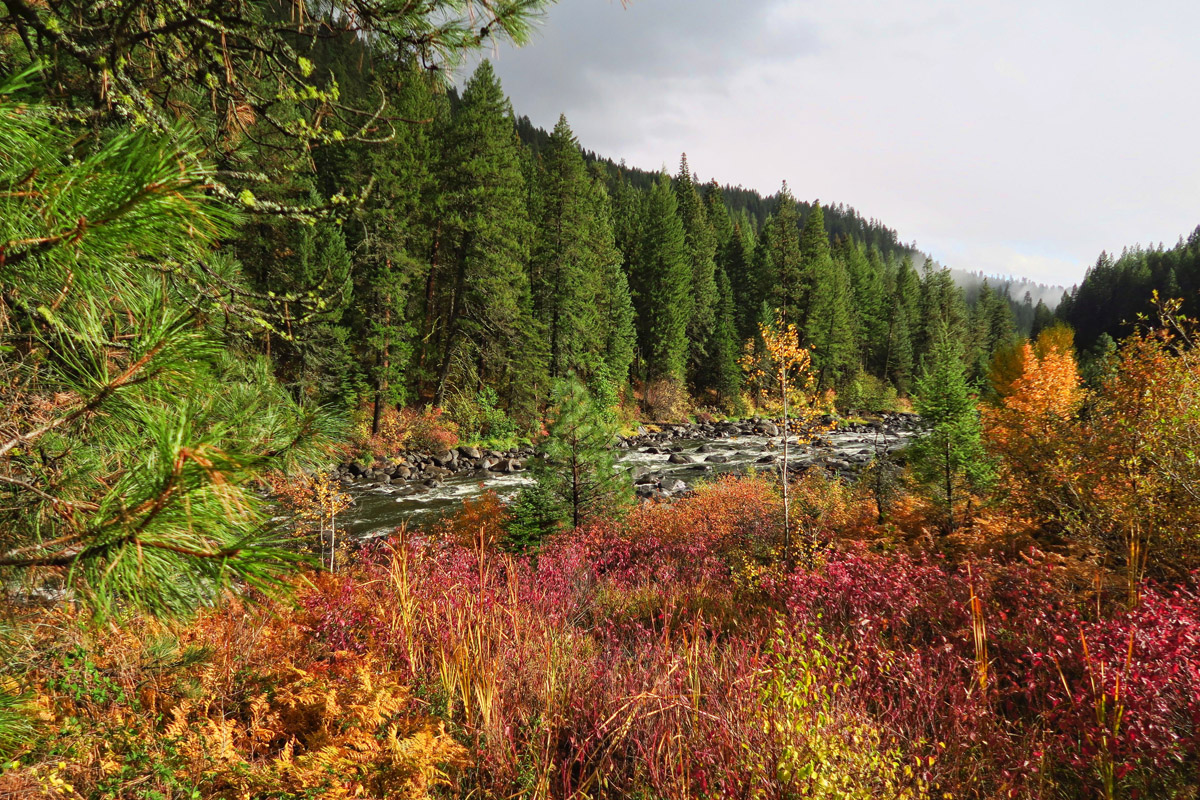 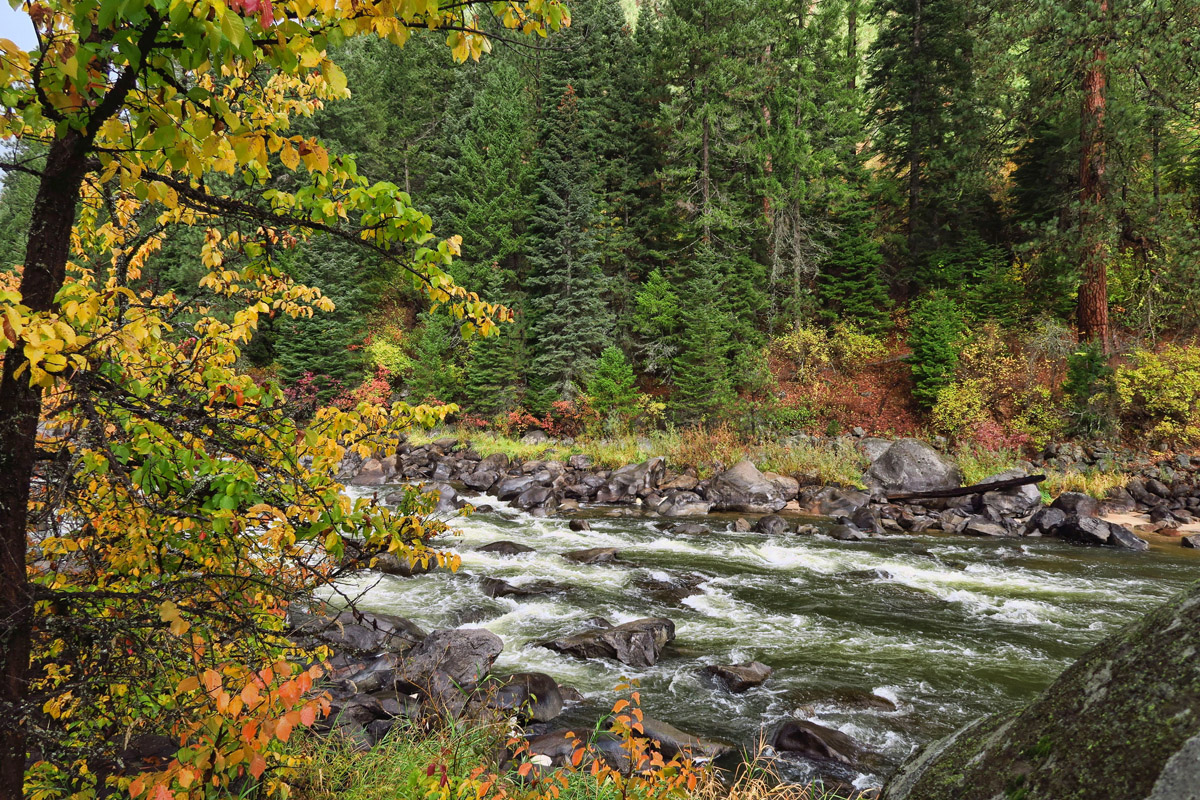 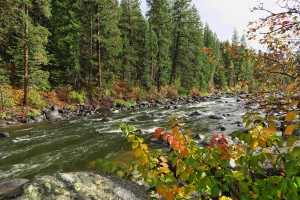 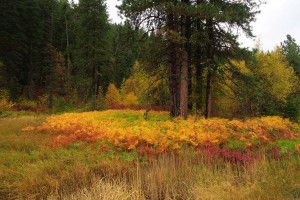 As we connect one Scenic Byway to the next, I am continually in awe of the variety and concentration of breathtaking scenery at every turn.  And I was expecting potato fields… 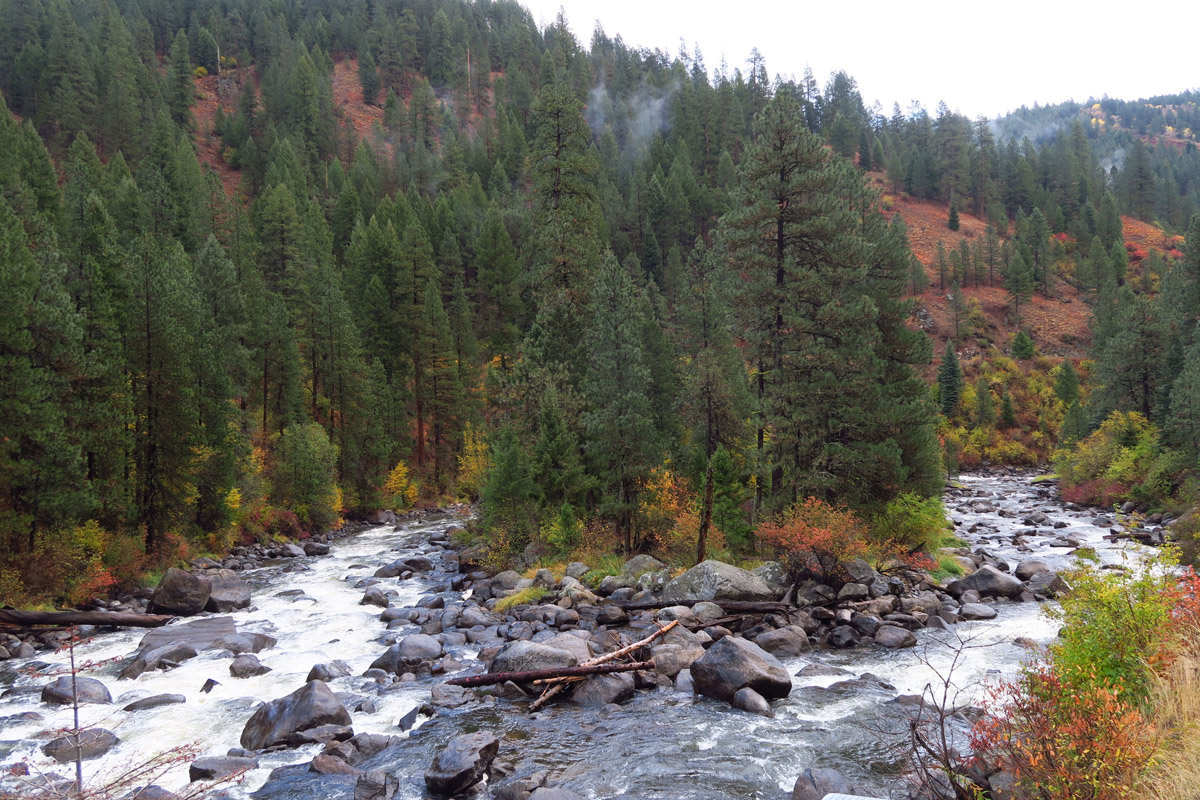 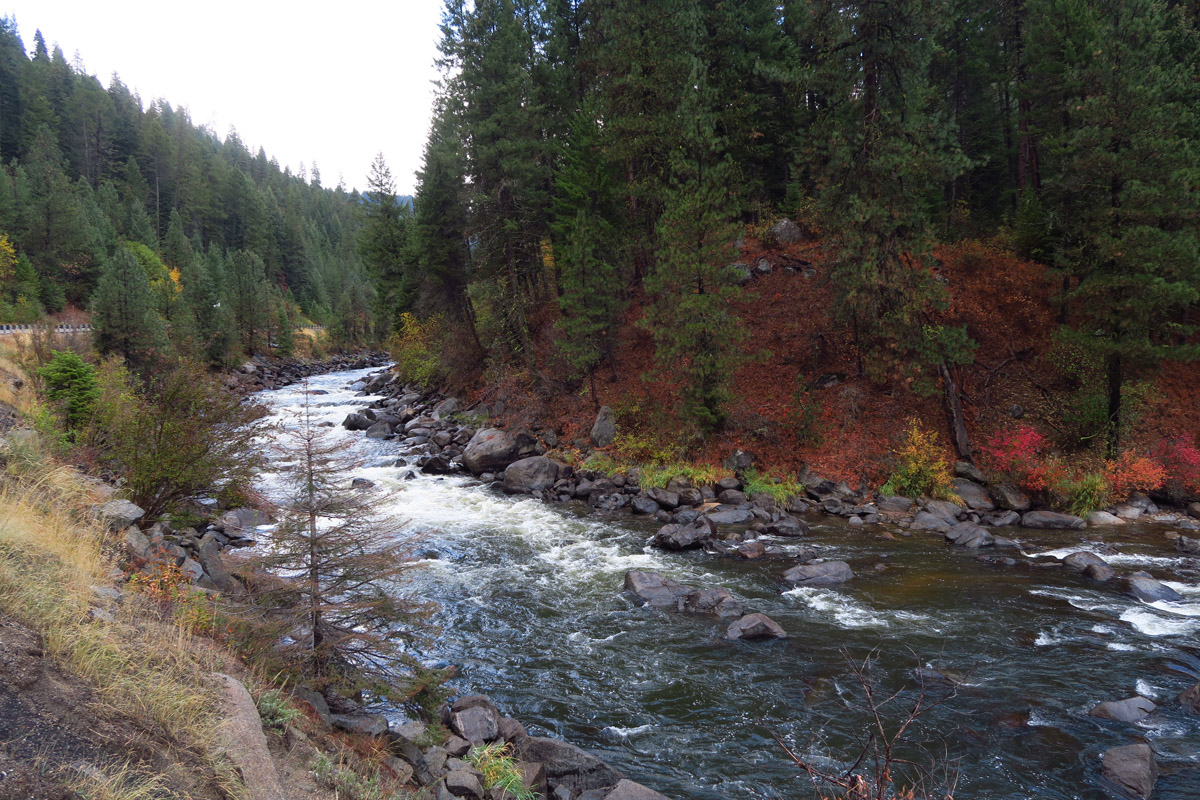 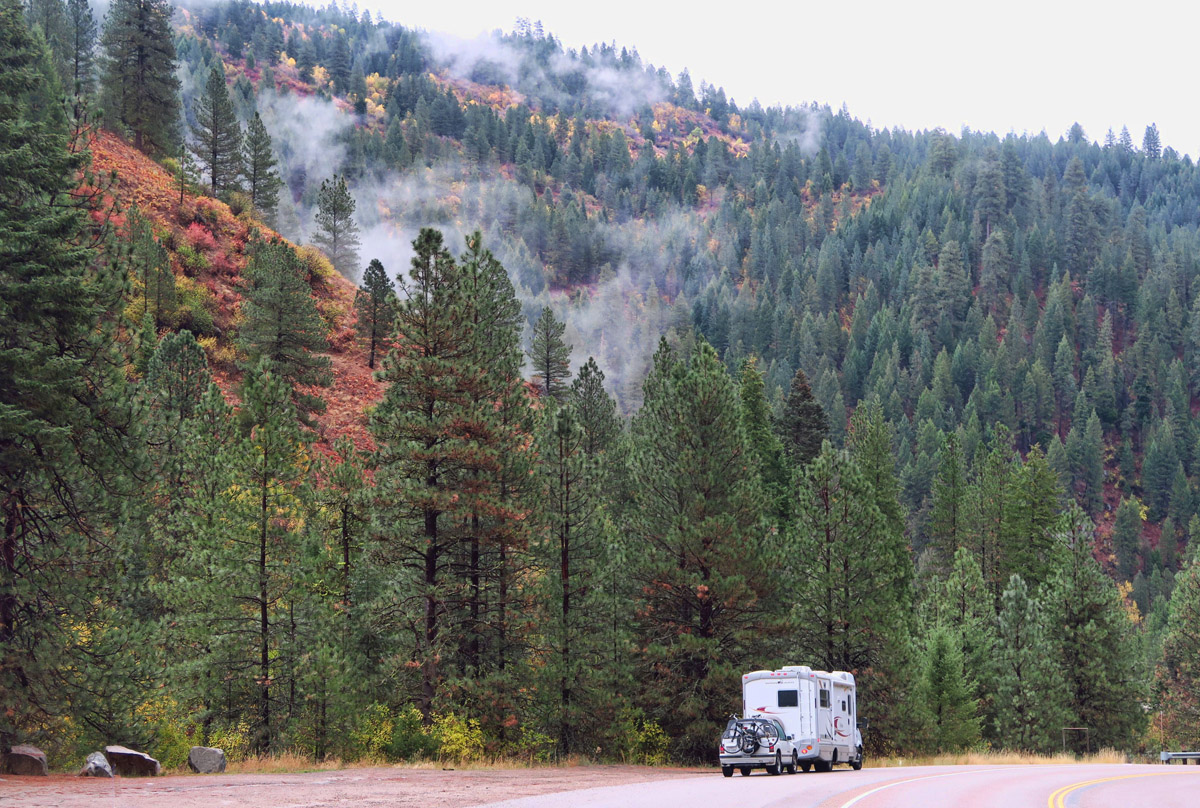