So yes, the sun did indeed rise again.  So why don’t I feel better?  I will not allow hate, racism, xenophobia or bigotry into my life. Whomever resides in 1600 Pennsylvania Avenue is not First Cause to my experience. (Insert safety pin here.) Enough.

I have written often about the beauty of Idaho’s Scenic Byways, and the Sawtooth Scenic Byway has to be the most beautiful of all!   As we head out of the Sockeye Campground and turn south through the Sawtooth Valley, we are surrounded on all sides by snow-capped mountains.  As we make our way up to the top of Galena Summit overlooking the Boulder Mountains, we traverse a good bit of snow on the pass, but the roads are clear. 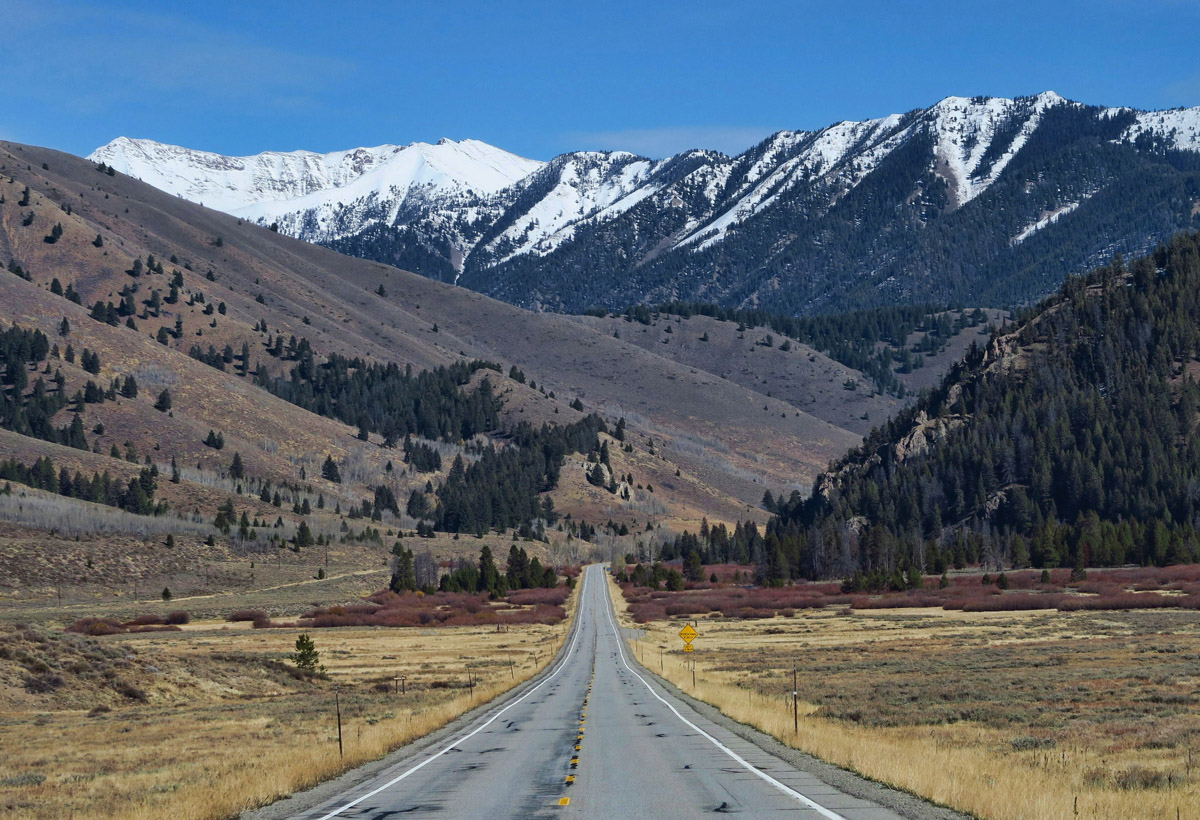 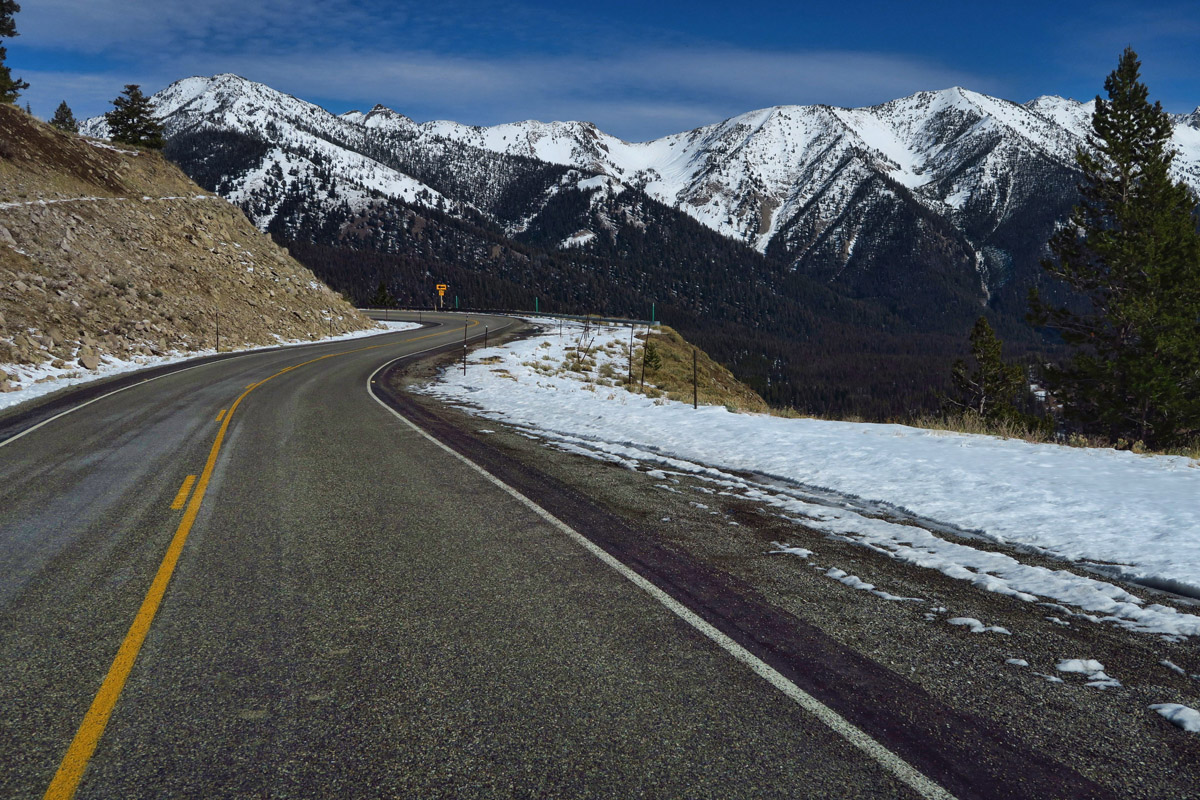 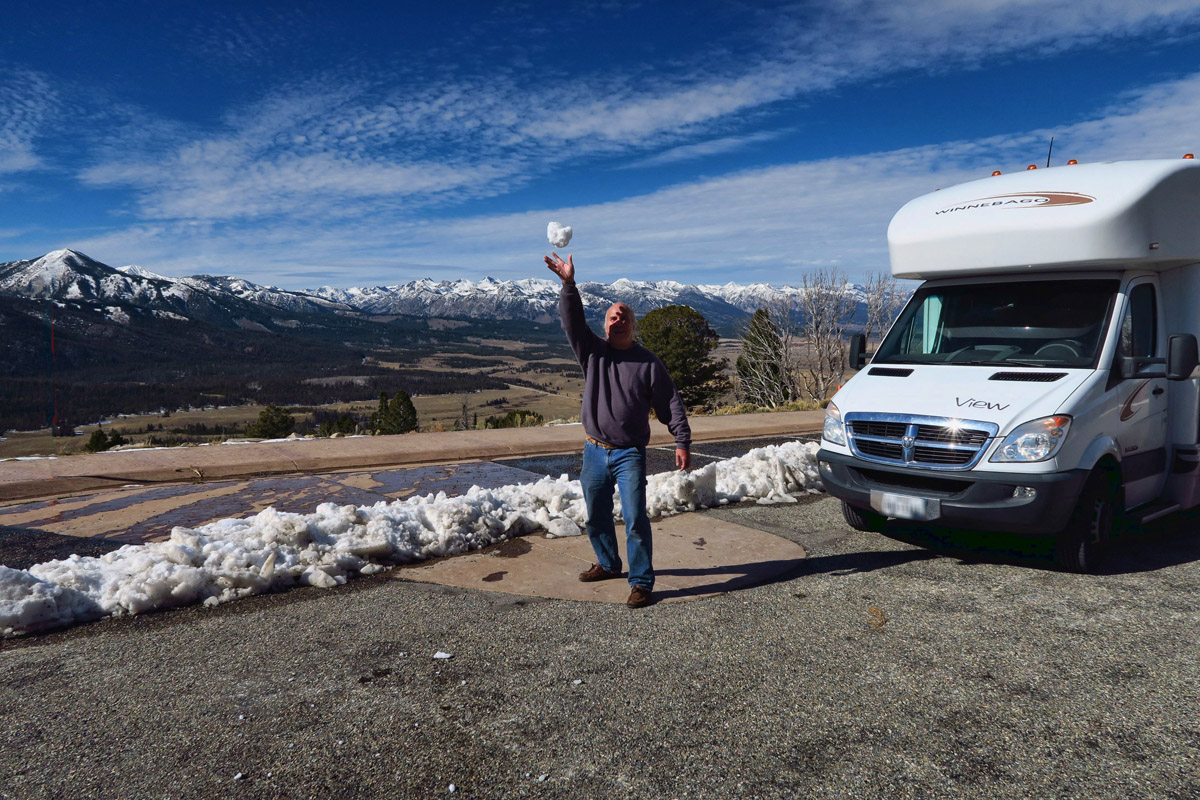 I’m in the lead, and I pull off to the side of the road frequently to take it all in.  I don’t want the beauty of this road to ever end!   Considering the Boulder Mountains are officially a part of the Rocky Mountain range, I feel justified in playing John Denver’s “Rocky Mountain High” as loud as my speakers will allow, only to be eclipsed by my bad sing-along.

Galena Summit, elev 8,701 ft, along Highway 75, the highest paved road in Idaho, is the sight of the headwaters of the Salmon River.    Views from this gorgeous summit look out over the Frank Church River of no Return Wilderness.  Established in 1980, this two million acre wilderness area honors Senator Frank Church (D) senate floor sponsor of the Wilderness Act of 1964, which protected 9 million acres of land as part of the National Wilderness Preservation System. In 1968, he introduced the Wild and Scenic Rivers Act, which included the Middle Fork of the Salmon River, so that rivers “shall be preserved in free-flowing condition, and that they and their immediate environments shall be protected for the benefit and enjoyment of present and future generations.”  (Paraphrased from Wikipedia.)  There is a beautiful rest stop atop Galena Pass named for the Senator. 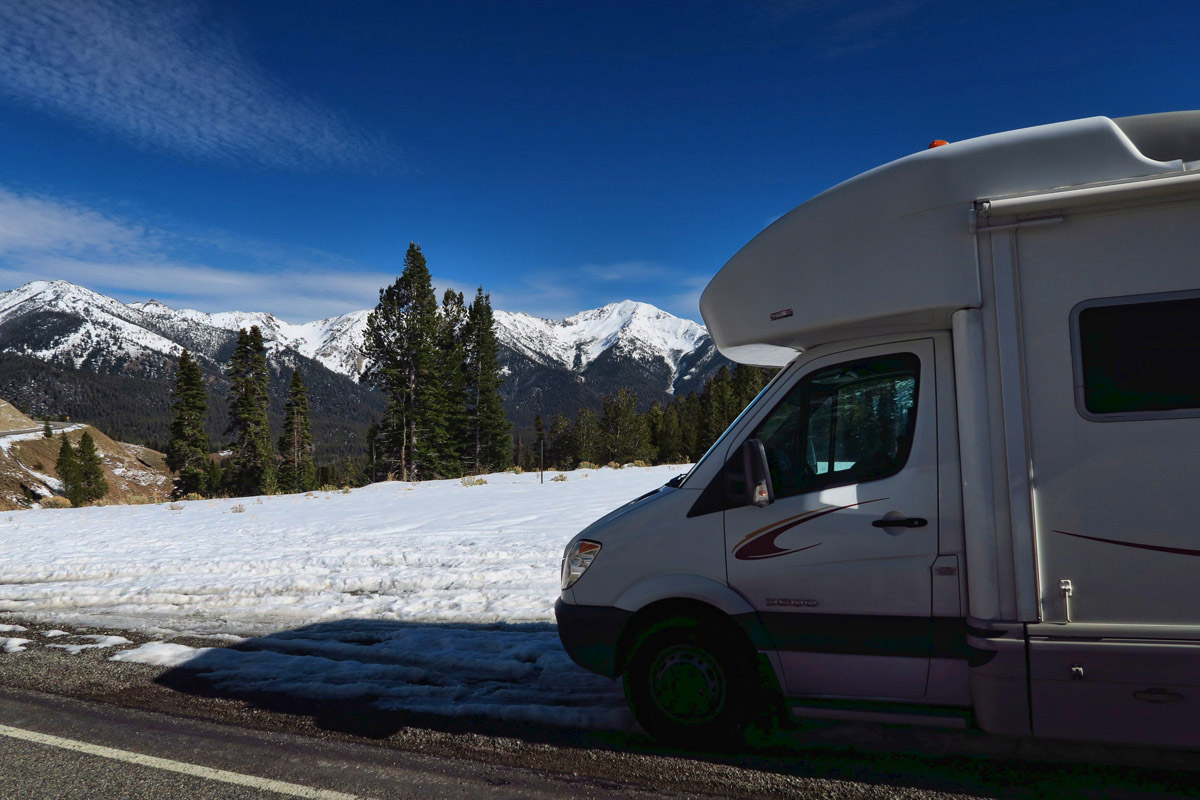 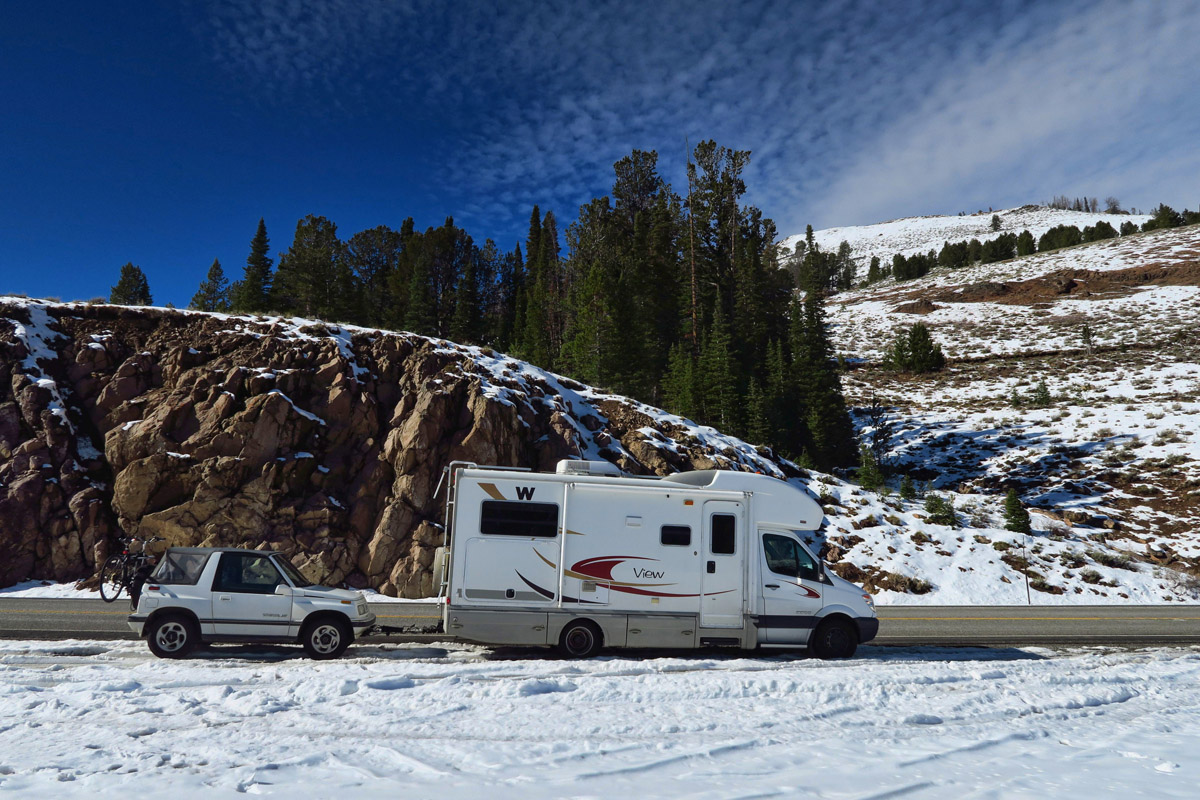 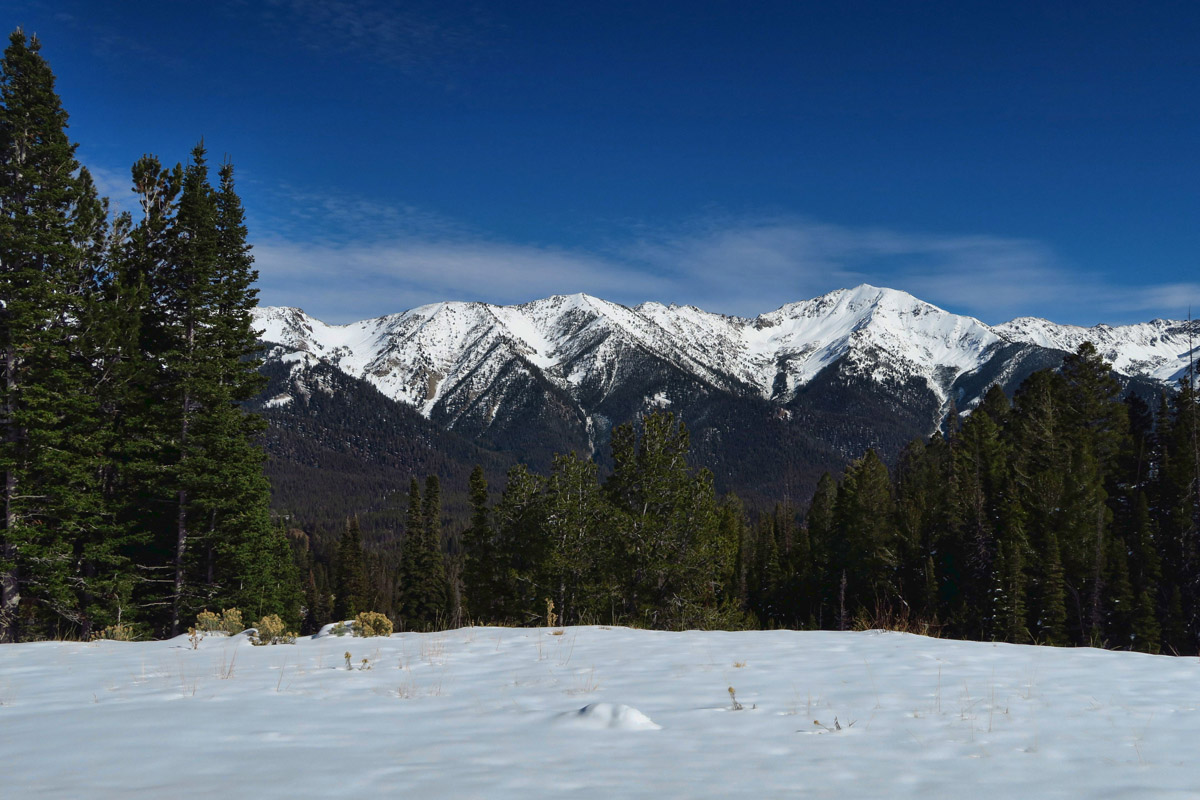 The Sawtooth Scenic Byway leads through Sun Valley, Idaho, adjacent to the town of Ketchum.  As a long time downhill ski enthusiast, I always wanted to visit Sun Valley.  My former husband and I often discussed it as an alternative to the increasing crowds in the Colorado Summit Area and the Cottonwood Canyons of Utah.   But flights into the remote region always proved to be cost prohibitive.  Since we were passing through, we parked the rigs, unhitched the Tracker, and went for lunch and a look around the ski area. 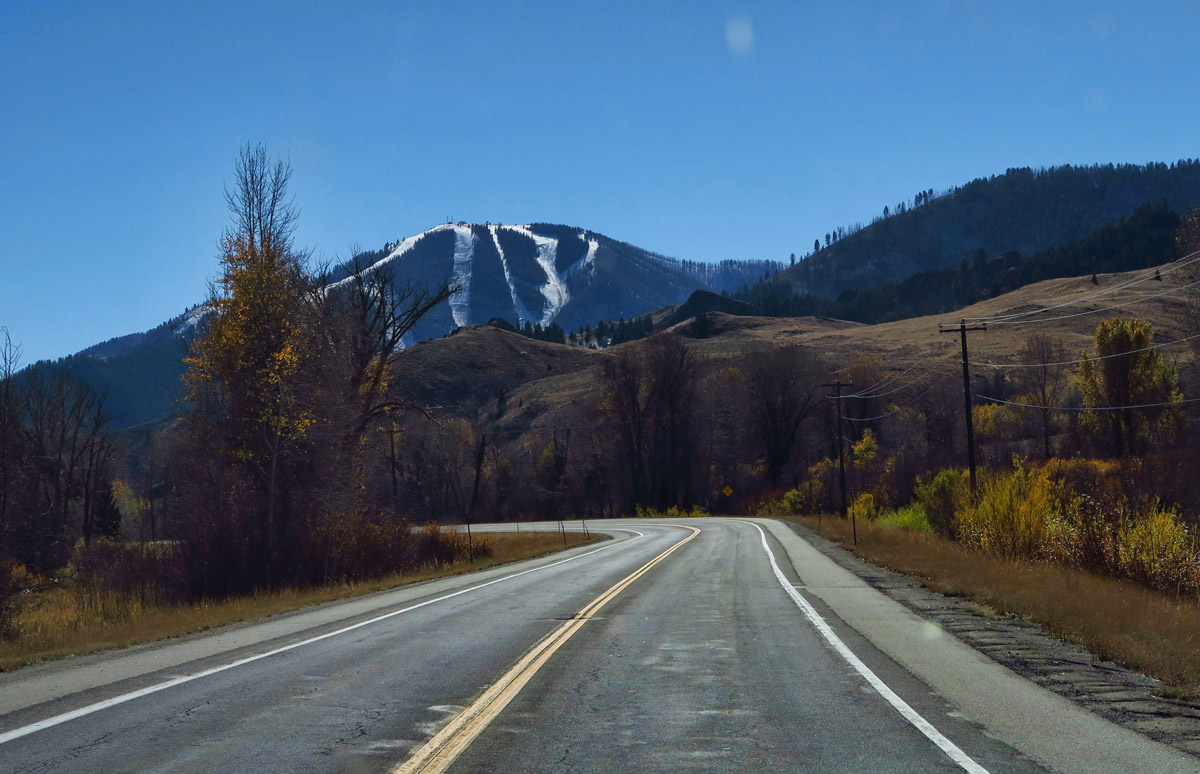 I see snow on the runs ahead, but not quite enough just yet. 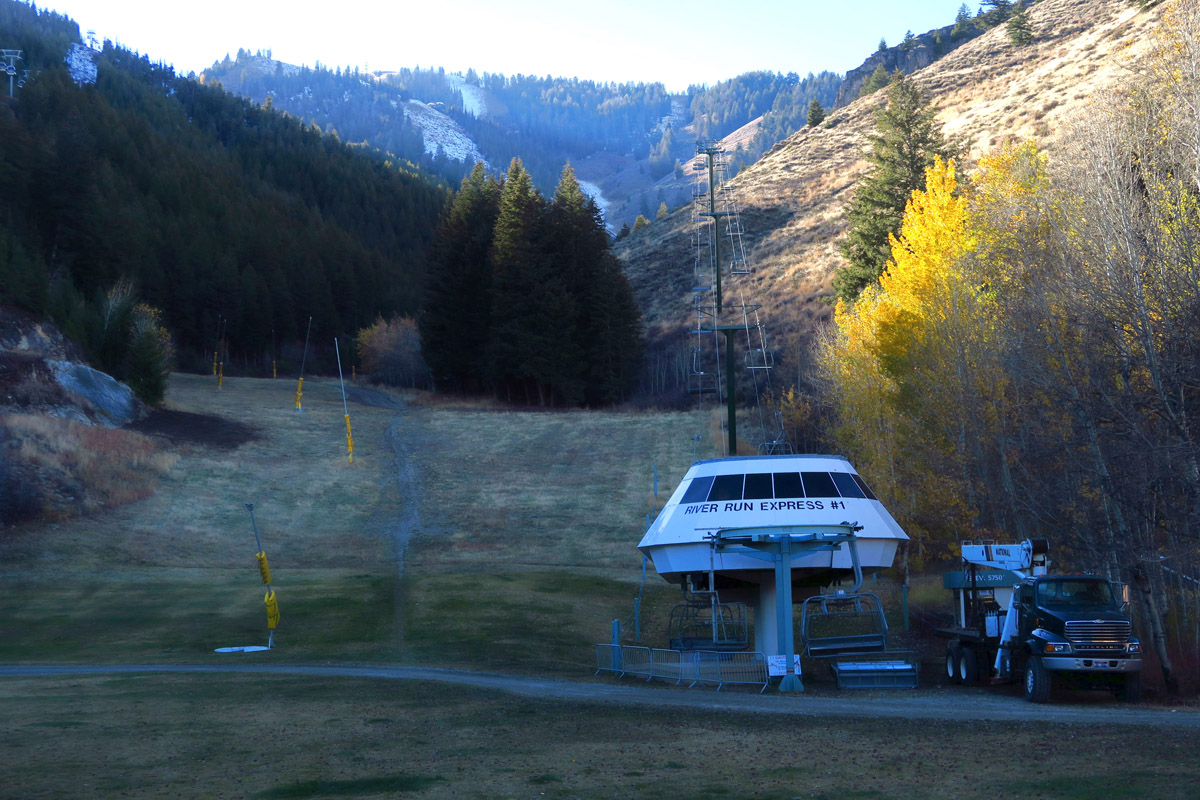 One lift is running for tourists…too early for skiers. 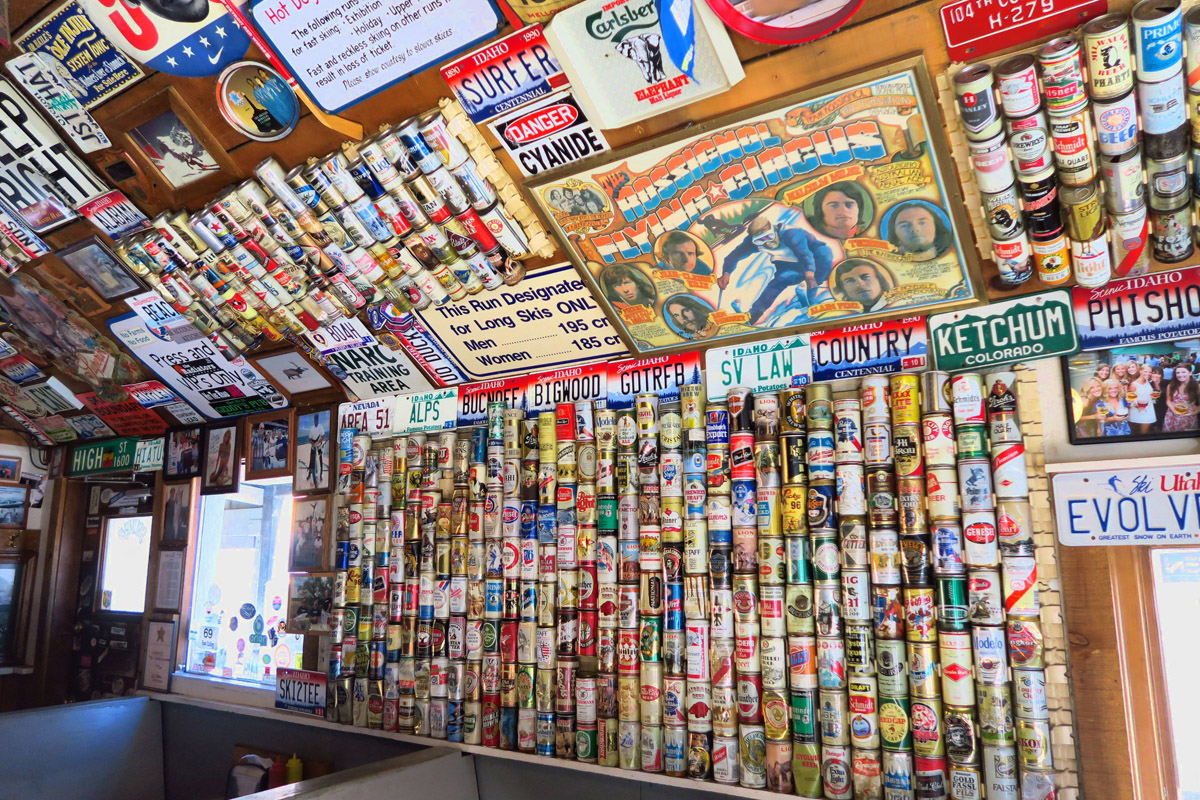 When in Ketchum, Idaho, I highly recommend “Grumpy’s.” A hole-in-the-wall burger joint with a sign outside that says “Sorry, We’re Open.” Not so grumpy inside…

We see signs for a Jazz Fest, but no one in Ketchum seems to know anything about it.  Then as we are looking around the Sun Valley ski area, we wander into a back door of the lodge and find ourselves right beside the stage of the jazz performers.  Gate crashers that we are, we stay and listen for a while. 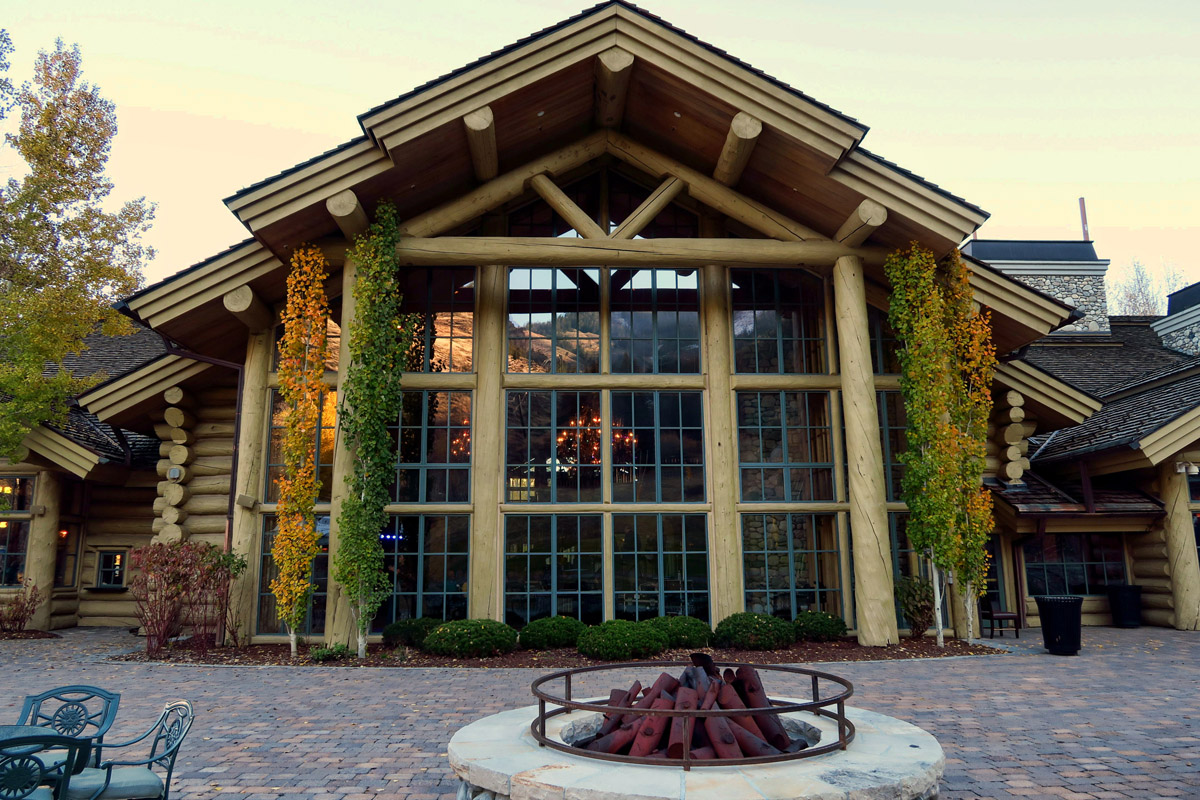 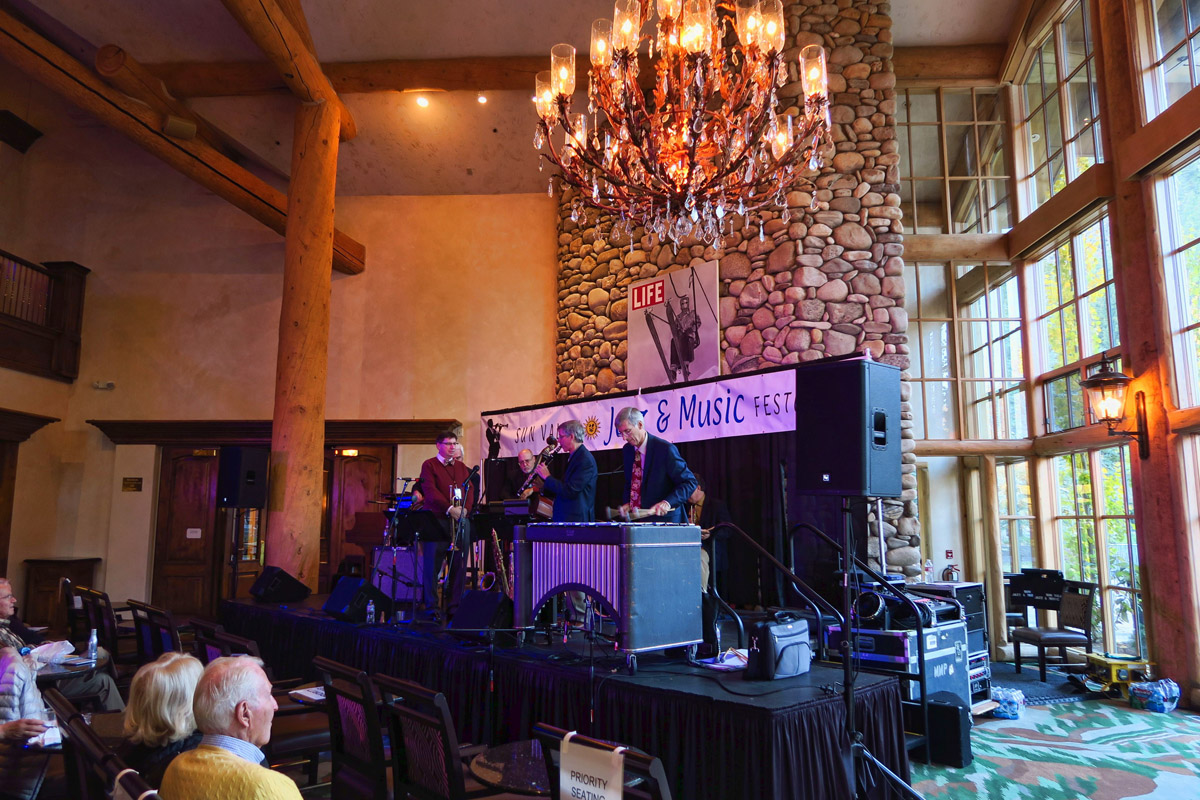 The back door is open, so we walk through to find the jazz concert in full “swing.” 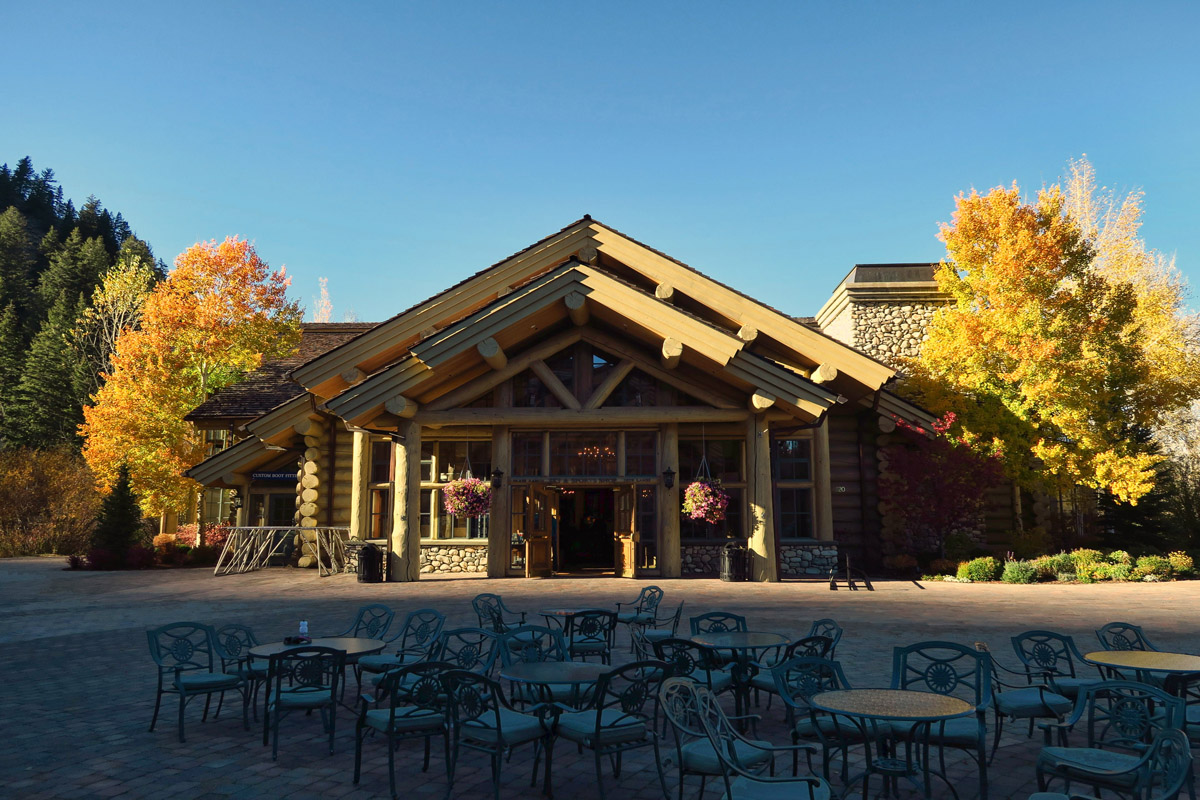 Sun Valley being a “resort to the stars” has the only full service gas station I have seen since leaving Oregon.  We pull into the Sinclair to top off the Tracker, when a young, freshly scrubbed blonde haired man comes out wearing a uniform shirt with the top button synched.  He looks like he just stepped out of a Post WWI Doughboy movie.  I tell him we only have an afternoon to look around town, and ask for his recommendations of things to see in the area.  “Well, Ma’am, I would personally recommend the Hemingway Memorial.”   Hemingway??  In Idaho?   Having always associated the great American novelist with Key West and Cuba, I didn’t realize he had such firm roots in Idaho.   But in doing some research, I learn not only did he have a summer home just outside of Ketchum, it is also the location where he chose to end his life. With his favorite shotgun.  Just one month shy of his 62nd birthday. 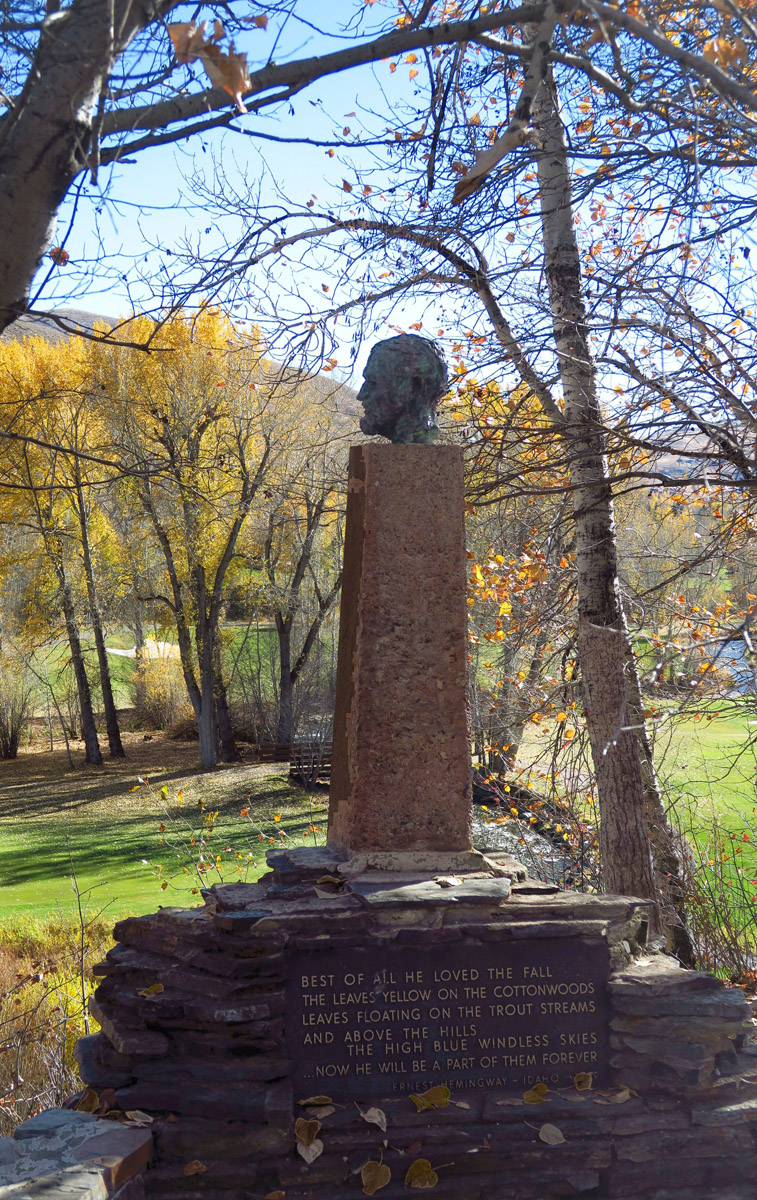 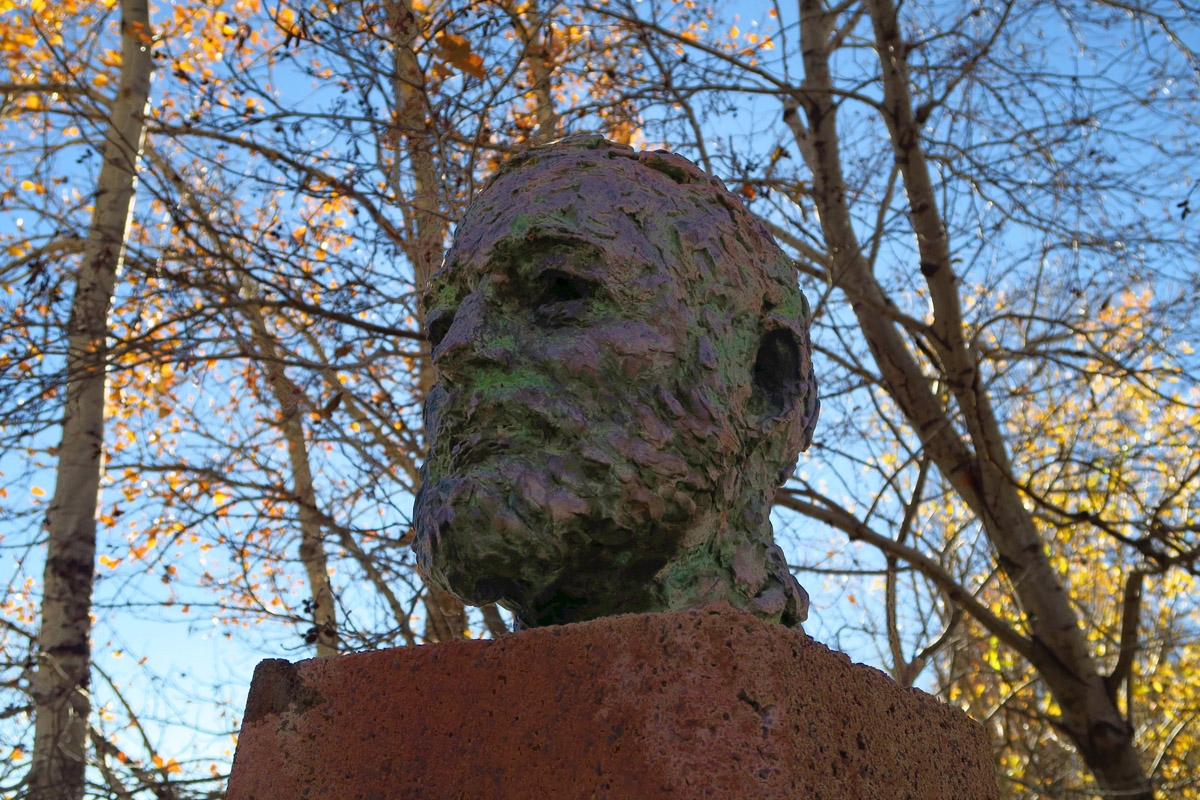 We make two attempts to find the memorial.  We pass it on the way out of town, then ask some other tourists, who point us down the wrong road.  But we eventually find it.  Just off the bike path there on Trail Creek Road, overlooking Wood River Valley alongside a small stream is the peaceful memorial site.  Smaller than one might imagine, a lone kiosk with a bronze bust on top.  The view overlooking the valley is serene, with the sound of a small stream diversion through the memorial.  How poignant that the plaque containing the epitaph is covered in golden leaves…

Best of all he loved the fall
the leaves yellow on cottonwoods
leaves floating on trout streams
and above the hills
the high blue windless skies
…Now he will be a part of them forever. 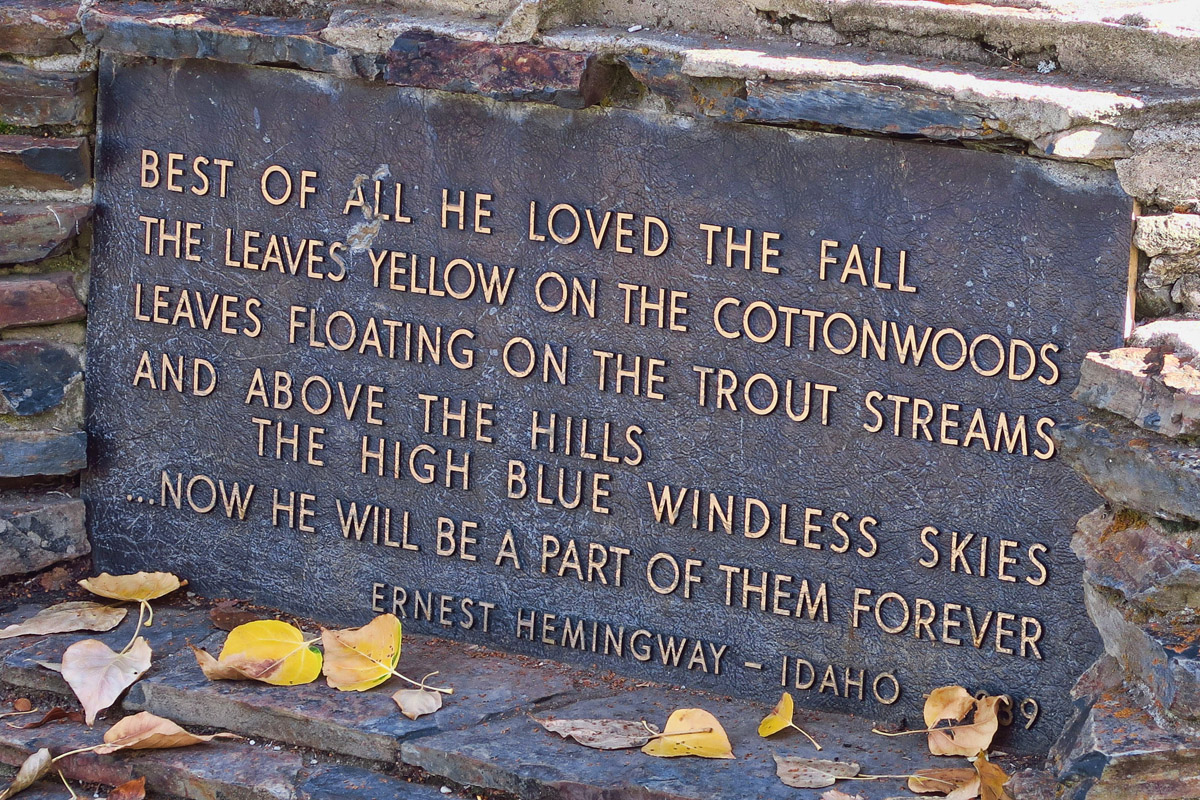 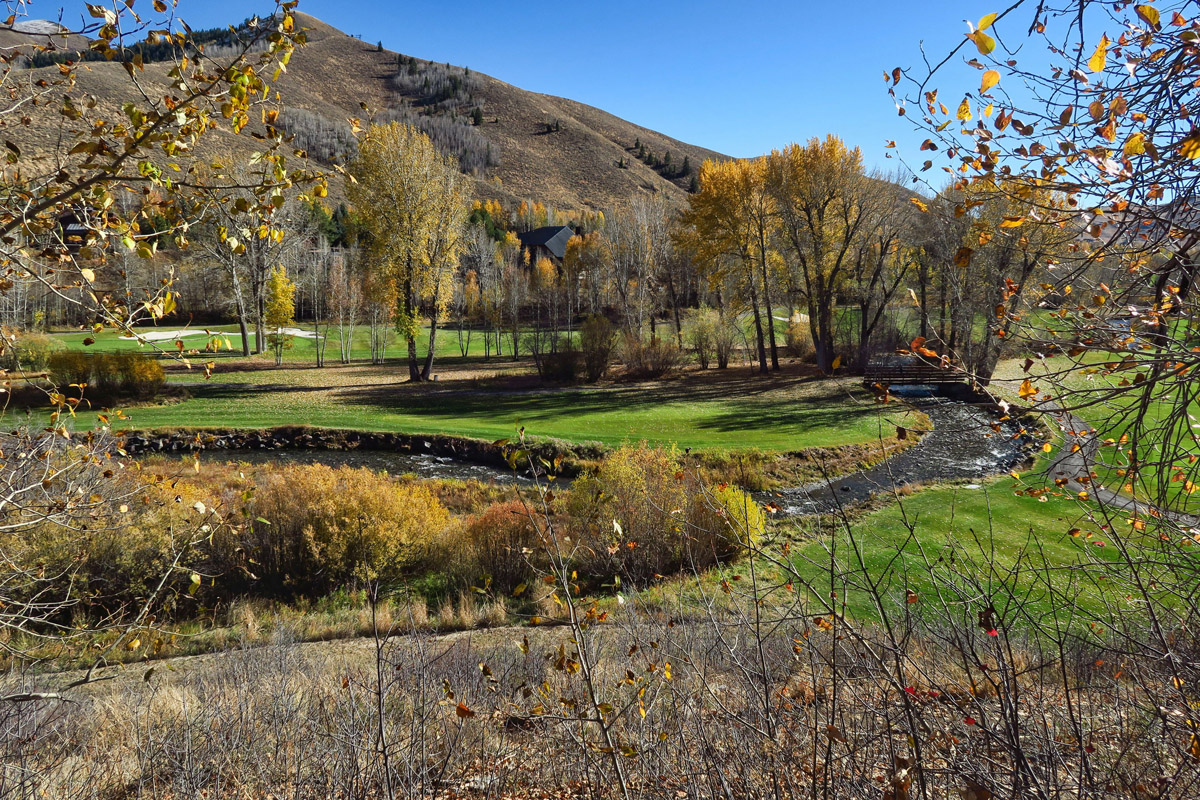 Beautiful view overlooking the valley from the Hemingway Memorial.

As we continue on down through southern Idaho, two scenic byways converge.  We leave behind the Sawtooth Scenic Byway and continue on to the Peaks to Craters Scenic Byway, where snow covered sky peaks give way to the remnants of the exposed bowels of the earth, ripped open by volcanic eruptions along the Great Rift.   Next stop, Craters of the Moon… 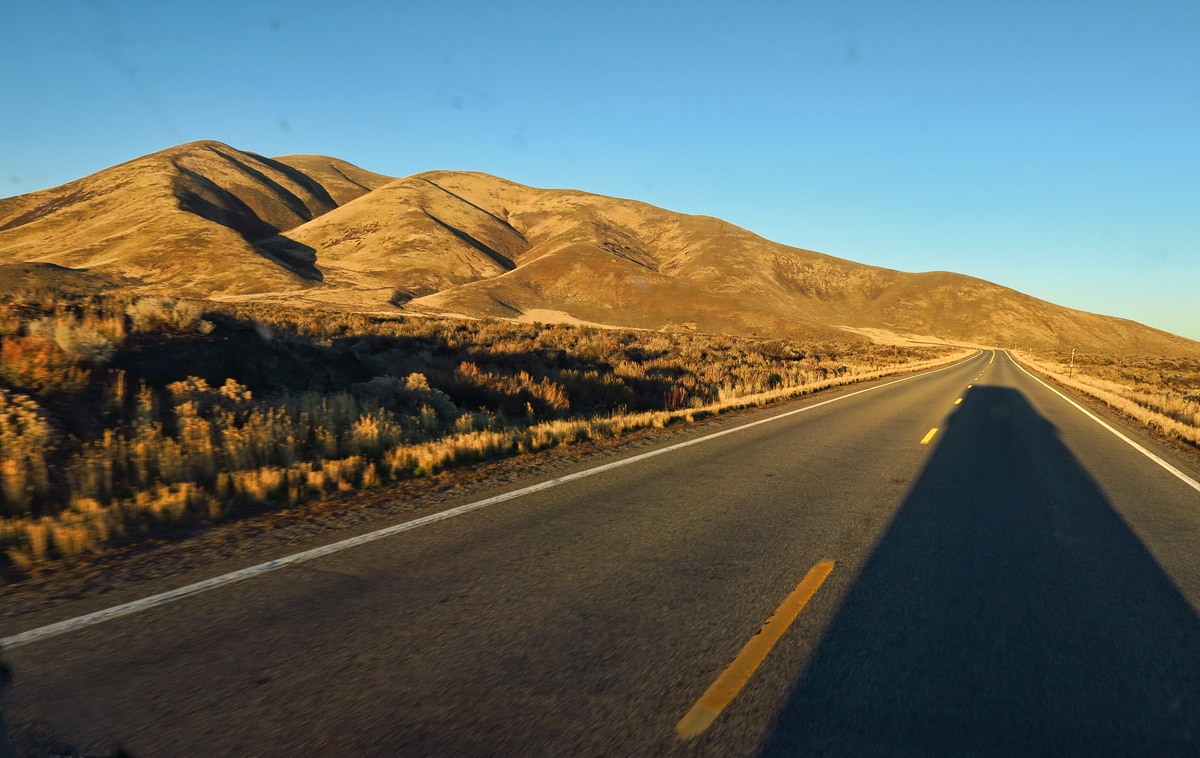 “You can’t get away from yourself by moving from one place to another.”
― Ernest Hemingway, The Sun Also Rises

30 thoughts on “The Sun Also Rises”