As we leave the beautiful snow-capped mountains of Sun Valley, I tell Don, “Take one last look at that beautiful snow, as we won’t be seeing that again for a long while!  We are headed for the bowels of the earth.”   In just a short, two hour drive along the Peaks to Craters Scenic Byway, I am in scenic shock. 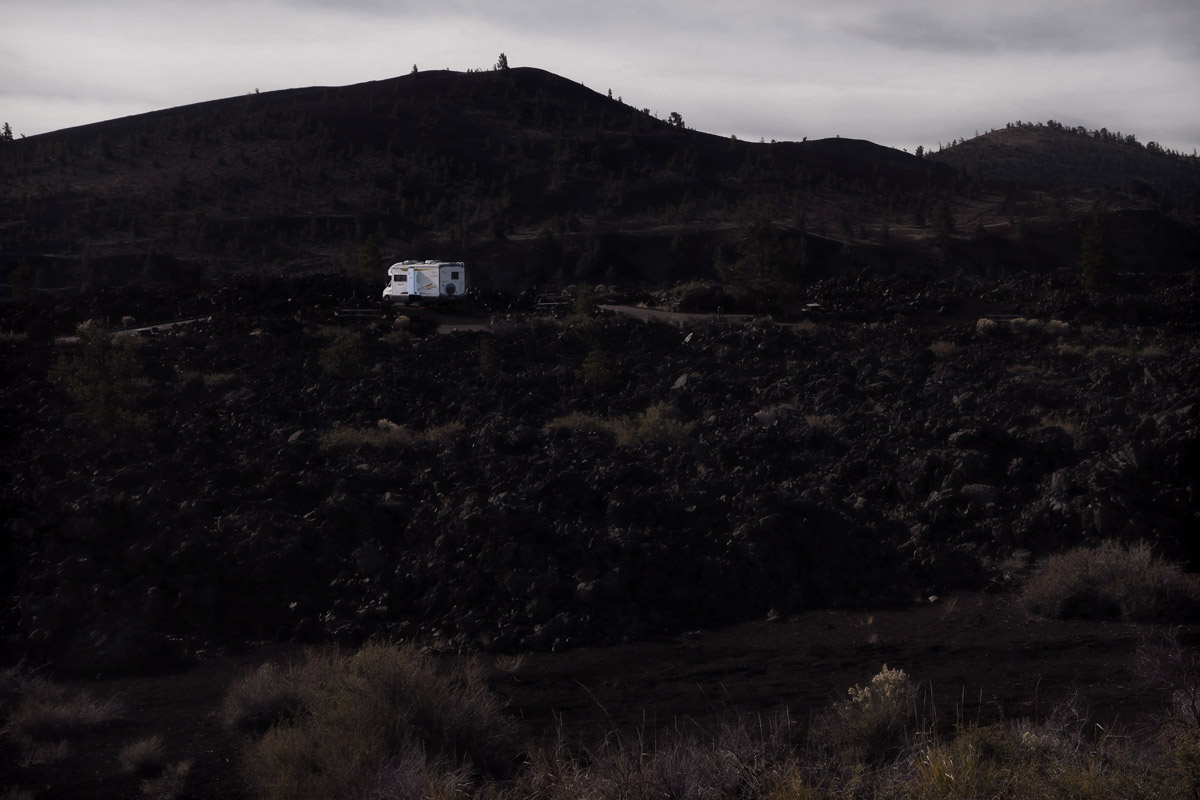 But not only am I in scenic shock, I’m in culture shock as well.  We stayed too long in Sun Valley, but I knew we only had a couple of hours drive, and as long as we made it by sundown, there should be no problem.   We had been the only two people in the last four or five campgrounds, so why should Craters of the Moon prove to be any different?  Besides, they had just finished resurfacing the 42-site Lava Flow Campground there, so all the sites should be nice and level, right? 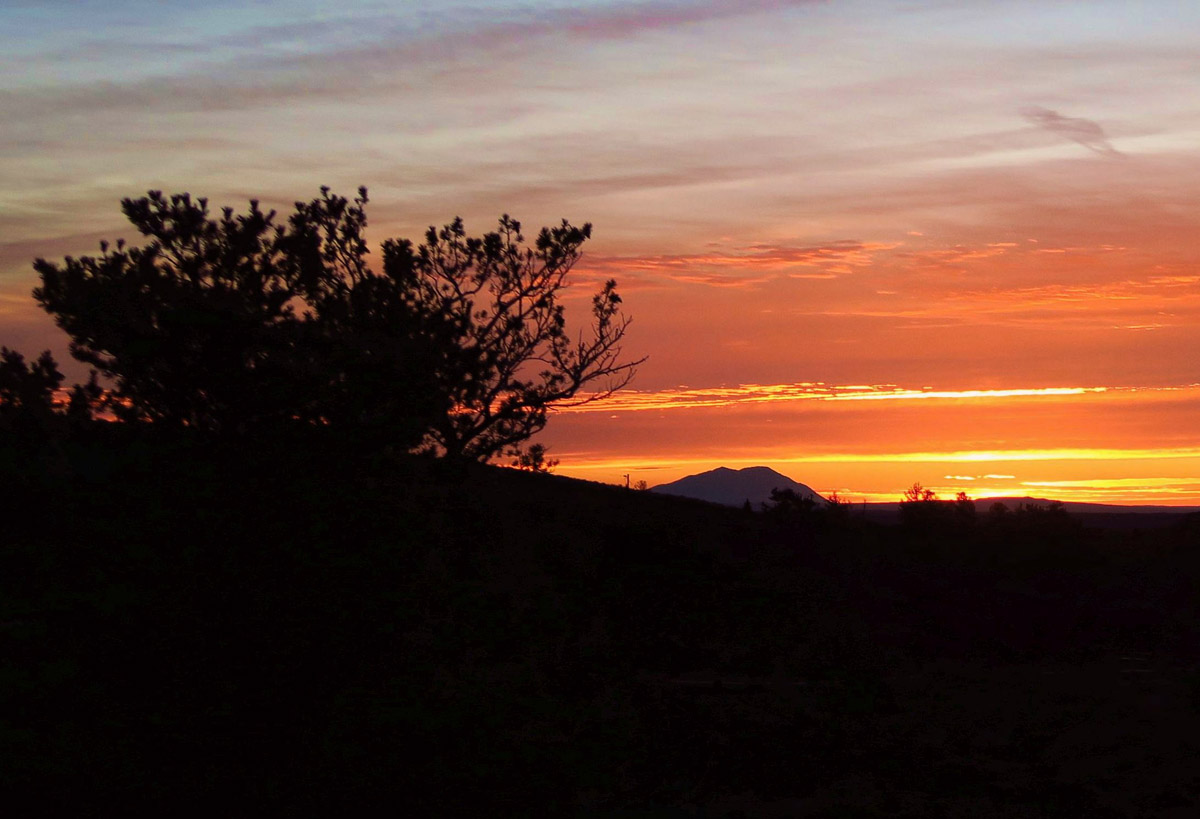 Sunset over the Cinder Cones, taken from campsite. 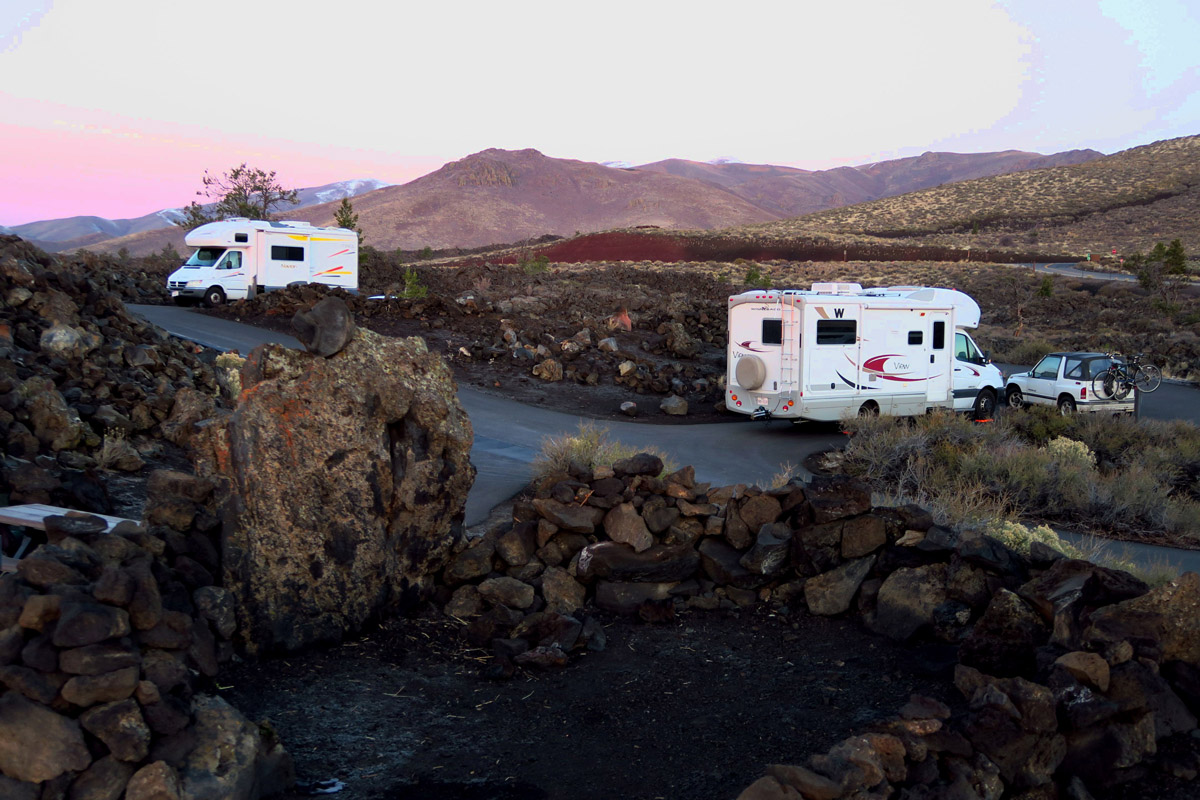 Parking on the dark side of the moon. 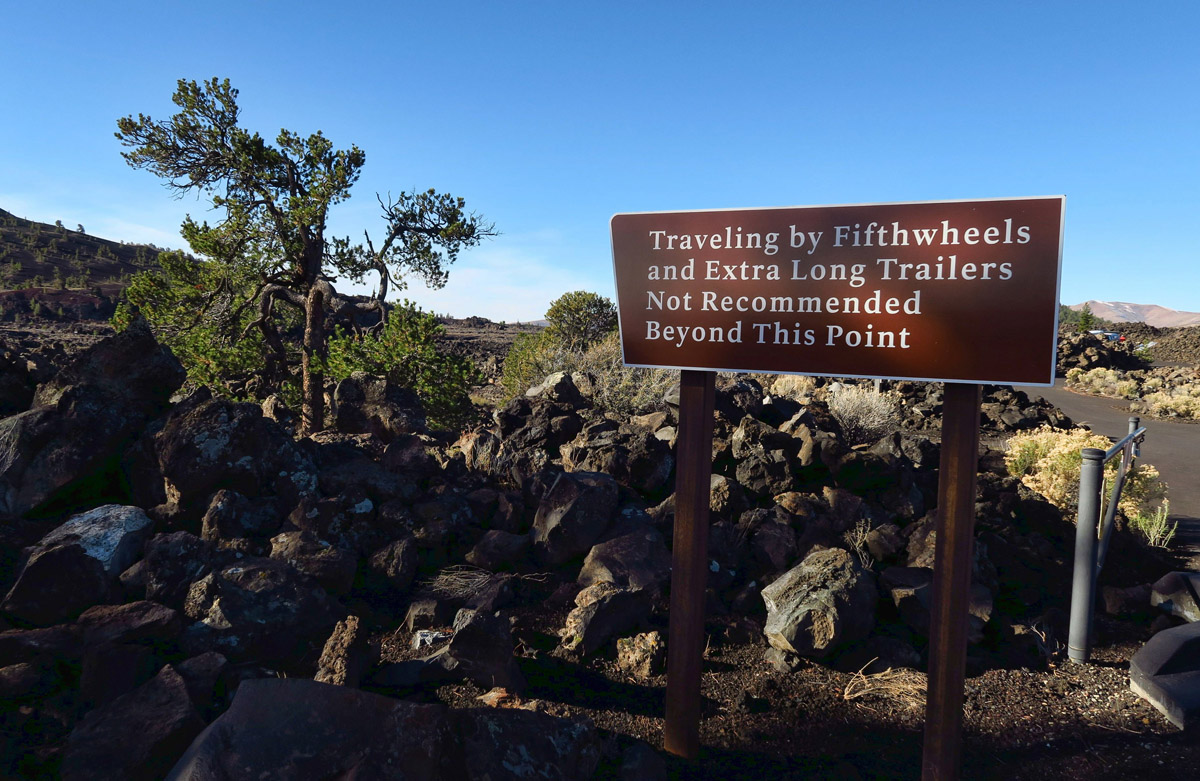 It’s times like these when I embrace my 24 ft Skinnie Winnie!

We arrive at the campground about 30 minutes before dark, only to find all the lower, more level sites to be filled with big Class A’s, while the higher loop has carloads of Boy Scouts circling.    I feel like a Stranger in a Strange Land, someone who just came in from the pioneer atmosphere of the Sawtooth frontier to find a bunch of modern day “moon rovers” walking around with Petzel headlamp beams lighting up the dark side of the moon. 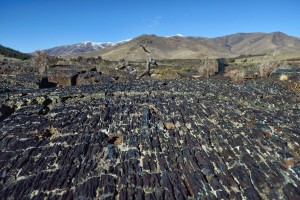 Informational signs along the trail estimate this to be one of the newest lava flows, about 2,000 years old. 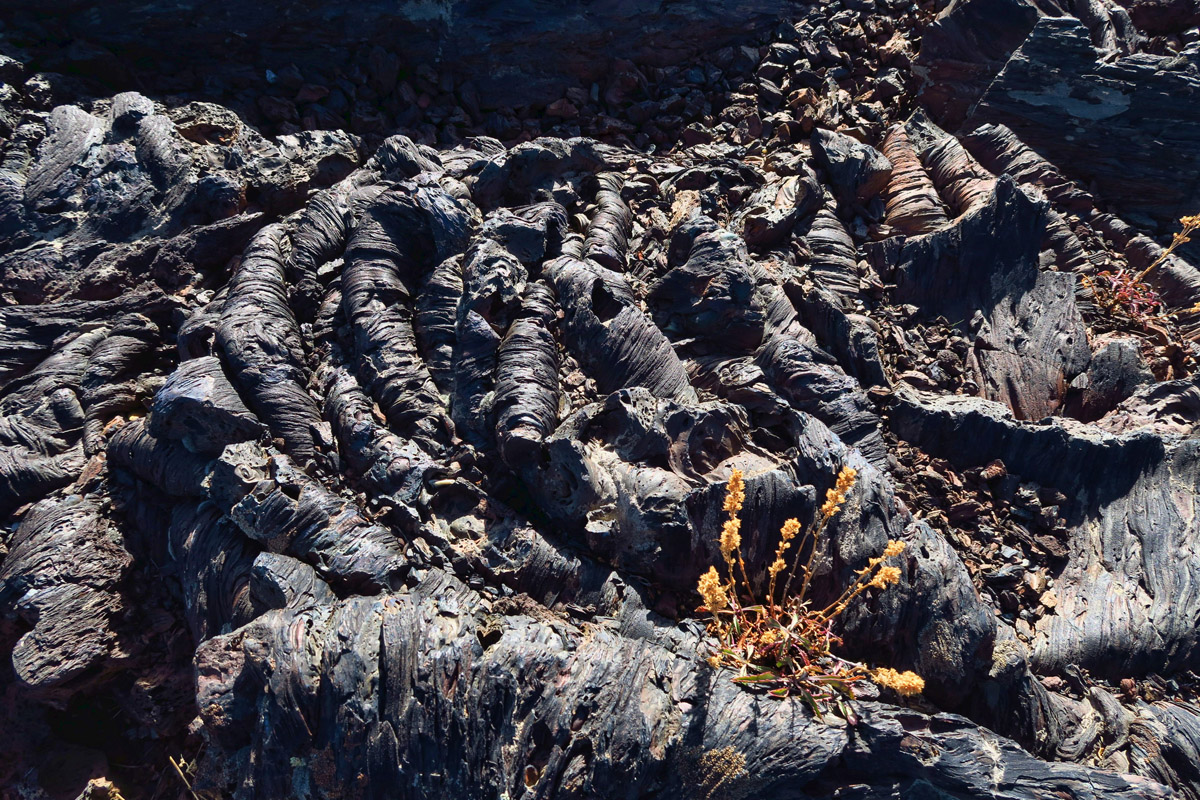 This is known as “pāhoehoe lava,” which flowed as a liquid, giving it a ropy appearance. 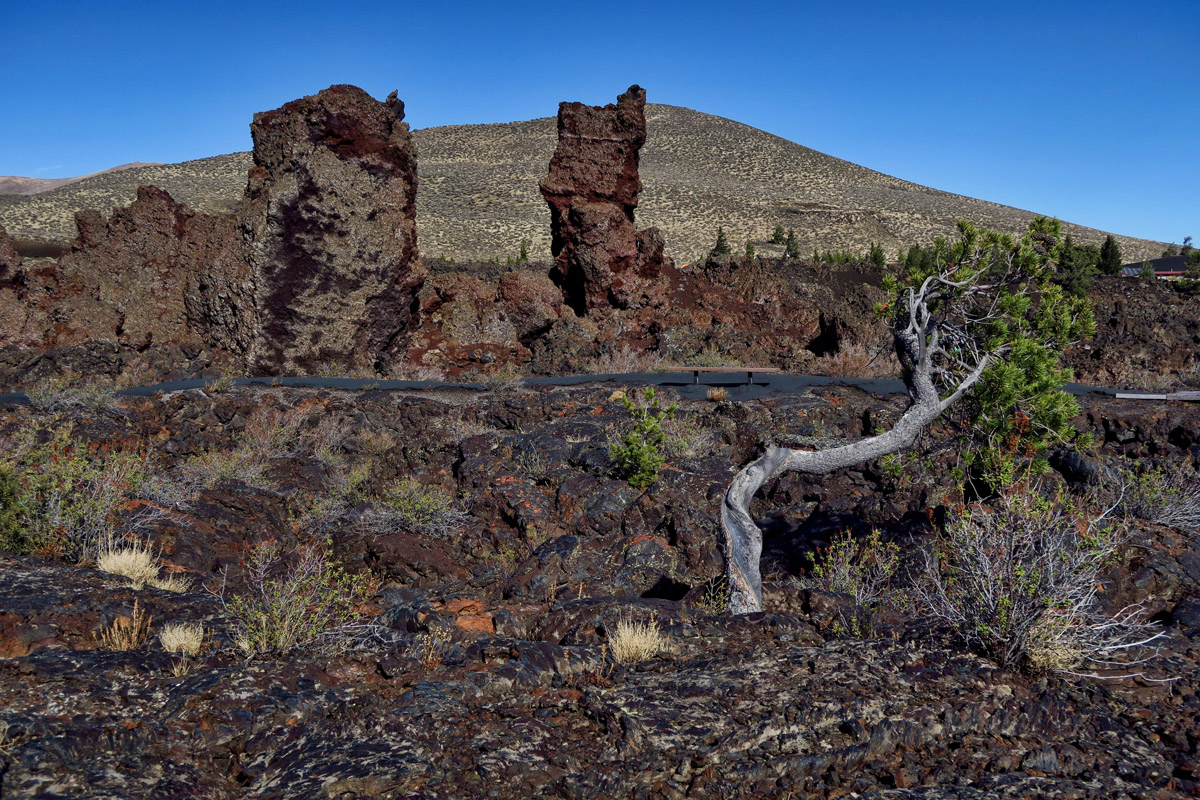 This is known as `a`a (ah-ah) lava, with a more stony and rough surface. 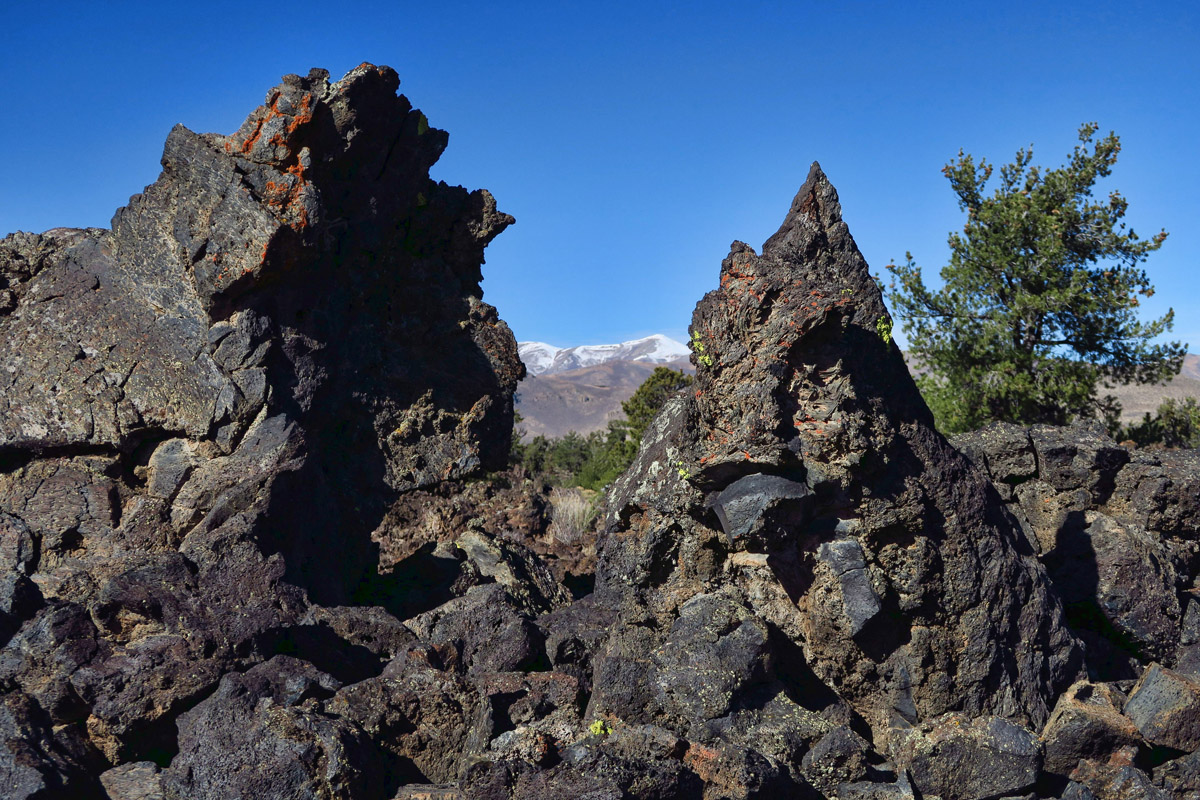 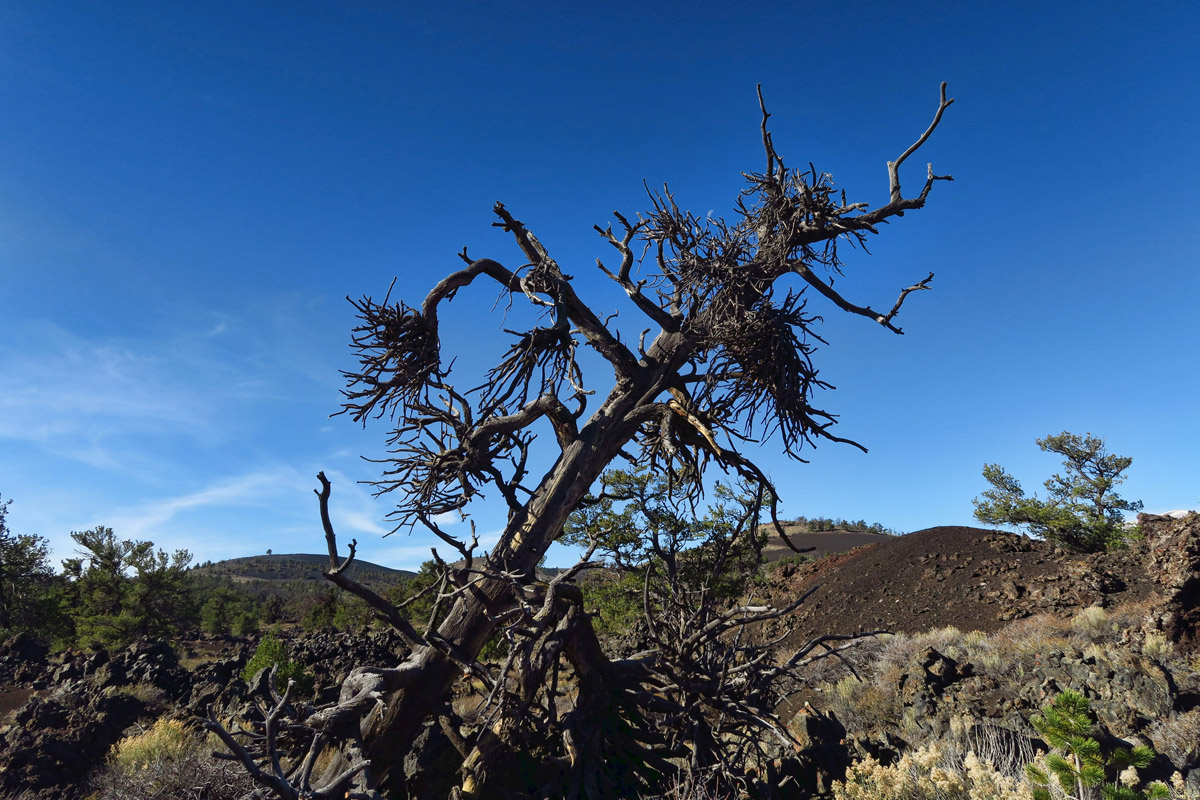 This tree makes me think of the Scarecrow.

We race around the loop to try to grab what we can.Don finds a perch high up on the ridge.  I tell him “I think you would be more level down here on this lower loop,” to which he replies,  “I have a signal up here.”  “Okay, I’m coming up!”  I had forgotten it was Friday.  We were lucky to get two of the last remaining sites in the park. 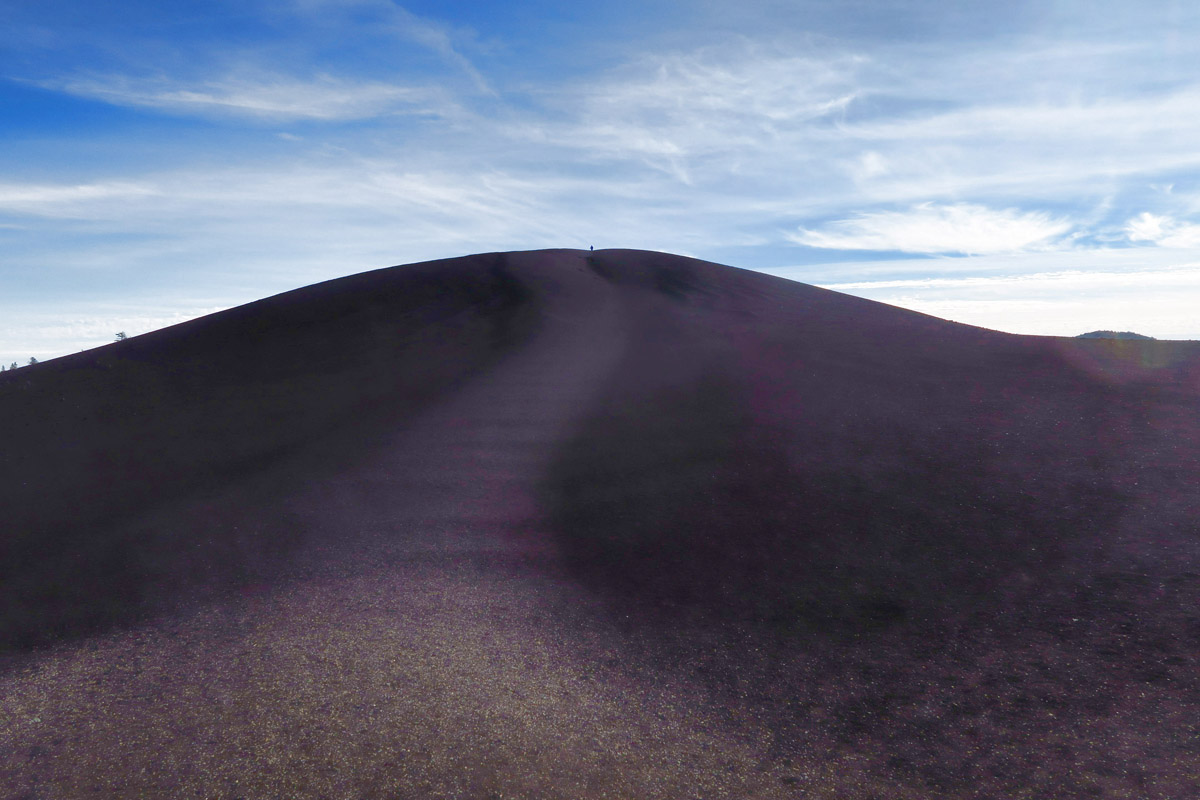 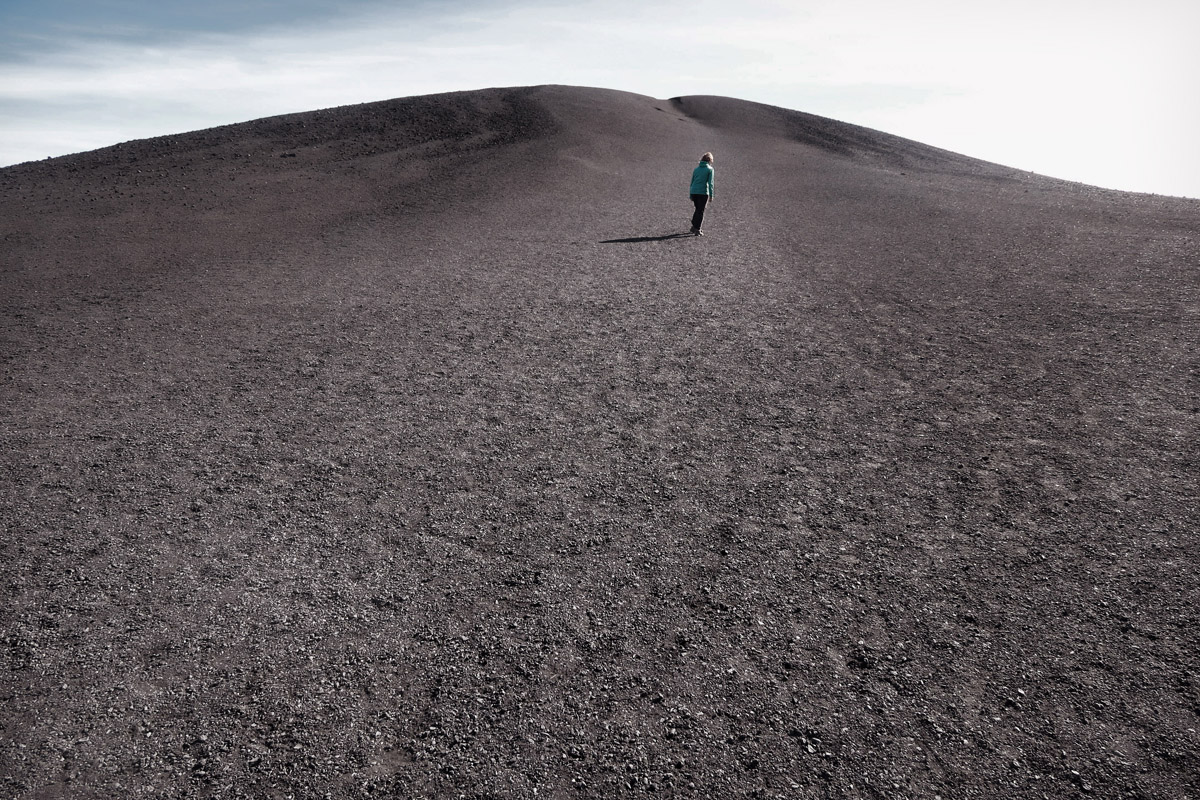 Climbing to the top of the Inferno Cone offers a great view of the Great Rift and Big Cinder Butte. 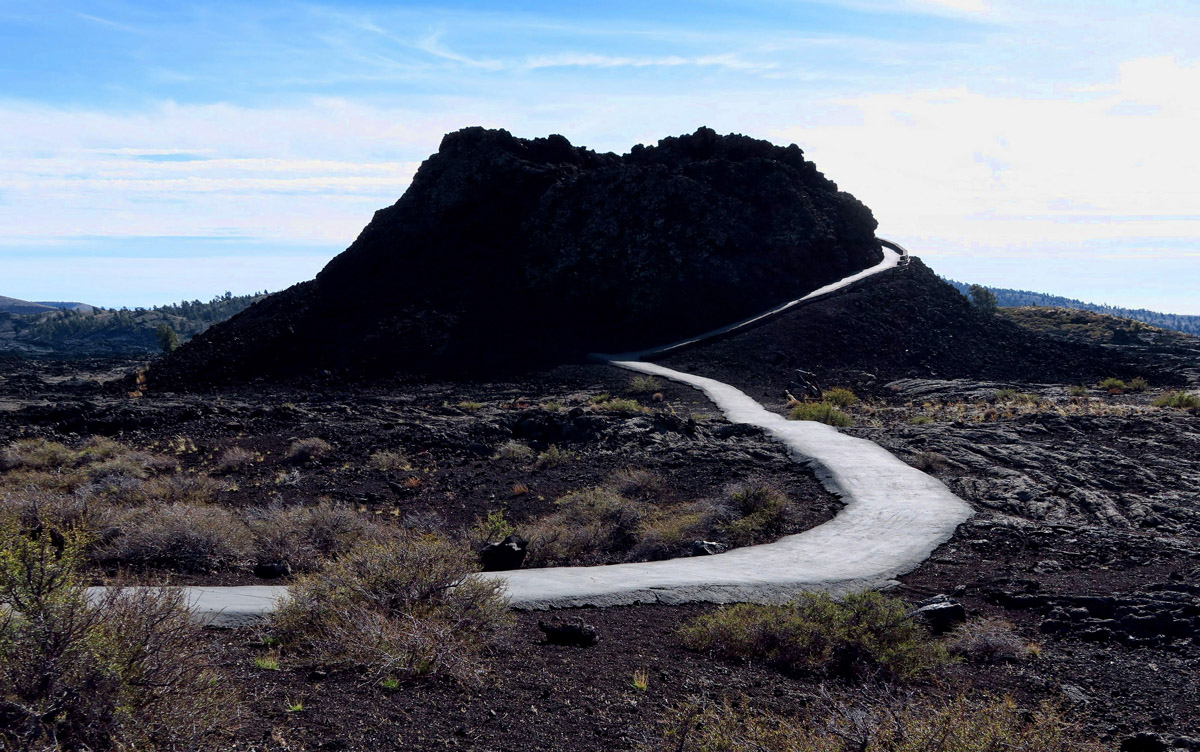 A “spatter cone,” or mini volcano made from blobs of molten lava lobbed into the air. 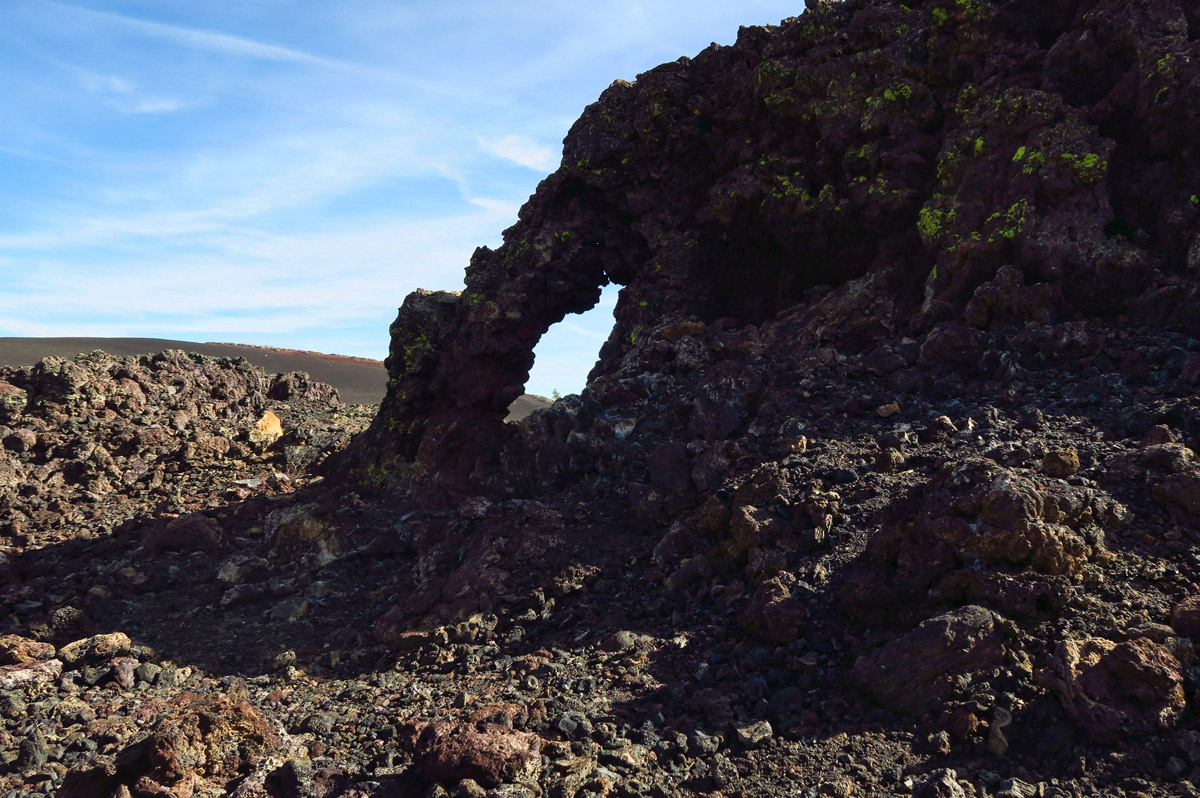 Arch on the side of one of the splatter cones. 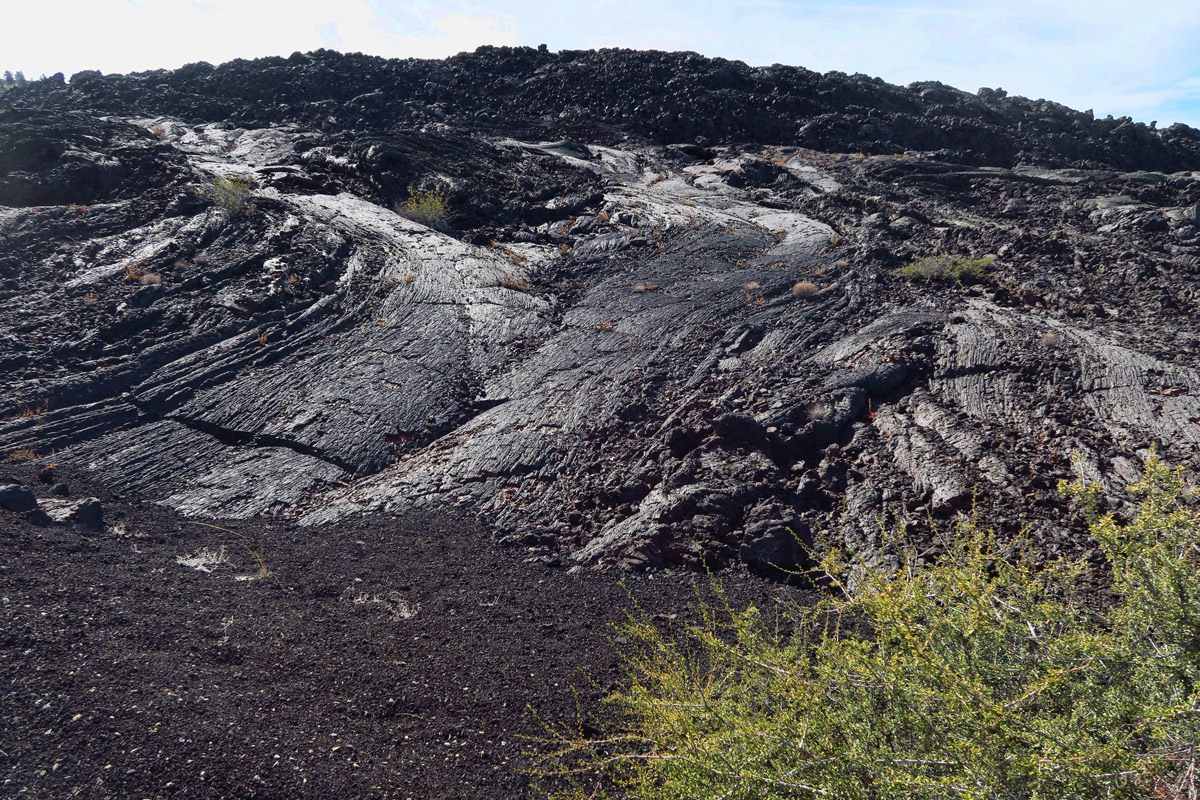 The “cascades,” formed when pāhoehoe lava flowed around `a`a lava. 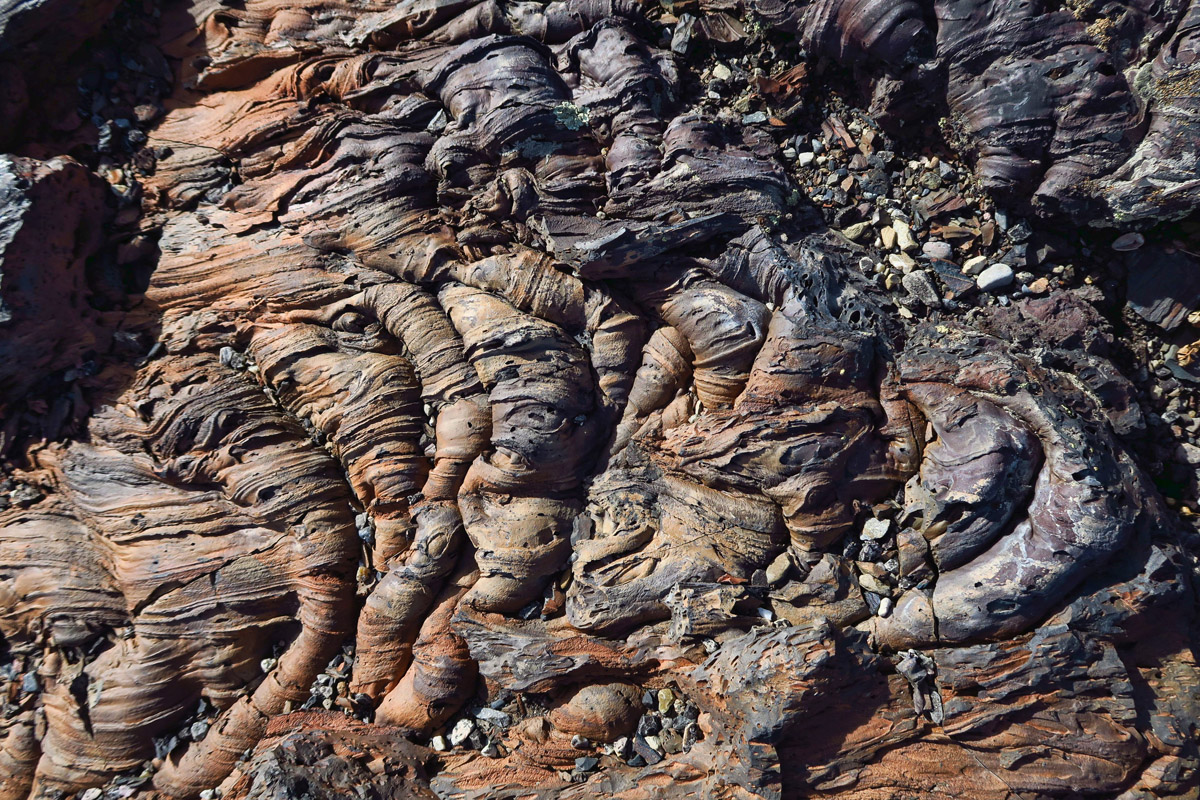 I’ve visited many lava lands in the past…Hawaii, Guatemala, Naples and Sicily, but there has always been a visible volcano in the surrounding area, which begs the question, “If all this is volcanic, then where’s the volcano?”  Craters of the Moon is even more unique, as it is surrounded by rolling hills, but no iconic volcanic peaks.  Just a lot of spatter cones and cinder cones, lava formations that came up through fissures of the Great Rift.  The 1906 antiquities act described Craters of the Moon to be “a weird and scenic landscape, peculiar to itself.”

A scenic seven-mile loop road leads out from the Lava Flow Campground, with interpretive walks and kiosks along the way.   We make the entire loop and all its stops, but none so fun as the “caves.”   This requires a permit…you must first to go the Visitor Center and solemnly swear that you have not been in a cave since 2005, and if you have been, you are not wearing the same clothing, carrying the same backpack, camera, etc.  And if you are, it must be disinfected.  It’s a screening procedure to prevent White Nose Syndrome, a fungus resulting in a fatal condition that’s killed millions of bats since discovery in 2006.  This white fungus grows on the nose and wings of hibernating bats, and can be transmitted on shoes and gear from cave to cave. 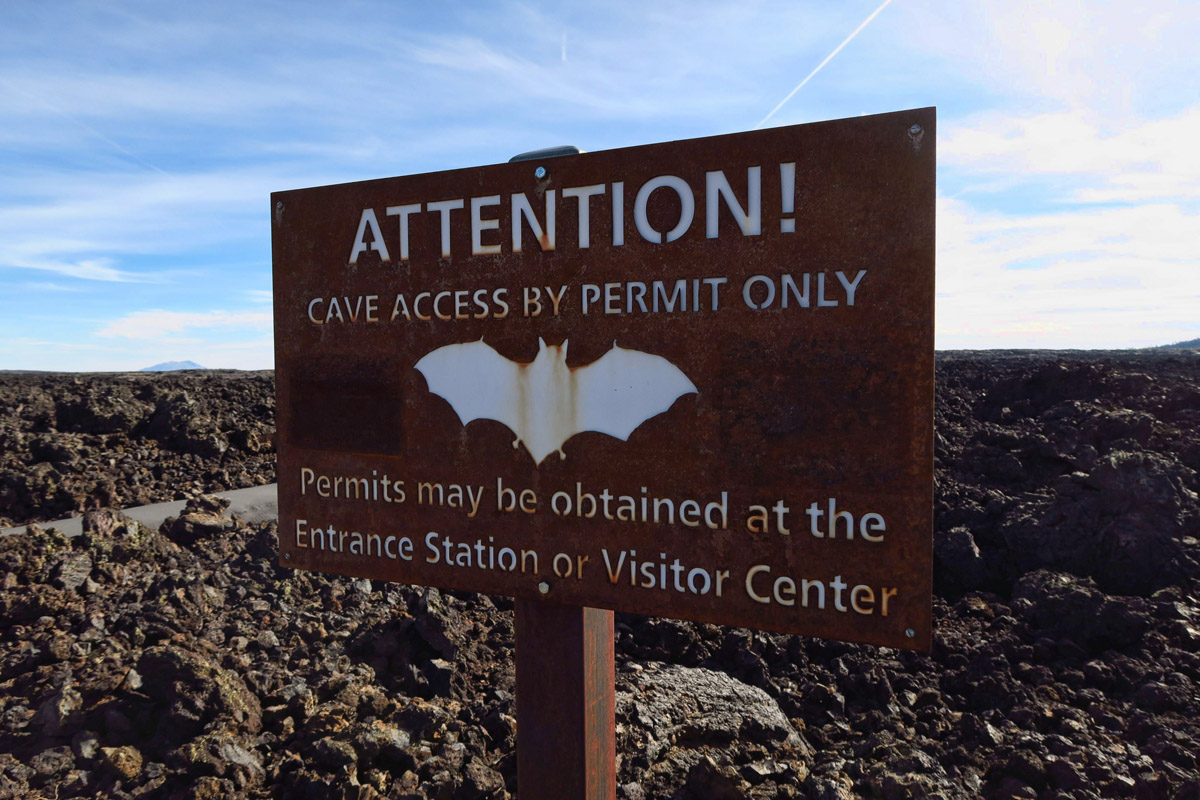 Permits are easy to obtain. Just have to “come clean.” 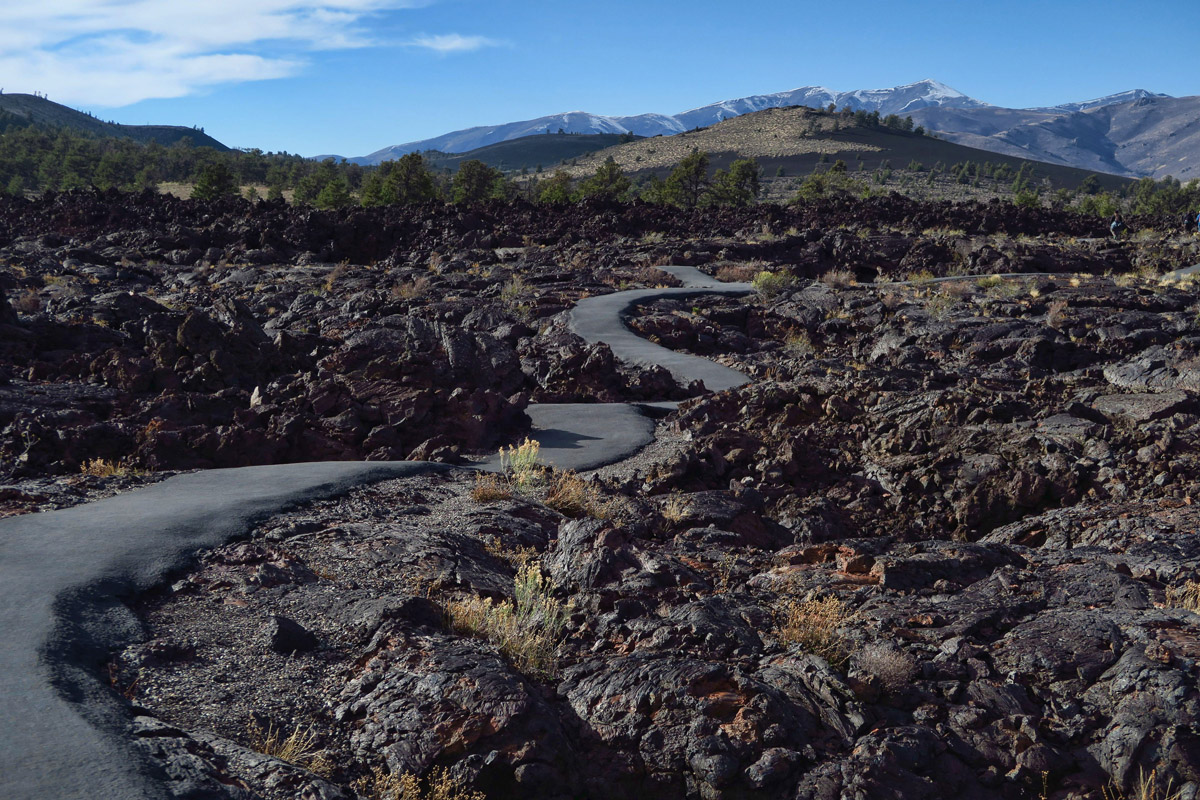 Grateful for whomever laid out these great trails! 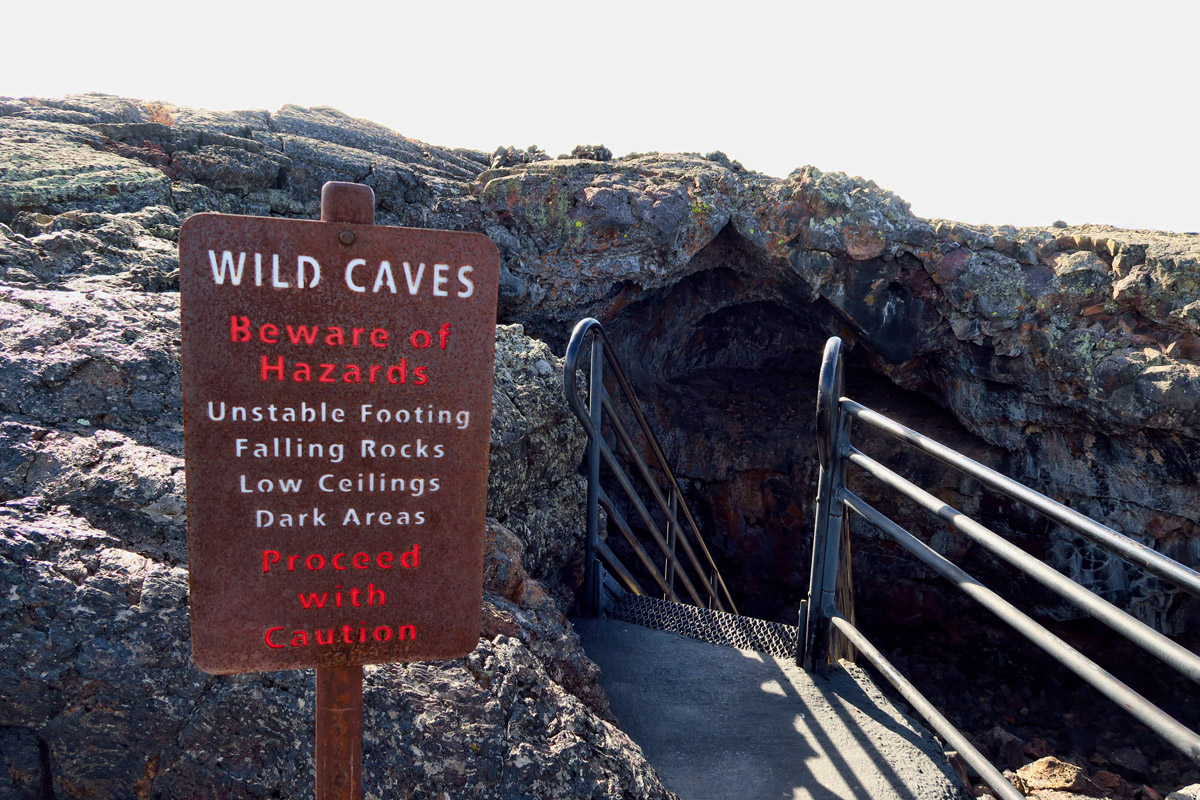 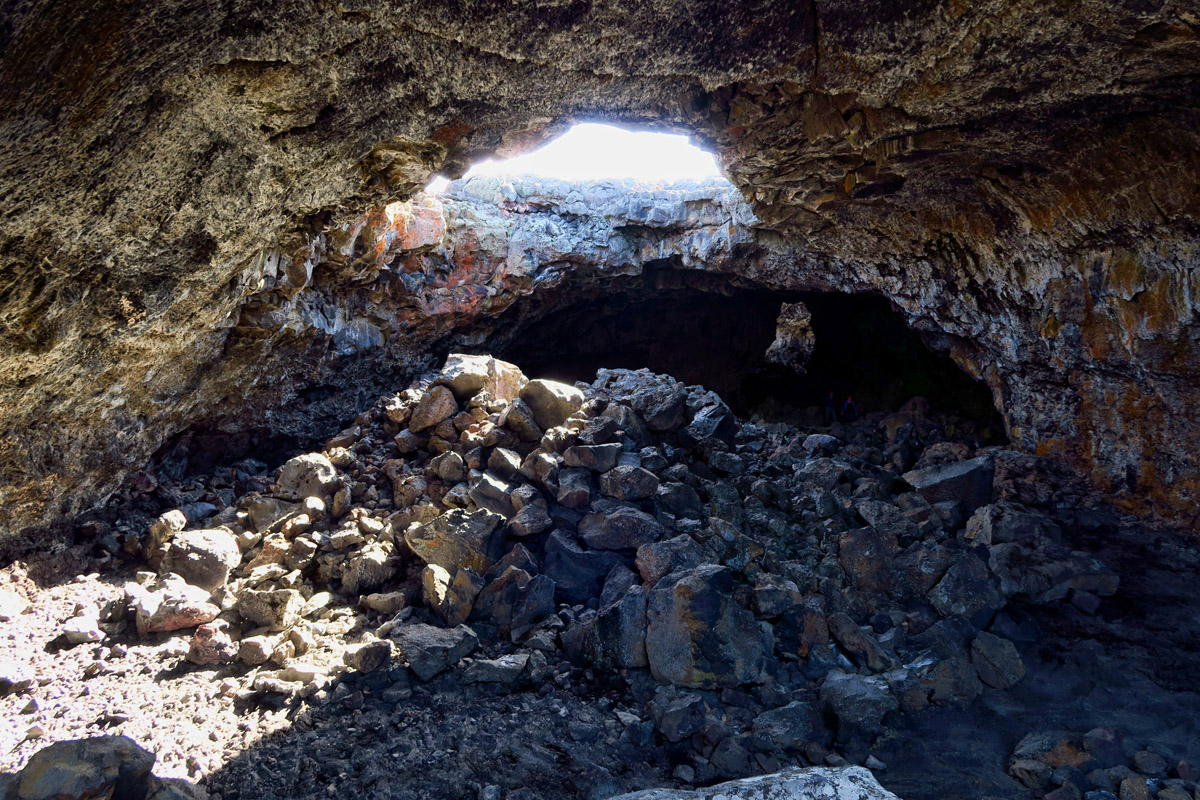 The Indian Tunnel cave is huge! Thirty ft high, 50 ft wide, and 800 ft long. It requires a bit of scrambling, but it’s possible to traverse the length, exiting out a different hole than you entered. 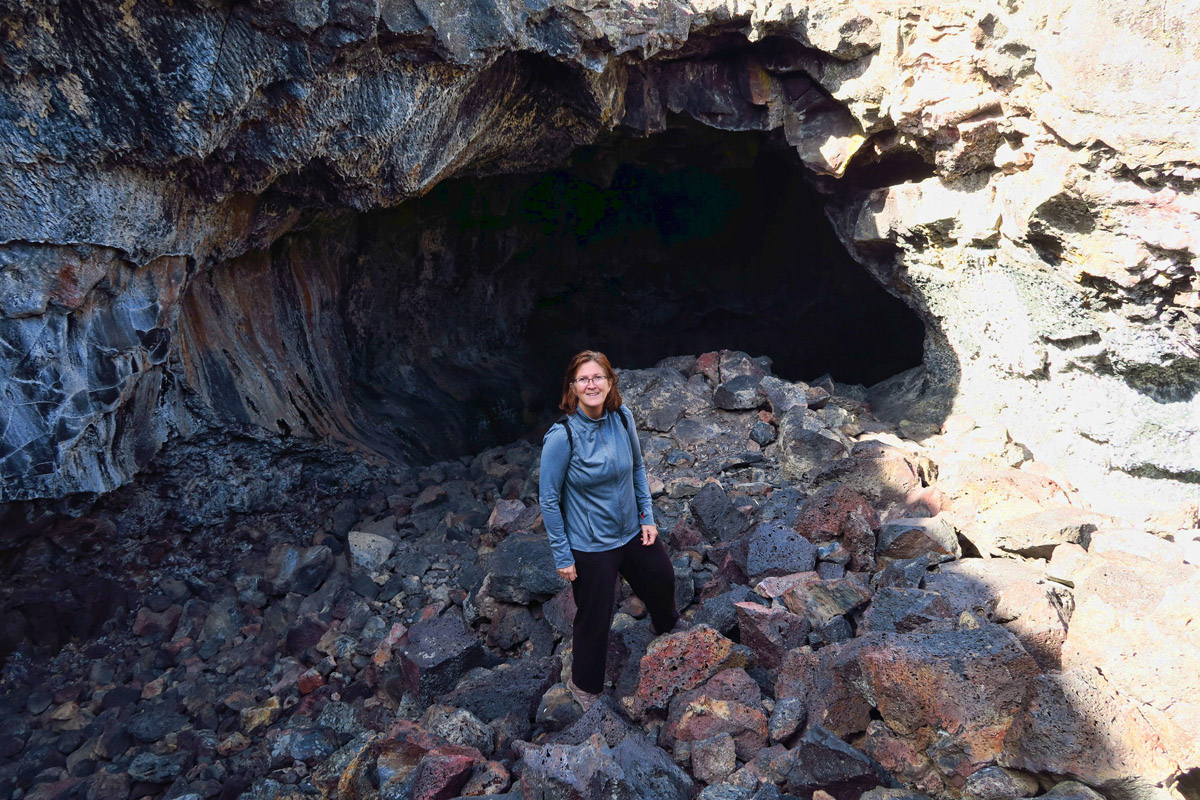 Once we pass the screening, we’re off to explore the Caves Trail.  There are four caves, or lava tubes, open for exploration.  Two are smaller, but two afford the opportunity to enter into one hole of the tube and exit the other.   At the mid point, total darkness ensues, so flashlights are required. 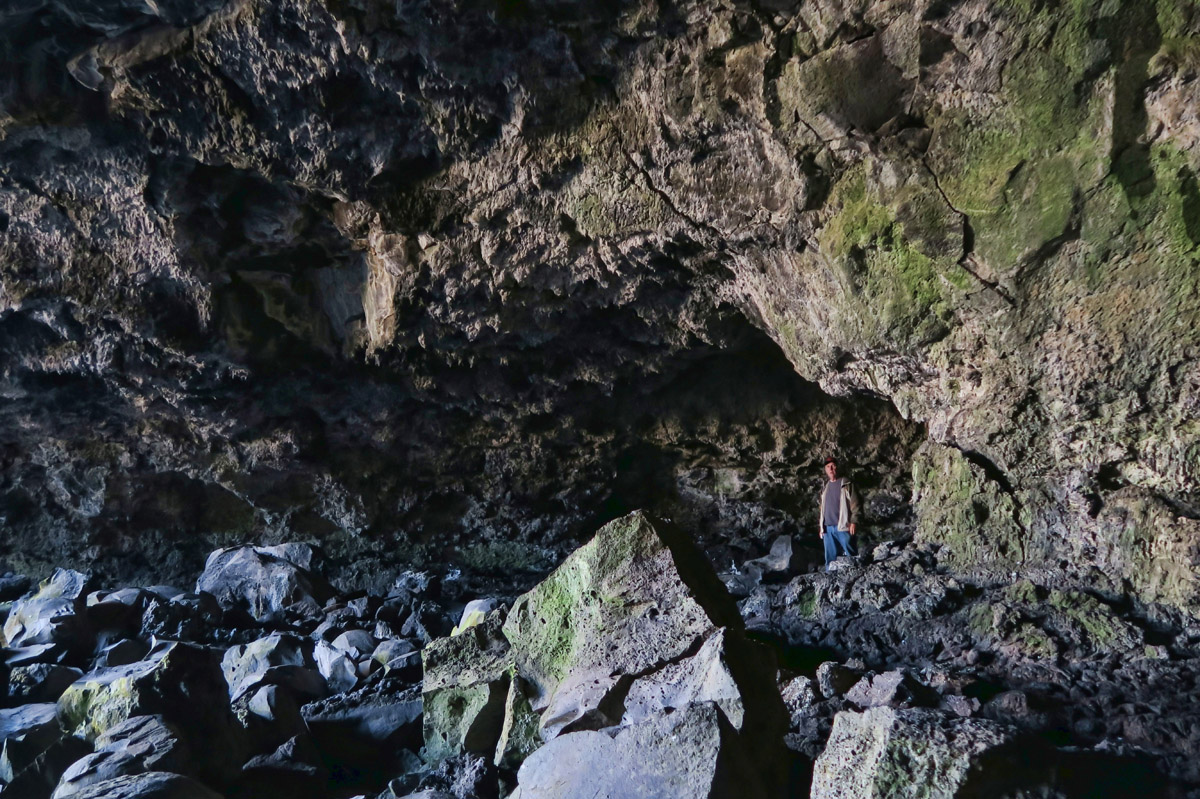 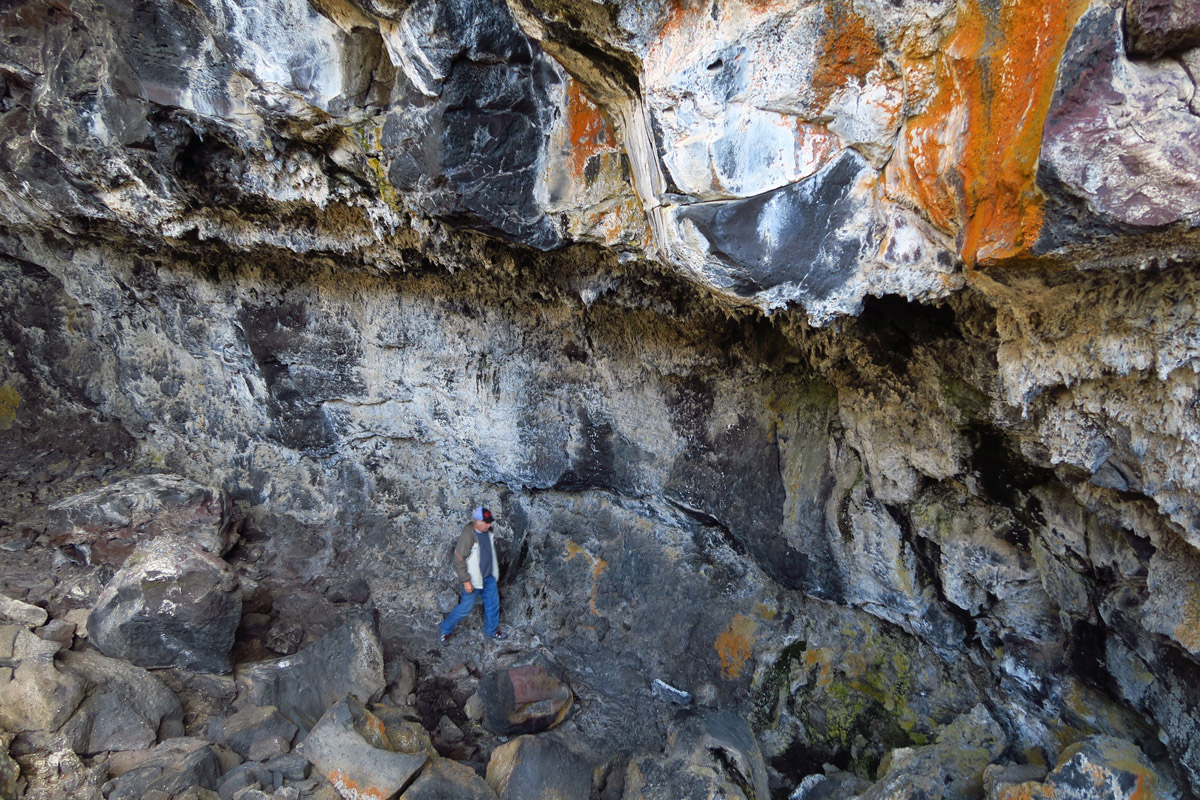 Don doesn’t share my passion for hiking, but he is a good sport to explore the caves with me. 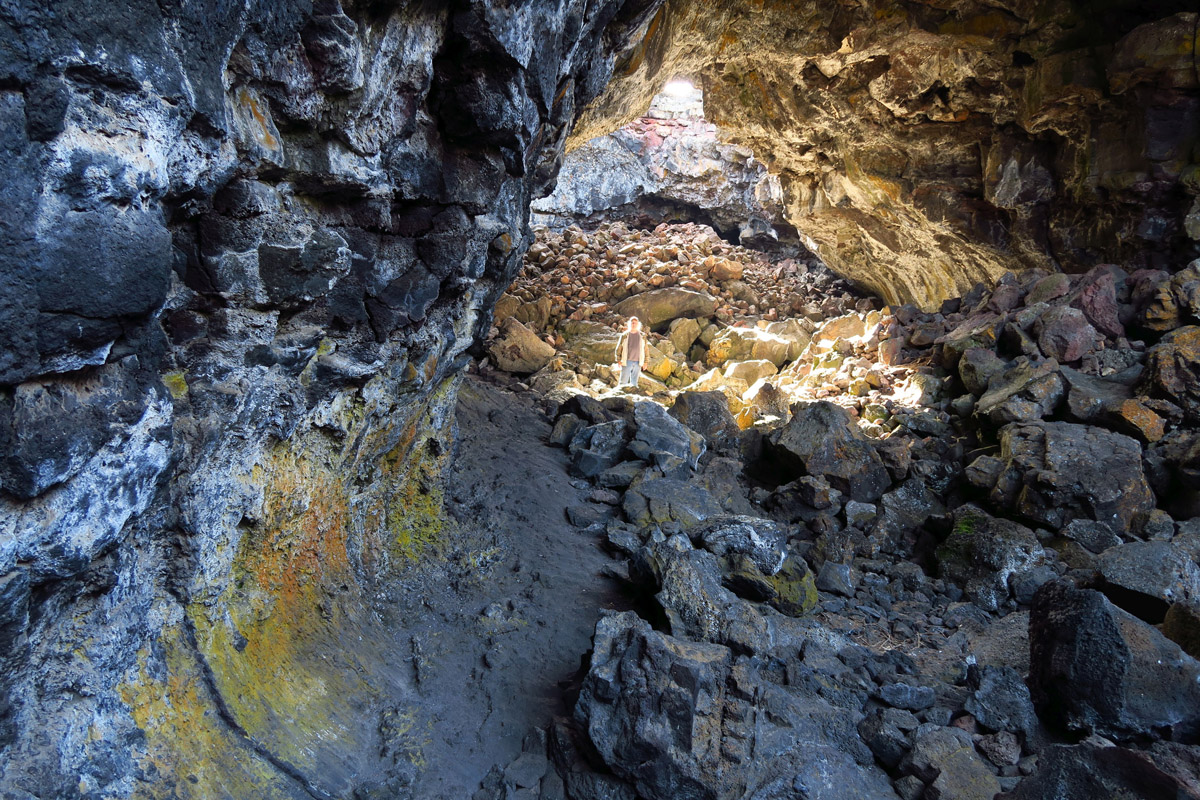 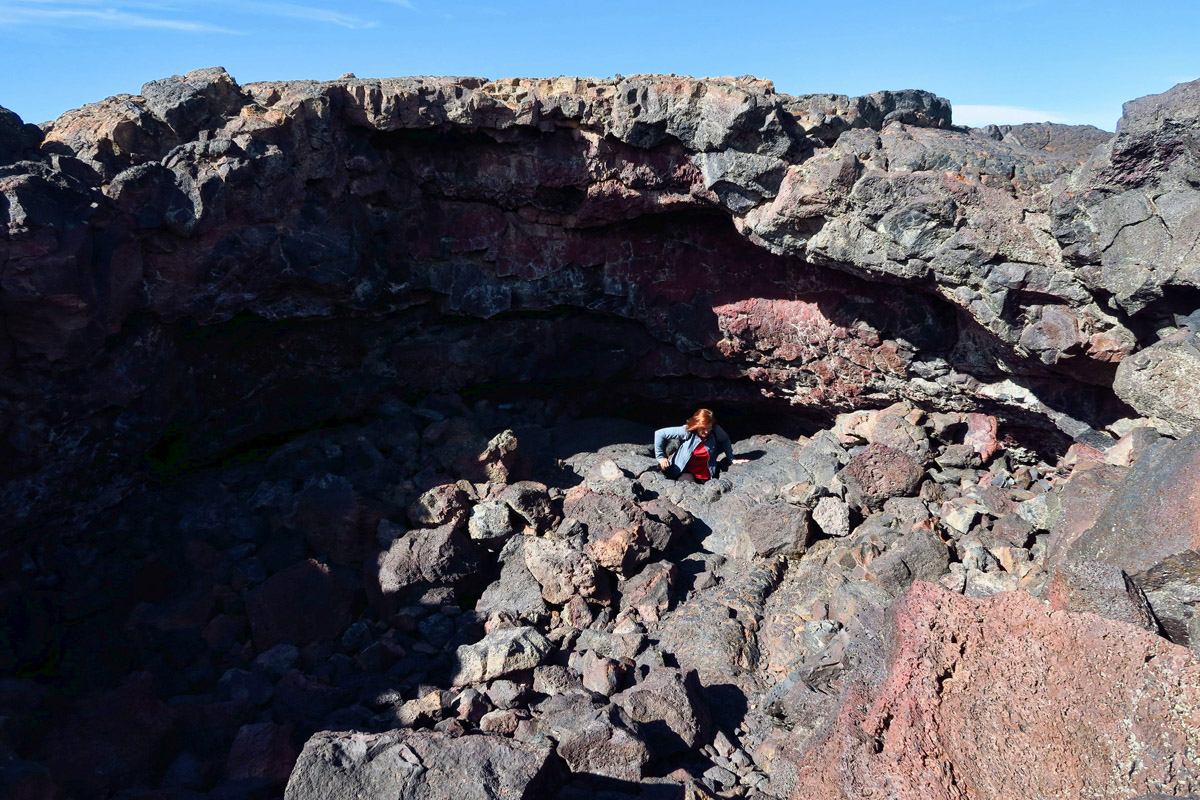 Exiting one of the lava tubes…”Come into the light.” 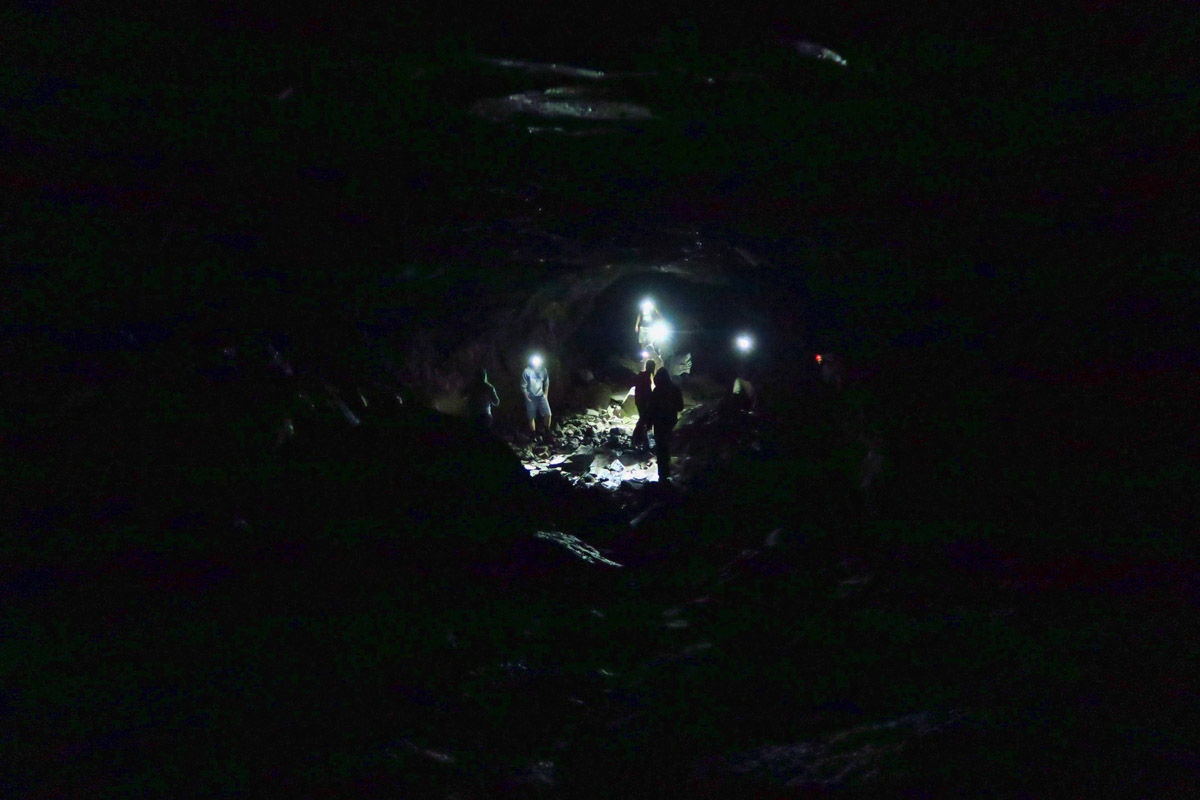 As one who has enjoyed underwater caving on over 100 dives, I love the feeling of exploration and mystery of going some place where I really don’t belong….a Stranger in a Strange Land. 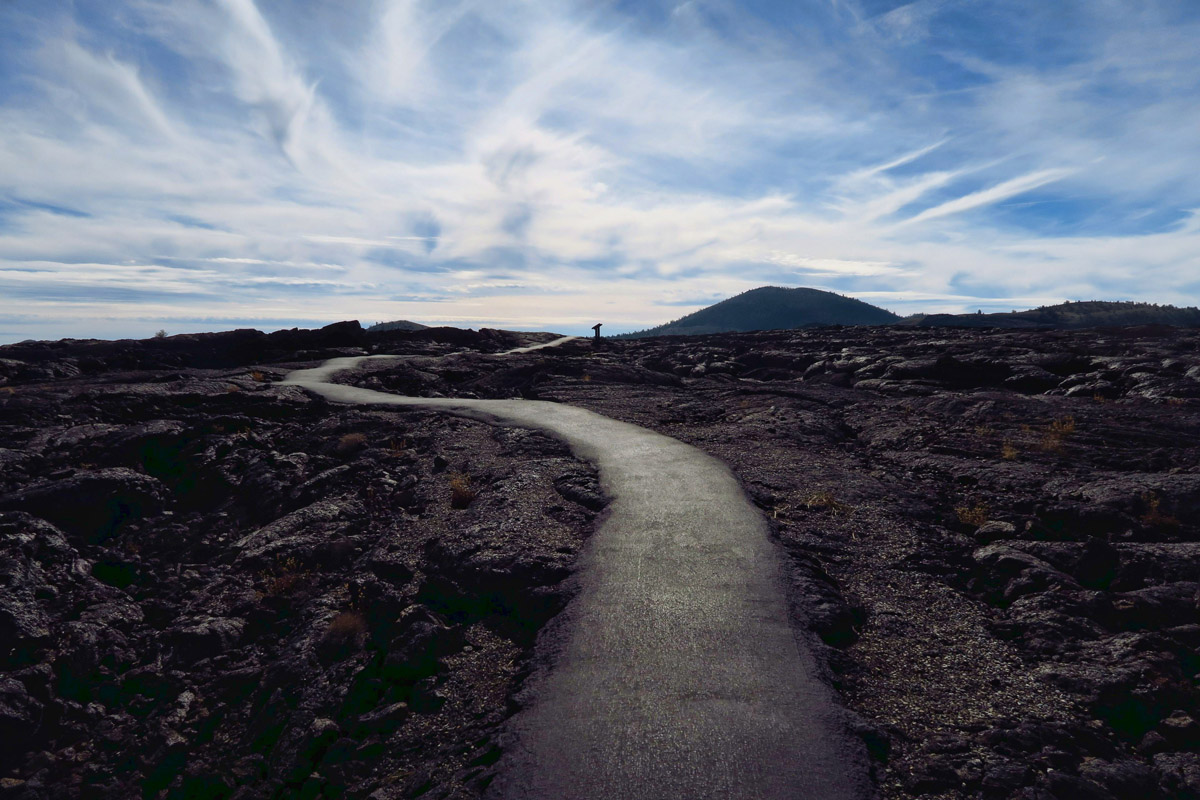 “Well, I don’t exactly know
What’s going on in the world today
Don’t know what there is to say
About the way the people are treating
Each other, not like brothers

Stop the money chase
Lay back, relax
Get back on the human track
Stop racing toward oblivion
Oh, such a sad, sad state we’re in
And that’s a thing 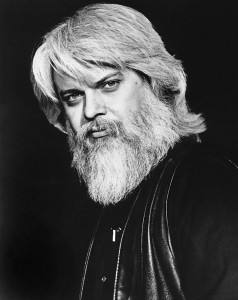 RIP, Leon, and thanks for the many memories.

14 thoughts on “Stranger in a Strange Land”