Don and I part ways temporarily after Craters of the Moon.  I am headed to Boise to see good friends known on this blog as “Tom the Awning Fixer” and his lovely bride Corinne, who graciously hosted me for a bit of Boise driveway surfing and a fabulous dinner.  (No photos, as I all but changed the names to protect the innocent.)  Don went on to wander in the forest, trying to prove J. R. R. Tolkien’s theory that “Not all who wander are lost.”  Or are they?

We meet back up in Twin Falls, a place for which I have done zero research.  So imagine my shock to be driving along Hwy 93, when I unexpectedly cross the Perrine Bridge over the Snake River Canyon.  Of course!  How could I have forgotten Evel Kneivel’s unsuccessful attempt to jump the canyon in his steam-powered “Sky-cycle” during my college days?  I also missed the fact that Evel Kneivel earned the Guinness Book of World Records distinction of having more broken bones in a lifetime than any other human.   A Darwin study in the making if there ever was one. 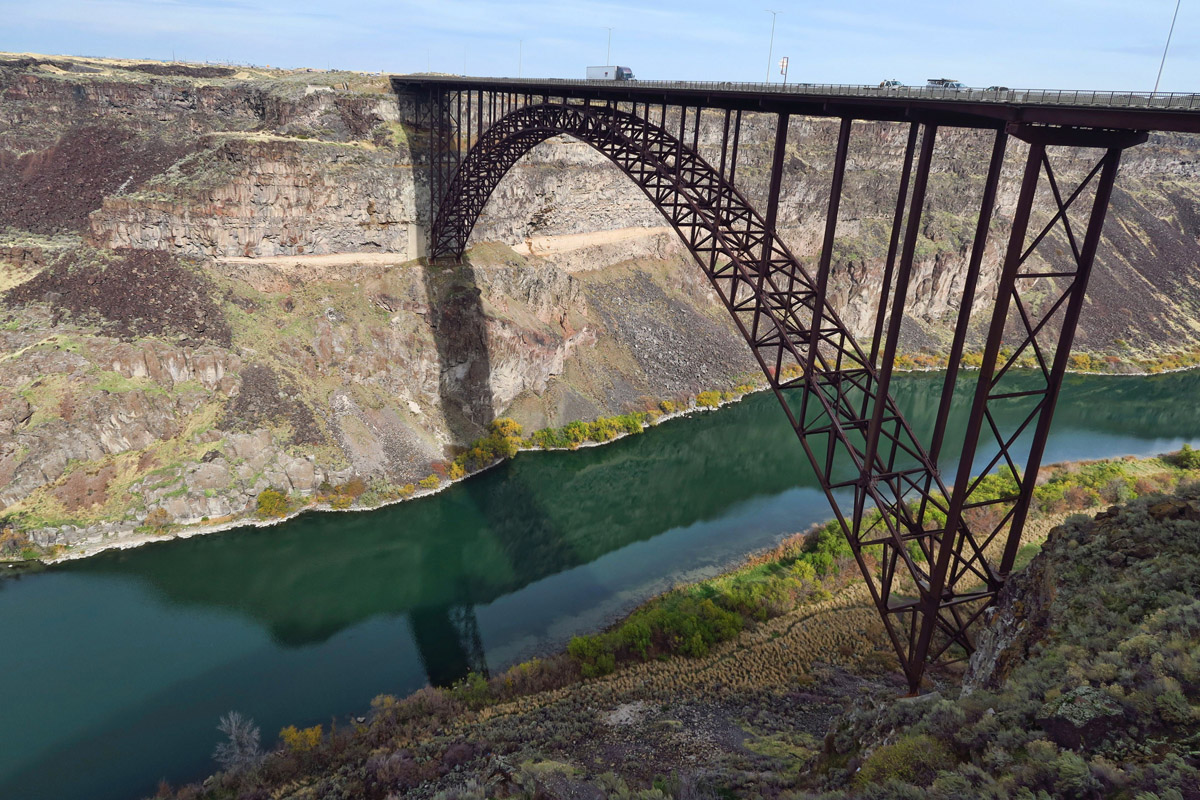 Perrine Bridge, original built in 1927 was the highest in the world. Replaced in 1976 with the current version. 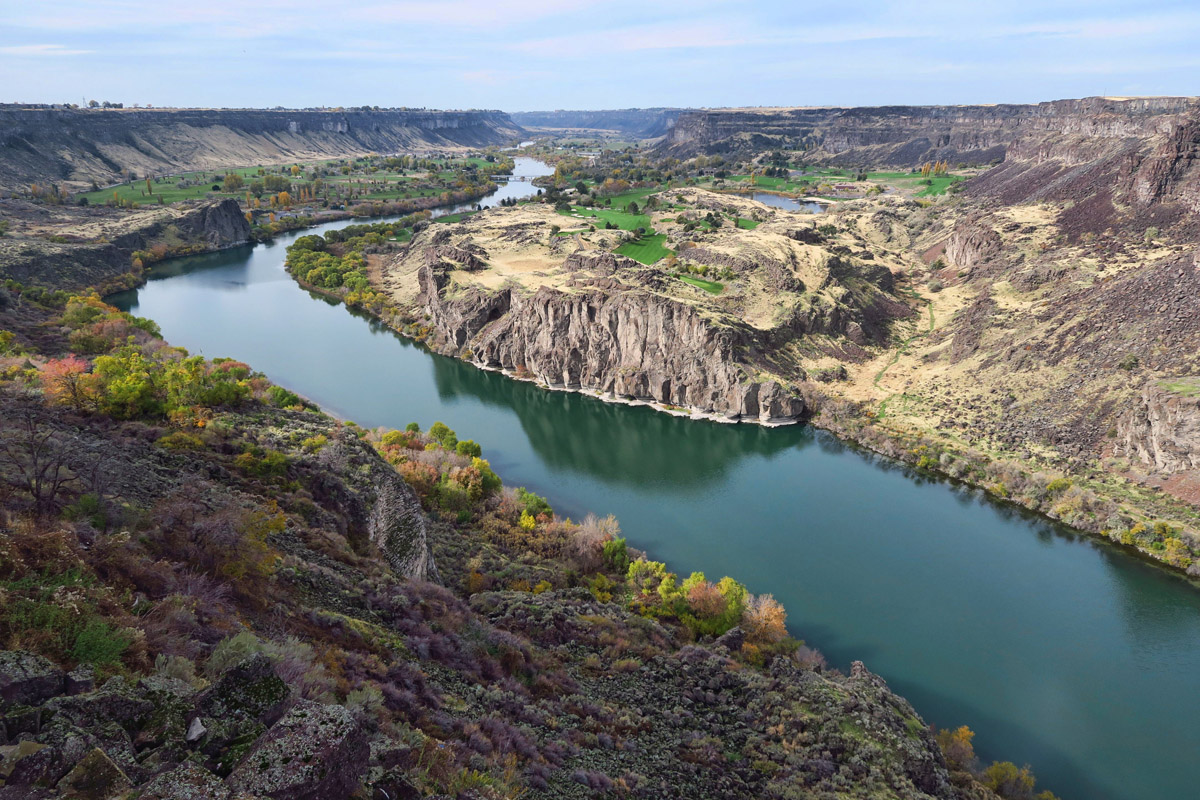 View of the Snake River Canyon from the Visitor Center overlook. 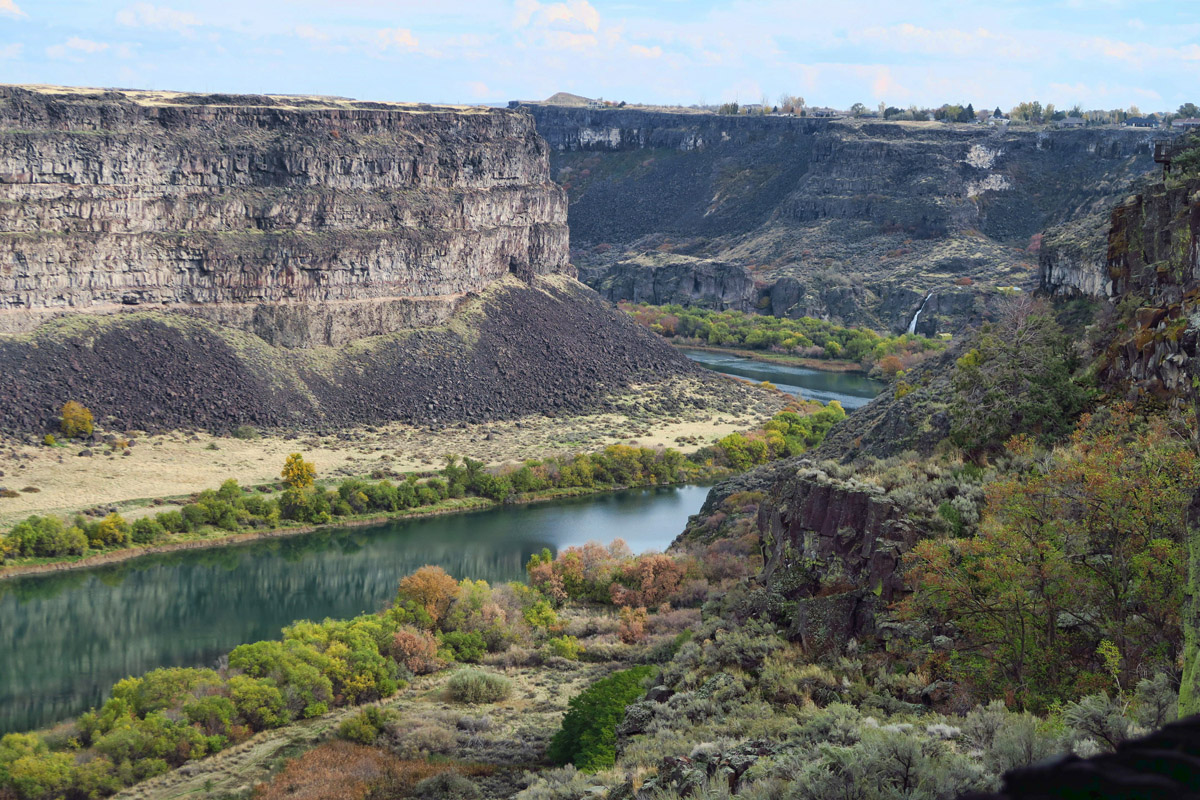 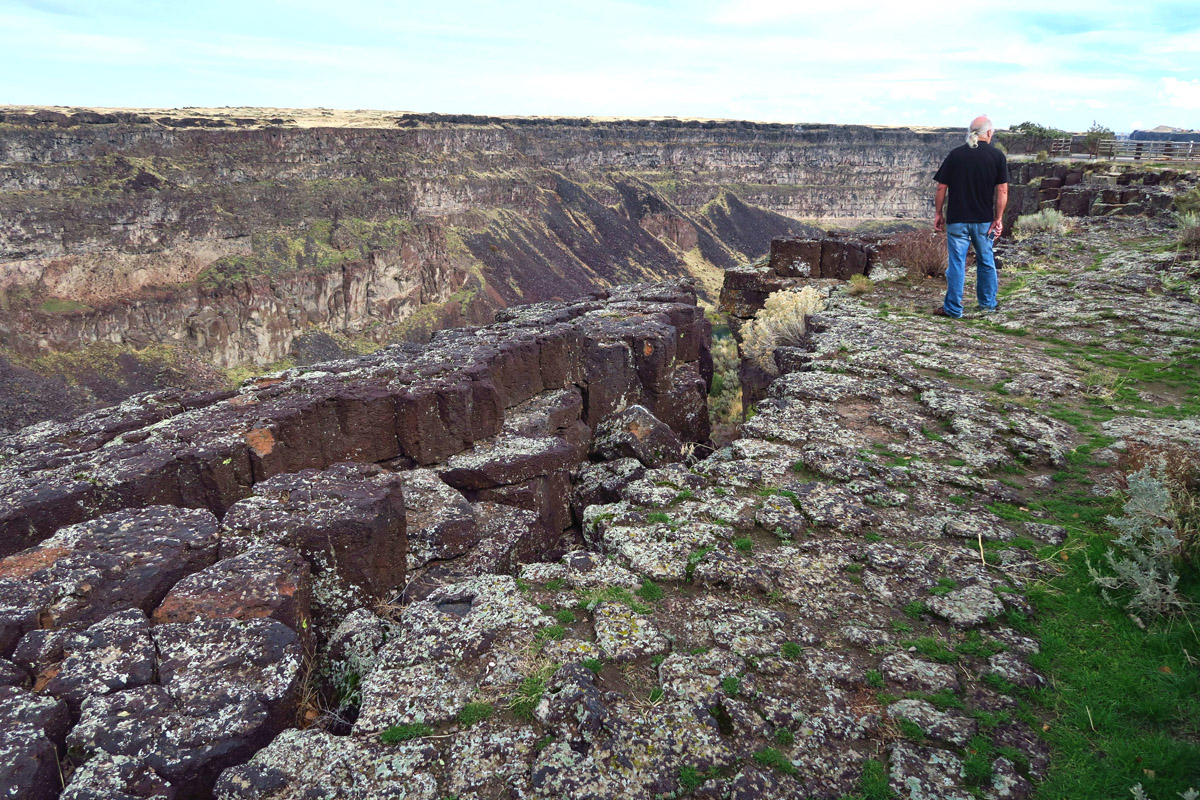 There is a nice multi-use trail along the river. From the paved trail, you can walk out to the edge. Odd that many of the overlooks have no railing.

How could I have also missed that the fact that the Perrine bridge is the only structure in the country where BASE jumping is allowed without a permit?  (BASE, an acronym for Building, Antenna, Span, and Earth, jumping with a parachute from a static structure.)  Having tried sky diving, bungee jumping, hang gliding, parasailing, and glider planing, I drew the line at BASE jumping.  Perhaps if I were a little younger, lest I end up like Evel. 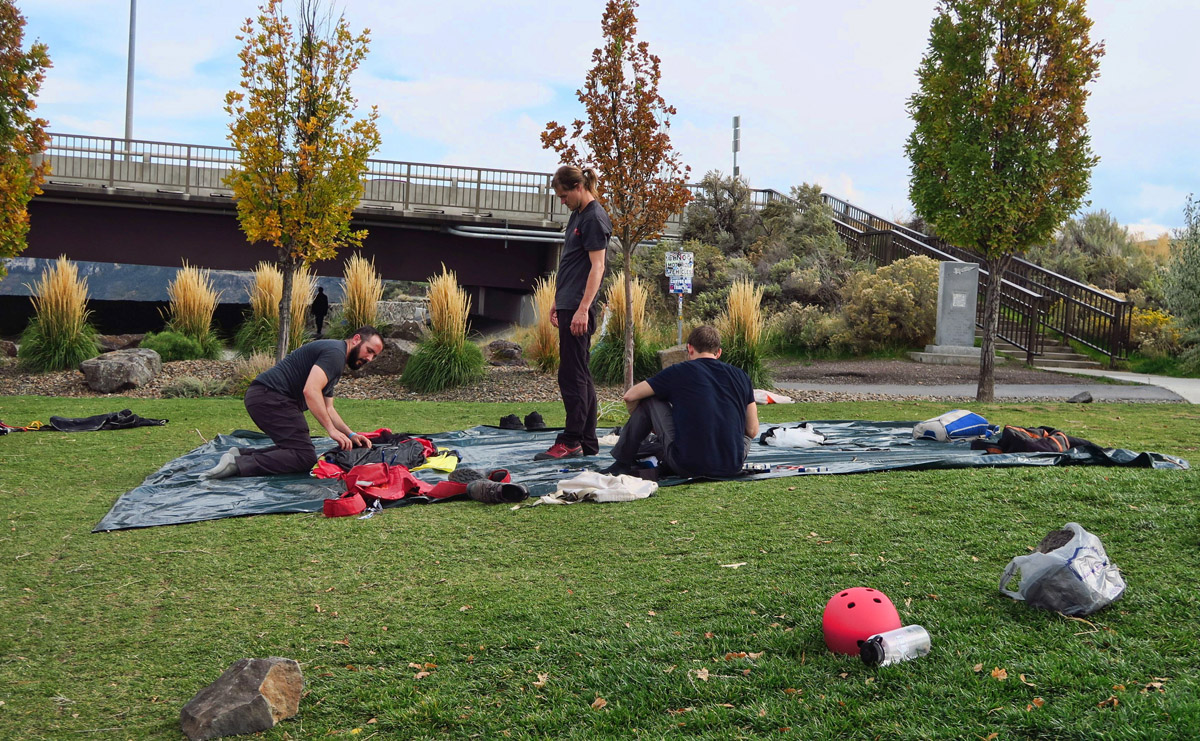 Packing their chutes for the jump. 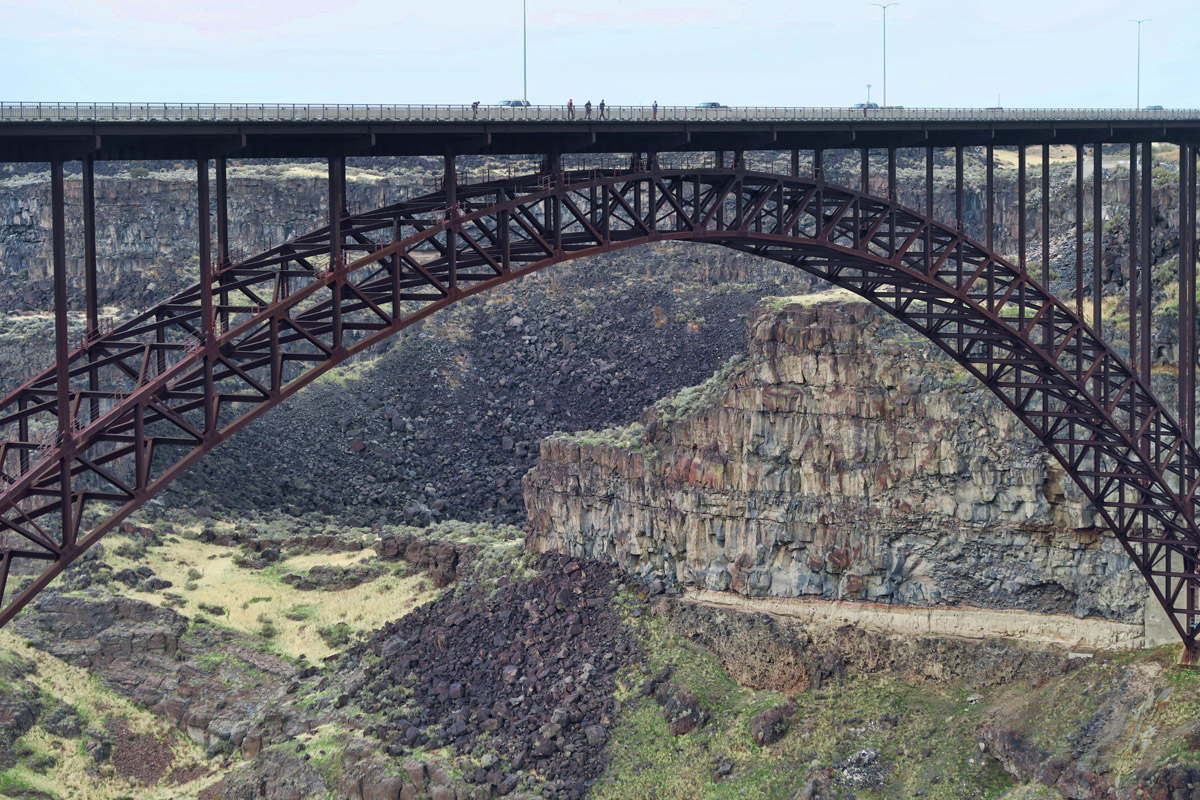 BASE jumpers walk out to center of the bridge. 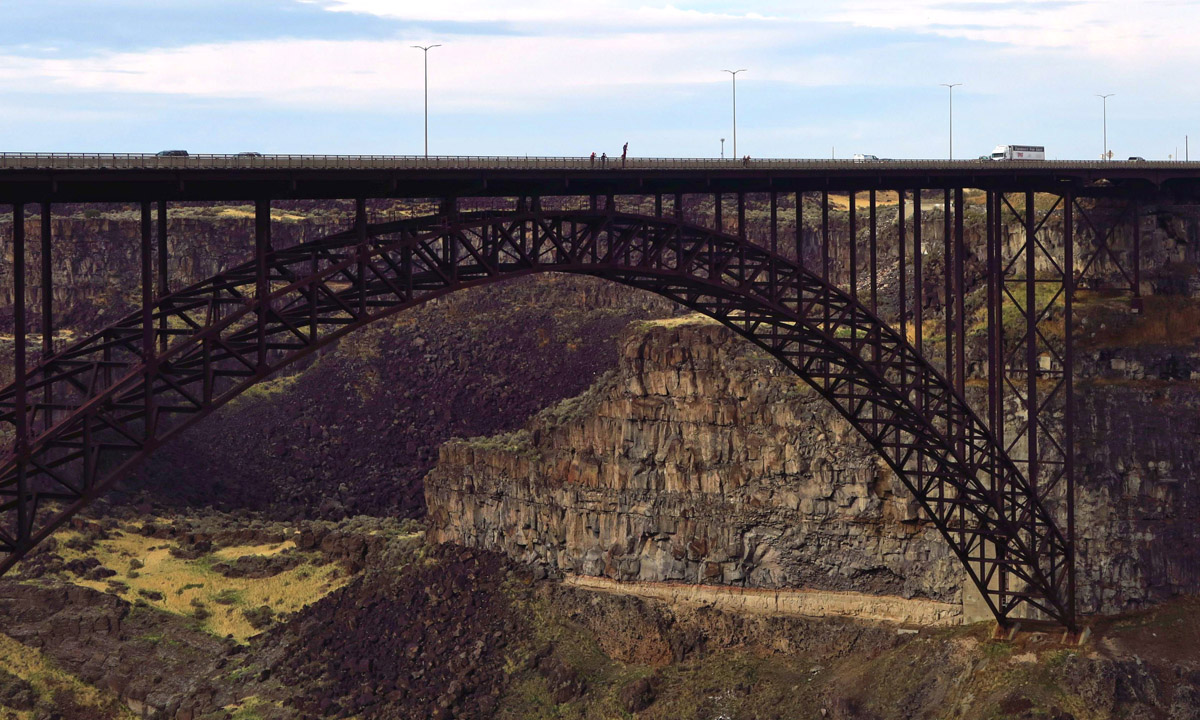 Note one stands on bridge railing for free-fall. It’s 486 ft down to the river.

Don and I set out to do laundry, but I suggest first that we backtrack to the Snake River Visitor Center for some photos from the overlook.  There, we meet a nice young man from South Africa, packing his parachute on the grounds of the Visitor Center.  I had no idea BASE jumping was allowed, so we quiz him on where and how he plans to use this chute.  He tells us all about the jumps that are about to take place from the Perrine Bridge, and gives us suggestions for the best vantage point to view them.  We watch five different jumpers leap from the railing of the bridge.   Only a 486 ft drop to the river, takes mere seconds to drift down to their landing zone.  That’s a lot of effort for a five-second thrill, but fun to watch them float to their designated target, nonetheless. 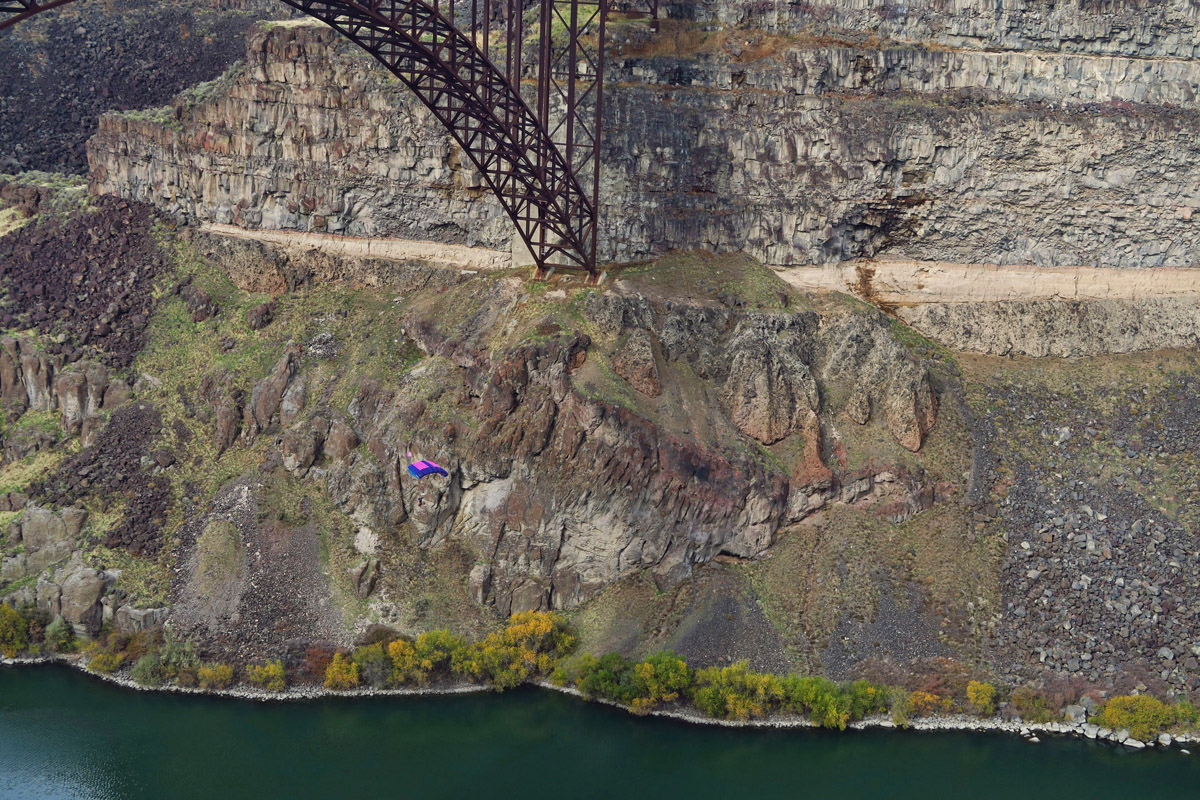 Note blue and pink chute slightly to the left of center. 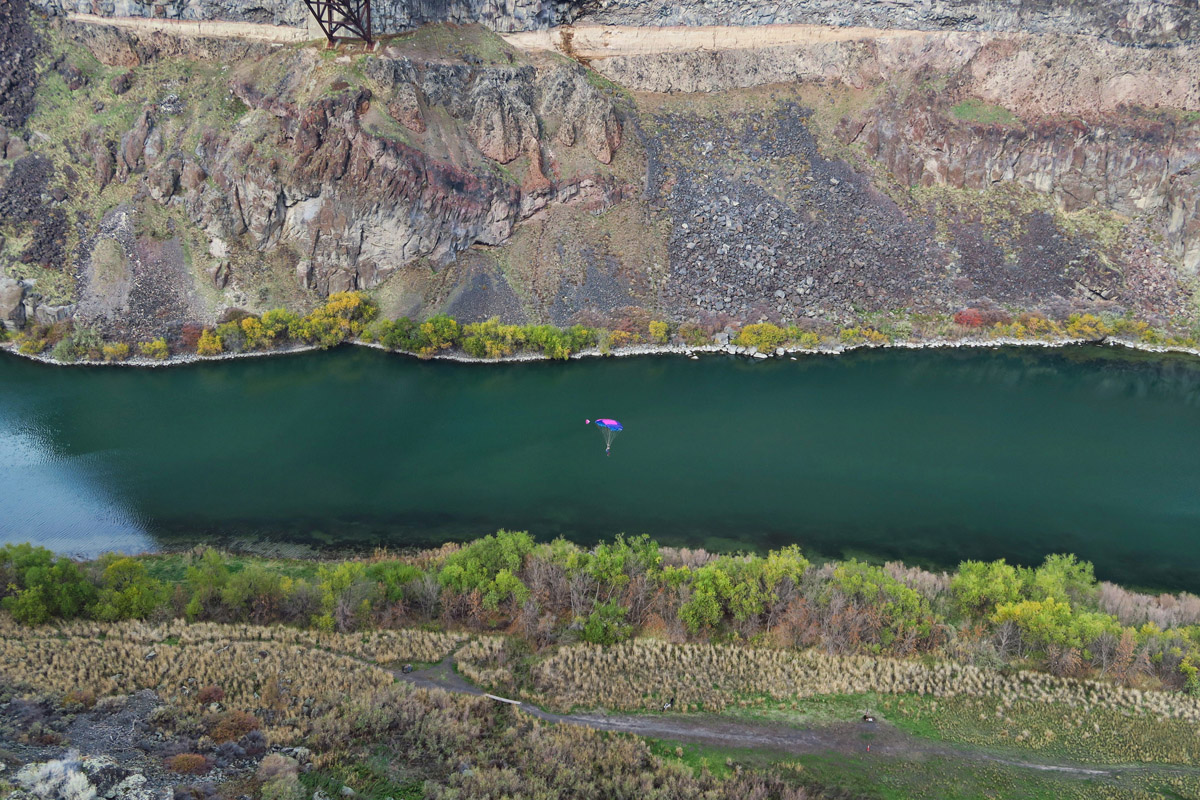 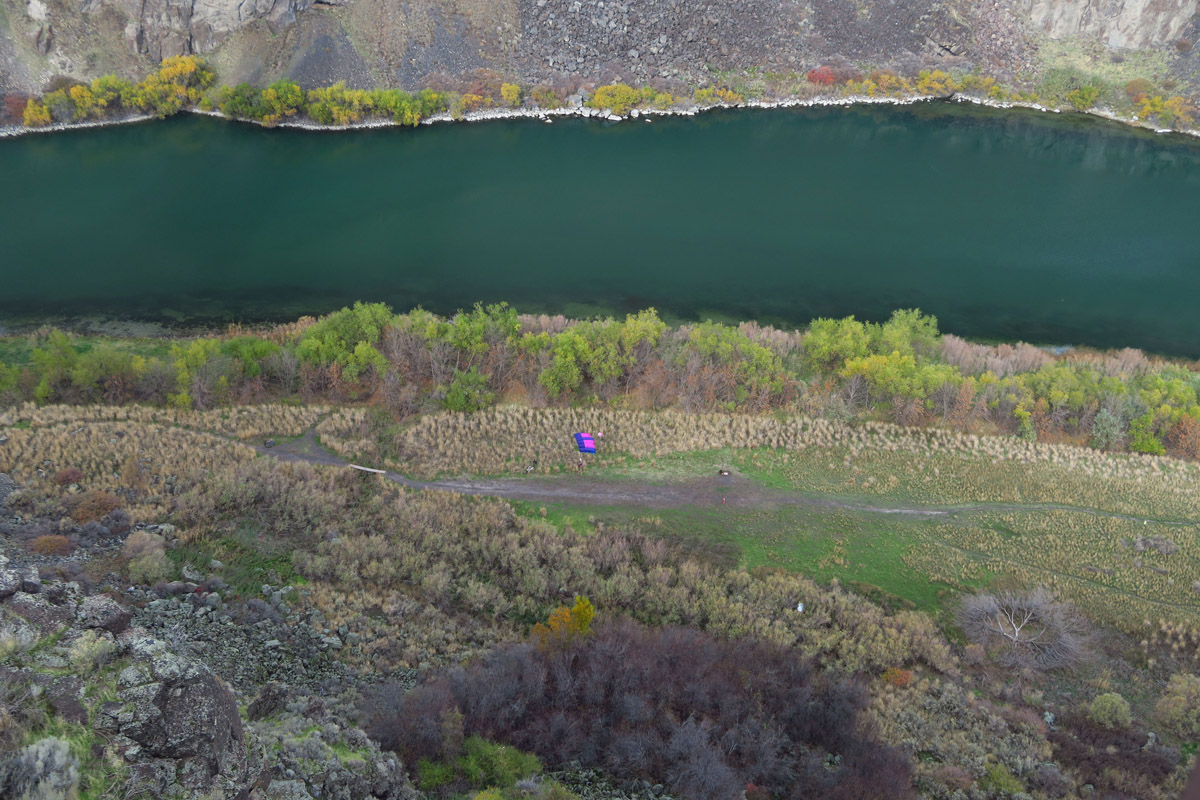 Three out of four land near their target, while one drifts over toward the river and lands in the trees. 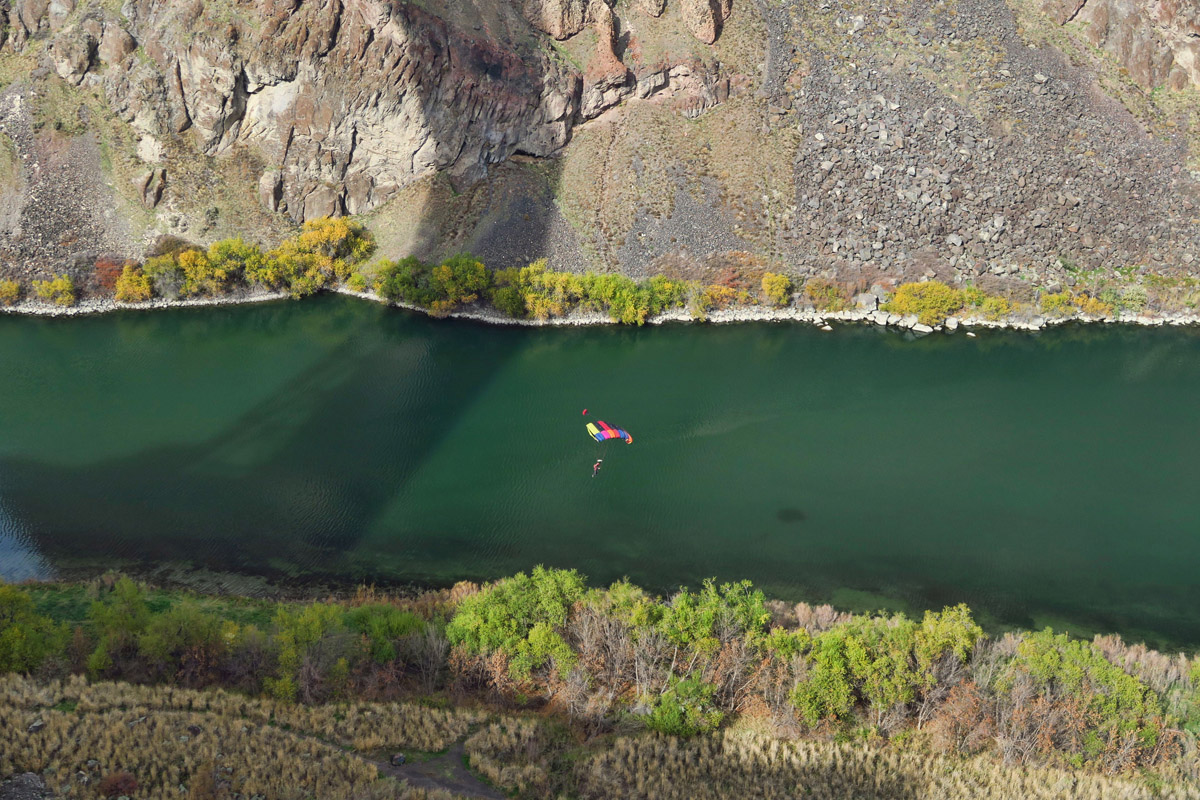 In effort to prolong laundry chores as long as possible, we opt to keep exploring.  On the advice of the helpful volunteer at the Snake River Canyon Visitor Center, we continue on up the Snake River to Shoshone Falls, known as “Niagara of the West.” At 212 ft, the falls are actually 45 ft higher than Niagara Falls.  Even though the flow rate is diminished in the fall months, it’s still an impressive sight. 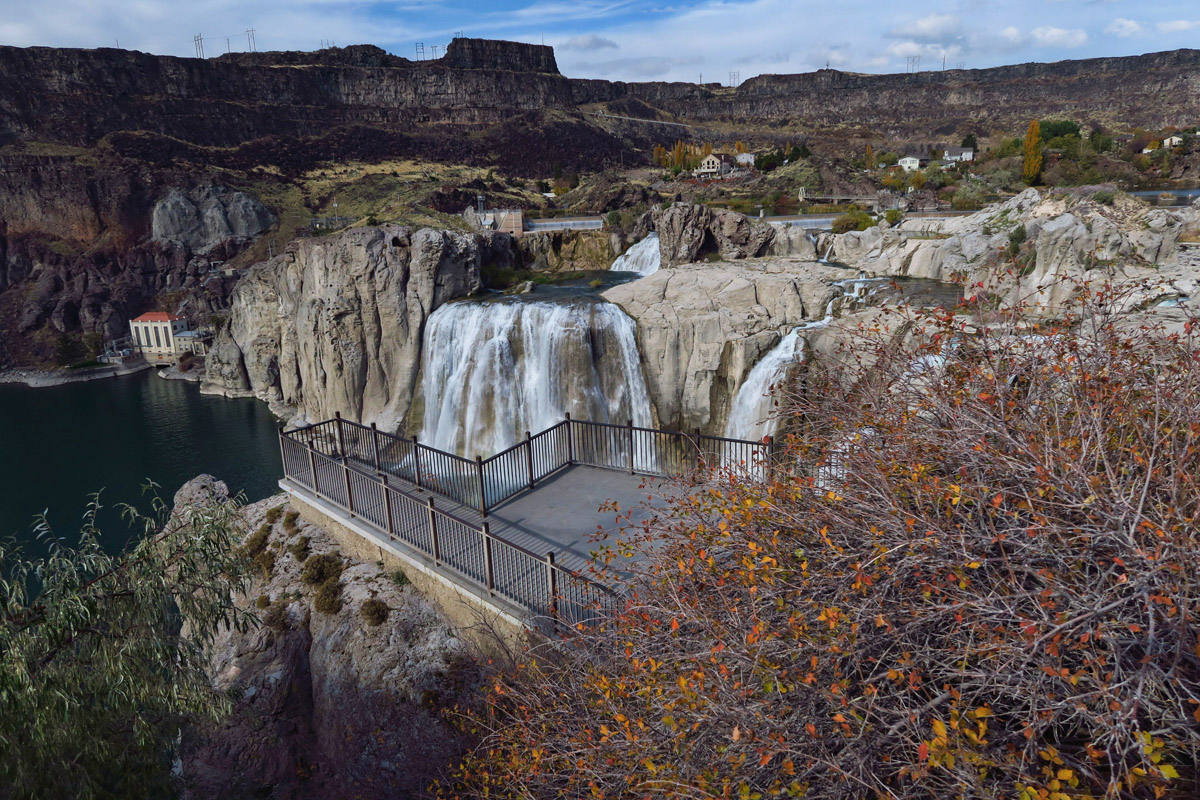 Shoshone Falls, impressive even in its low flow state. 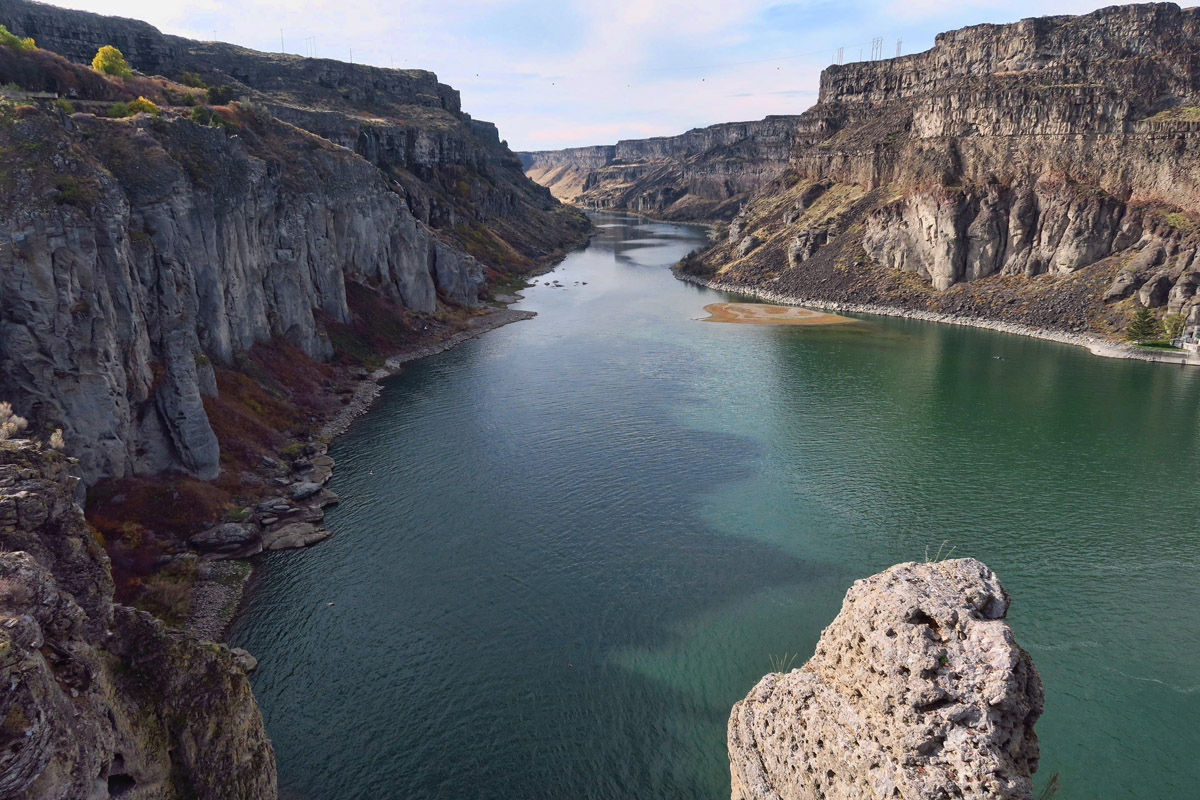 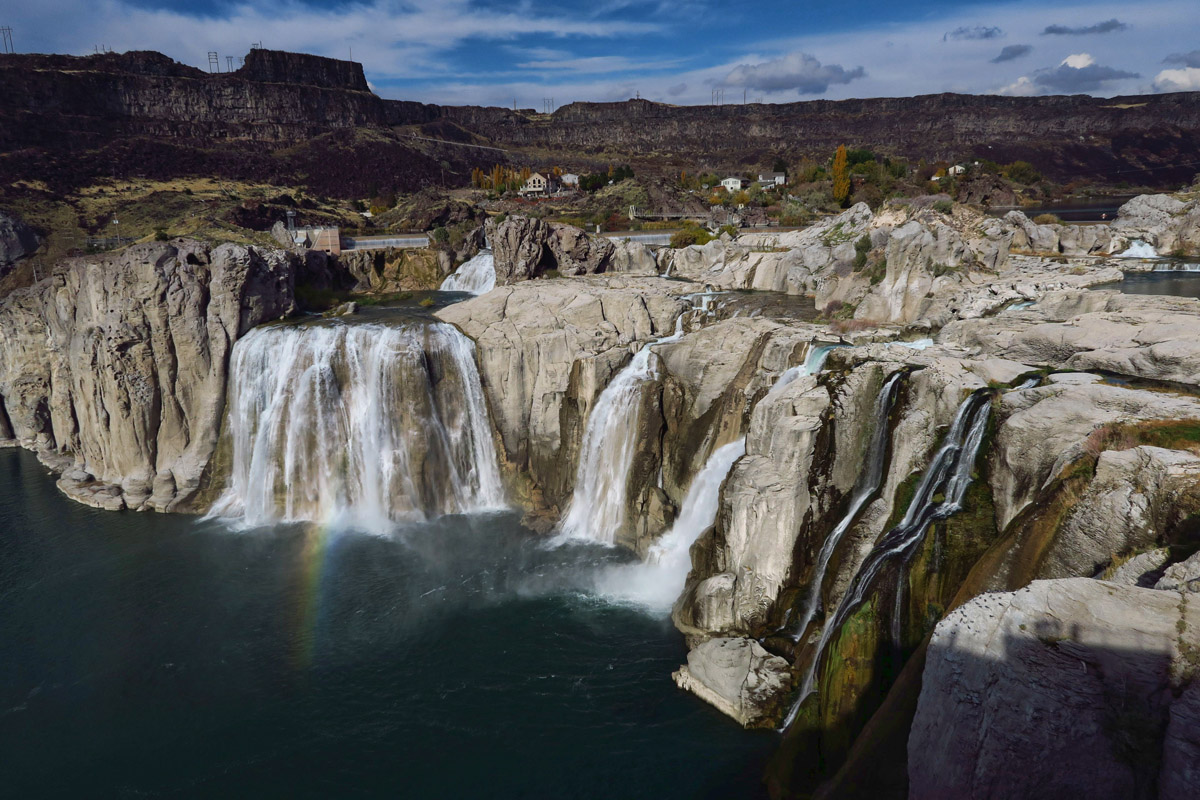 As for Twin Falls, the town’s namesake?  Not so much.  One of the twins has died, while the second is on life support.   As for driving the additional two miles to view it, I would have to say, particularly at this “low flow” time of year, skip it.   It’s all about Shoshone. 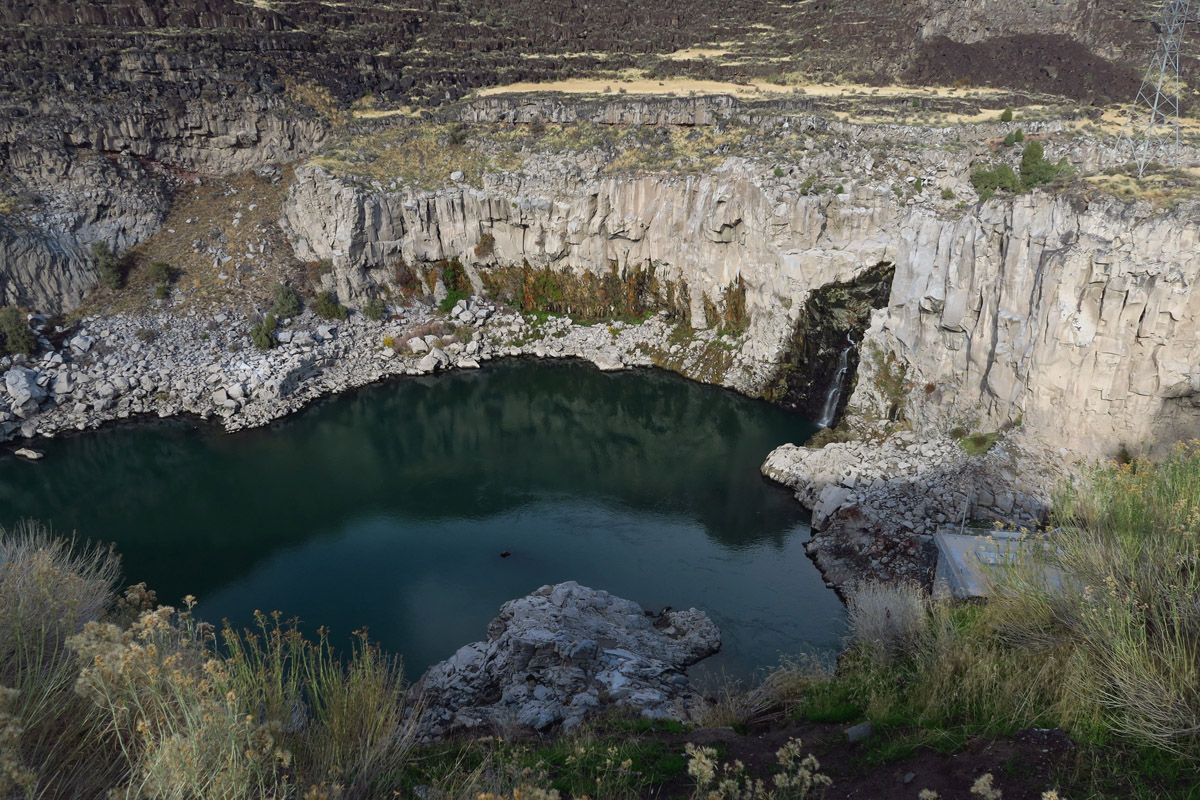 Twin Falls is down to a solo trickle at this time of year. 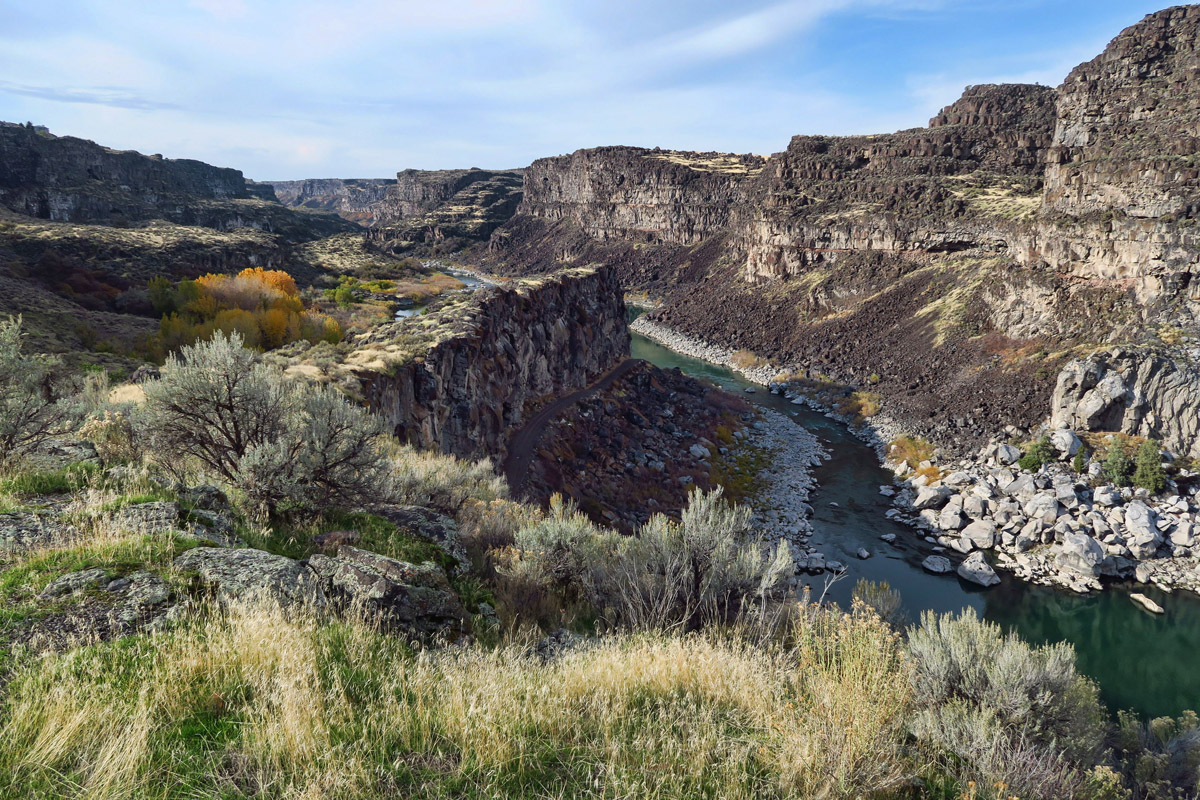 Another place in Twin Falls that I recommend is the quiet, quaint little Rock Creek Park.  Almost impossible to find, but once you land there nestled along a creek in a quiet little gulch, it’s convenient to everything in town, but far removed from the mayhem.  At $15 a night and right off Hwy 93 in route to Nevada, it’s a real “in town” find.  Check Campendium for further tips on how to locate.

After only a day of exploring, eating Pho, and doing laundry, it’s time for Don and me to say our “goodbyes” once again, this time for who knows how long. After two and a half months, three states, many miles, meals and moods of the caravan of our twin RVs, it’s time for me to revive my solo act.  As is always the case when I have to say goodbye to my brother, it’s a weepy moment.  Without question, goodbyes are the hardest part of this nomadic lifestyle for me.  Even more so as the numbers of family members dwindle.  After having suffered two back to back losses in 2015, I find myself memorizing the details of that last look at loved ones.  I missed out on that opportunity with my younger brother Stephen.  I don’t remember where he was standing, what he was wearing, or how we said that last “Goodbye.” So I vow not to make that mistake again.   Nor to miss the chance to say “I love you.”

Don is headed to Mexico for some dental work, and I am headed to Nevada down one long lonely road… 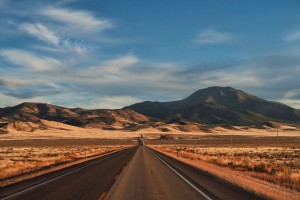 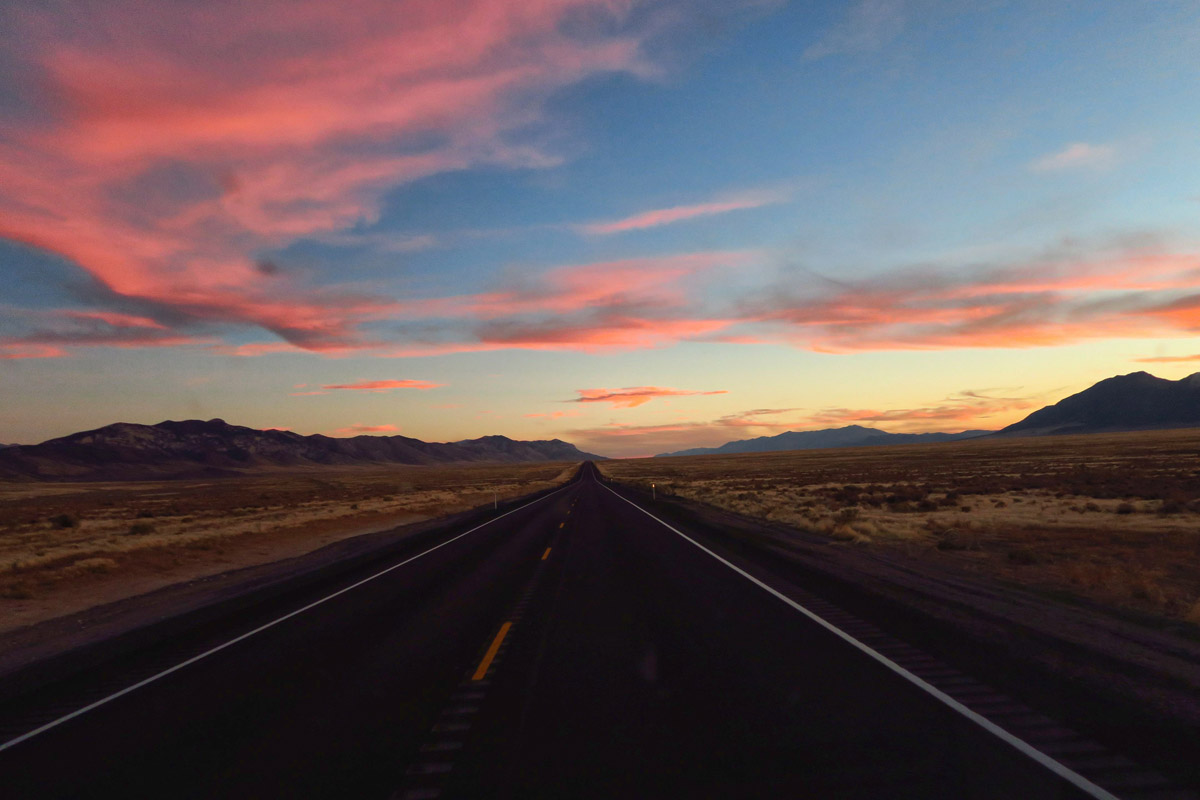