I recently hit that major milestone all RVers look forward to, the National Parks Senior Pass.  Or as I hoped it was really called, “The Golden Age Passport.”   I’d much rather view life from the “golden age” than that of a “Senior.”   I came to hike over 6 miles at 10,000 ft elevation, which doesn’t make me feel much like a senior, but if that’s what they want to call free admission for life and 50% off of all campsites, I’ll take it!  It’s the only silver lining to the golden age.

I hoped to purchase this long coveted pass in Craters of the Moon. I walked into the Visitor Center first thing upon arrival and proudly proclaimed, “I’m here to purchase my Geezer Pass!” But they had none in stock, so they told me to just put “pending” on my campground envelope and let it go at that. So the commemoration would have to wait for Great Basin National Park. 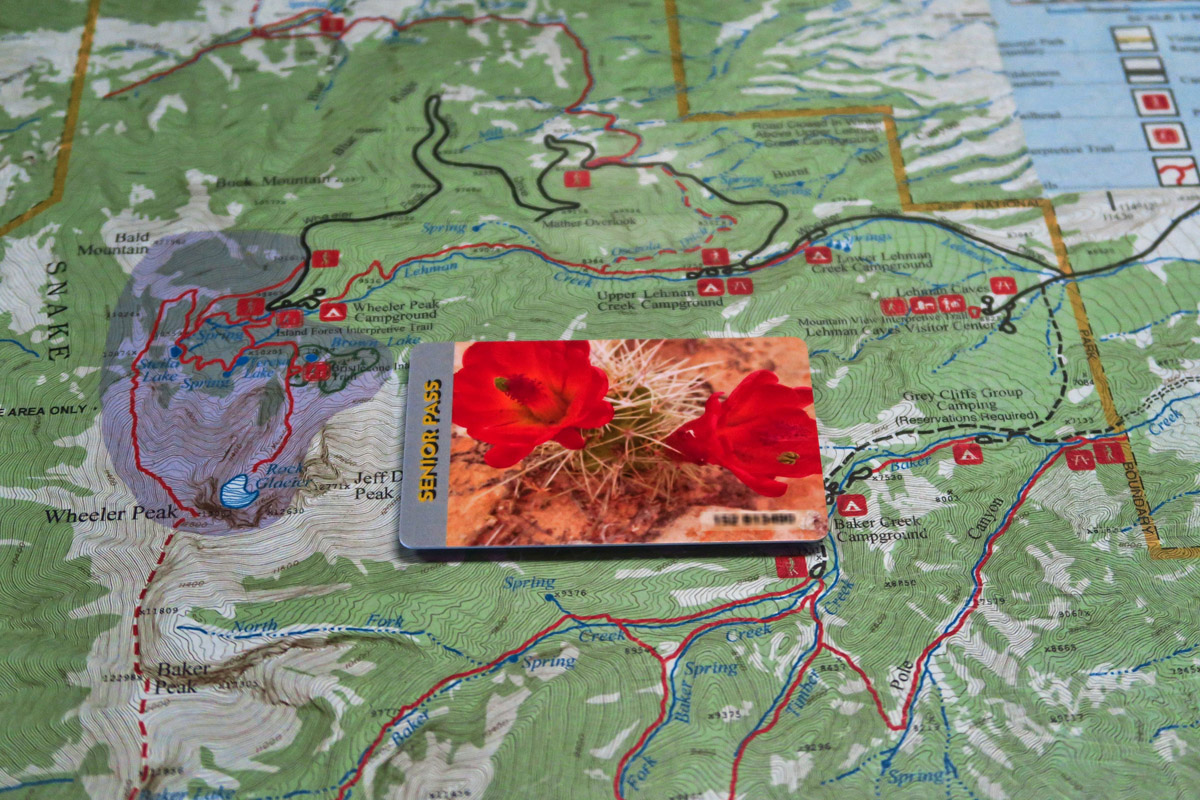 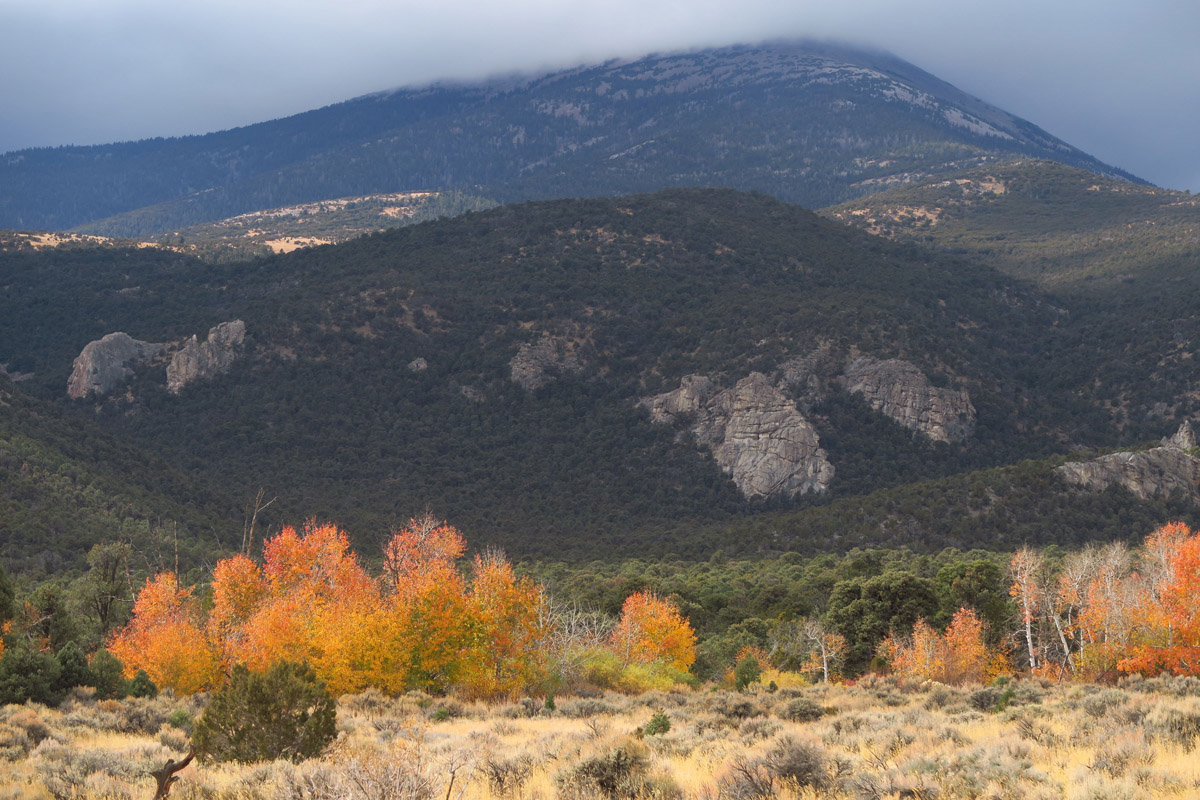 The only fall color remaining in Great Basin in November… 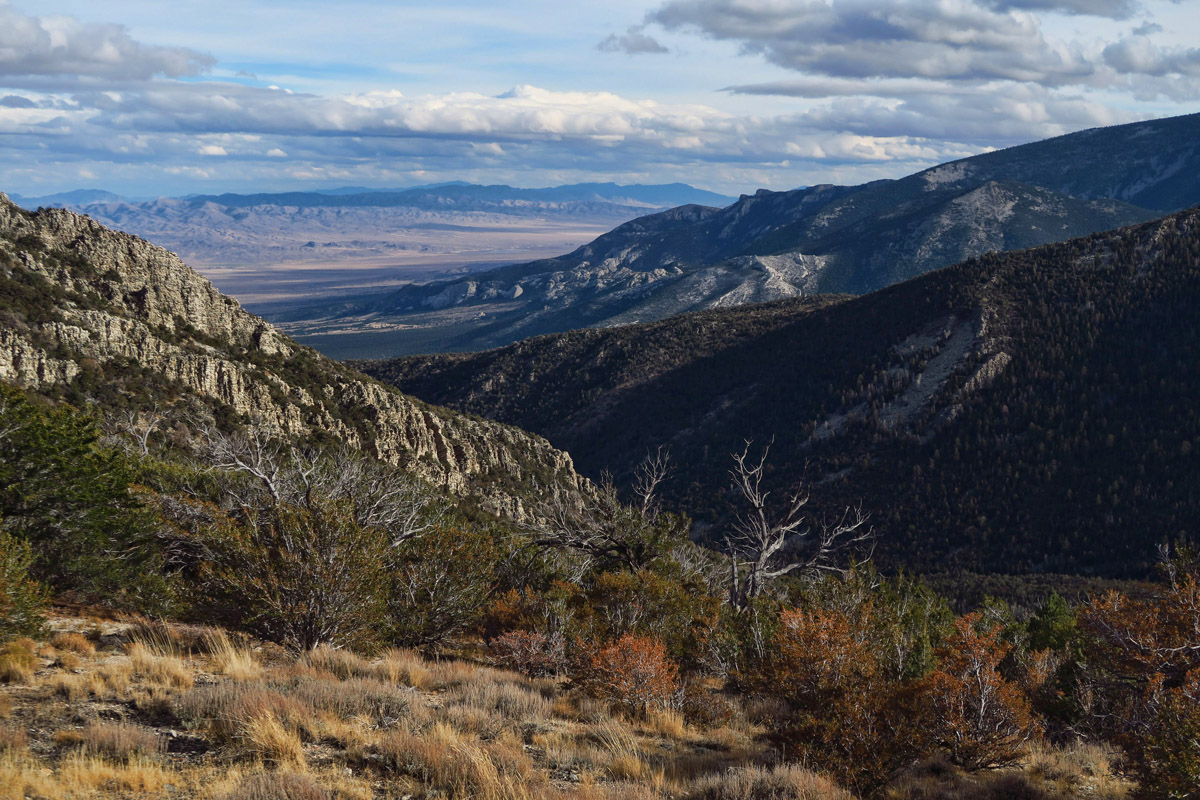 Looking out onto the Great Basin desert. 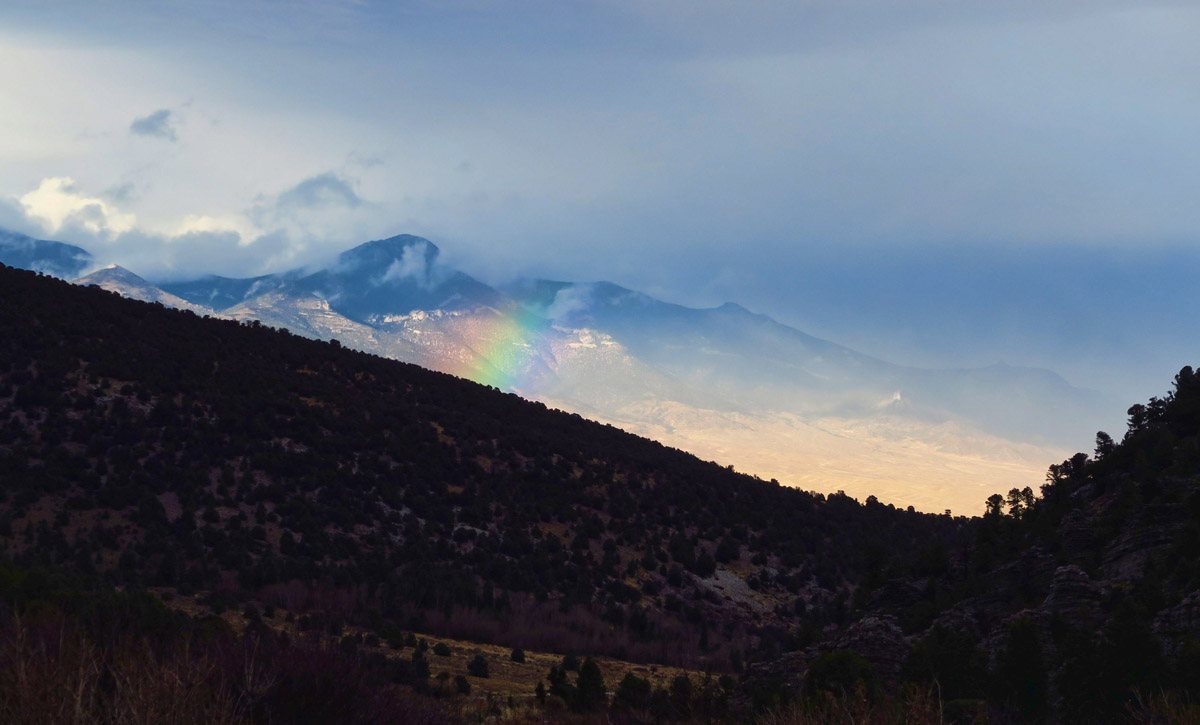 A smidgen of a rainbow as the rain clears over the Great Basin desert.

I had no idea what to expect from this northern Nevada park, having arrived in what is the off season.  With winter closing in, would there even be any campgrounds open?  Trails to hike?  Cave tours still on offer?    Much to my surprise, I found all three. 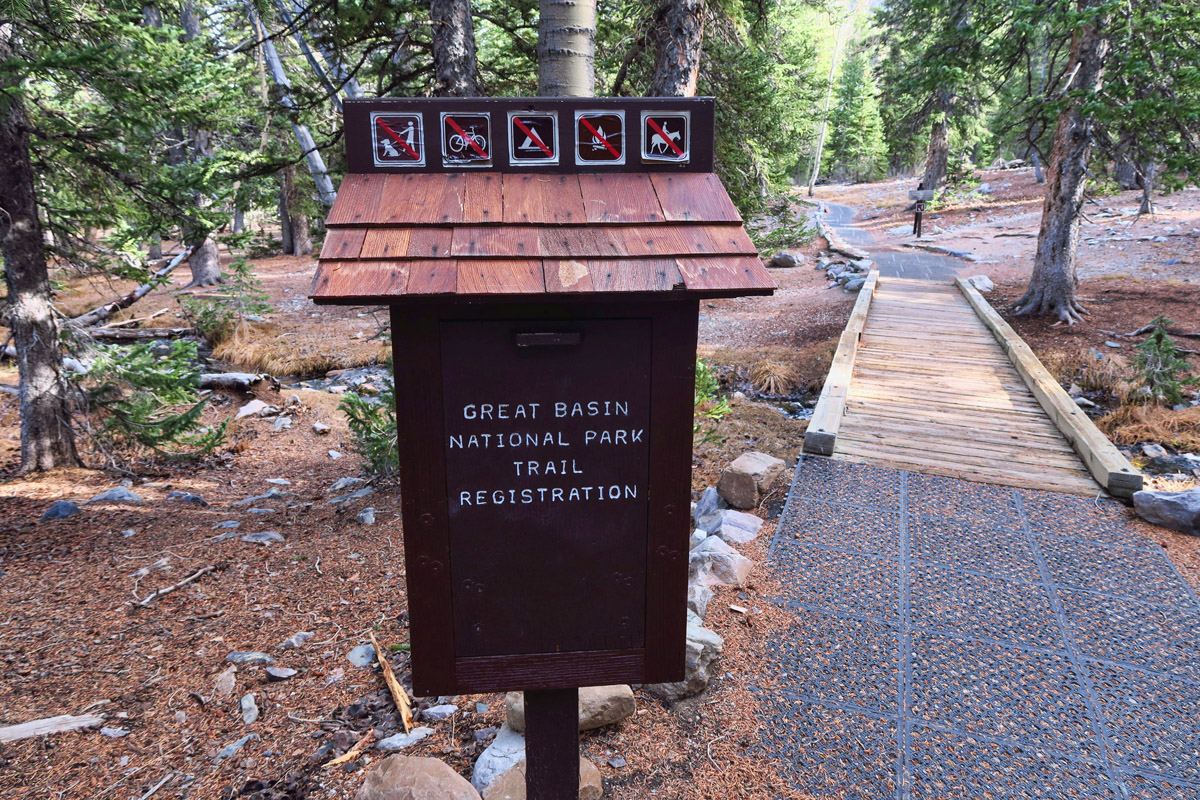 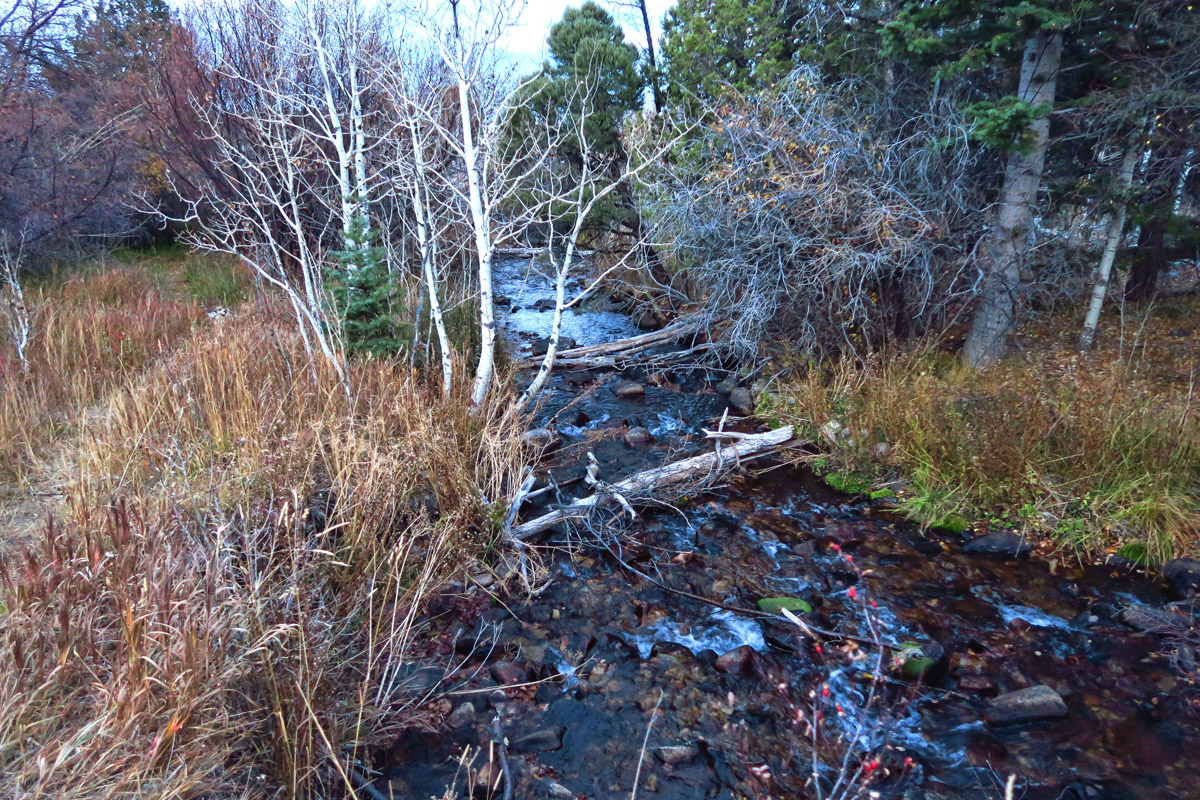 The Lehman Creek Trail goes from Lower Lehman campground all the way to Wheeler Peak. 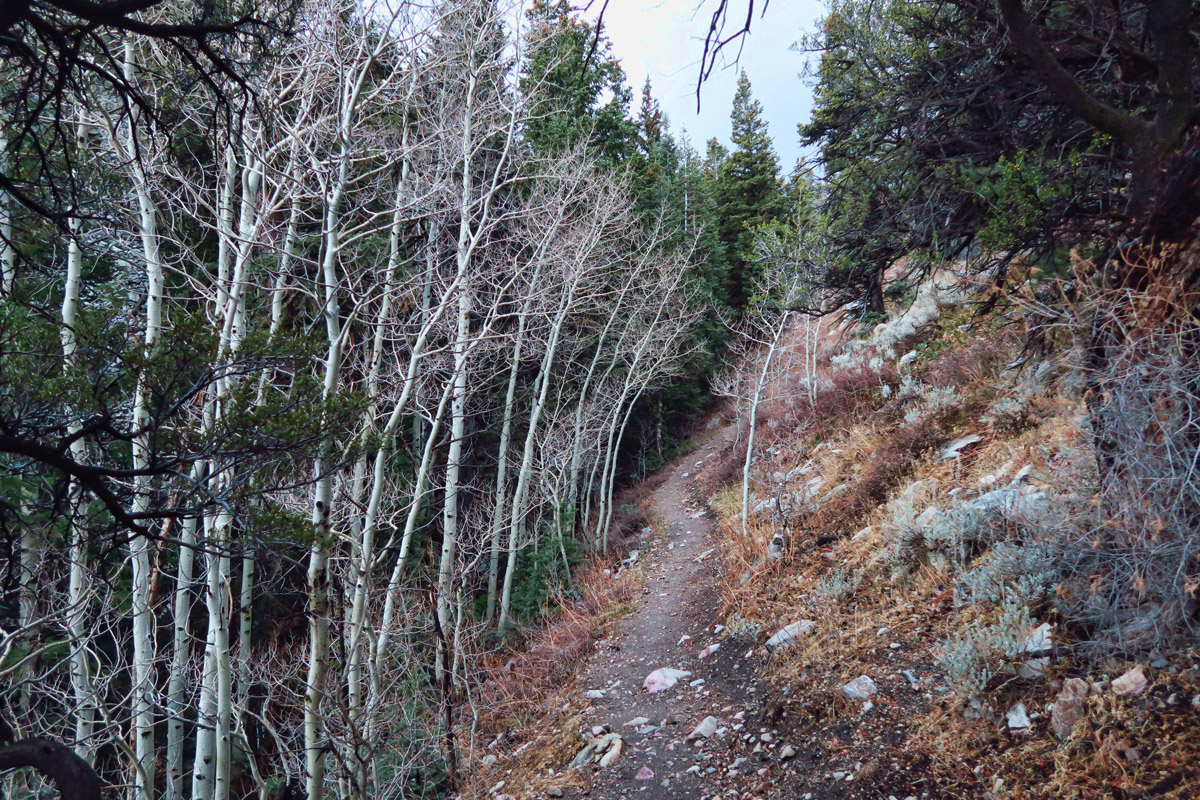 The Baker Loop Trail runs along the creek through several aspen groves.

Of the park campgrounds along the 12 mile Scenic Drive, only one is still open at this time of year, Lower Lehman.   Having only 11 sites, most of them reported to be terribly unlevel, I had low expectations.  But I end up being only one of three people in the campground in Site #10, a level site on the end with lots of privacy and a stream rolling right beneath my back window…all for my new Geezer rate of $6 per night. 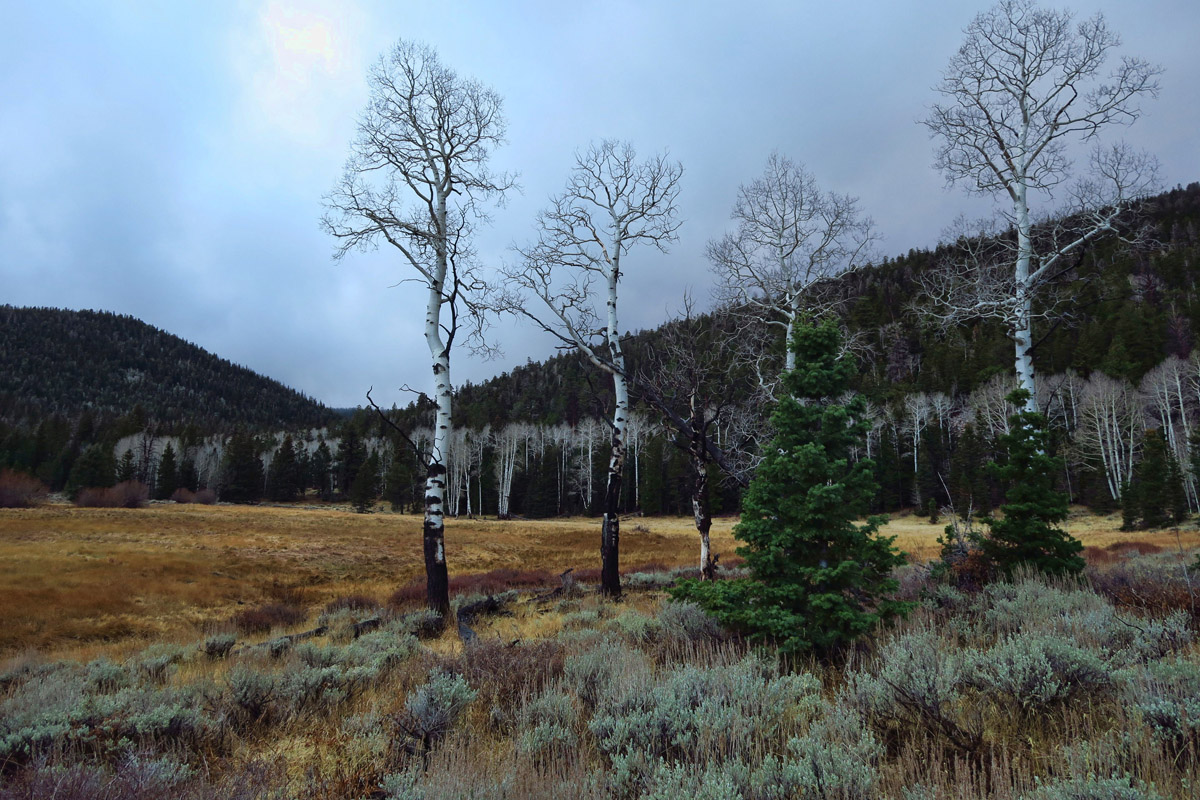 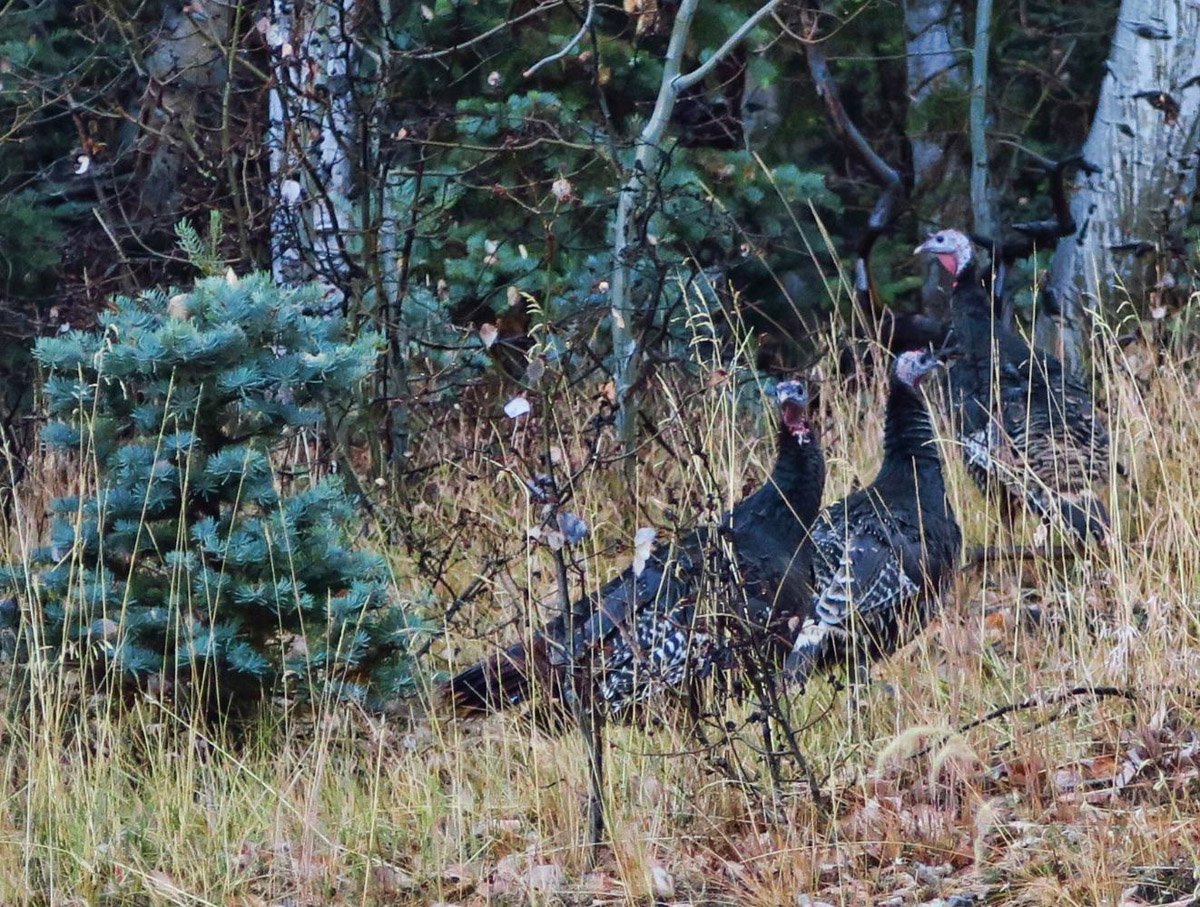 Somebody needs to educate these guys about the upcoming holiday season…

As for the hikes, well, there are plenty to be had in Great Basin.  I did at least one a day during my stay, the Lehman Creek Trail, the Baker Lake Loop, and two at the top of Wheeler Peak Scenic Drive.  This 12 mile winding 8% grade road gains over 4,000 ft to an elevation of over 10,000 ft at the base of Wheeler Peak.  The road crosses several ecological zones, from the rocky desert carpeted with sage to the pinyon pines and junipers, finally topping out at the alpine forest filled with bare limbs and stark contrast of paper-white aspens.  I just missed the fall color.  I can only imagine what these trails must look like in the golden splendor of autumn. 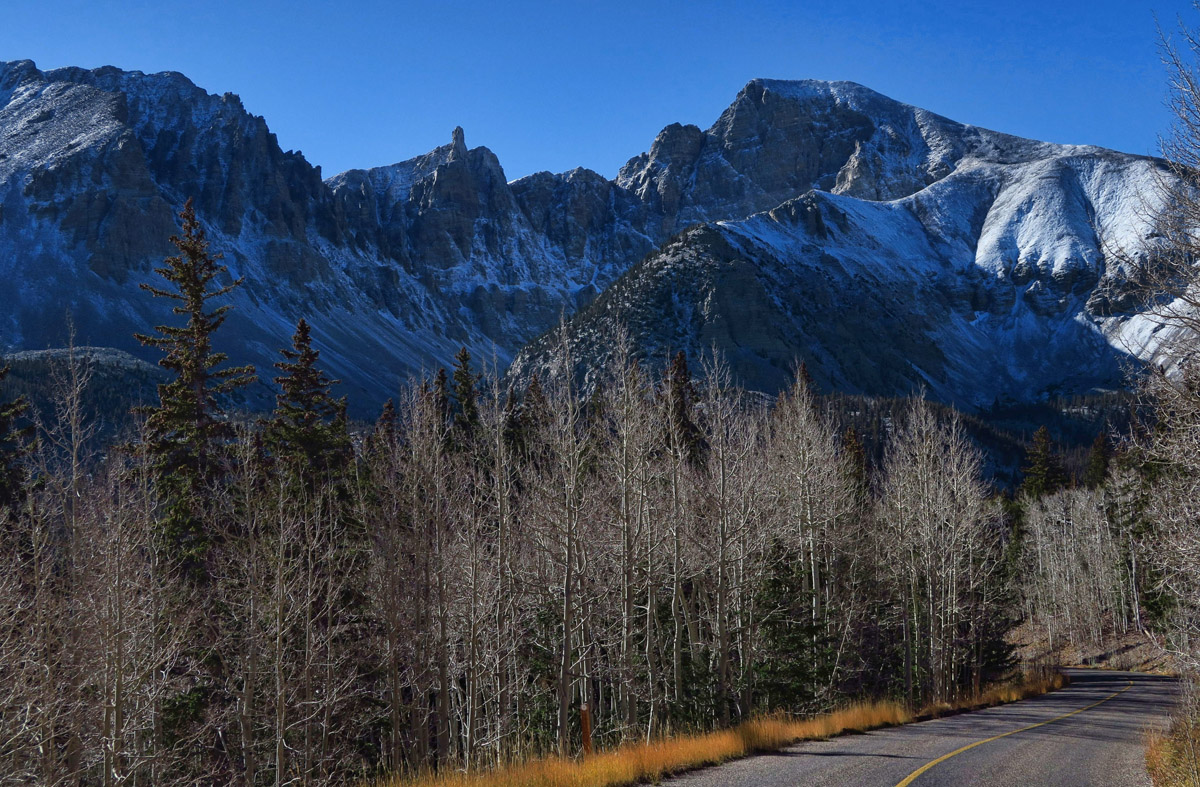 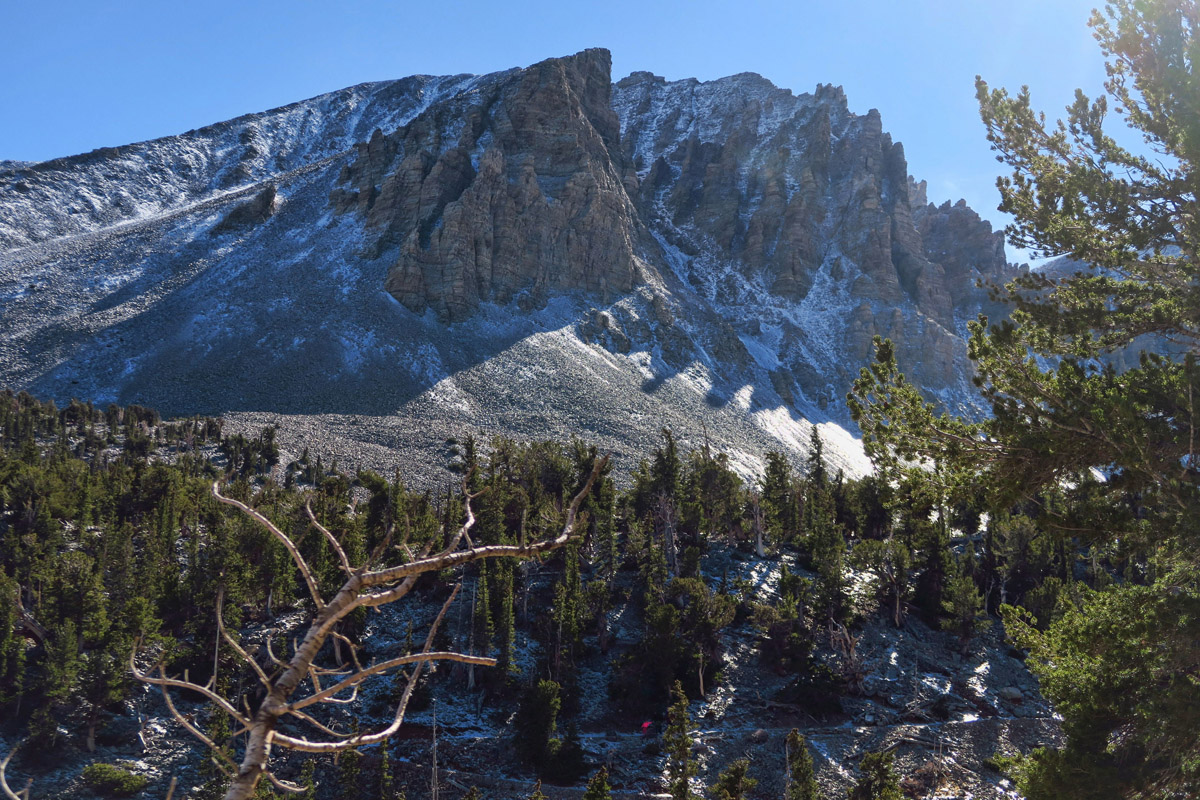 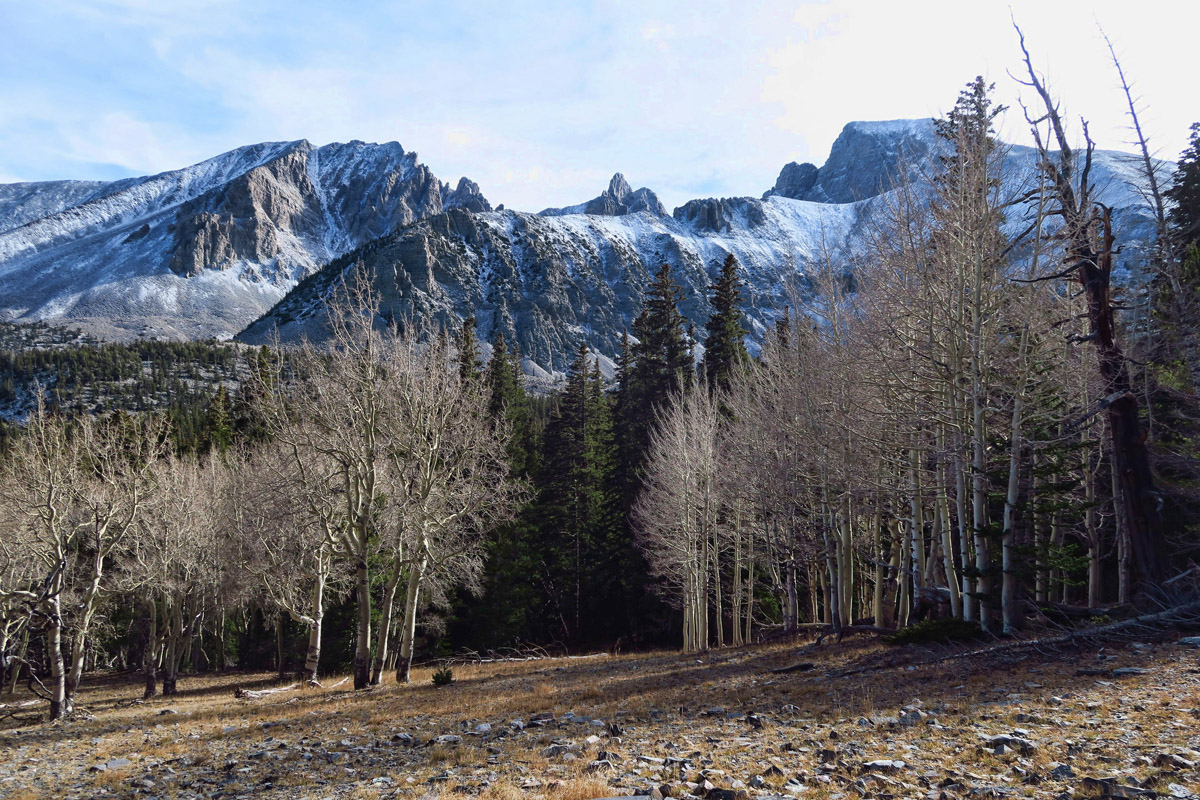 Wish I could have seen the fall color change…

While I do the hikes at lower elevation as “exercise hikes,” I have been gearing up for the two at the base of Wheeler Peak.  The Alpine Lakes Loop which skirts both Teresa and Stella Lakes is beautiful, particularly with the views of the snow-covered mountains as a backdrop.  Wheeler Peak (elev 13,063) creates its own weather as moist air blows from the west and cools as it is forced over the peak, forming clouds.  I take a lunch break beside Stella Lake, sunning while watching the wispy clouds form on approach to the peak, then rapidly dissipating as they move over the lake. 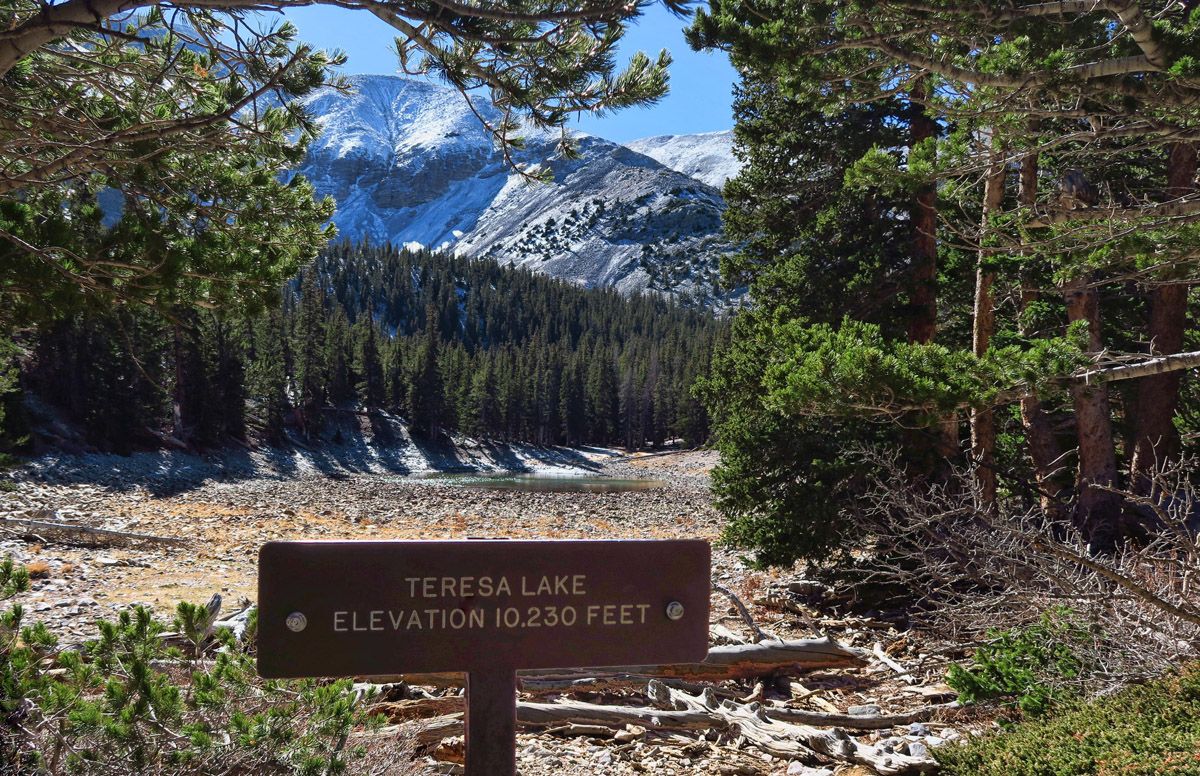 Teresa Lake, elevation 10,230 ft along the Alpine Lakes Loop. Not much water at this time of year. 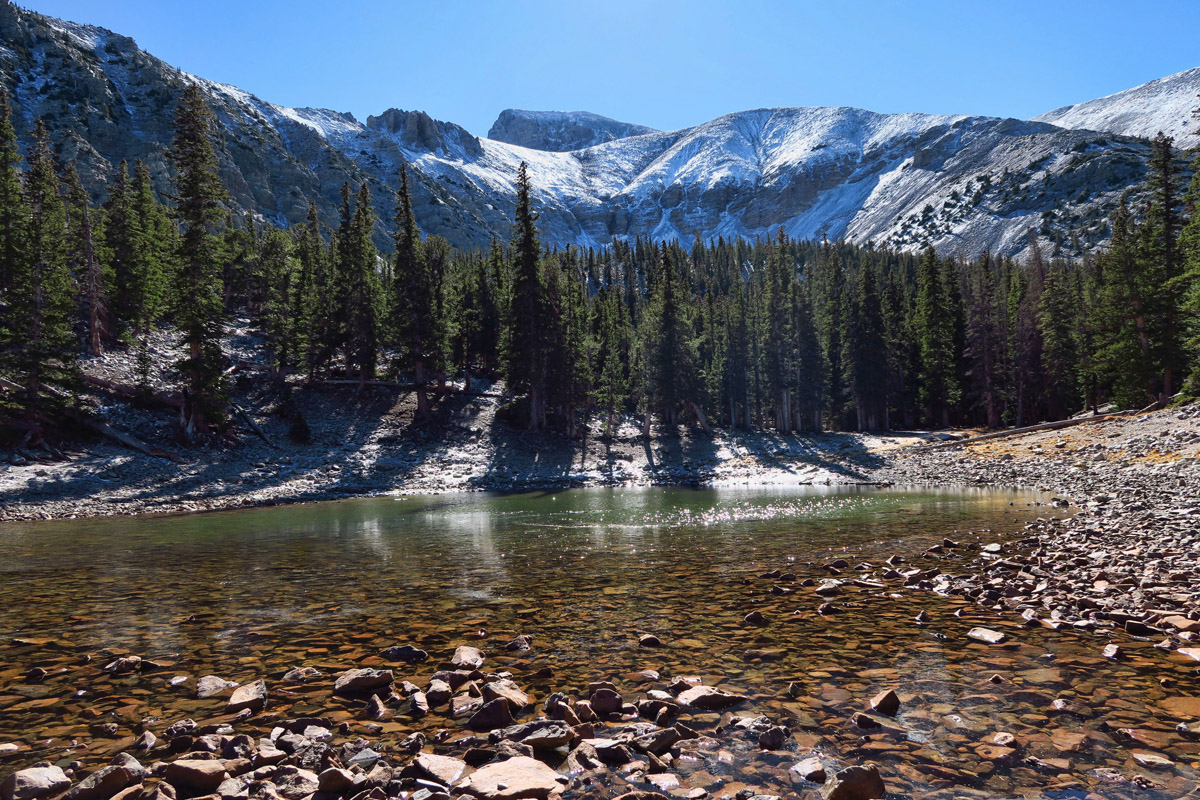 There are no fish in either Teresa or Stella Lakes, as they are shallow and freeze nearly to the bottom in winter. 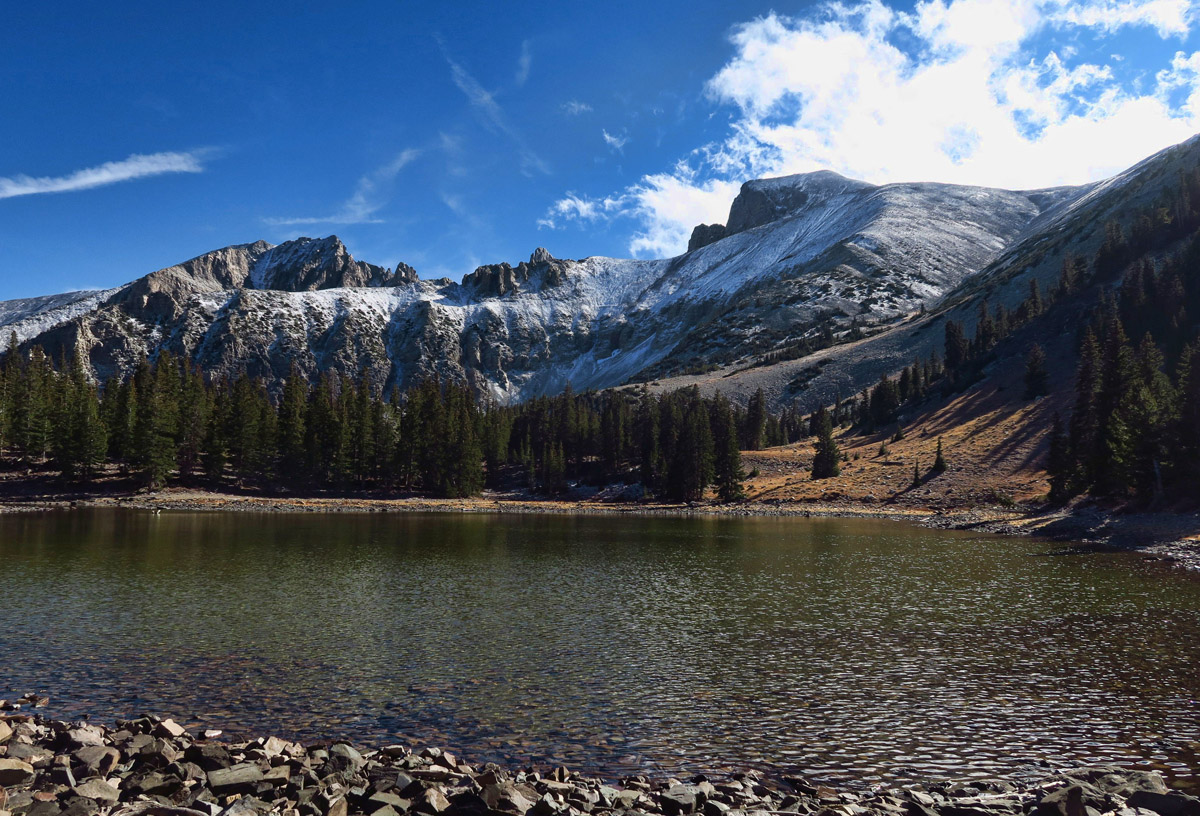 I could have sat in my lunch spot for hours along Stella Lake, watching these clouds form and dissipate within a matter of minutes.

But I think the most memorable hike of my stay in Great Basin will be the Bristlecone Trail.   Often times, the most adverse conditions leave the most lasting impressions.  Such was the nature with this trail.  Having read about the ancient bristlecone pines, believed to be as old as 5,000 years, the longest living life form on earth, I am intrigued.  I learn that the needles alone can stay on a tree for 40 years.  Their resistance to adverse conditions, their slow and strained growth against the elements, ability to survive at high elevation, reluctance to die…it just seems after millennia of years of struggle to survive, I should make the struggle to see them. 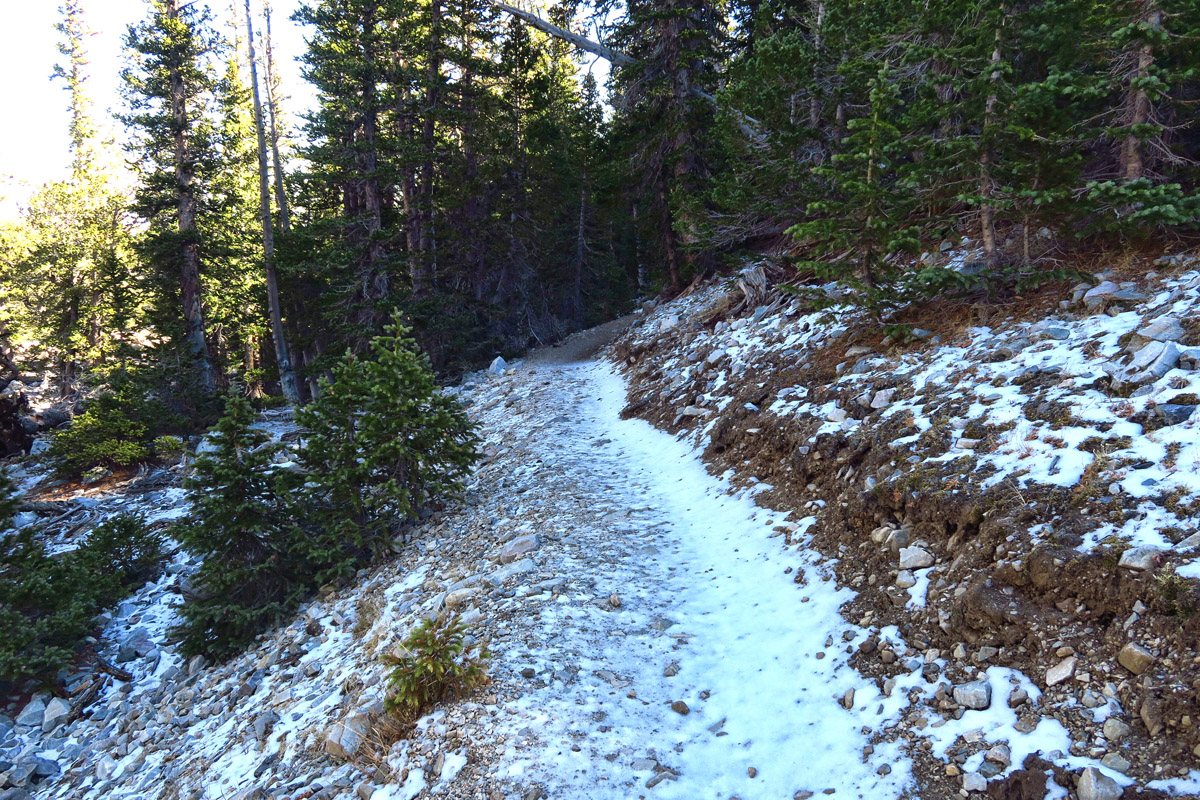 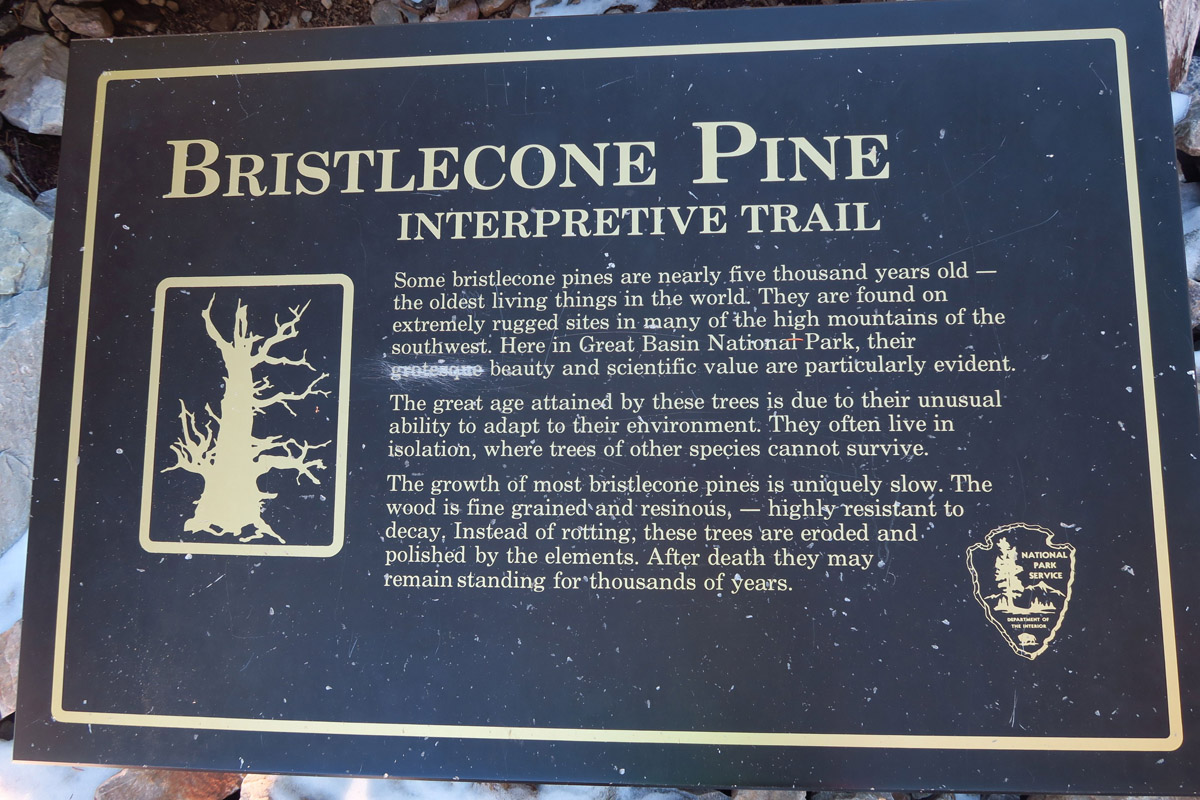 I don’t often find amusement at public defacing, but I had to laugh that someone took offense to the description as “grotesque.” 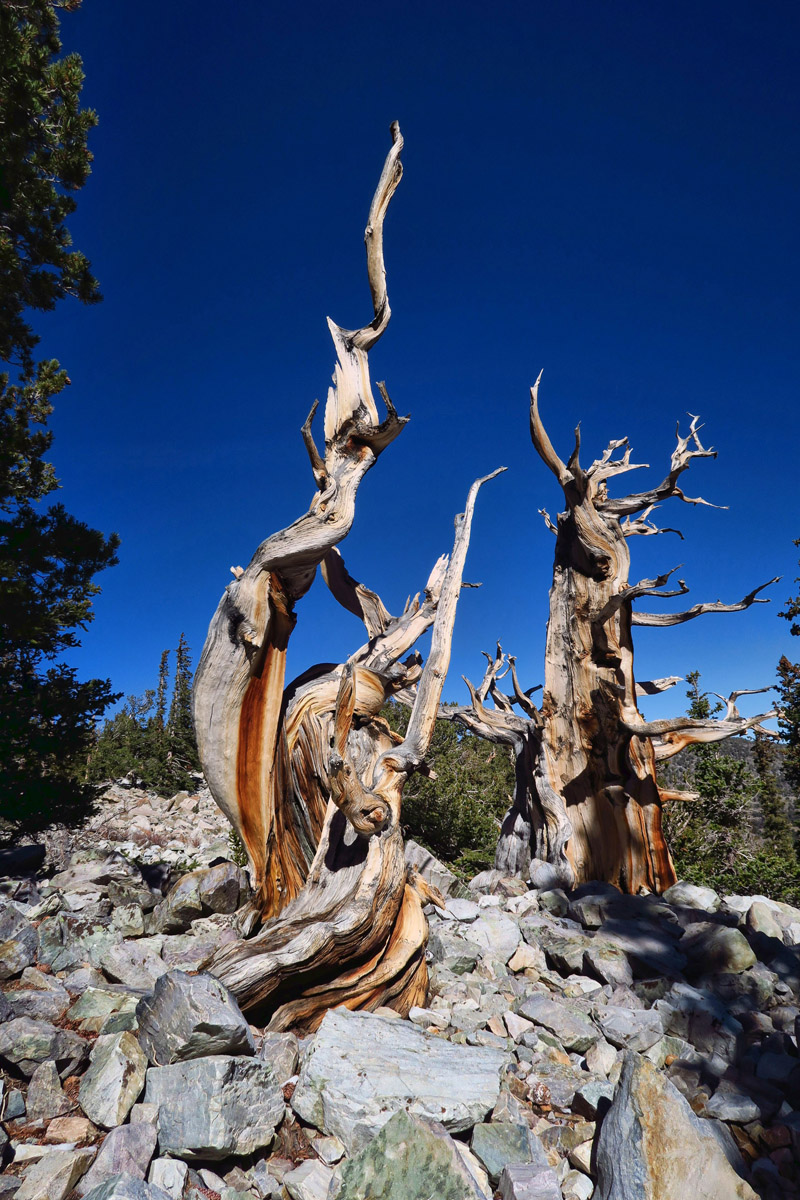 They do sort of look “grotesque”….in a beautiful way.

Being one of the higher altitude hikes, the upper parts of the trail are covered in ice.  Recent snow and sleet has melted by the sun, then re-frozen over as slick as glass.   The inclines are particularly difficult as my feet are steadily planted one minute, then sliding backwards the next with no means of control beyond the pointed end of my single hiking pole.  Just about the time I decide to turn around rather than risk a broken limb, I am passed on the trail by two more senior geezers.  Of course, when it comes time to descend, they slide down on their butts!  I confess to doing the same, but better to wear out a pair of pants than wear a cast! 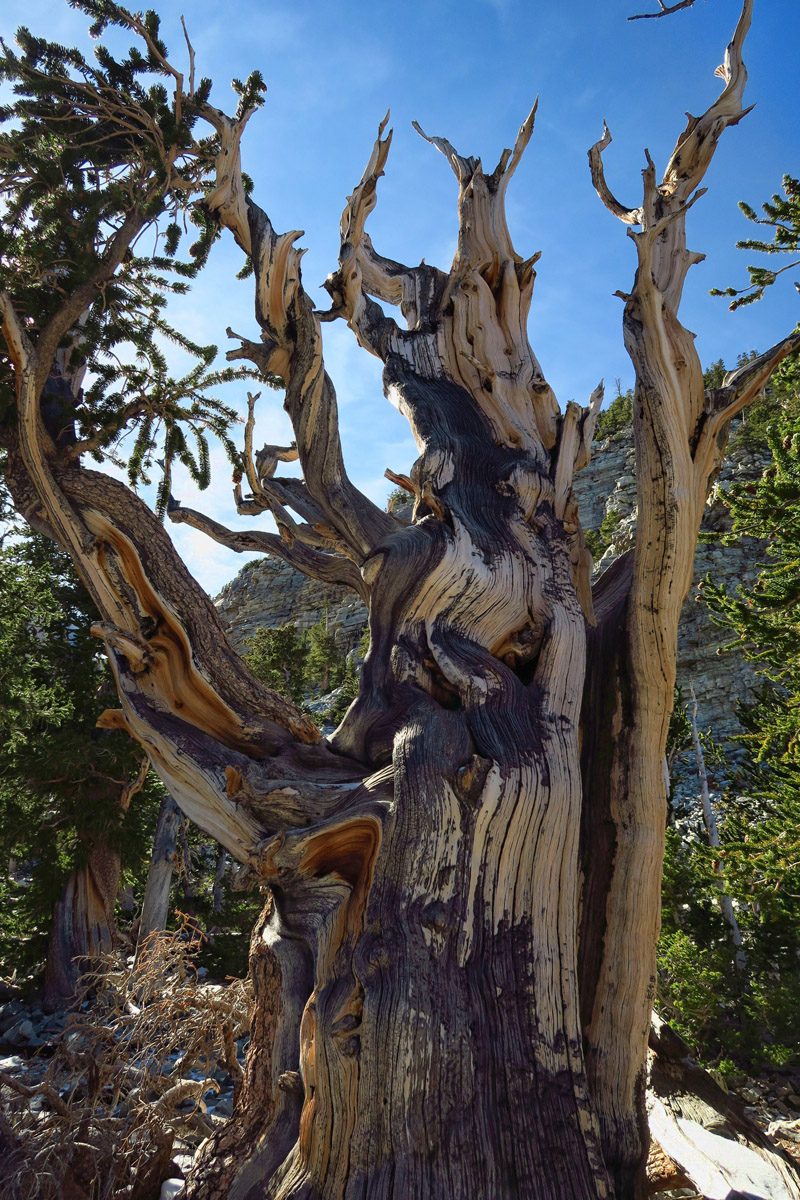 Though some specimens in California’s White Mountains have been dated back 5,000 years, the ones in Great Basin are believed to be more in the 3,000 year old range. Talk about GEEZERS! 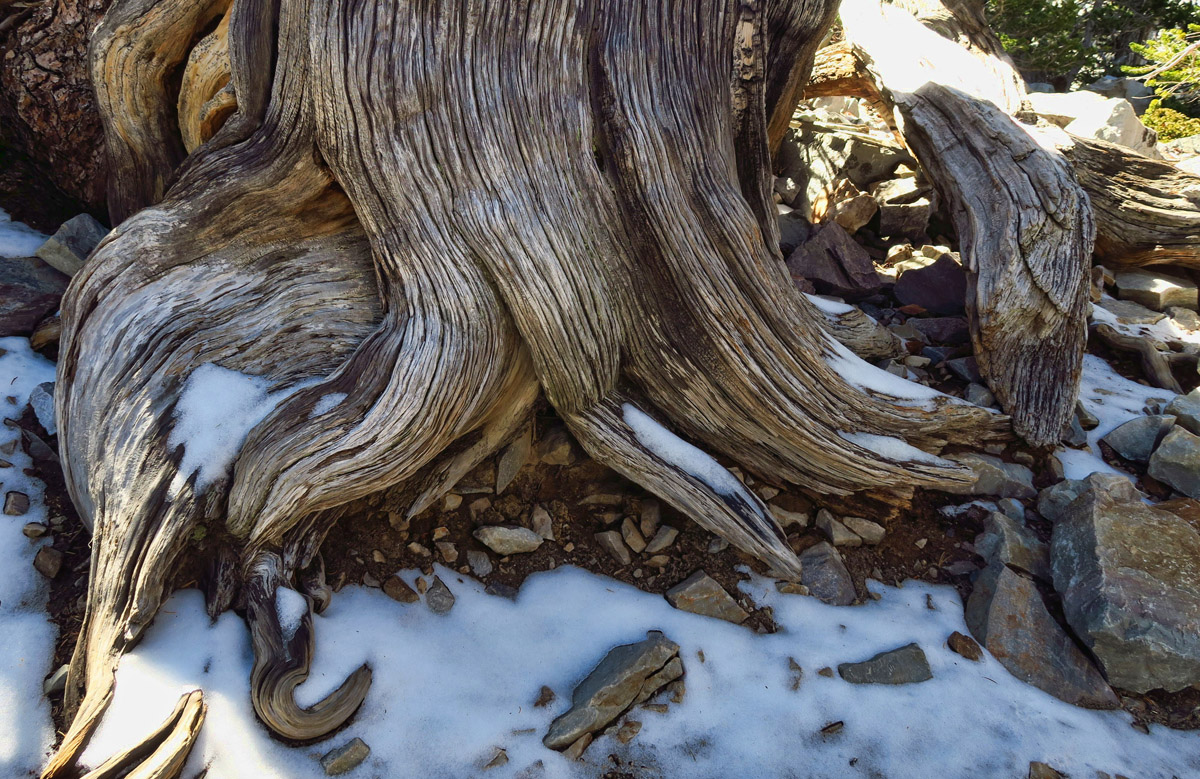 The hard wood, high in resin, weathers more like stone than trees. 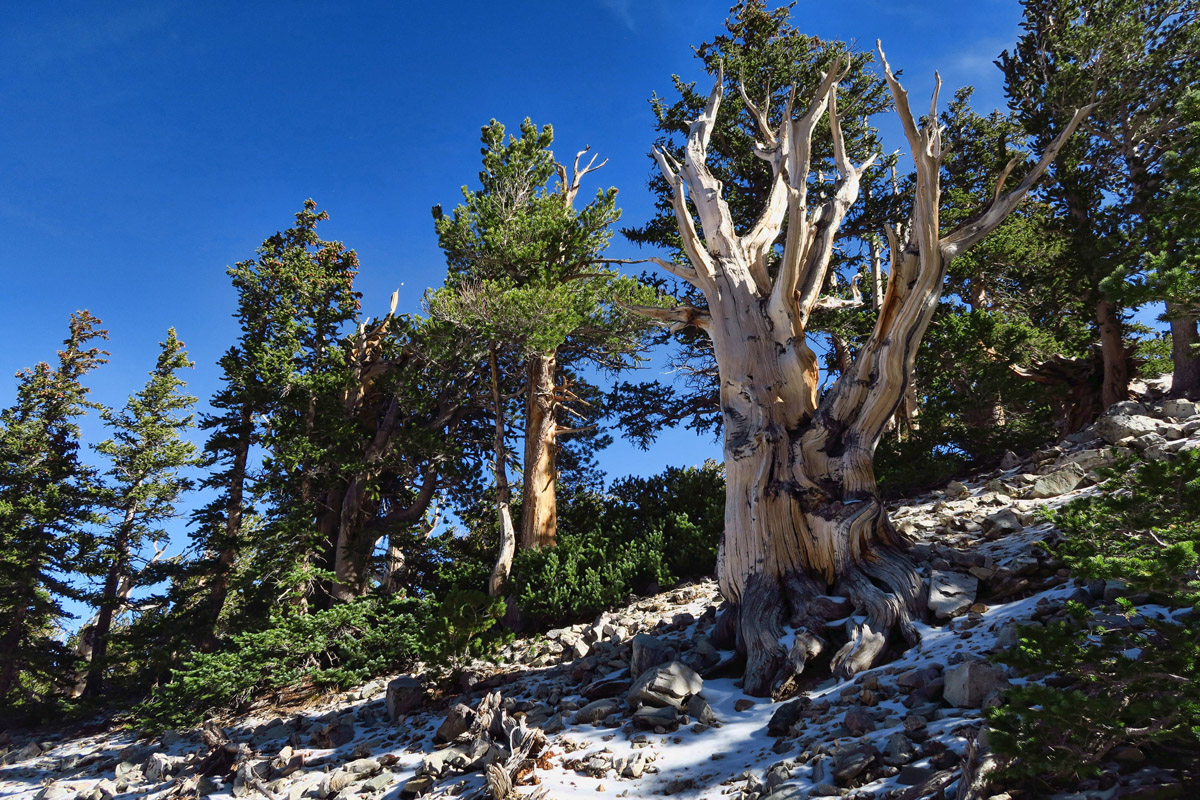 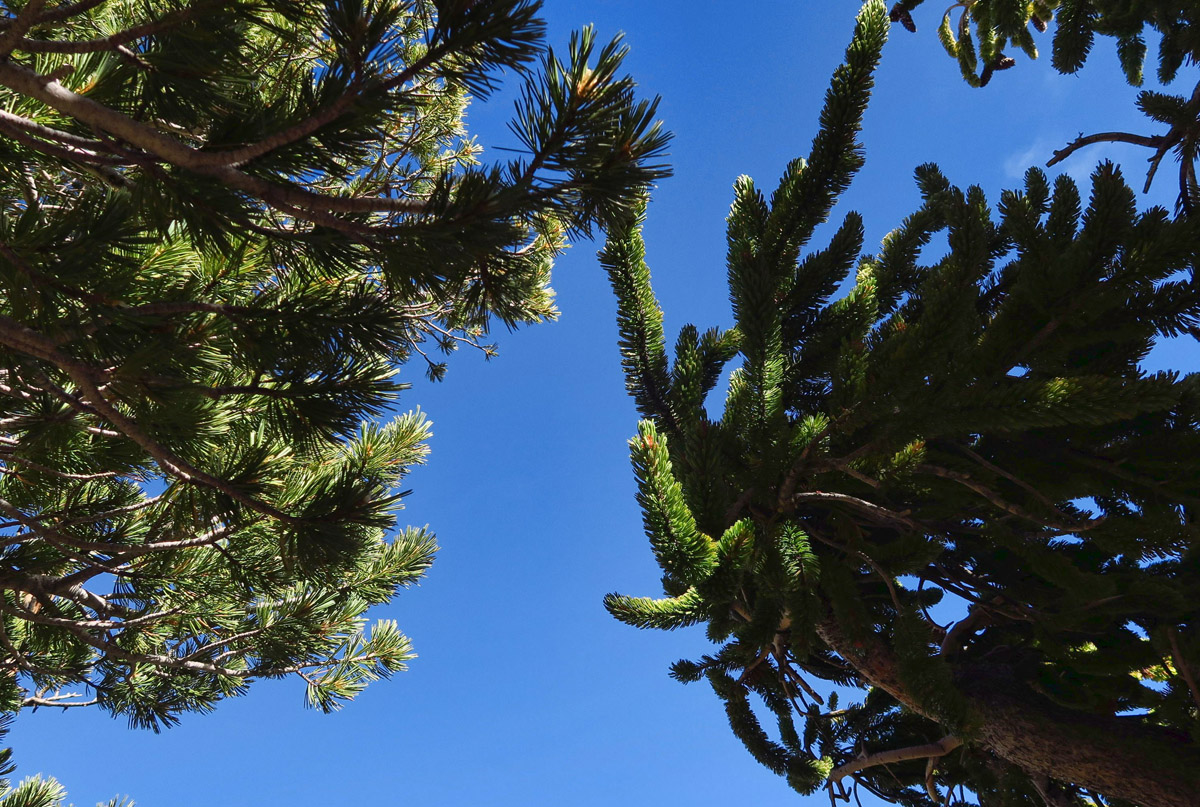 The descriptive sign beneath these two trees describes how to recognize a Bristlecone Pine from a Limber Pine. The needles of the Limber looks like a well-worn bottle brush, while the Bristlecone looks new.

Perhaps the most unique feature of the Great Basin National Park is the Lehman Caves, once the namesake of the park.   These caves are best known for their “shields,” or round discs.  Shields are considered to be somewhat rare, with often only one or two occurring in a cave system.  Lehman Cave has over 300 of them.  Though I did research, I am still challenged to see how these bizarre “paddle shapes” can form in midair. 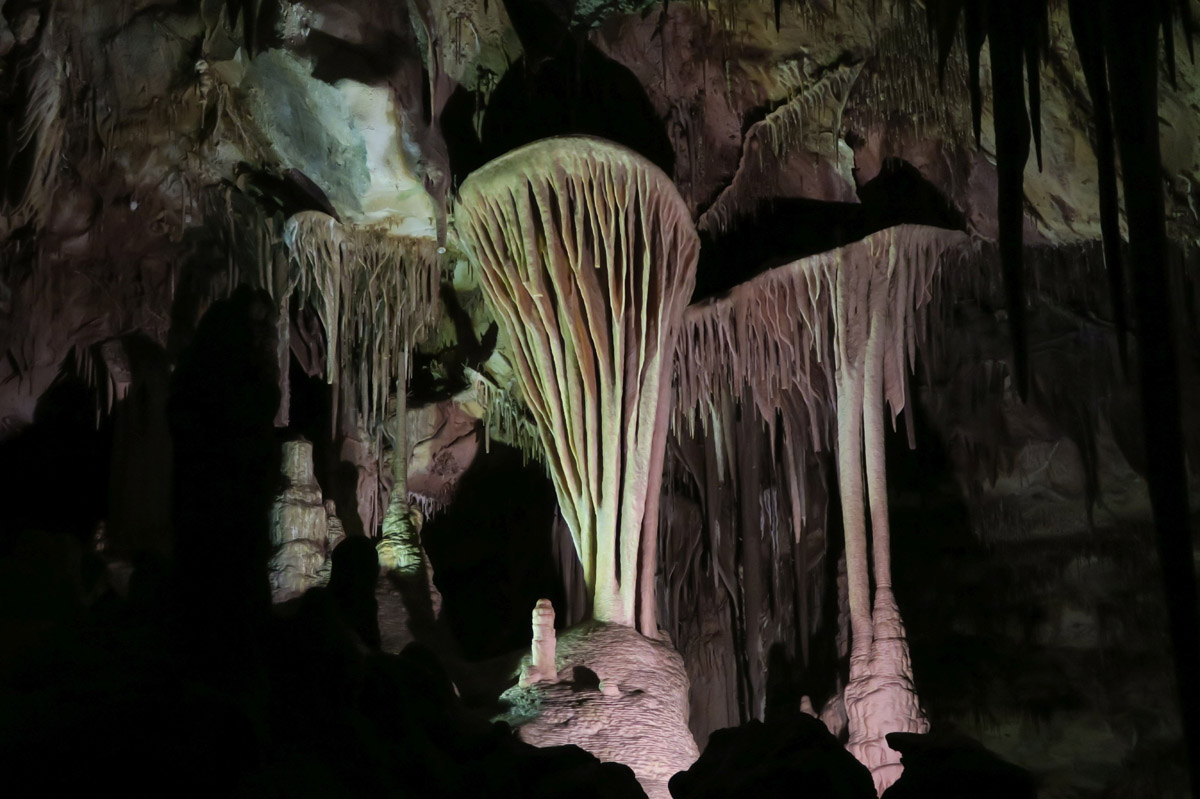 The most famous of Lehman’s shields, called the “Parachute Formation.” 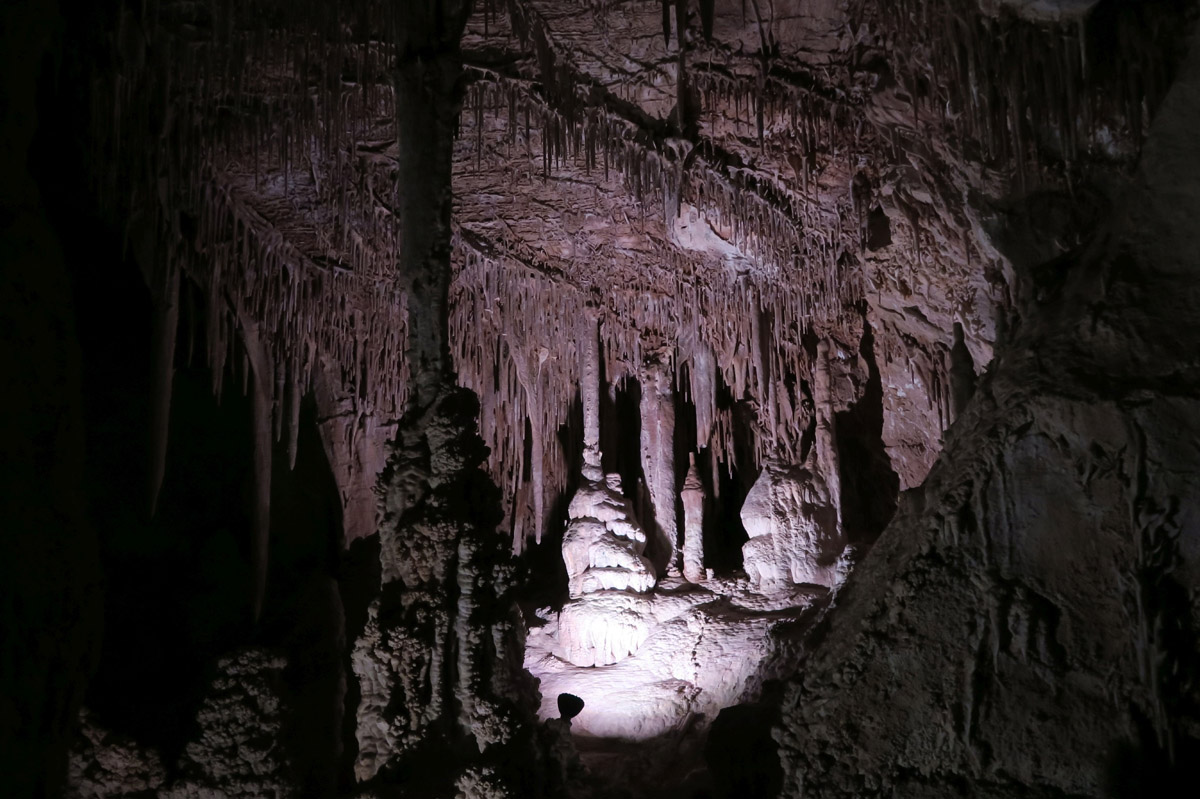 Lehman is a heavily decorated cave with lots of history. 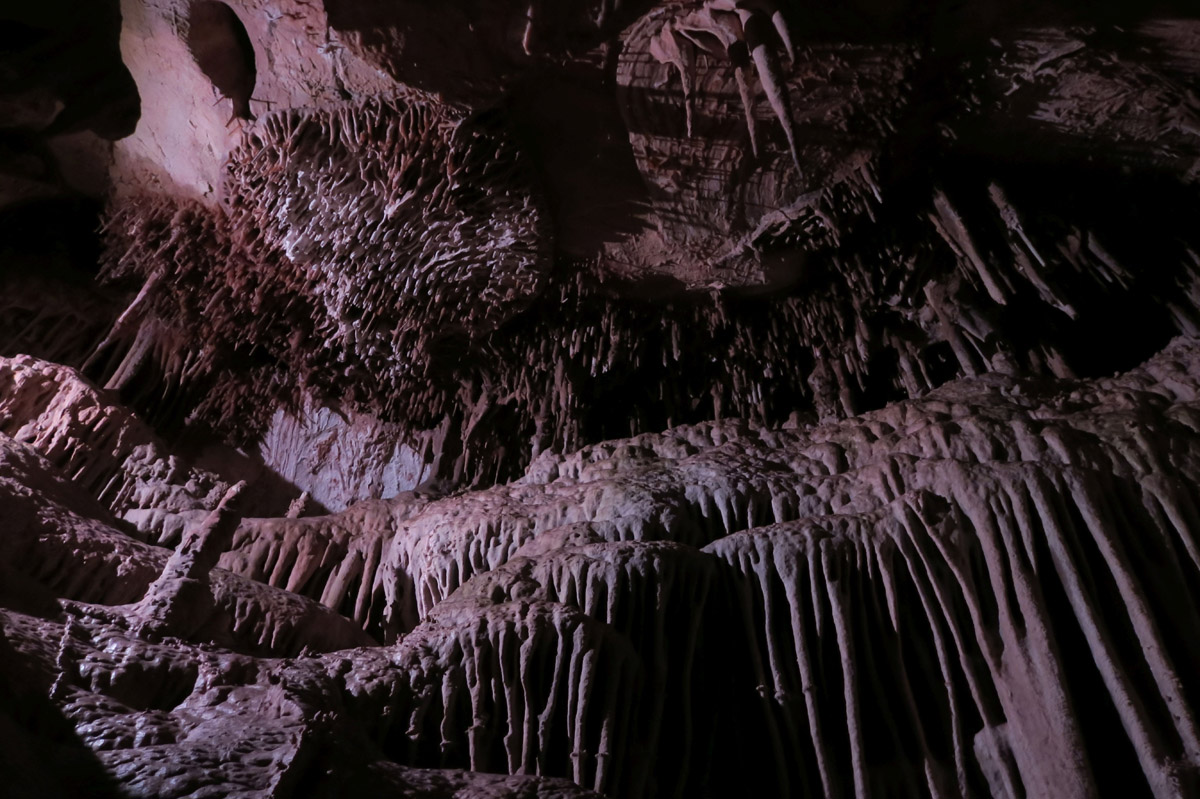 In the 20’s, lavish parties were held in rooms named “The Lodge Room” and the “Grand Palace.” 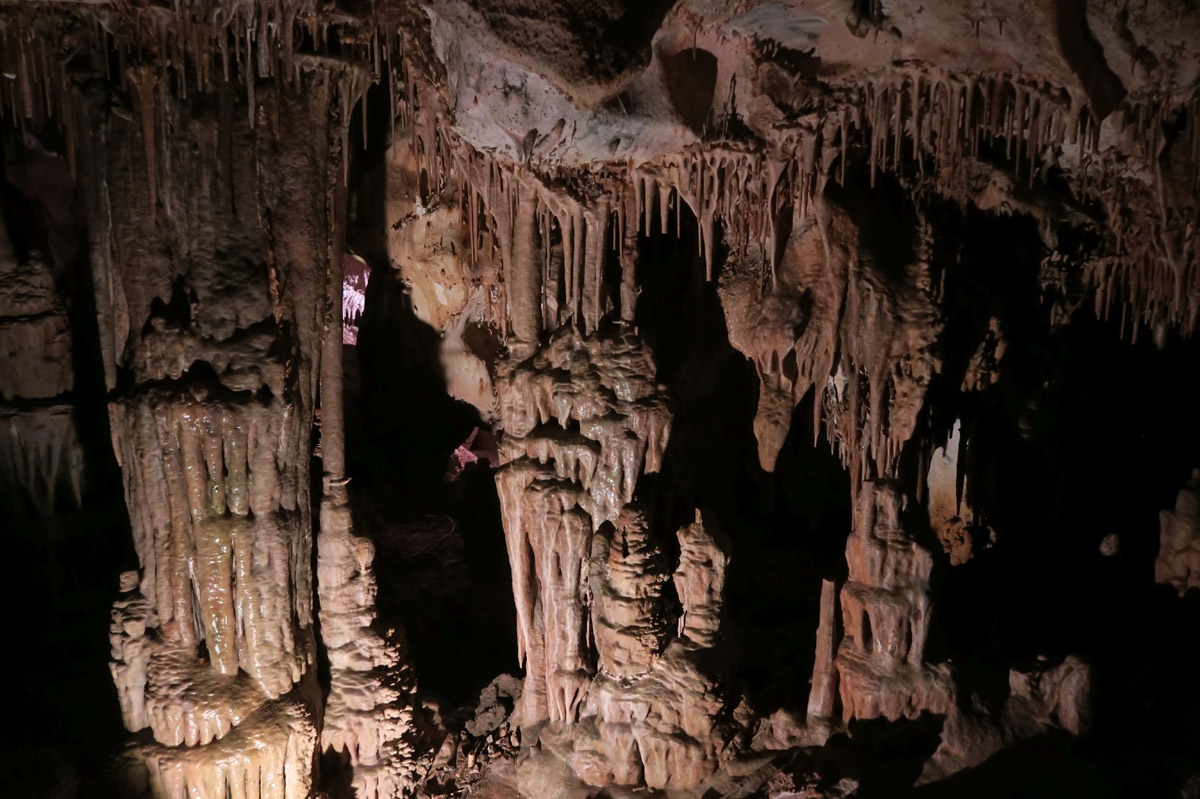 Visitors were encouraged to take home souvenirs of stalactites. Our Ranger tour guide told us relatives recently returned a box of these, taken by their deceased grandparents.

All shapes and speleothems have names, like “draperies,” “popcorn,” and the most interesting, “bacon” with variously colored bands through the drapery formation. 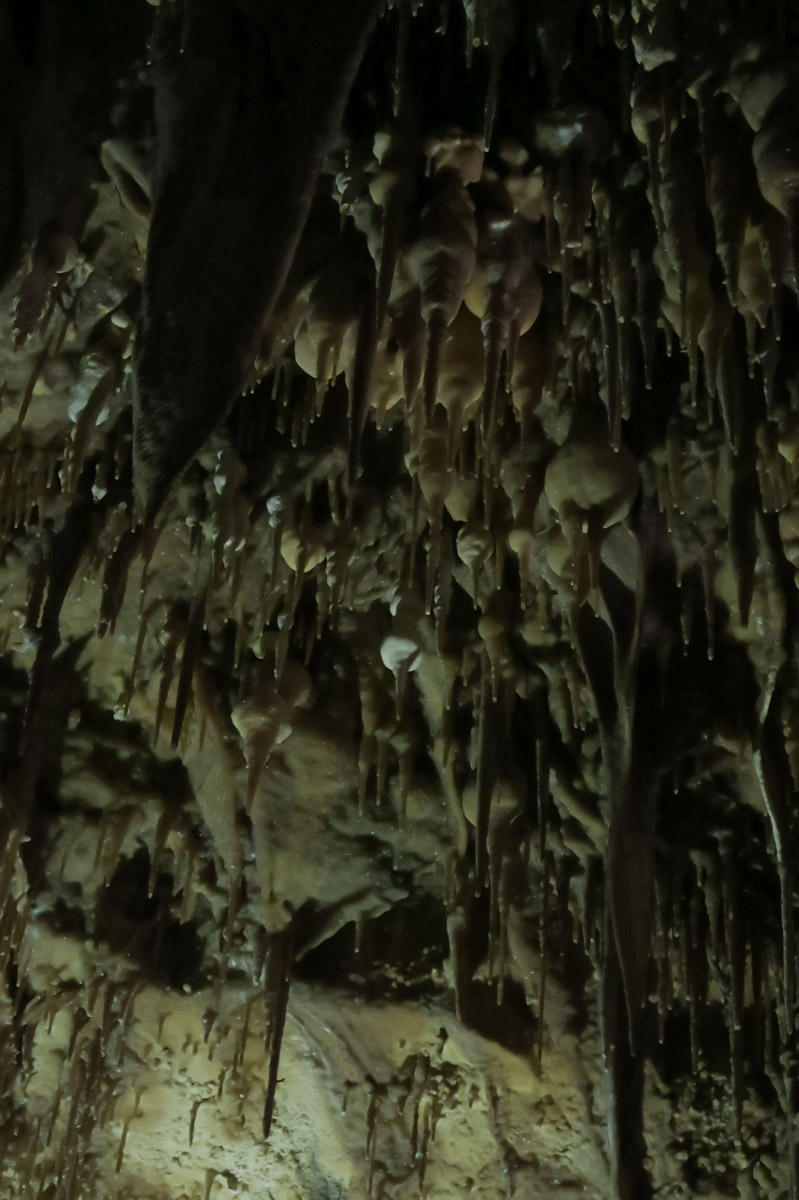 I really liked these “soda straws” that have a bubble at the base. They remind me of Christmas decorations from my childhood.

I caught a dreadful cold while in Great Basin, I believe to be the result of spending 90 minutes in such a closed environment with 20 people on the cave tour.  Although I “sanitized” after holding on to the railings, there’s just no avoiding the petri dish effect of inhaling others germs in such a confined air space.  For the entire week, the Winnie reeked of Halls Cough Drops and Vicks Vaporub.   A fitting aromatherapy for a newly minted Geezer…