Just how long can one stretch out a story about the Grand Canyon, one might ask?  Well, longer than the average visitor spends on the edge of the rim…

I decide to stay one more day on the snowy South Rim, after all, no one seems to notice that the Winnie is taking up space in the empty Backcountry Office parking lot.   I’m already winterized and have plenty of propane, and my parking space is within a 10 minute walk of the rim.   Why not stick around one more day, put all my gear away from the trip, and do some of the “touristy” things along the rim? 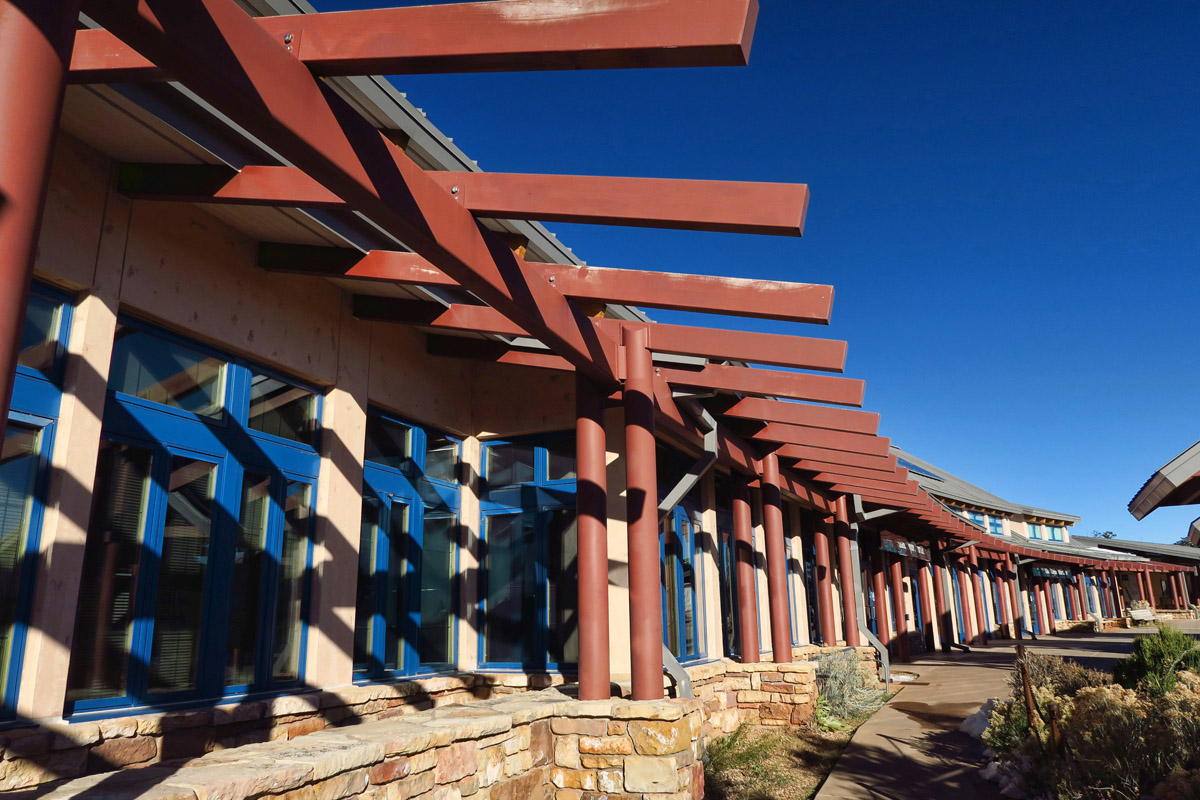 One of the largest Visitor Centers I’ve seen in a National Park. 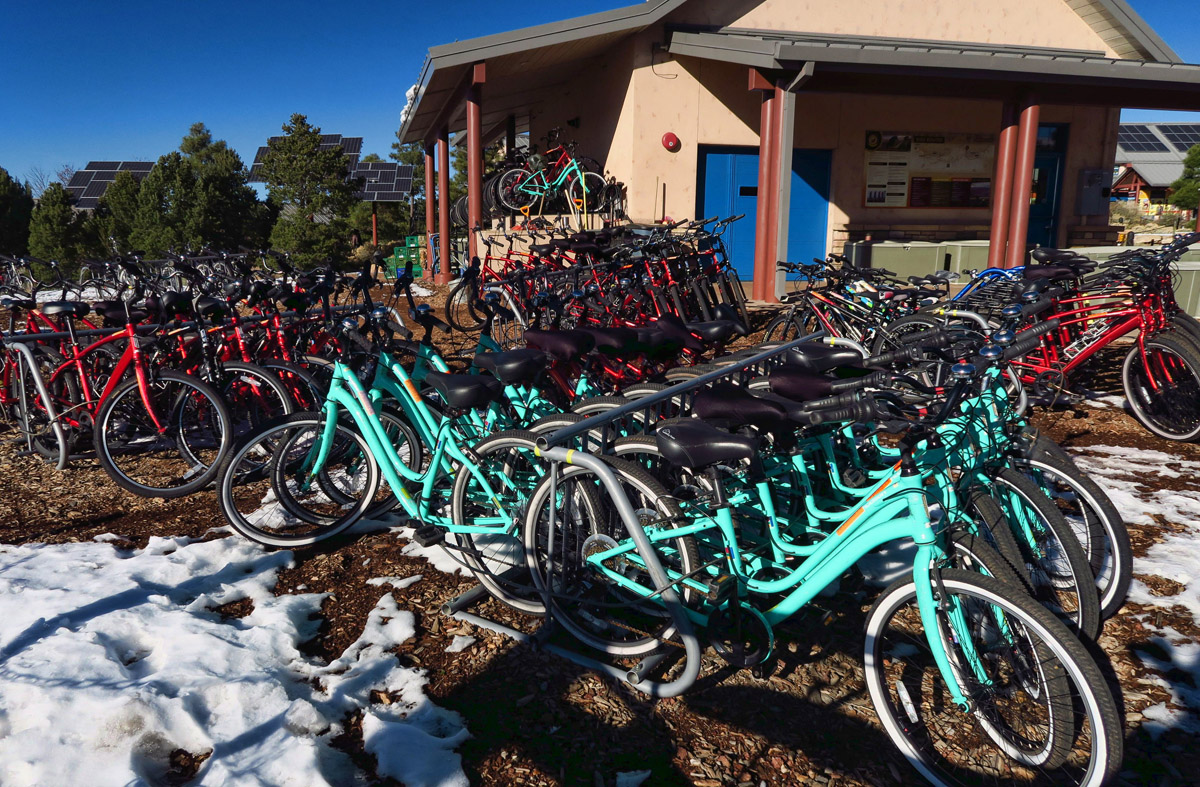 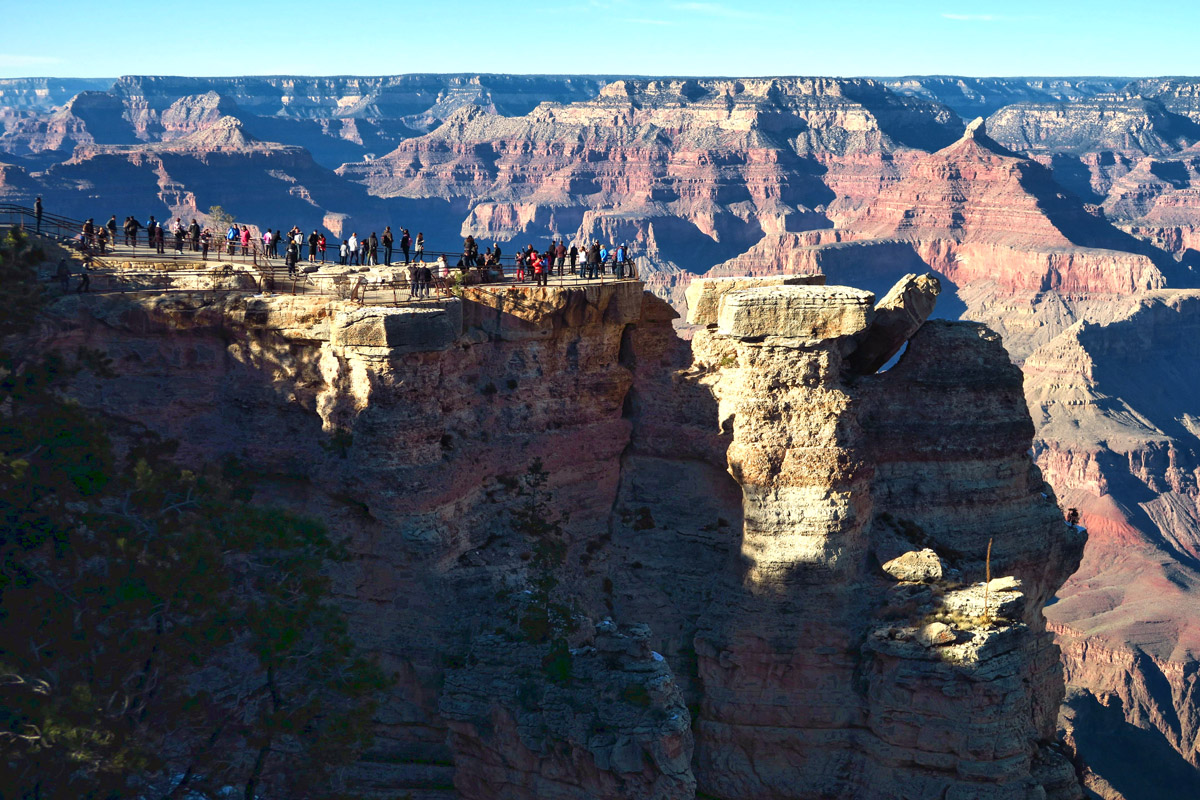 Mather Point, from the Visitor Center.

I stop at the expansive Visitor Center, but the big fancy projector in the movie theater is not working.  Turns out it’s so automated that no one knows how to revive it. So I decide instead to have a chat with the Ranger.  At first, he seems a bit bored with my “rim shot” questions, but then I tell him “I am not one of those ‘wham-bam’ tourists…I actually spent the last three days at the bottom of the canyon.”  From this point on, we have a lovely and engaging conversation, sharing a few laughs.   He tells me his number one question asked is “What’s there to see and do here?” 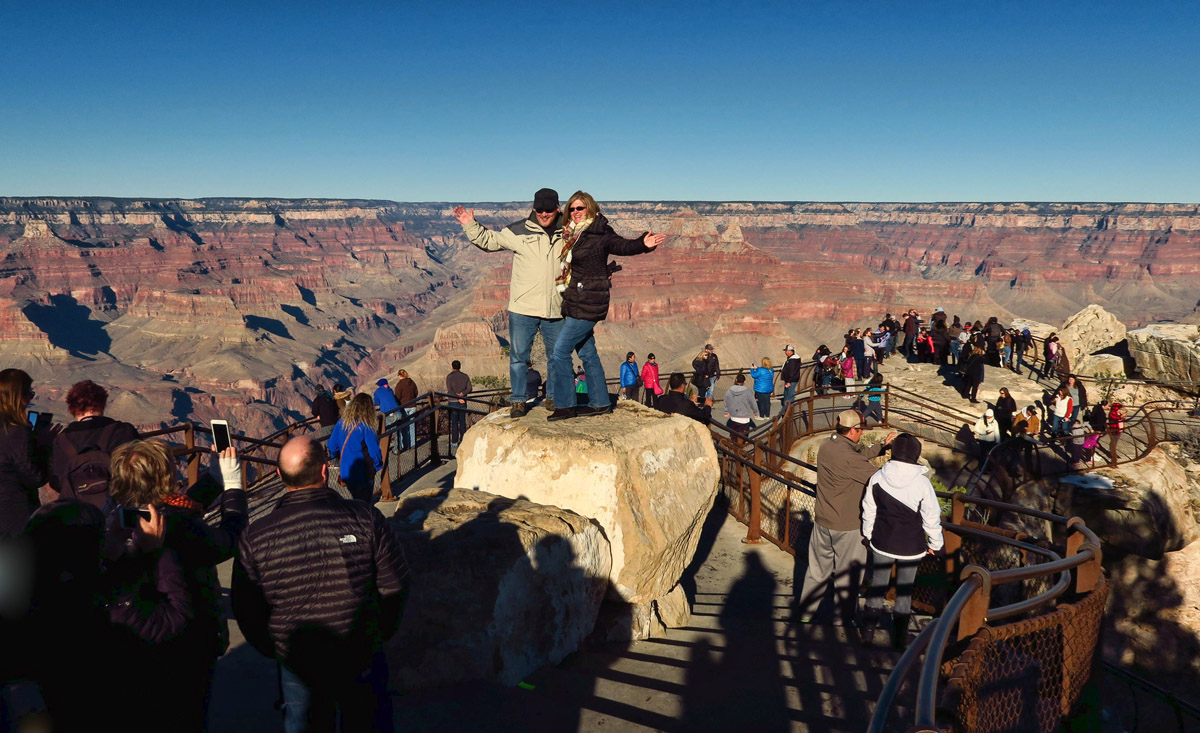 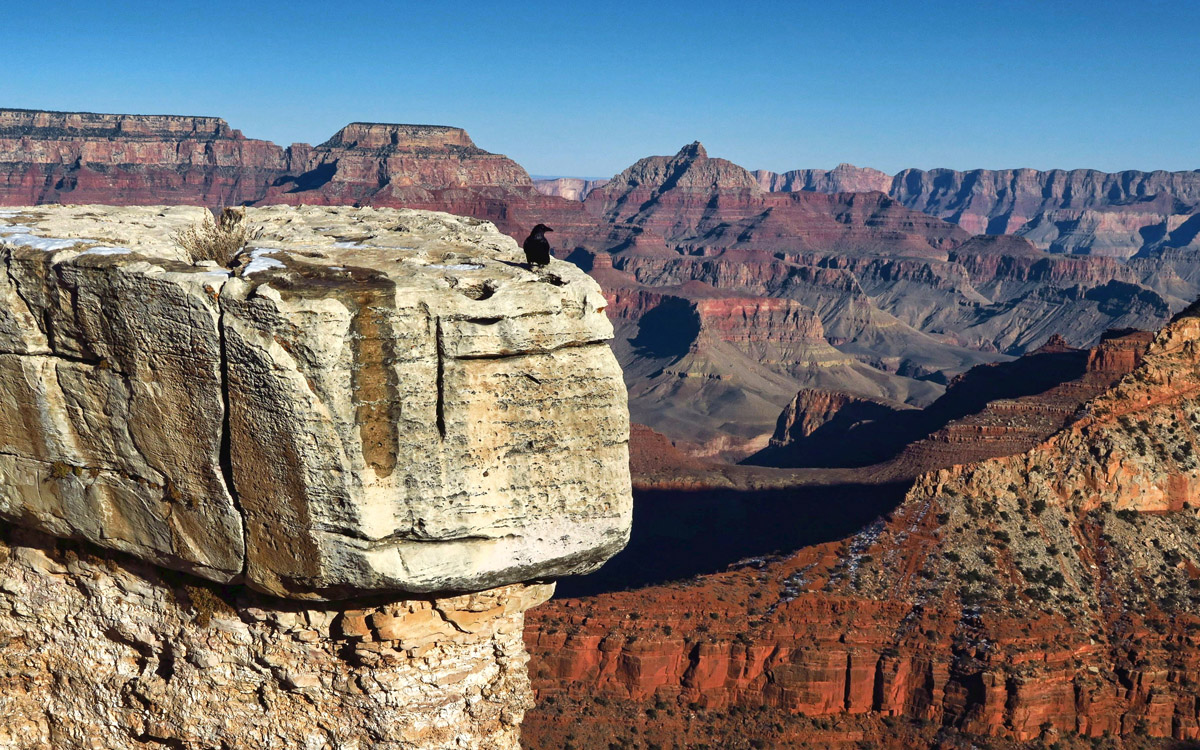 A Raven gets his rim shot. 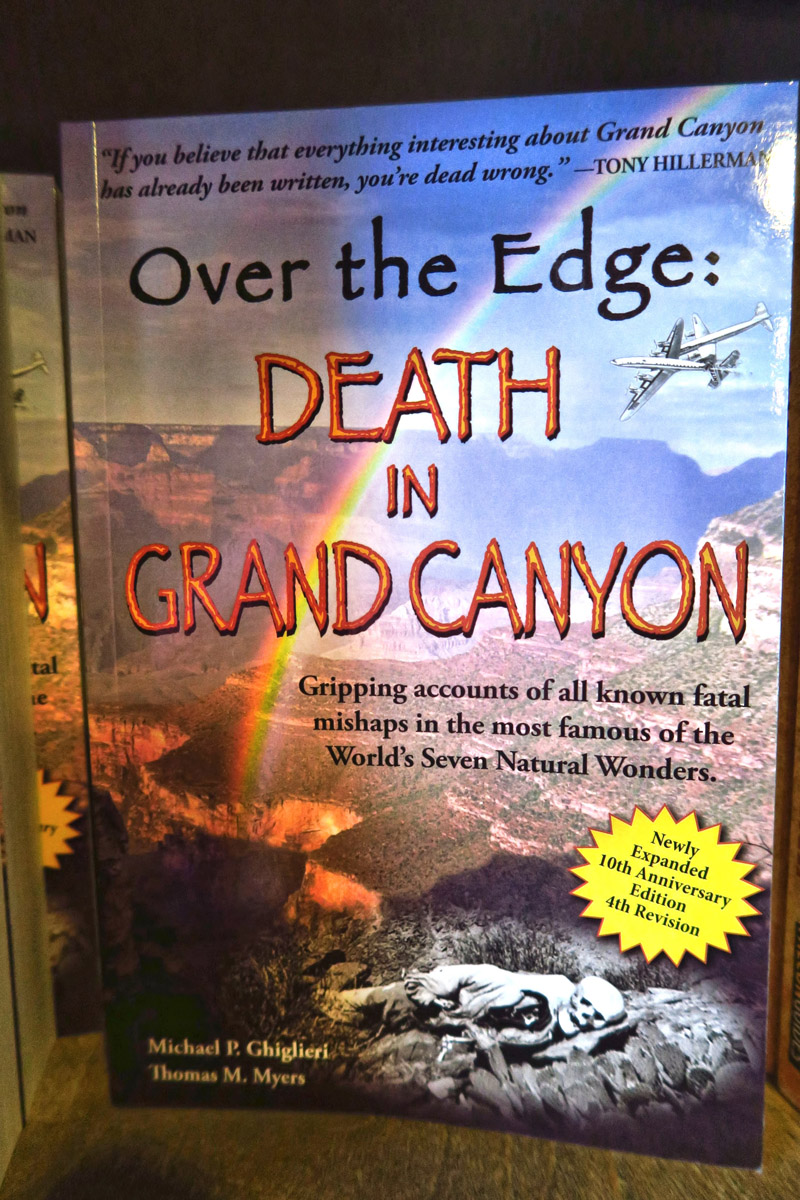 Not only does he reinforce the statistic that only 1% of the five million visitors travel below the rim, but he tells me the remaining 99% spend an average of 15 minutes at the rim.   Fifteen minutes. At first, I find this inconceivable.   The Grand Canyon is not exactly a drive-by stop.   One must drive at least an hour from I-40 to get to the rim.   Could it be true that people would go to all that effort, walk to the edge, snap a few selfies, and then drive away? 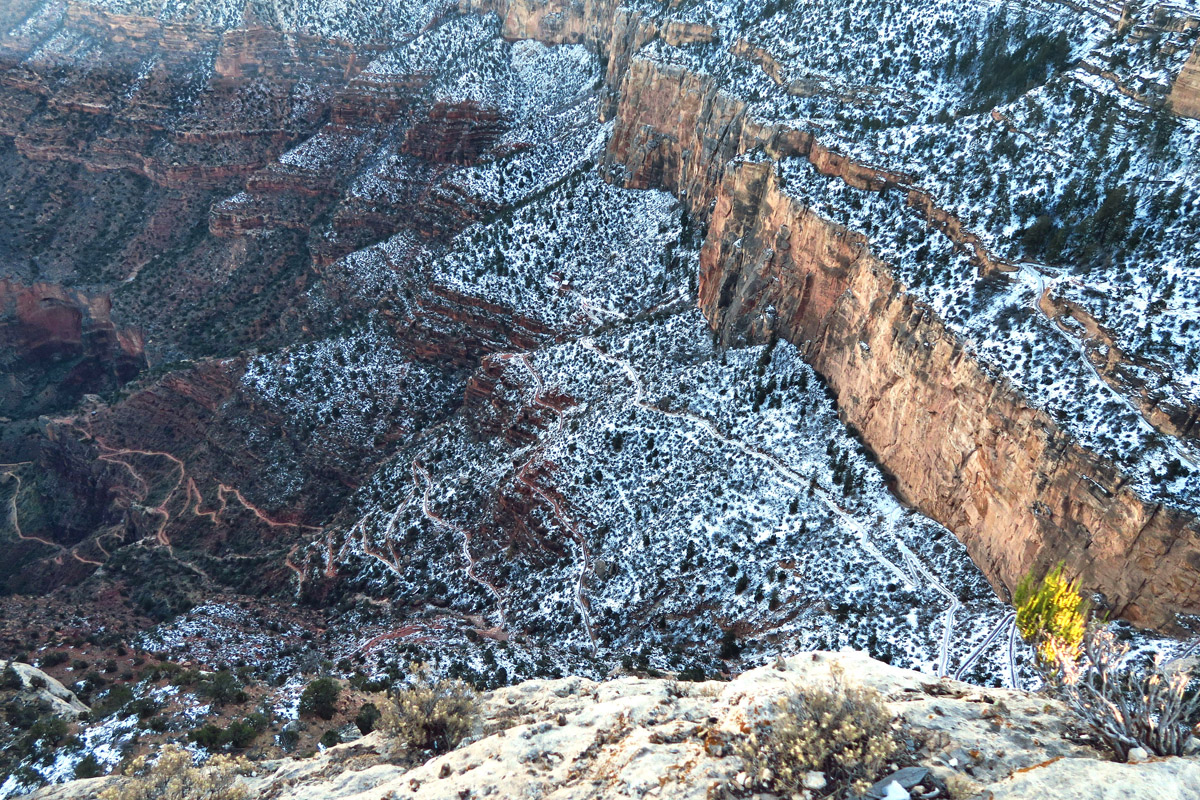 I return to the scene where a stop along Hermit Road overlooks the Bright Angel Trail. Looking at the switchbacks (far right lower corner) and following the trail on down make both my feet AND my stomach ache! 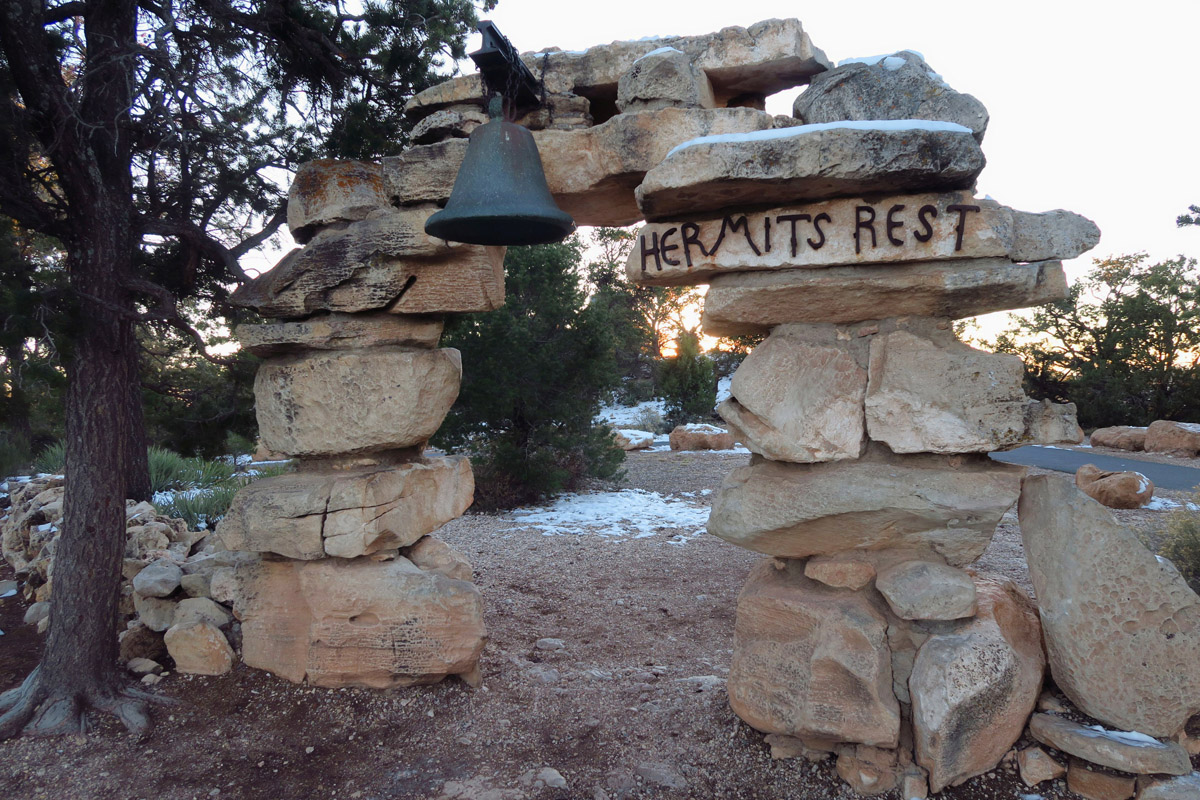 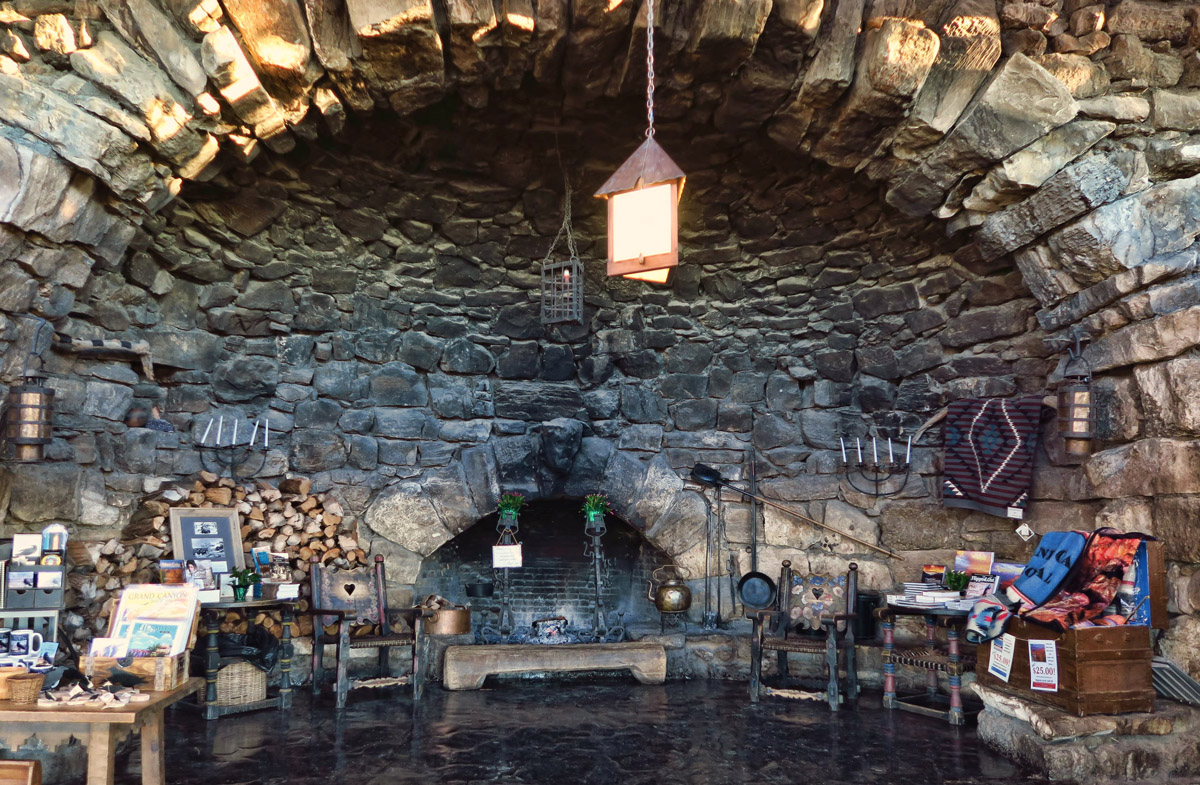 Beautiful fireplace in Hermit’s Rest, one of four Mary Colter Buildings on the National Register of Historic Places.

But then, I remembered…I was once that tourist.  In 1995, I attended an American Express sales meeting in Phoenix.  While sitting around the conference table as the days meeting was wrapping up, someone mentioned the Grand Canyon, and a discussion ensued.  Who had seen it?  Who had never been?  Before you know it, one of those crazy plans was in full swing.  We would rent a car, stay at a hostel in Flagstaff, and be back by morning….If we spent fifteen minutes there, that was a stretch.  We dubbed ourselves the “GC5,” a moniker that stuck between four co-workers and our Continental Airlines Sales Rep, bonded over a 24 hour escape from the conference room with only the forgotten film in the 35mm canister to solidify our reputation among the remainder of our teammates as “the crazy ones.” 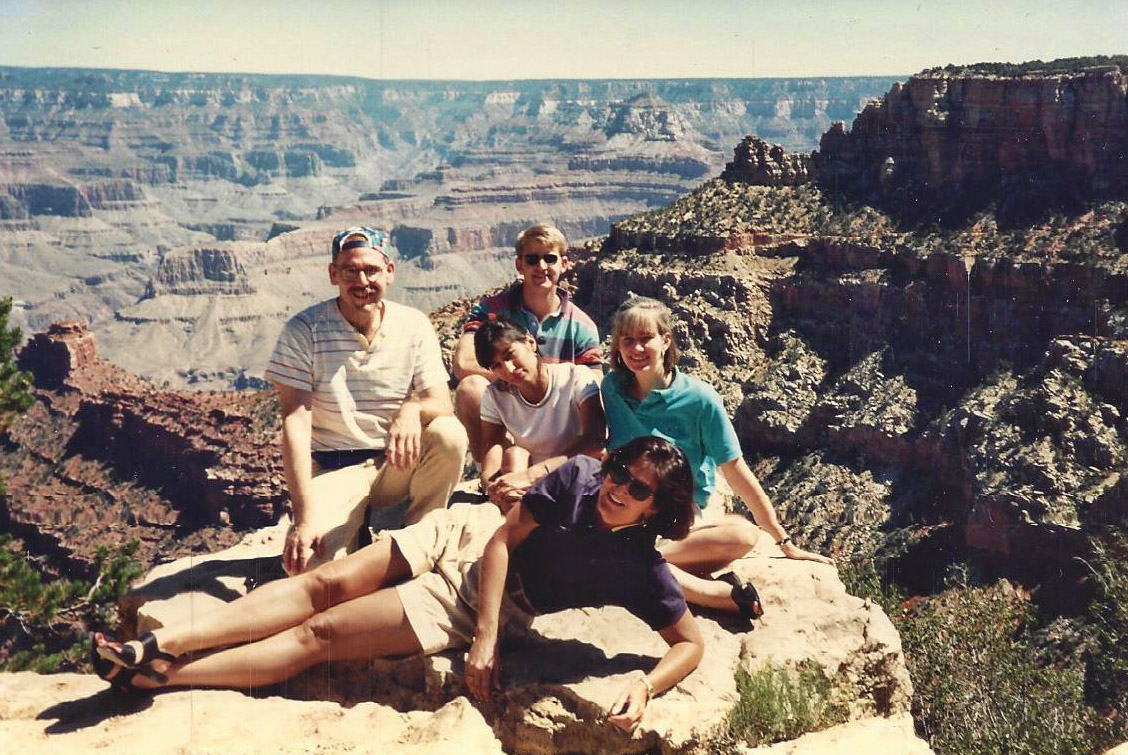 Aside from one other visit on a family vacation when I was twelve, that was it.  So I figure another day on the rim can’t hurt.  There’s an art show going on in Kolb Studio with many of the same artists I met in Zion.   It’s fun to see the Grand Canyon in their same styles, after watching them paint Zion Canyon. 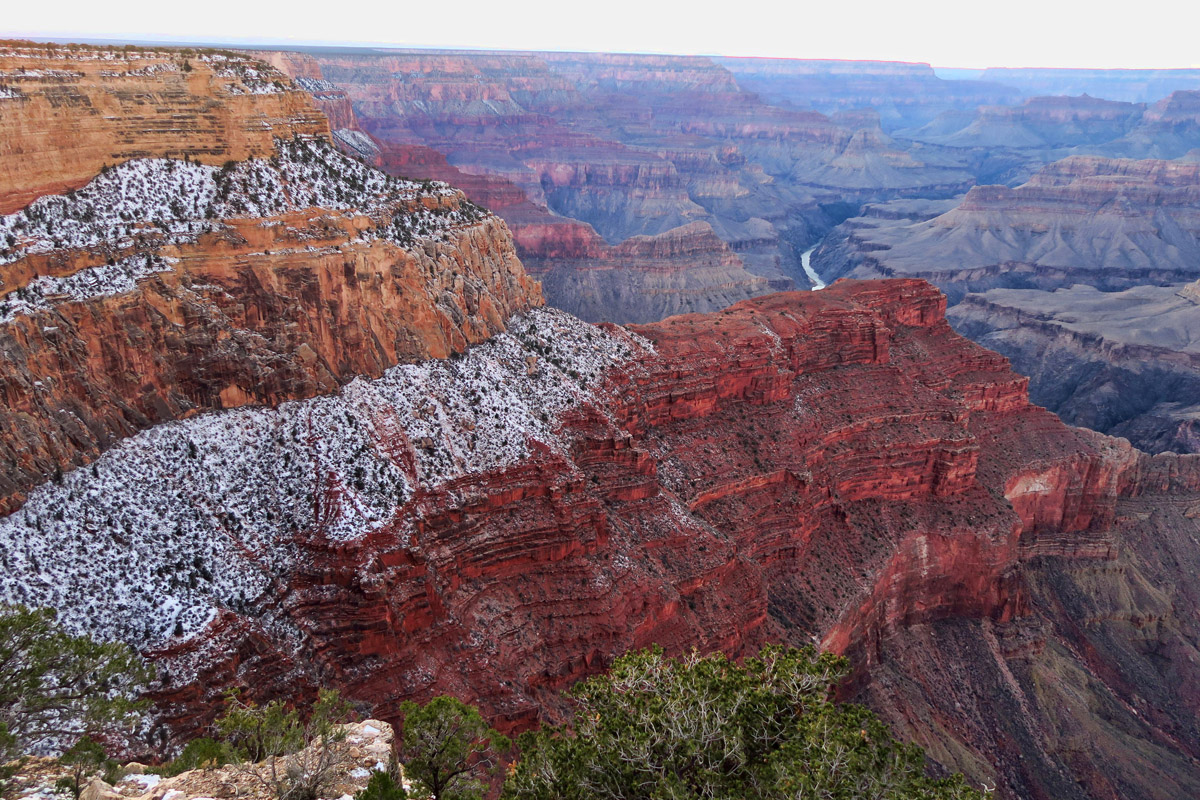 View of a sliver of the river from Mojave Point along Hermit Road. 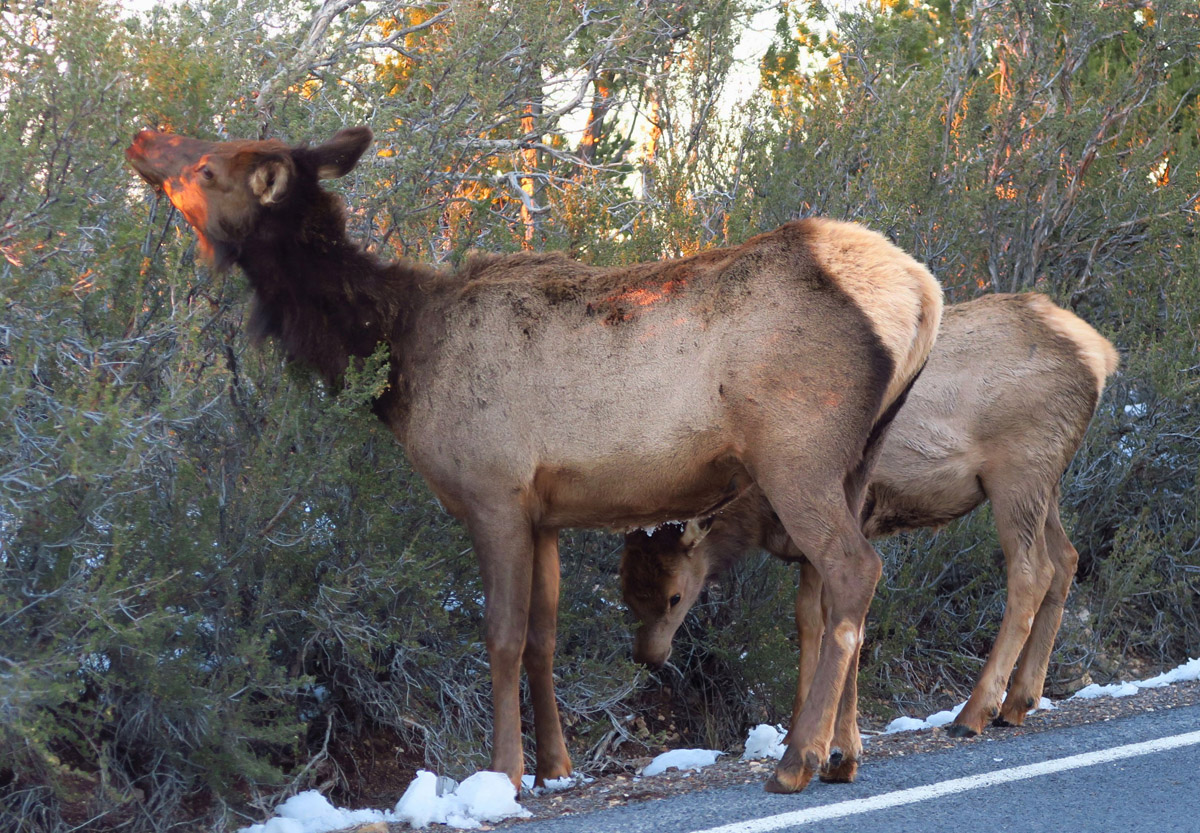 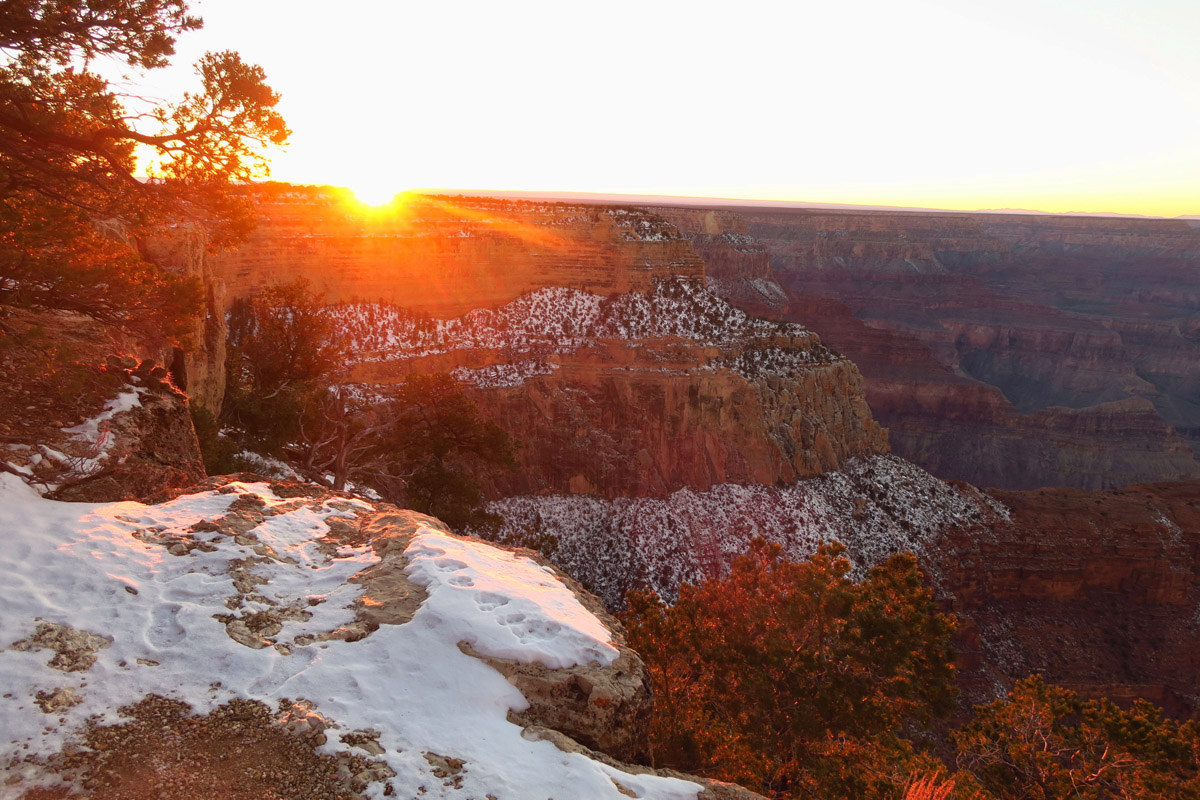 Sunset over the canyon from Hopi Point along Hermit Road.

The shuttle to Hermit’s Rest stopped running December 1st, which means cars can now drive the eight mile scenic Hermit’s Road along the rim.  By now, the roads are dry, so I decide to drive this road at sunset.   But the more interesting show turns out to be the people getting in their fifteen minutes along the rim.  I ponder the question, “How close is ‘close enough?”  There’s still a good bit of ice and snow on the rim, yet people seem determined to park their tripods (or worse, their butts!) right on the overhang.  Does that extra few inches edging out toward the abyss really make that much difference in a photo? So I sit there on the concrete wall, one eye on the setting sun, the other eye watching for falling objects.  😉 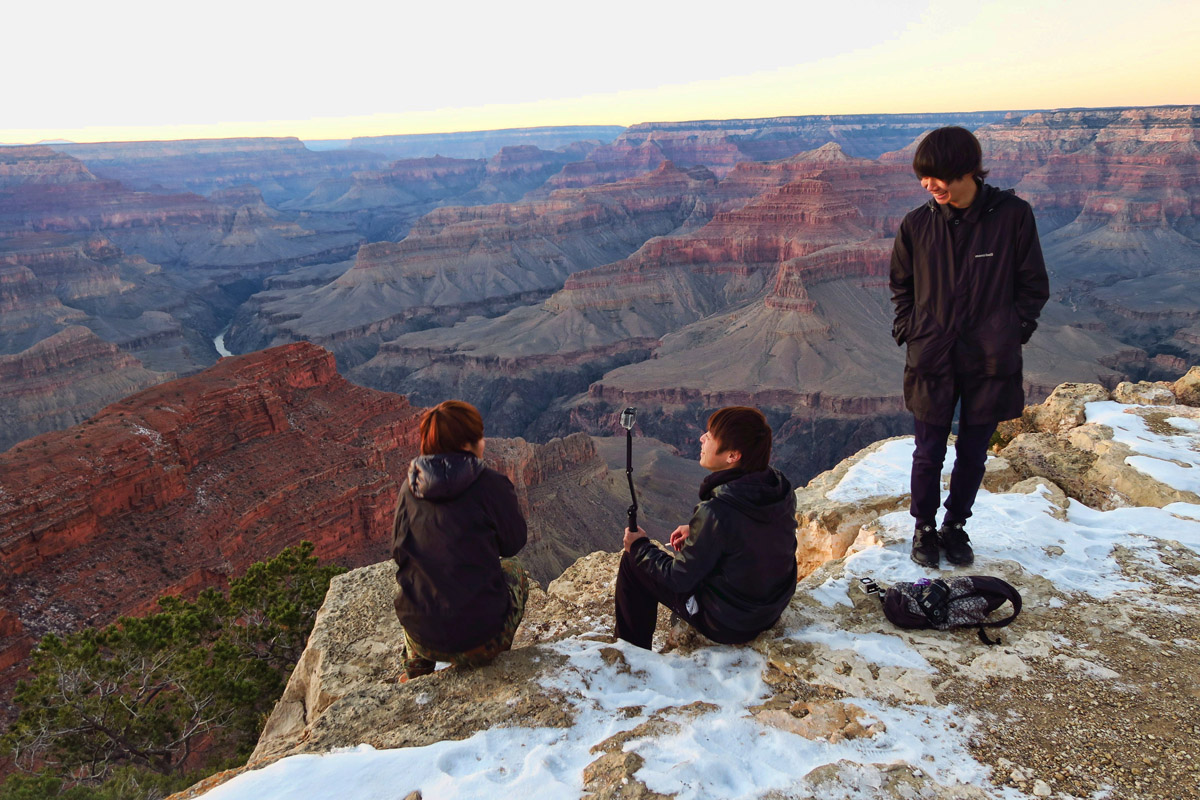 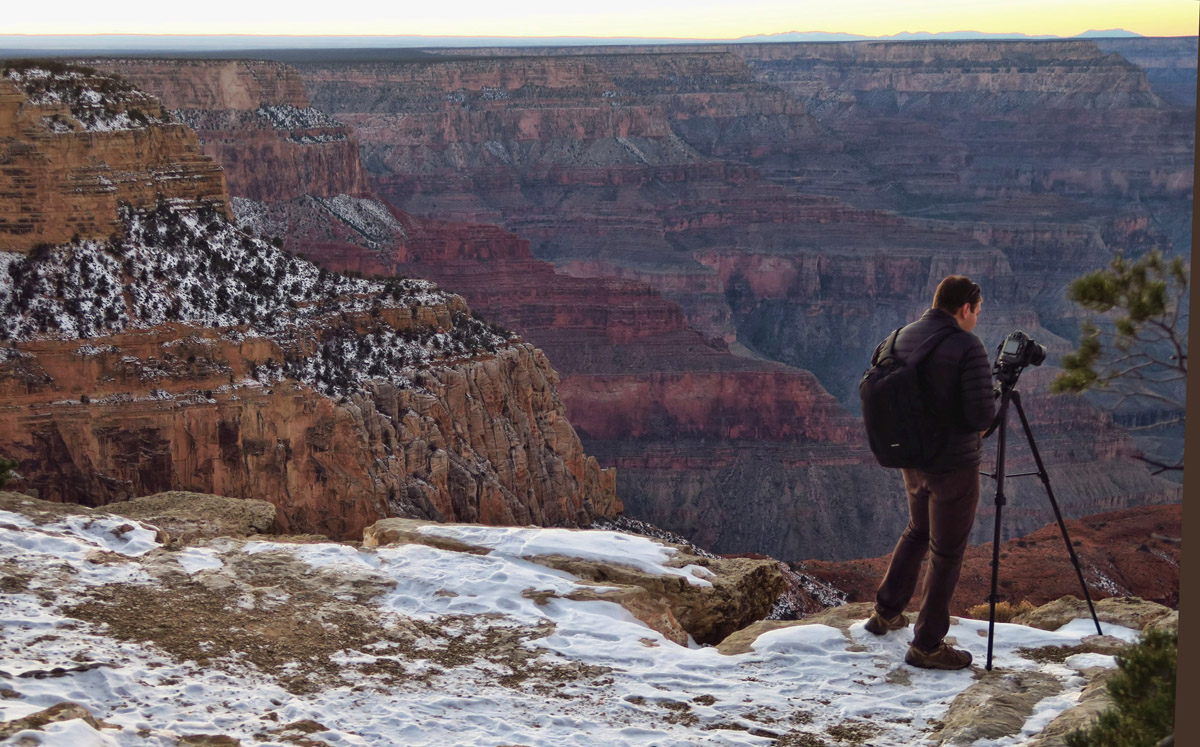 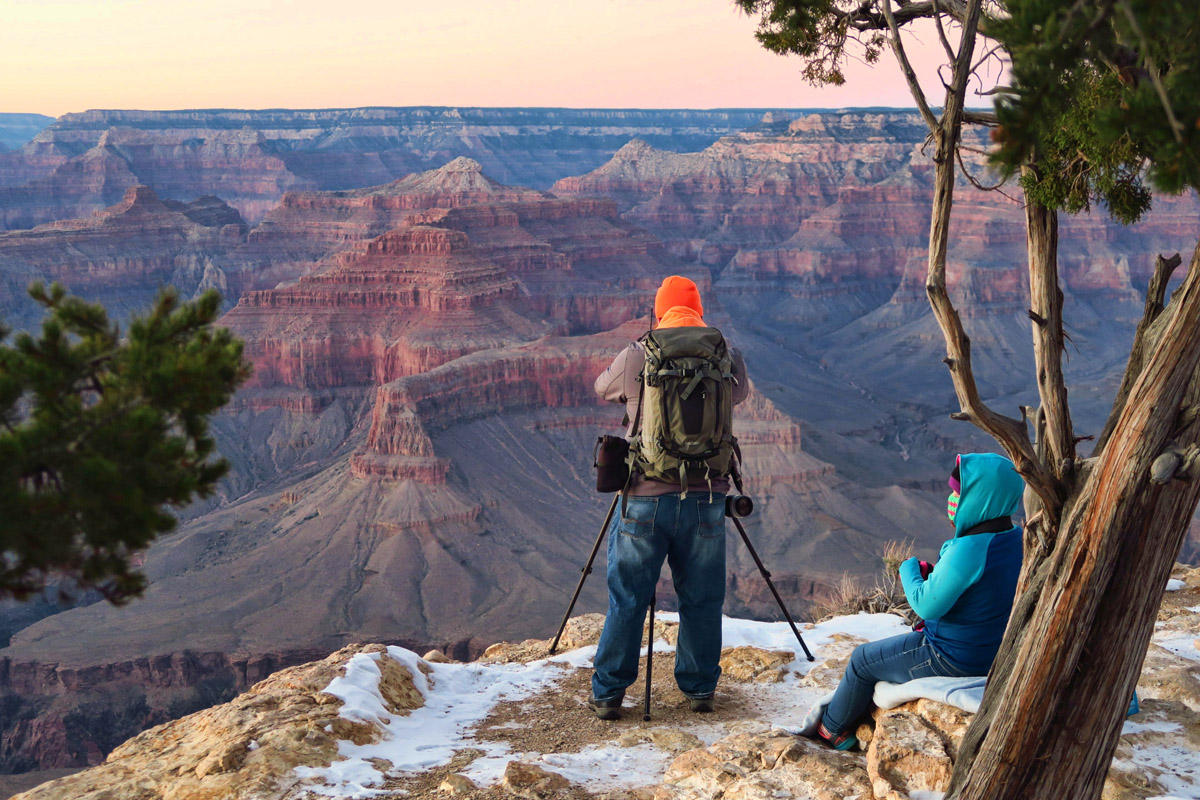 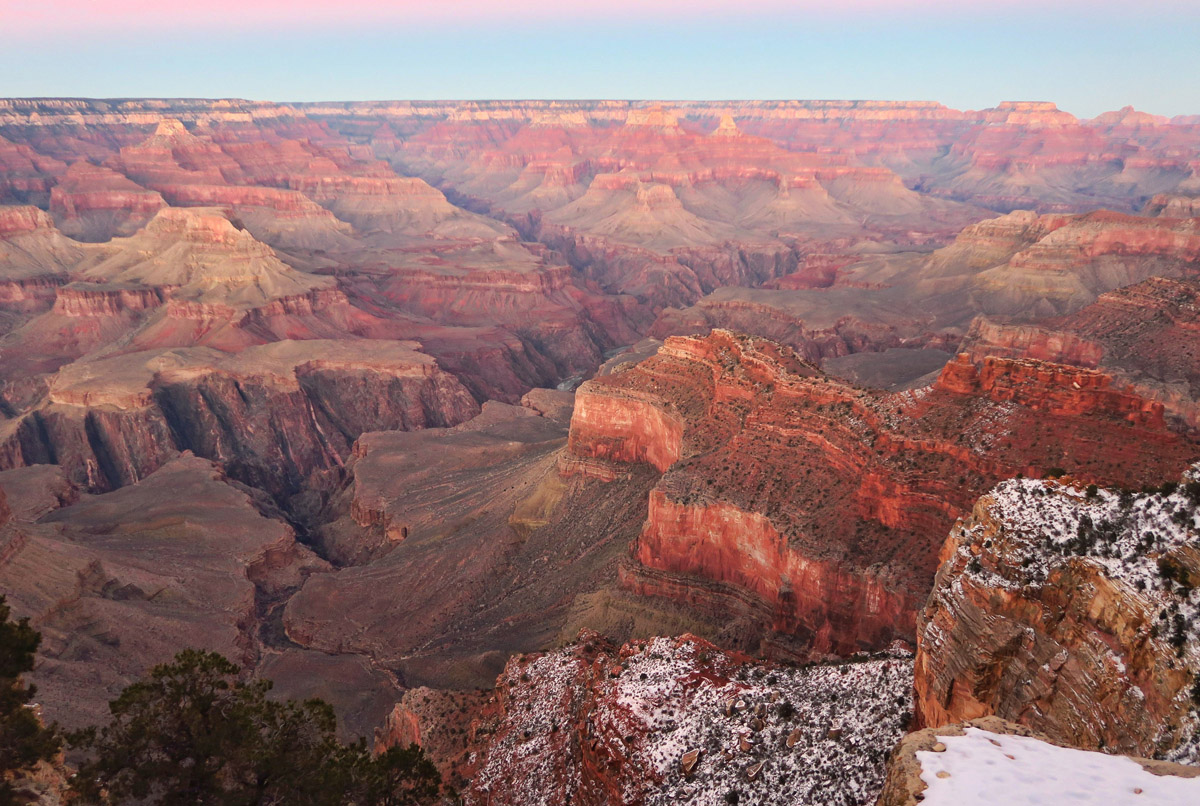 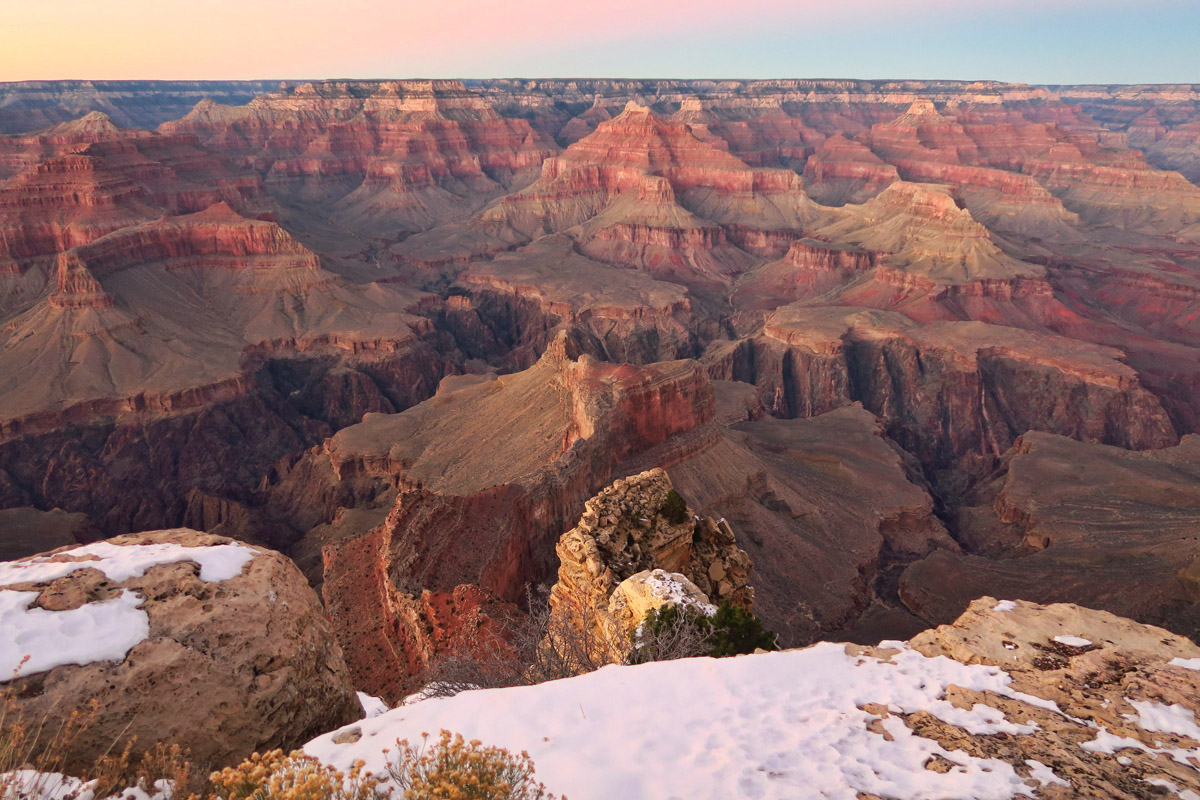 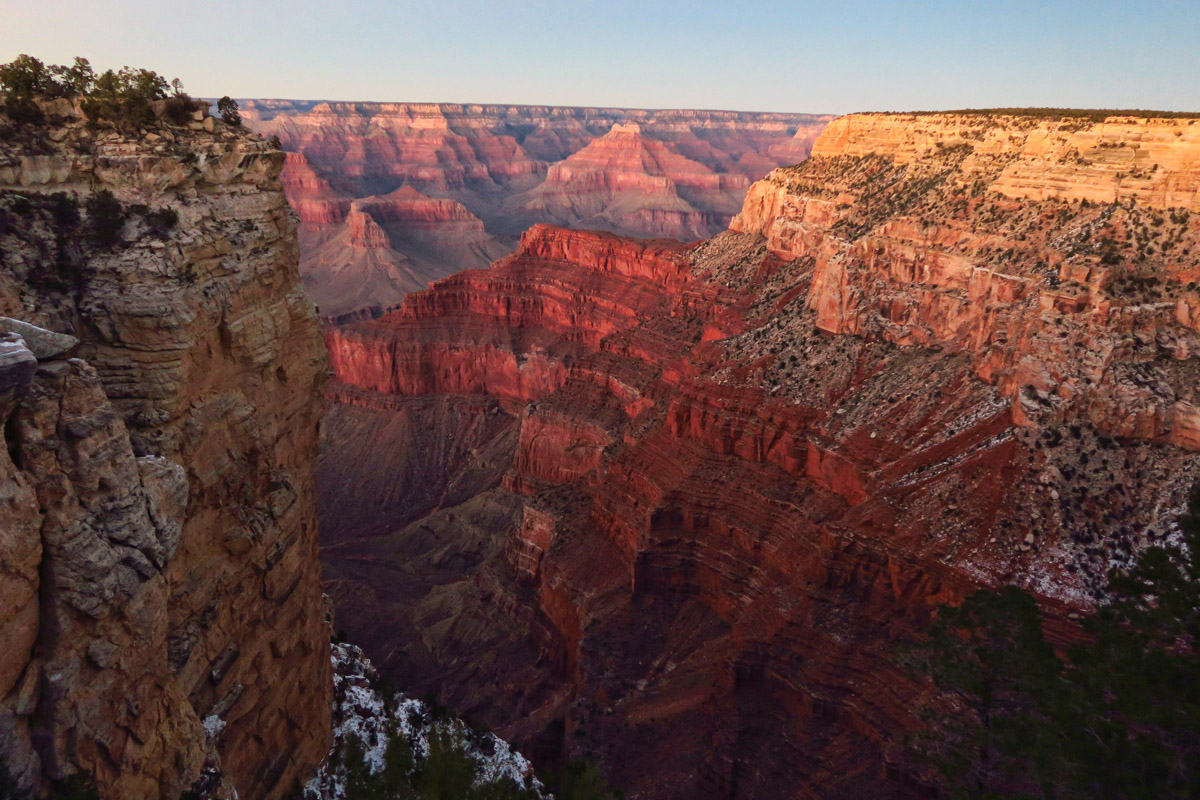 I wish all my friends and followers of the TTTH blog a very “Merry, Happy, Feliz, Joyous” whatever adjective best fits your festivity and warms your heart. Your support and comments throughout the year have each been a special gift to me, making me smile, while keeping me company on the road. I am grateful for your friendship and fellowship.

May your holidays be filled with love and laughter, joy and light, and the greatest “gift” of all…good health.

30 thoughts on “One Last Look Over the Rim”