The US Dept of Interior recently posted on Facebook, “Moonlight brightens snowy dunes at Great Sand Dunes National Park and Preserve in Colorado. Experience the park after dark by stargazing, listening for owls along the foothills or going for a full moon walk on the dunes. Cold temperatures are the norm in winter, so bundle up with warm clothing and sturdy footwear for an unforgettable nighttime adventure.”

I find this an odd promotion, considering the park is miles from nowhere, and they have closed the one and only campground within the park.  Couple that with the fact that the National Park Service warns about the danger of herds of free range elk and deer that frequent the highway leading into the park after dark, and I’m left scratching my head, wondering why they chose to promote the park as an “unforgettable nighttime adventure.” 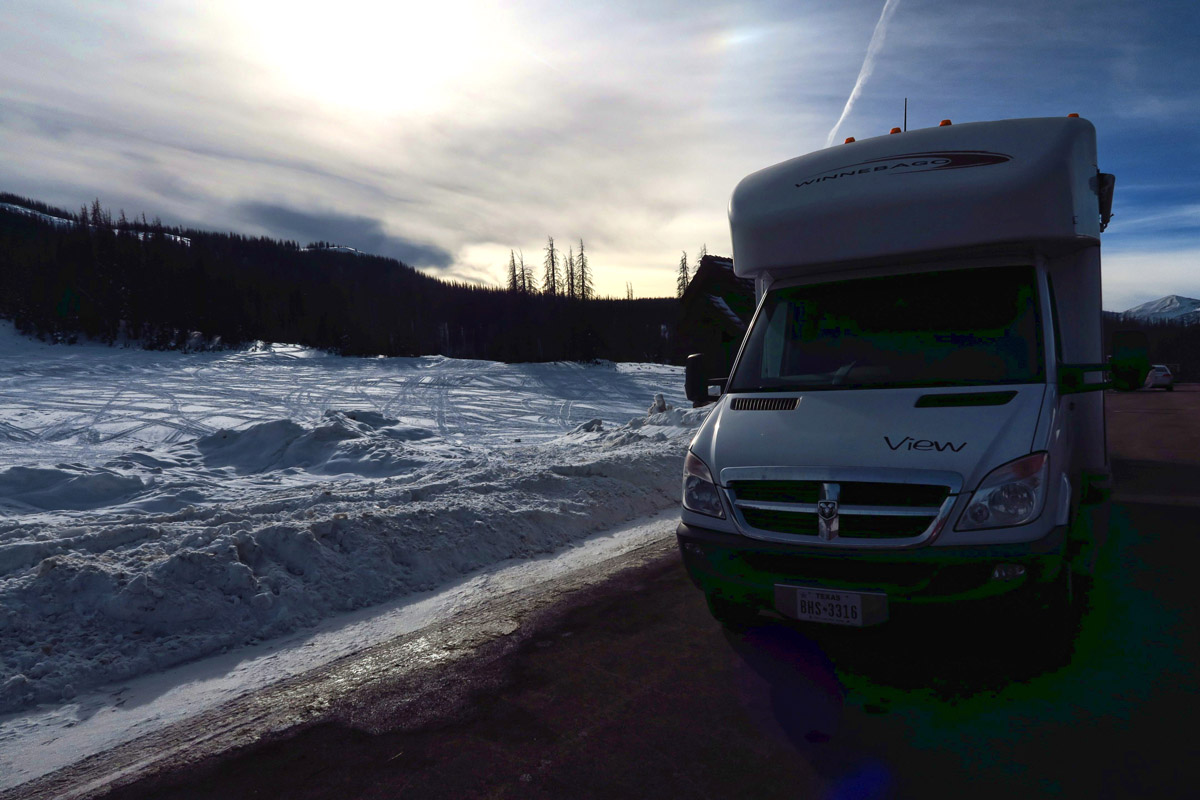 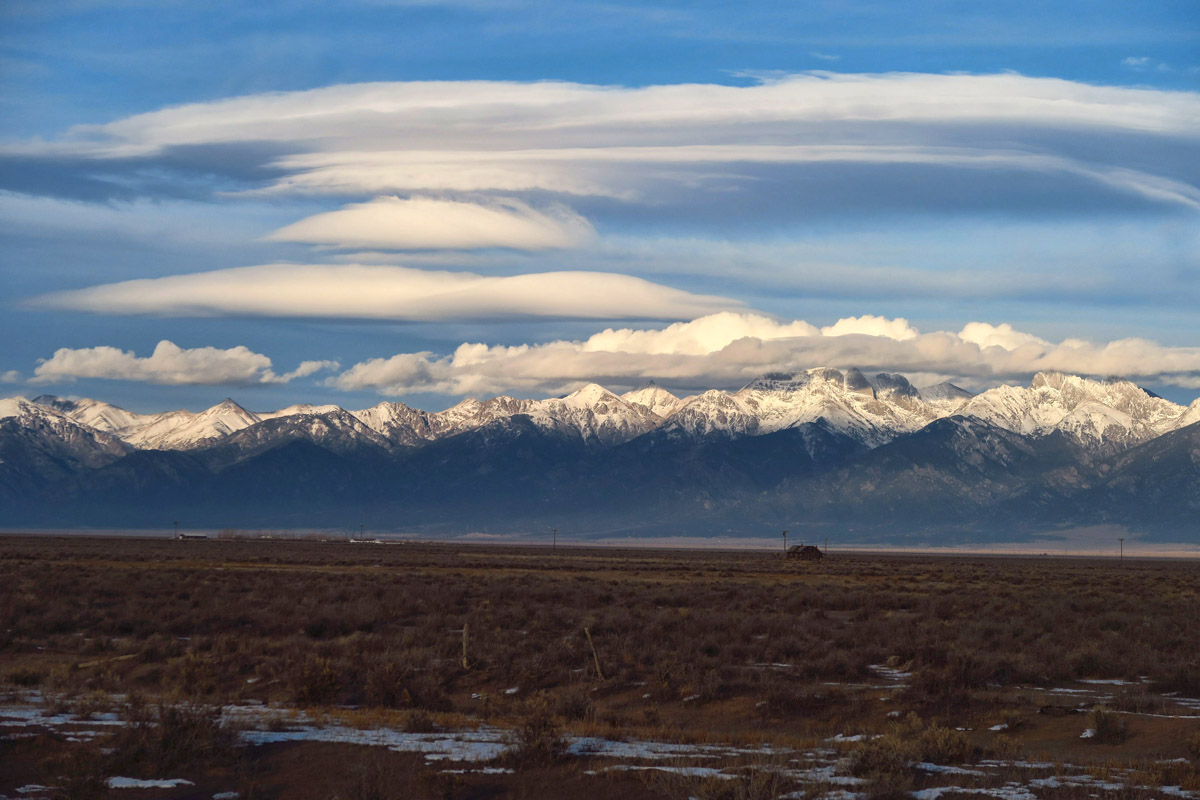 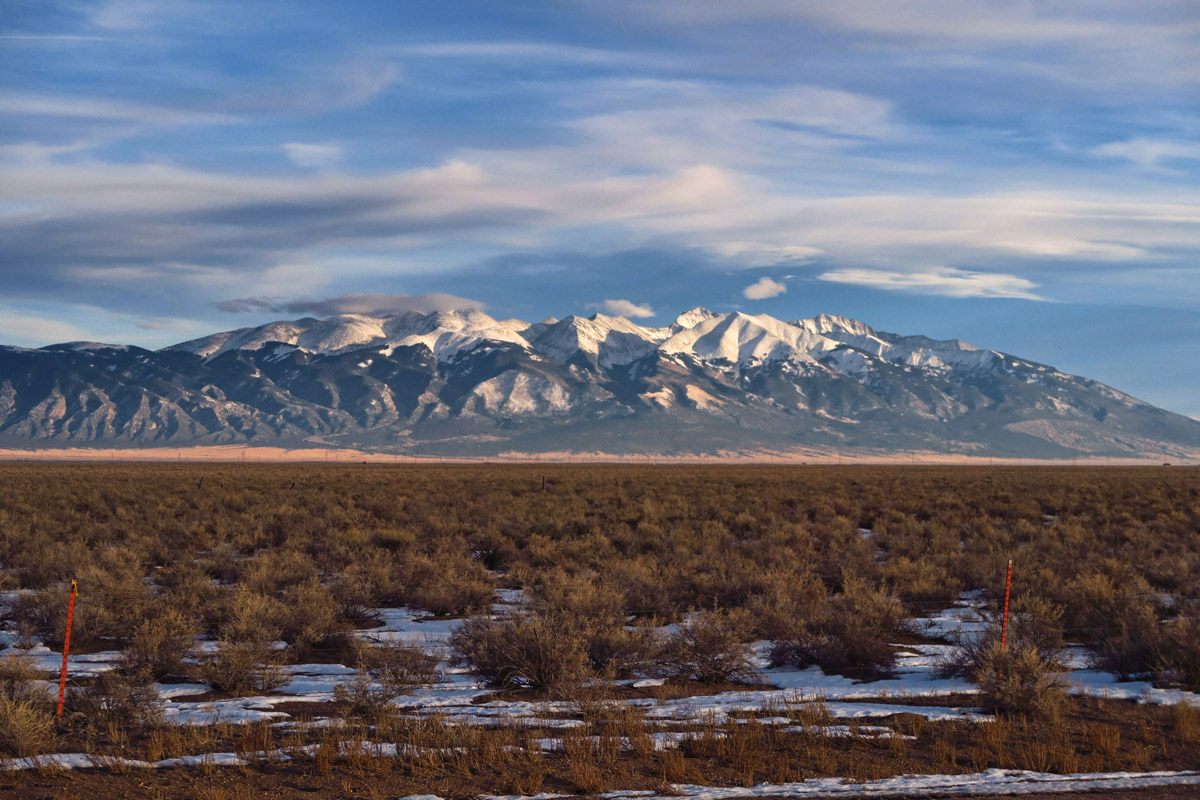 Sand dunes begin to appear on the approach via the long, lonely road.

The Great Sand Dunes Visitor Center has a generous amount of long, level, enticing RV parking spaces, as does the large Dune Field parking area.   I asked if I could stay there overnight, but was told no, there was not adequate personnel.    I was told if I tried, a ranger would be along after midnight to extract me.   But if there is sufficient personnel to run me out of the park, it’s hard to understand why a fully self-contained RV would be a problem.  Or why a small loop of the campground couldn’t have been left open.

Instead, the ranger at the Visitor Center suggested I use the turnouts outside the park boundary.    That was better than the answer I got from the monitor of the Department of the Interior Facebook page who suggested “backpacking in the dunes.”   In 30 degree weather. 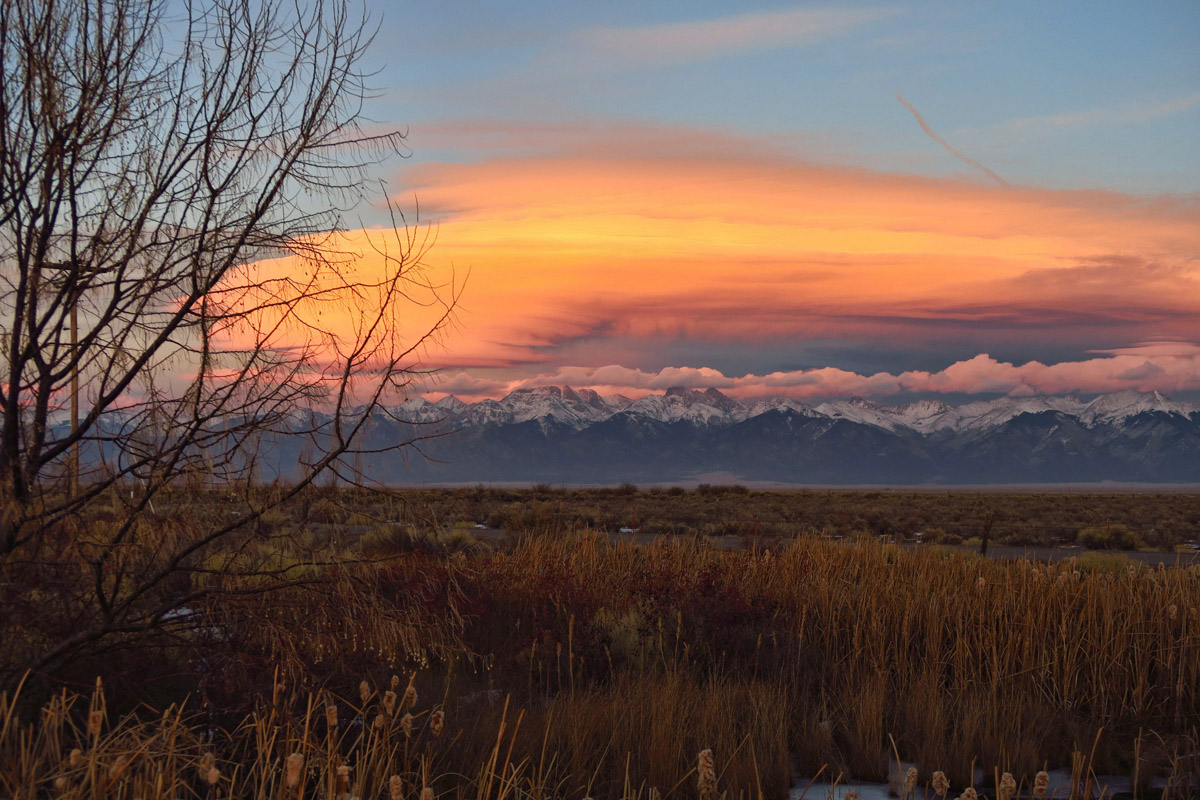 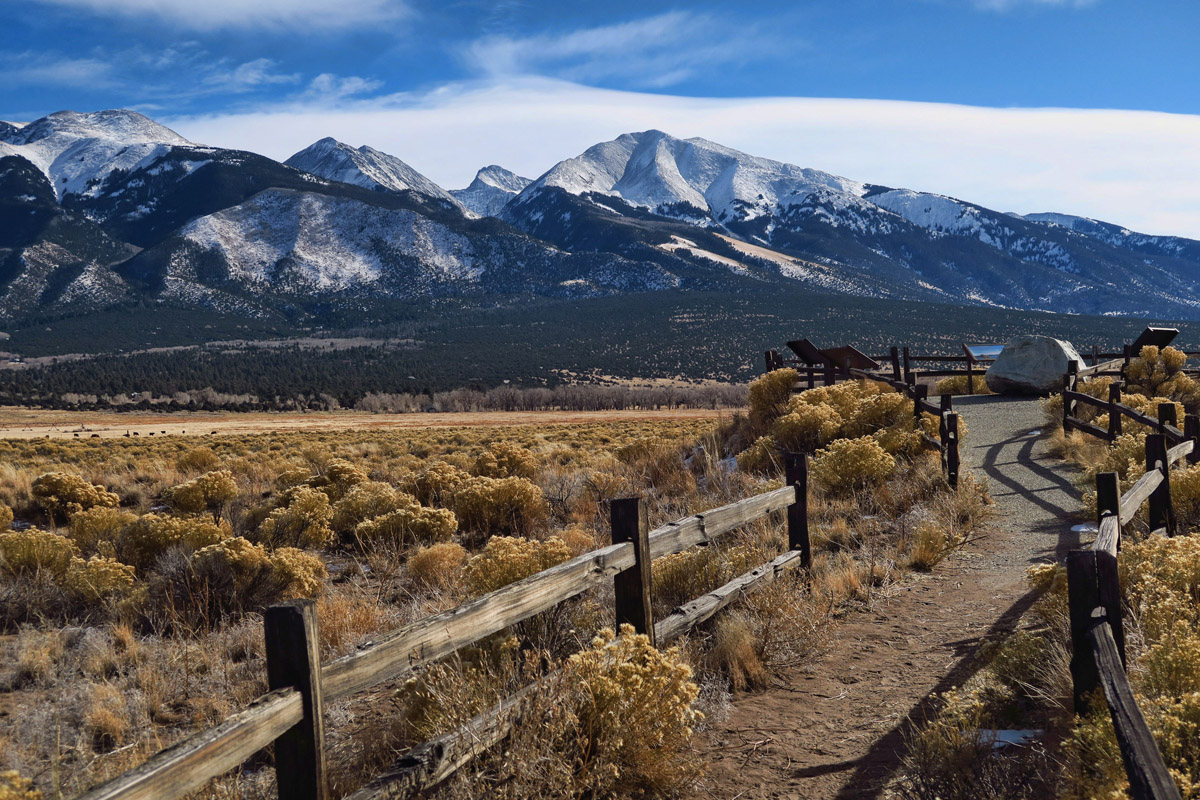 Information boards at turnout explain the “sand sheet” which lies between the salt flats and dunefield. 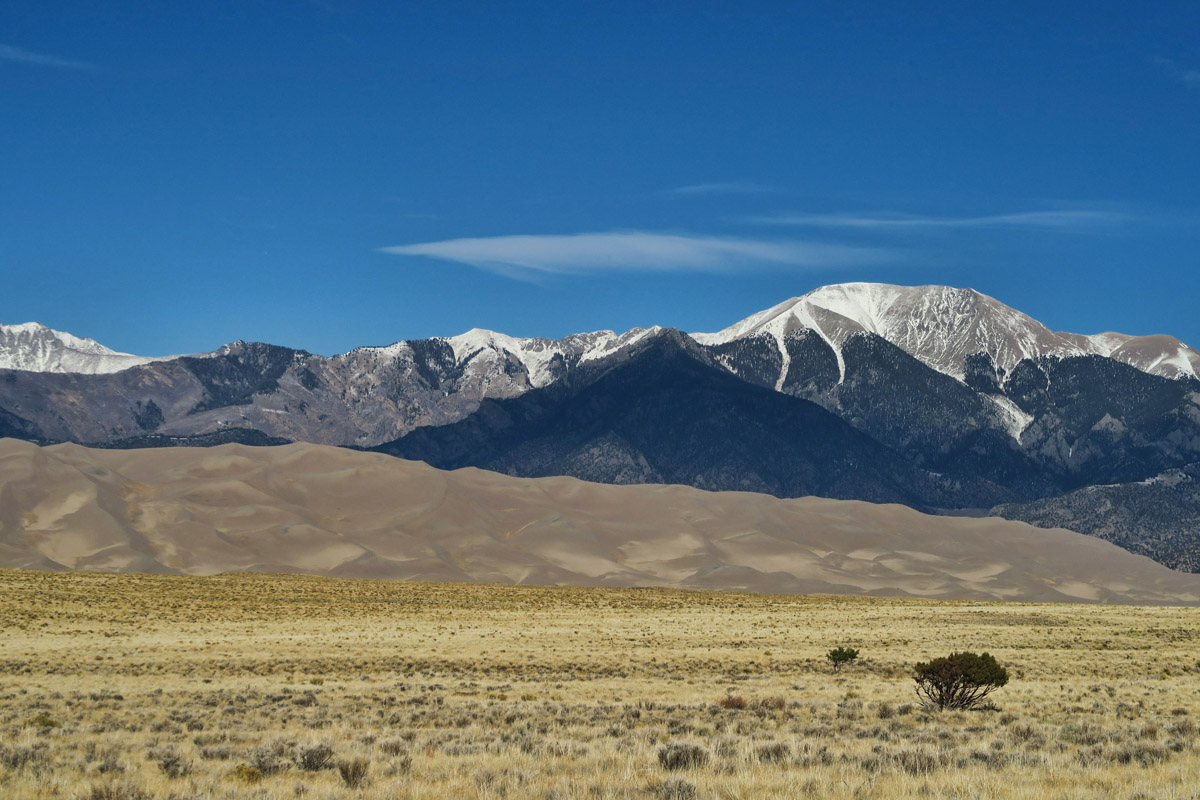 Lassen Volcanic in northern California offers the perfect solution.  During the months that the campground is closed, they will allow fully self-contained vehicles to overnight in the Visitor Center parking lot for $10 per night.   A “win-win” for everyone concerned.

Great Sand Dunes National Park is my last NP on the western side of the Lower 48 left to cross off my list.  I know mid-December is not exactly visiting at the ideal time, but it’s just about 30 miles out of the way of my direct path home for the holidaze.   So after a few days in one of my favorite US towns flowing with an eternal abundance of soothing, rejuvenating, cleansing hot water, Pagosa Springs, I set my sights on  one last bucket list item for 2016.

Given the situation mentioned above where there is no camping near the national park, I research options that are still open this late in the year that will offer more than a plug on the post.   Prices in the area are high, even in those locations that offer a dry camping option.   It’s tough for me to pony up twenty bucks for nothing more than a parking place in a gravel parking lot, particularly in the wide open spaces such as the San Luis Valley.

But then, I stumble across the quirky “Sand Dunes Swimming Pool and Campground” 30 miles away.  It would still cost me $20 to dry camp, but it includes half off admission to the giant spring-fed 99-degree swimming pool, complete with view of the snow capped Sangre de Cristos mountains as a scenic backdrop, visible through the rising steam off the hot springs.  There is also a restaurant onsite, a plus considering the remote location and my limited cooking abilities following winterization. 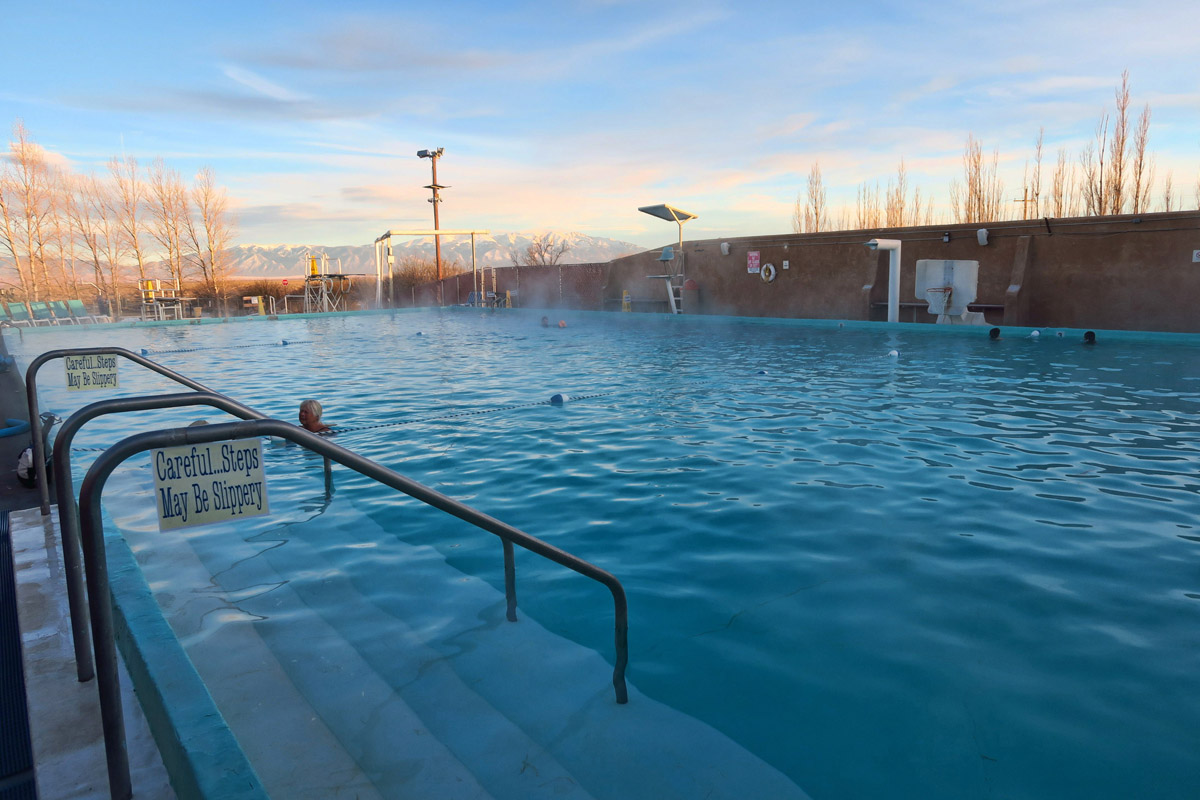 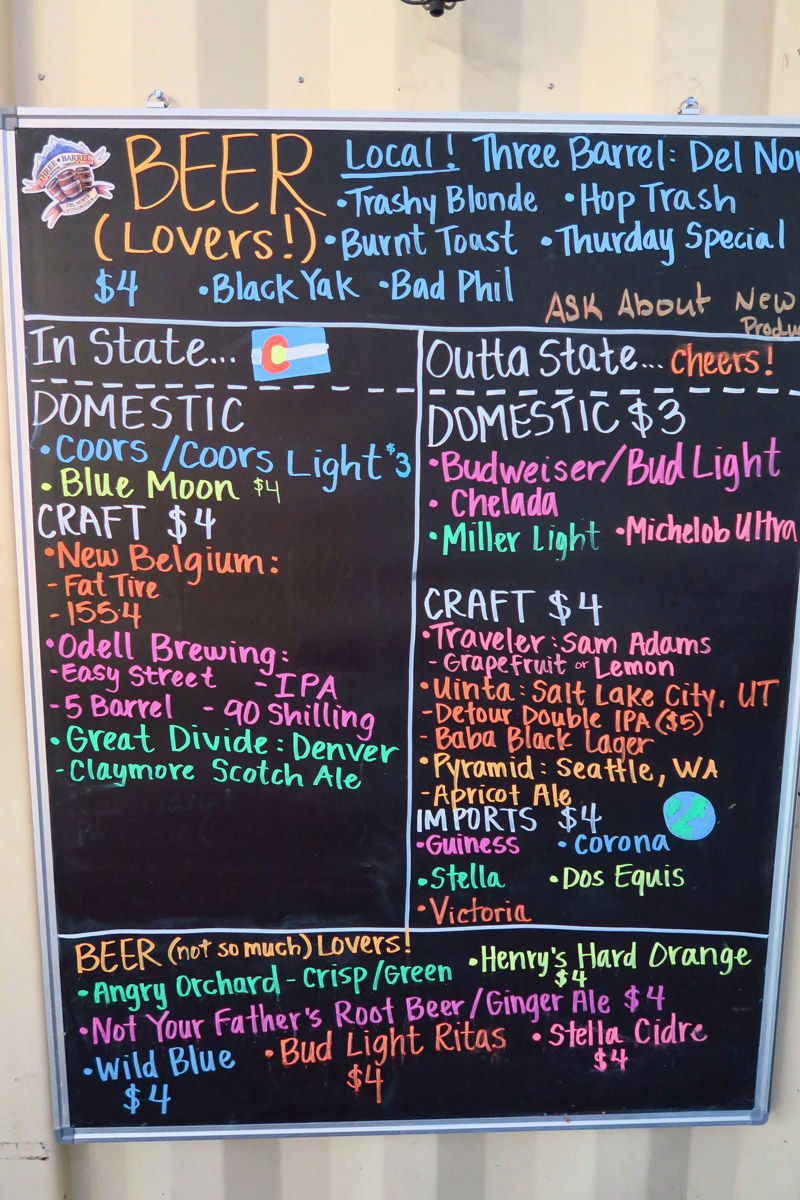 A decent beer selection for the middle of nowhere. 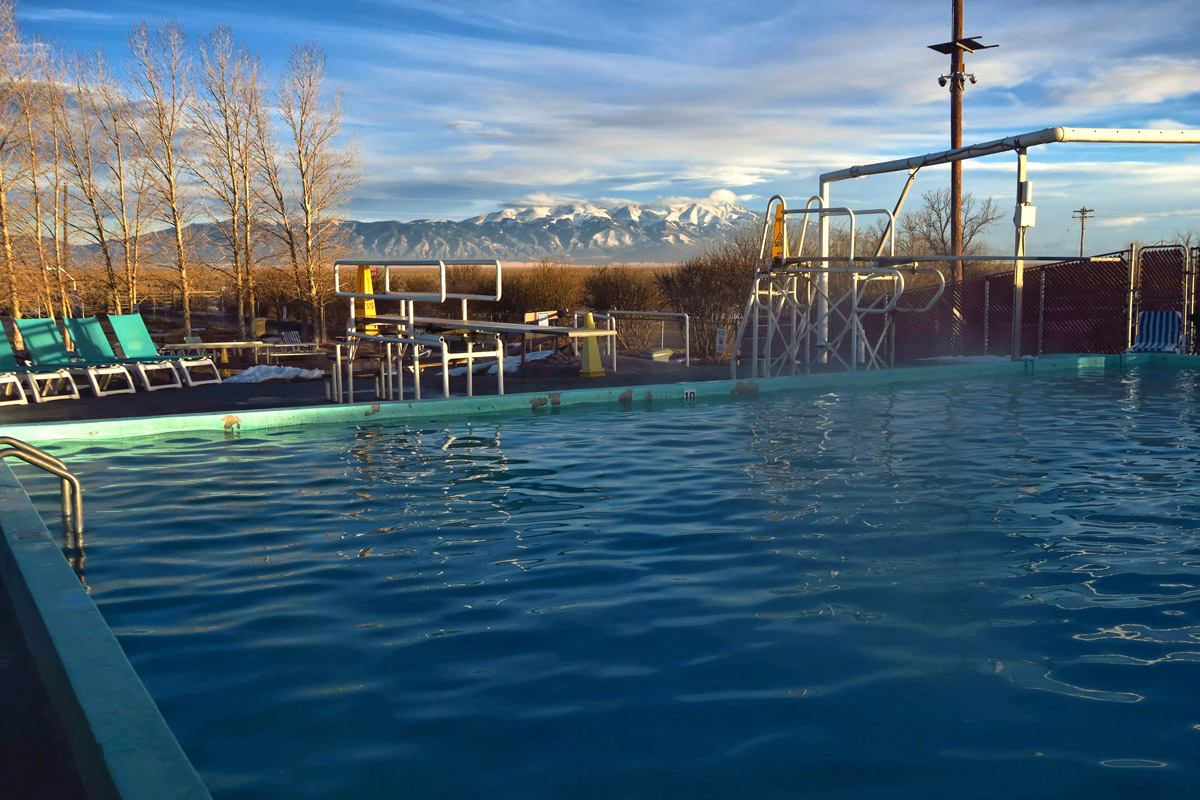 Swimming in the big pool offers a nice view of the Sangre de Cristos mountains.

I pay the extra $3 for admission to “The Greenhouse,” a 21 and older section of the hot springs.  The tropical garden filled with pools of varying degrees has a bar offering a surprising variety of libations for such a remote location.   It’s a great venue if you don’t think about it too much.   But it’s a 50 yard walk down a long, cold, tunnel to reach the greenhouse, which has no toilets.  That means a long walk back to the main building when nature calls.   Looking around me at all the people soaking in the warm springs, some of them surrounded by multiple empty beer cans, I start to observe how many actually get out of the water during the hour or so I am soaking. ..a sobering realization as I make an early exit for the showers. 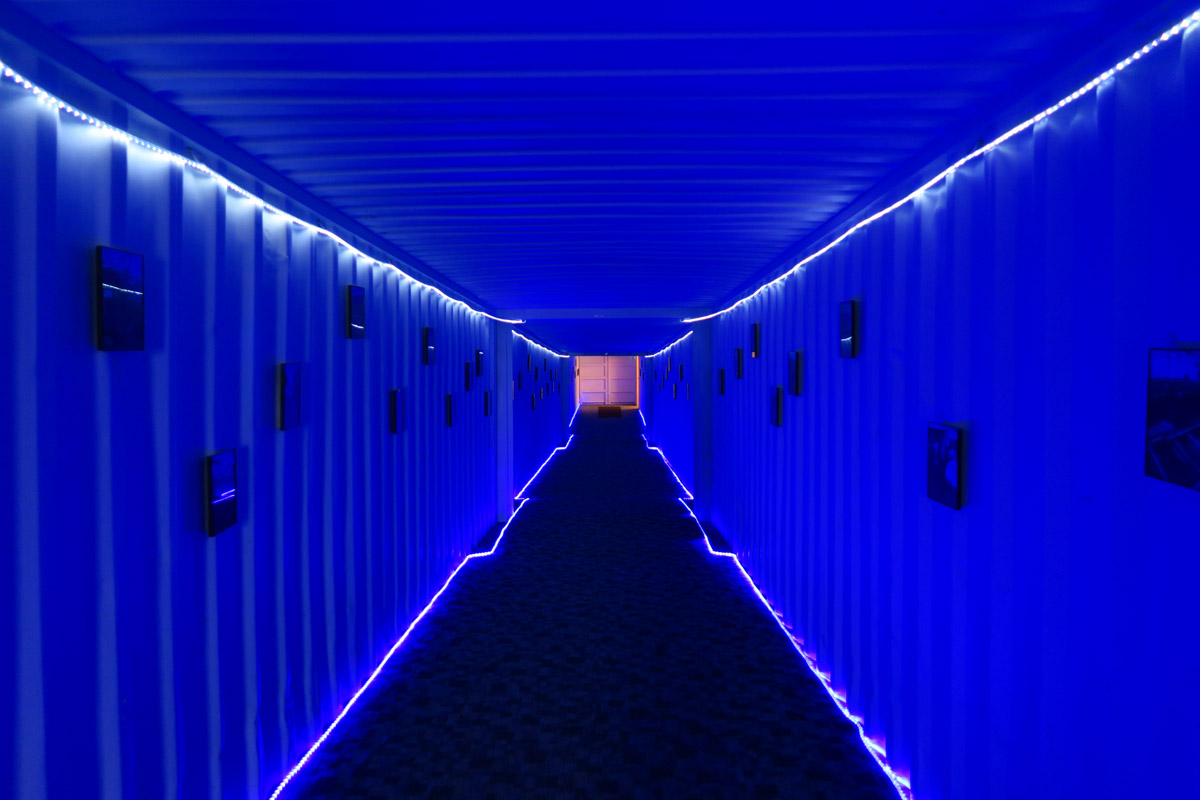 The long, cold, neon blue hallway from the main building to the Greenhouse. 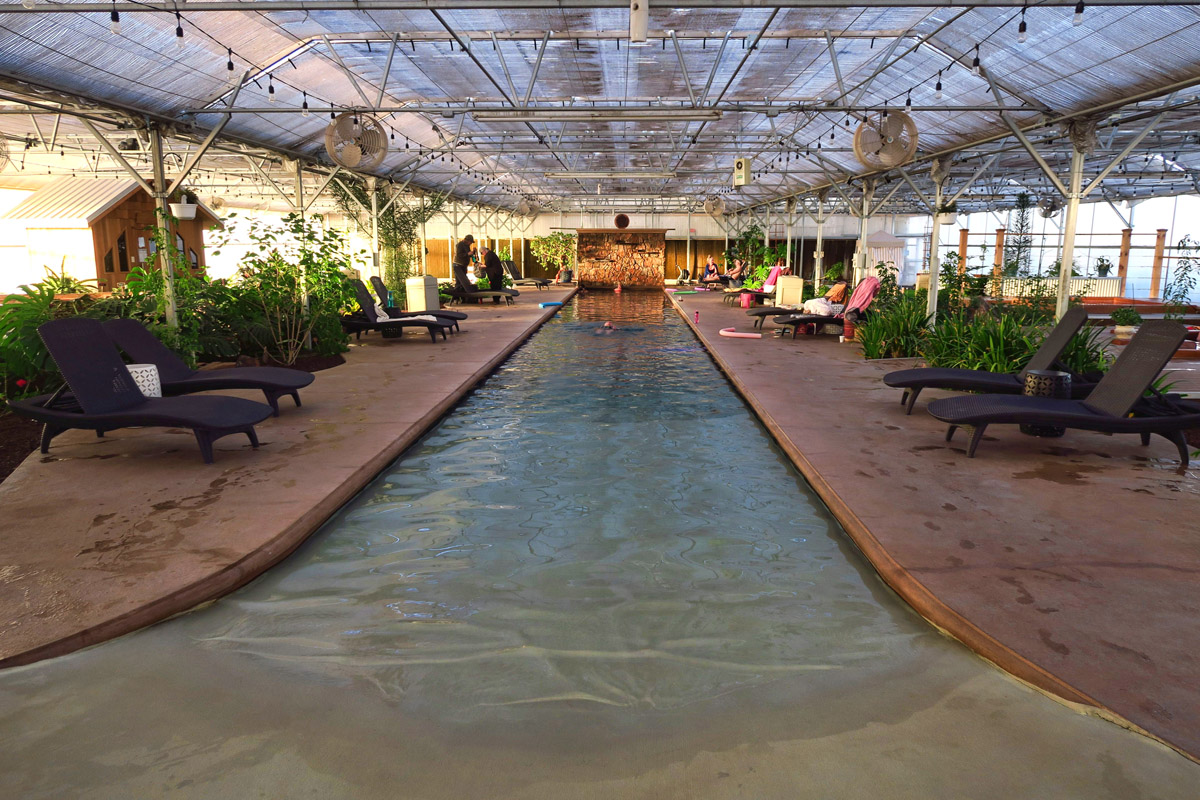 Lots of options for soaking in the Greenhouse, including this “Zero entry pool” which enables you to just walk in, increasing in depth as you walk. 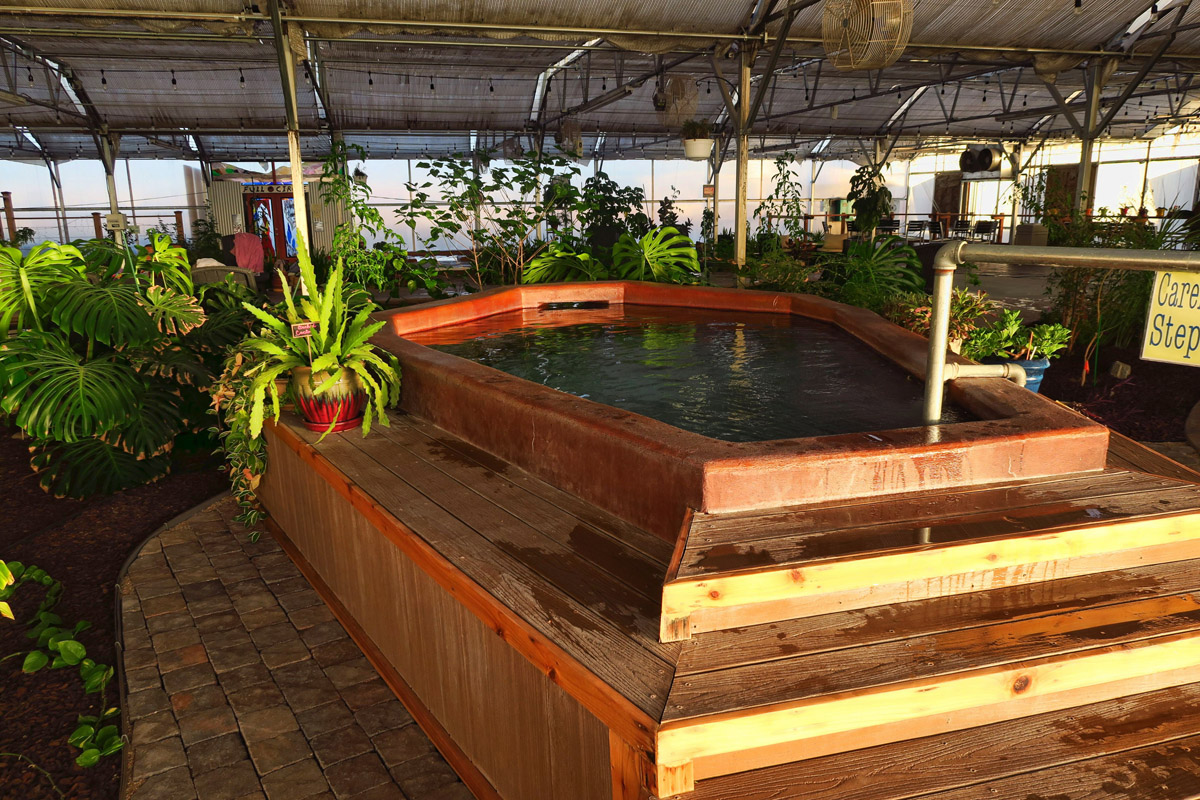 The hottest of the pools is called “The Coffin” at 109 degrees…and yes, it’s shaped like a coffin!

As for my visit to the National Park, well, as I’ve often been known to say, “I’m glad I went, buuuut……”

Granted, it’s a brutally cold, blustery day, but I have a hard time getting excited on my way to climb High Dune.  On my way across the dry Medano Creek bed , a woman returning stops me to ask, “Do you have any goggles?   If you are thinking of climbing, you are gonna need goggles.   It’s like being sand-blasted up there, and you may not be able to see your way down.”  I return back to the Winnie for the closest thing I have to goggles….my SCUBA mask….just in case.   I put on my puffy down jacket and wrap my head in a scarf like a Moroccan Berber, and begin my climb. 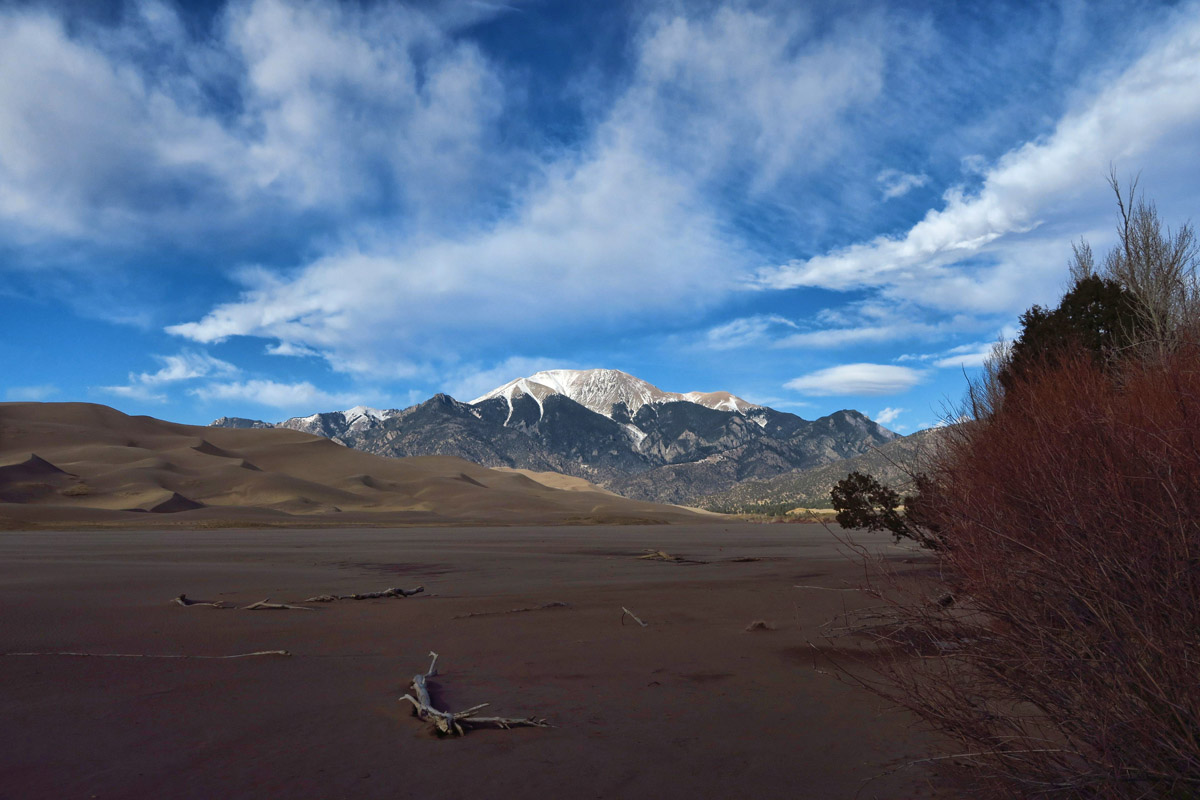 To access the dunes, one must cross the now dry Medano Creek, which only has water in early spring. 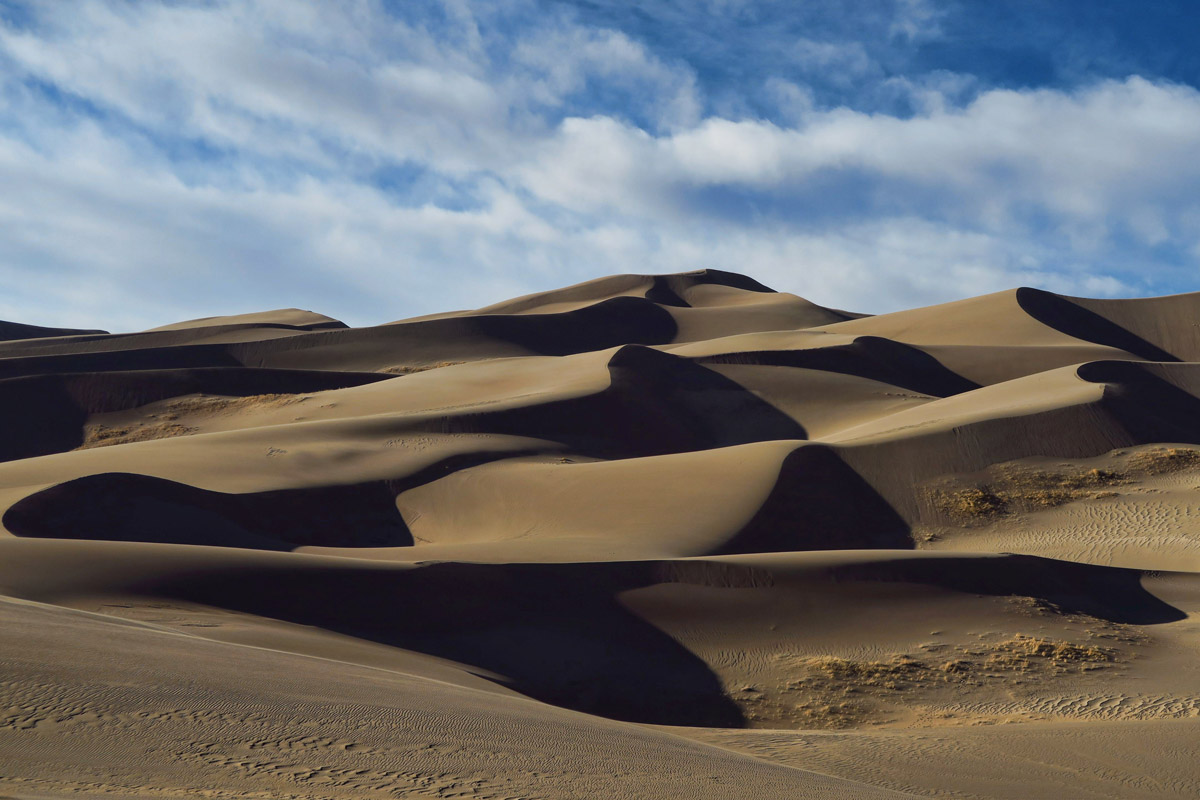 High Dune is over 750 ft high, the tallest sand dunes in North America. 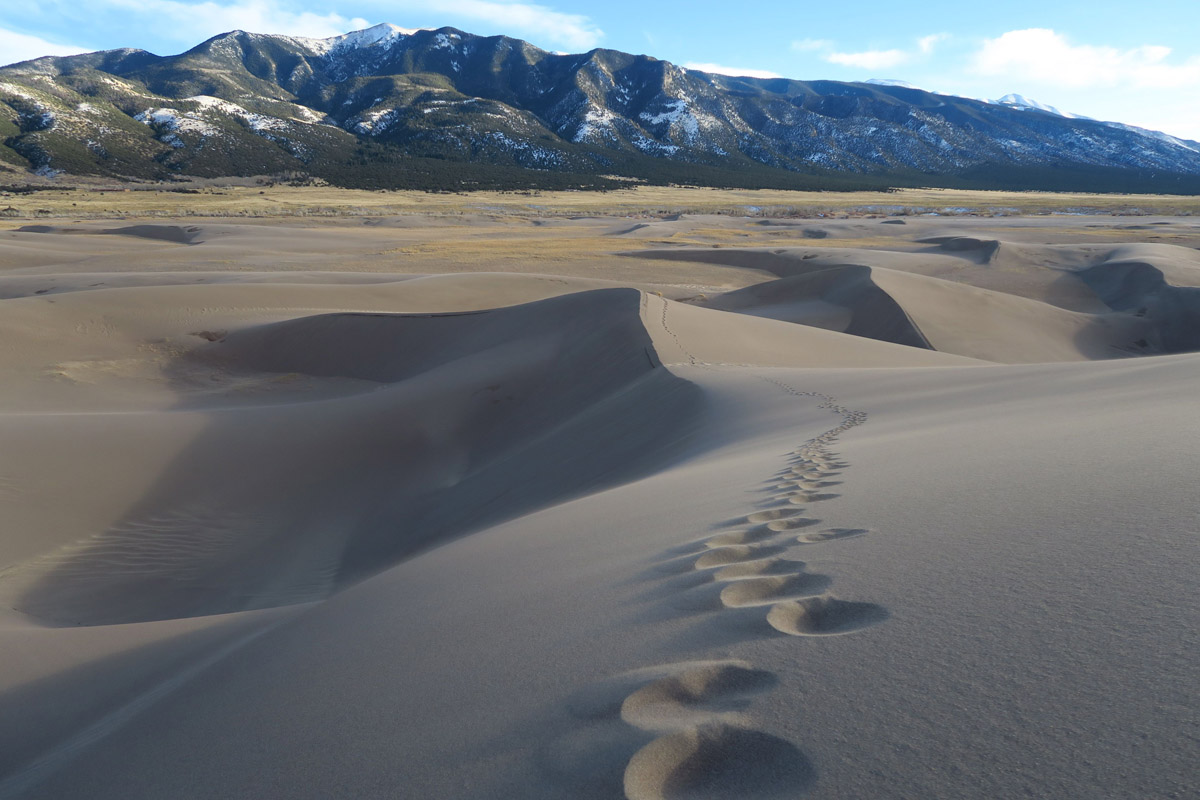 Notoriously high winds in this area contribute to the height of the dunes.

It’s a struggle against the wind.  I often feel like I’m taking one step forward and two back.  Plus, the blowing wind is erasing my footsteps faster than I can outrun them.  The drive into the park and stop at the Visitor Center has cut my already short day shorter, and the sun is rapidly dropping low into the sky.  I start to feel uneasy about the inability to retrace my steps back, and the nagging warning from the ranger about the wandering elk across the highway.   But most importantly, I’m not having any fun.  So I turn about halfway up the High Dune, happy to leave without the “been there, done that.” 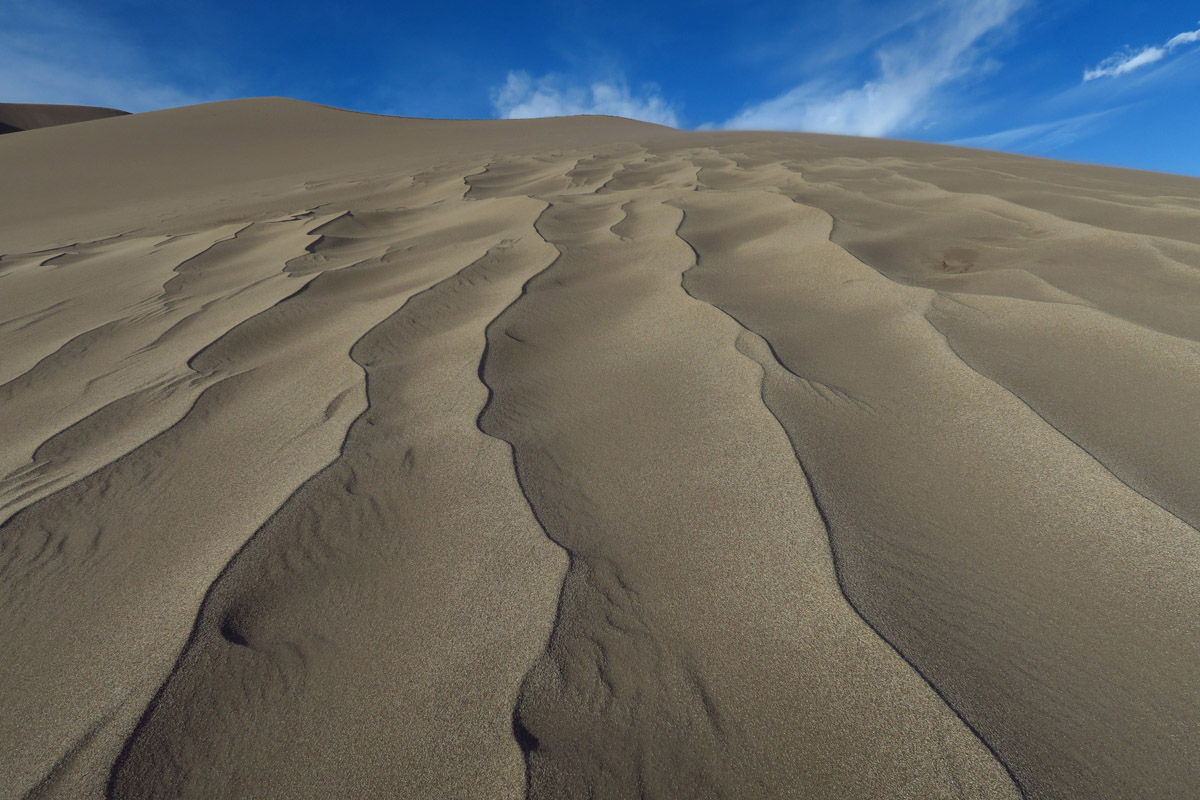 The park has been designated as the quietest of all national parks. 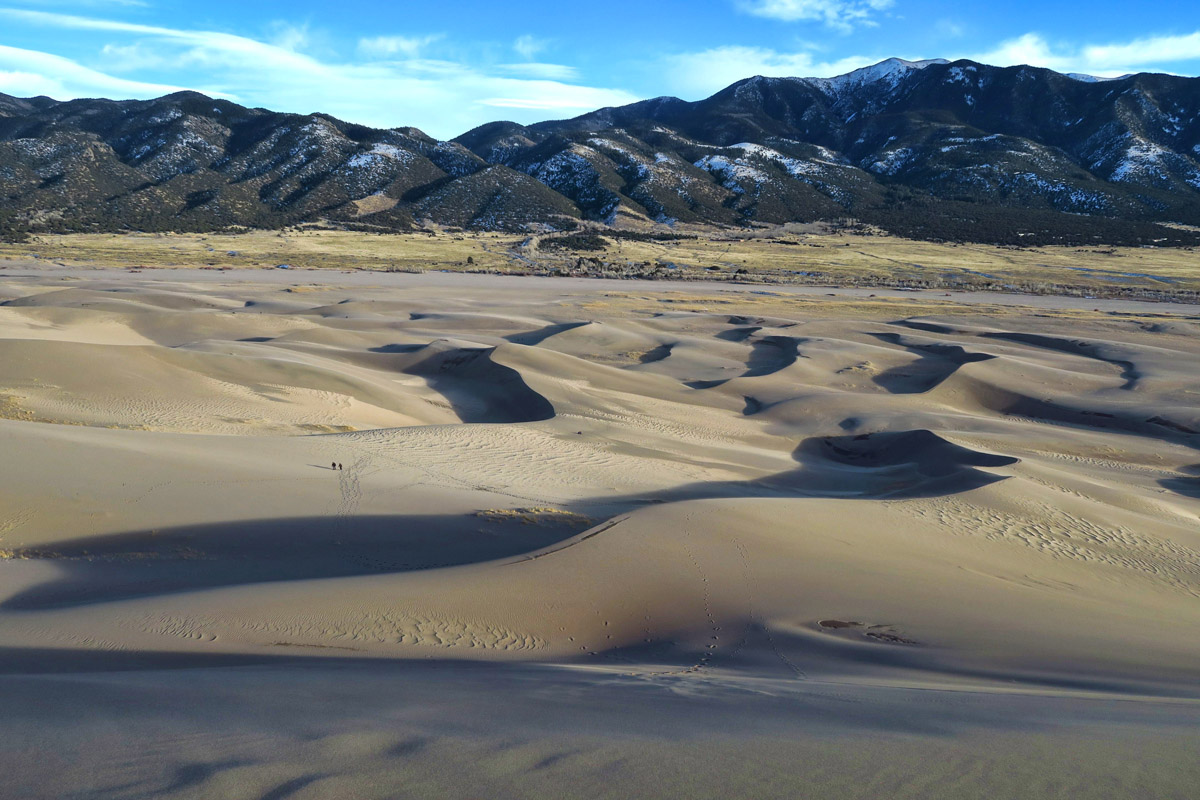 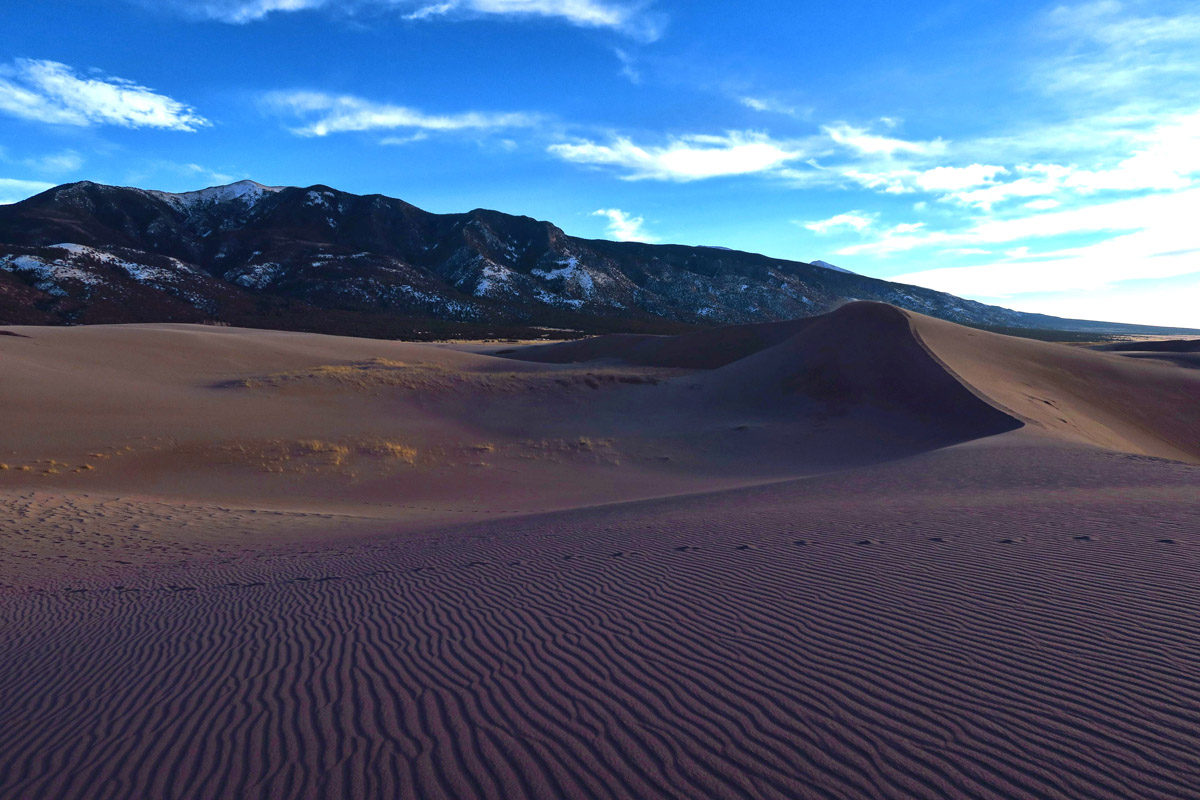 The park actually encompasses several 13,000 foot peaks, and borders on a couple of 14’ers.

I am sorry to report of the National Parks with official “Park” status that I have visited thus far, this was one of my least favorites, second from the bottom to Pinnacles National Park.   I would blame it on the time of year, were it not for the fact that the beautiful snow on the distant Sangre de Cristos mountains was the highlight.   I think what left me cold (pun intended) was the dismal brown color of the sand. 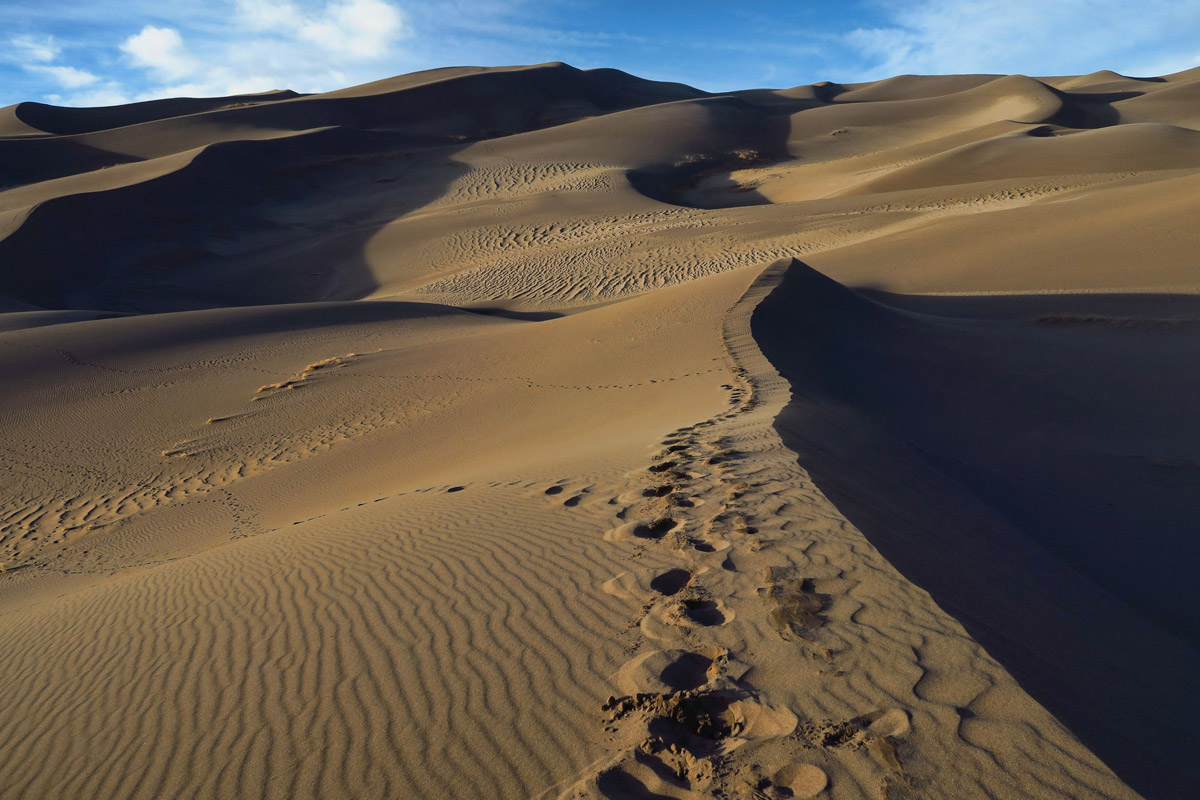 A sea of cocoa? 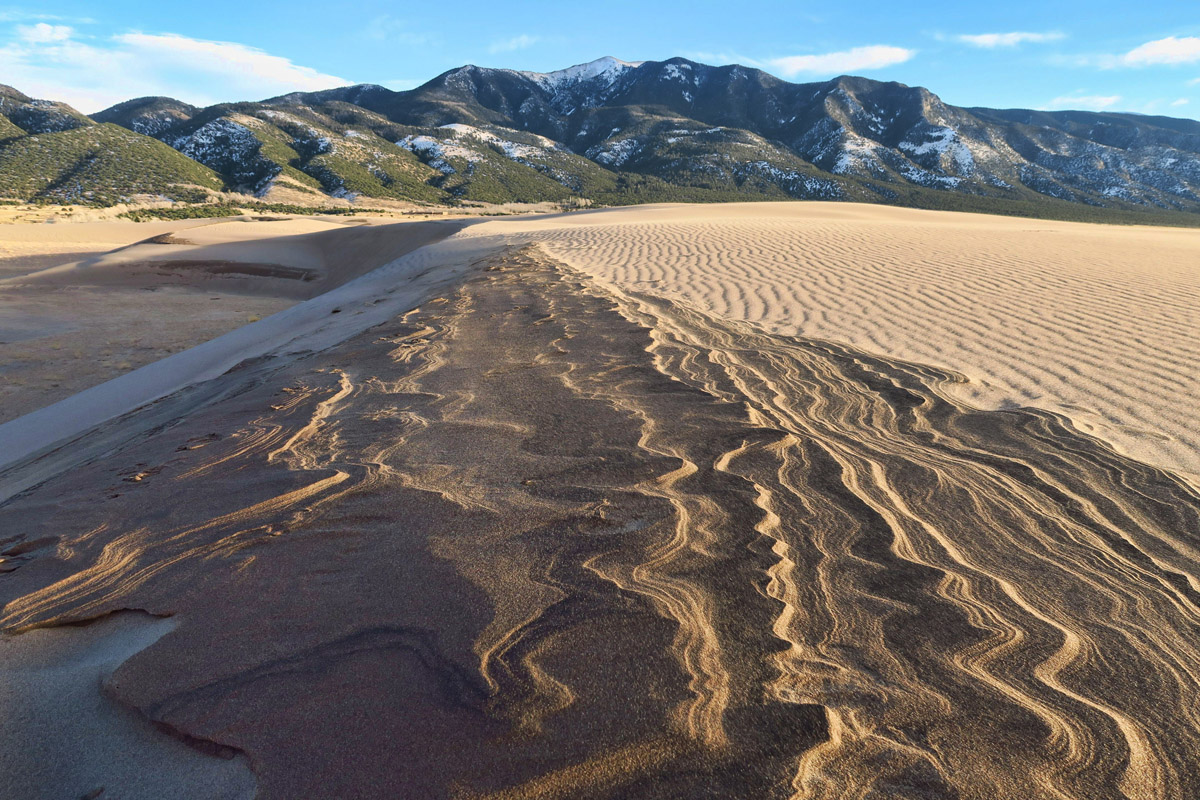 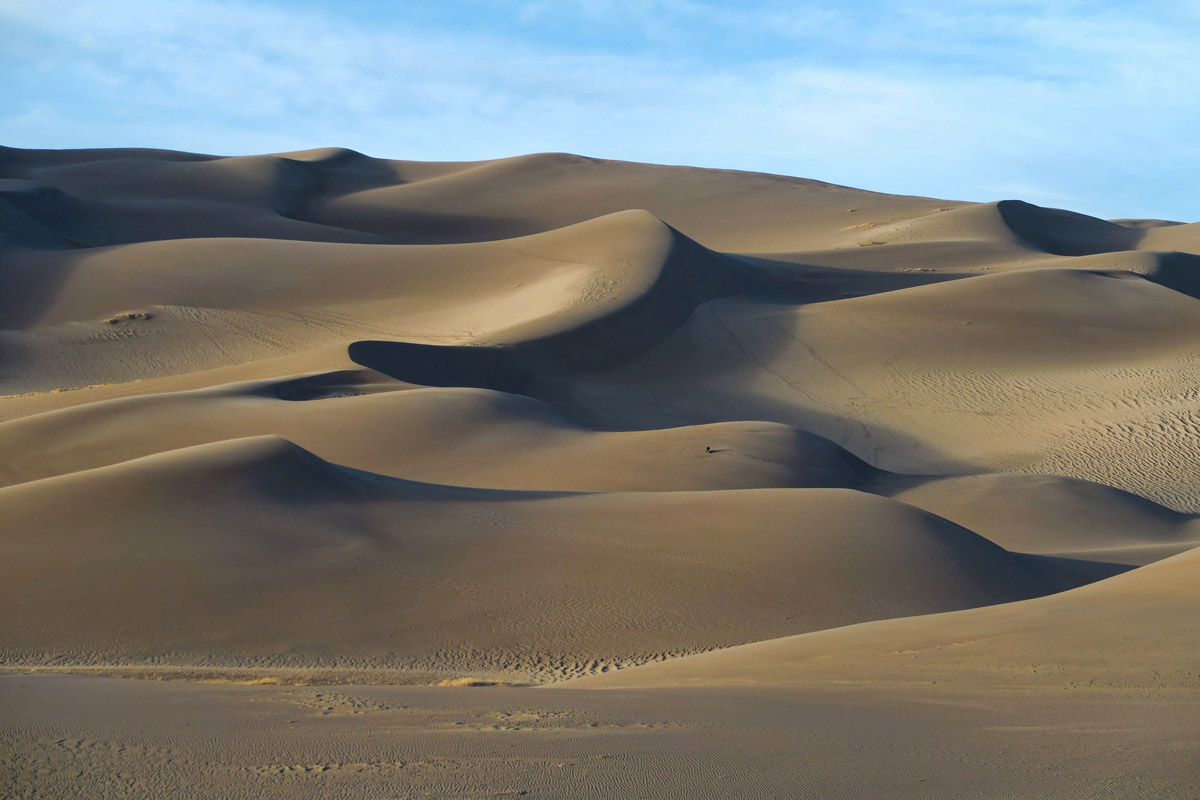 I suppose I could try to think of it is “Taupe velvet.” 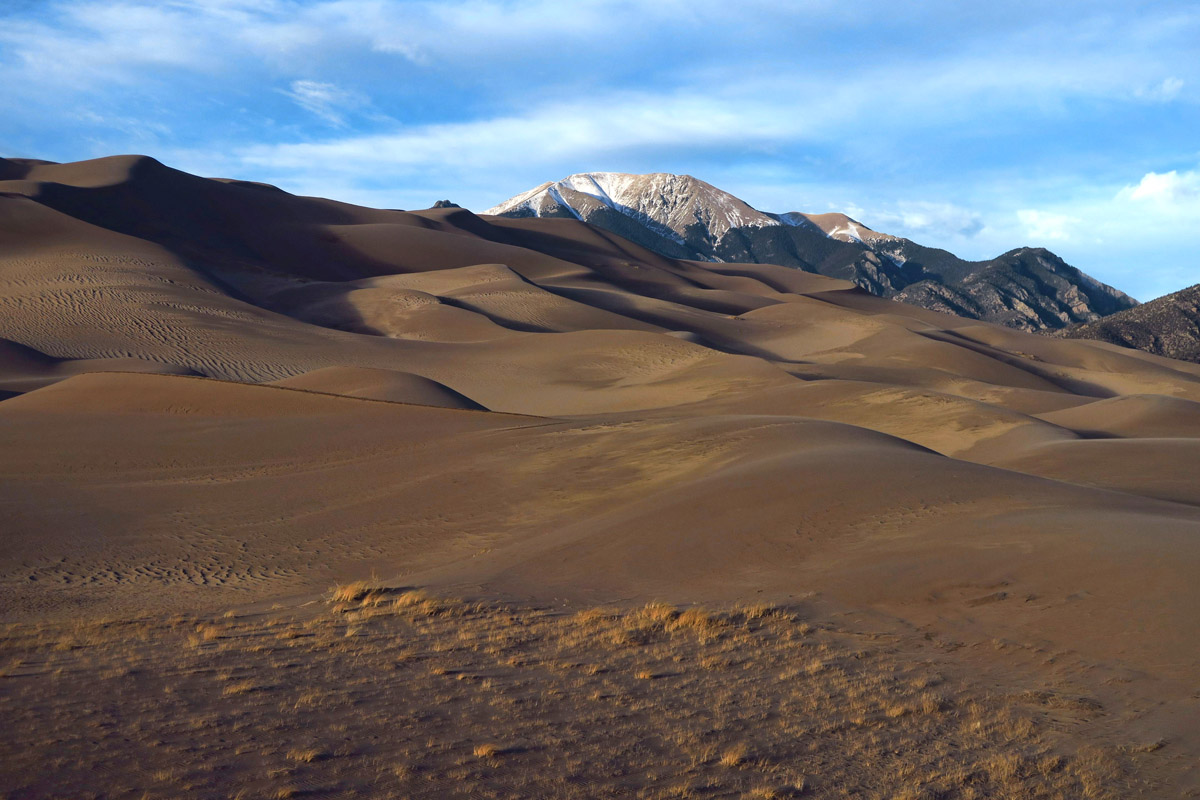 After falling in love with the warm glow of the Coral Pink Sands of Utah, basking in the pristine beauty of the White Sands of New Mexico, traipsing across the golden dunes of Death Valley at sunrise, and frolicking with friends in the Mojave Dunes, I found myself asking “How did these dunes earn prestigious “Park” status while the others (Death Valley being the exception) have not?”

Great Sand Dunes is a relatatively new national park, being promoted from “Monument” to “Park” status in 2000 by President Bill Clinton during the purchase of nearby Baca Ranch, which doubled its size and encompassed the 14ers. 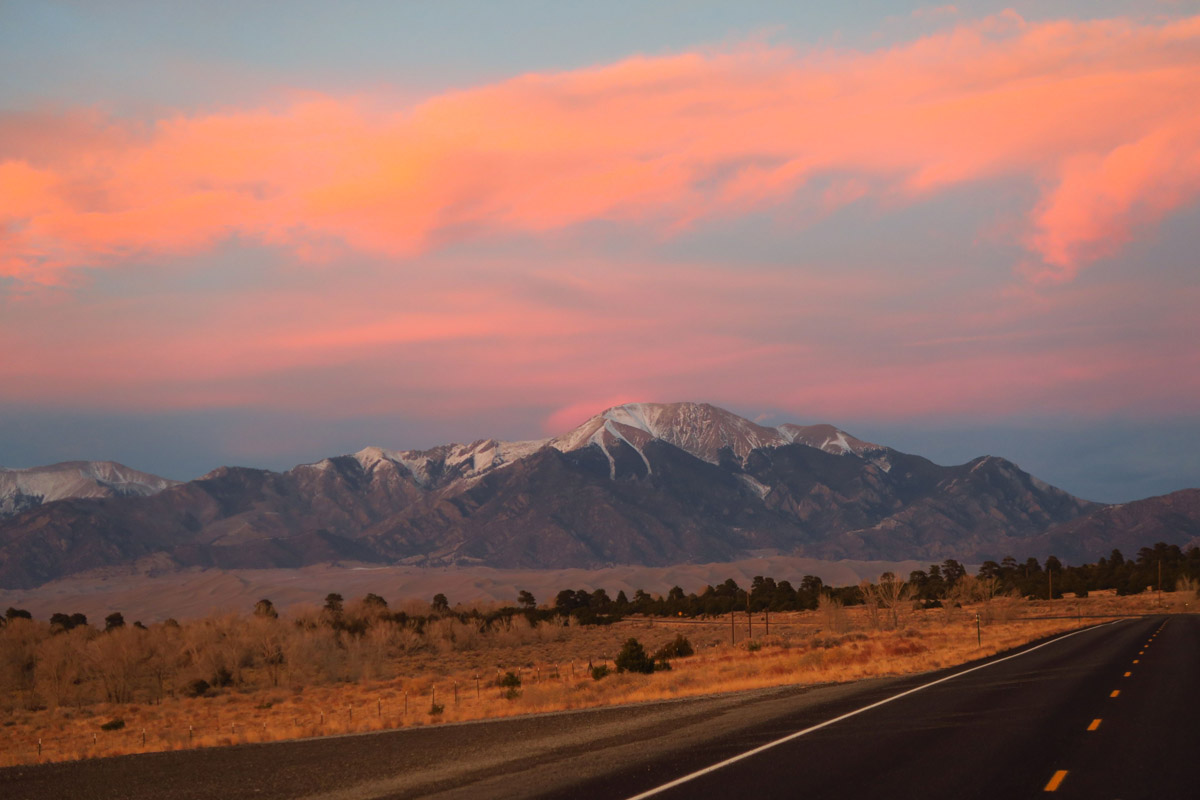 My overnight spot on the turnout, just outside the park boundary…