I’ll admit I’d never even heard of Chaco Culture National Historic Park until I visited Mesa Verde National Park in 2015 when a Ranger on one of the guided tours said “If you think this is something, you should visit Chaco Canyon!”    So to learn that it was once considered the center of all ancestral Puebloan culture came as quite a surprise.   How could this ancient hub of civilization, just one state over from my childhood home, be a complete unknown to me?  After all the road trips of my youth across the great southwest, from my entree to Disneyland at age four, to visiting Bandelier, to my many ski adventure years in Red River, New Mexico and the nearby Balloon Fiesta, how could I have missed what is reported to be, “one of the most important pre-Columbian cultural and historical areas in the United States?” 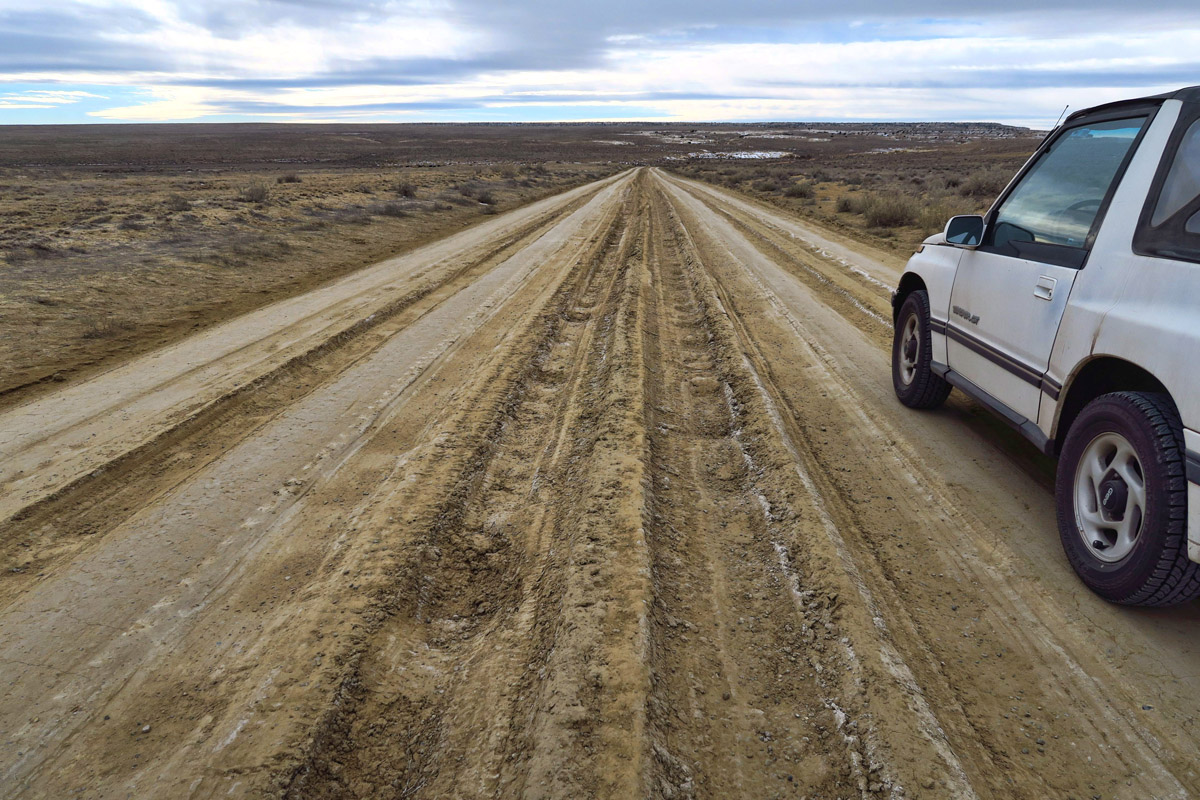 One of the only two roads leading to Chaco Culture National Historic Park….and this is “the good road.” 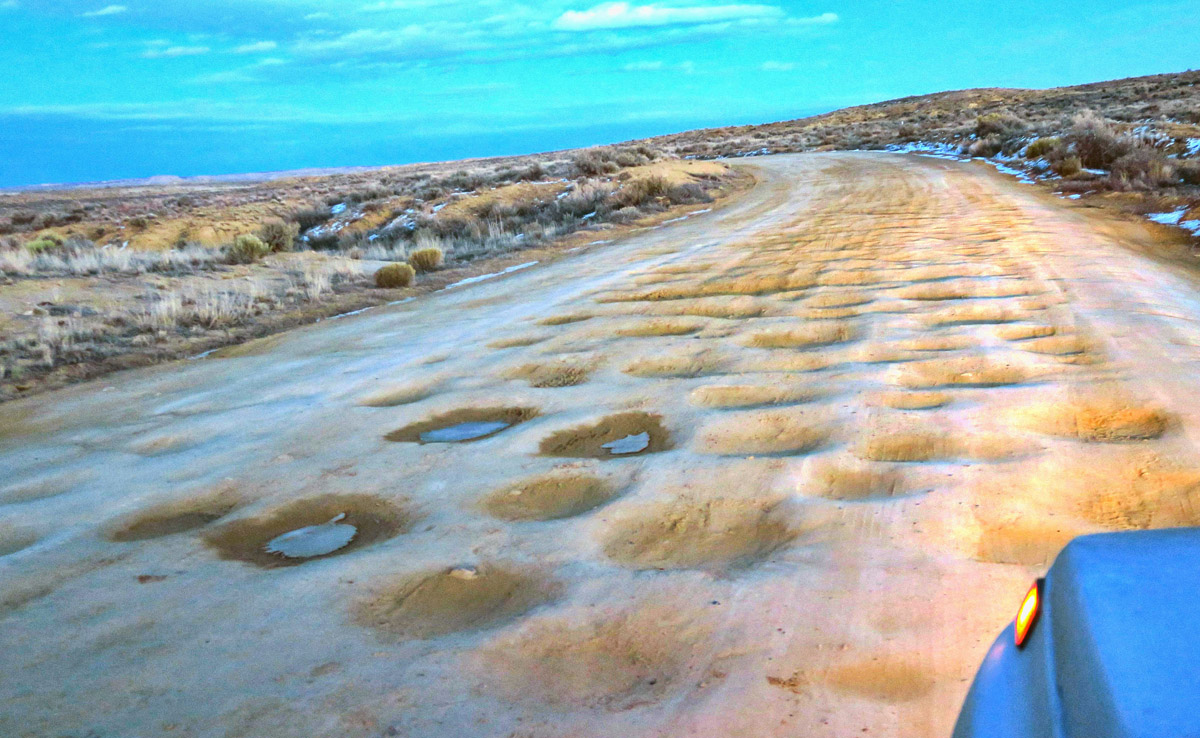 Even the short wheel base Tracker can’t navigate this obstacle course! 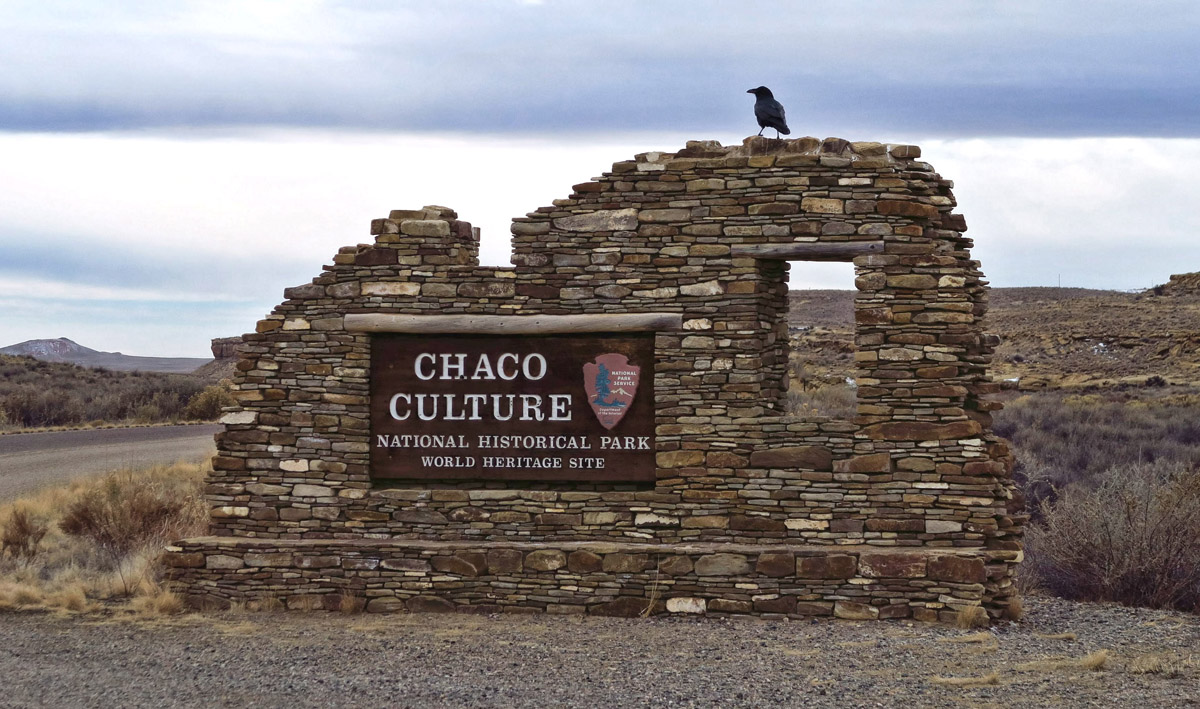 This raven, or his family members, seemed to follow me around all day.

Since the Winnie was already winterized in prep for my stay in single-digit temps on the south rim, I picked out a few “wintery” spots to visit along my route home for the holidays.   Having heard about Chaco Canyon while in Mesa Verde, followed shortly thereafter by Mark and Bobbie’s blog post that same year, I set my intentions to visit in spite of snow on the ground.  (Take a look at Mark’s photos, as he had the benefit of blue sky and sunshine, rather than my flat light, gray day.) At over 6,000 ft elevation, an overnight in the nearby Farmington Walmart had been pretty brutal.  To see the ancient site would mean another night of the same, as I wasn’t paying for full hookups with all my tanks empty…besides, my propane heater does a much better job than electric. Still, could my batteries hold out for two cloudy nights in a row of the furnace running all night? 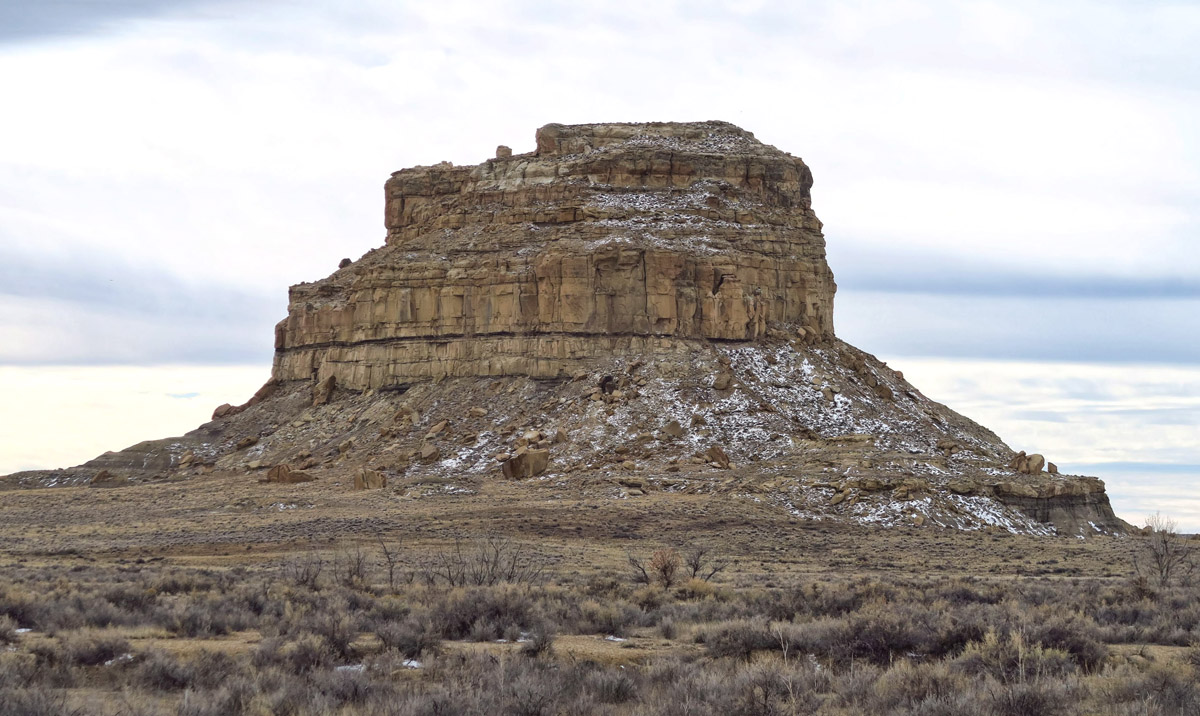 Fajada Butte has an ancient manmade ramp to the top, now closed due to erosion. 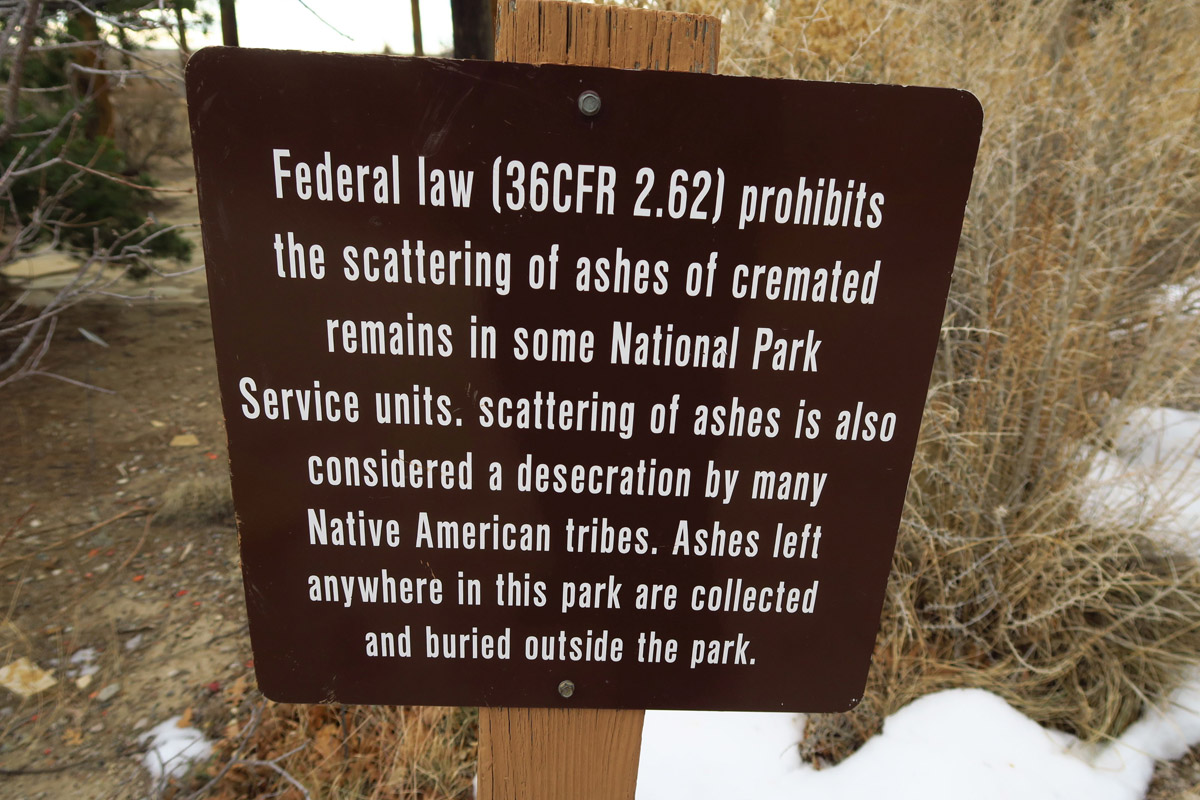 Don’t get any ideas to join your ancestors… 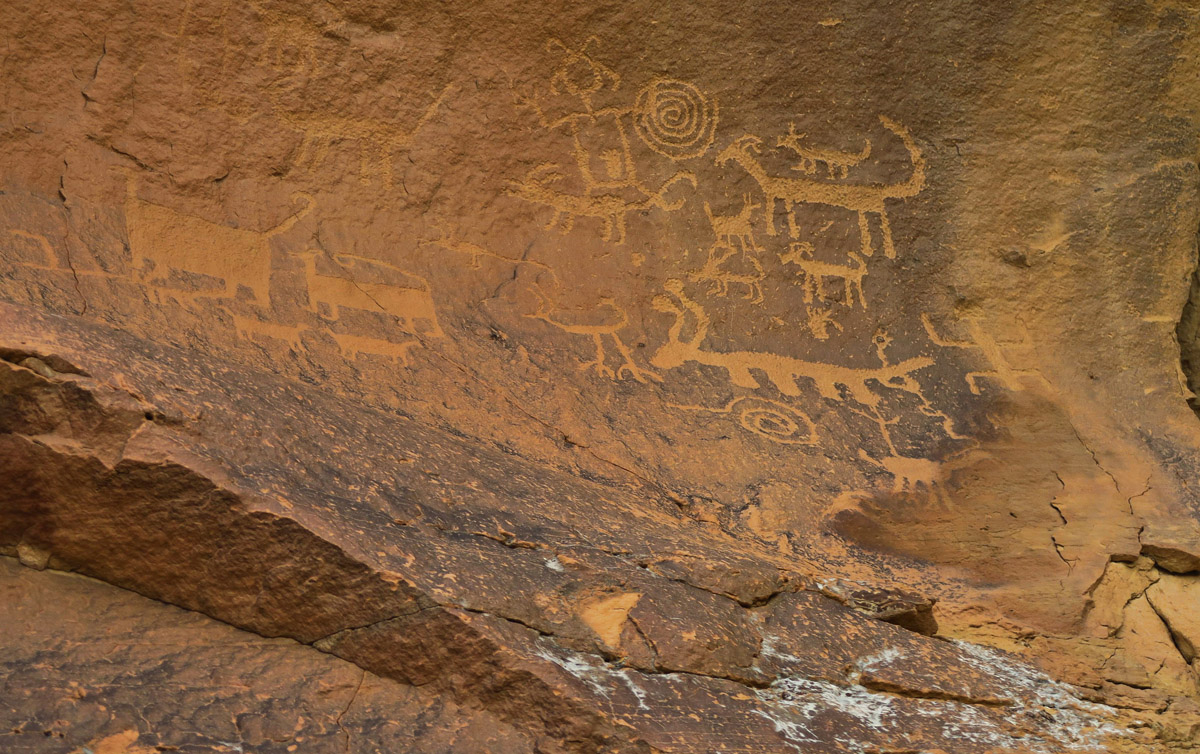 One of the many petroglyph panels, this one near Una Vida site.

Everything I read about the site, from the NPS website to Trip Advisor write-ups warned about “that ROAD!  That horrible, indescribable road!”    It’s 21 miles to the site from the highway.  The first five are paved, while the remaining 13 are dirt….but it’s the last five miles that will make you contemplate bruised kidneys, shattered teeth, and a broken tailbone.  Washboards that rattle the fillings in your teeth, pot holes impossible to dodge.  I feel sorry for anyone who might ride in on the passenger side, as one needs the steering wheel in both hands just to hold on! For the final stretch, I literally drove through the soft sand of the ditch at a 45 degree angle to avoid the obstacle course. 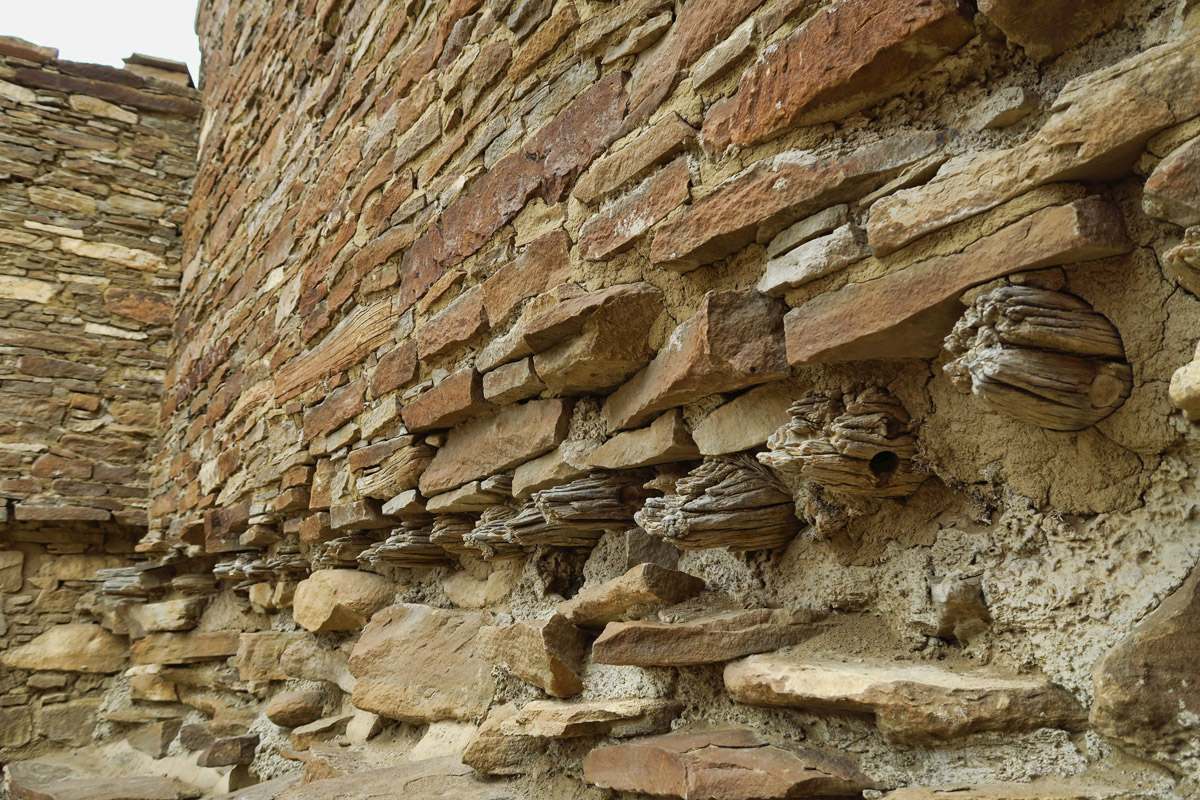 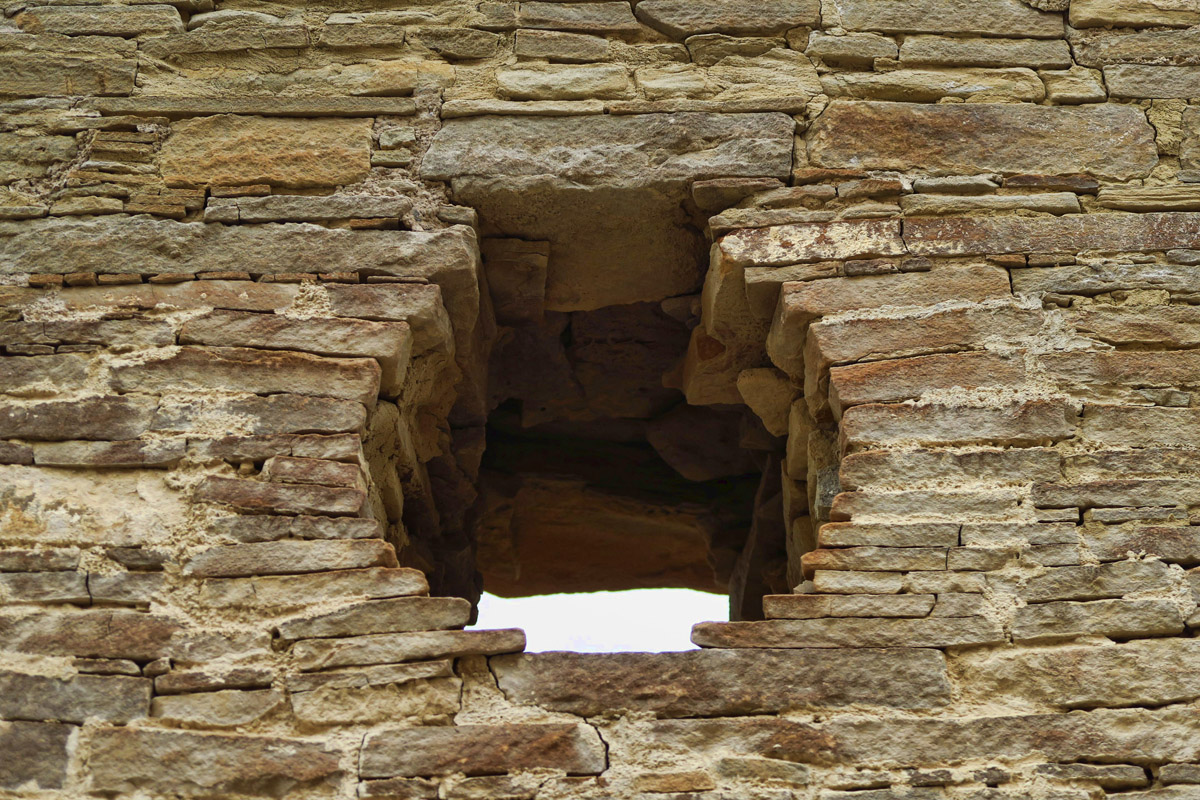 Structure remains in place even after the timbers have rotted.

Although there is a campground onsite at the park, there is no way I was going to take the Winnie down that road!   I felt guilty enough taking the Tracker!   But to leave the Winnie behind in Farmington would mean driving the Tracker over 150 miles round trip…beyond his comfort zone for one day.   So I called the park to ask if there was a place to leave the Winnie while I did the stretch of rough road.  The park advised that Red Mesa Express, a small gas station near Nageezi at mile marker 112.5 along Highway 550, had been known to allow parking, advice which proved to be very useful. 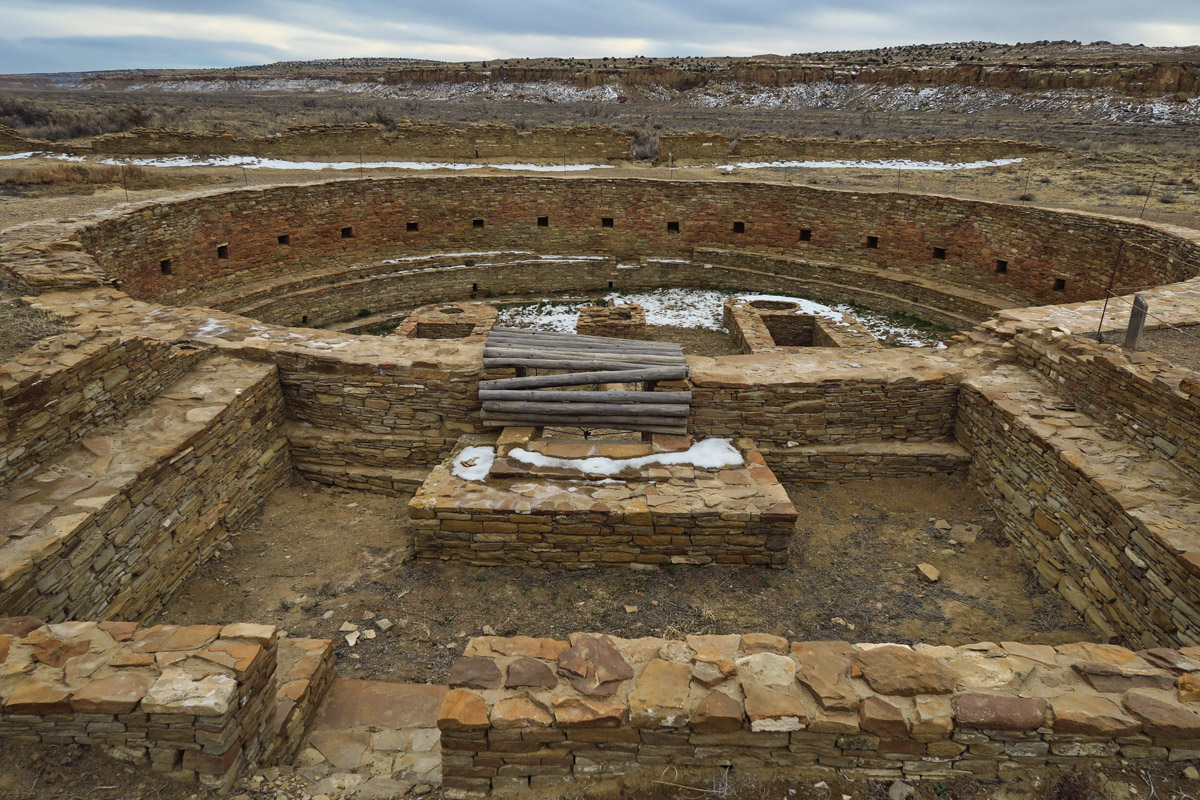 Ceremonial Kiva, would have been covered with wooden beams. 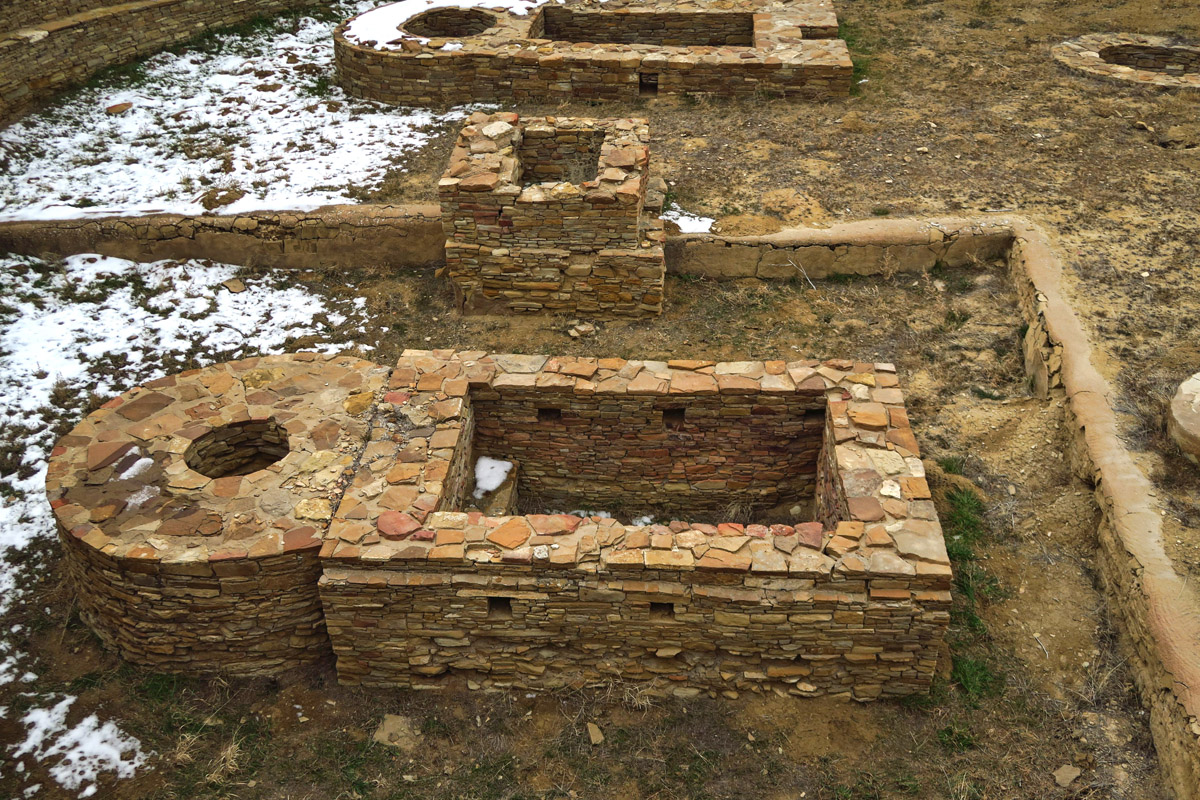 There is no evidence as to what these structures inside the Kiva were used for…one theory is that covered with animal skin, it could have served as a “foot drum.” 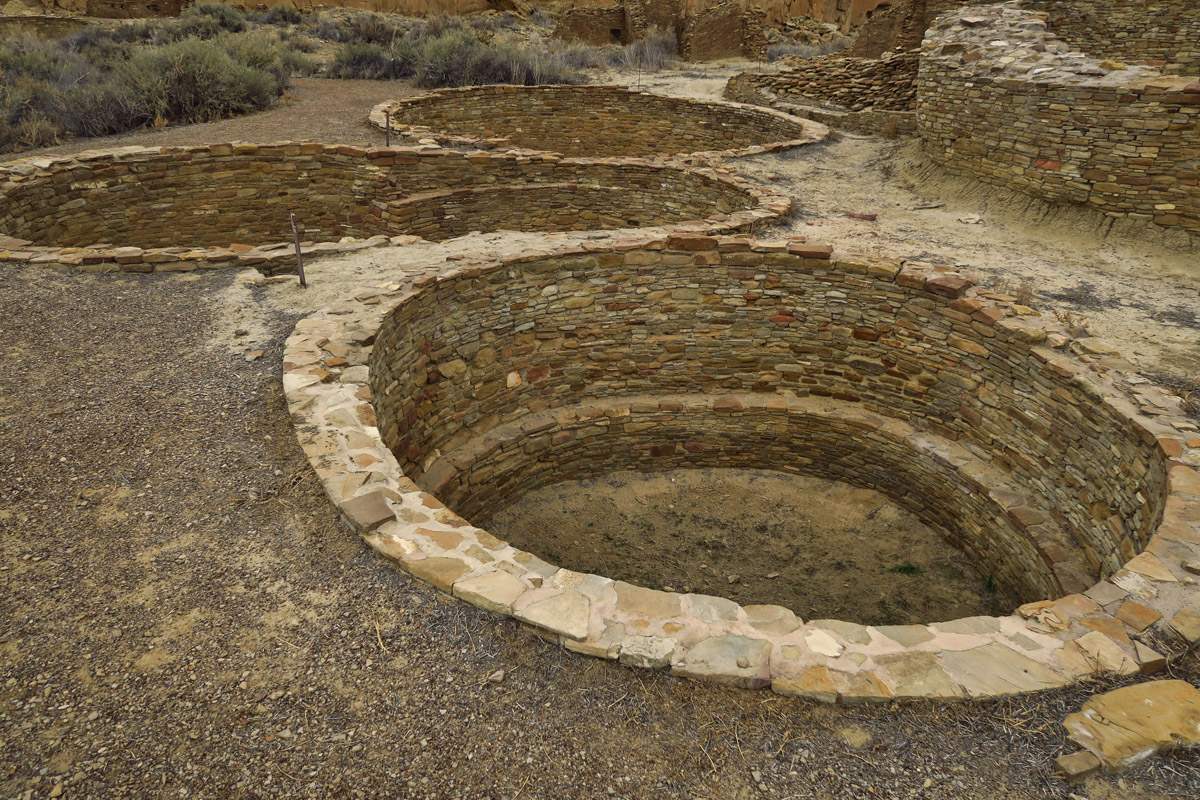 During the half hour I spent wandering through the Visitor Center, a dozen or so visitors came in.  Every single one of them made a comment about “the road.”  One guy even went so far as to say “The National Park Service should be ashamed of themselves!”   But it’s not the NPS.  They don’t own the road.  And clearly, as evidenced by the tempered answers from the Ranger, there are a lot of politics involved.   The standard answer is that the roads leading in belong to multiple owners; county, tribal, and private owners, none who can come to agreement on plans, funding, or even desire to improve the road. It does, after all, put a limit on visitation to a site still considered by many to be sacred. 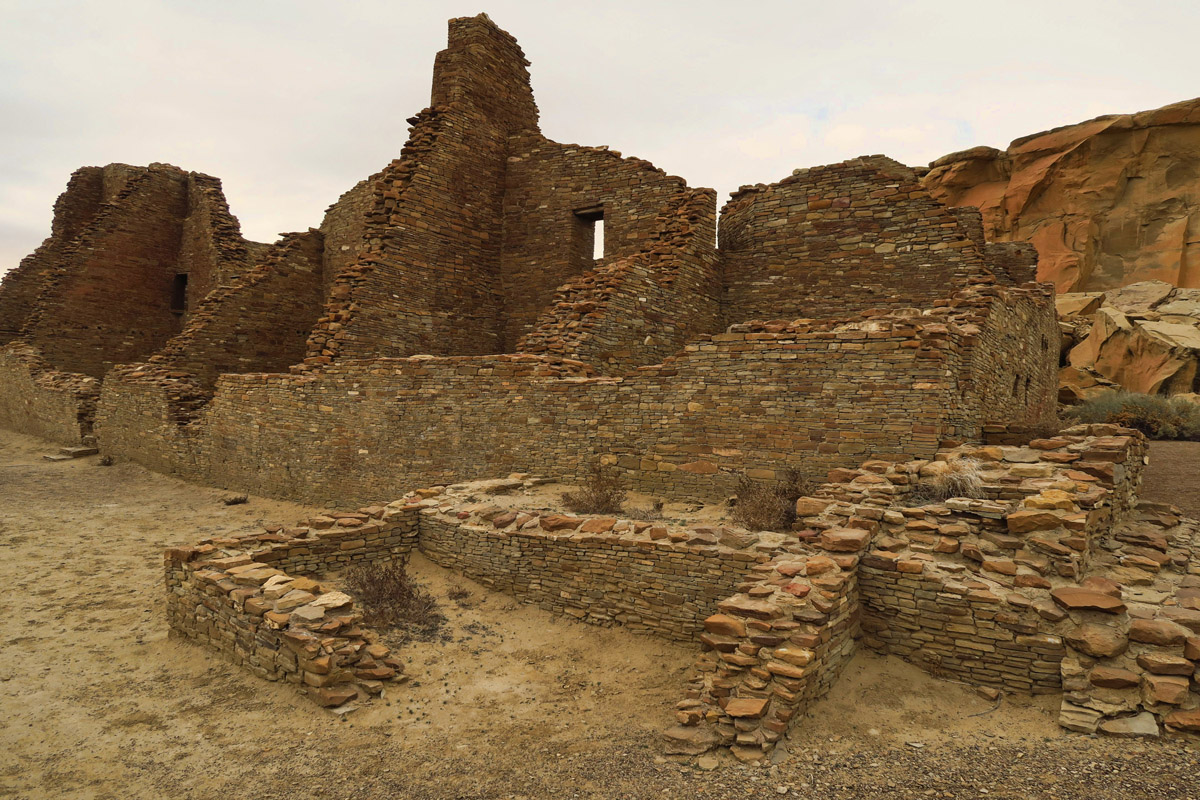 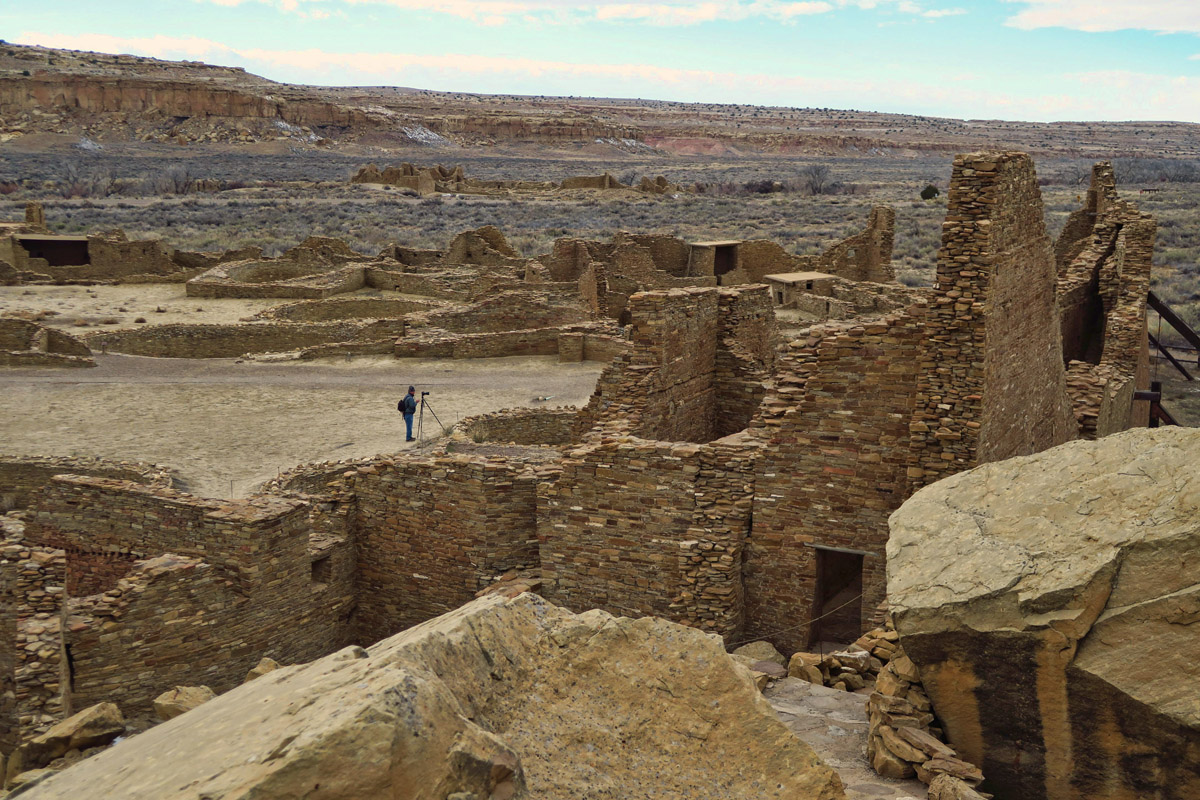 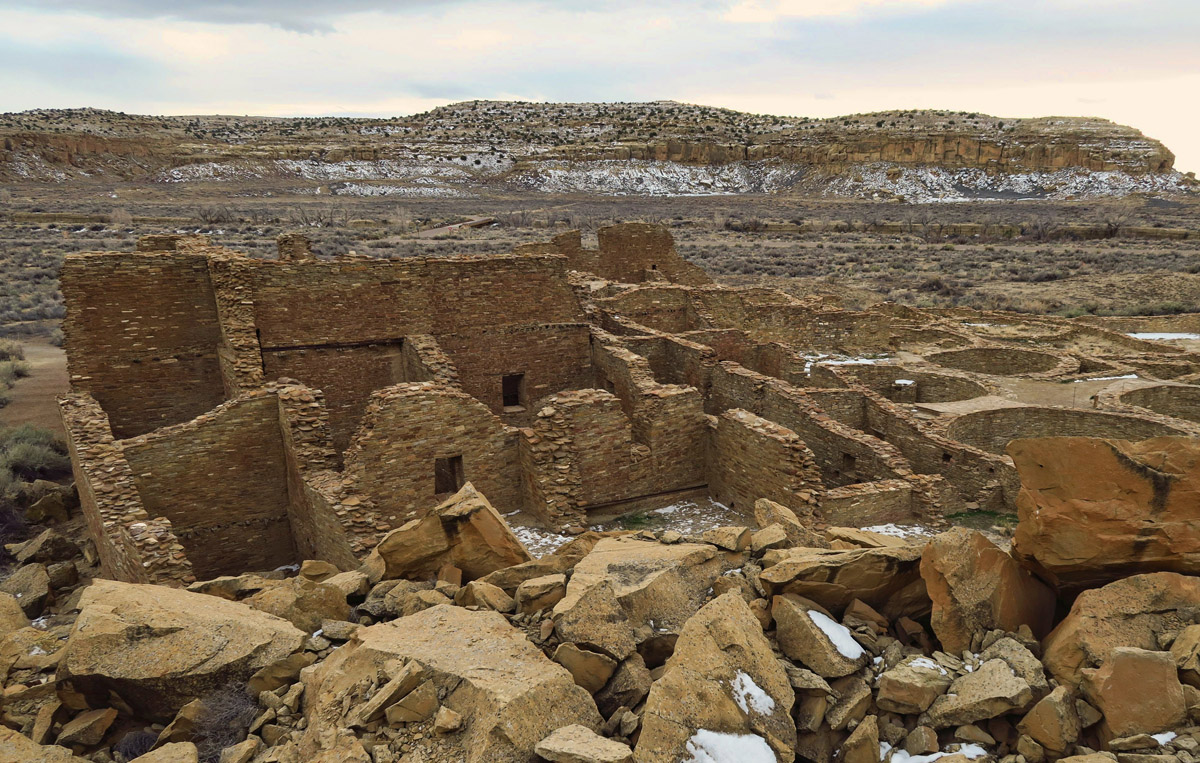 Overlooking Puebla Bonita on the Ranger tour…there is a higher vantage point if you are willing to climb.

This abysmal road is only one of two remaining passable egress points from what has been identified as over 400 miles of carefully engineered roads leading to Chaco, some with even two and four lane segments. This cultural hub of the ancestral Puebloan people was believed to be the heart of a regional network which functioned as ceremonial, social, political, and trading center for more than 300 years. Hundreds of thousands of artifacts have been excavated, including seashells, copper bells, macaw feathers and bones, and over 200,000 pieces of turquoise.  Over 100 cylindrical jars containing traces of cacao, or chocolate, were excavated and now are stored in the American Museum of Natural History in New York, indicating trading as far away as Central Mexico. 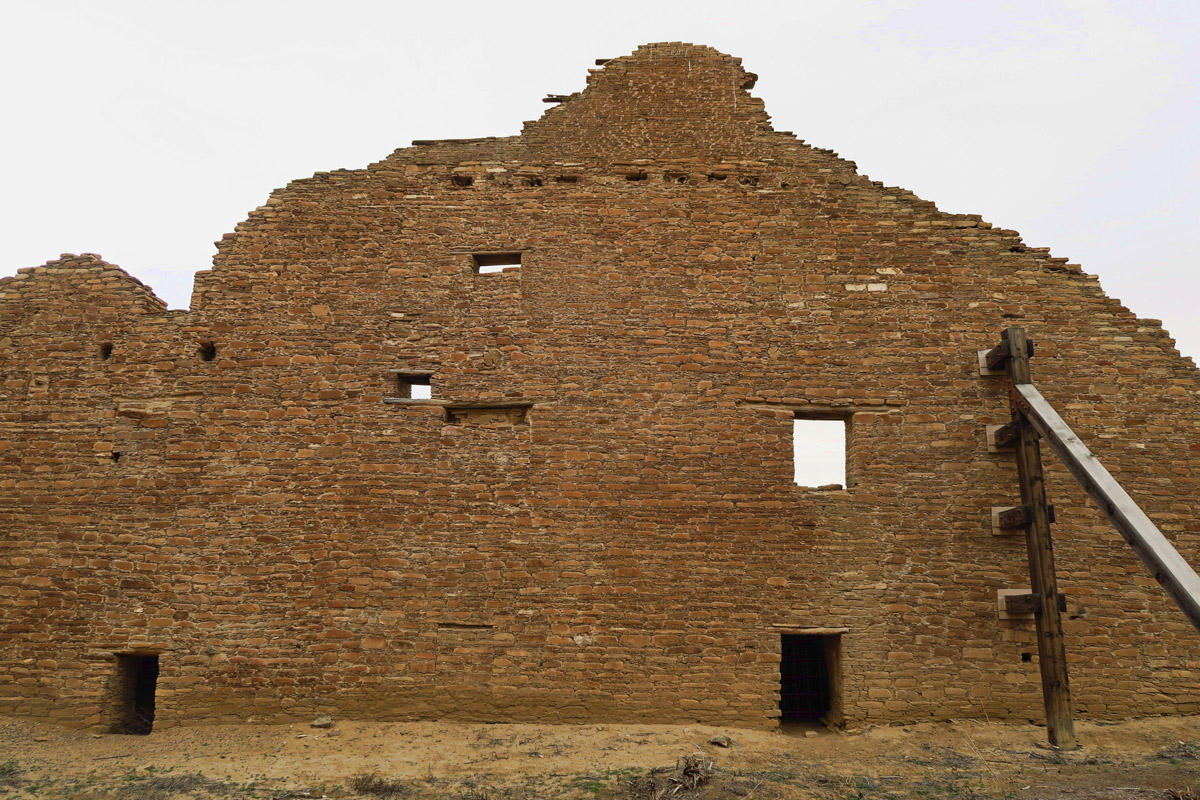 Evidence that structures were up to four stories high. 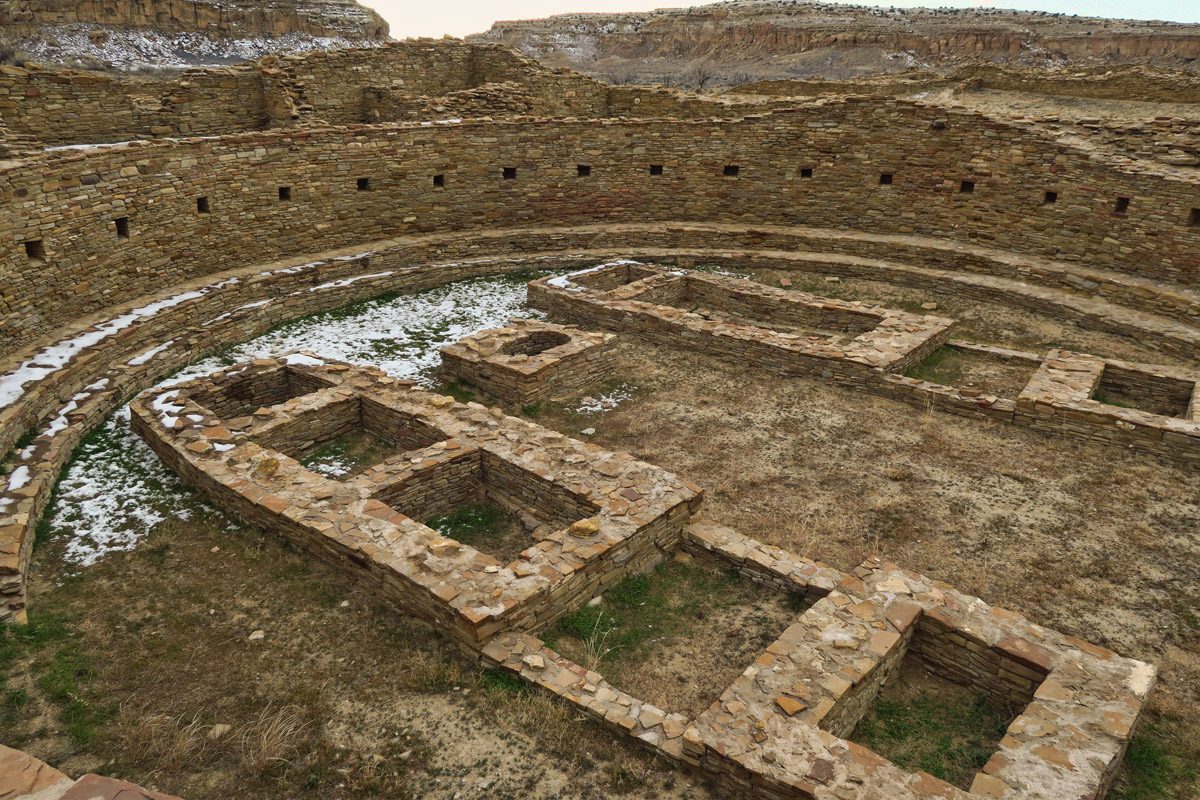 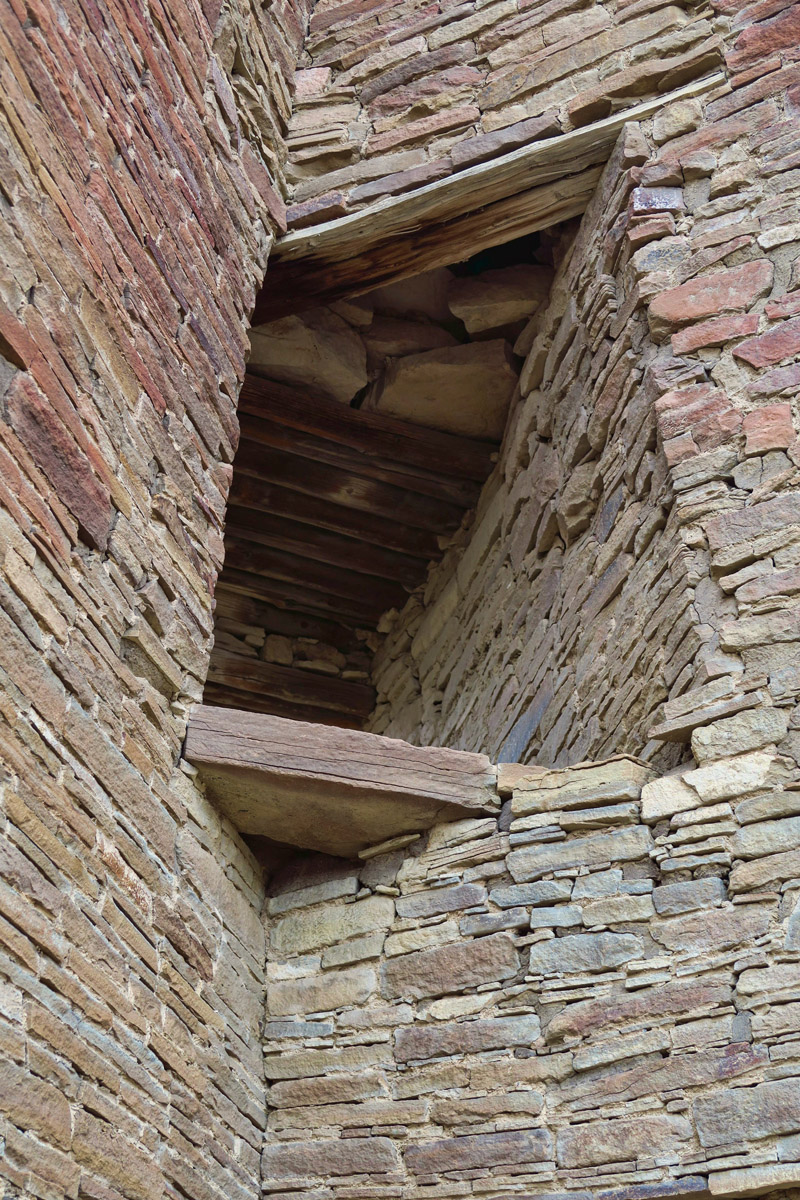 One of the fascinating, sophisticated “corner windows” believed to have been built to observe the solar and lunar cycles.

Although preservation initiatives have identified more than 2,400 archeological sites within the current park’s boundaries built between 850AD and 1150AD, only a small percentage of these have been excavated.   The nine mile park road along the bottom of Chaco Canyon provides access to the excavated sites.  In spite of my early start, due to the short winter hours of daylight, I only made it to half a dozen before the park closed at sunset. 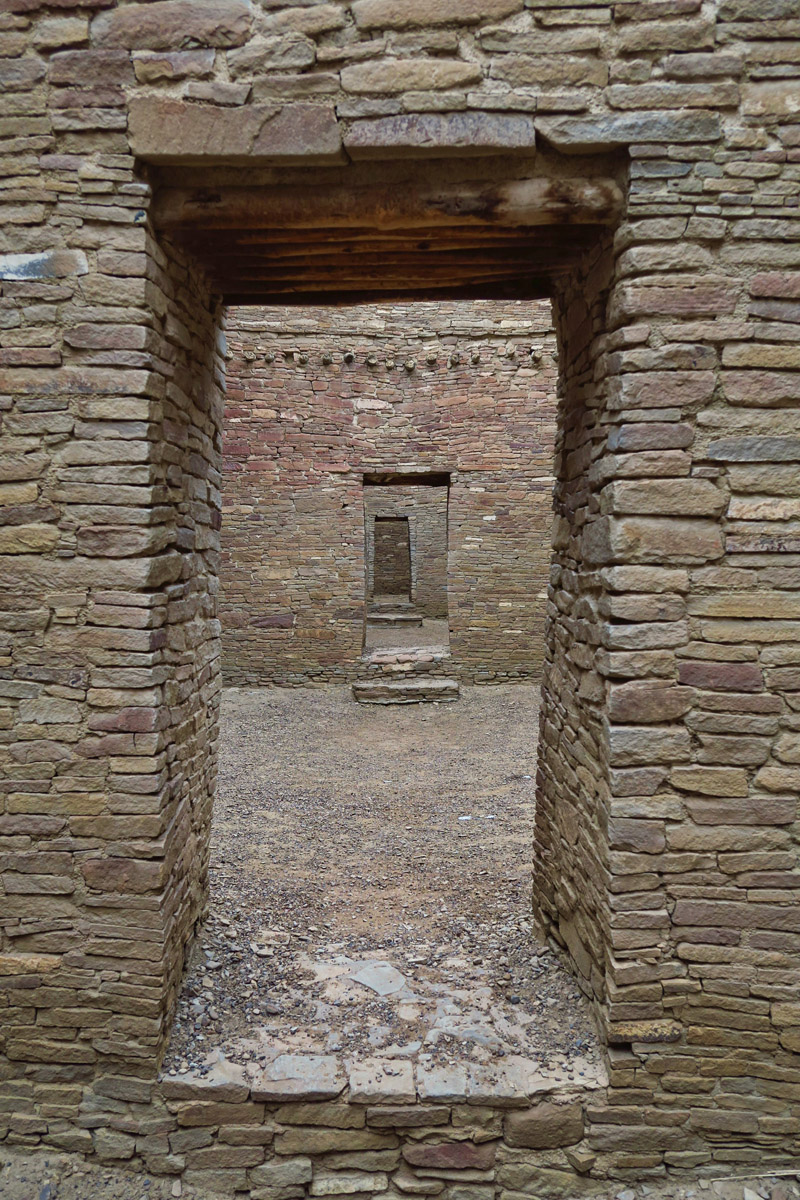 Puebla Bonita is a maze of rooms. 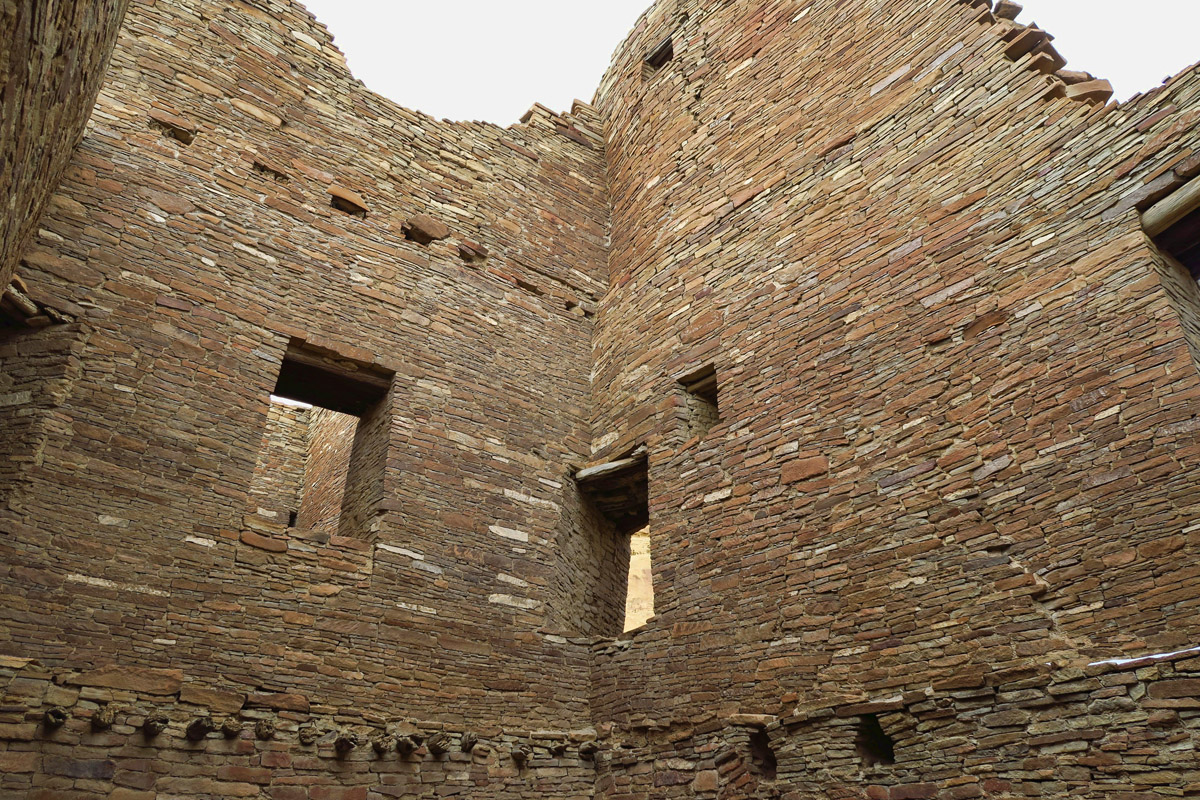 Another corner window, and exposed beams that separated the floors. 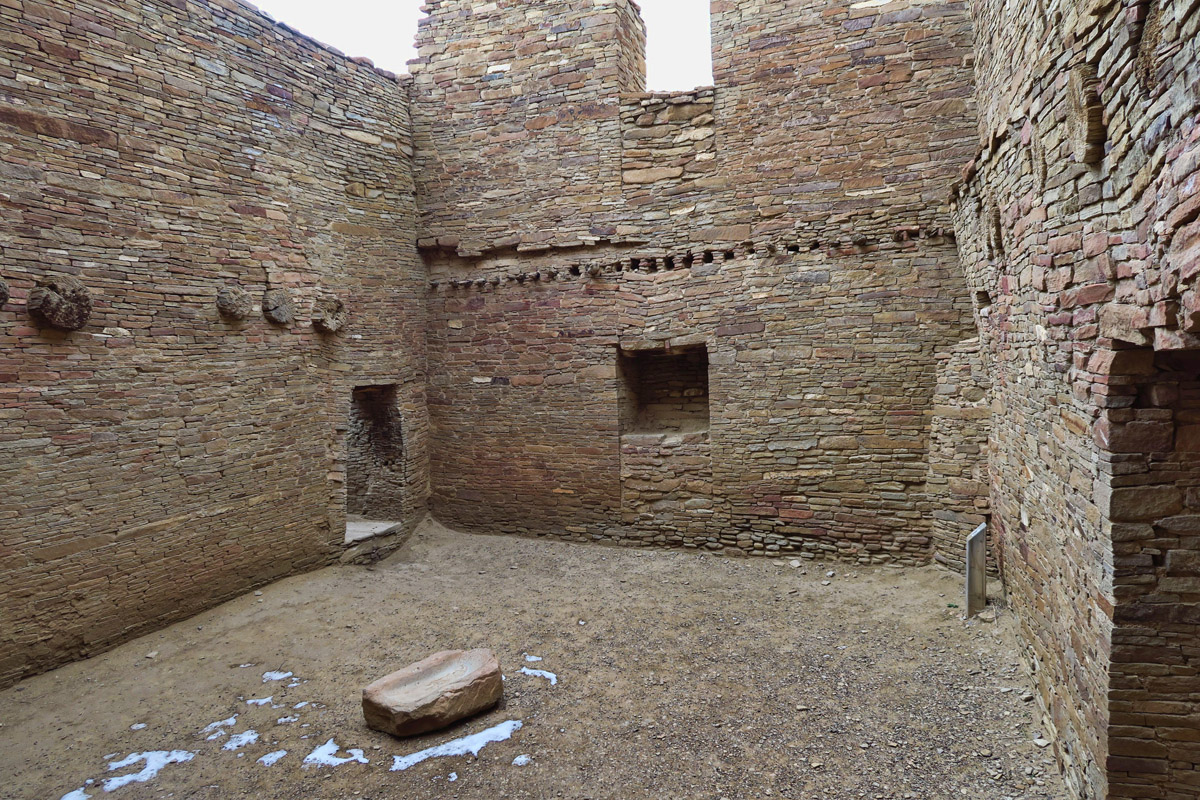 In the center, a “metate” or grinding stone used to process grains and seeds. 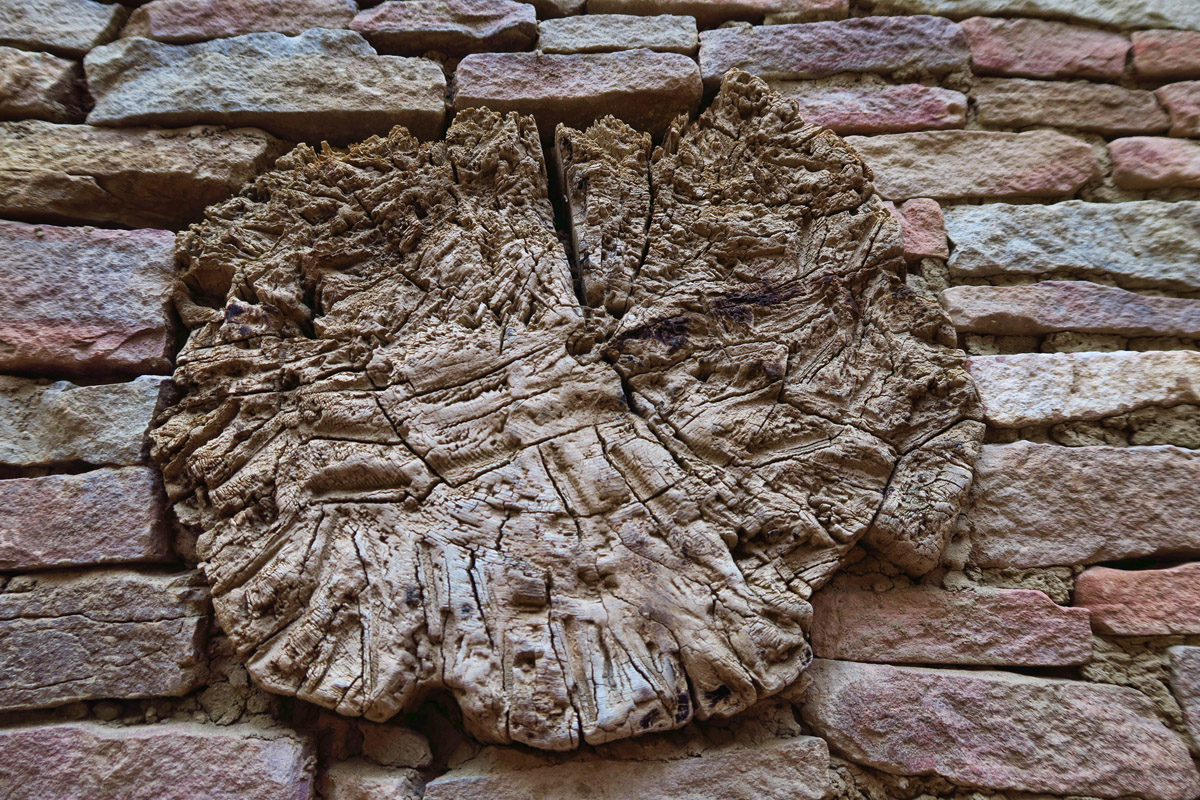 By far, the most impressive of the sites is Puebla Bonita, a four-story complex once containing over 600 rooms and 40 kivas (round, underground ceremonial structures.)  I highly recommend the Ranger tour of this site, as it is filled with bits of information that one might otherwise miss….like the fact that the beams required for the Chacoan structures, many still in place today, required the wood of 200,000 coniferous trees, mostly hauled on foot from mountain ranges up to 70 miles away. Or the massive masonry walls up to three feet thick, uniquely known as “core and veneer,” with the  center of roughly shaped rock set in mud mortar, with outside layers of finer masonry veneer.  Or the most fascinating aspect of the Chacoan site in my opinion…cardinal alignment to solar and lunar cycles.   The best example of this astrological significance and sophistication is evident in the many “corner windows” positioned for observation of the sun during the winter solstice. 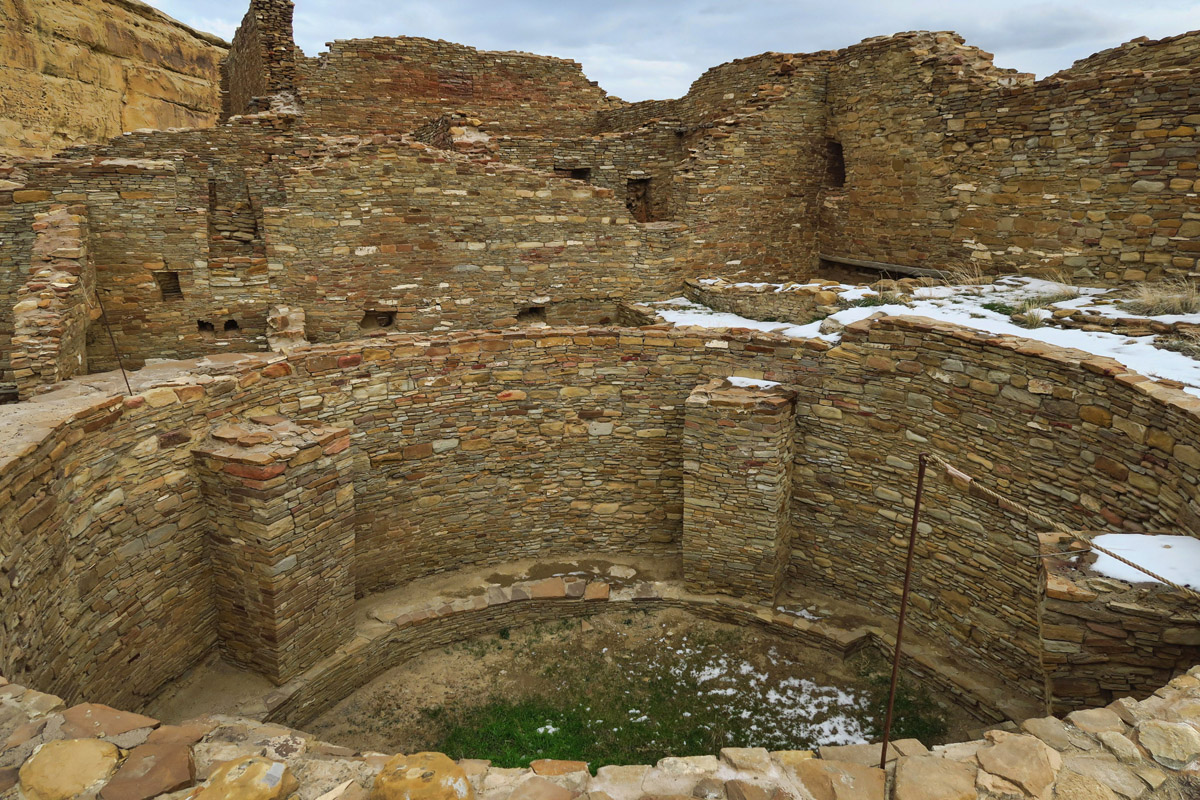 One of the larger ceremonial kivas. 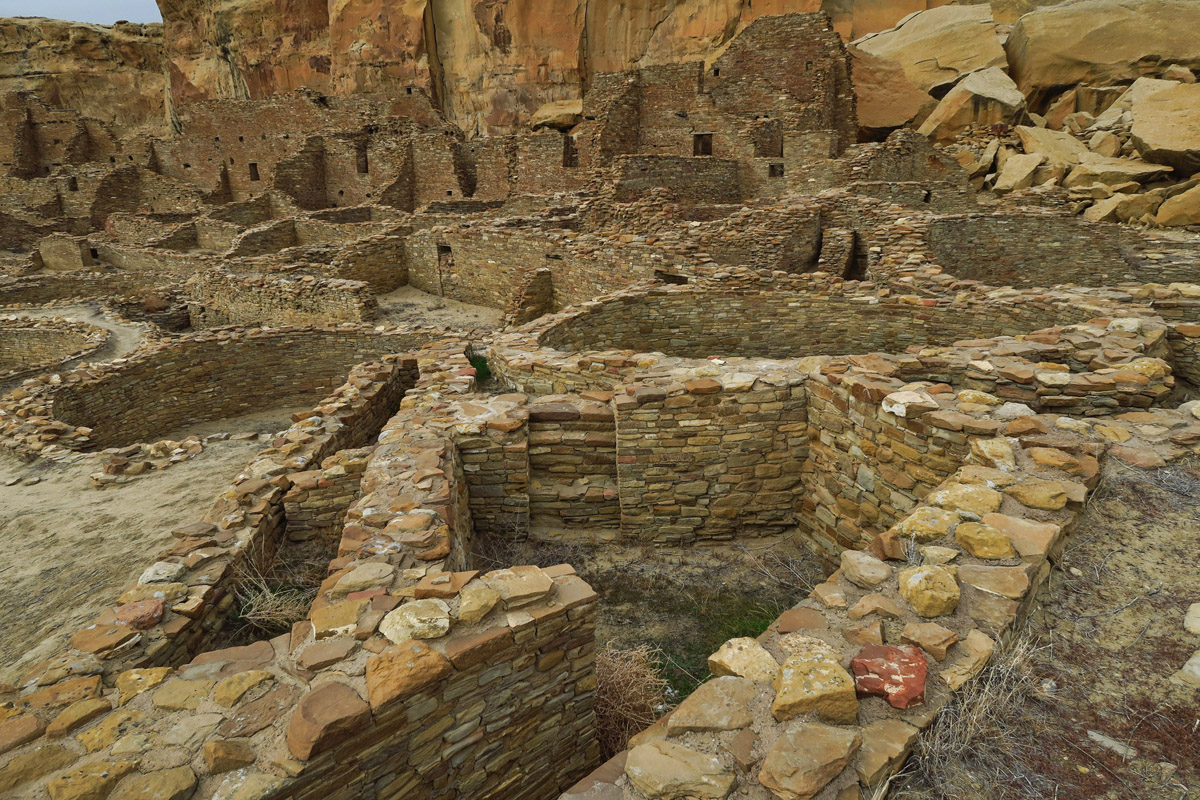 Some rooms were positioned at complex angles. 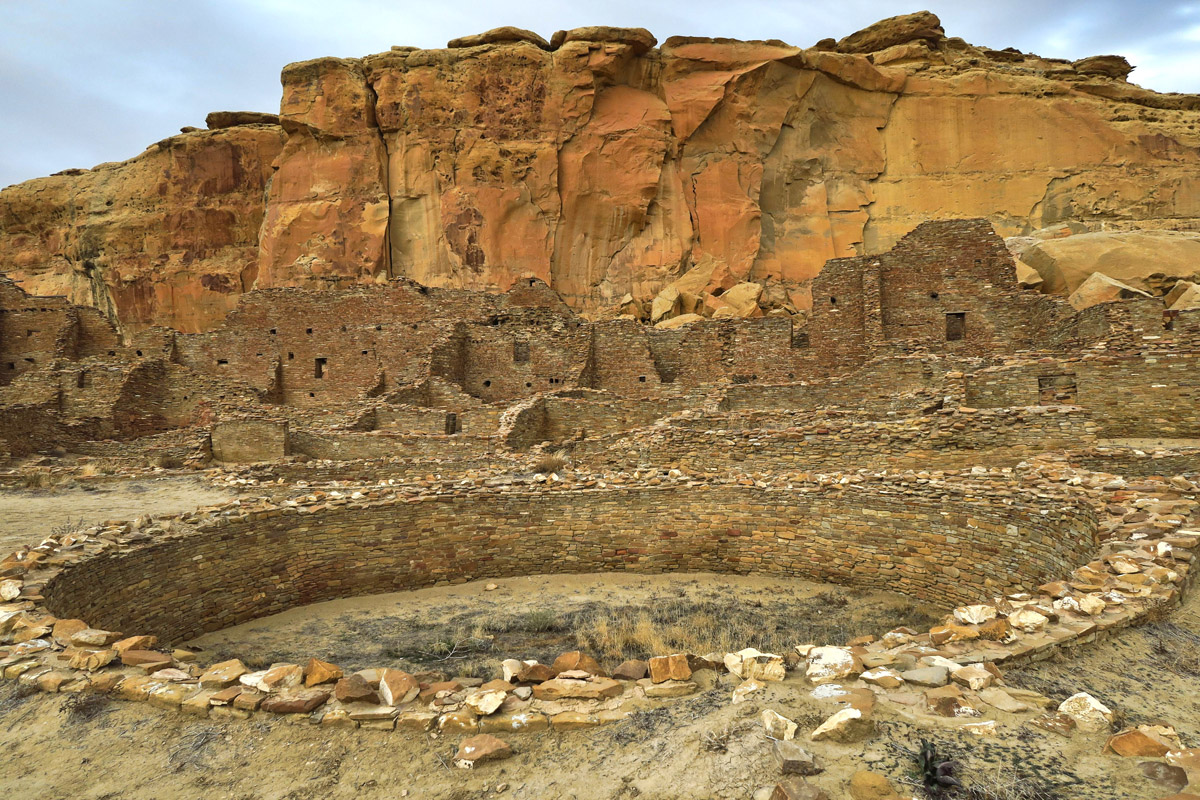 There are many opportunities for hiking and biking in Chaco, but the lack of a suitable road for RVs makes time management a challenge, particularly on short winter days.   I did manage to climb to the overlook over Puebla Bonita, just as the sun peeked through the clouds after a flat gray hazy winter day.   However, this left me racing to exit the park before sundown and get back to the paved road before dark. 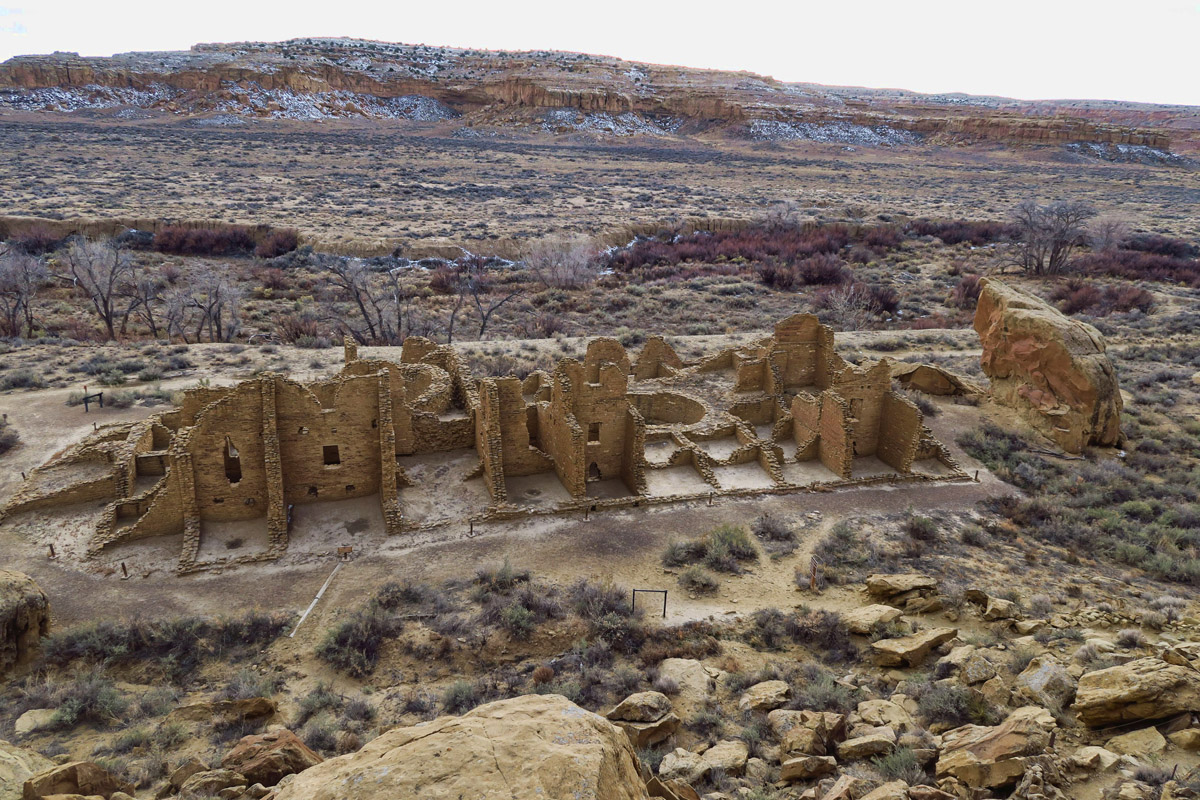 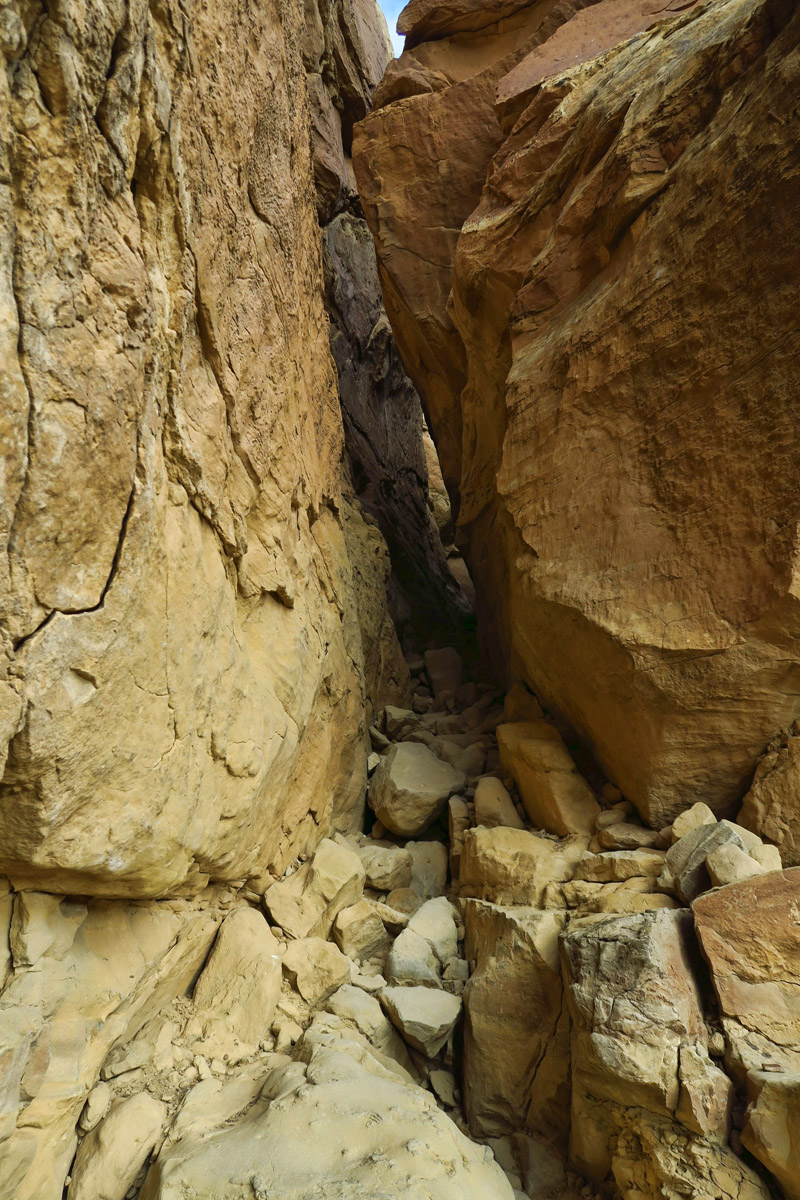 To reach the Puebla Bonita overlook, you must climb through this crack! 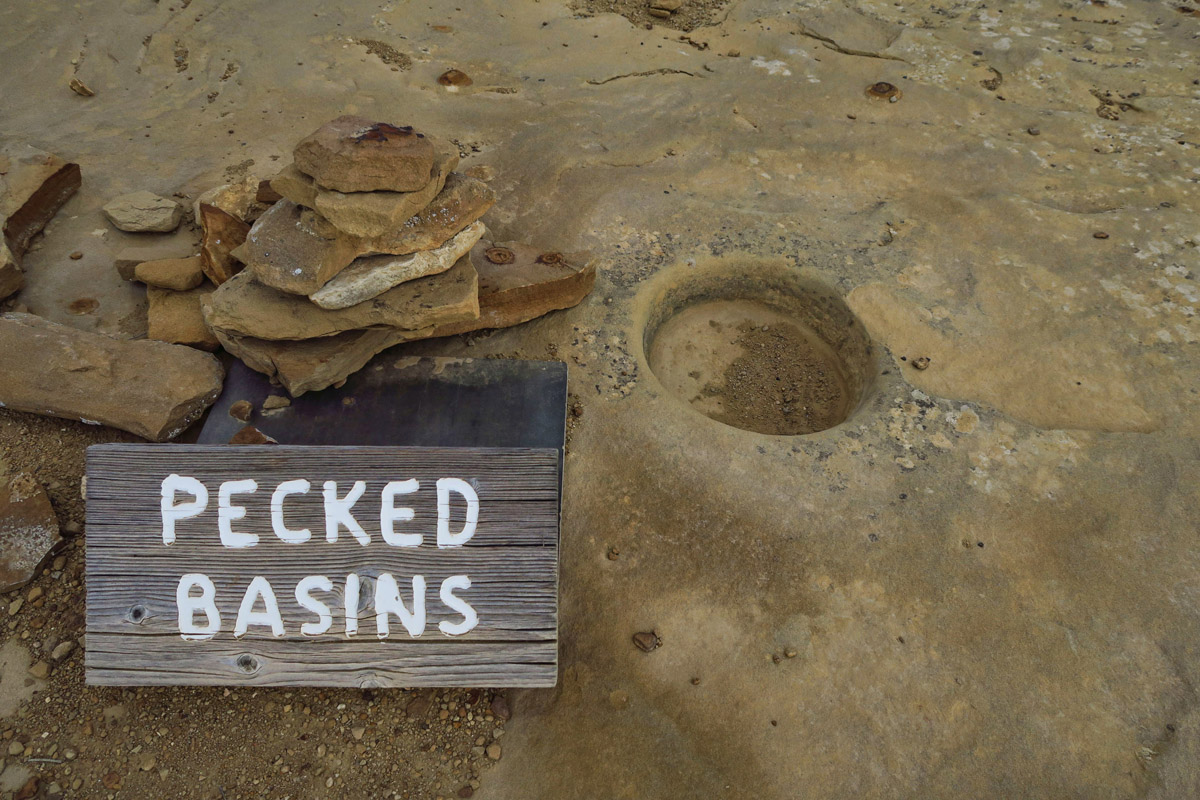 Thankfully, the Chaco Culture National Historic Park, along with a 10 mile buffer has protection under UNESCO, the National Park Service, and multi-agency Chaco Culture Archaeological Protection Site program.   But this only encompasses the sites within the park boundary.   In addition to the 400 miles of roads, there are believed to be other yet to be excavated sites that remain unprotected.   Just last Wednesday, the Bureau of Land Management leased 850 acres of land for drilling for $3 million.  To paraphrase High Country News, a publication that reports on the West’s natural resources and public lands, the sale had been postponed three times over the last five years, because its lands are just 20 miles from Chaco Culture National Historical Park.    The land today is sacred to Navajo, Hopi, Zuni and other Pueblo Indians, and bears remnants of a system of 30-foot-wide roads radiating outward from Chaco Canyon, as well as extensive ruins, artifacts and even lunar calendars etched into boulders. None of those have yet been studied thoroughly by archaeologists, though the land has now been leased to “drill, baby drill.” 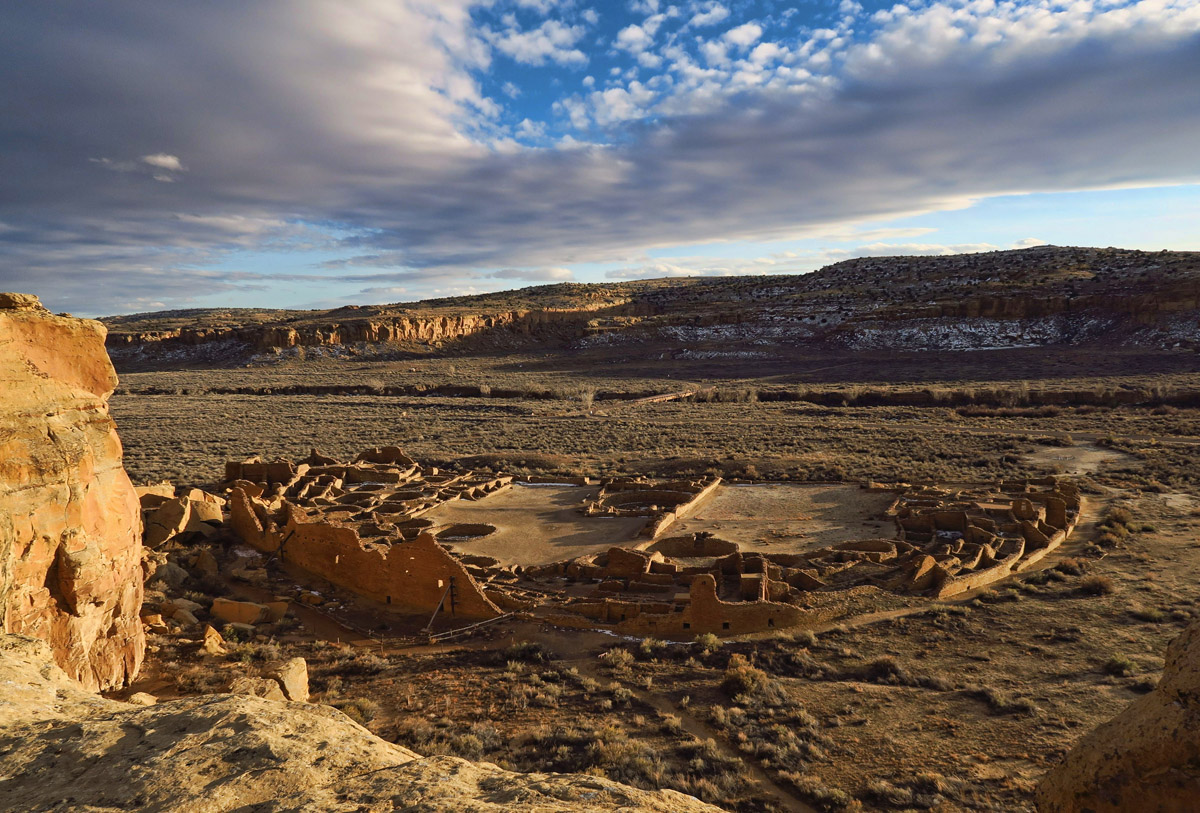 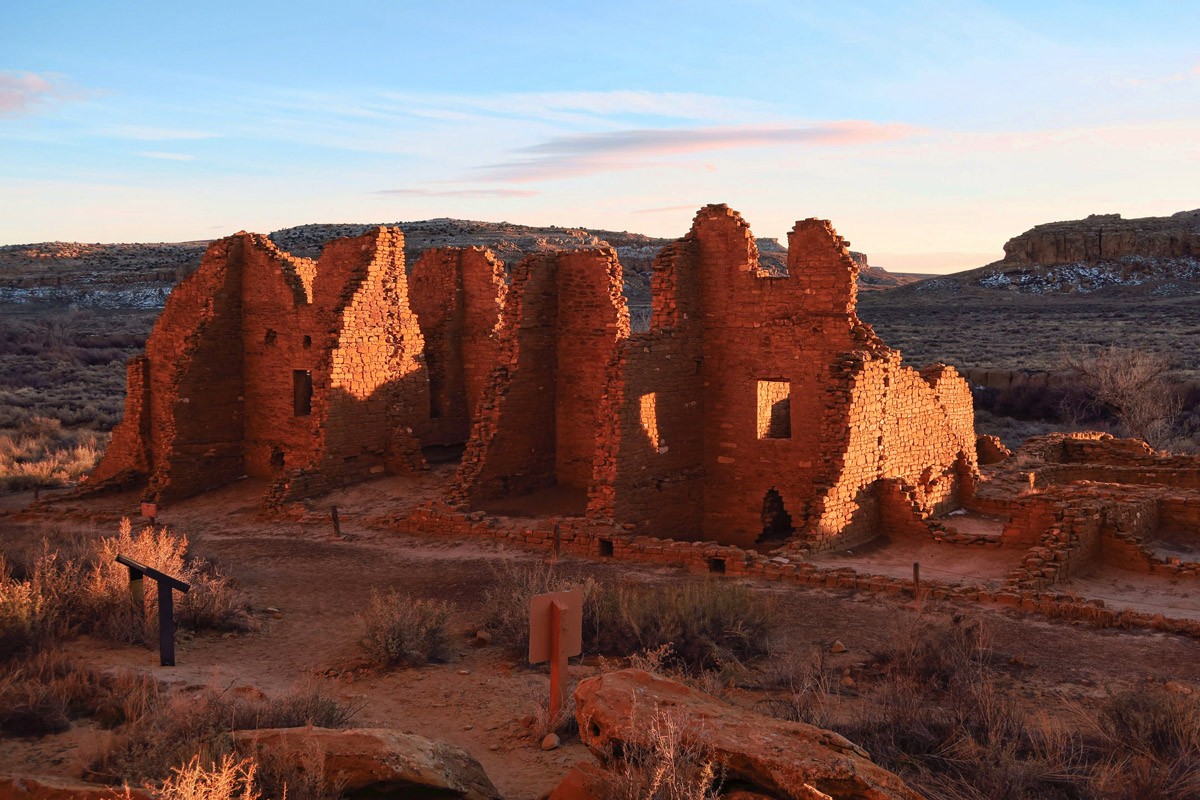 Figures, the sun comes out in the last hour I have to explore the park! 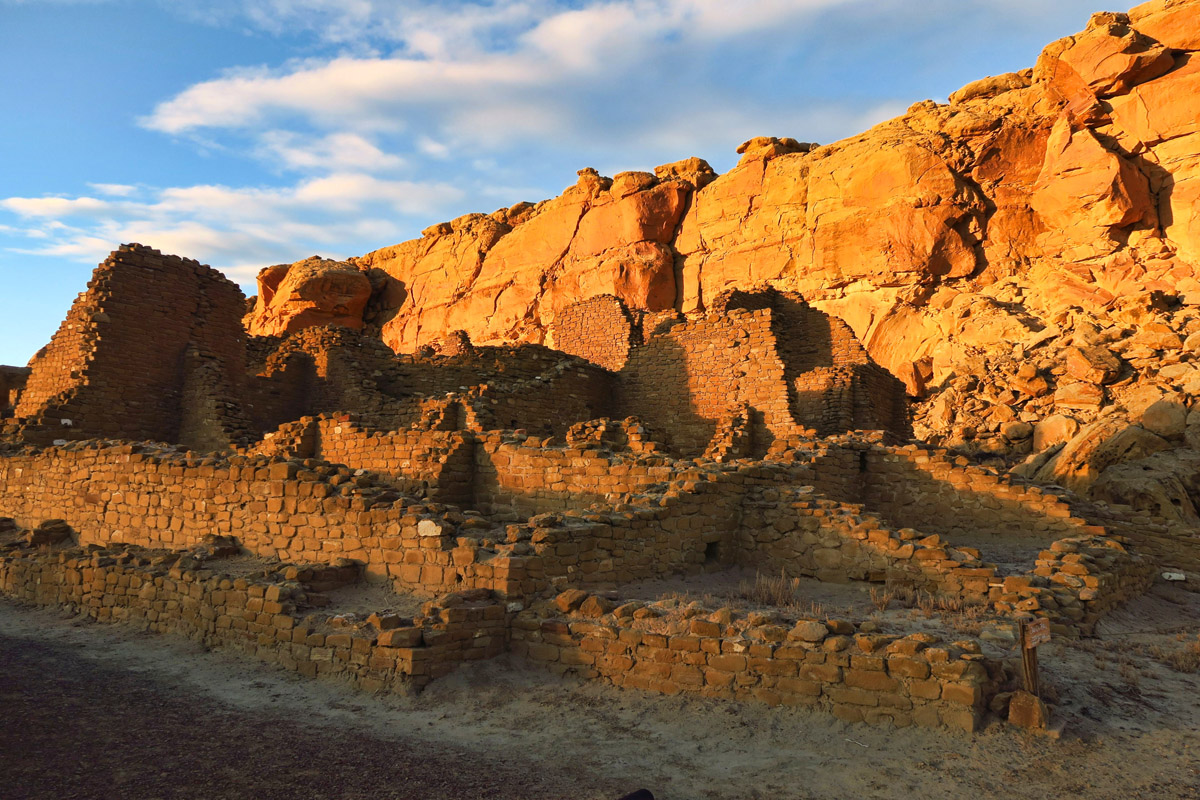 Fracking, shale drilling, oil, destroying our sacred lands….why can’t we learn from these ancient peoples whose entire world evolved around the sun, and see fit to tap into the greatest renewable resource of all time, solar power!

“The idea of wilderness needs no defense, it only needs defenders.” ~Edward Abbey
(Happy Birthday, Mr. Abbey. Had you lived to see your 90th birthday, I think you would be proud of our altnps.org defenders!)

22 thoughts on “The Roads to Chaco”