NOTE:  Thanks for all your wonderful comments and support on my “Dear Mr. President” post.   I’ll get back to life in Mexico soon, but first, I have a few posts to catch up on, lest I forget the last days of my southerly winter migration…

Anyone who knows me knows that I’m a national park junkie.   I have lofty aspirations to visit all 59 with the official “Park” status. Some I will not likely make…like those hard-to-reach parks in far northern Alaska, accessible only by flying or hiking (If anyone is headed that way and wants a hiking partner, look me up!)   And then there is the park in the Solomon Islands…not as difficult to reach, but still requires some serious travel planning.  But as for those in the “Lower 48,” well, I see no reason why I can’t eventually get to them all throughout my meandering.    Some may call it a “bucket list” or “passport stamp collecting,” but I rather prefer to think of it as a hobby…

One national park which I crossed off the list as “been there, done that” long ago has been nagging at my conscience, The Petrified Forest.  I remember visiting a place with petrified wood on display during one of our family cross-country vacations.   I verified this with Mom, who has a memory like a steel trap.  But even she can’t say for sure.   We both have recollections of a requisite roadside tourist stop to marvel at the mineralized logs, but neither of us can say for sure it was the Petrified Forest.   So after seeing the roadside sign on my way down I-40 when leaving the Grand Canyon, I figured I’d just swing through, just to see if anything looked familiar.  Maybe an hour, at the most…. 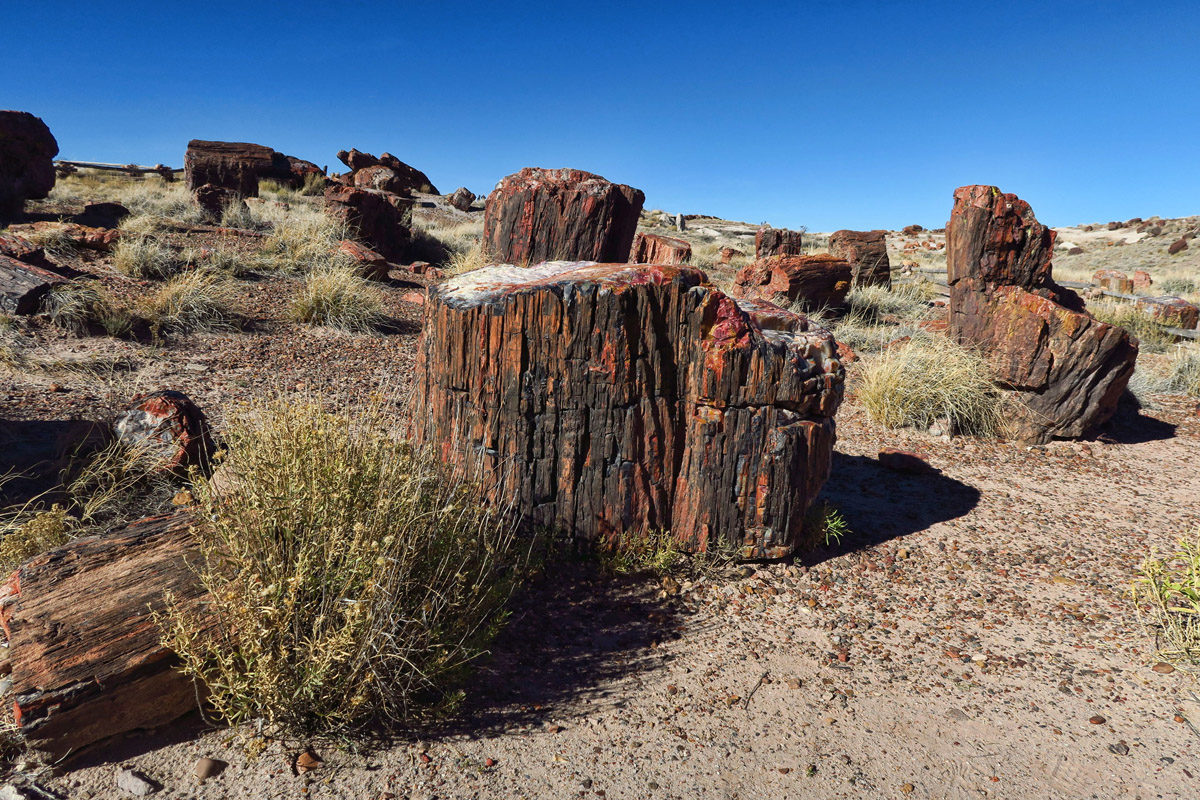 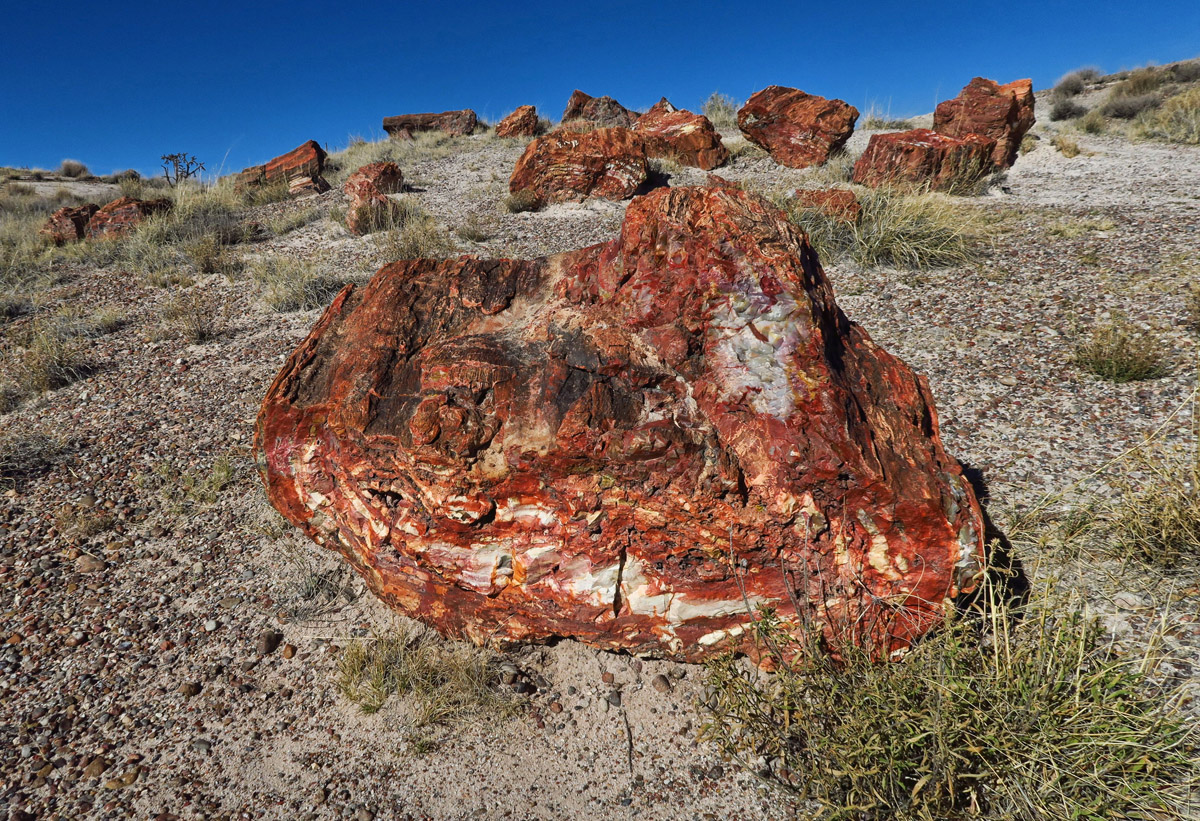 A quick look at the NPS website suggests entering the park south of Holbrook, AZ  along Hwy 180 and exiting the north entrance onto I-40, the direction in which I’m already heading.   A short detour of the 28 mile drive with a couple of stops along the way will give me a good overview of the park, and ease my conscience for checking off a national park that I may or may not have visited.   Five hours later… 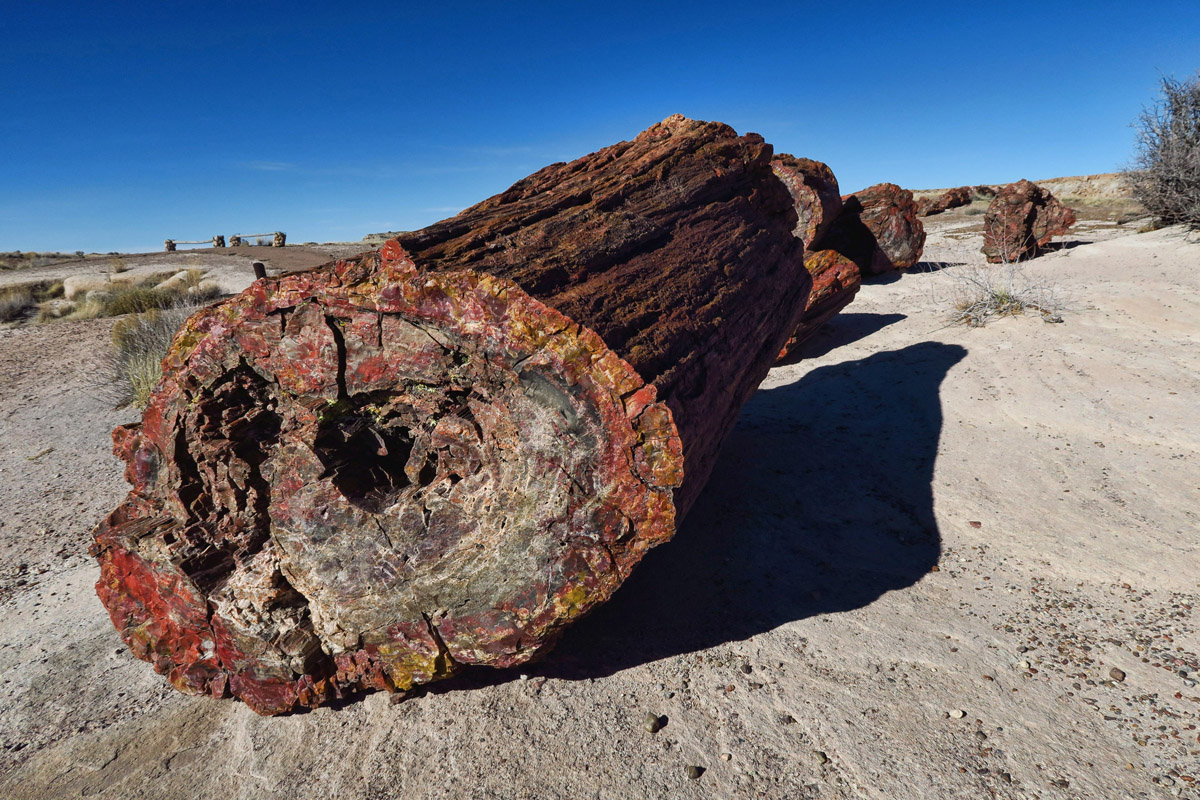 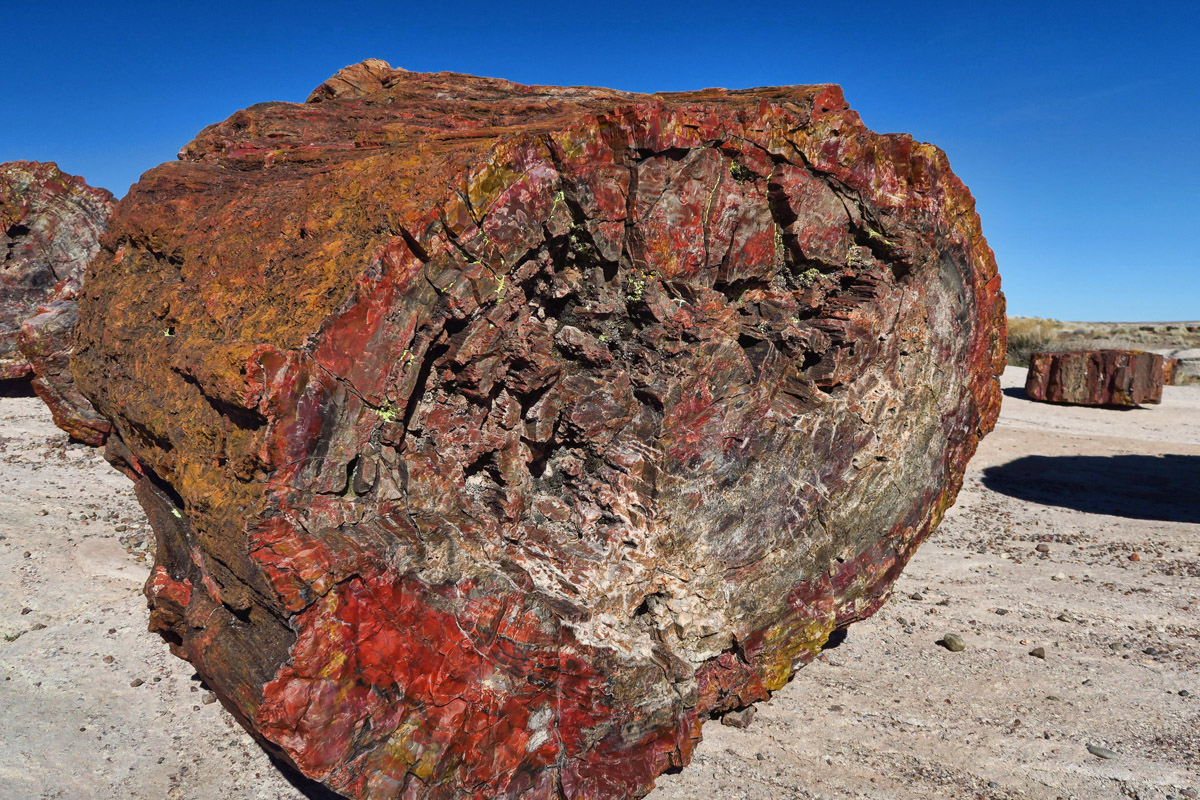 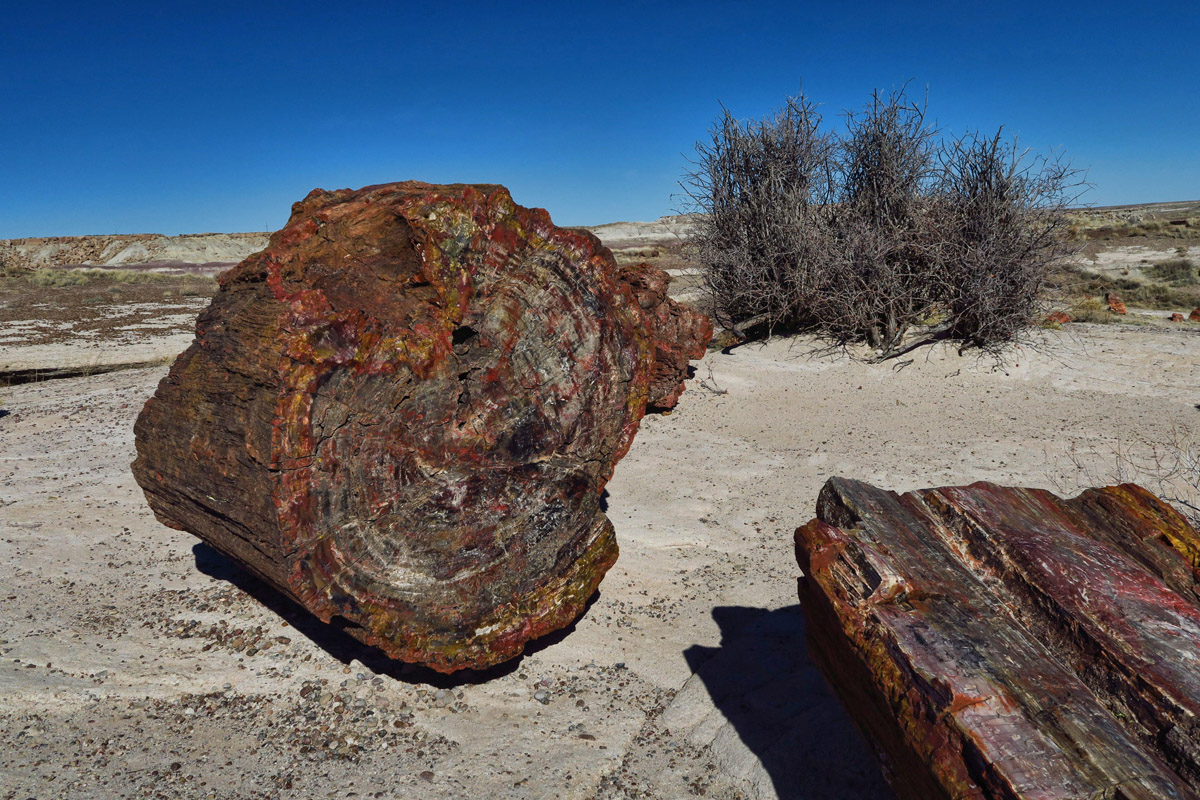 After a stop at the Rainbow Forest Museum, the south end visitor center, I realize the Petrified Forest National Park is so much more than a former forest of fallen tree trunks turned to stone.  There are hiking trails through badlands, ancient Puebloan sites and petroglyphs, overlooks with miles of variegated colors of desert, a stretch of the original Route 66, and the Painted Desert Inn, now on the National Register of Historic places.   It’s like several mini attractions rolled into one national park. 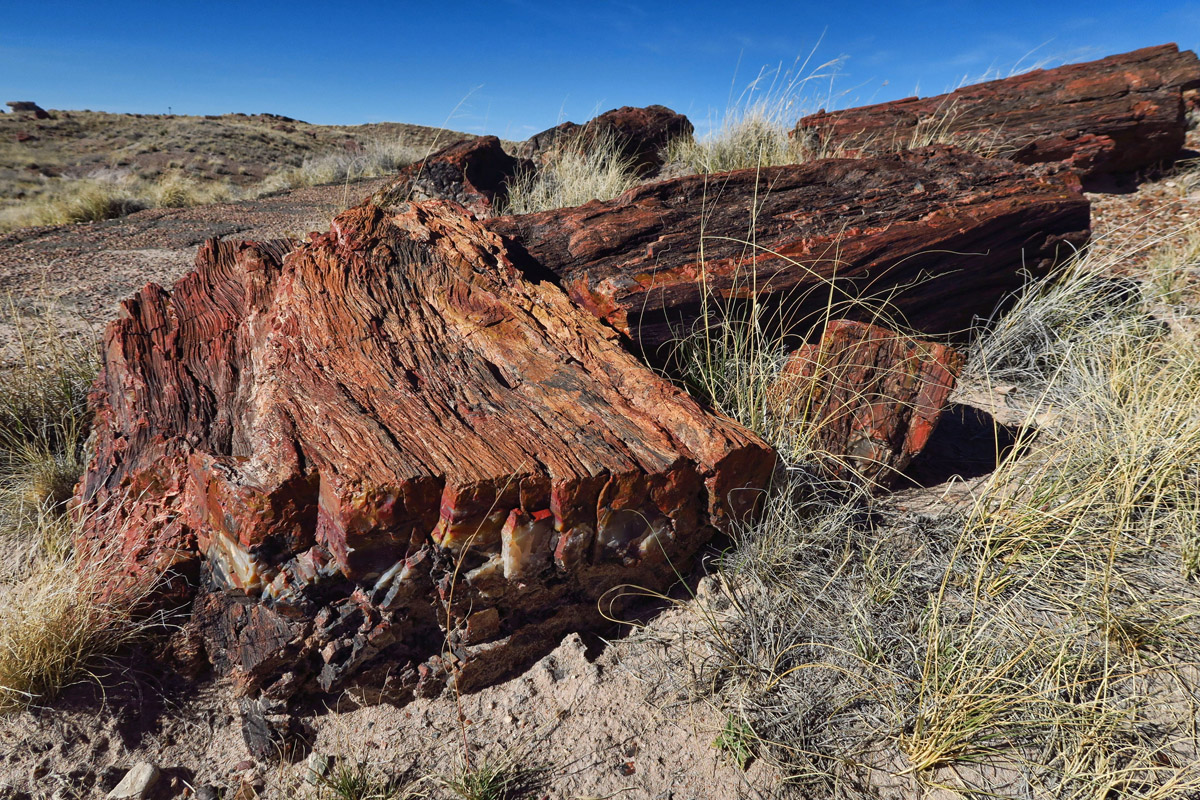 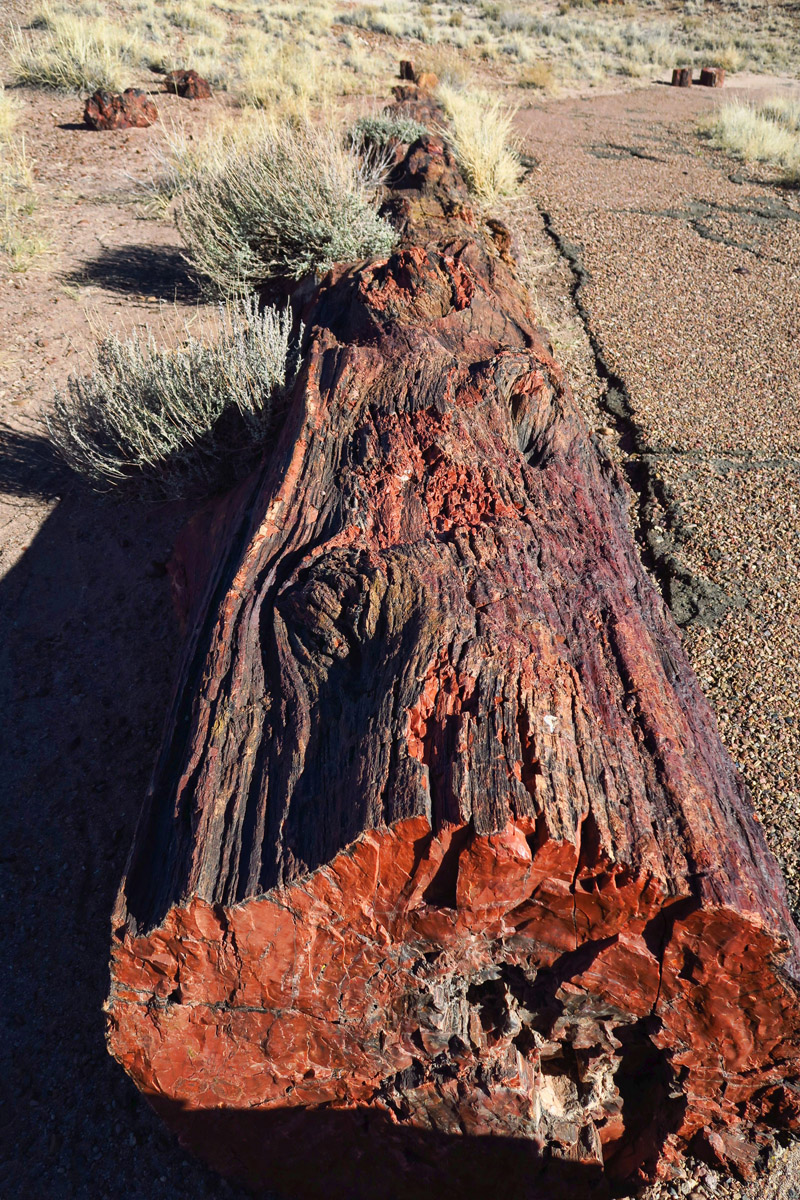 Knots indicate where branches once were. 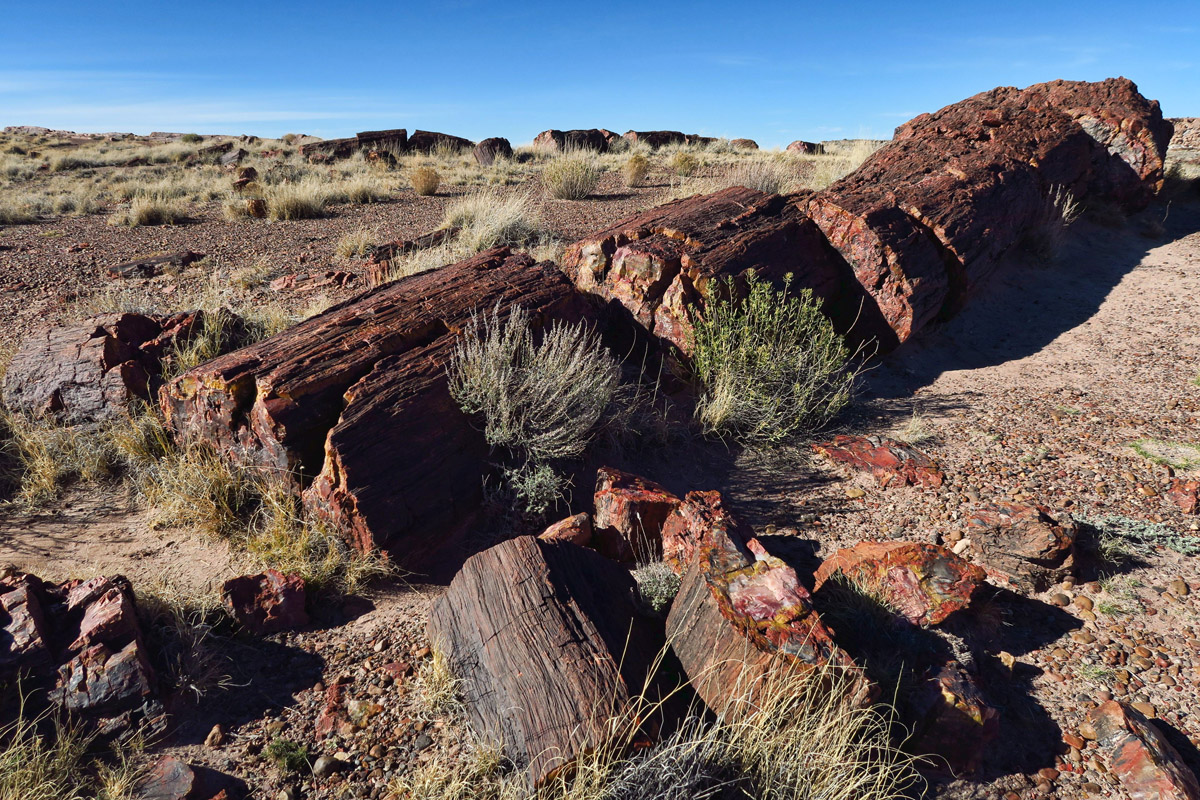 Crystallization is responsible for the clean, even break in the logs.

Entering from the south end from Highway 180, at the Rainbow Forest Museum is a short half mile loop trail called “Giant Logs.”  This trail features some of the largest logs in the park, one up to 10 feet in width at the base.

A log gets petrified when its original plant material is replaced by minerals.  This process occurs when a fallen log becomes saturated with mineral-rich water, most often in volcanic environments.  Eventually the silica deposits crystallize, turning the logs to stone.  Nine species of trees have been identified in the park, all now extinct. 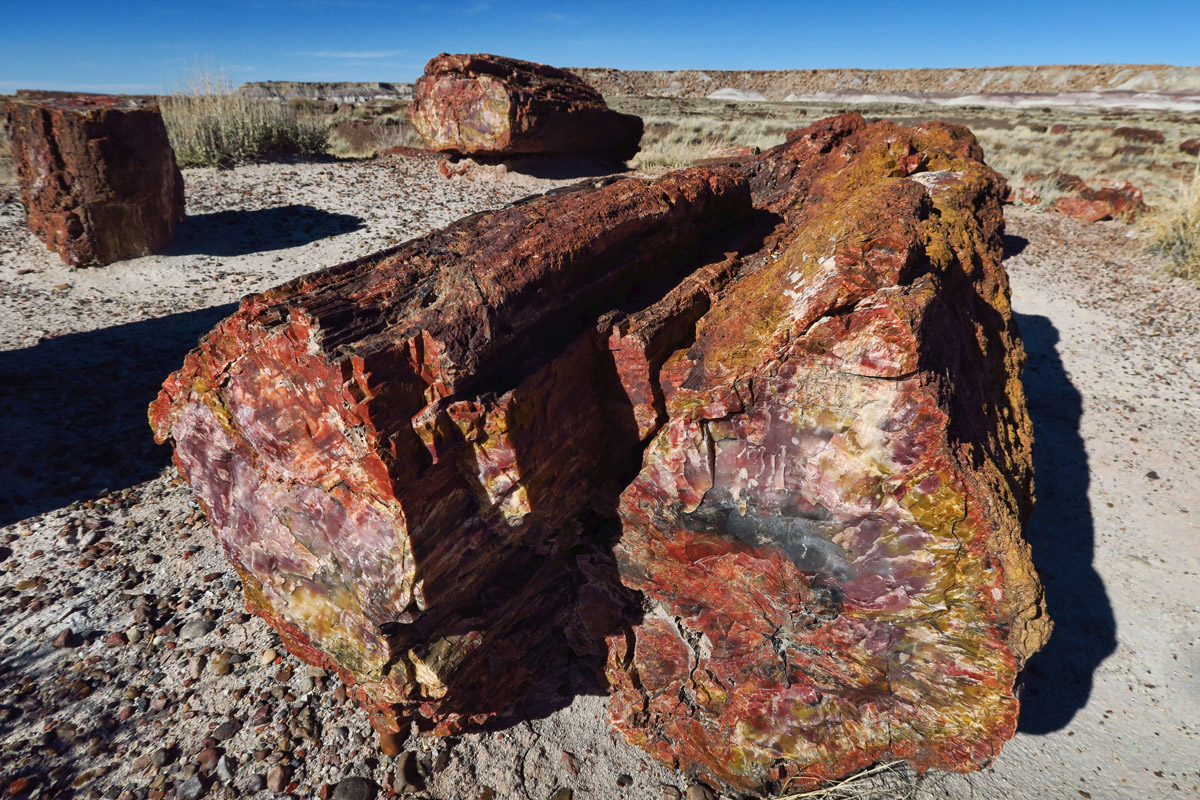 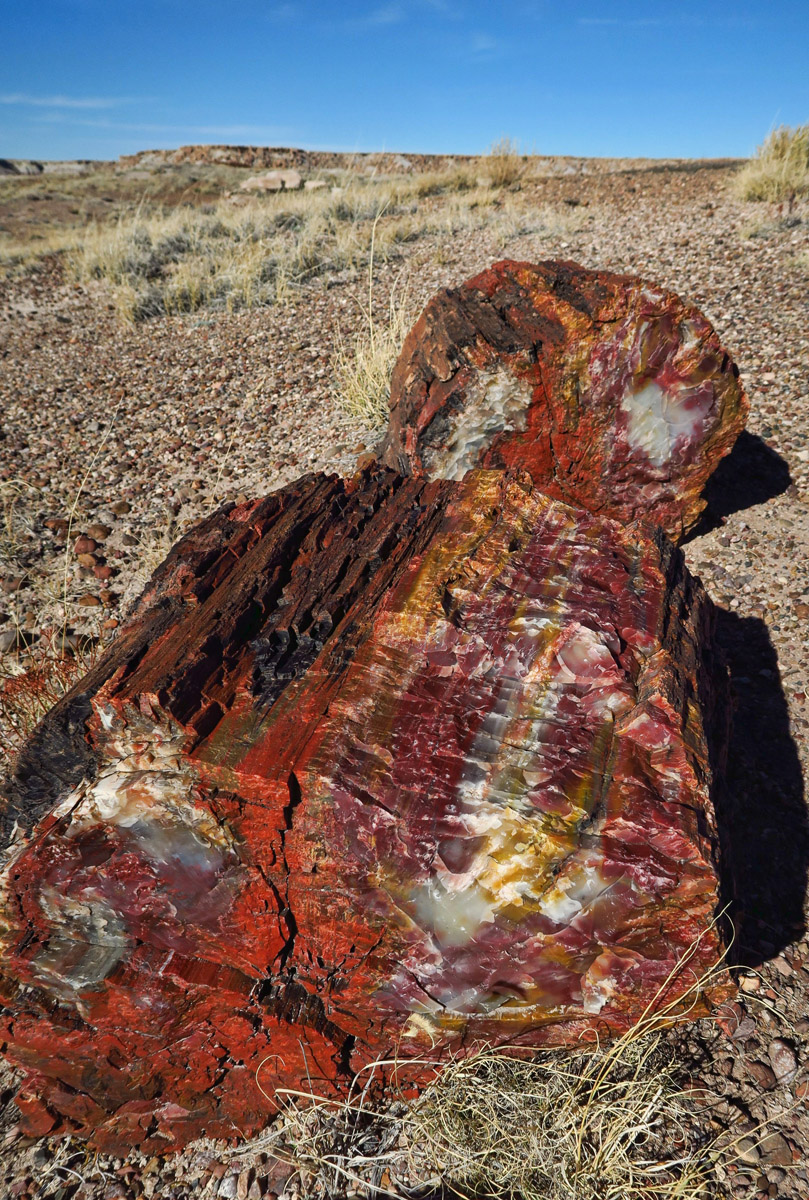 Mineral impurities in the stone trees give them their color;  iron oxides give red, yellow, orange and purple veins.    Manganese oxides are black and grey, while pure quartz provides white deposits.  While the initial stages may take only decades, it takes millions of years for the molecular structure to produce these colorful quartz formations. 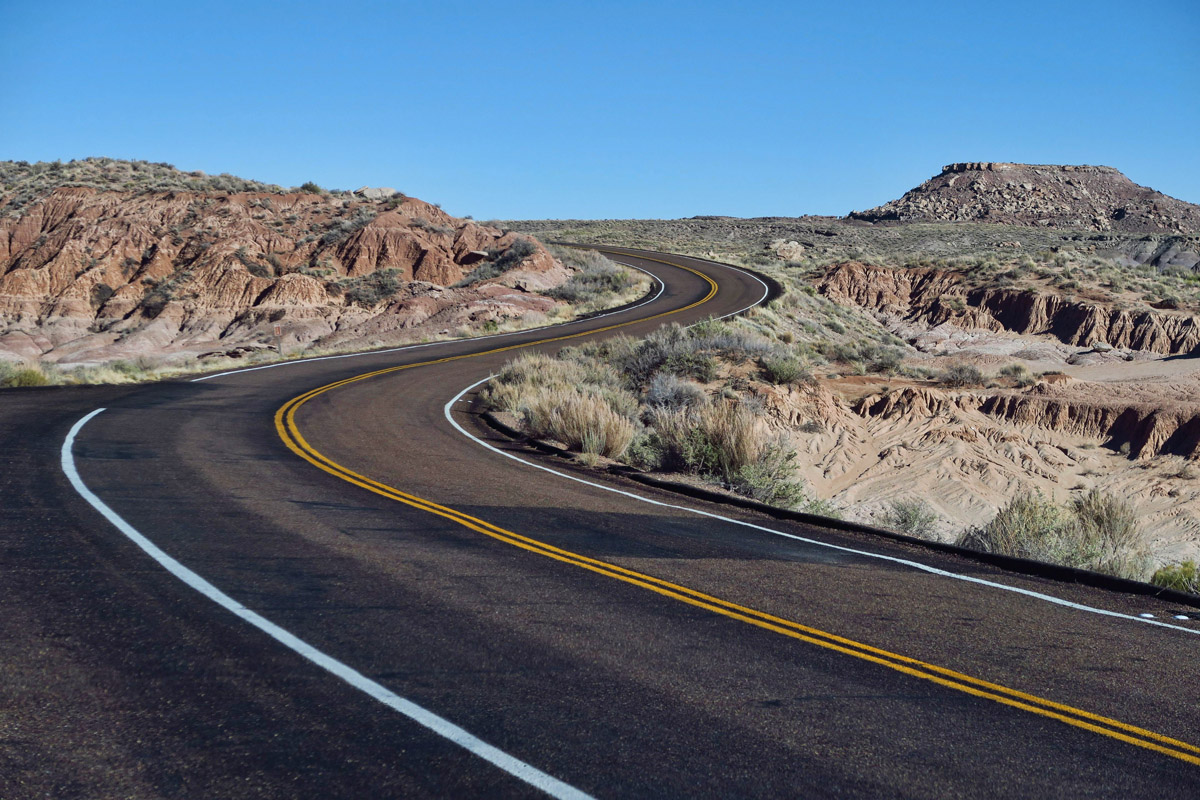 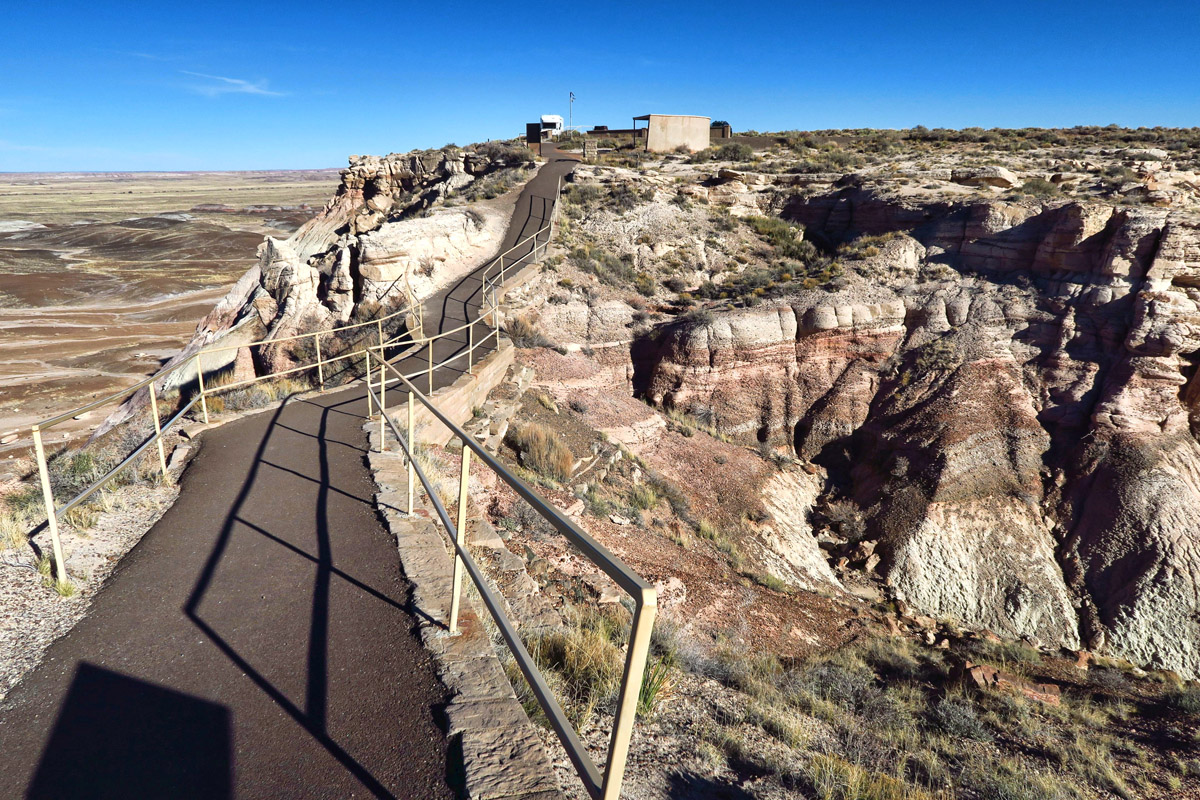 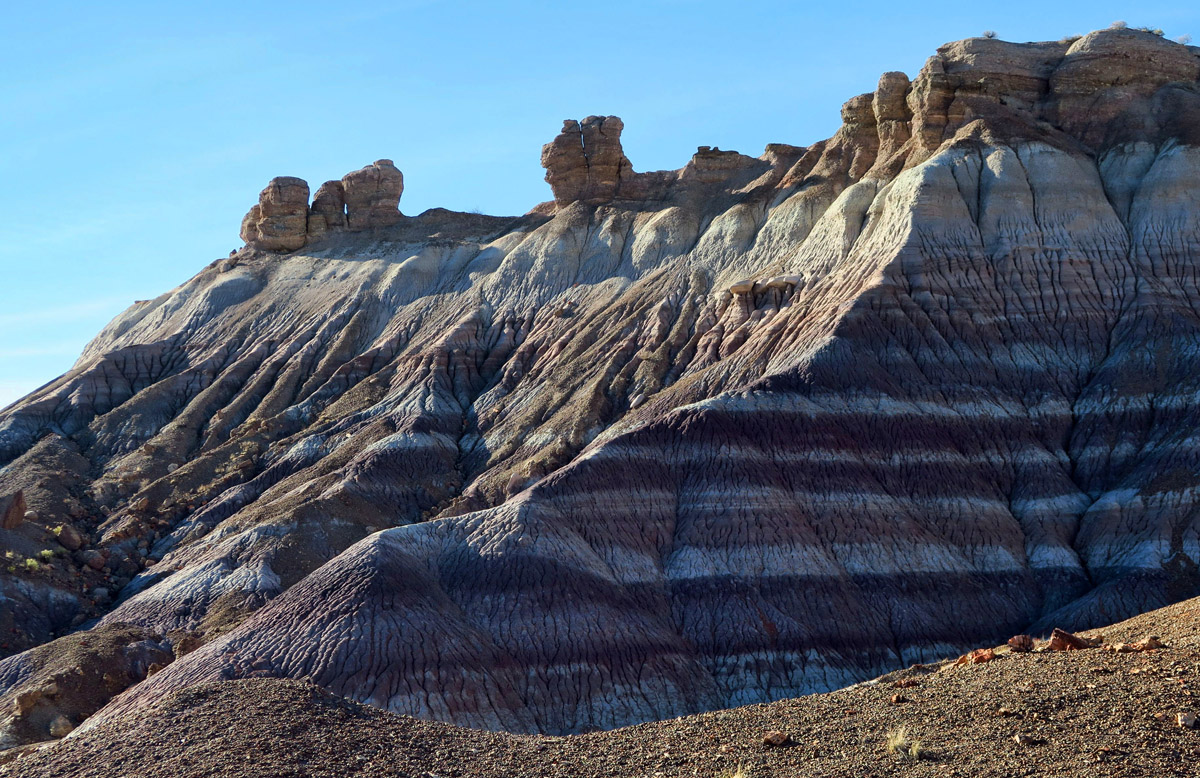 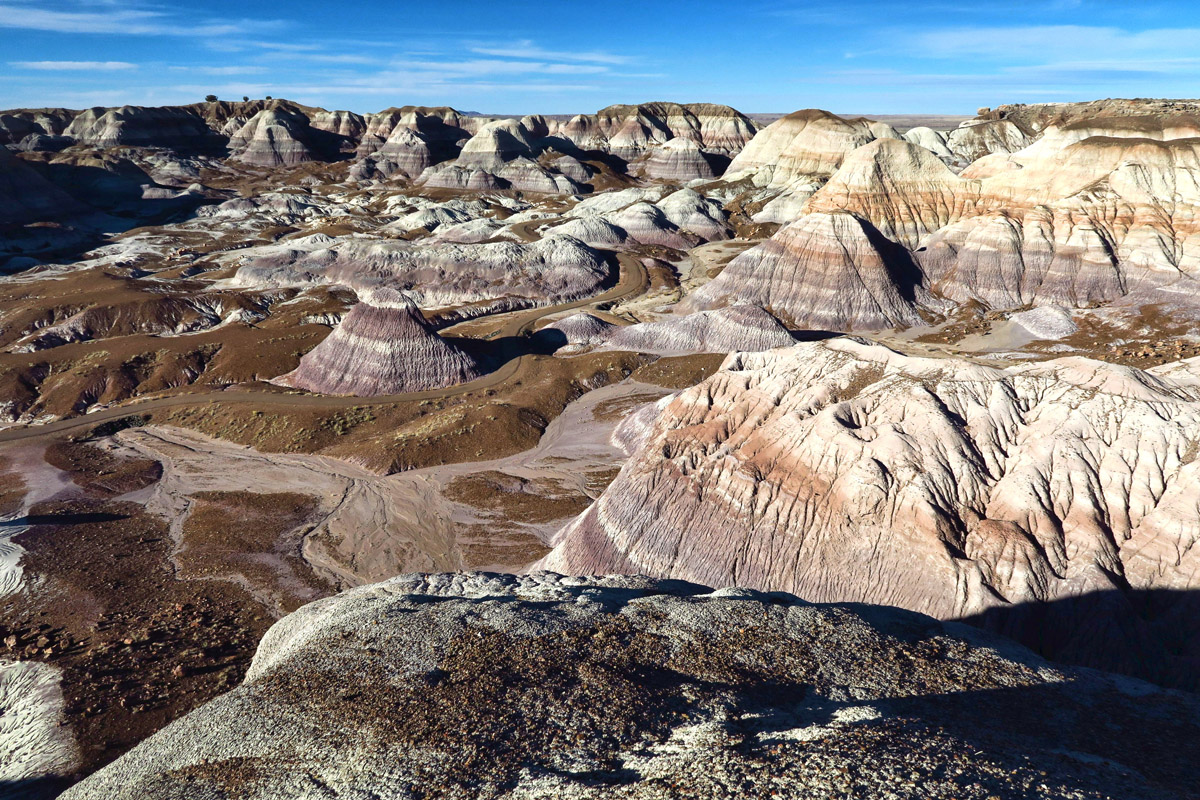 After a few more stops at the Crystal Forest and several scenic pullouts, I encounter a phenomena of a different sort….the “Blue Badlands.”   A trail leads down through hills and undulating valleys of blue, lavender, and grey striped “elephant skin” made from bentonite clay.    There is no one else on this 3.5 mile loop trail, leaving me with the feeling that I am on an alien planet. 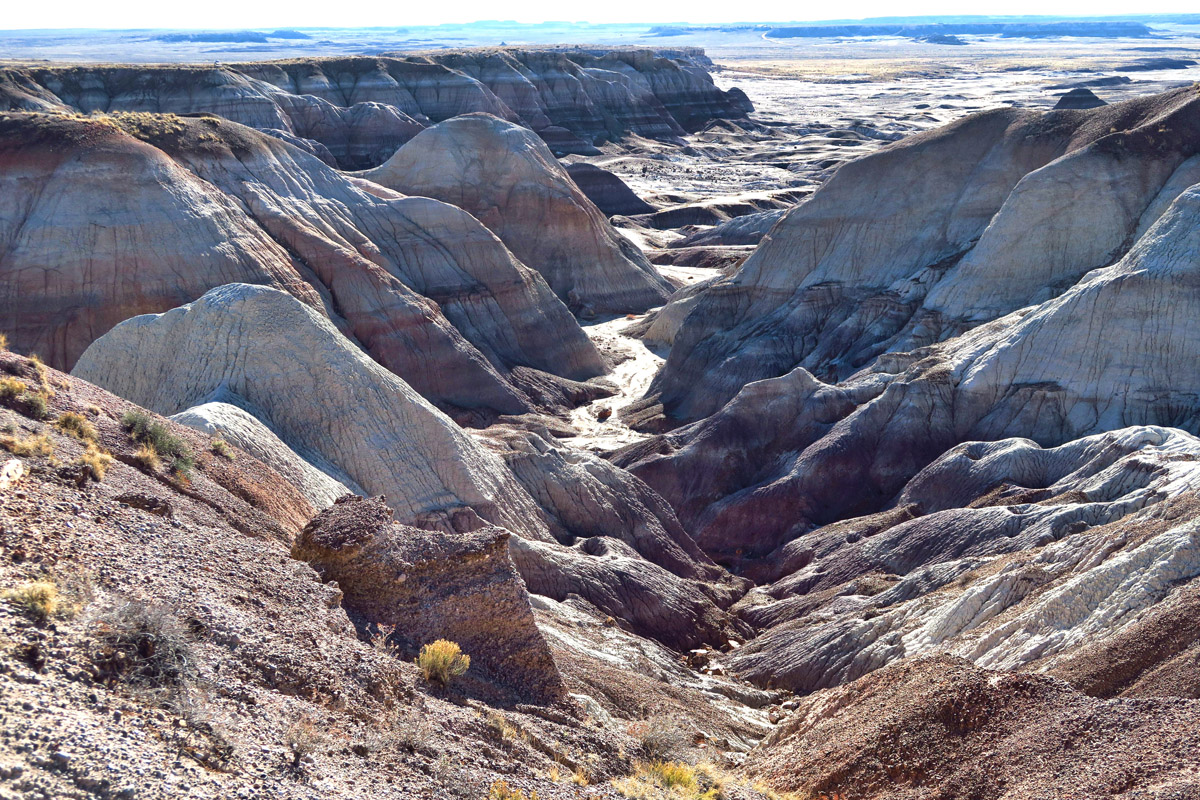 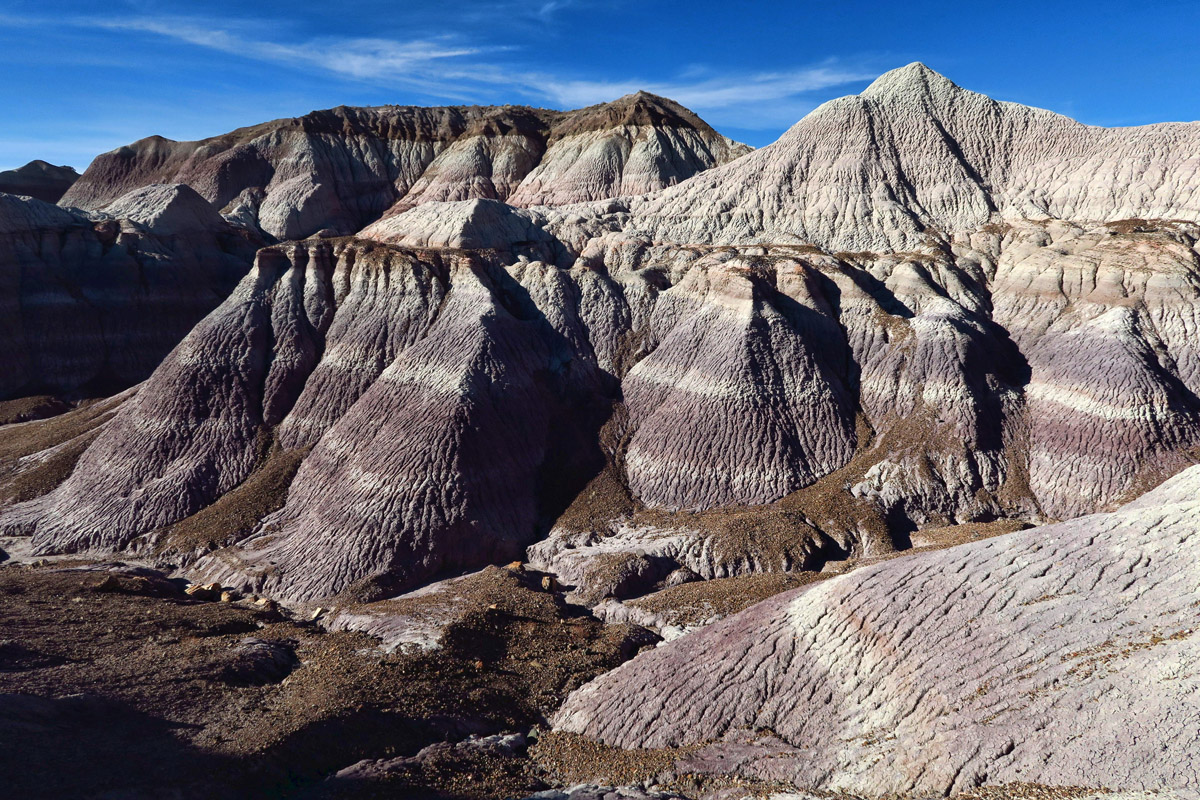 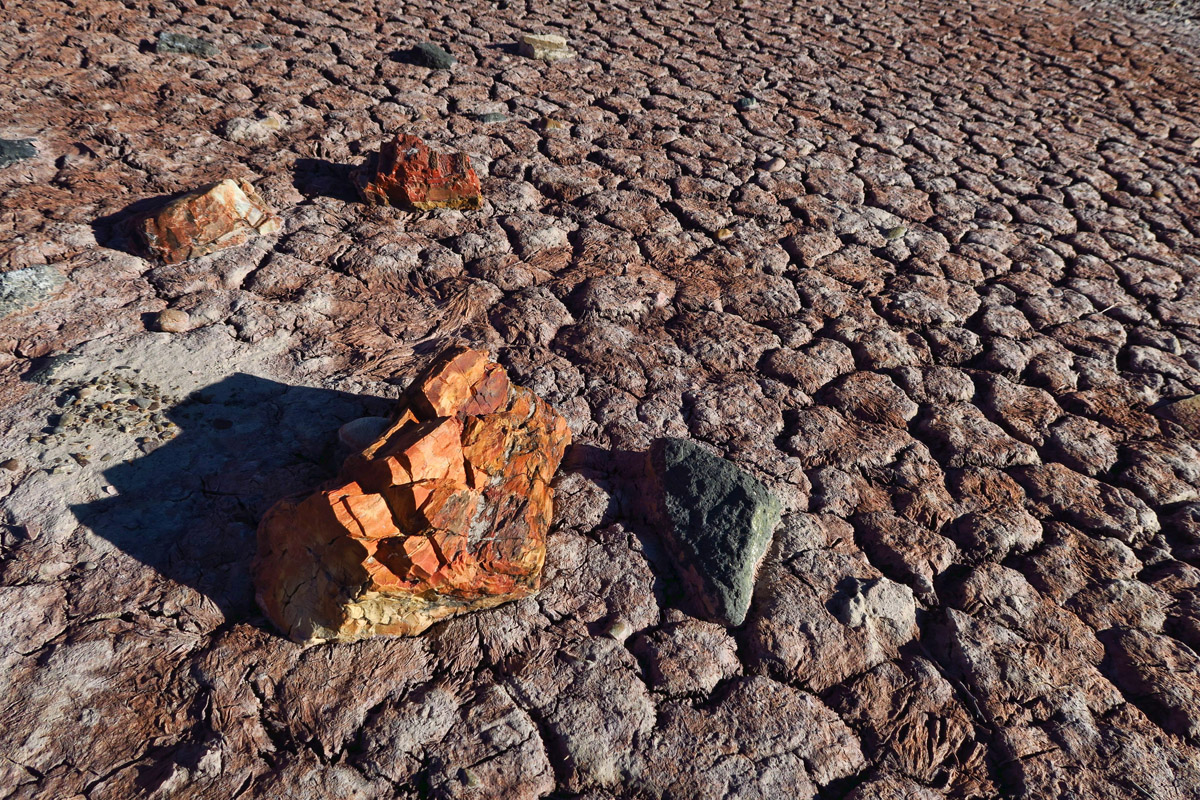 Pieces of petrified wood dot the surface of the Blue Badlands. 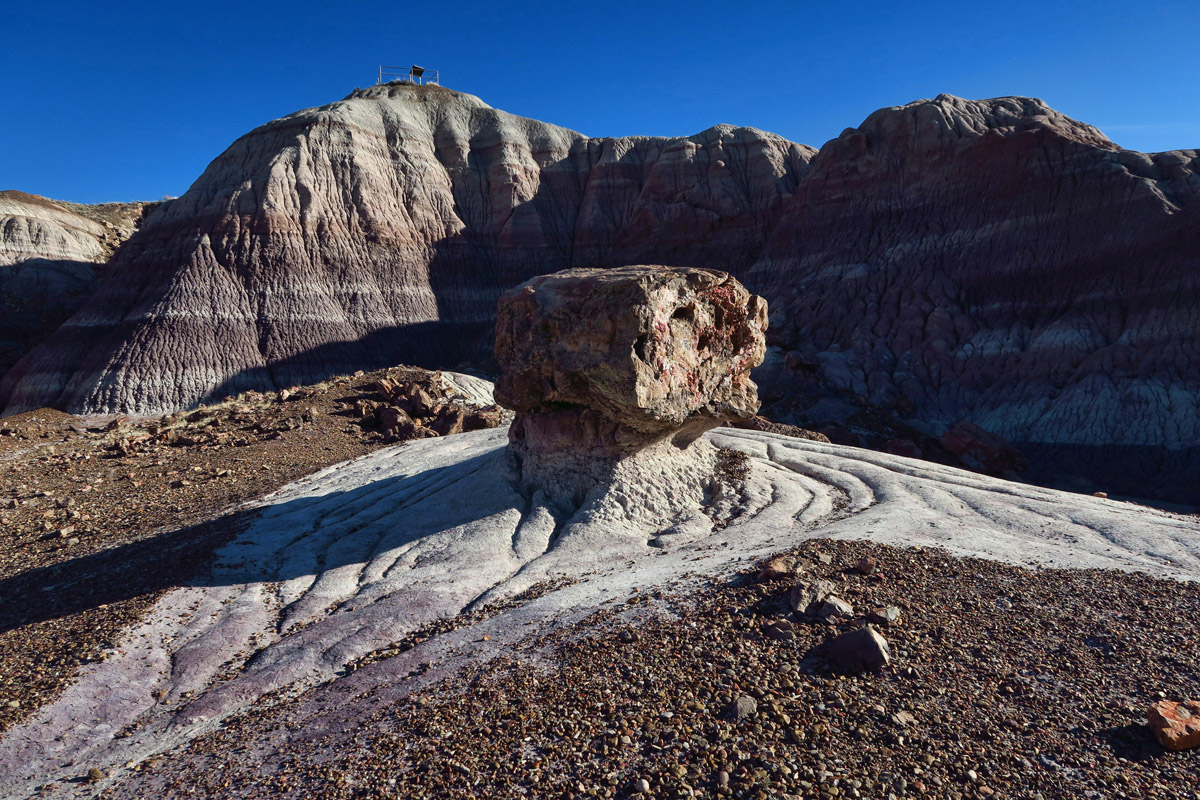 At the bottom of the Blue Badlands trail… 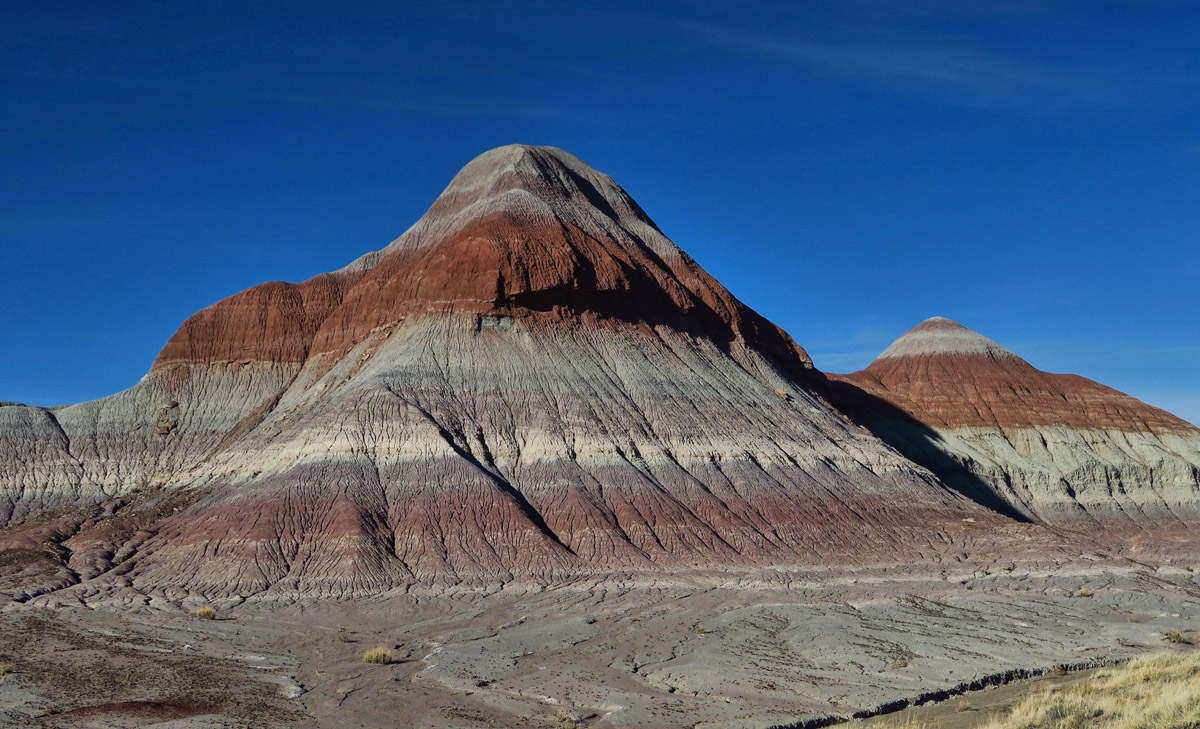 As I approach the northern end of the park, a 1932 Studebaker standing in the shadow of some retro telephone poles marks the spot where the original Route 66 once cut through the park.  Petrified Forest National Park is the only park which protects a stretch of the original Mother Road, established in 1926.  This iconic highway was once a destination in of itself, and no doubt a trigger for my childhood memory, prompting me to ask the question, “Did we or didn’t we?”  As a road tripping family, my Dad always wanted to head west, and as the 1946 song suggests, “get your kicks on Route 66” certainly held much of that allure.  I can still remember my Dad, tall and slim and always wearing a Stetson.  Road trips would have him coming out the screen door of the “filling station” with a green glass bottle of Coca-Cola, filled with a bag of Lance’s peanuts bobbing on the surface. 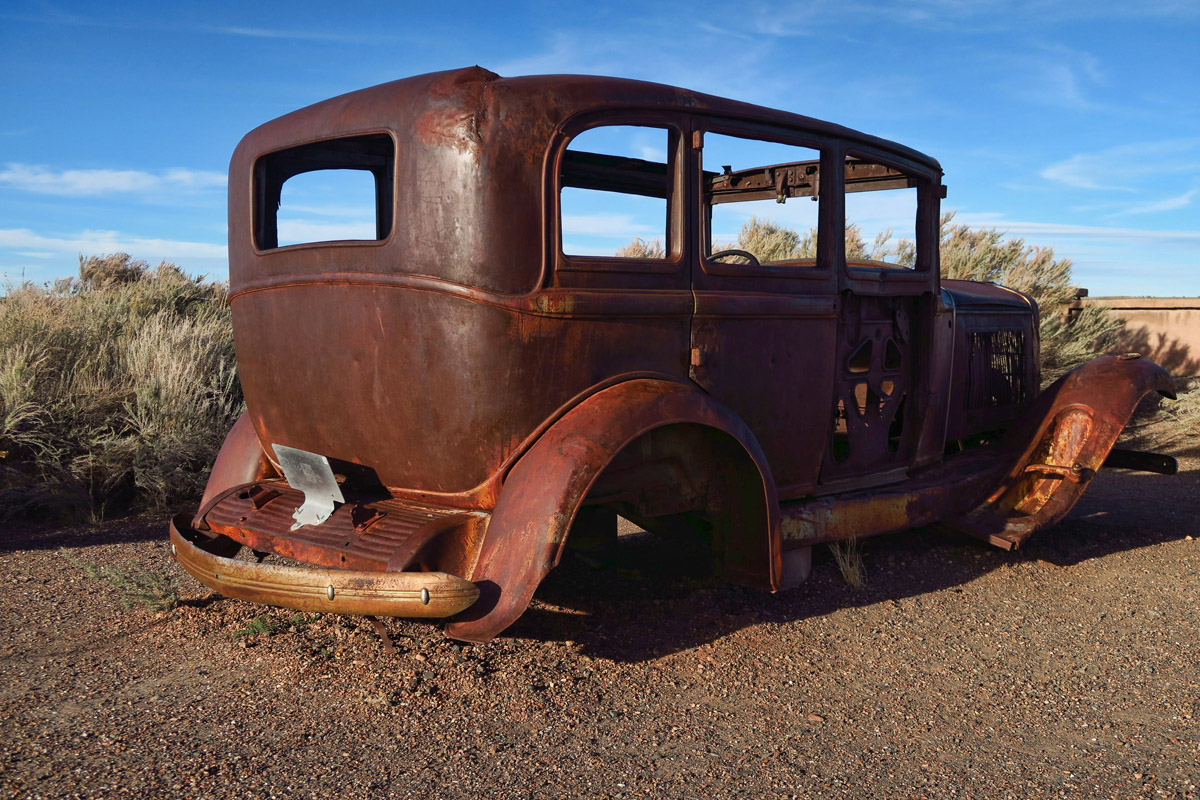 1932 Studebaker marks the alignment with the original Route 66. 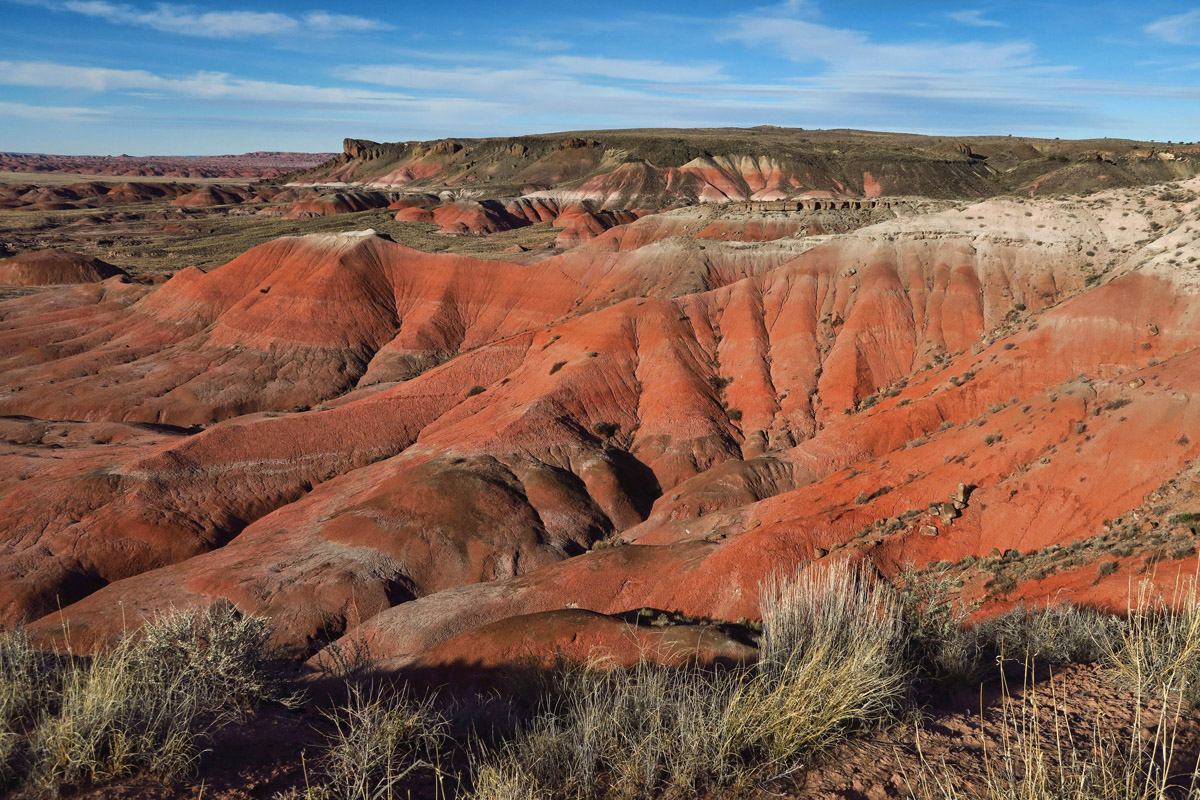 Beautiful views from vistas along the park road, overlooking the Painted Desert. 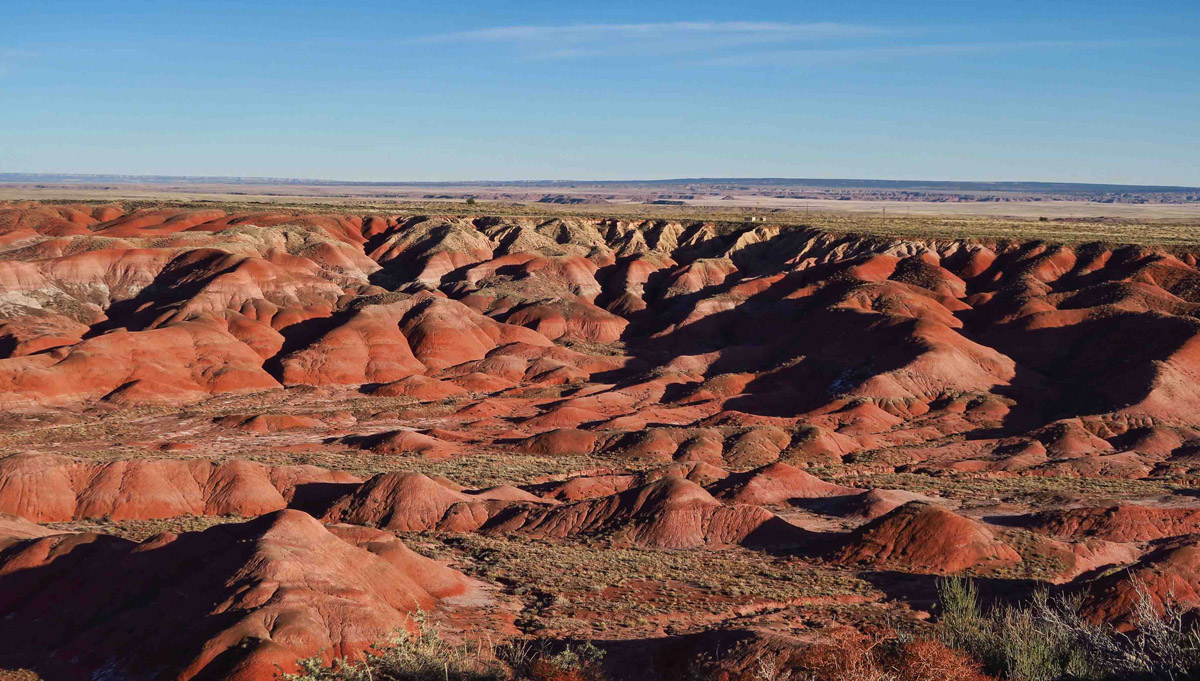 There are numerous hiking trails. I am running out of time, otherwise I would stay and hike a few…

The northern end of the park near today’s version of Route 66, Interstate 40, is a different scene altogether.   Vistas along the road overlook Arizona’s beautiful Painted Desert, a larger, fiery red version of the undulating hills of the Blue Badlands further to the south.  It’s also the location for the historic Painted Desert Inn, built of petrified wood and native stone.  Built before the 1920’s, preserved by the CCC in the 30’s, and seeing its heyday during the Route 66 era, the Inn was established as a National Historic Landmark in 1987. 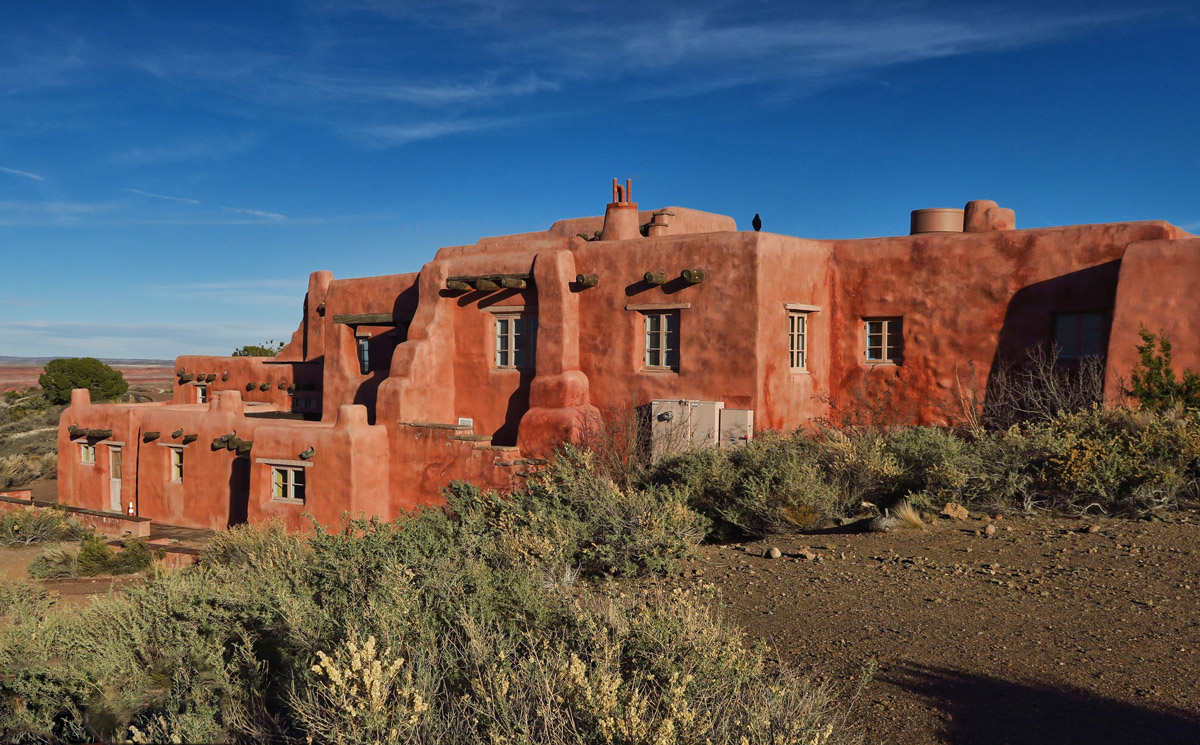 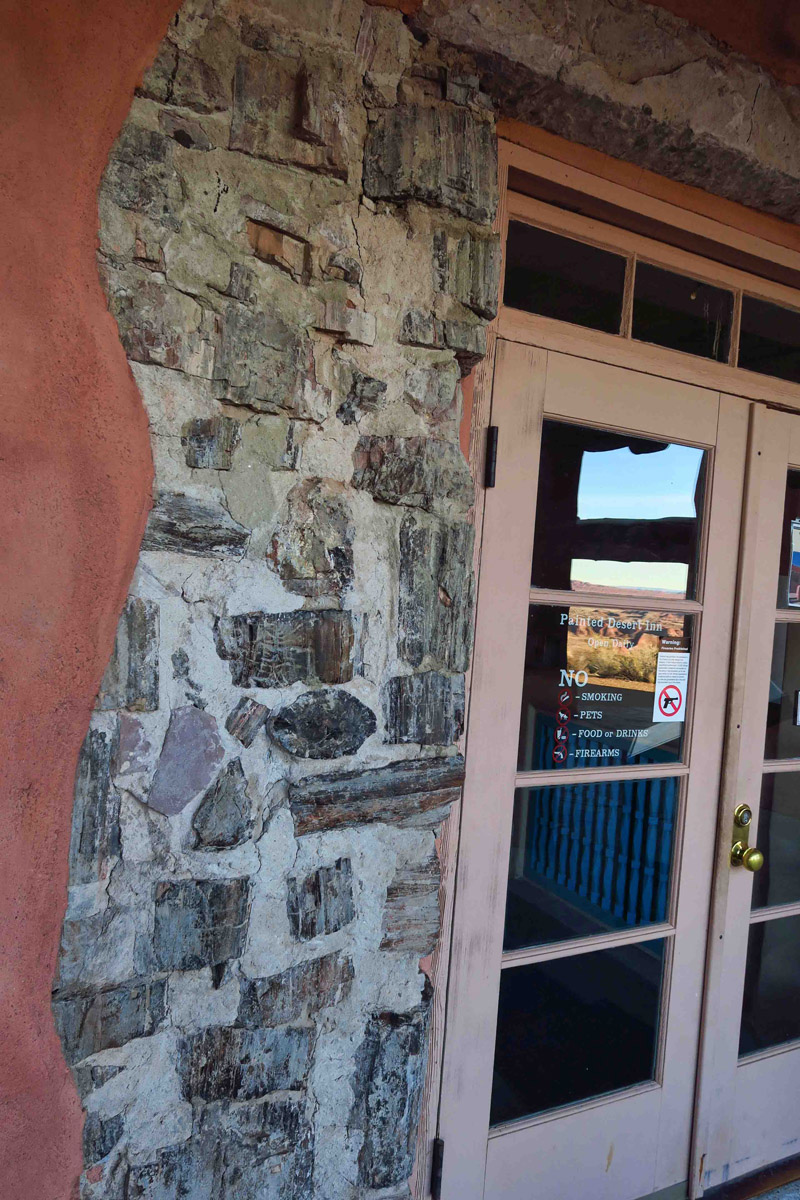 During original construction, wood was in limited supply. Before conservation efforts, petrified logs were used in the construction of the Inn. 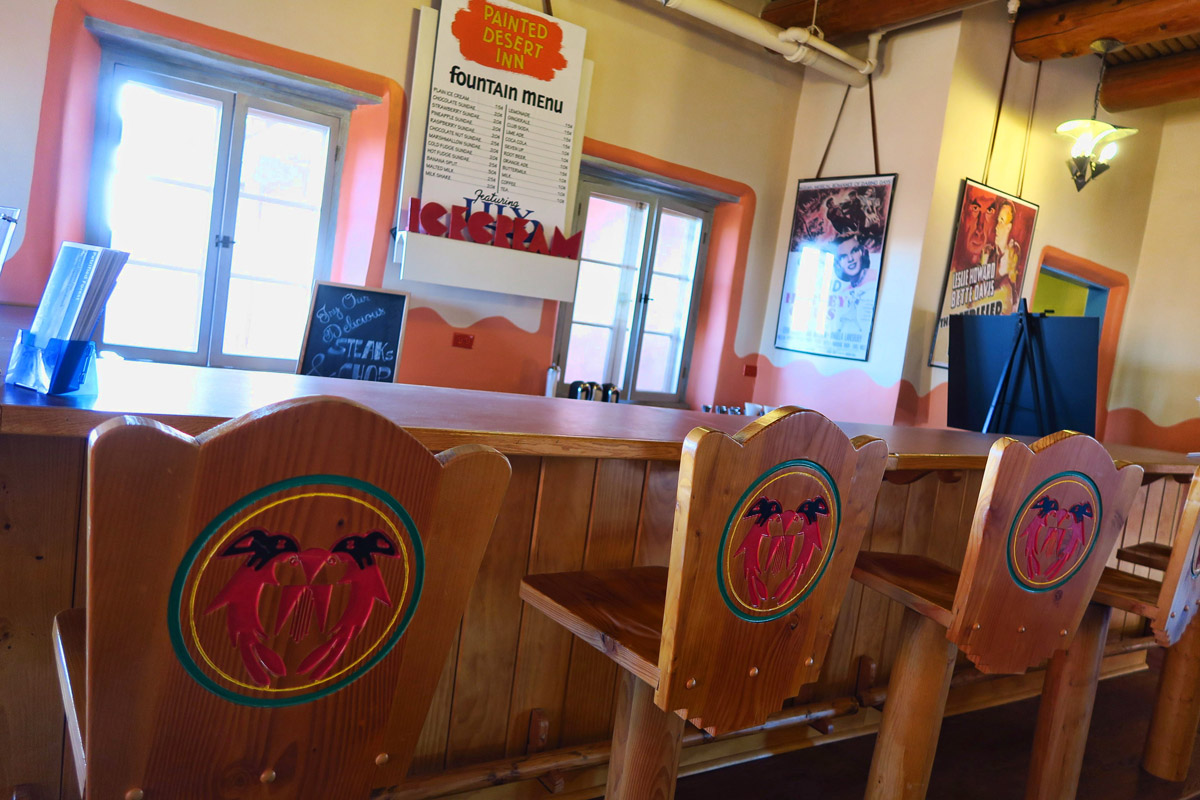 Decor inside the Inn was restored to original Native American art. 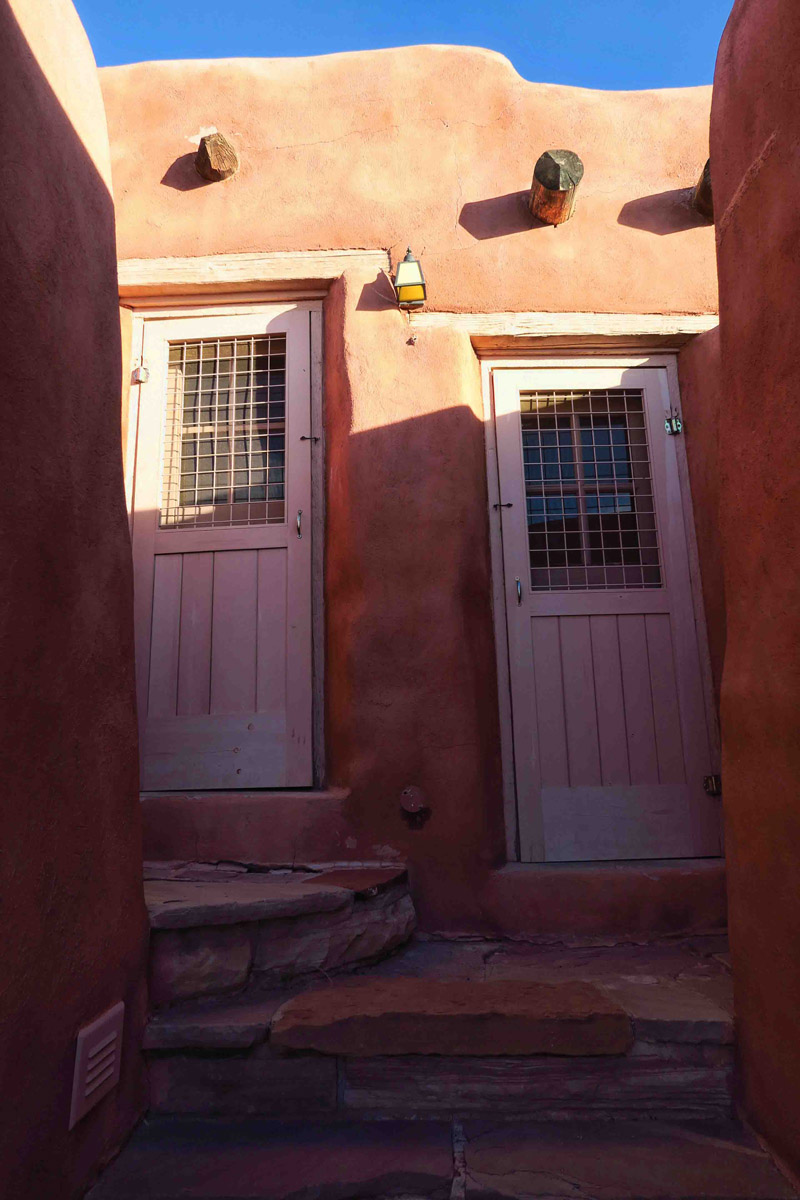 Since the Inn was so remote, it included small rooms for staff, known as “Harvey Girls,” named after Fred Harvey, entrepreneur and restaurateur who established hotels and restaurants along the Atchison, Topeka, & Santa Fe Railway, including the Grand Canyon.

The park has more than doubled in size since my childhood, with preservation efforts as recent as 2004 when then-President George Bush signed the bill doubling the boundaries protecting the park.  So whether we did or whether we didn’t, I can now count the Petrified Forest National Park “officially done.”  In this instance, having a bucket list as a task master proved fortuitous, otherwise I might have bypassed such a myriad of attractions in this national park along my southerly migration route.

9 thoughts on “If A Tree Falls in the Forest…”