So the “gringo” interpretation of the Dia de los Flores as I understand it is a bit of a double meaning, both modern and traditional.  The more modern version of the celebration takes place on the Thursday night before, when vendors gather selling Easter baskets and toys.  And of course the vendors assemble with their stands of flowers for sale.  This sale of flowers appears to bridge the modern with the traditional. 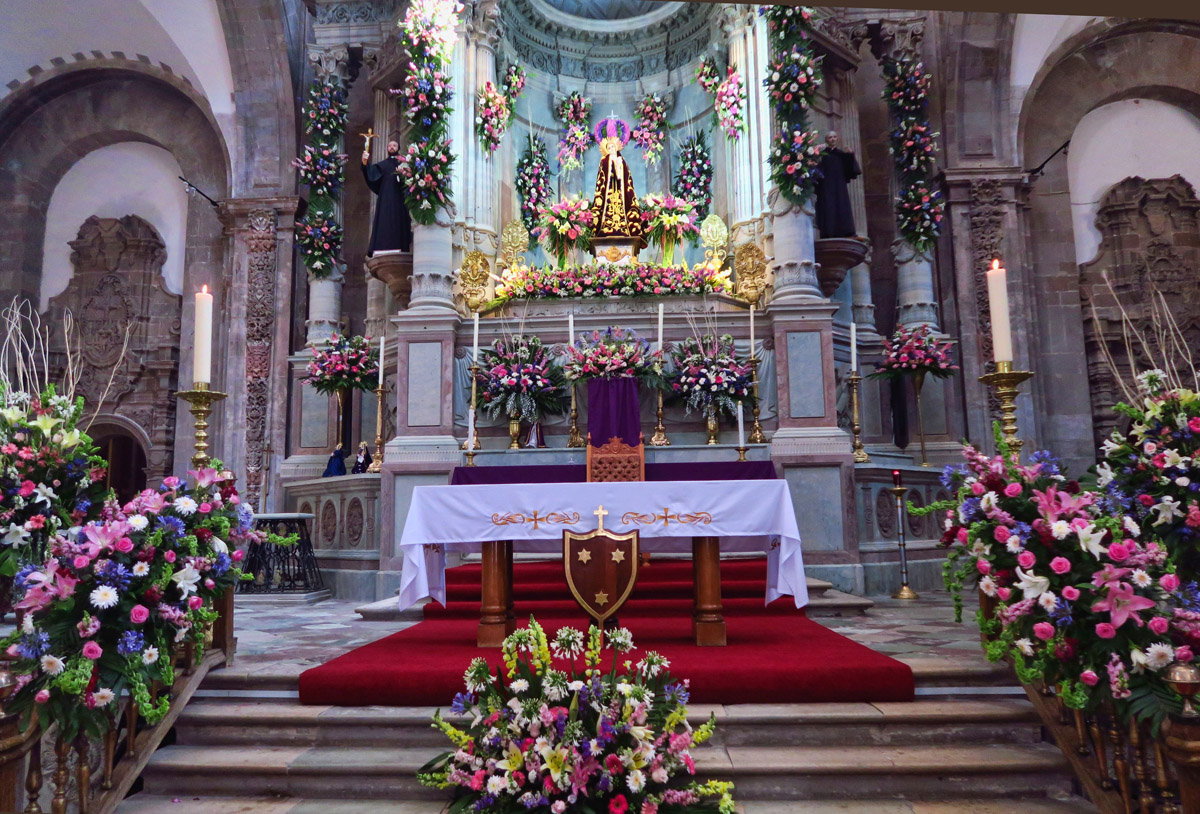 My mind is blown by the impressive array of flowers in the Templo de San Francisco. 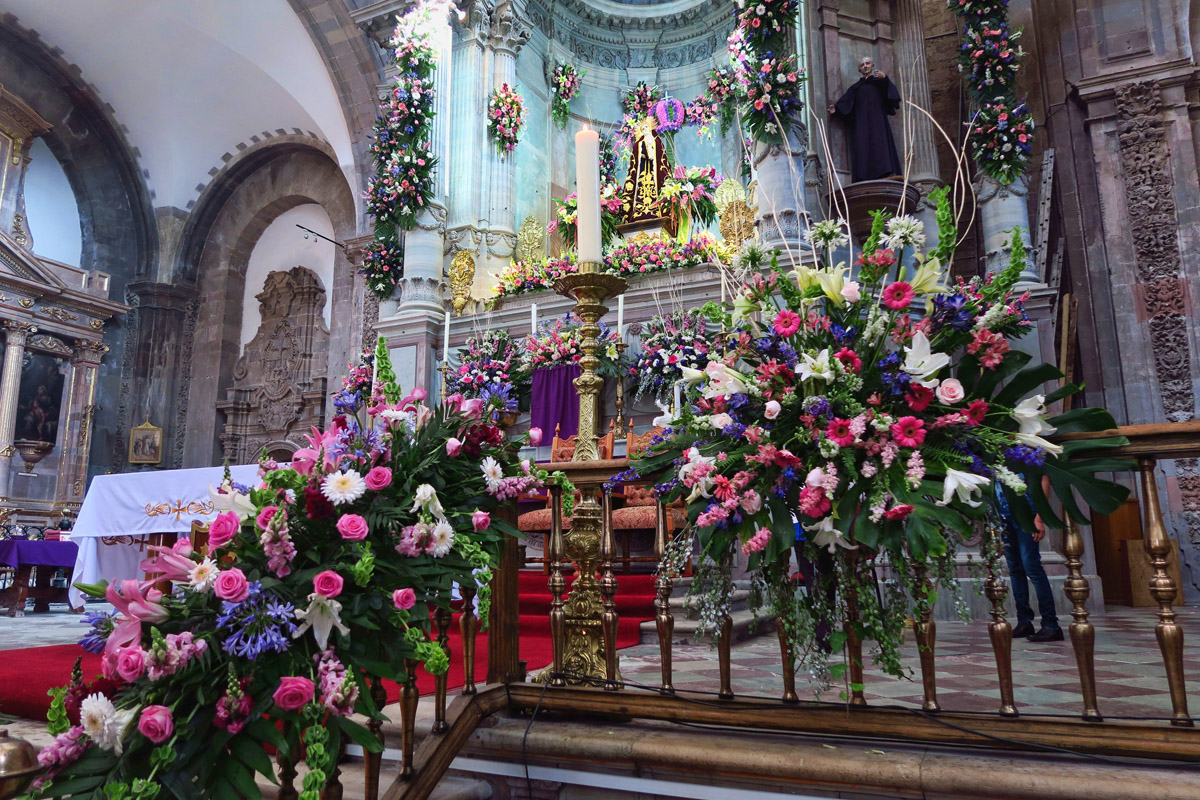 The blend of fragrances inside the Templo is intoxicating.

Guanajuato’s celebration includes a historic romantic angle as well, “Baile de las flores” or Dances with Flowers which carries on into the night.  Once the dances end, the young singles gather in the Jardin de Union.  There was a time when young men would walk in one direction, while the young women traveled in another, eyeing each other up as their paths crossed.   If there appeared to be mutual interest, then flowers were presented.   Sort of Mexico’s version of The Bachelor, i.e. “Will you accept this rose?”   While this tradition has faded over the years, the custom of giving flowers is still very much alive. 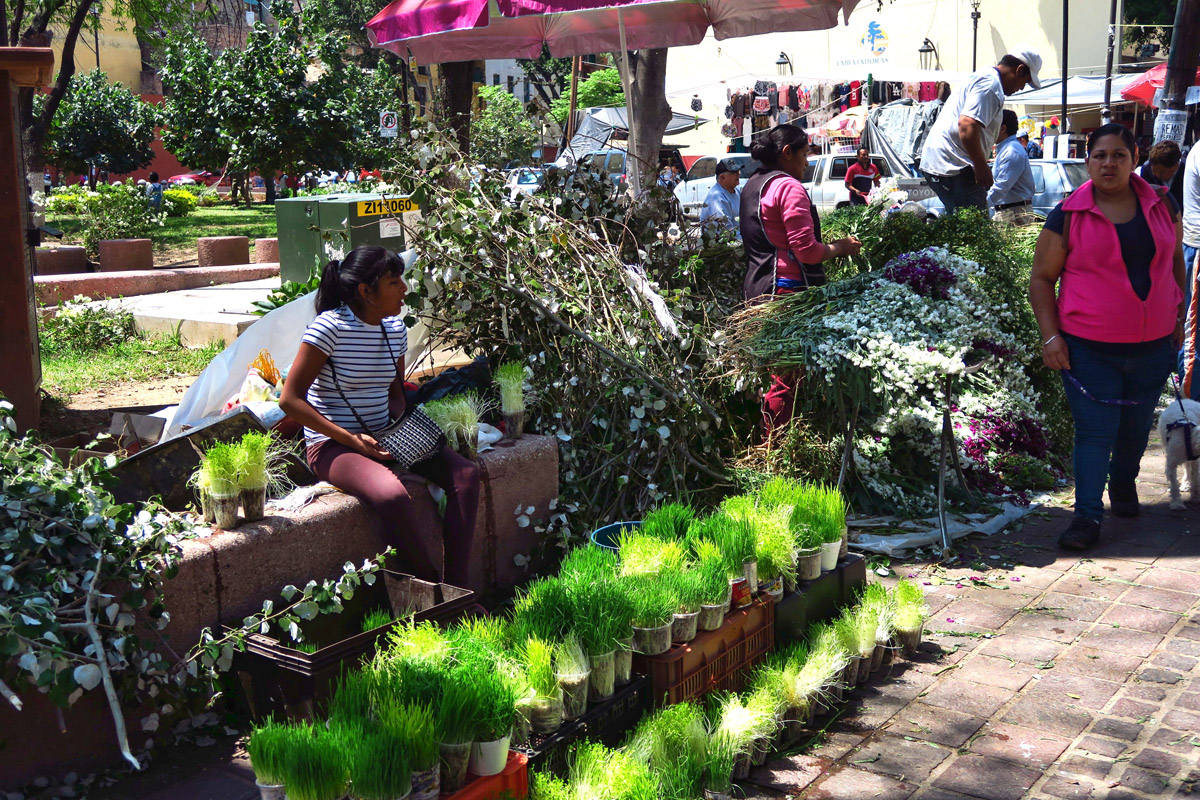 The Mexican people are great entrepreneurs. If sprouting wheat is required for the building of altars, dozens of vendors appear, selling wheat grass just on the verge of sprouting. 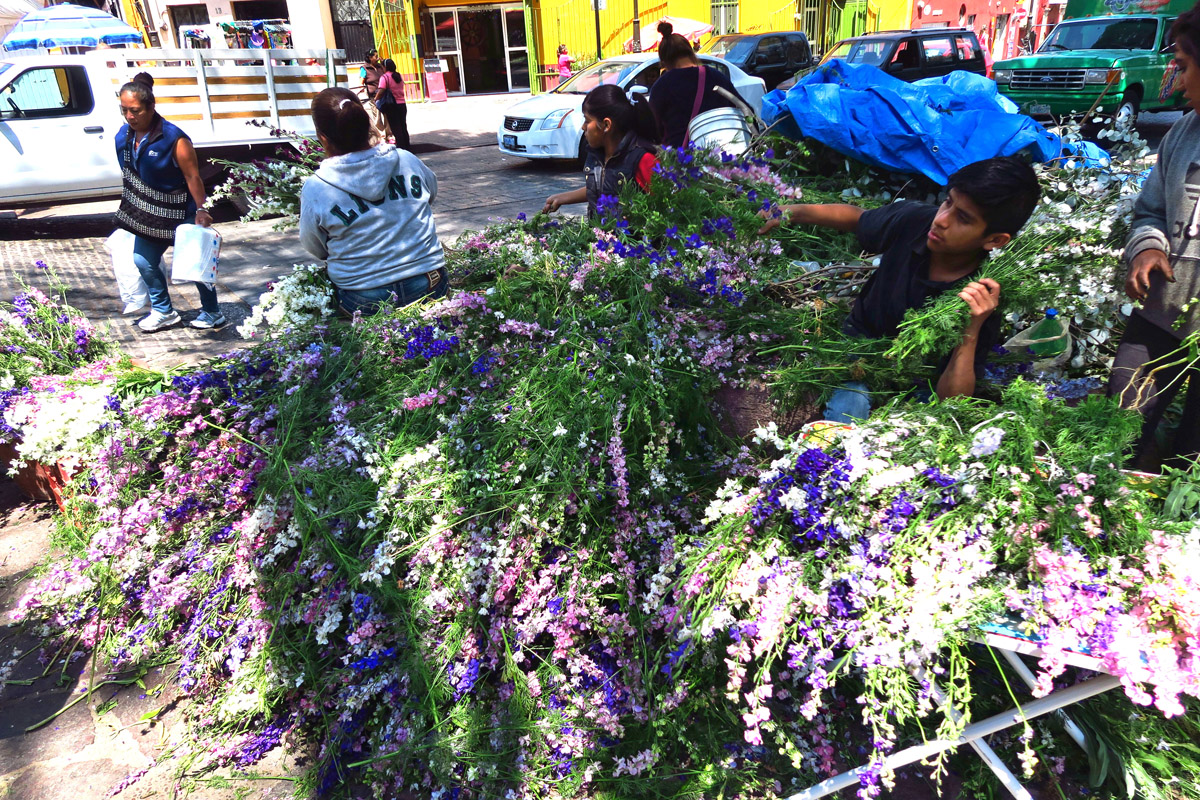 Piles of purple and white flowers have appeared in prep for the building of the altars. 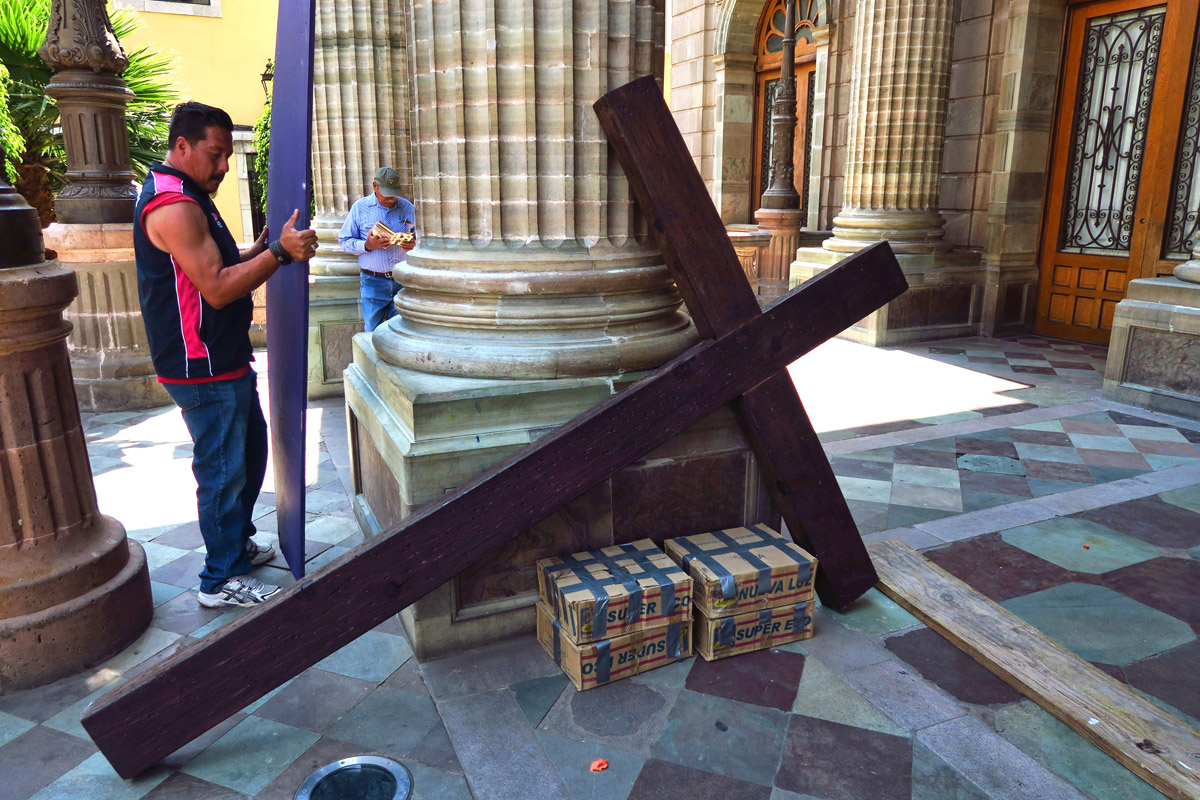 This “life-sized” cross will be the focal point for the main altar in town, on the steps of the Teatro Juarez. 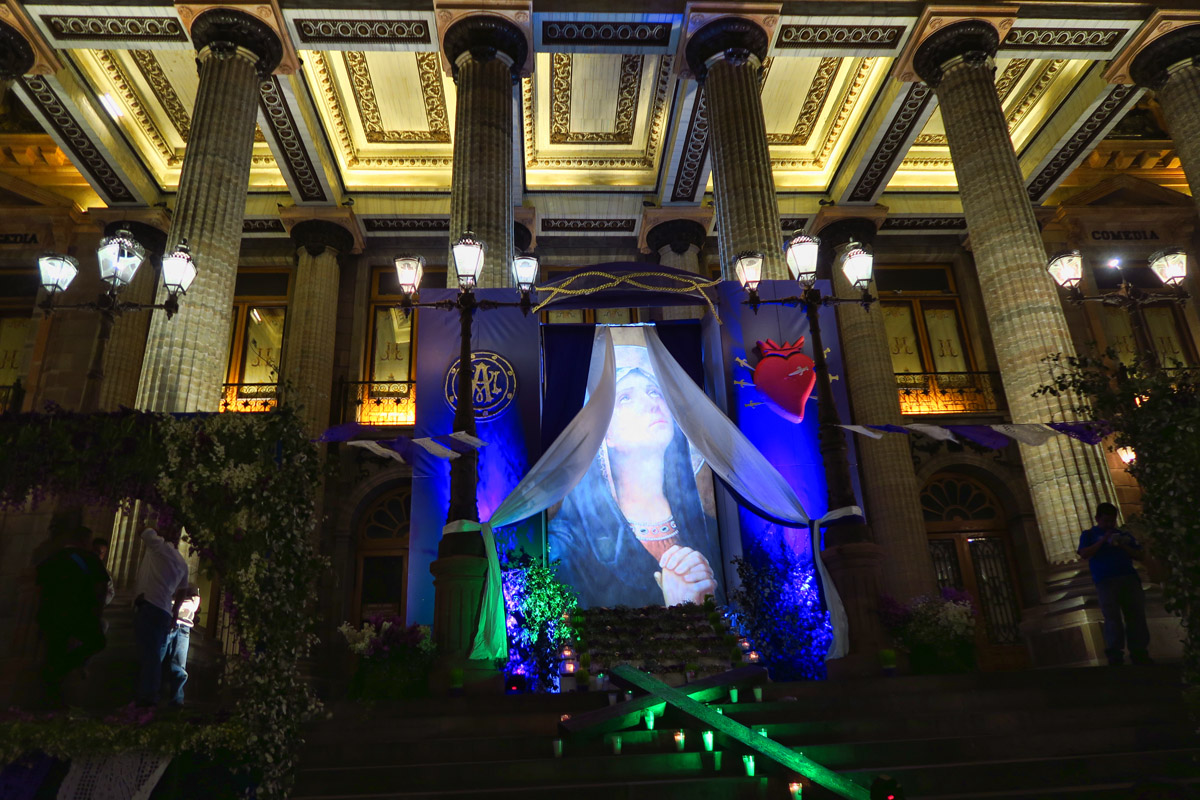 Here is the finished altar. The cross is laid at the foot of a giant poster of the Virgin of the Sorrows.

But come morning, things get serious as the tradition shifts to the more devout.   I get advice from a local to arrive early, for the women begin to gather the flowers in the early morning hours for the building of the altars to honor the Virgin de los Dolores.  I am out of bed and down the stairs by 8:30am…still late by the local’s standards.  Activities are already in full swing.

As someone who is not religious, the many “Virgins” of Catholicism have always been confusing to me.  But one of the things I enjoy most about travel is learning about other cultures.   And no other cultural aspect runs deeper in Mexico than their devotion to the Virgin Mary, often perceived to be more popular than Jesus himself.  For example, the image of the Virgin de Guadalupe graces every doorstep, every home, every business.   But how does she differ from the Virgin de los Dolores, who seems to take center stage during Easter?  Not knowing the difference, I asked… 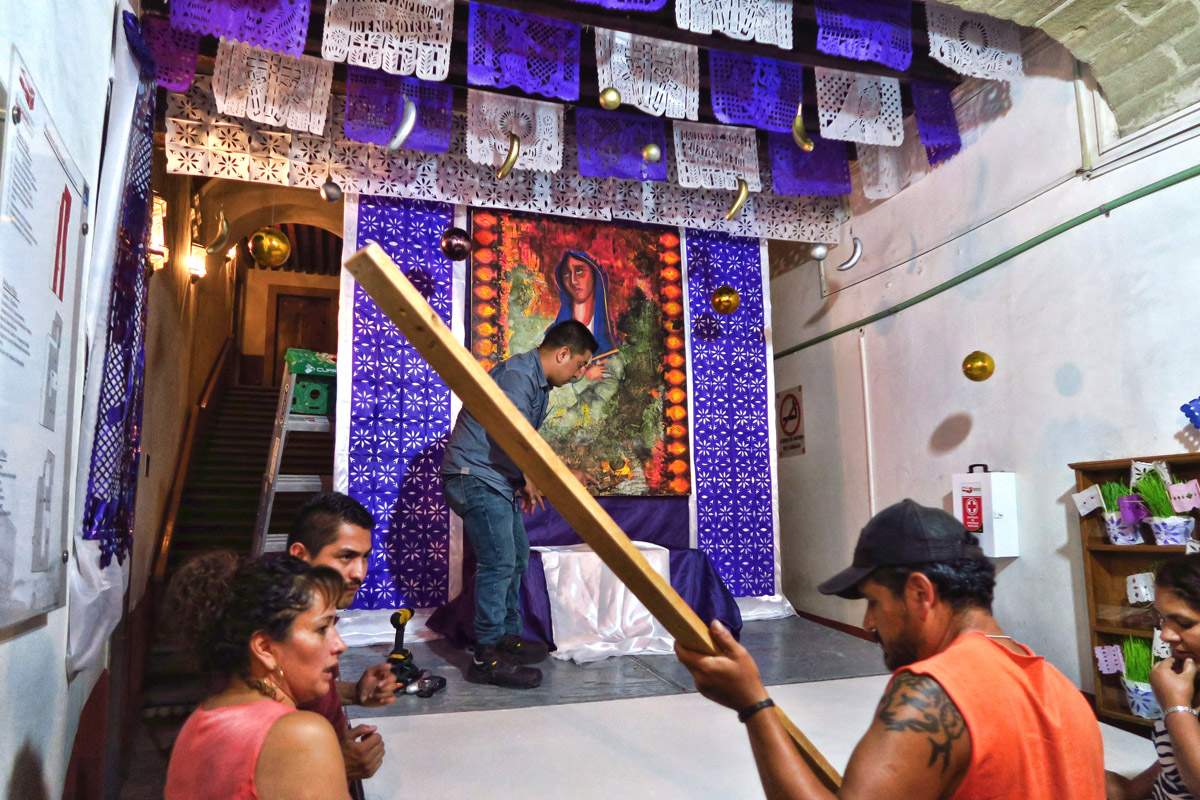 Another altar in the beginning stages of construction… 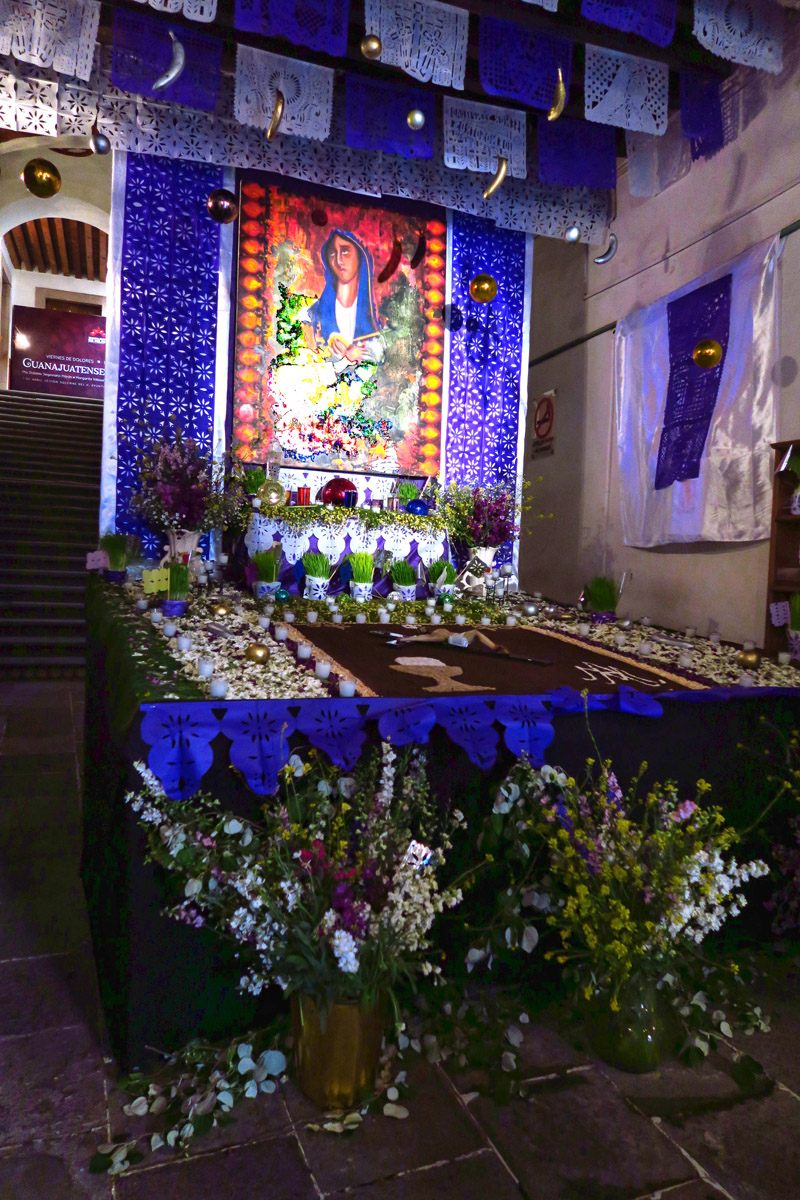 The finished product. Note the oranges spray-painted gold. The center image on the table is made from colored rice and grains.

As  I understand it, there are many “versions of the virgin,” but they are all the Virgin Mary, and differ depending on her state of being. For example, the ubiquitous Virgin de Guadalupe refers to a location near Mexico City called the Valle de Guadalupe, where the image of Mary was believed to be seen in on multiple occasions back in 1531, ergo her prominence in Mexico.

Virgin de los Dolores signifies the Virgin Mary in her sorrowful state, because she has learned of the impending crucifixion of her son.  For this reason, this festival has particular significance in Guanajuato.   The town was founded on the mining industry, which claimed the sacrifice of many “sons.”  Therefore, the Virgin de los Dolores has greater significance in Guanajuato than it might in other cities, as she is associated with the mothers of the miners.  The Spanish word “Dolores” translates to the plural of “sorrow.” 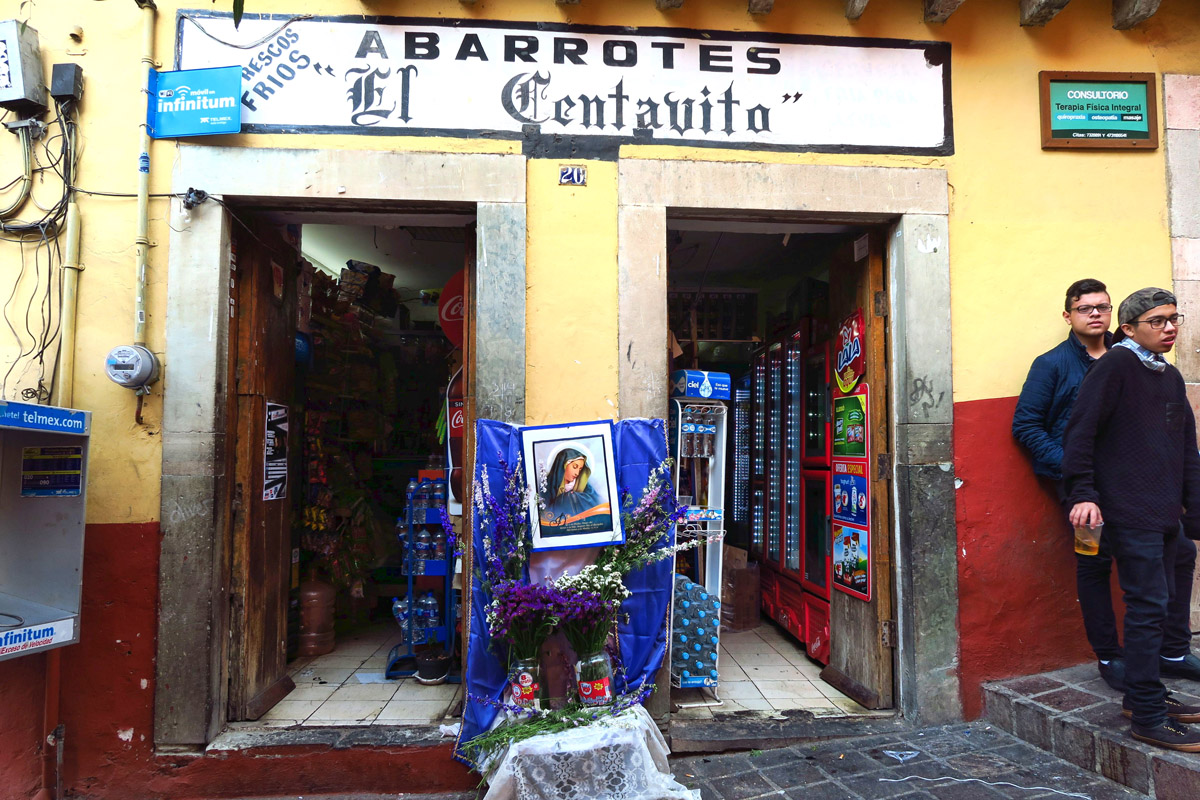 This is an example of one of the more modest altars around town, outside a small market in Plaza Baratillo. 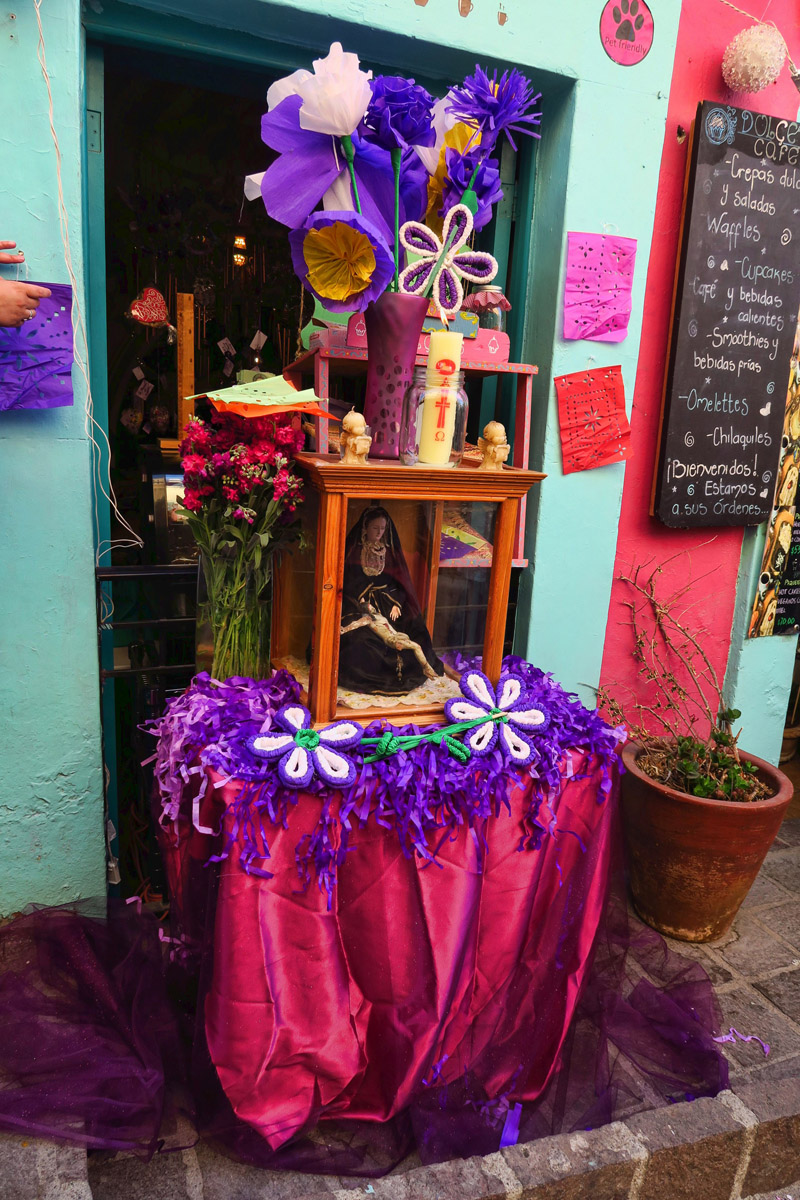 Another smaller altar outside an ice cream shop. 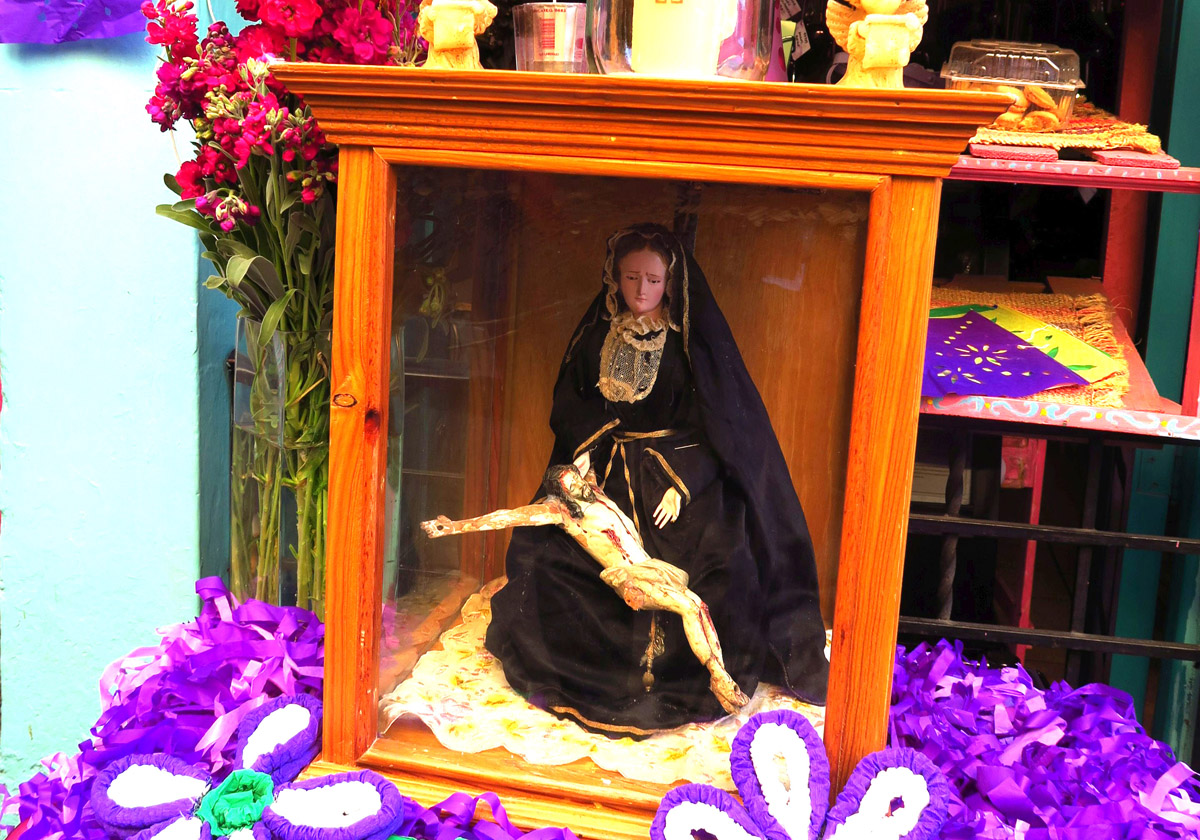 Note the close-up of the detailed tiny figures inside the wooden box. 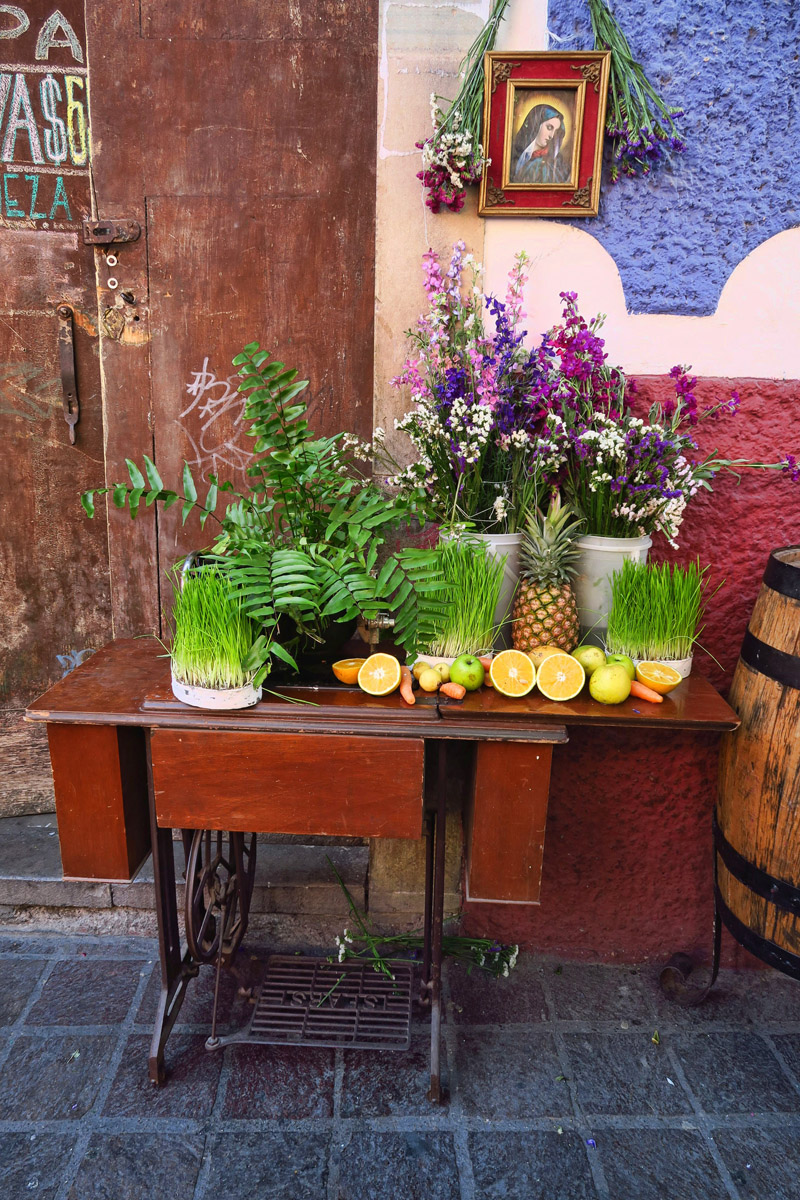 This was one of my favorites, outside a Juice Bar. A simple display of few pieces of fruit and sprouting wheat set on top of an antique sewing machine. 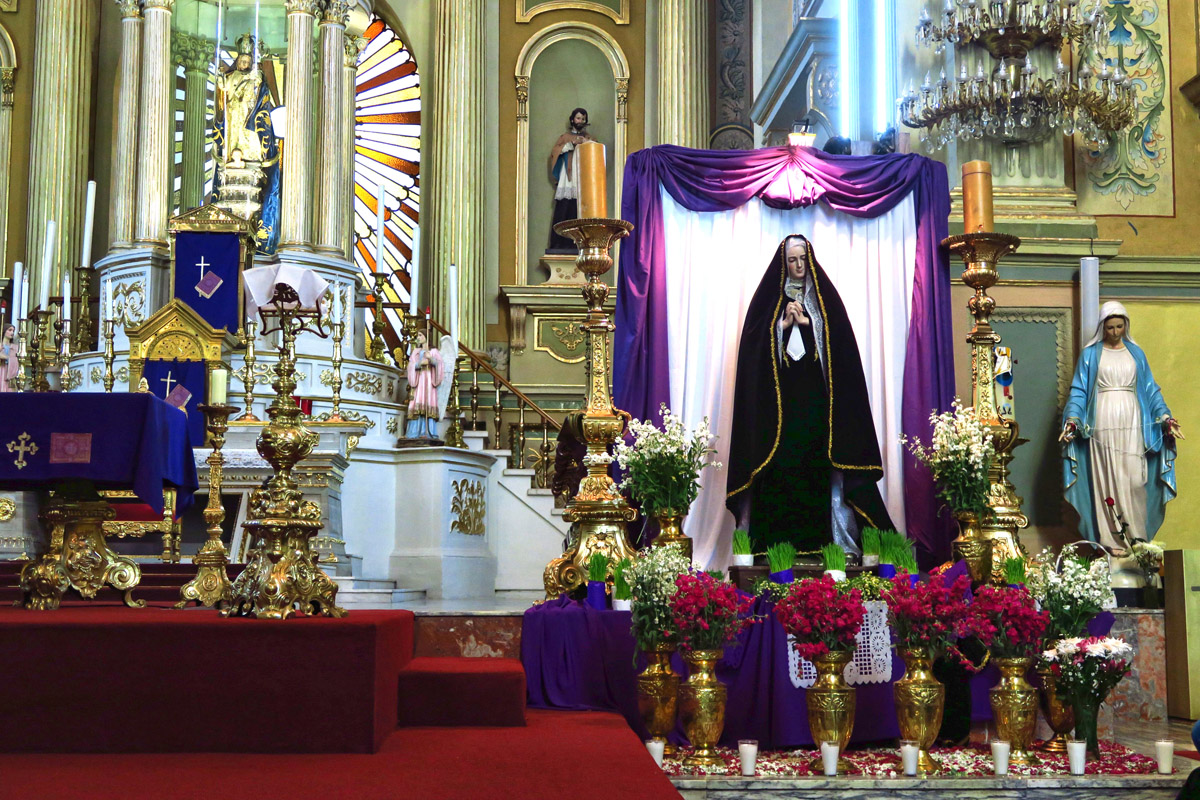 This was probably the most elaborate altar I saw, in one of the churches. 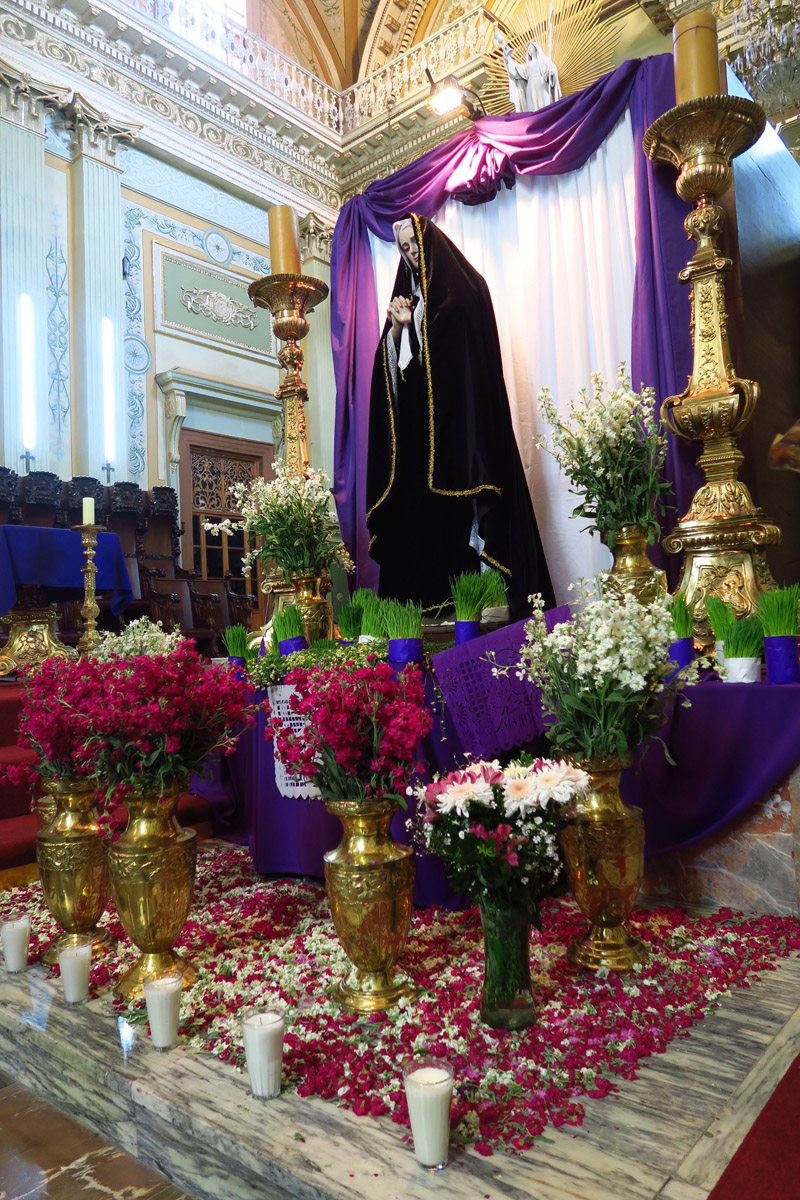 Even the floor of the altar is covered in flower pedals.

So the erecting of altars to the Virgin of the Sorrows is a big deal in Guanajuato.  In fact, there are six cash prizes for the best altar, ranging from 1,500 Pesos (about $75) for Sixth Place, all the way up to 4,000 Pesos ($200) for First Place.   This is a good deal of prize money in Mexico, and can more than make up for the materials invested.

Each item on the altar has some significance.   The altars are covered in flowers of purple and white.  A statue of Mary is cloaked in purple for sorrow, with the back drop draped in white cloth to signify purity.  Bitter oranges represent “sorrow” while spray painted gold to signify the resurrection.   Pots of sprouting wheat represent the Eucharist. 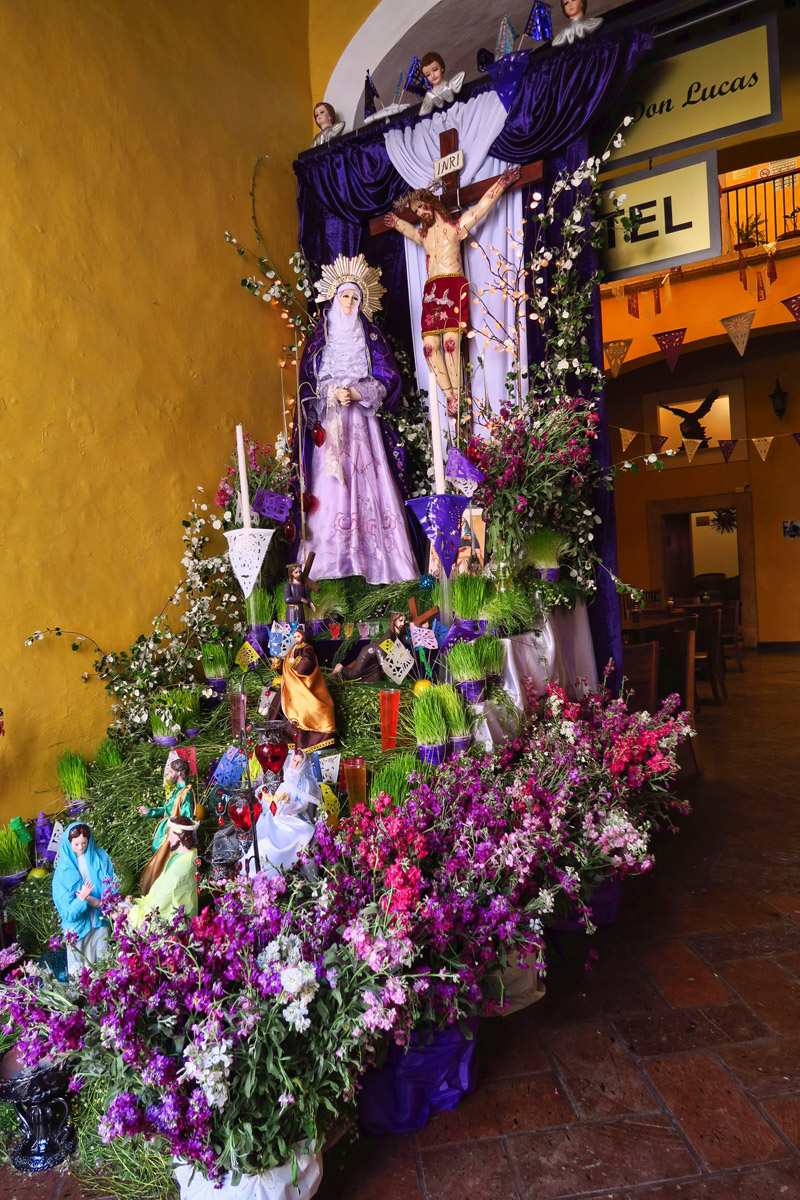 This altar was in a hotel lobby near the entrance. 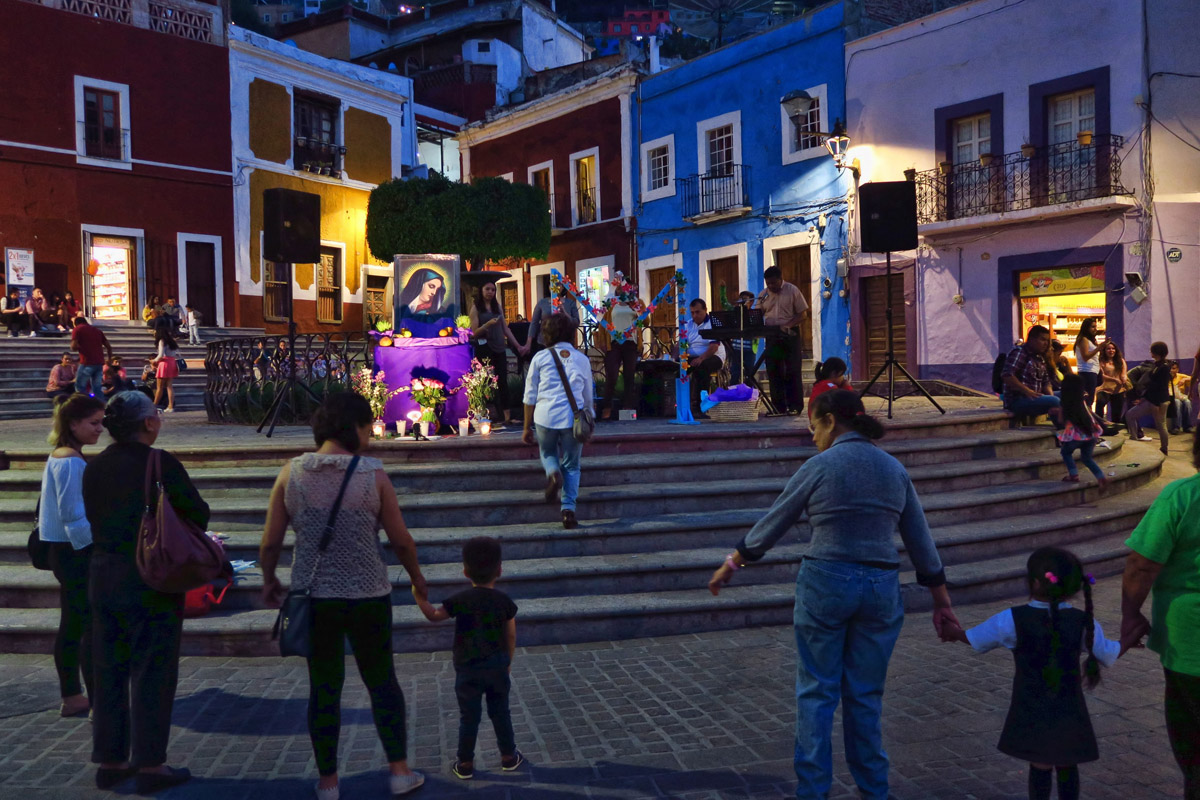 A small, but well attended altar in a popular corner. 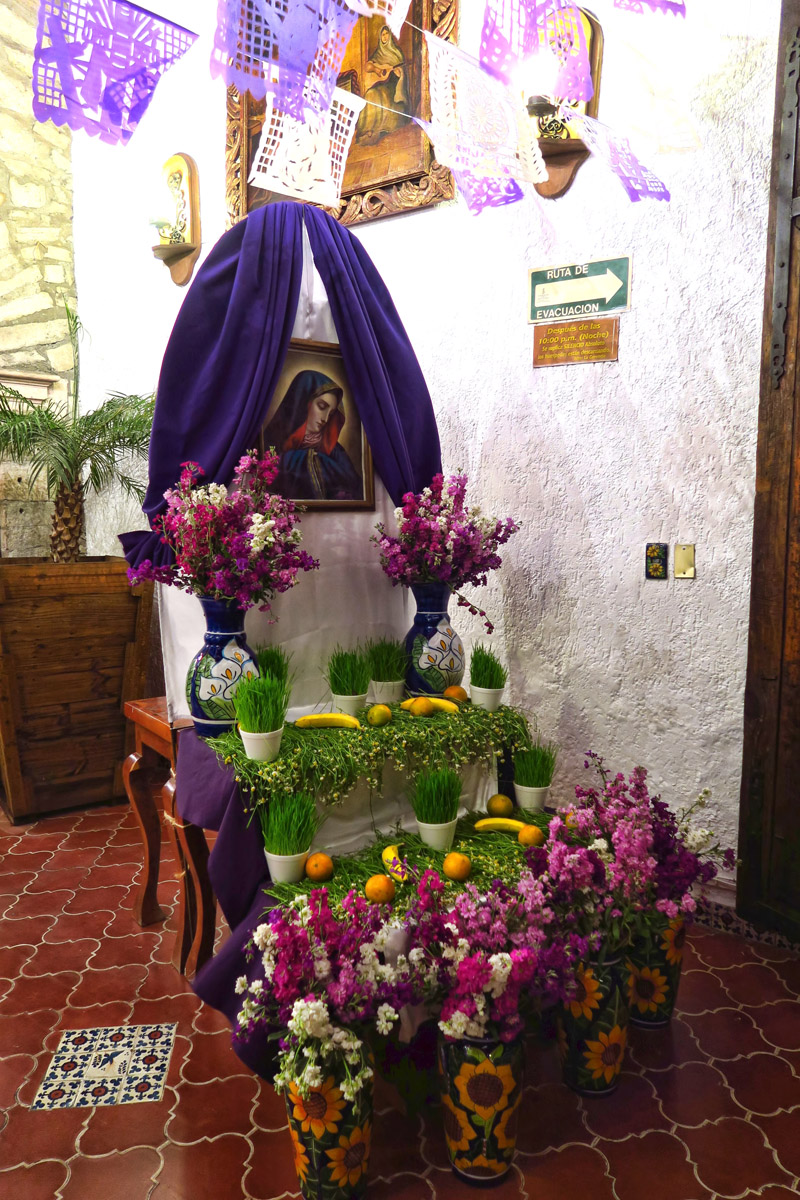 These altars range from the smallest with nothing more than a picture of the Virgin and a few pieces of fruit, up to multi-tiered, elaborately decorated platforms.  Interestingly enough, aside from the main altar in town and those in the churches, the two most elaborate creations I saw were inside private homes, both of my landlady, and the home behind the tiny “tienda” or market a few steps from my front door.  This tienda is smaller than most closets by US standards, yet with great pride, they invited me in their home for refreshments to show off their altar gracing an entire alcove in their modest home. Bestowed with flowers, fruit, the picture of the virgin framed with flowers and purple and white crepe paper, it was an impressive testament to living their faith. 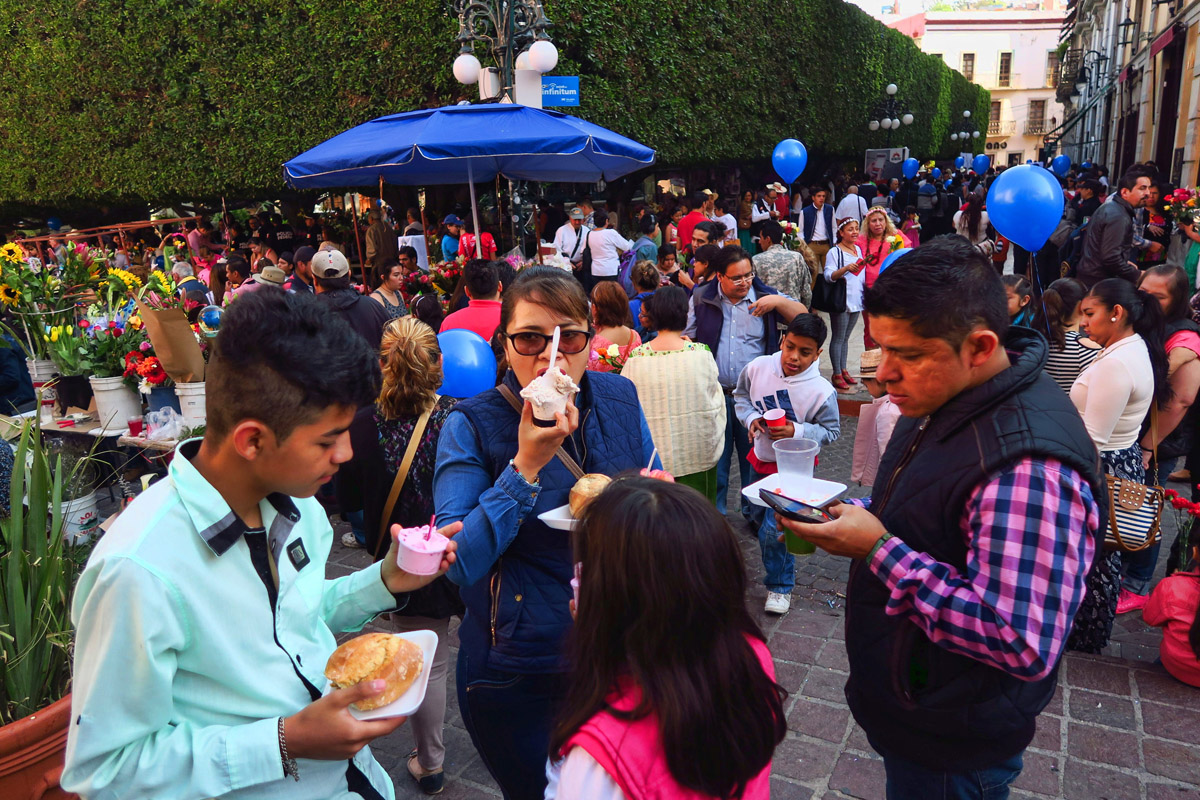 The Jardin de Union or main square is teaming with activity in the early morning hours. It’s odd to see people eating ice cream so early in the morning! 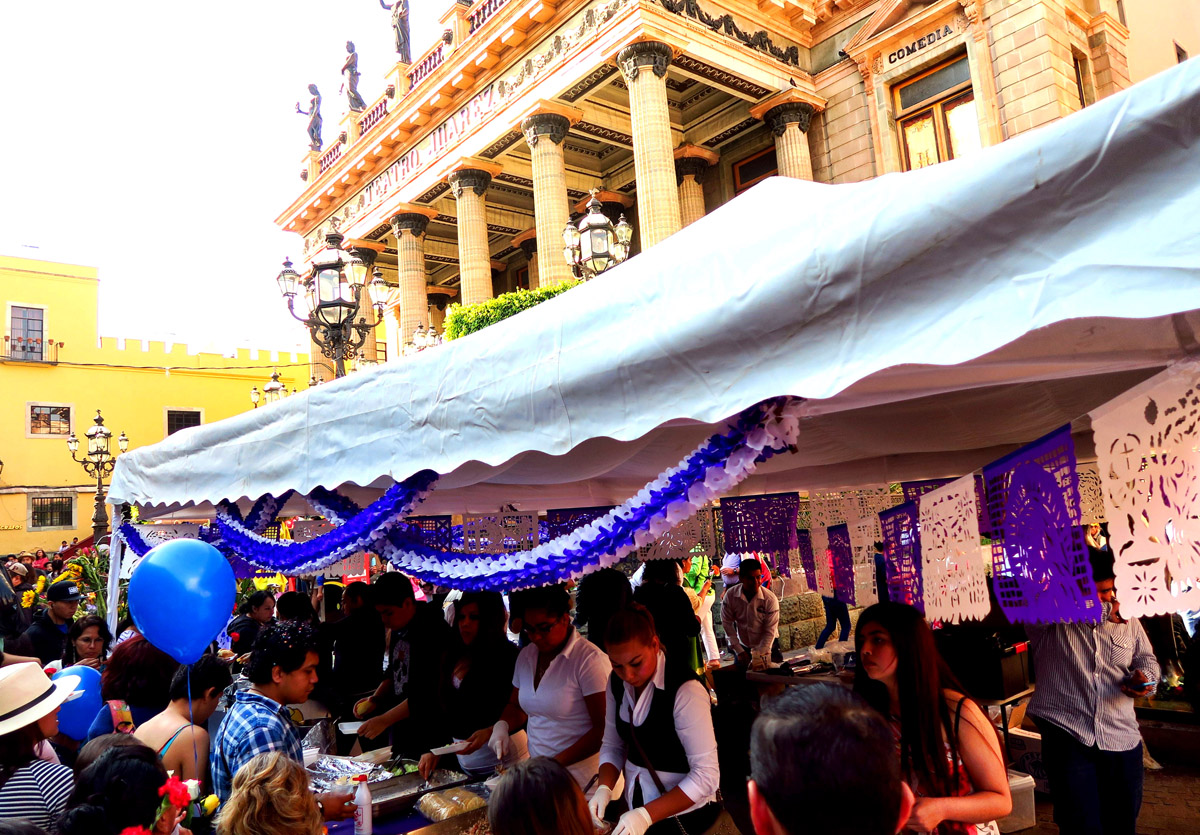 This giant tent in the main square is serving free breakfast. 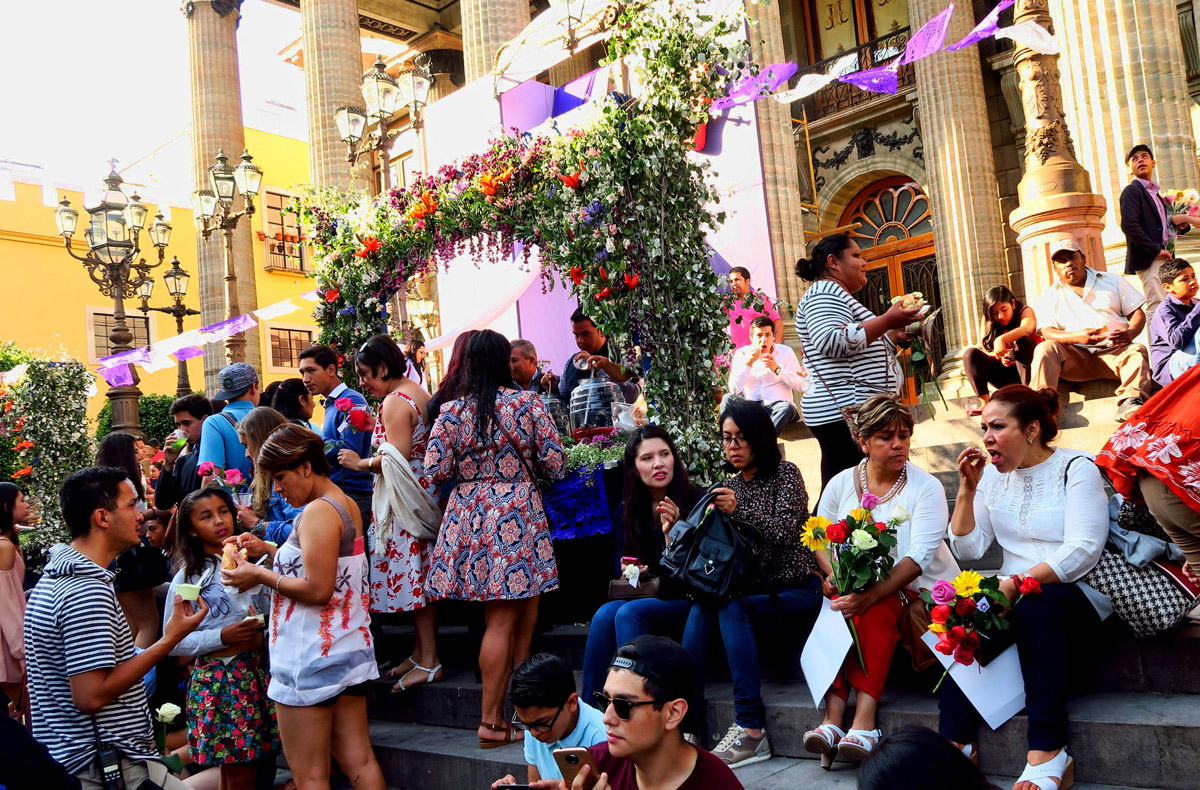 One of the many stands giving out free aqua frescas, or fruit-flavored water. 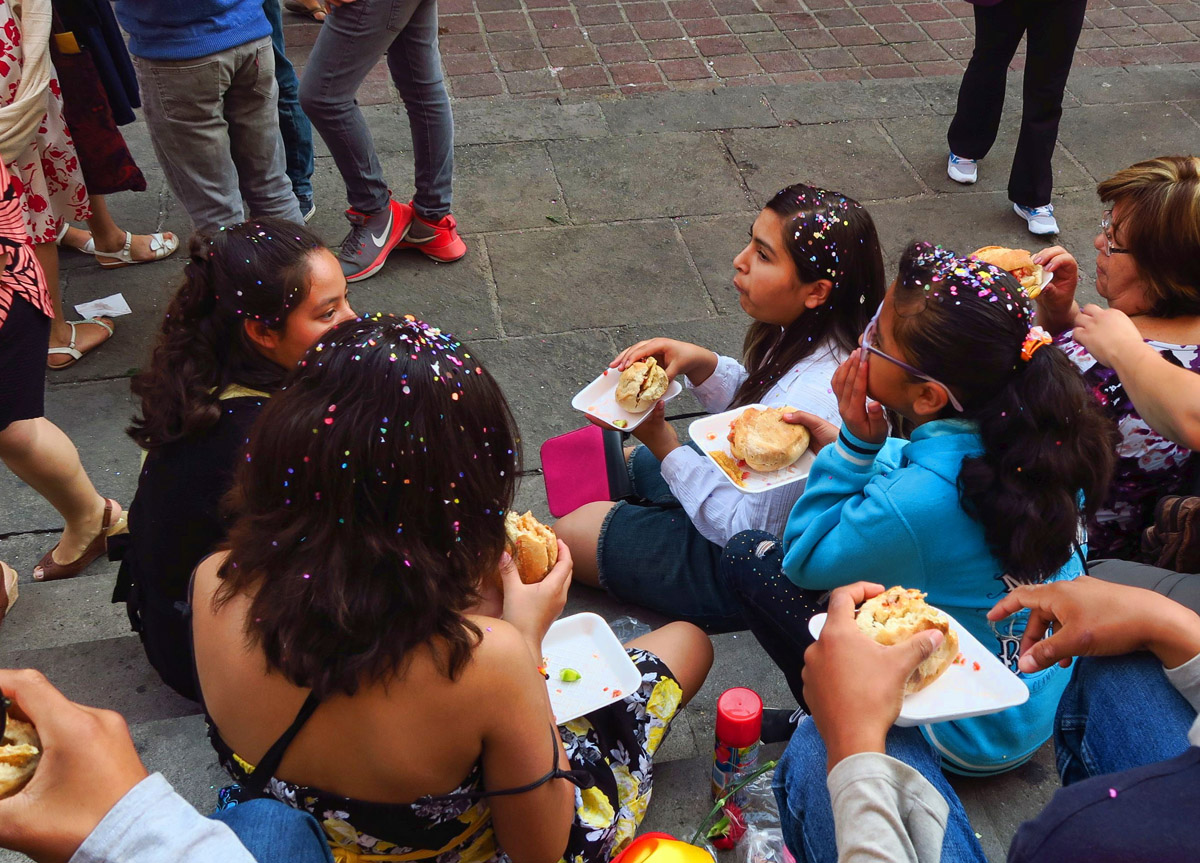 Confetti in the hair, evidence of an Easter egg in action… 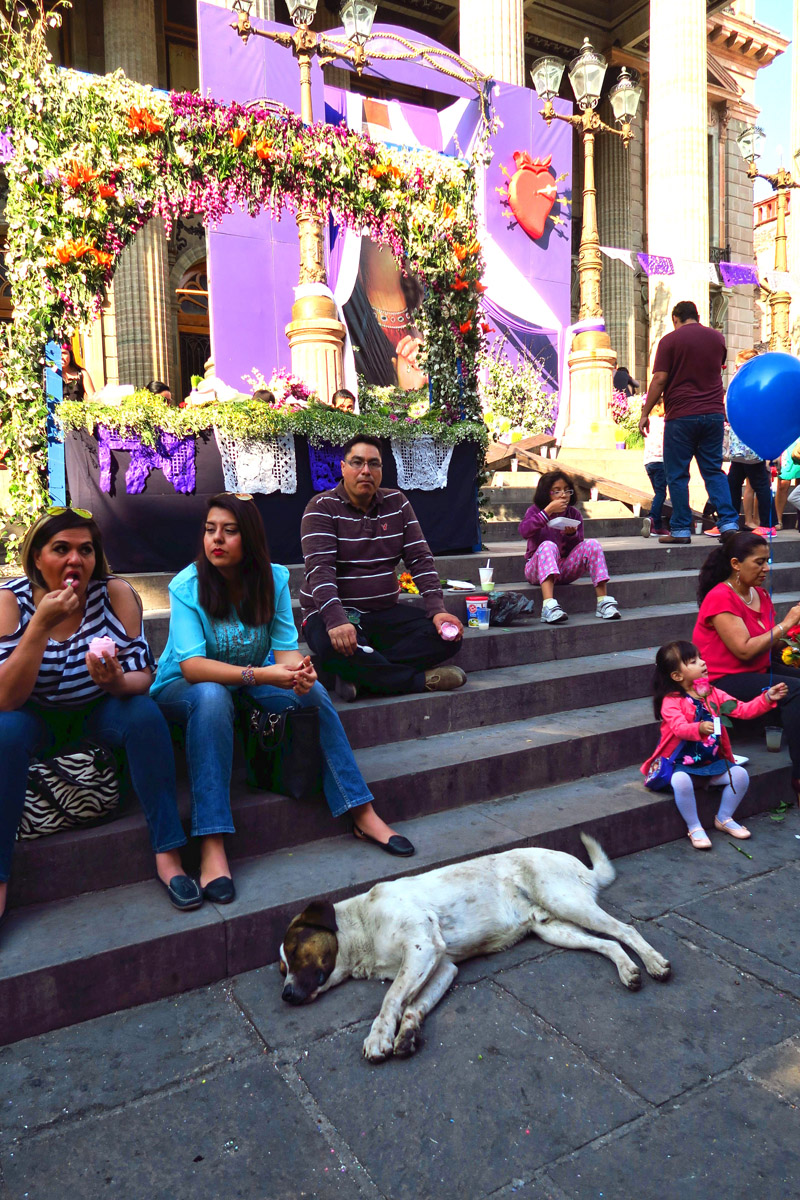 I love how this dog is taking it all in stride. 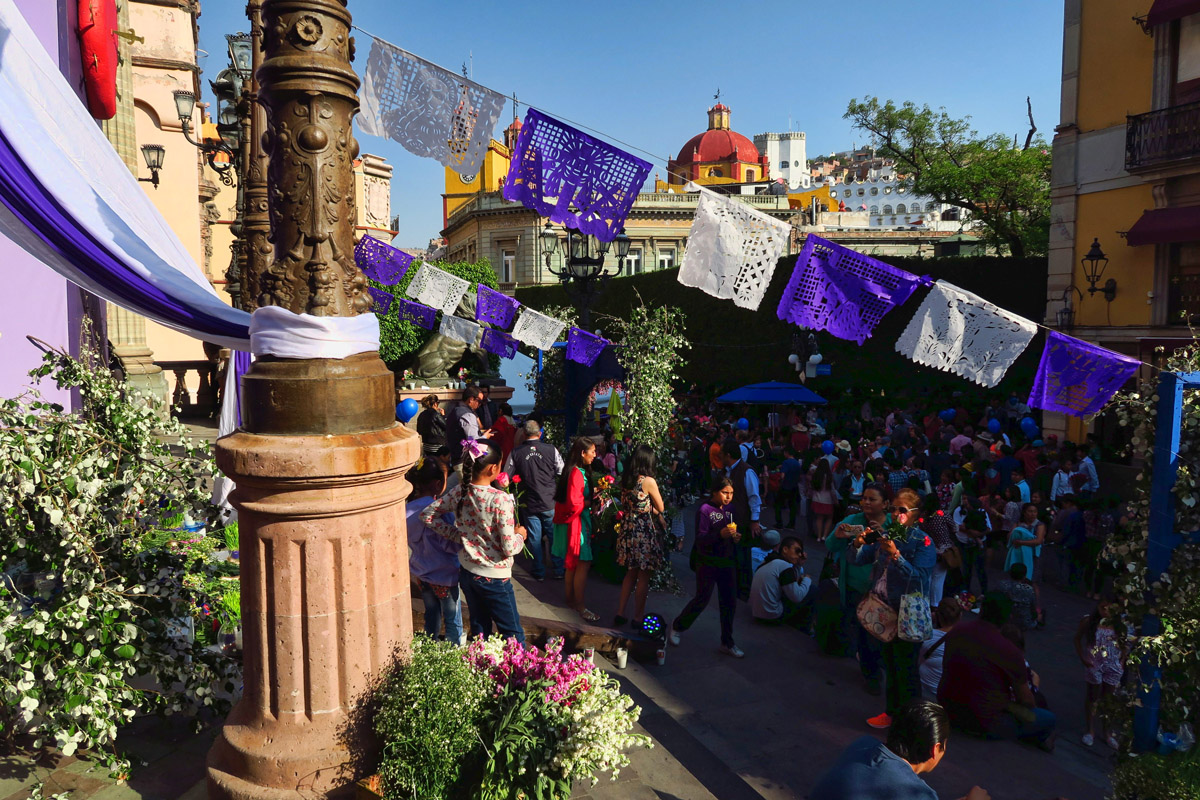 Since the party has been going on all night, a hearty breakfast also plays into the tradition.  In fact, there is a giant tent outside Teatro Juarez serving free breakfast to the masses.   A fancy buffet and decorative tables are set in the outdoor restaurants in the Jardin for government officials who apparently sponsor a lot of the freebies.

The one tradition I’ve not been able to “translate” is the giving of ice cream, shaved ice, and flavored waters.   I understand it is to signify the tears of Mary, but in the form of “snow?”  Why snow??   I have yet to find the answer to this question.  However, that doesn’t stop me from partaking in the free ice cream being dipped out on all corners of the Jardin.   There are frozen popsicles, hand-shaved flavored ice, and hand cranked ice cream in a multitude of flavors.  No boring vanilla here, as the flavors include tropical fruits, nuts, and a rainbow of colored ices. 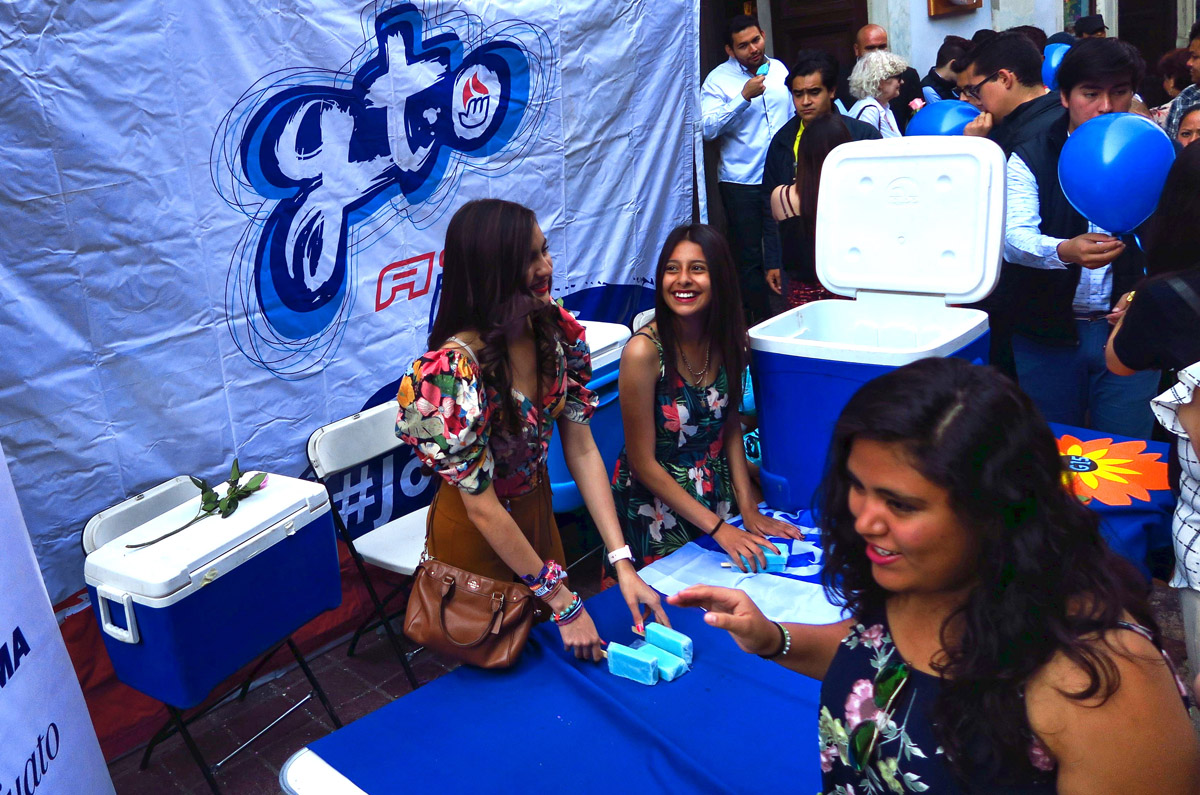 This booth appears to be sponsored by the local officials. The young girls are handing out blue popsicles. 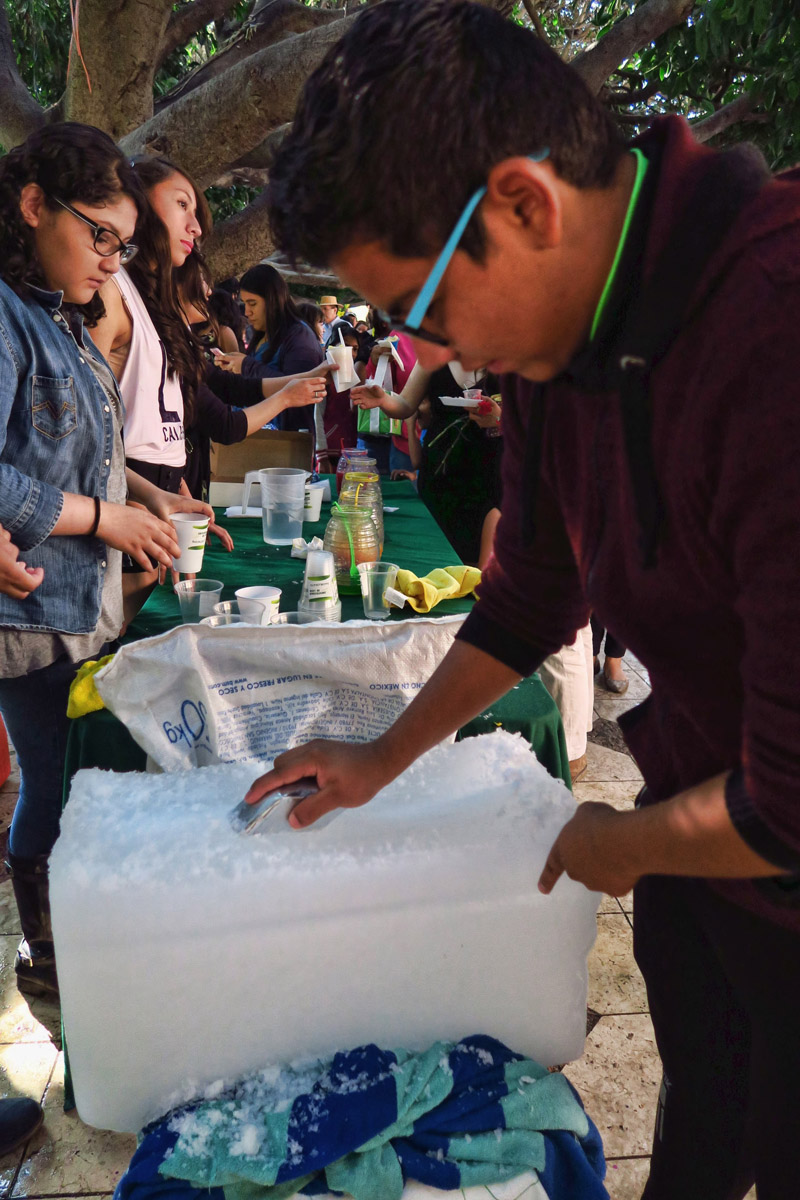 These young students are making “shaved ice” by sliding a sharp instrument across a block of ice. Slow process, but still people wait in line. 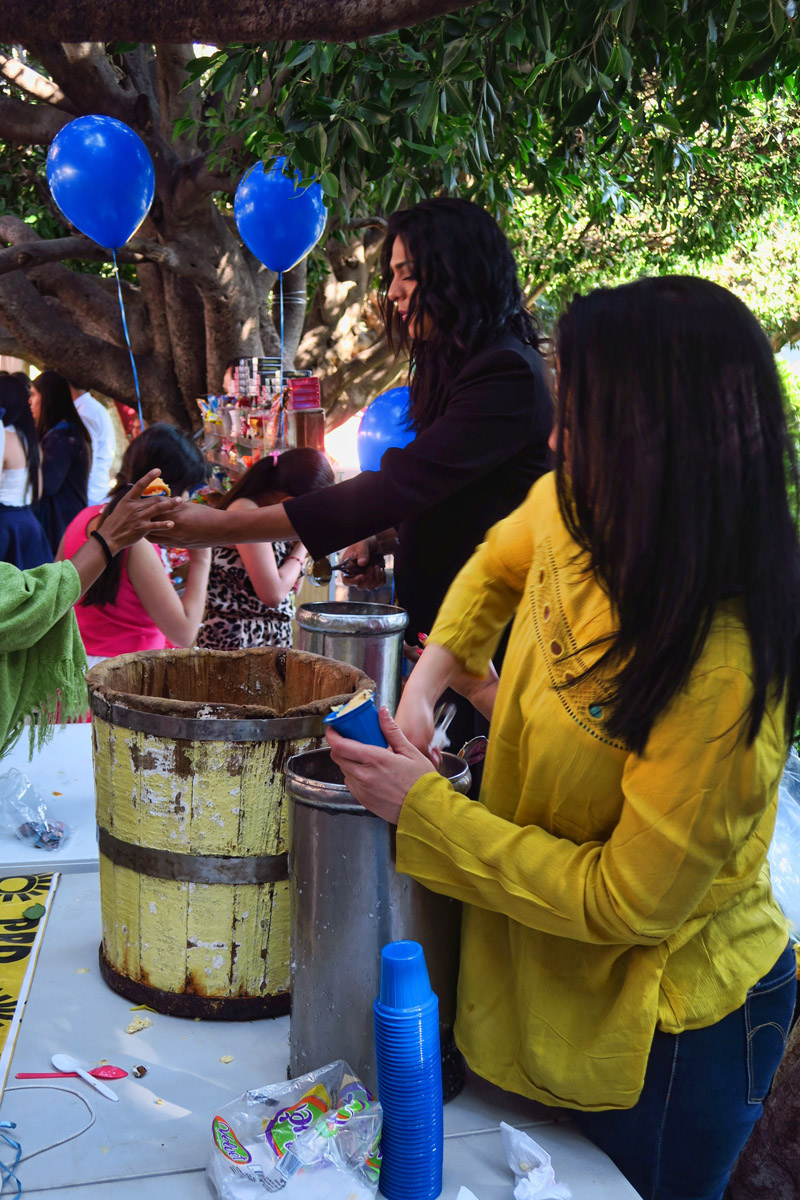 This was the best ice cream on the square. I wish I could have understood the name. It was filled with fruits and nuts, like nothing I’ve had before. 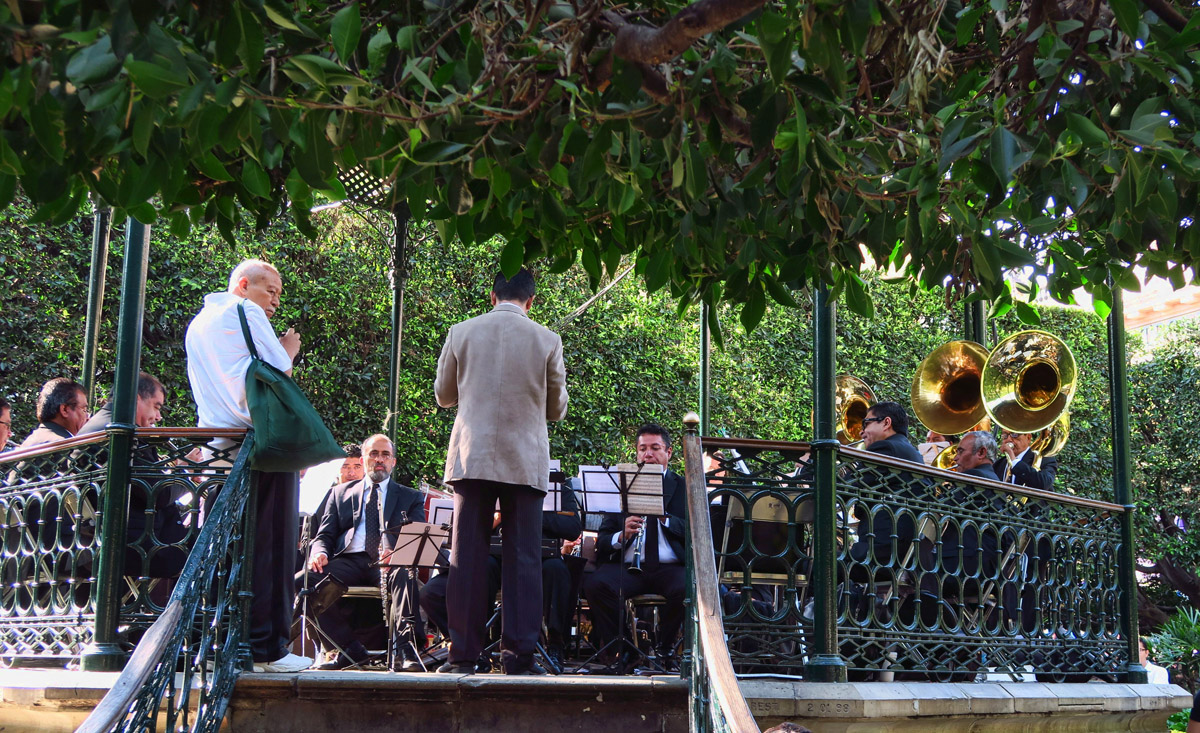 Meanwhile, as ice cream, ices, and flavored water is handed out, the band plays on…

By noon, the altar offerings of free ice cream and agua frescas, or fruit-flavored waters are closing up shop.   The flower stands remain a while longer.   But I think the most impressive part of the entire festival is the fact that a mere 24 hours later, with great efficiency and expediency, the altars are disassembled and the streets are swept clean without a trace of the festival remaining.  Just like a night blooming flower that only makes its appearance once a year, then withers away without a trace, it’s as if this biggest of festivals in Guanajuato, Dia de los Flores, never happened…