Aside from the week leading up to Christmas, there is no greater celebration in Mexico than that of “Semana Santa,” Holy Week.  Only it is now more like “Dos Semanas Santos” as it spans almost two full weeks with the lead-up in preparation and festivities being almost as exciting as the Holy Week itself. 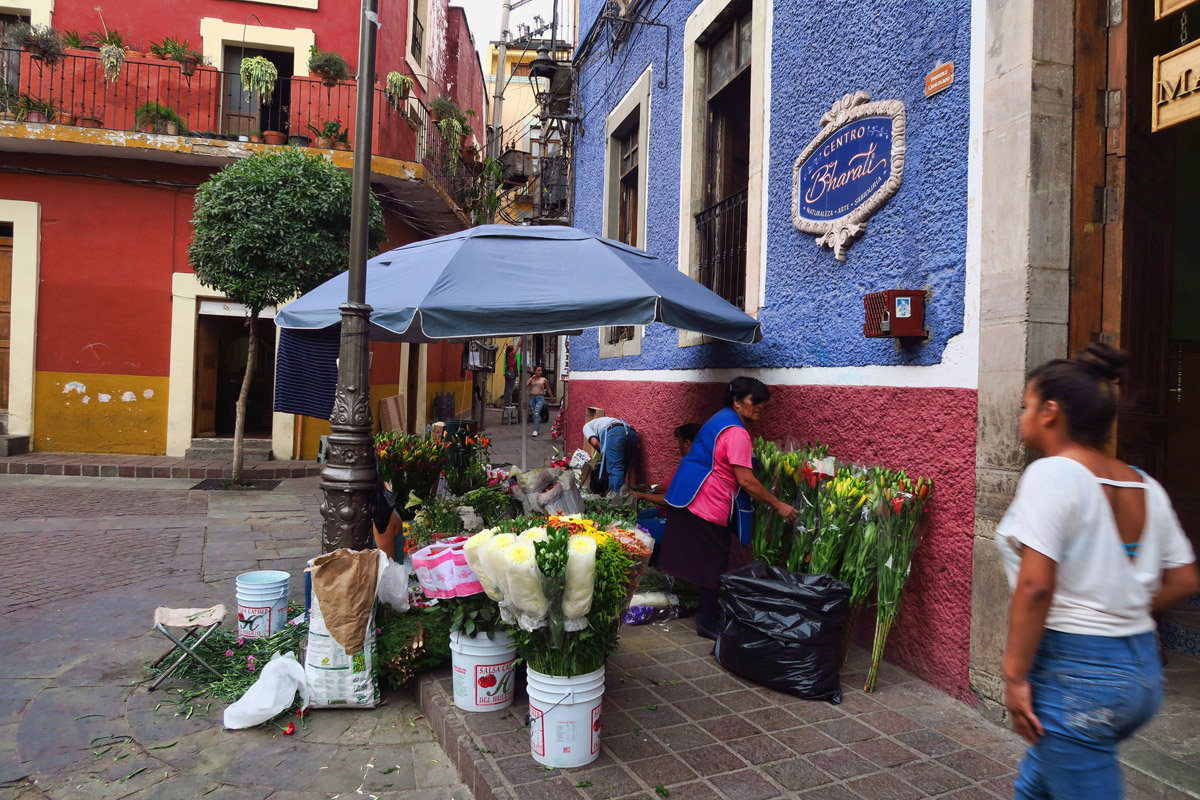 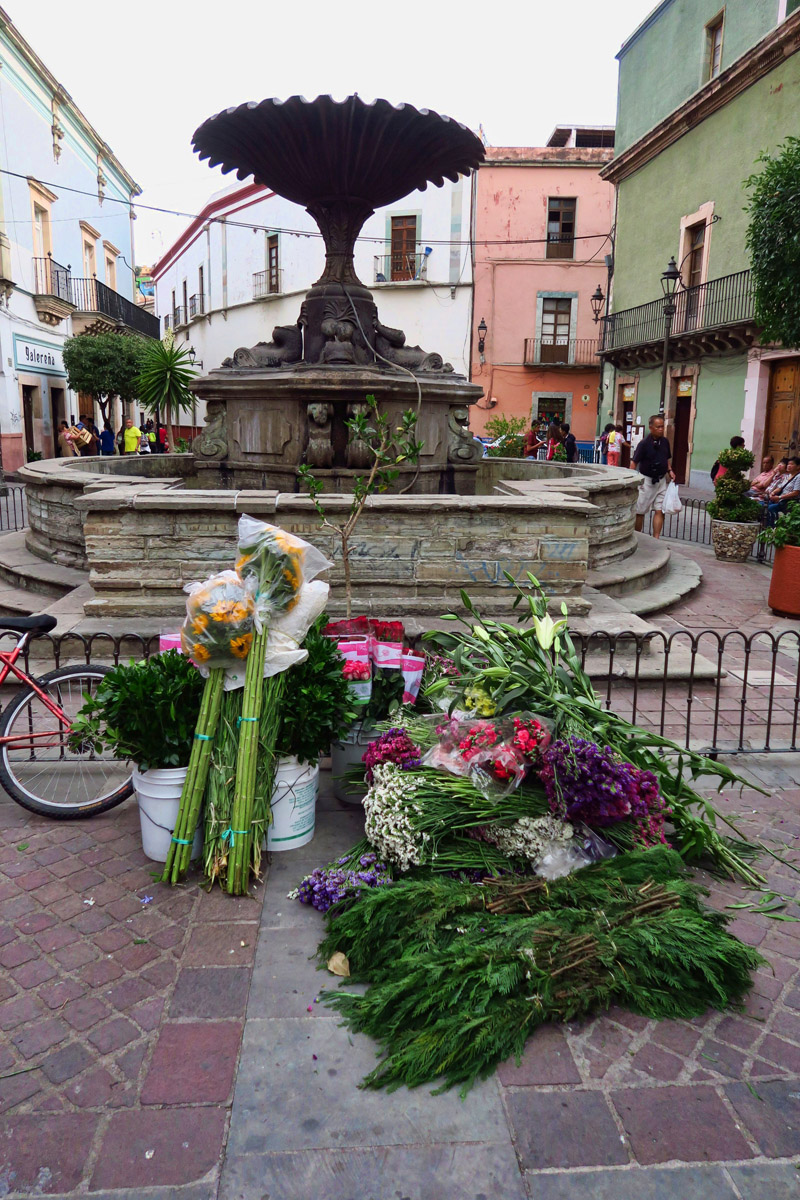 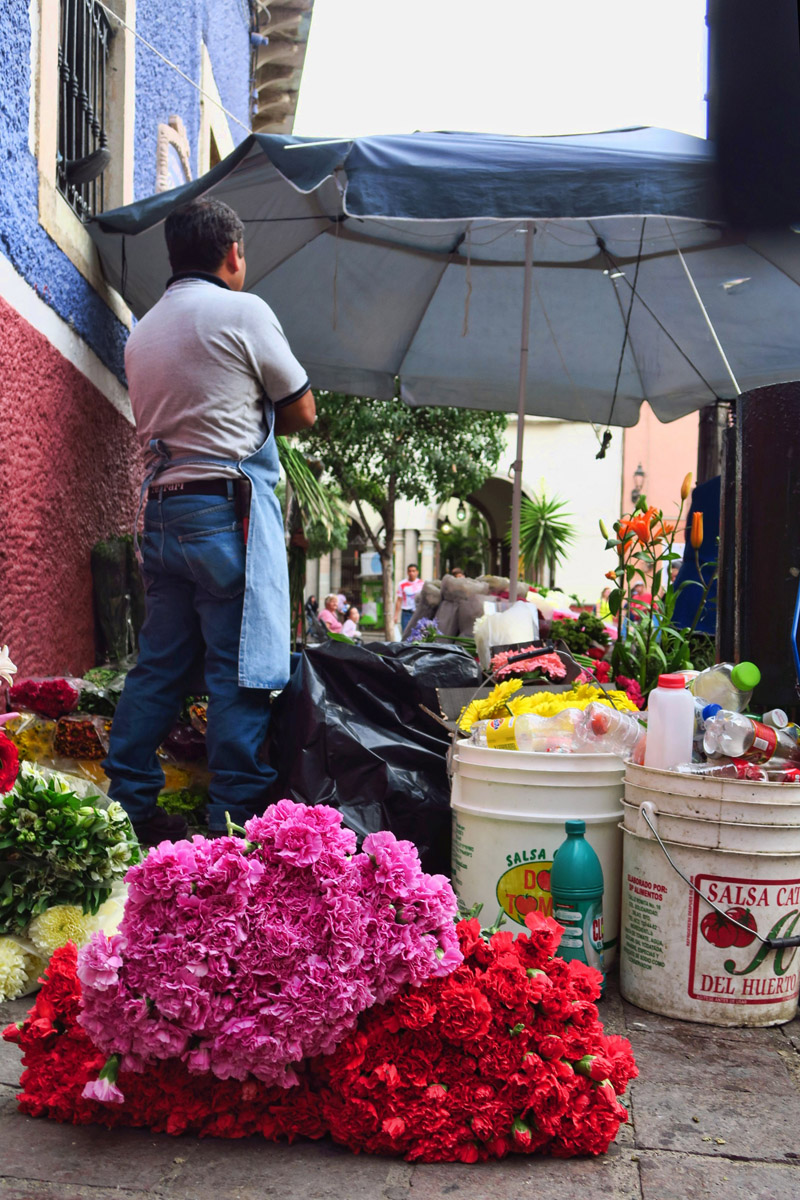 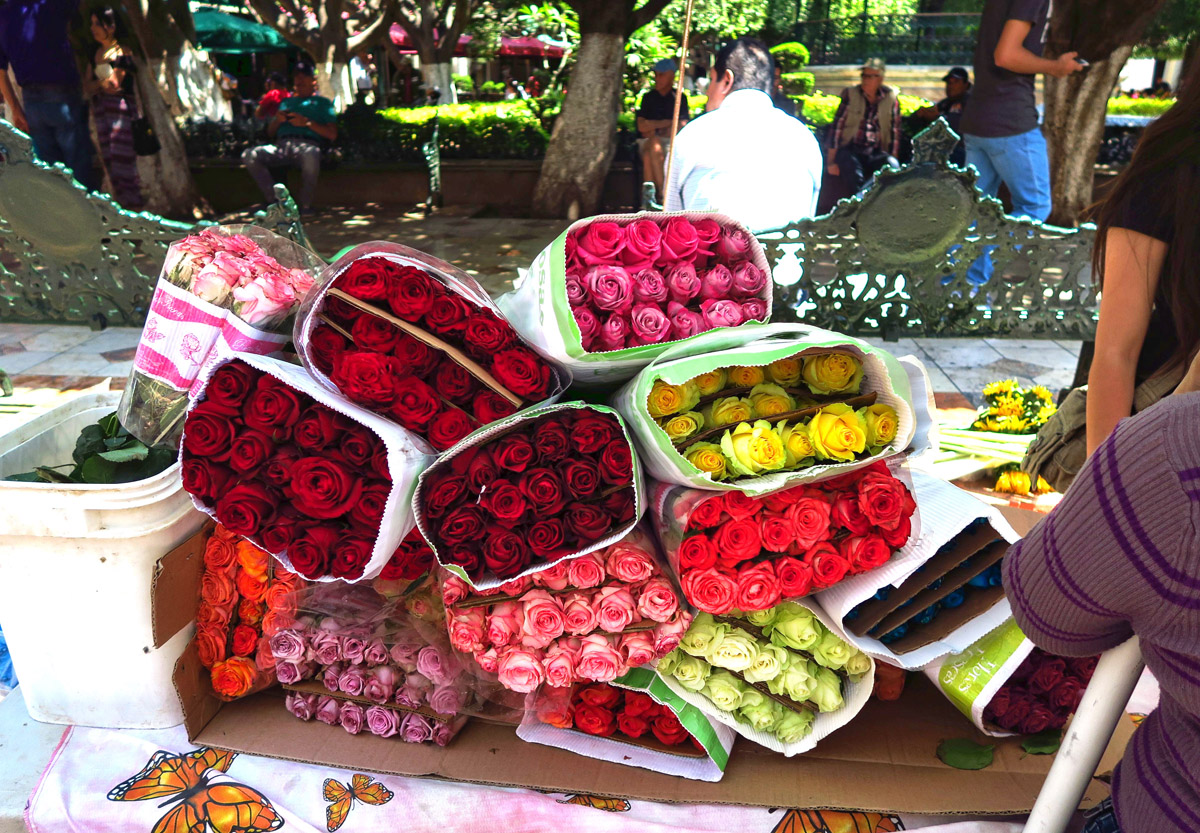 In Guanajuato, the Easter holiday kicks off with “Dia de los Flores,” or “Day of the Flowers,” as a prelude to Holy Week.   The festival is a two part event filled with a dichotomy of gaiety and sorrow.   Sometimes, it’s tough to sort out the emotions, as people stroll through the streets arm and arm with balloons and toys eating ice cream as if it were the 4th of July.   Then, the orchestra in the bandstand strikes up a mournful tune reminiscent of a funeral march, a reminder that it’s all about a crucifixion.  I’m not a religious person, let alone Catholic, so these traditions are new to me.  I don’t know whether to grin with delight from the festival atmosphere, or wipe the smile off my face out of respect.  Such is the nature of the 24 hour “Day of the Flowers.” 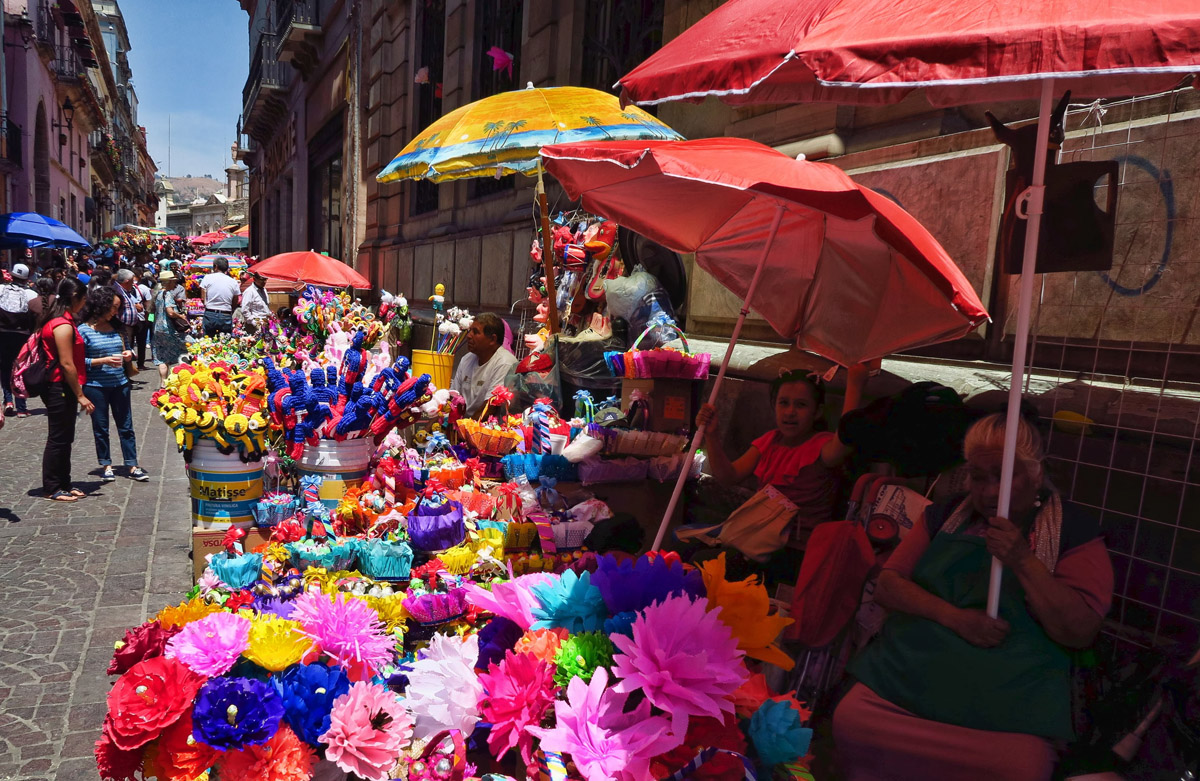 Streets are closed to vehicular traffic as vendors line the sidewalks with eggs, baskets, toys, etc. 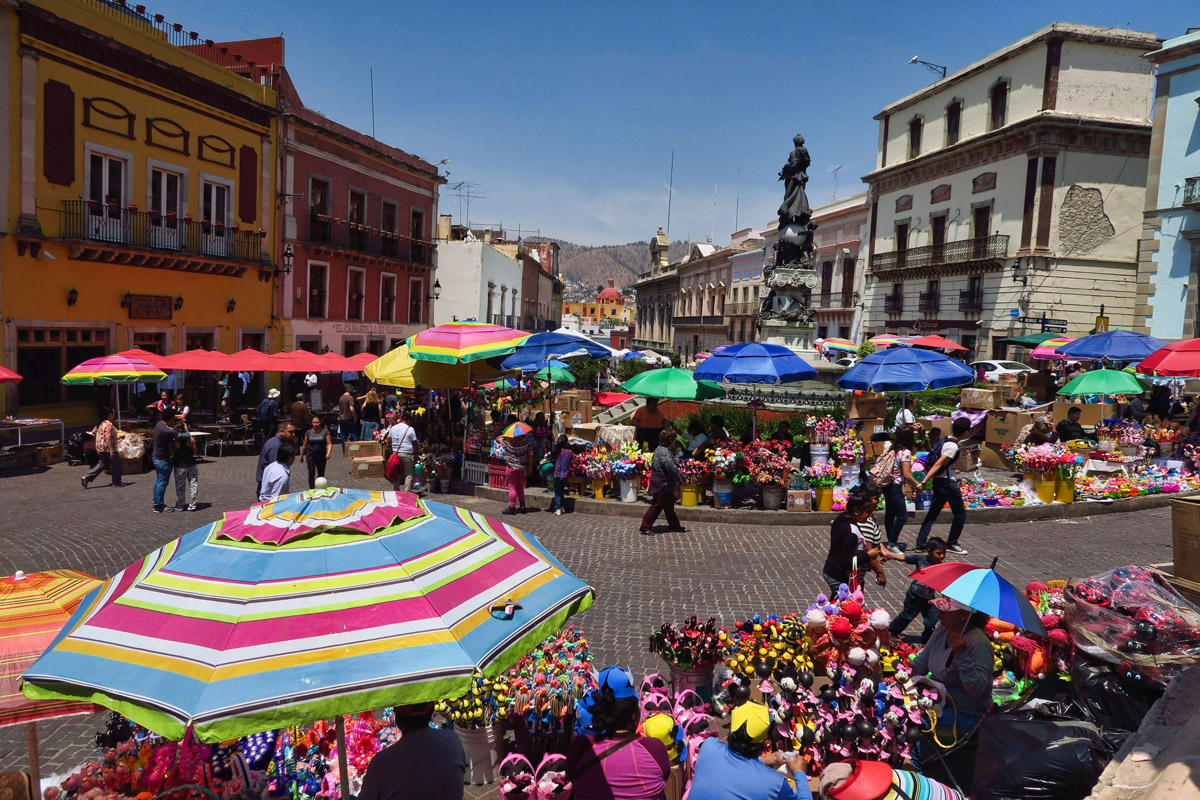 The crowds aren’t too bad in the early afternoon, but of course they get heavier as the afternoon gives way to evening. 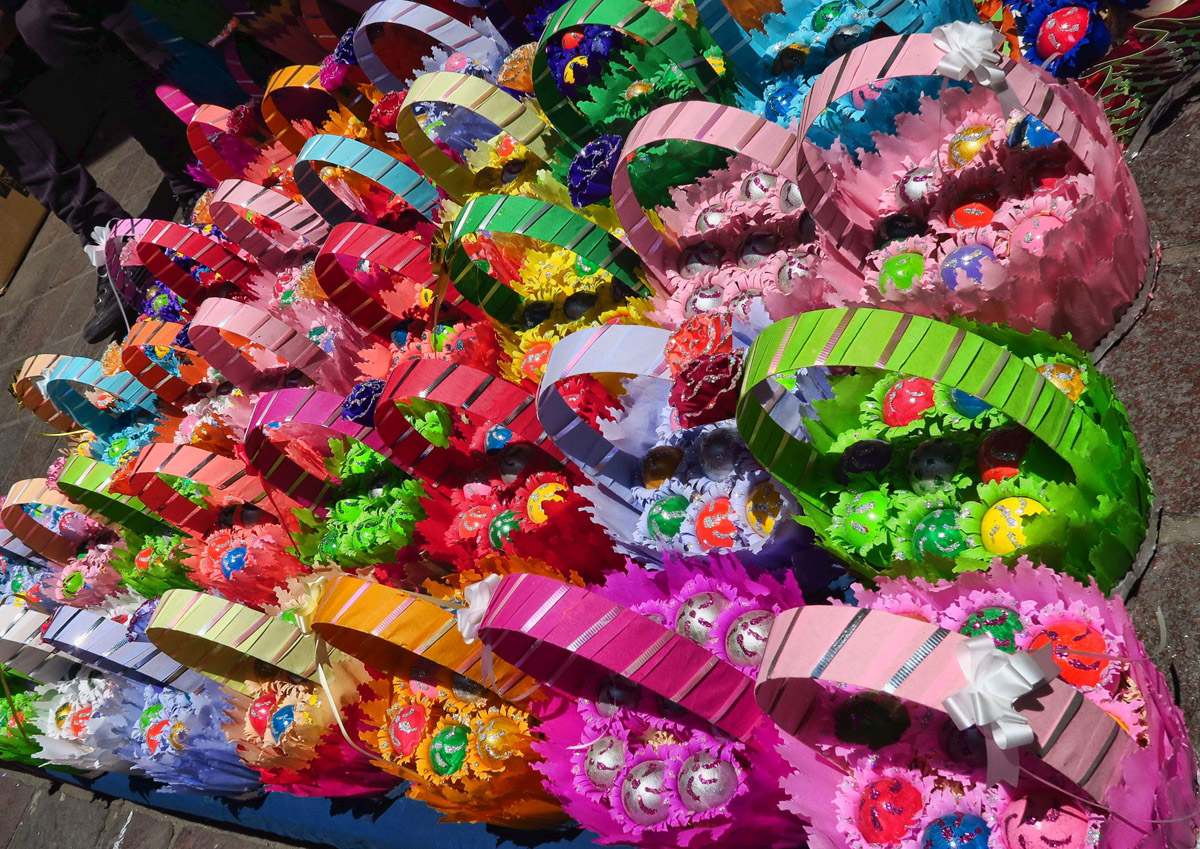 All these baskets contain confetti-filled eggs. 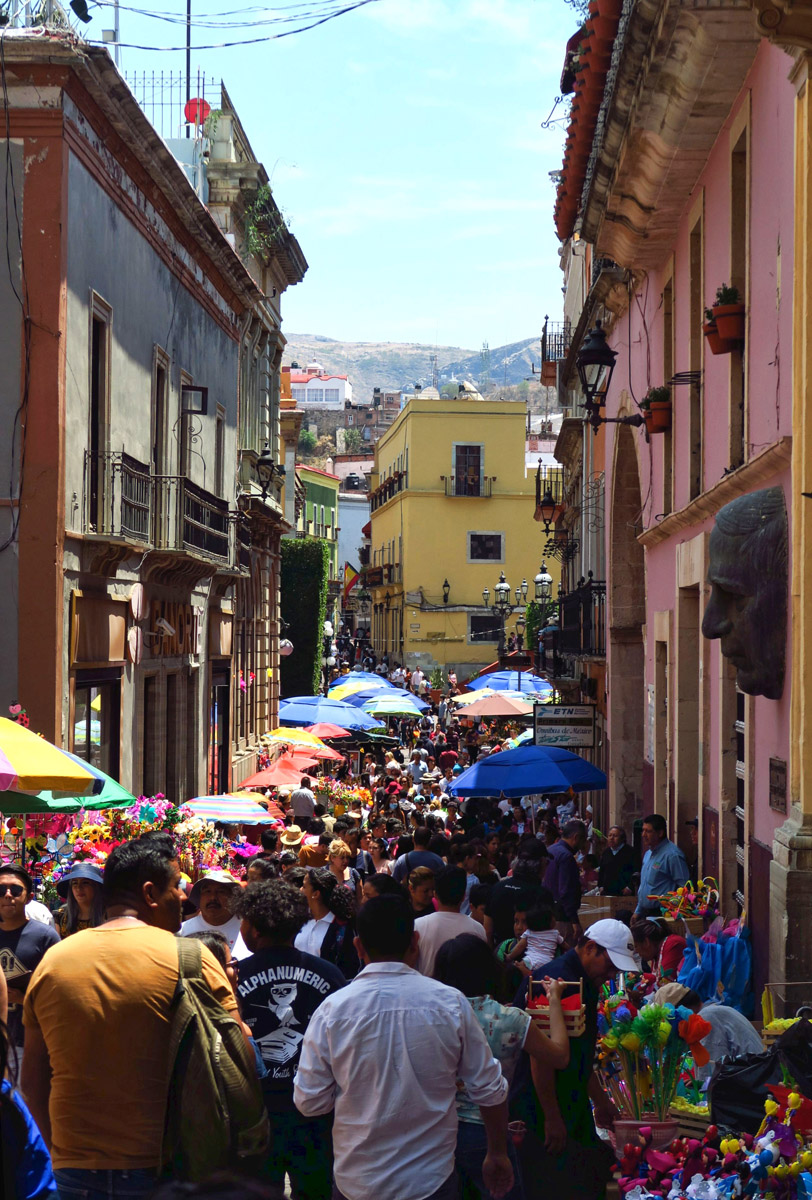 The Friday festival starts ramping up on Thursday afternoon, as vendors begin setting up their tables, blankets, and chairs to display their wares.   Flower vendors rim the entire Jardin de Union, the triangular shaped tree-filled heart of the city.   There are white carnations, tall stalks of Easter lilies, buckets of red, pink, coral, and yellow roses, giant sunflowers the size of dinner plates…bursts of color in every direction.  The heady perfume from the mix of sweet, spicy scents wafting through the air rivals the most elaborate of florist shops.  I can honestly say I’ve never seen this many flowers in one place at one time before. 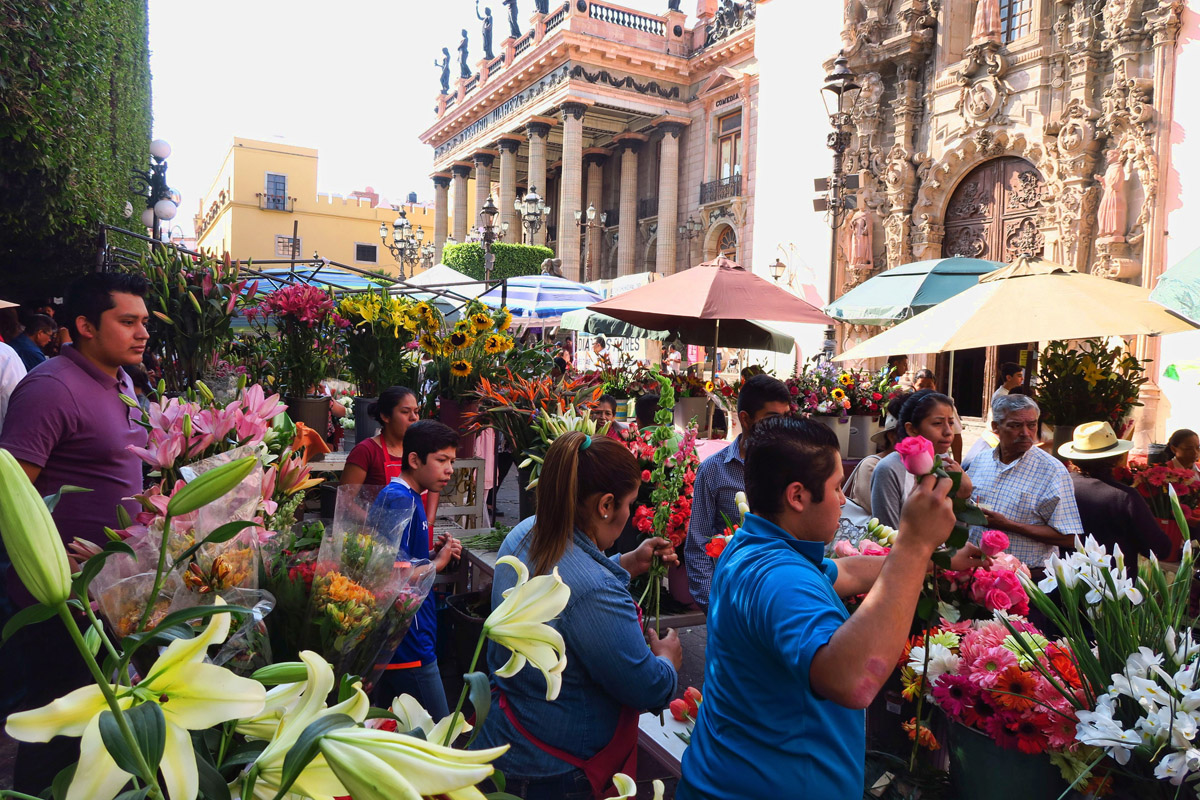 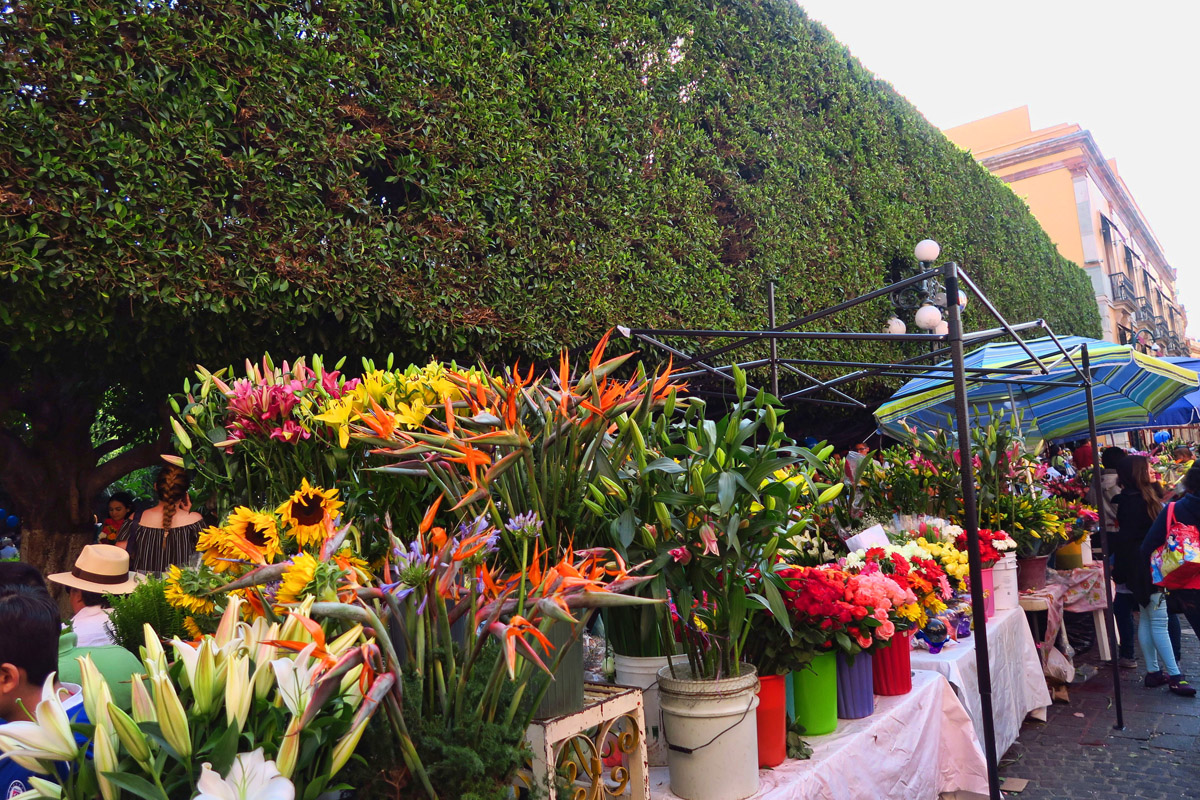 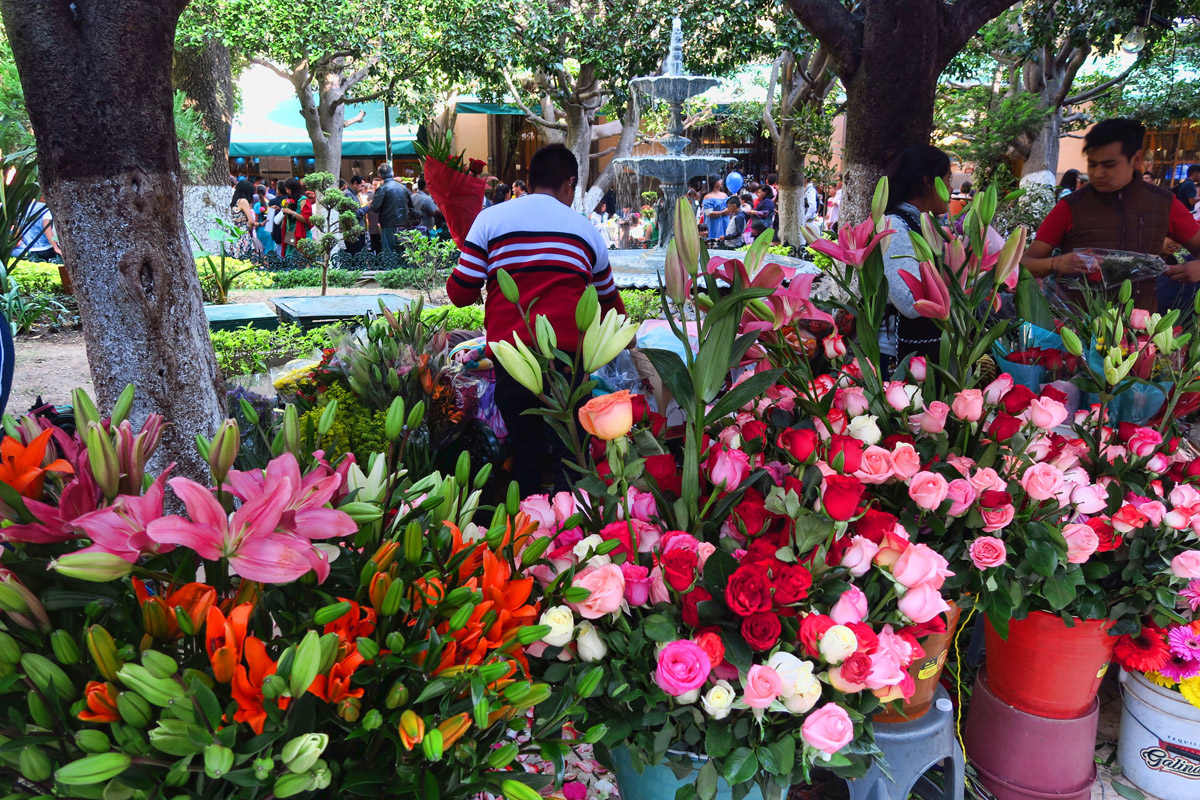 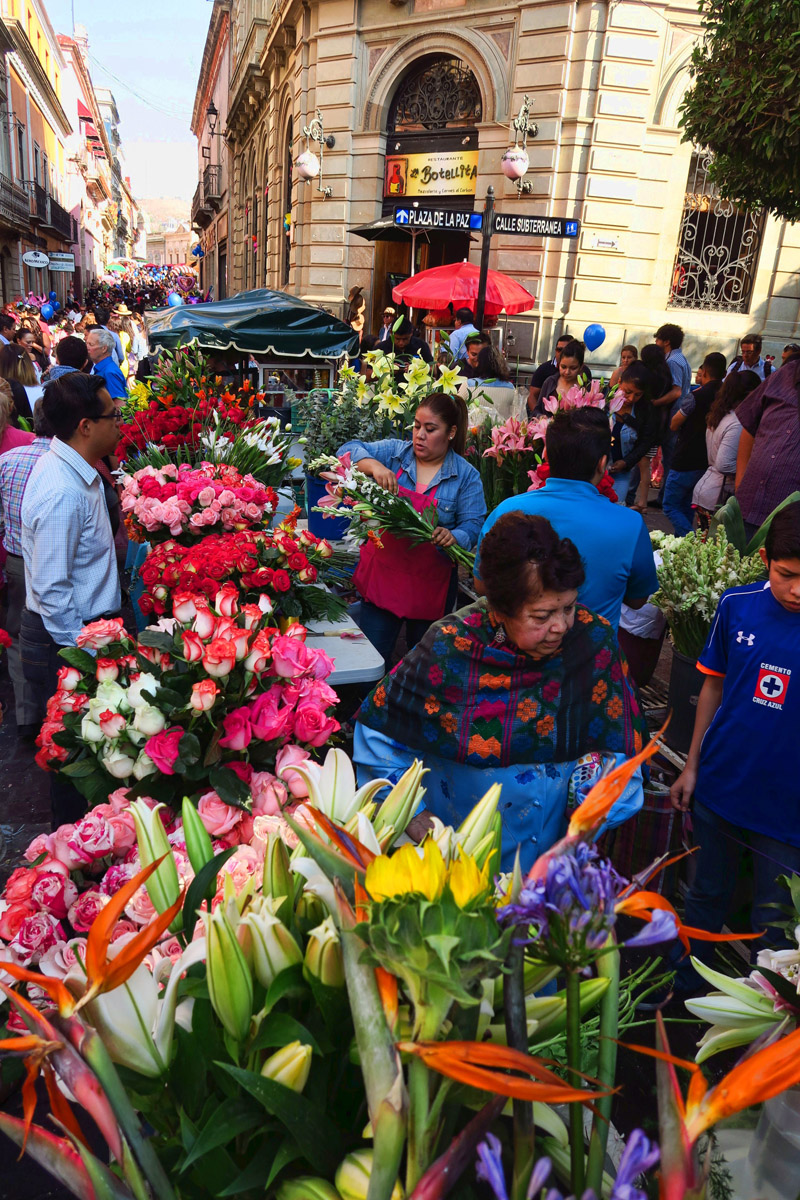 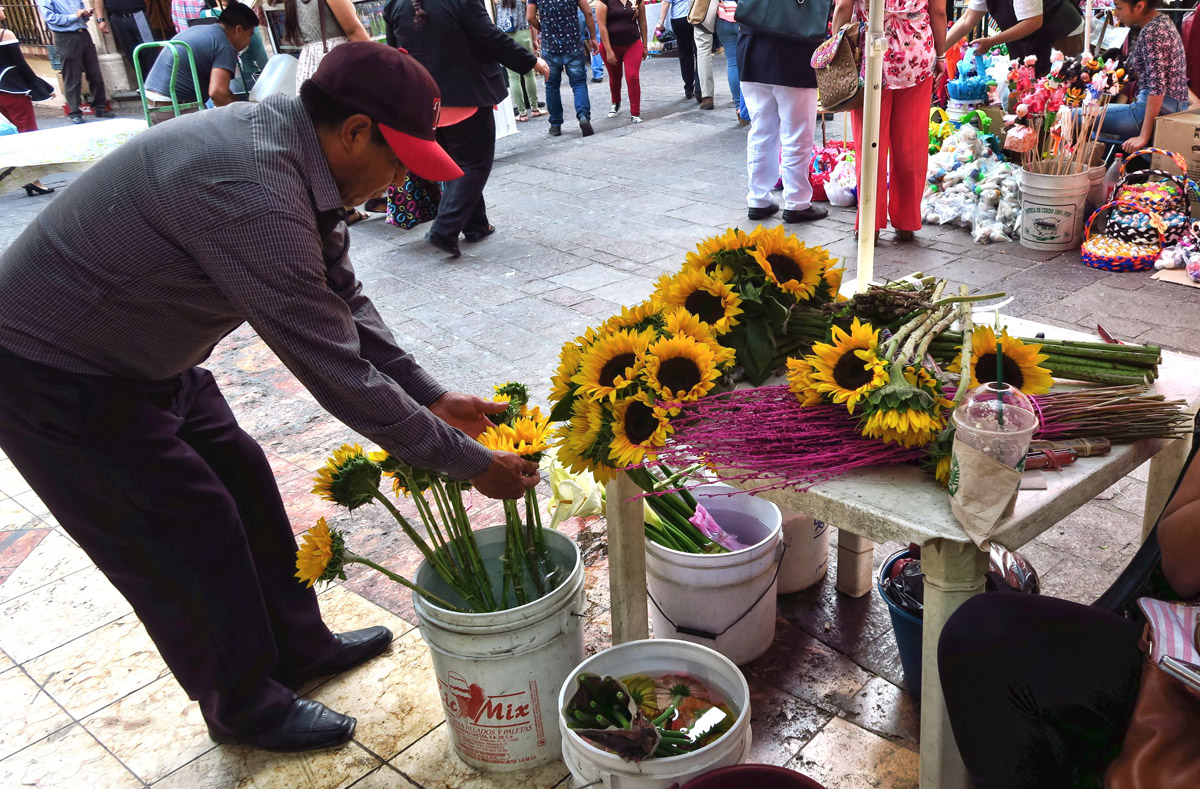 I wander the streets watching the festivities unfold in what appears to be “districts.”  The majority of the flowers are concentrated in the Jardin Union, with a few spilling over into the small Plaza Baratillo a block away.

As I walk down the main street of Benito Juarez, I come to the “toy district,” with eggs and Easter baskets lining the sidewalks for as far as I can see.  There is more plastic than I care to reconcile.  But many of the eggs are the real deal, their “cascaras” (shells) filled with confetti of colored paper.  There appears to be some tradition of smashing these eggs over another’s head, the confetti raining down over their shoulders an onto the streets.  Eggs on the end of a wooden stick are decorated in every imaginable cartoon character. 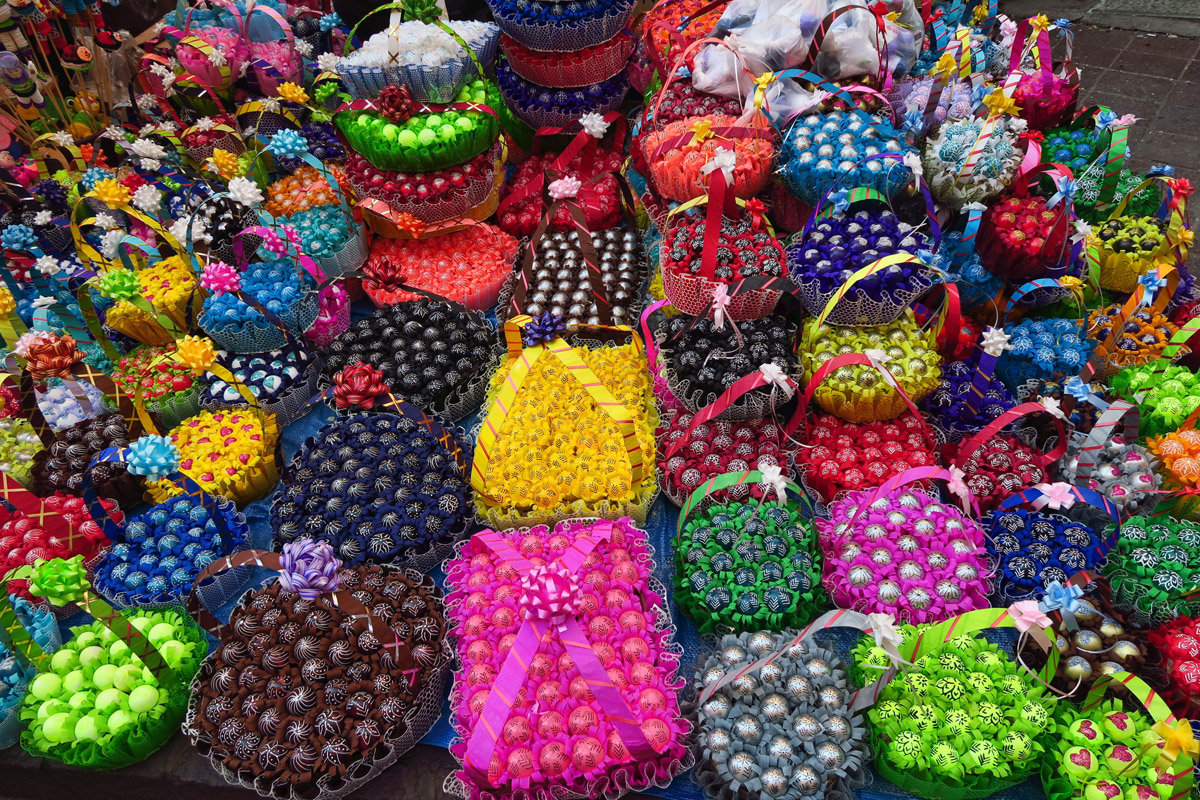 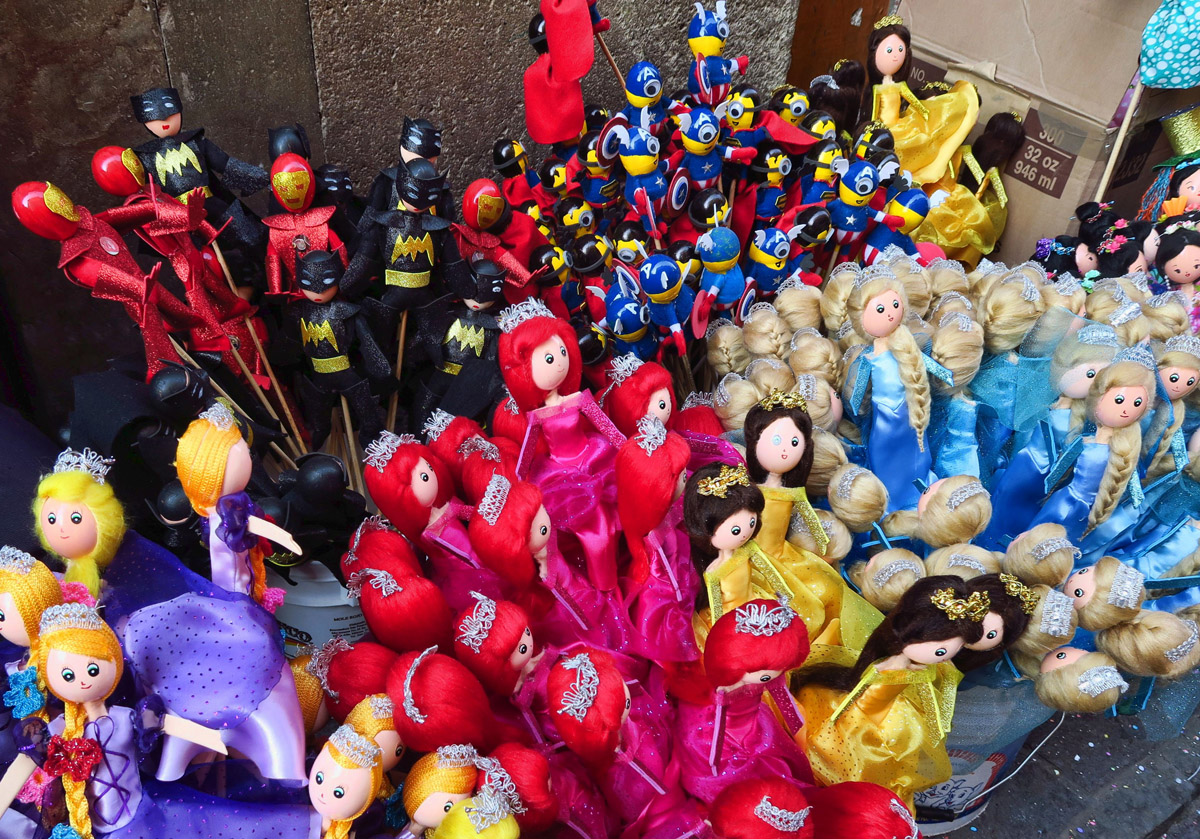 Most of these cartoon characters’ heads are real eggshells. 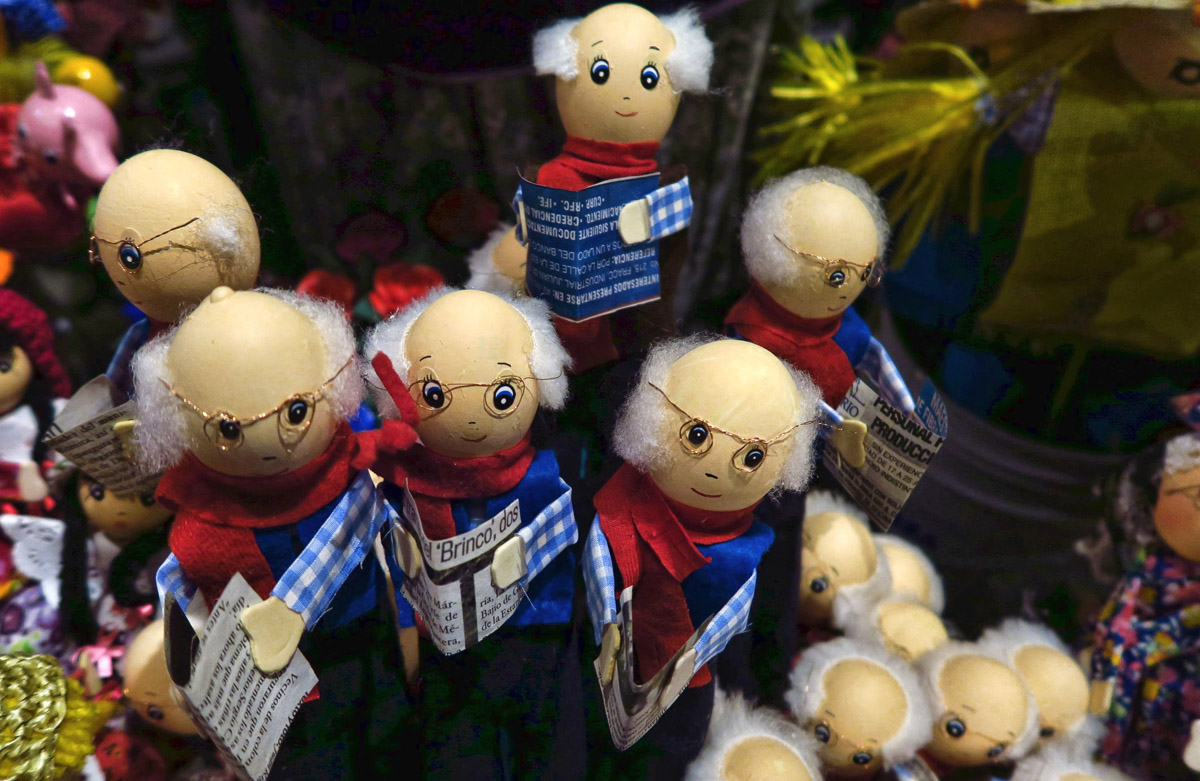 I particularly love this one, because he reminds me of Bernie Sanders. 😉 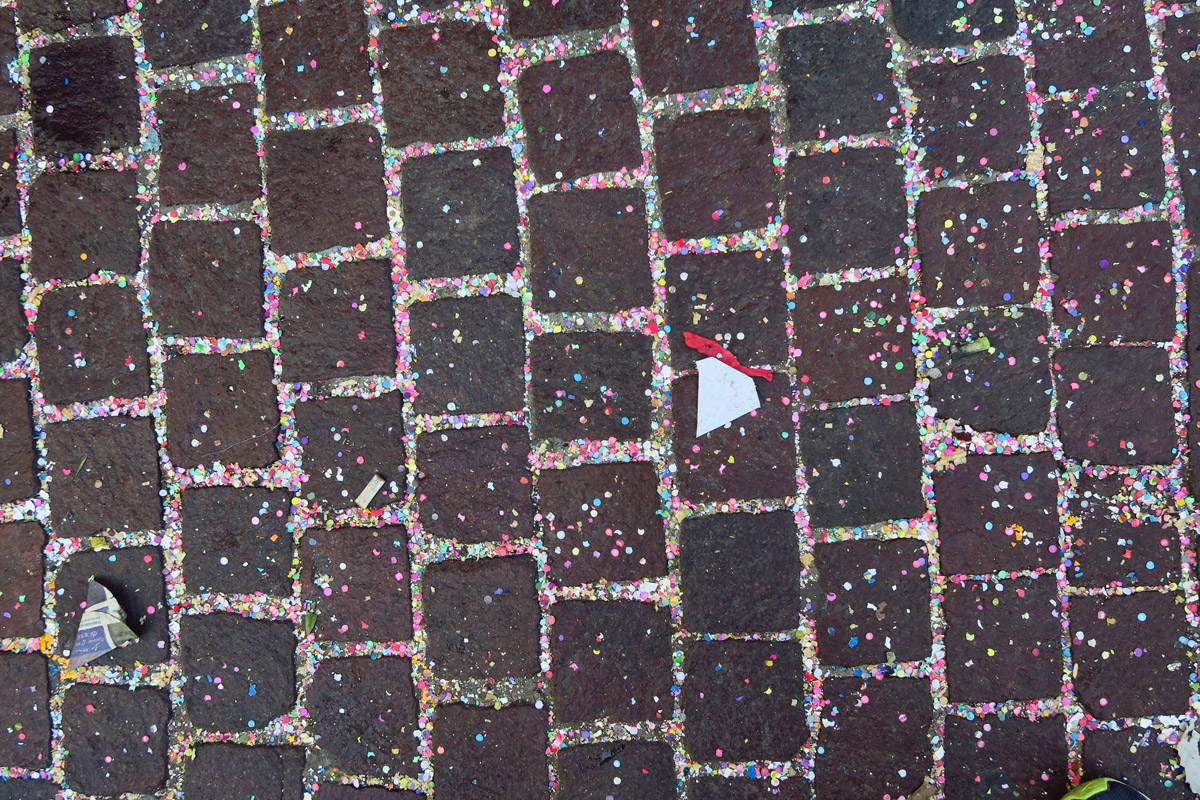 By nightfall, the sidewalks are strewn with confetti from the eggs. 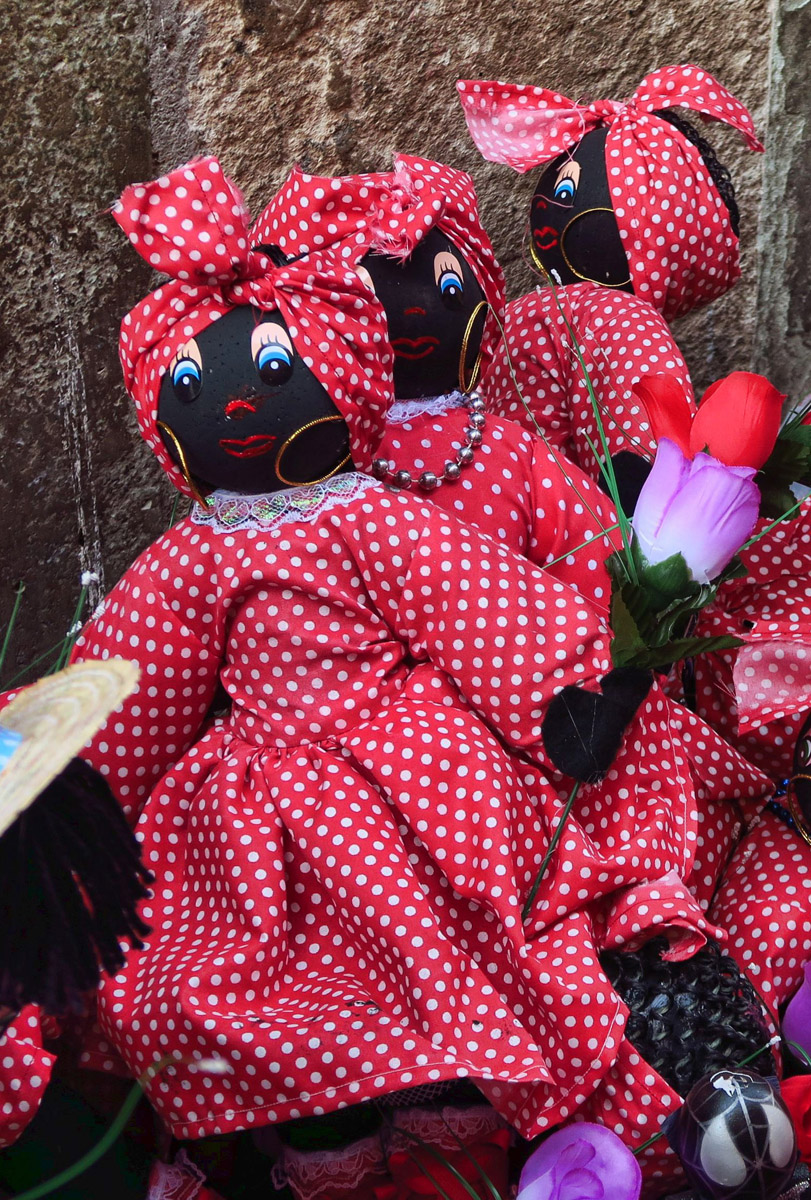 Not sure about this one…

Further on down Benito Juarez is the “food court.”  Here, vendors have set up to serve everything from arracherro (grilled steak) to menudo (my personal “red line,” stew made from cow intestine.)   There are giant tables with divided sections filled with assorted candies.  Fried churros (think donut) dipped in colored sugars.  The aroma of the flowers at the opposite end of the street is only eclipsed by the smell of sizzling meat as the charcoal fire fuels the “comals” (flat grills) and deep fat fryers for gorditas, tacos, and even homemade potato chips. 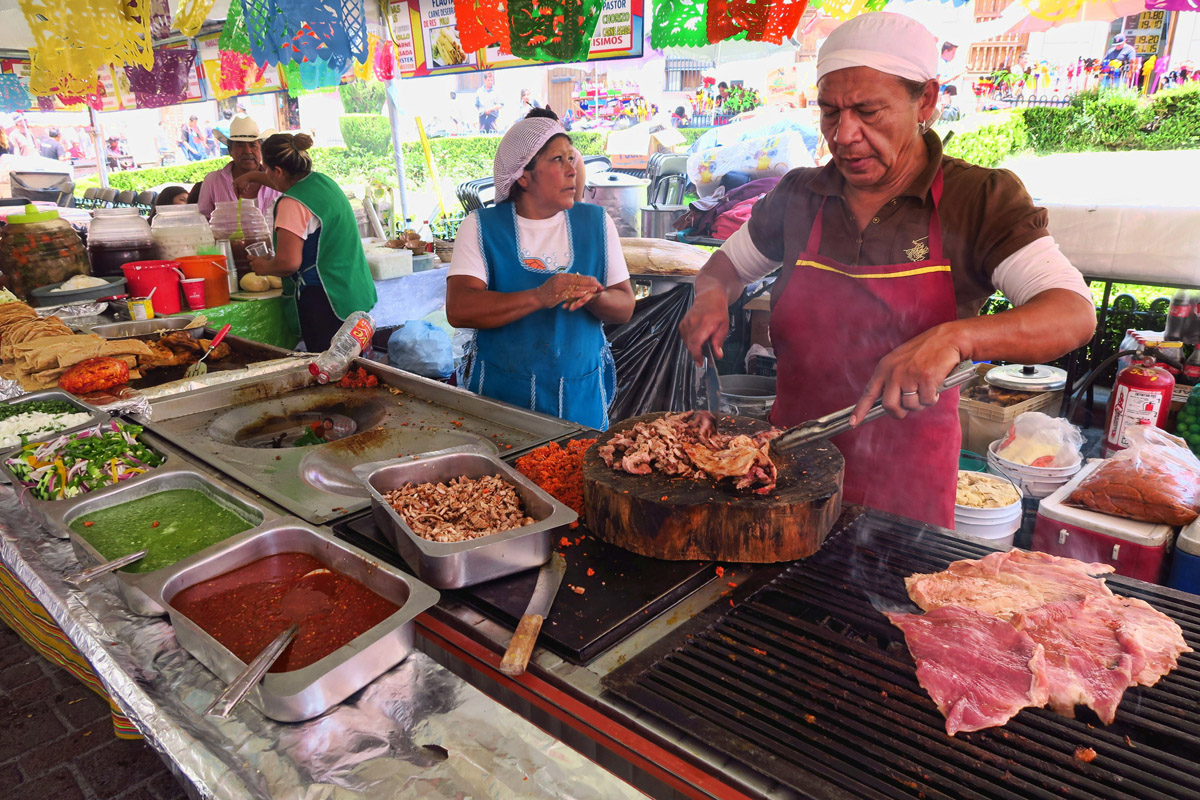 The aromas from this charcoal-grilled arracherra steak vendor are intoxicating. 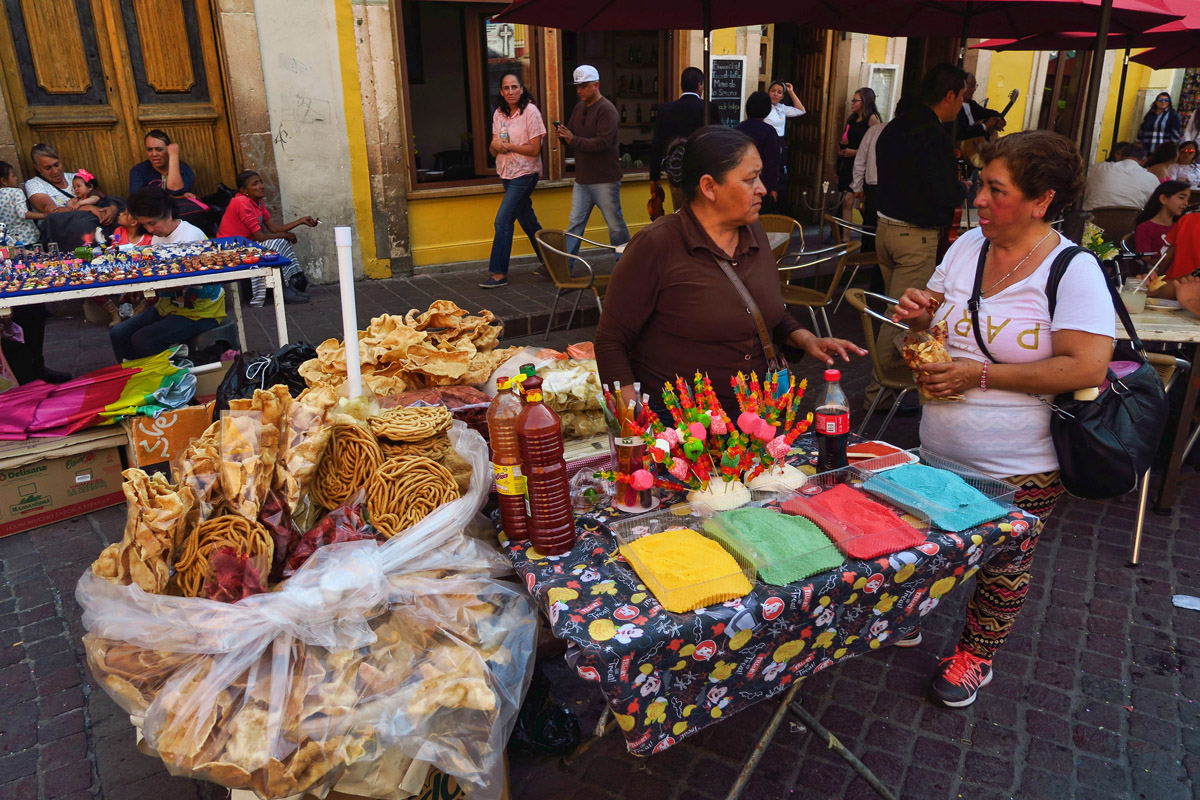 People dip everything from fried noodles to hard candies into these four trays of colored sugar. 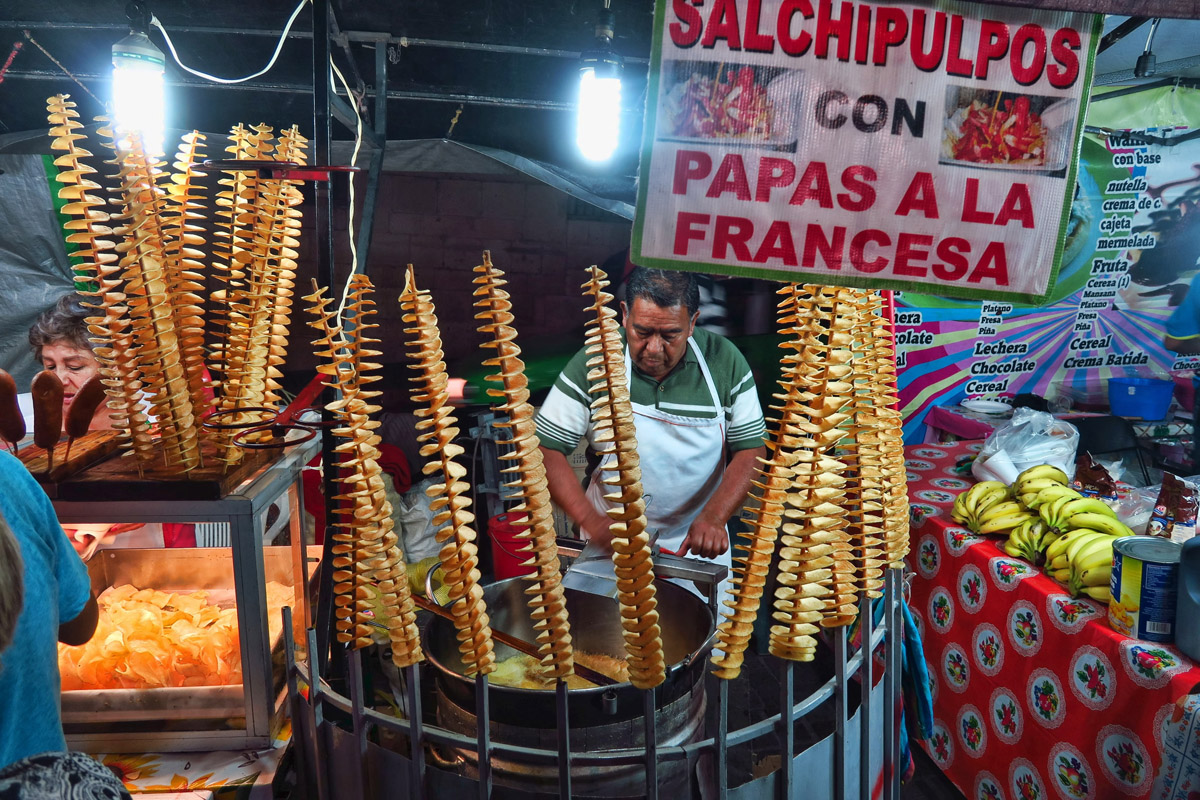 Giant sticks of fried potatoes. (Does it count as “Vegan” if it’s fried in lard?) 😉

This party goes on all night.  The music echoing up the hills from the Jardin never stops.  I don’t think the vendors or the party-goers go to bed all night.   I learn new words like “borracho” (drunk) and “crudo” (hangover.)  This is the “happier” side of the festival. 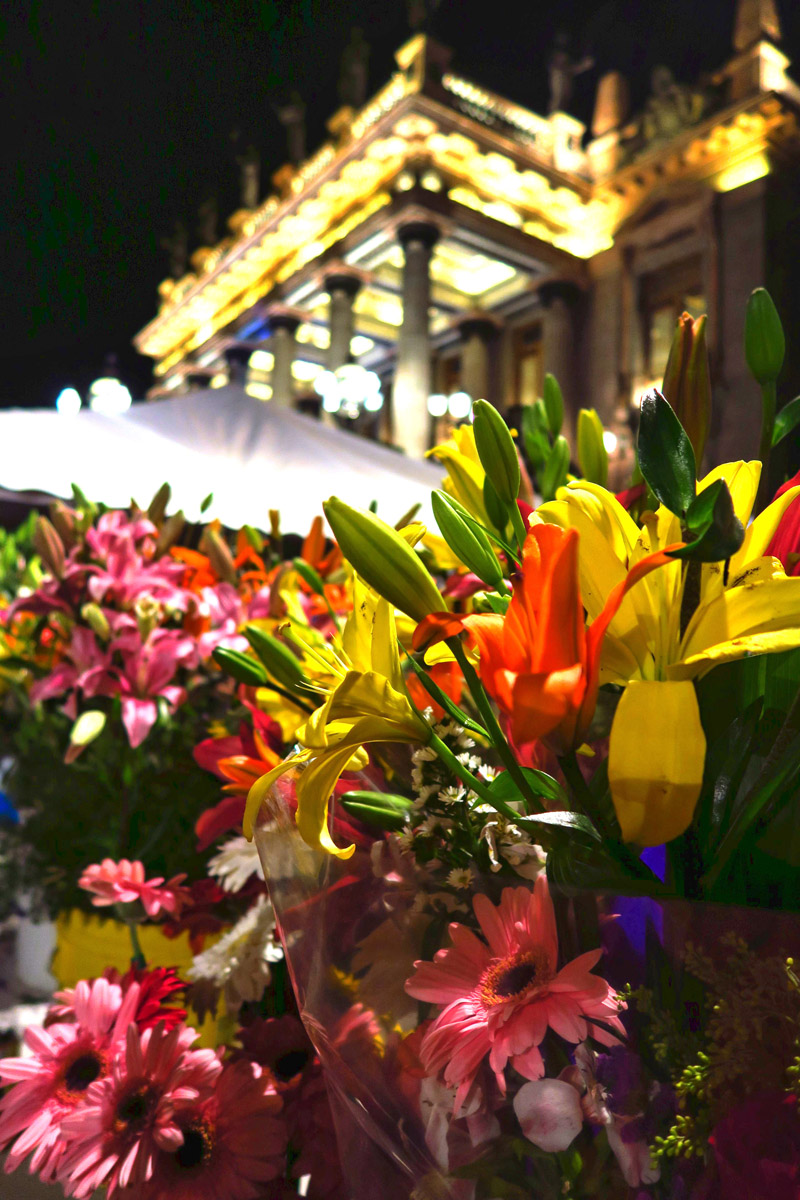 Night falls and the lights come up on Teatro Juarez, and the flower vendors don’t sleep. 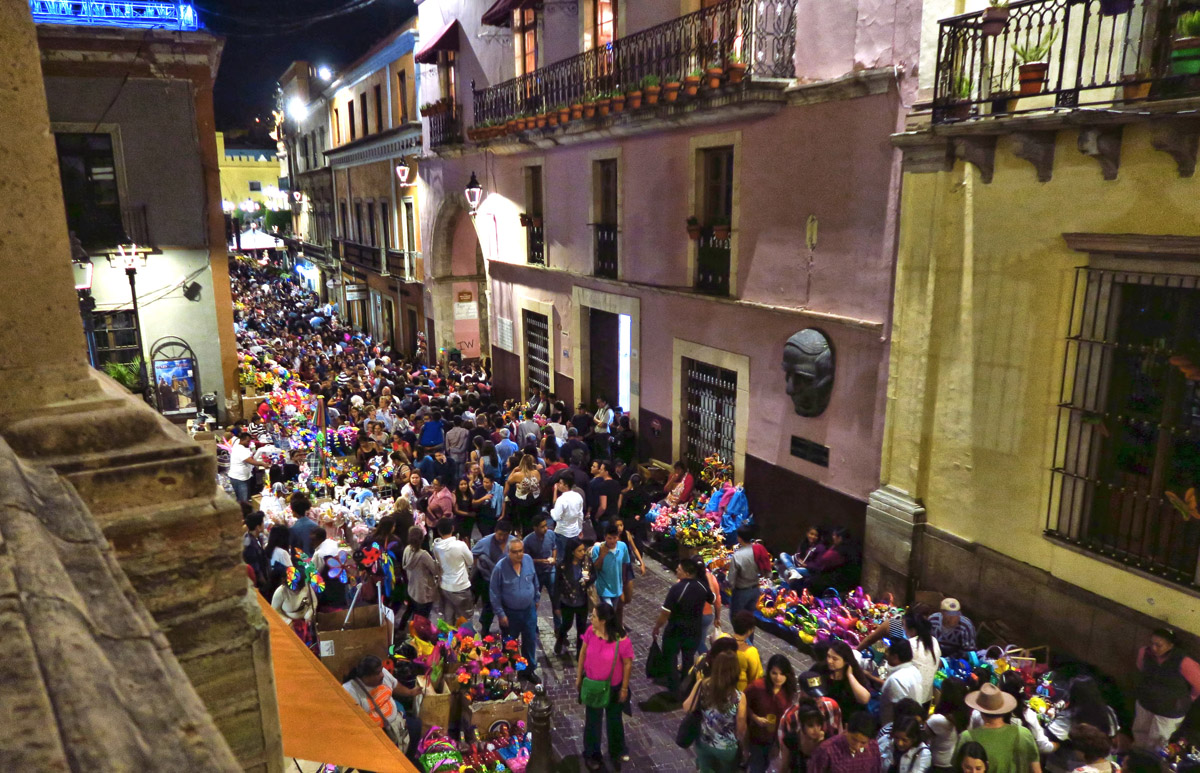 Looking over the crowds along Benito Juarez from the steps of the Basilica. 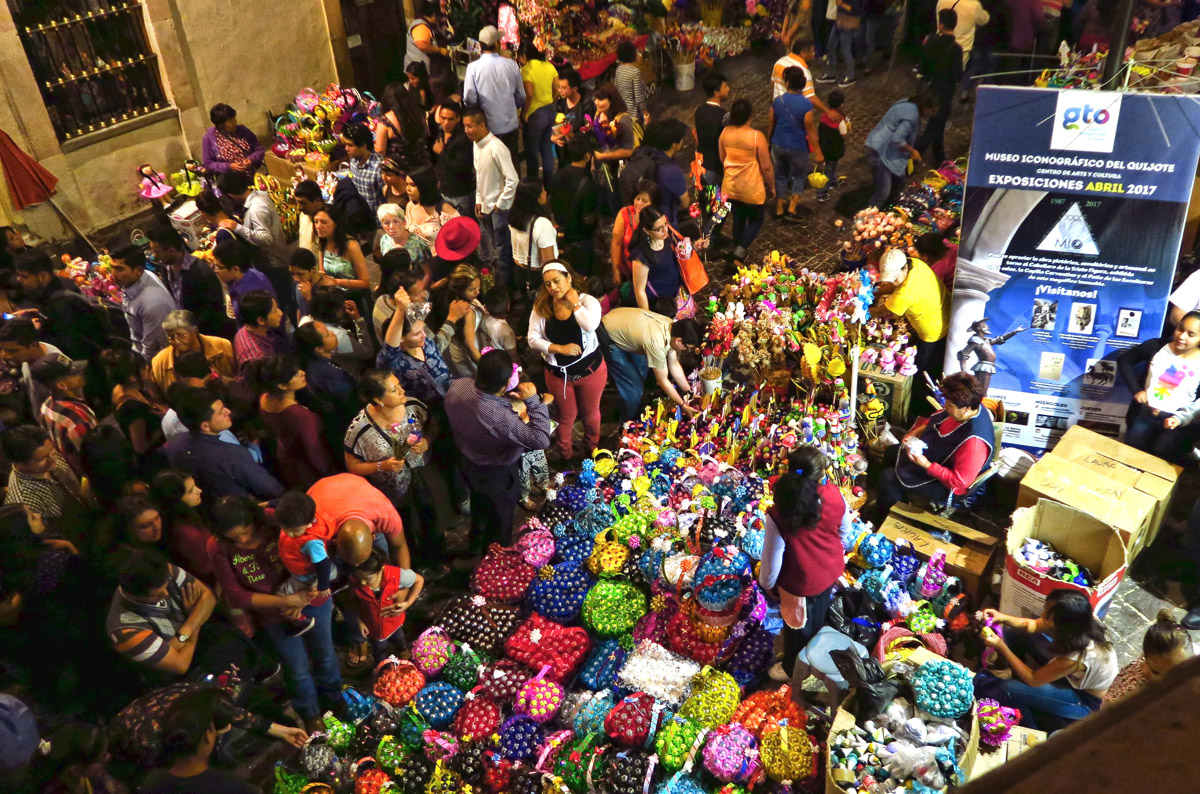 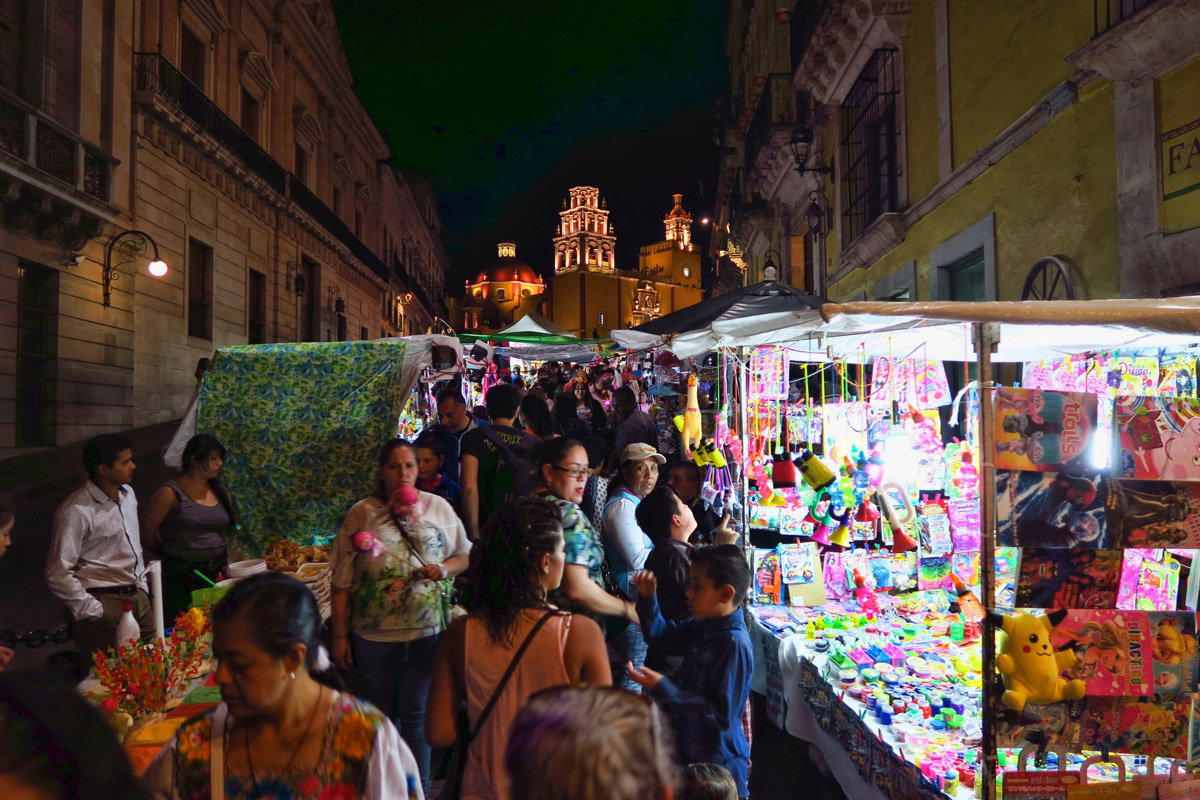 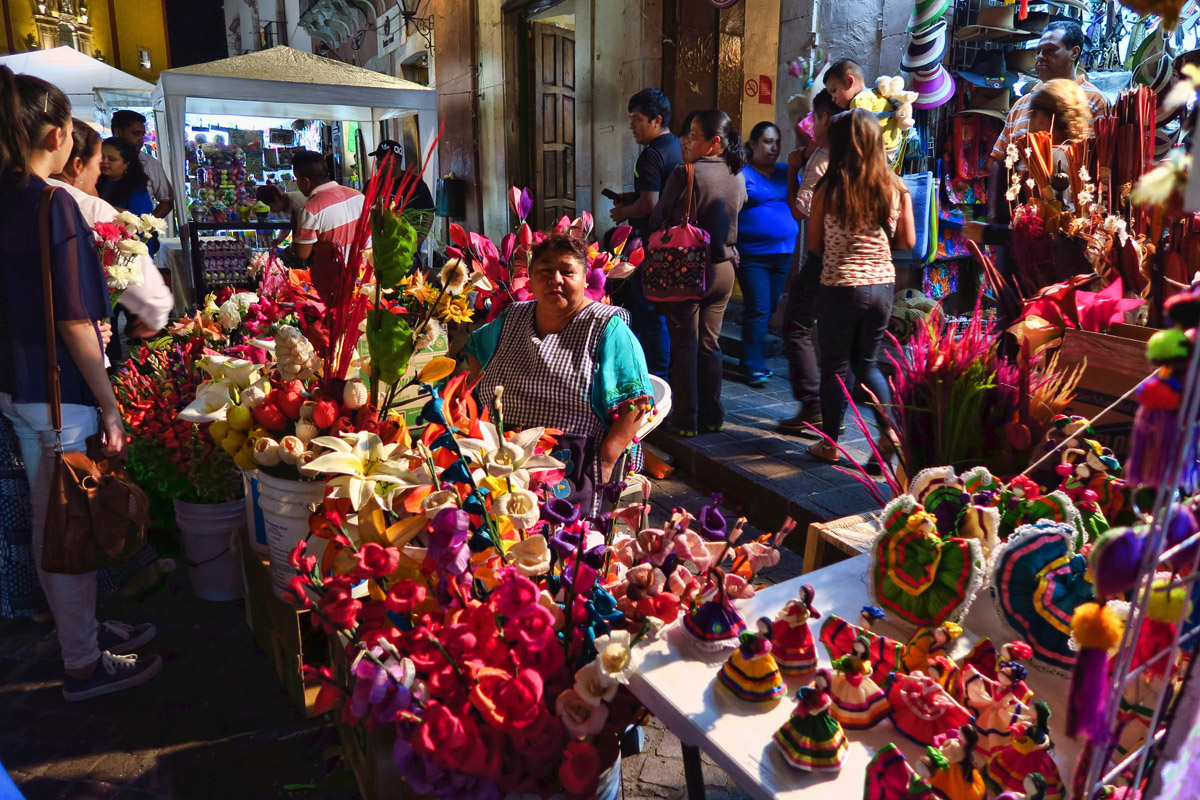 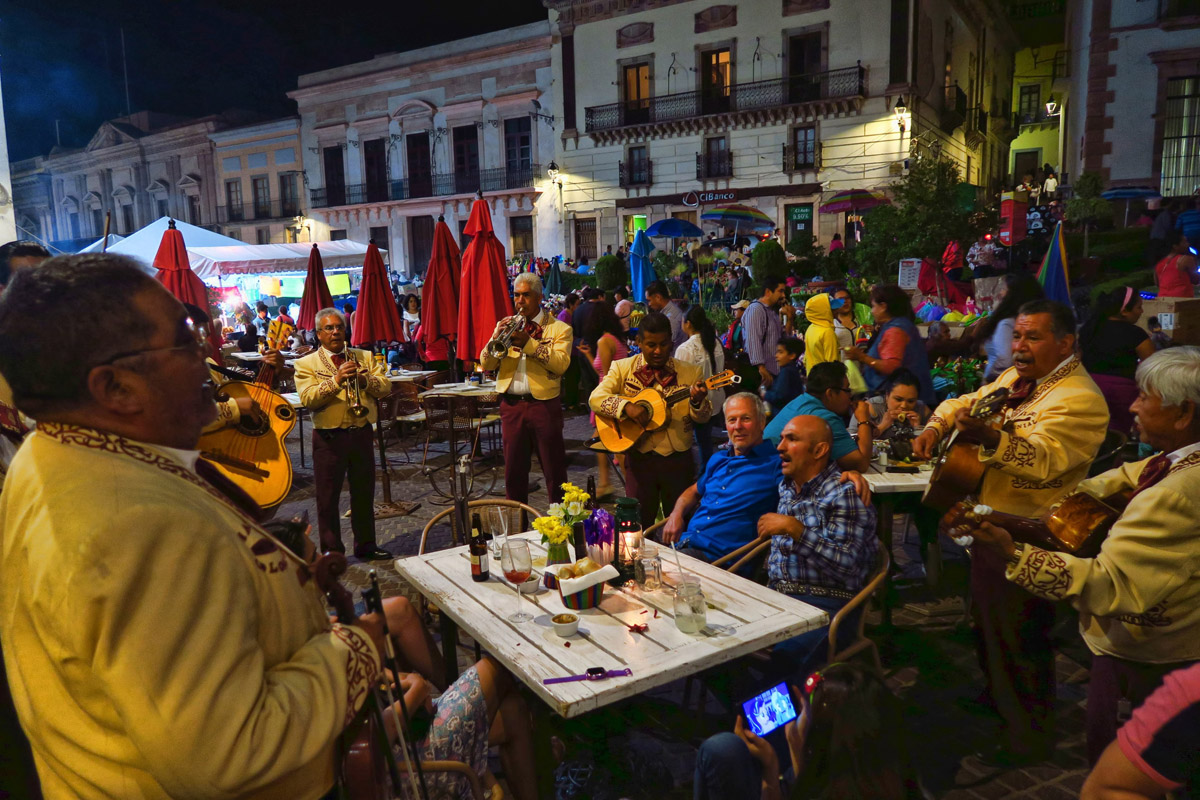 Music and singing continue on all night.

Next up, “Nuestra Señora de los Dolores,” Our Lady of the Sorrows, the more sorrowful side….

10 thoughts on “Dia de los Flores, Day of the Flowers”