On another “field trip” with my Spanish school, Escuela Falcon, six of us students load up into a van on an early Sunday morning to explore the nearby city of Dolores Hidalgo, another “Pueblo Magico,” or Magic Town, a tourism designation for cities with natural, historical, or cultural significance.   Dolores Hidalgo draws crowds for three very different reasons.  In one day trip from nearby Guanajuato or San Miguel, it’s easy to get a taste of all three. 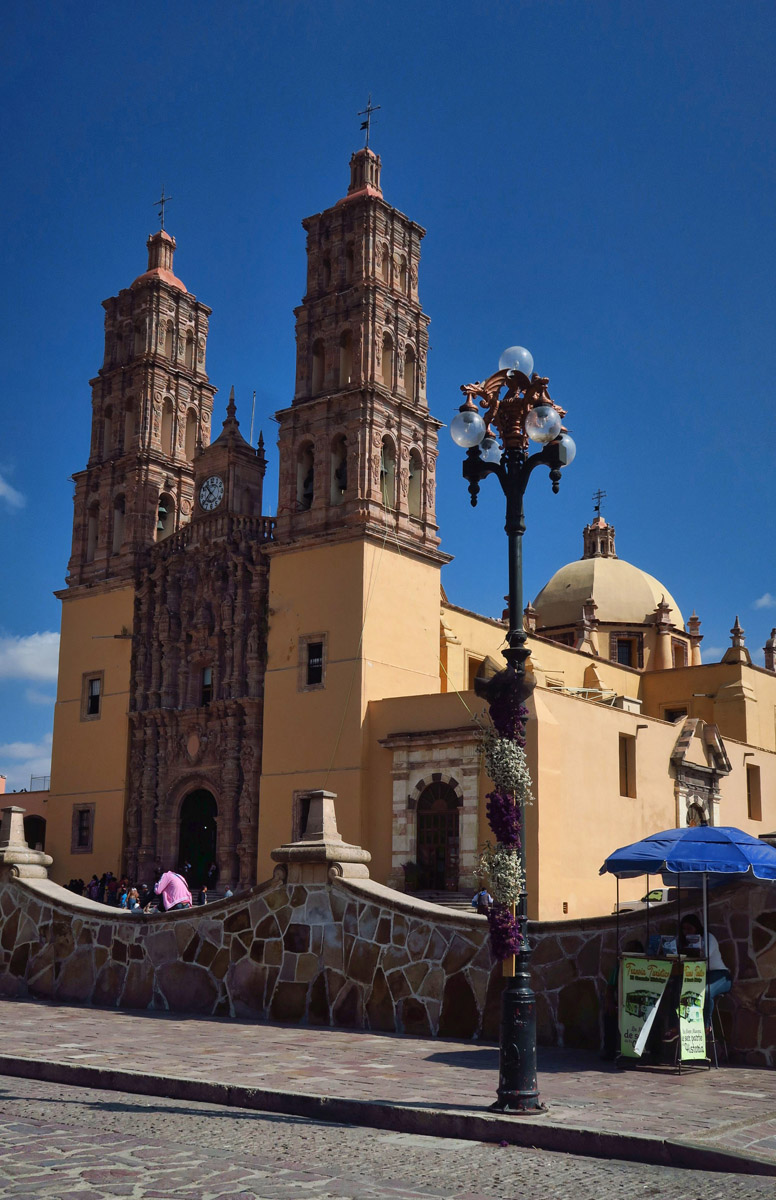 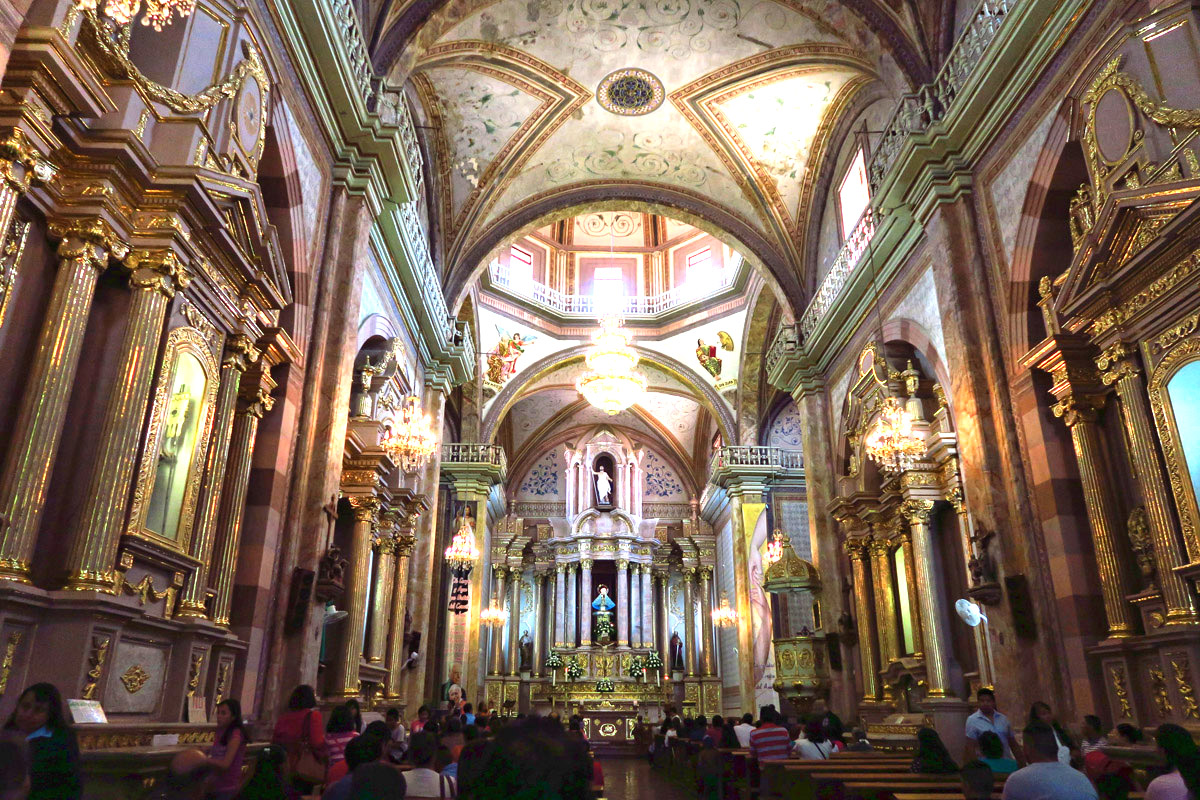 Inside of the church is particularly beautiful with its pastel colors edged with gold. 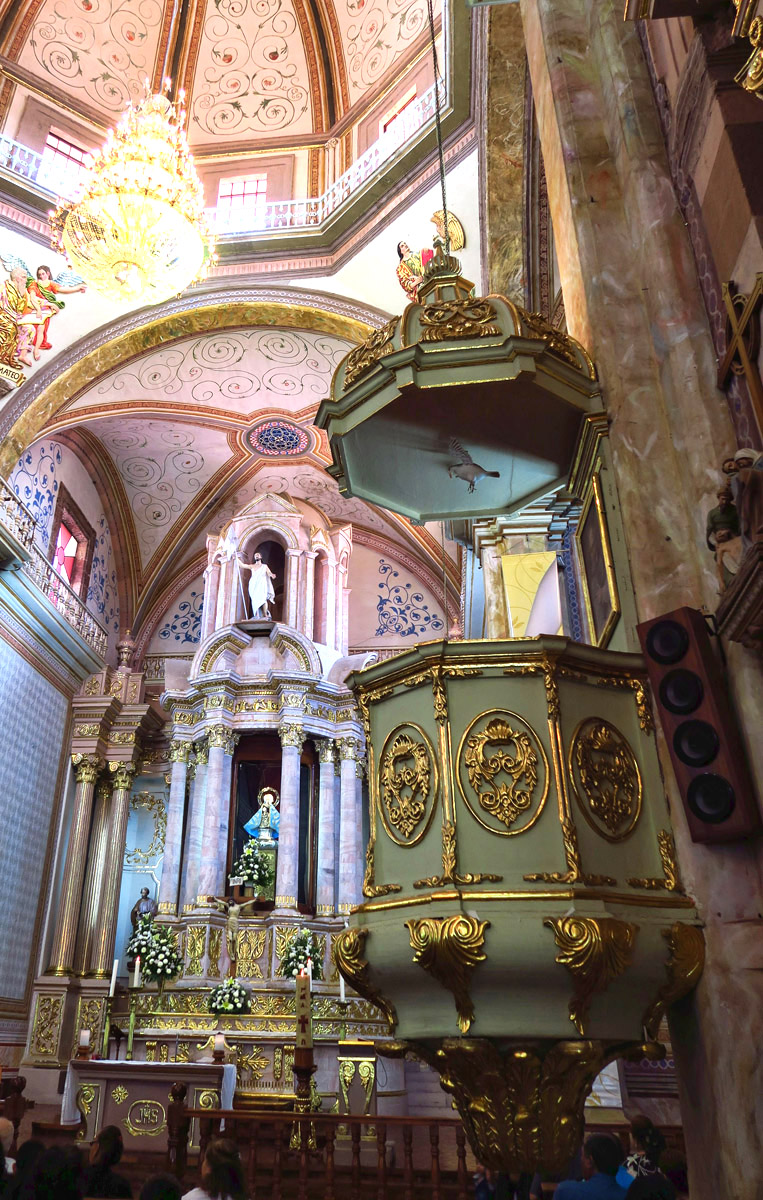 This pulpit makes me think of a Faberge Egg. 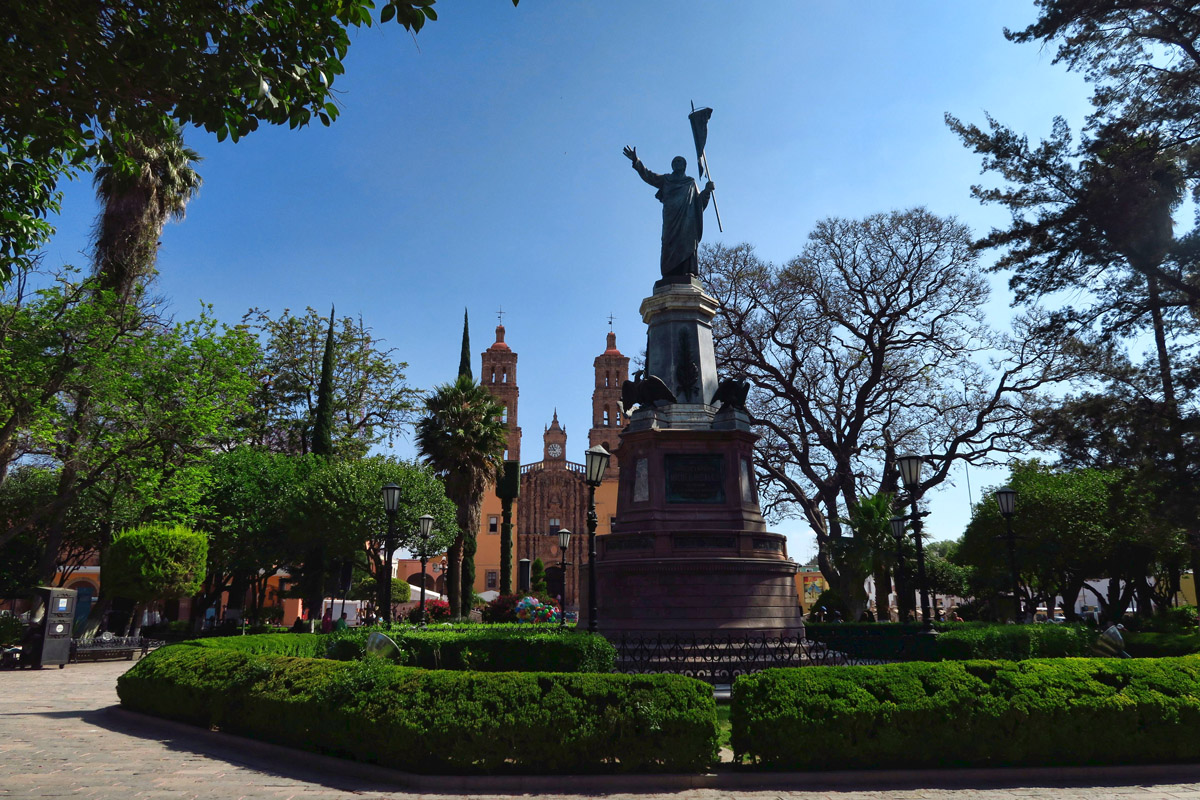 Dolores Hidalgo, once known as just “Dolores,” was renamed in honor of Father Miguel Hidalgo, the parish priest who issued the “Grito de Independencia,” or call to arms saying essentially, and I’m paraphrasing here, “death to bad government and the Spanish overlords.”  This decree took place on September 16th, 1810, Mexico’s Independence Day.  Many tourists believe Mexico’s independence to be associated with Cinco de Mayo, but in fact “Diez y Seis de Septiembre” is the more famous holiday in Mexico, equivalent to our July 4th. 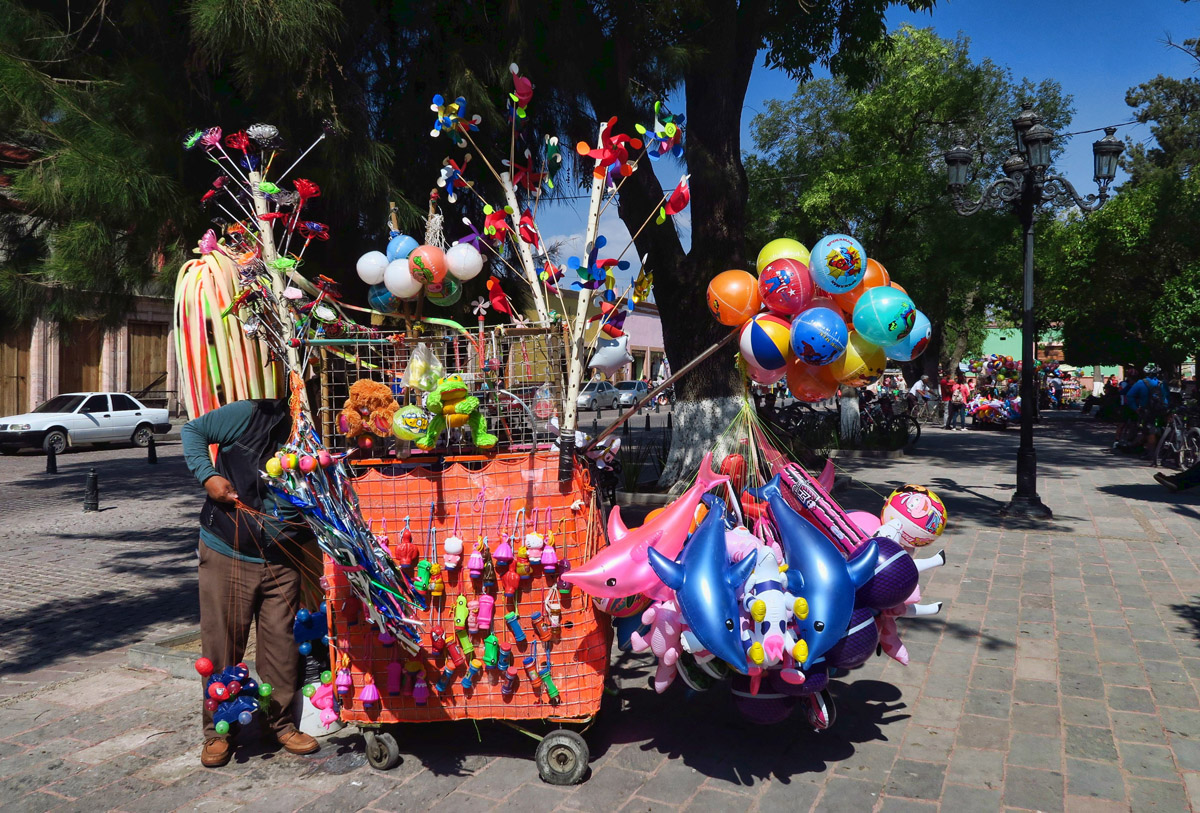 Typical Mexican Toy Cart. I can’t help but think about all that plastic! 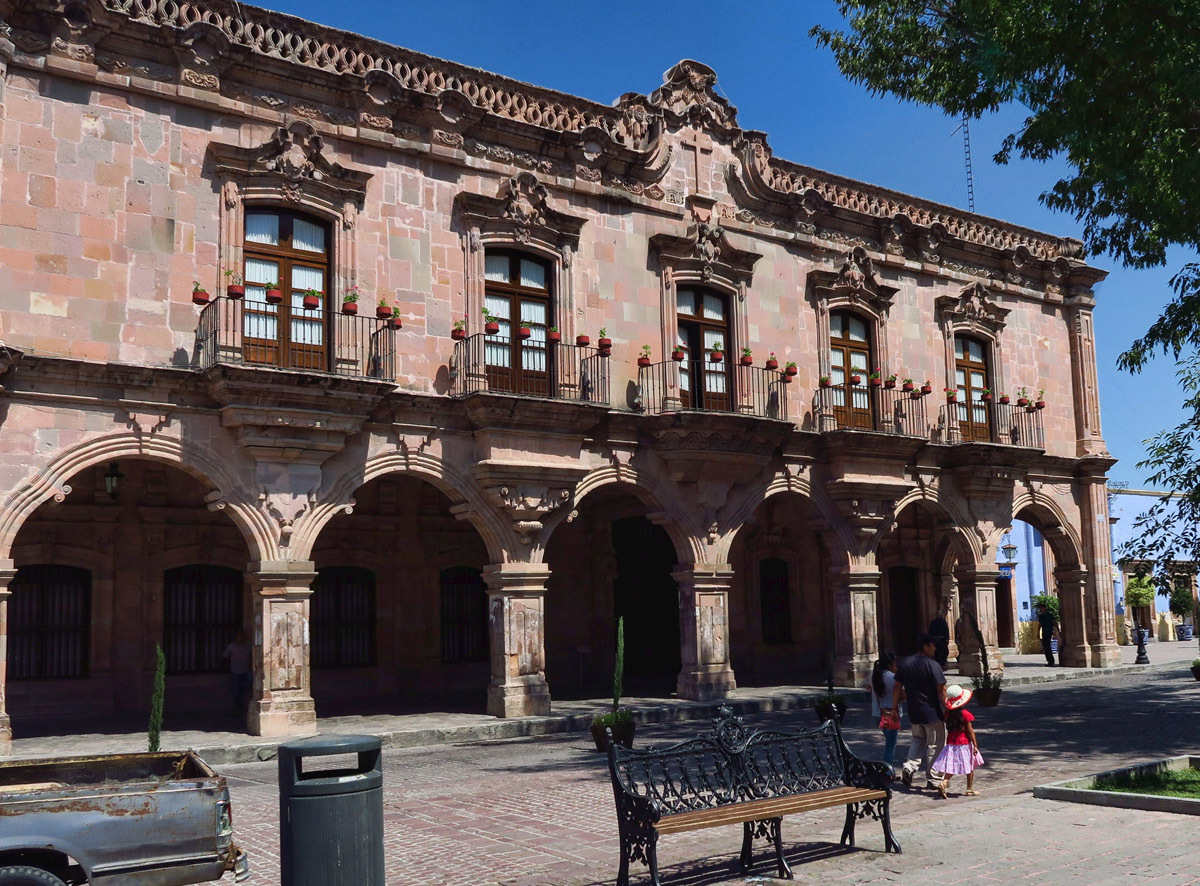 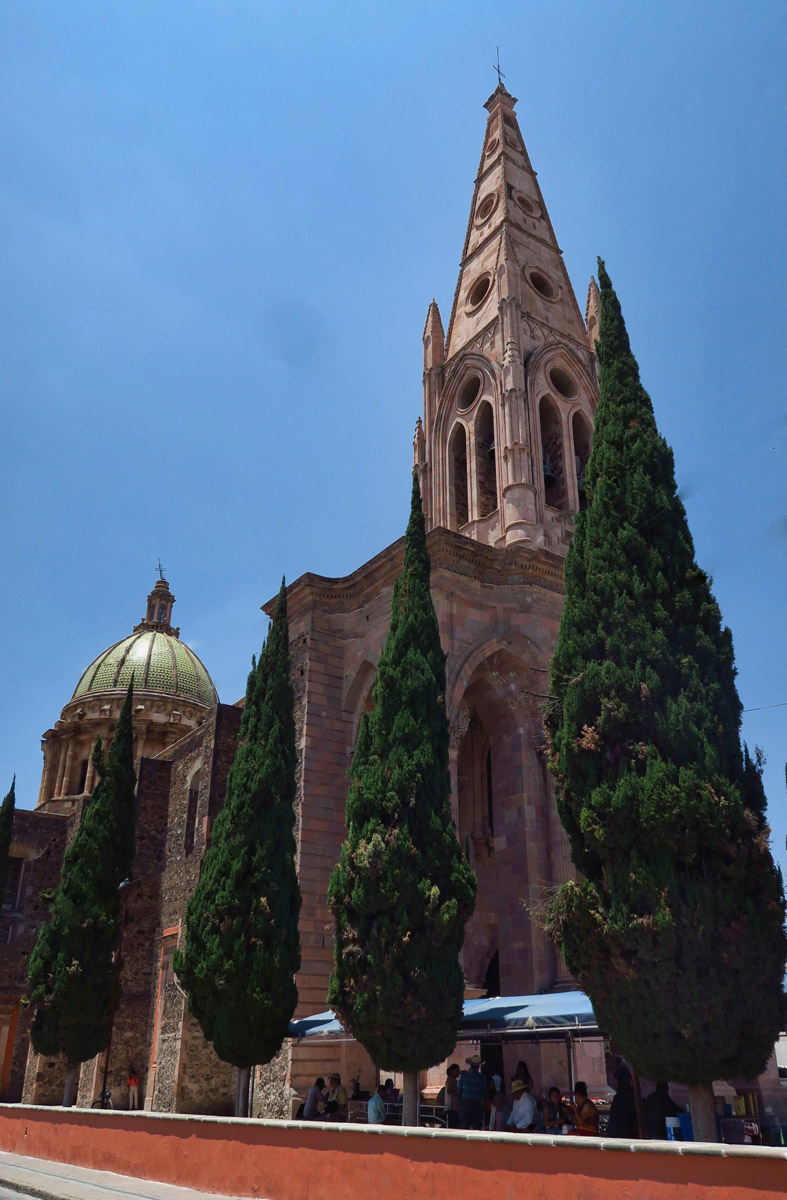 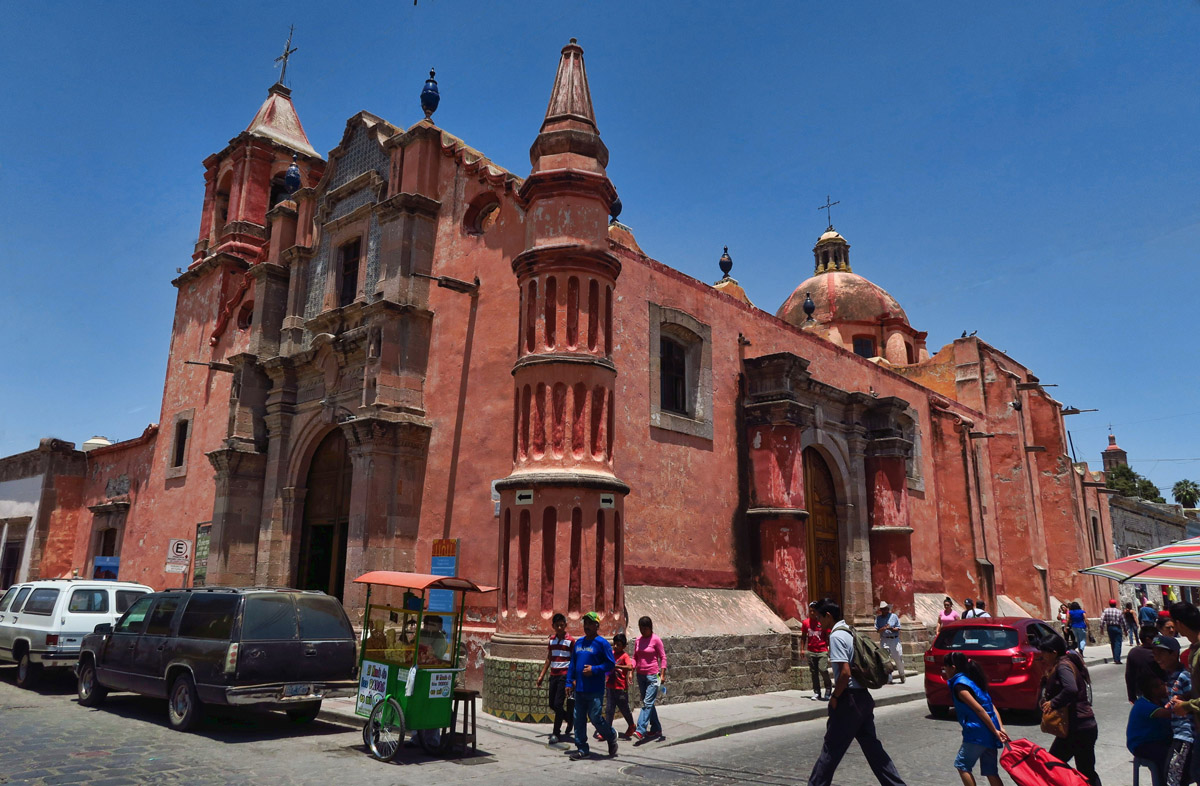 Dolores Hidalgo has many large churches.

This declaration which earned Dolores Hidalgo the name “Cradle of National Independence” occurred in the Parroquia de Nuestra Señora de Dolores.  This 18th century church in the Churrigueresque, or baroque style, opens up onto the busy Jardin del Grande Hidalgo, centered around a bronze statue of Father Miguel Hidalgo.  This main square is ringed by museums telling of the history of Mexican independence, as well as the birth and times of the Padre. 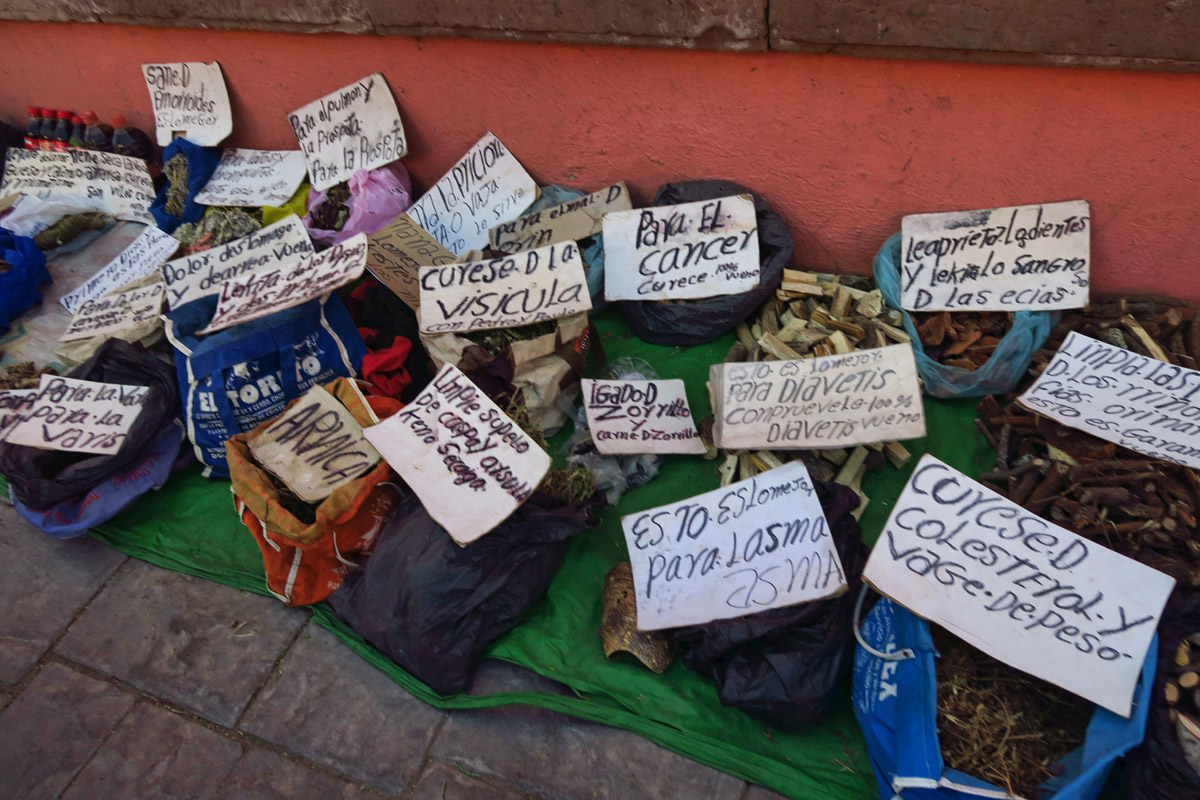 Herbal remedies, if you dare… 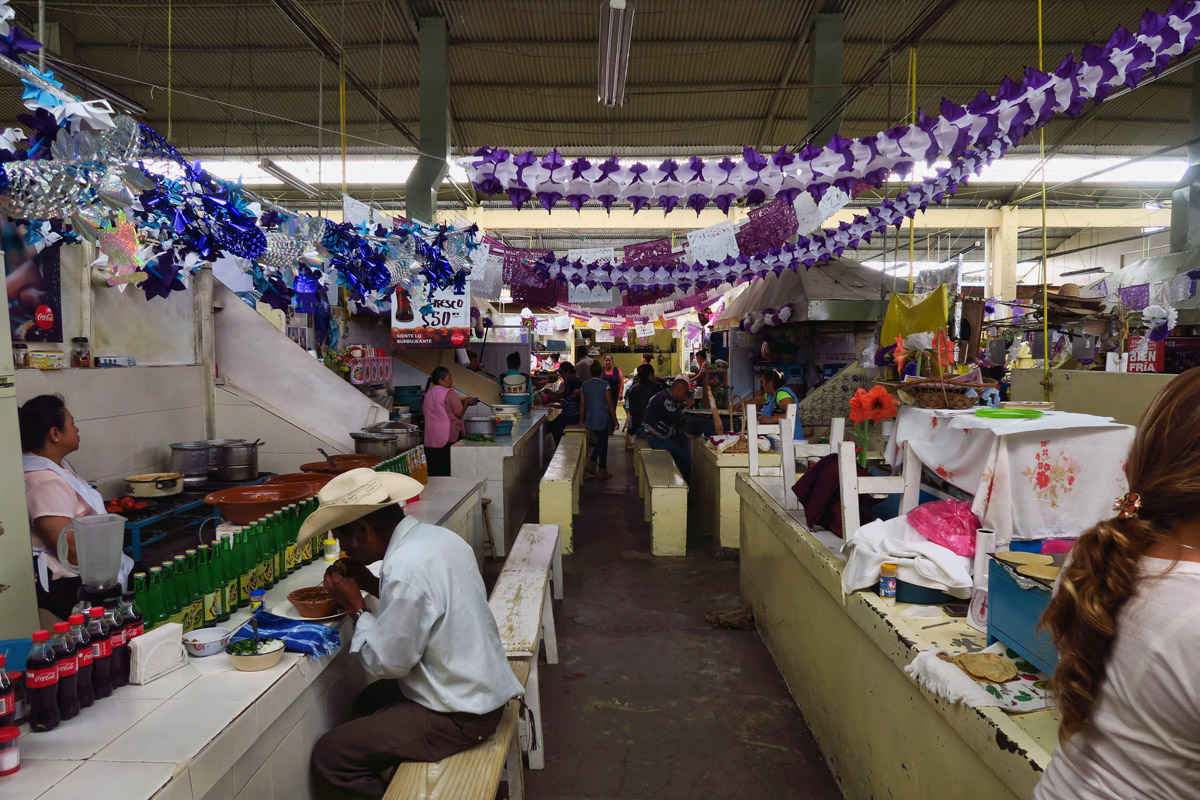 Food stalls inside the Mercado. 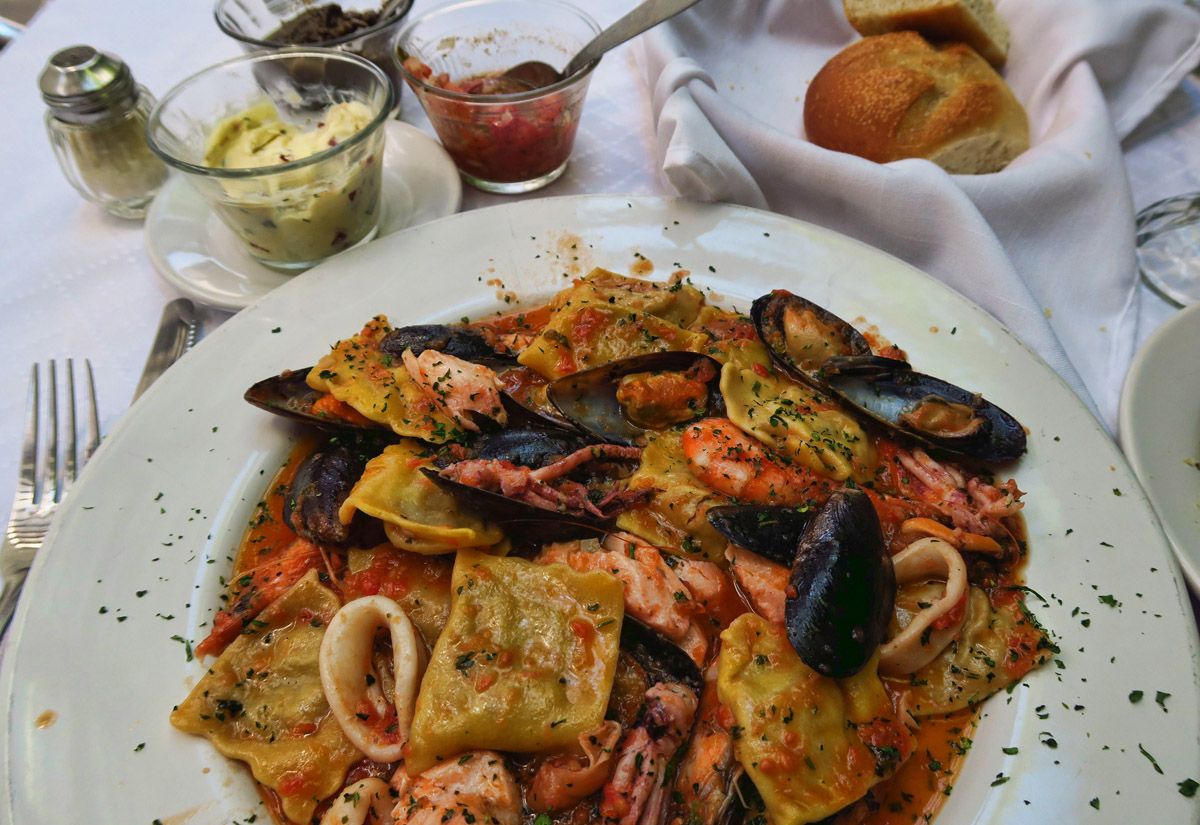 I broke ranks for lunch when the other five students said they were “going for a sandwich.” If it’s my first and last time to visit Dolores Hidalgo, I am going for TripAdvisor’s highest rated “DaMonica” for lunch, with Italian chef. Nice to have a break from tacos!

However, if there’s one thing that might eclipse the museum popularity, it would be the dueling ice cream carts lining the perimeter, with competing brands and flavors on every corner.  Not only do they compete for customers, but they also seem to try to outdo the other with bizarre flavors.   Most of these carts sell “nieves,” which is more like frozen ice, so it might not sound so bad when you think of flavors like Shrimp, Tequila, Michelada, and Chili since no real cream is involved.   It’s more like “shrimp on ice.”  But then add sugar, and well….no thank you. Some traditional flavors of ice cream are offered as well, with nuts and fruit flavors.   It’s possible to get a “probar” or a taste of each flavor, or a small sample in a cup for about a quarter. 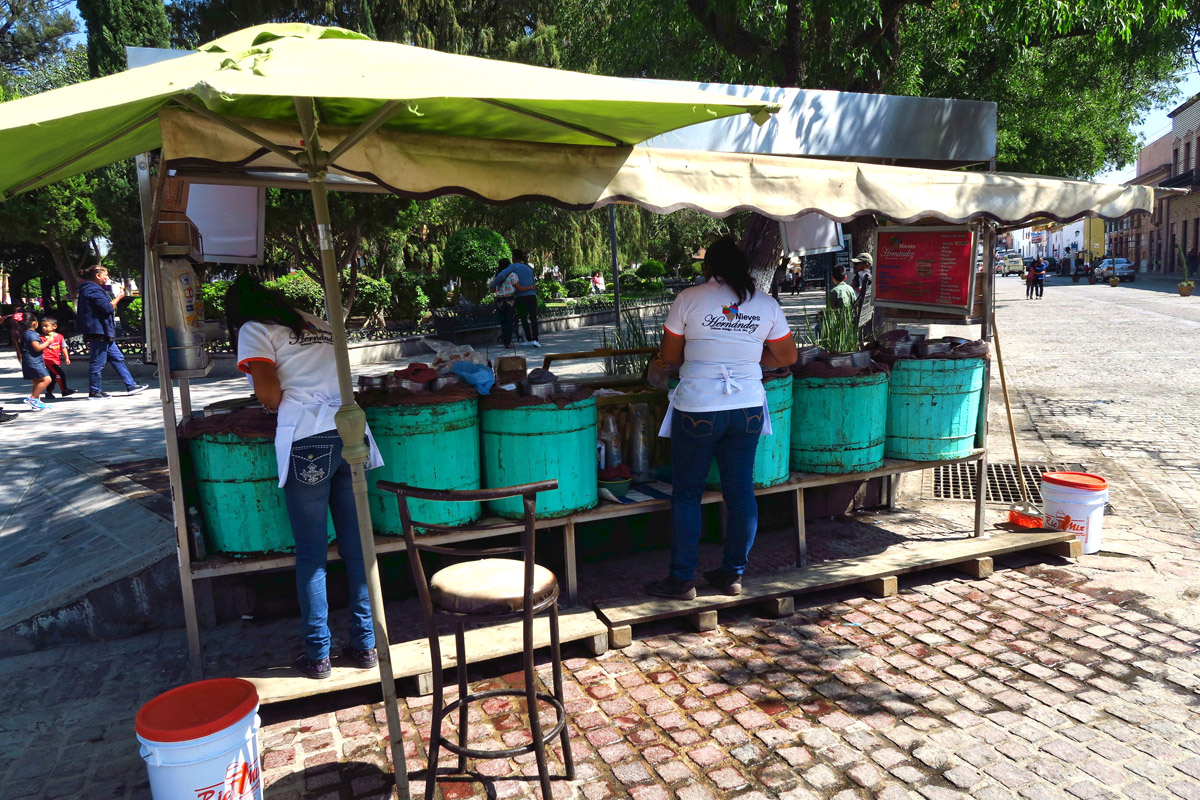 One of the many ice cream carts lining the Jardin. 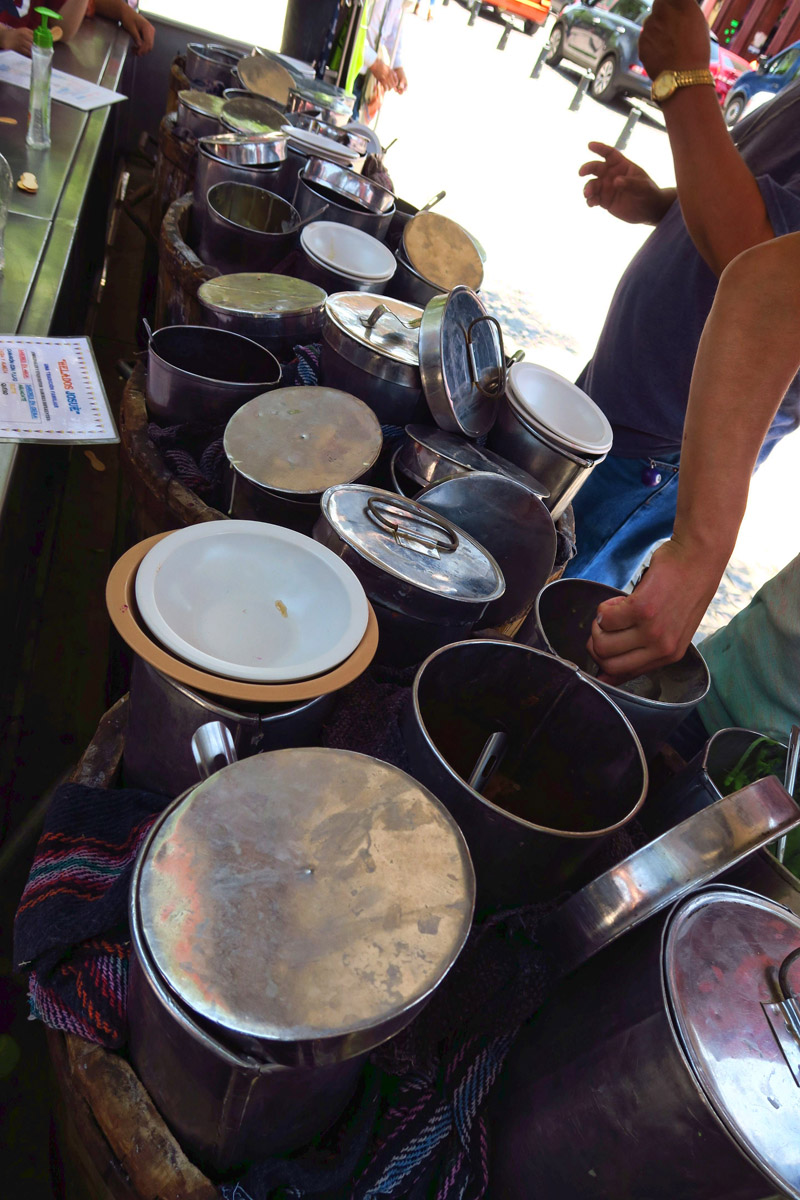 It’s incredible how they are able to keep the ice cream frozen in the heat of the day. 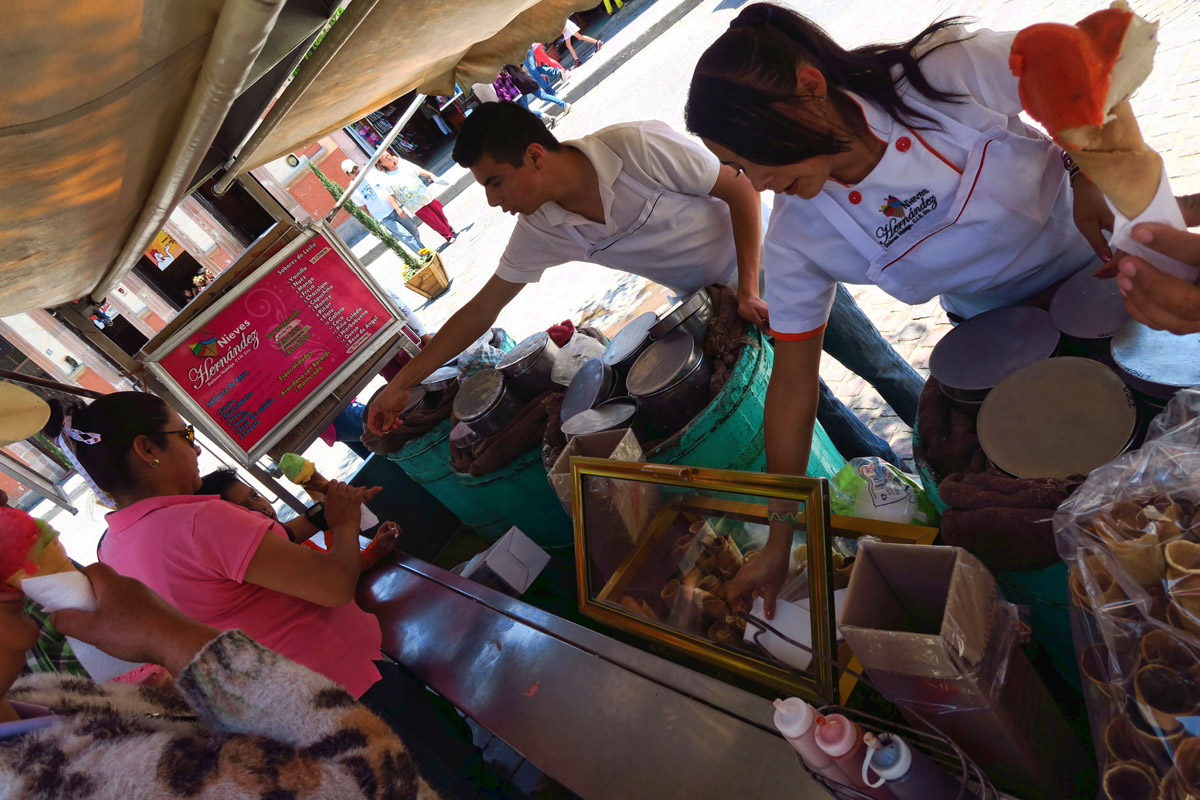 I try several of the more unique flavors;  Tequila and Michelada, but find none to my liking.  Just way too sweet, like frozen flavored sugar-water.  I’m not typically a “stick to the basics” type person.  You won’t ever find me ordering Vanilla in an ice cream shop.   But when it comes to Dolores ice cream, I’ll stick to the more mainstream….like my current Guanajuato favorite, Piña Colada. 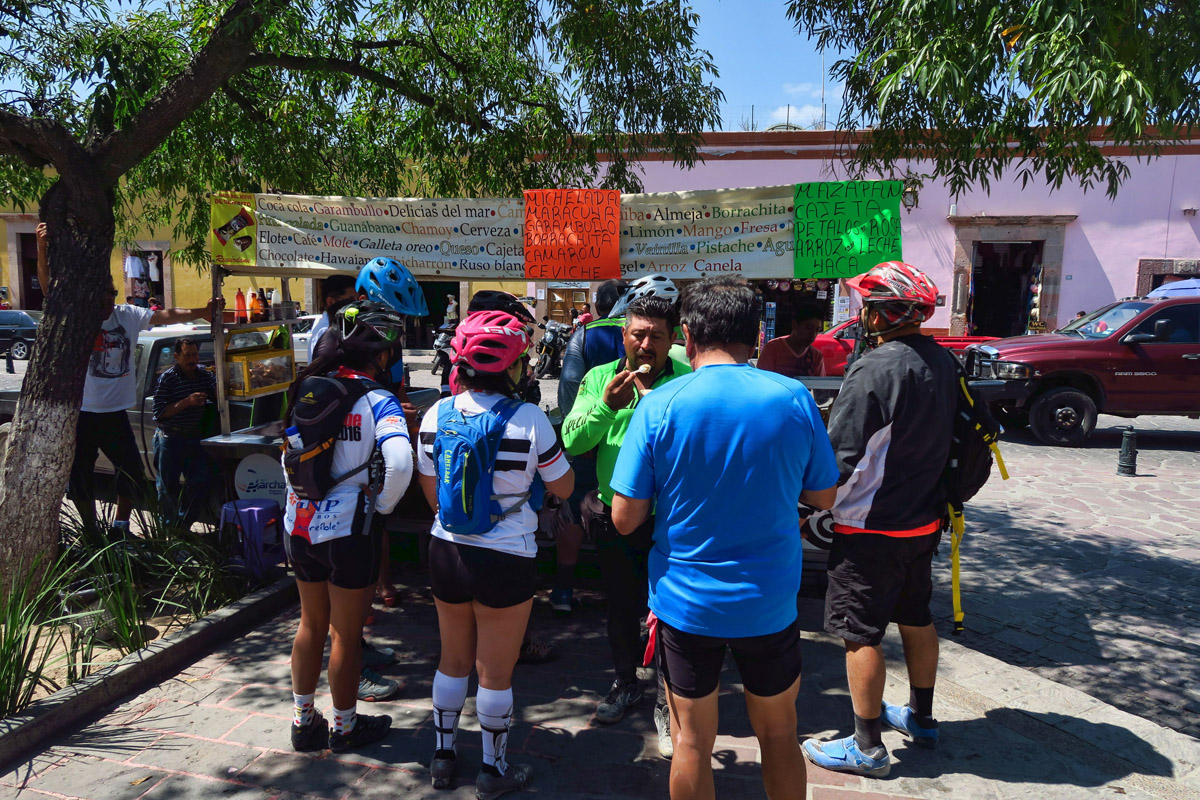 Local bike club stops at one of the more crowded ice cream carts. 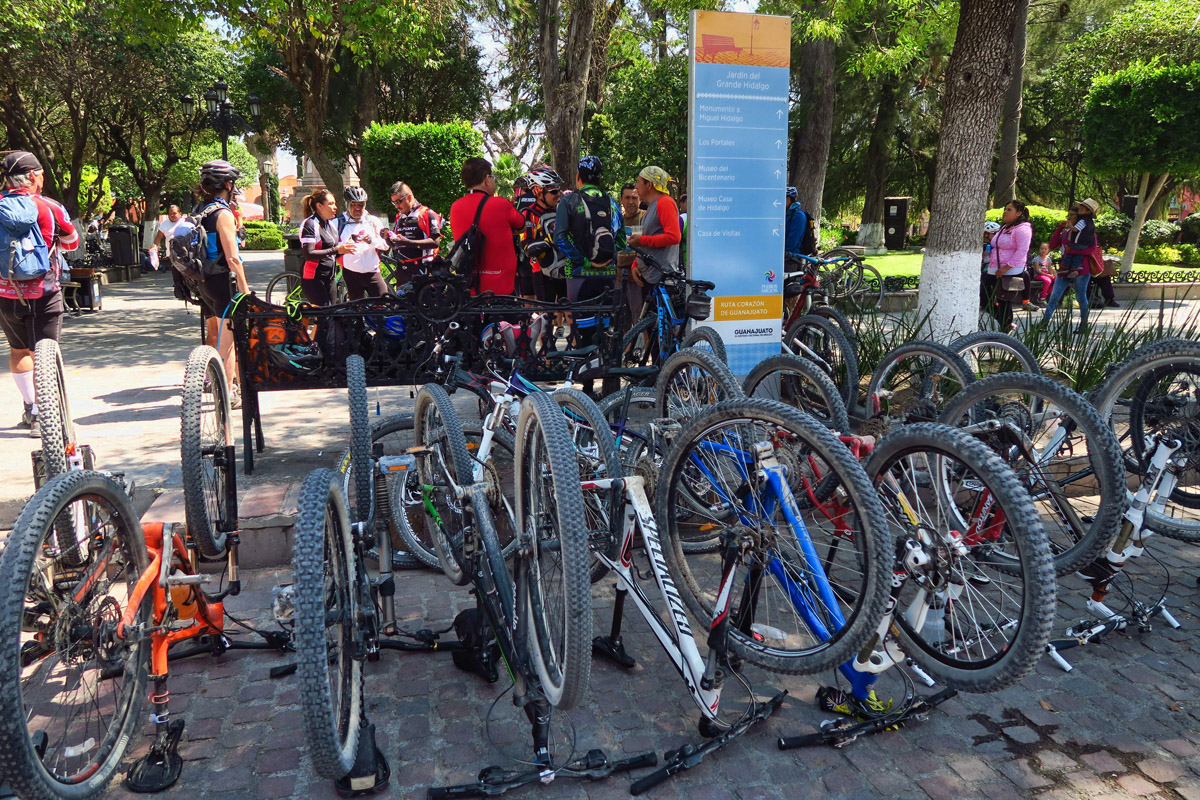 No bike racks? No problem! Just turn them upside down.

The third Dolores draw is the hand-glazed Talavera-style ceramics, again, another influence credited to Father Miguel Hidalgo who started a ceramics workshop as a way for the indigenous people to have a trade.  I came to Dolores Hidalgo expecting to see examples of this work being made, but instead of examples of hand-made ceramics turned with the potter’s wheel, it was more about molded, mass-produced products from tabletops to toilets.   If you’ve ever seen one of those tacky sloganed “It’s Sweeter in Cancun”  beer mugs in the shape of a boob where the opening looks like a nipple, chances are, it came from Dolores.  Like the ice cream, interesting to contemplate, but not my taste. 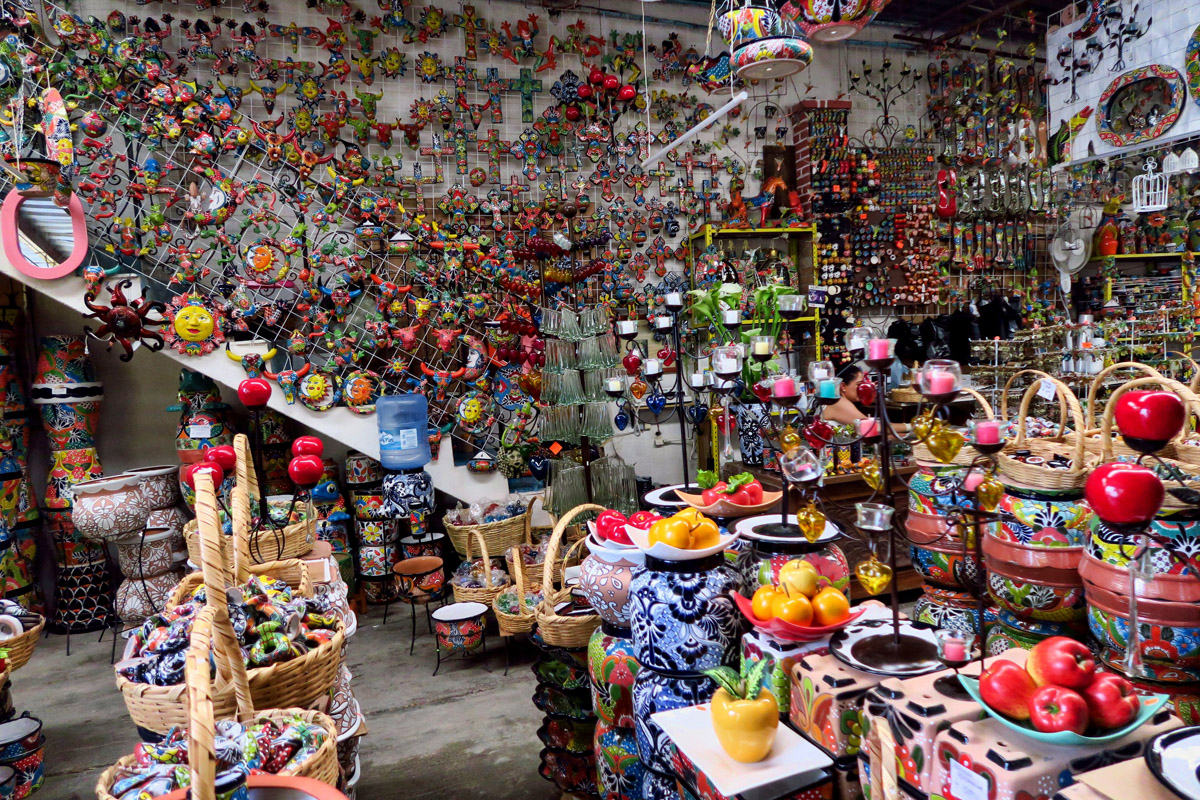 The Talavera ceramic shops seem a bit more “junky” than I had imagined. 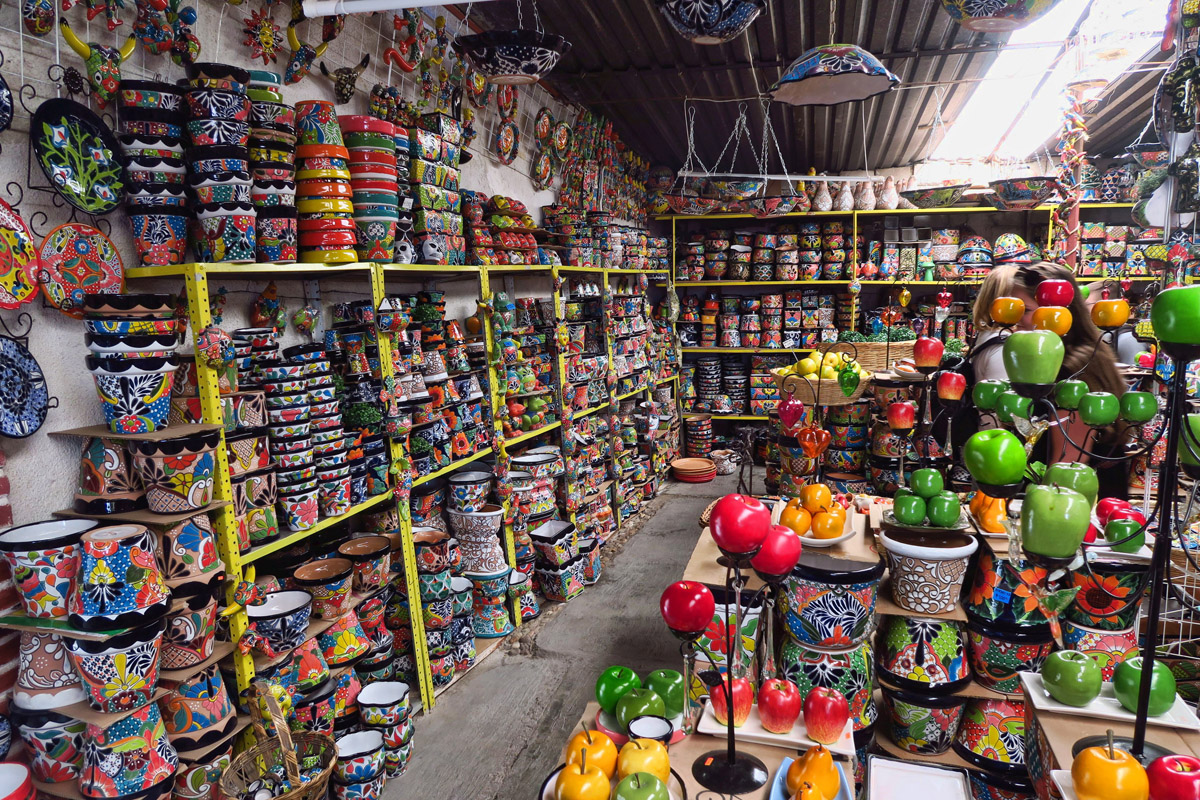 I’d hate to take inventory in these shops! 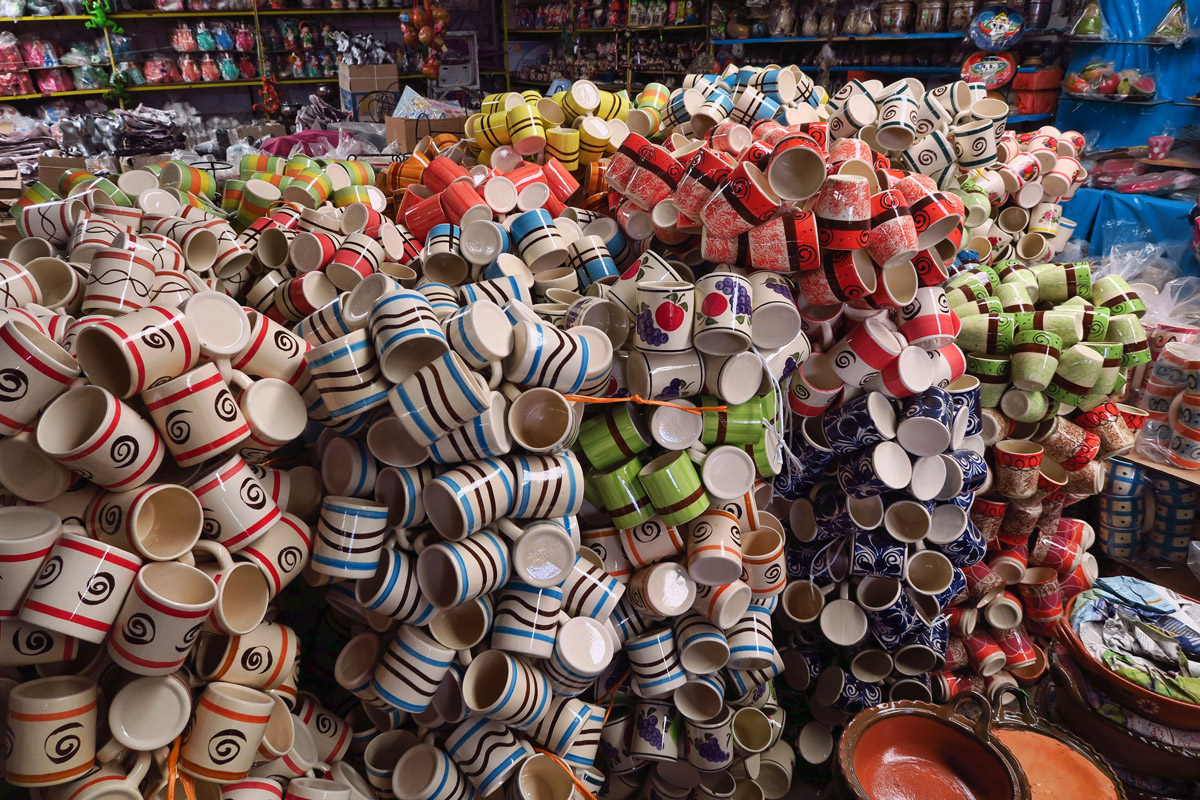 In case you need a hundred coffee mugs. 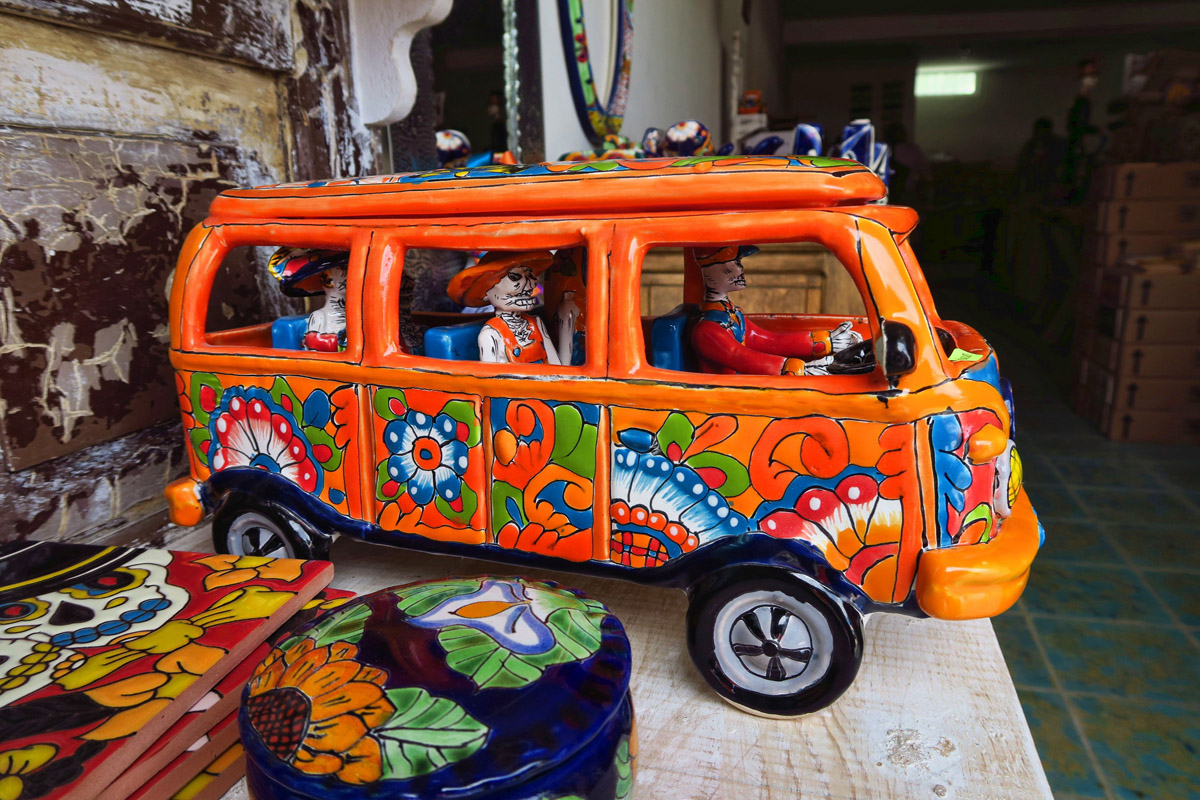 Mexican Catrinas, or the Grateful Dead? 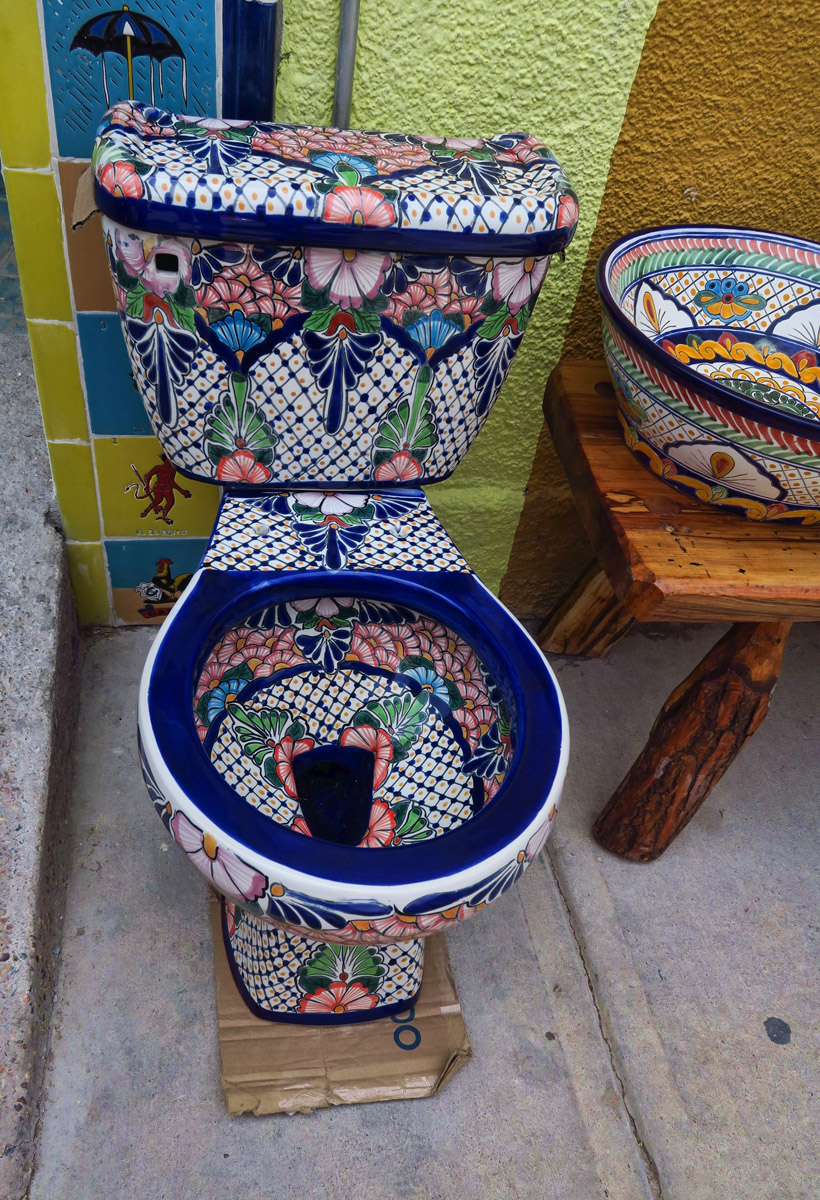 This might be taking Mexican “pottery” a bit too far…

I’ve long had a curiosity about the town of Dolores Hidalgo, as I do about most of Mexico’s Pueblo Magicos. But one afternoon was enough to satisfy my curiosity, if not my taste…

5 thoughts on “Tastes and Takes on Dolores Hidalgo”