Continuing on south down Hwy 100 through the long sliver of the state of Vermont, October begins to redeem itself.  For all the autumnal splendor that Montpelier and Stowe were lacking, I find in the Green Mountain National Forest of southern Vermont.  Seems the further south I drive, the more beautiful it becomes…completely contrary to my expectation for New England. 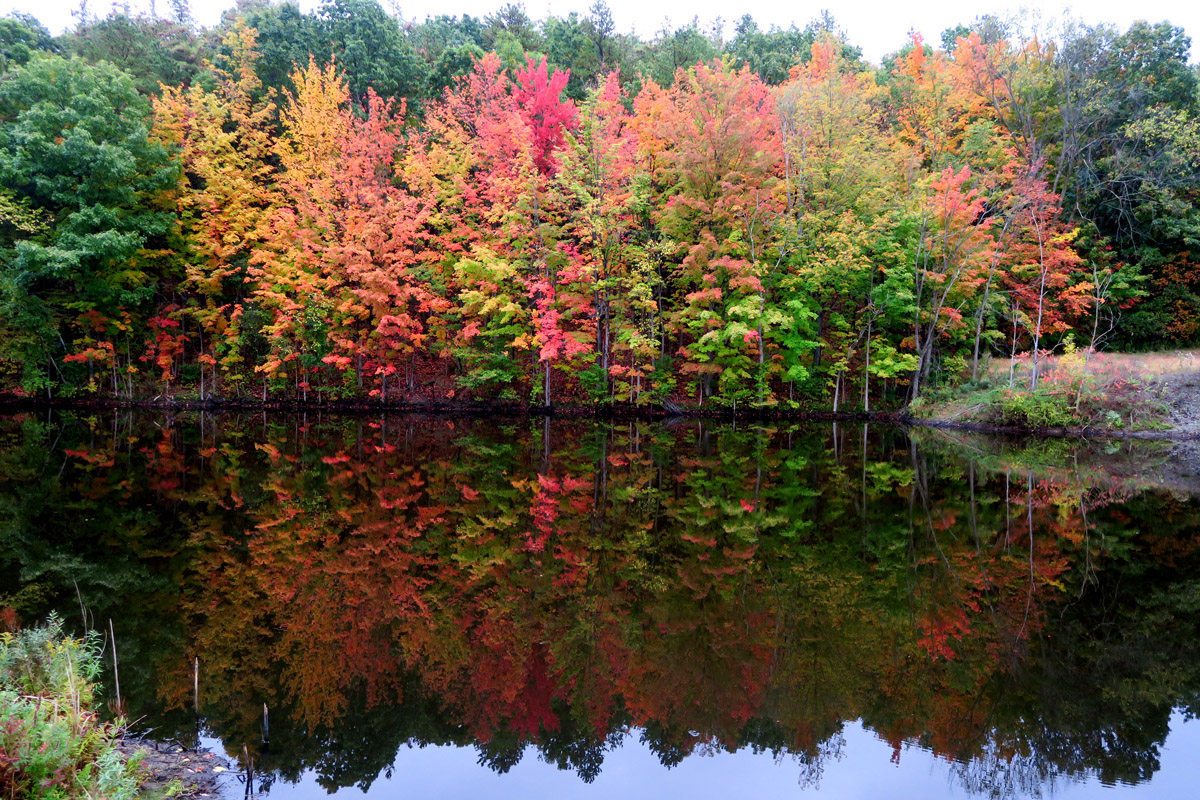 Near the Vermont/New York State Line 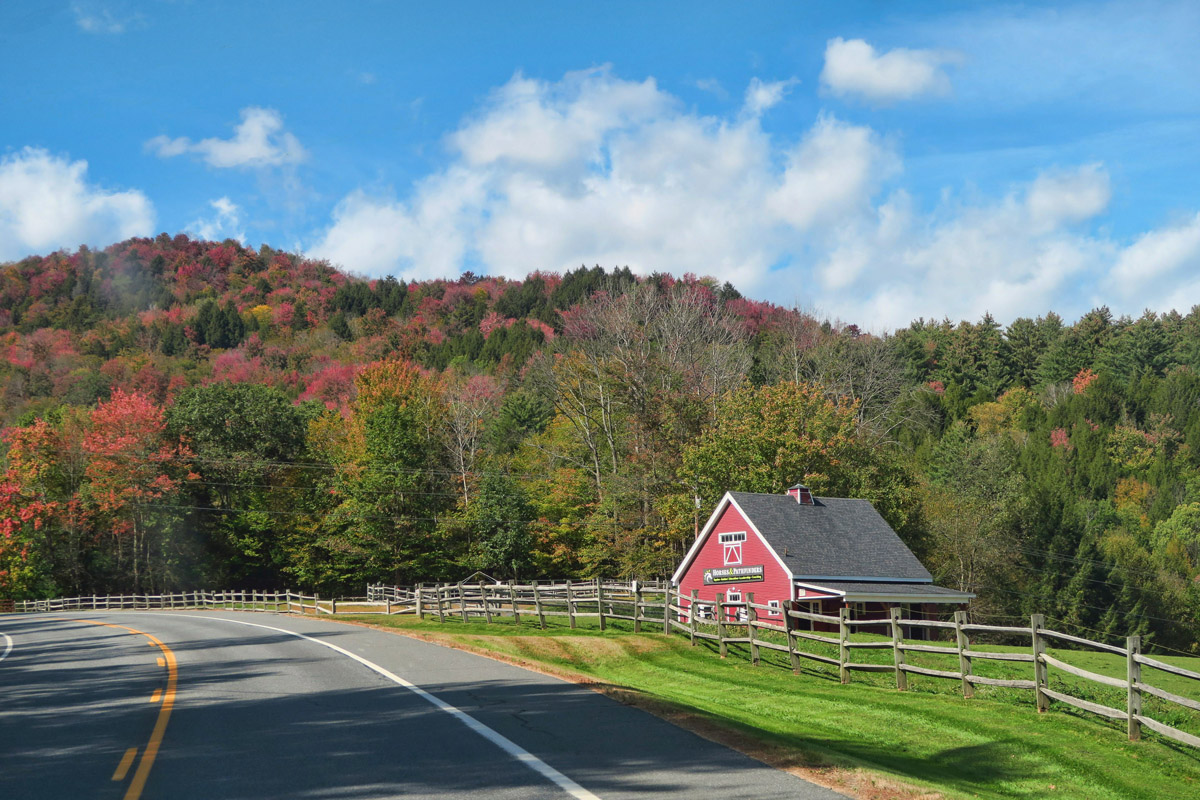 Hwy 100, which follows the edge of state forest lands. 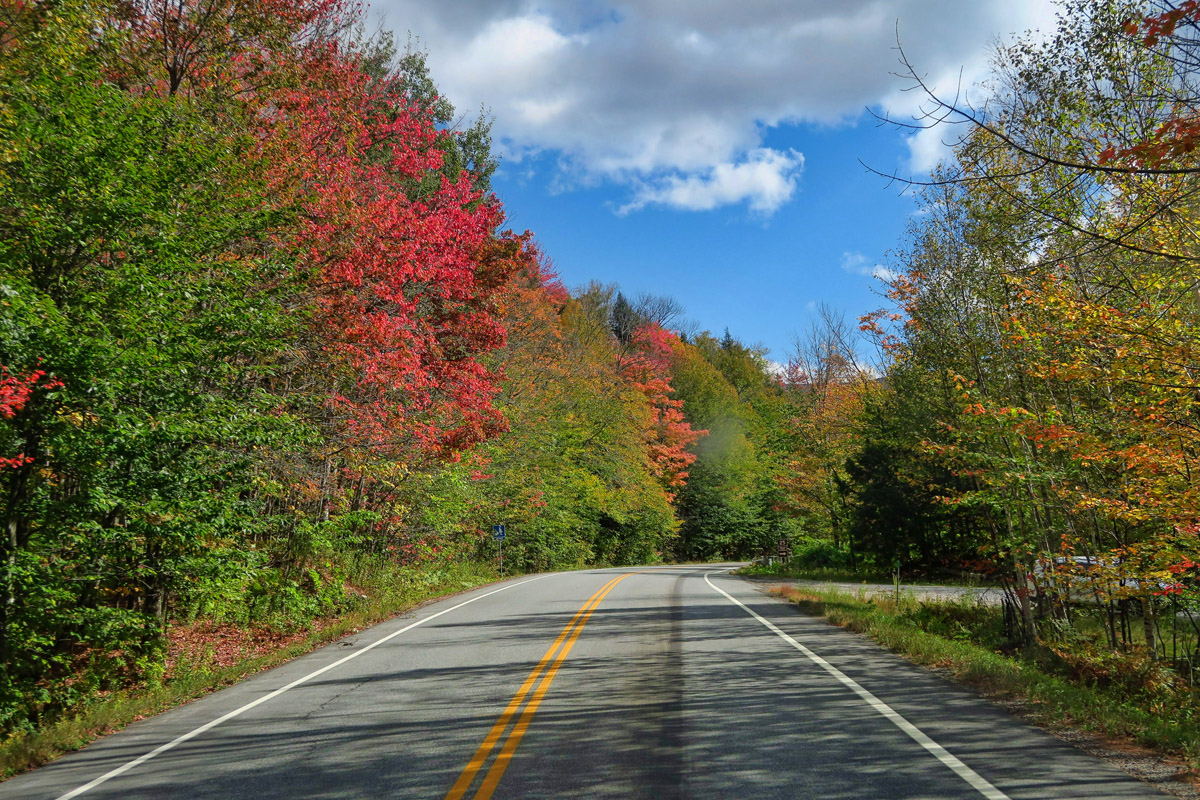 Highway 100 is just what I had hoped for on a drive through Vermont…no one there!

The drive down Hwy 100 is “quintessential Vermont” with big red barns dotting the roadside and small quaint Inns decked out with ornamental pumpkins and cornstalks.  I am treated to those evocative scenes of winding two-lane, throwing up freshly fallen leaves as cars drive by like flower girls strewing rose petals at a spring wedding. 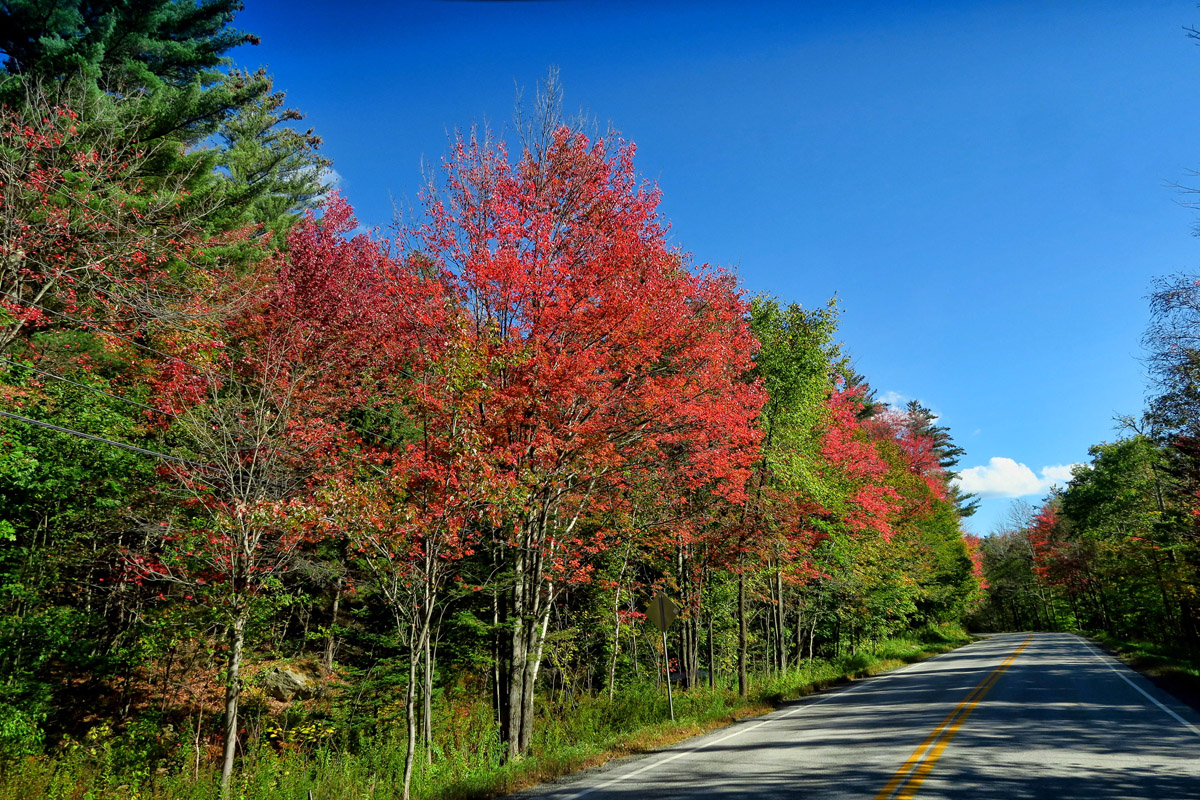 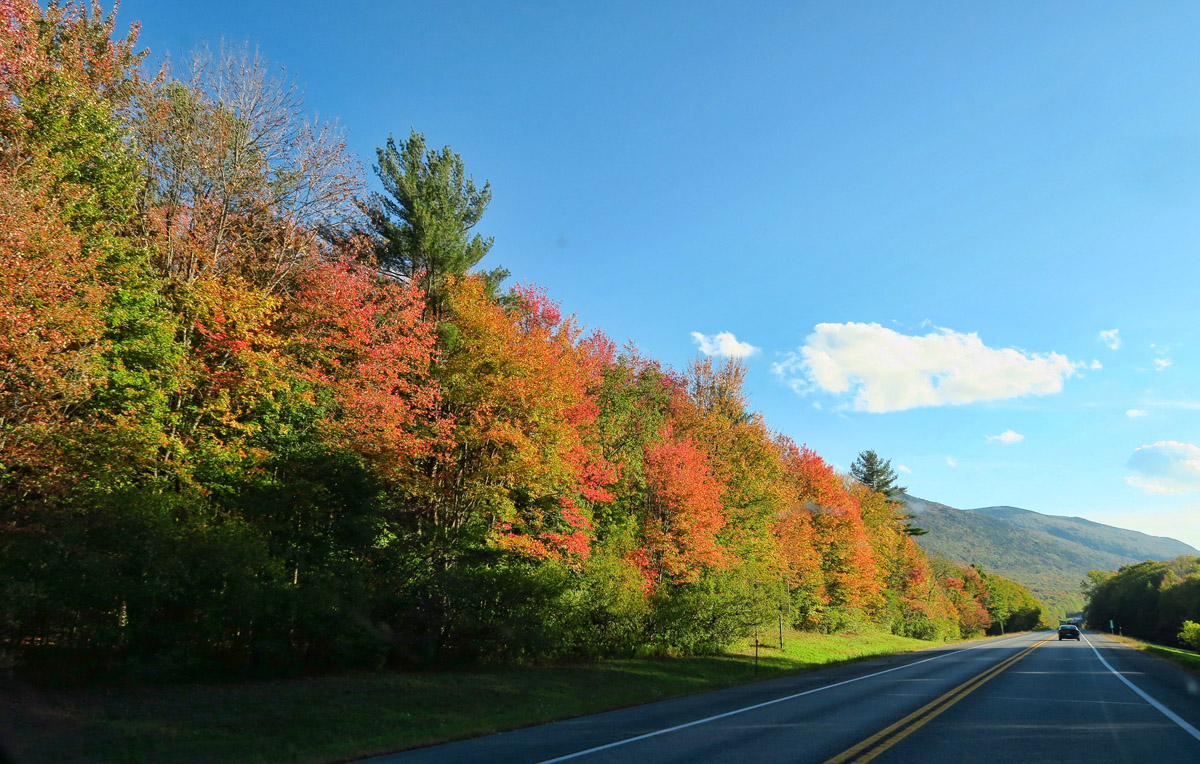 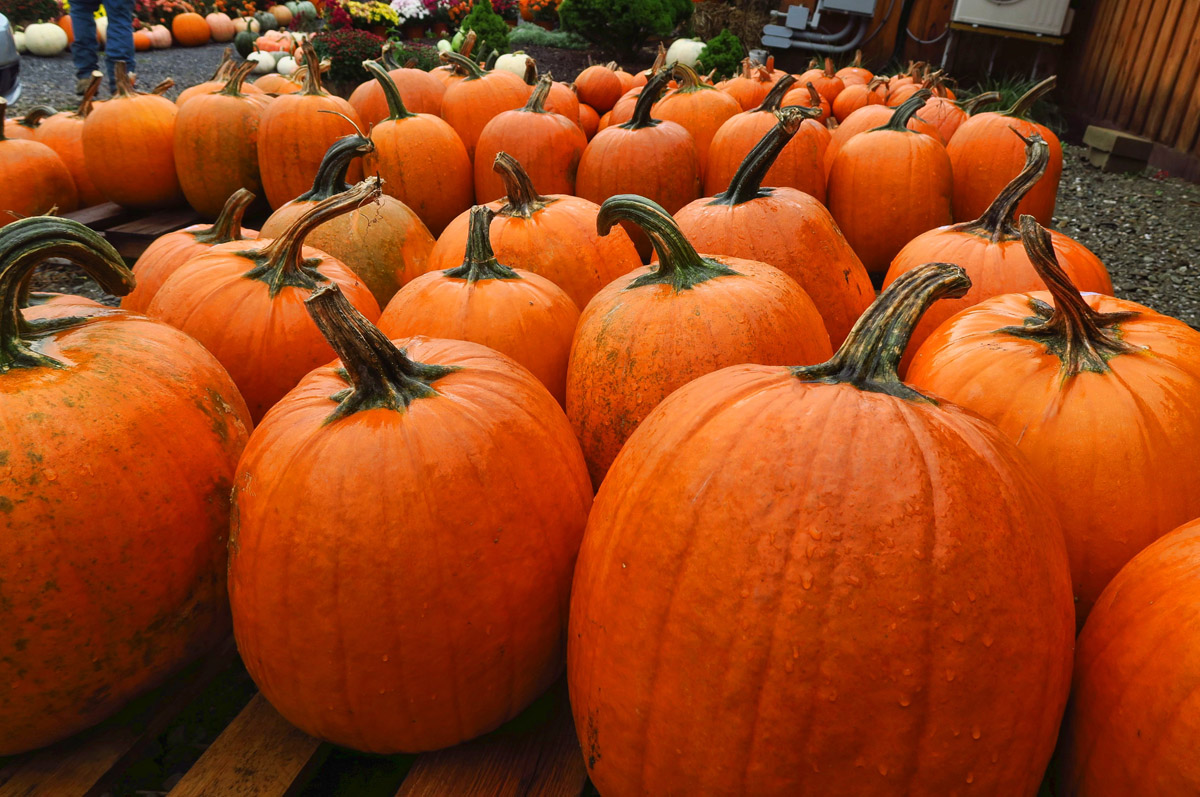 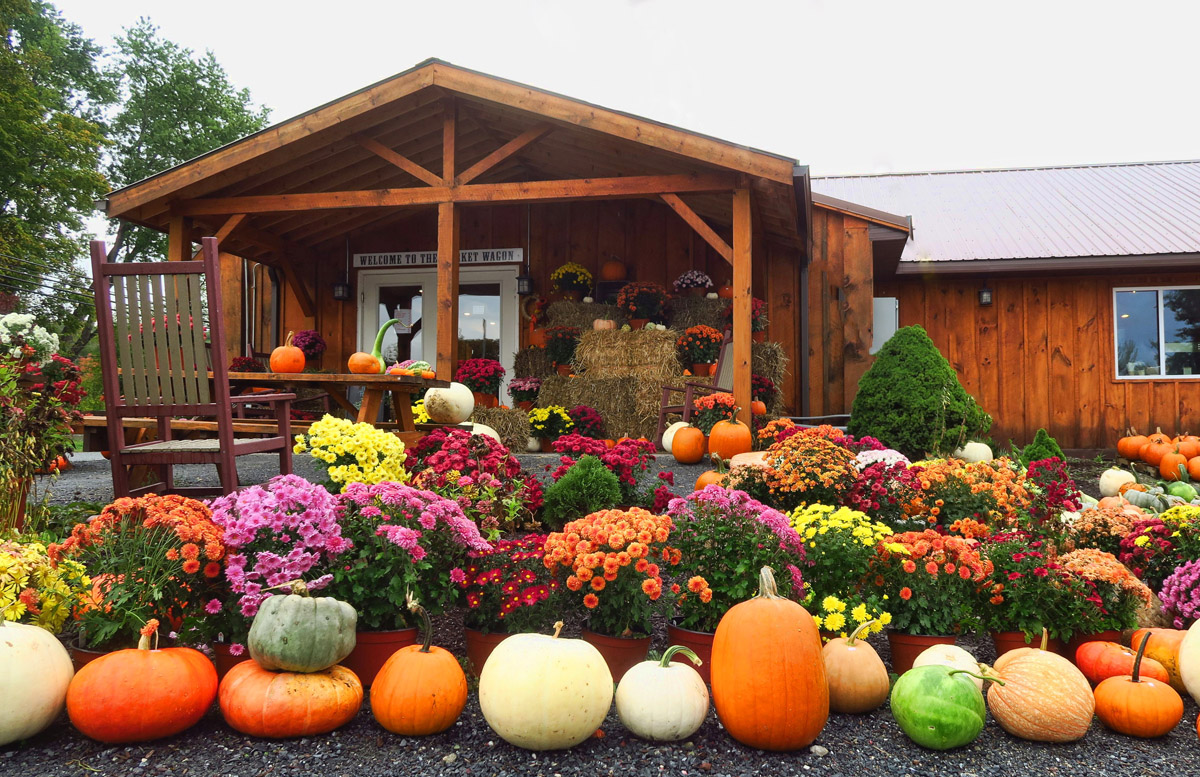 October, my favorite month of the year, when all the senses are stirred.  The sounds of crispy rustling leaves crunching beneath my boot heels.  The musty wet smell of decomposition fills the air as nature rids her branches of the old, shoring up for winter before making way for the new.  The brilliant splotches of color on the hillsides dotted with Mother Nature’s paintbrush dipped in her palatte of jewel-toned hues.  The feel of lone leathery leaves picked up, their veins studied like tiny road-maps along the trail.  And the taste of caramel corn and hot apple cider lingering sweet and salty on the tongue.  It’s the season when I finish the last bottle of chilled white wine in the fridge and bring out the full bodied reds.  The month when all great poems were written;  “October’s Bright Blue Weather,” by Helen Hunt Jackson, “Nothing Gold Can Stay,” by Robert Frost…the only two poems I ever memorized in their entirety.   Oh, how I love October! 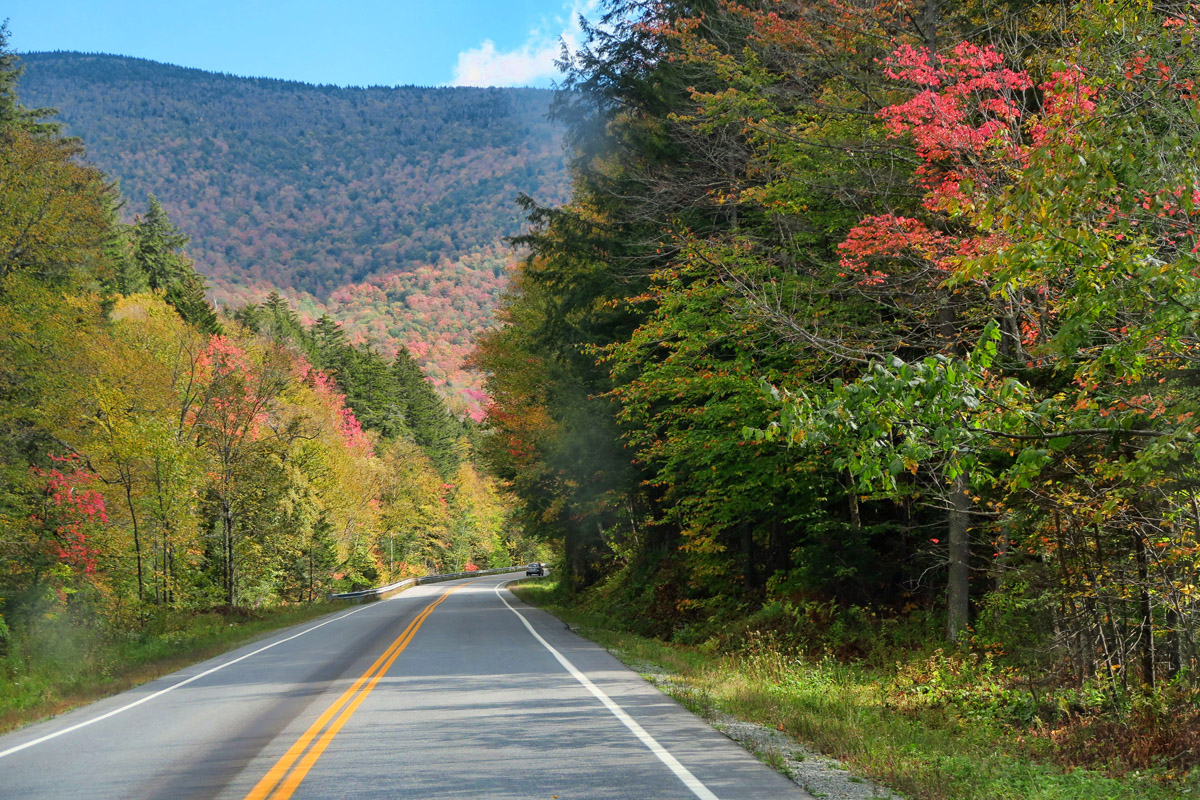 Highway 100 passes through the Vermont ski resorts of Sugar Bush, Killington, and Pico. 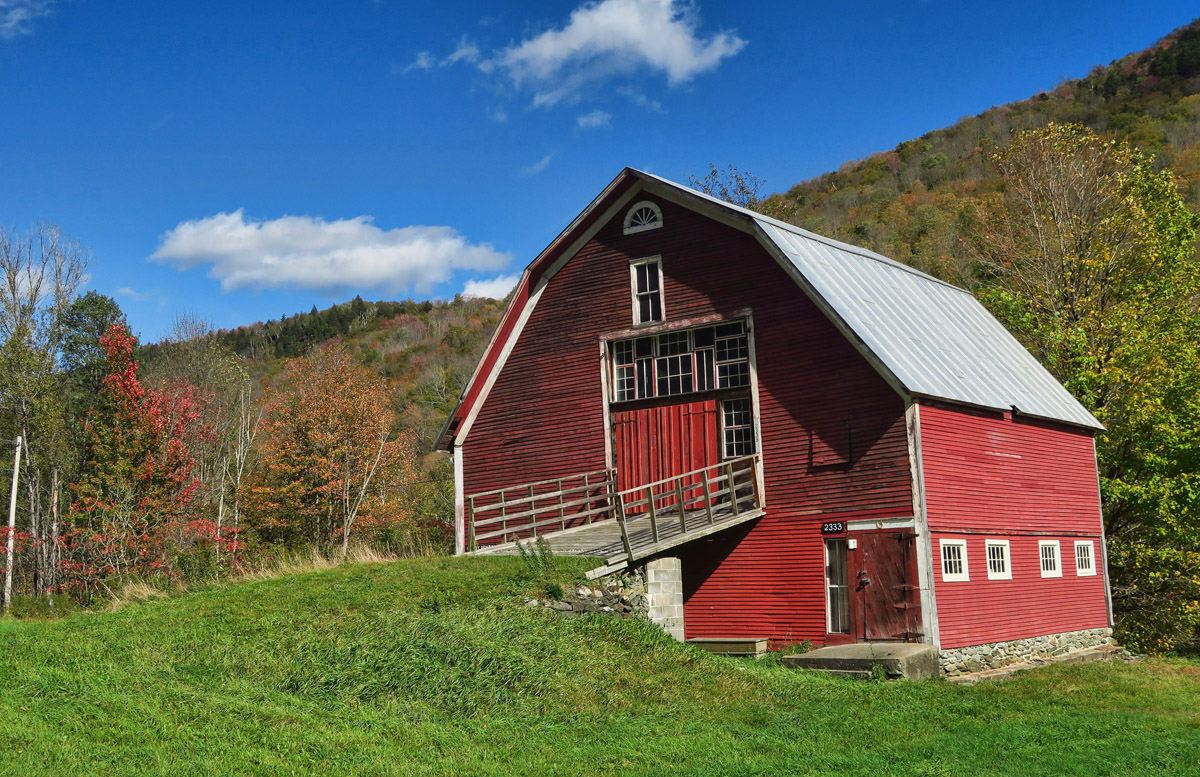 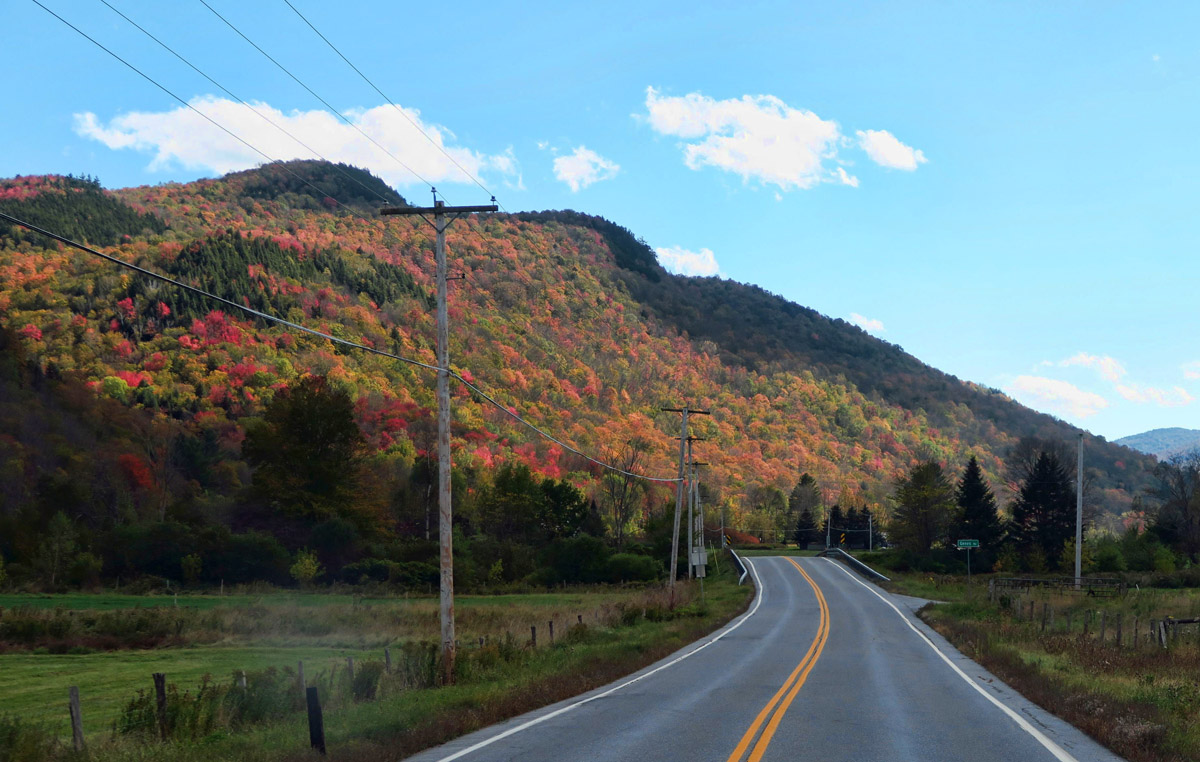 The hillsides are still not exactly a riot of color, but more so than northern Vermont.

I enjoyed driving Hwy 100 through the heart of the quaint towns of Vermont, but one of my favorites was Bennington, a designated “Vermont Main Street Alliance” participant, making the effort to preserve its historic downtown area and support small businesses.  Ironically, Bennington is one of the largest “towns” in Vermont (as opposed to cities,) yet it maintains a small town ambiance.  This is in part to a “big box bylaw,” capping the size of retailers and enforcing that a Community Impact Study be conducted prior to building any new retail stores.

Bennington also maintains its rural quaint feel by promoting and preserving its historic covered bridges.  Vermont claims over 100 covered bridges throughout the state, with five of them in Bennington County, three of which are within the city limits. 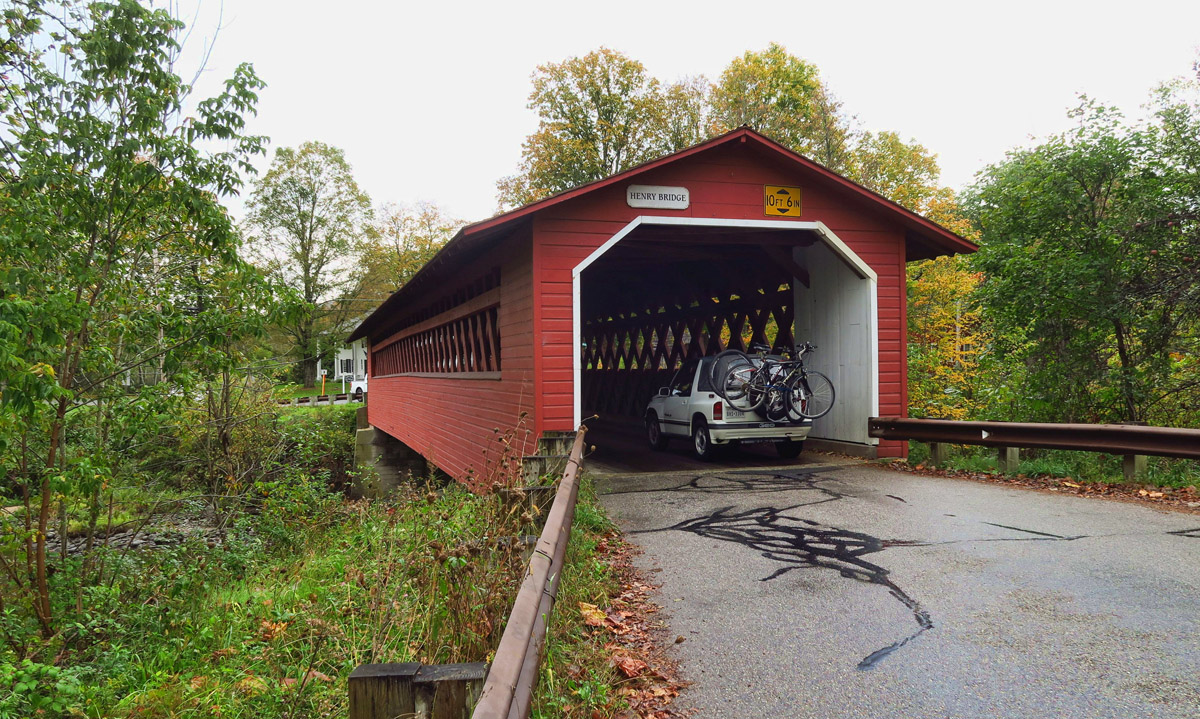 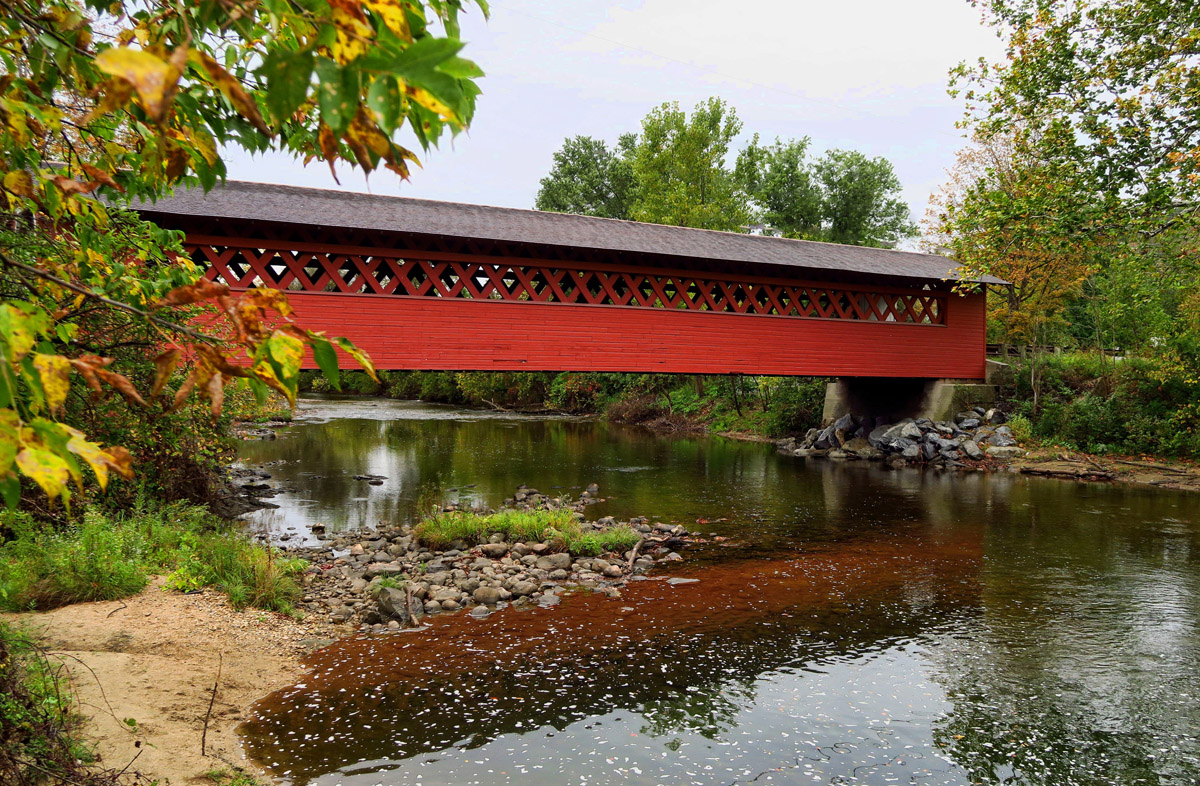 All three bridges are of similar design, built across the Walloomsac River, and can be driven across, making it a fun loop drive (long as you’re not in the 12ft tall Winnie!) 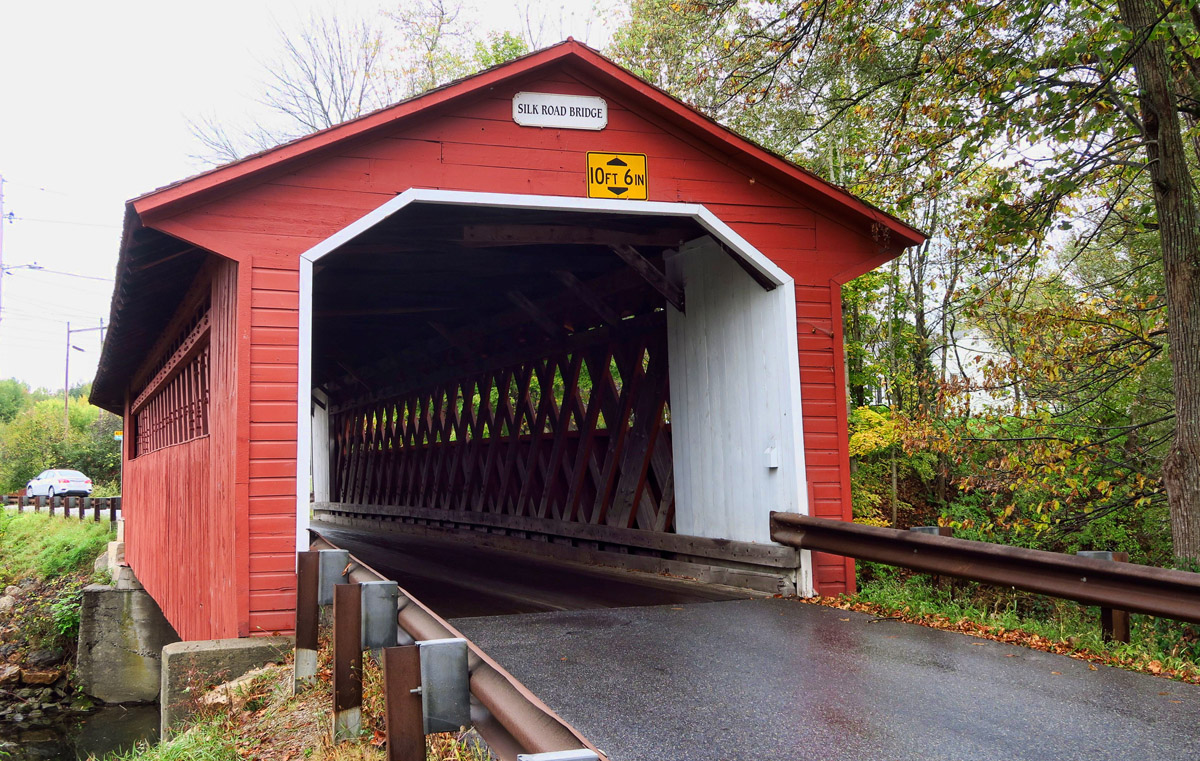 But my favorite thing about Bennington is the fact that it was once home to one of my favorite fellow admirers of October, none other than Robert Frost.   How could the author of such prose as in “The Road Not Taken” not be near and dear to the heart of every wanderer?   Couple that with his poems about my favorite time of year, autumn, and it’s easy to see why he’s one of my favorite poets. 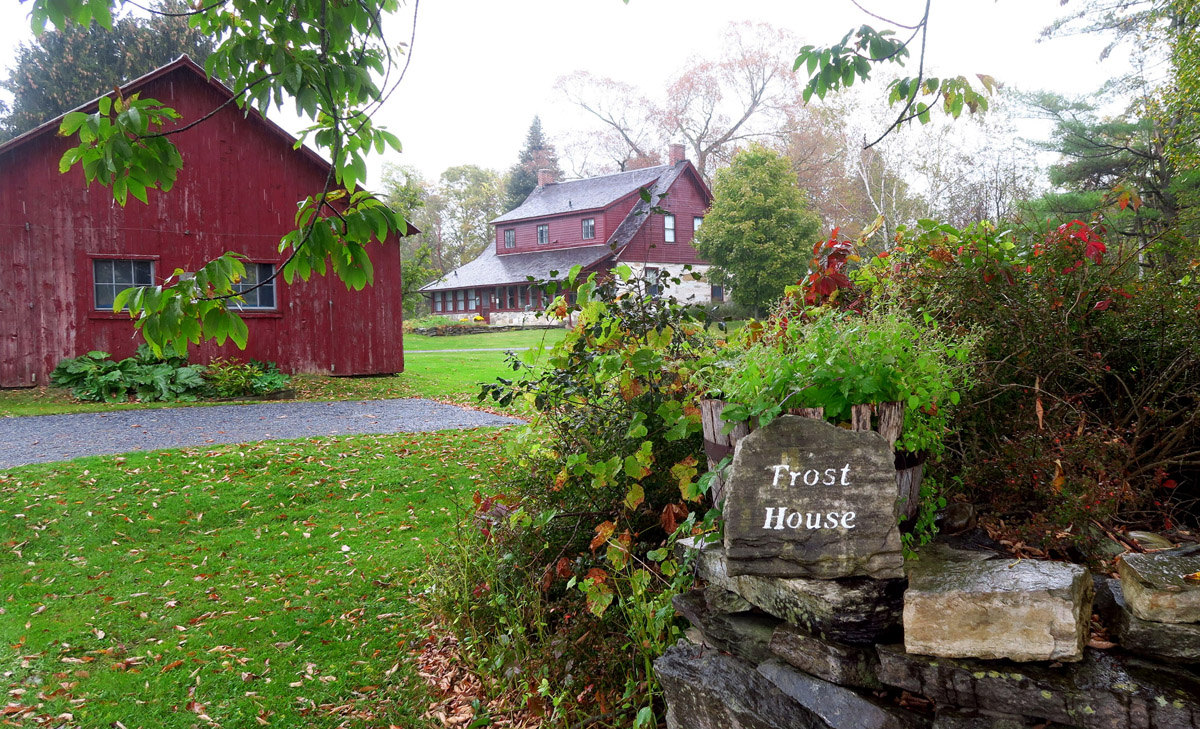 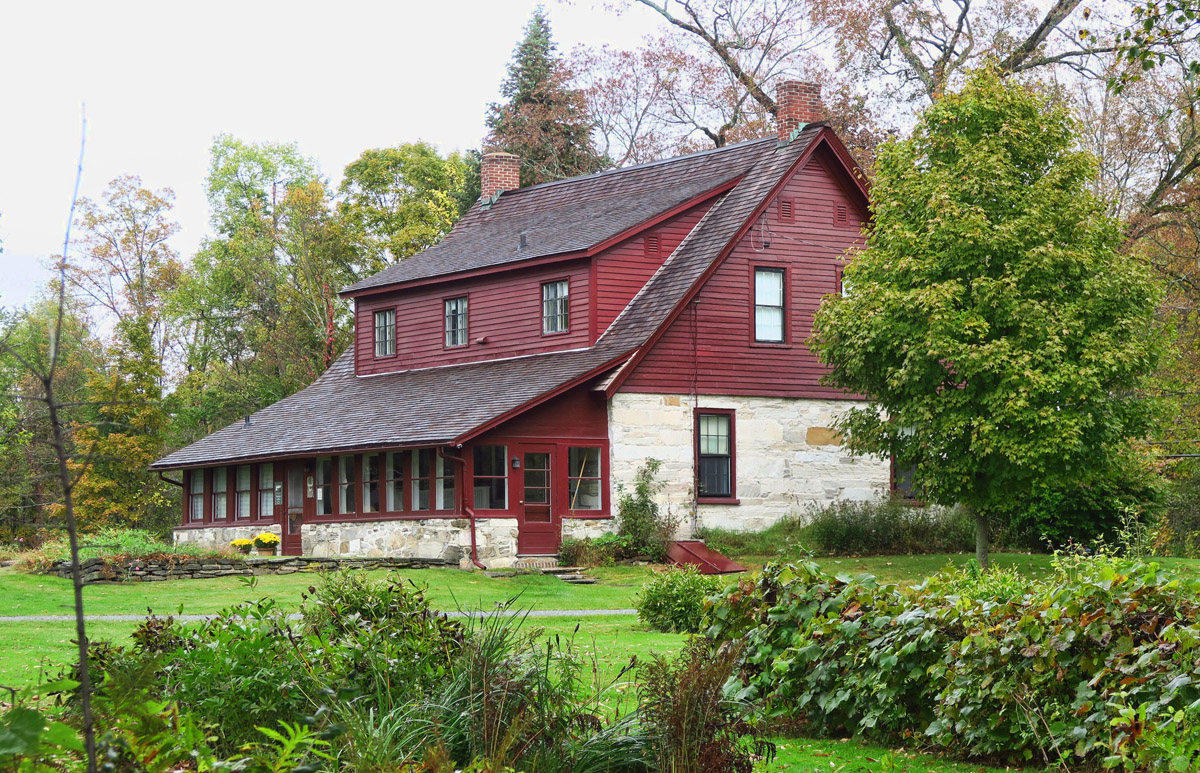 Frost made his home in Shaftsbury, just outside of Bennington from 1920 to 1929.  It was here that one of his most famous poems was written, “Stopping by Woods on a Snowy Evening,”  the last two lines being the notorious “And miles to go before I sleep.”   This poem, a part of his 1923 New Hampshire collection, earned Frost his first of four Pulitzer Prizes.  The Stone House Museum, while filled with many family photos and history of Frost’s life, has an entire room dedicated to the desk and window where this Snowy Evening poem was written.  (Sorry, no photos allowed inside the home.) 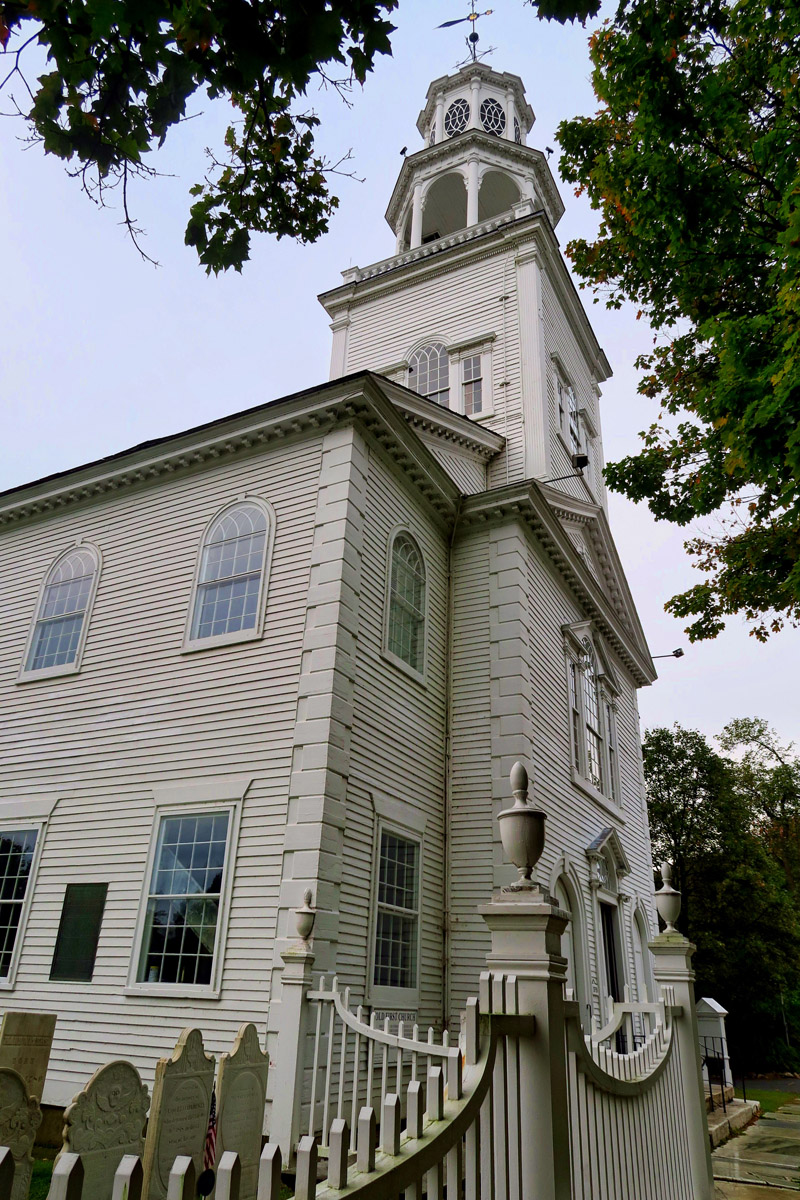 The Old First Church, congregation was organized in 1769, Vermont’s first church dedicated to separation of church and state. 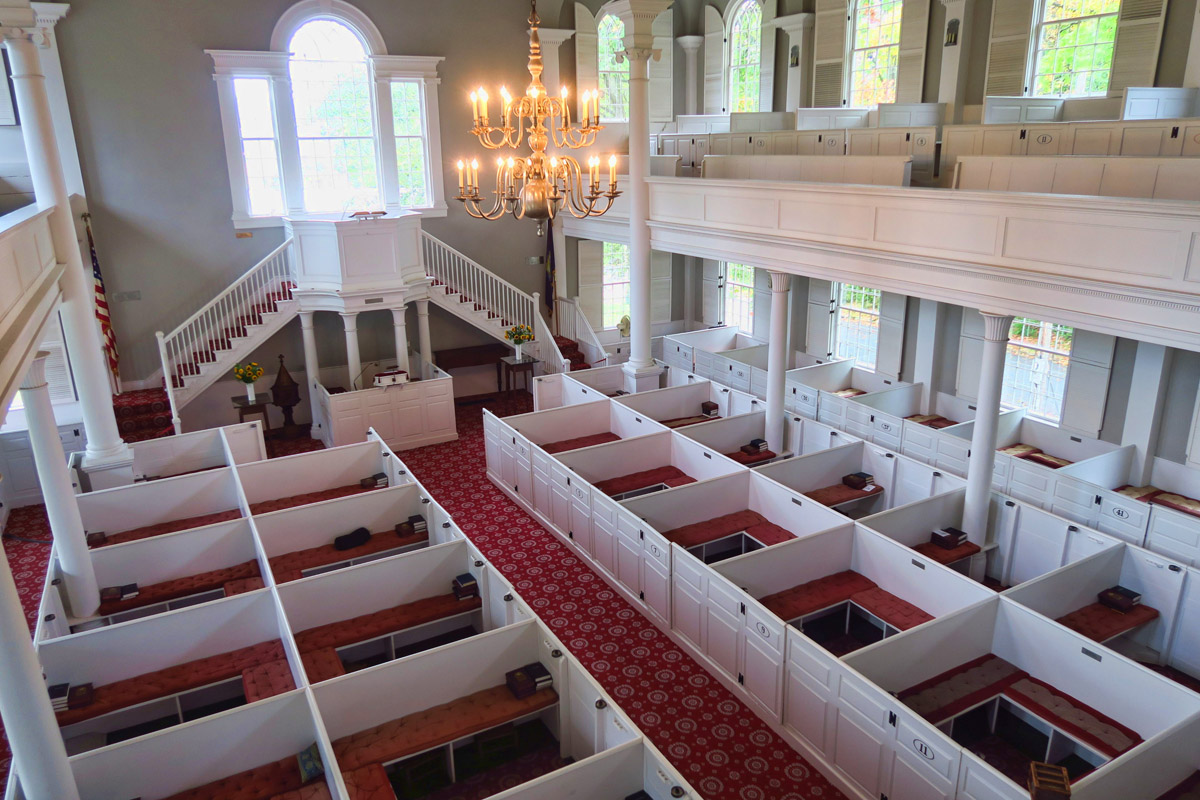 Inside the sanctuary are “box pews,” which were sold to townspeople. Families would sit together in the boxes which protected from drafts in the cold New England winters. 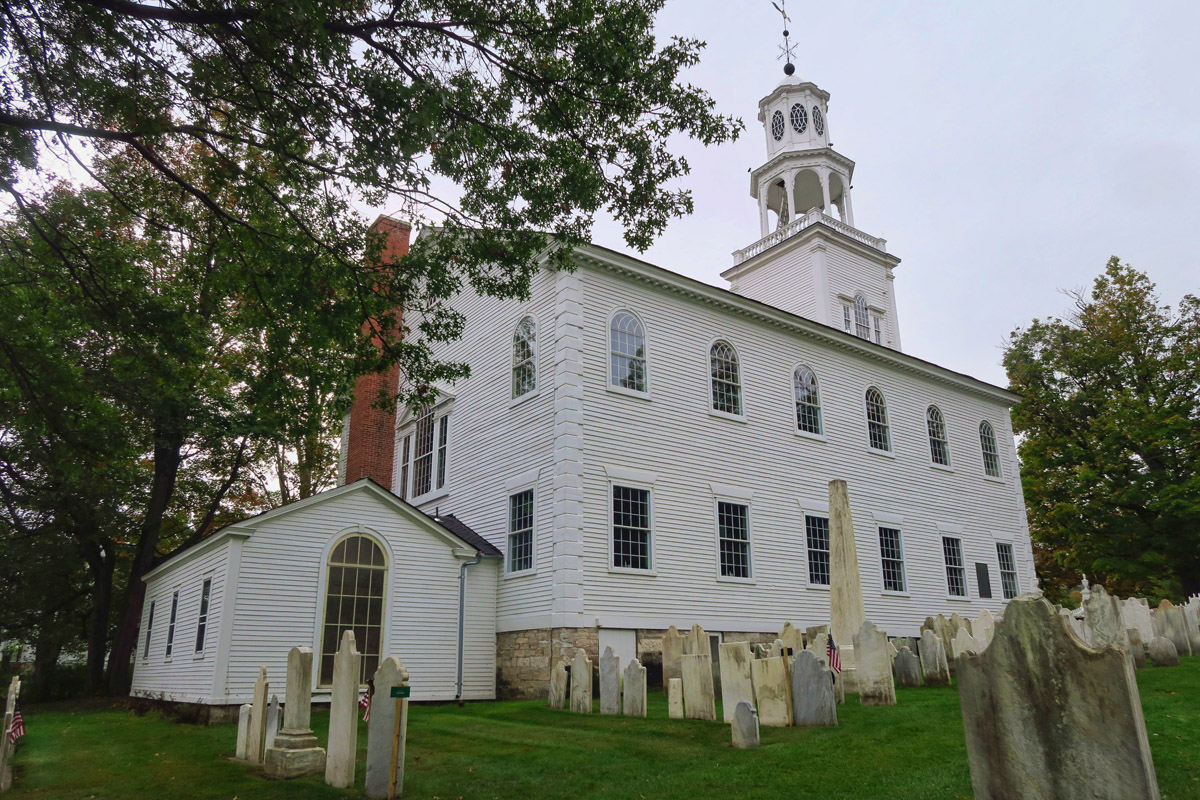 The cemetery known as “Vermont’s Sacred Acre” next to the church was founded in 1766. 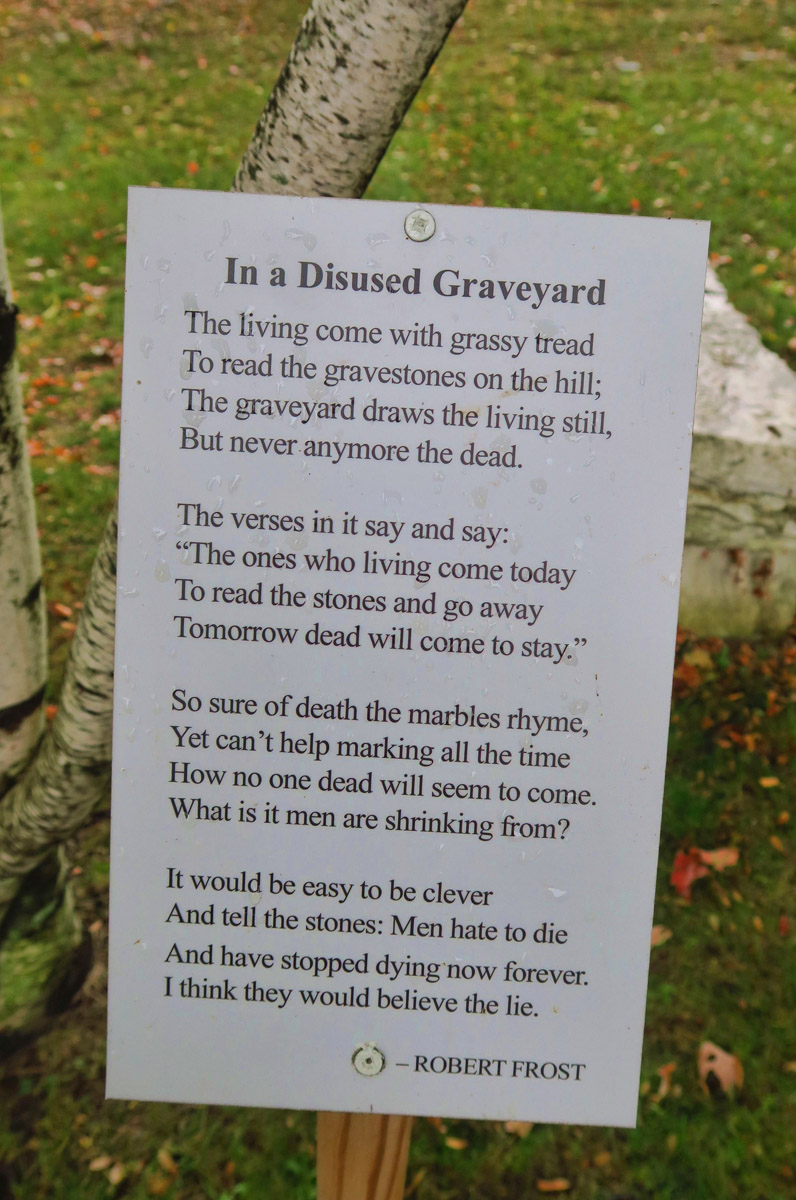 Frost poem “In a Disused Graveyard”  is displayed alongside his grave site. 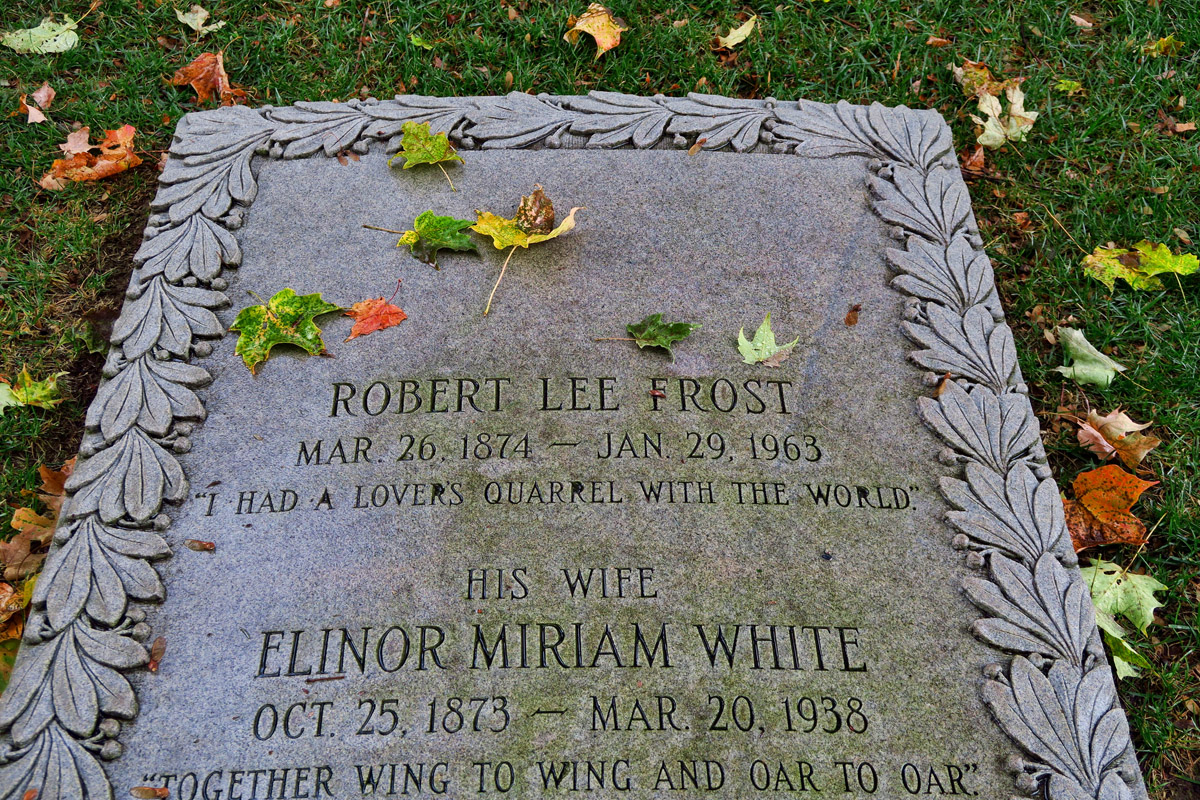 “I had a lover’s quarrel with the world.”

Frost now “sleeps” alongside his wife in the Old Bennington Cemetery, where as expected, his tombstone reflects his own poetic epitaph, “I had a lover’s quarrel with the world.”  Just as one might stop to consider their own decisions when two roads diverge in a yellow wood, or the metaphor for one’s own mortality when realizing “Nothing Gold Can Stay,” Frost’s epitaph leaves one to ponder the story of their own love affair with the world… 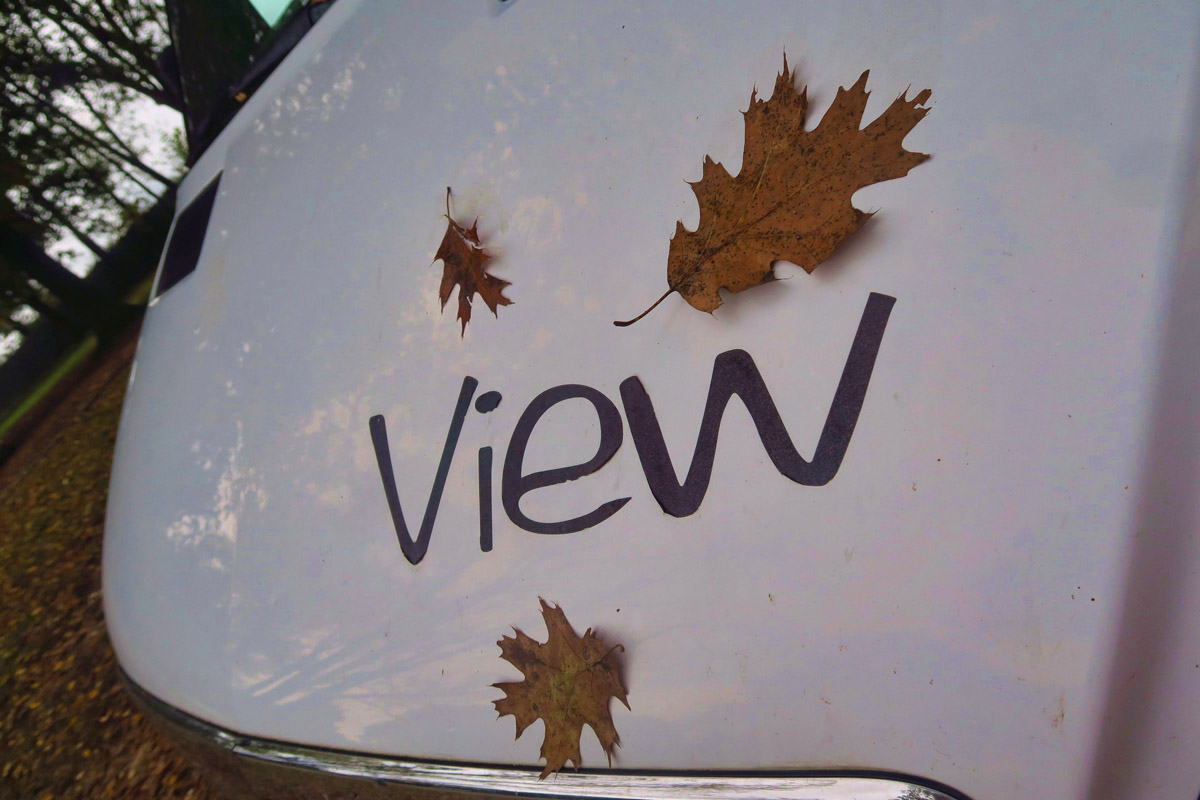 October ~ by Robert Frost
O hushed October morning mild,
Thy leaves have ripened to the fall;
Tomorrow’s wind, if it be wild,
Should waste them all.
The crows above the forest call;
Tomorrow they may form and go.
O hushed October morning mild,
Begin the hours of this day slow.
Make the day seem to us less brief.
Hearts not averse to being beguiled,
Beguile us in the way you know.
Release one leaf at break of day;
At noon release another leaf;
One from our trees, one far away.
Retard the sun with gentle mist;
Enchant the land with amethyst.
Slow, slow!
For the grapes’ sake, if they were all,
Whose leaves already are burnt with frost,
Whose clustered fruit must else be lost—
For the grapes’ sake along the wall.