I didn’t think I would blog again.   Once I stopped and looked at it from “the 30,000 ft view,” it seemed like just more social media servitude that seems to have taken over much more of my life than I like to admit.   I began to question was I still being honest with myself that I blogged solely for the sake of preserving memories?   Or had it become a social crutch to keep me from feeling isolated in my chosen nomadic lifestyle?    An excuse to spend time on the laptop that could be better spent outdoors or reading a book? 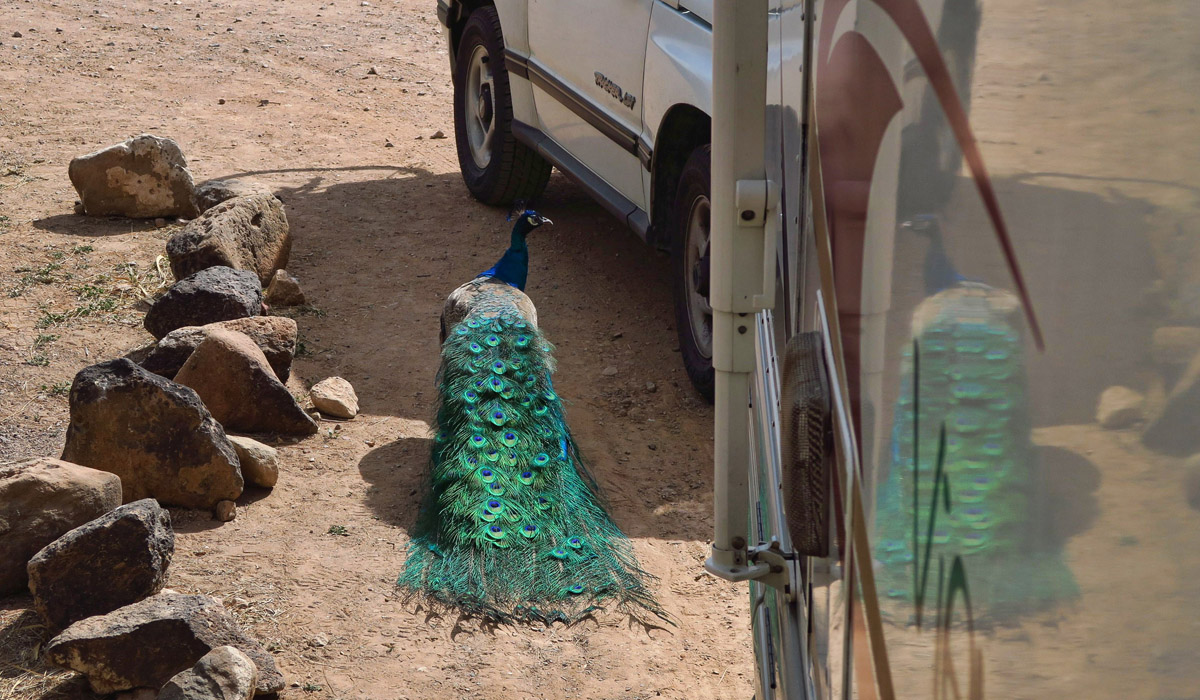 When’s the last time you stuck your head out the door to find a peacock?? 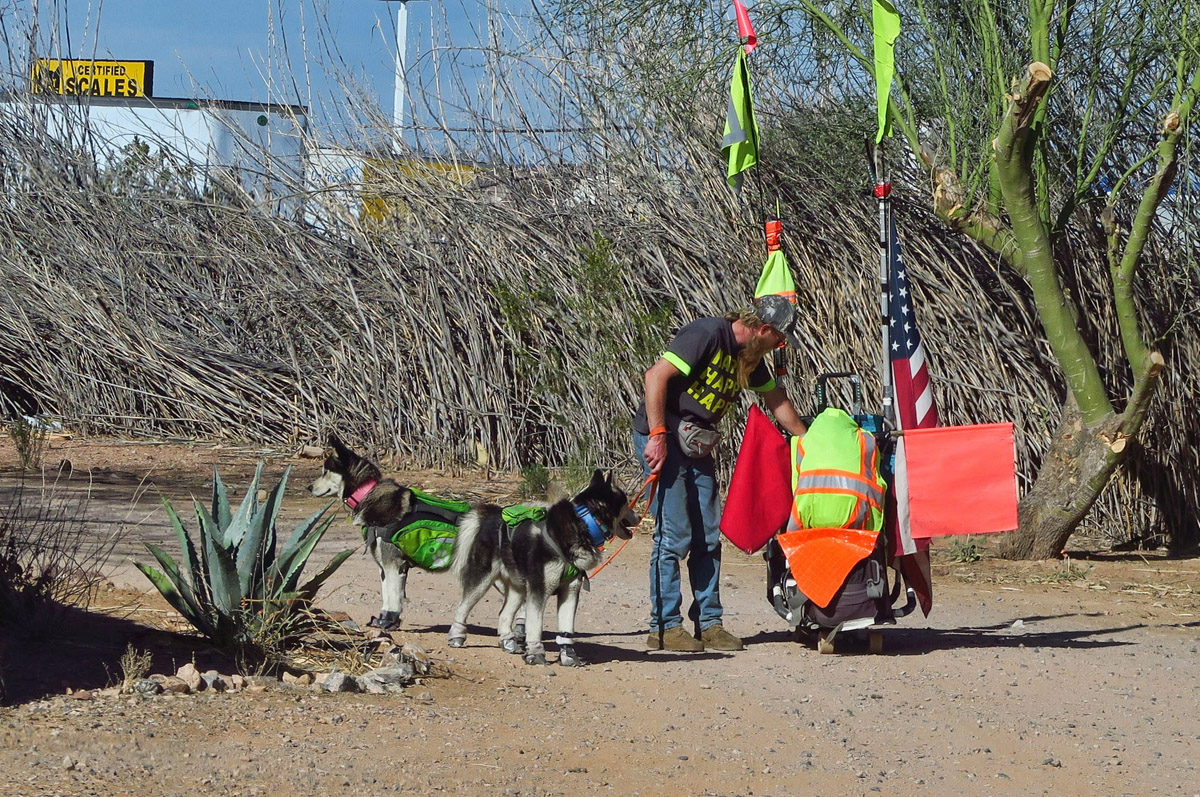 This guy’s transportation is a wheeled cart behind two sled dogs…in Arizona. 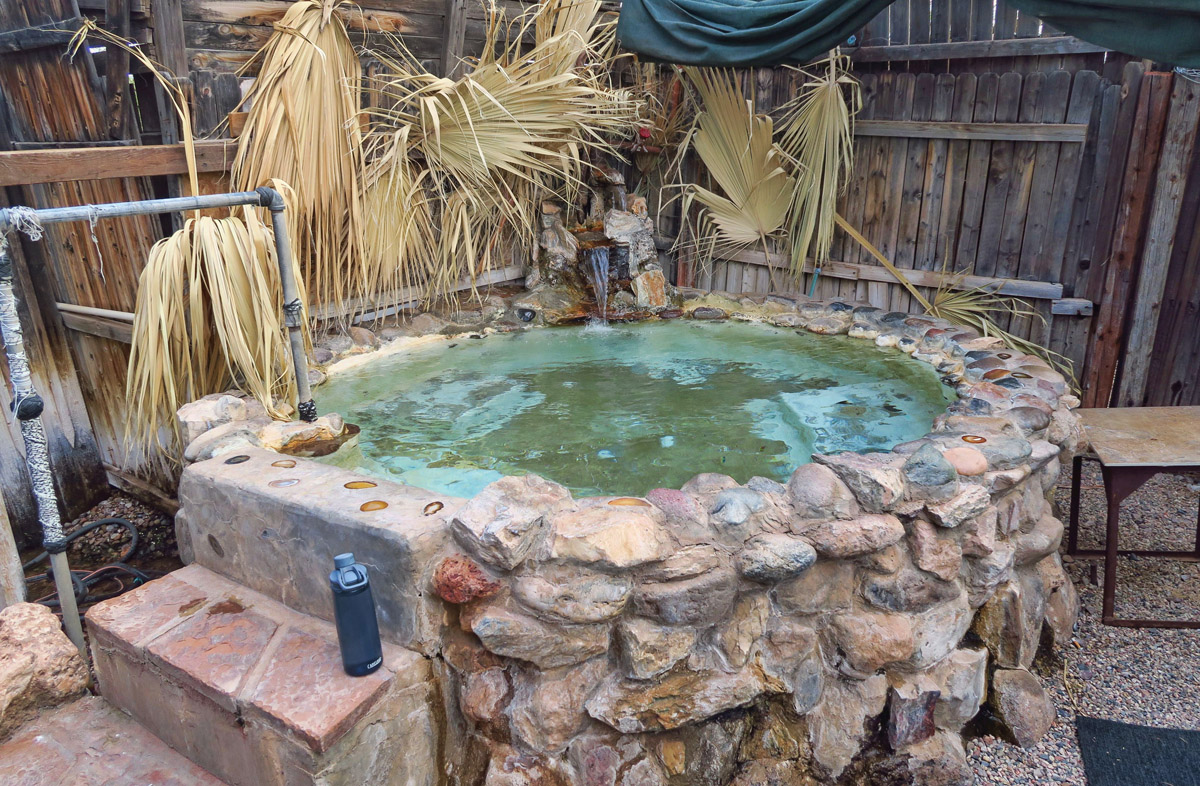 I brake for hot springs…

Nature abhors a vacuum, so stopping the blog did not stop the social media addiction.  Instead, I filled that gap with hours on mind controlling Facebook, combing political activist groups reading up on the train wreck of the day, and adding to my growing list of blogs of others going to places I wish I were instead.   I bought myself a Kindle thinking I would read, but I’ve started more books than I’ve finished.  I memorized the nightly line-up on the evening news straight through to the last Late Show.   So time gained from not blogging did not exactly turn into time wisely spent. 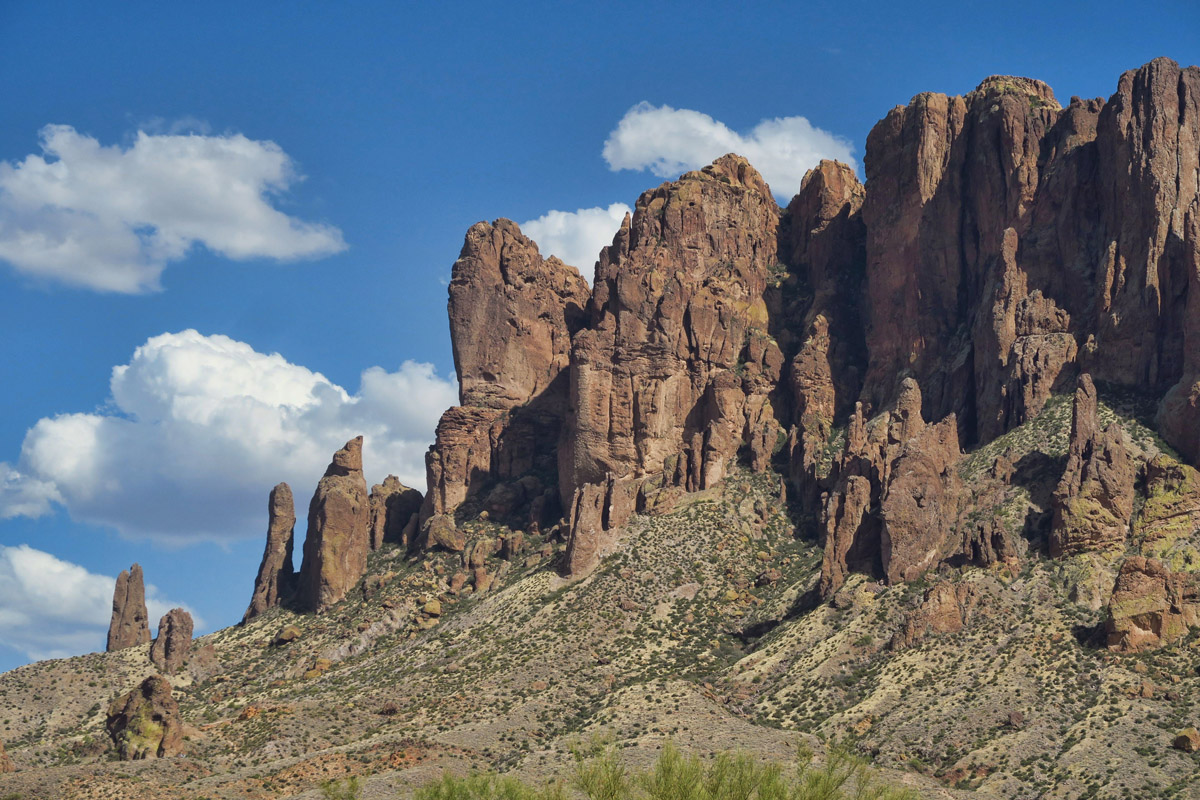 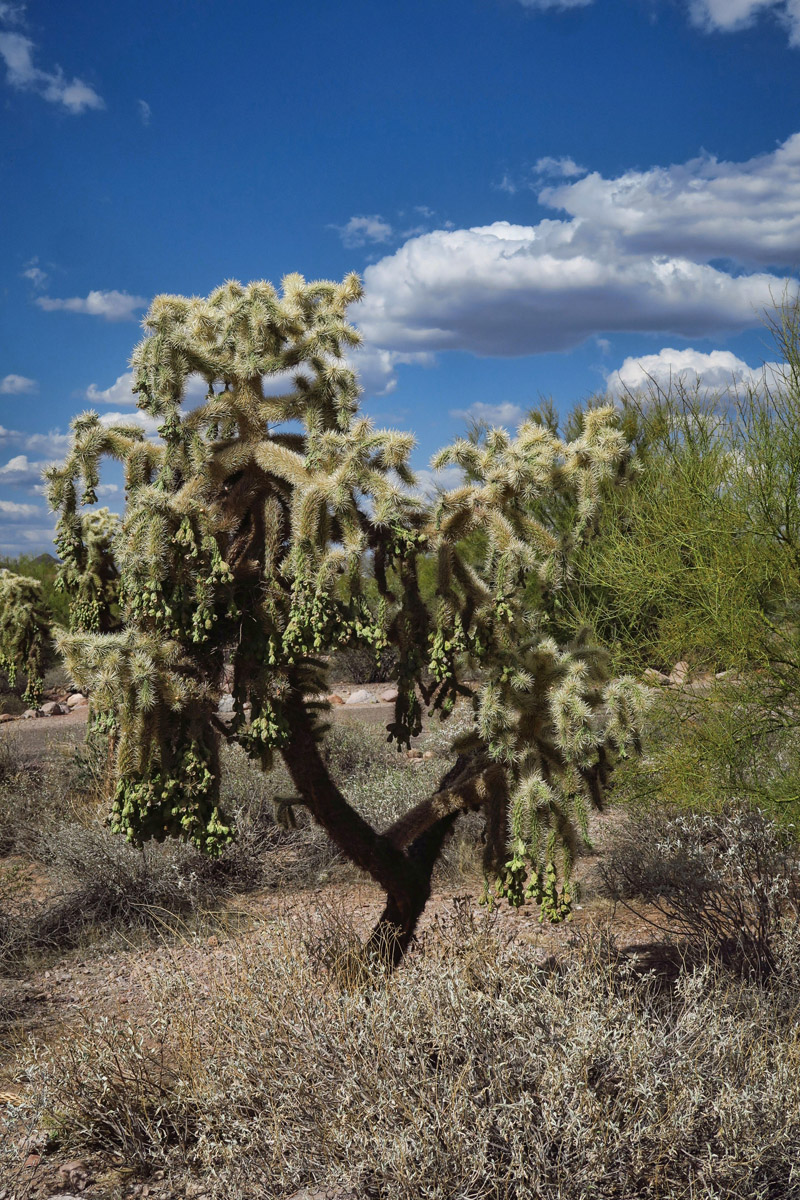 A fine specimen of the chain fruit cholla. 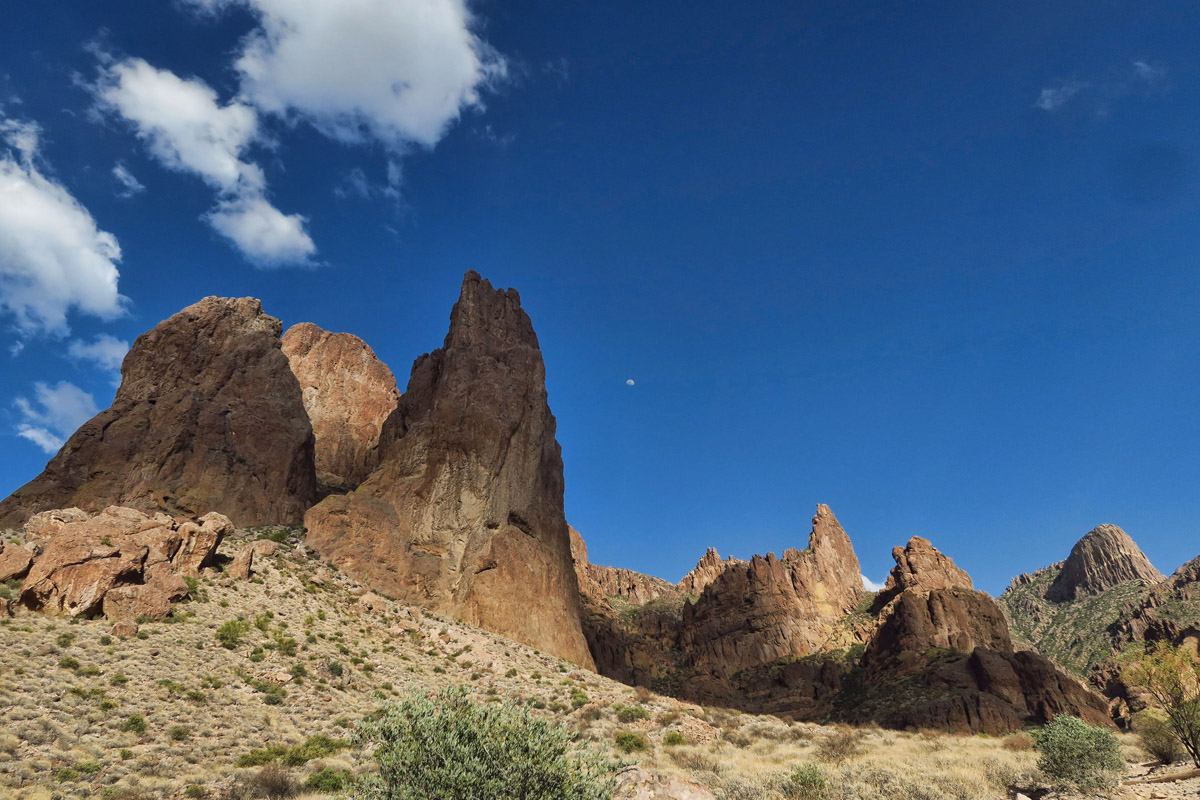 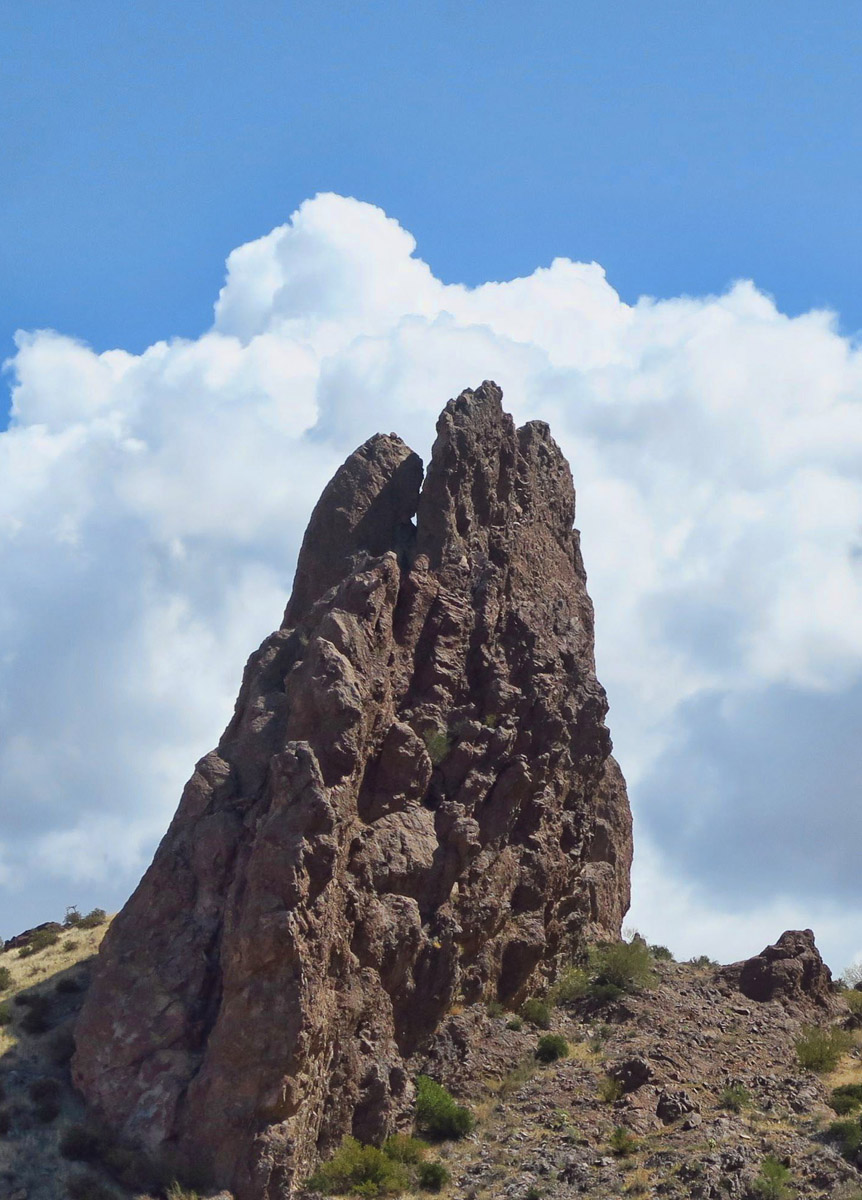 My Winnie View stayed parked on the Texas farm just one week shy of five months.  It was a challenging winter.    Winds where the number of mph exceeded those on the temperature gauge made for some brutally cold nights and blustery days as the Winnie shook from the wind, and I shook hoping my winterization technique had been sufficient.  And then the record setting rains came, necessitating wading boots just to get from the Winnie to the house.   In weather like that, I can barely find the motivation to write a check, much less a blog post. 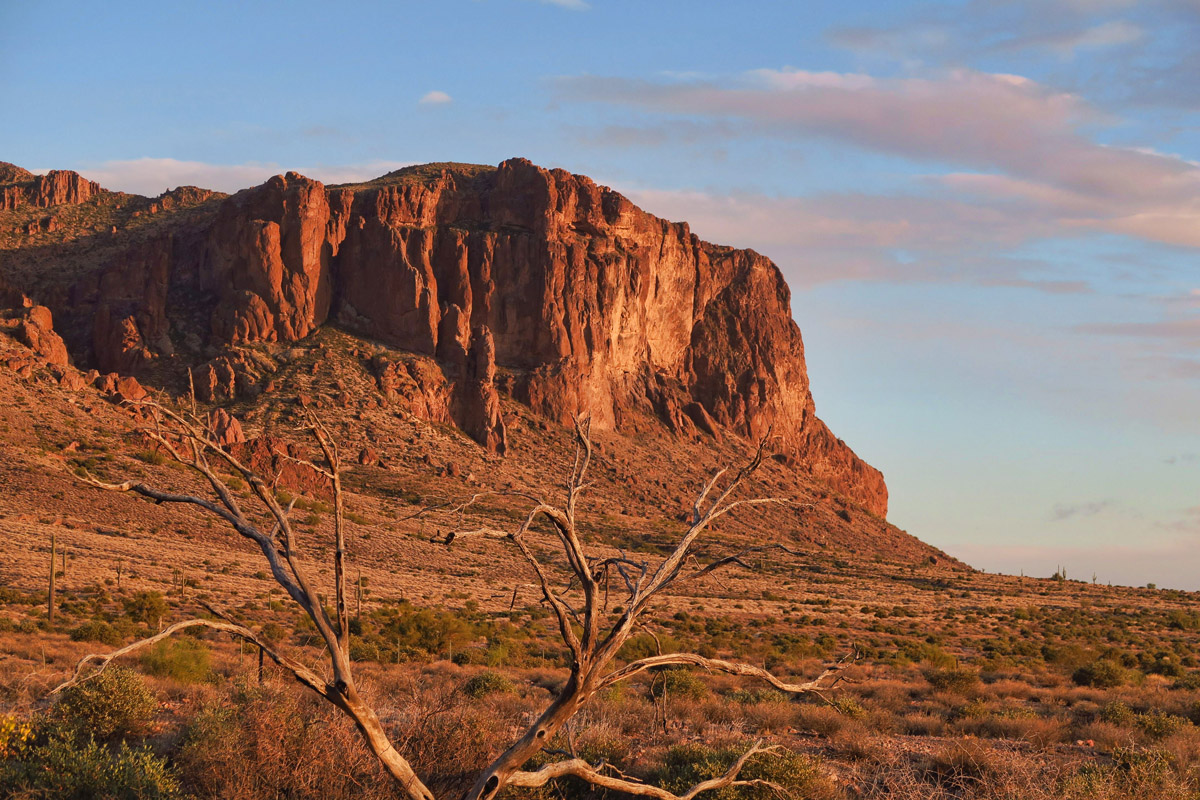 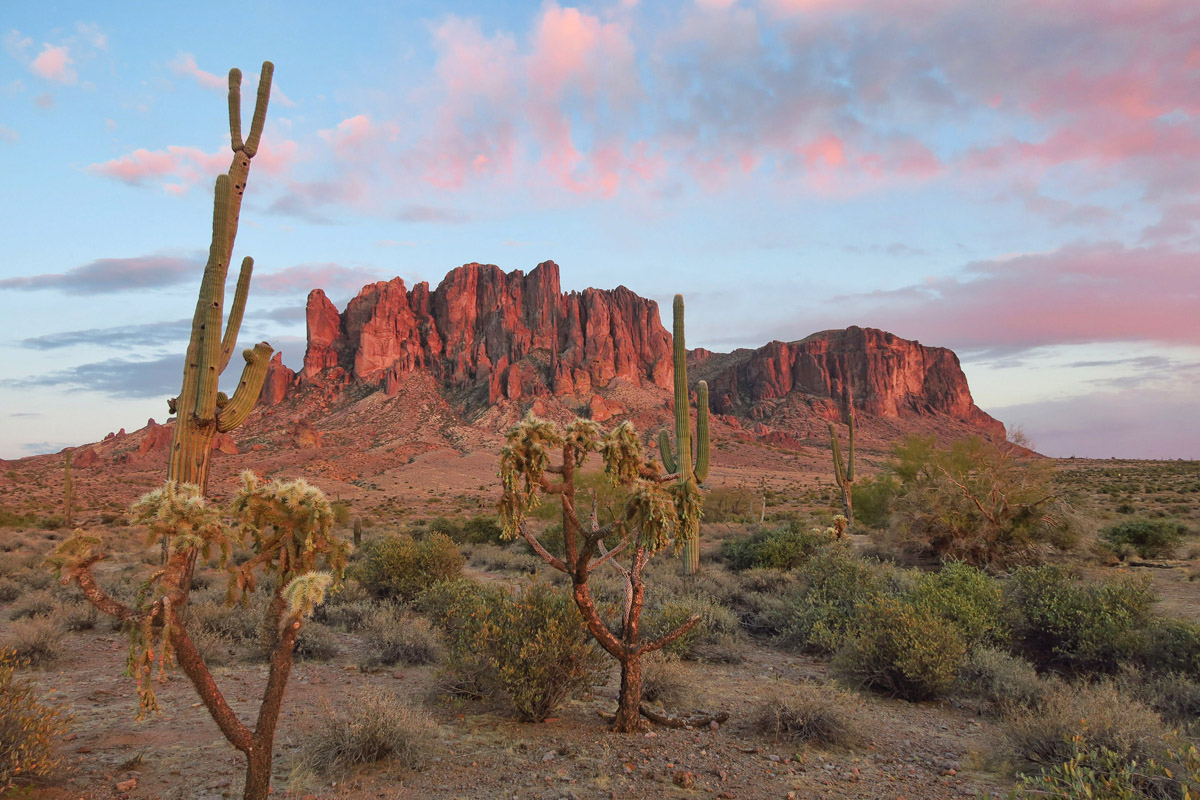 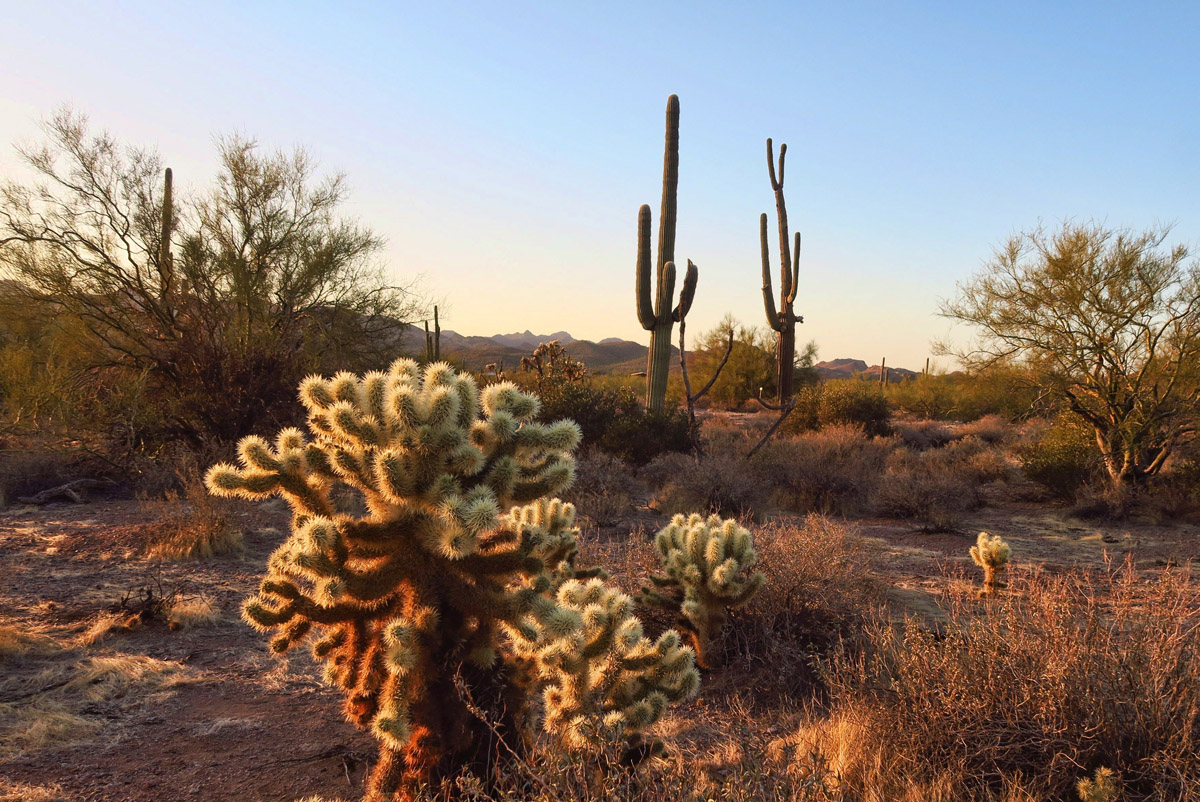 Back lighting of the sun makes the cholla glow…

Mom got a bad bout of pneumonia just before Christmas and spent seven stressful days in the hospital.  She came out with more problems than she had when she went in, as steroids caused hallucinations and staff caused restless nights.  A phantom doctor came in the middle of the night with an erroneous diagnosis of kidney failure.   Was he in the wrong room?  We’ll never know.  But tests and treatments continued round the clock, night and day, when all she really needed was rest. 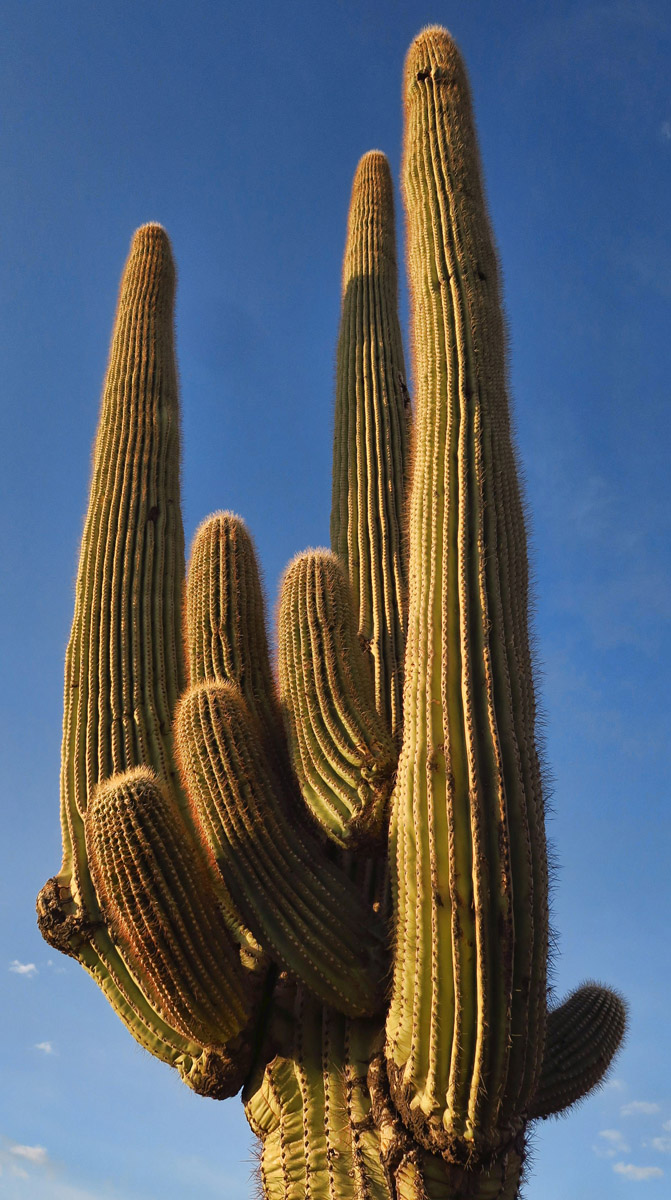 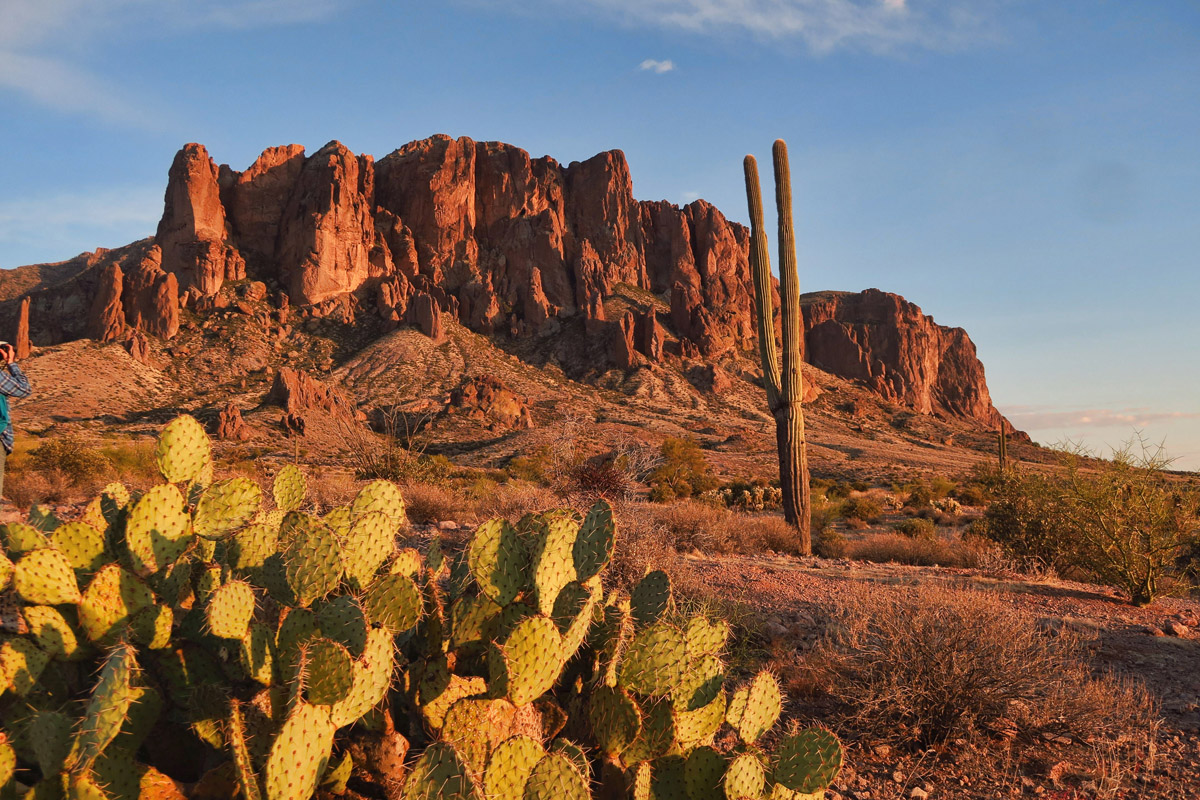 Sunset over the Superstitions 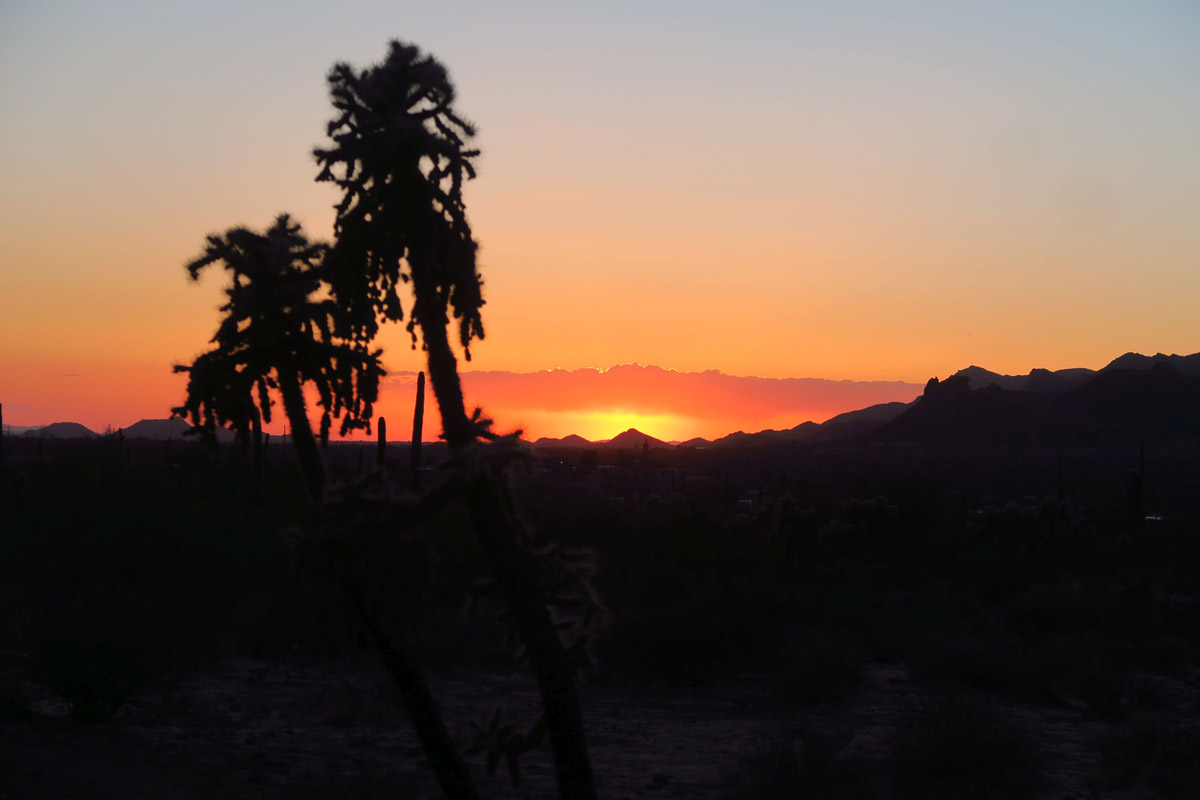 As Mom got her wind back, the Winnie seemed to “catch cold.”   New tires led to failing valve stems.  The routine 70K mile service led to new brakes.  The Tracker rag top began to leak while the brakes began to squeak.   And then there was the tow bar replacement from the failure I had in Oklahoma last October.  I stopped adding up the cost of getting back on the road when I hit three grand.   But still, the Winnie remains both the most economical house I’ve ever lived in, as well as the most comfortable, so I should hardly complain. 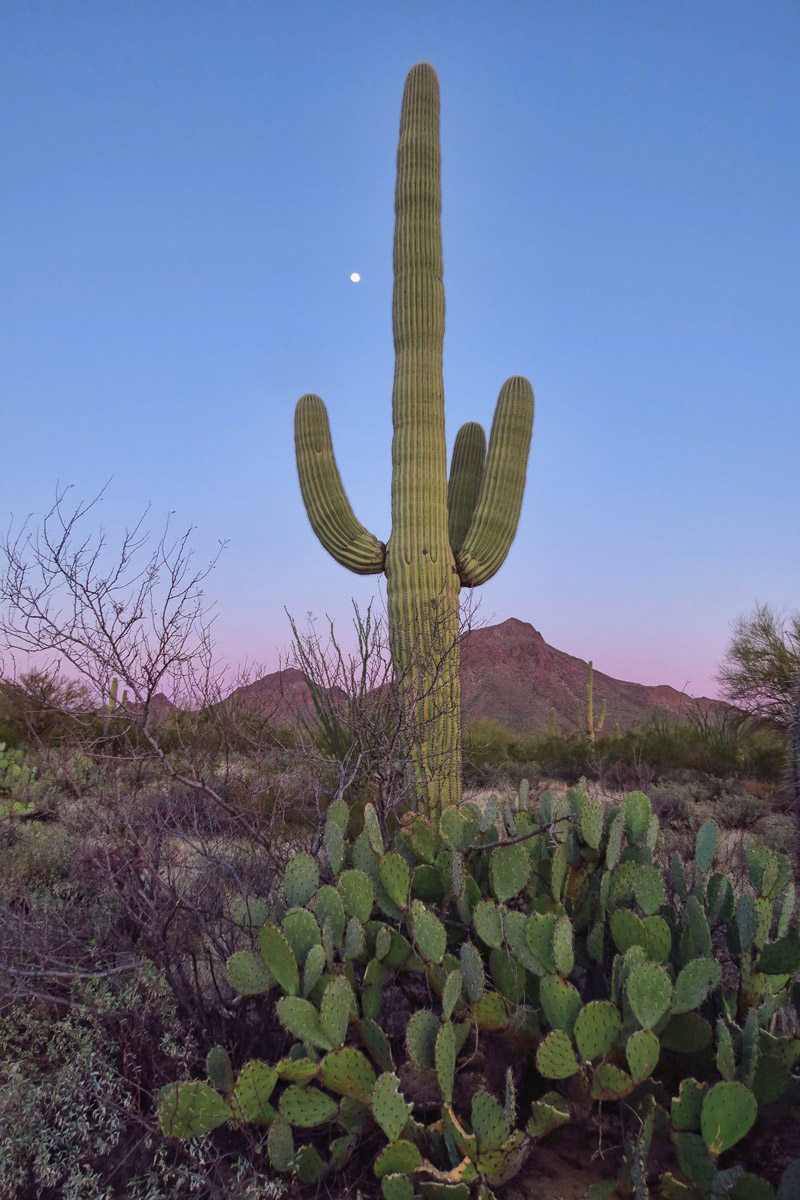 I adore the full moon, so I signed up for the ranger-led Sunset/Moonrise hike in Saguaro National Park. 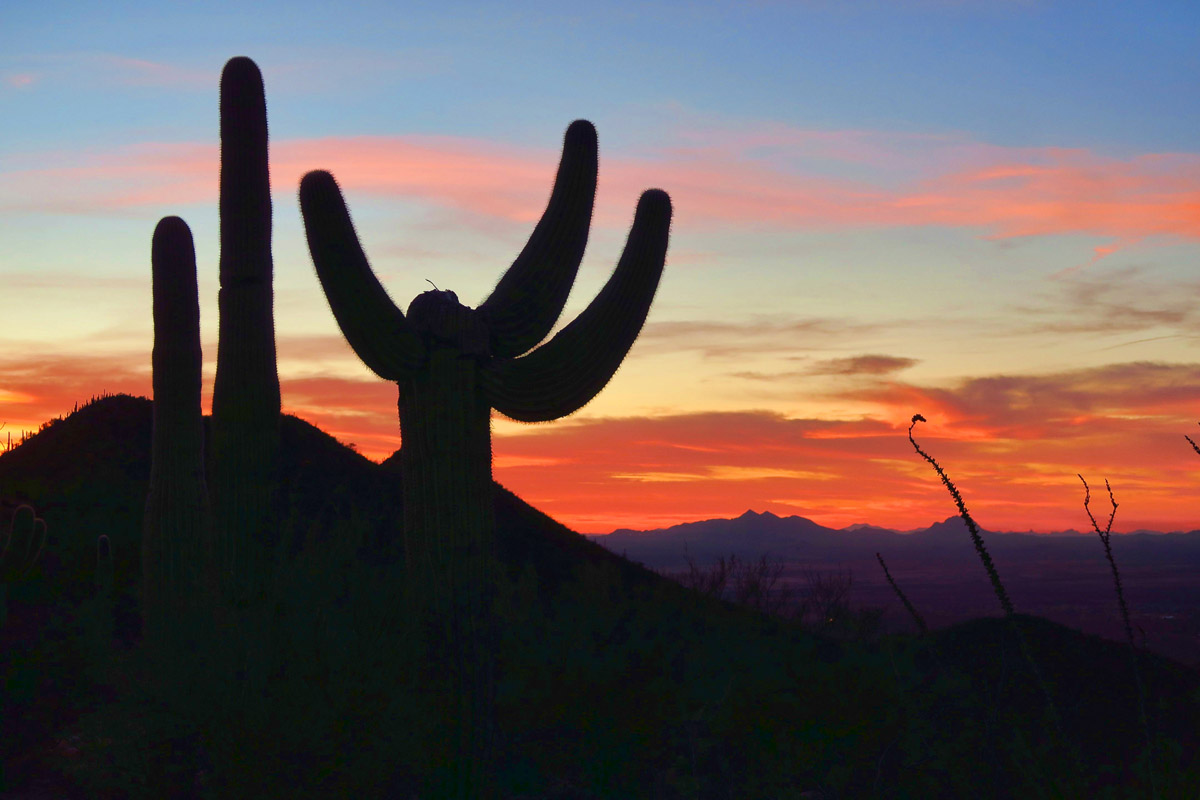 Another day at the office for the NPS staff… 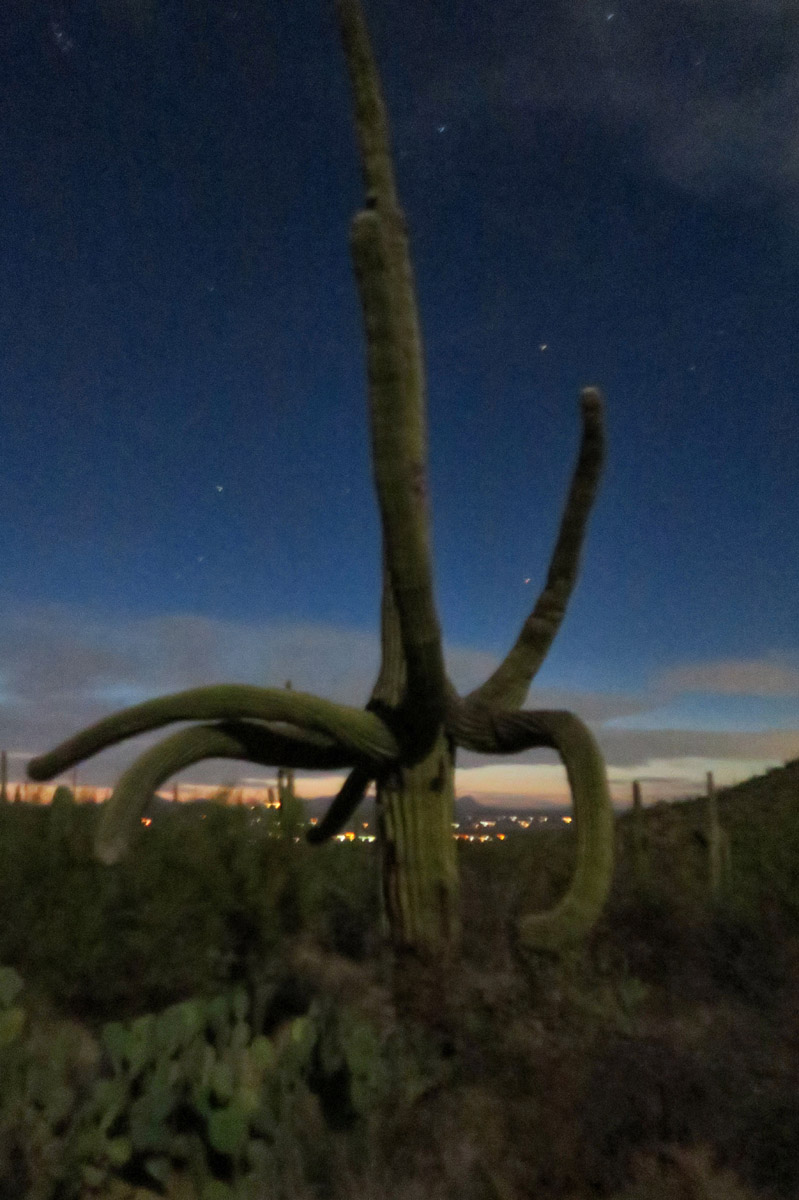 Seems as if he is dropping his arms to rest in the cool nighttime desert air. 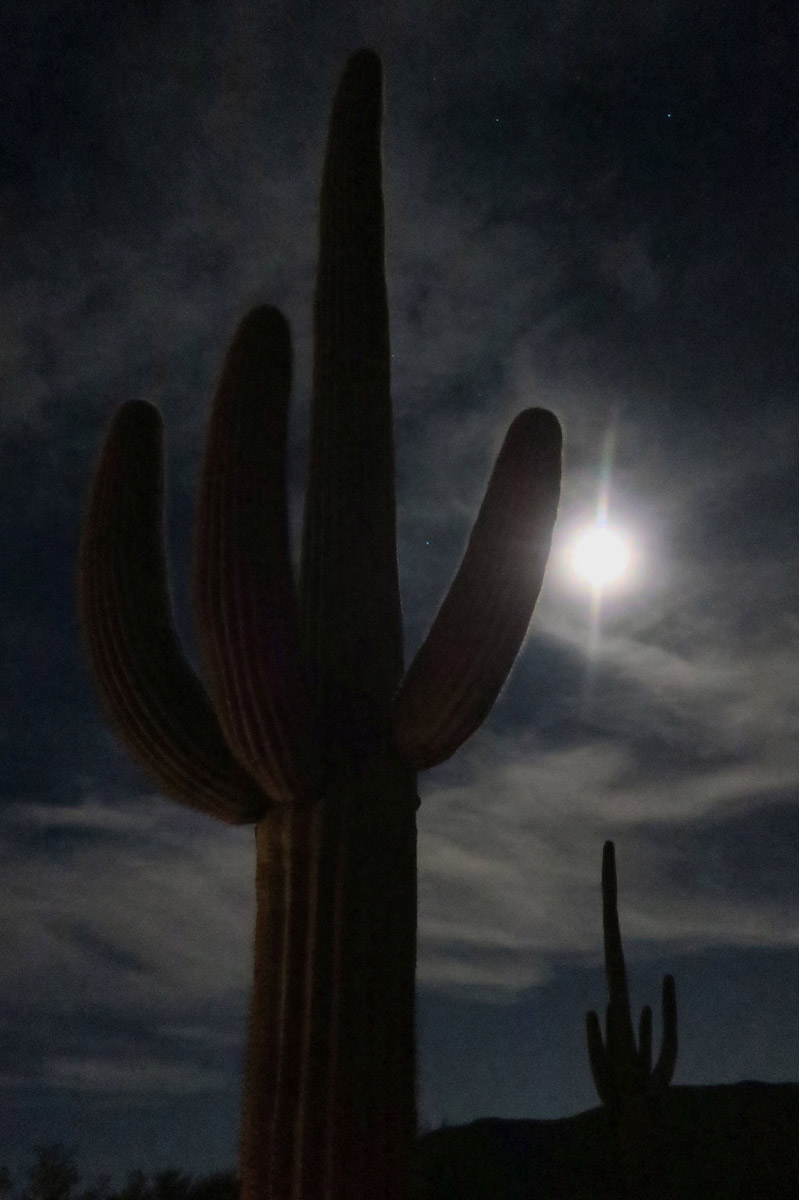 “Blue moon, You saw me standing alone, Without a dream in my heart, Without a love of my own…”

So to all the friends and family who wrote kind notes of encouragement or concern over my five month hiatus, I thank you.  Your newsworthy updates, kind words, compassionate stories, or just a simple note to say “miss you” helped to brighten my day in a place where family is my only outlet. 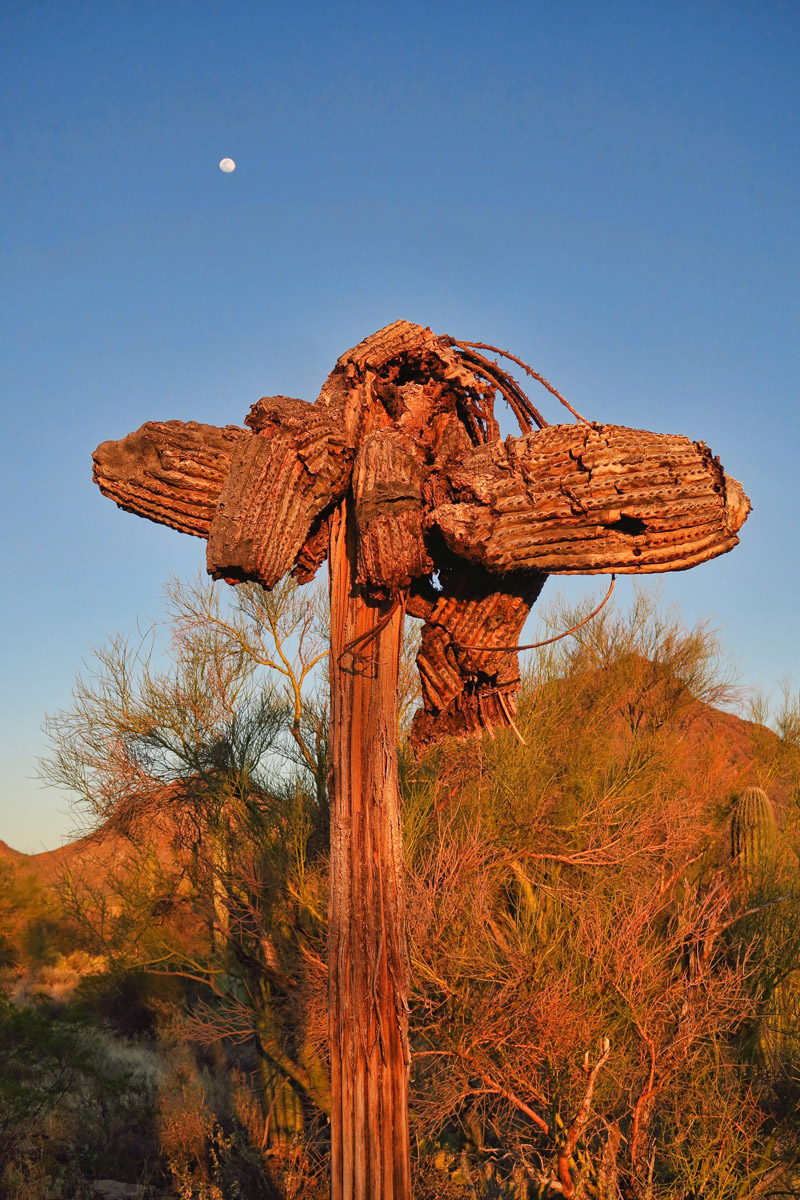 Just in time for Easter. 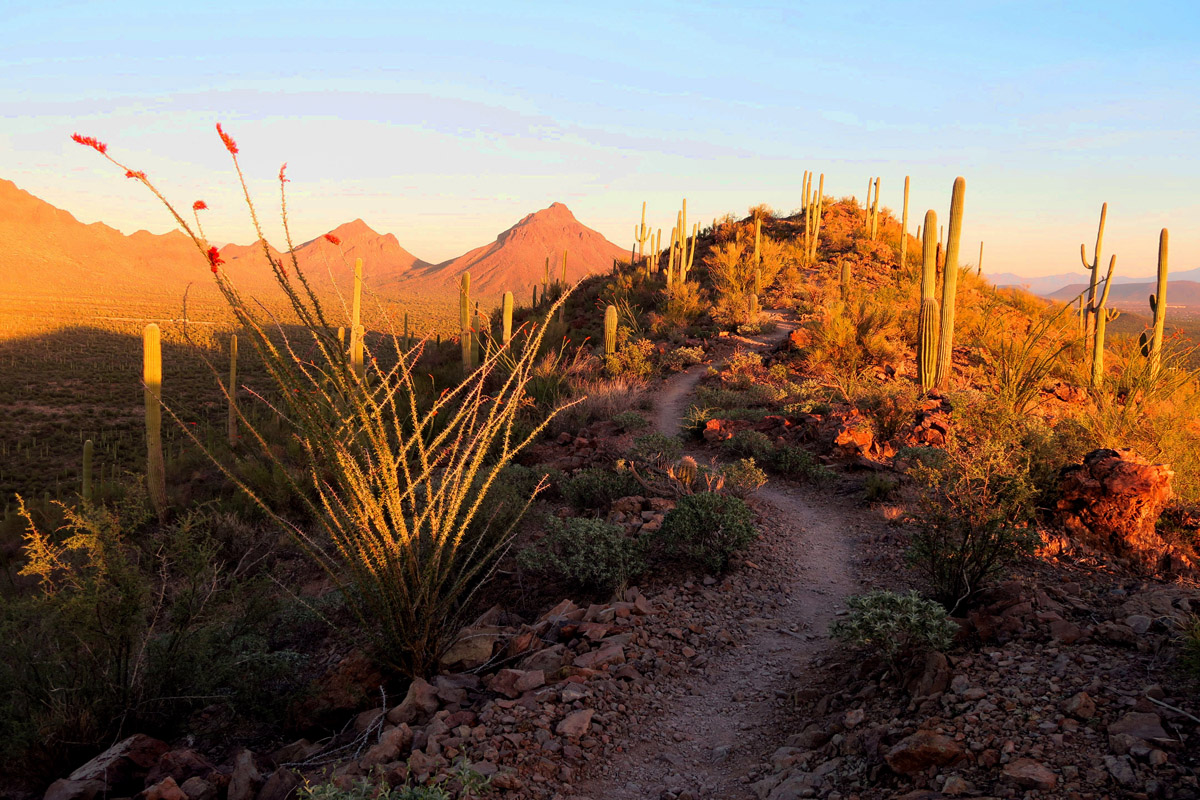 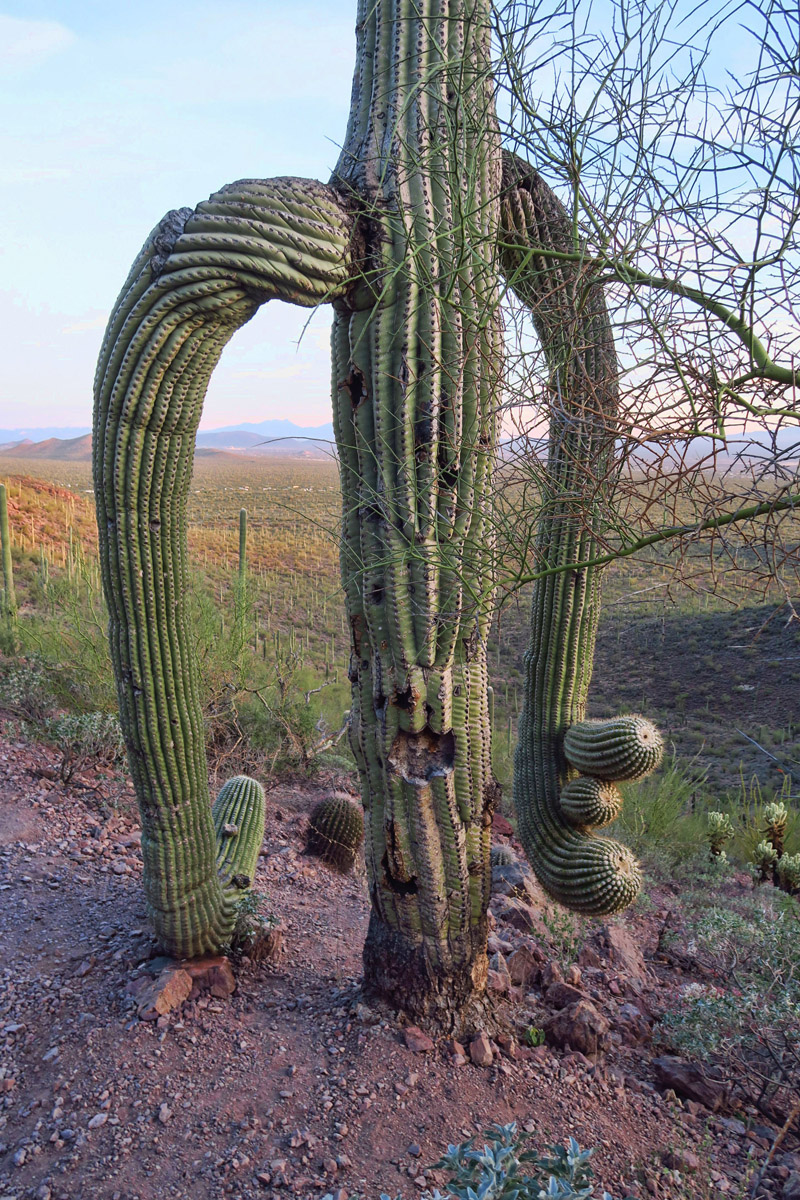 I am finally back on the road in southern Arizona, late to the desert party.   But the one thing I missed while spending 2017 back east was the desert southwest.    Many times, I longed for the cool, still nights and warm sunny days, the orange and purple painted sunsets, the high wispy clouds and the wide open boondocking spots. 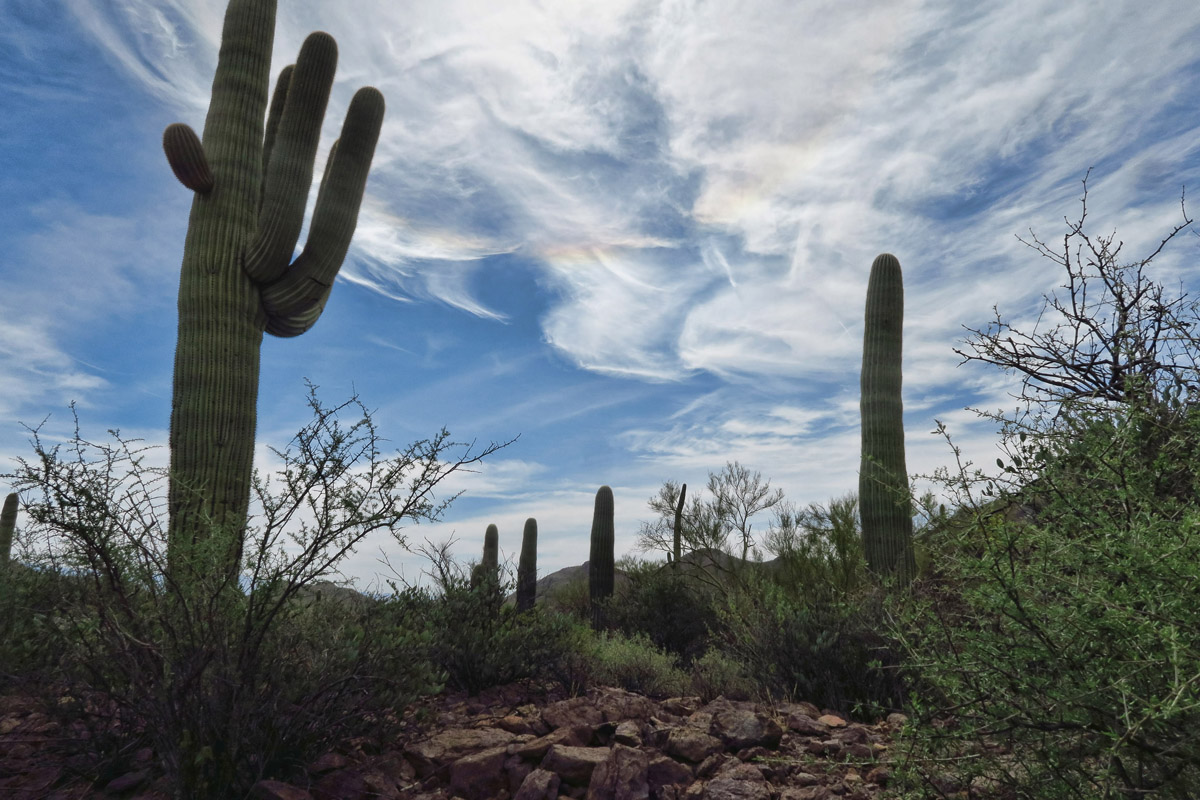 In the desert southwest, the sky is often the main attraction. 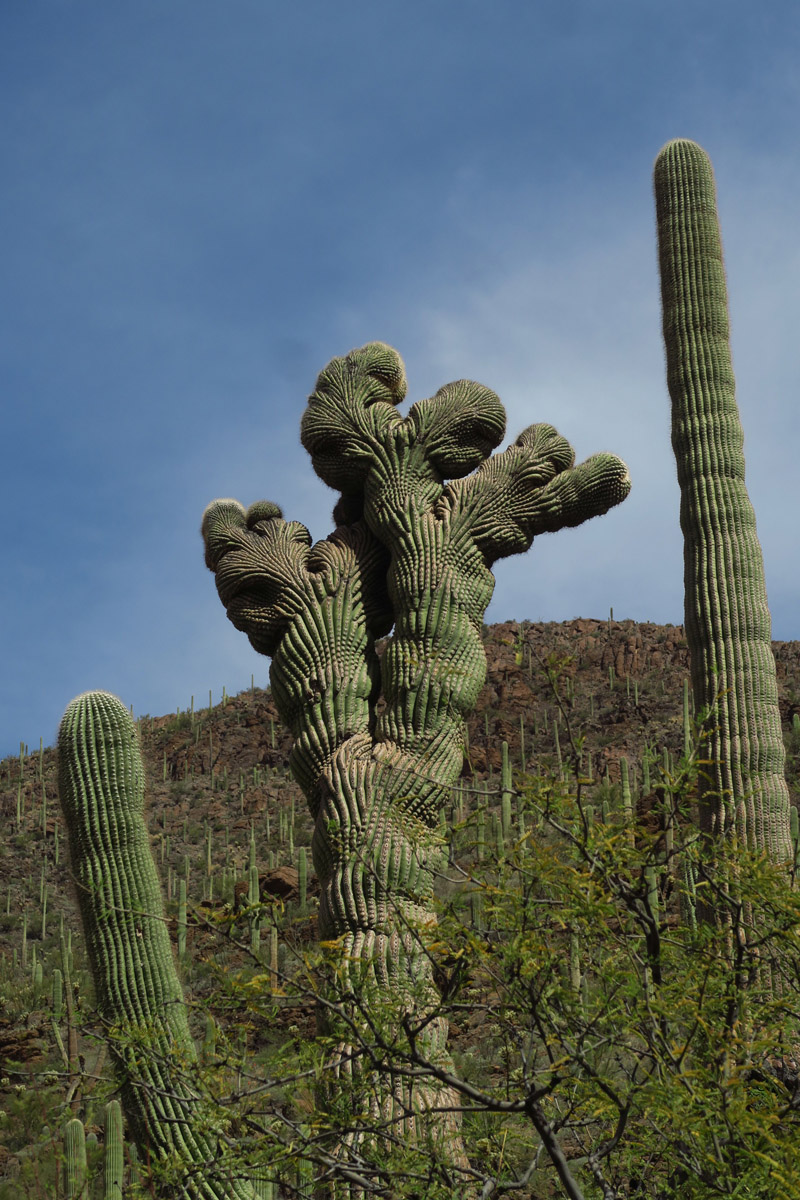 I recently downloaded the “Hiking Project” app. I like it because it often will have a “gem” noted along the trail, like this crested saguaro. 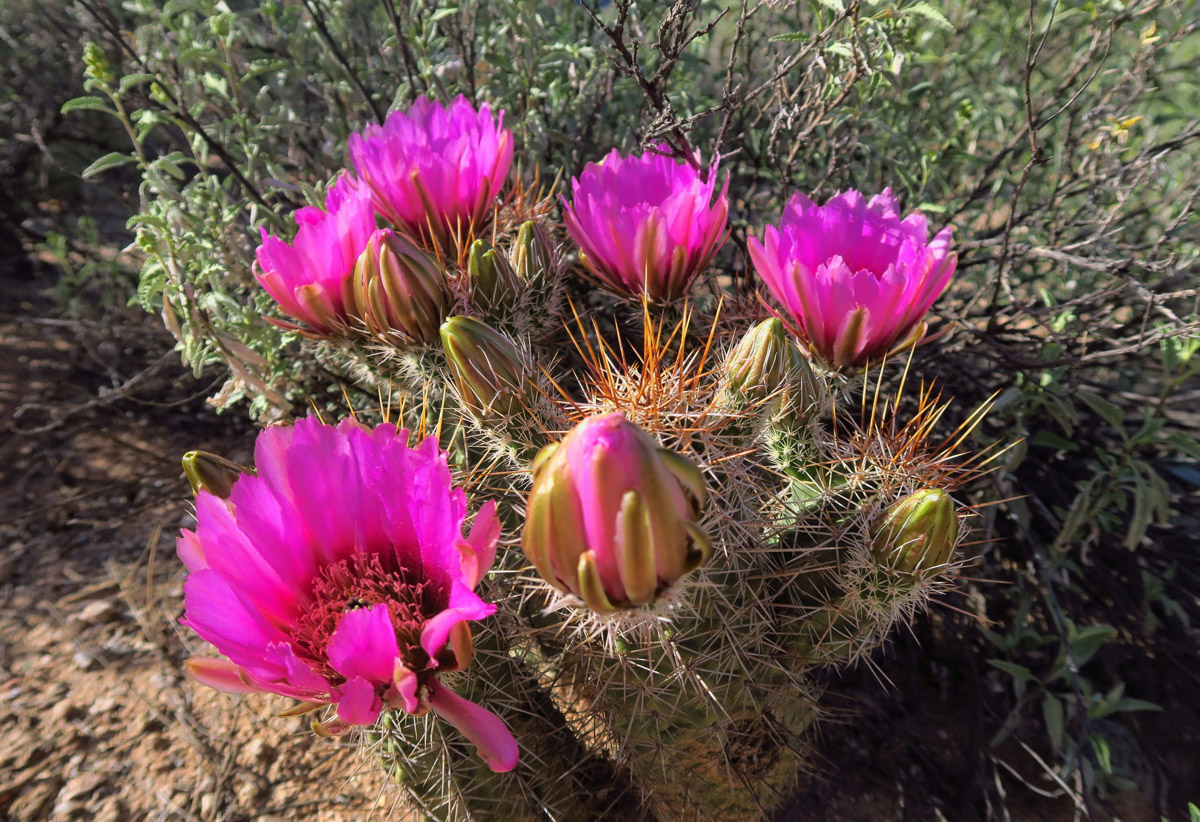 I never get tired of studying nature’s work of art at the end of a hedgehog cactus. 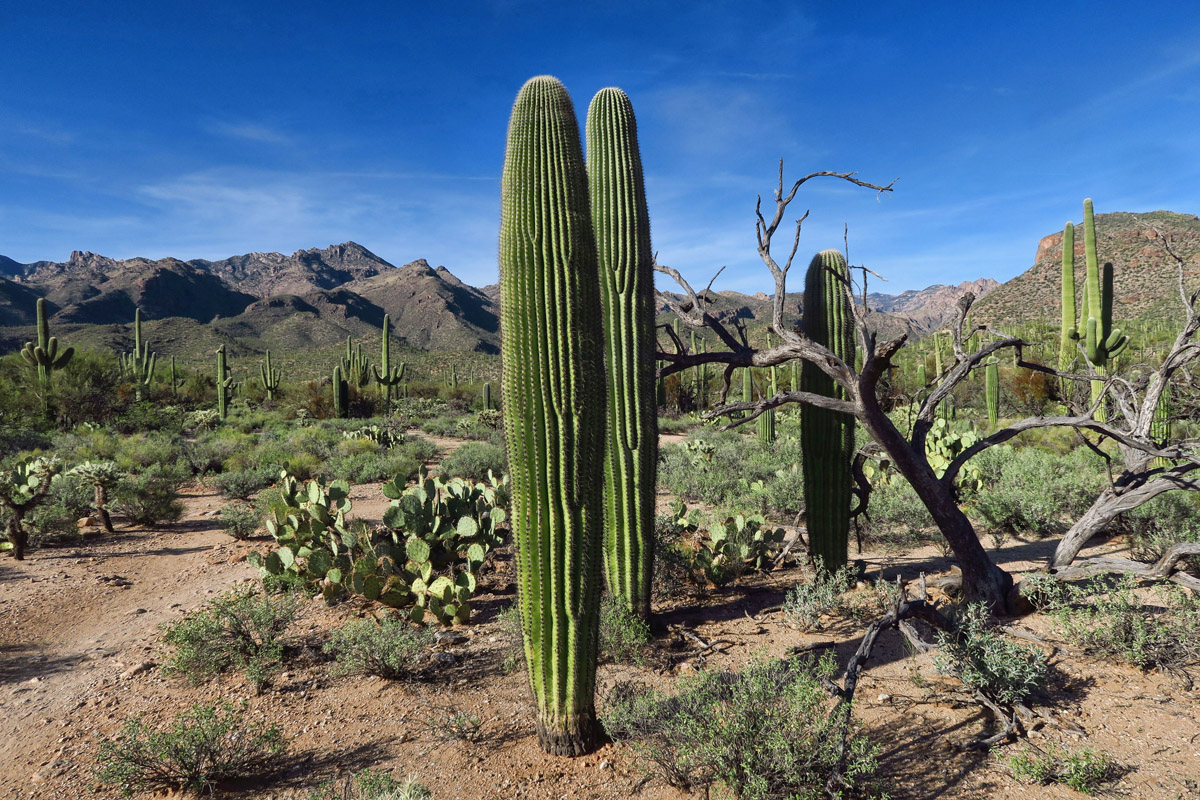 I thought I wouldn’t blog again because I had run out of things to say.  What words could I sum up to describe the desert sky that I haven’t already written?   How many ways can one describe a stately slim saguaro defying all odds by supporting those long spindly arms?  Or the long shadows of the full moon the saguaro silhouette casts across the desert floor? 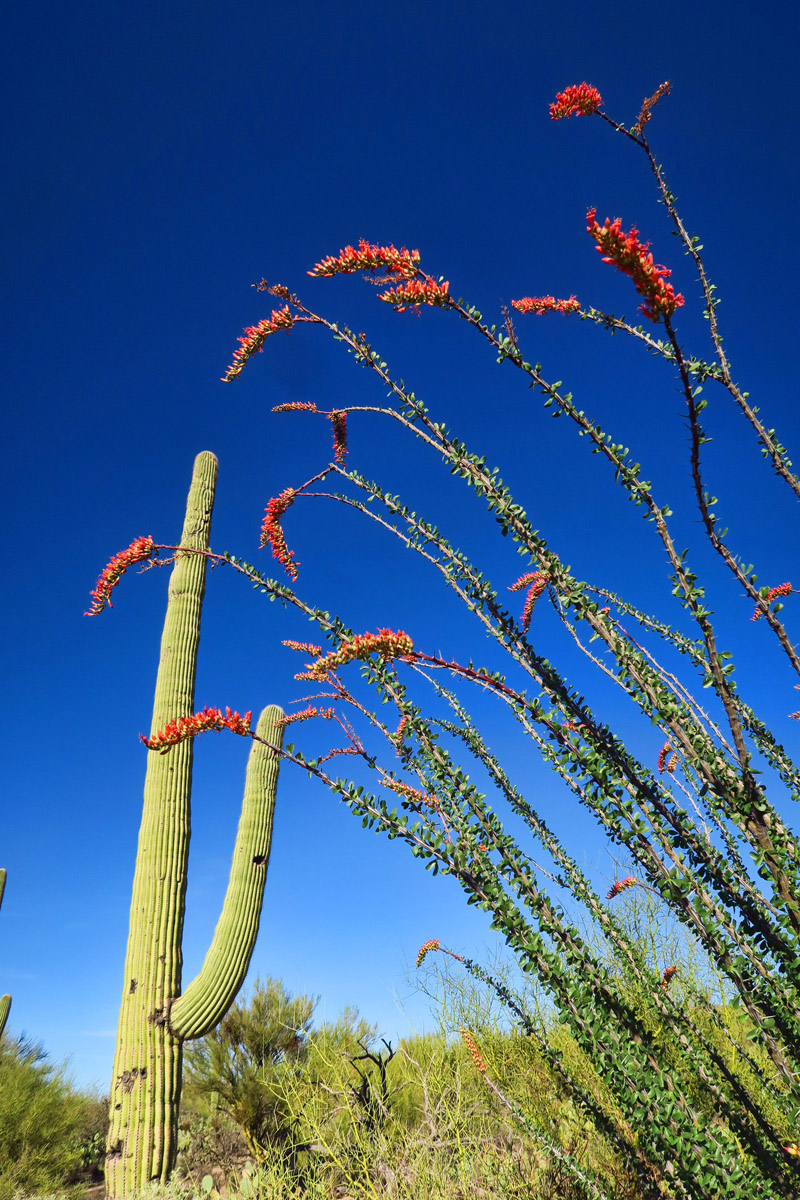 Blooming ocotillo in my back yard… 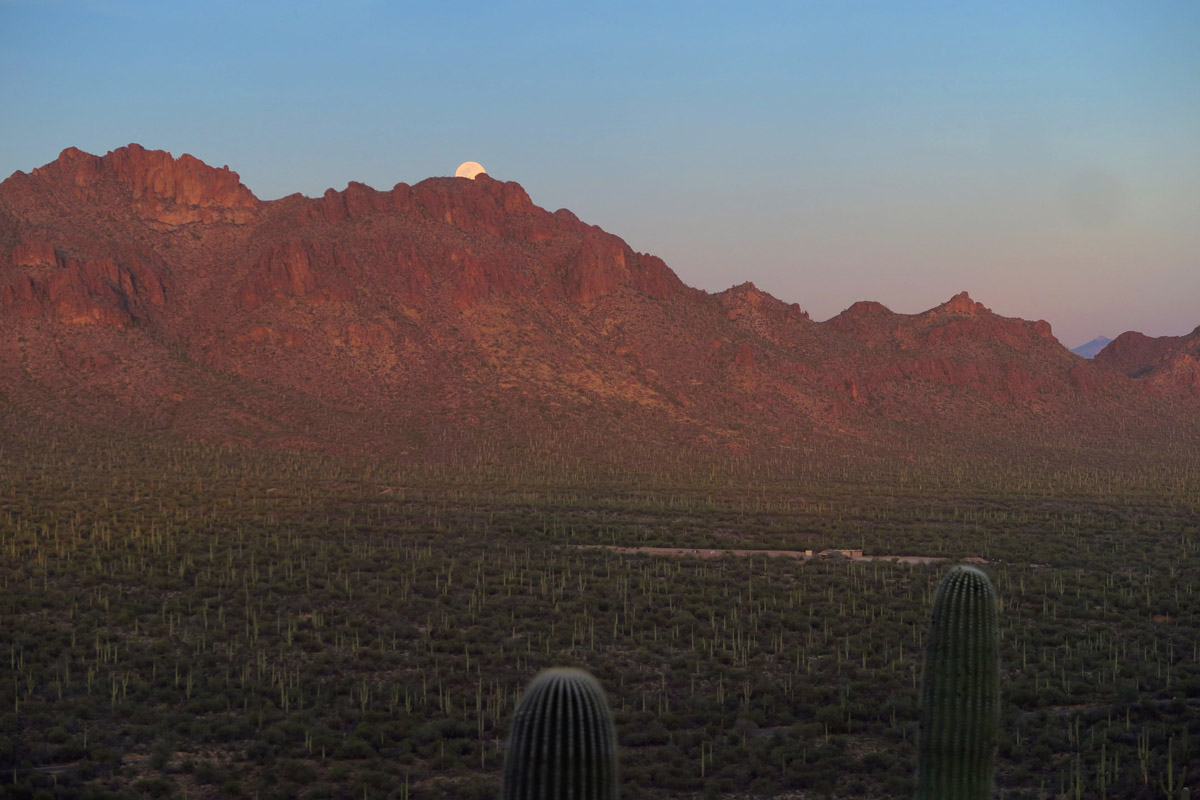 Waiting on the Blue Moon, peaking over the mountain… 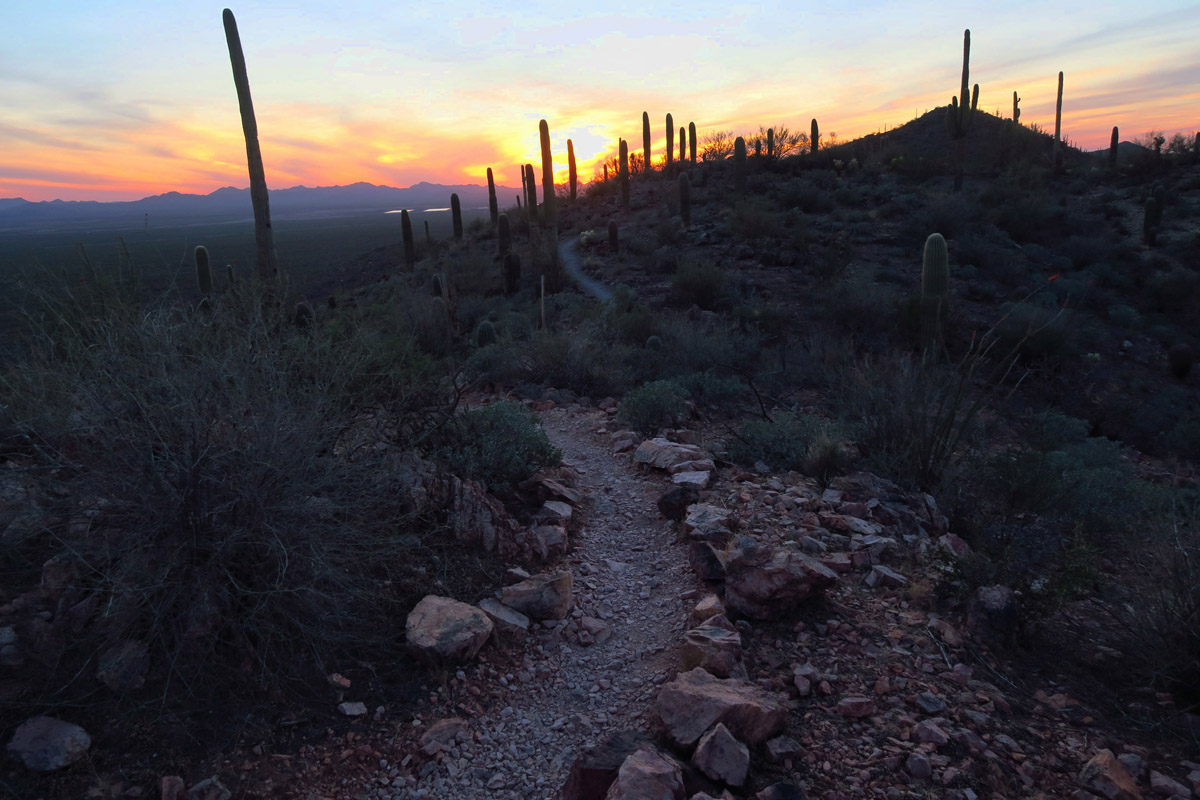 …while the sun drops behind me. 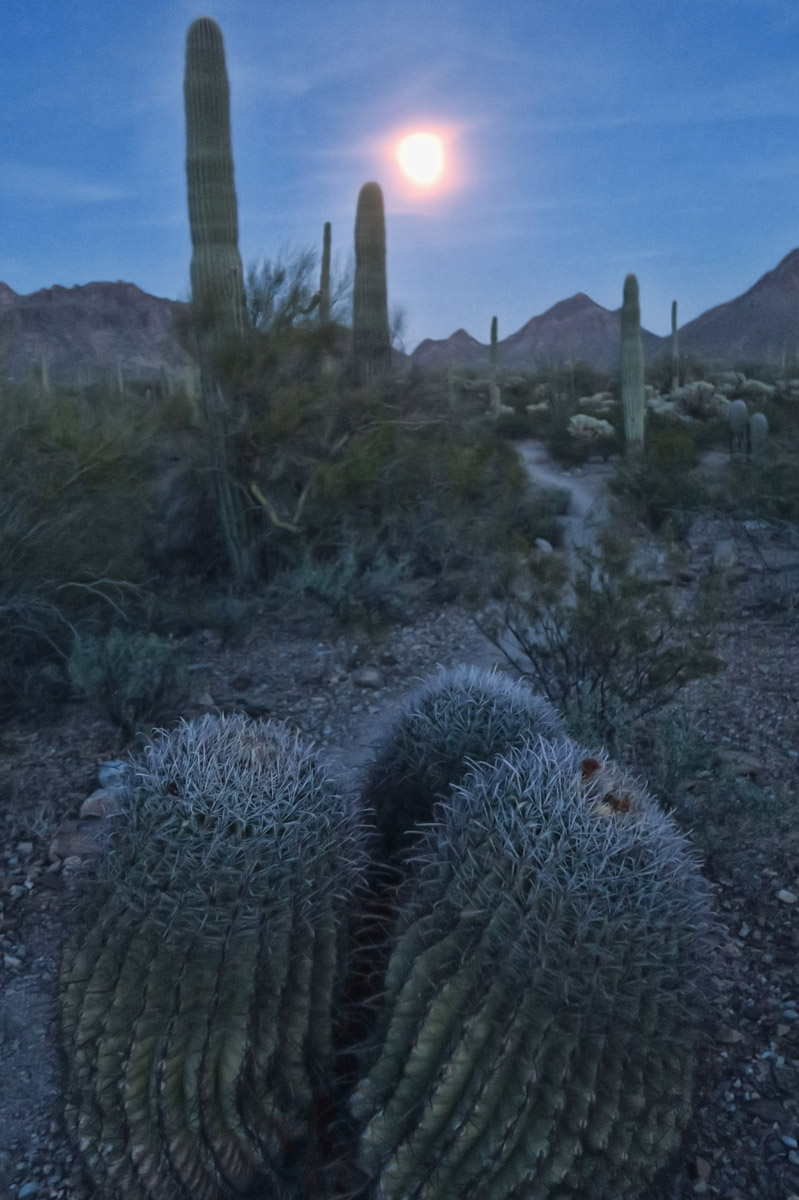 But sometimes the stark beauty of the open sky, or the feathery fuchsia bloom at the end of an unlikely inhospitable host is so inspiring that it makes it impossible not to pull out the camera for just one more photo…even when it seems like the same photo over and over again. And what’s the use in feeling inspired by the view if there is no place to share it?

So here I am again…driven by the View. 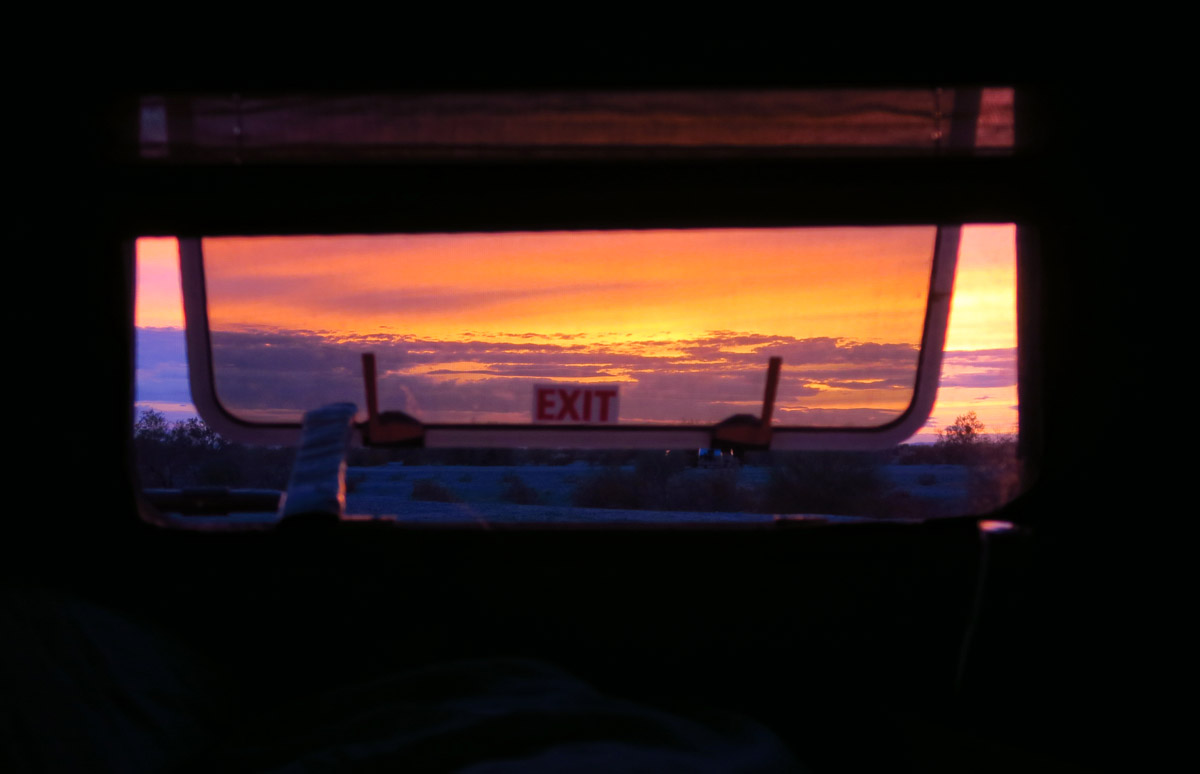 “Preserve your memories…they’re all that’s left you.”  ~ Simon and Garfunkel

64 thoughts on “Driven by the View”